“The benches filled with famous men


Who fell to with relish; round upon round 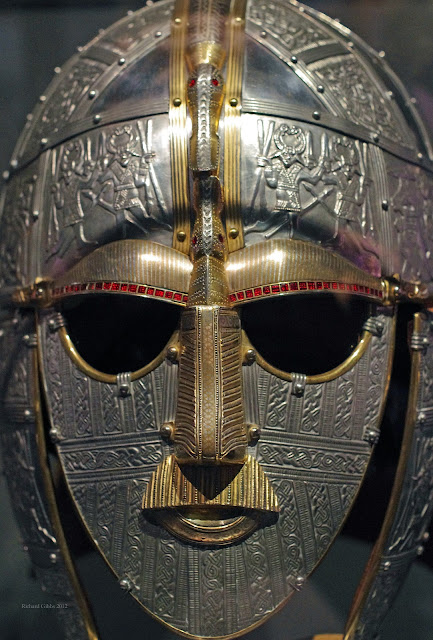 What could be more English?  Driving round the M25 in something like Brown Windsor soup at the tail end of December.  Spray and darkness combining to reduce visibility to the brake lights of the vehicle in front; the sky like a plaster ceiling about to collapse under the weight of an over-flowing bath above.


And for what?  A holiday?  A trip to the seaside?  Surely this is as daft as it gets?  When the sapient majority is either on the beach at Sharm el Sheik or watching Match of the Day or The Great British Bake Off at home, why submit to the perils of aquaplaning into a traffic tsunami?


Well, for one, we are “British.”  And two, I have been reading Beowulf…… And, if I need a third, I am looking for “Merrie ” in the depth of winter - and not a Pickwickian snowscape neither, no twirling on pigs’ bones across the frozen , nor too-hot-to-handle chestnuts to warm the cockles…. 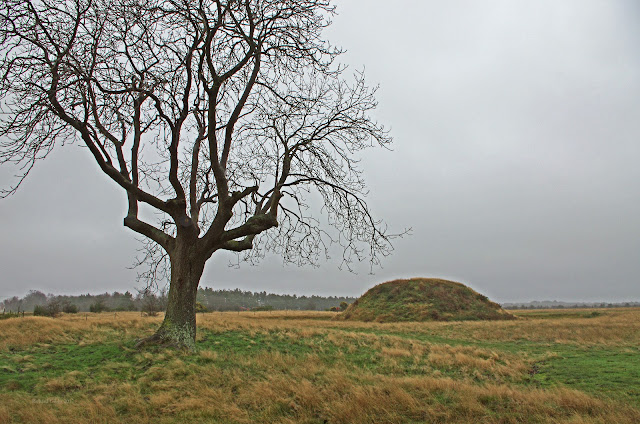 First, into the past.  High above the swollen Deben estuary, across the water from the of , in .  It’s cold, and damp and deserted, but for some 1300 years here lay a remarkable man, buried with his ship and an unsurpassed collection of finery.  This is Sutton Hoo, and here we can taste the strands that formed the weft that became woven into . 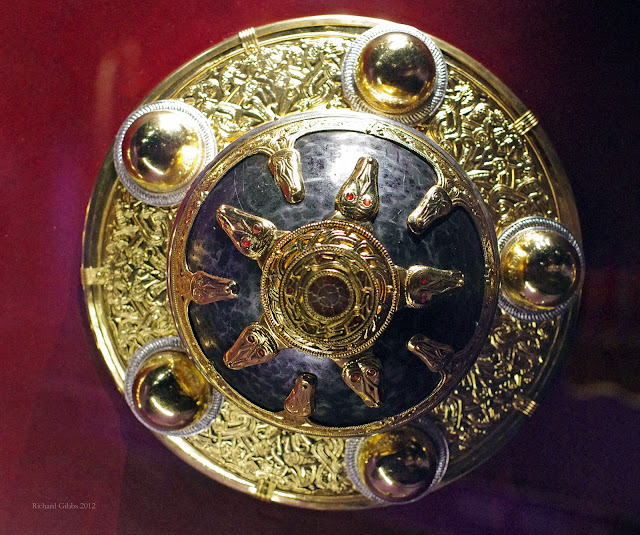 The site would have been inhabited since the Stone Age, and was undoubtedly known to the Romans, whose roads passed nearby, but by the year 625AD the Romans had been gone for two hundred years, and a new power was developing, which would form the basis of the culture of this land, ready for the layering of invasion, religion and trade that added colour and texture over the centuries.


The treasures that were buried here, with their historical and cultural values, were undiscovered until the owner of the land, Mrs E M Pretty, invited the archaeologist Basil Brown to open the mysterious mounds in 1938.  What he found, among other things, was the remains of a twenty-seven metre long ship, and when Charles Philips took over in 1939 silver and gold, enamels and jewels came to light, brilliant examples of Anglo-Saxon and Celtic art, as well as objects of everyday life, such as textiles, utensils and weapons.  An ornate helmet, seeming to frame a pair of raybans; a sword that was beaten from twisted threads of steel, manufactured with the greatest technological skill; a lyre which would have been plucked in accompaniment to songs of war and peace; a shield, embossed with golden animals whose eyes shine red with garnets, and a whetstone carved from one of the hardest stones known to man, topped with a stag finial, possibly used as a sceptre to denote the rank of a king. 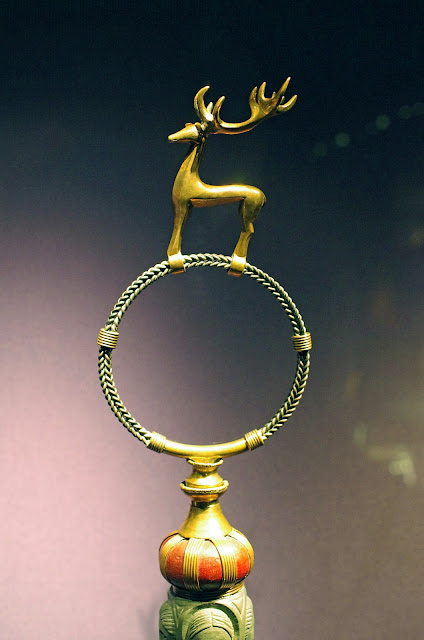 After the Second World War the began a research programme and gradually the discoveries were analysed and understanding grew.  In 2002 the site was opened to the public, and, although the actual artefacts are in , it is fascinating and atmospheric, even in the gloom of December.  There is a glory about this celebration of death, as it celebrates life, and through the patience of those involved the continuity of our past becomes more tangible, more relevant, and I suppose I can feel more purpose in a society which valued art, and which cared for the dead as if they live on.  We view a short film about the site and the world it explores, and while we are visiting a guide expounds on the traditions of feasting in those dark days.  It fits with Beowulf, as retold by Seamus Heaney:


“They sang then and played to please the hero,


Words and music for their warrior prince,


Harp tunes and tales of adventure:


There were high times on the hall benches…..”


There is the Janus effect.  We look backwards and we look forwards.  At this pivotal point of the year, with the darkest days behind, our hopes rekindle, but they are hopes built on experience.  So the marvels buried at Sutton Hoo inform our future: if this is how it was, then why should it not be better? 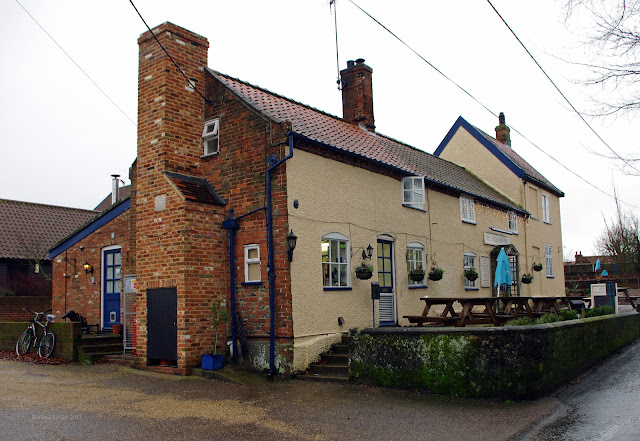 We return to the present, and move on to our accommodation, at the quaintly (and inexplicably, though it may derive from a local type of eel trap) named Eel’s Foot Inn at Eastbridge.  From here it is a pleasant, if waterlogged, walk to the RSPB Reserve at Minsmere, and the coast from Dunwich to Sizewell. 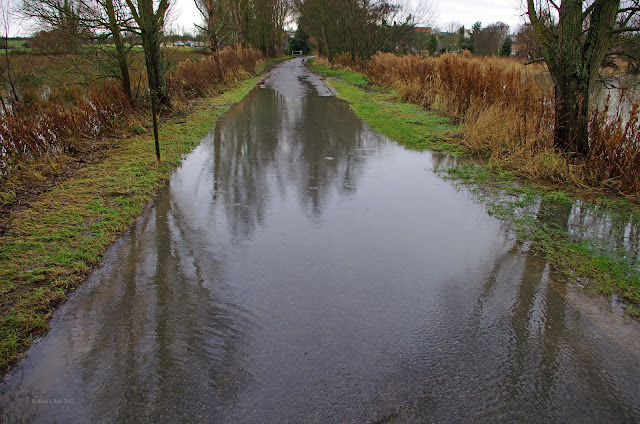 Here, between coastguard cottages and the mosque-like white dome of Sizewell B, birds and animals are protected, at least from man (for the moment, though we do not yet know about Sizewell C!) in reed beds and woods. 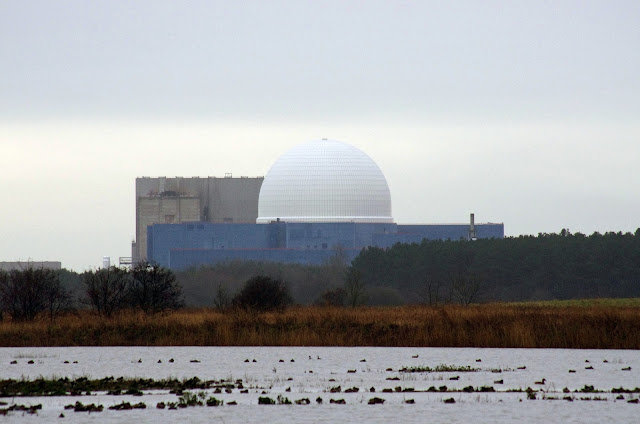 This is one of the RSPB’s flagship reserves, with excellent facilities and a number of hides and walks.  The variety of birds is dazzling and serious birdwatchers will return in all seasons, and there are also Konik ponies and deer to see. 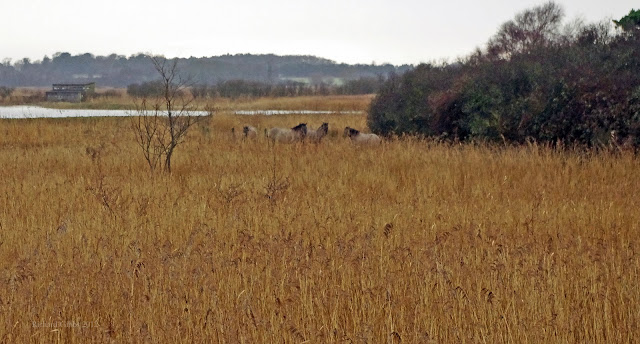 We are fairly lightweight when it comes to identifying distant shapes, but are spellbound by the views from the Island Mere and Bittern Hides.  I just miss seeing an otter (but am shown a picture of it, strangely taken on exactly the same camera and with exactly the same lens as I have) but succeed in counting nine Marsh Harriers circling and settling in the dusk. 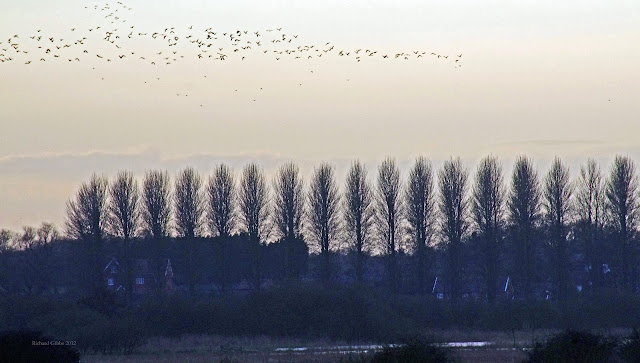 After a grey and washed out day the sun slips below the cloud cover and suddenly illuminates the scene, side-lighting the reeds and silhouetting the bare trees in the distance. 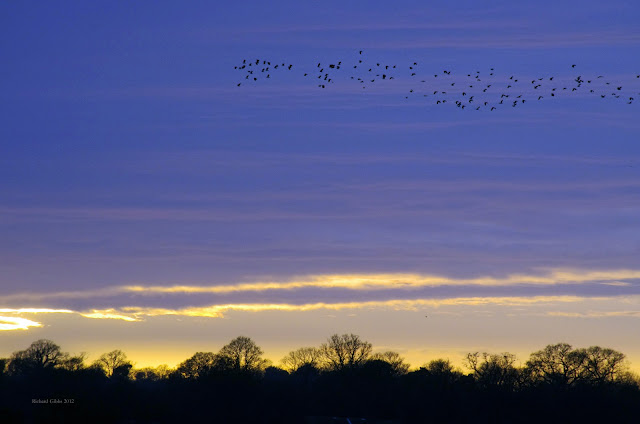 Flights of birds sweep in, dark shapes against the sky. 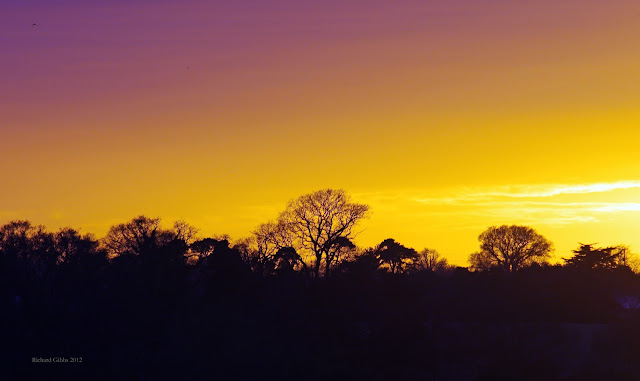 It is glorious, and I suddenly think of the warrior in his boat tomb, the years in between dissolved as time sheers away to nightfall. 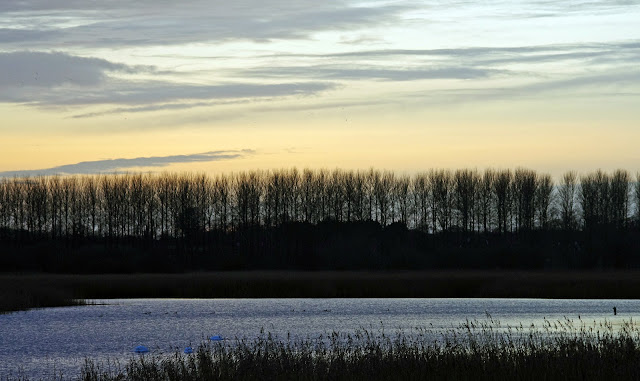 We walk back to the pub.  The road and flooded fields gleaming in the last of the light.  A wood-burner glows warm in the inglenook, and we restore ourselves with homely food and ancient ale.  A gathering of musicians materialises round the fire, and instruments are tuned to the background of harmonious chatter.  Songs begin to flutter in the hall, and I imagine horns of mead passing from friend to friend. The musicians take their turns, and their airs illustrate the intermingling of folk, from a tune by O’Carolan, the eighteenth century Irish harpist and composer, to shanties from the seafaring past; from an a capella rendering of Bob Dylan’s “Boots of Spanish Leather,” which exposes its Celtic origins, to a deftly performed cover of Phil Ochs’s “There But For Fortune,” which was a commercial success for Joan Baez in 1964.  The array of instruments, from bones to accordions, is impressive, as are the individual and combined talents on display.  Ron sings a rousing song about the economic crisis and draws everyone into the chorus:


“Bugger the bankers and politicians


Bugger the bureaucrats too


Bugger the buggers that make up the rules


And if you’re one of them


And we all feel much better for that!  The Geats are in their element!  Grendel is buggered! 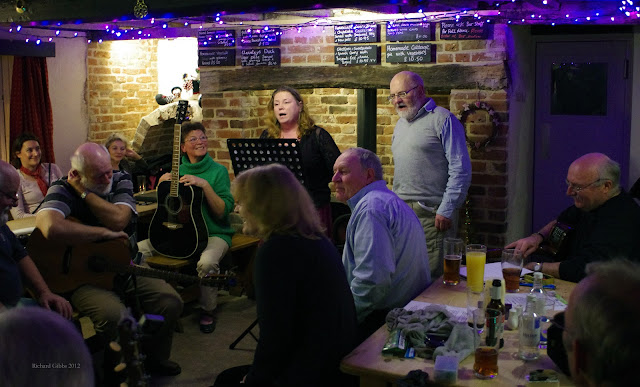 This kind of evening may not be to everyone’s taste, but it is exactly what I was looking for on this occasion.  Singing by a fireside, lubricated by quaffs of local ale, the oral traditions of folk song and the rhythms of dance erasing the memories of cold and wet – Merrie thrives!  At least for the moment….. 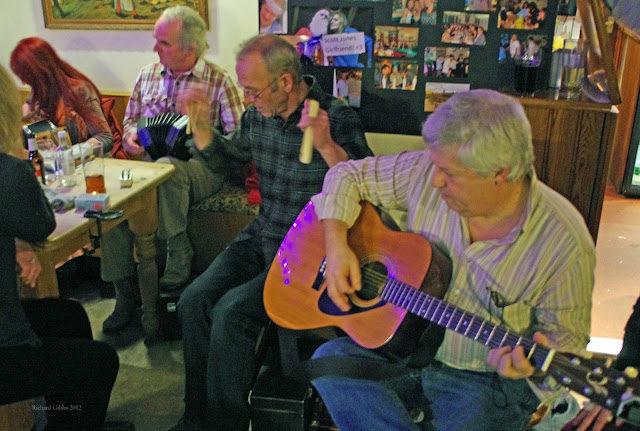 “The poem was over,


The poet had performed, a pleasant murmur


Started on the benches, stewards did the rounds


With wine in splendid jugs……” 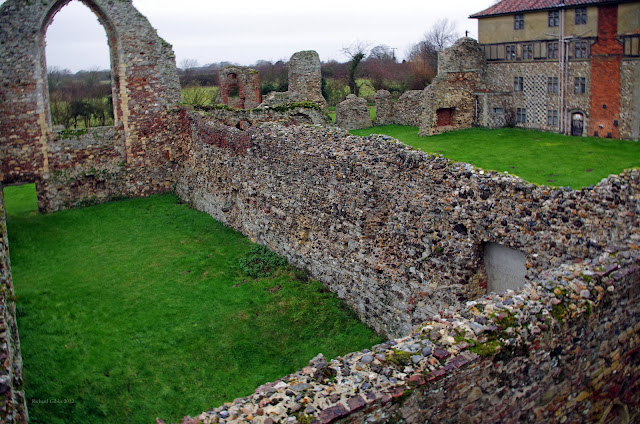 In the morning we stop at Leiston Abbey, wet feet, splashed with raindrops, umbrella-ing our visit with no one in sight.  But then, touching the brick and pebble walls, passing through loops and breaks in the walls, we feel the weight of years, the strange dislocation of the abbey from below, towards the coast, in the 14th century and then the brutal destruction by the henchmen of Henry VIII, but now we hear the tuning of instruments, the accordance of an ensemble, coming from on high within the reconstruction of the monastic buildings…..  A music school, Pro Corda, now occupies the site of the Premonstratensian Abbey, and, in a wonderful way on this grey wintry day, the sound of instrumental music issuing from a high window in a ruined abbey ties these chords together, as we link up the burial at Sutton Hoo, with the music at the Eel’s Foot Inn, with the idea of Merrie England.


As we leave we look back, then turn once again to the future. The year ends and another begins.  “Fortune, good night.  Smile once more.  Turn thy wheel.”

With thanks to Seamus Heaney for the quotations from "Beowulf"