The Battle of Blenheim

On August 13th, 1704, the English and Austrians, under the 1st Duke of Marlborough and Prince Eugene, beat the French and the Bavarian armies near the of , in .  The home team lost 30,000 killed, wounded, and prisoners, while only lost 11,000 men. The battle damaged the prestige of Louis XIV, and when returned to England Queen Anne granted him and his heirs the 2,000-acre royal manor of , and Parliament voted to provide funds to build on it a magnificent palace, on behalf of a grateful nation.  As something of an oversight, however, the “grateful nation” neglected to set a budget, and consequently the project ran into difficulty and, when this was complicated by a fall from favour, the family ended up having to foot much of the bill themselves.  Eventually, a decade or so after the Duke’s demise, with the grumpy help of architects Vanbrugh and Hawksmoor, the baroque fantasy was completed, with its 187 rooms covering seven acres under the roof, and its vast maintenance costs, which have necessitated many marriages for fortune (from the 9th Duke marrying Consuelo Vanderbilt, through an Onassis and W H Smiths, to the 86 year old 11th Duke’s fourth wife, Lily Mahtani, in 2008 – Lily is the daughter of Narinder Sahni, former executive of the Hinduja Group and the well-divorced ex-wife of Nigerian-based tycoon Ratan Mahtani). 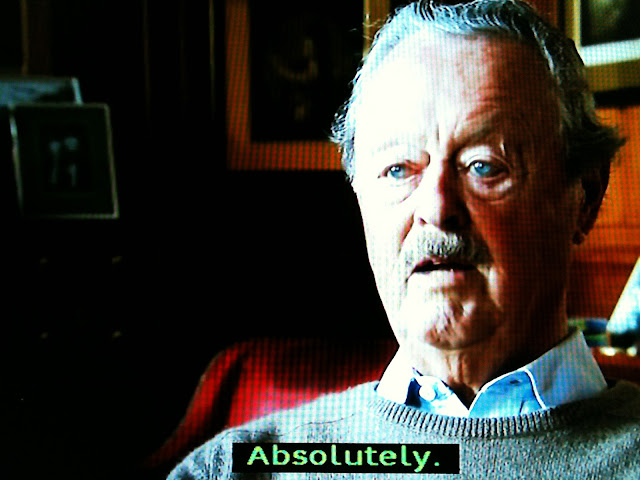 Anyway, “The Battle of Blenheim” became the subject of a poem by Robert Southey, who was not in favour of the recruiting drive for anti-French troops in the early nineteenth century.  The poem has an old man, Kaspar, telling his grandchildren about “a famous victory” which was fought near his cottage when he was a child (and which nearly cost him his life as an infant).

"It was the English," Kaspar cried,
"Who put the French to rout;
But what they fought each other for
I could not well make out;
But everybody said," quoth he,
"That 'twas a famous victory.

Kaspar cannot remember why it was fought or what good came of it. He only knew that it was a "great victory." The moral of the poem is that while the ruling classes fought for more power and glory; the peasants fled from burning homes, and the soldiers fell on the fields. The poem gives an idea of the real value to humanity of such famous victories as that of Blenheim.


"And everybody praised the Duke
Who this great fight did win."
"But what good came of it at last?"
Quoth little Peterkin.
"Why, that I cannot tell," said he,
"But 'twas a famous victory."


Anyway, I was reminded of this when I caught a documentary on Channel 4 the other evening, entitled, “The Aristocrats” and there’s the 11th Duke and his wife and, lo and behold, there’s Jamie, his wayward son, and all of a sudden I recall the same upstart’s voice many years ago, and his cheeky leer, as he said, “I’ll clap you in irons, Sir!”  The circumstances of this energetic and well-meaning threat were that I was a Gap Student teacher at Perry House prep school and James, Marquess of Blandford, was attempting to get his Common Entrance. 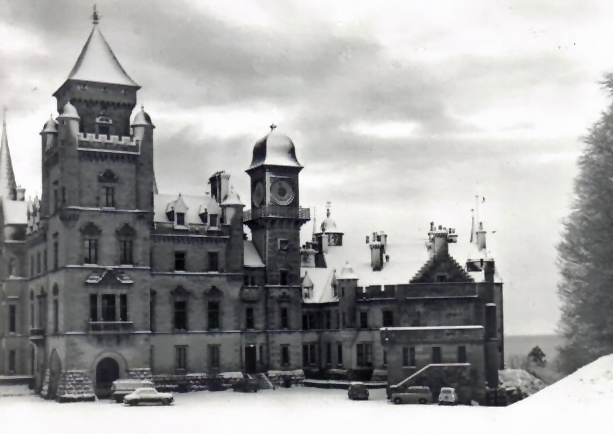 The school was at that time housed in in Sutherland, as Gordon Perry had had the misfortune to fall out with his wife, who owned the lease on the building housing his school in Gloucestershire.  This coincided with the Countess of Sutherland wishing to have one of her son’s crammed through the necessary tests by Mr Perry.  When he explained he would love to help but had no home for his school, the Countess obligingly said, as one would, “No problem, you can come to my castle….”


And so, wearing his butler’s shoes, Jamie dispensed aristocratic threats to the likes of me, the lower classes.  He was, then, I admit, a likeable boy, with a carefree attitude to almost everything and something of a sense of humour.  I do not remember teaching him anything, exactly, but I fancy I read “Lord of the Flies” to his class, and it didn’t take much to fathom that he was more Jack than Ralph.


That was forty-three years ago, but seeing and hearing him on the television brought it back instantly.  I had not followed his career closely, though I had picked up his difficulties through the press – his blowing four grand in a week on cocaine, his broken marriage, the attempt by his father to disinherit him – and now we see the father and son back together, not exactly loving each other, but the old man prepared to give his prodigal a chance.


The programme, with a quotation about family difficulties from Tolstoy (who quit his deathbed to avoid his wife) as a headstone, made sycophantic enquiries of the octogenarian pluri-espoused Duke as to his intentions for the family pile, and daringly provocative demands of the newly restored Dauphin as to his reliability, and his holiday plans.  It was, as one would expect, a laugh a minute.  The big project covered by the documentary was the construction of a £2m block of loos for visitors:  the one thing the current Duke does not expose to his paying guests is his own loo….    If you missed it, please click on the video below and enjoy a two minute edited verison of the three hundred year long documentary (with subtitles for the hard of hearing).....

Fifty million pounds has apparently been spent on Blenheim since 1955.  The current Duke inherited it in 1972 and says that he could not  have made the palace pay without opening it to the public.  Nowadays some 500,000 people visit every year.


Alan Bennett’s latest play “People” is currently showing at the National Theatre, and causing something of a stir in the National Trust, which takes issue with Bennett over his apparent criticism it.  In an essay published on November 8th in the London Review of Books, Bennett has this to say:


I have never been entirely confident that the glimpses one is allowed in stately homes of the family’s ‘real life’ always ring true. Years ago I was filming at , the home of Lord de L’Isle and Dudley, and I wrote in my diary:


‘Ah,’ one thinks, ‘a glimpse here of the private life.’ But is it? Is this really a private room or just a private room for public consumption? These drinks (and the bottle of vitamin pills beside them), have they been artfully arranged to suggest a private life? Is there somewhere else, another flat which is more private? And so on. The impression is confirmed by the hall table, on which are all the viscount’s hats: his green guards trilbies, his bowler, his lumberjack’s hat that was plainly presented to him on some sort of ceremonial visit. Surely, all this is meant to be seen?’


Bennett is rightly uncertain about the validity of some "cultural" tourism, though it is not for him or me to dictate what others should do with their leisure.  Some may enjoy inspecting the upstairs downstairs worlds of yesteryear just as some enjoy “Downton Abbey,” and others may enjoy running marathons, just as some like to visit stadia to follow their football team:  it is not for us to judge taste.


However, I have another train of thought.  My encounter with Jamie Blandford was enabled by Elizabeth Millicent Sutherland-Leveson-Gower, the 24th Countess of Sutherland, who benevolently lent for the purposes of education (albeit private).  Like Alan Bennett I experience doubt when visiting stately homes; I do not wish to criticise work in conservation nor the benefits to all of allowing us to appreciate how others may have lived, etc, but there is a limit to the number of plastic chickens on silver platters I can face, and there are times when I seriously doubt the value of preserving corridors of third rate family portraits, leather suitcases and billiard rooms for less fortunate folk to touch their forelocks at.


I got the job with Perry House and Jamie Sunderland/Blandford on the back of a few weeks as a guide in ; I spent day after day guarding Canaletto paintings, Mortlake Tapestries and a view of gardens modelled on .  Garibaldi left a slipper in a glass case, and Alice, another guide, (coincidentally surnamed Sutherland - who had been a maid there in the days of the 5th Duke) could not help giggling nervously at any enquiry into the role she actually played in her youth when an employee of the family.  One day two middle aged couples from visited, and one of the group, a portly chap in corduroys, looked around, stretched his braces with his thumbs, and breathed in deeply.  “Eeeee,” he exhaled.  “The very atmosphere gives ee kulchur….”


Sorry, that’s a digression….  My train of thought is this.  If Elizabeth Millicent Sutherland-Leveson-Gower can turn her castle into a school, how much more could be made of the 200,000 square feet of buildings and 2,000 acres of Capability Brown landscaped parkland?  As it was originally a gift from a grateful nation, perhaps it is time for a dysfunctional family to return it to the nation, and not, I hasten to add, as a memorial to their way of life, nor a picture gallery of engineered marriages and unloved offspring, but as something really useful.  A hospital perhaps?  As in times of war when such 'homes' were requisitioned on behalf of the state; Jamie says in the documentary that the are, “Good in times of war…. (the proper role of the Spencer-Churchills,)” and he also says of the palace that, “When you’ve got a monster like that, albeit a pretty monster, it’s like having a high maintenance wife….”  Well, perhaps we should take it off him, especially if that is how he feels about it? 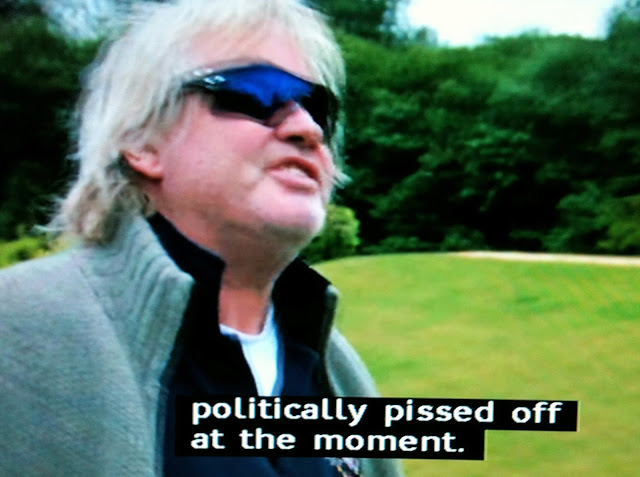 Do we need to know whether he will be fit (he suffers from SAD syndrome, he laments) to manage the estate?  Even with a board of trustees, which include his younger brother?  Do we need to worry about the upkeep and future of such a place?  Why not turn it into something practical and beneficial?

And here is my master plan….  With its ideal location, splendid buildings, and magnificent, fairly level park, is it not the perfect place for an airport?  You could check in in the ball room, browse the picture gallery while having a coffee, then take off across the lake…..  The loos are new, so no problem there, and there’s plenty of room for cars and buses.  Job done!  And the people of Putney and Uxbridge could sleep at last.  Oh, and the Duke and his newly functional family would have no need to move out; they could plane spot just like the Windsors.  In fact there would even be a role for Jamie after all, something really valuable, like Chief Customs Officer….  “I’ll clap you in irons, Sir.” 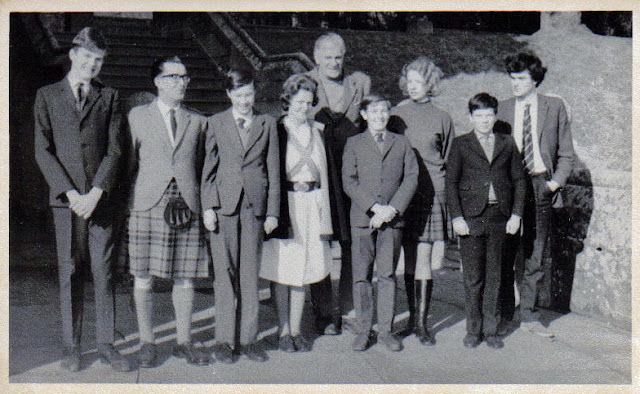 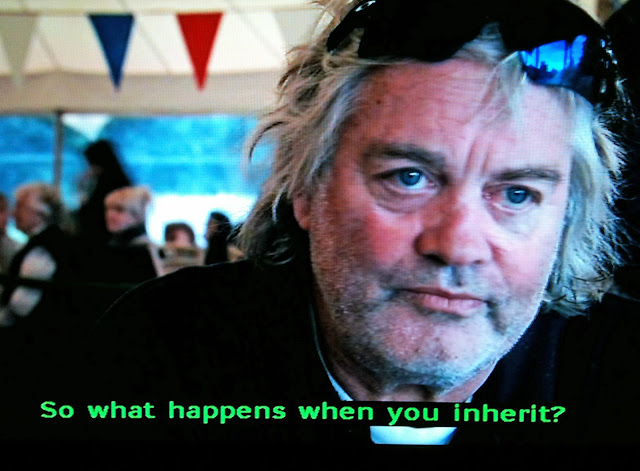