A Murder of Crows

The Culture of Crows 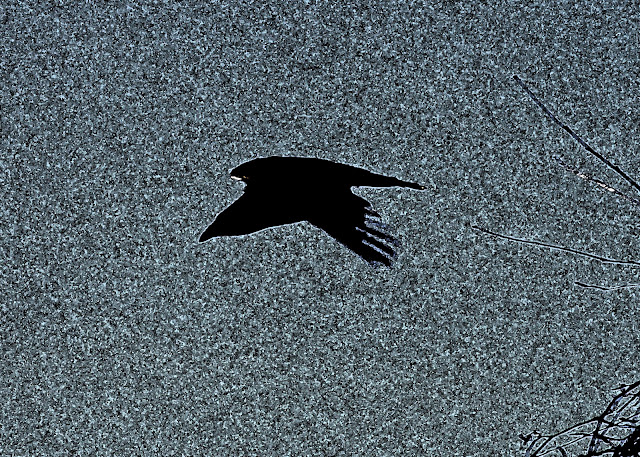 ﻿I read today that Penn State University Campus is being plagued by hundreds ('if not thousands') of crows which have returned to roost this winter, attracted by the warmth of the site at night.  And "their homecoming again has created an unsightly and unsanitary problem here for those trying to dodge the droppings falling from the sky."  So action is being taken and noisy flare guns are going to be used to frighten the birds away.  "They were coming in from the east," emailed one eye-witness.  "The students were dodging strafing runs from Eisenhower Deck to Thomas to Ritenour. It was just like a scene from ‘The Birds.’ People looked up, but not for long; everyone was running.....” 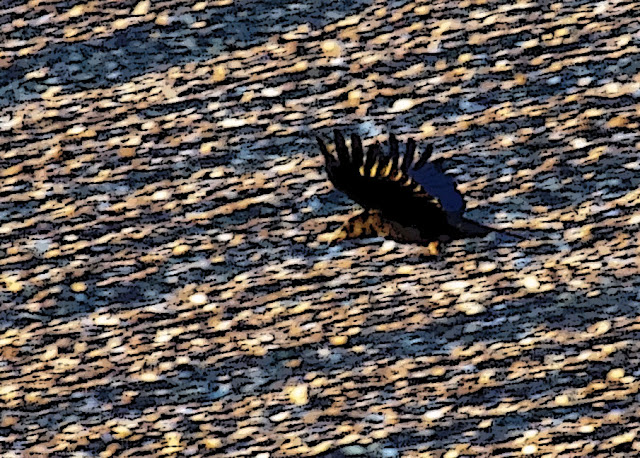 And yeah, those Hitchcock birds sure did scare us.  Tippi Hedren gashed by flashing beaks, the evil eyes, the malicious intent.....  They were real birds, too, you know.  Not actors.

The poor crow has always had a bad press.  In the Book of Leviticus it is cited  as one of the things not fit to eat, which perhaps is why the Washington Post had this headline on November 28th: "No crow on Obama-Romney lunch menu," as eating crow is the US version of eating humble pie (where umbles = deer guts (so they say) ie not nice to eat.....)

It is also a bird of fear, an omen bird.  Macbeth notes that:

"Light thickens, and the crow
Makes wing to the rooky wood;
Good things of day begin to droop and drowse,
Whiles night's black agents to their preys do rouse."

And four centuries later Ted Hughes picked up the image of the haunting, dark-spirited being, and charged it with emotive danger.
"Where is the Black Beast?
Crow, like Owl, swivelled his head....."

You can see Ted Hughes explaining his choice of Crow for the poem sequence in a film clip from 1970 on Youtube, at:


Pretty bad press.  Poor bird.  'Birds Britannica' pulls no punches, stating that the corvids (while recognisiing that there are various species in the UK family, including the Magpie, the Jackdaw, the Jay, the Raven, as well as the Carrion Crow), "Remain the most unloved of British species...."  There are reasons:  crows are renowned for pecking out lambs' tongues and eyes, and even for eating human flesh.  Though, as survivors, should we begrudge them their survival?  We eat pretty much anything that moves or has roots.....

I find myself on the loving side.  On the side of John Clare, one of the biggest selling poets of the 1820s, who with his patient focus on the natural, especially feathered, world, saw what others never saw, and who loved the, "sooty crow.....  I love to see it sailing to and fro."  Clare spent most of his early life in the open, as a labourer, or simply lying in thickets waiting to see a particular bird (no binoculars).

"How peaceable it seems for lonely men
To see a crow fly in the thin blue sky
Over the woods and fealds..."

On my way to work, a lonely man seeking some peace, early in the dark, a moon falling out of the crisp night sky, I am watched by a murder of crows.  They have scoured their way across the common to a plane tree outside the Harpenden House Hotel.  They chatter and flapple, congregate and dissociate, enacting parliamentary divisions on the moments of the day.

I am struck by their diplomacy;  they carry no guns, no placards; have no aides, no PAs, no agendas.  Swirl, settle, chackachacka, swirl, fly.  There is no suggestion of evil, past the predictable blackness of their garb.  These are birds (pace Tippi and Alfred and the host of twine-pulling studio hands); they show us how individuals fit into groups (and have to); they show us thrift, imagination, community, conservation, and perhaps they show us a sense of making the best of things?  As Clare observes:

"And often flap their sooty wings
And sturt to neighboring tree ﻿
And seems to try all ways to sing
And almost speaks in glee...."

Kevin McGowan, Cornell Lab of Ornithology associate and co-editor of the second New York State Breeding Bird Atlas, is an authority on the crow family and gave the following as an answer to the question, 'What is one thing you wish everyone knew about crows?'

"I wish people understood that the groups of crows they see are often families, not gangs. People attribute some sort of malicious intent to what crows do when they’re just trying to raise their kids like everybody else. It would be nice if people actually thought about it as mom and dad and the kids from last year who are still helping them raise young. It’s not a bunch of juvenile delinquents coming through and trying to cause trouble." 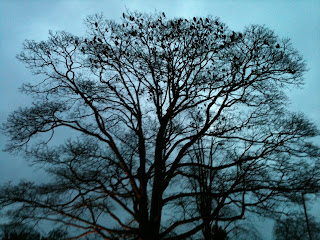 ﻿
Standing under the cold, bare tree in the early commuter light, I get some subtly puzzled glances, but the birds don't mind.  With my iphone I shakily film these busy fellows for a few seconds.  There's nothing ominous about them; like the bipeds on their way to the station, these birds are up for earning a crust, as soon as it's light. 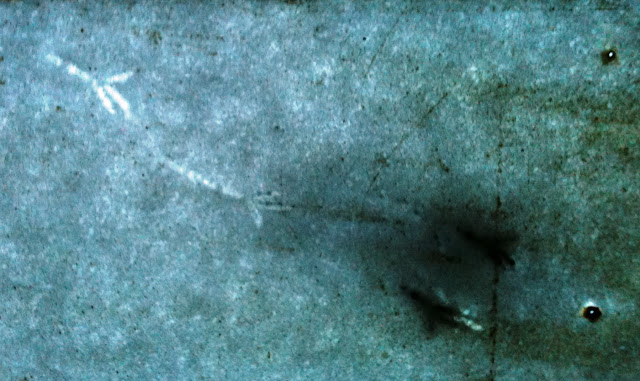 North America has a lot to answer for, not least its version of the ubiquitous corvid, but it also has the Crow (Apsáalooke) Tribe of Indians, with a membership of approximately 11,000, of whom 7,900 reside on the Crow Indian Reservation. Eighty-five percent of these speak Crow as their first language. The tribe was originally called "Apsáalooke," which means "children of the large-beaked bird."  White men later misinterpreted the word as "Crow."   Perhaps we have all misinterpreted the word 'Crow.'

I stand below the ragged flapping coal black tattered flocks of life, grateful that diversity helps us put ourselves in perspective.....

"Who is stronger than death?

For the final scene of Hitchock's "The Birds" see:

But please note it was the gulls that started it......