My days are in the yellow leaf 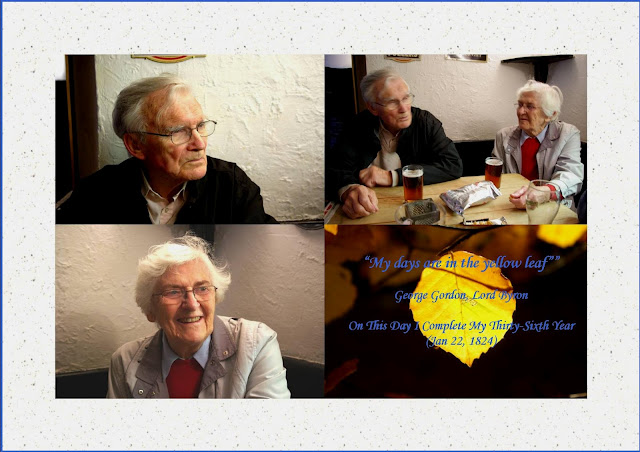 From the West Country - The Mendip Fringe, 1

There’s a certain something about Bus Stations.  The cosmopolitan bustle, the unhurried purpose, the smell of spilt oil, and the purr of big diesels – all controlled but disparate movements and noises blending into a general hum of purpose.  Within the bright confines of the snack bar, tea steams in polystyrene cups, ashtrays spill over with teabags and crushed fag ends.  On the stands, men, women, young and old, queue in patient order, their expectations quietly contained behind their masks. The colourful coaches and double-deckers nuzzle in and load, then edge out and depart, heading for magical destinations, the great elsewhere.  Fishponds.  .  .  Midsomer Norton.  Yate.

I board the Chew Valley Explorer, bound for Churchill via Blagdon, and head out of town, gradually leaving the suburbs behind.  For a change it is great not to have to drive, and, also for a change, it is wonderful to be able to gaze out of the windows, taking in the surroundings, not just having to concentrate on the exhaust fumes in front.  It is also great to have the raised vantage point that a bus affords, and soon we are skimming past , which shines like a polished mirror in the sun over the still, silver, frosted, beautiful countryside.  There is a clear crystal blue sky, frost everywhere, frost on the grass, frost on the roofs, and villages still in the winter sunshine: Bishop Sutton, Chew Magna.  The weak sun just glimpses over the skyline through the bare trees.  In the church clock gleams golden like a face reflecting the sun.  Then Blagdon where the church tower stands proud above the lake.  There’s a chill in the air; it’s a sharp crisp winter’s day.  The bus leaves me to linger here, and there’s plenty to see and delightful pubs to savour, but I climb the hill, past Pratt’s garage, left in a time warp with 1950’s petrol pumps and signs.  Further up the hill, past the pottery, there is Channel View, 1908, and indeed you can still see across the landscape to the .

Then, above Blagdon, Luvver’s Lane plunges off between hedges, catkins high above the path, symbols of spring to come.  The hedge has been trimmed neatly but violently with nicely layered piece of hedge, uprights driven deep in.  Blackbirds chatter excitedly in the woods.

At 200 metres above sea level, at the end of Luvver’s Lane, leading on to the Limestone Link, with Big Batch rising up to 325 metres above on the south side.  A charm of goldfinches leads me across the Barrington Combe road to moor land rising on left.  The bridleway churned up by horses, feet and bikes though the ground is frozen bone hard.  Near Goatchurch cavern I cross a deep gully carved by a stream; the limestone strata above Barrington Combe gently undulating like waves.  There is a waterfall gushing down the hill but it disappears down a swallet hole and the streambed is left dry.

The sun is warm on my back, though there is ice on the puddles.  There are strange cuts and dips in the land, with spiky reeds.  Dry stone walls crumble among the trees on one side; on the other, Rowberry Woods fall away deep inky black with the sound of water flowing at the bottom of a deep scarp.

I reach the foot of Dolebury Warren.  Before me is a ridge of limestone covered in grassland.  According to the information board this is a place of bee and pyramidal orchids, yellow wort, drop wort and kidney vetch.  Tiny but beautiful spring annuals such as rue leaved saxifrage, common storks bill and early forget-me-nots thrive on the shallow rocky soils.  In places bell heather and bilberry grow amongst limestone heath.  The acidic soils derive from sands blown onto site during the last glaciations.  Dolebury Warren is specified a site of specific scientific interest by English Nature and a scheduled ancient monument by English Heritage.  There is a 2000-year-old Iron Age fort from which there are excellent views out over the .  The National Trust owns the site that also has a medieval rabbit warren (which provided the local inhabitants with fresh meat) and a Celtic field system.  The crisp frosted grass matches the shadows.  A buzzard flies low across past me, unconcerned by my presence.  I pass ancient anthills, hummocks grassed over and trimmed by the sheep like green nodules, ridged hillsides and bare trees:  not a single leaf. 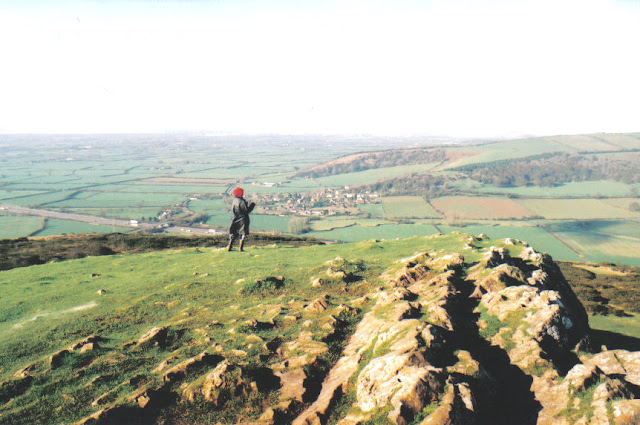 I am alone, high above the countryside around, but fringed by trees.  There is evidence of a tree felling programme within the hill fort ramparts to enhance wildlife interest:  they are taking out non-native trees, especially turkey oak and sycamore of very little wildlife value; good quality English oak and hawthorn, ash, spindle, holly and wayfaring trees are being retained to keep the open parkland aspect.  The ramparts are impressive with sizeable limestone blocks and scree stones, and the fort is some two hundred metres long, sloping towards the west.  There is an amazing view, and it is a brilliant defensive position.  The levels are flat like a map and diminutive church towers and steeples mark the parishes below. There is a steep track down through woods to the A38.

There are four pubs in Churchill.  The extraordinary Crown Inn, CAMRA pub of the year 1999, on the corner of Skinners Lane and The Batch, which is a place that is almost from another time, certainly from a wilder world.  A step away there is the bright and cheerful Nelson Arms, and on the A38 there are two pit stops, one on either side of the road: the Stag and Hounds and the Churchill itself, with the grand old man’s cigar-toting portrait as an Inn Sign.  The Crown, however, is a different experience.  It is not an everyday, modern, carpet and fruit machine boozer at all.  Possibly, just possibly, it’s a place that started life around the end of the last glaciations, where Iron Age men raised horns of mead.  Certainly it is a fitting place to end a stumble through limestone gorges and over a 2000-year-old fort… 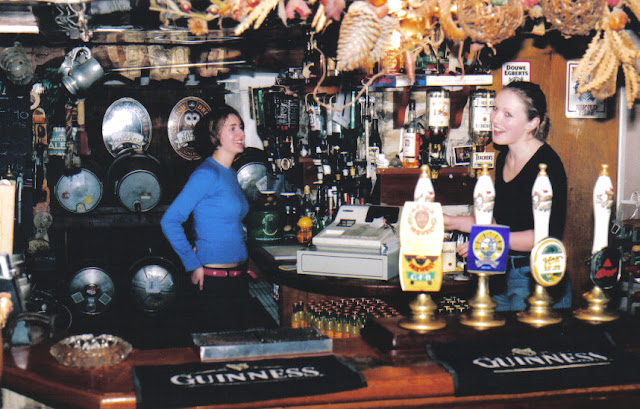