Pastissada de caval is a speciality of la cucina Veronese - the cooking of Verona. Apparently it originated on September 30th AD 489 after a furious battle between the Italian King Odoacre and the Ostrogoth Theodoric, after which there were so many dead horses that the starving local people chopped them all up and stewed them in wine. In essence it is a little like a strong goulash though in Verona it is usually served with polenta and made with Amarone wine, which gives it a particularly robust flavour. I can recommend this dish and I especially recommend eating it at L'Antica Trattoria Tipica Al Bersagliere which you can find in the old heart of Verona in via Dietro Pallone, 1, which is in the Filippini district.

In these days of mixed meat dishes on supermarket shelves and worries about the drug content of substances which may not be beef, I find it heartening to think of our continental cousins who specialise in knowing what they eat.

"I had been half afraid to go to Verona, lest it should at all put me out of conceit with Romeo and Juliet. But, I was no sooner come into the old market-place, than the misgiving vanished. It is so fanciful, quaint, and picturesque a place, formed by such an extraordinary and rich variety of fantastic buildings, that there could be nothing better at the core of even this romantic town: scene of one of the most romantic and beautiful of stories." Charles Dickens, 'Pictures from Italy.'

"Pleasant Verona! With its beautiful old palaces, and charming country in the distance, seen from terrace walks, and stately, balustraded galleries. With its Roman gates, still spanning the fair street, and casting, on the sunlight of to-day, the shade of fifteen hundred years ago. With its marble-fitted churches, lofty towers, rich architecture, and quaint old quiet thoroughfares, where shouts of Montagues and Capulets once resounded,

'And made Verona's ancient citizens
Cast by their grave, beseeming ornaments,
To wield old partizans.'

With its fast-rushing river, picturesque old bridge, great castle, waving cypresses, and prospect so delightful, and so cheerful! Pleasant Verona!"

"But anywhere: in the churches, among the palaces, in the streets, on the bridge, or down beside the river: it was always pleasant Verona, and in my remembrance always will be."

I love Verona. The city is elegant without being fussy or too smart, and it holds its history well. You may not sense the Romans so much when enjoying opera in the amphitheatre, but it's not so different from the physical experience the public had when being entertained two thousand years ago. The stones you sit on have not moved. The sky is your ceiling.

The river curves around and through the city, like a cat's tail wrapping snugly about itself. The bustle of citizens and visitors could be medieval in the combination of purpose and leisure. The heat that glows from the medieval bricks in the evening lulls you into comfort after the hard sun of the day.

If you wander into the Basilica of San Zeno, the patron saint of Verona, you can admire the twelfth century bronze doors, the thirteenth century rose window called "La Ruota della Fortuna" [the wheel of fortune], the Romanesque cloisters, and the fifteenth century triptych of the Madonna and Saints, by Mantegna, over the high altar. Outside there are two towers: the campanile of the Basilica which was completed in 1178 and a ninth century battlemented tower which is the only part to survive from the original Benedictine monastery.

In the centre of Verona, above the market place, are buildings with faded frescoes such as Juliet would have recognised. The rustic tiles and modest windows do not overbear with grandeur, but carry a rich sense of homeliness and slightly racy humour that decorates without overbalancing the effect. Meanwhile, emerging from the antique rooftops more modern walls do not clash with or detract from the scene, and creepers trailing from iron railings complement the colour scheme, relating the middle ground to the cypresses in the distance. 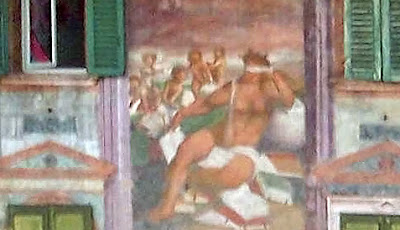 There are reminders of the medieval in the market place itself as well. Chains hang from pillars where unfortunate miscreants were detained to be pelted with whatever was to hand. The iron collar is lifeless now, but it does not take too much imagination to step back a few centuries in time here. 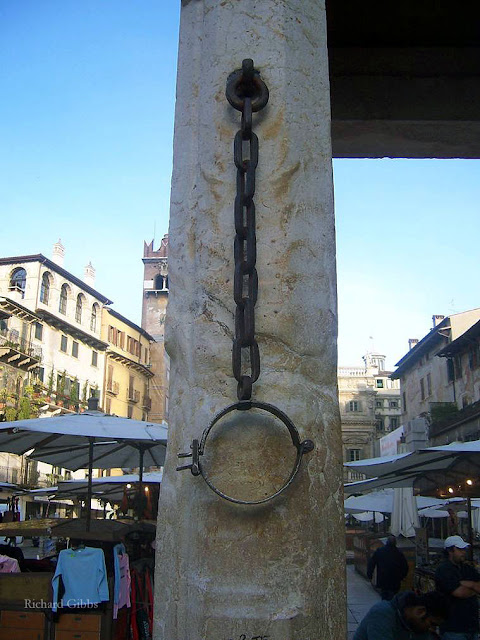 From Baz Luhrmann to Franco Zeffirelli, through Prokofiev to Gounod, Berlioz and Bellini, to Shakespeare, to Bandello, Salernitano and Dante, the story of warring families and teenage love has inspired creative artists to bring the drama to life. And whatever the historical accuracy the setting of Verona is a perfect cyclorama against which to throw the shadows of the young lovers and their squabbling relatives.

Whether any Capulets actually lived within the massive walls that masquerade as Juliet's home, or whether a young man ever scrambled up to the balcony which purports to be that of Juliet, is quite immaterial to most of the tourists who come here. It's good enough. It will do. The poor girl comes alive on her deathbed again and again as the prologue repeats itself and the "pair of star-cross'd lovers" entwine in our romantic imaginations. 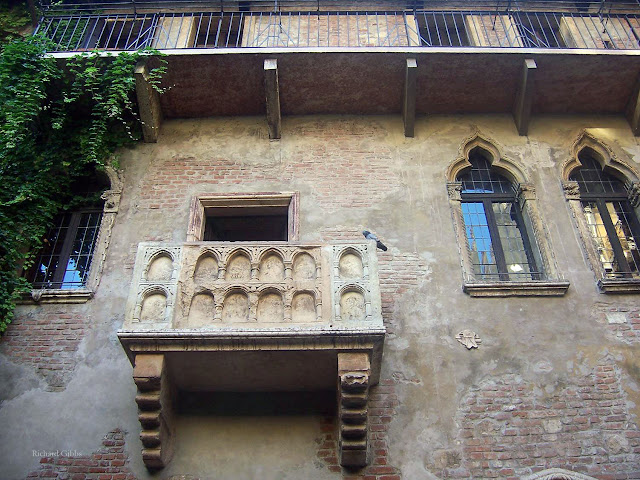 The story in Shakespeare's version is still extremely popular, and apart from the celluloid versions, there have been at least 24 operas, as well as Peter Ustinov's "Romanoff and Juliet" and Leonard Bernstein and Stephen Sondheim's "West Side Story."  There's no escaping the enduring appeal.

The one thing that is missing is the sparking clip of hooves. There is not much traffic in the centre of Verona these days, but so there are few horses, if any. No sparks fly from iron shod feet, and no crossing sweepers clear the muck. The smells of the medieval days, (though of course they were modern times then!) do not offend our senses, even though there may be less salubrious corners, and Charles Dickens's observations are not necessarily so remote: "An equestrian troop had been there, a short time before..... and had scooped out a little ring at one end of the arena; where their performances had taken place, and where the marks of their horses' feet were still fresh....."

I cannot help but feel there should be horses.  Perhaps the medieval feel to the streets makes me expect to hear the clatter and neigh.  Perhaps remembering the days of the Grand Tour, and Dickens's crazy gallivanting back to London or down to Rome?  Perhaps the preponderance of performances of "Aida" in the amphitheatre with casts of thousands including circuses of elephants and camels?

Or is it the rich savour of "Pastissada de Caval" which brings them to mind?  I am not sure.  But I know one thing, I do relish the difference, and although I may offend vegetarians and all horse-loving British folk here, it is part of the enriching experience of travel to find people who are not afraid to call a horse a horse!  Better that than a lifetime of eating burgers and sausages whose unspeakable contents could be just about anything?

Anyway, just like Charles Dickens, "I read Romeo and Juliet in my own room at my inn that night - of course, no Englishman had ever read it there, before......"