Whitechapel, "not a wery nice neighbourhood....." (Sam Weller in "The Pickwick Papers.")


Altab Ali Park, pictured above, was so named in 1998 in memory of a 25-year-old Bangladeshi clothing worker, who was murdered in adjacent Adler Street on his way home from work in 1978 by three teenagers. Previously the park was St. Mary's Park, the site of the 14th Century white chapel, St Mary Matfelon, from which the area of Whitechapel gets its name. The chapel, which became the Parish Church of Whitechapel, was destroyed in the Blitz. 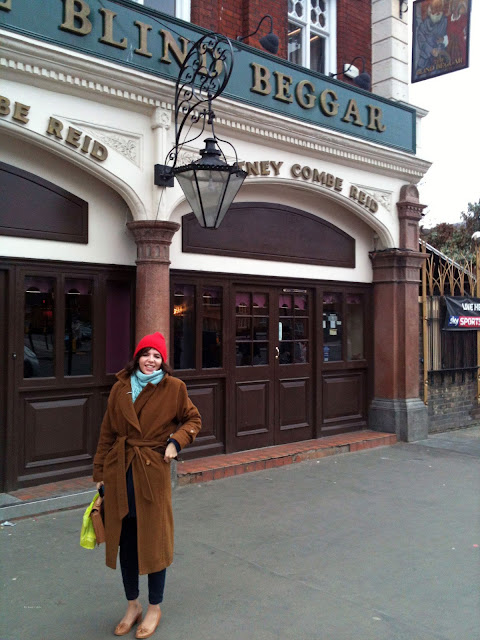 Some time ago a colleague told me about her first teaching post, which was in East London.  On Fridays, after school some of the staff would go for a drink in their local pub, The Blind Beggar.  This was also one of the haunts (aka the place that Ronnie shot George Cornell of the Richardson gang on March 9th 1966) of the Kray brothers, and my friend got to know the twins a little.  She recalled being told one day that, "If any of them kids bother you, Missie, just let us know.  We'll sort them out!"


How reassuring.  Who needs private medical insurance when you have protection like that?  They cared for people, the Krays.  In a way they were just like the National Health Service.....

I was reminded of this the other day when I dropped into the Blind Beggar myself, and found that memorabilia of these famous local boys were on sale in the pub.

Anyway, my reason to be there was not idle curiosity.....  I was visiting my mother, a guest of the National Health Service, following a serious fall and a tour of various hospitals, including Moorfields, where an emergency operation saved her right eye, though not the sight in it.  I mused on the sad irony of this in The Blind Beggar, before approaching the hospital.

Disconcertingly, the building itself was blind, with windows boarded up and painted plyboard prohibiting access.  Was this a bad dream?  A cruel trick played by the NHS?  Was my mother rattling round in there, a lone patient in an empty ward? 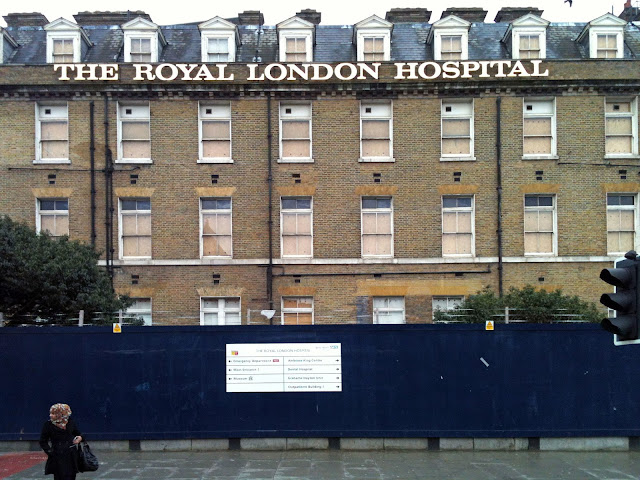 This grand building, still sporting the Royal name granted it in 1990 on its 250th anniversary, has in fact been replaced by a vast structure in blue glass that rises behind it.  This is not complete yet, but planning started in 2005 and £1bn was set aside to fund the redevelopment.  The Queen visited on February 27th this year to unveil an official opening plaque (I hope this wasn't where she caught her tummy bug - dangerous places hospitals!)

So the face of Whitechapel continues to change, as does the London skyline itself.  My mother, at first on the 11th floor, had a vertiginous view down a glass canyon to unfathomable depths. 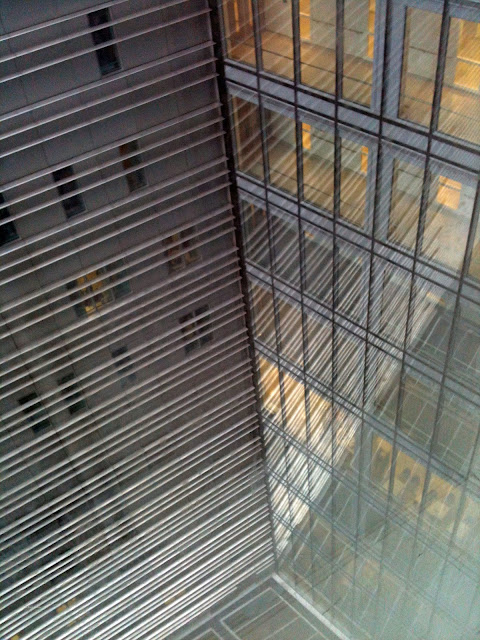 Subsequently moved to the 8th floor she had a different aspect, one that had some familiar sights towards the city. 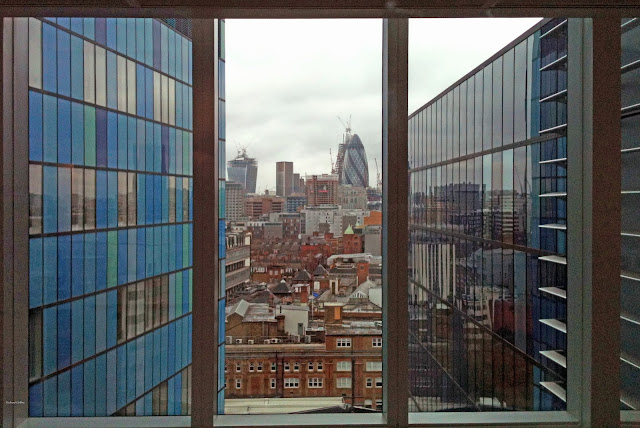 Which, when expanded, includes the Shard, 30 St Mary Axe and between the two of them the Walkie Talkie, under construction.

As a building the new hospital is, once you have found your way through the corridors and up the highly confusing lift system (don't expect any lift to take you to any floor - oh no!  You need to find the right shaft and then programme the lift from the floor you are on to take you to the one you want.  And woe betide you if you happen to be colour blind!)  Sorry, as a building it is impressive, with spacious wards and state of the art facilities.  How sad then to find that the National Health Service itself has not kept up with progress.  While the standard of care and the quality of nursing is generally wonderful, the lack of communication between floors or departments is extraordinary.  Copious handwritten notes in files seem to be compiled in each of the three wards hosting my mother, but in each case these seem to start from scratch, so that in one ward they have no idea she has had a fall, despite the bruises on her face and the damage to her eye.  And when it comes to discharge, none of the notes follow her to her respite destination, so that the recipient nursing staff there have no idea about her medication.  Sorry, I don't wish to criticise the service which, since 1948 has been one of the wonders of civilisation.  But systems and controls are simply not good enough.  This was exemplified, perhaps, by one consultant telling me over the phone, "I am only a Consultant!" as if that explained everything. 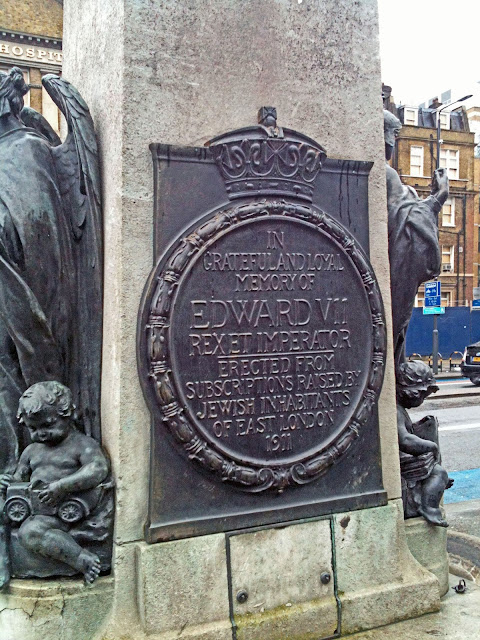 Anyway, moving away from the Hospital, and its 40,000 annual admissions, there's more to Whitechapel than this. In Dickensian times, Sam Weller, In "The Pickwick Papers," declared that it was "not a wery nice neighbourhood," as, being outside the city walls, it was a sprawling area of narrow alleys, slums and stews, unregulated and unplanned.  In the 1880s it was associated with the Jack the Ripper murders, which still inspire guided tours and whispered theories, despite (or perhaps because of?) being terminally unsolved.

Whitechapel High Street is the road to Colchester, and in itself is broad and functional.  On either side there are traces of older establishments and new developments.  The chrysalis of the old Hospital and its emerging butterfly symbolise the state of change.  The old Church Bell Foundry, established in 1570, still stands and still works (it produced Big Ben, thirteen and a half tons or history, cast in 1858). 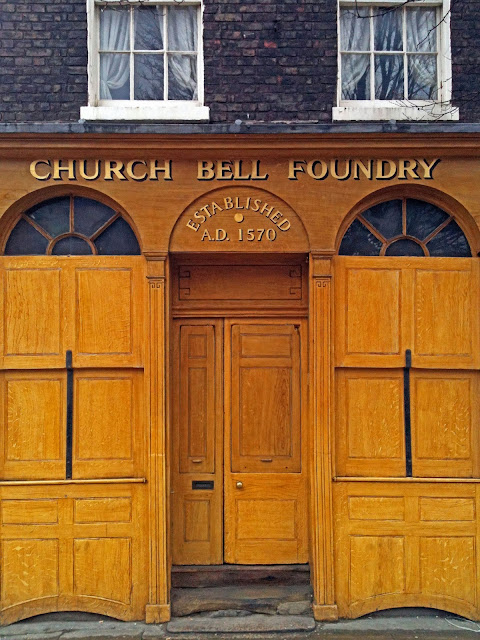 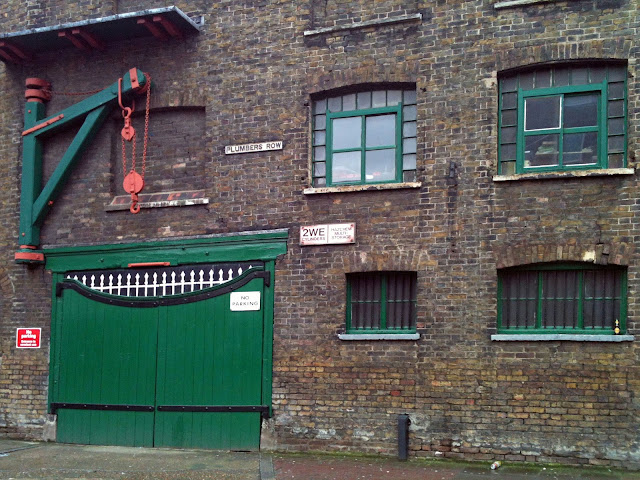 Not far away are the East London Mosque (completed in 1985) and the London Muslim Centre (completed 2004) is one of the largest mosques in the UK, capable of accommodating 5,000 worshippers at prayer. 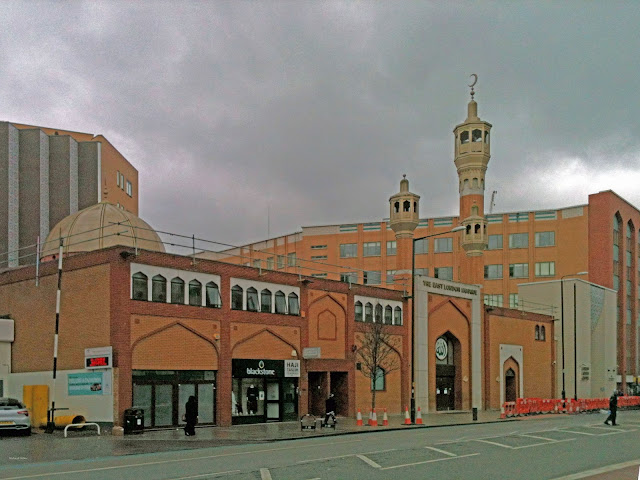 Then back along the road towards Aldgate is the Whitechapel Art Gallery, which was originally opened in 1901 but which underwent a £13.5m refurbishment recently and reopened in 2009, with a tapestry of Picasso's "Guernica" as a key exhibit.  It has been one of the most influential galleries in London over the last century, and continues to be a prime location for international contemporary art. 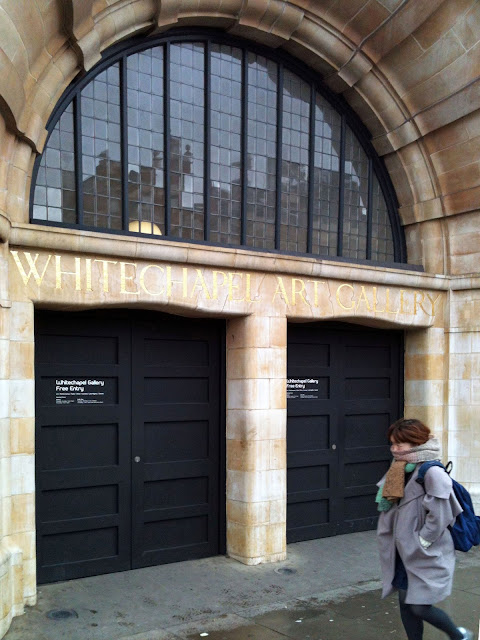 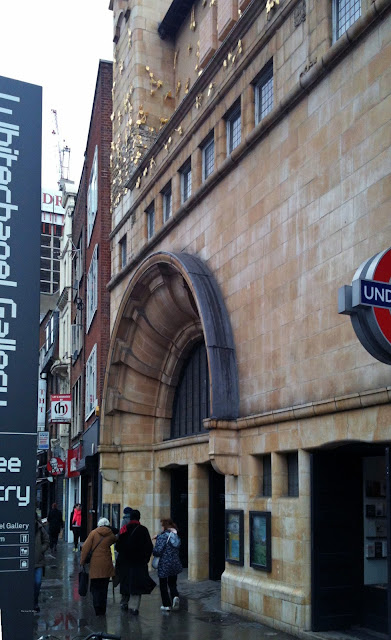 It is probably not surprising that there are also venues of the performing arts. Though the theatres of Dickens's time have long since disappeared, there is the Nags (sic) Head, at 17 - 19 Whitechapel Road, which is, "one of London's oldest lap dance establishments where you can enjoy exotic performances from dancers from around the globe." As its website informs us, you can, "Unwind in the welcoming bar atmosphere and watch seductive pole dancing on-stage all day." It is a small venue, but according to one blogger, "you will find a mix of local residents, tradesmen and City workers all of who know each other and have done for years," and it has recently been tastefully refurbished. One of its clients, Martin Askins, had this to say in 2012, "I spent a marvellous afternoon there. The main attraction may be the enormous tiddlywinks table downstairs - ask at the bar if you wish to have a game." If you are really interested "Private dances in secluded booths are available from £10," and,  "a private VIP room is also available where you can relax and enjoy champagne with the girls in a more intimate setting."

The Nags Head was closed, as I think the photo demonstrates, when I passed by..... 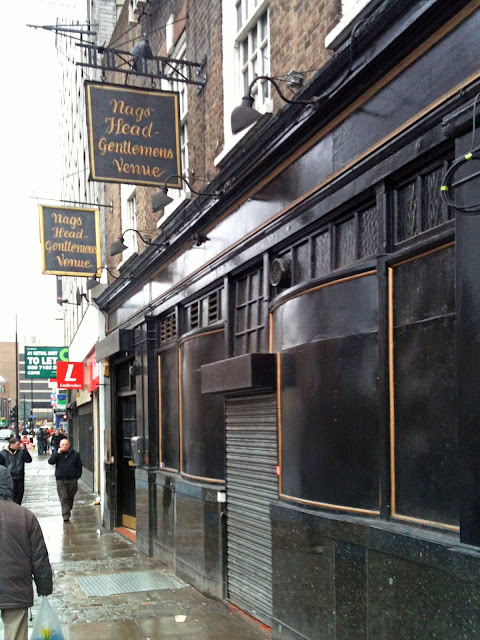 The ghosts of the Krays and the Richardsons live on, perhaps..... and even my bruised and battered mum nods in direction of their memory by posing, high above the seedy streets, as Jack 'The Hat' McVitie, a "lovely man," according to 'Mad' Frankie Fraser. 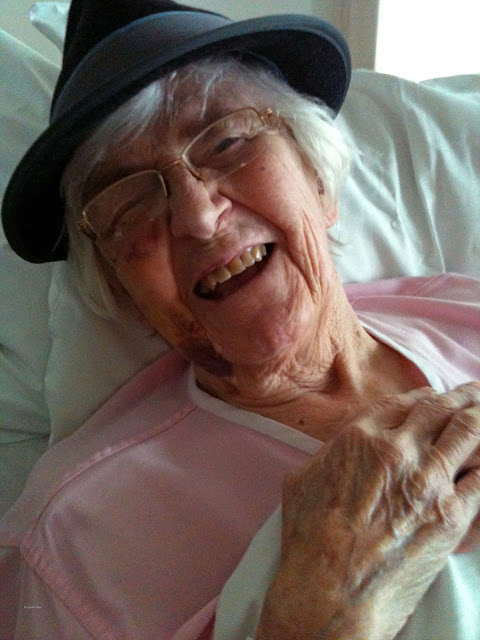 But in walking down the Whitechapel Road it is not the Krays who are commemorated.    It is George Bernard Shaw and the Fabian Society who met regularly in the area.  It is Vladimir Ilyich Lenin, who lived here during his exile from Russia.  It is the "Elephant Man," Joseph Carrey Merrick, who died in the Royal London Hospital.  It is Monica Ali, whose novel "Brick Lane" brings to life the world of a Bangaldeshi woman in Whitechapel.  And it is Altab Ali, who died by the site of the chapel.

In thinking about this excursion into Whitechapel, it seems fit to quote the final lines of Rabindranath Tagore's poem, "Fireflies," a verse of which is embedded in the path within the Altab Ali Park:

"Before the end of my journey
may I reach within myself
the one which is the all,
leaving the outer shell
to float away with the drifting multitude
upon the current of chance and change."