The paths up to and down from Pen-y-Fan, at 886 metres the highest point of the Brecon Beacons, are busy. Snippets of conversation whip past with the cold wind.  Two young women pass me in opposition, chattering.... She didn't used to be a cow..... says one. 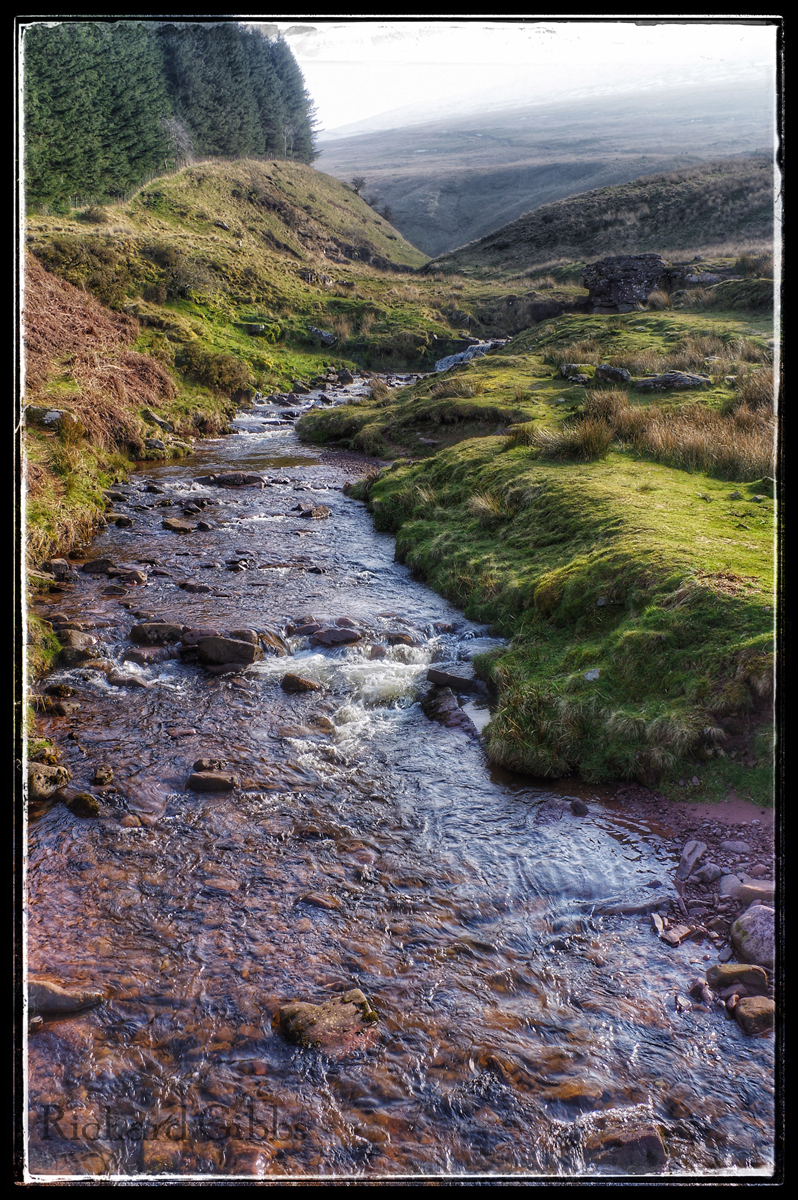 I thought I would start early and beat the crowds, but breakfast at The Tanners Arms, Defynnog, couldn't be hurried, and it is nine when I reach The Storey Arms Outdoor Education Centre on the A470, and the car park is already overflowing along the verges.  Spry individuals, dog walkers, hardy runners and groups of tough souls are gearing up and setting out. 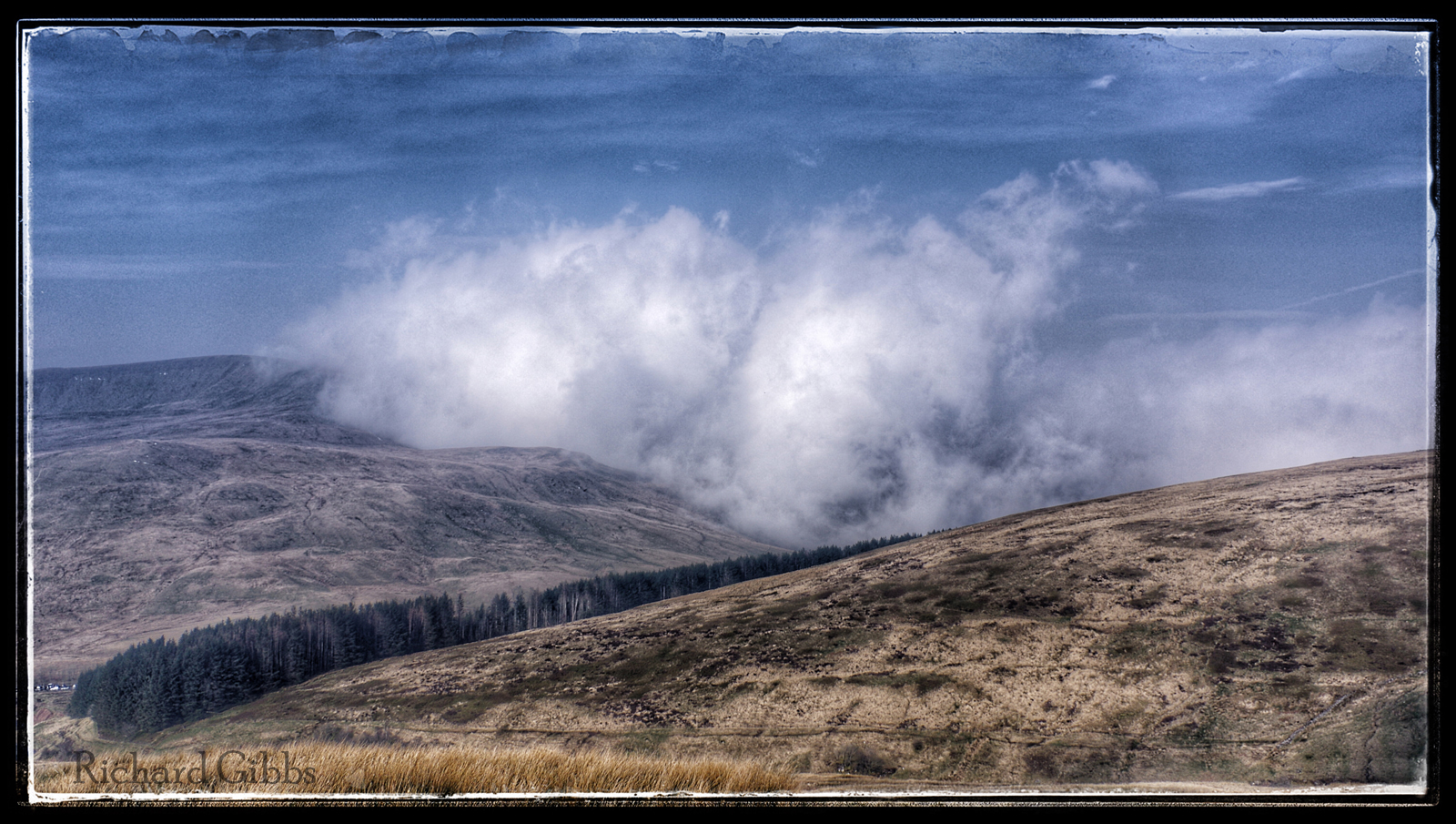 It's a fair day at 400 metres above sea level, but the heights are cloud covered and snowy.  I walk down to Pont ar Daf and then take the track across the stream and aim for the skies.... 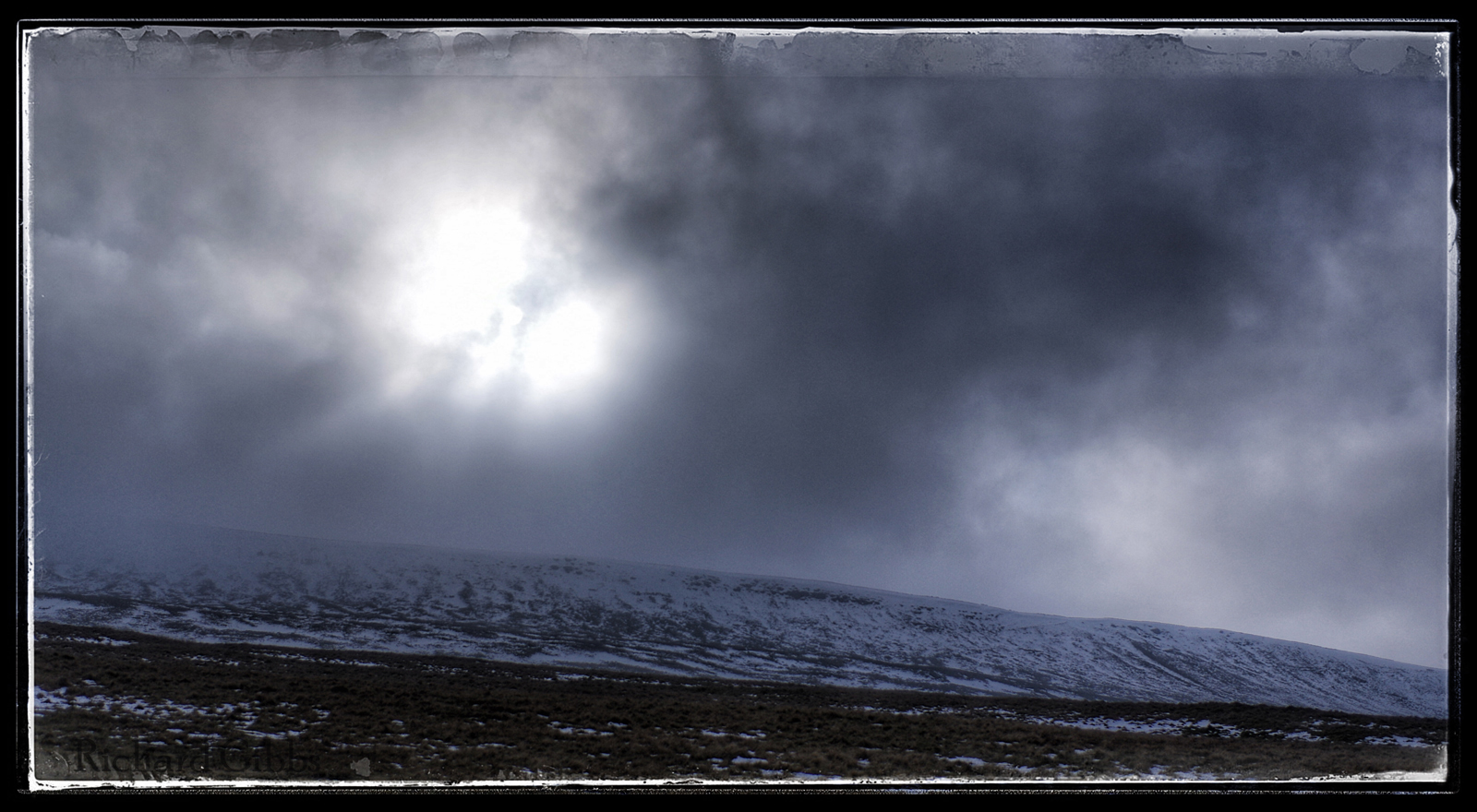 I walk with Joni Mitchell.  Somehow we have teamed up. I hold her 75-year-old hand and help her rise.  In 2015 she suffered a brain aneurysm, and she needs support. As we labour up her words spin through my foggy mind, her voice, now husky but still clear,  just audible.  Also with me on the track are three young deaf people, two girls and a boy, whose enjoyments of being out and about dance before us, putting selfie-obsession in context.

At the cairn at Bwlch Duwynt the easterly wind whips over the ridge, and I become acutely aware of my carelessness in having left my gloves in the car....  Too late now!  The temperature must be around freezing, though the wind chill factor brings that down several degrees.....

And in my anxiety Joni has slipped away.... 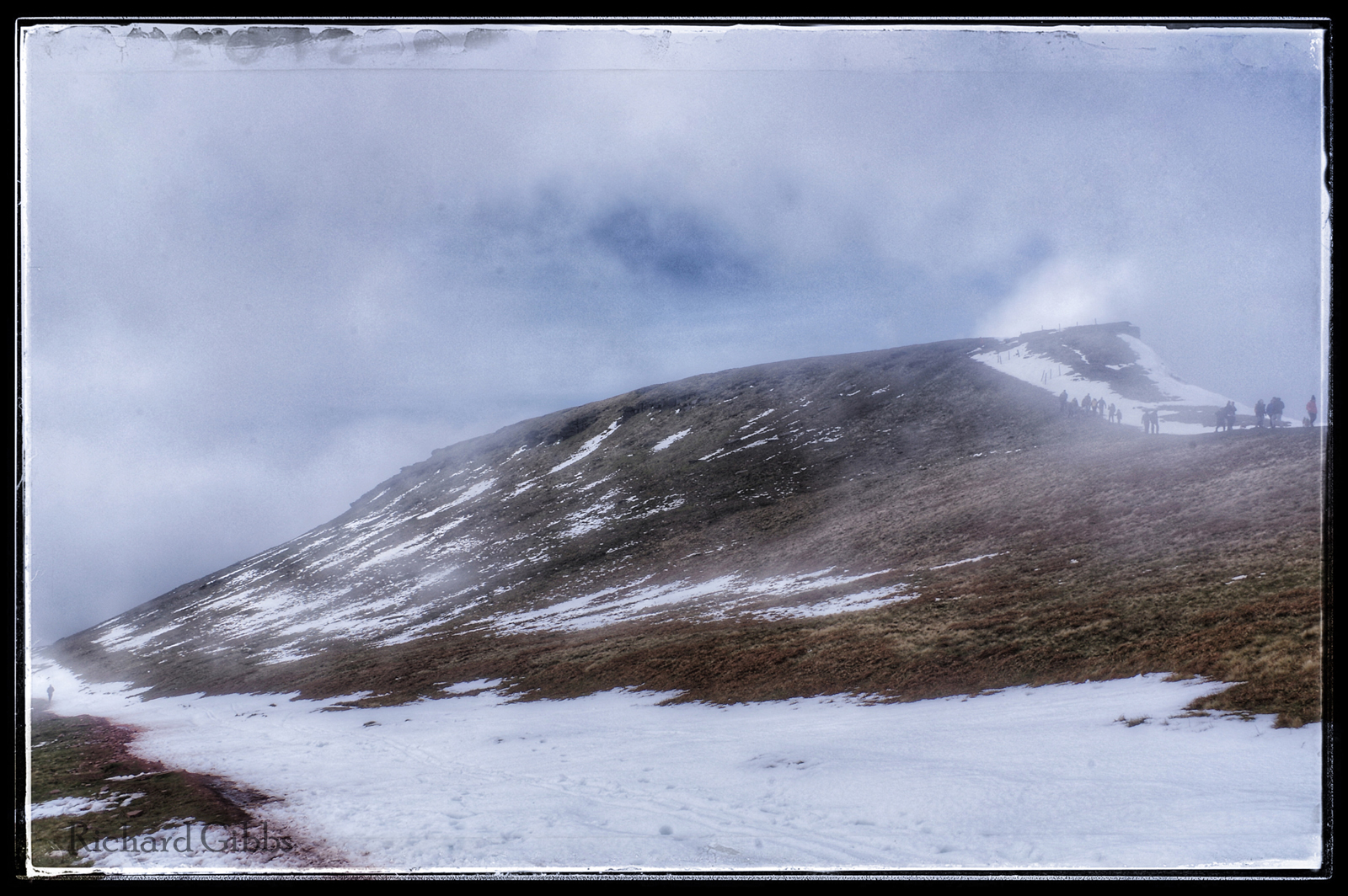 The path is snow and slush and it is a choice between wading through icy water or risking the slippery edge above the steep slope.  Clouds shroud the tops and chill air numbs my fingers, and hurts my lungs.... 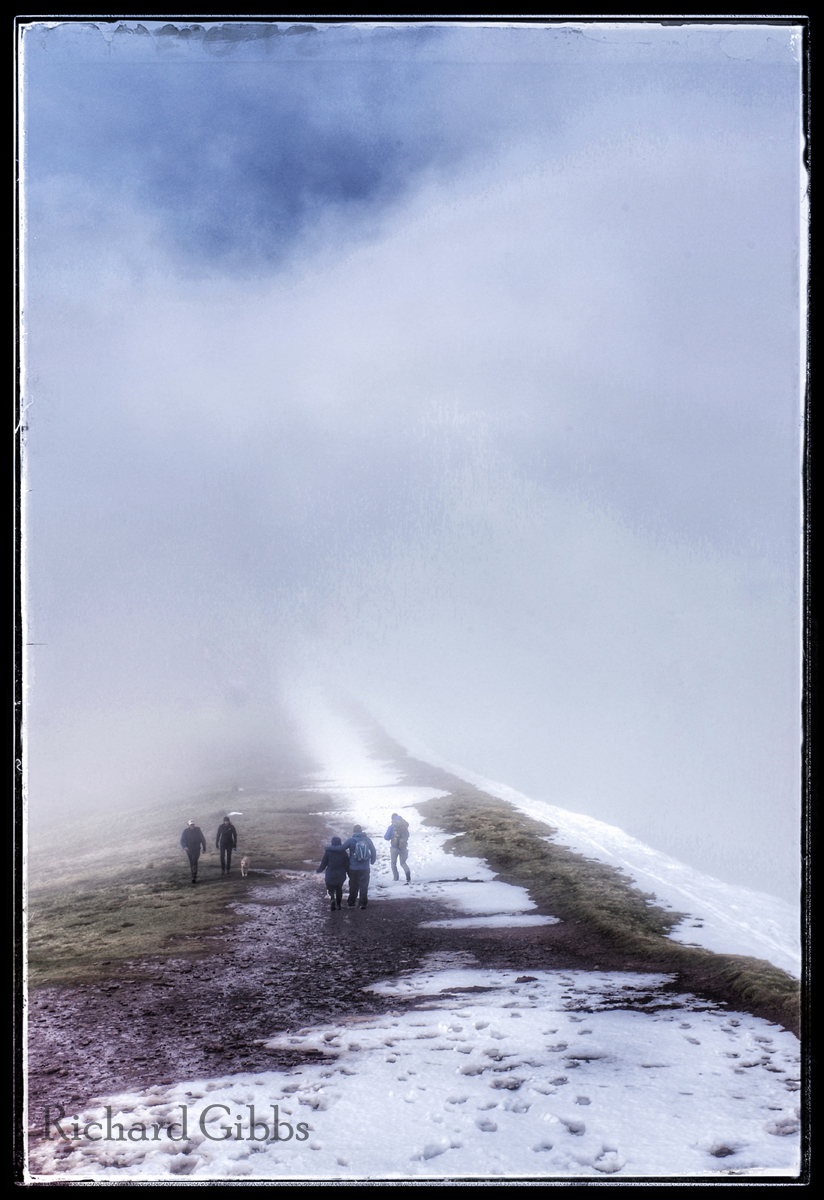 The summit drifts blearily into sight, the socialising crowds appearing and disappearing in the mist. Jon Snow's talk of so many white people in one place takes on (yet) another meaning.... until I look a little closer. 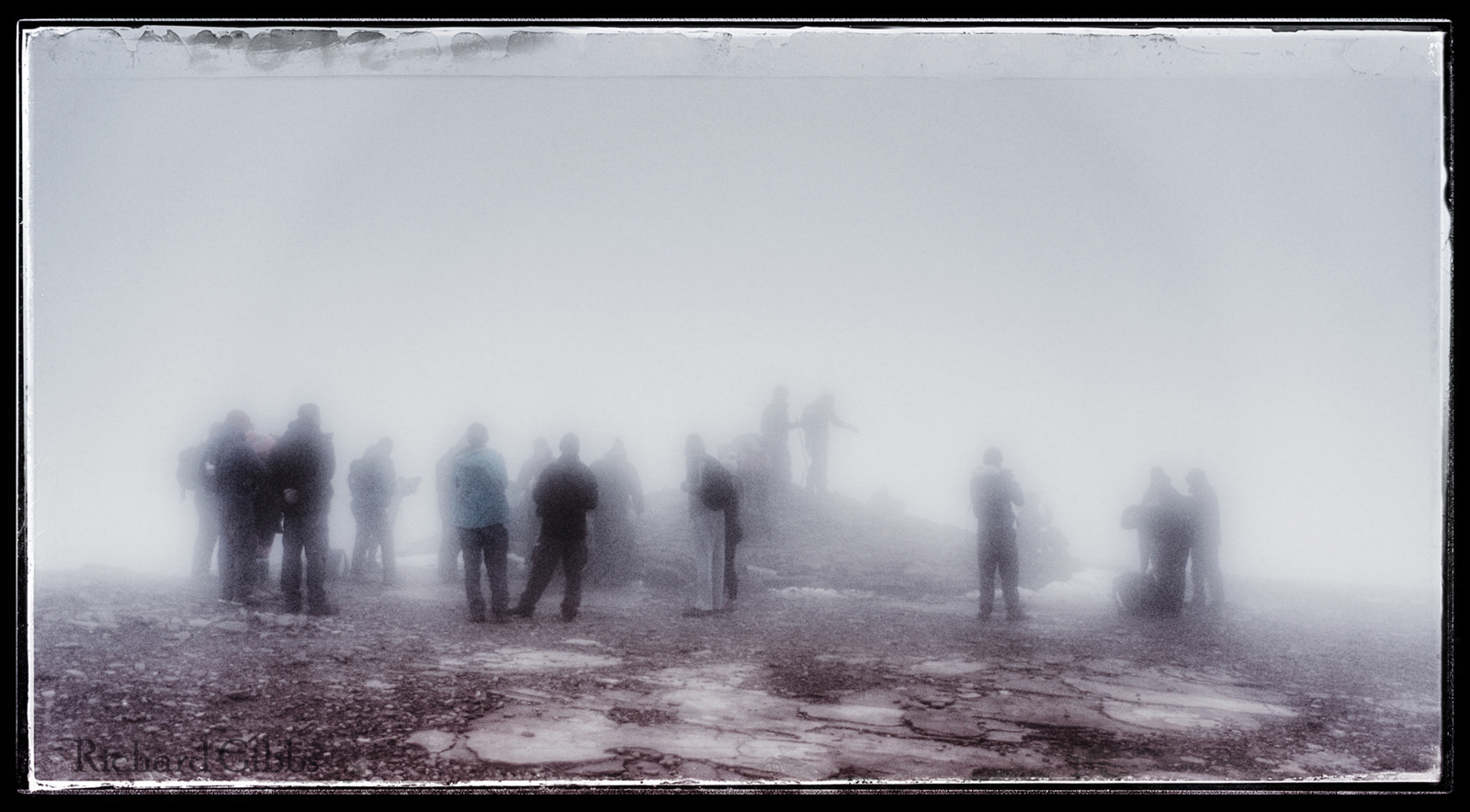 There are all sorts here, and it is highly social; people of all ages, and from varied backgrounds and countries, unite in a sense of achievement, an enjoyment of being on top of the world, despite (or perhaps because of?) the lack of views.

I am amazed at how many people have lifted themselves to this cold summit at this hour, and at the endless chains that are working their ways up (and at those who started earlier and are already on their way home, some even running....) I am struck by the sense of community that transcends any small-minded preoccupations that may have been left at home..... People talk to each other, help each other with their photos, discuss paths and exchange experiences.

She didn't used to be a cow, takes on a new value. I realise the women were not criticising their friend, but lamenting the fact she had changed, still loving her..... 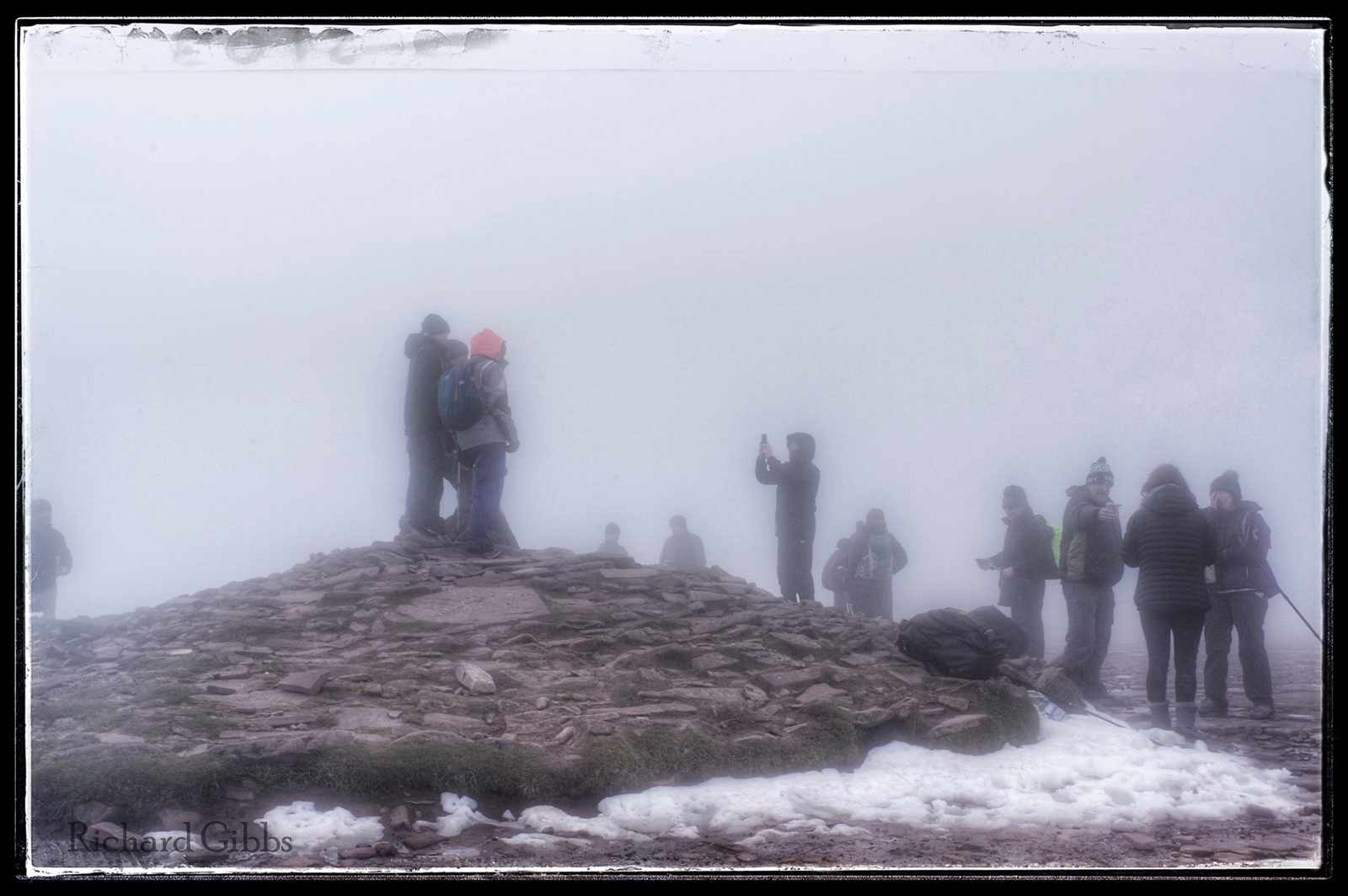 In these depressing times of division and stalemate, flecked with aggression and bigotry, it's good to mingle with people who have a shared goal. There is a spirit of common humanity here which raises my hopes. Perhaps, if the worst comes to the worst, this is how it could be? A group of survivors looking after each other in cold blind vapours on an isolated peak.

I've looked at clouds from both sides now
From up and down, and still somehow
It's cloud illusions I recall
I really don't know clouds at all....

On the way down, my knees taking the strain, the weather appears to lift.  Greetings are exchanged.  Someone gives me a jelly baby, others simply smile.  I wonder at the optimism of some, those in shorts, others in light plimsolls.  It's cold up there, I say.  The wind....  They smile.  They're young, and full of hope.....

Joni is waiting for me at the top of Y Gyrn where the view back up to Corn Du and Pen-y-Fan is superb. She smiles, then fades.  I hear her sing.... 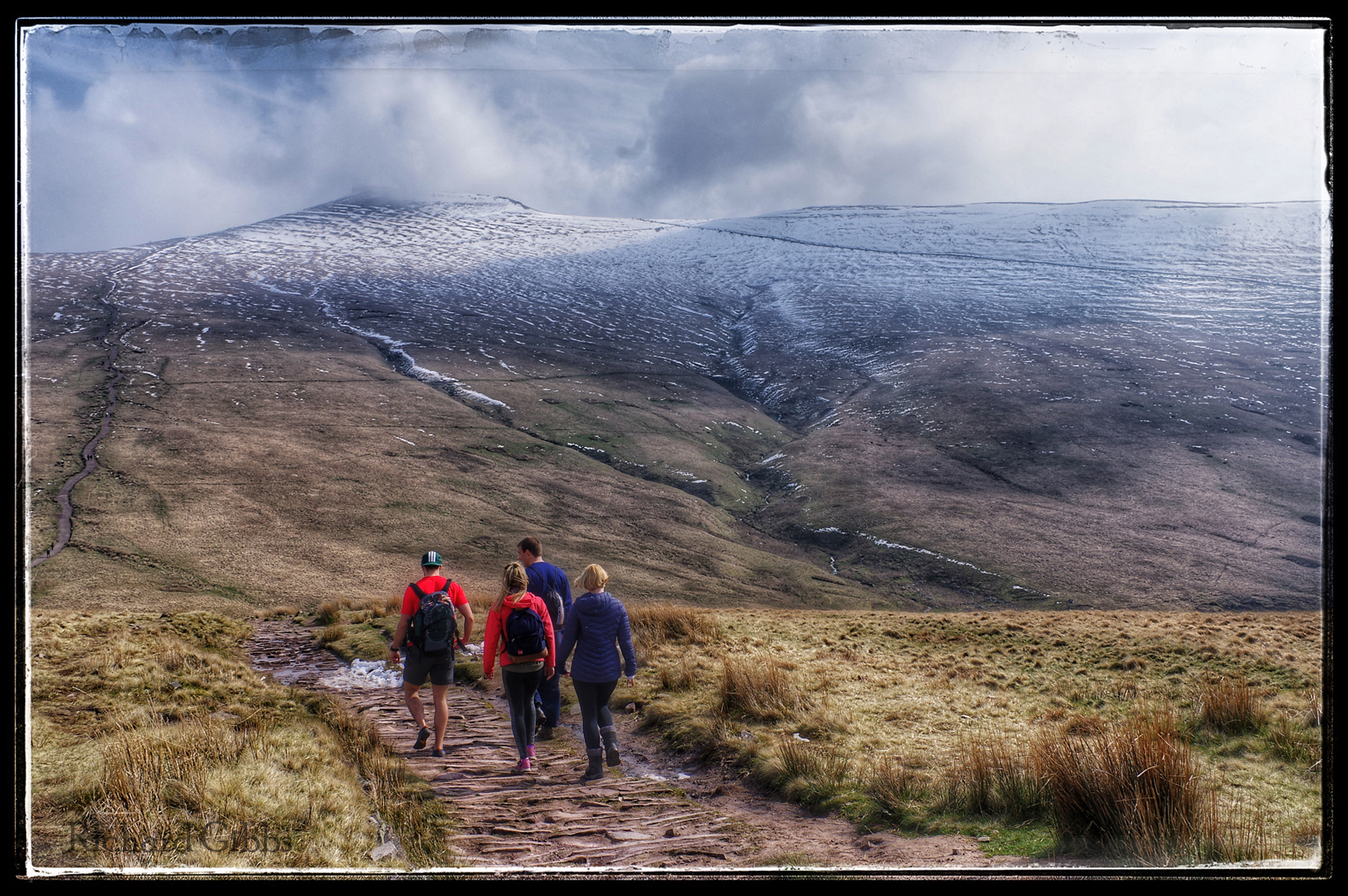 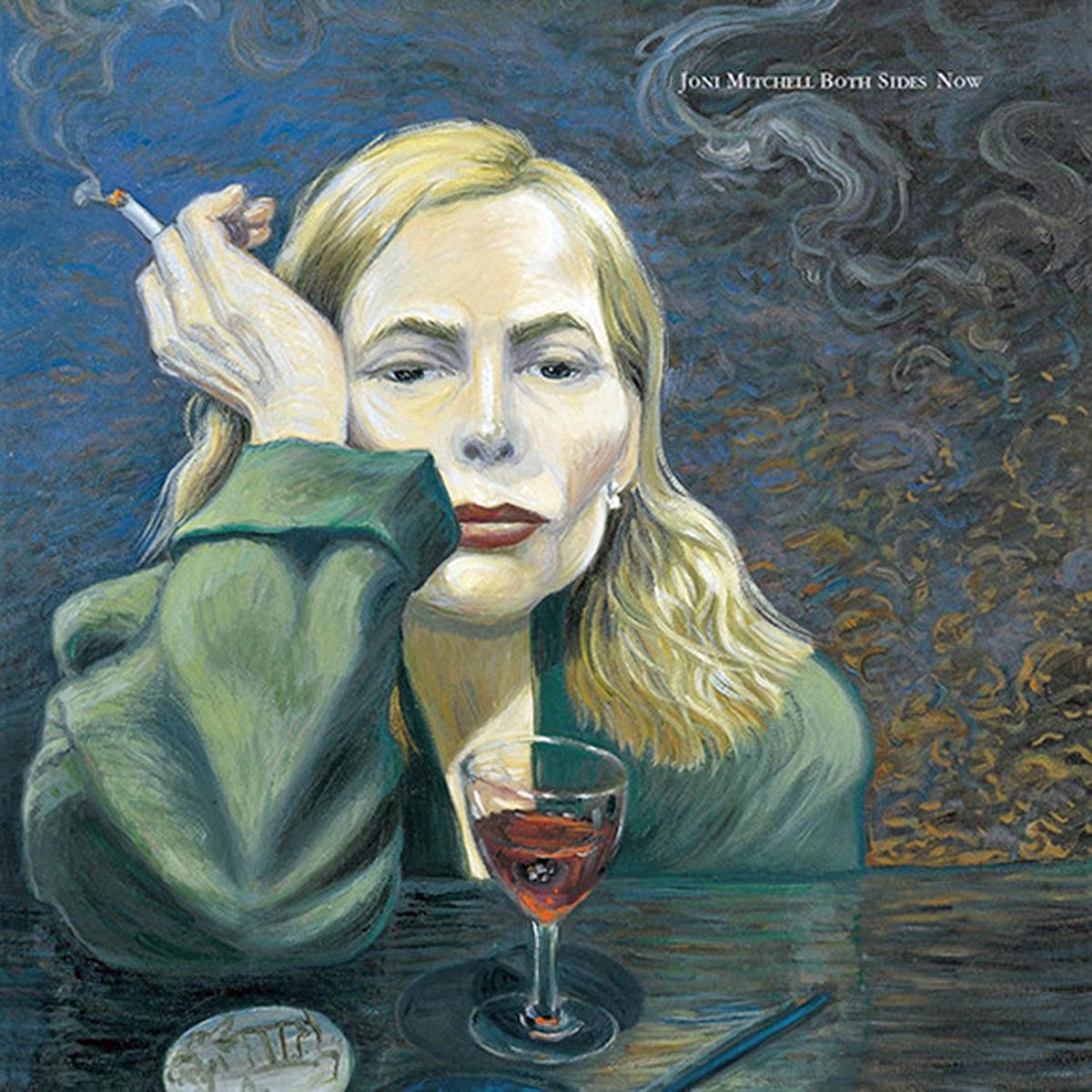 From Both Sides Now

I was reading a book, and I haven't finished it yet, called Henderson the Rain King. And there's a line in it that I especially got hung up on that was about when he was flying to Africa and searching for something, he said that in an age when people could look up and down at clouds, they shouldn't be afraid to die. And so I got this idea 'from both sides now.' There are a lot of sides to everything, and so the song is called "From Both Sides, Now."

Joni introduced the song this way at the White Swan in Leicester, England on September 16, 1967: 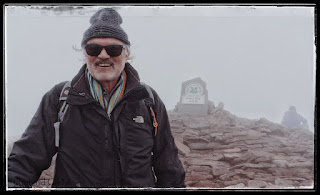 I realise I am not scared of death, though I don't really look forward to dying.  Pretty much everything else is in the clouds.  The attraction of the undiscovered country is obvious today on this leaderless plain, where the main religion is greed, but, despite that, there are still surprises to be had, and, as the lady says, there are two sides to most things..... Truth and illusion.....

Both Sides, Now was inspired by a passage from Saul Bellow's Henderson the Rain King: I dreamed down at the clouds, and thought that when I was a kid I had dreamed up at them, and having dreamed at the clouds from both sides as no other generation of men has done, one should be able to accept his death very easily.

She came in through the bathroom window.....

I am in Tate Modern, that vast and powerless monument to control, peering through windows.... I am enjoying The Colour of Memory, the C C Land Exhibition. As the guide points out, The paintings of Pierre Bonnard (1867 - 1947) create a remarkable sense of intimacy. Many of them allow glimpses into a private world, depicting the domestic life that Bonnard shared with his companion, Marthe de Méligny.

There aren't many connections, perhaps, between Pierre Bonnard and Philip Larkin, but some link fizzes through my mind. Larkin, apart from anything else, may not be best remembered for his use of colour, but the records of daily life, and the way things are remembered and reimagined perhaps link the poet and the painter, as does the use of windows (and that's not pc).....

But, just maybe, one informs the other?

I think I see the poet leaning on the railings, looking down.... Looking through windows is not necessarily voyeurism.  It's a way of framing experience, of playing with dimensions - even if only two.

In Nude in the Bath we see an out-of-focus figure in a dressing gown entering the frame. A Larkin-like Pierrot in his lover's bathroom, the light from the window filtering through the layers of their lives.  1925 was the year that Bonnard married Marthe, but it was also the year that Bonnard's other lover, Renée Monchaty, to whom he had proposed marriage in 1923, committed suicide.

The figure in the bath is not Marthe in 1925, but a younger Marthe, less tubercular, perhaps more as he wanted to remember her, to record their love....

While other people wore like clothes
The human beings  in their days
I set myself to bring to those
Who thought I could the lost displays.....

Paintings, especially framed ones, are windows onto other worlds.  Other times, other places.  People we never knew look back at us through openings in the walls, through glass, through time.  Again and again Bonnard's pictures step through a frame, and then through a window, colouring in lost days....

Yet still the unresting castles thresh
In full-grown thickness every May.
Last year is dead, they seem to say,
Begin afresh, afresh, afresh.


So similar.  So different.  A bottle of wine, half consumed.  A woman, half complete.....


I am not alone.  These window frames are focal planes for all, and sundry (sun dried, sic). We gaze, refreshed, through the openings at worlds we missed, yet which we love.

The woman in red here crouches as if to welcome the woman in blue, to invite her in; the seated man could almost be the painter, more aloof.....

And here, in southern France, the viewer watches over a reclining Bonnard, the roof of his house, Le Bosquet, in mid-canvas, the landscape of the distant Estérel mountains reflecting the shades of the viewer's clothing while Bonnard merges naked into the straw.....

When I drop four cubes of ice
Chimingly in a glass, and add
Three goes of gin, a lemon slice,
And let a ten-ounce tonic void
In foaming gulps until it smothers
Everything else up to the edge,
I lift the lot in private pledge:
He devoted his life to others.

And I walk through the windows..... 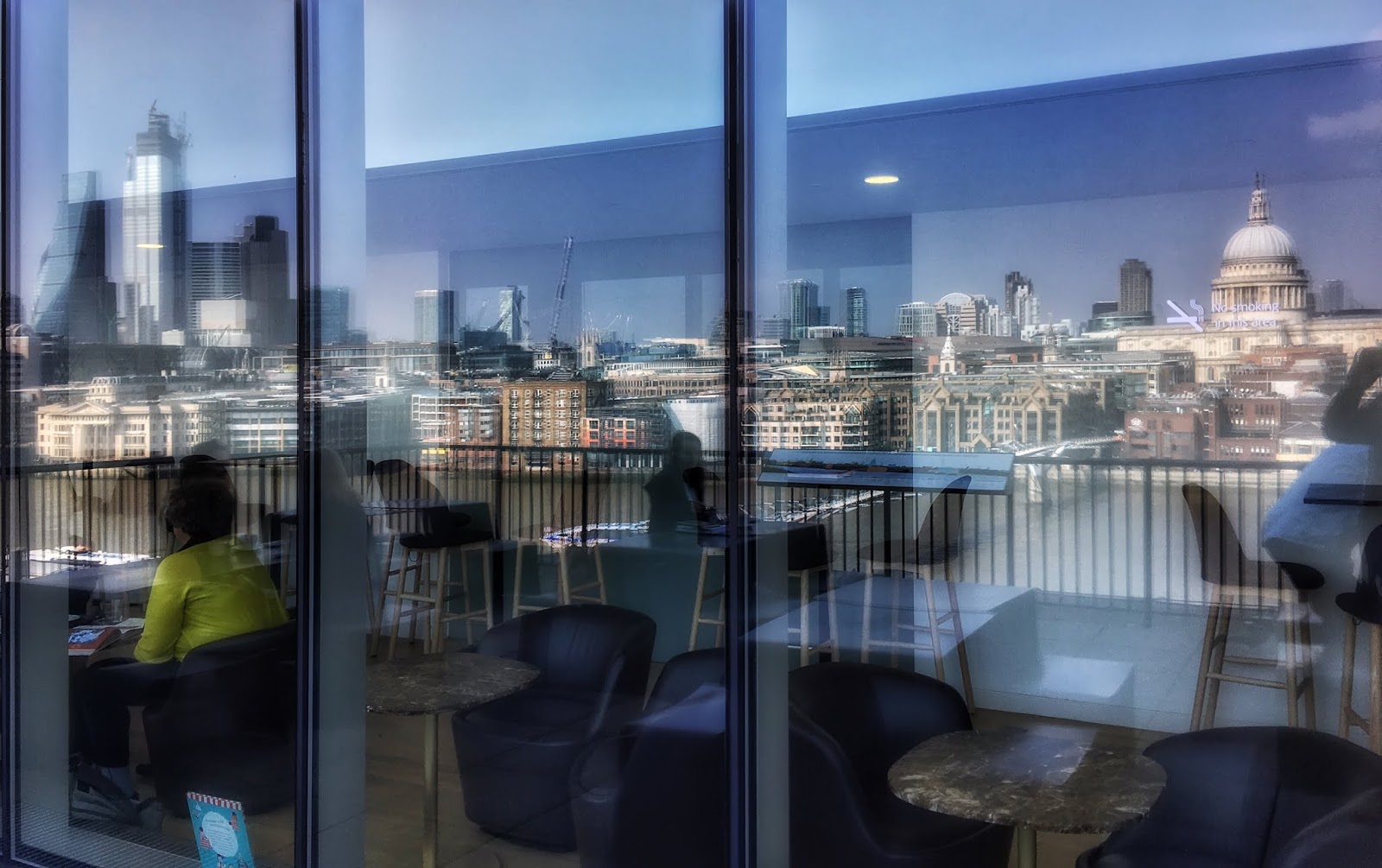 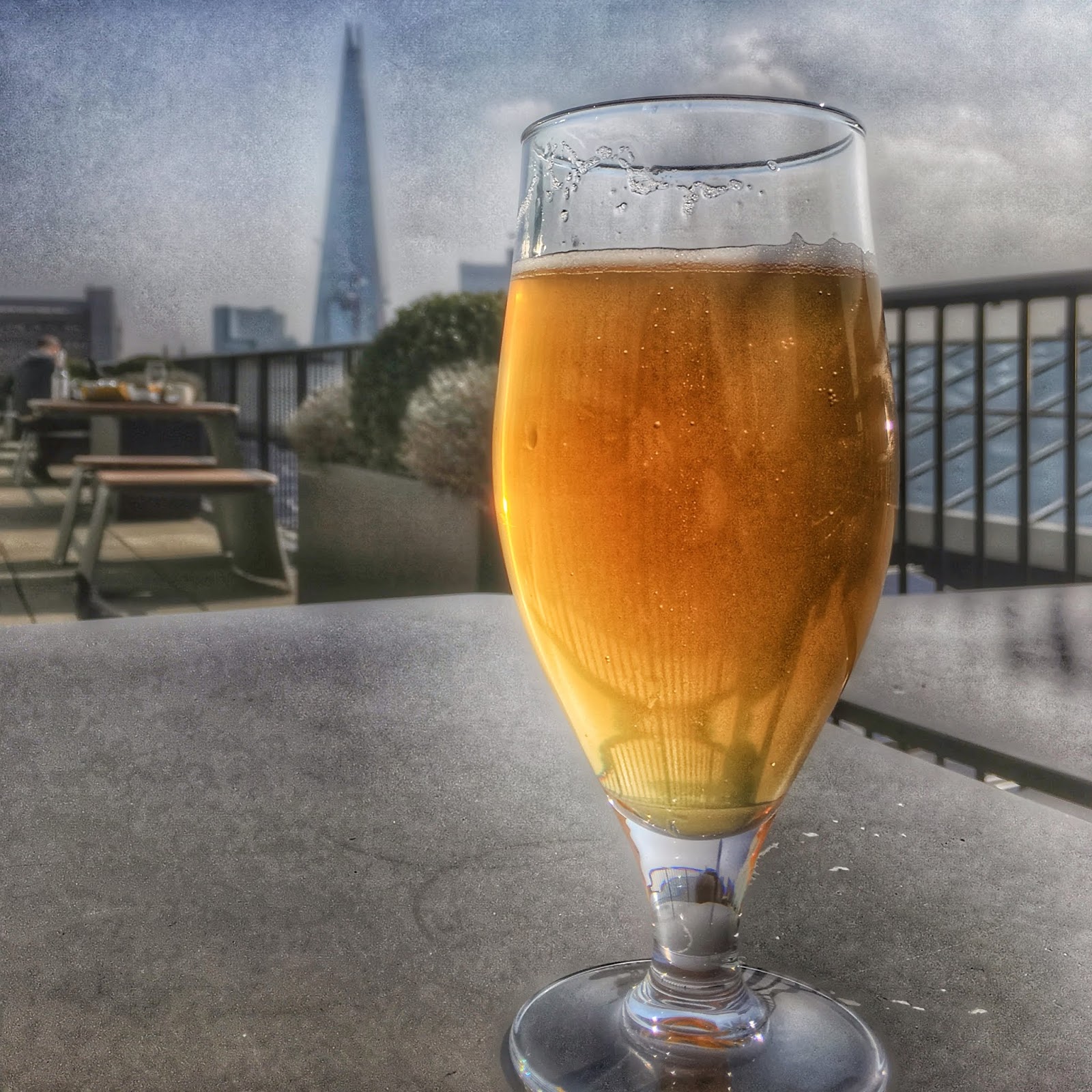 Though, again, I am not alone.  There are windows all around, reflecting, shining, framing all we are....

Or what we seem to be. 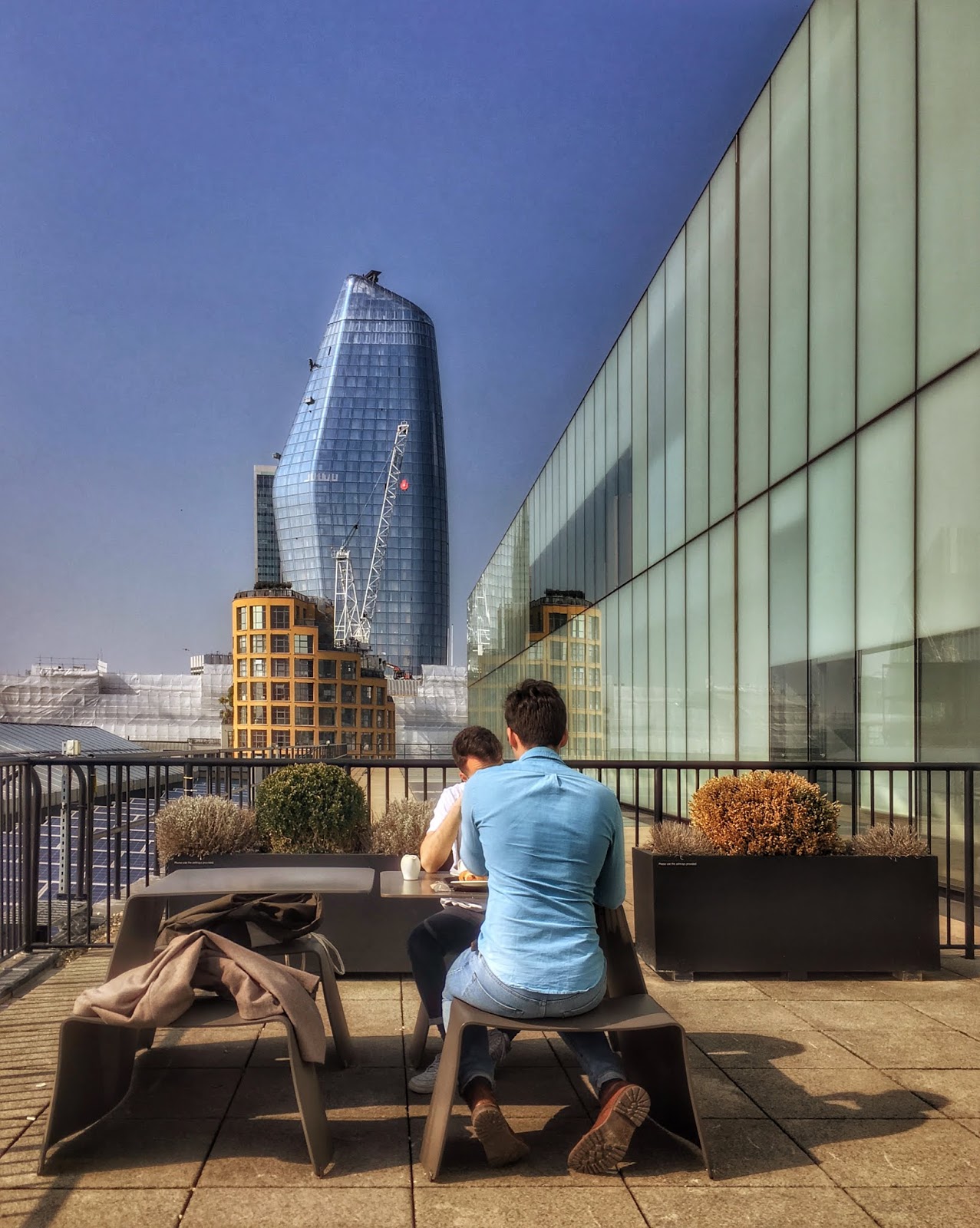 Way below, in the teeming Borough Market, the dance of life continues, the music indistinct, blurred by the shuddering of time. Nothing is fixed; nothing is certain; the actors play their parts, then disrobe, and, eventually, disappear.....

If Bonnard had had the absence of mind, he might have caught the scene, some years later. Larkin, too, could have gazed disconsolately upon the frantic antics of others more energetic than he, and, perhaps, have latterly written up a thought, and then we, the outsiders, the empty cataracts of existence, would have marvelled at what they saw..... 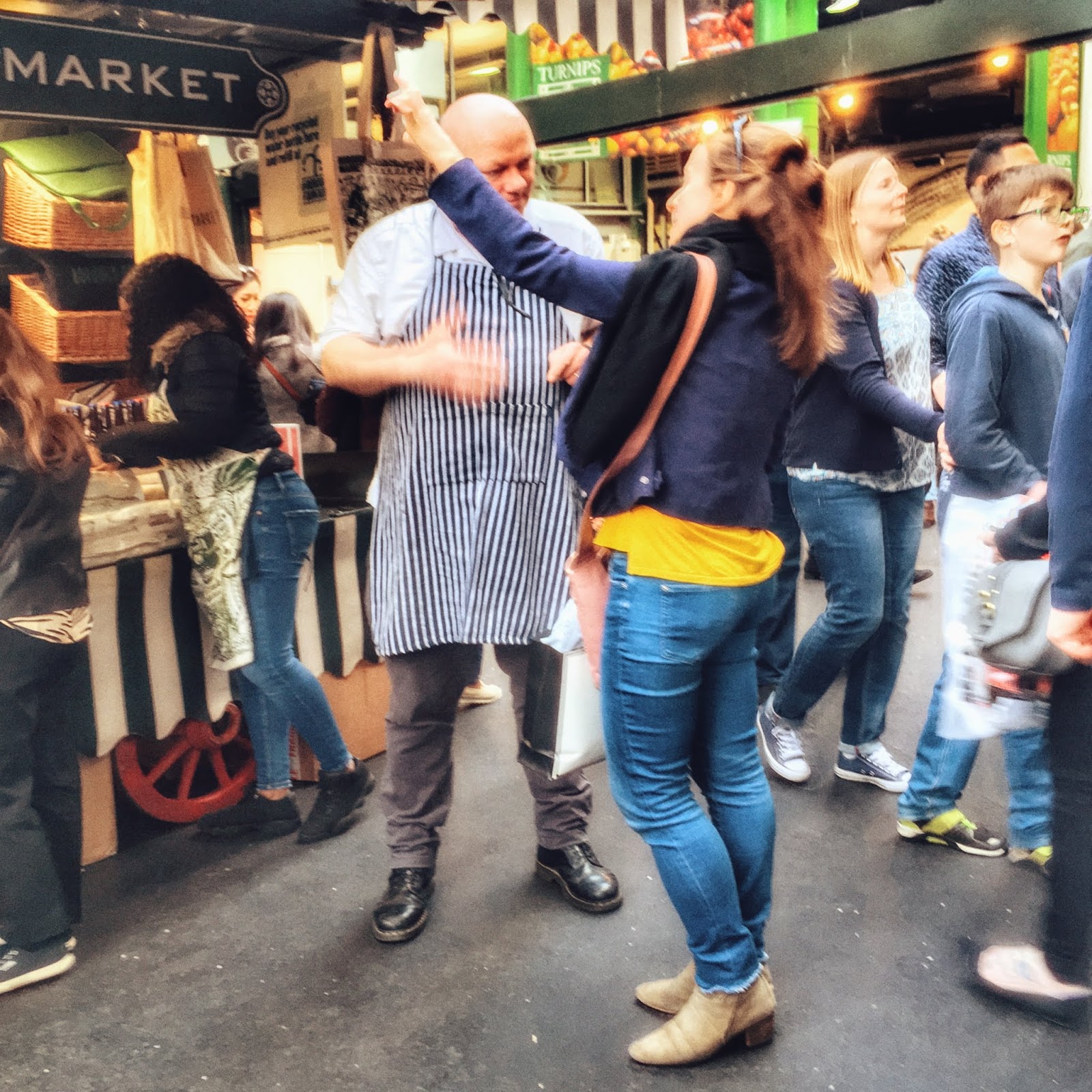 But it is quieter in the gallery.  In Normandy. I am drawn in by the blood red wall, the cat in the deckchair, the cat by the table, the jug on the shelf, the woman's red shirt against the distance, the simple meaningless of the moment. The meaningful moment of simplicity..... 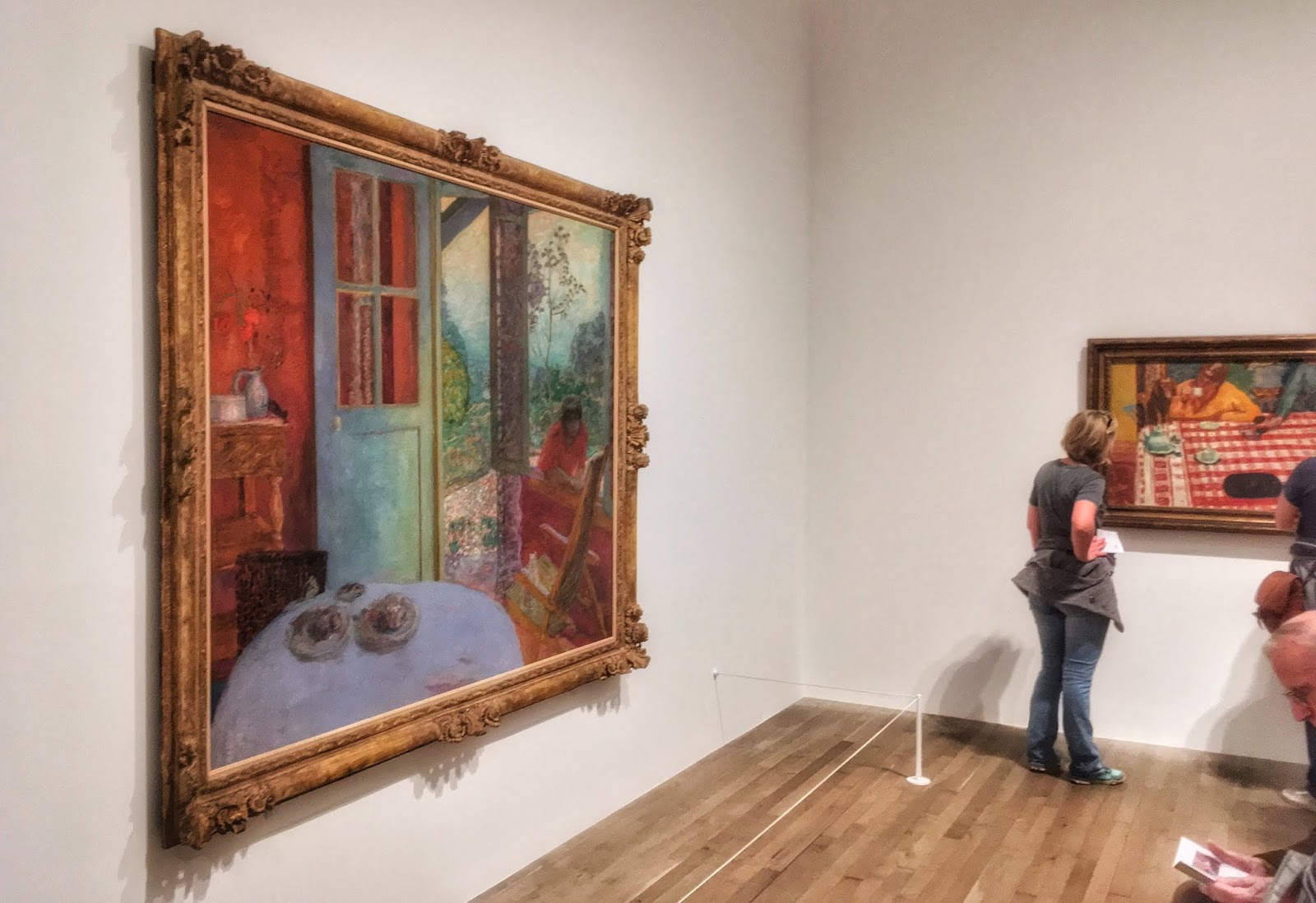 
Taking pills or wearing a diaphragm,


I know this is paradise

Everyone old has dreamed of all their lives—
Bonds and gestures pushed to one side
Like an outdated combine harvester,
And everyone young going down the long slide

To happiness, endlessly. I wonder if
Anyone looked at me, forty years back,
And thought, That’ll be the life;
No God any more, or sweating in the dark

About hell and that, or having to hide
What you think of the priest. He
And his lot will all go down the long slide
Like free bloody birds. And immediately

Rather than words comes the thought of high windows:
The sun-comprehending glass,
And beyond it, the deep blue air, that shows
Nothing, and is nowhere, and is endless.


Next year we shall be easier in our minds.


Homage to a Government
Philip Larkin


I am out of Tate Modern, a vast and uncontrolled monument to power, where I was peering through windows....  I very much enjoyed The Colour of Memory, the C C Land  Exhibition.  As the guide pointed out, The paintings of Pierre Bonnard (1867 - 1947) create a remarkable sense of intimacy.  Many of them allow glimpses into a private world, depicting the domestic life that Bonnard shared with his companion, Marthe de Méligny.


Man hands on misery to man.
It deepens like a coastal shelf.

This be the verse
Philip Larkin