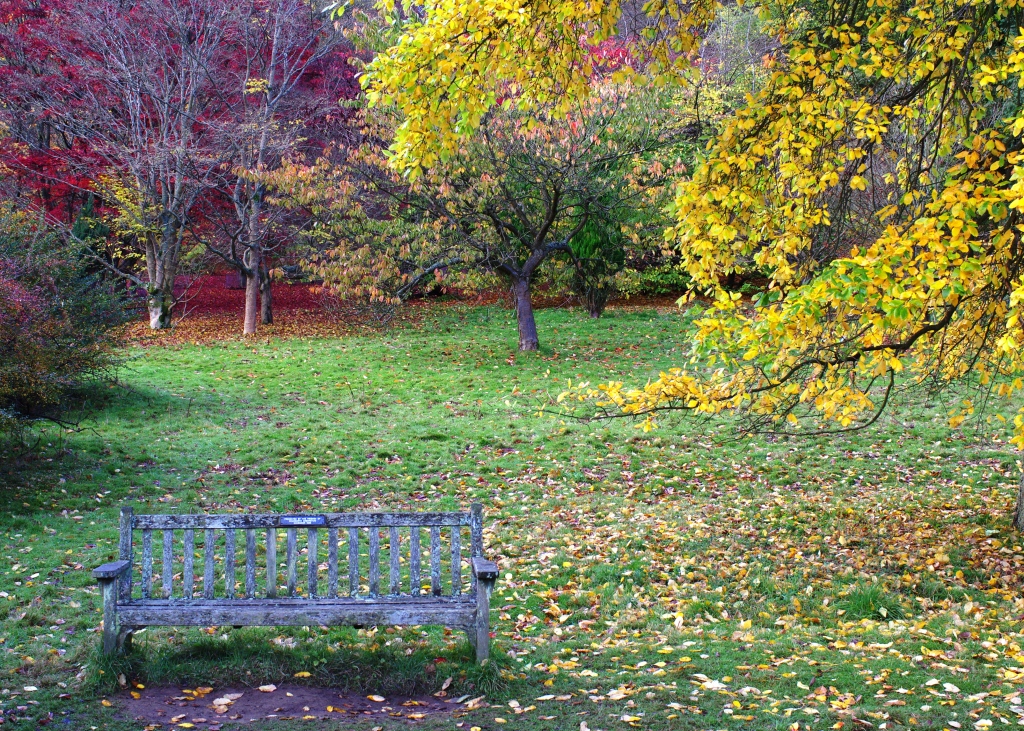 OK, so is far from Merrie!  And it probably never was.  In the days when it might have been a relief to catch the Black Death and tish-oo and fall down, it wasn’t Merrie.  It wasn’t Merrie when everyone either died of war or ‘flu.  It was hardly Merrie during the miners’ strike or the Tottenham riots, and when England didn’t win the World Cup, the Ashes or Wimbledon all at the same time what could there to be Merrie about?

OK, there were some Olympics, I suppose.  But if we need Queen Elizabeth II to jump out of a helicopter to cheer us up, then things are pretty desperate (and who would not rather see Cameron do it than poor old Bessie – at her age, really!  I mean, what’s a Prime Minister for?)  {Boris would have done it!}

OK then, think of the good things.  Peter Rabbit.  Postman Pat.  The Hobbit.   The Eurostar to .  Llama trekking in the Surrey Hills (I’ll come back to that)…..  The list could be longer…..

If put on the rack, I guess, most people would confess to something favourite about this little country, and if we analysed e-book sales, tv ratings, twitter feeds or youtube hits, we might come up with “the truth.”  But that truth would probably lead us to assume that the favourite thing in this country actually originated in the …..

So, allow me to propose something.  Allow me to suggest that actually, really, truly, there is plenty Merrie about Old England and folks like thee and me can cheer ourselves up with relatively little effort or expense. 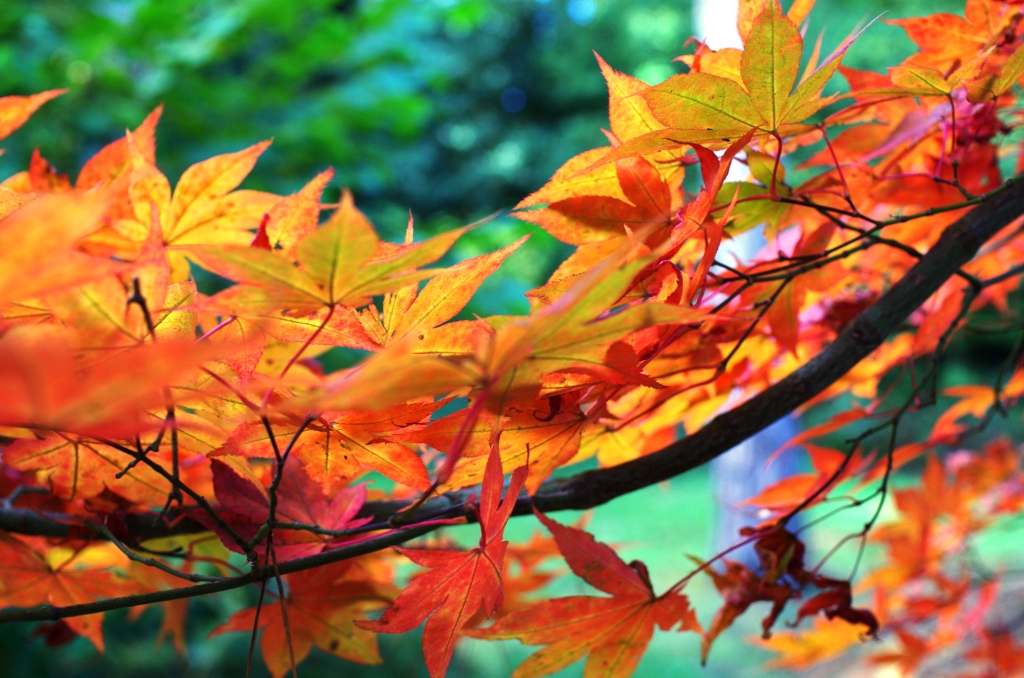 So, for starters, given that it is autumn, whatever the weather, let’s go outside…..  What we need is some anthocyanin.  This is what creates the red and purple pigmentation in, for example, maple leaves when the nights get longer and the trees no longer produce chlorophyll for photosynthesis (so trapped sugars need to be converted into anti-oxidants).  In some trees, the loss of chlorophyll simply exposes the xanthophylls, which are the yellow pigments, or the carotenoids, which are the orange colours, and so, in the shorter days of autumn, we get such beautiful displays. (When it becomes really cold, or when the leaves have fallen, these pigments decay and all that is left are the dark browns of tannin.) 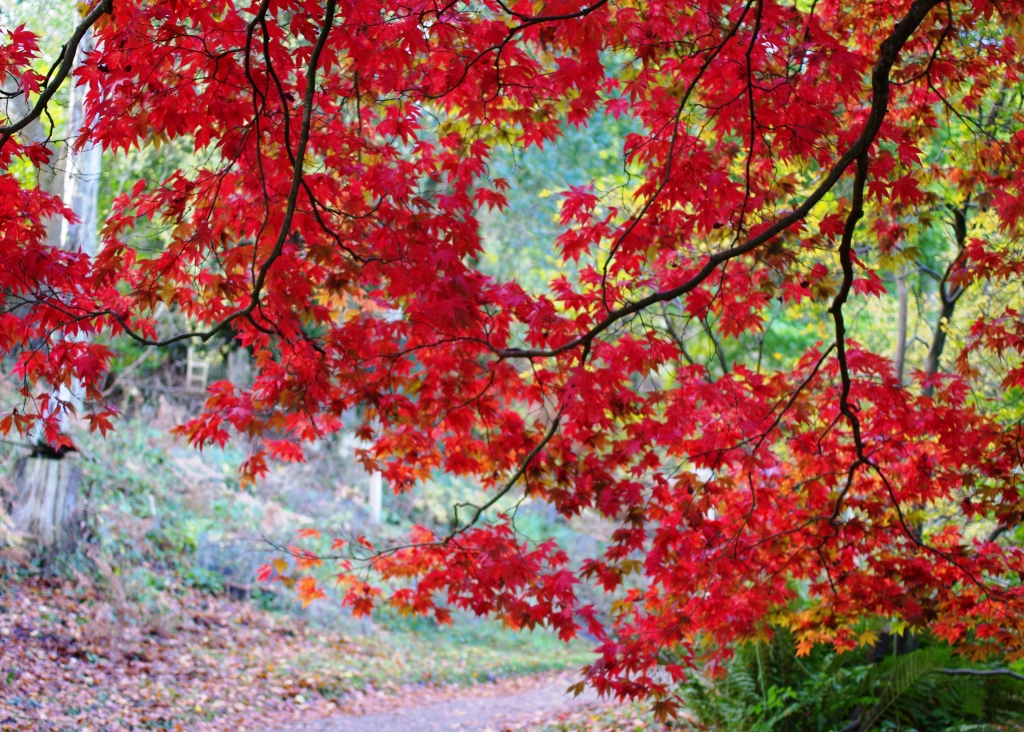 So it’s off to the 100 acre wood, or the wild wood, or any wood.  It will need to be deciduous woodland, preferably mixed broadleaf etc, but it doesn’t take much to put on some boots and explore.

When Winston Churchill wanted to unwind he would trip down to Chartwell, where he could breakfast overlooking sublime views of lake and woodland towards the Weald.  He knew a good place to be!  Not that far away, in , is Winkworth Arboretum, with pathways through the trees and round the water.  Dr Wilfred Fox acquired the site in 1937 and, having planted a variety of species of trees, including maples from , and , he bequeathed the 46 hectares to the National Trust in 1952 for all to enjoy at any season. 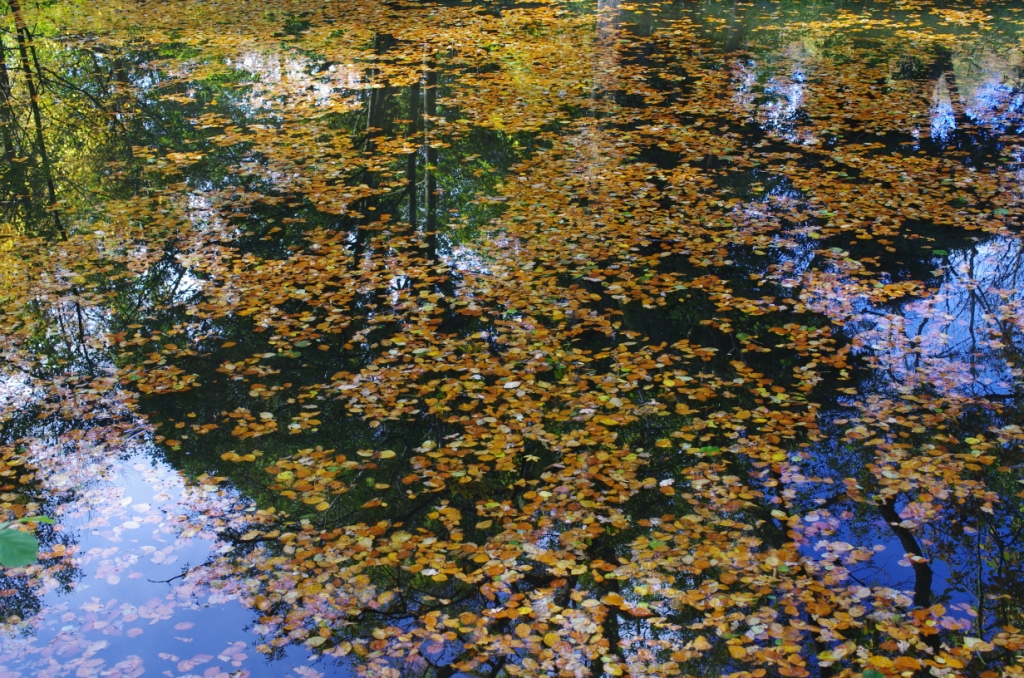 Which is exactly what we do, peacefully breathing clean air, disturbed only by the honking of a gaggle of geese and the quacking laughter of a giggle of ducks.  The leaves flutter in all shades in a tapestry of natural colour so different from the bricks and concrete of our city lives that we are silent with joy. 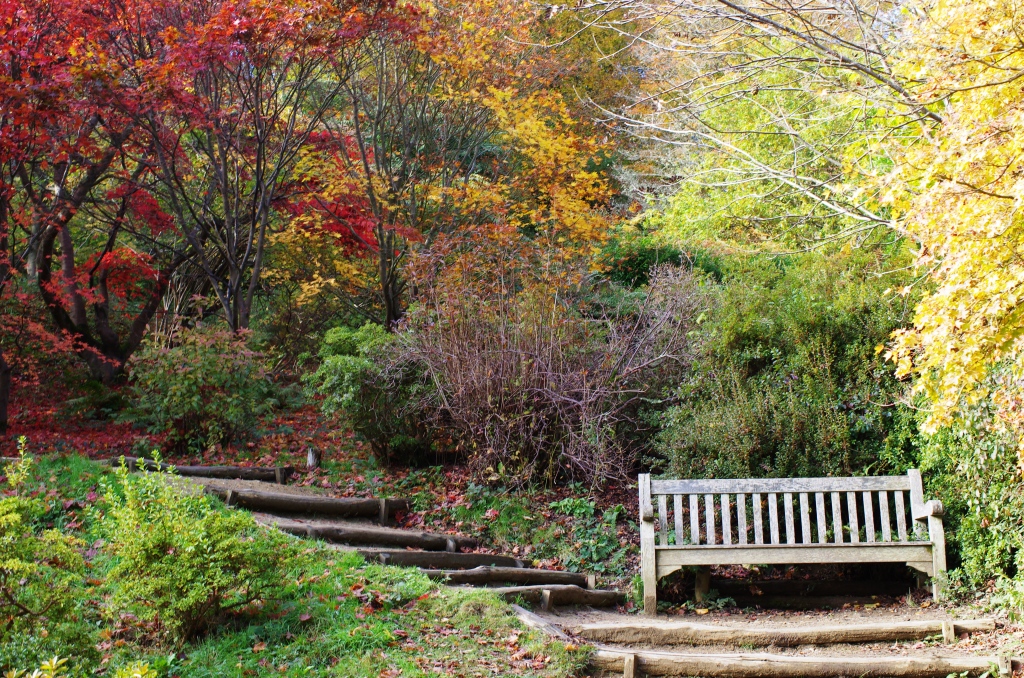 Suitably buoyed up by the irrepressible delight of nature, we move on to the nearby Octavia Hill walk from Hydon’s Ball and Heath. Octavia Hill, who died in 1912, was a co-founder of the National Trust and, as Tristram Hunt says, “One of the greatest social entrepreneurs in British History.”  She is commemorated in this Surrey Hills Area of Outstanding Natural Beauty by a stone seat at one of the highest points in Surrey, from which there are views looking south towards Black Down and the South Downs. 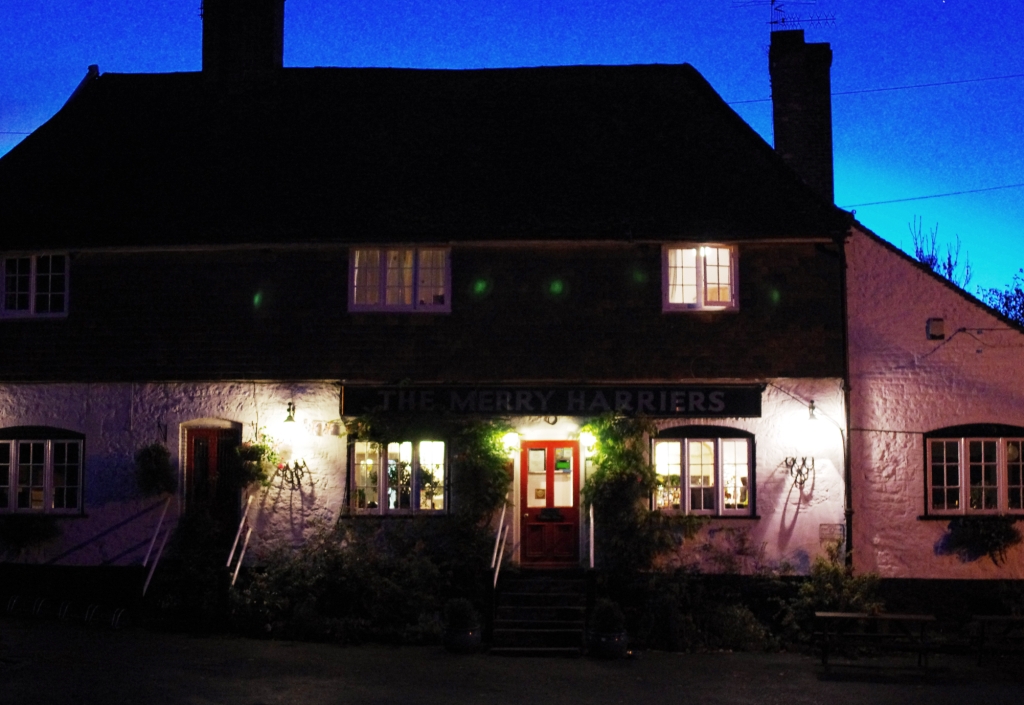 As the day begins to fade we need to find creature comforts and a place to rest. And, by chance, it is only half a mile from here down to the where for four hundred years there has been a pub.  Although until about four years ago it was a relatively unkempt bikers’ haunt, it has been given renewed life by Colin and Julie Stoneley.  We are warmly welcomed and, at the Merry Harriers, find another aspect of Merrie that should be preserved by law.  A comfortable room in an outhouse, disturbed only by the snuffling of a herd of llamas (I’ll come back to them) in the field outside, and a tasty supper of local food from an imaginative menu (just about everything is sourced locally) in front of a fragrant log fire (those anthocyanins burn so well!) with a pint or three of decent ale.  There's a buzz in the bar as locals unwind and refresh.....  How could we not be Merrie! 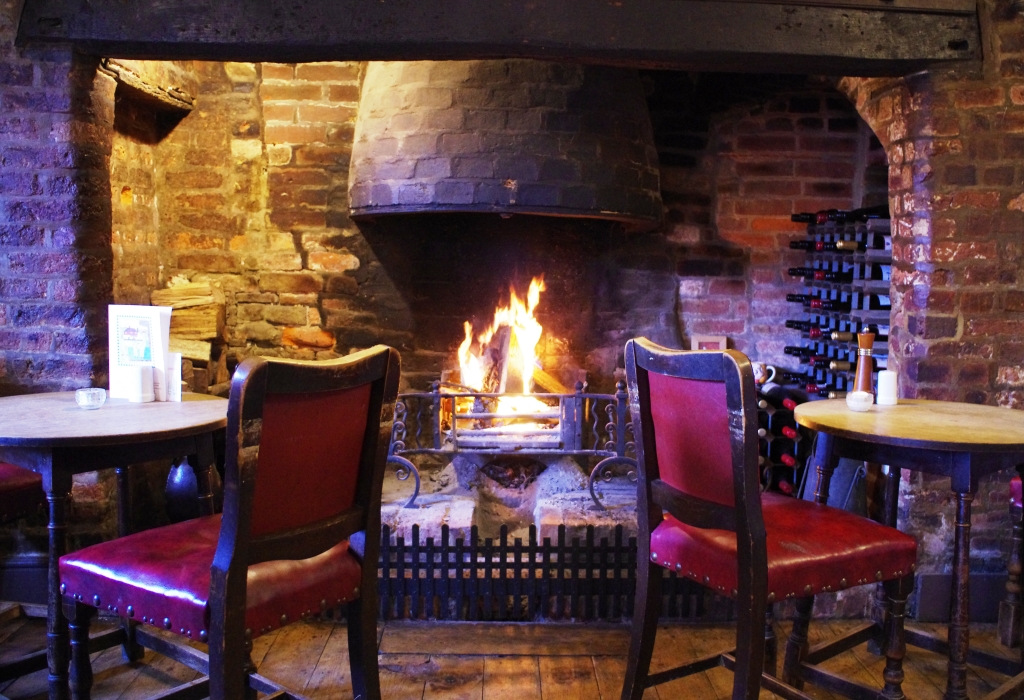 So what is this about llamas?  In ?  At the time the pub came on the market the Stoneleys were looking for somewhere to keep their llamas (which were part of their yarn and fabric business interest) and so it all came suddenly together for them.  Now The Merry Harriers is the base for Surrey Hills Llamas, which organise individually tailored llama treks through the local countryside, a perfect way to celebrate the eccentricity that can make England Merrie! 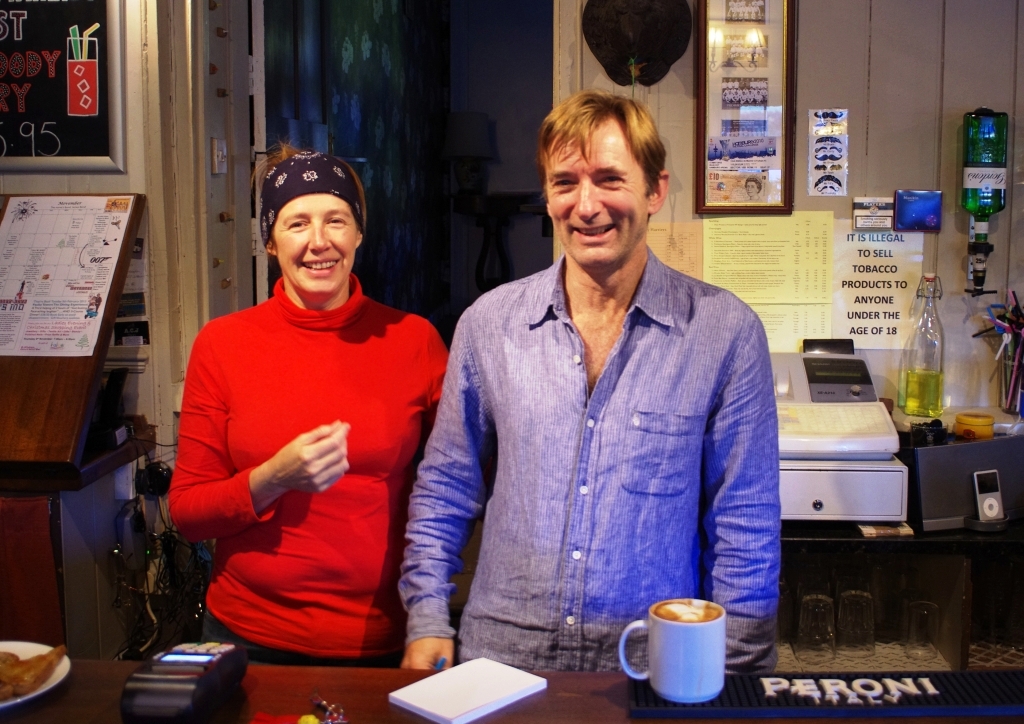 In our case, we just sleep in the cosy company of the llamas. Then, happily restored, we take a leisurely Merrie English breakfast in front of the blazing hearth (those carotenoids and xanthophylls perfuming the air), with jam and eggs and real tea (ok that’s not local!) before reluctantly heading towards the crock at the end of the rainbow which is home…...  Merrie at last, whatever the weather! 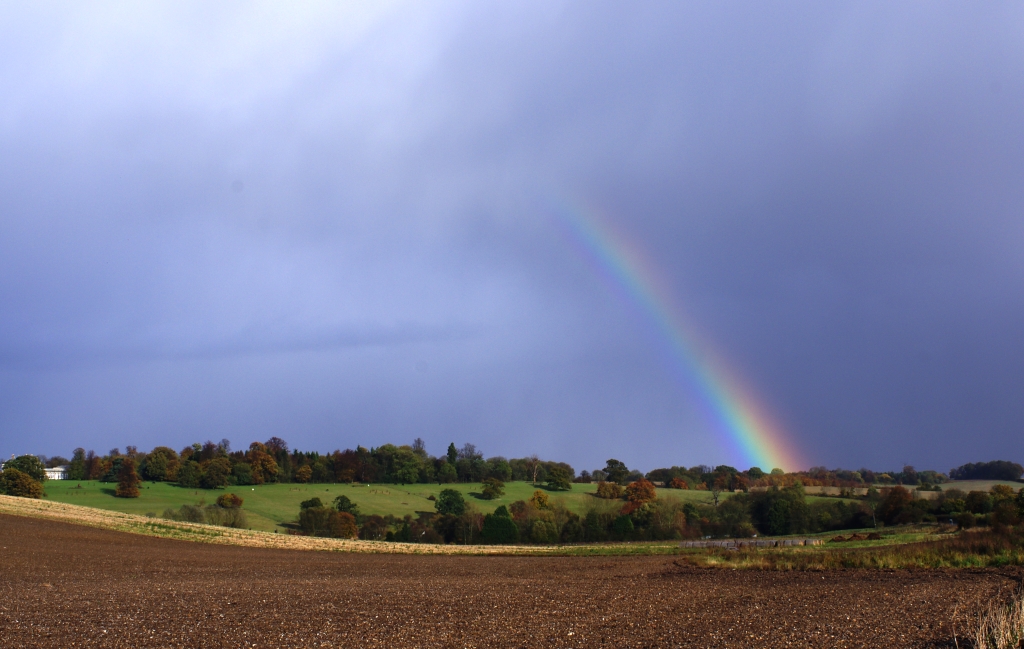