A Nocturnal upon St Lucy's Day 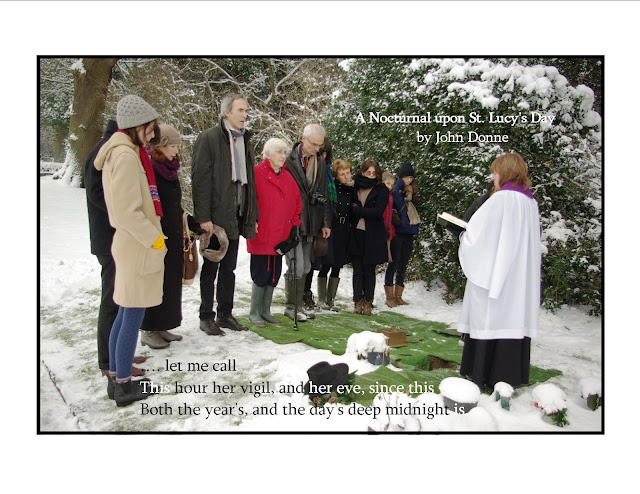 The days gather, hemmed in by dark space, dark matter.  Our rocky orb careers through nothing, going nowhere, rocking from light to dark, warm to cold, tilting at windmills in celestial orbit, while we struggle with pain and ignominy in thrall to the gravitational force that pins us to the surface of this world.

Two whole years ago, themselves pure figments of maths, calculations that only relate to the space-time continuum of our spinning round the sun, itself spinning in the constellation which spins in relation to other bodies, other galaxies.....

Two years ago my family gathered in the cold and snow to inter my father's ashes.  We had been through the process of death and accepted the conflagration of cremation.  Now, in the presence of a priest, in the vicinity of woods where my brothers and I had played as children, we watched ash and earth combine.  No joy entailed, no great spirit of hope, but as a common denominator I guess we were relieved that the suffering was over, and that life, as our father had wished, would go on.

A NOCTURNAL UPON ST LUCY'S DAY,
BEING THE SHORTEST DAY
by John Donne
'Tis the year's midnight, and it is the day's,
Lucy's, who scarce seven hours herself unmasks;
The sun is spent, and now his flasks
Send forth light squibs, no constant rays;
The world's whole sap is sunk;
The general balm th' hydroptic earth hath drunk,
Whither, as to the bed's feet, life is shrunk,
Dead and interr'd; yet all these seem to laugh,
Compar'd with me, who am their epitaph.

Study me then, you who shall lovers be
At the next world, that is, at the next spring;
For I am every dead thing,
In whom Love wrought new alchemy.
For his art did express
A quintessence even from nothingness,
From dull privations, and lean emptiness;
He ruin'd me, and I am re-begot
Of absence, darkness, death: things which are not.

All others, from all things, draw all that's good,
Life, soul, form, spirit, whence they being have;
I, by Love's limbec, am the grave
Of all that's nothing. Oft a flood
Have we two wept, and so
Drown'd the whole world, us two; oft did we grow
To be two chaoses, when we did show
Care to aught else; and often absences
Withdrew our souls, and made us carcasses.

But I am by her death (which word wrongs her)
Of the first nothing the elixir grown;
Were I a man, that I were one
I needs must know; I should prefer,
If I were any beast,
Some ends, some means; yea plants, yea stones detest,
And love; all, all some properties invest;
If I an ordinary nothing were,
As shadow, a light and body must be here.

But I am none; nor will my sun renew.
You lovers, for whose sake the lesser sun
At this time to the Goat is run
To fetch new lust, and give it you,
Enjoy your summer all;
Since she enjoys her long night's festival,
Let me prepare towards her, and let me call
This hour her vigil, and her eve, since this
Both the year's, and the day's deep midnight is.


John Donne, famous for his loving, famous for his sermons at St Paul's, wrote about love, and life, and drew upon his wit and understanding to give us all some hope.  This poem is about love and loss, darkness and light, and uses words from the alchemist's handbook - limbec, quintessence, flasks, balm, elixir....  But it is not about failure, though it is about darkness.  There is some hope - I am re-begot.....

It's nothing new to observe that things cannot get worse.  The concept of the shortest day informs the idea that actually there is always going to be a regeneration, a rebirth. St Lucy, virgin and martyr, is the patron saint of blind people, partly because of her name's association with light and partly because she is often depicted in art as having her eyes upon a plate (her name is invoked to cure eye disease) and although her saint's day is December 13th, the proximity of this to the solstice and the symbolic connection with darkness excuses any confusion.  We are in the dark depths of winter - perhaps not the worst, yet, as the drawing out of January and the brief gloom of February are still to come - but it is the time when looking forward is so much better than looking back.....

The family gathered to inter my father's ashes at Kingshill Cemetery, Berkhamsted, on the shortest, darkest, coldest day of 2010.