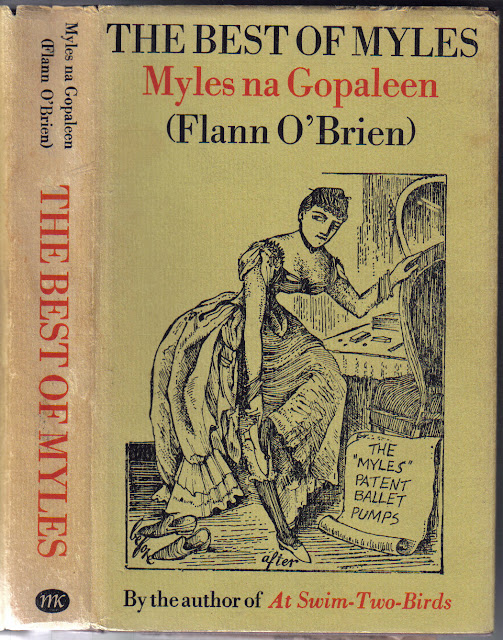 It’s funny how the past slips through your fingers.  Just when you think you are at the moment, it’s gone.  Only the other day I was in Neary’s writing something (or other) when who didn’t buy me a drink?  Well it wasn’t Brian O’Nolan, 101 years old and still assuming the name of Sir Myles na gCopaleen (the da).  Oh, the number of times we haven’t spoken!  Incipit Crusculum Lan!

Well it was his round.  I would have bought him one in Peter’s Pub (sadly since much changed), another of his haunts, when I was first exploring bars in 1967, but he didn’t turn up.  And the excuse?  He’d died the year before?  How often have we heard that one?  And I had just spent the night on a concrete slab outside the public toilets in .  And yes, the jumper I wore did bear a strong resemblance to “buff-coloured puke.” 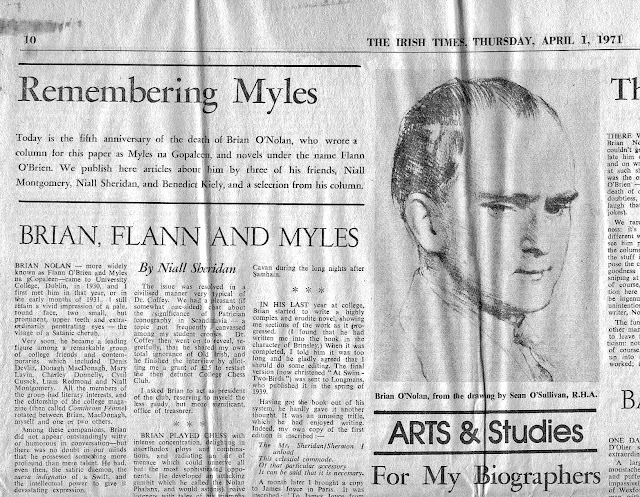 So it was in 1971, on one of my many happy returns, that I purchased a copy of the Irish Times which I still have today, yellowed and creased into the folds of my copy of “The Best of Myles.”  It still seems only the other day.  Time plays those tricks.

I was, in those years, enamoured of Irish Literature, and felt that the Quays on the Liffey could open the doors to enlightenment.  “The Book of Kells,” one page turned a day, was a must to see in the Old Library of Trinity College.  “Ulysses” was a must read (and the Bailey in Duke Street a must see, as they held the front door of Bloom’s house at 7 Eccles Street there – though now it’s at the James Joyce Centre and the Bailey has been transformed) and the Martello Tower at Sandycove a must visit (though the Forty Foot was actually a must avoid…..)

I took Joyce’s conundrum to cross without passing a pub at its literal value, and never passed a pub.  McDaids still echoed to the laughter of the Borstal Boy, even though he died in ‘64.  Fluther Good was playing cards in “The Plough and the Stars” (“Keep a sup for to-morrow?  How th’ hell does a fella know there’ll be any to-morrow?”)  Brian Friel’s “Lovers” were playing at the Gate Theatre – I know; I saw them (August 21st 1967) – and Siobhán McKenna was Juno (at the Gaiety in ’66 and at the Abbey in ’80), with the whole worl’ around her in “a terrible state o’ chassis.”

I even ventured into the Celtic Twilight, romancing in Stephen’s Green and Phoenix Park, sighing at the Wild Swans at Coole, (“Their hearts have not grown old,…..”) visiting Thoor Ballylee, climbing the winding stair, seeking the stare’s nest.  Later I attempted to pay my own tribute by directing Synge’s “The Playboy of the Western World,” but fear it was inadequate, especially when the second performance ran fifteen minutes shorter than the first – perhaps subconsciously trying to recreate it’s first ever staging, when it met with serious disapproval?

There was an atmosphere then, however, that has since passed away.  The Quays were dilapidated, with at least one shop window itself a chronicle of times past, and the General Post Office pillars bore the scars of the Easter Rising (as they still do in fact).  Street markets were untidy, scrappy affairs, and one pub I knew was illuminated by a single, bare light bulb dangling over the bar. 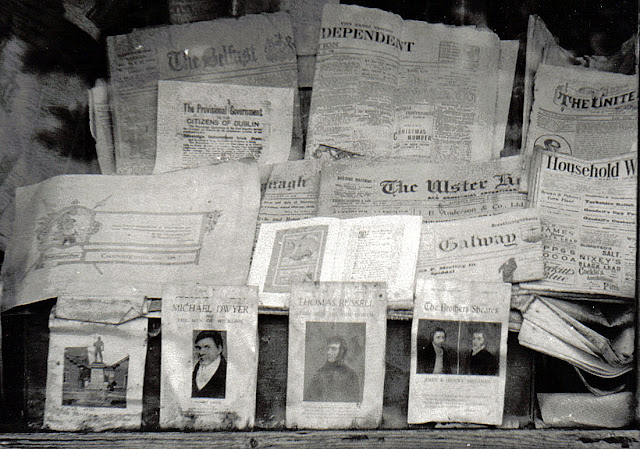 Somehow, however, in a tenuous but real way, I felt connected.  A friend (admittedly an old one) had once spent a night in jail with Maud Gonne MacBride, and also offered to introduce me to Micheál Mac Liammóir (I passed on that one).  Whether it was a coffee in Bewley’s or a glass of stout in Kehoe’s, there was a literacy in the dark air, with words spinning webs through the smoke. And through the city centre was the Liffey, the river of life, an Life, Anna Livia Plurabelle, inspiring bridges to carry the names of heroes.  And behind the Georgian façades, “that old triangle/Went jingle jangle/Along the banks of the .”

was famous for its exiles, and not just the old guard of Wilde, Shaw, Joyce and followers; it was a hard place to make headway.  The puritanical past was still there, and the church, and poverty, still ruled.  I was refused service in a lounge bar in because I was attempting to buy my friend Joanna a drink; it wasn’t because I was only sixteen, it was because women were not served.  On another day, Deirdre scandalised the neighbourhood for going to Mass in her bare feet.

Brian Friel, quoted in “A Paler Shade of Green” in 1972, said that he was, “uneasy about the future of the writer in .  is becoming a shabby imitation of a third-rate American state…..  We are rapidly losing our identity as a people and because of this that special quality an Irish writer should have will be lost.  A writer is the voice of his people and if the people are no longer individuals I cannot see that the writer will have much currency.”  I am sure that there will be plenty who do not take this view, but a change was certainly happening.

In 1966 Nelson’s pillar at the bottom of , was blown up.  Such was the pride in this that at least four pubs subsequently claimed to have Nelson’s head in their back parlour.  Also in the 1960s, Brendan Behan, Sean O’Casey, Patrick Kavanagh, and Flann O’Brien moved on. For them I quote from the archives of the Myles na gCopaleen Catechism of Cliché (“a unique compendium of all that is nauseating in contemporary writing”):
“And of what nature is their loss?
Well-nigh irreparable.” 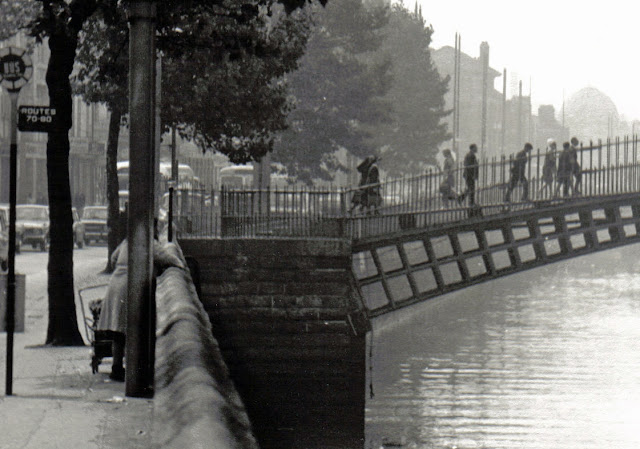 Oh dere.  Ah hoy!  The past begins to slip away again.  In Davy Byrnes, musing on opportunities lost, and found, I savour a ball of malt.  I am struck by two men at the bar, East Europeans perhaps, who by the tilt of their hats and the laces of their boots might be characteristic of the changes in society today.  They lean in silence; a long silence.  Then one of them says:
“That passed the time.”

And the other replies:  “It would have passed in any case.”

To which his friend responds: “Yes, but not so rapidly.”
Pause