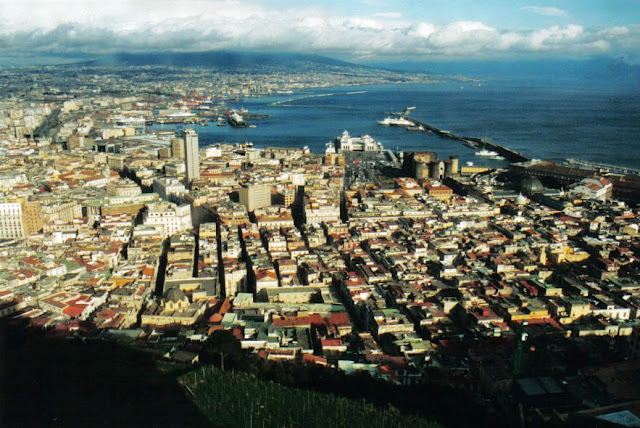 is an informal city.  No need to dress up.  No need to stand on ceremony.  Yes it has its glamour and glitz, but for the temporary visitor, there is no need to put on a show.  has all types, and takes all types, and all swirl together in a multicoloured melange.  In the great hall of the “Maschio Angioino”, as they call the Castel Nuovo, which dominates the centre and the port, the local government sits and conducts its business.  At the same time the door is open, guarded only by a couple of chain-smoking Vigili Urbani (local policemen), and anyone, from concerned citizens to crocodiles of schoolchildren can wander in and observe the proceedings.  In the gloom of the vast hall a disembodied voice drones over a PA system, while assorted councillors read the newspapers, or discuss football discreetly.  Outside visitors and officials, attendants and petitioners, children and adults all crowd indiscriminately, almost oblivious of the astonishing surroundings (originally built by the Angevin dynasty in the thirteenth century, and then renewed by the Aragonese kings in the fifteenth).  Beyond the walls, on one side is the bustling ferry port, from where an almost continual stream of people arrives from and departs for island destinations such as Ischia, Capri, Stromboli and , and on the other side rises the , with its eighteenth century Bourbon riches, adjoined by the San Carlo Opera House.  Few cities anywhere can boast such a range of spectacular architecture and history so casually close together. 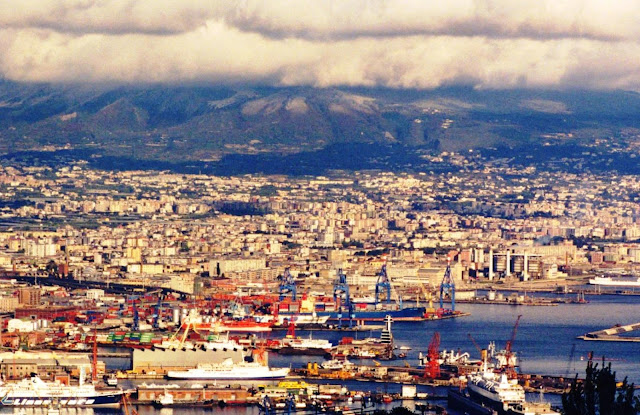 Thanks to the brooding presence of mainland ’s only active volcano (Vesuvius) no city anywhere can claim such a close connection with the past.  Vesuvius last blew red hot magma into the sky in 1944, as a kind of poetic commentary on the surrounding warfare, but in A.D. 79 it sealed the fates of both Pompeii and Herculaneum, the former by smothering it in cinders, the latter by engulfing it in hot mud.  Today they are among the most visited sites on the face of the earth, not without justification.  In you can wear yourself out pacing the rutted streets and examining the interiors of well-to-do villas (although of course you can now watch Mary Beard do it for you!)  From amphitheatre to bathhouse, from temple to marketplace, the city defies its age.  Despite the hordes of visitors, there are quiet corners and splendid views.  From certain angles the jagged crown of Vesuvius looms terrifyingly close; in other directions craggy and even snow-capped mountains appear; to the south the sparkling sea shines as footlights to the show. 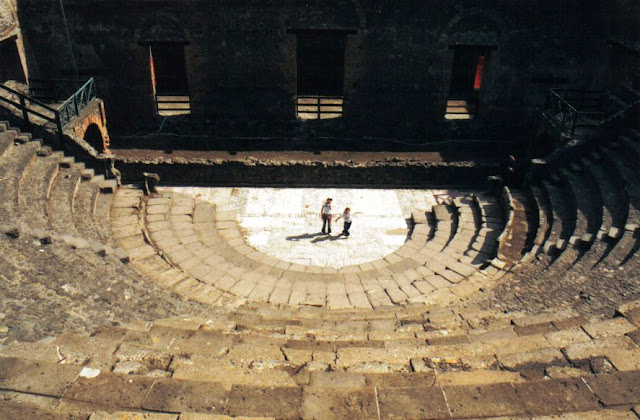 is altogether more concentrated, but here there are second floors to some of the buildings and the various bath complexes are almost intact, with amazing detail in the decoration.  The excavations have revealed wonderful remains of wooden screens and timbers, carbonised but recognizable, and wall paintings and mosaics, though not as opulent as at , are stunning in their colour and freshness.

There are many other visible traces of the Roman Empire in the area.  At there is a magnificent amphitheatre (the third largest in the ancient world); on there is Tiberius’s infamous villa (from which unfortunates had to leap to their deaths for his entertainment); and at Baia there are extensive ruins, some of which can be viewed under the sea from glass-bottomed boats.

Within the city, under other celebrated sights such as the Castel dell’Ovo, and the Churches of Santa Chiara and San Lorenzo Maggiore, intriguing remains of the ancient settlement of Neapolis can be found.  Also, for the more determined tourist, there are two access points to the fascinations of subterranean .  Forty metres under Piazza San Gaetano you can go back to the fourth century before Christ, and, at about the same depth under the elegant Bar Gambrinus on the edge of Piazza del Plebiscito, you can follow history from the sixteenth century through to the air raids of the Second World War.  Most of the tunnels and chambers formed part of the ancient water supply, but this was closed down during the cholera epidemic of 1884.  Between the two sites only a tiny sample of the more than two hundred miles of tunnels can be explored, but it is still an extraordinary aspect of this multi-faceted city.

﻿Apart from , which is still a place of pilgrimage for fans of Gracie Fields, and whose limestone cliffs and blue grotto are stunning to visit, the volcanic islands of Procida and her big brother Ischia are easy to reach from the Molo Beverello, right in front of the Castel Nuovo.  Procida has been in the movies recently, with all of the delightful “Il Postino” and a part of “The Talented Mr Ripley” being shot here.  It is densely populated, but also intensely fertile, and every inch of soil produces lemons, oranges, grapefruit, artichokes, beans or flowers.  Ischia, a larger and more varied island, was home for many years to William Walton (who for some reason preferred it to ).  Here you may need to speak German, but you will find mud baths and steaming sulphurous water to soothe your sore feet after tramping about the cultural sites, as well as pretty beaches and green hills. 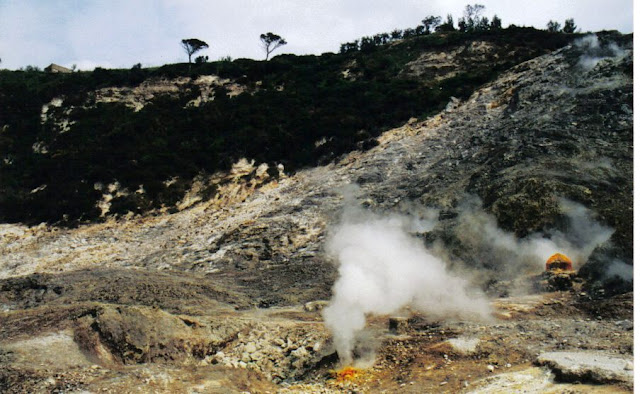 One other place in the vicinity of is worth seeing if you have time.  This is the Solfatara, just above .  Leaving behind the scruffy modern development and the busy road, you enter a volcanic crater, and can wander amongst mediterranean macchia, and across what seems to be a sandy floor.  All around, however, there are little traces of sulphurous steam, and, in some parts, boiling pools of grey mud.  The rocks on the crater sides are stained yellow, and in some areas the clouds of steam are so thick and hot that you will find yourself sweating, even on a chilly day.  It’s a place that fascinates, and, if you want to prolong your visit, there is even a peaceful campsite, and it must be an eerie experience to wander amongst the devilish fumaroles at night.

Public transport in is something of a nightmare, but it is improving.  You can get tickets (which can be for 90 or more minutes or for the whole day) for all the buses, trains, trams, funiculars and metros at tobacconists, newsstands and metro stations and, if you are brave, you can get almost anywhere reasonably quickly.  Traffic can be alarmingly dense, but most of the public forms will get you there, although don’t be alarmed if the entire tram network breaks down – it won’t be for long!  And things are improving!  Not many years ago the then President of the (Ciampi) inaugurated a brand new metro station in Piazza Dante.  A huge window dressing operation took place for the official visit, with specially laid turf and new palm trees; TV and press coverage to the hilt.  And the length of new metro line?  600 metres!  But in the not too distant future, it will be possible to criss-cross the city underground and to step almost straight from the metro onto an Aliscafo (literally a winged boat – better known as a hydrofoil) to Capri or .

When in the centre of the city, however, the very best way to appreciate the flavour and the life of the place is on foot.  Hang on tight to your bags, clutch your purses and wallets close to you, but stroll up and down the narrow Spaccanapoli, once the decumanus inferior of the ancient city grid plan, or the Via dei Tribunali, the decumanus maior.  Both these narrow streets split the city from side to side, and are lined with churches, bars, crowded botteghe, selling everything from multi-coloured pasta shapes to live octopi, and surprising little squares where children play football against church doors.  They are dark, mysterious, noisy, scary, lively, bustling and dirty, but you’ll never be bored, or hungry, and you’ll find that all human life is there, in all its informality.  When your spirits start to flag, try a fresh glass of lemon juice with bicarbonate of soda – an astonishing pick-you-up.  When you are tired of polishing the basalt paving stones with your walking, sit down for a pizza straight from the wood oven of Matteo or Michele.  If you want a little peace for a moment, drop into the beautiful tiled cloister of Santa Chiara, and wander amongst the quiet majolica pillars, the box hedges and the orange trees.  If you want a little macabre thrill, descend into the crypt of the Cappella Sansevero (though not before you have admired the fantastically life-like veiled Christ), where you will find two of the oddest exhibits of anatomical research ever housed in a church, relics of a certain 18th century Count’s alchemical experiments.  Not for the squeamish!


For the serious sightseer, the art lover, the dedicated tourist, there are, of course, major sights within the city as well.  These are described in all the guidebooks.  It is now possible to get a pass that gives you entrance to six major museums, as well as permitting you to use all public transport, for 60 hours.  The places to see are the Archaeological Museum, which houses many of the finest Roman mosaics from Pompeii as well as some of the most famous classical statues in the world; the Capodimonte Art Gallery, with works by Raphael, Titian, Botticelli, Correggio, Caravaggio and Bellini, as well as El Greco and Breughel.  On the Vomero hill, next to the impressively restored Castel Sant’Elmo is the Certosa di San Martino, which is itself a beautiful building with spectacular views over the whole area, but which also houses a fine art gallery.  Then, in the centre of town there is the turreted Maschio Angioino (Castel Nuovo – as mentioned above), the Royal Palace and, perhaps finally, as it is perhaps the original place of habitation in Naples (and it’s free), the Castel dell’Ovo, which rises in massive form on an islet in the centre of the bay, supposedly built over an egg (hence the name) that Virgil buried here.  And then, when you have tired of all this art and history, you can settle down at a table in one of the restaurants by the waterside (Zi Teresa or Ciro being two of the best) and enjoy the very best of Naples – good food, excellent wine (try Falaghina) and the play of sun on water.  And you don’t need a jacket!

My relationship with Naples goes back well over thirty years, and, although there are have been many changes, not the least of which is the fall in importance of the port, leading to increased unemployment and a related increase in crime, the city remains rewarding and strongly alluring.  I have encountered warmth and help from the inhabitants and continue to enjoy the confusion and vitality.  It has its third world aspects, and it may not suit those who prefer their boulevards manicured, but on my last visit I took my two young daughters, and they had a great time.  Although the local habit of not opening osterie or trattorie (the cheaper eating places) until after the shops shut at eight p.m. took a little getting used to, it provided endless diversion and stimulus for the family.  The only problem was, I didn’t take a jacket, and our trip coincided with some decidedly unseasonal weather, during which we chased snowflakes on the Vomero and were treated to the unusual sight of snow on the flanks of Vesuvius.  I wished I hadn’t been quite so informal!

When it was time for us to depart, our flight was an early one, so we had to leave early in the chilly morning.  As a remarkable contrast to the bustle of the working city, the streets were nearly empty.  Vesuvius was rising in the dawn.  The sea was gleaming like dark mercury.  The taxi took ten minutes from Piazza Bellini to the airport.  Red lights all the way.  And we didn’t stop once.