A voice near my foot said: "Got a cigarette?" I drew quickly back and trod on an arm.  In the gathering February dusk, combined with the haze that had been building all day, I had not seen anyone behind us as we climbed the Fisherman’s Bastion. 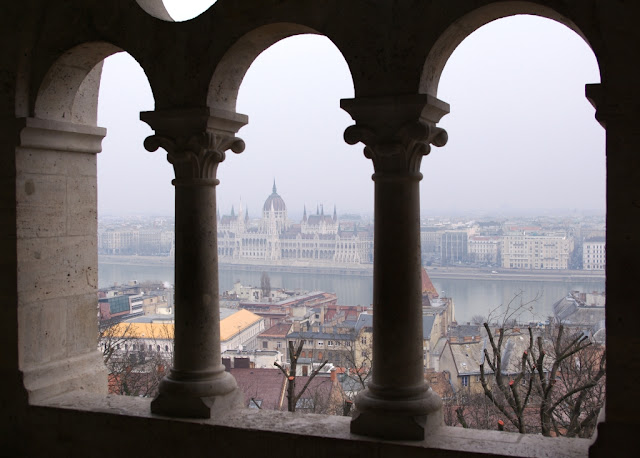 "No." I said weakly: "I don’t smoke," and imagined I could feel enmity fuming up all round me. But my daughter came to the rescue.  “Here,” and she produced two slightly creased cigarettes from her pocket.  We descended the steps and stood facing a man about my age, but thinner and wrapped in an old grey coat.  His head was crowned with a brown trilby, and his eyes glimmered like dying embers, his moustache like a brush beside the grate.

He took the cigarettes and beckoned.  We followed him back into the gothic arcade overlooking the .  “Would you like a leaflet?  ‘Panorama’ – for charitable people.” He lit one of the cigarettes.  Behind him the parliament building faded across the river.  We gratefully accepted a beautifully produced four page A4 leaflet, in English, with a colour picture on the cover of someone driving a single engine seaplane under the Chain Bridge.

The drive in from Franz Liszt airport introduces (or at least the part of the city) as modern roads funnel into faded boulevards, into straightened roadways and eventually into narrow and congested streets.  On the way, construction sites by broken farms give way to reconstruction sites and run down apartment blocks.  All this passes in black and white, a grainy print, with perhaps a glimpse of someone turning a corner away from you.  Did he have blonde hair?  Horn-rimmed glasses?  Was that Orson Welles in the shadows?  The faded plaster fronts of older buildings are pock marked, scarred and scored by shrapnel and bullets; the concrete of the new is everlastingly grey and already dusty from the traffic.  Since Soviet troops left in 1991, the city has entered a new phase of development, but it’s a long way to the future. 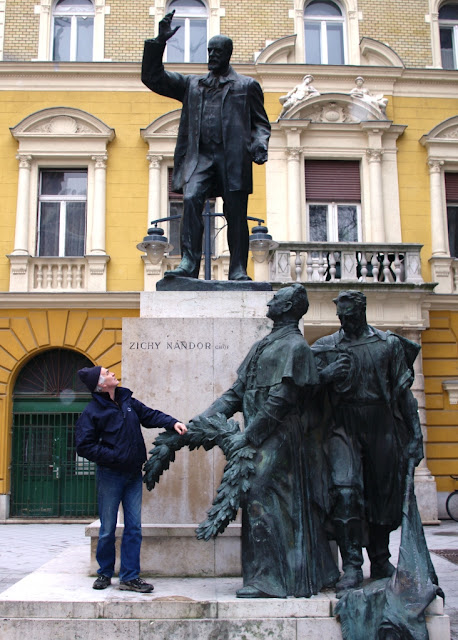 However, our hotel, guarded by (and named after, since it was his home once) the statue of a pre-communist hero, Nandor Zichy 1829 - 1911, is bright and warm and welcoming.  The young staff speak impeccable English (not only a vital necessity in a country where the language isn’t Indo-European in origin - it is from the Finno-Ugric family - but also one in the eye for most hotel receptionists in the !) and the redesign of the palazzo is stunning.  Free PCs with wi-fi deck a mezzanine, the central shaft of the building now has a glazed roof, so the breakfast area is airily lit but warm.  Our room is immaculately clean and comfortable – it’s almost a shame to go out!

But I cannot resist a wander, and soon find myself gazing downstream along the mighty , a river that seems neither blue nor waltz-like.  It appears viscous, and the boat that is working its way towards me struggles against the syrupy slush that swirls below the iron bridge. 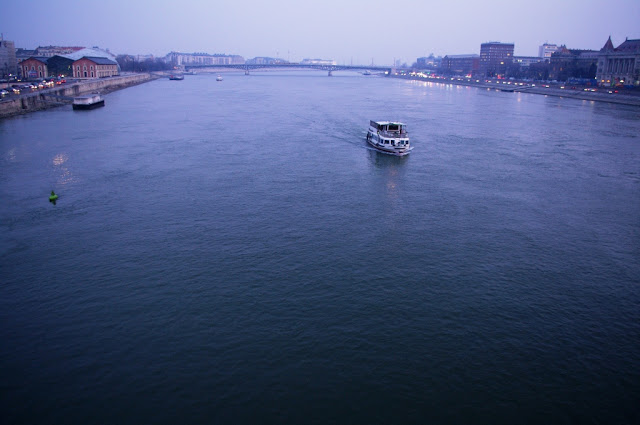 It is cold.  Everyone is wrapped in bear skins and crowned with beaver hats.  Faces peek out from layers of wrapping; extremities are covered by flaps and mitts and boots.  I take refuge in the fug of the Bar Zappa, named after one of the few Hungarians to have achieved fame in the Western World (OK he was born in , but his roots were Hungarian!)  [Actually, there are many famous Hungarians, from Laszlo Moholy-Nagy to Johnny Weismuller, through Bela Bartok, Harry Houdini, Zsa Zsa Gabor, to Cicciolina, well known Italian Politician, not forgetting  László Bíró (the biro), and Ernő Rubik (the Rubik cube)]  Anyway, I am grateful for the beery comfort of the Bar Zappa, whatever the propriety of its name.  The atmosphere is , 1968, and I half expect to see crushed velvet and ban the bomb badges.

Our stay in is short.  It’s a grand, sprawling city, cut in two (Buda and Pest and not really united until 1873) by the mighty river, and by reputation and culture the point where East meets West.  There is something very different here from other, similar, European cities.  struts its elegance, and is much closer to ; has its bohemian splendour and is so much more Germanic.  Although took form as a spa town for Imperial Rome, after the fall of the Empire it was occupied by Magyar peoples from the Eurasian steppes, and since then it has been ruled by the Mongols and the Turks, as well as the Habsburgs.  From the disaster of the First World War, to the 1990s, Hungary was tossed between fascism and communism, with the brief glory of the 1956 uprising, inspired by Imre Nagy and his ‘new course’ being crushed by the might of the Kremlin (while the UN were distracted by Suez).  I guess it is fair to say that nowhere is absolutely secure in this day and age, but perhaps it is significant that Hungary still has its own currency in the Hungarian Forint (HUF) although it is in the European Union and the Euro is widely accepted.  As with the slight sense of schizophrenia created by the Danube, is still hedging its bets.

The city has palaces, churches, museums a plenty - the Hungarian National Gallery in the Buda Palace on Varhegy (the Castle Hill) is one not to miss, though neither are the House of Terror, a dramatic memorial-museum to victims of oppression, housed in the former secret police (both the fascist Arrow Cross, and the communist AVO) headquarters and the Holocaust Memorial Centre.

But if you want a diversion that is less taxing mentally, you cannot visit without taking your clothes off!  The Romans favoured because they could bathe here, and the waters haven’t changed.  Whether it is the austere elegance of the Gellert baths, in the 1918 Hotel of the same name, where you can immerse yourself in steaming mosaic pools or swim alongside open air palm trees, or the slightly more relaxed (no gender divisions here) open air pools of the nineteenth century Szechenyi Baths, where my daughter and I wallowed in the 37º waters watching elders playing chess while it snowed.  There are dozens of thermal and medicinal pools here as well, housed in a rough copy of the Brighton Pavilion, with scalding saunas and choking steam rooms as well.  What makes this location even better is that you need to take the repristinated Metro Line One to get to it and then you can wander in the Vidam (or “English”) Park after to get your breath back. 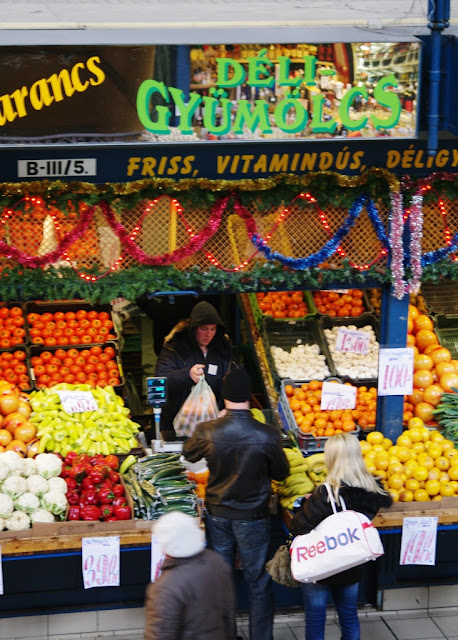 One other experience I would recommend is to spend a little time in the Great Market Hall (Nagycsarnok) which is a vast iron structure a bit like St Pancras, with stalls and cafés on three levels.  The top level being where you can eat and drink and buy any amount of souvenir kitsch; the main floor being dominated by foods of all kinds, from paprika by the tonne, to chicken feet by the truck load (and in case you never thought of it before, where do you suppose the feet of all those neatly packaged supermarket birds end up?  But don’t ask about the beaks…..)   The subterranean level is for fish, but not always quite what you might expect.  In some tanks, super sized carp cannot even turn around.  The mind boggles.  How can they even get them out to sell them?  But what would they taste like, cramped into a coffin like tank of stale water?  Where is Greenpeace when you need it? 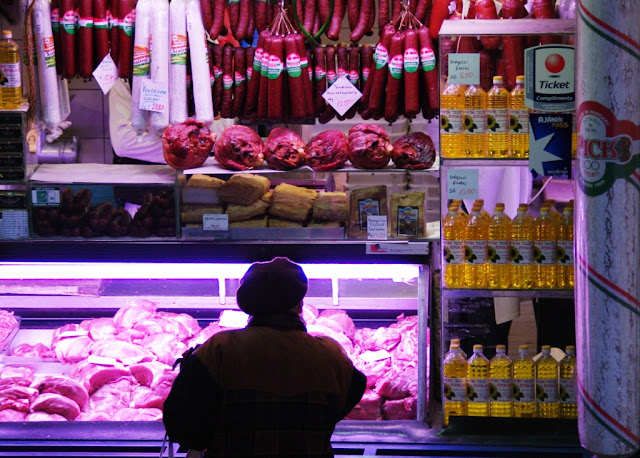 Notwithstanding, we eat well.  Whatever the indigenes cook up at home, restaurant food is hot and substantial, and, providing it is washed down with a good Tokaj (a treat by any measure) it’s just what you need to keep the cold out.  Goulash soup, stuffed cabbage, Tokaj.  And then a coffee and some more Tokaj……

We chanced upon a very fine restaurant for our last evening meal.  An open gateway led into the garden courtyard of a renaissance palace.  Then steps led down to the basement, where tables were arranged in the rooms around a central bar.  The walls were decorated with the modern mosaics portraying the virtues of true socialism, but the place had apparently been the hideaway of a group of architects who feared that the communists might not have appreciated their intellectual ideas.

We eat goulash.  With Tokaj.  At the next table, a group of architects discuss technical drawings.  Drinking Tokaj.
And afterwards.  We walk up across the river to the heights of the Varhegy, to say goodbye to the city and, if possible, to say goodbye to our hospitable guide.  But the Fisherman’s Bastion is empty, its neo-gothic splendour reflected in the copper sheen of the brutalist modern Hilton.  In the cold the tang of urine and hint of tobacco in the air remind me of air-raid shelters, and bus stations.  But no one is there.  The view of the parliament building all but obscured now in the bitter night, the lights of a boat crawling up the viscous river, the Chain Bridge alive with traffic; but no one but us on the Bastion.  We leave a parting gift.  The remains of my daughter’s packet of cigarettes, a 1,000 HUF note rolled inside.

Note:  This article was written for the Graham Greene International Festival 2012, hence the quotation from Graham Greene that is the starting point.