Another side of Islay
﻿
﻿

If you live in the Waitrose Counties then please take a seat and close your eyes before reading the next sentence.  There is no ricotta on .....  There is mascarpone and mozzarella, but no ricotta.  Despite all the sheep.  I have trawled the half dozen or so shops on the island, scattered strategically through the half dozen communes, and could have purchased Brasso, or Green Treacle, but not ricotta, which I sought for a simple vegetarian pasta dish.﻿﻿﻿﻿﻿
﻿
﻿

So what does this shard of Hebridean rock have to offer?﻿﻿ 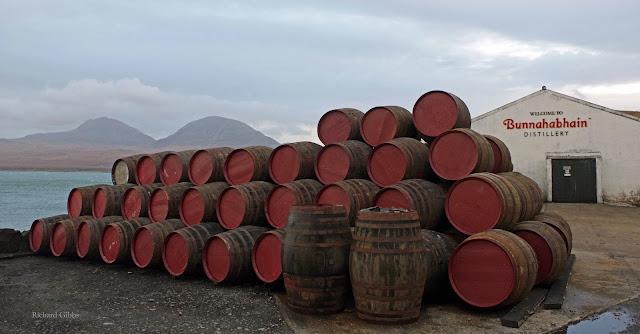 At least that is part of the answer. There are eight active distilleries on the island, and the business is the second biggest employer (after agriculture). It is a traditional industry, and until Oliver Cromwell introduced excise duty in 1643, was one that probably everyone practised. There have been serious dips in productivity over the centuries, World War I and the 1980s being especially grim periods (in different ways of course - I can't think that Mrs Thatcher or Duran Duran made things easier).
﻿
﻿
﻿
﻿
Things are on the up, nowadays, however, and demand is high, with prices spiralling (unrelated to the fact that tax on spirits in the UK is approximately £9.50 a bottle). For example, there are, at the time of writing, only two bottles of Port Ellen Feis Ile 2008 Single Cask available on Amazon and they are priced at £5,197.50p each.
﻿


I happen on the Lagavulin Distillery.  A brisk south-westerly is lashing the coast and thrumming the roof as I am welcomed by a giggling Eastern European girl (I travel, get job, meet man, you know....), then I am given a personal tour by Charlotte, who has skin like white chocolate and hair like liquorice.  She was, I imagine, born in a Mash Tun and brought up by her grandfather, who worked for the company for at least a hundred and fifty years.  As we tour the complex I am swathed in airs of peat and malted barley, yeast and oak and water and smoke (as well as chocolate).  The distillation process is continuous, twenty-four-seven, except for a shut down for a fortnight in the summer for essential maintenance, and there are about 25 parts per million peat to the air I breathe.  Liquid yeast is tankered in from the mainland, the malt (from imported barley) is produced under controlled conditions in the redundant Port Ellen distillery (also owned by Diageo, but producing the malt for most Islay distilleries); the freshly distilled spirit is then matured in oak casks (the majority of which are imported, flat-packed, from Tennessee) inhaling the sea air for sixteen years before being shipped to the mainland for bottling.

I taste the wash, from one of the ten larch washbacks, fermented for 55 hours, reaching around 8.9% abv, and learn about speed of distillation, the slopes of the Lyne Arm, the strength of the low wine, the percentage abv of the spirit cut, and that Lagavulin has a 12,900 litre spirit still capacity with a 30 minute foreshot run.  It is a fantasy world, with the roof rattling in the wind, the steams and fumes of the processes, and with 's chocolate face gradually melting with the heat from the coils under the 6.89 metre pear shaped copper stills.  I learn that it is a craft, not a science:  after all, the primary difference between brands here is the water source, but then I think, what do you get if you distil water?  Answer: distilled water...... even though the classic malts website has this to say:  Above all, means peat. Miles and miles of peat bog in the west of the island provide the raw material whose influence so characterises the south eastern malts, of which Lagavulin™ is perhaps best known. Lagavulin’s™ rich peaty water runs down the brown burn to the distillery from the Solan Lochs in the hills above the distillery......
﻿

At the end of my tour, having been advised that I may not take photographs (for H & S reasons) I am presented with an engraved glass (to keep) and a bottle of their flagship 16 year old Uisge Beathe (to taste) and allowed to relax in a leather upholstered chair in the old malt store - giving me time to dash off a watercolour of these most pleasing and atmospheric surroundings, while the storm blathers on outside the window. 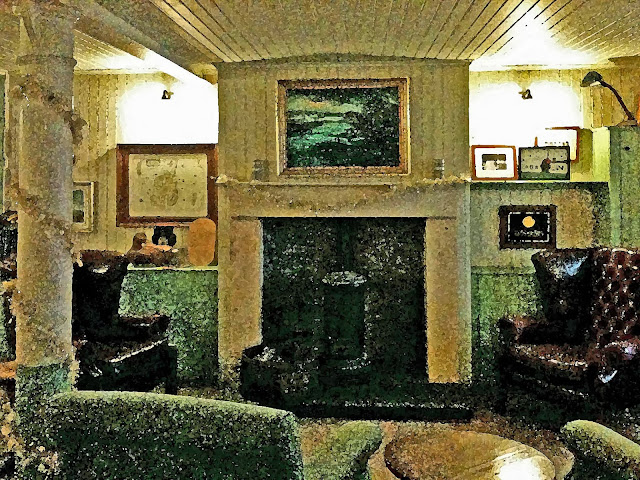 Another offering that makes to the world is in life forms.....  The island is home to some 3,228 persons, though the number is declining (and most of the souls I met hailed from elsewhere....)  [These figures of course do not include the 55,000 or so visitors every summer, many of whom stay in restored cottages.]  Once upon a time (in 1831 for example) the population of this island was 14,992, but with some persuasion, and perhaps a relatively lax Canadian immigration policy, many set sail for the eastern shores of Lake Huron, though some sought work on the Clyde.  Their cottages, and their churches, stand roofless, gently slipping back into the ground from which they were raised.  In recent times, too, with development in agricultural practices, other changes have come about.  In 1946 there were 8,707 cattle in 475 holdings on the island looked after by 521 labourers (with 670 working horses).  In 1976 these figures were 17,097 cattle on 109 holdings with a labour force of 115.


Times change.  Once upon a time we all ate peat, and only had roast narwhale or boiled mammoth for Christmas.  Nowadays folk seem to need deep frozen yoghurt and steamed Hobbits to feel satisfied.

﻿
But there is a resilience in the people of , and there is a sense of community in isolation.  The geese, principally Greenland Barnacle, 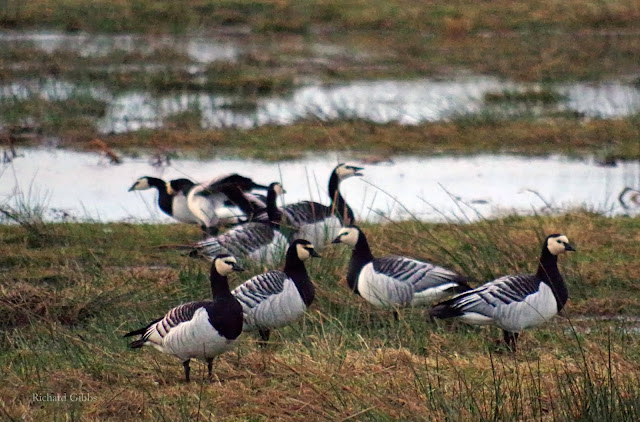 but also White-fronted, provide the metaphor, in a sense.  They gaggle and flock, in tens of thousands, but in each flight there is a flapping and a striving to keep up and be a part of life.
﻿

﻿
Then there comes a time when the strength is not there, and a lone goose will swim, lopsidedly, to join a few Teal in the shiny shallows. 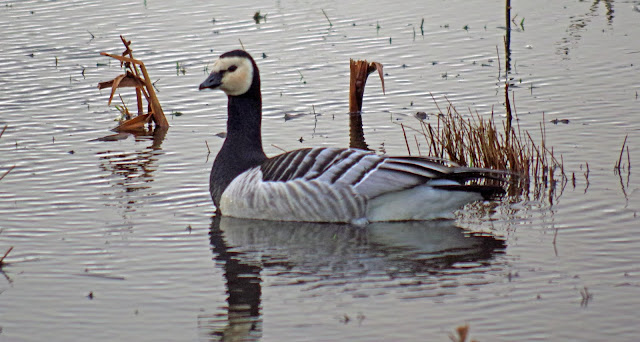 In the meantime otters preen themselves on seaweed-soft rocks, heron stand immobile in the shallows and seal lie like discarded whisky barrels in the waves, their blank eyes seeing but not seeing; being and not being.
﻿

Deer (red, roe and fallow) strut their stuff, banging antlers (if they have them) across the moorlands and in the woods; feral goats scurry up steep hillsides, and graze on rocky ledges; sheep dot about like maggots on the carcass of the land, then flurry down when nudged by quad-bikes and dogs.  Various hardy crossbreeds of cattle wander the slopes and dunes, their hair getting in their eyes.

Above us only sky, and then only birds, and then a single silhouette as bits of all shapes and colours defy us with their flights.

I see an eagle beating huge bronze wings to create lift, then a crow flips past in a crazy display of somersaults.  A flock of twite swarm past me, defiant in their numbers, and then across the loch a firework shower of Golden Plover will cascade onto the mudflats where oystercatchers probe and bar-tailed godwits sift.
﻿
﻿
﻿

﻿
﻿
In spring corncrake return from to breed, and, with careful management of pasture, their numbers are increasing.  Throughout the year chough may be seen on beaches and around farms, though this attractive species is struggling to survive.  For all these and more (there are over 100 species of birds to be seen on Islay) the RSPB has been on the island since 1984, and now farms extensively in the Loch Gruinart area and on the Oa. 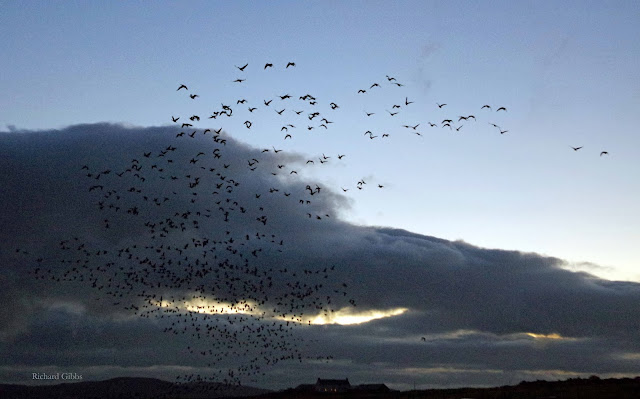 At any time of year the land-, sea- and sky- scapes are to be marvelled at.   In 1792 the Islay landscape was described as heathland absolutely in a state of nature.  Nowadays the Hebrides are ranked as the fifth most exposed inhabited region of the world. 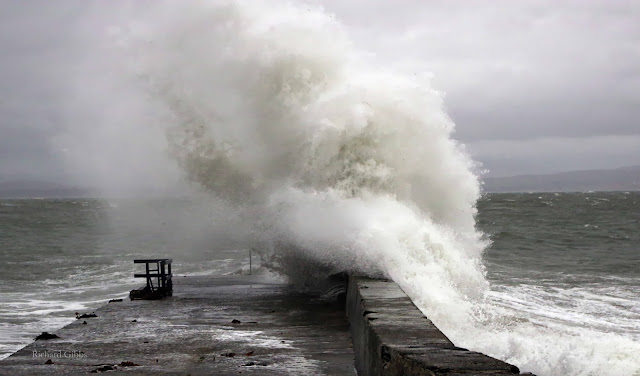 Whether in the dark of night when the Milky Way wraps you in its spectacular embrace, or in the fierce pitch of gales when the sea is whipped to spume and sand stings your ankles, 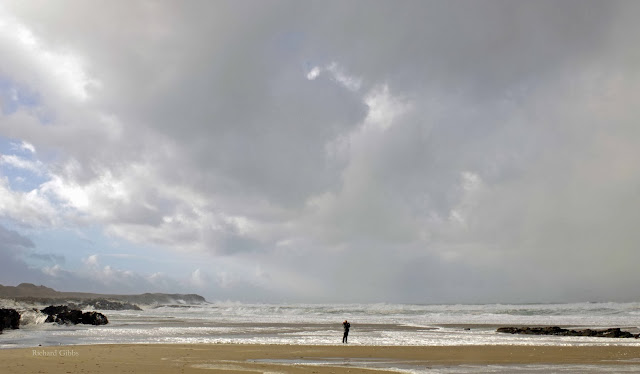 or at slow cloudy sunrise when the geese bark off to feed,

or at ragged wild sundown when tired birds flap slowly back to their roosts, 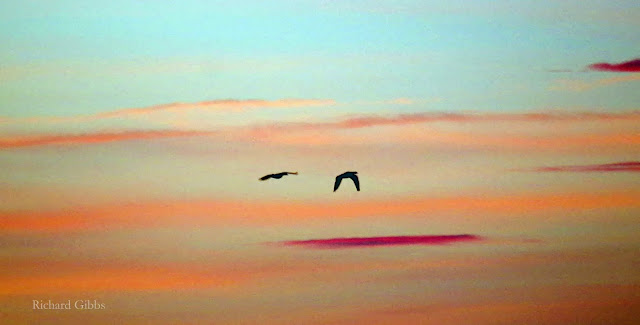 the island is primevally open and varied.  And punctuating the hills and lochs lie remains of human habitation or worship, 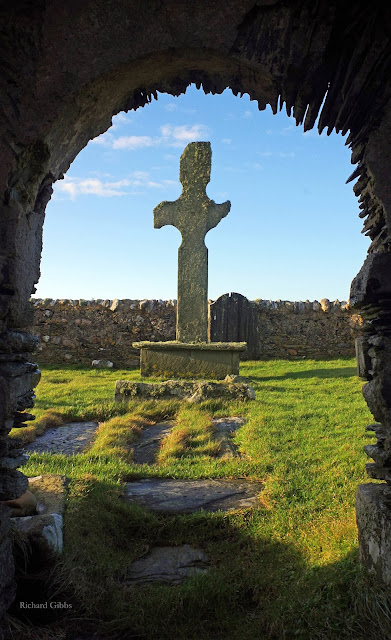 with great carved crosses and standing stones as the gems in a litter of interest.

My recent stay in December had all the above, and rain, and soggy bogs, and flooding burns thick with peat, and winds that cancelled planes and diverted ferries.

﻿
In other seasons there would be flowers, and greener grass, and delicate shade in the deciduous woods, thick with moss and lichen. 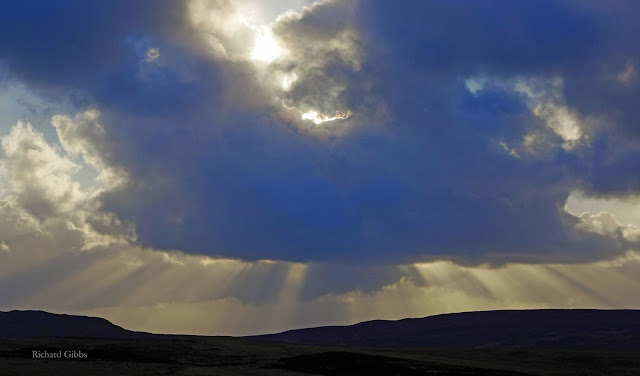 As the winter changes too there might be frozen waters and snow in drifts, but this is not the highlands, and the climate is tempered by the North Atlantic Drift and south-westerly winds.

It certainly isn't , or the 36,040 Barnacle Geese that are overwintering here this autumn would go further south.


Islay is the most southerly of the , and is approximately 15 miles wide by 25 miles long, though it is almost cut in two by two sea lochs that once did meet.  It has an area of 237 square miles and is the fifth largest Scottish island, with a population of 3,228 at the last census giving it an average population density of 5.2 people per square kilometre (which compares favourably, for example, with 's 3,298 per km²).  Its highest point is Benn Bheigeir at 491 metres, a mere third the height of

Whisky Galore is the title of a book by Compton Mackenzie, which was based on real life events on Eriskay that happened in 1941.  In 1949 a film was made of it (on Barra) which is now revived from time to time as a classic Ealing Comedy.  Its concerns with shipwreck, whisky and the life of a community are not exactly irrelevant, though an attempt at a remake in recent years came to nothing.
﻿


﻿
﻿
With images of a truck heavily laden with crates of whisky jolting over sand-dunes and racing along a beach at night in my head, I crave a dram of the water of life, stiff with peat smoke and salty oak. 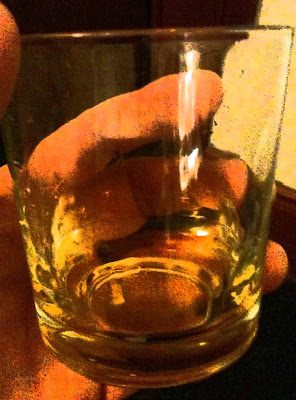 In my head I confuse the film with Once Upon a Time in the West and imagine a crane shot swooping up above Lagavulin distillery to reveal a stone built farm set by a windswept beach. 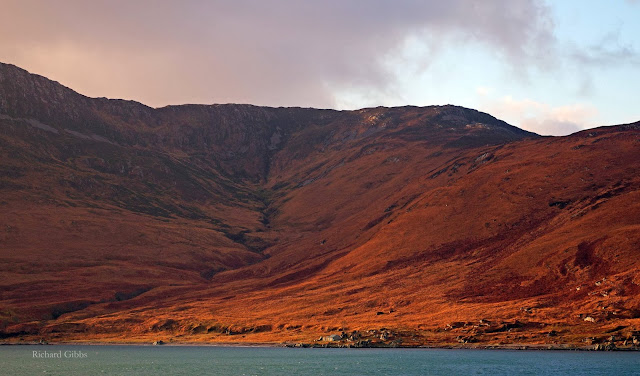 As the sound of geese calling to each other in flight beats past the light dies
﻿
﻿
﻿
﻿
and all that can be seen is the glow of firelight and candles through a window.  The swirling music of Ennio Morricone's theme plays.
﻿ 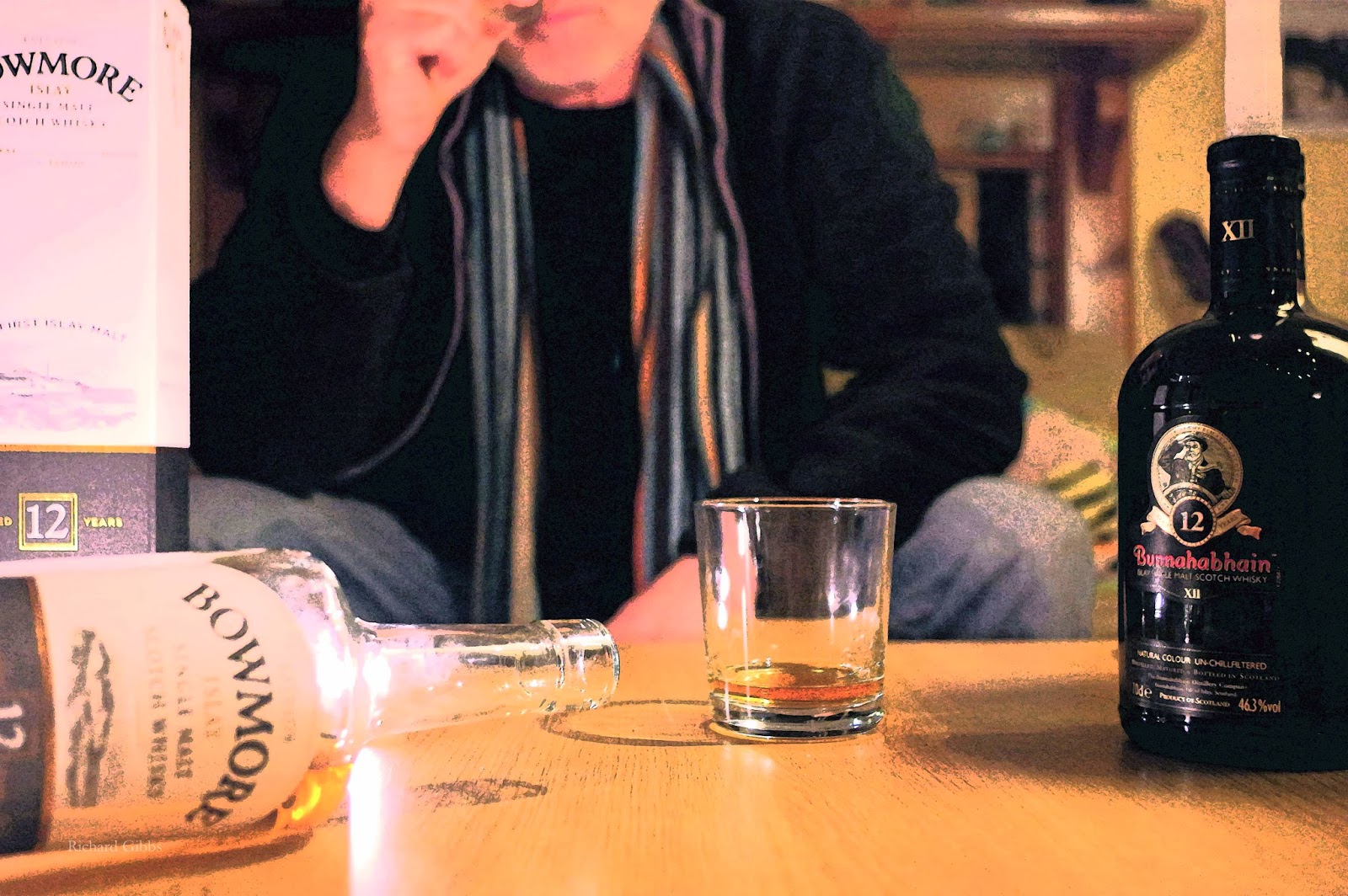 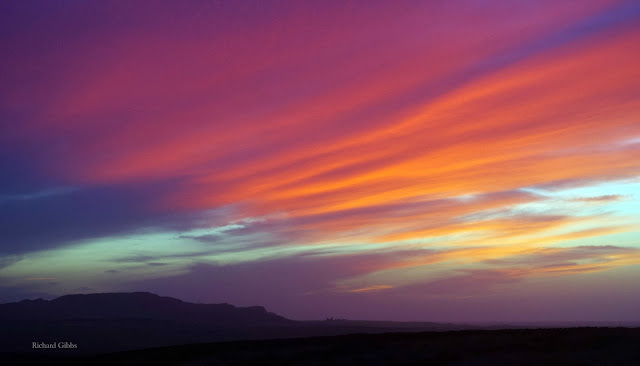