Elizabeth David would have been 100 on Boxing Day 2013.  Her story has been well rehearsed: she came from a well-to-do family (her father was a conservative MP) but she did not have a happy childhood.  She was sent to the Sorbonne to study art history, but returned to London to become an actress.  She then left England and spent the war years around the Mediterranean (having been imprisoned in Italy as a spy) in the company of such Bohemians as Lawrence Durrell and Alan Moorhead.  She married a British Officer in Cairo and went with him to India, but it didn't last.  She returned to London and began her writing career, becoming famous and influential, mixing with the likes of Terence Conran and Francis Bacon, and opening a shop in Pimlico, near her home in Chelsea.  In 1963 she suffered a stroke and lost her sense of taste.  Her later years were troubled, and she had a serious car crash in 1977, from which she struggled to recover, though she remained revered, and loved, until her death in 1992.   At her funeral, among the wreaths and baskets of flowers, and the violets she loved, someone left a loaf of bread and a bunch of herbs tied up in brown paper 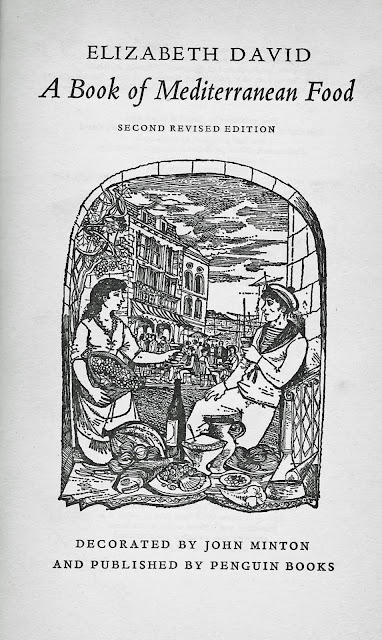 Her first book was A Book of Mediterranean Food, published in 1950.  In her introduction she wrote that, With this selection.... I hope to give some idea of the lovely cookery of those regions to people who do not already know them, and to stir the memories of those who have eaten this food on its native shores, and who would like sometimes to bring a flavour of those blessed lands of sun and sea and love trees into their English kitchens.  It was not the first time that anyone had dared to suggest alternatives to toad-ion-the-hole etc, and it was a genuine attempt to communicate the pleasure she had discovered for herself. 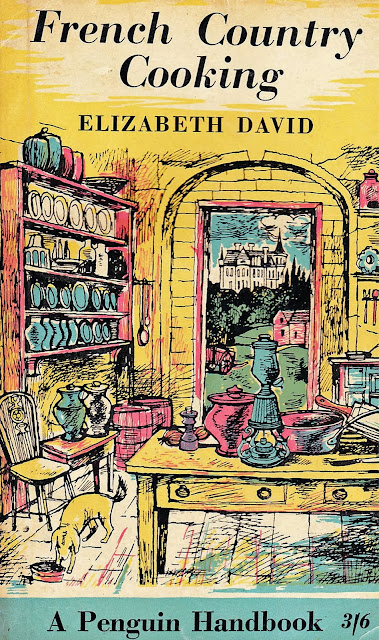 Her second book came out in 1951, and in her original introduction she commented that, Rationing, the disappearance of servants, and the bad and expensive meals served in restaurants, had led English people to take a far greater interest in food than was formerly considered polite.....  And she directs her book at those who take trouble over their preparation of food.  For those who can remember post-war rationing, and institutional food in the fifties, the sunshine and inspiration brought by her books was delightful.   But it was not an inspiration that took me abroad, and this is where I strongly disagree with Tim Hayward, a chef and food writer who has publicly lambasted Elizabeth David in The Guardian and just the other day again on The Food Programme on BBC Radio 4.

Elizabeth David did not cause the middle class food revolution, nor did she encourage the English middle classes to buy up farmhouses in France, Spain and Italy.....  There is a certain chicken and egg conundrum here, I will admit, but I submit that, as with other publishing successes, the market was ready for her.  She did celebrate some wonderful ideas from Europe and the Middle East, but her main virtue was that she inspired others to be creative and to take care with their cookery.  I know.  I was one.  And, Mr Hayward, it is true that in Lancaster in 1970, when I began to cook for myself and for others, olive oil was only available in Boots in small bottles for medicinal purposes - it may have been running in the streets of Soho, but it was not something to be found in Lancaster Central Covered Market, where I daily shopped for the most wonderful local ingredients, like Lune valley lamb, and Lancashire cheese, Megrim sole, baby turnips, and cox's orange pippins, which I then took back to my flat to use as ingredients for recipes from the books of Elizabeth David, which perhaps from time to time I adapted.
My personal cookery development began in County College, at the University of Lancaster, where, put off by the institutional fare on offer in canteens on campus, I began to self cater in the communal kitchens, with my mother's Good Housekeeping Cook Book.  A girl friend tutored me in a one-dish concoction of onion, minced beef, sweet corn, and Oxo cube.  Then my friend Ray Steele, from Crewe, went to the South of France in a Citroen 2CV with his girlfriend and came back with garlic, raving about this wonderful new ingredient, which I had never before seen, smelled or tasted.  Then, armed with a 1923 edition of Mrs Beeton's Household Management that I bought from a junk shop for £1, I was off.  Soon I was cooking every day, and in May 1971 Mary gave me Elizabeth David's Spices, Salt and Aromatics in the English Kitchen, which includes recipes for Gooseberry Sauce for Baked Mackerel, Boiled Salt Pork, Smoked Goose and Apple Grasmere.  The author of this book was not the Europhilic snob you would have her, Mr Hayward, [and, by the way, Mrs Beeton has this to say of olive oil: much of the oil sold as olive is adulterated with cotton-seed oil, which is far cheaper than any fat used as food - her recipes are hardly full of it.] 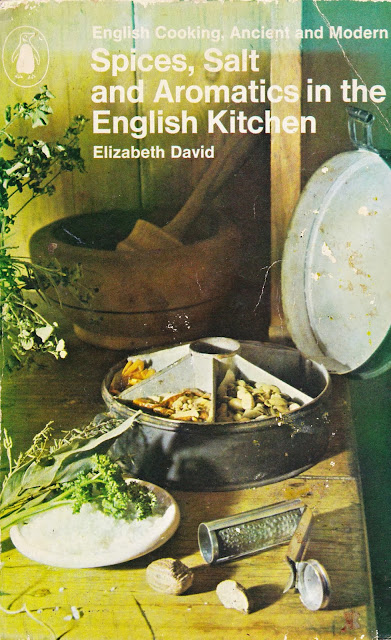 In her introduction to the above book, Elizabeth David wonders if she would ever have learned to cook at all if she had been given a routine Mrs Beeton to learn from instead of the romantic Mrs Leyel.  Hilda Leyel, who died in 1957, was the founder of  the Culpeper House herb shops, but also co-author (with Dorothy Hartley) of The Gentle Art of Cookery, among other books.  And it was this book which inspired the young Elizabeth David.  Stimulus.  That was the quality which Mrs Leyel's book provided, and in plenty.....  And this was the quality which Elizabeth inherited and passed on.  The mantel is now on other shoulders, and whether you prefer the gentle prose of Nigel Slater, the incessant prattle of Jamie Oliver, the infectious bonhomie of Hugh Fearnley-Whittingstall, or the oils and powders of Nigella Lawson, things have changed, as things have a wont to do, and in all probability the works of Elizabeth David will become rarities on the shelves of the next generation of cooks.

But the best of Elizabeth David (née Gwynne) was her attentive, knowledgeable appreciation of food and cooking, as expressed in her writings.  As Alan Davison wrote, in The Oxford Companion to Food, she was the food writer to whom is given by common consent most credit for leading British tastes.... in a new direction.  To return to my title, Somewhere, over the Rayburn, ED was perhaps Glinda, the Good Witch of the North, and her contemporary, the execrable Fanny Cradock (née Phyllis Primrose-Pechey) was the Wicked Witch of the West.  In the Technicolor land of Oz we all learned of marvels along the yellow brick road, and although we made it back to Kansas, we will not forget our experiences over the Rayburn.  Elizabeth David was charming and unpretentious, literate and inspirational, unlike many more showy personalities.....

Her books and articles persuaded her readers that food was one of life's great pleasures, and that cooking should not be a drudgery but an exciting and creative act. In doing so she inspired a whole generation not only to cook, but to think about food in an entirely different way.