London 9 - From Kew to Putney 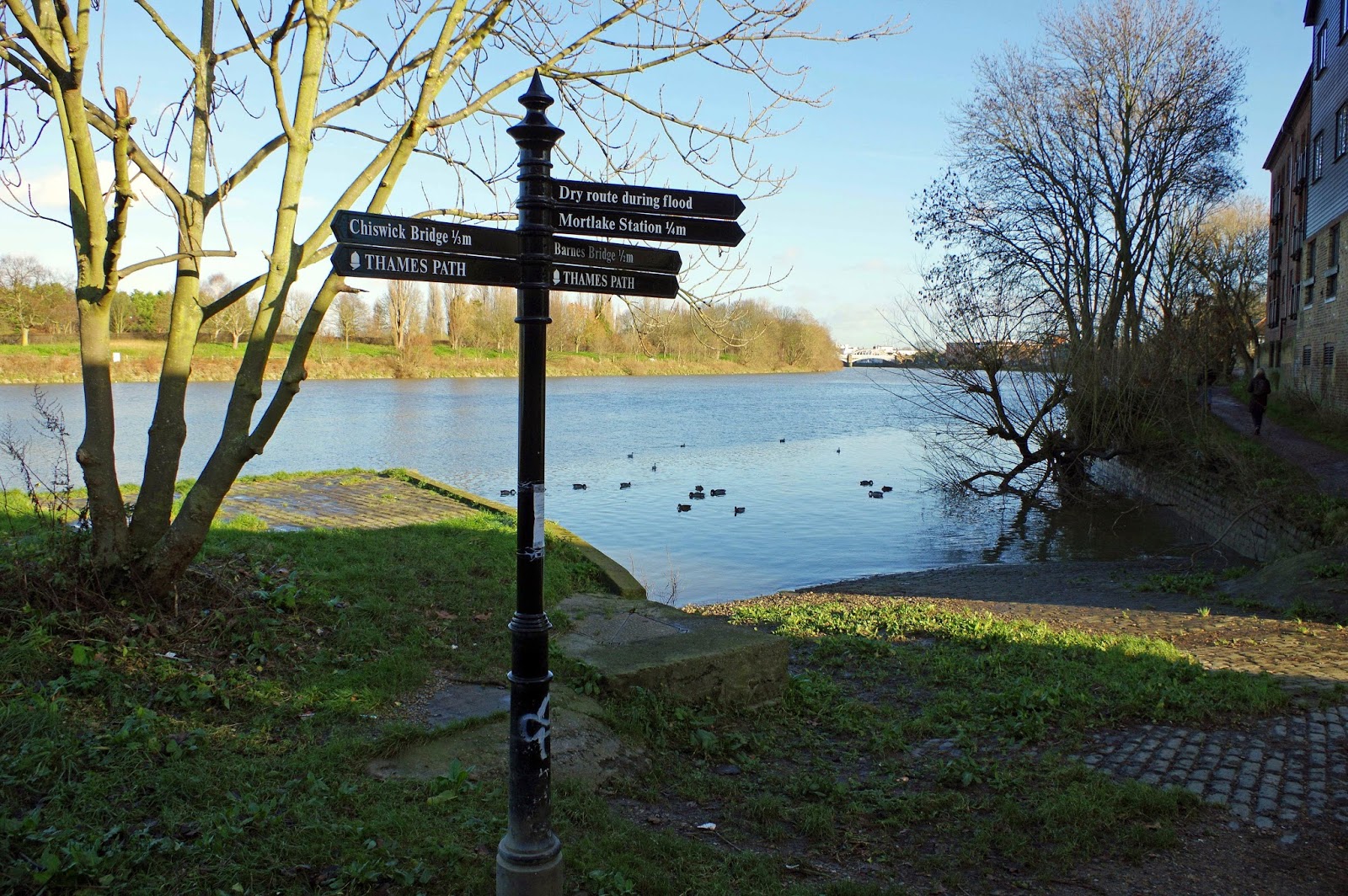 HAIL to the fpot, where Britain's laurel fprings
With item renewed, and rears its growth to heaven ;
What moral beauties, in their claffic robe
Tranfparent, thus in regal ftate exprefs'd,
With fweet benevolence enchant my foul ?
What new creation rifes to my view ?
Where niggard nature every boon denied;
Where earth and water, with ungenial bent,
To form and tafte, and order feem'd averfe.
What powerful Fiat call'd this Eden forth,
Like that firft paradife from chaos form'd,
And o'er the wafte a beauteous world bid rife?

by Henry Jones, an Irishman

whose drunken habits, indolence, coarse manners, and arrogant temper disgusted most of his patrons (according to Wikipedia) 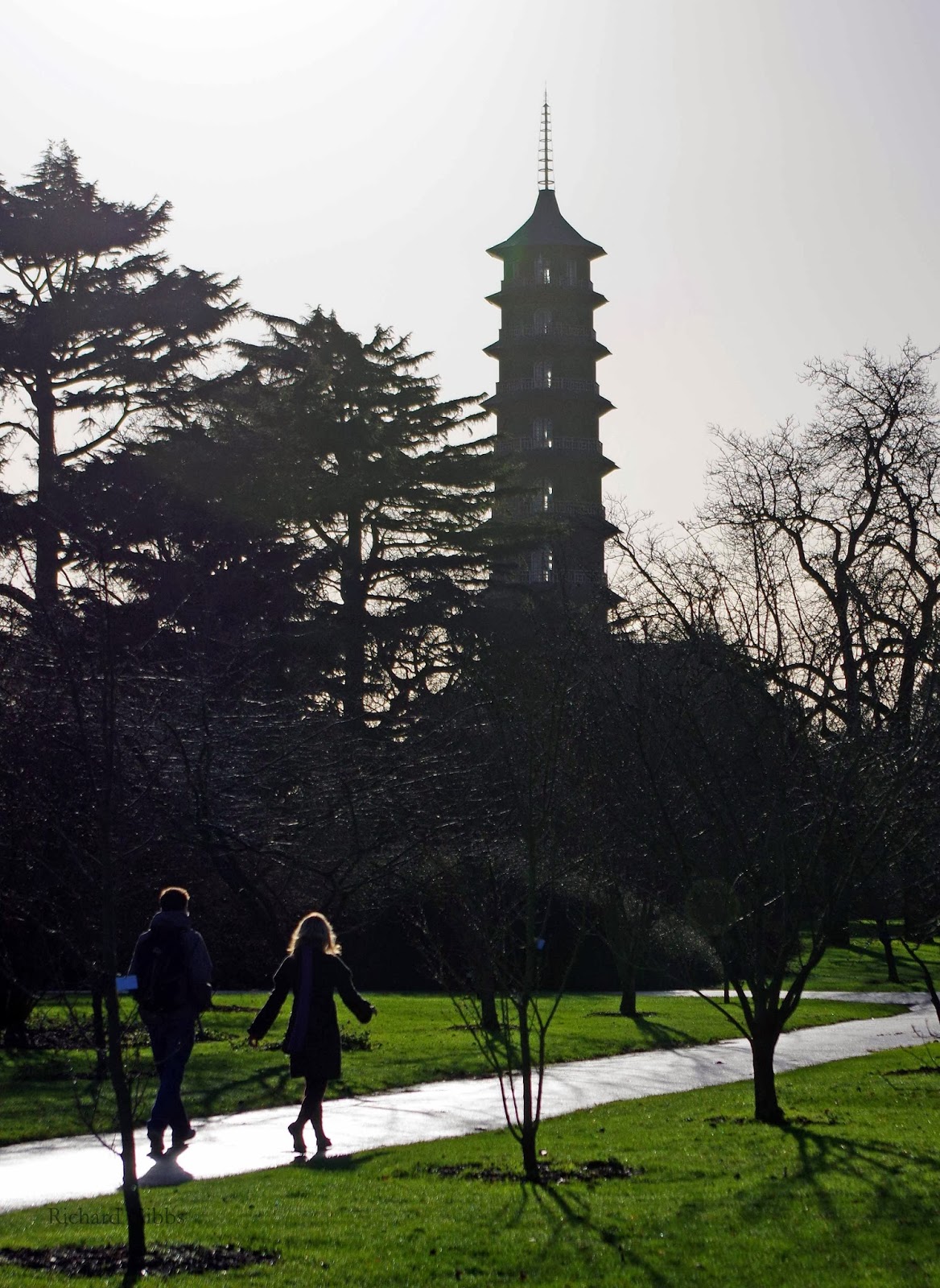 On the finest day this winter I chanced to find myself at the gates of Kew Garden.  My plan was to stroll through the gardens and then take the Thames Path to Putney, but there was an obstacle.  A lady of Irish origin, who I want to call Maeve, wished to extort £14 from me for the pleasure of perambulating dans les jardins!  And this was the discounted price.

And what, pray, do these parterres offer which merits more funds than my journey here from deepest Hertfordshire?
Well,  she said,  there's three hundred acres...
Madame, we have at least that many acres in Hertfordshire!
It's what they charge.....  They're doing a lot of work....

I realised that my options were to pay or not to pay, as so often is the case, these days.  Where's the healthy art of bargaining gone?  Had I known at that point that winter had denuded all but the most evergreen of trees and that precious few plants flower at this time of year, and, most especially, had I been informed that the Temperate House, a place that chimed with the sense of New Year Resolution that fired me at that particular point in time, was CLOSED (fermé, geschlossen, chiuso per restauro) then I would really have fought for a further discount.  But, gentle reader, I am but a meek soul, conditioned by a lifetime of bureaucracy to respect minions behind glass, and so, I paid.

And then, Lo, what did I behold?  Something akin to a Hobbit (an Hobbit?) was helping itself to Holly Berries, as if this was a public park! 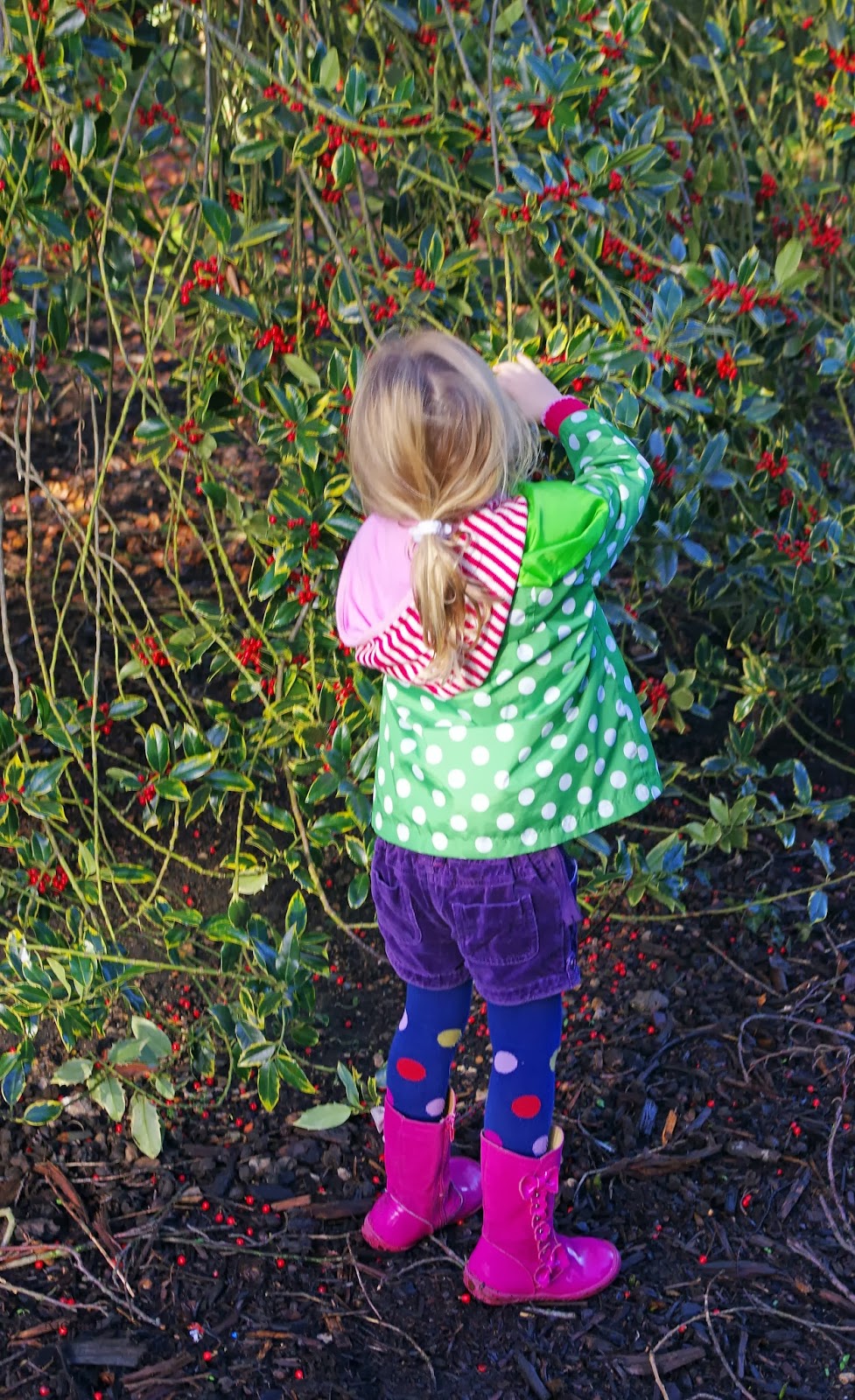 At least the Palm House, the first and greatest wrought iron and hand blown glass construction in the world, a grounded airship, half deflated, stranded like a whale..... was open, and so, temporarily, my hopes were raised.

Even though it seemed to have been appropriated by a crèche..... 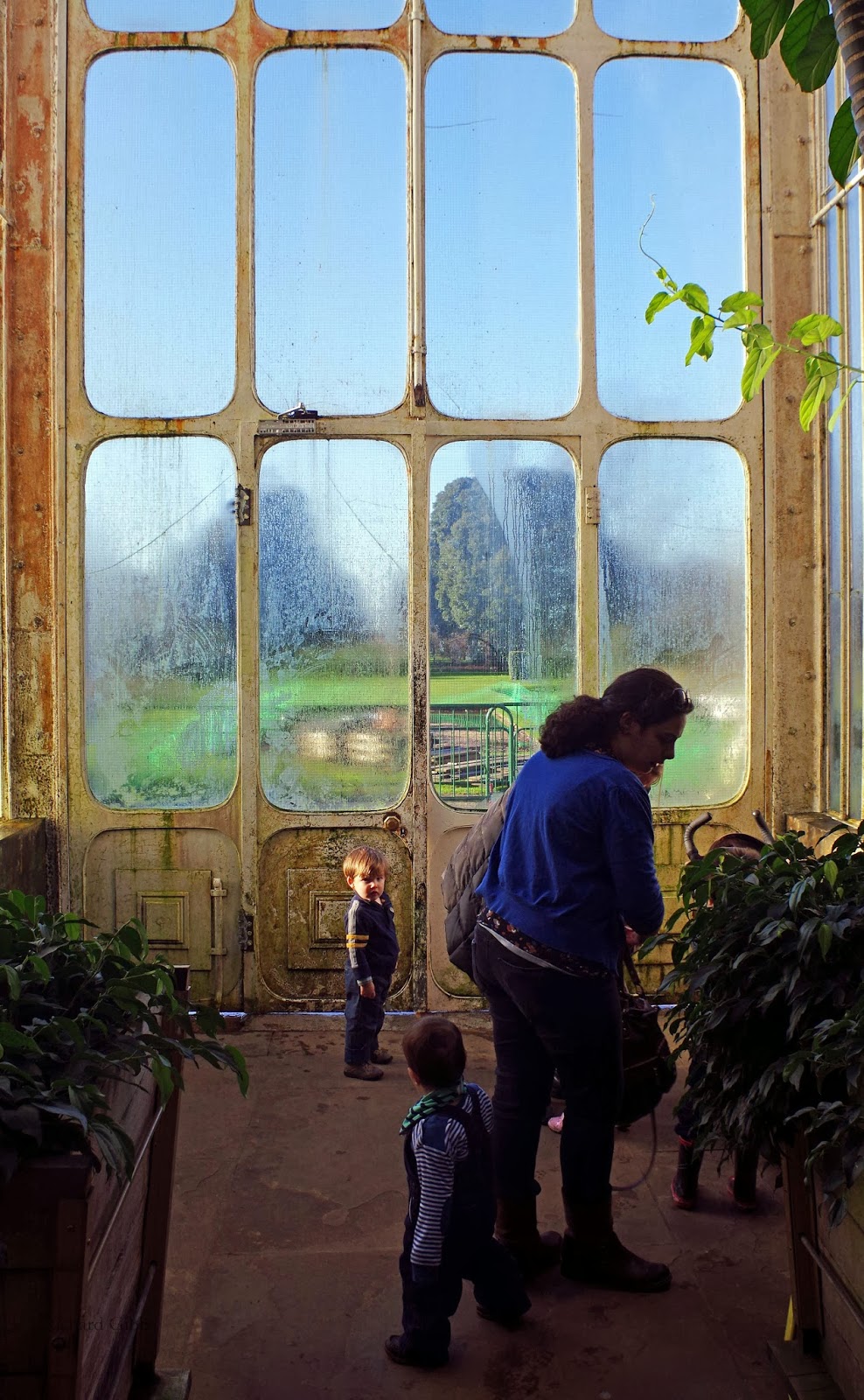 And then, the mortal blow, the Temperate House, far larger than the Palm House, a gleaming steamer of the line, though some years younger, closed, as I said.  Chiuso per restauro!  Agh!  I should have read the small print on their website:


I have only myself to kick!  But how can they justify the entrance fee?

Anyway, it is a lovely day, and my friend and I make the most of the scenery: 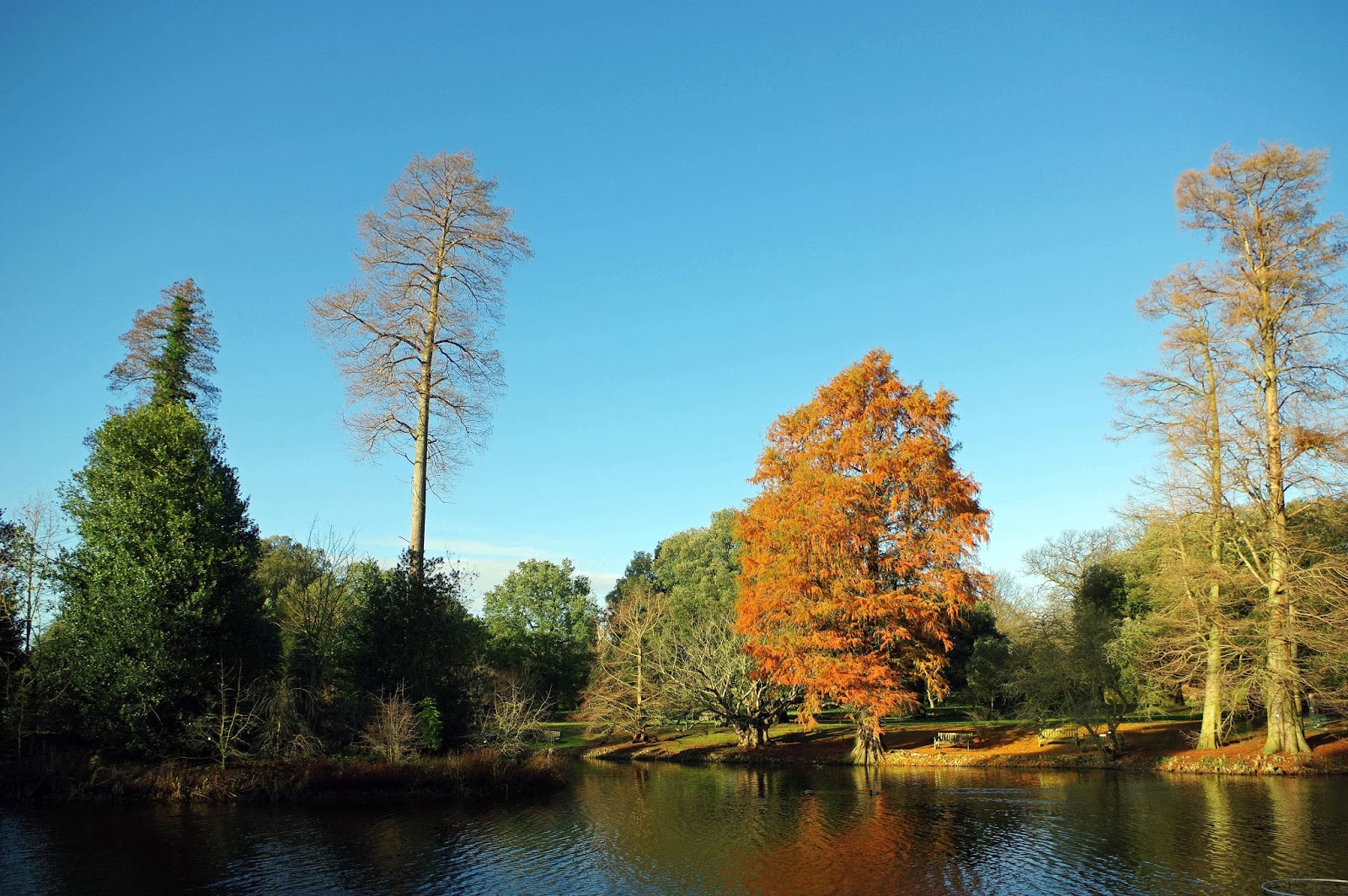 Aeroplanes stuck in the trees, 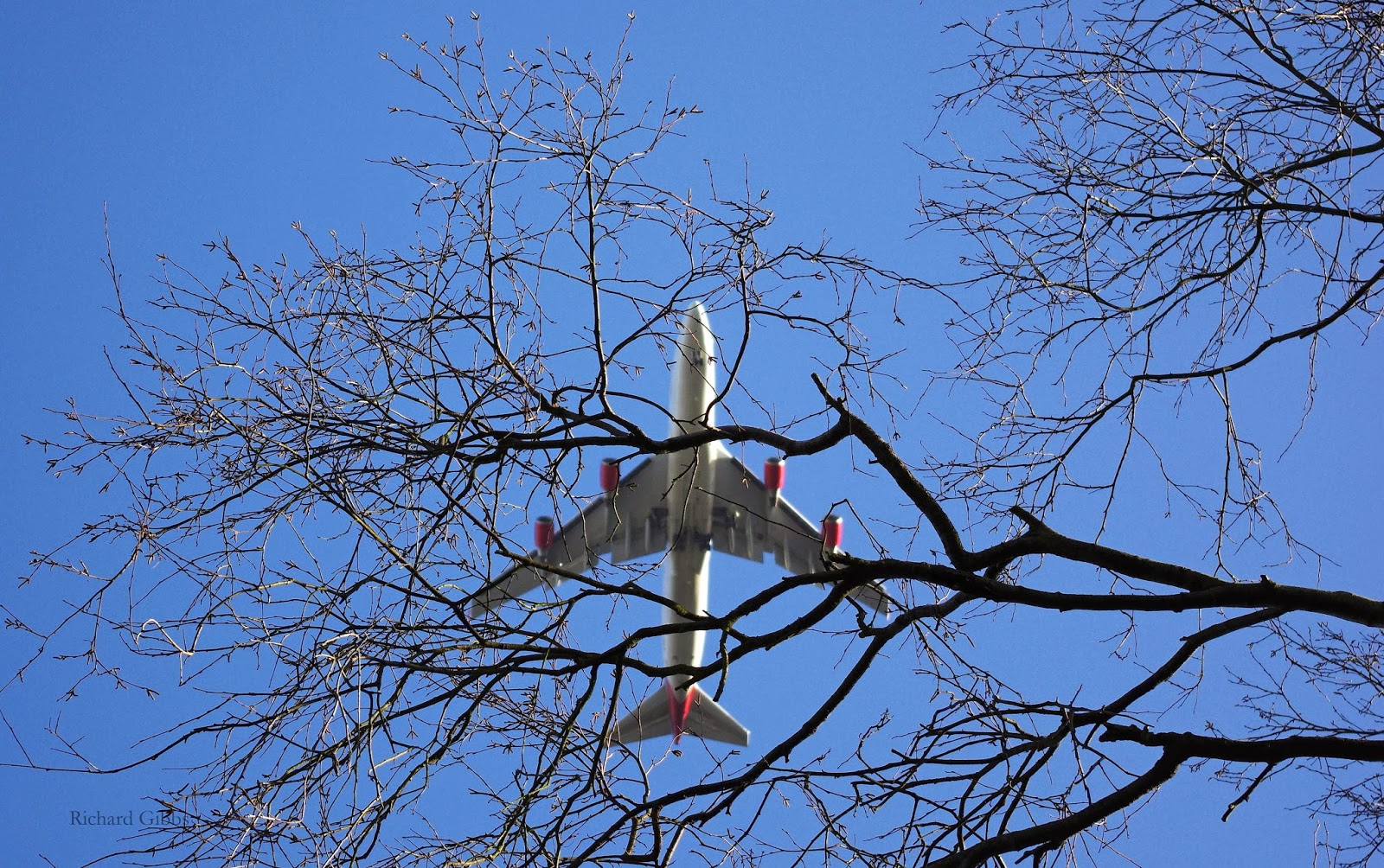 and Pochard (eyed up by a lusty Mallard) enjoying the Chinese Lanterns. 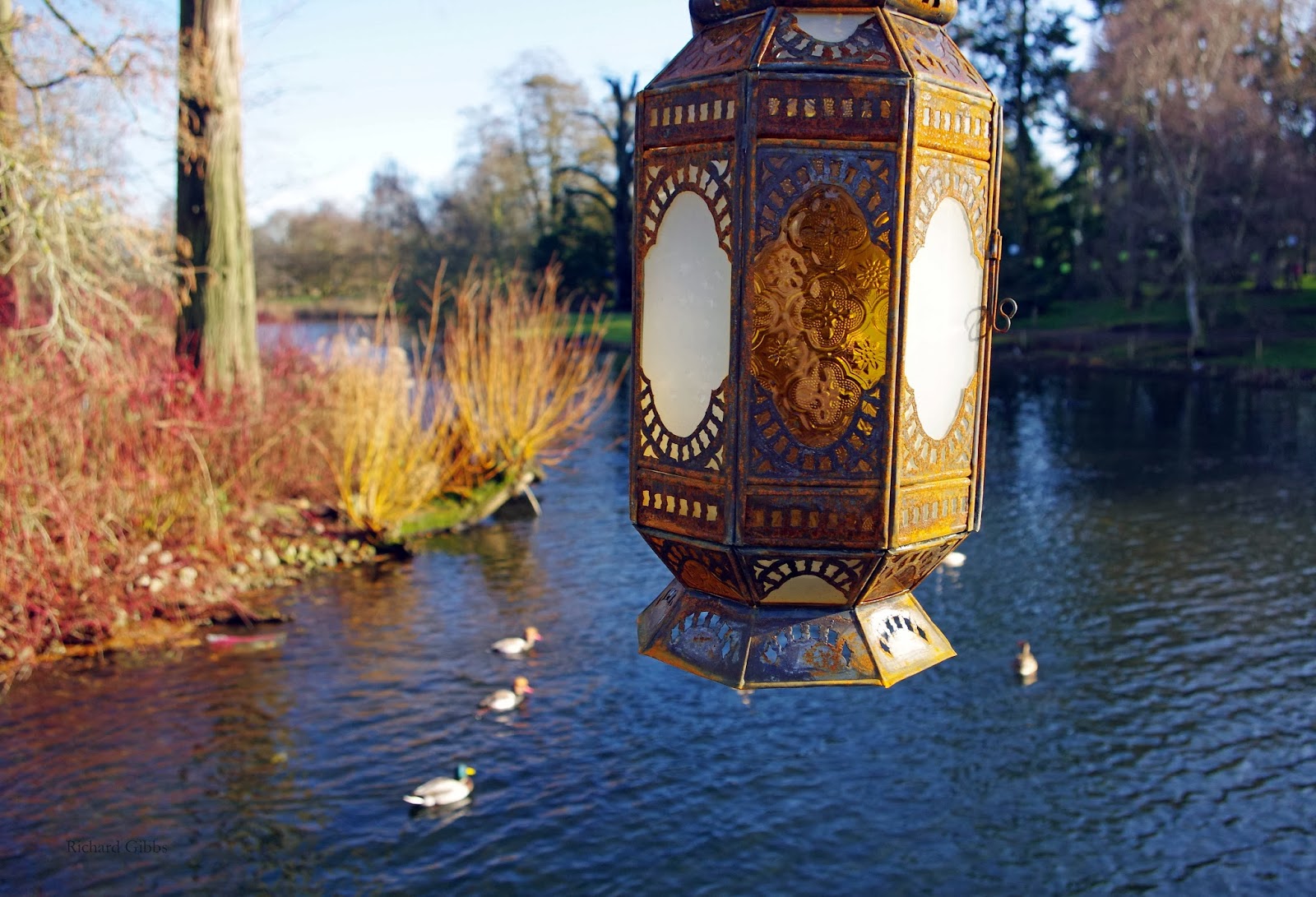 And then, with William Empson, once famed for decorating the bar of the Star and Garter close by the Arts Tower in Sheffield University, in mind, we leave the Gardens to the likes of Thom Gunn, in order to watch the Fuller's Griffin Brewery, Chiswick, float past on the high tide.
Note on Local Flora

There is a tree native in Turkestan,
Or further east towards the Tree of Heaven,
Whose cold hard cones, not being wards to time,
Will leave their mother only for good cause;
Will ripen only in a forest fire;
Wait, to be fathered as was Bacchus once,
Through men's long lives, that image of time's end.
I knew the Phoenix was a vegetable.
So Semele desired her deity
As this in Kew thirsts for the Red Dawn.
by William Empson
﻿
﻿


As Fuller's state on their website, Cultures define themselves heavily through their food and drink. There is nothing more British than beer and Fuller’s is acutely aware and protective of its place in British life.  I am not sure that the same can be said of Budweiser (of St Louis and Newark), especially since the American Eagle can be seen in this photograph to be warding off complaints from the Budweiser Budvarís beers [which] are brewed only in one place in the world, at the Budweiser Budvar brewery in Cesk.....  And neither of these companies belong on the Thames in the Stag Brewery at Mortlake, where Watney Combe and Reid brewed from 1889 (having moved from Victoria) until Scottish Courage leased the premises to Anheuser-Busch Europe Ltd, who have recently announced that, having planned to close it, they will keep it open until 2014, at least......
What was it Empson said, in the Star and Garter, about seven types of ambiguity? 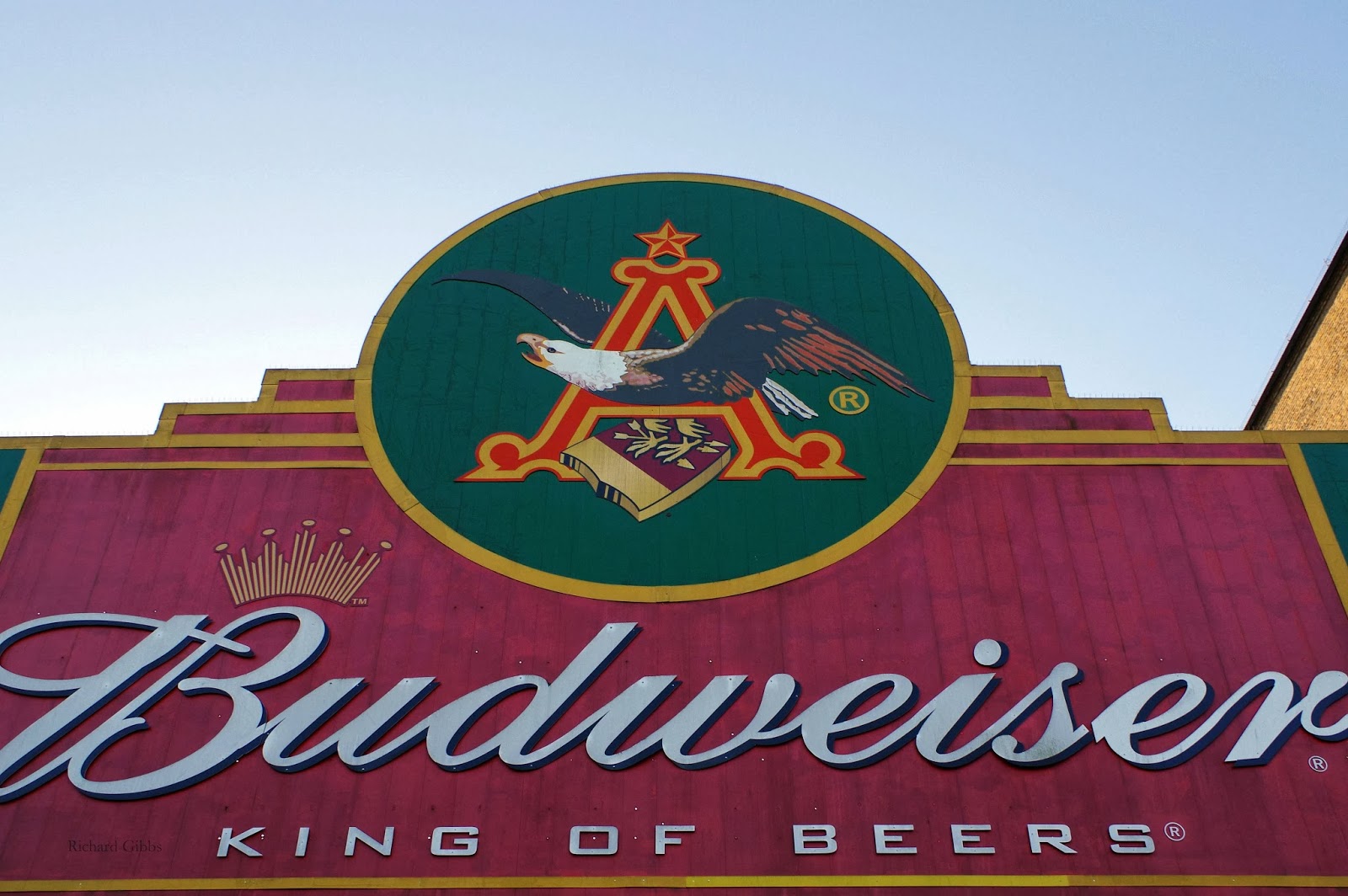 Anyway, we move on.  Leaving poetry behind, we stumble on serious music and the origins of the Royal Ballet, no less, at Edris Stannus (aka Dame Ninette de Valois, 6 June 1898 – 8 March 2001, an Irish/Englishwoman from Wicklow)'s bijou riverside cottage in Barnes.  And only a few doors down, 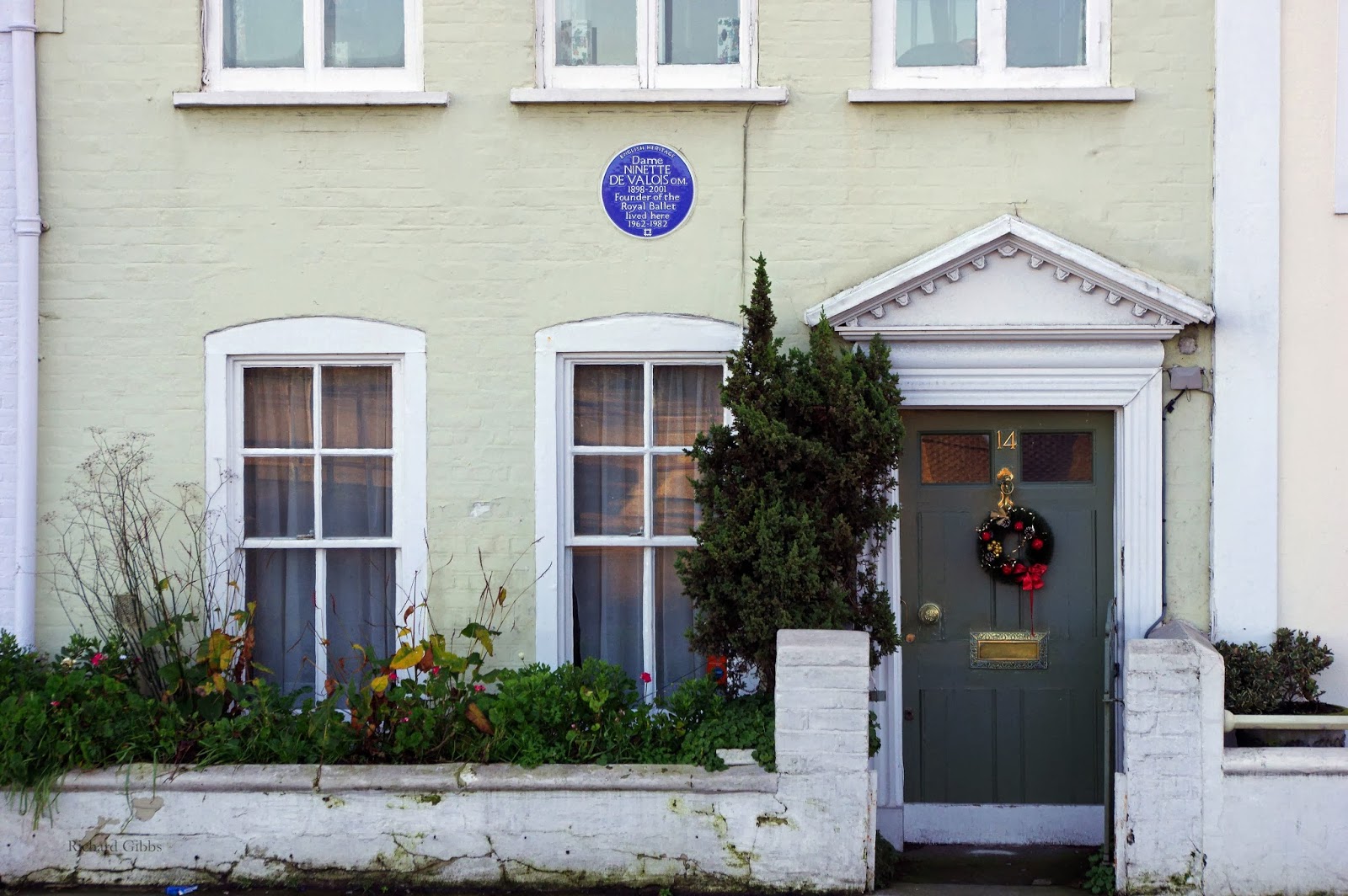 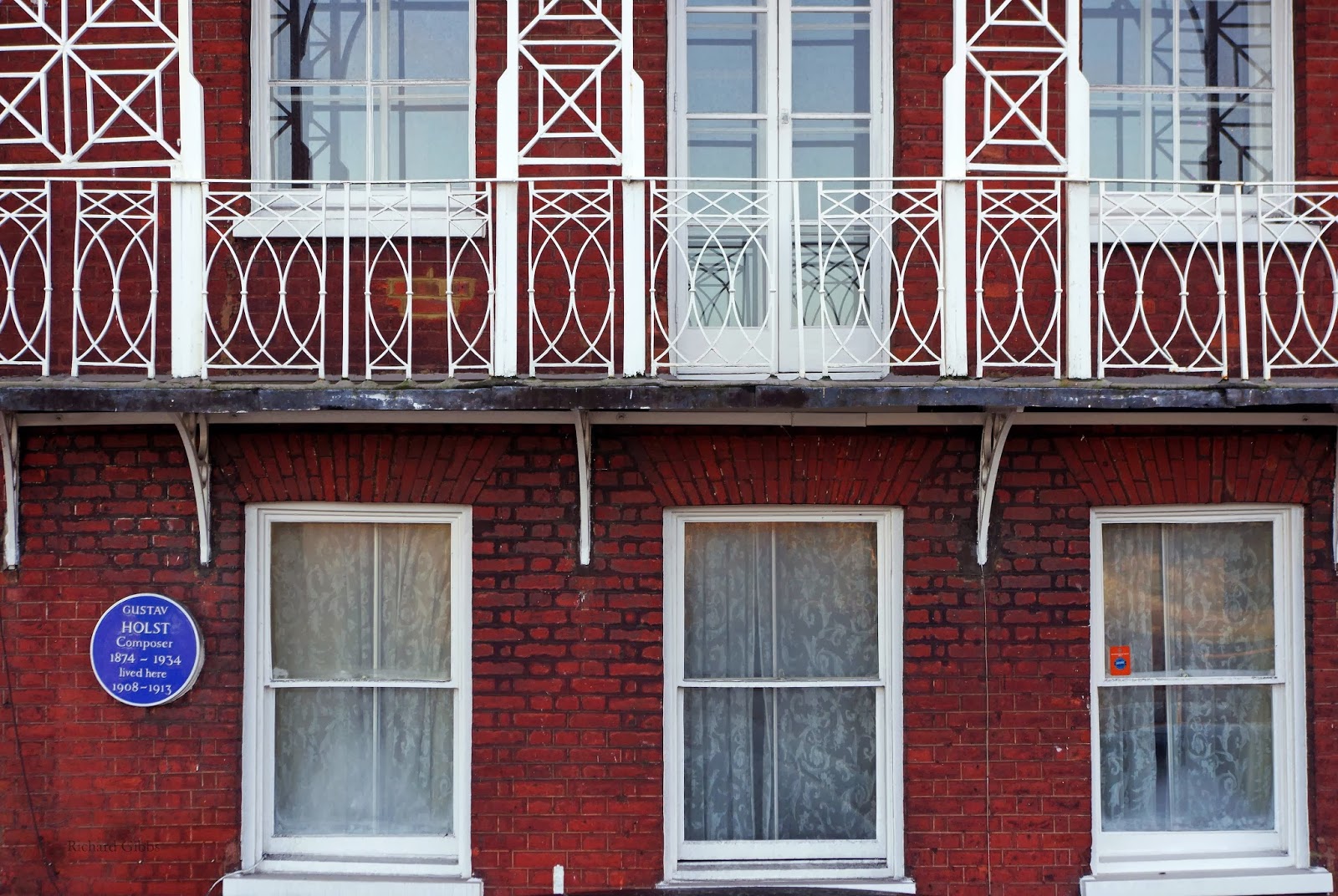 The two no doubt coincided, and one can imagine them enjoying the likes of Humphrey Lyttleton and Ronnie Scott, or the adolescent Rolling Stones, in the music room at the Bull (or Bull's Head to the precious), though sadly Holst predeceased them all. 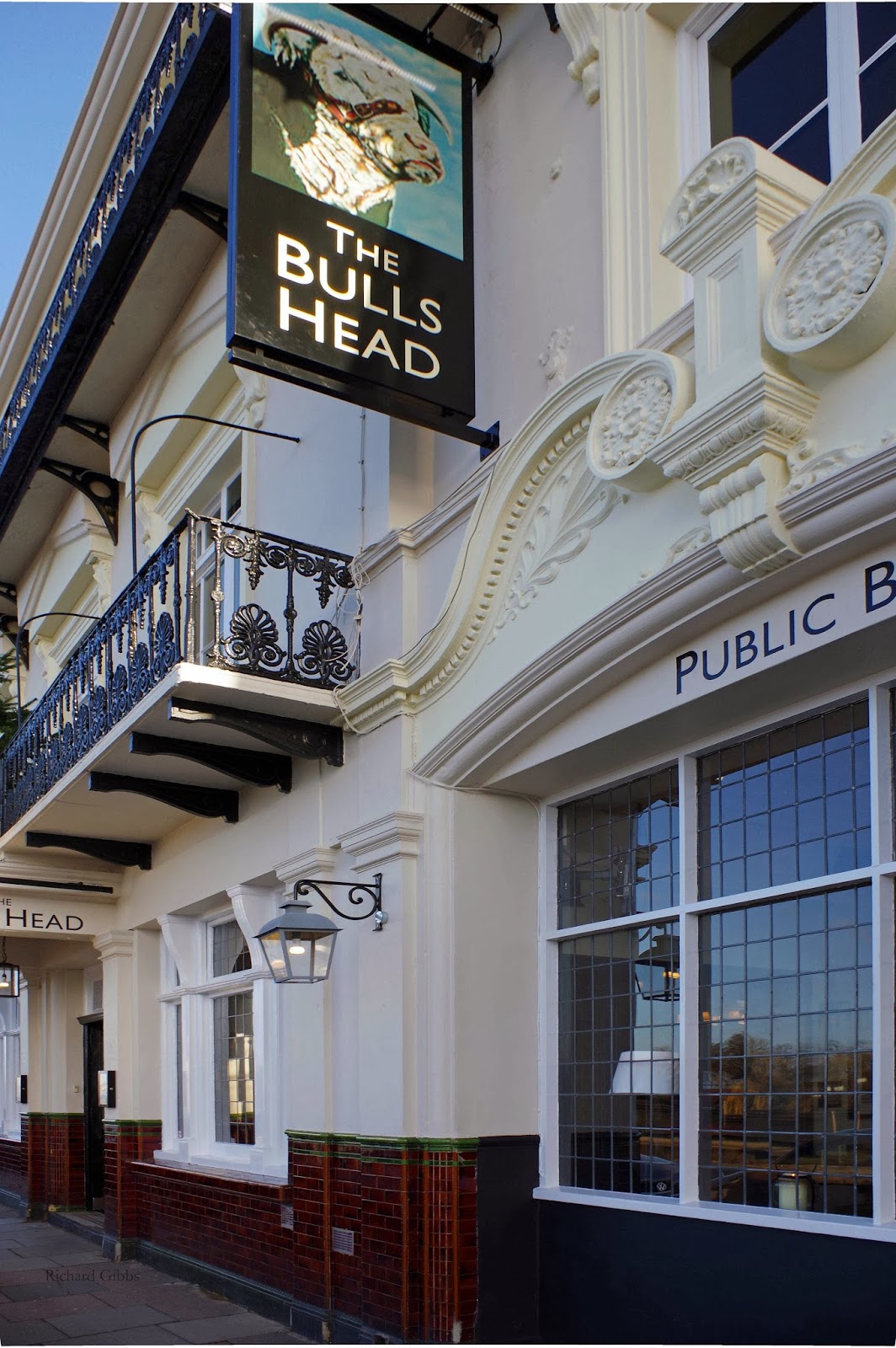 The current management have spruced the place up since I was last there (well that was some forty years ago), purging the residue of fifty years of Zoot Money and Phil Seaman, though they still allow in the odd soul brother (see below, smile please) and keep the jazz traditions going with polyglot bar staff and exquisite sausage rolls..... 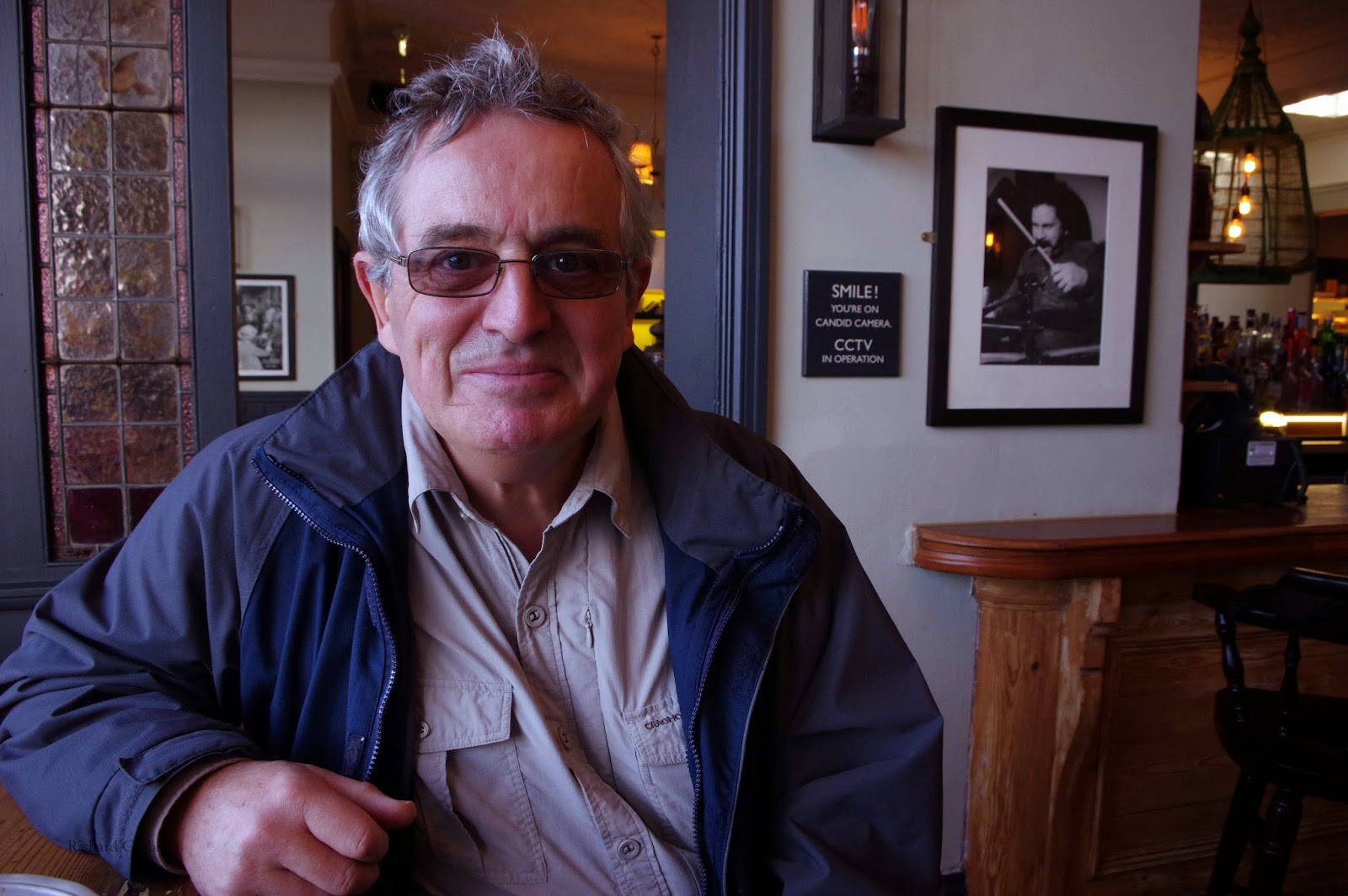 In the meantime, Holst's girls still catch crabs down by the riverside, here seen training outside William Morris's home, 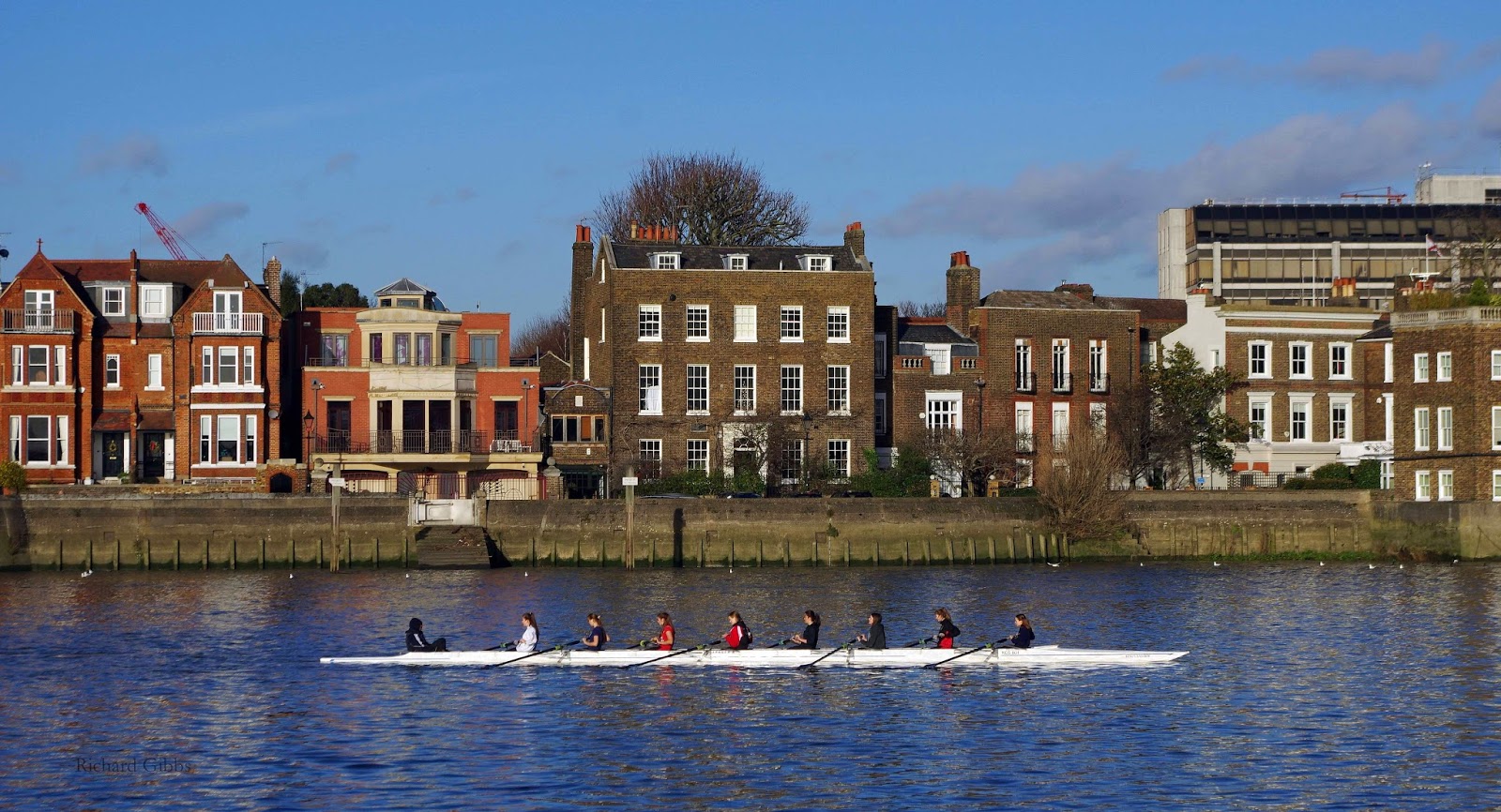 Craven Cottage, the home of Fulham FC, a place to put on your long white robe, yessir.....

The Thames path, puddled and weedy in places, allows for exercise, or contemplation, for heirs, and for Gracies.  At times, such as in this inclement season, it floods (notably at Chiswick, where you park on Chiswick Mall at your peril; or at Mortlake, where an alternative route is signposted; and the northern banks and islands, such as Chiswick Eyot, are ripped and strewn by high tides and heavy rains).  But the sunken cottages behind the newer banks, and the views across the powerful stream, are unspoiled and bright in the unfiltered light.  Uncluttered air enfolds you, and whatever the weather the way is there to follow.  Unencumbered..... 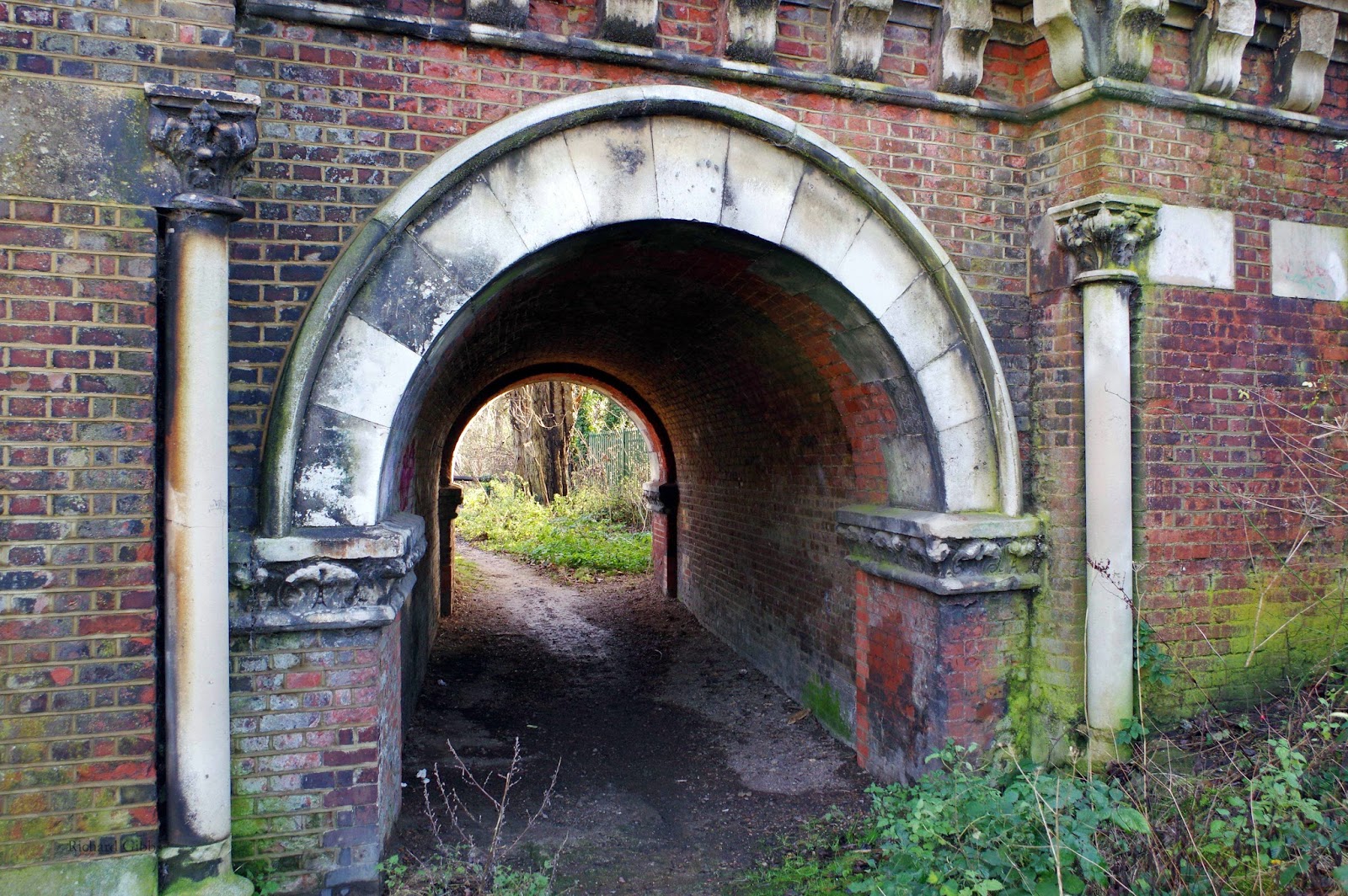 Of course, some people could have started earlier, 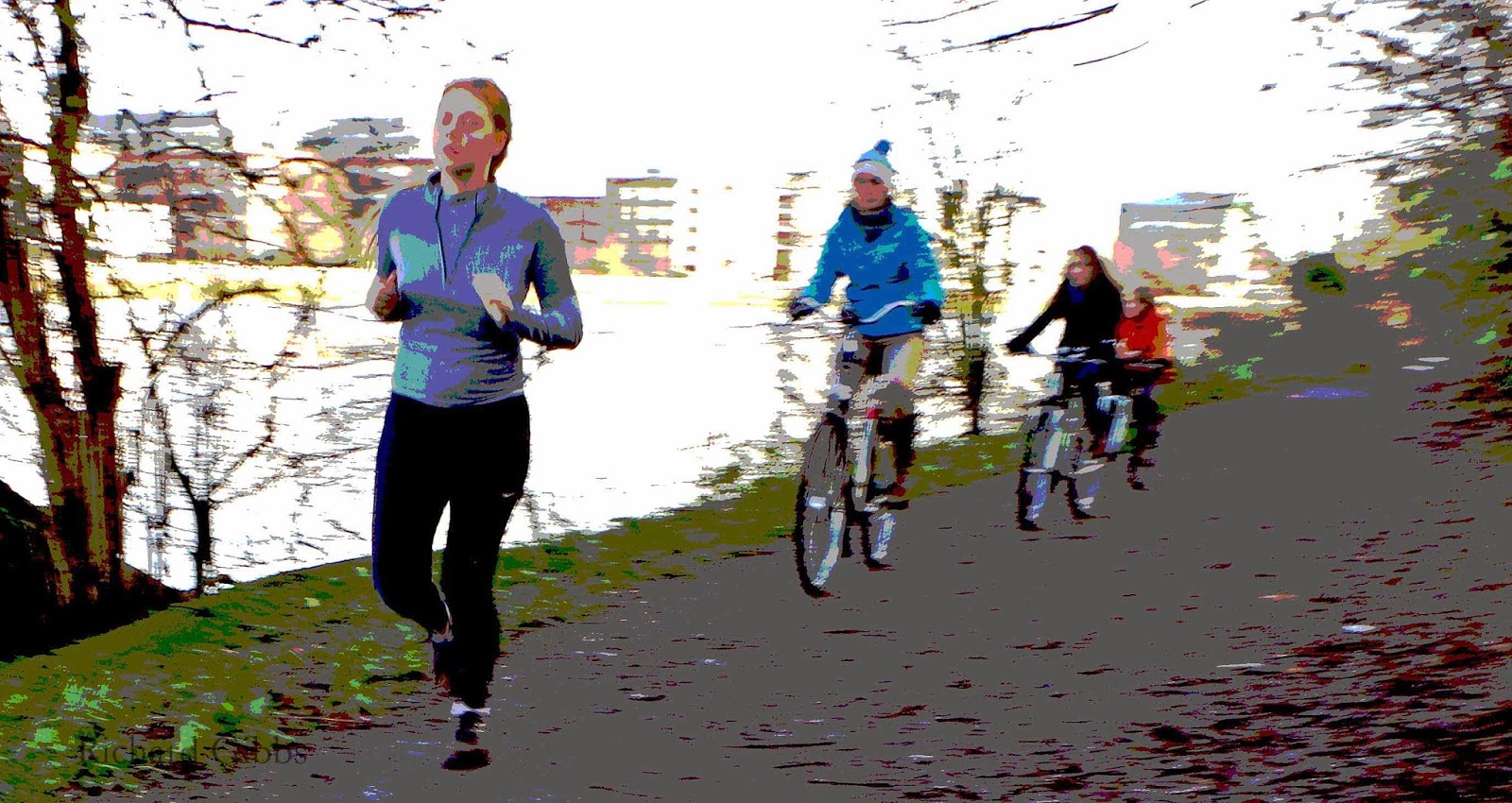 And others could have made more of an effort to be sociable, 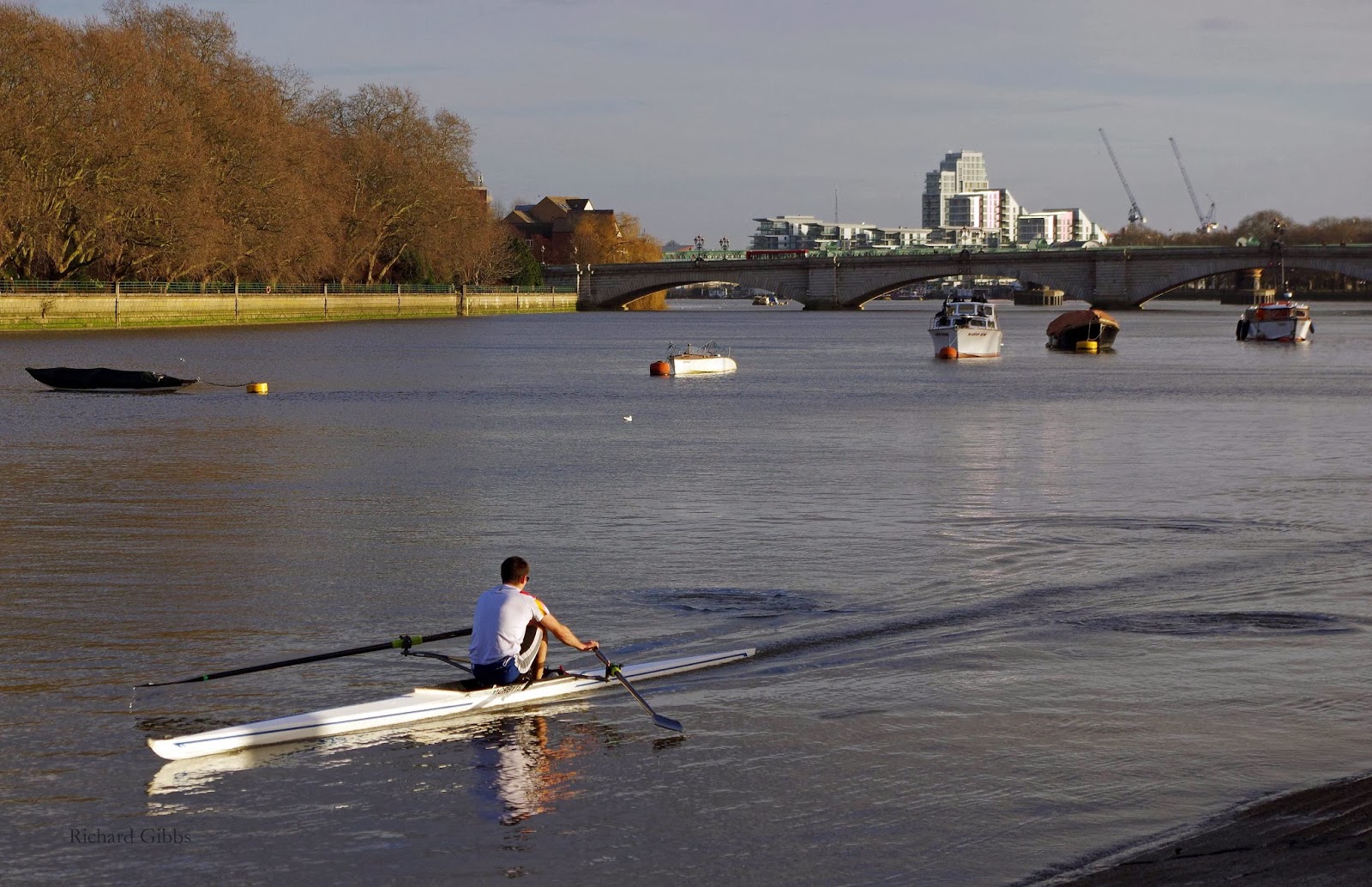 And still others could have spared the time of day, perhaps.... 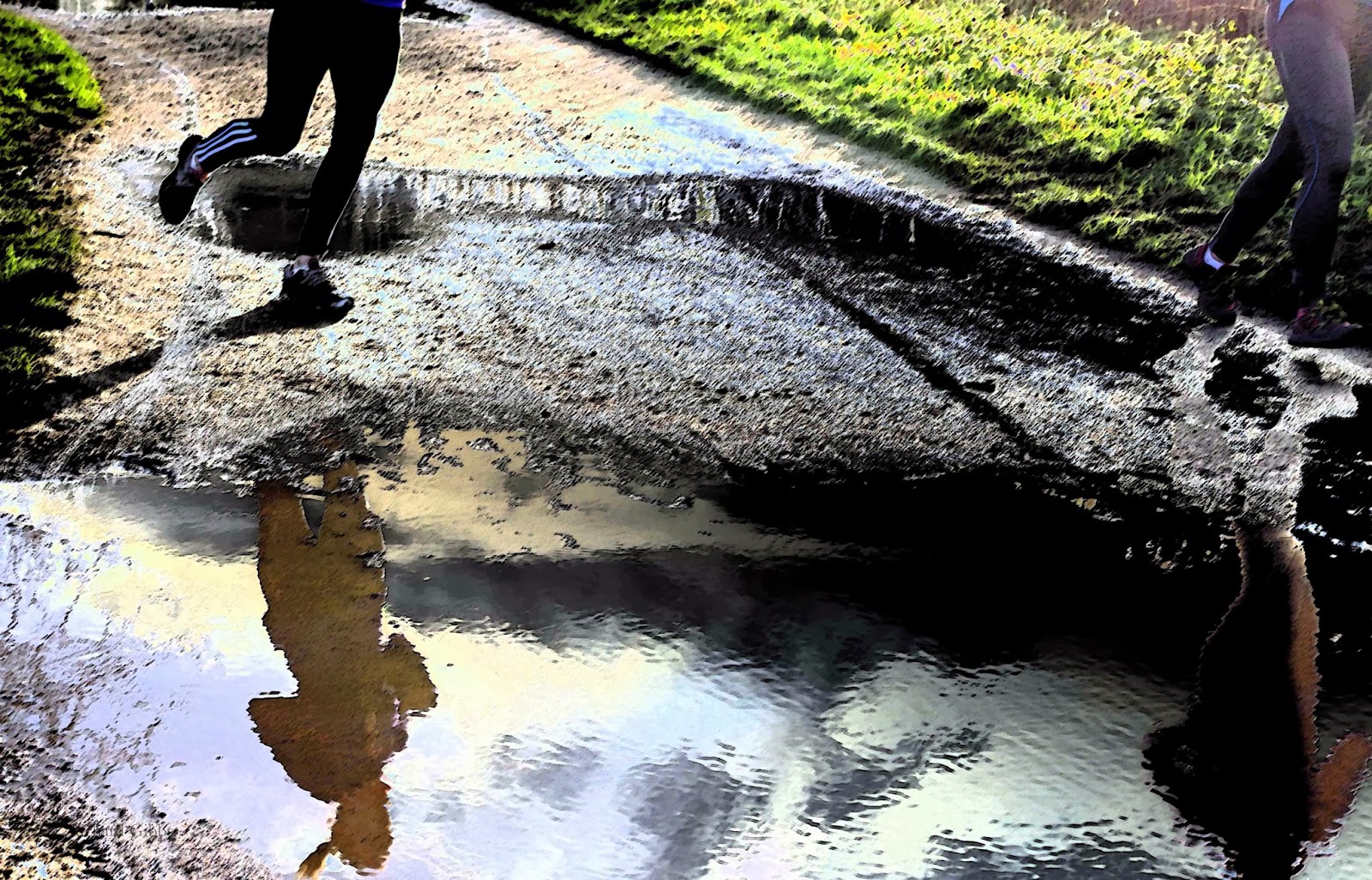 But, when all is dead and sunny, the rather wonderful thing is that the space is free and each is to his, or her, own.  As Putney approaches and a pint at the Bricklayer's Arms, Waterman Street, beckons (in preference to the Star and Garter where one just might get involved with William Empson and his dyspepsia) my rancour at Kew's entrance charges has worn off, and the afternoon's sense of wandering with a river that Ratty and Mole enjoyed so much in The Wind in the Willows, has taken over.
I am going to lay down my sword and shield.  I am not going to study war no more.....