"Maggie Thatcher’s funeral had the Queen, 700 servicemen, 4,000 police officers, St Paul’s Cathedral – everything apart from something every funeral has: real, heart-choking grief..... in my bones I can’t feel that Maggie deserved such a lavish send-off."  Tony Parsons, in "The Daily Mirror."


I would not normally quote Tony Parsons, but I think the above sums up the pomp and circumstance quite nicely. However, I have a different bone to pick. Mrs Thatcher made the following statement some time in her premiership: 'I think we have gone through a period when too many children and people have been given to understand “I have a problem, it is the Government’s job to cope with it!” or “I have a problem, I will go and get a grant to cope with it!” “I am homeless, the Government must house me!” and so they are casting their problems on society and who is society? There is no such thing! There are individual men and women and there are families and no government can do anything except through people and people look to themselves first… There is no such thing as society. There is living tapestry of men and women and people and the beauty of that tapestry and the quality of our lives will depend upon how much each of us is prepared to take responsibility for ourselves and each of us prepared to turn round and help by our own efforts those who are unfortunate.'


And then, when she planned her own munificent send off, she chose to have the assembled congregation sing the following (though not in the original version):

Who would true valour see,
Let him come hither;
One here will constant be,
Come wind, come weather.
There’s no discouragement,
Shall make him once relent,
His first avowed intent
To be a pilgrim.

Who so beset him round,
With dismal storys,
Do but themselves confound;
His strength the more is.
No lyon can him fright,
He’l with a giant fight,
He will have a right,
To be a pilgrim.

Hobgoblin, nor foul fiend,
Can daunt his spirit:
He knows, he at the end,
Shall life inherit.
Then fancies fly away,
He’l fear not what men say,
He’l labour night and day,
To be a pilgrim.

I don't dispute her right to hold this as one of her favourite hymns, and the music, modified from the traditional Sussex tune, "Monk's Gate" by Ralph Vaughan Williams, is inspirational.  It was one of the hymns I sang with schoolmates in the back of a three ton truck one summer in Westmorland, to make a bone-juddering journey slightly more bearable, and somehow we all knew it by heart.

But having taken an interest in John Bunyan, I find it more difficult to reconcile this choice with the life and death of Mrs Thatcher.  As a Methodist, it was not surprising that she should also choose the Wesley Brothers as favourite hymnists, but the idea of her being a pilgrim does not quite work for me, as the prominence of this occasion smacked of self-aggrandisment and perhaps even a little last attempt to lecture the public, and it ever so slightly sticks in the craw.

John Bunyan was born in 1628, the son of a tinker.  He was raised in the village of Elstow, just south of Bedford, and in his youth he was coarse, violent, disrespectful and wayward.  It was not until after he was married, which was after he had been conscripted into the Parliamentary army in the Civil War, that he began to change his ways.  Although he attended services (and rang a bell) in the Abbey Church of St Mary and St Helena, he still carelessly spent plenty of his time sinning (which included playing games on the Sabbath).  But it was during one of these illicit games, on the green at Elstow, that he heard a voice from heaven say to him, "Wilt thou leave thy sins and go to heaven, or keep thy sins and go to hell?"

In about 1655 Bunyan became a member of the Separatist Church in Bedford, and with the help of its leader, John Gifford (also a reformed character) he began to preach. Then, following the Restoration of the monarchy, with Charles II as king, Bunyan was prosecuted under an Elizabethan Act for preaching illegally, and was sent to Bedford Gaol (not actually the current prison, but an earlier and probably less salubrious one).

Despite the efforts of his second wife, who had Bunyan's three children to support (the eldest of which was blind) this imprisonment lasted for twelve years until, in an attempt to placate grievances about his Catholic leanings, Charles II issued a Declaration of Indulgence, which freed numbers of Dissenters.  So now Bunyan was able to pursue his role as pastor of the Bedford Congregation, as well as continue with his writings (he published approximately 60 books or pamphlets in his lifetime).


"Grace Abounding" was first published in 1666, during his first imprisonment.  This is an outstanding example of a recognised Puritan genre, a spiritual autobiography which takes the reader through the crises of conversion and the attainment of grace.  It also tells us something of his imprisonment, but it is the fluency of the prose, and the quality of its introspection and dramatic power that make this work stand out from the crowd.  In thinking about the late twentieth century and the years of the Thatcher governments, the following passage may strike a chord:  "While I was thus afflicted with the fears of my own damnation, there were two things would make me wonder; the one was, when I saw old people hunting after the things of this life, as if they should live here alwayes; the other was, when I found Professors much distressed and cast down when they met with outward losses.....  Lord, thought I, what a doe is here about such little things as these?  what seeking after carnal things by some, and spend so many tears for the things of this present life......"


He was imprisoned again but finally released in 1677, and the first part of "The Pilgrim's Progress" was published in 1678.  This was followed by "The Life and Death of Mr Badman," and "The Holy War" and then a second part to "The Pilgrim's Progress," which contains the one and only hymn attributed to him.  He continued his preaching and pastoral duties right up to his death in 1688, which occurred in London, following a visit to reconcile a father and son in Reading.  He was buried in Bunhill Fields, London, 'The Campo Santo of Dissenters.'

Although the landscapes of Bunyan's days have been scoured and beaten and built on and enclosed, there is a 77 mile Bunyan Trail which takes the walker through attractive villages and past sites associated with Bunyan's life and with his masterpiece.  Not far from Ampthill, for example, just up The Hill of Difficulty (actually the B530) there are the ruins of Houghton House, a former Jacobean Hunting Lodge, built in 1615 for Mary, Countess of Pembroke.  This was the Palace Beautiful, where Christian rested and was armed.
From here it is also just possible, on a clear day to see the Delectable Mountains, as Bunyan called the Chiltern Hills to the south.

But looking back towards Bedford, it is also possible to see the looming shapes of the R101 Airship sheds at Cardington, which have nothing to do with Bunyan, except for the fact that these two vast buildings represent a dream of travelling, which connects in a curious way with the Pilgrim.

On a completely different scale, Bunyan is remembered in different parts of Hertfordshire and Bedfordshire and one tranquil spot is Coleman Green, where the remains of a pair of cottages have been preserved as a site where Bunyan stayed and preached.  And nearby stands the John Bunyan pub, a neatly congregational way of commemorating one of the great English writers and preachers.


I think it is this rural setting that endears me most to Bunyan.  As a young man, as a soldier and as a tinker, he walked far and wide in his home counties.  As a preacher, clandestine and otherwise, he held meetings in the open air, in woodland hollows, using trees as pulpits and the open air as his ceiling.  He was, by all accounts, a remarkably gifted preacher, and drew large congregations wherever he went, which also included churches in London towards the end of his life. 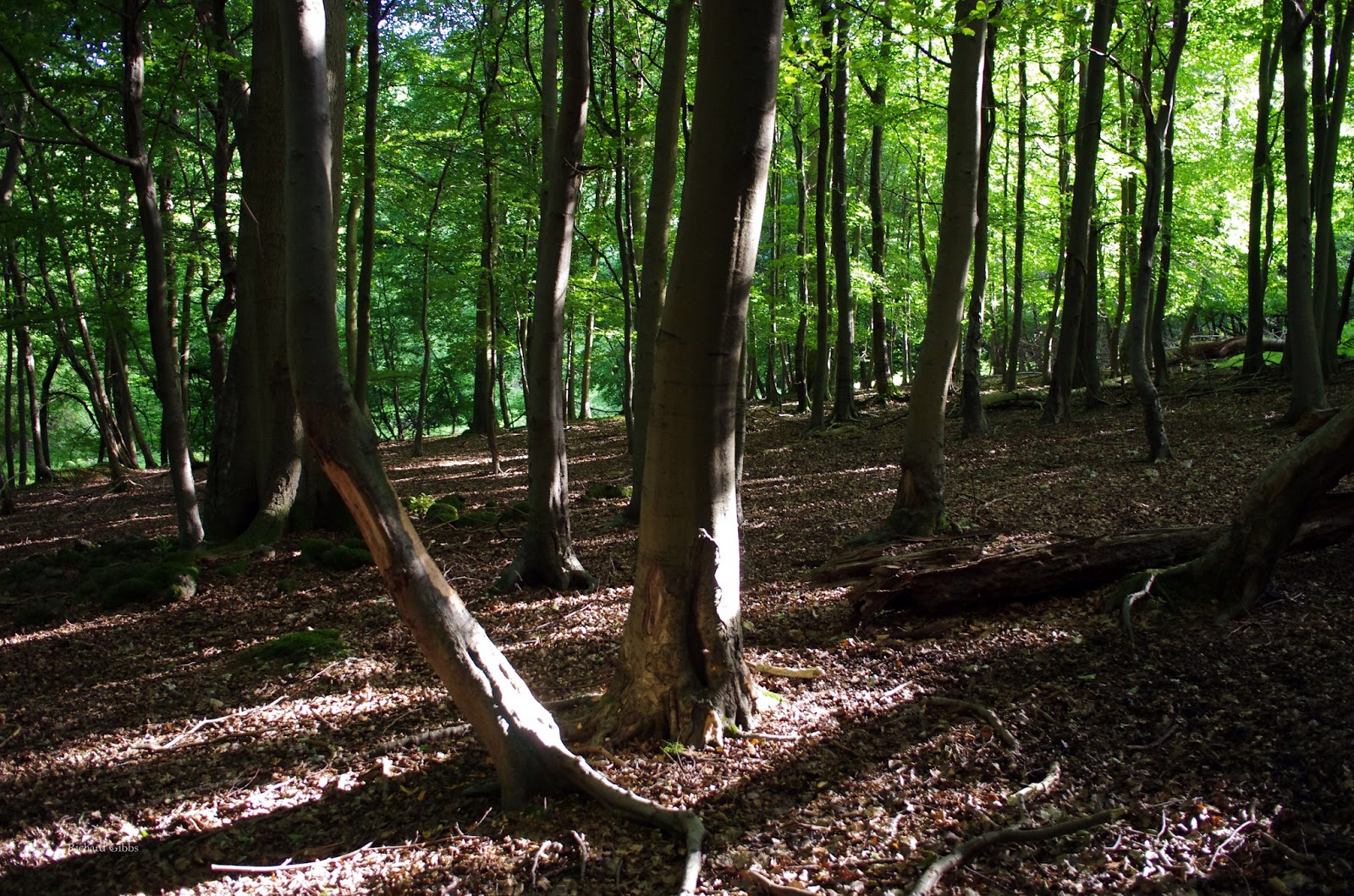 In his lifetime, the congregation in Bedford met in an old barn acquired by collection, but now the site is occupied by an elegant church, with sculpted bronze doors (modelled on the baptistery in Florence) and stained glass windows depicting scenes from "The Pilgrim's Progress,"  installed to mark the tercentenary of Bunyan's death.

"The Pilgrim's Progress" is a remarkable book.  Although I doubt whether it is as widely read today as in the past, it was reckoned at one time to be the second best selling book of all time after the Bible.  It has been translated in many languages, and is a wonderful allegory which has not lost meaning through the years.  The vision of the Pilgrim, on his way to the Celestial City, with his burden on his back, beset by all manner of difficulties and plagued by distractions and obstacles, is a vision for us all:  even Mrs Thatcher, of course, as she is/was no different from other members of society.

I cannot help but feel, however, that it was not for this reason that she chose the hymn.  I cannot help but feel that she wanted to be seen as one who has succeeded on the journey, a woman of true valour, not frighted by lyons, nor daunted by hobgoblins nor foul fiends.  She fought the giants, and she had the right, in her eyes, to be a pilgrim; or rather, in her own mind perhaps, a heroine, a champion who deserved the hero's obsequies.  I am afraid that, while I hope she rests in peace, ultimately society owes far more to John Bunyan than it does to Mrs Thatcher.

And, by a strange coincidence, I received this link not long after posting this piece:  a modern take on Bunyan's words: