We are in Montalbano country, on the trail of Luca Zingaretti and others.  The series of Inspector Montalbano stories, written by native of Port Empedocle, Andrea Camilleri, began in 1994 (with "The Shape of Water") and has continued up to the present day with twenty books, all of which have been filmed.  We are also now into a series called Young Montalbano and four more episodes of this are due to be released soon on Italian TV.

Camilleri, although 86 now, has been writing since he was twenty, but only started the Montalbano series when he was stuck on another book.  He recently said in an interview with Mark Lawson that, In my books, I deliberately decided to smuggle into a detective novel a critical commentary on my times. This also allowed me to show the progression and evolution in the character of Montalbano.  And so we find comments on bureaucracy, politics, the Mafia and contemporary Sicilian issues.

Like many others, I have been attracted by both books and films, by the colourful characters, the plots, the humour, the scenery and architecture, and by the food. 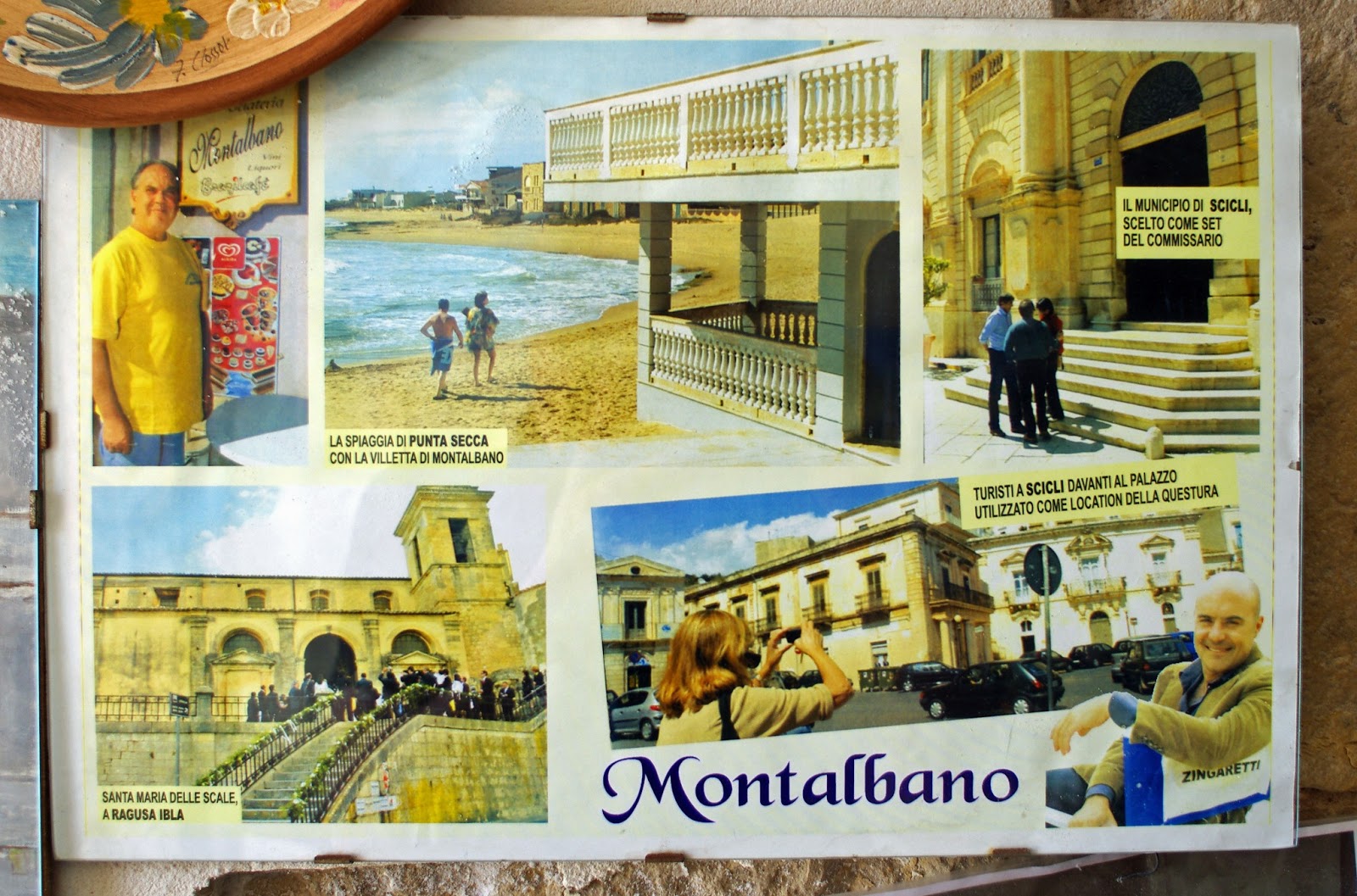 I came late to this author and the films, only relatively recently discovering them on BBC4, but immediately fell under their spell. And this was one reason I wanted to stay in the south-east of Sicily, to see for myself some of the locations and perhaps enter for a moment a different world.


The landscape of this part of Sicily is different from the volcanic region around Etna and the old sandstone hills of Agrigento.  Here we are on the Ragusa Plateau, which is principally limestone, and so we find clefts suddenly dropping away as gorges.  The opening sequence of the Montalbano films shows this well, and also nicely foregrounds the extravagant stilted roadways that save those precious minutes spiralling down and up again as one once did with one's donkey!

The films have been shot on various locations around the area, from Siracusa to Ragusa, Modica to Scicli. Montalbano's home is actually at Punta Secca, a tiny, sleepy resort almost twenty kilometres from his office in Vigata, which is actually Scicli.

Scicli was a delight, and I would probably never have gone there if it wasn't for Montalbano.  You virtually fall off a cliff into it, but then it is laid out in bright squares and shady streets.

Having need of a hat (the perils of a soft-top car!) I ask the girl in the sports shop whereabouts I might find Inspector Montalbano.  She brightened immediately and enthusiastically directed me to his office.


This is actually the town hall, but once was a Benedictine convent attached to the church next door. After the 1693 earthquake, which devastated much of southern Sicily (2,000 people died in Scicli alone), the building was restructured, and the convent declined, though the church still has grilles across the balconies to keep the nuns back from inappropriate eyes.  Then in 1906 the main building was once again renovated to give it its present neo-classical appearance.  The current mayoral office on the first floor is used as the office of Luca Bonetti Alderighi, Montalbano's Head of Department.

The man in black in the picture is Enzo, who became my friend for the morning and showed me not only the streets and the church but also guided me around the Palazzo Spadaro, which could be a film set for Il Gattopardo with its silk walls and crystal chandeliers, mirrored ballroom and genteel withdrawing room.


The Palazzo also houses works by members of the "Movimento Culturale Vitaliano Brancati" a circle of local artists founded in 1980.  Two of these, Carmelo Candiano (born here in 1951) and Franco Polizzi (also born in Scicli in 1954)  gained recognition at the Accademia delle Belle Arti di Venezia.  Their work celebrates the colour and warmth of Sicily.  Polizzi was associated with Renato Guttoso in Rome, but Candiano, who works mainly as a sculptor, uses local materials and still lives in Scicli.  I love their bright skies and the way the buildings seem to live in the pictures.


Scicli has another surprise for us as we walk back to the car.  Although the traffic is light, I suddenly find myself almost run down by a horseman, who then coolly rides round to a bar, and hitches his steed to a table.  Not something you see every day!

We explore the coastline, where much of the action in the dramas takes place.  Agave reach for the sky, while sand and sky kiss at the water's edge.

The building in the picture below was a furnace of some kind, probably producing lime, though there is no indication now as to what it was.  It is the one place I felt a little uncomfortable on our tour, as something slightly odd is going on along the shore.  Individuals sit in their cars, smoking.  A gang of German bikers stand around.  It may be that this is the seediest place in the films, where transvestites and prostitutes parade, but I find myself wondering which came first, the myth or the reality.

We also visit Ragusa, where again the 1693 earthquake caused mayhem.  The old part of the city was completely destroyed, and many inhabitants decided to start afresh on the opposite hill,  Some stalwarts, however, were not easily bested and so Ragusa Ibla reappeared from the ruins.  It is now a wonderful maze of alleys and squares, gracious churches and palaces.  Here Marcello Mastroianni lived in "Divorce, Italian Style" a 1961 Oscar winning film, and here Montalbano also talks and walks with stunning backdrops.

While in this area we stay at another renovated seventeenth century Masseria.  This is Nacalino Agriturismo run by Tina and Filippo.  It is a perfect place to rest, with excellent food, all from local produce - smoked ricotta, sun-dried tomatoes, yoghurt, cheese, olive oil, zucchini, beans, wine.  Filippo works the farm (he has thousands of carob and olive trees, varied livestock, vegetables and crops in four parcels of land, as much as twenty kilometres apart) but is also constantly working on restoring the masseria, which is beautiful.

Amongst the colours around us are the silver green of olive leaves and the darkest, almost black, green of carobs, to the orange and red of the many different citrus fruits that abound. 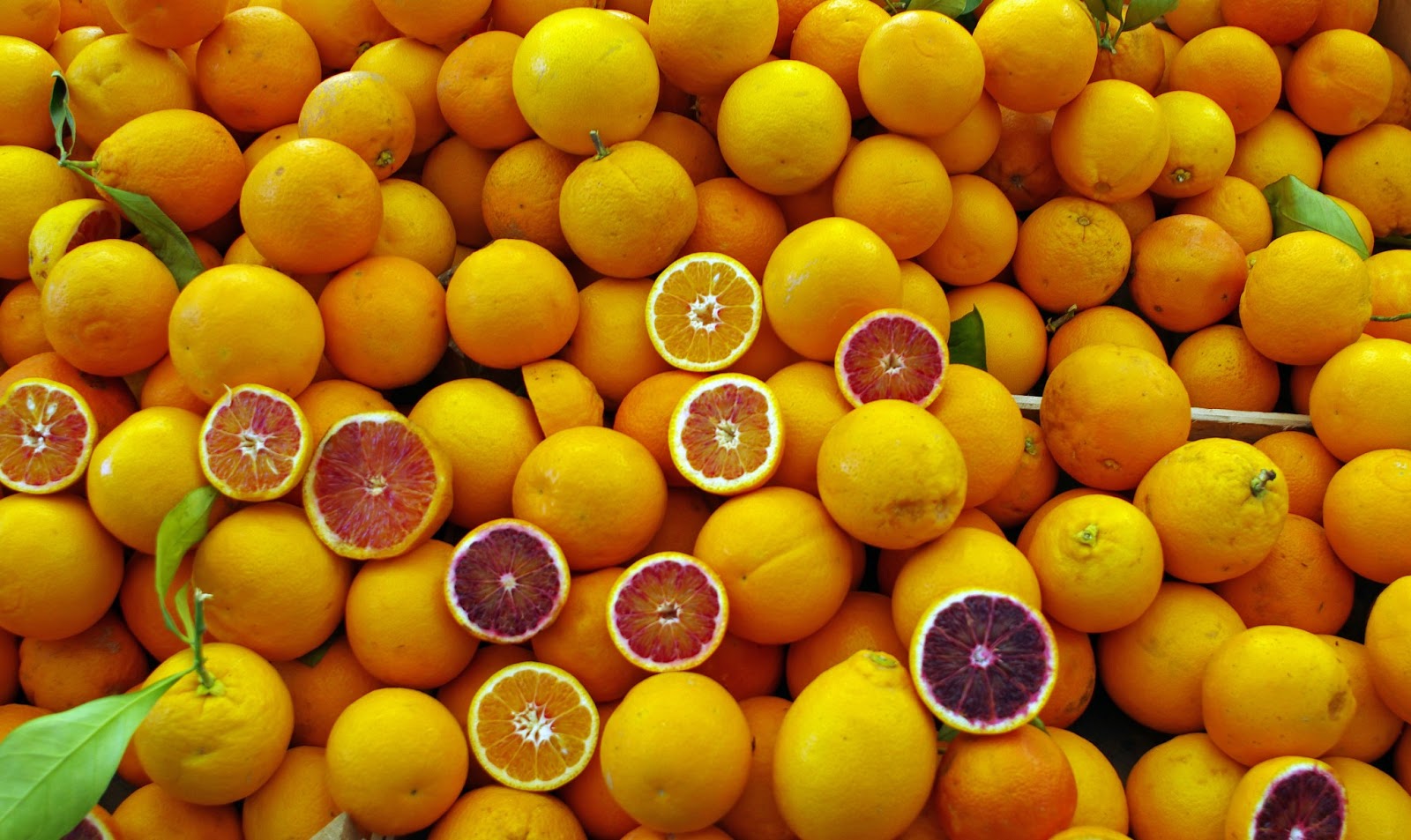 Then there are flowers.  As before, but this time with the violets and blacks of orchids.


Our last stop on this tour was Siracusa, or rather Ortigia.  I had been here before, but it has been cleaned up, and I was struck how bright the stone work was, how quiet the streets were without incessant traffic.  I still find echoes of Montalbano, as scenes have been filmed here, and now almost everything has some resonance, but it was not Montalbano who brought me here.  It was Camilleri.  His book, "Il Colore Del Sole" is an intricately crafted interpretation of the troubled times of Caravaggio in Malta and Sicily.  The church of Santa Lucia alla Badia has his "Sepoltura di Santa Lucia" as an altar piece (after years in restoration) and it is a strange but emotive piece - largely an empty canvas and with the little saint laid along the edge of her grave.  Camilleri recreates the world of intrigue and deception that surrounded Caravaggio with the chiaroscuro that it deserves, and it lends another layer to our exploration of this part of the world.

Another reason brought me to Ortigia.  I wanted lunch in a trattoria, just to sit in the sunny shades of a small piazza and taste the sea, rinsed with Grillo.  And so I make my way to the Taberna Sveva, a few steps, but a world apart, from the tourist crush near the Fonte Aretusa.  Here, with all the time in the world, we dine on the sweetest melanzana alla parmigiana, tagliolini con alici freschi, pomodorini e pepe rosso, and a grilliata mista di pesci.

The day is clear blue and gold, and it is a pleasure to sit and chat with Luca Zingaretti, aka Commissario Salvo Montalbano.  He is good company, and knowledgeable about Caravaggio, and although he is pressed for time, with Livia on his back about a sailing holiday, our trip to Sicily has made us firm friends and we are reluctant to part.   The Grillo, from Mandarossa, slips sleepily away, and the warmth of companionship glows. 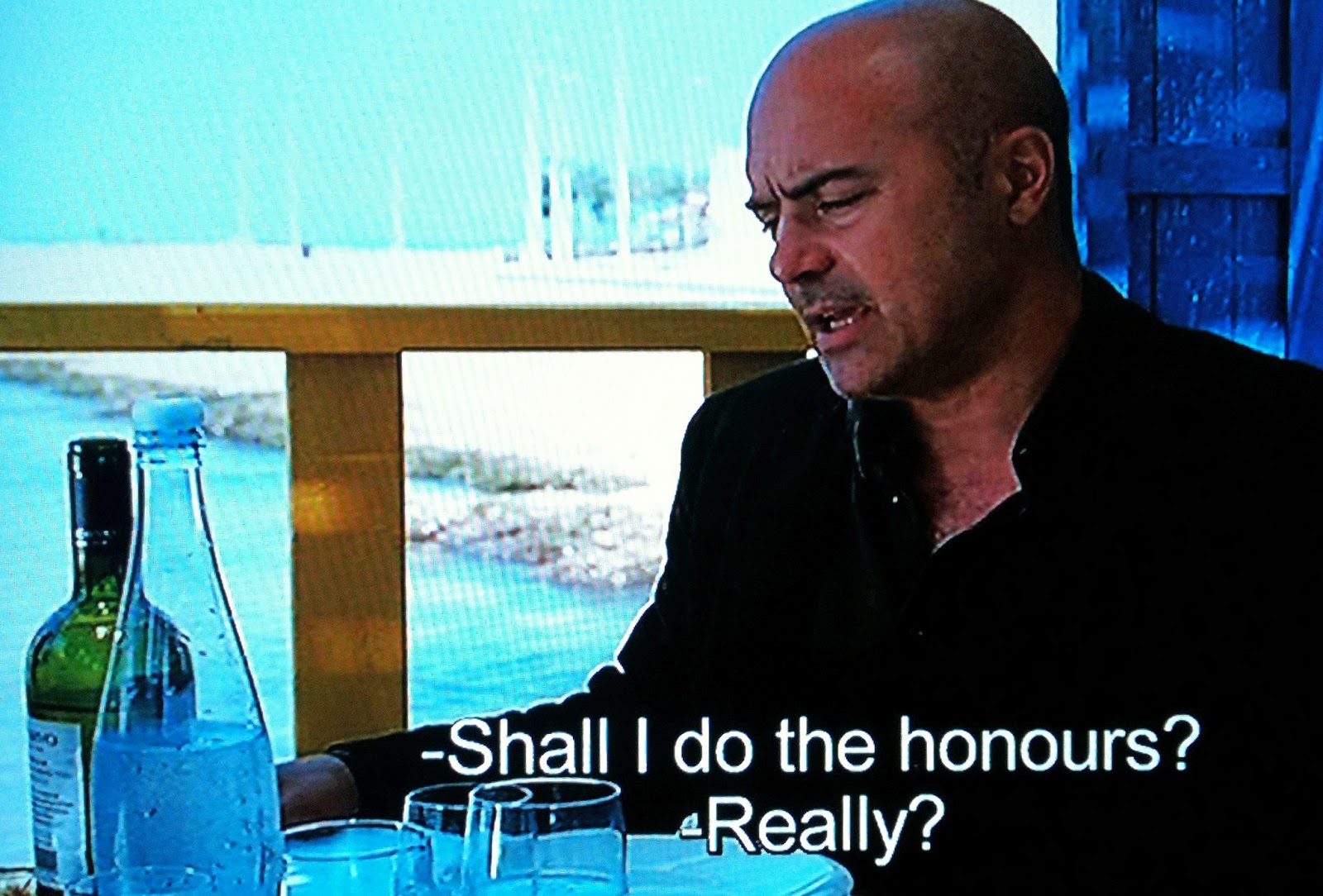