We came into Sicily at dusk, pretty much at sea level, skidding to a halt within sight of the city of Catania, the sea and the looming shape in the clouds that is Monte Etna, the highest volcano in Europe and one of the most active in the world. It was just possible to make out the shape of the summit in the fading light and gathering clouds, before the evening slipped away and night fell.  There was something awesome about it even in its indistinction. Though I had seen it on a number of occasions before, from different angles, including the air, this time it was serious - we were going up.

The first part of the journey was probably the most difficult;  it was completely dark by the time we had found our way out of the car park and onto the Tangenziale and then we had to fight through the suburban traffic, negotiate a maze of minor roads and narrow streets and identify a B & B I had booked at Nicolosi, which, at 698 metres above sea level, was to be base camp.  The B & B, Sotto il Vulcano, was just right, and overlooked Monte Rossi, a tree clad cone formed in the catastrophic 1669 eruption. Our hosts, Salvo and Antonella, made us welcome, and in the morning, after fortifying us with a stunning breakfast of local produce, they advised us on our ascent.

We were hopeful that it would be a clear day, and although disappointed that the eruption of a couple of weeks passed had subsided, there was still enough smoke and steam visible to reassure me that the monster had not died.  Blue skies promised good visibility, and relative volcanic calm suggested that we would not be hit by flying bombs or pyroclasts (accidental lithics), as killed nine trekkers in 1979.


So we drove up A Muntagna as Sicilians call her, winding up the road from Nicolosi into the Parco Regionale. Although there was a mixture of vegetation, from cultivated fields to vibrant floral displays of Etna Broom and Ragwort, Milk Vetch and Juniper by the roadside, from vineyards to stands of Calabrian pine and chestnut and orchards of citrus and pistachio trees, much of the ground is black, dry, brittle, barren lava.


At 1910 metres, at Rifugio Sapienza, there is a settlement of hotels, eating places and souvenir shops and the foot of the cable car which sways you vertiginously up to a bar at 2500 metres.  It is here that you notice the cold.  Boots and jackets are for hire, if you came unprepared, and hot drinks revive the unwary.  It is thick with snow, too, and has been much of the way up the cable ride. 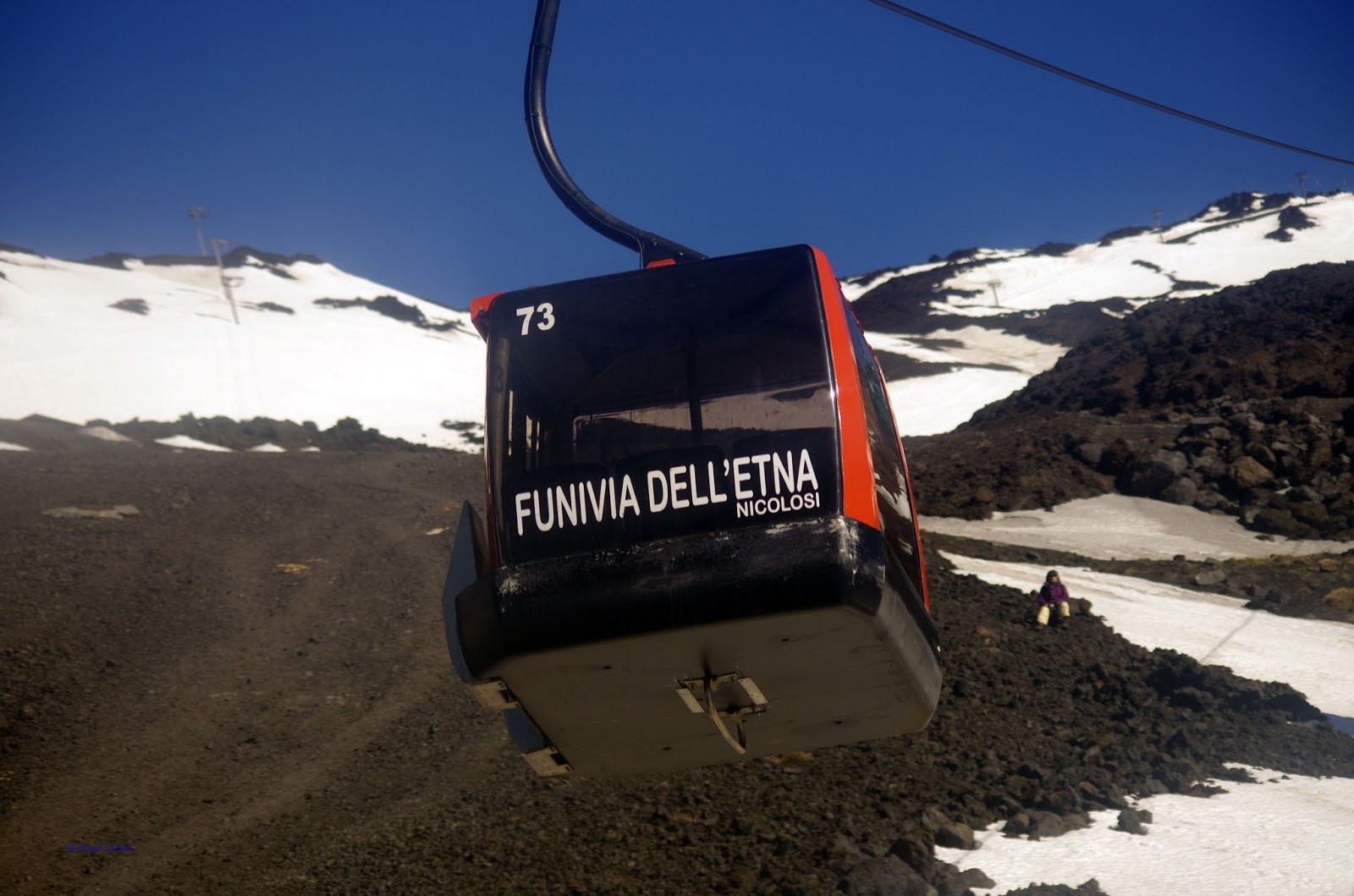 While it is possible to hire an expert alpine guide to trek on foot from the terminus, there are still 850 metres to climb and in deep snow and biting winds this is not the best season for such exertion.  We therefore catch the bus, a Mercedes Minibus with chains on the tyres, which in our case is full of jovial middle aged Germans. It is a bumpy ride, through ice canyons and over frozen lava, with views back across an azure sea and ahead to a belching crown. 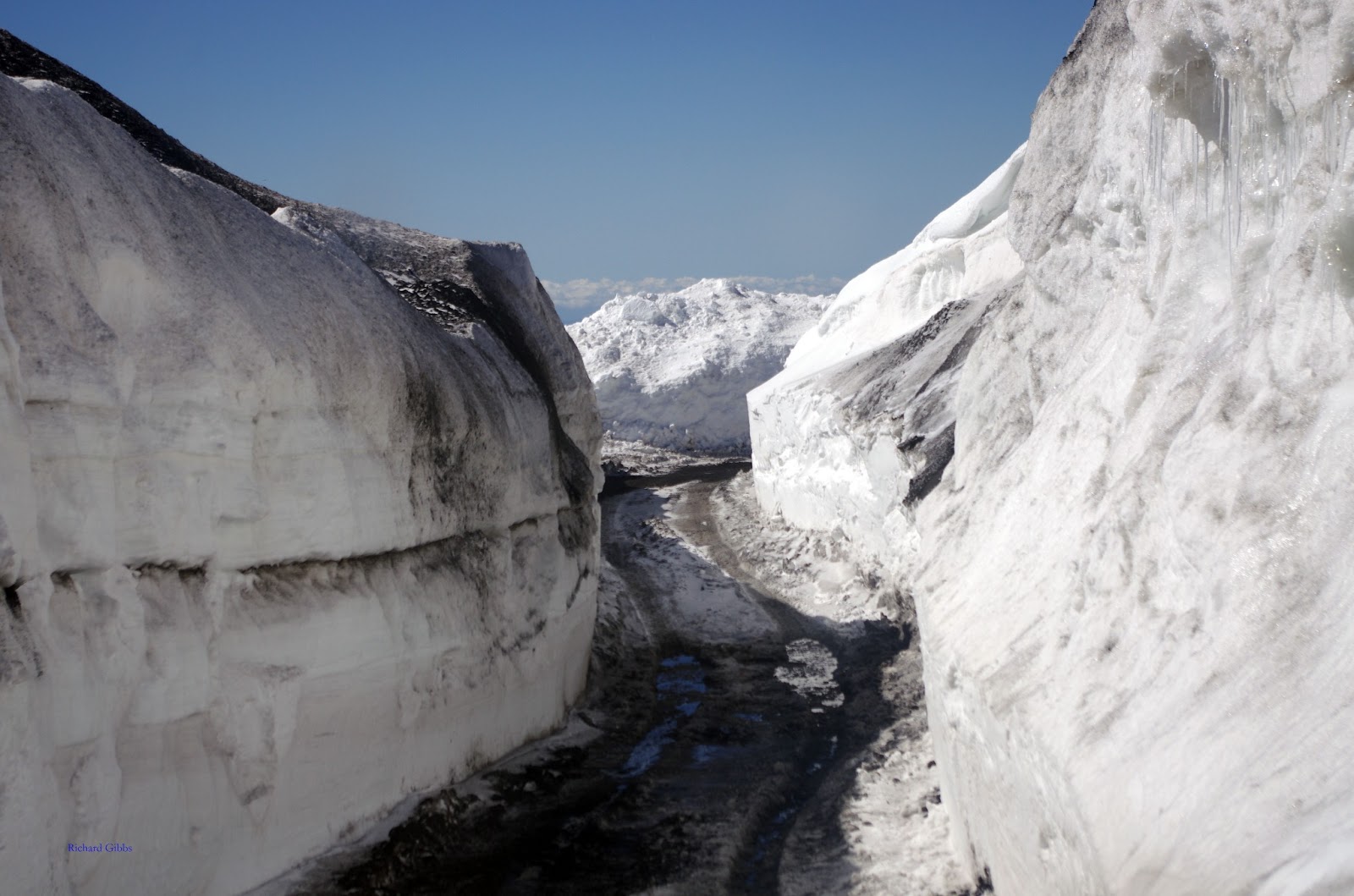 The comfort of the vehicles comes to a stop at the Torre di Empedocle, so called because there is an ancient construction here, now buried in the lava and sublimates, where the philosopher Empedocles was said to live and study in the fifth century BC.  He was a native of Agrigento and the last Greek Philosopher to record his works in verse.  Matthew Arnold, in 1852, paid tribute to his mythological death in his  dramatic poem, Empedocles on Etna,

The myth is strange, as Empedocles was fascinated by the volcano and is said to have believed that the upthrusting gases from the crater could support his body.  No Icarus he, however, and as his experiment failed he was consumed in the fiery flames of Etna's uncompromising throat. 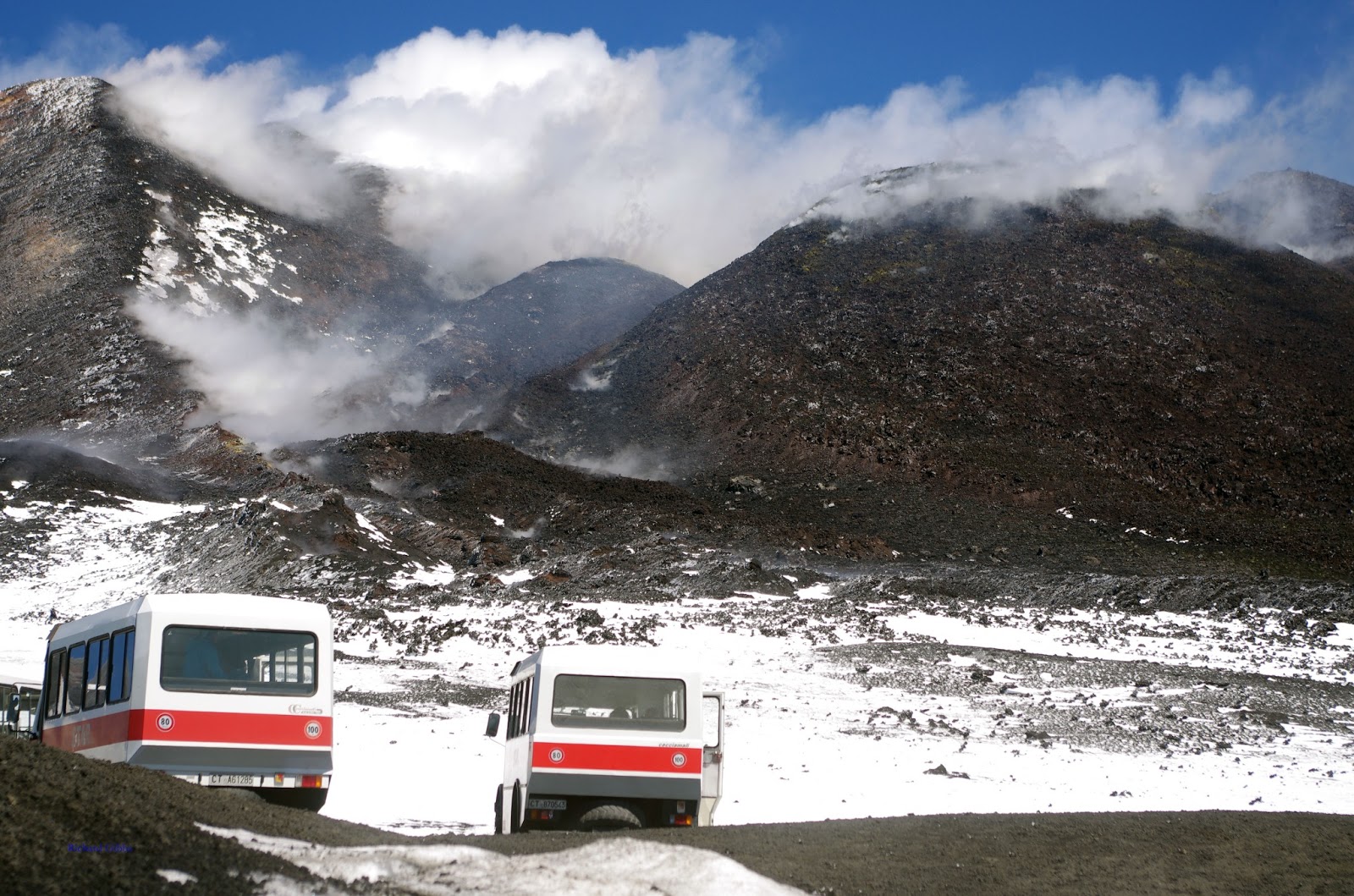 As we disembark from our bus, the wind bites like an icy weasel, sharp needle teeth striking any exposed flesh.  We are about three hundred metres below the summit, though summit and crater give a misleading idea. This is not a simple cone, with a neat hole in the top.  It is raw, and diverse, and many fissures opened to release the magma and then have sealed over.  Jagged edges, clefts and uneven strands of lava, covered in snow and then moulded by the winds, make the terrain treacherous, and the Prefect of Catania decrees how close visitors may approach - a disappointment from a bureaucrat, but one that cannot be condemned for carelessness. 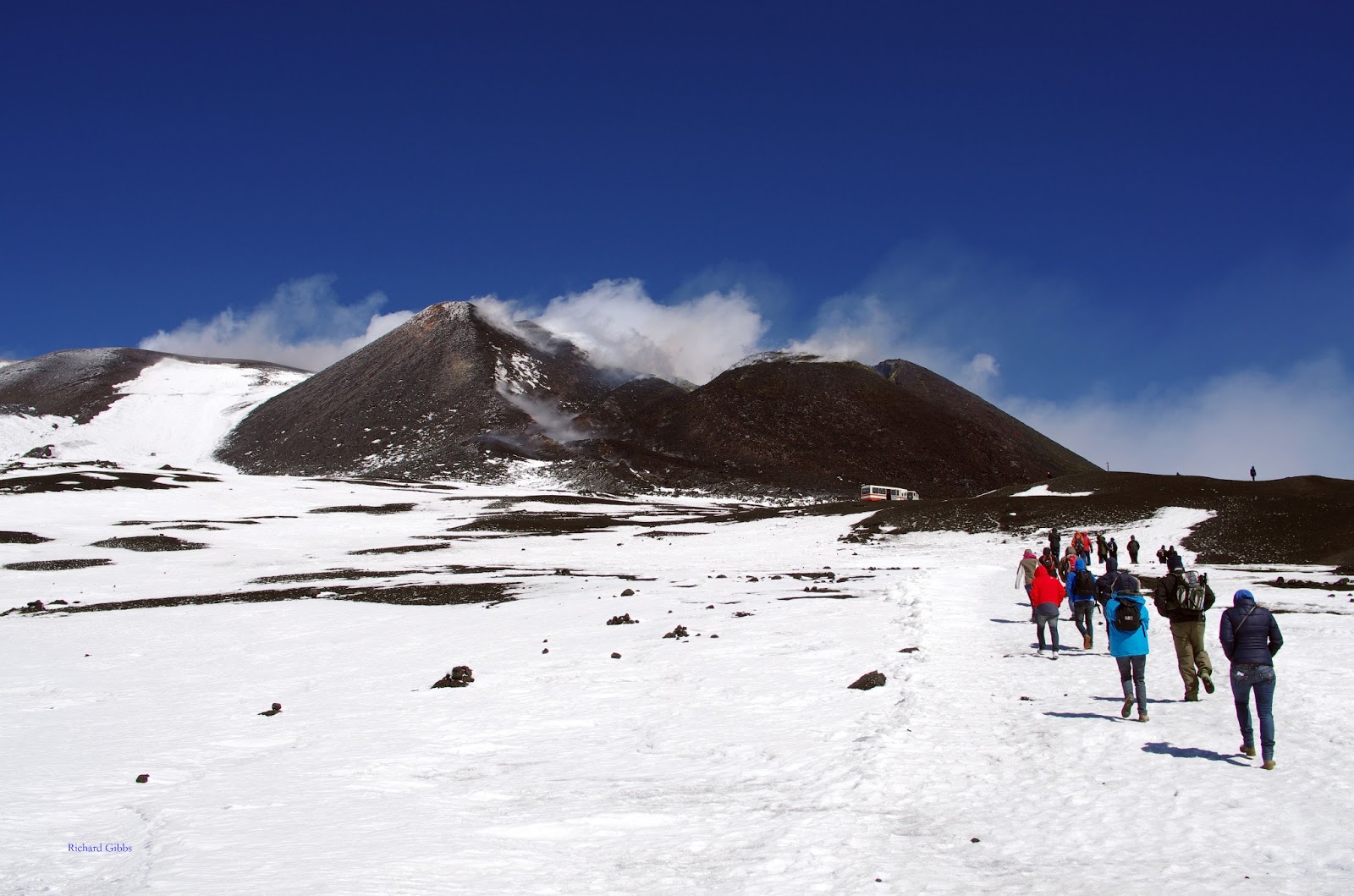 We are guided around the scene.  Led to see the views, told about how reliable this old volcano is, and instructed about incoherent materials and volatile products.  It's an extraordinary world, over twice as high as the highest point in the British Isles, under a burning sun, but scarred by a scouring wind. 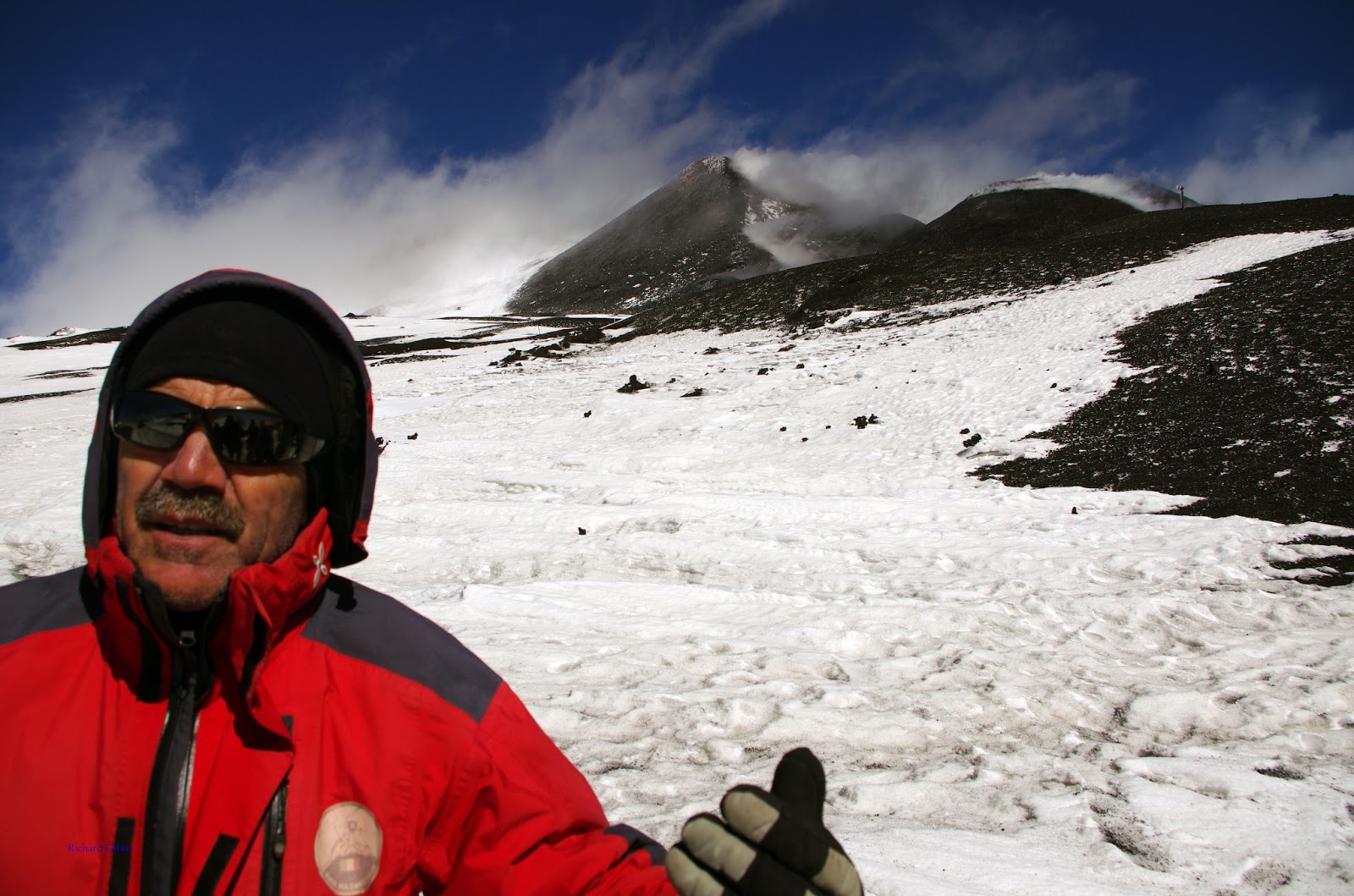 It is amazing how many craters there are. Silent, apart from the whipping winds, and crumbly with a frozen black breakfast cereal underfoot.  It is wonderful to gaze through watering eyes down to the green valleys and blue sea far below, but extraordinarily close. It is tempting to think that Empedocles should have experimented with diving into the driving wind, to swoop kite like down to Bronte, or Adamo.

The great Mount Etna covers approximately 1250 square kilometres.  A 140 kilometre road, and a railway, circumnavigate the massif.  Small towns crowd up the slopes, in defiance of the power of the boiling rocks below the surface.  A day after we withdrew from Nicolosi the beast awoke again, blasting fire and dust into the atmosphere.  The Mayors of Nicolosi and nearby Zafferana Etnea pleaded for recognition of a disaster as their communal resources were pitted against a deep covering of black ashes that weighed down roofs and choked the streets.

I guess it is the unpredictability that must be part of the attraction.  This will be no consolation to the frustrated councils that surround the mountain, but it is justifiably one of the greatest tourist attractions in not just Sicily but all of Italy.  Having seen it from afar, and from above, and now having set foot on the giant's shoulders, I sing its praise; I worship at the altar of Vulcan. 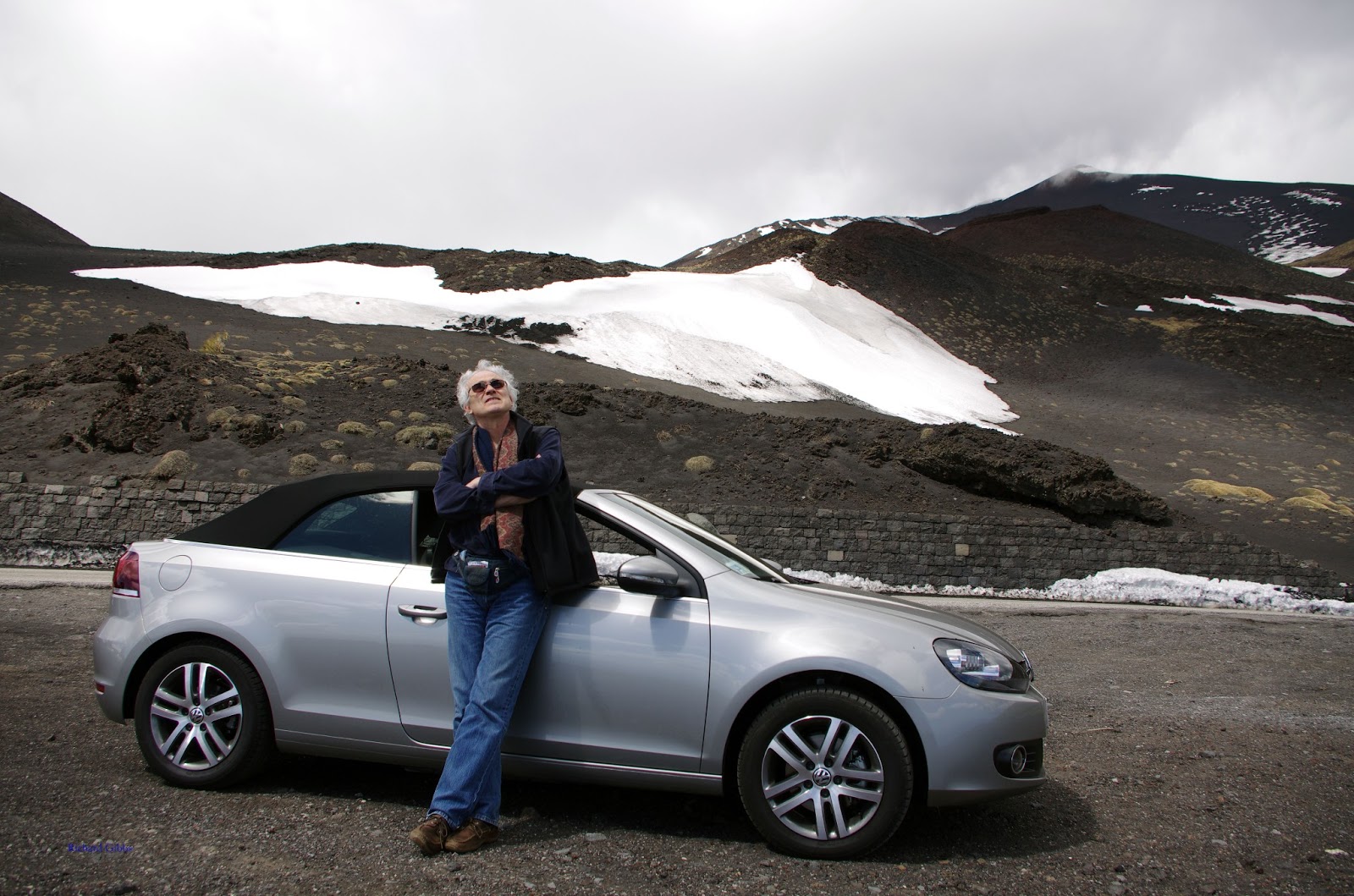