Land of Hawks and Sparrows


We drive away from Etna, though cannot shed her looming shape from our mirrors.  The landscape rolls open and floral, as if we are wandering across wallpaper. A passage from the essential Sicilian novel, Il Gattopardo comes to mind:  L'aspetto di un'aridita ondulante all'infinito, in groppe sopra groppe, sconfortate e irrazionali delle quali la mente non poteva afferare le linee principali, concepite in una fase delirante della creazione; un mare che si fosse pietrificato in un attimo in cui un cambiamento di vento avesse reso dementi le onde. Or, as Archibald Colquhoun translated the last phrase: a sea suddenly petrified when a change of wind had flung the waves into a frenzy. Ancient uninhibited fertility abounds at this time of year, so different from the scorched fields of summer or the wet cold of winter. 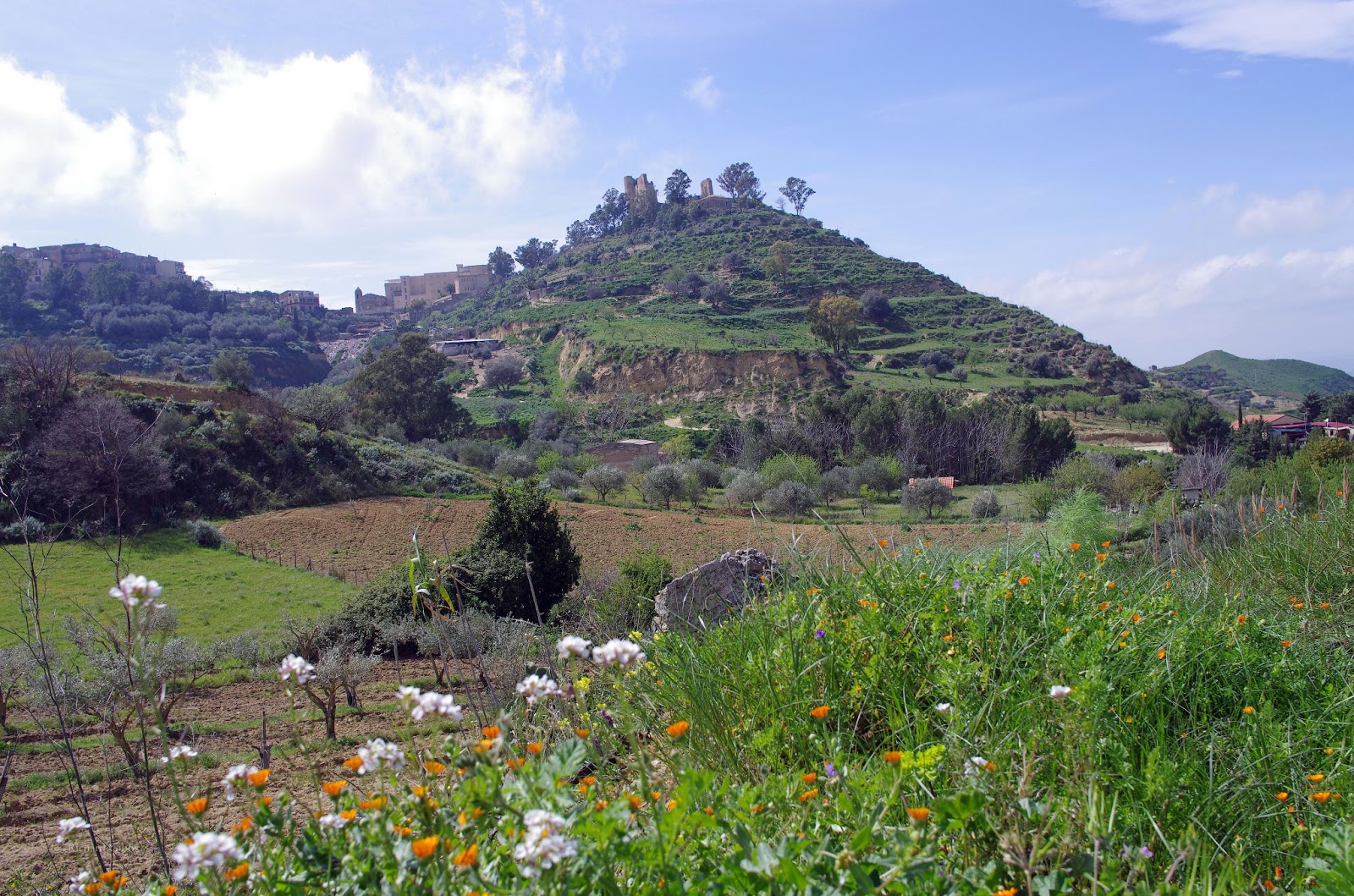 It is strangely quiet.  There are occasional vehicles but most are parked in impossible corners of towns, as if the possession of a parking space is more precious than any need for transport.  Our modest machine, incidentally the only Golf 1.6TD Cabriolet on the island, is perfect at curving and shifting and breezing and making the most of the extraordinary curls of stilted motorways and the steep narrow lanes of baroque town centres.  Everywhere we go we are waved and tooted at as being eccentric foreign visitors.  We are like exotic birds that have been blown off course. 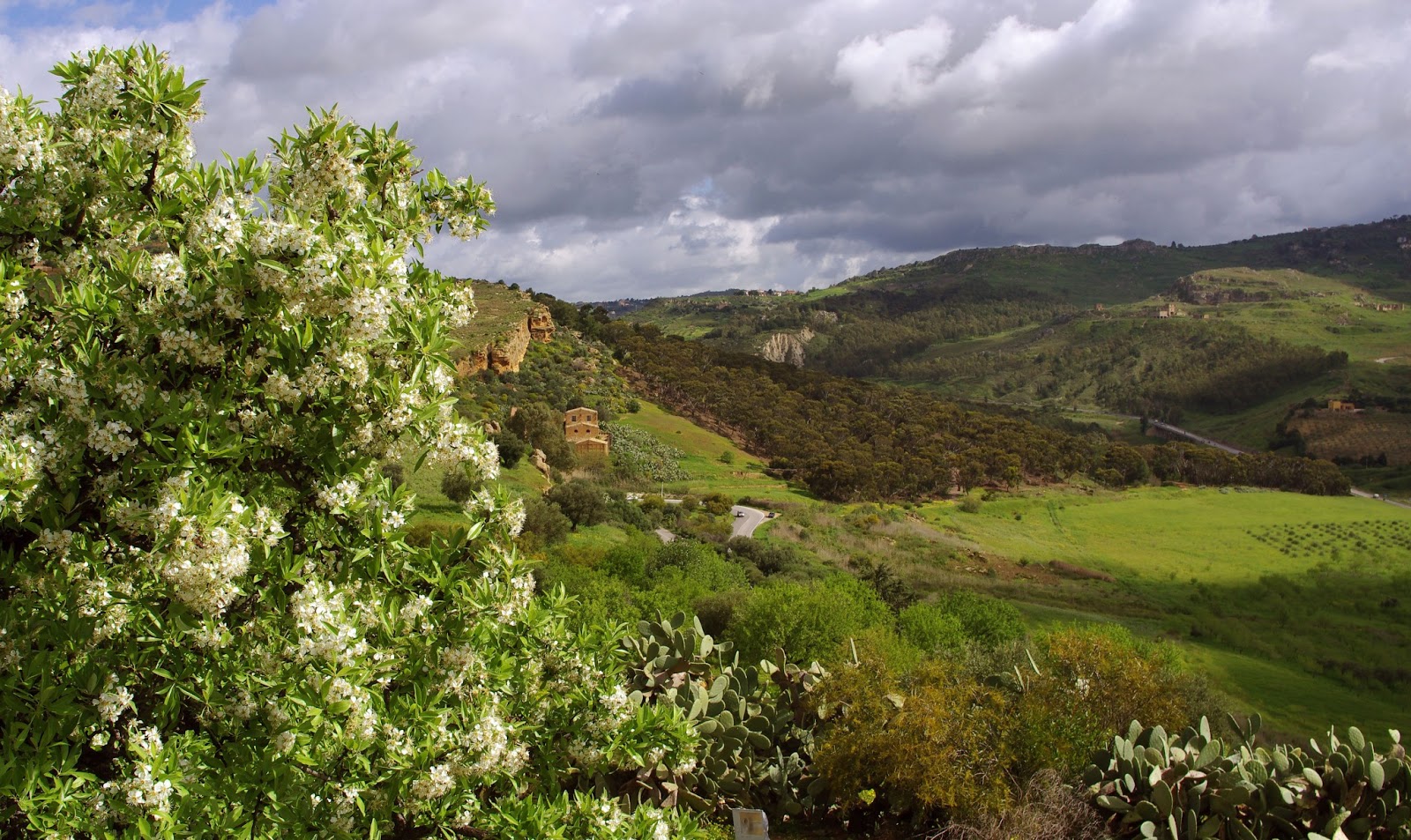 And then we reach the coast, the southern face of the island, and there is no one there.  We are screamed at by swifts and croaked at by jackdaws nesting on the cliffs but no one else is around.  I park the car and draw my name in the sand with a stick.  The waters sparkle turquoise and azure, the rocks lie tanning themselves, like beached seals, the struts of incomplete buildings stand like bleached skeletons, pecked clean by vultures. A memorial to the 1943 landings reminds me that others have been here before, but no one else appears. 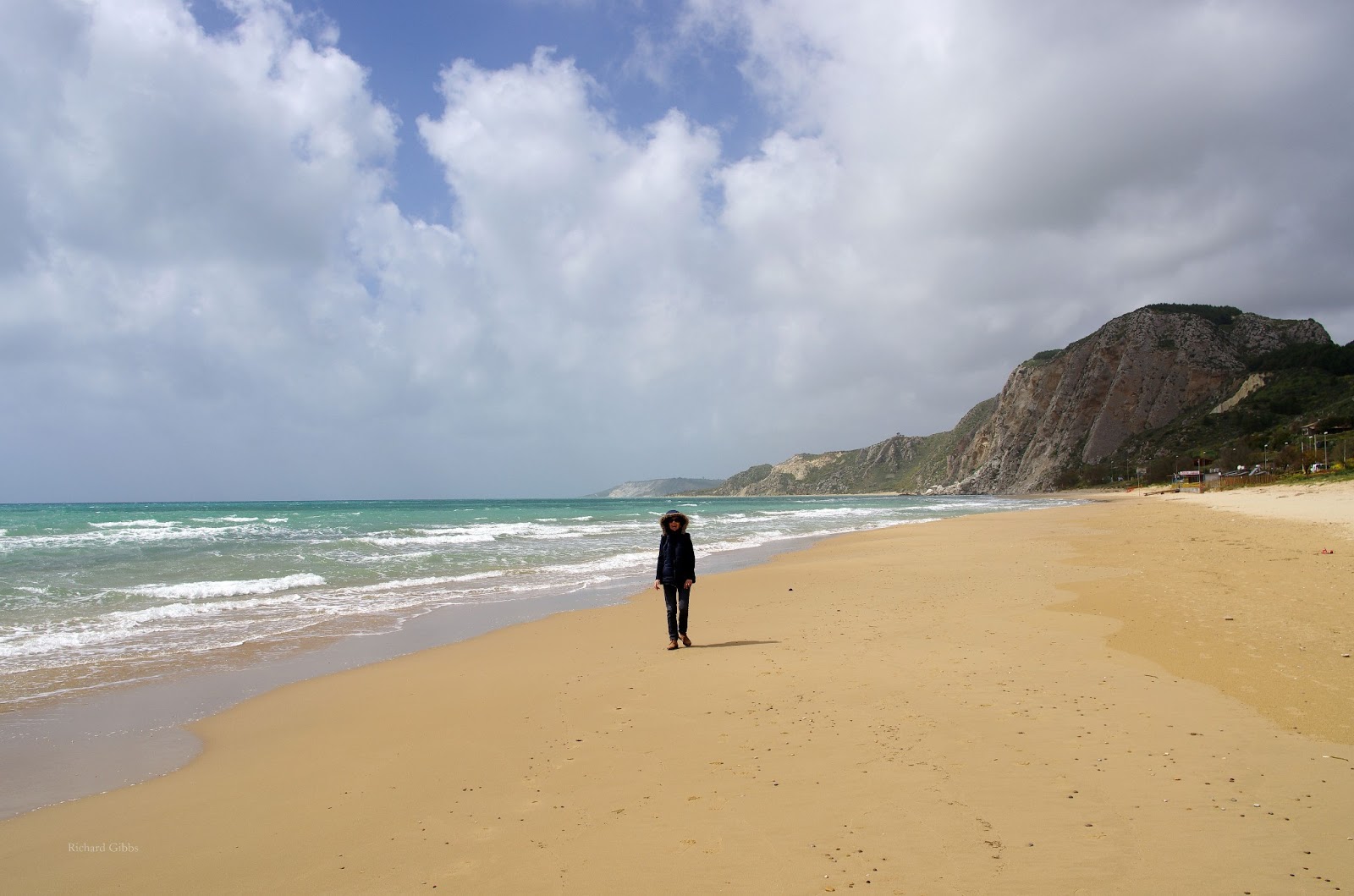 But it wasn't the 1943 landings that created Sicily, even though it may have legitimised the mafia.  There is another line from Il Gattopardo which refers to the waves of invaders in the past:  The macchia which clings to the hillsides maintains the same tangle of aromas which the Phoenicians,  the Dorians and the Ionians found when they landed in Sicily, that America of the past.


The Greeks came here about five hundred years before Christ was born.  That 'America of the past,' such a telling phrase, was fertile, wooded, available, and uncluttered.  Greece, pestered by Middle Eastern forces, was more populous and less arable.  No wonder that the New World became popular, and the colonies became powerful.   And no wonder that the potentates, such as tyrant Terone (488 - 473 BC), raised such impressive monuments as these temples at Akragas.

Nothing lasts forever, however, and in 406 BC the city was sacked and burnt by the Carthaginians.  Two hundred years later it became Agrigentum, under the Romans, and then, after the decline of the empire, it came under Bizantine rule, and then Arab, then Norman, then Spanish, and then Italian. Nothing here is Sicilian (if you avert your eyes from the crude and suspect concrete erections of the twentieth century).  Or, paradoxically, everything here is Sicilian, as in a certain sense all who land here are ensnared by the sirens or by the cyclops or simply by the climate and food and wine, and so become a part of the culture and the world of Sicily. But that world has always been divided, between Lords and serfs, or Hawks and Sparrows.  The rulers had left their mark in the great buildings, the extravagance and permanence of the powerful.  The serfs have left their mark, as they still do, in the stone walls and olive trees, the carobs and the sheep that are so characteristic of the island.


The small town of Naro, thirty-five kilometres from Agrigento, shows this well.  Surmounting the top of the hill, dominating the settlement and the valleys around, is the tightly sealed and impregnable nest of the hawkish landlords, the thirteenth century Castello del Chiaramonte, with cylindrical towers and square keep.  But then in the narrow lanes around there are the dilapidated and in some cases abandoned dwellings of the sparrows.


I was asked the other day if I met any Mafiosi in Sicily. The answer is probably, yes, though it is not that they wear a badge. Like many fraternities, like the masons, they may have their secret signs and handshakes, but they do not necessarily advertise their allegiance. According to authorities, such as Norman Lewis, Cosa Nostra is a relatively new feature of Sicilian life (the word "mafia" was first recorded in 1668, but "mafiosi" did not appear until after Garibaldi coined it in 1861), but is also one that has changed radically in the last half century since the US deal with powerful Sicilian bosses in 1943 which helped liberate the island from German occupation, but which indirectly led to the world of drug trafficking.

The tradition of a mafia, however, was described by Tomasso Buscetta, the first and most famous of the Pentiti, [Repentents] in November 1992. Ognuno, ogni mafioso, ha una Famiglia numerosissima, e questa Famiglia ha altre Famiglie.....  Each individual, each mafioso, has a very large family, and that family has other family..... It is connection.....

I am not defending anything here; the many murders associated with the mafia, the drug dealing, the appallingly wasteful and disfiguring construction contracts, the political intrigue - the mafia is a criminal organisation and its leaders' talons are deeply stained with the blood of others.  The hawks bite the heads off sparrows. 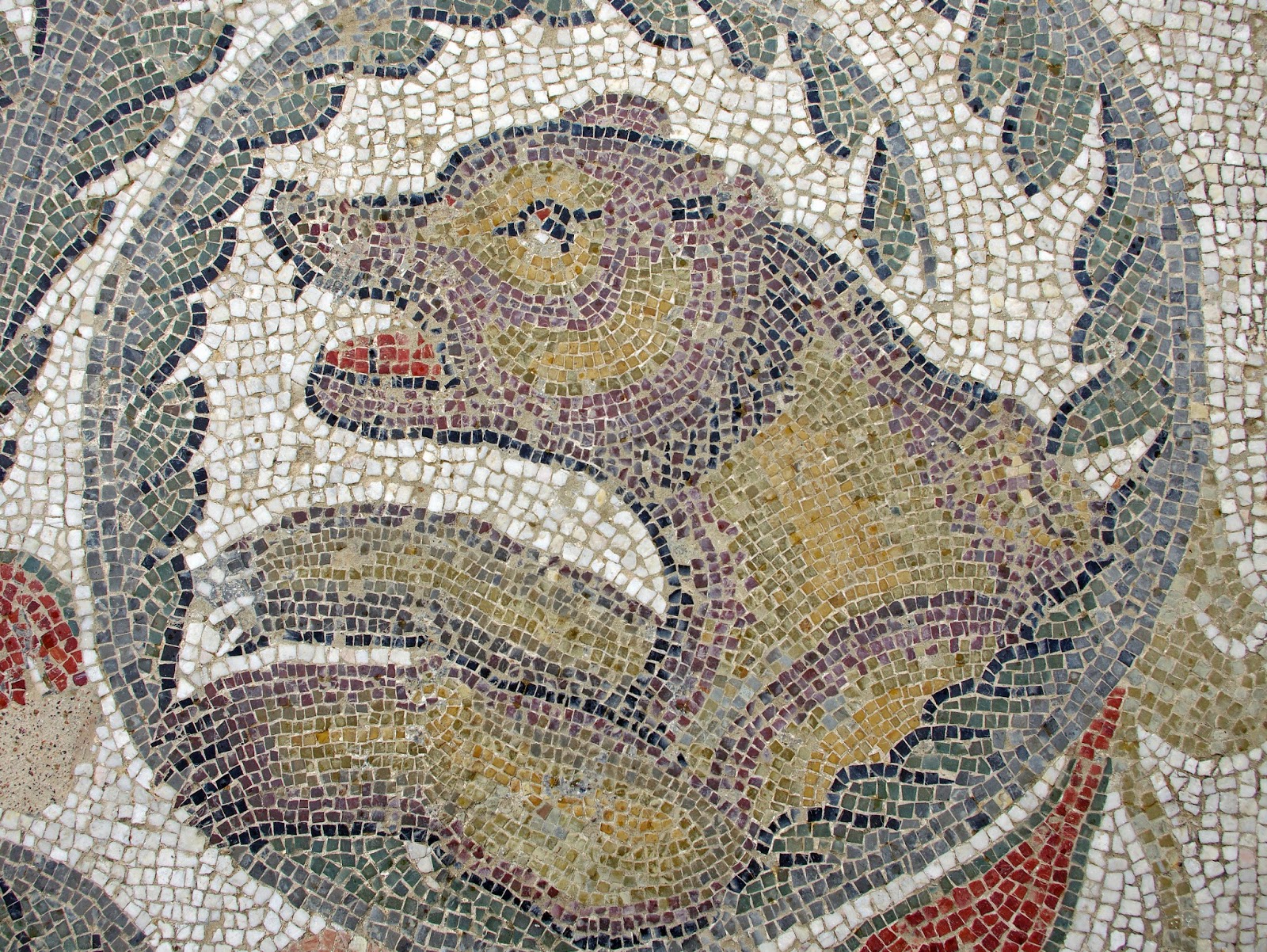 It is difficult to read about Sicily without reading about the Mafia.  Mary Taylor Simeti's book, On Persephone's Island, essentially a journal of family life with much about the seasons and agriculture, refers to threatening phone calls, exploding gas cylinders, a residual fear that nothing is absolutely secure which imbues existence with a particular paranoia.  Shortly before his death, at the hands of the Mafia, Giovanni Falcone, Director of Penal Division in the Ministry of Justice, said this in an interview:  Solitude, pessimism, death are the themes of our literature from Pirandello to Sciascia. It is as if we were people who have lived too long and all of a sudden feel tired, drained, emptied, like Don Fabrizio in Tomasi di Lampedusa [The Leopard]. Affinities between and the Mafia are many.  His point was that the Mafia was the "culture of death," and that this was  applicable to all things Sicilian.

In The Mafia in Sicilian Literature, (New Academia Publishing, 2008) Corinna del Greco Lobner refers to Leonardo Sciascia's choice of, writers who have unveiled the secrets of the Sicilian people. There are several but Verga, Pirandello, Tomasi di Lampedusa dominate his choice. What Sciascia is suggesting is that in order to find out what the Mafia is really like readers must go to Sicilian literature. It is here that they will discover the importance of Mafioso behaviour that animates characters and situations as presented by Sicilian writers.


In a further paragraph, del Greco Lobner explains how complex and insidious the Mafia really is: the 1987 Palermo maxi-trial of 465 indicted Mafiosi delivered 342 convictions with sentences adding to a total of 2655 years in prison, not including the nineteen life terms adjudged to members of the cupola. It was not long, however, before business as usual resumed.  As recently as August 2003 the Italian government admitted the impossibility of eliminating the Mafia from the national scene and suggested some form of convivenza [cohabitation] to ease the tension and stabilize the situation which notes the ability of the Mafia’s adjustments to changing social and economic conditions (a factor constantly present in Sicilian literature), mix with ordinary people without creating specific problems for the Mafiosi, rely on intimidation and violence, and be faithful to oneself regardless of the circumstances. In short, to be and to remain la stessa cosa [the same thing] at all times. Even if frustrated, Italians have kept their sense of humor. They call Cosa Nostra – Casa Nostra (Our House).

And our house for a day or two is a restored masseria [farm] where the charming Santo Schembri and his wife look after us with meticulous care.  It may be something of a contradiction in the light of the above, but there is more to Sicily than the Mafia.  There is Nero d'avola, for example, a smooth red wine which goes perfectly with spicy sausages and fresh vegetables.  There is the scent of crushed fennel from the roadside verges; the sight of peach blossom in ranked orchards; wild flowers abound everywhere; bee eaters, swallows, swifts, peregrine falcons, booted eagles score the sky; magpies and hooded crows scour the fields.


And everywhere there are churches, often ornately baroque, with their revered saints and images within. Padre Pio is popular, but the Virgin Mary is omnipresent, receiving gifts and granting peace of mind to the faithful from innumerable shrines and chapels.


It is curious that this statue (above) is blonde, as this is not the natural Sicilian tint. Coincidentally certain other young women in Sicilian art are blonde as well.  In the magnificent Villa Romana del Casale at Piazza Armerina (constructed in the 3rd to 4th centuries AD) the mosaic floors tell of hunting, shooting and fishing, in grandiose style.  Pass-times as popular then as they were for Il Gattopardo, Don Fabrizio, in 1861.  There are beautiful geometric designs, pictures of beasts, gods, heroes and daily life and amongst the most delightful are those of a series of bikini clad ladies in the gym, toning themselves up and counteracting the effects of grand feasts.  They have golden hair, but I wonder if they were natural blondes?  Perhaps they were Greeks? 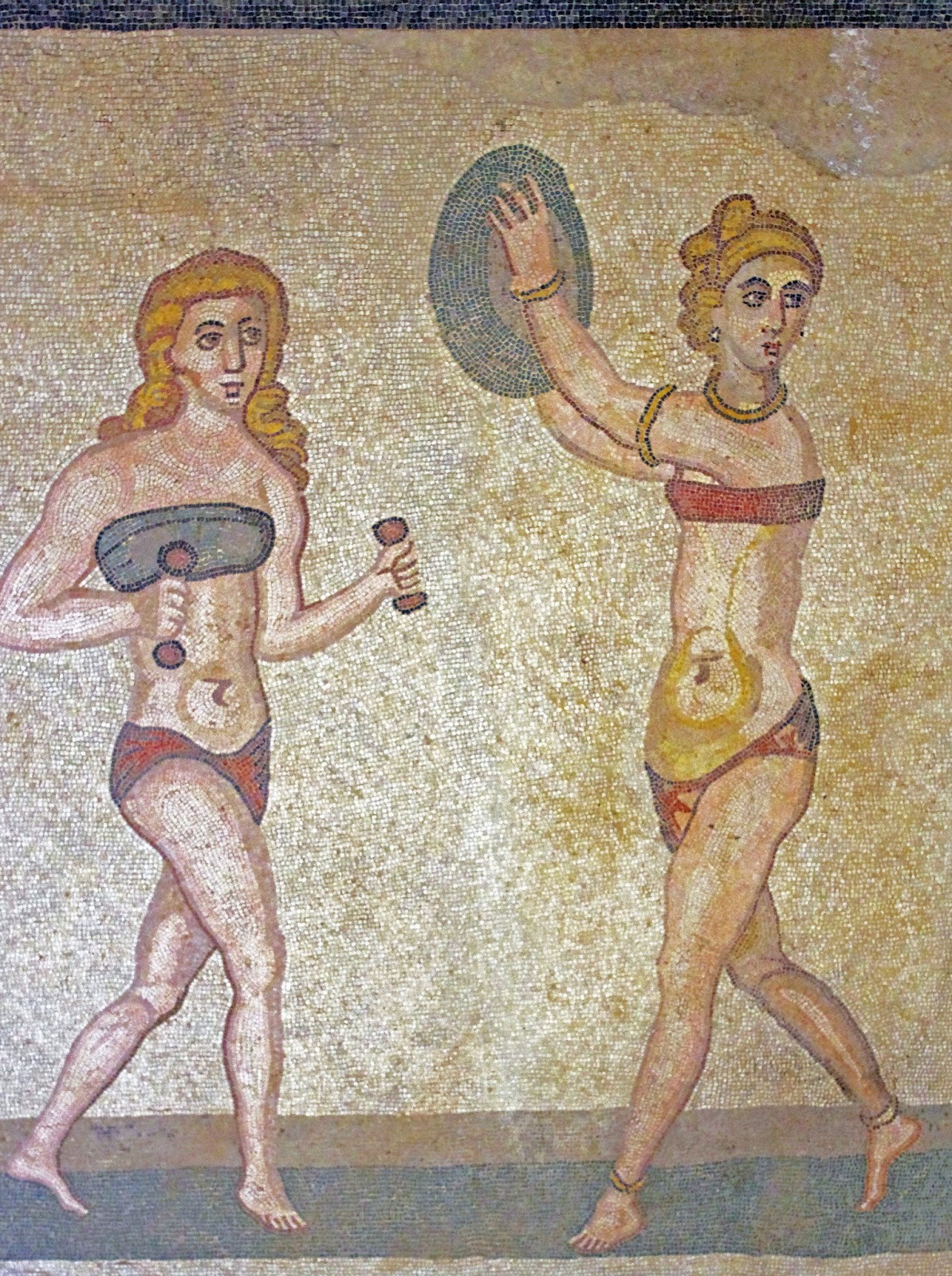 There is more to Sicily than the Mafia.  I may have met some Mafiosi, but we did not meet men with bloody hands, or witness the Lupara Bianca.  Yes we saw sparrows, and we saw hawks, but that is the way of the world, and to a certain extent we can co-exist.

Sicily has produced a fair share of art, in several forms, and for a relatively small island two Nobel Prize Winners for Literature is not bad going. In 1934 it was the turn of Luigi Pirandello, author of The Late Mathias Pascal, Six Characters in search of an Author, and Henry IV, among other works. He was born and lived near Agrigento and was one of the twentieth century's greatest dramatists.

In 1959 Salvatore Quasimodo, another native Sicilian, was also awarded the Nobel Prize for Literature. The citation said that it was, for his poetry which with classical fire expresses the tragic experience of life in our time.

The wind is still there that I remember
kindling the manes of horses coursing
oblique among the plains; a wind
that stains and gnaws the sandstone and the heart
of the doleful telamons lying
felled on the grass.
Ancient soul grey with bitterness
you return with the wind, sniff
the delicate moss that clothes
the giants thrust down from the sky.....

There is more to Sicily than the mafia.  Even sparrows can be beautiful.....

Luigi Pirandello:  "Six characters in search of an author." 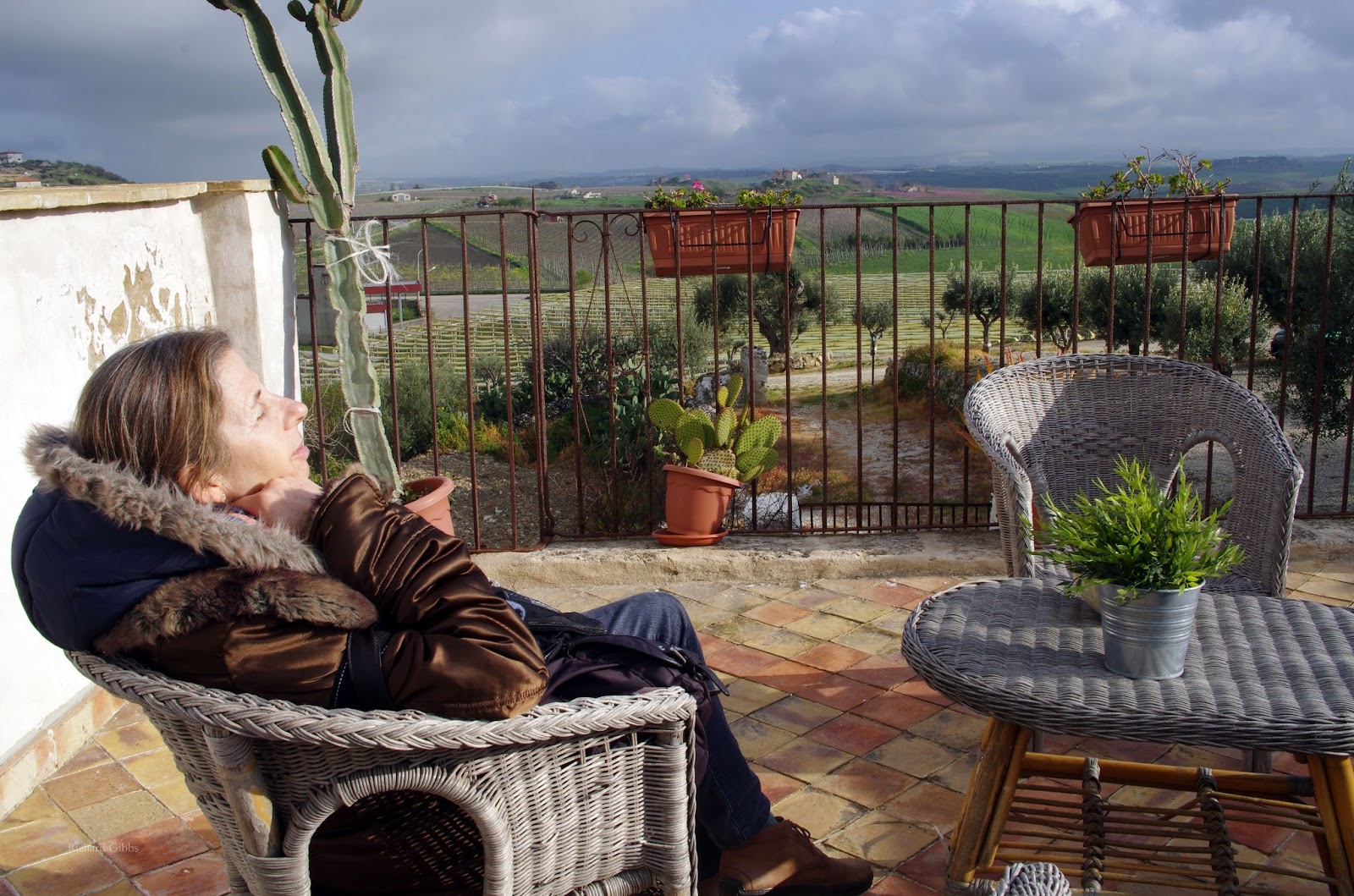