John Masefield, who was Poet Laureate for 37 years until his death in 1967, is possibly best known for his poem "Sea Fever," which was first published in "Salt-Water Ballads" in 1902.

"I must go down to the seas again, to the lonely sea and the sky,


And all I ask is a tall ship and a star to steer her by;
And the wheel’s kick and the wind’s song and the white sail’s shaking,
And a grey mist on the sea’s face, and a grey dawn breaking,...."

Just recently, after a very long spell on dry land (I have only marginally more experience of sailing than I do of Space Travel) I found myself boarding the 44 ft Bermuda rigged schooner Zephyr in Southampton. Skipper Marinos Pappas, originally from Athens, but for many years a Londoner, welcomed the crew aboard as we stowed our kit and the extraordinary volume of supplies we had brought for the weekend.


It is snug below decks, although I cannot imagine how snug it would be with a crew of twelve (as there will be for the Fastnet race in the summer) as there are only eight berths.

Early in the morning, after an attempt to reduce the sausage, egg and bean mountain in the galley, some attention to the masthead rigging is paid by Gavin in the bosun's chair.

Then,  after a team photo, wearing the fleece of the Old Berkhamstedian Sailing Club, we slip our moorings and head off into the Itchen and down to the Solent, avoiding the ferries, keeping clear of the enormous car transporter ships off-loading, and giving the container vessels a wide berth.

Masefield, who had been a seaman and knew the world of waves well, yearned for the wind to carry him along.

"I must go down to the seas again, for the call of the running tide
Is a wild call and a clear call that may not be denied;
And all I ask is a windy day with the white clouds flying,
And the flung spray and the blown spume, and the sea-gulls crying."

We certainly had some sea-gulls and, with the marvel of the Solent's multiple tides, we had plenty of running water, but we headed towards the open sea with only a faint wind, and very little flung spray or blown spume, yet at least.....

Keith took the helm, demonstrating an uncanny ability to multi-task with a cup of tea....

Gavin and Vicky approached aboard Becky, ably piloted by their daughter Mollie:

But the sea remained calm, and the wind was lack-lustre.  Admittedly I was somewhat relieved, as I had had misgivings about my ability to resist mal-de-mer, even though all those years ago, when I sailed on the 60 ft gaff-rigged Ketch Owl out of Tobermory, I had not suffered.  We had been escorted by Risso's dolphins, treated to views of Killer Whales leaping and Basking Sharks sifting past just below the surface, and it had all been so fascinating I never thought of queasiness.....

But the fresh air, the sensation of floating, the progress through the water, through the air, is exhilarating nonetheless, and when, after a light lunch of pork pies, cheese sandwiches, sausage rolls, cooked meats, chocolate biscuits, cups of tea etc (with no visible reduction in the food mountain) we turn our back on Cowes and bear West, to catch the wind, I am feeling great.

And now the wind picks up, the reefed mainsail is held close to the wind, the Genoa drives us as we tack, to the call of "Lee-Ho!" spinning the helm to turn the bows, the sheets slackened or winched to haul the sail.

As I read in E G Martin and John Irving's book, Cruising & Ocean Racing, "Turning to Windward, - This, despite the speed attractions of reaching, is undoubtedly the most exhilarating point of sailing, especially in a smart breeze.  The zig-zag, close-hauled sailing, first on one tack and then on the other, brings every instinct of seamanship into play to make the utmost advantage of every free puff of wind, to cheat the wind....."

I'm loving it, the pitch of the deck, the almost constant activity, the comparative silence of the motion as the vessel seems to be speeding without a motor.  The  crisp rustle of the sailcloth, the swooshing of the bows as they cleave the waves, and the gurgle of the wake as it boils away behind, all contribute to a feeling of other-worldliness; a peace of mind away from the daily grind.

With lungs full of wild air, eyes shaded against the reflected light, ears working overtime to balance, it's a brilliant afternoon.  I begin to feel the fever rise as the sea chuckles past; I don't want to stop; I want to sail and sail across the spinning ocean.

But then in another of my books (armchair sailing being something of a habit):  Heavy Weather Sailing by K. Alard Coles, I read of the 39 ft centreboard yawl Doubloon that was rolled 360 degrees, twice, on a voyage in the west Atlantic in 1964:  "About 0100 the following morning there was a tremendous crash.  The boat was slammed down on her side to port.  It seemed that she might have paused for an instant, but instead of coming back she went right over.  Her crew were all thrown to the port side, then on to the cabin ceiling.  Before they could think about it, they were back upright.  The complete 360-degree roll over was estimated to take only three to five seconds."

And in My Lively Lady, Sir Alec Rose, fruiterer and greengrocer of my native Southsea, describes in vivid detail his first Transatlantic Race: "2nd August (Noon) Lowering mainsail - waves clean over the yacht, wind shrieking.  (1300) The knife drawer slams shut, crushing and splitting my finger, makes me feel sick as I hold it in cold water.  (1400) Conditions worse, have to go to foredeck to lower storm jib.  Wind tearing and screeching at everything, heavy rain, waves over the ship.  Pretty perilous up in the bows - trying to get a madly flapping sail down - with the bows lifting 20 feet in the air, and you see a deep valley of water into which you are dropping....."

This is the stuff of heroes, or madmen.  I guess that for a committed sailor the extreme moods of the sea and the thrill of riding out a storm must be part of the appeal, however unappealing the experience may be at the time, but I feel it's not for me.

Though having said that, as we turn back towards the Isle of Wight and hoist the asymmetrical spinnaker to take full advantage of the wind, the fever increases.  As the blue cloth fills the boat picks up into a gallop from a trot, and we speed towards the east.  I understand the lure of the sea, the sense of Masefield's final stanza, with the charms of the vagrant gypsy life and the laughing fellow-rover.  It's a brilliant experience, and I want more.  I don't want for it to stop.

"I must go down to the seas again, to the vagrant gypsy life,
To the gull’s way and the whale’s way where the wind’s like a whetted knife;
And all I ask is a merry yarn from a laughing fellow-rover,
And quiet sleep and a sweet dream when the long trick’s over."


And then we are back in the Marina, off-loading the excess foodstuffs we never needed, munching loose pork pies to save them from the skip. We have had a fine taste of the sea, and I feel the fever has a hold on me. It's good to be ashore, but friendships have been forged, and lessons learnt, and as I return home, my main thought is,  "I must go down to the seas again...." 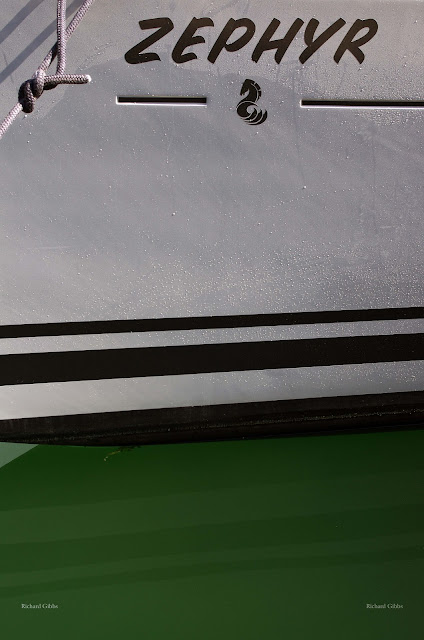