The other day I had reason to meet an Italian family from near La Spezia, and the father owned a quarry at Carrara, in the Apuan Alps. This was where Michelangelo Buonarroti chose his massive blocks for David, Moses, La Pieta, as the white marble was the best quality for working. 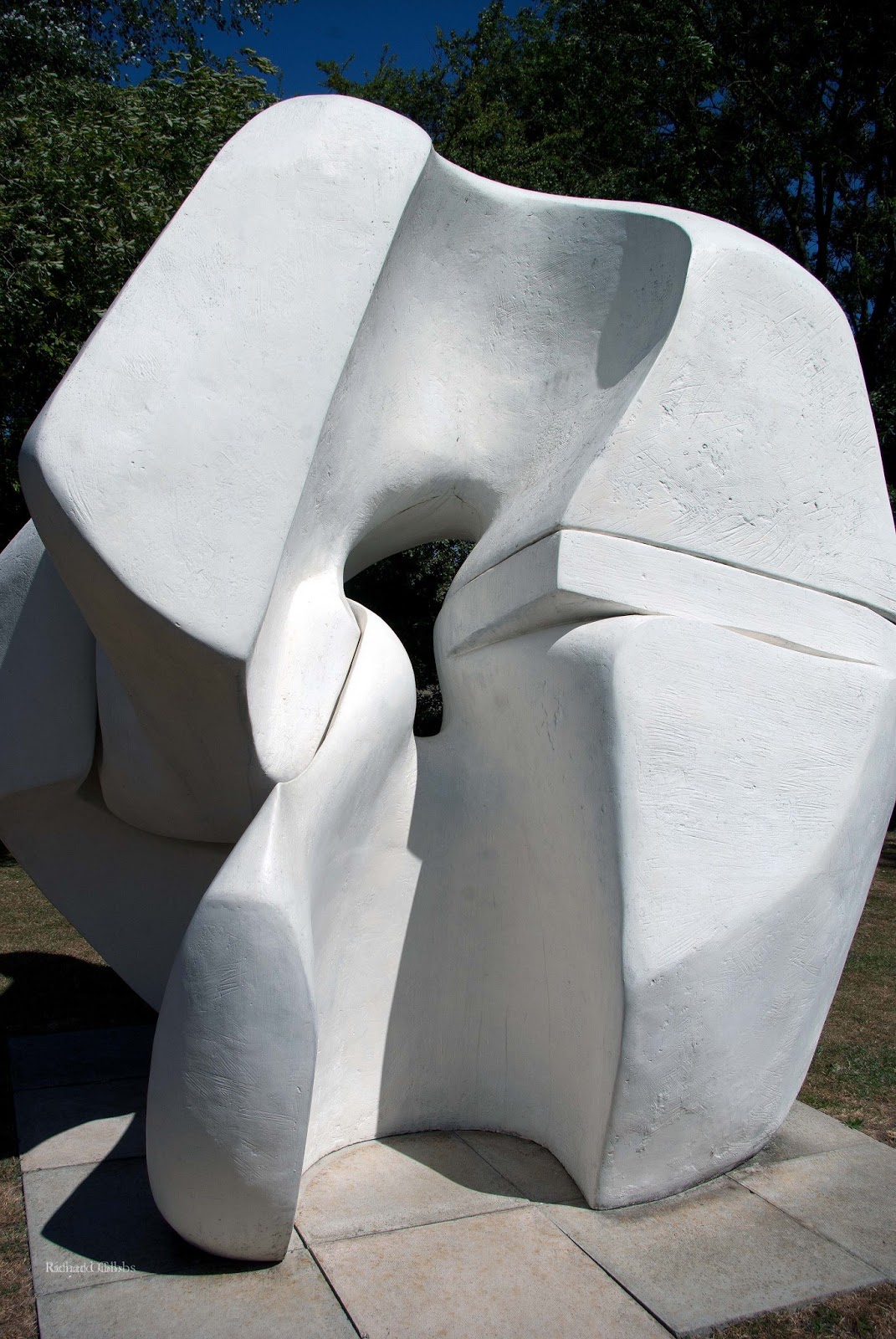 At nearby Forte dei Marmi, once the preferred resort of the Agnelli family, Thomas Mann, Aldous Huxley et al, Henry Moore had a house at 198 Via Civitali. Moore obtained his marble from and worked at the Henraux quarry in Querceta. The Henraux firm also own Altissimo, the quarry from which Michelangelo had obtained his stone.


Anyway, this rather tenuous link brought me back to a tiny hamlet in Hertfordshire, between Bishop's Stortford and Ware, a part of Much Hadham called Perry Green.

Henry Moore, the seventh of eight children,  was born in the coal-mining town of Castleford, Yorkshire, on 30 July 1898. At the age of eighteen he joined the 15th Battalion of The London Regiment. Not long afterwards he took part in the battle of Cambrai, but was gassed and hospitalised for several months. In 1924 Moore was appointed as sculpture instructor at the Royal College and here he met Irina Radetsky, a painting student at the college. 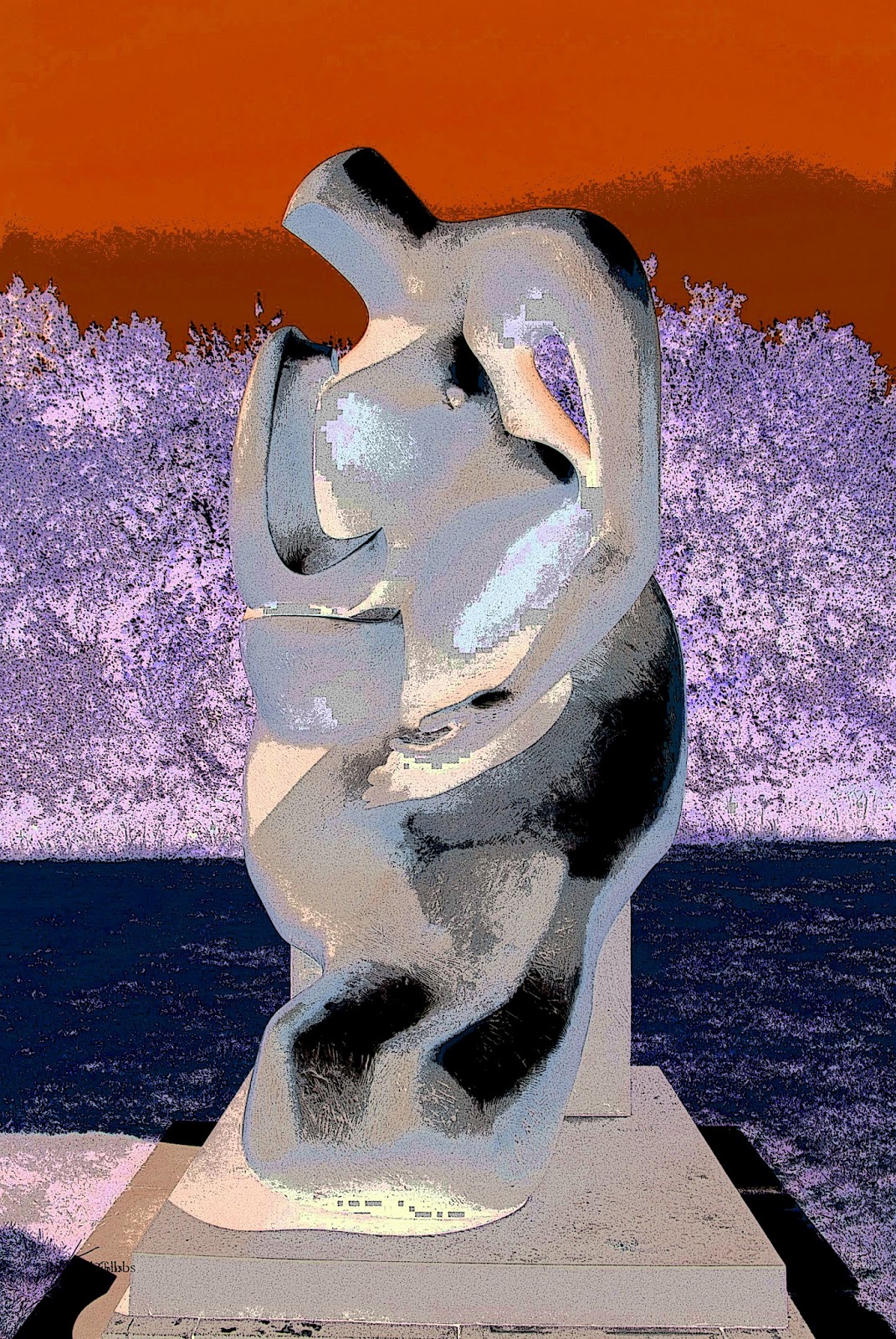 They married and lived in Hampstead, where they met other artists and writers such as Barbara Hepworth and Stephen Spender. His first one-man exhibition, consisting of sculptures and drawing, opened at the Warren Gallery in 1928 and from then on his fame increased as he became involved in the art life of London and exhibited in Switzerland. 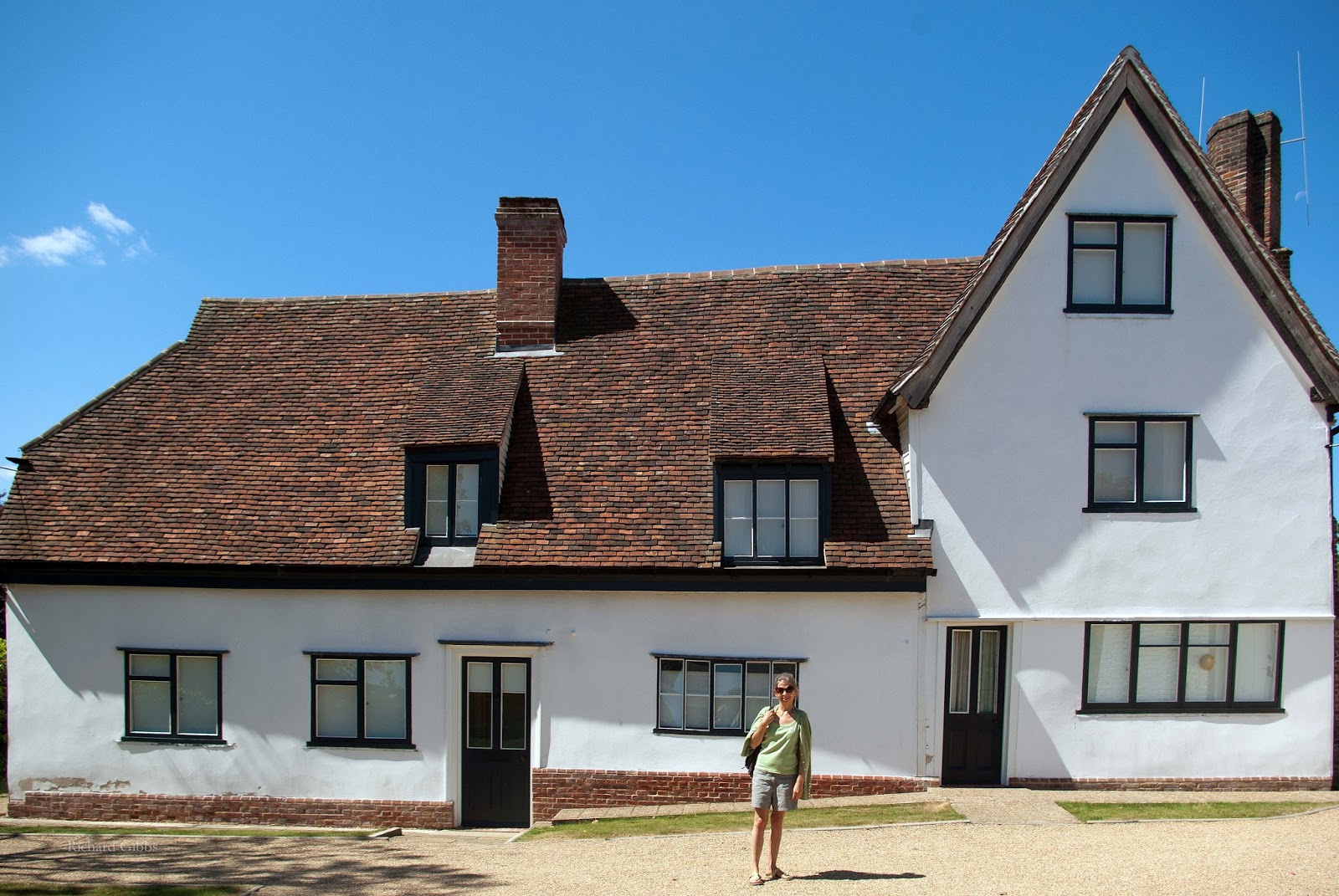 In 1940, after his Hampstead studio had been badly damaged in a bombing raid,  Henry Moore moved to this 17th century farmhouse in Perry Green that became his home until his death in 1986.

The house is just as he left it, as if he has gone out for a walk in the fields.  Bottles of scotch and brandy remain unfinished.  A valve radio is tuned to the Home Service.  The kitchen has an old fashioned simplicity that conjures up the warmth of soup and the smell of toast.  The office is cluttered with boxes of kodak film, sketches and models.  The arm chairs in the sitting room are worn and comfortable. There is the everyday sense of a busy genius at work, and at peace. 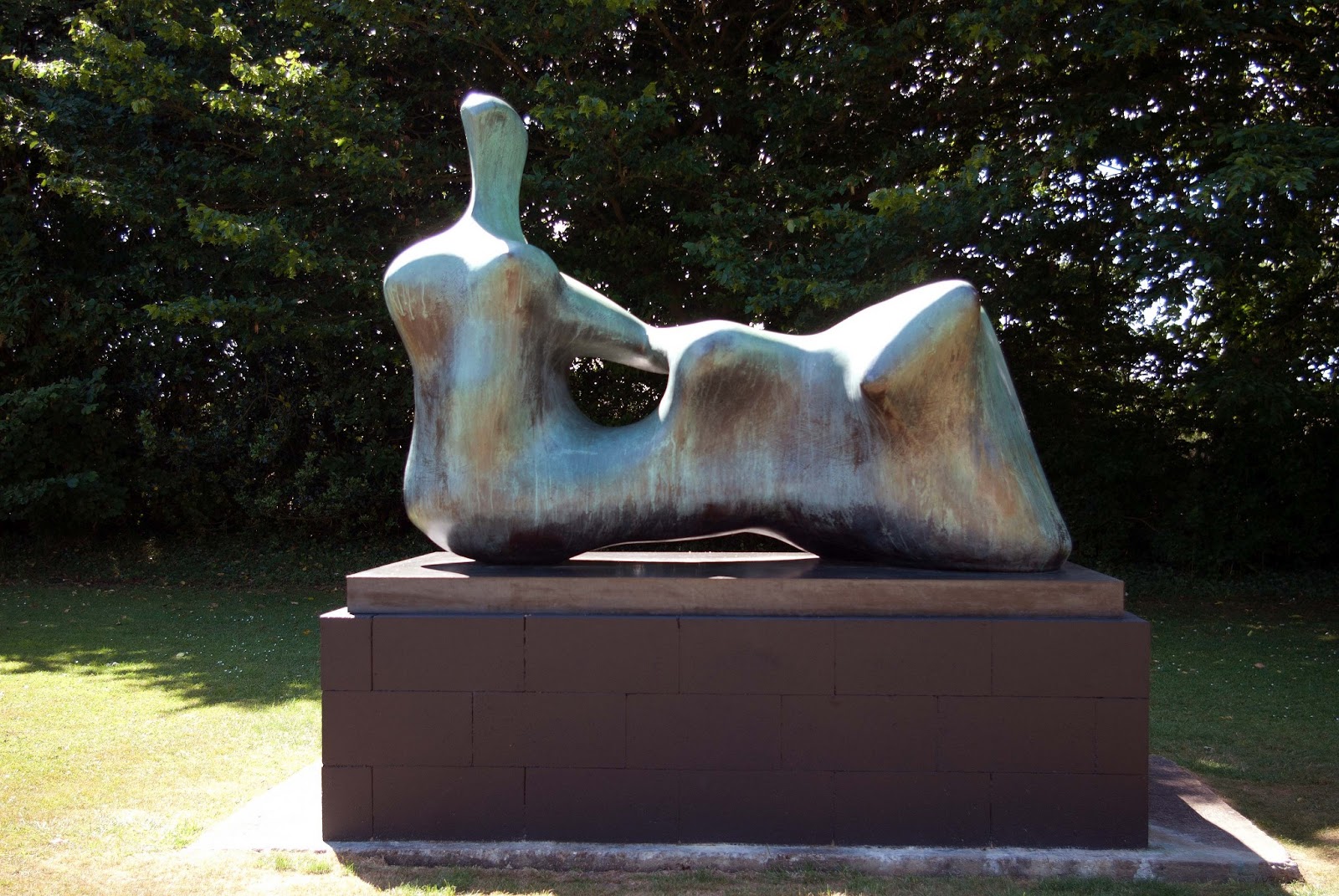 In the extensive grounds the Henry Moore Foundation (which is a registered charity, founded in 1977 by the artist himself, whose purpose is to preserve the legacy of Henry Moore and his work and to promote interest in the visual arts) has arranged many large pieces of work, mainly bronze sculptures. In the studios and galleries there are exhibitions of drawings and of the craft of producing bronze forms, as well as of sculpting marble. 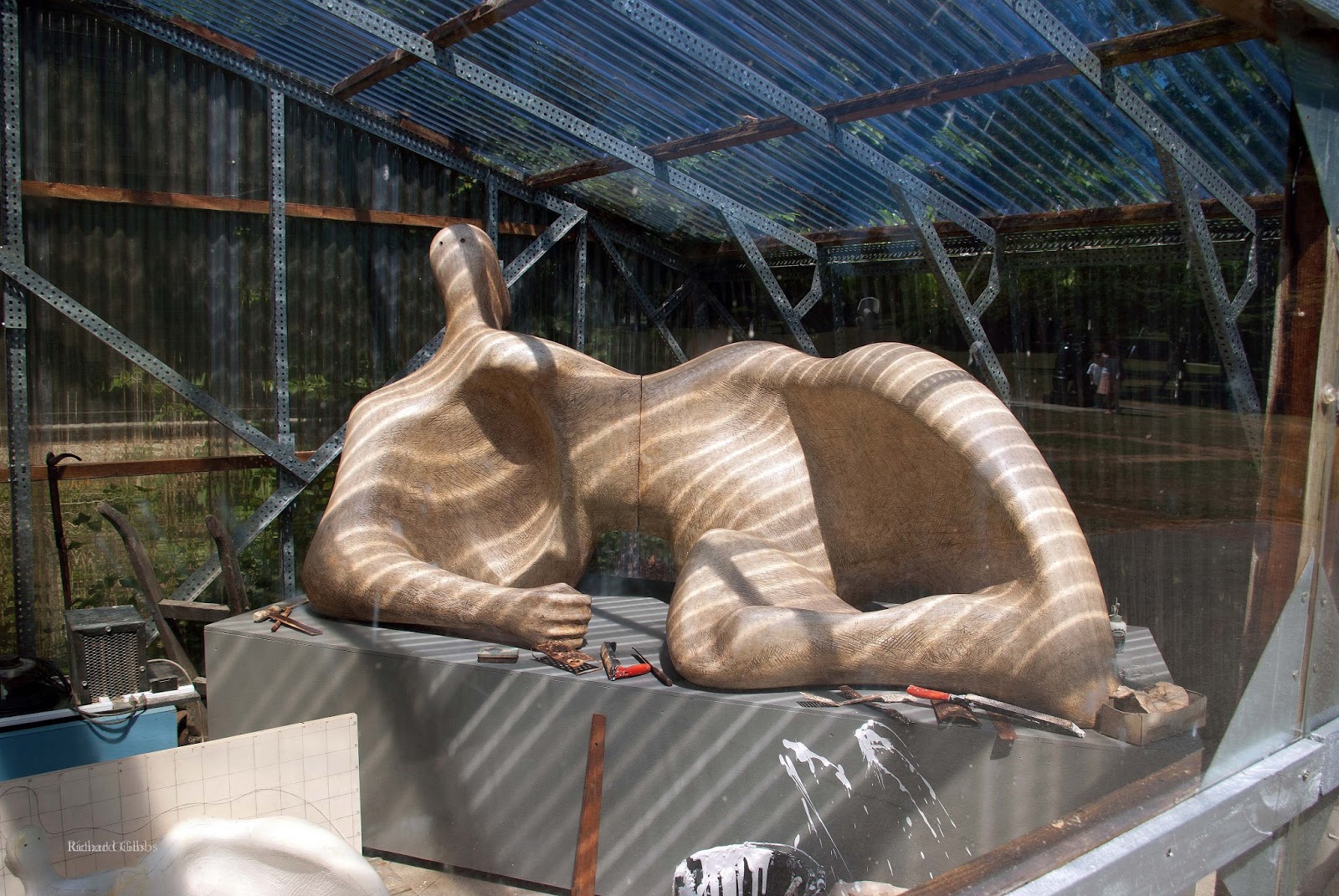 Some of the pieces are recognisably life forms, and the themes of family and mother and child recur. 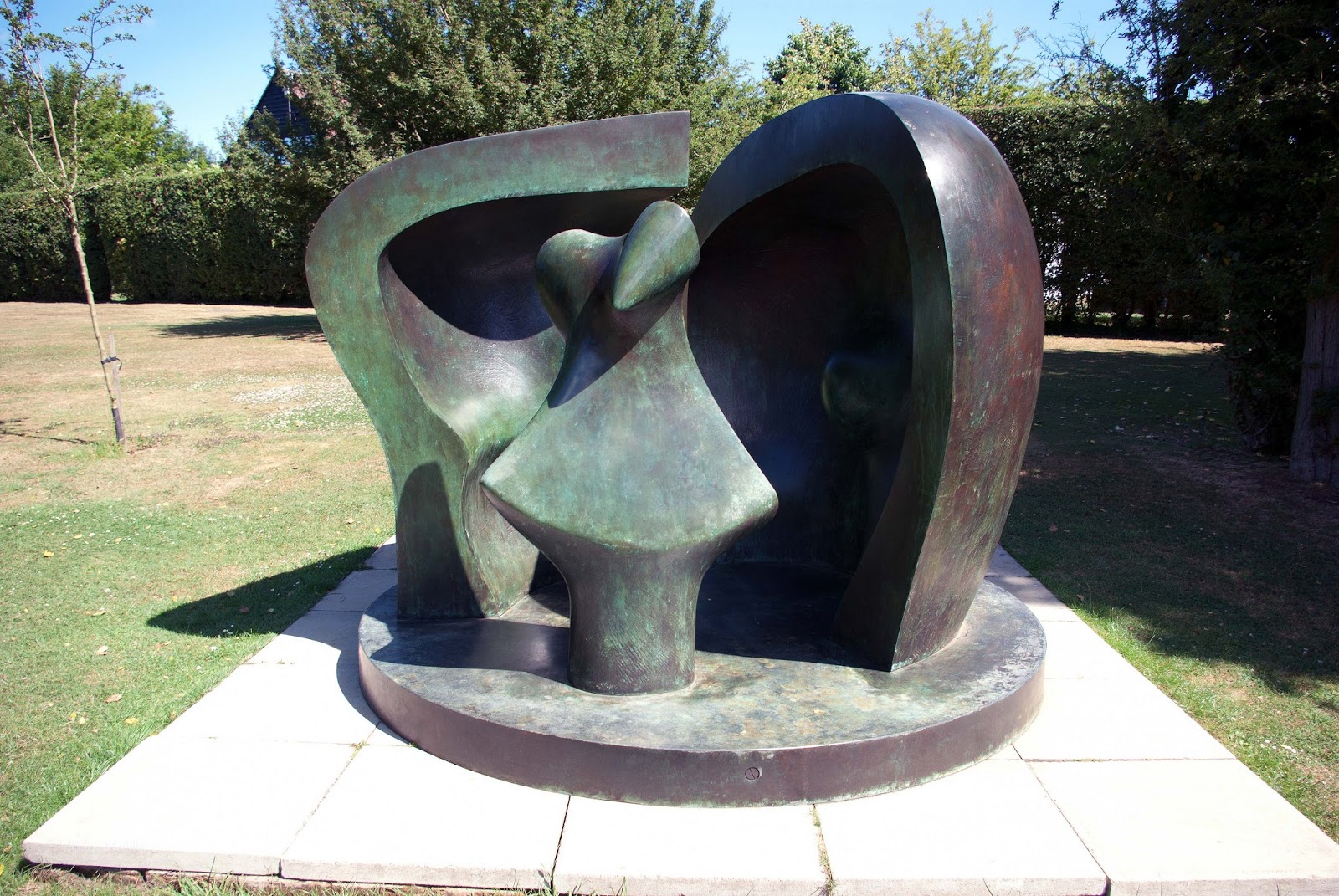 Others are more abstract and experiment with texture as well as form. 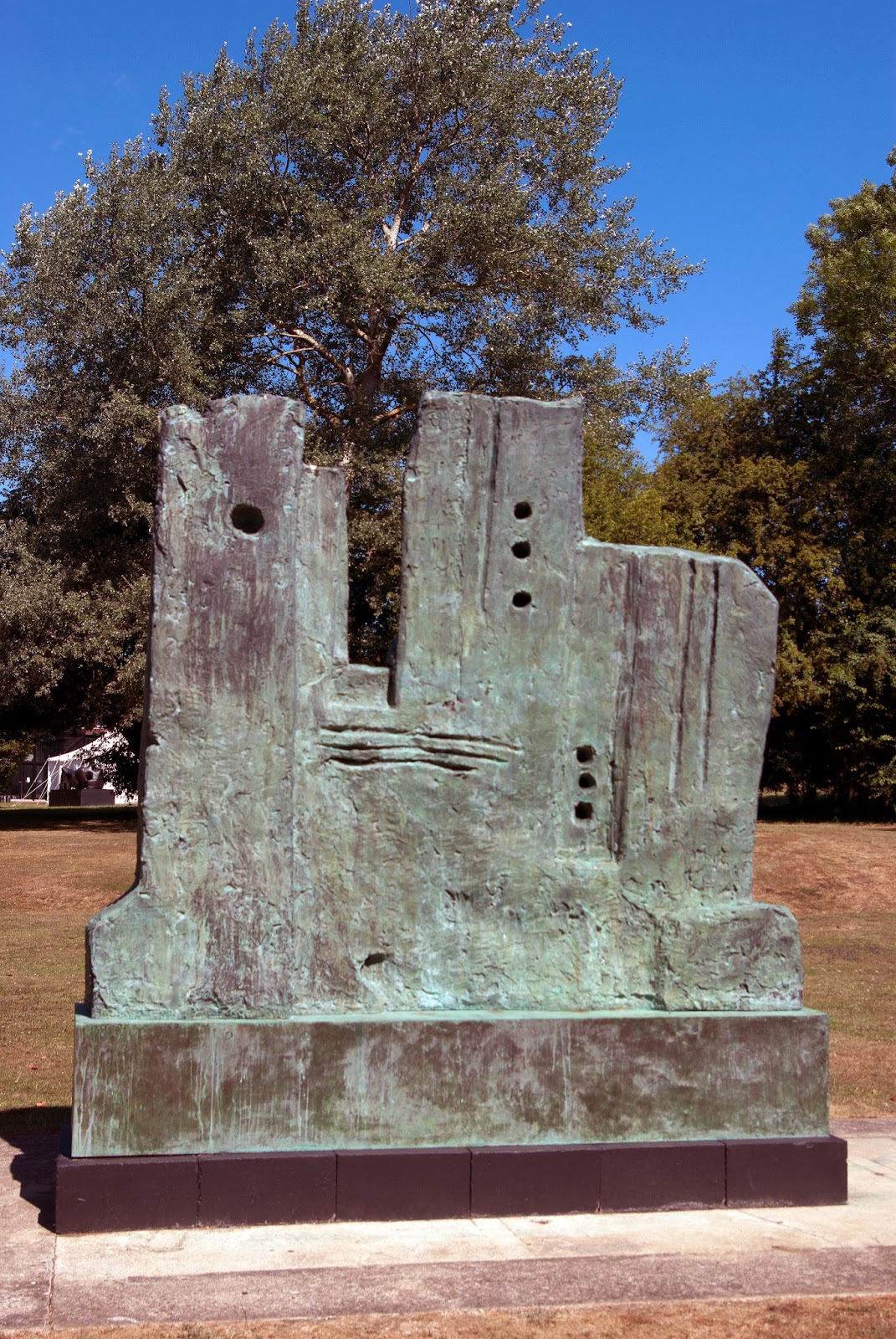 But the thrill is in the harmony and in the natural setting of these pieces.  As you move around, or through them, different aspects reveal themselves and the strange forms become familiar and welcoming. 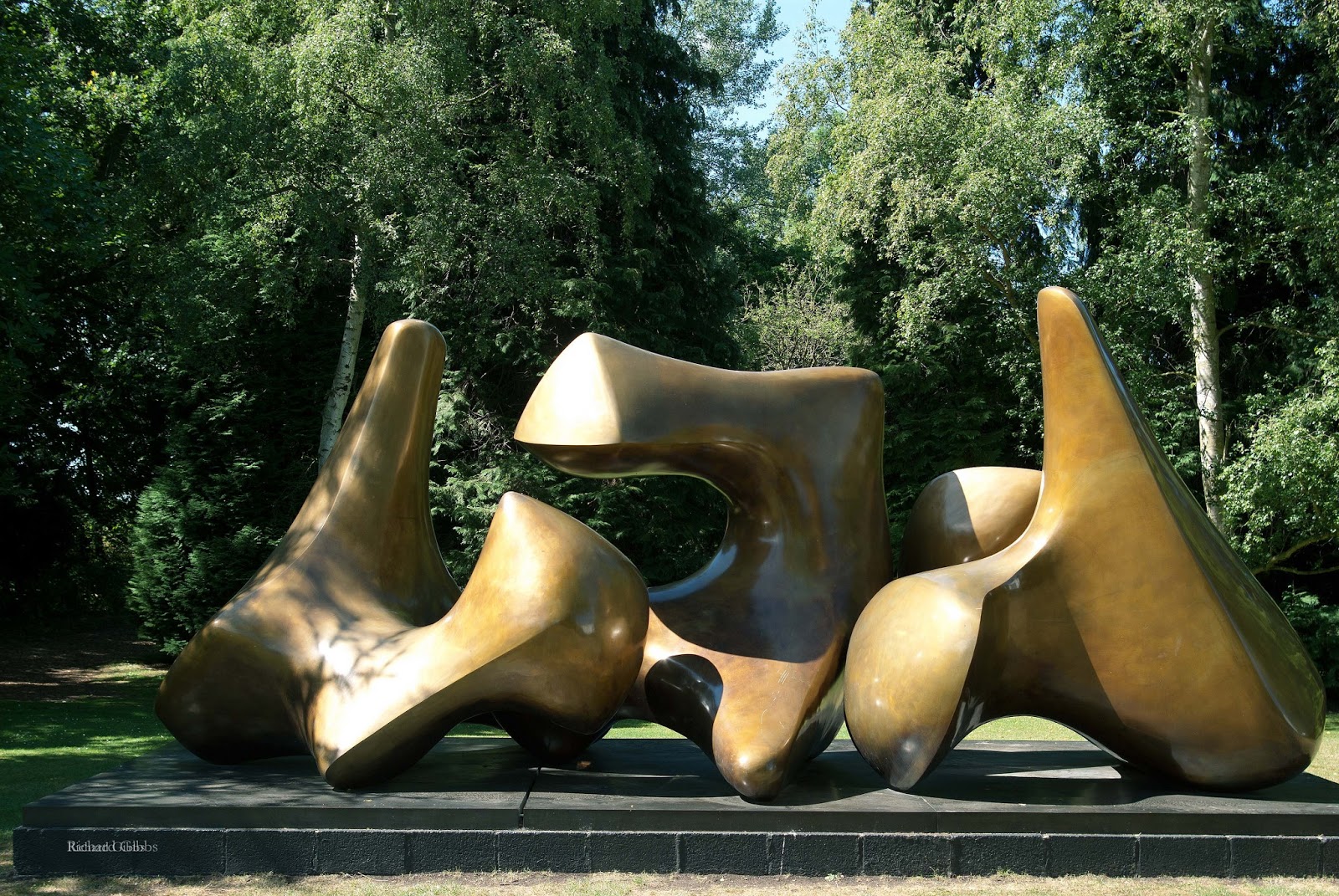 As you get closer the surfaces reflect the surrounding trees, or the sky, and the angles support each other, like intricate canyons sculpted by wind and water. 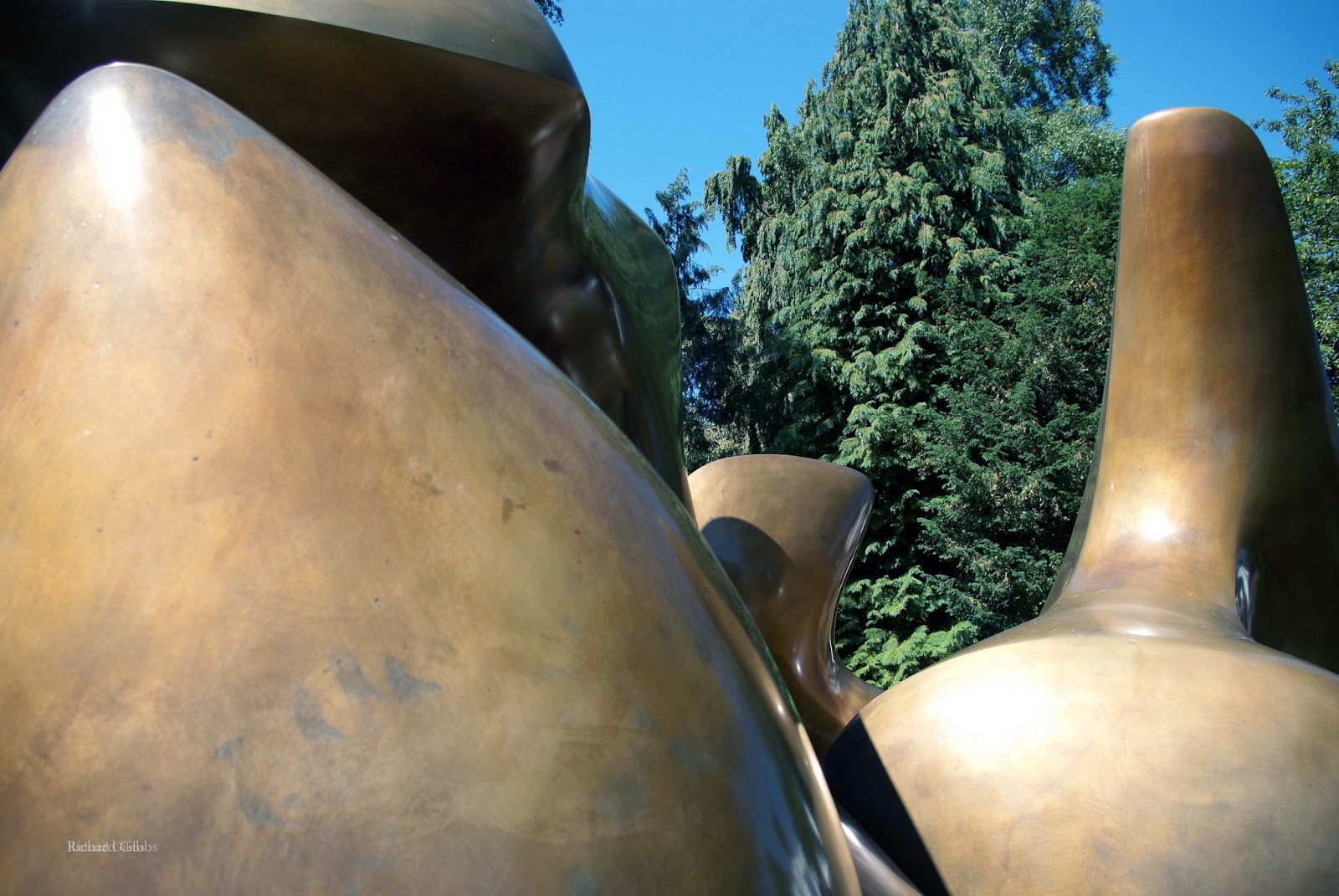 The Foundation's land extends from the garden and outhouses to fields rising away, populated by grazing sheep, who seem to take the enormous works for granted, using them as trees to shelter under, or trunks to rub against to soothe their itches. 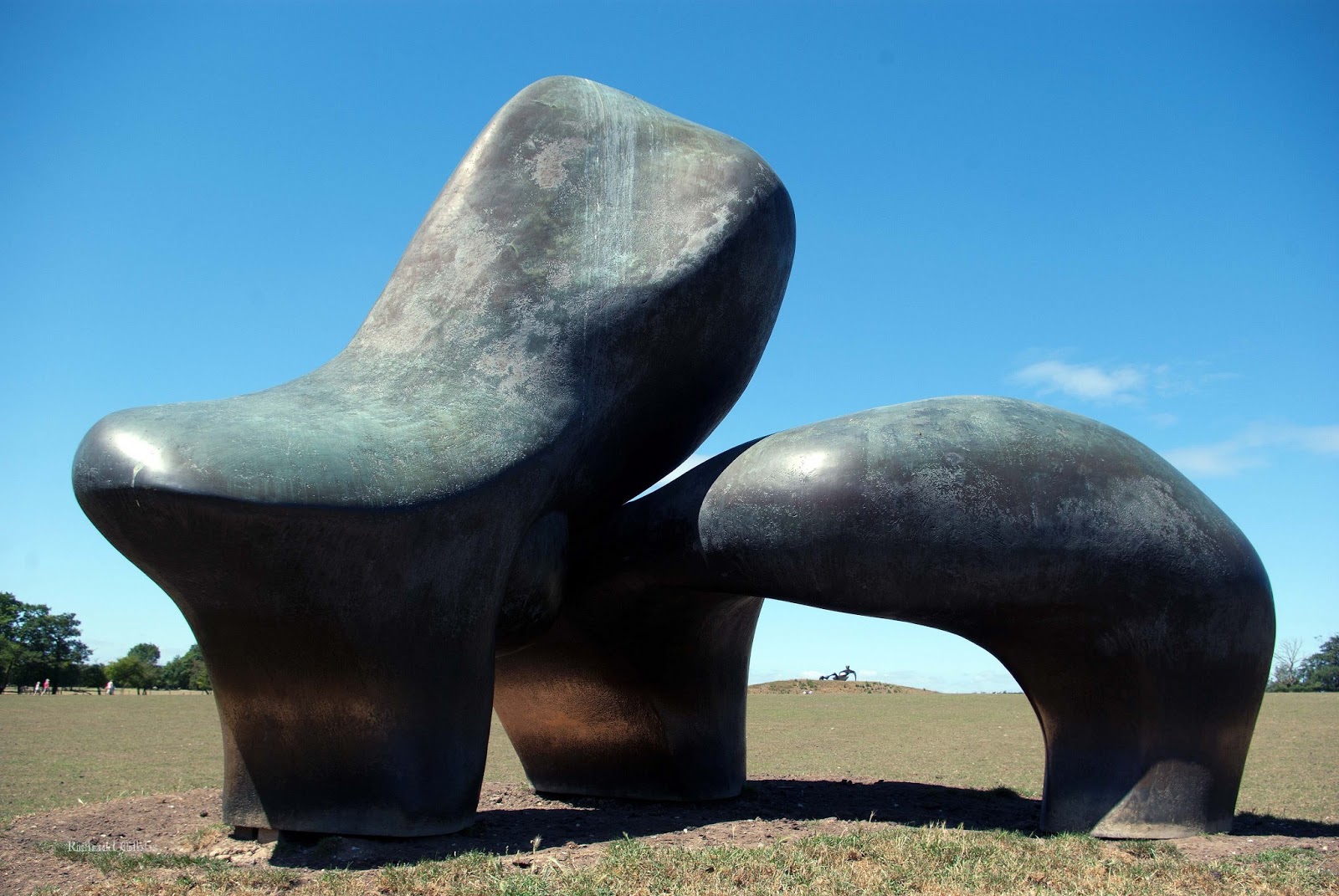 And the imagination works with the shapes to see in them a variety of lights and shades, of possibilities and reflections. 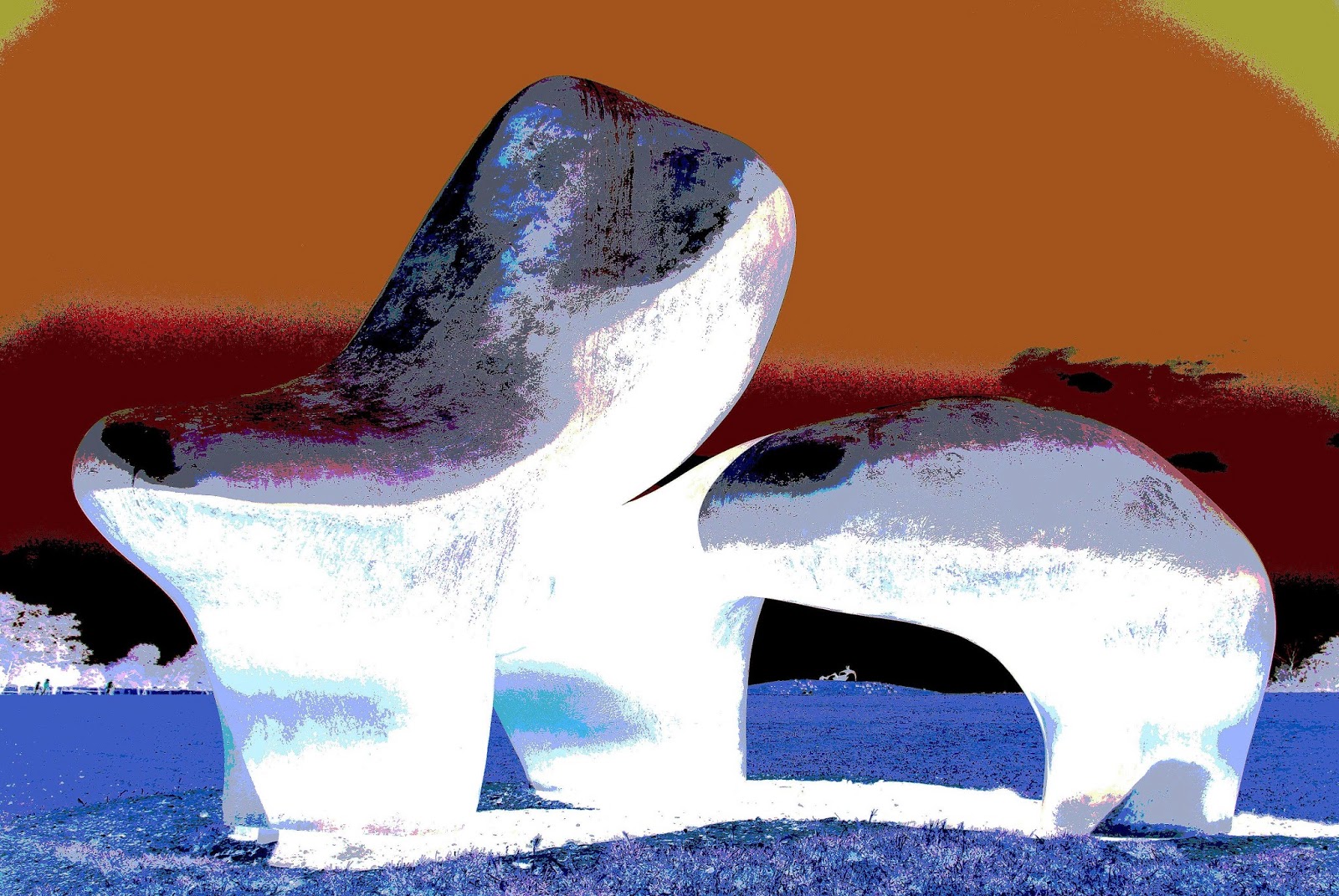 It is pleasant, especially when you think of the glass screen in front of La Pieta in Rome and the attacks she has faced, to be able to stroke these surfaces, to be one with the shapes, as the sensation of safety, of massive care, engulfs you. 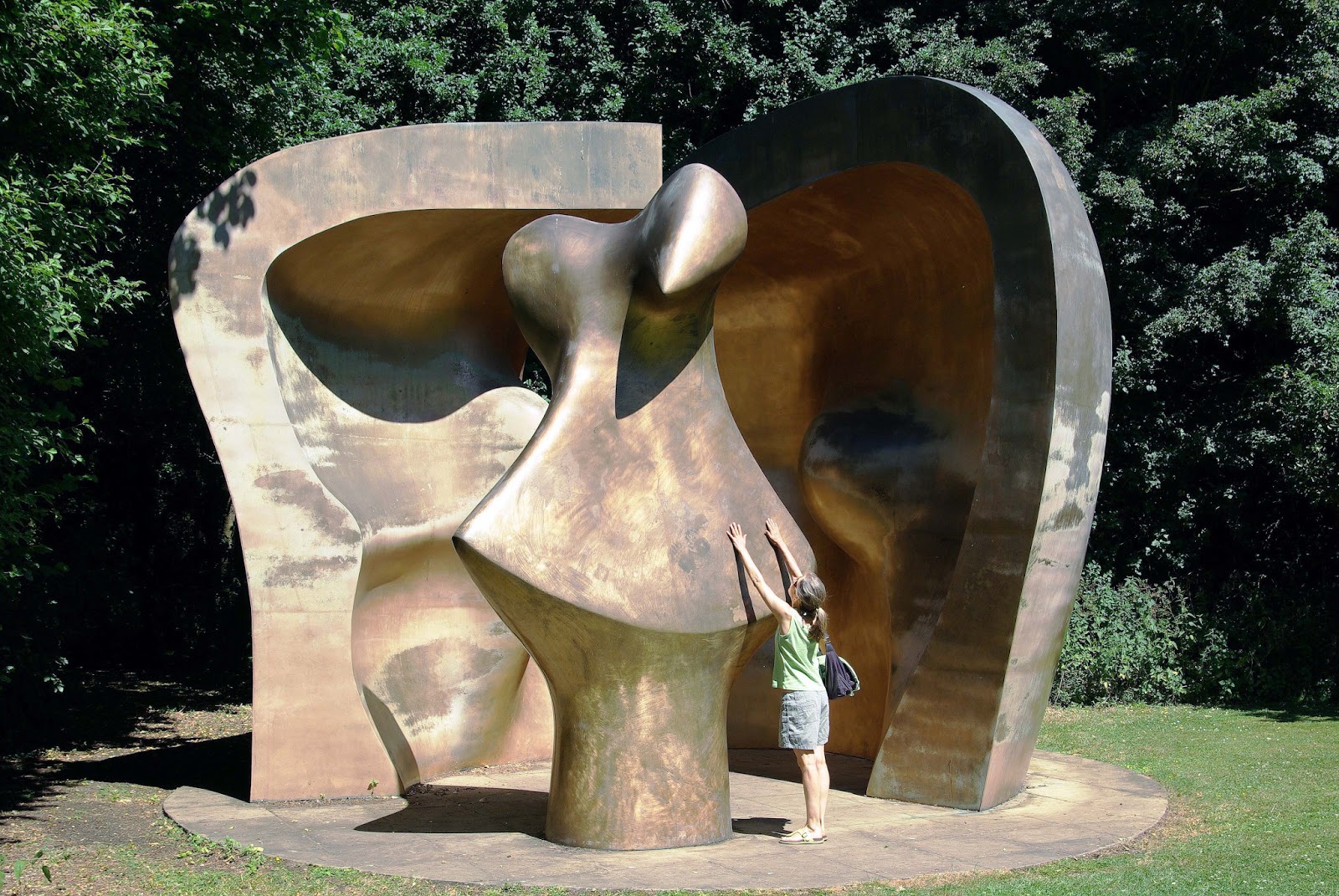 The embracing family protects the little one.  The circles seem like elephants' tusks that go on for eternity, or ears that will listen for ever. 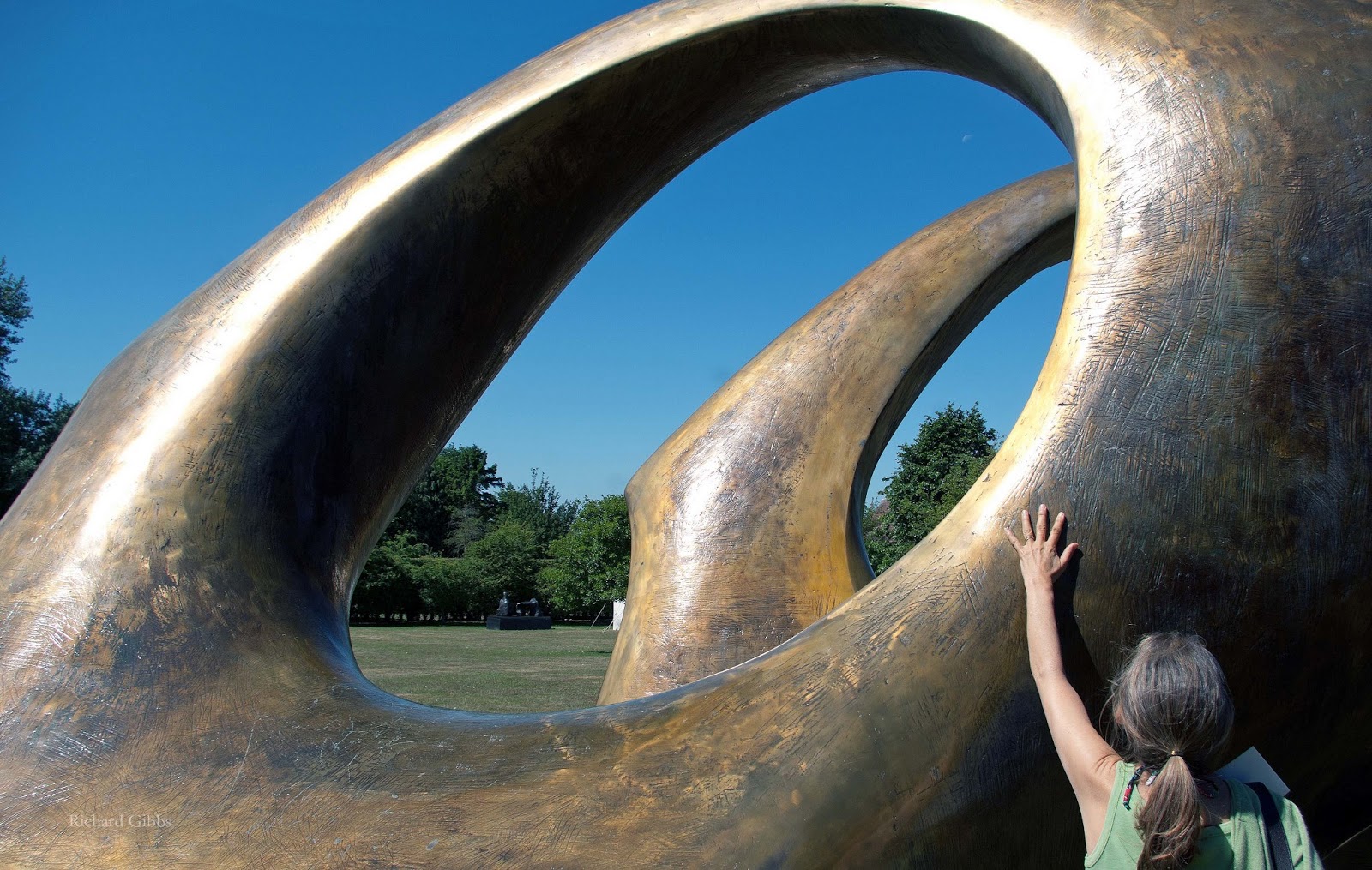 Some pieces are incredibly solid, daunting in their weight and size. Others are isolated and vulnerable, touched with femininity despite the weathered texture. 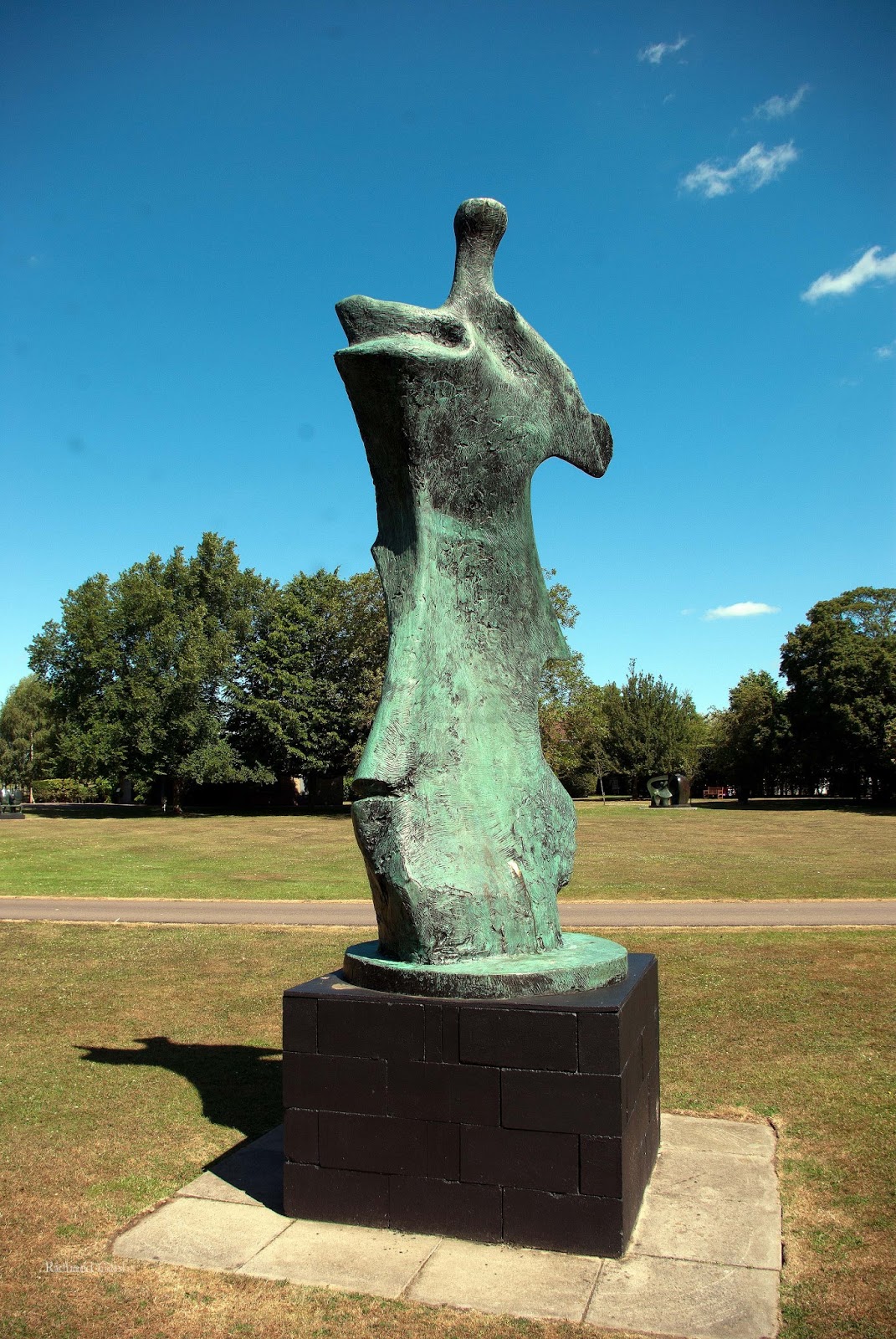 Moore's daughter Mary was born in 1946, the year of his first foreign retrospective exhibition, at the Museum of Modern Art, New York. Henry Moore became the most influential sculptor of the twentieth century. Influenced by his studies of Classical, Pre-Columbian (Chac-Mool is a recurrent idea) as well as African art he produced original sculptural forms which are largely abstractions of organic shapes. 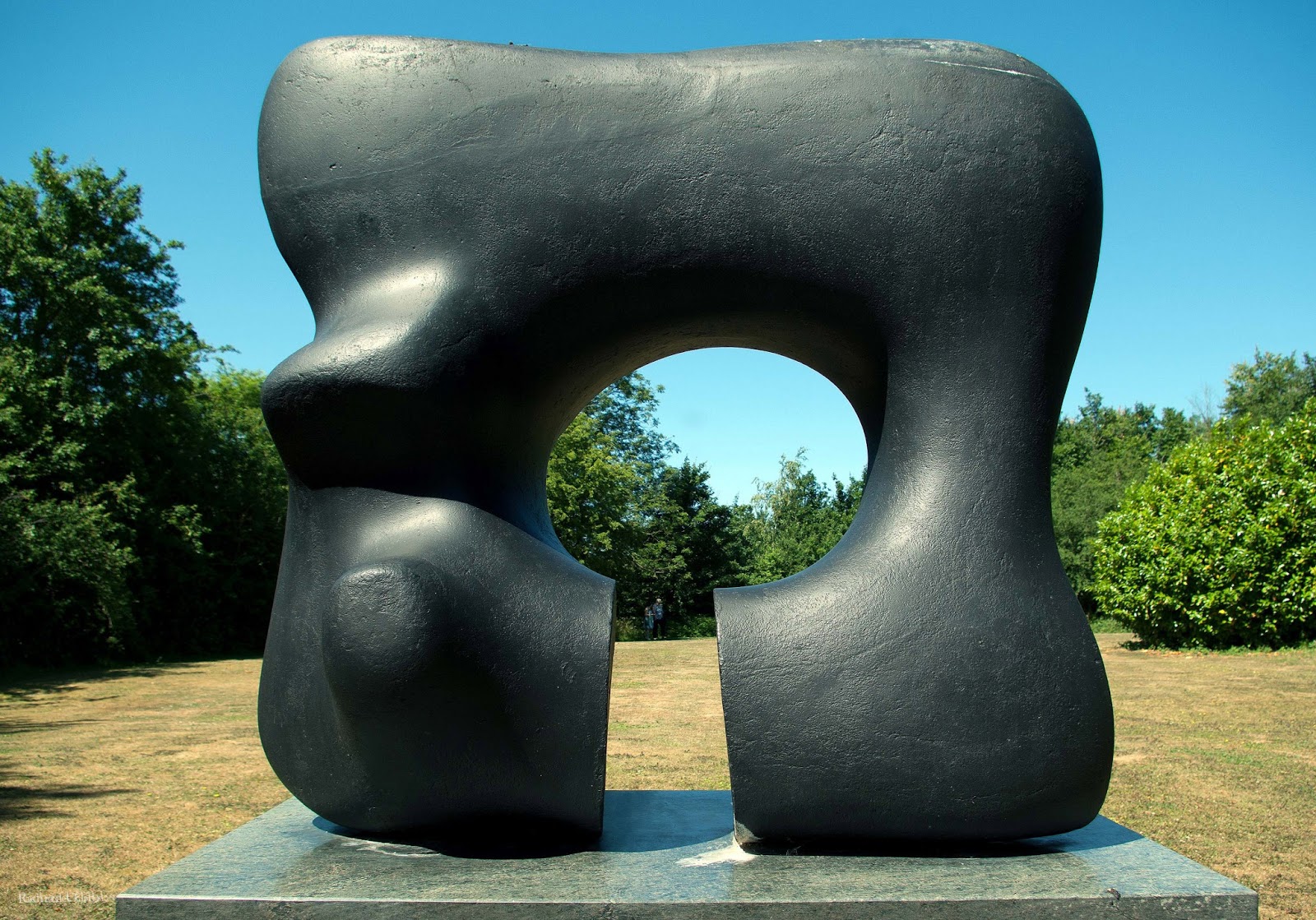 In my opinion, everything, every shape, every bit of natural form, animals, people, pebbles, shells, anything you like are all things that can help you to make a sculpture," Moore said of his work.  "The observation of nature is part of an artist's life, it enlarges his form [and] knowledge, keeps him fresh and from working only by formula, and feeds inspiration. 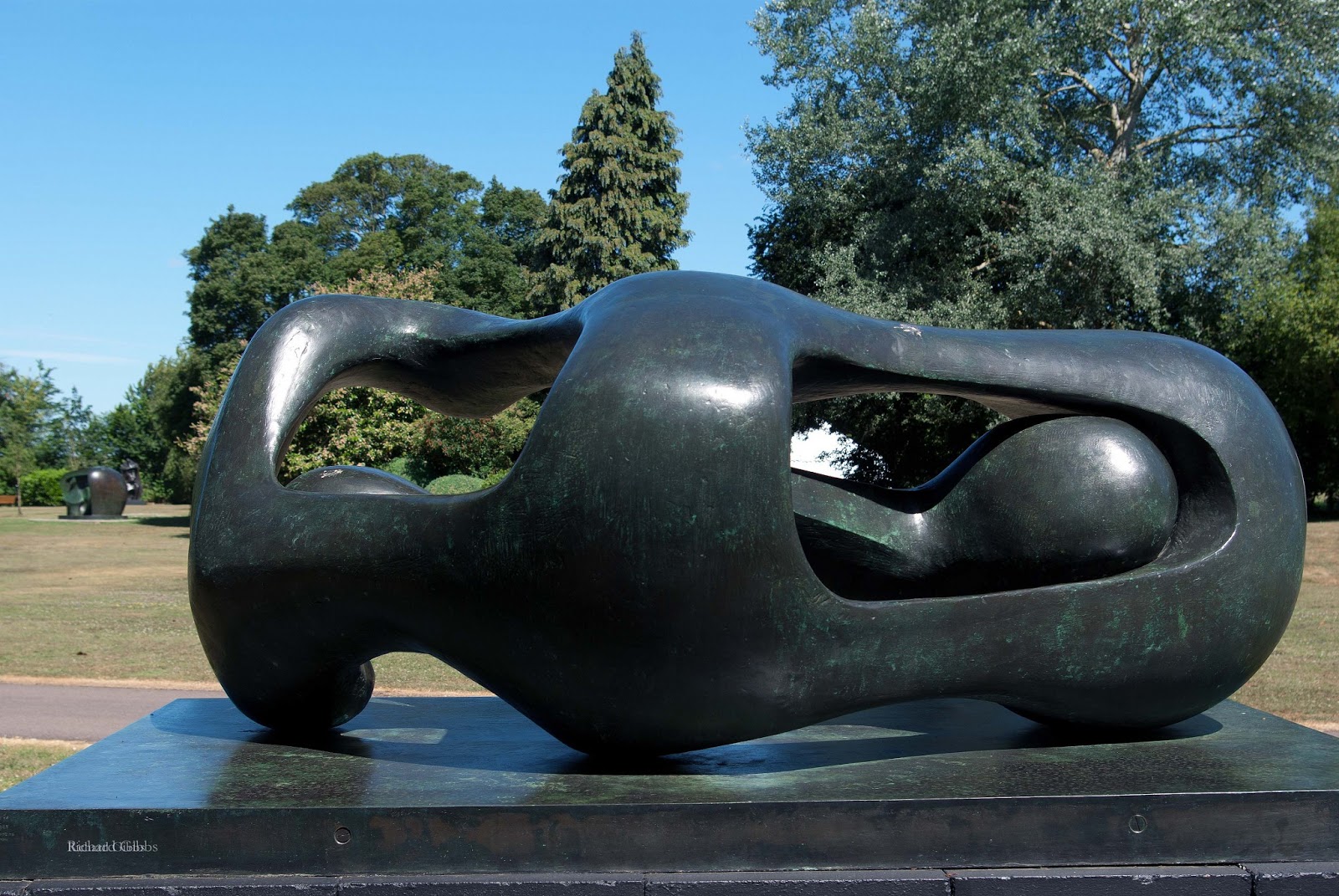 A visit to Perry Green is an inspiration and a pleasure.  Henry Moore may not actually be producing much new work these days, but his pieces are as fresh as if he had only just finished them, and you cannot help but feel his presence in the gentle surroundings of his home and studio.  I am sure that if you sit in the Hoops Inn just across the lane for long enough, the artist will walk in to join you for a drink.

Currently, and until October this year, Henry Moore's friend Rodin is holding an exhibition at Perry Green, so perhaps, if you are fortunate, they will both be there, in stone and bronze!