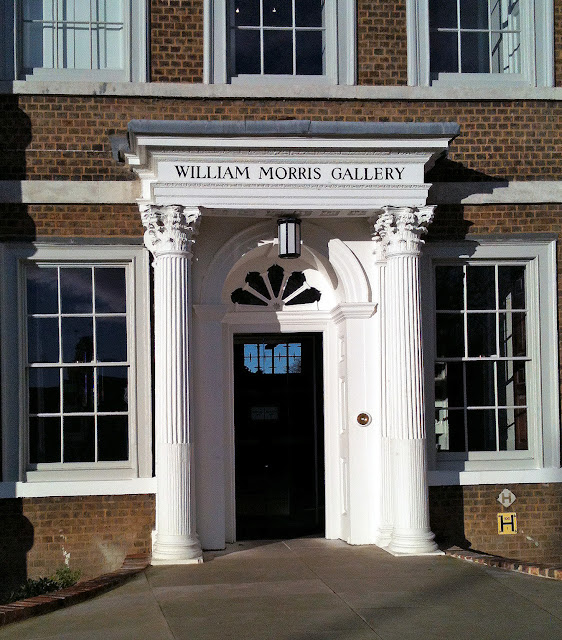 The William Morris Gallery (in Walthamstow) has been named Museum of the Year 2013 in the annual Art Fund awards. The honour comes with a prize of £100,000.

At the awards ceremony in the V&A, the judges said that the Gallery, “set the highest standards of curatorship, and reaches out impressively to its local community, and offers a memorable way of experiencing art of the highest quality in the context of a great historic personality.”


Since it re-opened to the public in August 2012, the Gallery has attracted around 100,000 visitors and, given its position on the edge of cosmopolitan Walthamstow, it is an exceptional venue in North East London.

William Morris is also back in Venice. At least his image is on display at the 55st Venice Biennale, in Jeremy Deller's We Sit Starving Amidst our Gold in the British Pavilion where he is seen about to throw Roman Abramovich's 377ft yacht Luna, which caused offence and obstruction outside the Giardini at the 2011 Venice Biennale, into the sea. 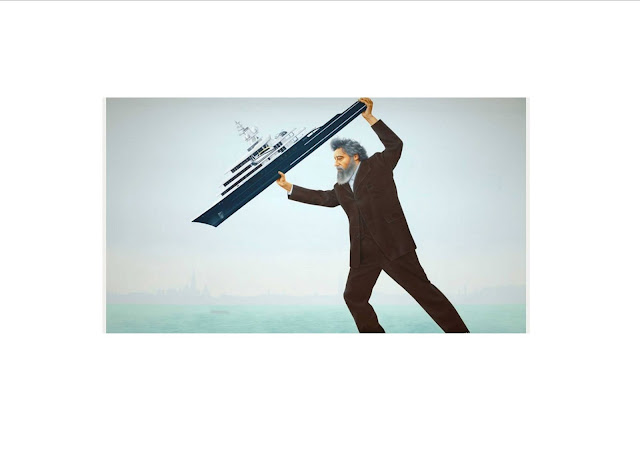 Not quite an image everyone would associate with the Victorian genius, perhaps because his estate was worth more than the equivalent of £10m on his death in 1896. Morris might not have thought the Russian oligarch's selfish lifestyle and extravagance was in keeping with his socialist ideals, but then he may have marvelled at the beauty and craftsmanship of the yacht and not been quite so violently iconoclastic.  The image below is more in keeping with his legacy, a settee made by him for his first marital home at the Red House, in Kent.

Elm House, where William Morris was born on March 24th 1834, not far from the Gallery in Walthamstow, and their subsequent home in Epping Forest from 1840 to 1848, are no longer with us. The family had moved after the death of his father, a wealthy bill-broker in the City, in 1847.

William was a privileged boy, but had a mind of his own.  He left Marlborough College in 1851 after a "rebellion" but still made it to Exeter College, Oxford, in 1853, where he met Burne-Jones.  Initially he intended to become a clergyman, but then, following a trip to northern France and the glorious gothic cathedrals there, he opted for architecture.


Having met and married the beautiful Jane Burden in 1859, he had his friend Philip Webb design a house for them above the Cray valley in rural Kent, which the Morrises moved into in 1860.  This building, which was their home for only five years, still manages to capture the love for the medieval, the pre-Raphaelite experimentation, and the joy in design, that William Morris was developing with his firm and with his life-style.

The Red House is a place of happiness.  Morris's two girls were born here, and his interests are on display even today, well over a century after his departure.  Dante Gabriel Rossetti said of the house that it is, "A real wonder of the age..... which baffles all description," probably because it was at once a modern construction and a medieval home.  It is no longer possible to compare it with other contemporary structures, but if we slip it into a reading of "News from Nowhere," and imagine that, "Withal, there was a total absence of what the nineteenth century calls 'comfort' - that is, stuffy inconvenience, so that, even apart from the delightful excitement of the day, I had never eaten my dinner so pleasantly before...." ("News from Nowhere," Chapter XVI) then we can perhaps get a whiff of the original attraction of the place?

It was in this house that Morris began to find his metier - he was not an architect, nor a painter, but he had an affinity with the medieval world; he was an acute observer; and he had the ability to work with others to see projects through to fruition.  So, for example, he could see the trellis and the flowers outside made a fine design, which could then be transferred to wood blocks for wall paper fabrication, but he could also get his friend Philip Webb to contribute the birds that complete the picture. 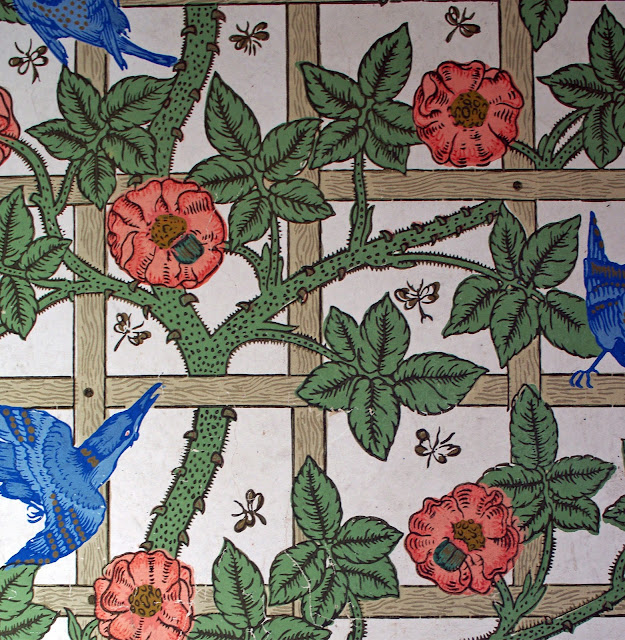 The development of the Firm's commercial side, however, meant that the family had to move, and so the idyll came to an end.  They moved to Queen's Square, Bloomsbury, and then, with Rossetti, Morris took on the lease of Kelsmcott Manor, a seventeenth century manor farm on the banks of the Thames in Oxfordshire, as a summer retreat and place of great solace.    It is a, "Many-gabled old house built by the simple country-folk of the long-past times, regardless of all the turmoil that was going on in cities and courts,  [it] is lovely still amidst all the beauty which these latter days have created; and I do not wonder at our friends tending it carefully and making much of it."  ("News from Nowhere," Chapter XXXL). 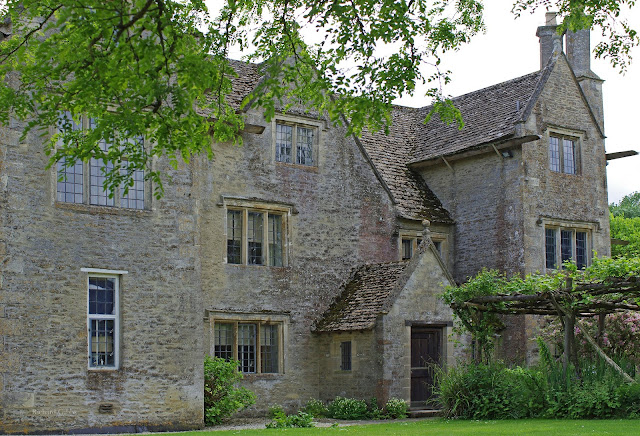 To visit Kelmscott Manor today is a treat.  You not only step back into the quiet world of Morris the antiquarian, of Morris the creator of the Kelmscott Press and the most beautiful edition of Chaucer that will ever exist, but you also have some idea of the kind of life that Morris himself relished from the past.  He was not a fan of his age; he lived a good, if relatively short, life, though it was not without its strife - his wife had a lengthy affair with Rossetti, conducted here in Kelmscott while Morris visited Iceland, and his elder daughter suffered seriously from epilepsy.  But with the mellow stone work and the tasteful layout, this is a building of love and charm.  Cold in winter, and damp (sometimes flooded), it represented a continuity of life from medieval times to the present that Morris longed to re-create. 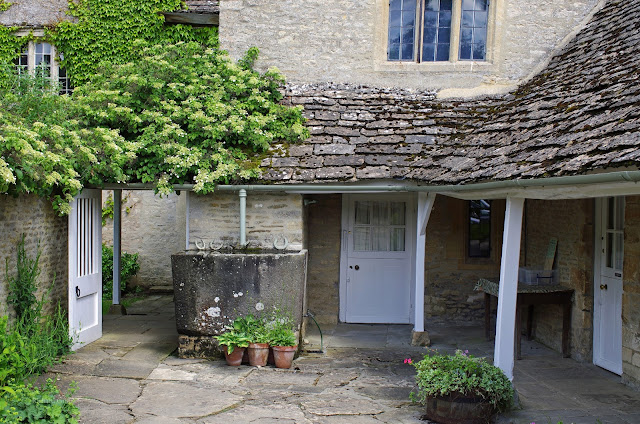 Light and shade, leaves and stones, lead and glass, wood and pottery - all the elements of a work of craft come together in a certain harmony, which is picked up in the surrounding buildings, and the village church, where Morris and his wife are buried. 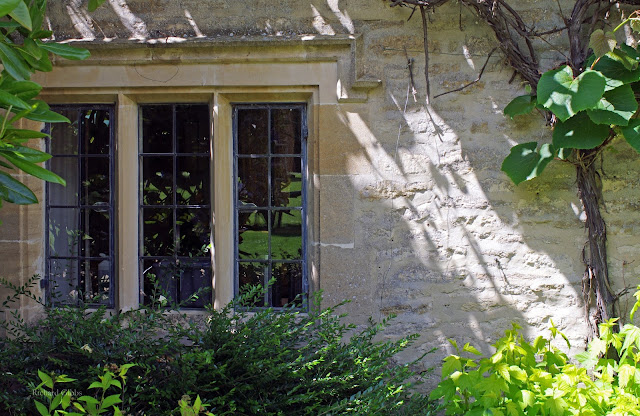 And there are the outhouses with their utensils and artefacts, and the triple seater privy - part of a world that Morris wished had not been forgotten. 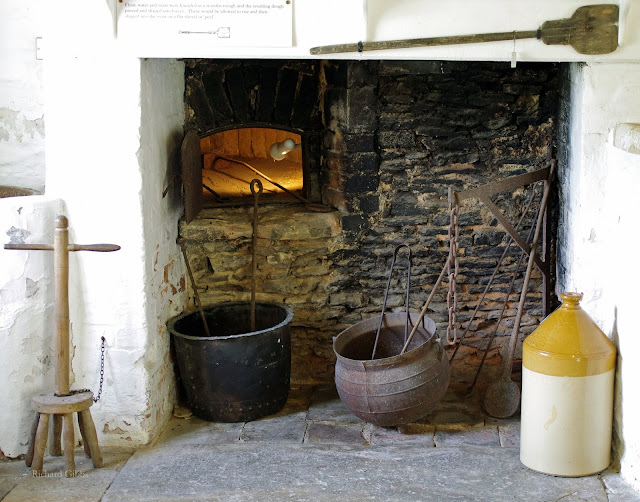 But Morris did not live out his life here in Oxfordshire.  Ever busy and creative and politically active in his later days with the Socialist League, he had made a permanent home in Hammersmith, at The Retreat (quickly renamed Kelmscott House) which he leased from April 4th 1878 for £85 a year.  This Georgian building overlooks the Thames and had extensive gardens out the back (since cut through by the A4).  In 1892 Morris wrote that, "If I were asked to say what is at once the most important production of Art and the thing to be most longed for, I should answer, A beautiful house.....  To enjoy good houses and good books in self-respect and decent comfort, seems to me to be the pleasurable end towards which all societies of human beings ought now to struggle."  And Kelmscott House, home of the William Morris Society, is indeed a beautiful house.  Here William Morris died, on October 3rd, 1896, at the age of 62, and here at least a part of his soul lives on in the enthusiasm of the curators of the small museum in the coach house.


Certain aspects of Morris's work have fallen out of fashion.  His literary works have been surpassed, perhaps, by so many million words by so many thousand writers, that it is difficult to immerse yourself in the worlds he strove to create on the page.

But his intense interest in skills and arts of the past, particularly the medieval period, and his championship of architectural styles which should not be bastardised have left a mark on our society.  His designs and motifs are recognised and manufactured today, and his use of forms, colours and patterns has had huge influence on our interior design industries, and tastes.

William Morris's practical socialist ideas were not based on Marx; they were based on the study and history and the love and practice of art.  At the end of "How I Became a Socialist," published in 1894, just two years before his death, Morris wrote: "It is the province of art to set the true ideal of a full and reasonable life before him [the workman], a life to which the perception and creation of beauty, the enjoyment of real pleasure that is, shall be felt to be as necessary to man as his daily bread, and that no man, and no set of men, can be deprived of this except by mere opposition, which should be resisted to the utmost."

I confess that I am only beginning now to learn the steps of the Morris Dance, at the exact same age as when the master died, but I am drawn in, I hear the music, and I feel I could do with more.  It is great that the William Morris Gallery has been awarded Museum of the Year 2013, and great that there are these wonderful sites to visit on his trail.

Perhaps Jeremy Deller is right to bring the master back to wreck the excesses of Abramovich? But I prefer to think of  William Morris not as a destroyer, but as a creator, a man whose imagination could take from the past and embellish the future. 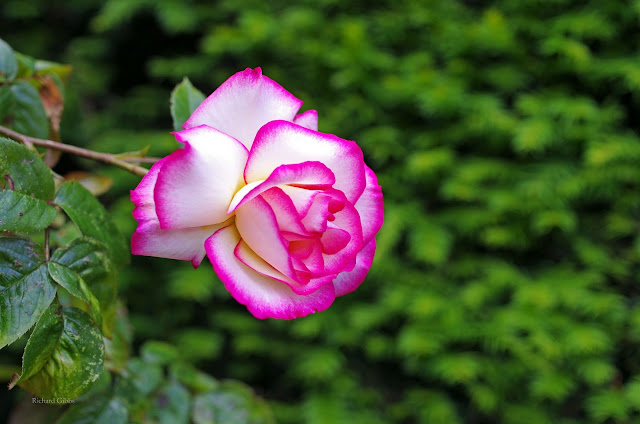