I'm at The Grapes, in Narrow Street, Limehouse, having lunch with Ian McKellen. Or rather should be, though he hasn't turned up. I mean, he only lives a few doors away. And he does part own this pub (with former partner, director Sean Mathias, and multi-millionaire Evgeny Lebedev). And we did meet once..... But then, he didn't invite me, nor I him.... So, I would be having lunch with Ian McKellen.

So we could have the Limehouse Blues, from one of Fats Waller's stranger ditties, directed at Chinatown:


But actually we don't have the blues at all.  It's almost a fairy tale to sit upstairs in The Six Jolly Fellowship Porters with none but Jayne, our most pleasant hostess, and the river flooding below.  The room reeks of history, of clay pipes smoken and broken, of hops  and malt and opium (in the mind at least).  Canary Wharf now projects where the cranes of the docklands sprouted, but the timbers creak their secrets as the river swirls past.

One half of Narrow Street stands while the other has been recreated after the blitz erased history and squalor.  Sax Rohmer (aka Arthur Henry Sarsfield Ward)'s Fu Manchu has been snuffed by the likes of Gordon Ramsay, whose blue tongue would frighten many a yellow peril.  [This refers back to much contention around the ethnic mix of earlier days, but Sax Rohmer himself declared, by way of defence that, "Of course, not the whole Chinese population of Limehouse was criminal."]

This was a rough area, pungent with the limekilns and infested with mariners, from all over the world.  Ships crowded into the basins, which themselves had been created by clearing slums, and tar, tobacco, alcohol and prostitution were the warp and weft of life.

About a hundred years ago, Thomas Burke waxed lyrical about the area:  "You find the scum of the world's worst countries; all the peoples of the delirious Pacific of whom you have read and dreamed..... Here are pace and high adventure; the tang of the East; fusion of blood and race and creed.  A dangerous dross."
And fifteen years later, H V Morton added his pennyworth: "The squalor (sic) of Limehouse is that strange squalor (sic) of the East which seems to conceal vicious splendour (sic)."


But it was not always thus:
"Calm was the day, and through the trembling air
Sweet-breathing Zephyrus did softly play—"

So wrote Edmund Spenser (1552 - 1599) in Prothalamion, in honour of a local double marriage, and so it was as I:
"Walk'd forth to ease my pain
Along the shore of silver-streaming Thames."
It's a fine day, with a breeze, and the riverside is bright with Spring.  The Grapes, commemorated in Charles Dickens' "Our Mutual Friend:"  "The Six Jolly Fellowship Porters.... a tavern of a dropsical appearance, had long settled down into a state of hale infirmity. In its whole constitution it had not a straight floor, and hardly a straight line; but it had outlasted, and clearly would yet outlast, many a better-trimmed building, many a sprucer public-house."


I wonder at how the Luftwaffe missed this place, and indeed the other half dozen or so riverside pubs that have survived the centuries and the blitz, until I recall an obscure passage in the private diaries of Hermann Goering (whose morphine addiction may have affected him?) which now makes sense. Loosely translated, it reads:  "Grapes, Whitby, Ramsgate, Kidd; must be preserved.  I hope one day to have lunch with MacKillin.  It is mein Liebestraum.....  {I believe they smoke opium there.....}"  And so the pub has become, "gnarled and riven, according to the manner of old trees," while much of the surrounding land has been redeveloped, smartly arising out of the fogs and blasts of the past.  Thank you Hermann....


Anyway there are other histories here, from a glimpse of the Mayflower pub across the river, where the Mayflower moored before her epic voyage, to this plaque (below) which commemorates other great men of the sea.

And The Prospect of Whitby, once The Devil's Tavern, which has flagged floors, ancient timbers and terraces with fine views up and down the river.

Pepys, Turner, Dickens and Whistler are all said to have imbibed within these walls (though despite romantic enthusiasm it is unlikely that they ever met!)  Fu Manchu himself, and Sherlock Holmes, could well have been here too.


John Betjeman lived around here for a time, in a tumbled down river-front house with a bedroom that hung over the Thames.  "I put my bed on the river side of the room and it was delicious to go to sleep to the solacing sounds of the water."  This was, "the most restful few months [I] ever spent in London."   The house was demolished fifty years ago. 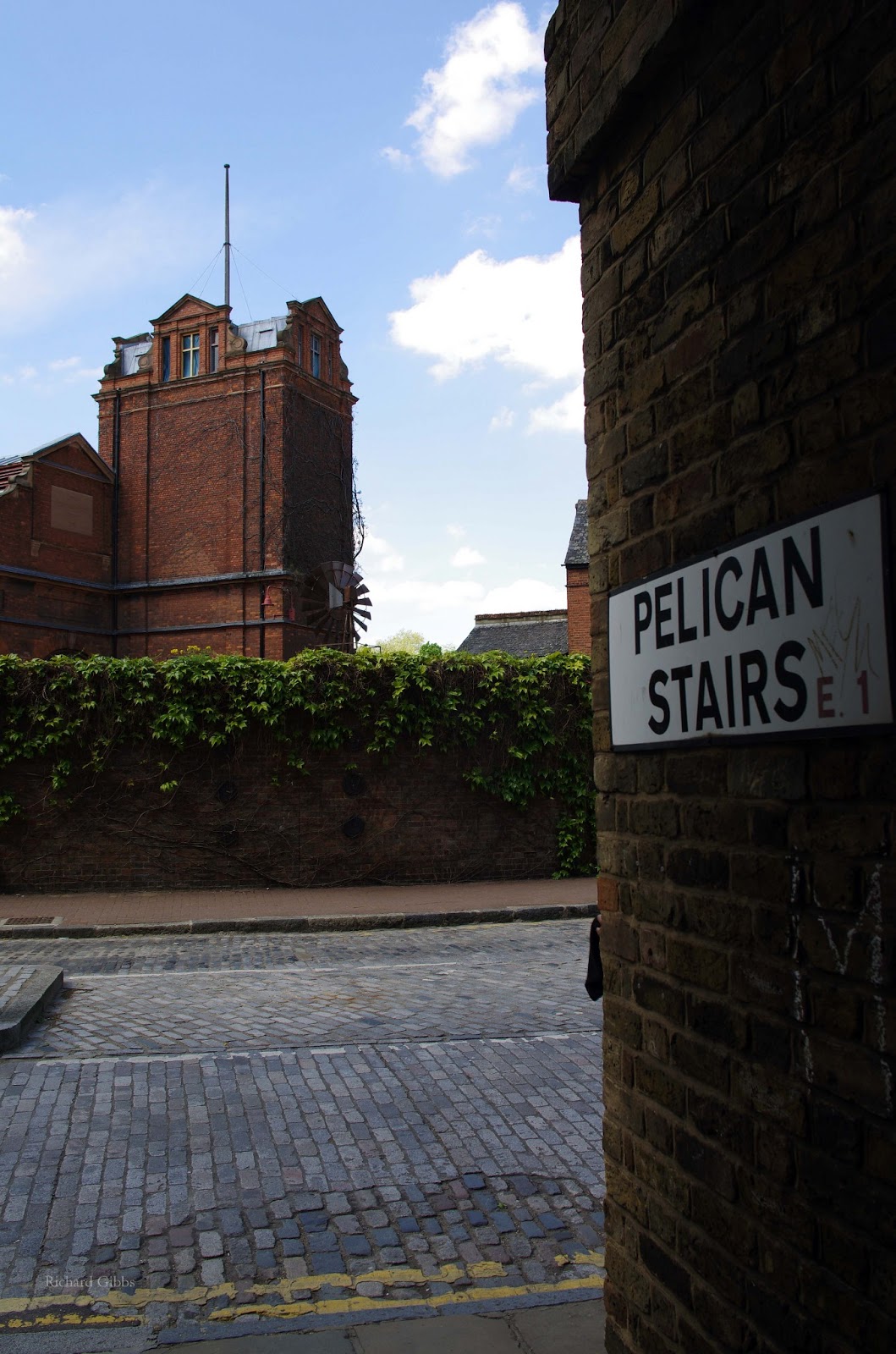 Betjeman's pied-a-terre was near Executioner's Dock, where Captain Kidd, et alios, were hung until three tides had passed over them.  The stairs that lead to such a grisly spot are still there, leading down from the brick cobbled street, though it has been a while since the gibbet has been put to use.


Up and down the roads the majority of warehouses have been erased or converted into attractive (and expensive) apartments, but some Georgian buildings remain unscathed.


In 1973, Evening Standard journalist Tom Pocock estimated that the smallest bachelor flat would cost £13,500. You would be lucky these days to get change out of £400,000.


And another poet to walk forth to ease his pain by the river here was Wilfred Owen:

"I am the ghost of Shadwell Stair.
Along the wharves by the water-house,
And through the cavernous slaughter-house,
I am the shadow that walks there."


Owen drafted that in 1918, not long before his death, and it is a brooding, ominous poem, with visual and oral imagery such as: "Shuddering the purple street-arc burns," and, "Dolorously the shipping clanks," which are not the happiest of sights and sounds. But Owen was drawn here and in 1915 had written of how he, "craved the East End's ugliness..... Ugliness! I never saw so much beauty……."


One other artist to have made this stretch of the river his home was David Lean, he of the wonderful films from "Great Expectations" and "Oliver Twist" to "Dr Zhivago" and "Lawrence of Arabia."  He was a long term resident here (after years of living in Rome) and his home on Narrow Street, Limehouse, is still owned by his family.  Journalist Charles Champlin interviewed Lean on December 31st, 1989, at Sun Wharf. "It is all brick and beams, solidly masculine, with massive windows on the second level from which Lean can watch the ceaseless river traffic, including the tour boats chugging down to Greenwich and back."


And the reason for the interview was that the 81 year old Lean was preparing a film of Joseph Conrad's 1904 novel "Nostromo" with Marlon Brando in the cast, Robert Bolt as screenwriter, and Serge Silberman as producer.  Who better than Conrad to ferment ideas in Limehouse? One of the greatest writers in the English language, but a native Pole and a sailor until his middle age.
"At the end of his life," Champlin quotes Lean as saying, "Conrad toyed with the idea of making 'Nostromo' into an opera, and it has a kind of sense. It's way over the top. I confess I love things that are not quite real."


And it is this quality that brings life to Limehouse, Wapping and Shadwell.  It is not what it seems, nor what it was. Because of the river, flowing softly, it is a cyc screen on which our imaginations are projected.  It is not quite real because it has been so many things in the past, and it is not quite real because the geography holds the shape and sense of vanished forms. 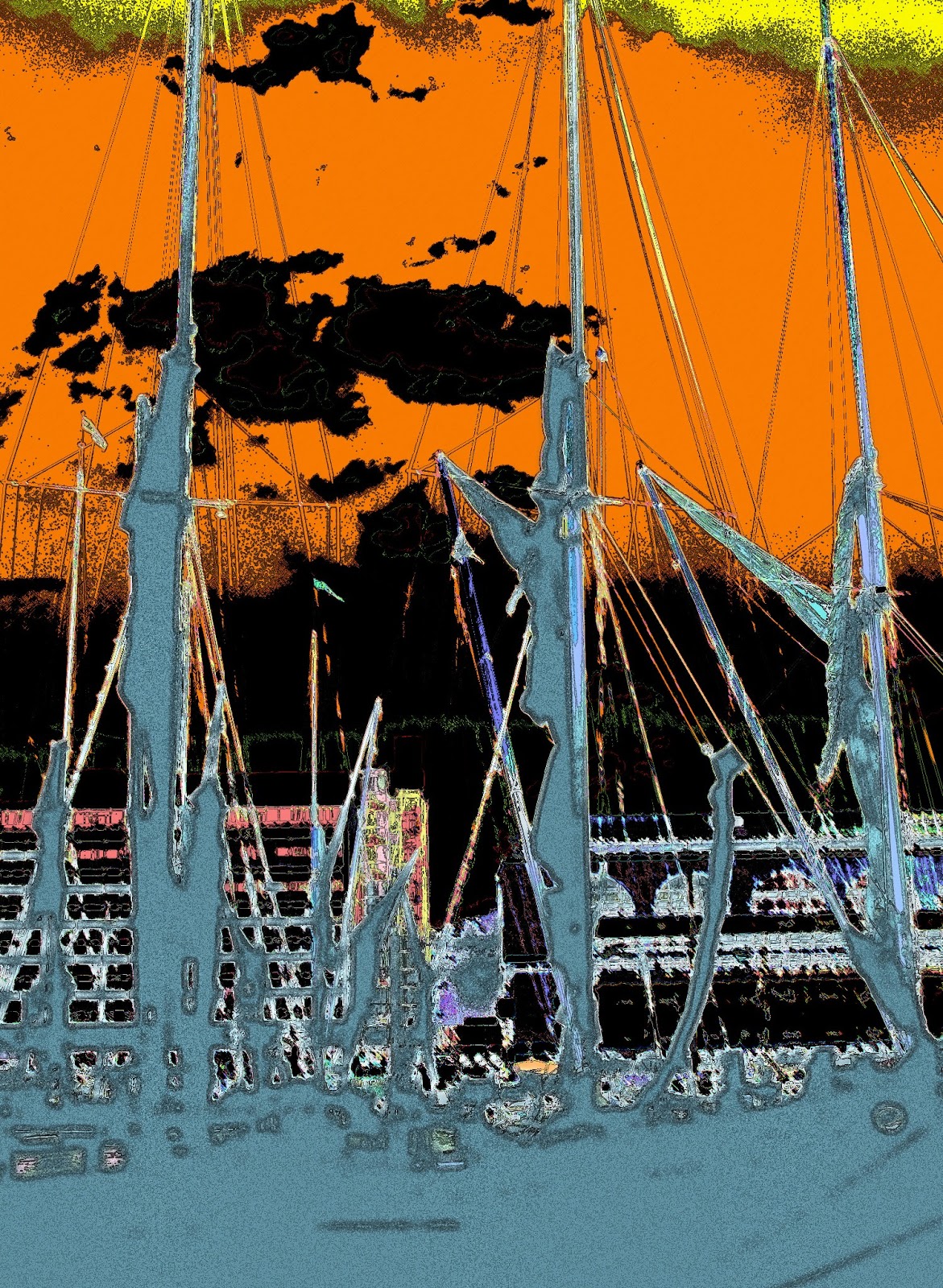 T S Eliot, with a little help from Ezra Pound (How many Americans does it take to write a poem? Answer: None: it's all in the mind), also paid some kind of respect to the oozing charms of the Thames in the Fire Sermon section of 'The Waste Land.' He quotes Spenser, among others, to conjure a deathly image of the river, which:


These bilious lines, with their coy reference to prophylactics, make it easier to see why:

"On Margate Sands.
I can connect

Not for Eliot the romance of the optimistic half full glass:  much more of through the glass dismally....


No, no, no! I was having a pleasant stroll.... My luncheon hopes may not have been fulfilled by Gandalf, or Widow Twanky, but my head was full of dreams. I sing some lines of Ewan MacColl's beautiful song, its  title unceremoniously filched from Spenser, to take away the desultory sex of darkest Eliot:

"I met my girl at Woolwich Pier


Beneath the big cranes standing
And oh, the love I felt for her
It passed all understanding

Took her sailing on the river
Flow sweet river, flow
London town was mine to give her
Sweet Thames flow softly"
....


The breeze freshens; shrouds clip against masts in Katherine's dock; I smell the presence of eels as the tide ebbs. The elemental symbolism of a mighty river shrugging its shoulders at me deflates my inner concerns. The echoes of all poets conflate into celebrations of days like these, where thought and inaction fuse in pleasure.


"Swift the Thames runs to the sea,


Bearing ships and part of me,
Sweet Thames flow softly....."