What is this life? 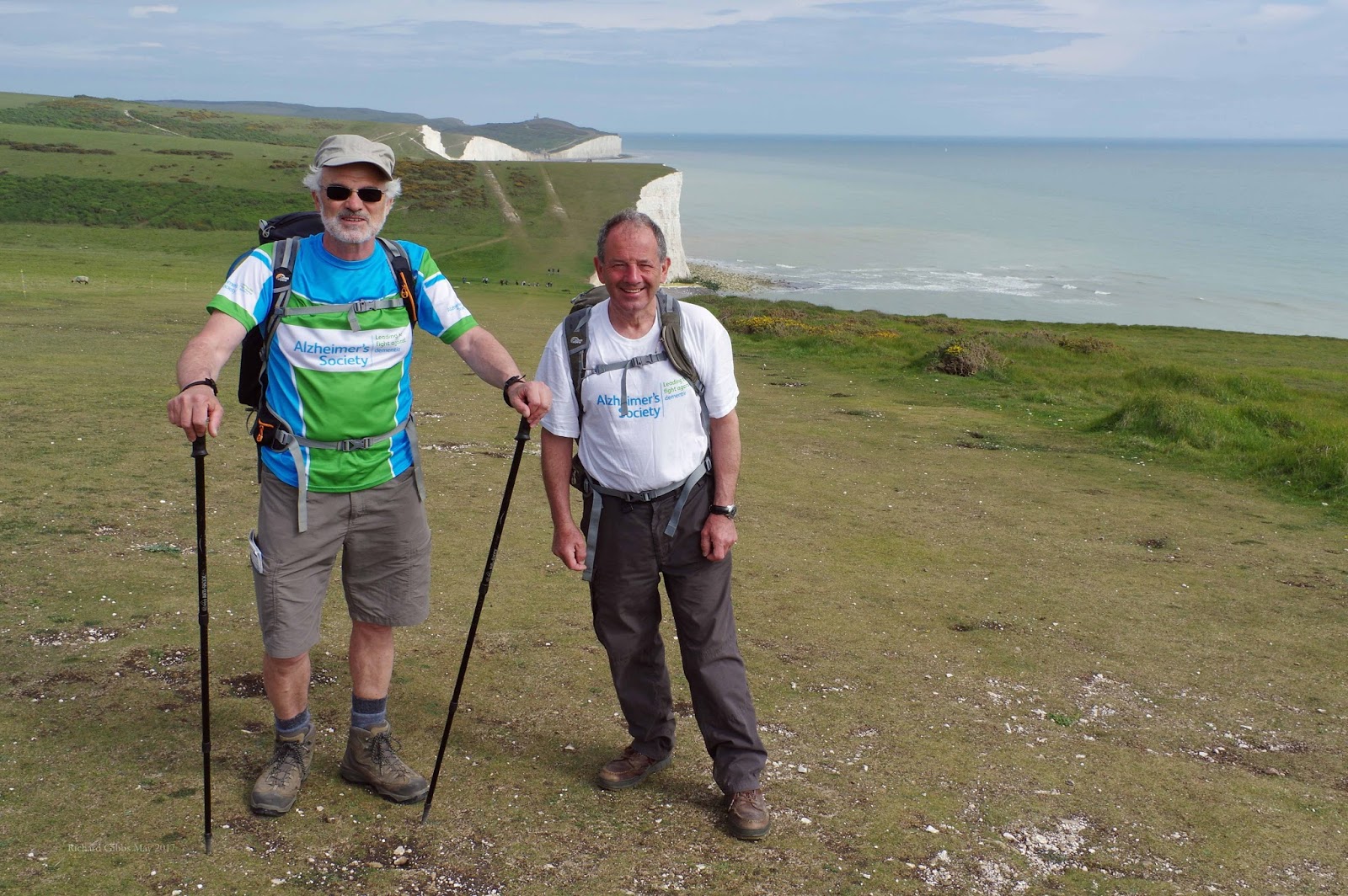 WHAT is this life if, full of care,
We have no time to stand and stare?—

No time to stand beneath the boughs,
And stare as long as sheep and cows: 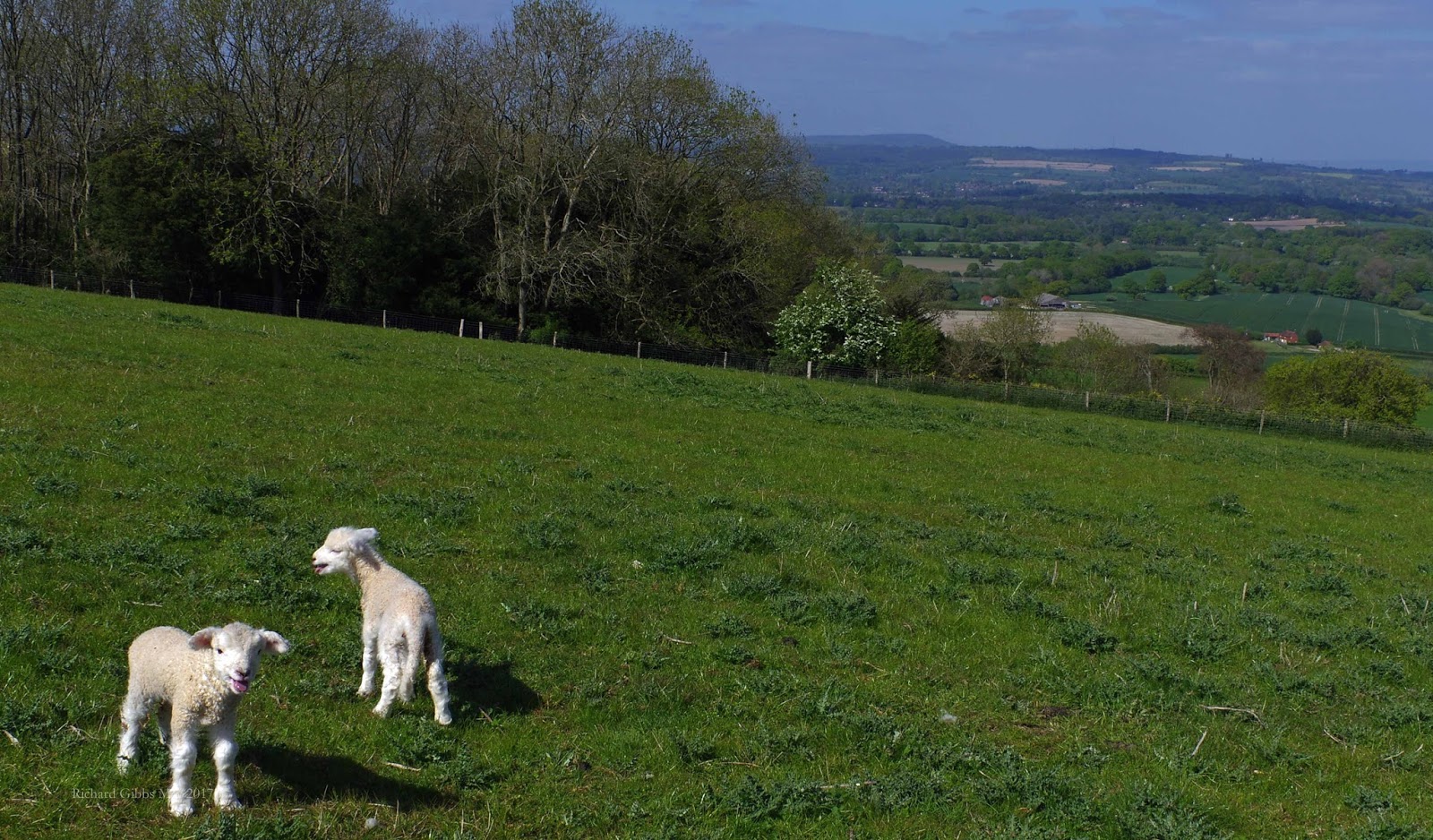 I have been away.  Wandering the hills of my past.

And while I was away, Amanda had two cheques returned as she had changed the dates from 2016 to 2017 without initialling the changes and the bank had rejected them.  I tried to explain that all she had to do was to write her initials by the changes and return the cheques.  But this was hard for her to understand.  As I repeatedly tried to explain, show, clarify, demonstrate, elucidate, unravel and decode the simple addition of a signature or initials to each cheque next to the offending correction, she, and I, became increasingly frustrated, which rather spoiled our morning…..

This, sadly, is what dementia does. 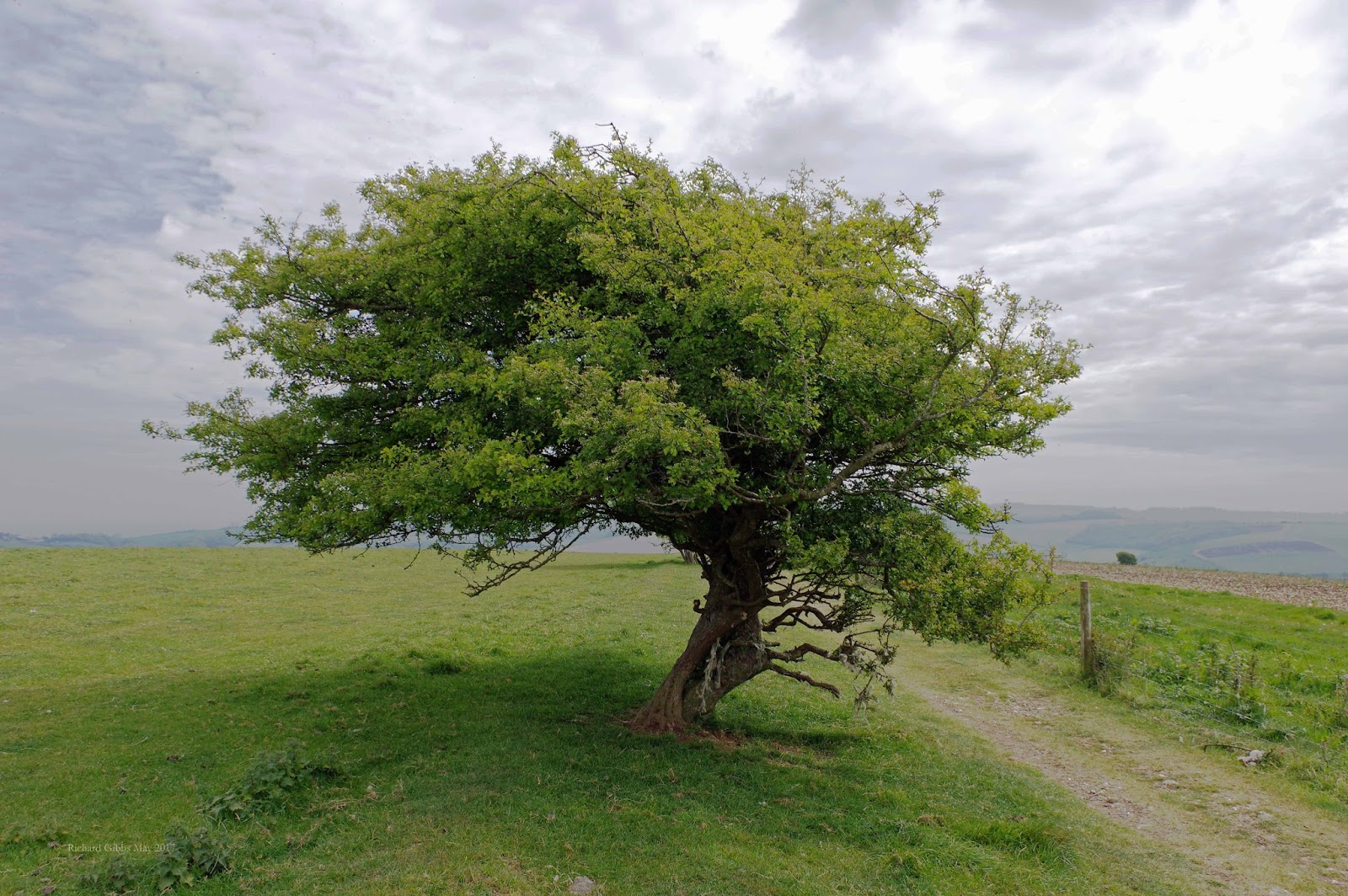 This, sadly, is why I have been away, as in my absence I have walked the 100 mile South Downs Way, from Winchester to Eastbourne - which includes  4,150 metres (13,620 feet) of ascent and descent (not including leaving the way to find accommodation or sustenance).  And I have walked this way, in the company of Ken, my Glaswegian friend and pace-setter, as a challenge to inspire friends and others to contribute to Alzheimer’s Society, to fund research into the various forms of dementia (including frontotemporal  https://www.alzheimers.org.uk/info/20007/types_of_dementia/11/frontotemporal_dementia which affects Amanda in the form of semantic dementia).  And, to make it a challenge worth supporting, or so I was advised, we did this in 5 days. 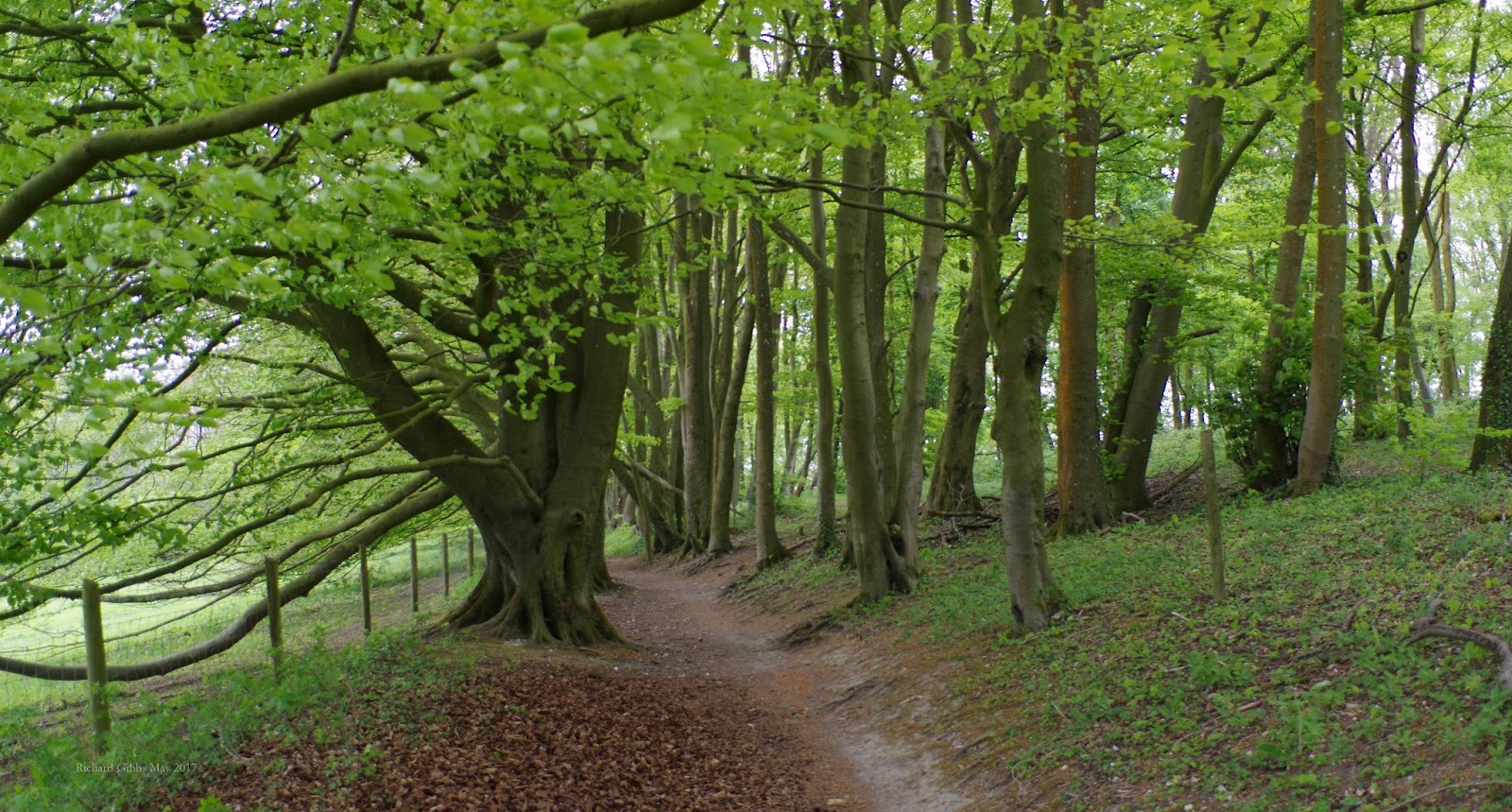 The norm, is, according to many reliable sources, ten to twelve walking days, which makes a lot of sense, as then you would have leisure to appreciate the scenery, to duck the storms, to lunch in rustic pub gardens, visit friends along the route and explore the villages, churches and castles that lie so temptingly near the feet of these rolling hills. 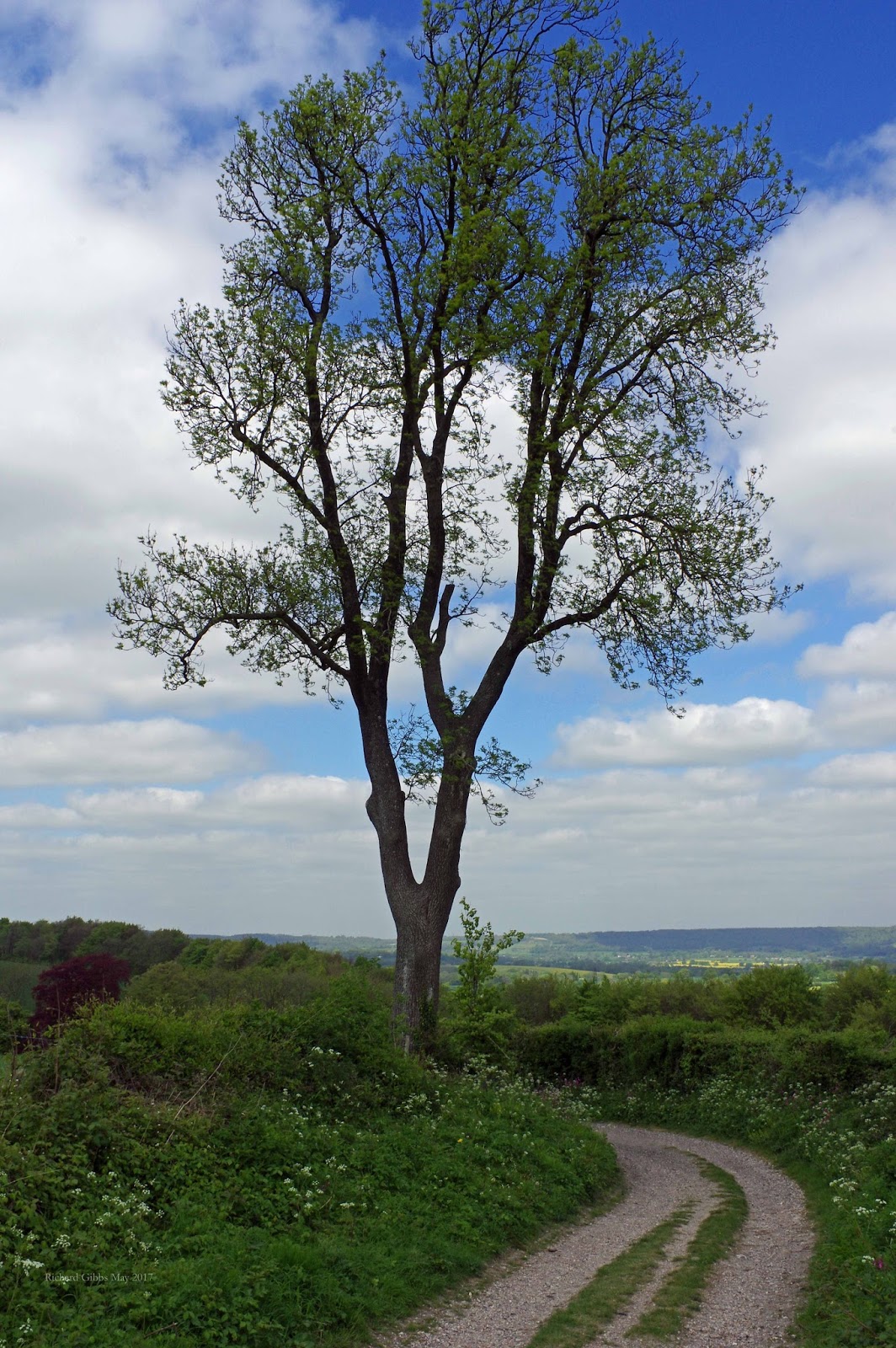 Alas, five days means no time to stop and stare.

No time to see, in broad daylight,
Streams full of stars, like skies at night: 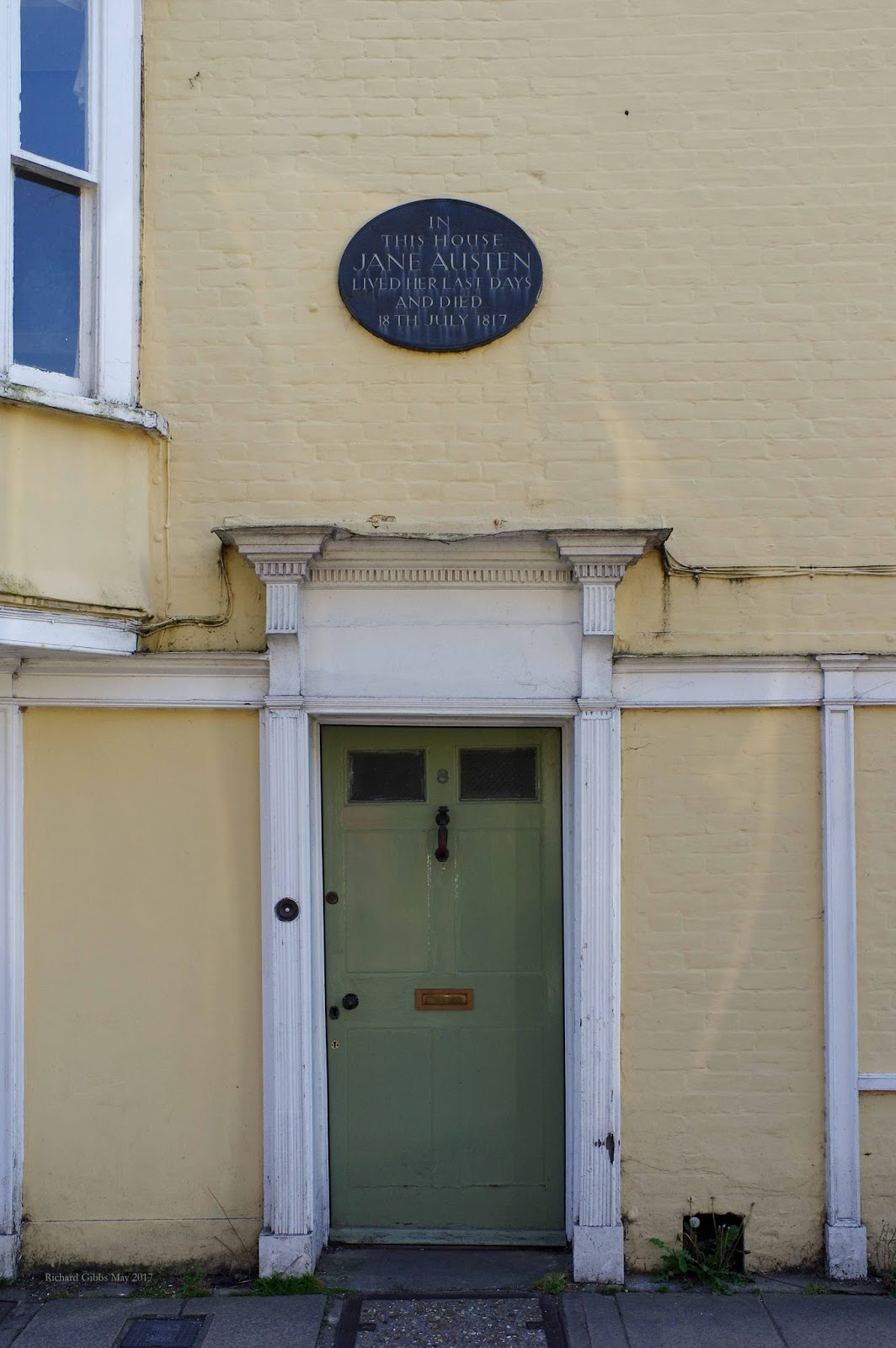 We stayed Sunday night in , hard by the house where Jane Austen died.  I hoped this was not an omen, and when the chef did not appear to cook breakfast at the Wykeham Arms I breathed more easily, suspecting we had been spared for the moment. 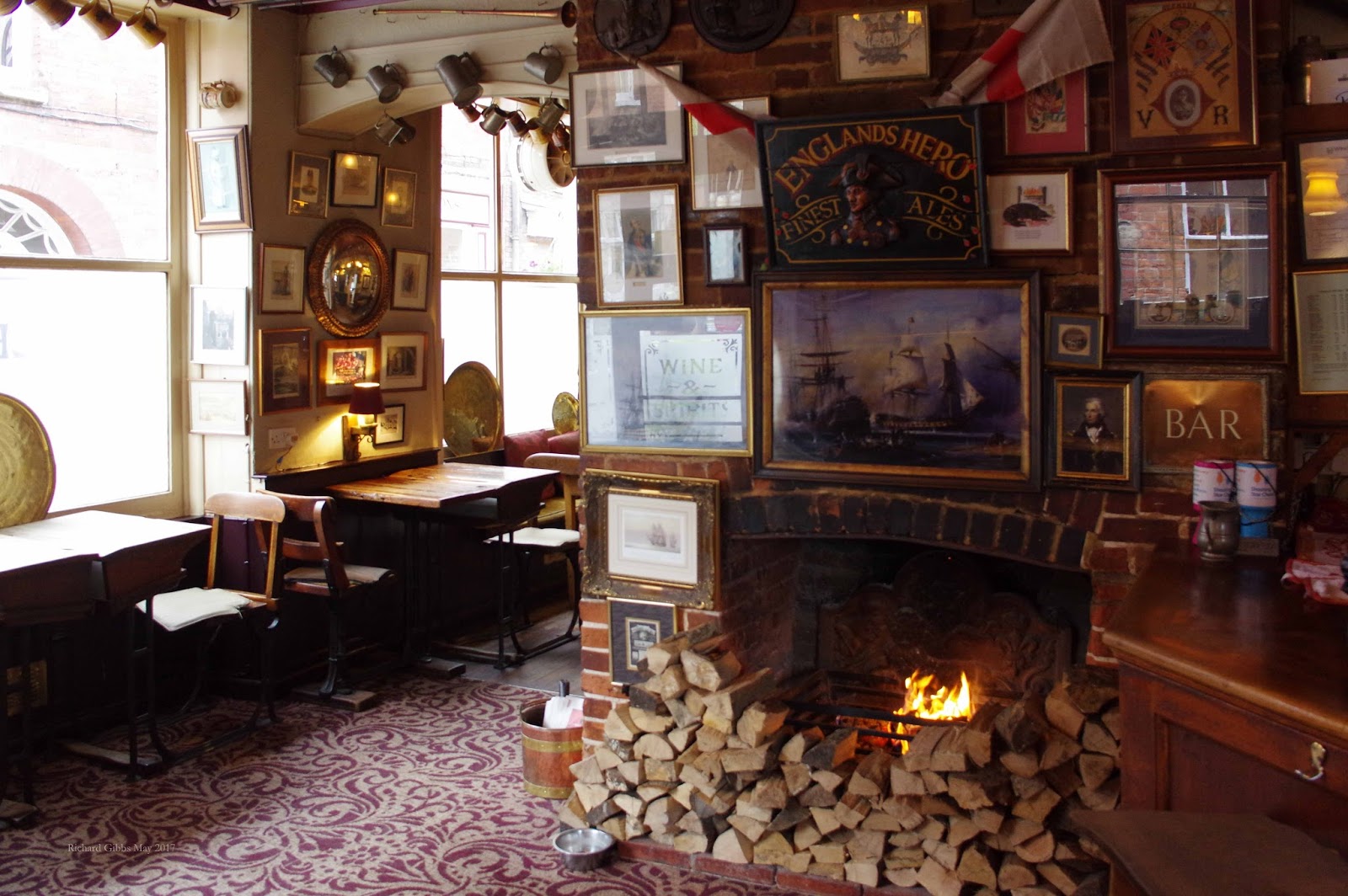 Then,  having whispered a prayer in the glorious Cathedral, 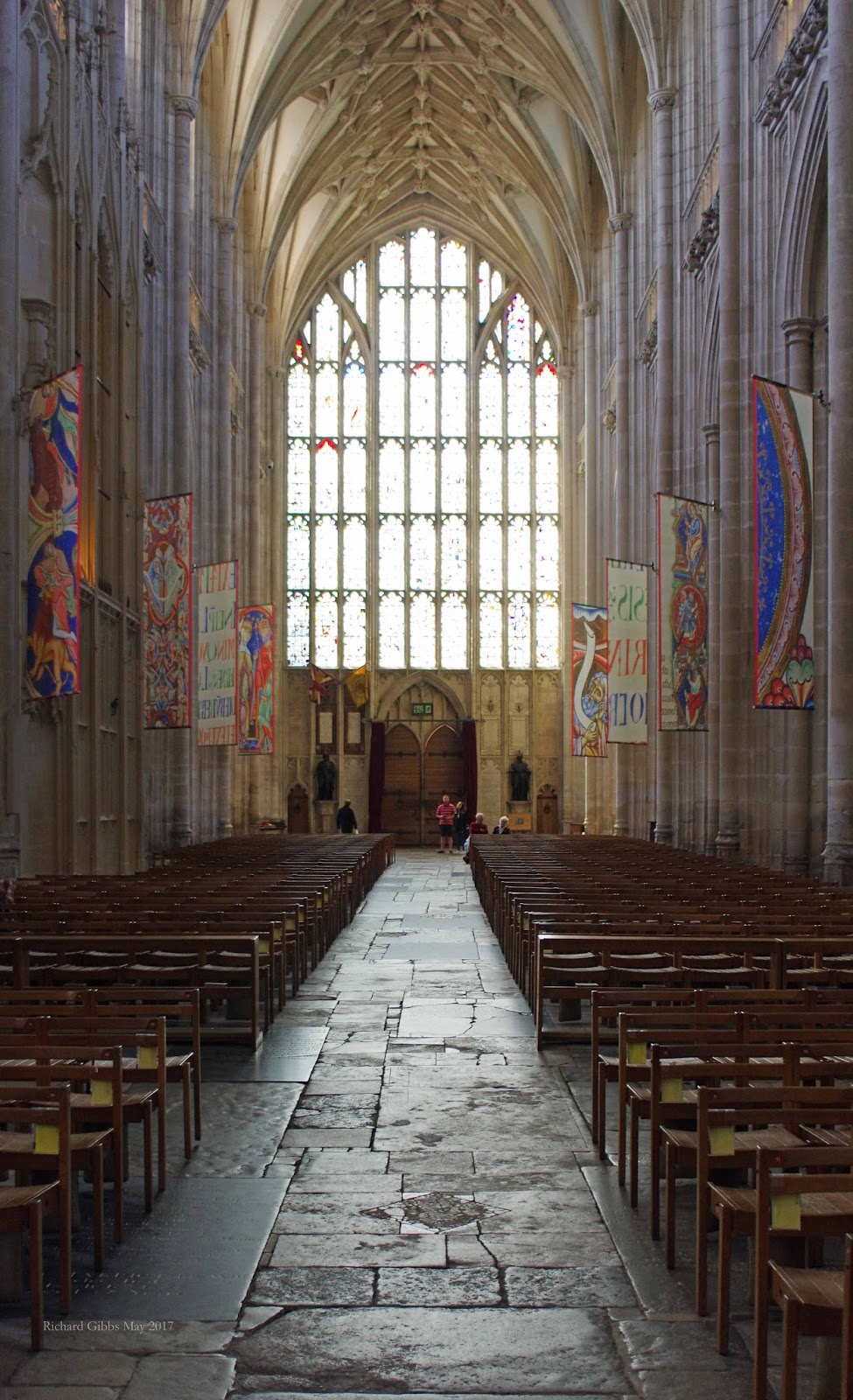 and raised our swords to mighty King Alfred, we set off. 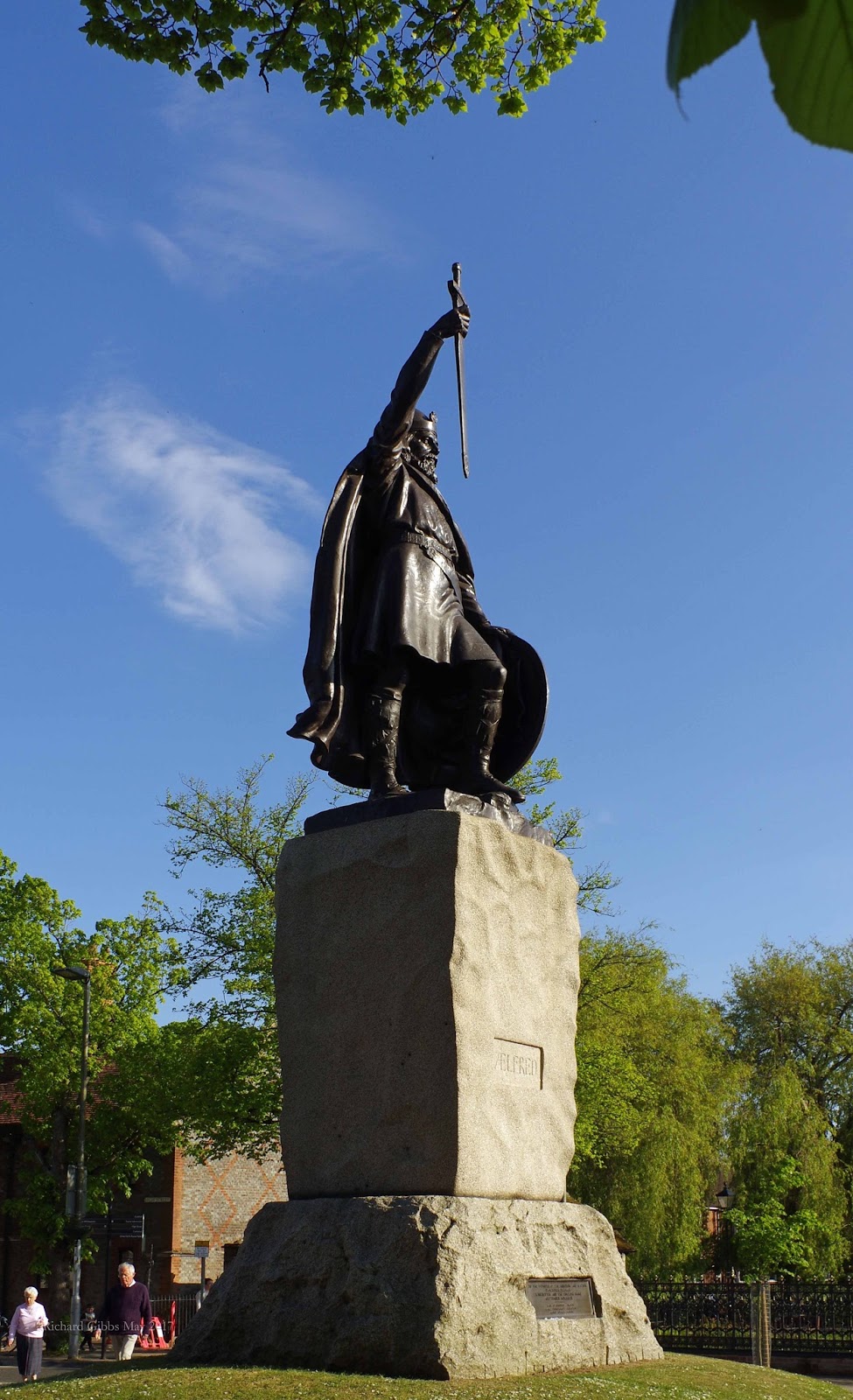 The first day’s walking took us out across the streaming M3 and into rural Hampshire.  We passed through the and then climbed Old Winchester Hill, which is topped by a magnificent Iron Age fort and is a Site of Special Scientific Interest.  It was breezy and fine, and the views southwards towards my birthplace at were breathtaking. 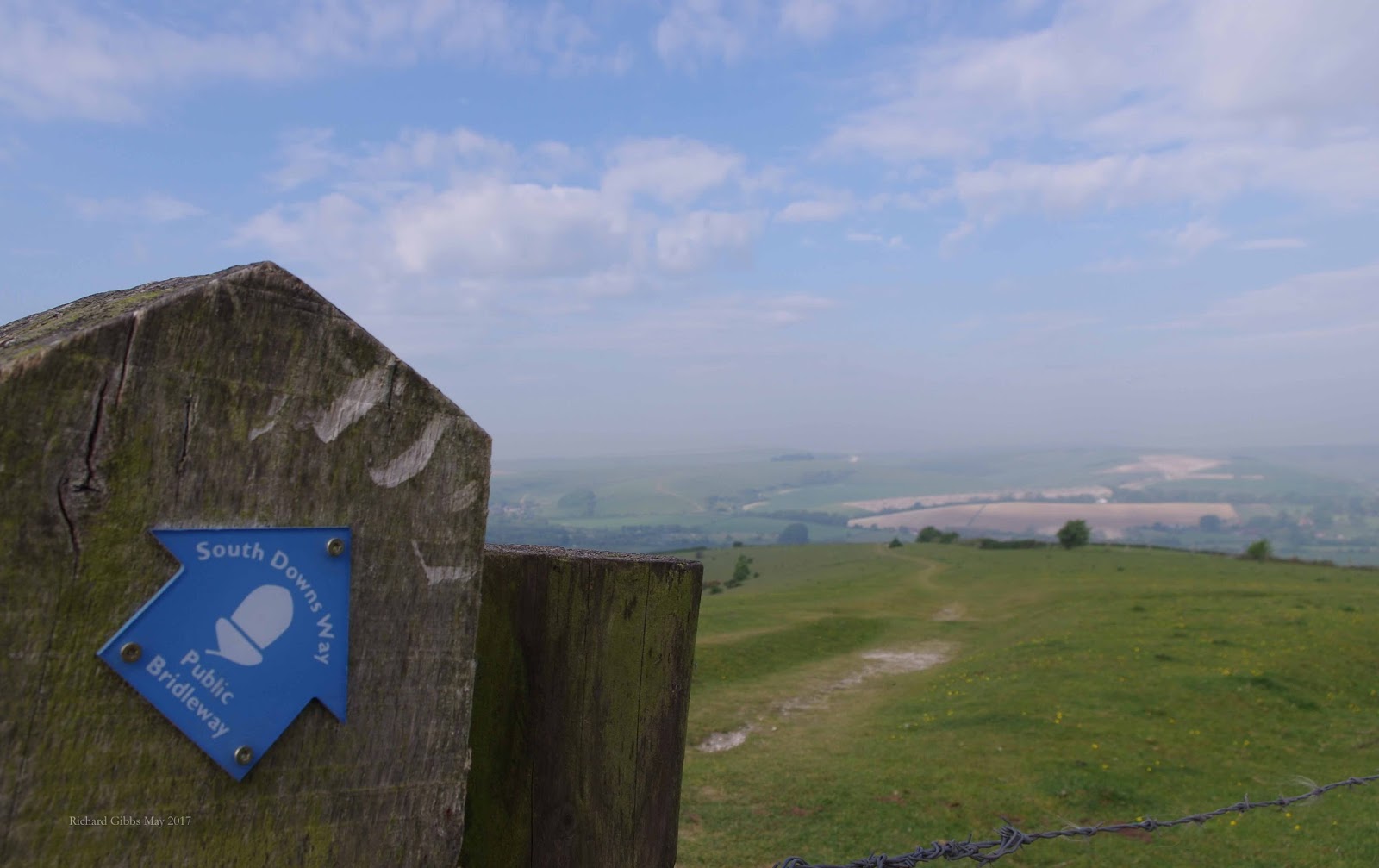 We then dropped down and left the trail to find our first night’s accommodation which was just out of the picturesque .  We dined at Ye Olde George Inn, and, as our hostess was unwell we breakfasted there as well, which was lovely, and then rejoined the way. 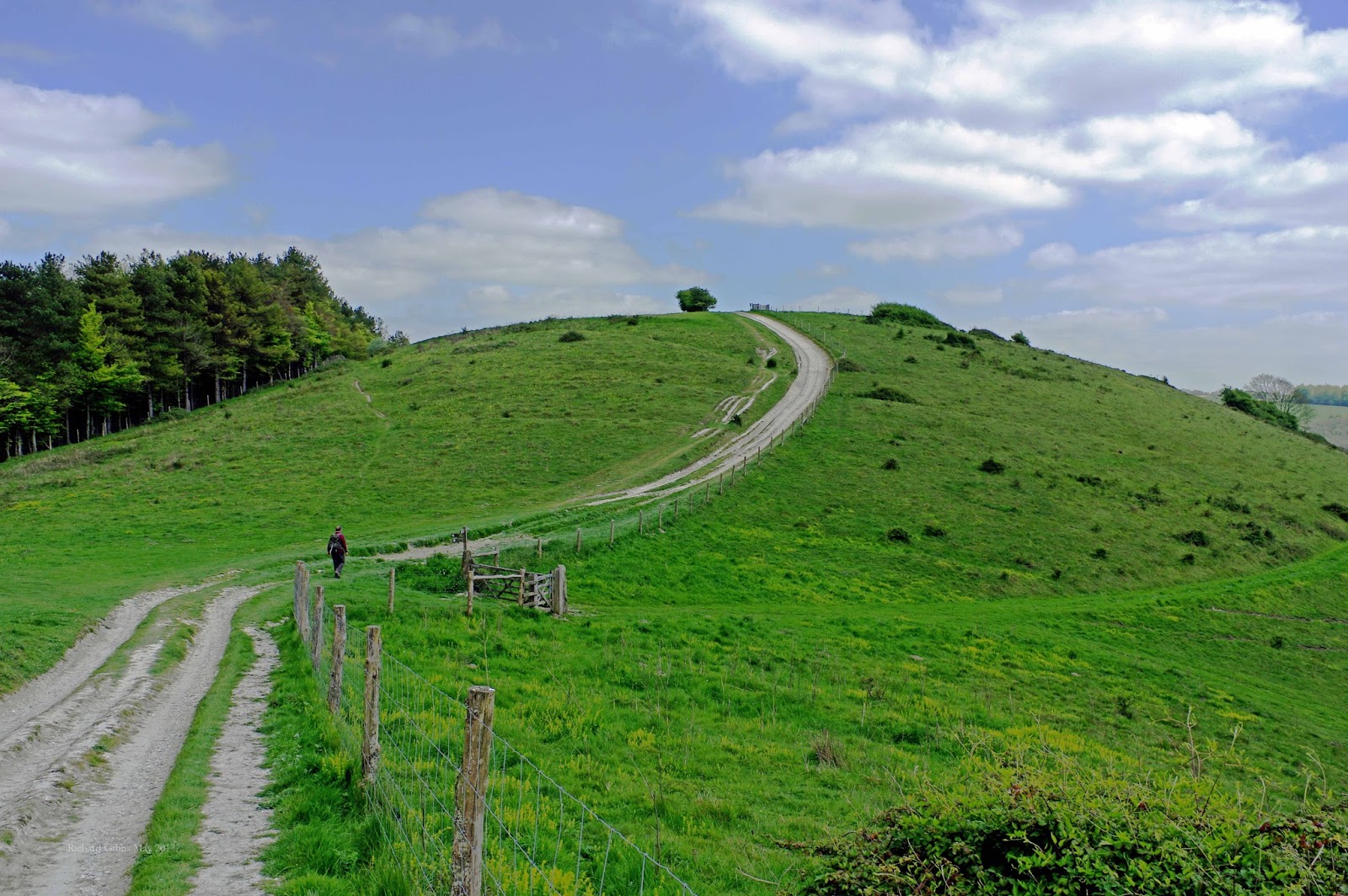 Up on the chalk downs there is a real sense of being away from it all.  From some of the highest viewpoints there are views of distant conurbations, such as Worthing, Brighton, and Newhaven, but much of the time we are enveloped in the English countryside, mostly tilled and trimmed by centuries of agriculture, though there are also woodlands and open grassy areas.

For about ten thousand years people have travelled these paths, and in places have left their traces in burial mounds or fortified enclosures.  Villages have ancient churches, some with Saxon or Norman origins; ruined castles, such as that at Bramber, and timber frame farmhouses, hold stories of the changes of our social and political past.

Unfortunately we have no time to stand and stare, so all the landscape and human endeavour and natural beauty and local interest begins to blur as we tread on, mile after mile, marching left, right, left, right, left…… left, and then skipping to the deuced rhythm of I had a good job when I left, but it served me jolly well right!  that I learned from Mary on the roads near Little Weighton.  The surface is dry, and hard, and feet and legs start to resist and react, though, fortunately, neither of us blister or cramp….

Night follows day; the thrush whistles out the light, and the robin starts us off again.  Day follows day.  Mile after mile.  I think of Harold’s army, trudging south to Pevensey from their northern actions, when the 200 miles between and or vice versa usually took two weeks;  in 1066 the Saxons managed 22 to 25 miles a day on the way to and then, having withstood Harald Hardrada, they had to return to face William of ….. 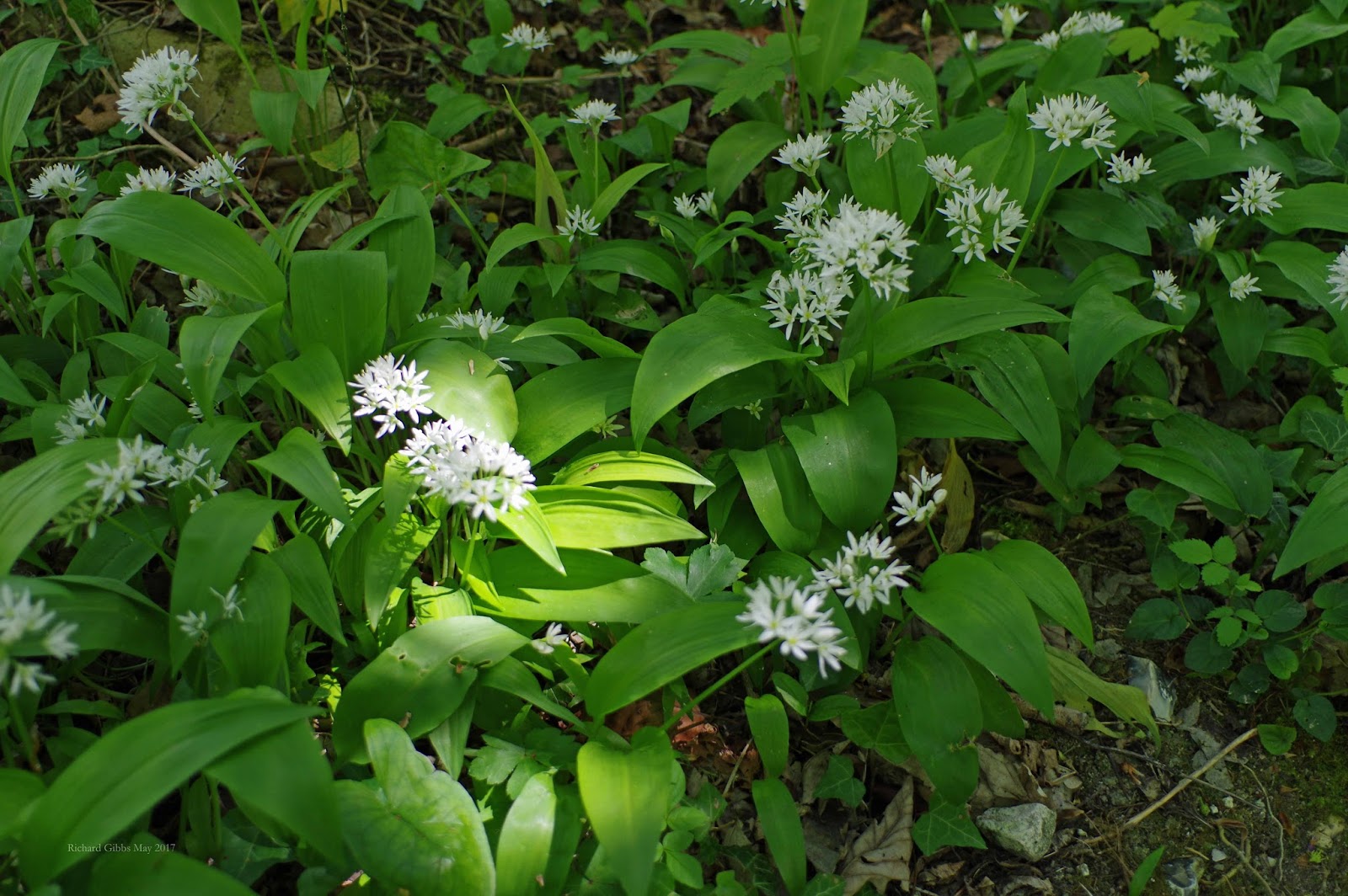 Though the way is quiet at this time of year, and we find immense bubbles of time when we are alone but for the sharp reprimands of birds who wish us away, we do meet fellow travellers.  Some, in flashes of youthful energy, or attempts to reclaim such, speed past, their lycra shimmering against the natural dyes of the hedgerows.  Others, like Frank, sprawl comfortably on a bank to rest the feet, while attempting to phone ahead for a camp site.

Everywhere, everyone, is kindness.  We hear no talk of elections, nor referenda.  When hosts and fellow walkers alike find we are walking for charity, their instinct is to donate.

We swap tales with hosts and companions, and at times enlist the support of sundry walkers to snap our tee shirts.

Chris, who is free to roam the national trails in his mid seventies since his beloved wife died of cancer four years ago, warns us of the ups and downs of the seven sisters.

Andrew, whose roots lie in the local chalk, has been exercising on these hills all his life.

Anna, who is scouting for locations for commercial shoots frames us against a view of , such as my mother might recognise from the war, were it not for the carbuncular block of flats between us and the pier. 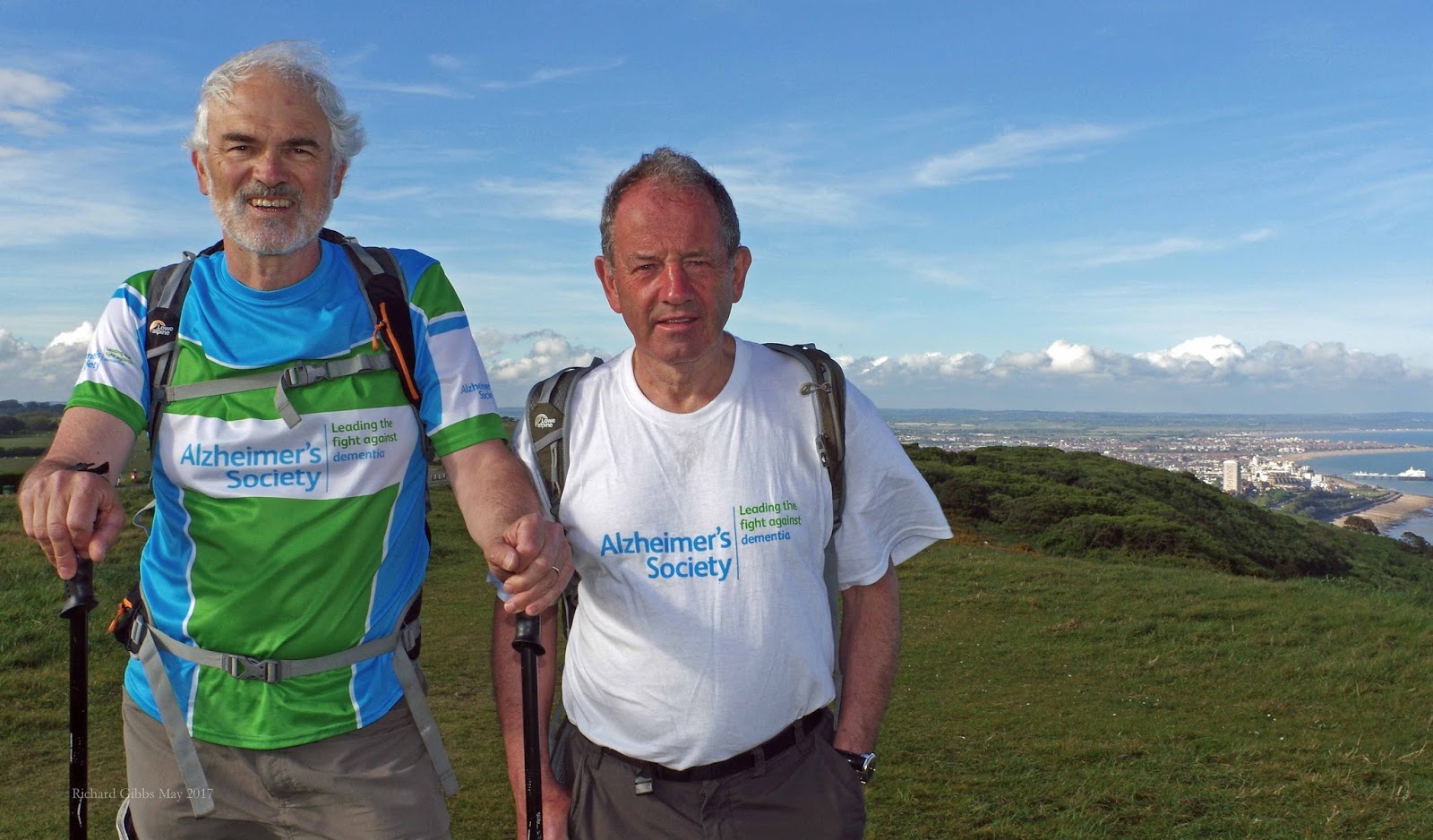 The way has touched a few historical nerves for me.  The distant sight of Portsmouth, not only reminds me of the days when as a child I watched Russian ships docking from our High Street flat, but also recalls our wedding, when Amanda and I visited David, the then Dean of Portsmouth, to finalise arrangements.  Later on signposts for Haywards Heath and Burgess Hill take me back to my father’s parents, and their haunts.  At the end of the trail we are not far from where my mother’s mother lived at the start of the war, and where my mother served in the WAAF, in mission control, plotting the whereabouts of Bomber Command. 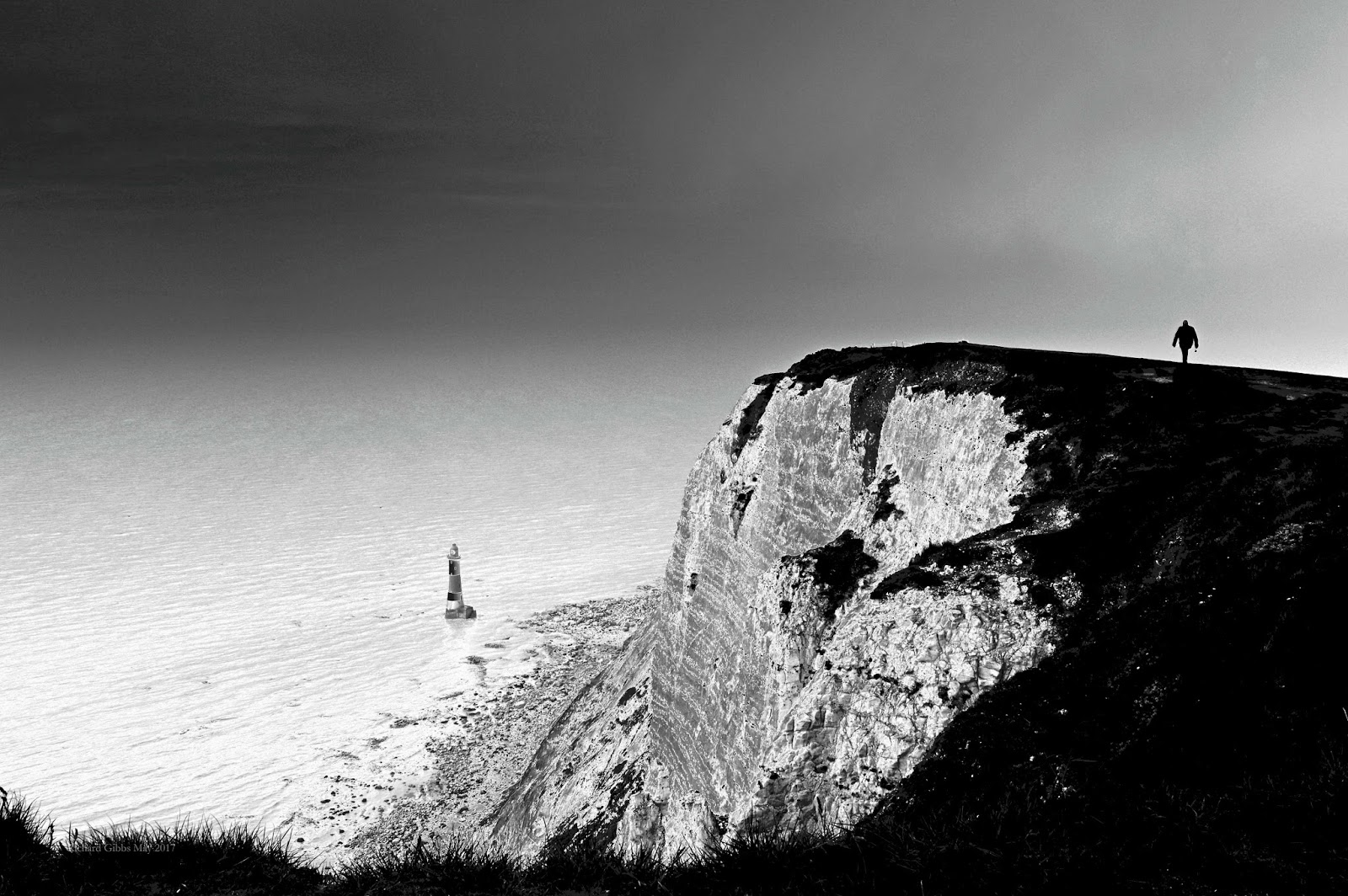 And, poignantly, we reach with helicopters and emergency services in peak action, scouring the sea at the shoreline, and driving iron stakes into the cliff top to secure abseil ropes.  It was here a little less than twenty years ago that my little cousin Isobel found her peace, and all the activity is something of a shock after the days of quiet walking.  A paramedic asks if I am all right, a kind but somehow bittersweet enquiry.  I stumble over Edgar’s words to his blinded father in Act 4, scene 6, of King Lear:

Come on, sir; here's the place: stand still. How fearful
And dizzy 'tis, to cast one's eyes so low!
The crows and choughs that wing the midway air
Show scarce so gross as beetles…..

And he concludes, as I would:

I'll look no more;
Lest my brain turn, and the deficient sight
Topple down headlong.

Worth their salt, 's white cliffs;

And rounded her ode with:

in painting, poem, play, in song;
something fair and strong implied in
chalk,
what we might wish ourselves. 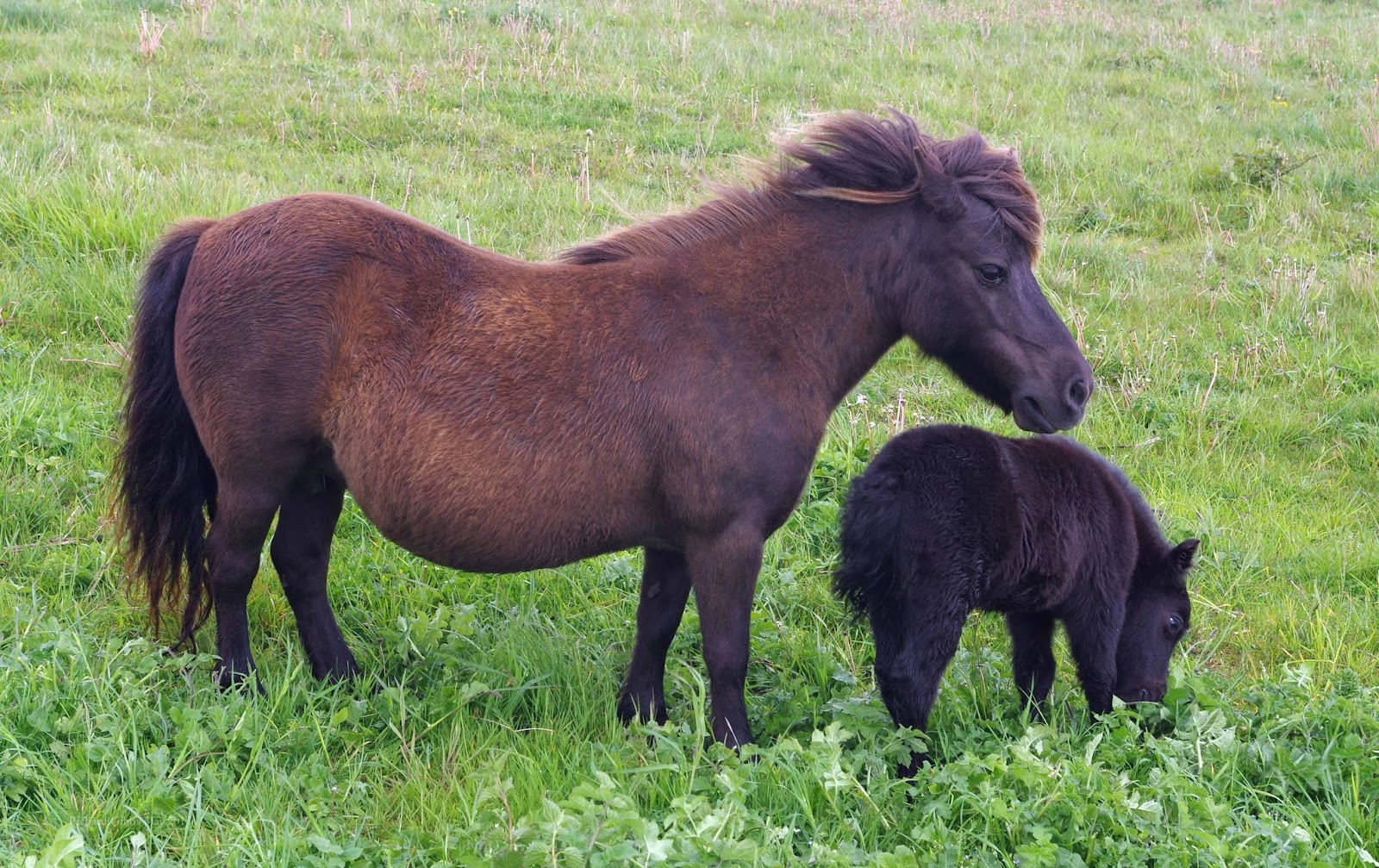 Stretched, strained, cramped and stiff we pass on and reach the 100th milestone at the edge of town.  A pint of ’s Best in the busy Pilot Inn, and then a lift to our resting place, and we enter our recovery period.

With the joy of retrospect it has been a wonderful walk.  A hundred miles of the best of ’s chalk lands, hills blest with lark song and butterfly dust.  And, with the ever-surprising support of friends and acquaintances from the now and the then (even some of my students from forty or so years ago!) we have been walking at a rate of at least £40 per mile, totally over £4,000, (and perhaps yet more?) raised in support of Alzheimer’s Society.

Thank you Ken, for your patience and pace.  Thank you Penny for seeing us to the start and collecting us at the finish.  Thank you all who have contributed to the funds which I hope may eventually result in managing or even curing this strange blight on our minds we call dementia. 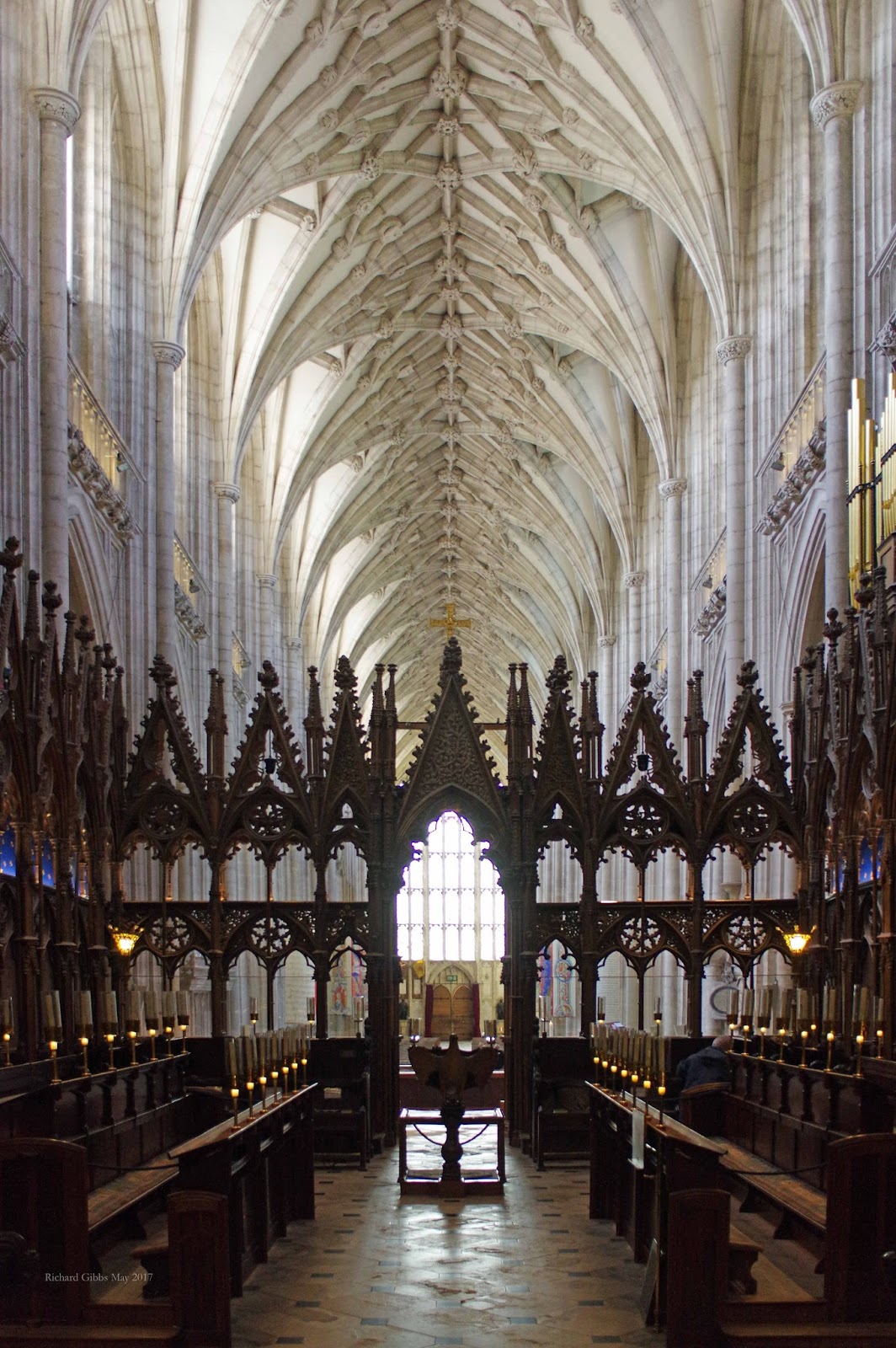 And thank you Amanda for everything:

Perverse and foolish oft I strayed,
But yet in love he sought me,
And on his shoulder gently laid,
And home, rejoicing, brought me. I am home now, resting and recovering.  It was a challenge, but it was great.  I loved the open skies and grassy folds.  It was really worth it.

This trek was organised by Paul Allshire of Discovery Walking, to whom we also owe much gratitude, at  www.southdownsdiscovery.com

No time to turn at Beauty's glance,
And watch her feet, how they can dance:

No time to wait till her mouth can
Enrich that smile her eyes began?

A poor life this if, full of care,
We have no time to stand and stare.

And, having read this piece, should you wish to contribute to Alzheimer’s Society,
please go to: 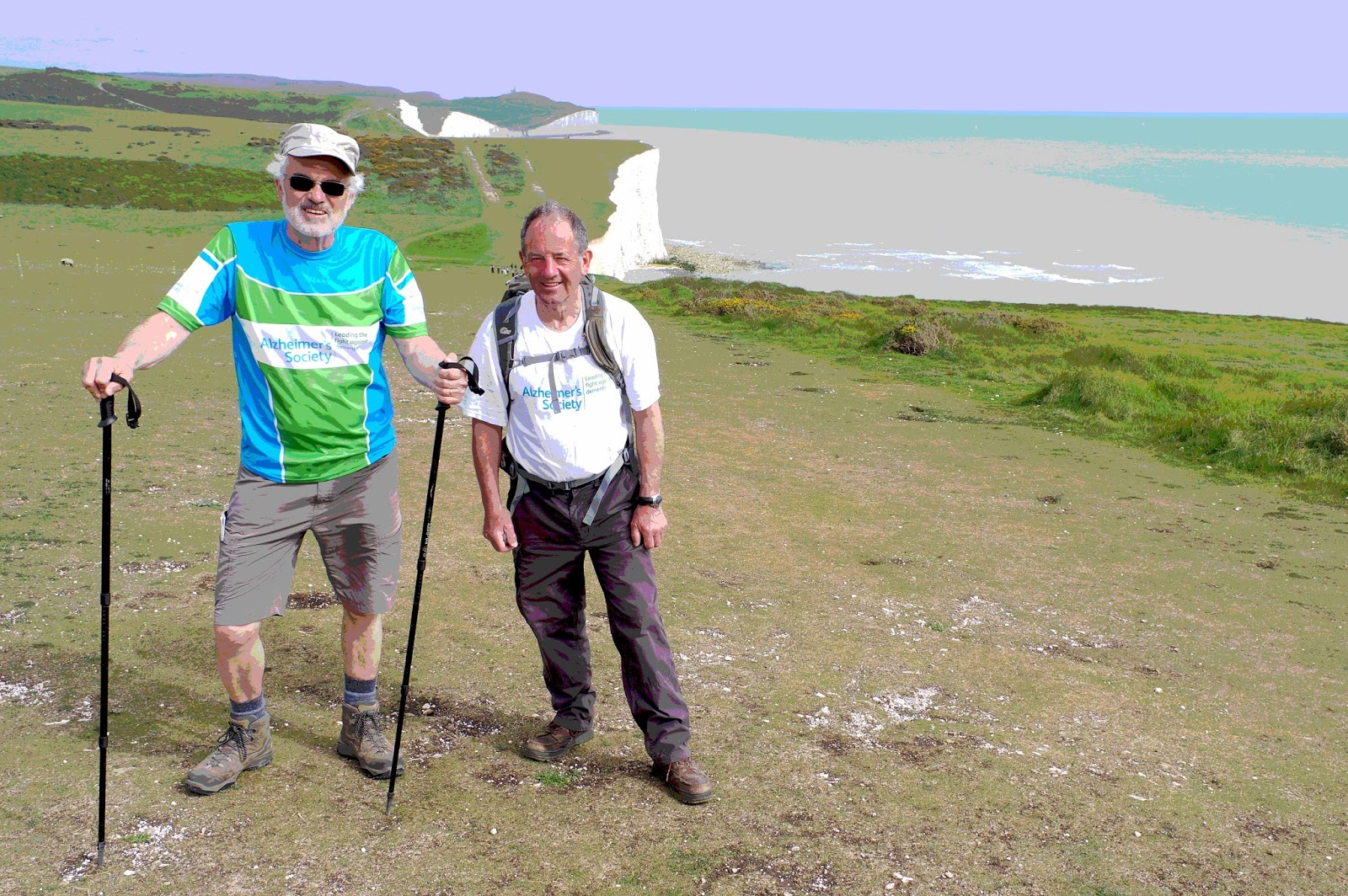