The plan was simple, and inspiring. Having had a perfect day last September walking a gentle 26 miles across Salisbury Plain from Stonehenge to Avebury and raising about £2,000 for the Alzheimer's Society, a new challenge would be straightforward. This one was advertised as being only 23 miles! And Hadrian's Wall! I had seen bits of it before, taking my daughters to stunning Birdoswald Fort some years ago, and admiring the Roman toilets at Housesteads years before that, but I had never walked the trail..... And in August..... The weather would be fine.....

So, inscription fee paid, and fundraising under way, training began.

But I had not taken two things into account.  For one, Hadrian's Wall was deliberately built across difficult, undulating, rocky terrain in a part of not known for its gentleness.  In fact, taking into account the rise and fall in altitude, this was not 23 miles but actually over 26.  And, for two, anyone who expects wall to wall fine weather in the in summer is, frankly, barmy.  The weather had been , and Hadrian would have felt at home here in July, but the forecast for August 2nd was orange.  High winds and torrential rain due to hit about the time we started and stay there all day.....

So, having pinched my feet in ultimate training, it was with a car load of trepidation that I got stuck on the M6 northbound, aiming for base camp at Bush Nook Guest House (which, by the by, is to be heartily recommended) at Upper Denton (the birthplace of St Patrick).  Storm clouds were gathering, and as I did a quick reconnoitre of the proposed route, my resolve began to quaver.  Two crows, the ghosts of Roman sentries at Housesteads, warned me of the ordeal to come.

Over supper at Bush Nook, however, there was solace in the camaraderie.  At least I was not alone, and good cheer and a general scepticism about fitness and training made me feel a little better, though I still felt the weight of the c£1250 sponsorship that was riding on me completing the course. 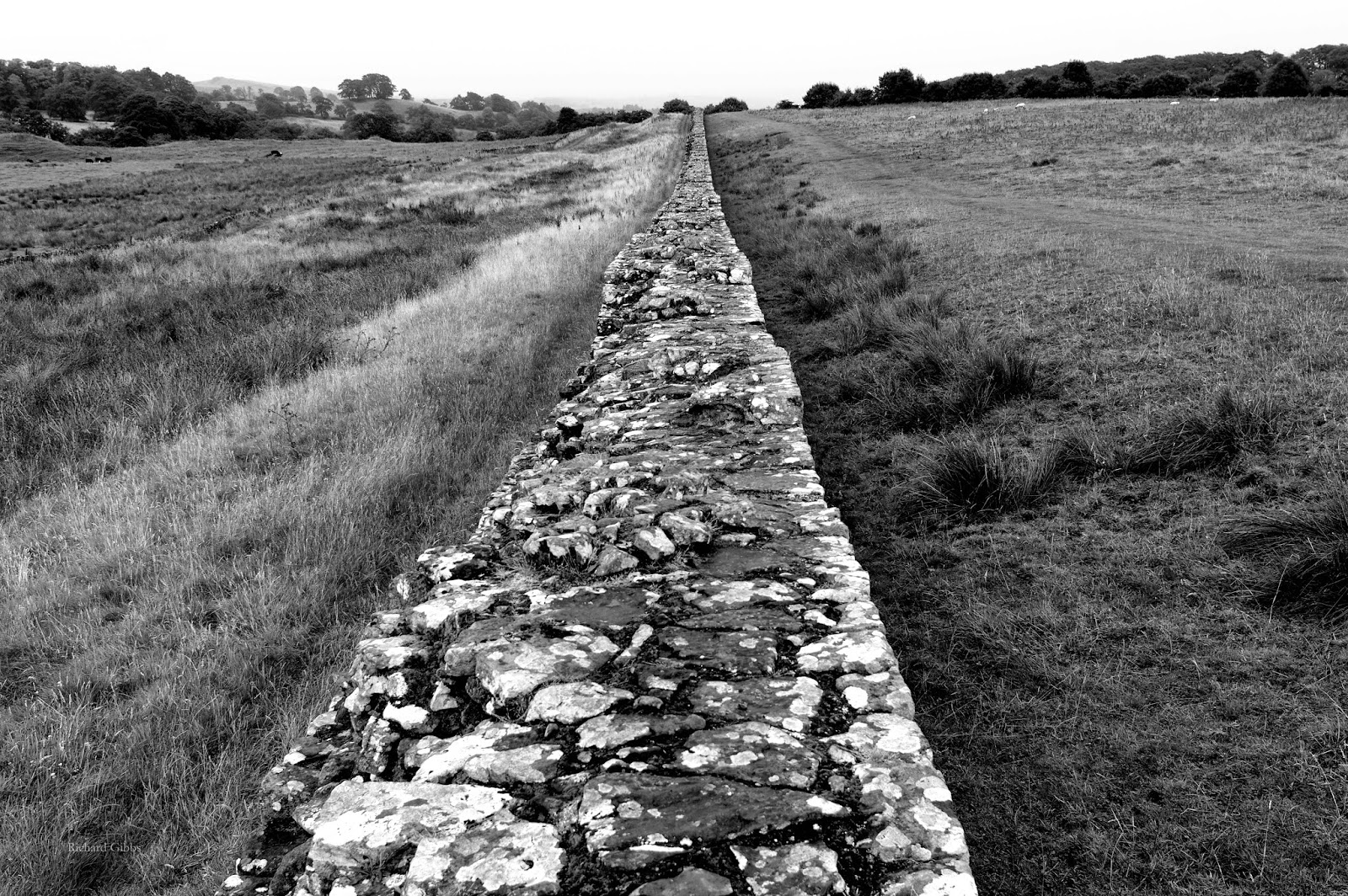 Alarm set for five.  A hurried breakfast of super-carbohydrate and coffee, a quick drive to Lanercost Priory, registration and briefing. 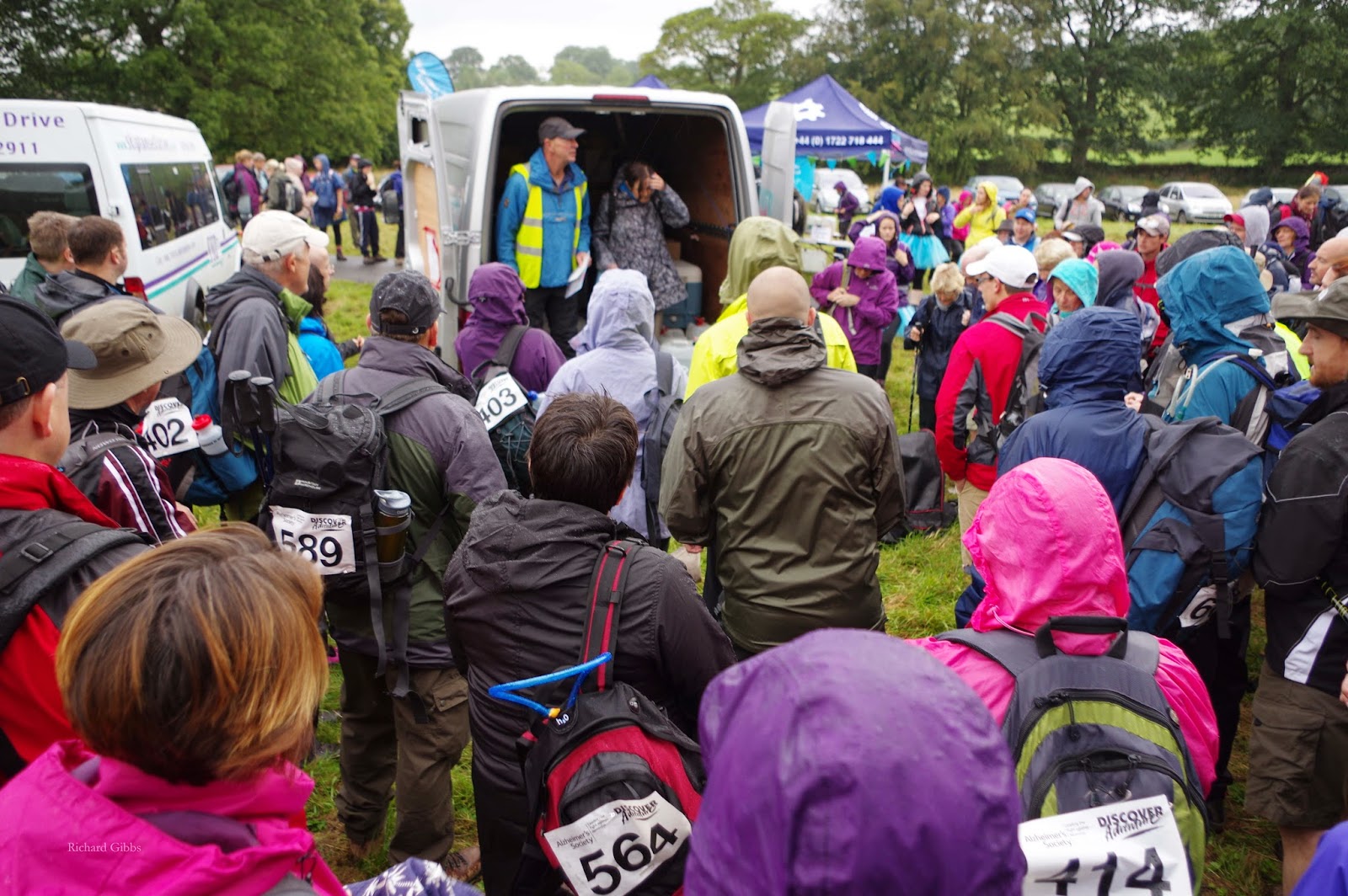 Then everyone on the buses, 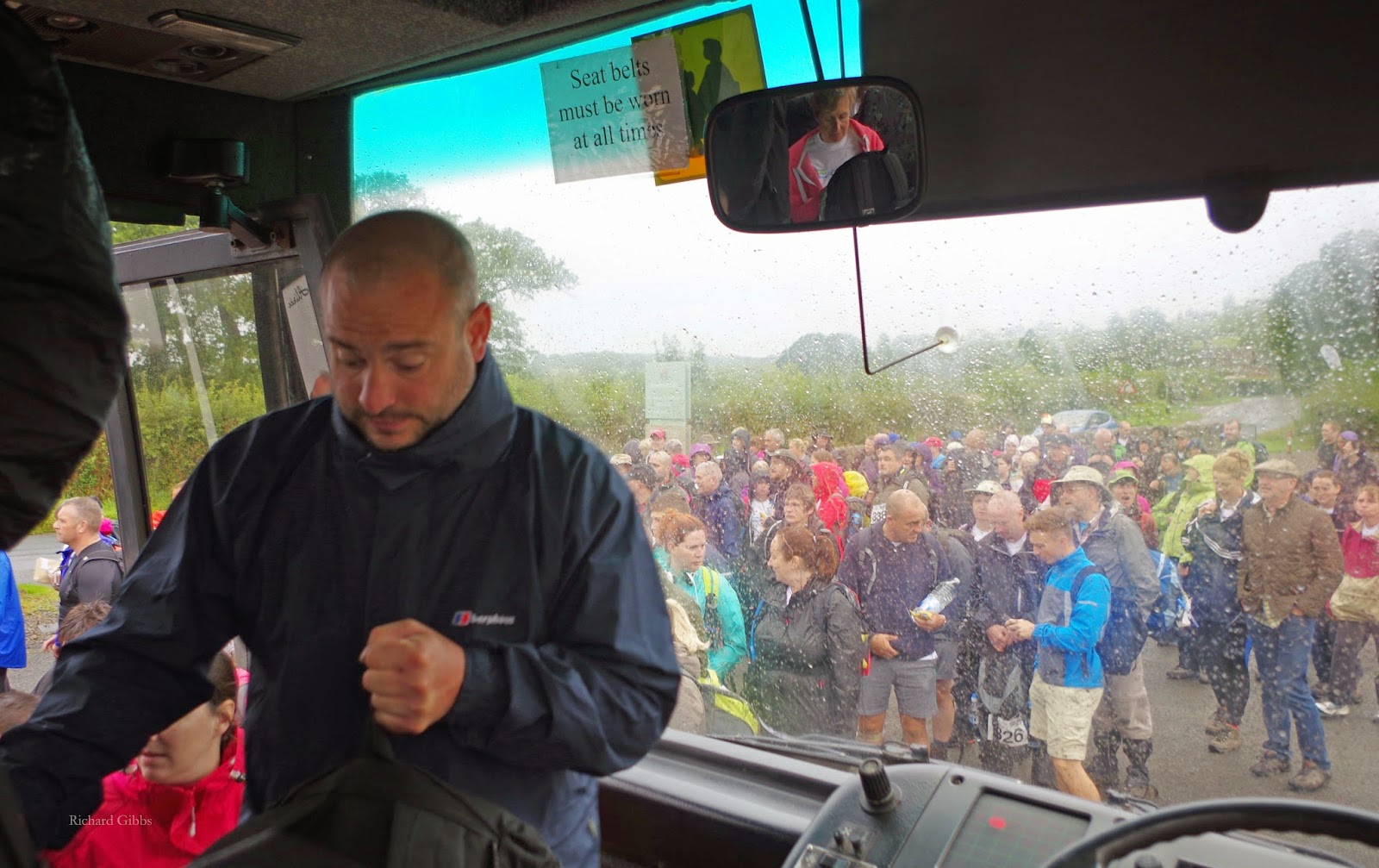 and a forty minute transfer through the mist and rain to Brocolitia (the place of badgers), where we sacrifice a sheep at the Mithraeum before, deep breath, we start heading west, following Hadrian's brilliant idea of building a wall to keep out the barbarians.  What was it for?  The work involved would have been immense, but the imagination that came up with it - without the benefit of aerial surveys, JCBs and huge trucks, the concept itself was amazing. 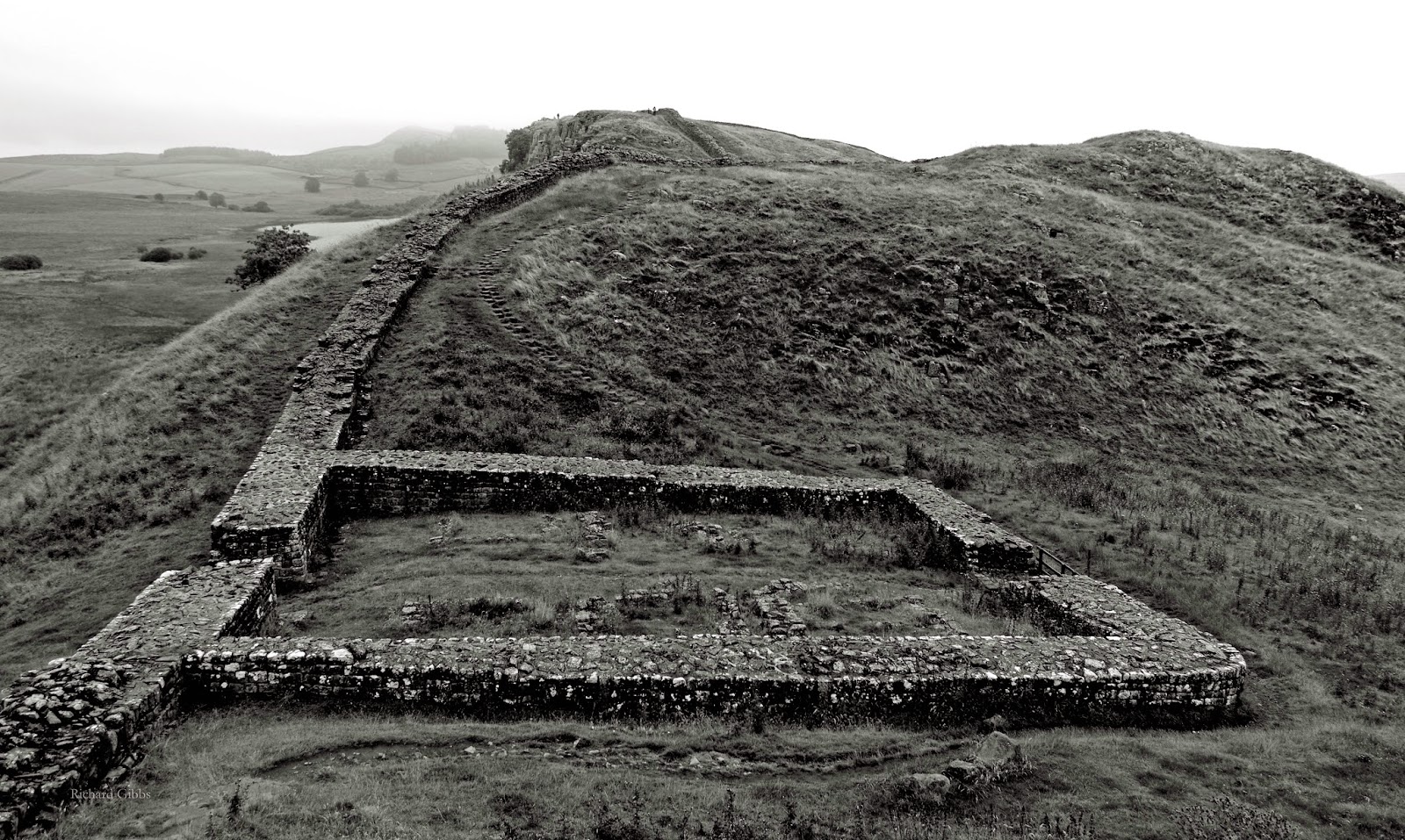 It was in the year 122AD, when Hadrian visited and reviewed the extent and limits of his empire, that he gave the order to build about 80 modern miles of (in some places) six-metre high wall from sea to sea, with a castle every roman mile (about 1,620 yards) and turrets in between.  In addition there were several major garrison forts and supply roads and support services to provide.

Some suggest it was a way of occupying the troops, though others will have it that it had a strategic importance of controlling those who would eventually become Scots (though years later the Antonine Wall was constructed some hundred miles to the north).....  Anyway, the project went ahead, and, given the assistance of three legions (about 15,000 men) it was operational within six years.

And it is still there!  Despite the efforts of the elements and the fact that a great deal of the stonework has gone into building roads, houses, barns and farm walls, the remains of castles, gateways and the wall itself, with the ditches on the south side (the Vallum) are still traceable, and in some parts, very clearly evident. 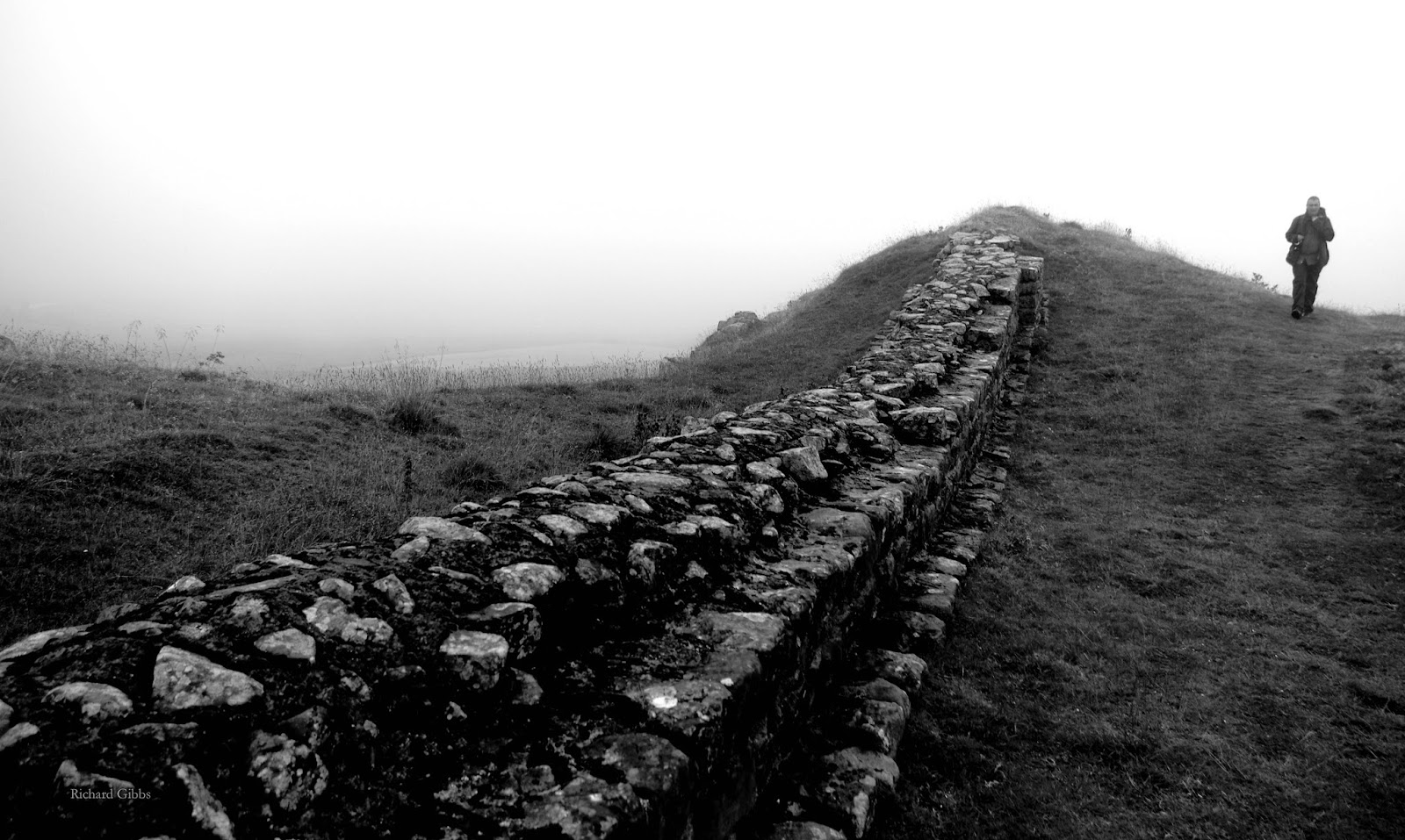 Our trek covered only a section of the full distance, but it allowed us to feel the power of the wall, and to be stretched by the physicality of it all. 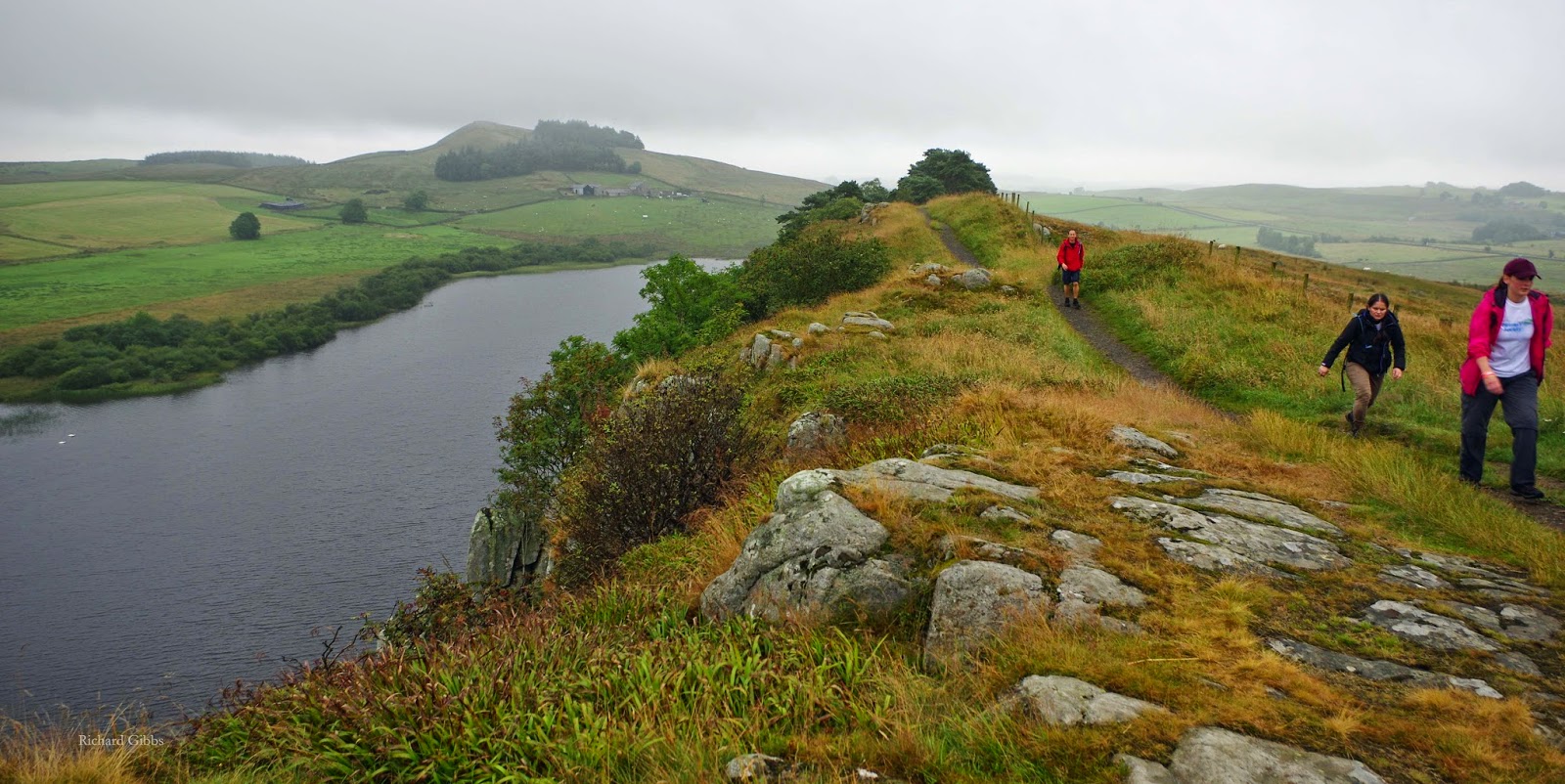 To the north were the wilds of Kielder and Wark Forests in the (the darkest place in ); to the south the valley of the South Tyne and fells of Northumberland and beyond.

Overhead clouds gathered and drizzled then showered then poured down on us. But the gales and torrential rain that was forecast held off, and, though eventually soaked through and smelling like sheep, two hundred and eighty fund-raisers soldiered on. 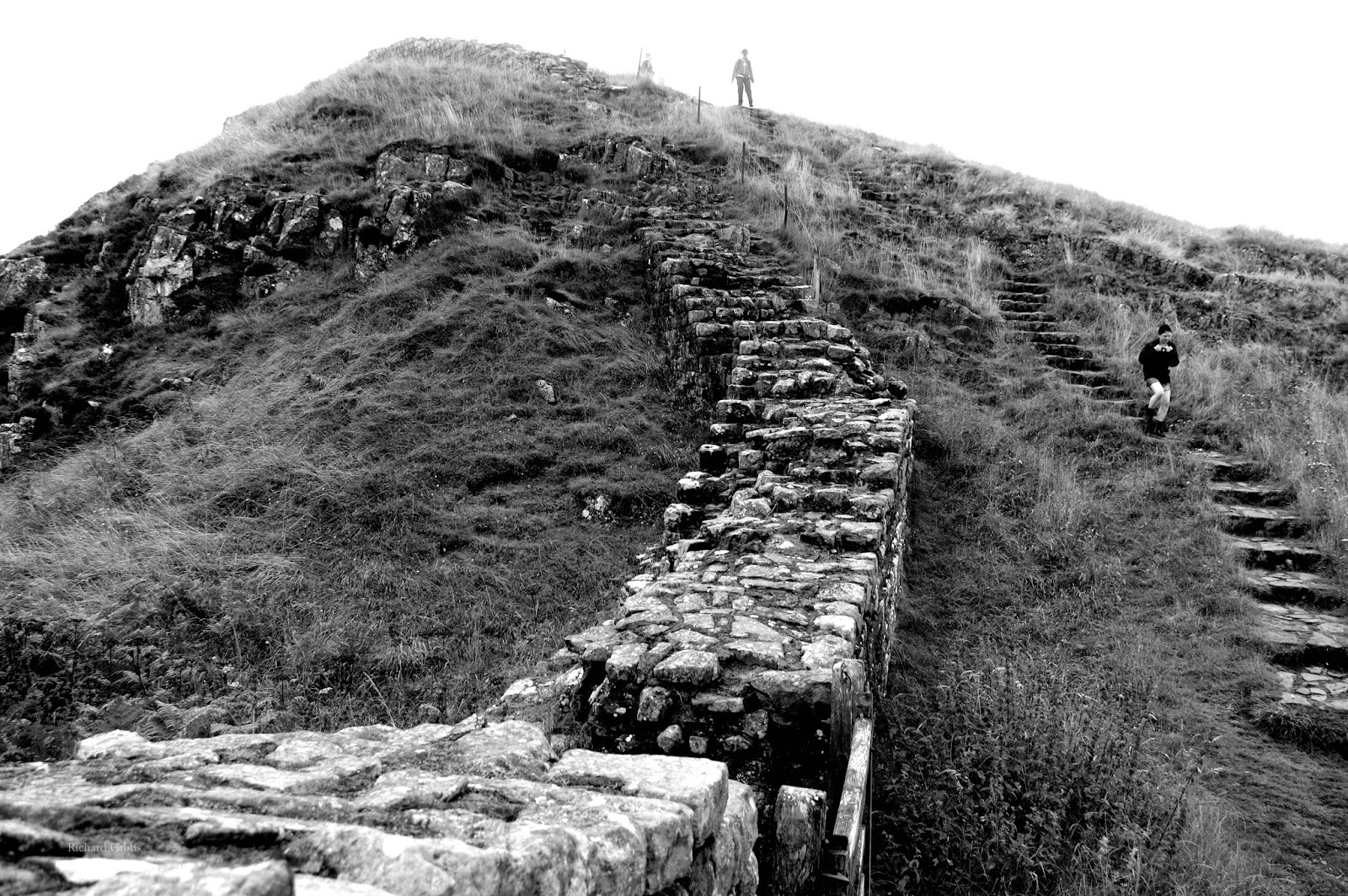 Some fell, literally slipping on the wet grass and uneven stones, some just fell by the wayside, understandably exhausted by the rigours of the undulations. 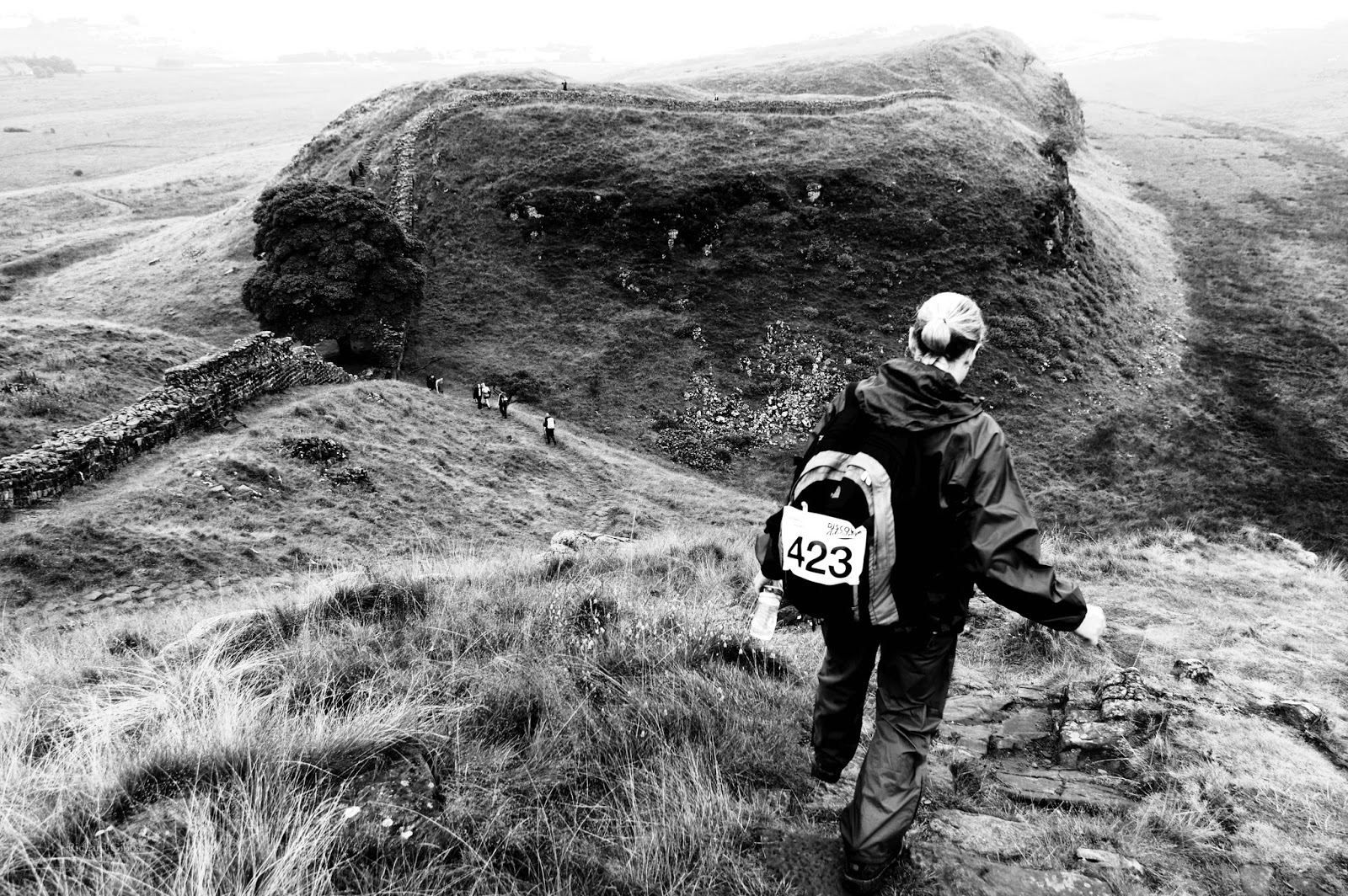 It was harder than I expected.  Though the weather was in a sense kind (it could have been too hot - it could have been a wash-out) my pack was heavy, my clothes were sodden, by boots squelched and my feet were sore and around about half way, where the going was toughest, my knees were creaking on the down paths and my legs feebly shaking on the ups.

By the lunch break near the at Carvoran, just by Walltown Crags, I really felt I had had enough, but restored by sandwiches and lemon squash, and encouraged by companions, somehow I managed to get up and go.

In fact, though the rain strengthened, the latter stages were far less taxing, and generally it was downhill, through Gilsland (where Walter Scott is said to have proposed to his wife), crossing the River Irthing at Willowford, stopping very briefly for a drink at Birdoswald, then slowly dropping down to our starting point and registration at Lanercost Priory.

It was over, and relief seeped through my tired legs, like hemlock.  I checked in with the organisers, about fiftieth I believe. 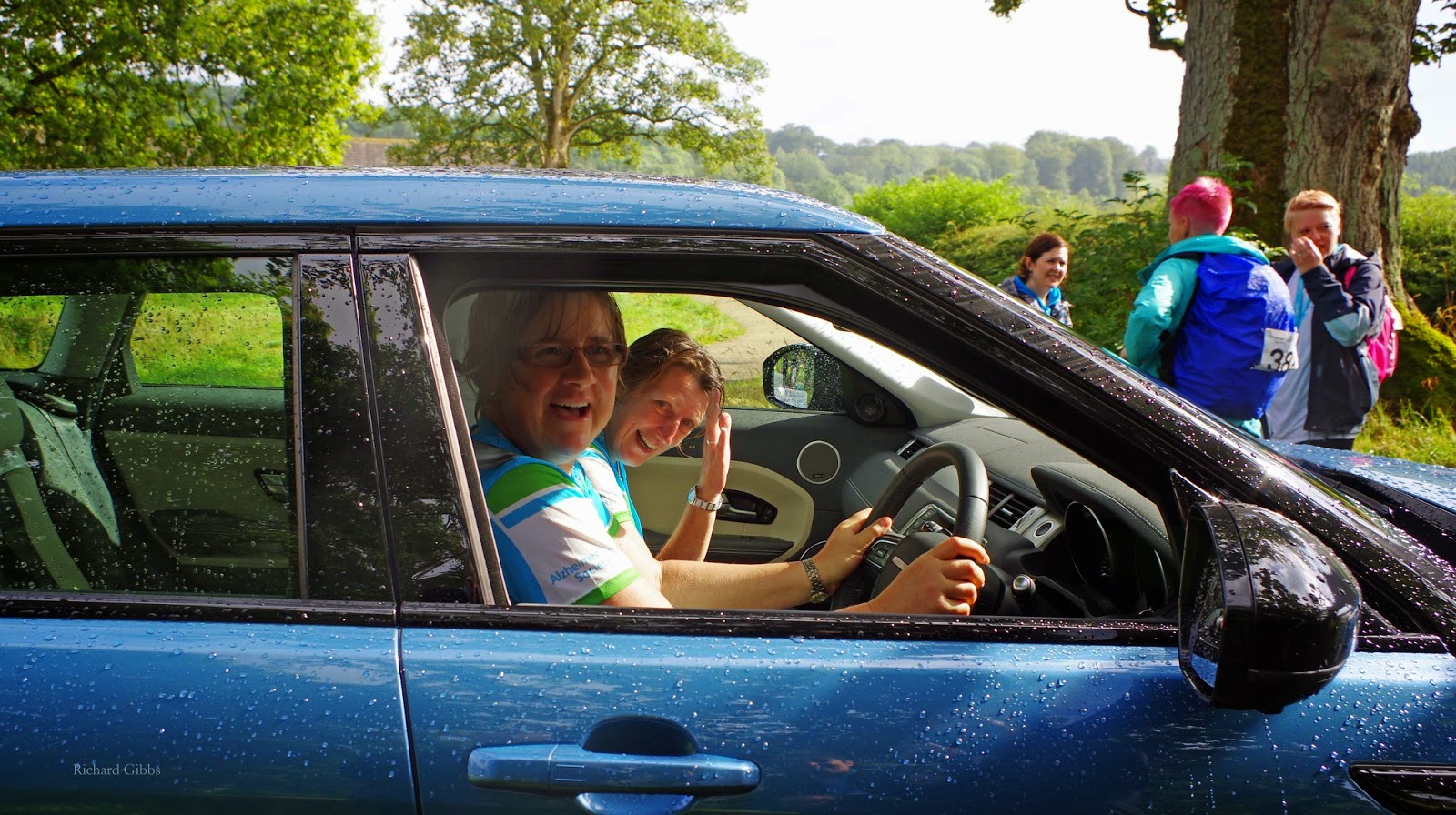 Later I learned that some had not made it, with a number having run out (excuse the pun) of time.  For me, it was thanks to all, goodbye to new friends, a pint in the pub and a soak in the hot tub. 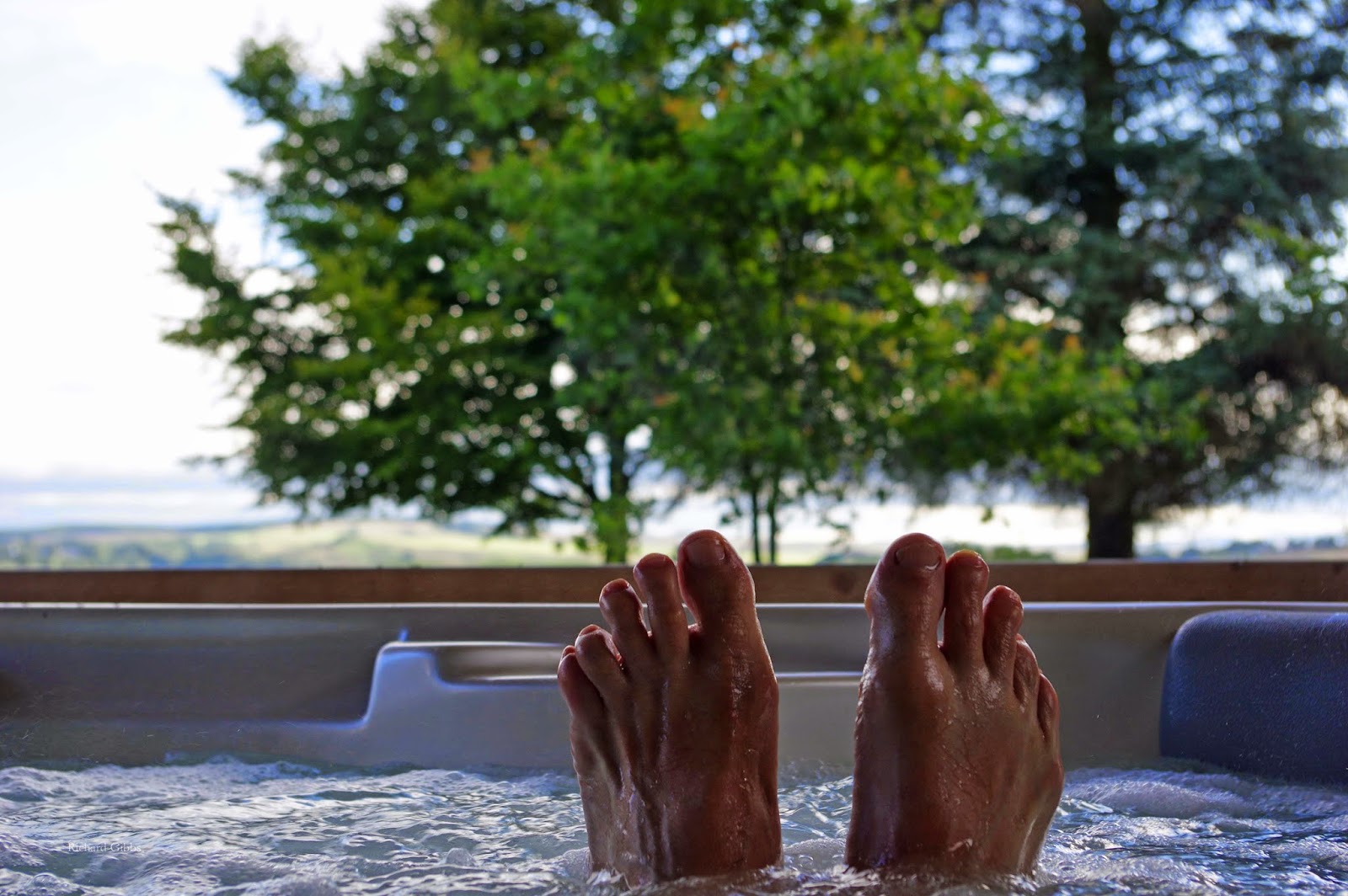 I was walled out, though the stunning scenery was imprinted on my mind, and I was elated by the sense of commitment that was so obvious from all: my companions, new friends, organisers and not least those who struggled and fell, all of whom were making an effort to support the Alzheimer's Society.  But, phew!  After nine and a half hours, had I hit the wall! 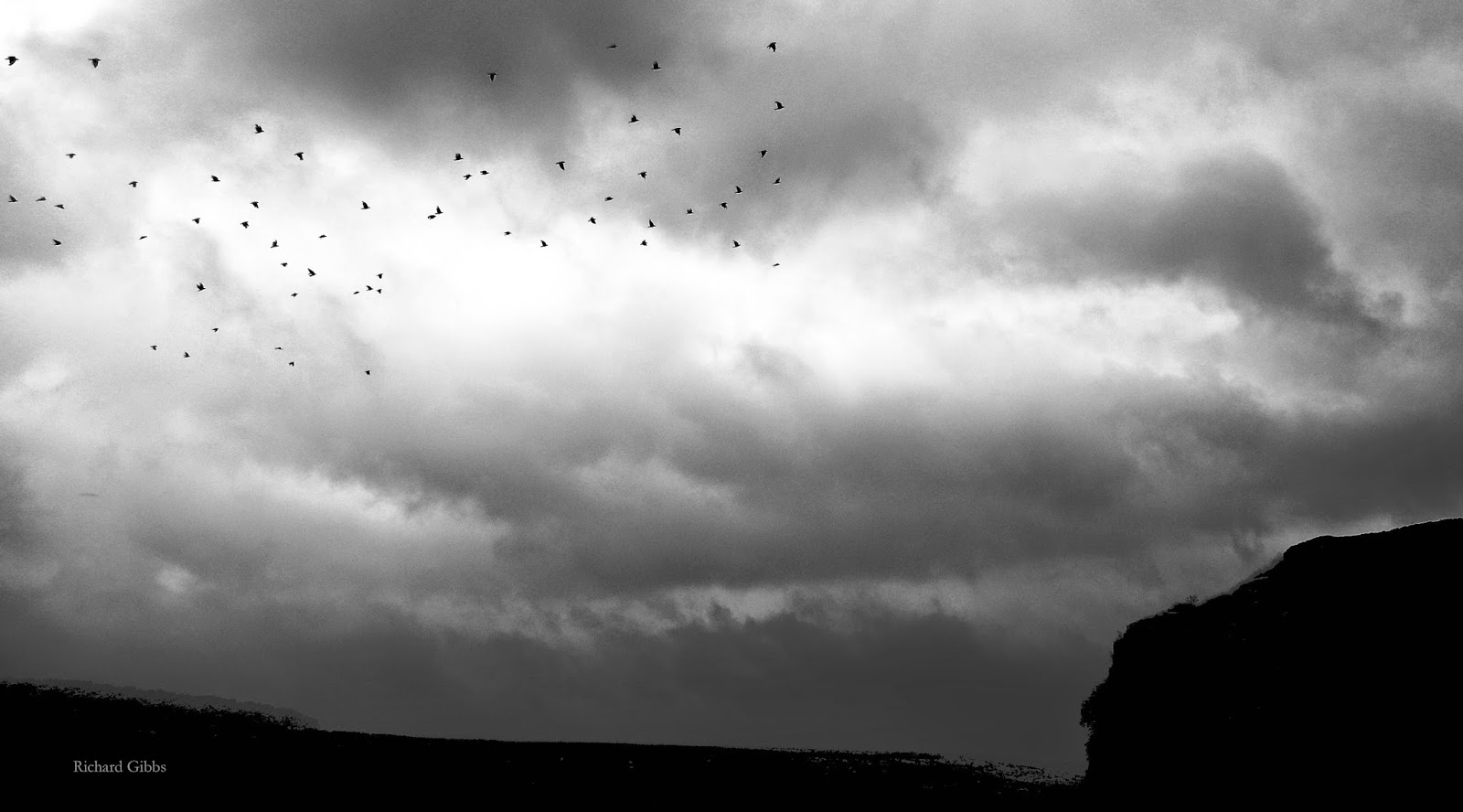 And it's not too late to contribute to the Alzheimer's Society.  Please do give generously, as every little bit helps.....