The Veil of Health


Although is little more than three miles from King's Cross, it's another world.  London has spread itself across the land, but surfacing from the 181 foot deep lift shaft (the deepest on the tube network - as deep as the Stone Gallery of St Paul's Cathedral is high) into the centre of Hampstead, you could be forgiven for thinking you had landed on another continent.  For a start, compared with the 84.87 million exits and entrances recorded for the King's Cross St Pancras International tube station in 2013, a mere 4.9 million passed through the turnstiles at Hampstead in the same year.

Property prices may have something to do with this, (a two bedroom terraced house will cost you over a million; a three bedroom flat in recently sold for £2.5m).

Supposedly Hampstead has more millionaires per square foot than anywhere else in the , though, that said, there is a pleasantly normal feel to crossing the road, or extracting £50 from a cash machine.

The reason Hampstead is Hampstead, however, is quite simple, and quite recent.  Apart from the Heath (which you can read about at http://www.richardpgibbs.org/2011/08/hampstead-heath.html) the opening of a well of chalybeate (spring water rich in iron salts) water in the seventeenth century brought the Londoners out in their droves.

People had moved here to escape the plague, and on December 20th 1698 the 3rd Earl of Gainsborough and his mother, the Honourable Susanna Noel, donated a well and six acres of swampy land for the use and benefit of the poor of Hampstead.  Soon a Spa, with pump house and assembly room was opened to rival those of Tonbridge Wells, and other fashionable resorts.

These waters, combined with the open spaces of the Heath, and the raised elevation of the village (Holly Mount is over 300 feet above sea level) brought the wealthy out from the city.  Also in this mix were two other factors - the lack of landed aristocracy favoured the nouveau riche; protestant dissenters had moved here when they were forbidden to preach within five miles of Charing Cross.  Hampstead as a haven for free thinkers was born.

Health was at the heart of Hampstead; health which goes hand in hand with wealth.  It is one of the ambiguities of the Welfare State that if you live in Tower Hamlets, or , or some parts of , you are likely to live less well, and for fewer years than if you reside in Fitzrovia, Rickmansworth, or Cheadle Hulme.  But then another irony is that the (the combination of Royal and Free being a nice touch) is not only the biggest employer in Hampstead, but a slice of that welfare state that we all can benefit from.  As I noted before, my mother was once hospitalised in the Royal Free (following a nasty fall and a serious loss of blood) and it was to spend a few hours with a specialist the other day that I returned to sample the healthy delights of the Village.

So I appreciate the salubrious environs, the quiet shambles, the fresh(ish) airs, and the views.  I appreciate the fact that the state makes provision to examine, and treat, those who may not be 100% fit and well, and long may it continue.

But I am also struck by how many plaques, from various organisations, there are on the walls, fixing where the well-to-do made their marks:  George Romney, R L Stevenson, 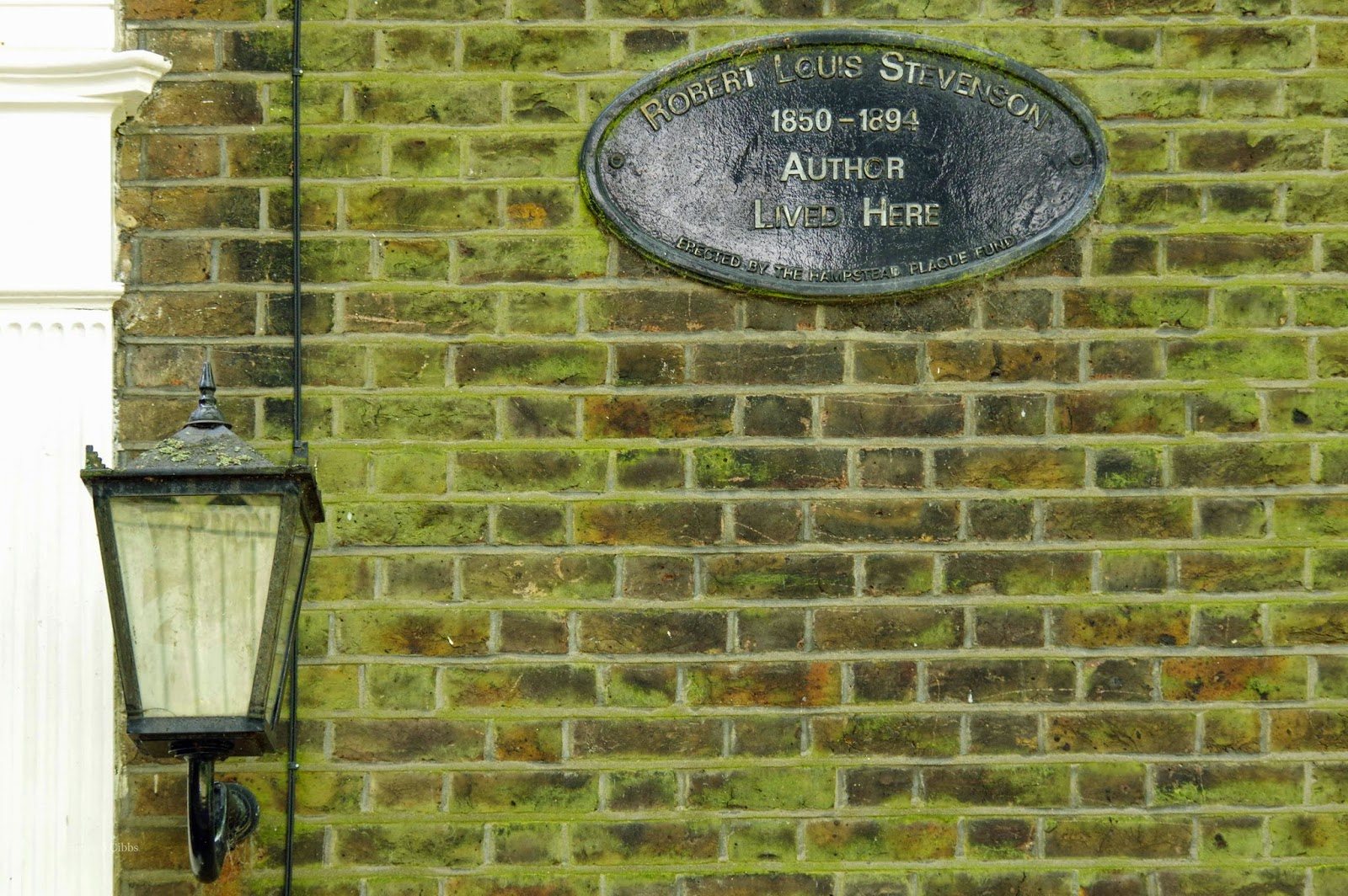 Arthur Bliss, Ian Fleming, William Empson, Benedict Cumberbatch, Walter Gropius, Chris Bonington and Thierry Henri, amongst a number of other celebrities, lived, shopped and aired their views here. Though not all at the same time.  Wikipedia has an entry entitled: List of People from Hampstead, which is a slightly coy way of indicating the 250 people it reckons are famous enough to elicit some interest.  It stars those who were born there, though they are few, and does not state which of them lie buried in the parish graveyard, of whom John Constable,

and Hugh Gaitskell are probably the most notable..... 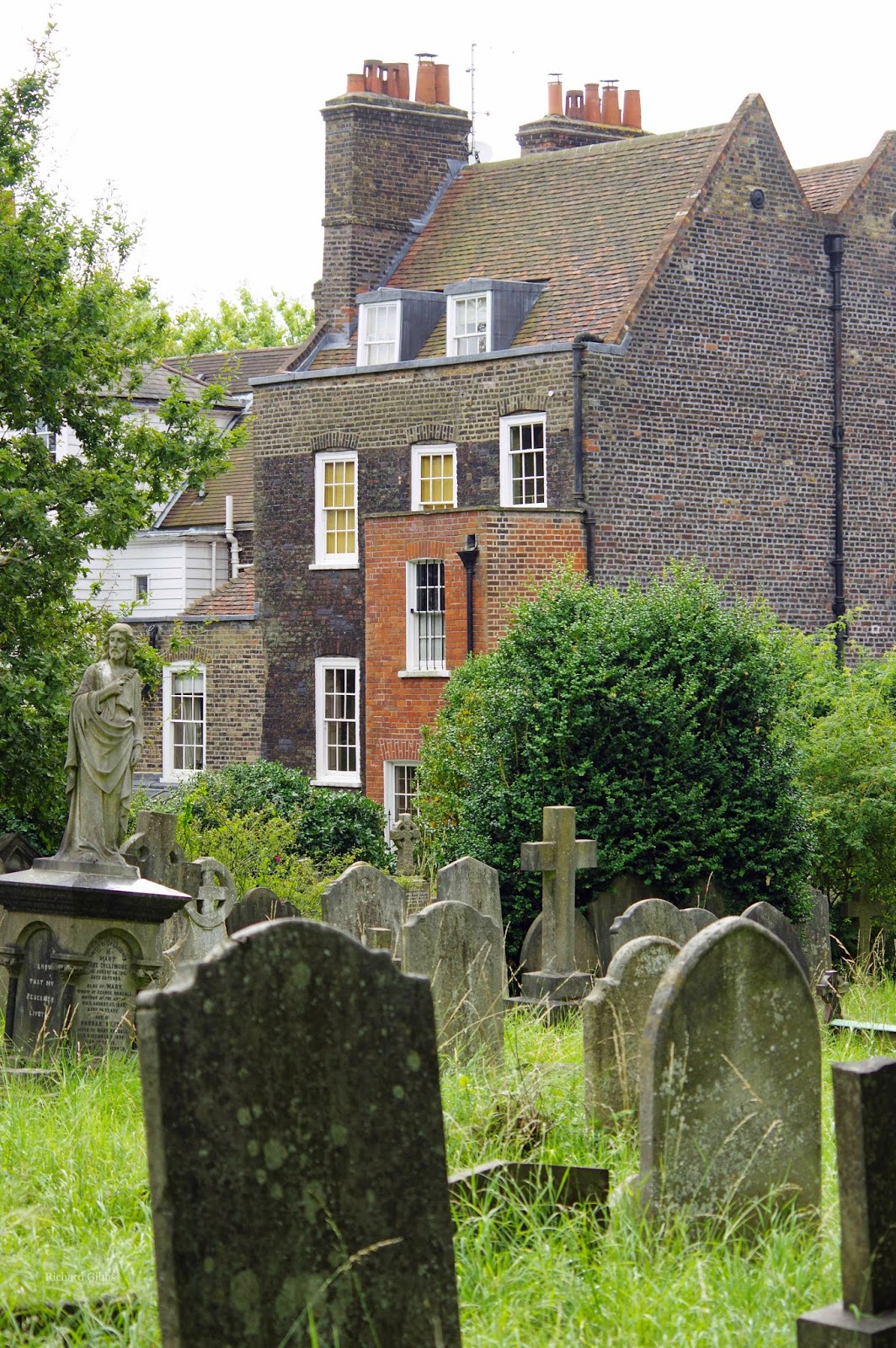 What Wikipedia does not tell us is who has lived longer here because they were here.  The Vale of Health, where the Village meets the Heath, was probably so named to disguise its unhealthy origins, but became fashionable after Leigh Hunt lived there (until 1819) entertaining the likes of Byron and Shelley, neither of whom grew to old age.  Roughly a hundred years later D H Lawrence, possibly in the company of John Middleton Murry and the also tubercular Katherine Mansfield, coughed a little here, before taking off for sunnier climes. 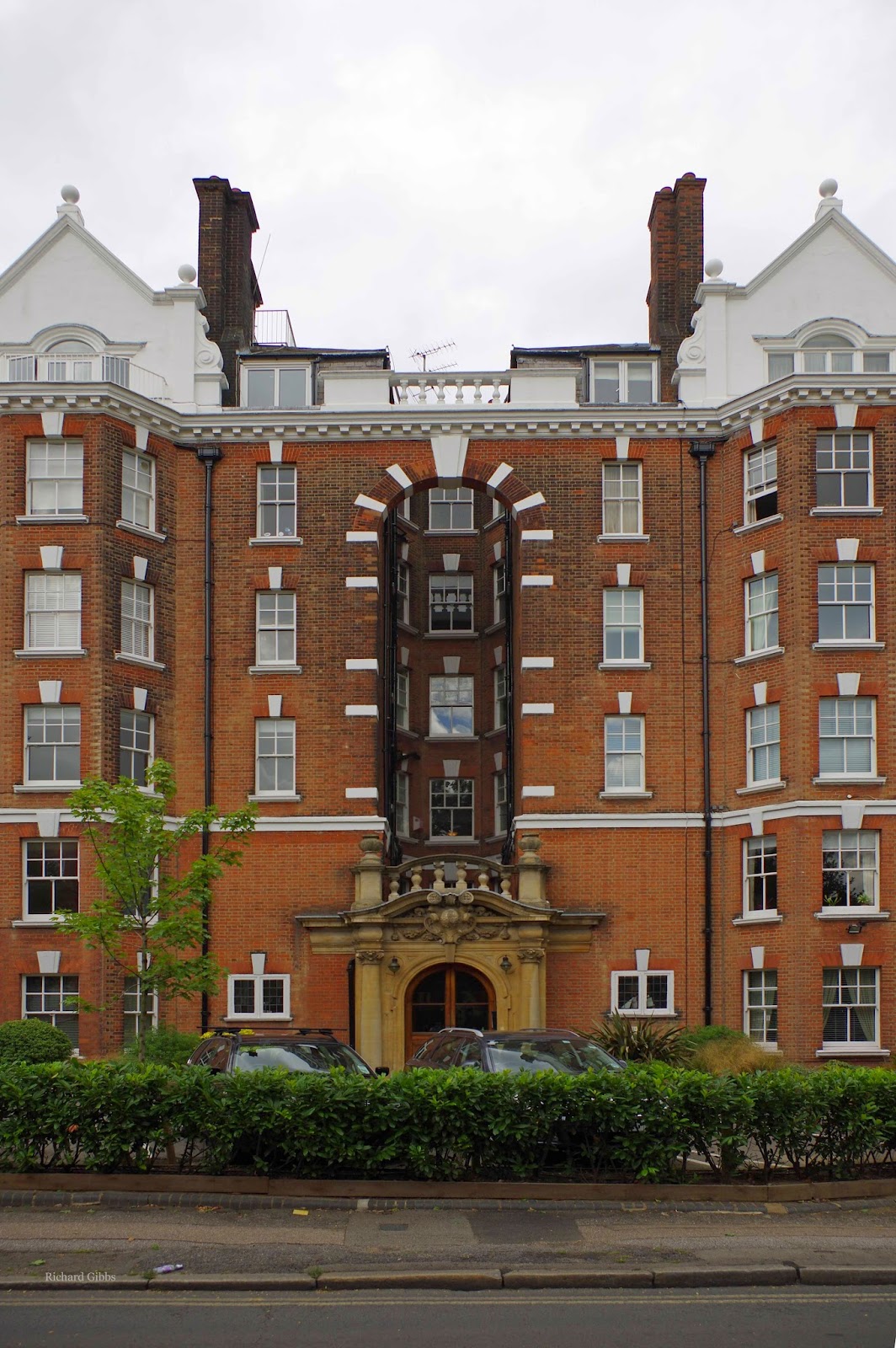 Personally I wouldn't mind a pied a terre nearby.  Handy for the Heath and its convivial bathing (so long as you get the right pond); easy for a wander up to The Holly Bush for a sausage roll, 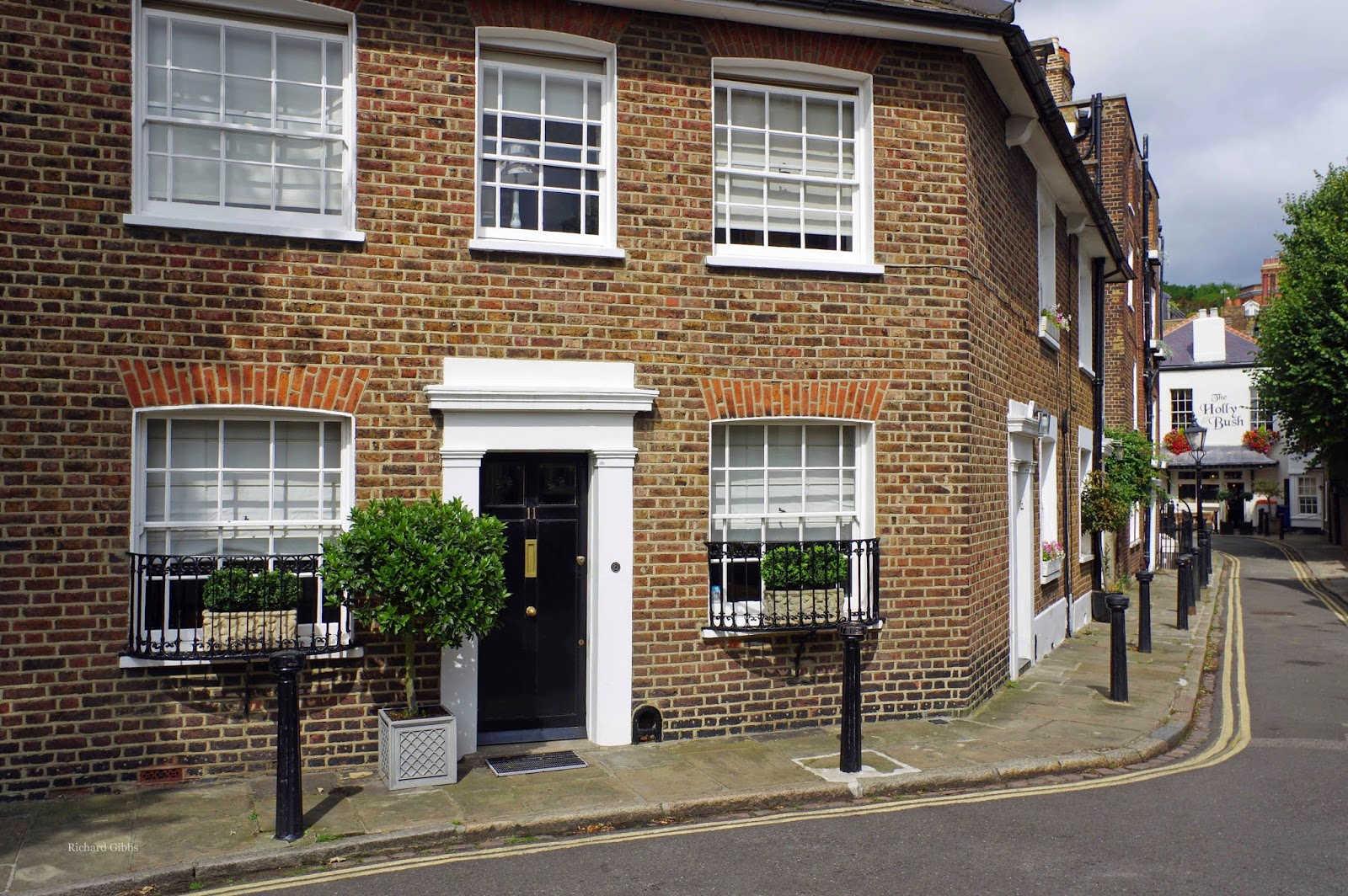 or down to The Flask for a pint;

within reach of the Royal Free for a defibrillator, and only 181 feet down to the Northern Line and access to Soho and beyond.  I could spend my days listening to harpsichords in the gardens of Fenton House,

celebrate psychology at the or watch an art film at the Everyman.  If all else seemed dull I could even sit under a plum tree in the garden of the Keats House and wait for a nightingale to fall on me....

It's the health of my wallet that grieves me.  Nothing short of a pair of millions would make this accessible, so, purtroppo, it ain't going to happen.  We will draw a veil over this.....

As signor Keats once wrote:

Forlorn! the very word is like a bell
To toll me back from thee to my sole self!
Adieu! the fancy cannot cheat so well
As she is fam'd to do, deceiving elf.
Adieu! adieu! thy plaintive anthem fades
Past the near meadows, over the still stream,
Up the hill-side; and now 'tis buried deep
In the next valley-glades:
Was it a vision, or a waking dream?
Fled is that music:—Do I wake or sleep?


Doctor doctor tell me the time of day....