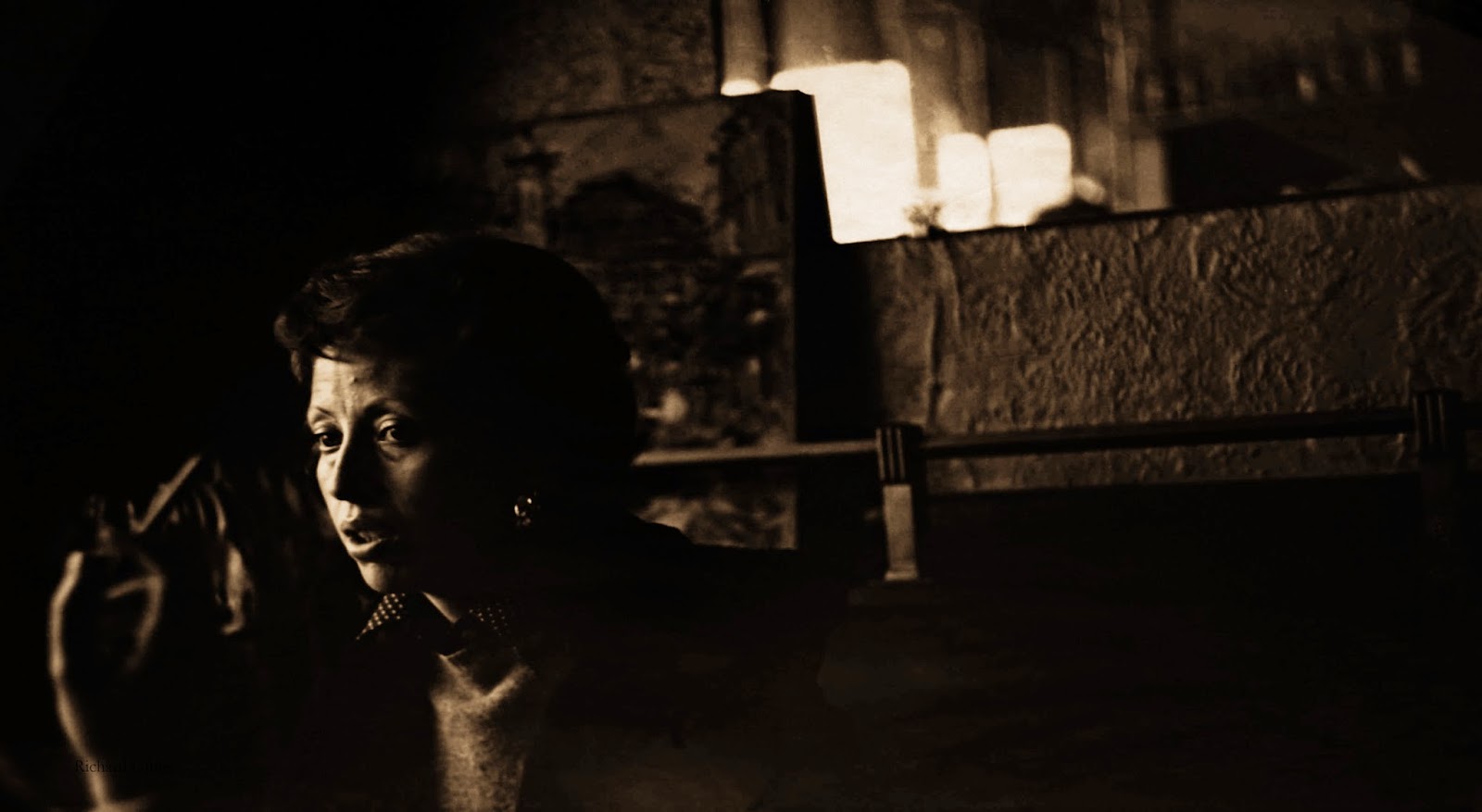 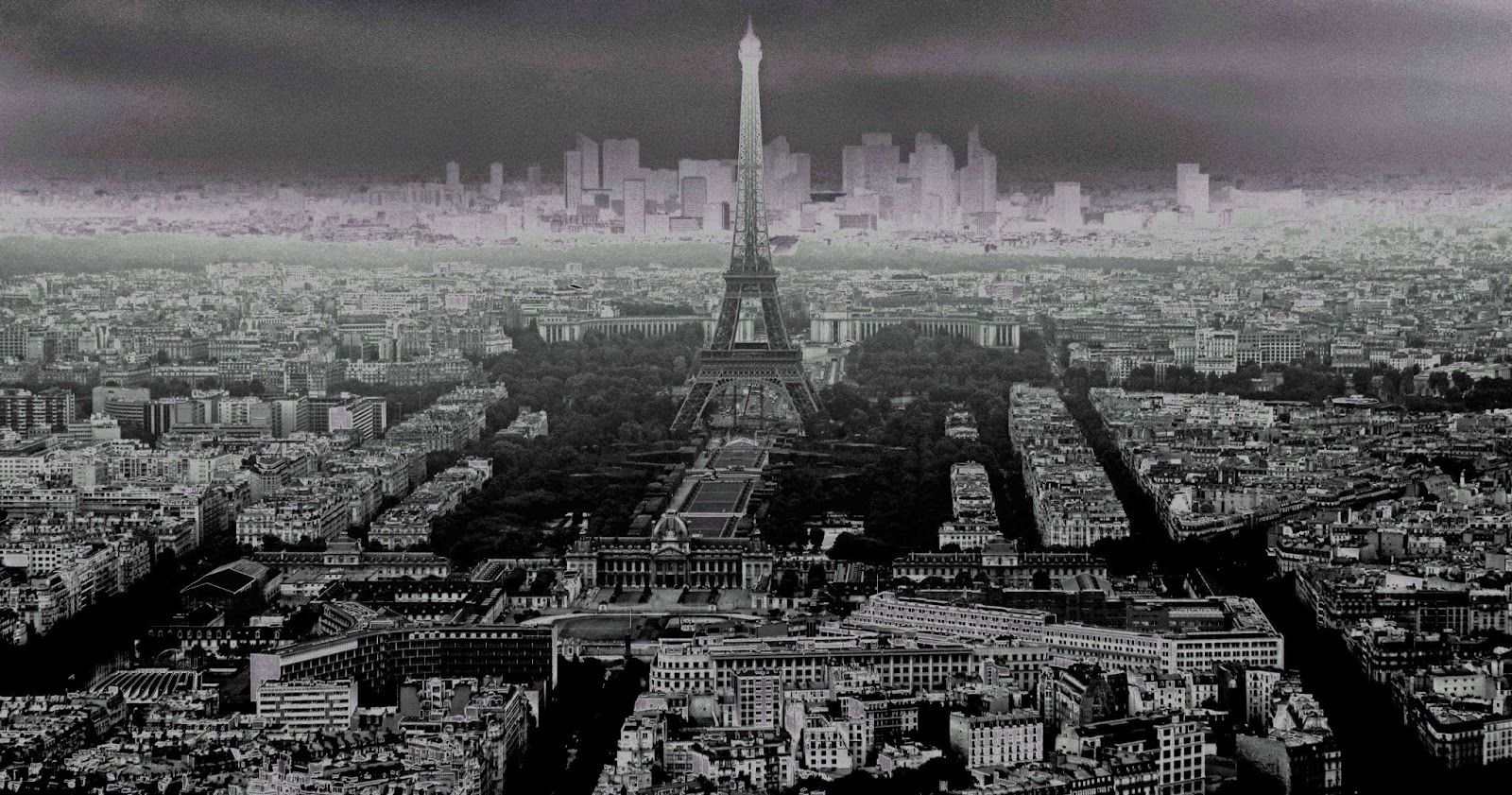 If rape or arson, poison, or the knife
Has wove no pleasing patterns in the stuff
Of this drab canvas we accept as life —
It is because we are not bold enough!
(Charles Baudelaire - Dedication to Les Fleurs du Mal, translated by Roy Campbell)

From Edgar Allen Poe to Bob Dylan, from Joyce to Simenon, Baudelaire to Queneau, has touched the inspiration of generations of writers and artists. Ernest Hemingway, in A Moveable Feast (unfinished at his death in 1961) wrote that, There is never any ending to and the memory of each person who has lived in it differs from that of any other. We always returned to it no matter who we were or how it was changed or with what difficulties, or ease, it could be reached. was always worth it and you received return for whatever you brought to it. But this is how was in the early days when we were poor and very happy.....

first took me in some forty years ago.  I think it was a little after someone dismembered Oscar Wilde's tomb and just before they buried Jim Morrison.  We lodged in the Rue d'Aboukir, not realising until afterwards that this seedy street was named after Napoleon's defeat at the hand of Nelson in the of the .  The room was tight, to say the least, up a spiral stair some seven floors, and the open bidet, the first I had ever seen, inspired my first novel (View from a Bidet, still unwritten!)  My innocence at the time was confounded by the hungry women who lined the streets at dusk, stretching out their arms to measure their pitches.  We found bars where absinthe still existed in unlabelled greenish bottles on high shelves.  I learned somethings about the drab canvas of life over moules marinières in the early hours and got a taste for the bohemian that still burns.

We dined at Chartier, and discovered steak tartare at Le Drouot (sadly no longer in business), and in those days Le Commerce, in the 15th arondissement, was also under the same management.  These bistrots were vividly different from anything we had experienced, with an irresistible conviviality. I return whenever I can, and on the day I borrowed the above menu I sat next to a man with a face so wrinkled it seemed to be made of corrugated cardboard.  Here was one who would take the air willingly in graveyards, when take the air he must. I understood then that the end was near, or at least fairly near.  No amount of rognons saute sauce moutarde would stave off the need for his epitaph soon:

Hereunder lies the above who up below
So hourly died that he lived on till now.

Break bread with Samuel Beckett I did, though we did not speak much. Strangely it was on the very same day, one year later, that he died, and he now lies with Suzanne in Montparnasse cemetery.


Conviviality! This week I sat next to a Parisien who also first ate chez Chartier some forty years ago.

I take a p'tit cafe creme at the bar, only to learn that on Bastille Day 2014 this bar will have become history - though the restaurant will survive. 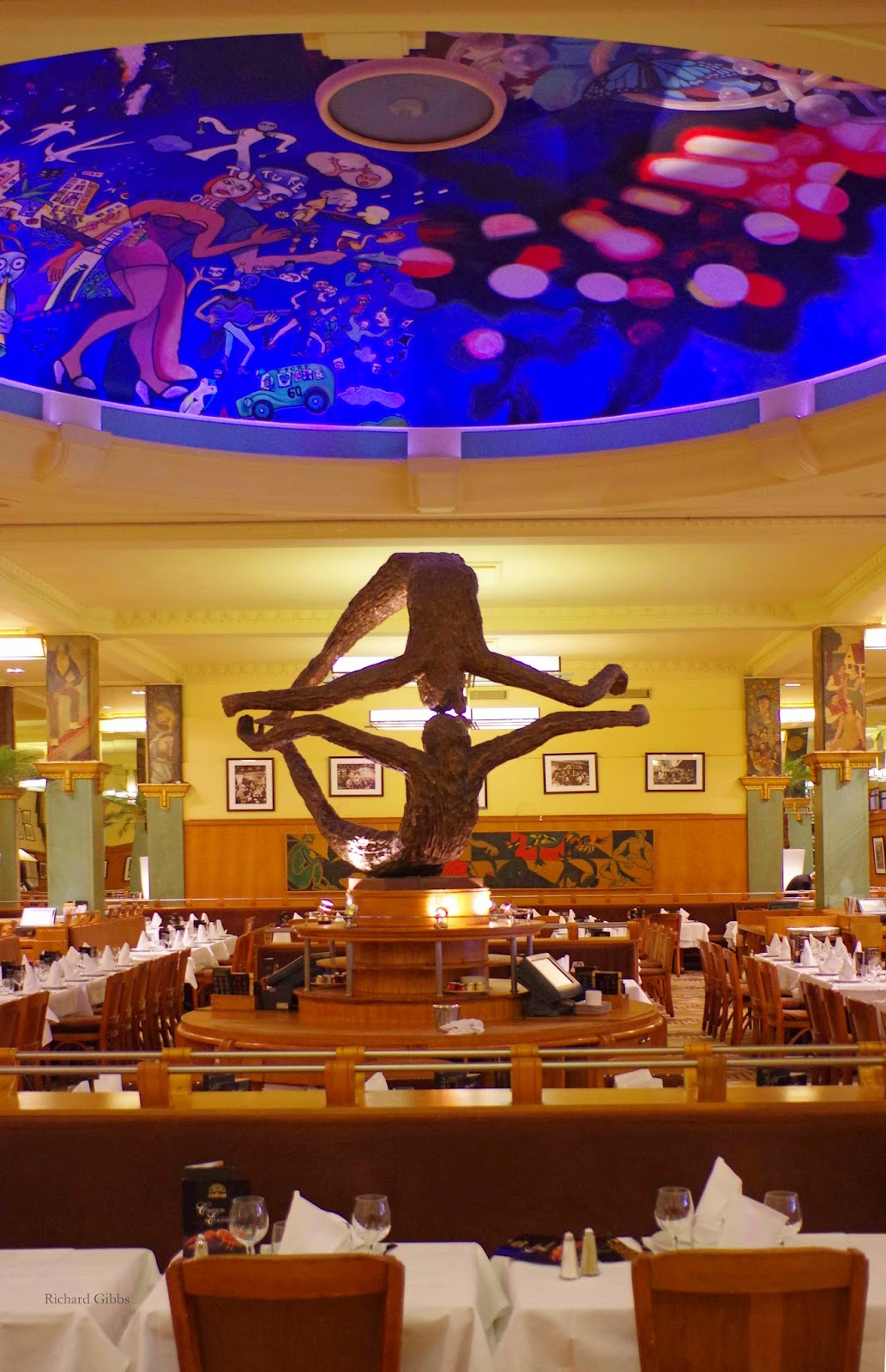 In 1973, as part of President Pompidou's drive to modernise Paris (on the coat heels of Hausmann), the Montparnasse Tower was inaugurated. The 59th floor, open to the sky, is at 689 feet above the street level.


A lift takes you to the 56th floor in 38 seconds, at 19 feet per second. From here, whatever the weather, you can gaze down across the city, or have your photo taken against les toits de Paris. 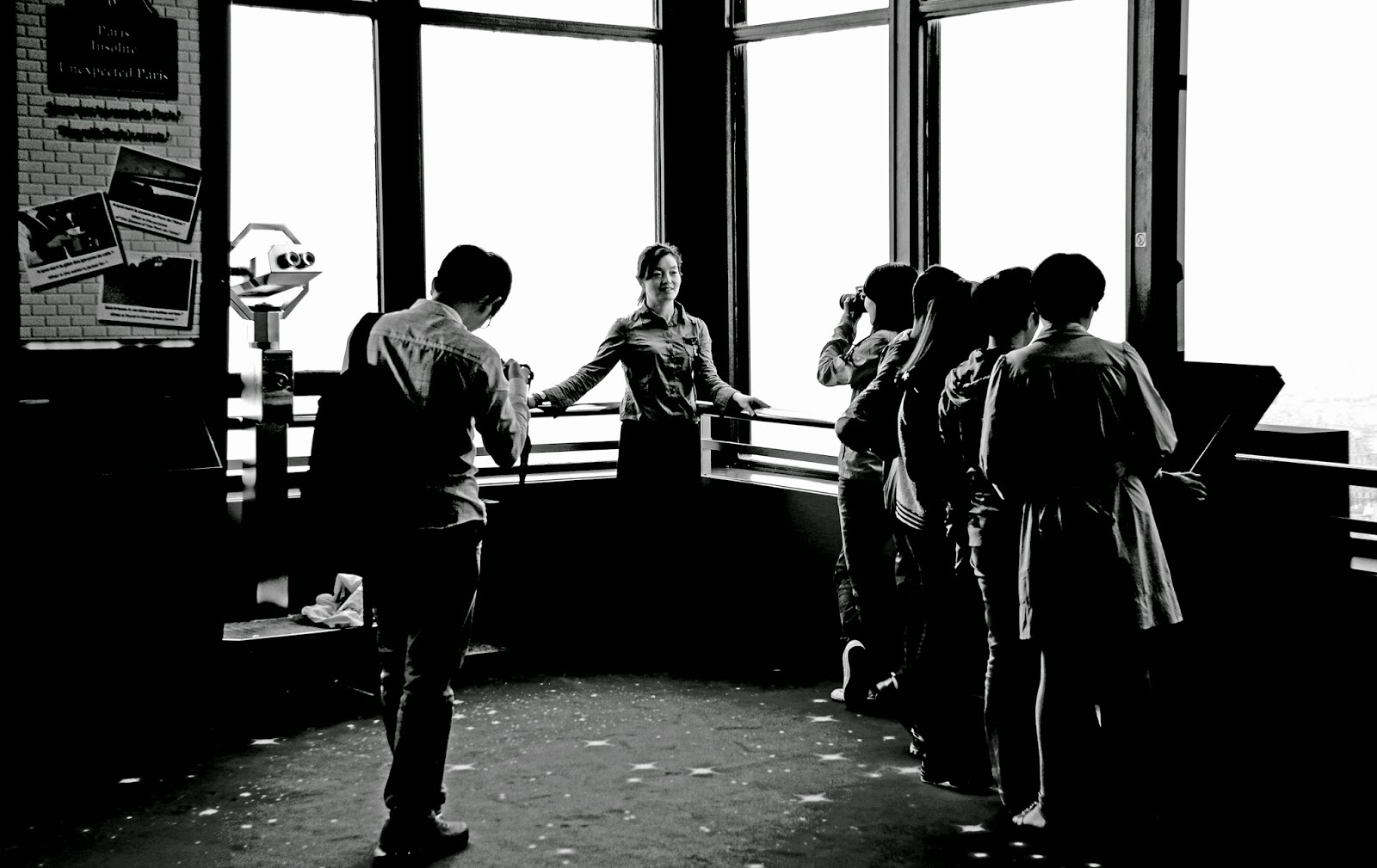 Or lean out to touch the sky: 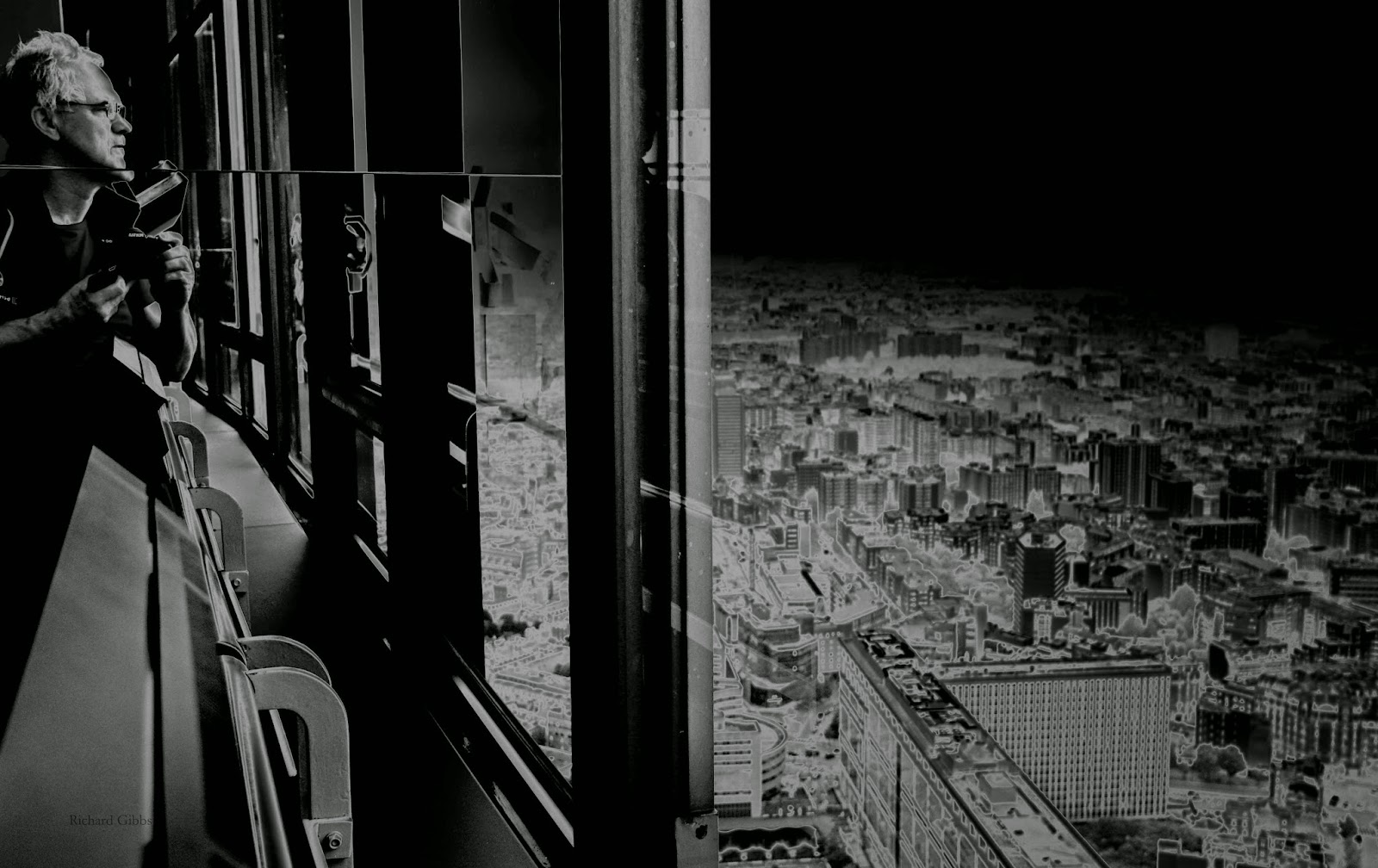 Paris is not a city of skyscrapers. The Montparnasse Tower is really the only modern high point in the centre of the city, though the Eiffel Tower, which was built in 1889, is the highest structure at 1063 feet. 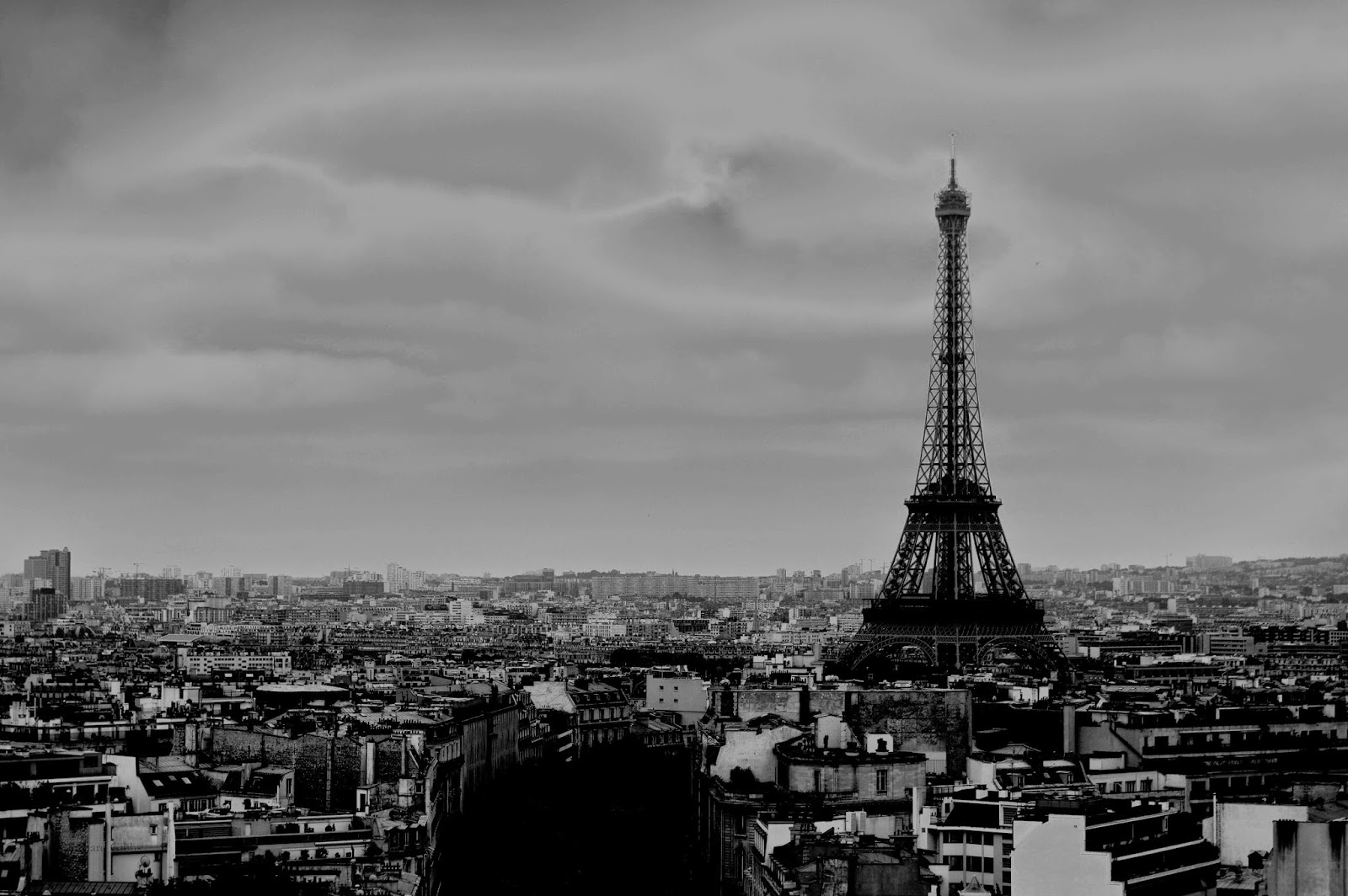 The Arc de Triomphe, which was inaugurated in 1836, is only 164 feet high, but is still a much visited viewpoint, set as it is in the midst of one of the craziest roundabouts in the world. 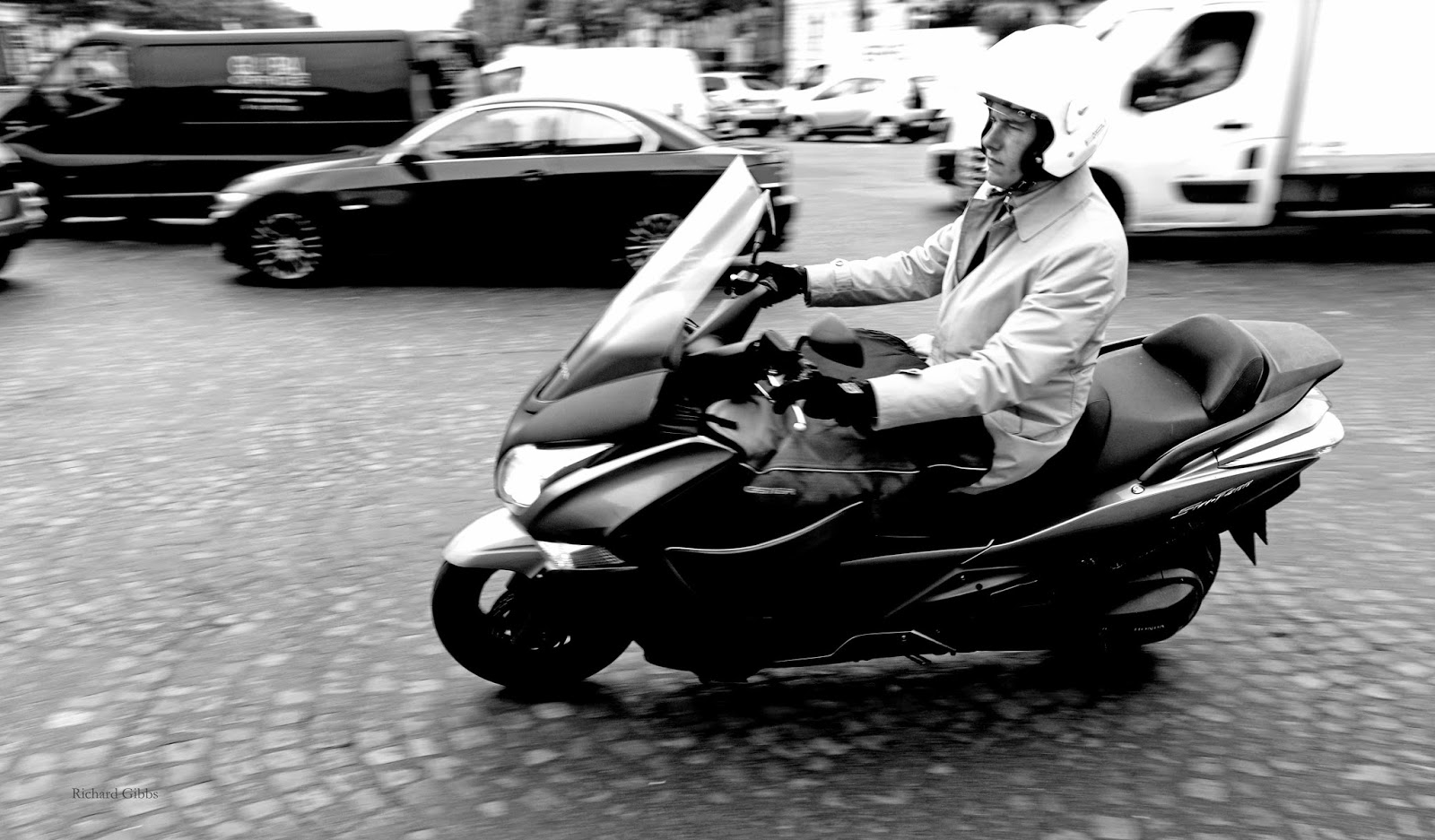 It is just possible to glimpse the arch on the wing of this speeding car..... 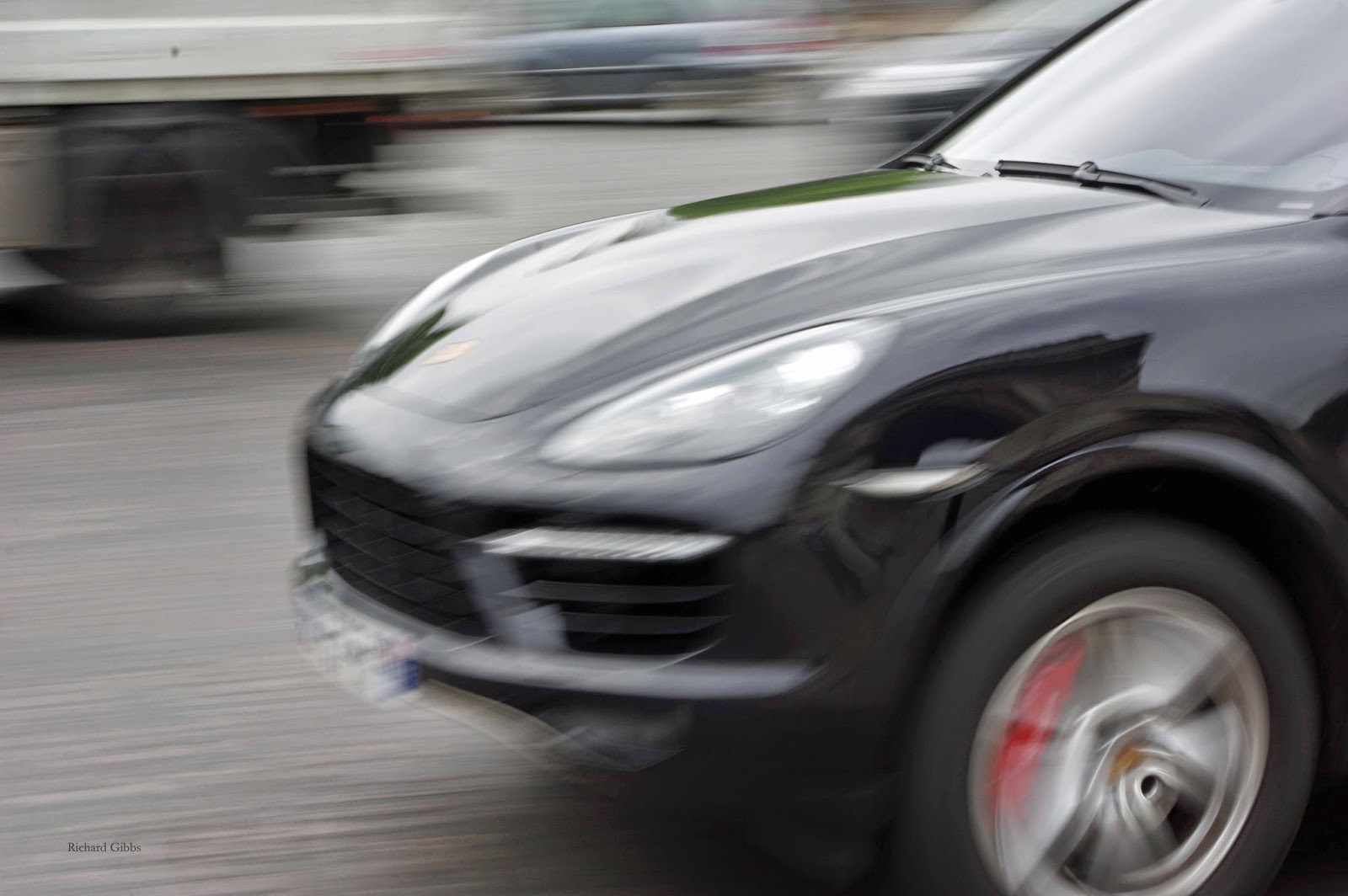 The Pompidou centre is an attraction in its own right, packed with artistic interest, and framed by tubes. But it does offer a view over the rooftops of Les Halles, where the markets used to fill the heart of the city. It also has some seriously unfinished staircases.... 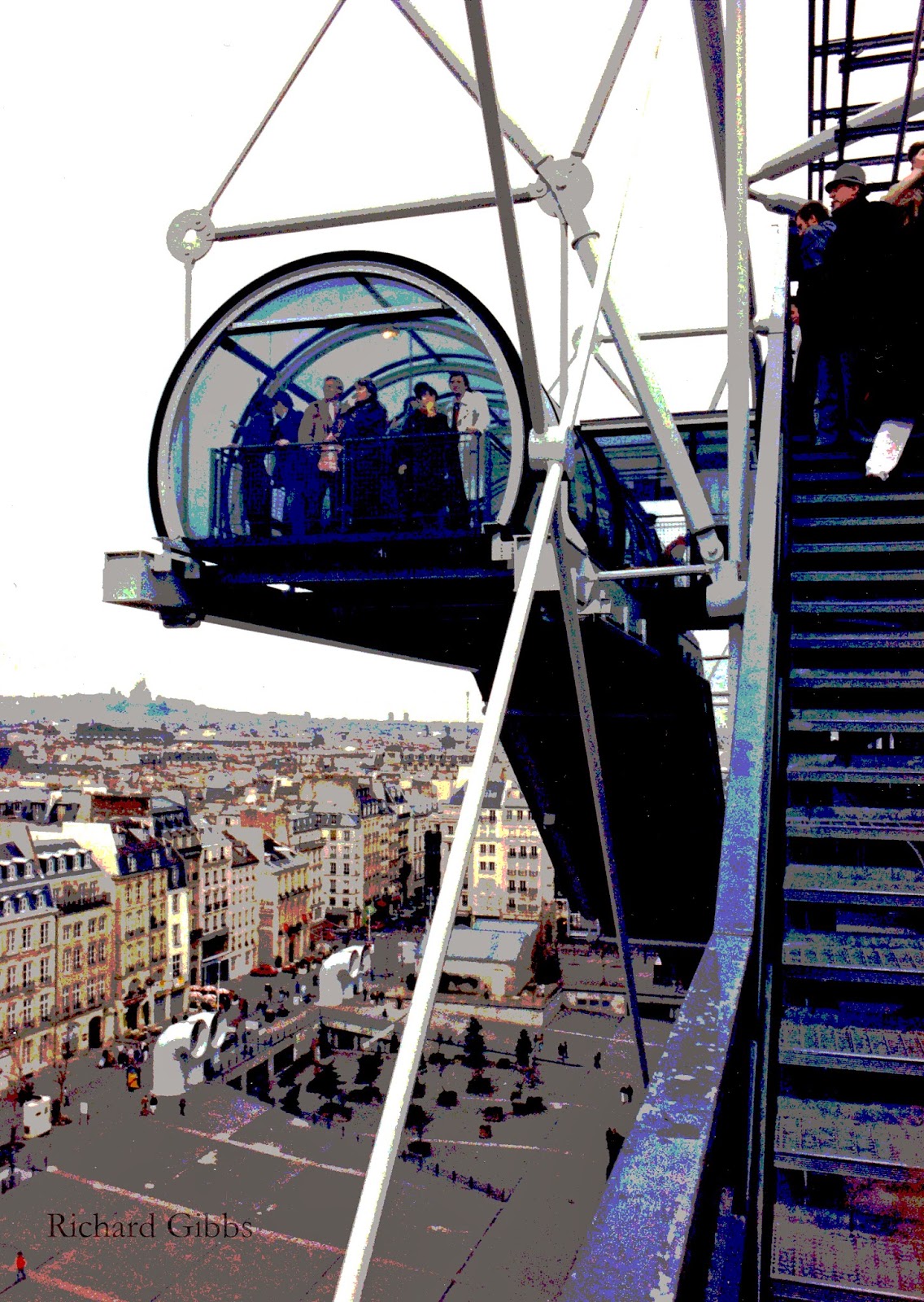 And the lead-clad roofs and chimney stacks continue to fascinate, where there is no smoke, without fires....


The Basilica of Sacre Coeur de Montmartre is the second highest point in Paris after the Eiffel Tower, standing 200 metres above the river Seine, though the dome itself is a mere 83 metres high.  It was completed in 1912, though not consecrated until 1919. 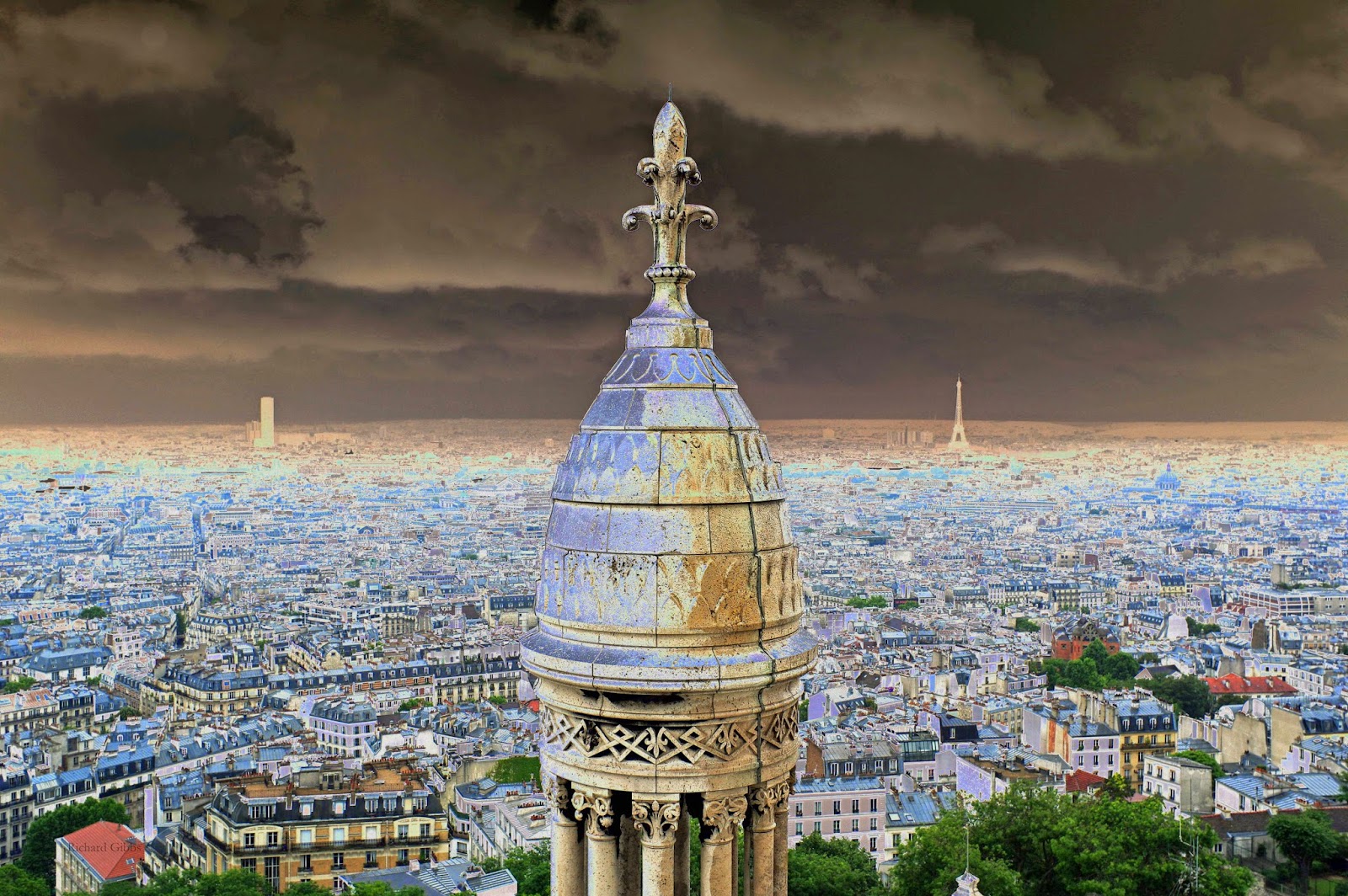 The oldest viewpoint is at the top of the towers of Notre Dame, completed in 1345. From here grotesque gargoyles contemplate the changing world below them, bemused by the trails of queuing tourists, and puzzled by what they observe through the political windows around them at the heart of French government. 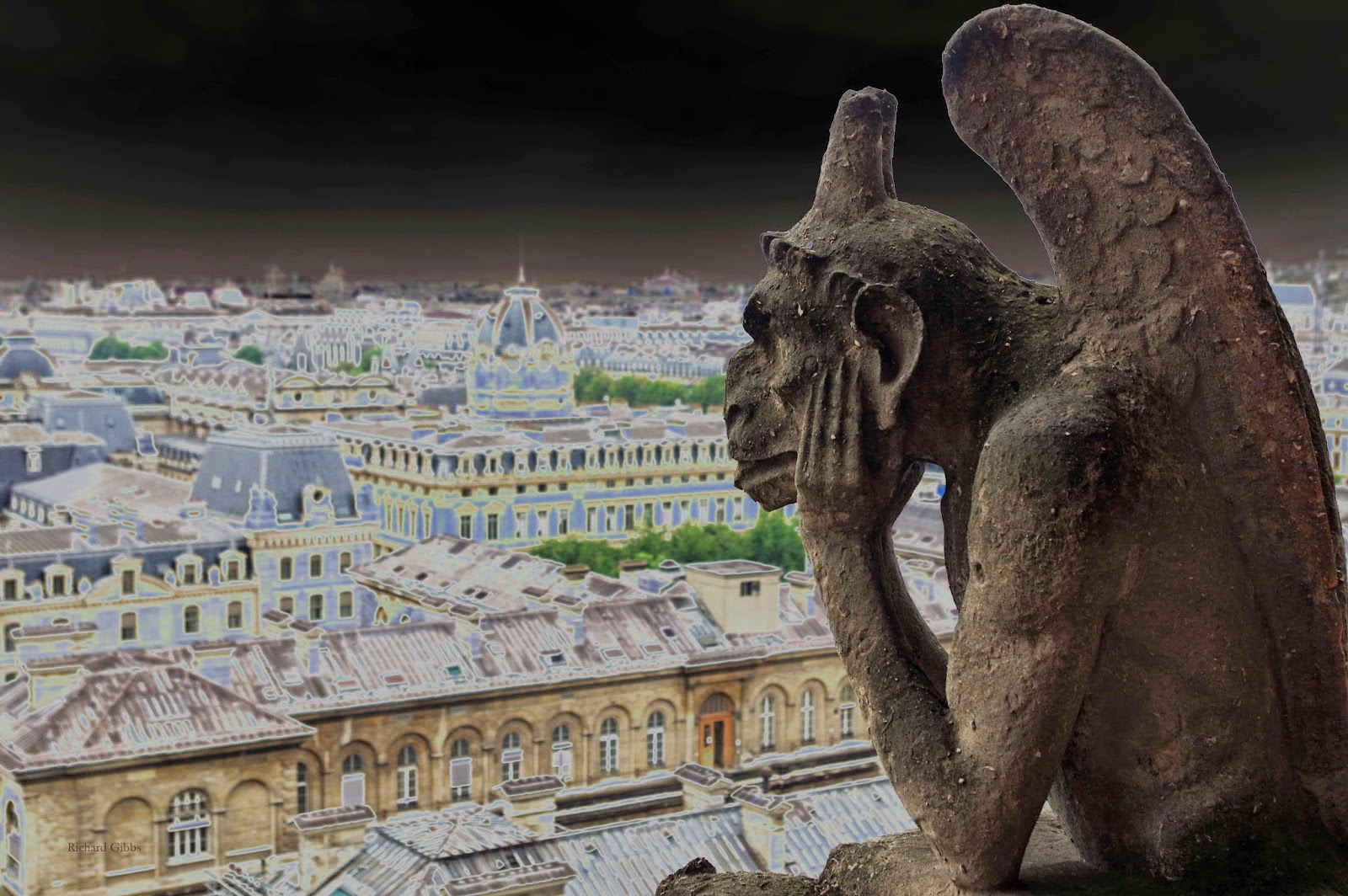 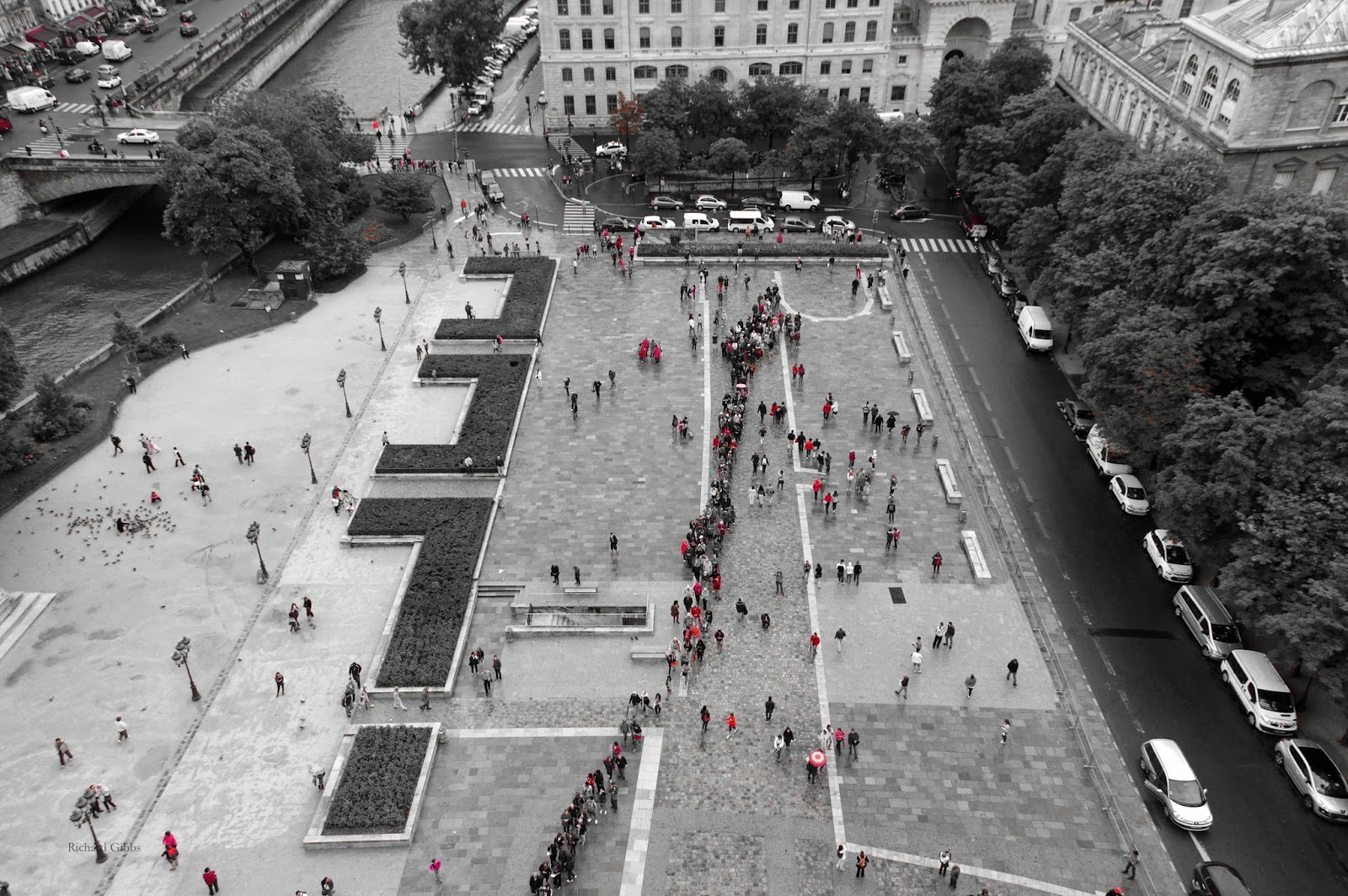 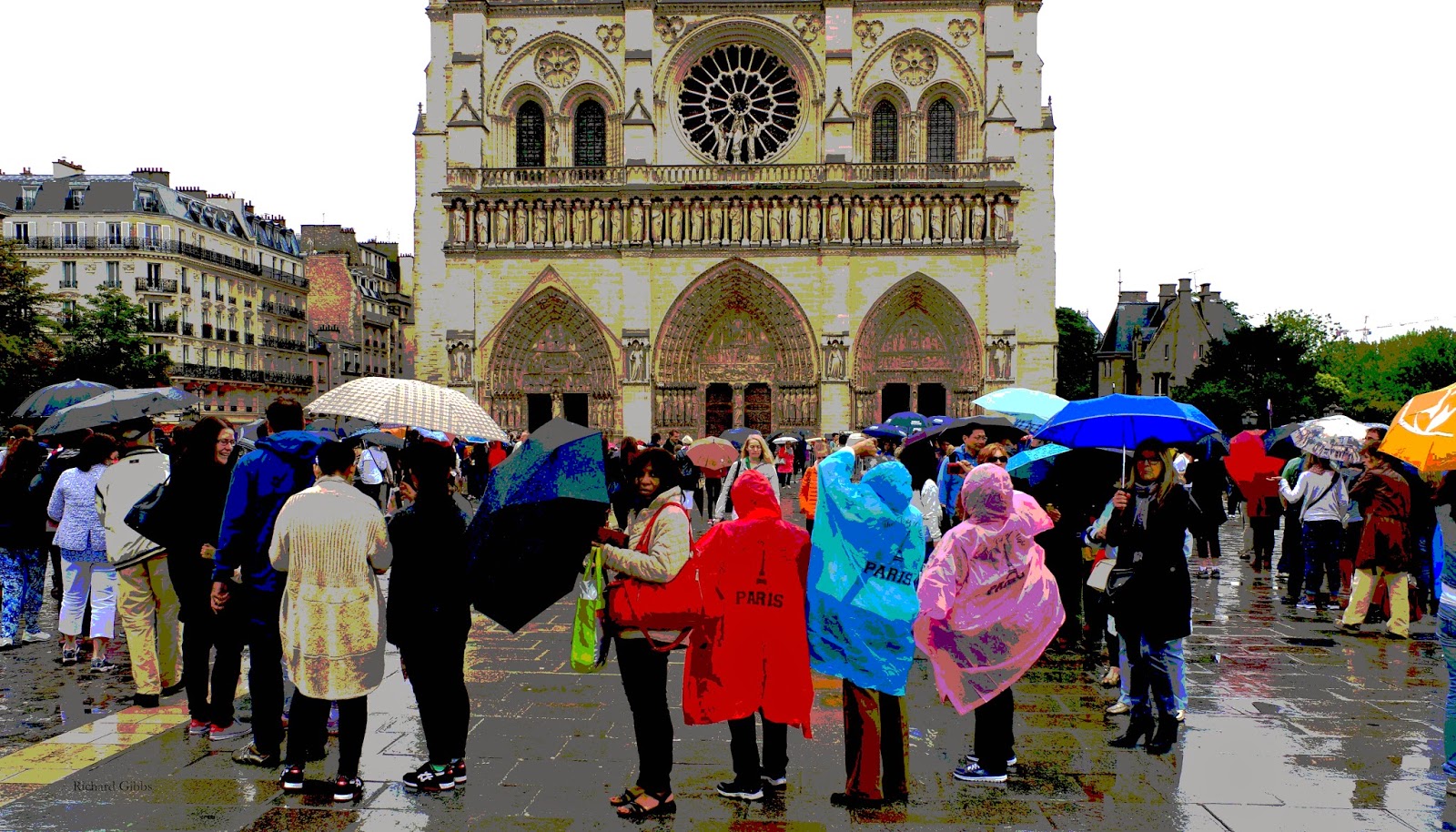 From the heights, the descent into the underworld can be awesome. The sewers and the catacombs attract the curious, but to traverse the city it is necessary to be swallowed by the earth. 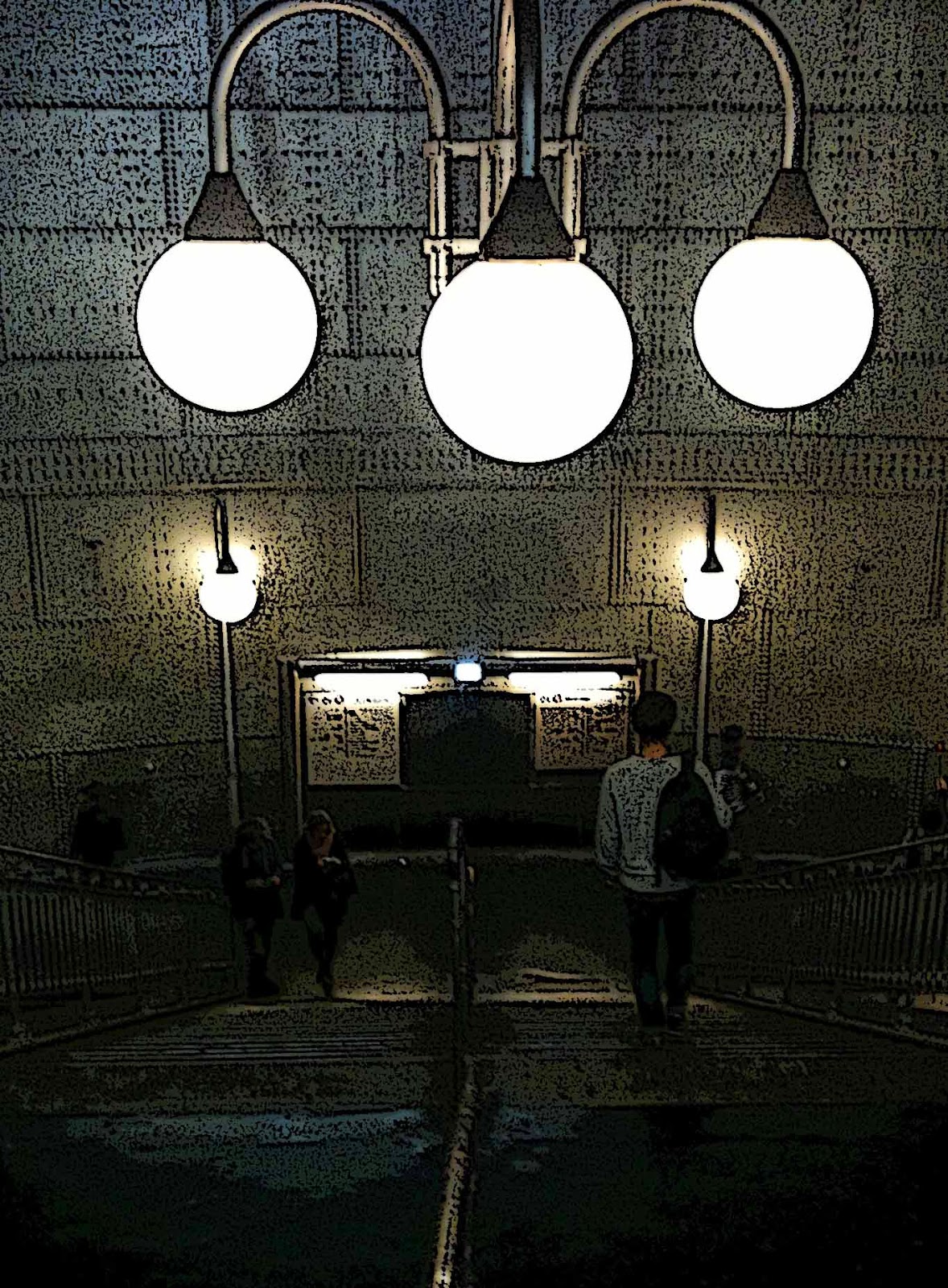 And then you are entombed within the system of tunnels and stations.  Flashing lights, clasping doors and whooshing trains blur continuously around you. 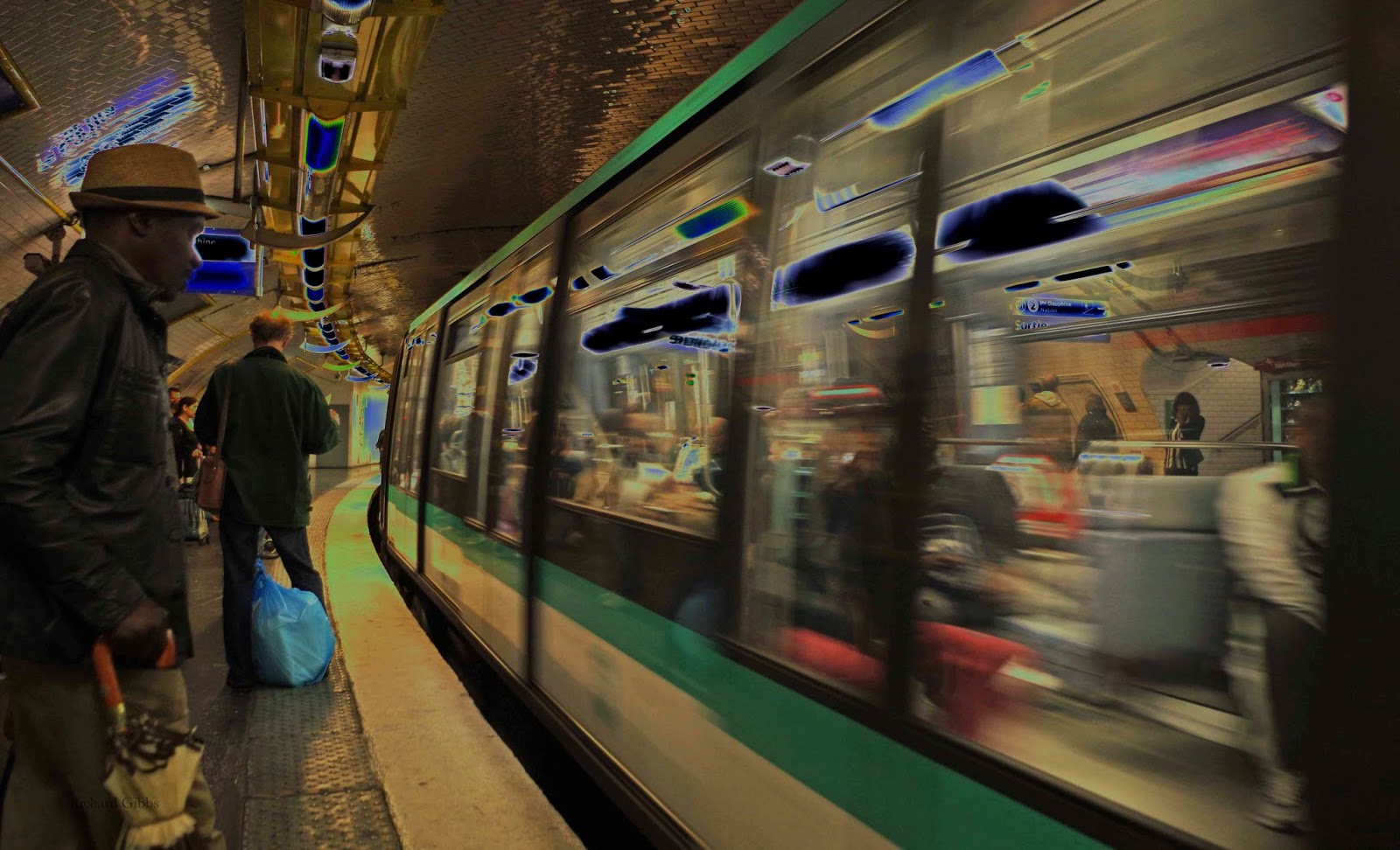 Some trains self-driven, zooming past each other with passengers at the wheel..... 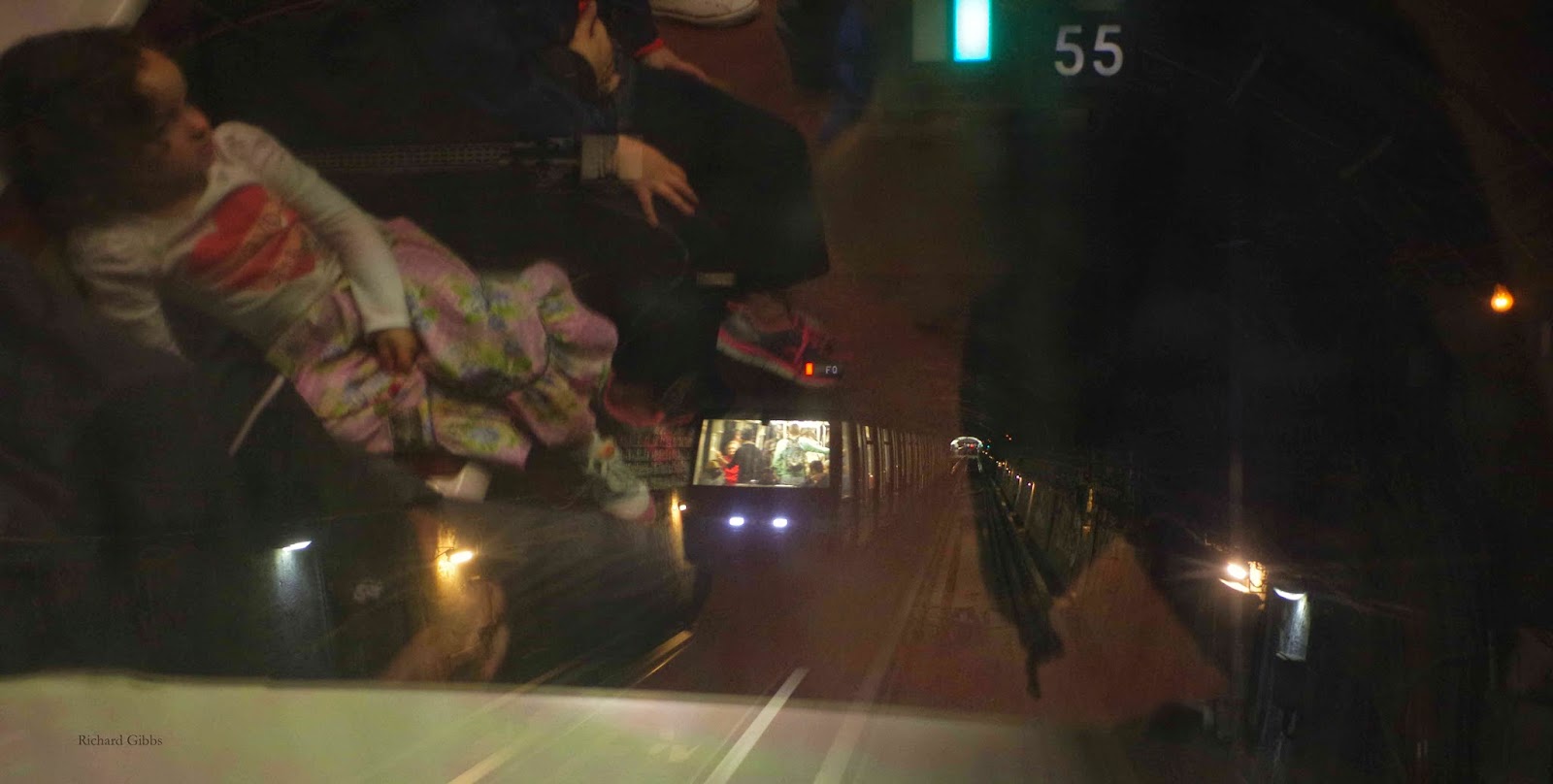 Then, between the extremes, Paris at street level is a bustle of life, with a population of two and a quarter million in its administrative area (and with over twelve million in the metropolitan area it constitutes one of the largest centres of population in Europe). However, with the Seine coursing through the centre and plenty of parks there is always somewhere calm to light up une Gitane....

There is no shortage of sights to see, or of things to do, and there are still red lights, even if not as once famed around Le Moulin Rouge.... In the lull between the twentieth century world wars Paris was cheap for Americans, and the world literary scene was energised by the presence of philanthropists and benefactors like Ezra Pound, Gertrude Stein and Sylvia Beach. James Joyce and Ernest Hemingway both benefited from the support they found, and others, such as Scott Fitzgerald, joined the party. Cafes such as Les Deux Magots became haunts of the literati. Brasserie Lipp, in St Germain, and La Closerie des Lilas, were favourites of the Hemingways, while the Joyces preferred the more expensive Michaud (now Le Comptoir des Saints Pères). 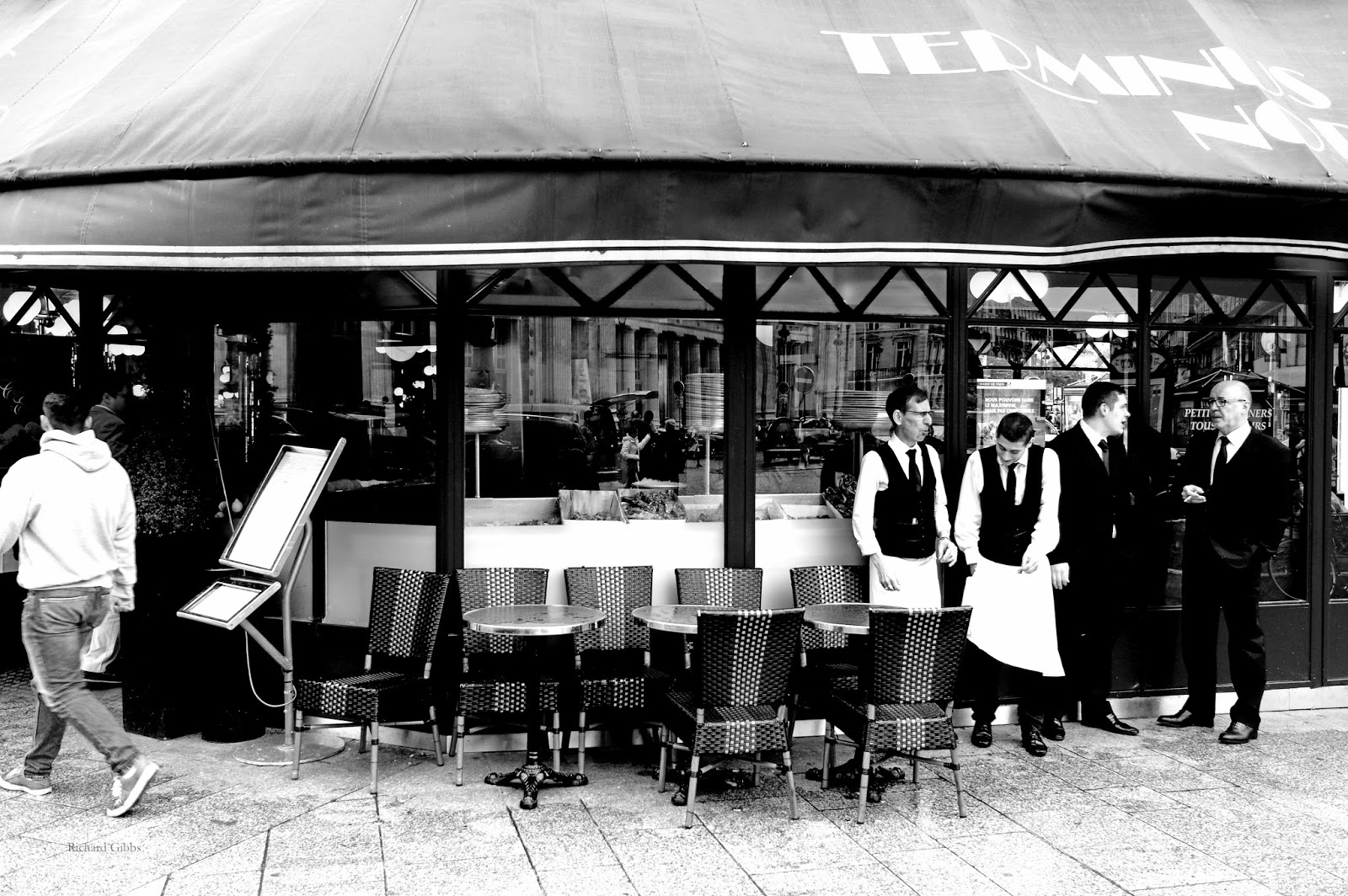 Truth is that that was nearly a century ago, and though there are connections with those days, things have moved on. Truth is that Paris has not been cheap for decades, and even Hemingway (one of the last of that generation to pass on) has been dead for over fifty years.  But then the truth is, according to me at least, that there's something vaguely romantic about the scruffier bars of Paris, the ones without the glamorous histories.  Truth is alcohol is a universal truth in the City of Light, and there are any number of bars happy to accommodate the least promising of literary dreams.  Some will be romantic. if plain (though there's always someone reflecting in your glass)..... 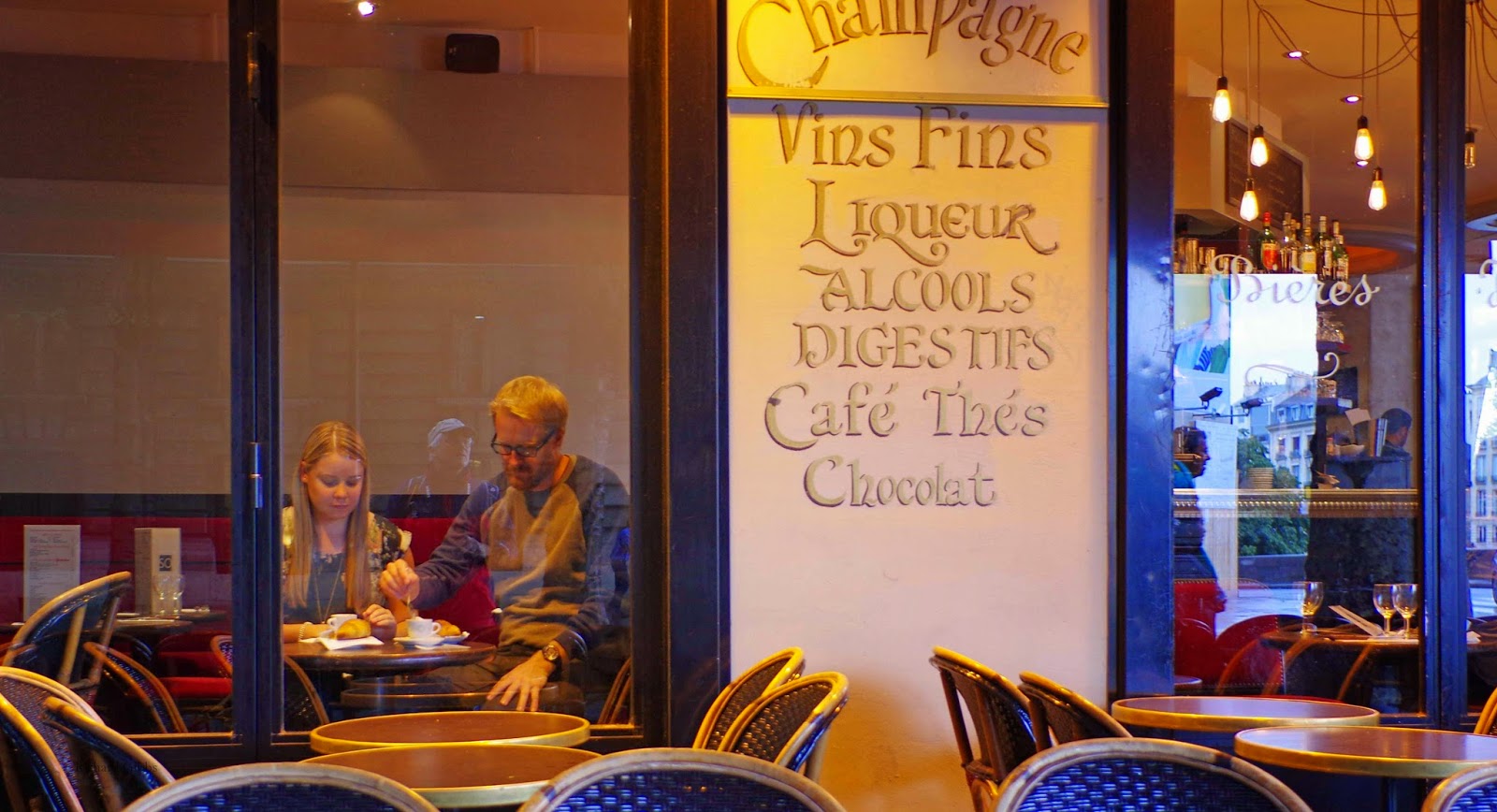 Others will be more public..... 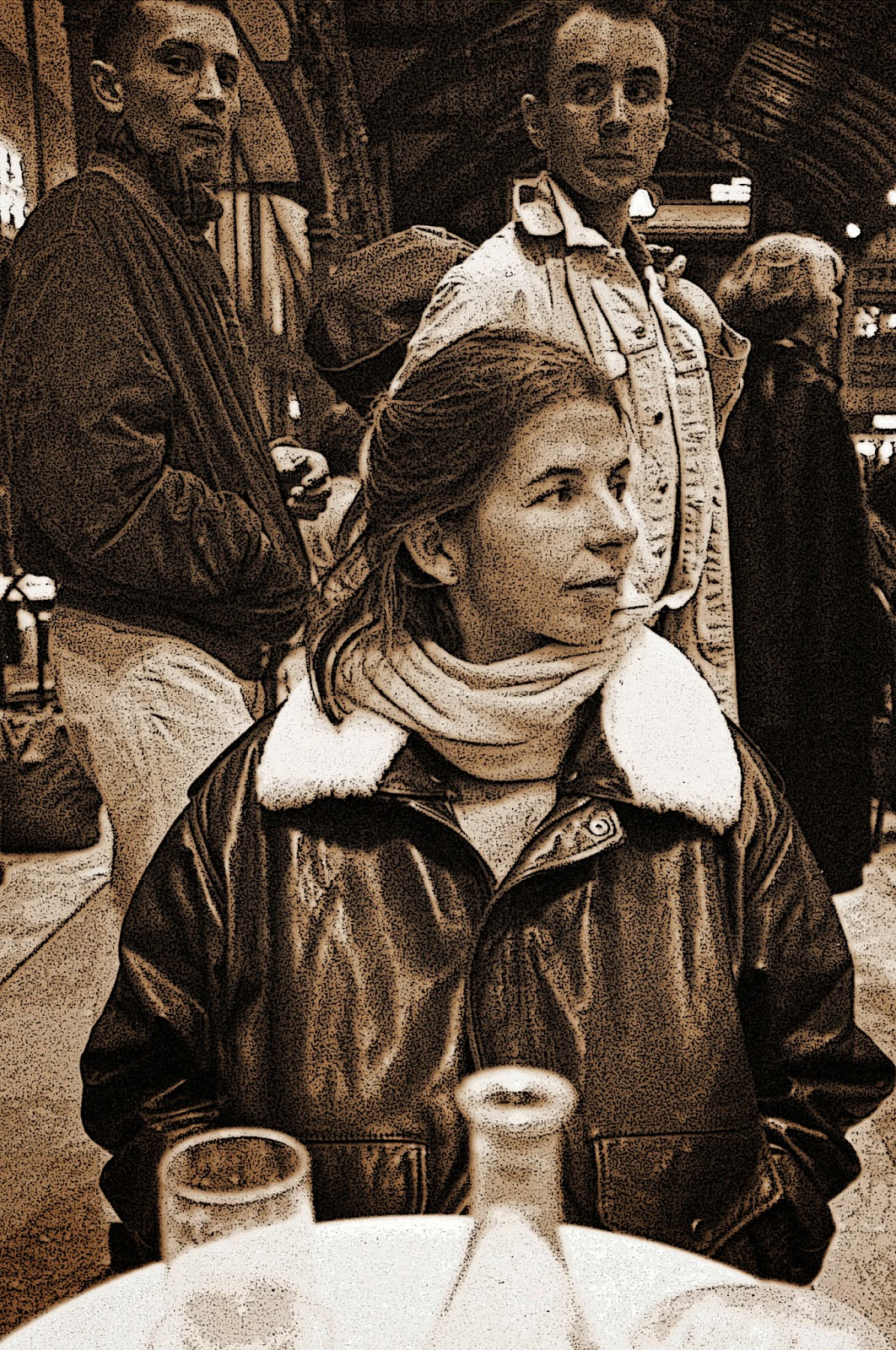 And some will be more of un cauchemar.... 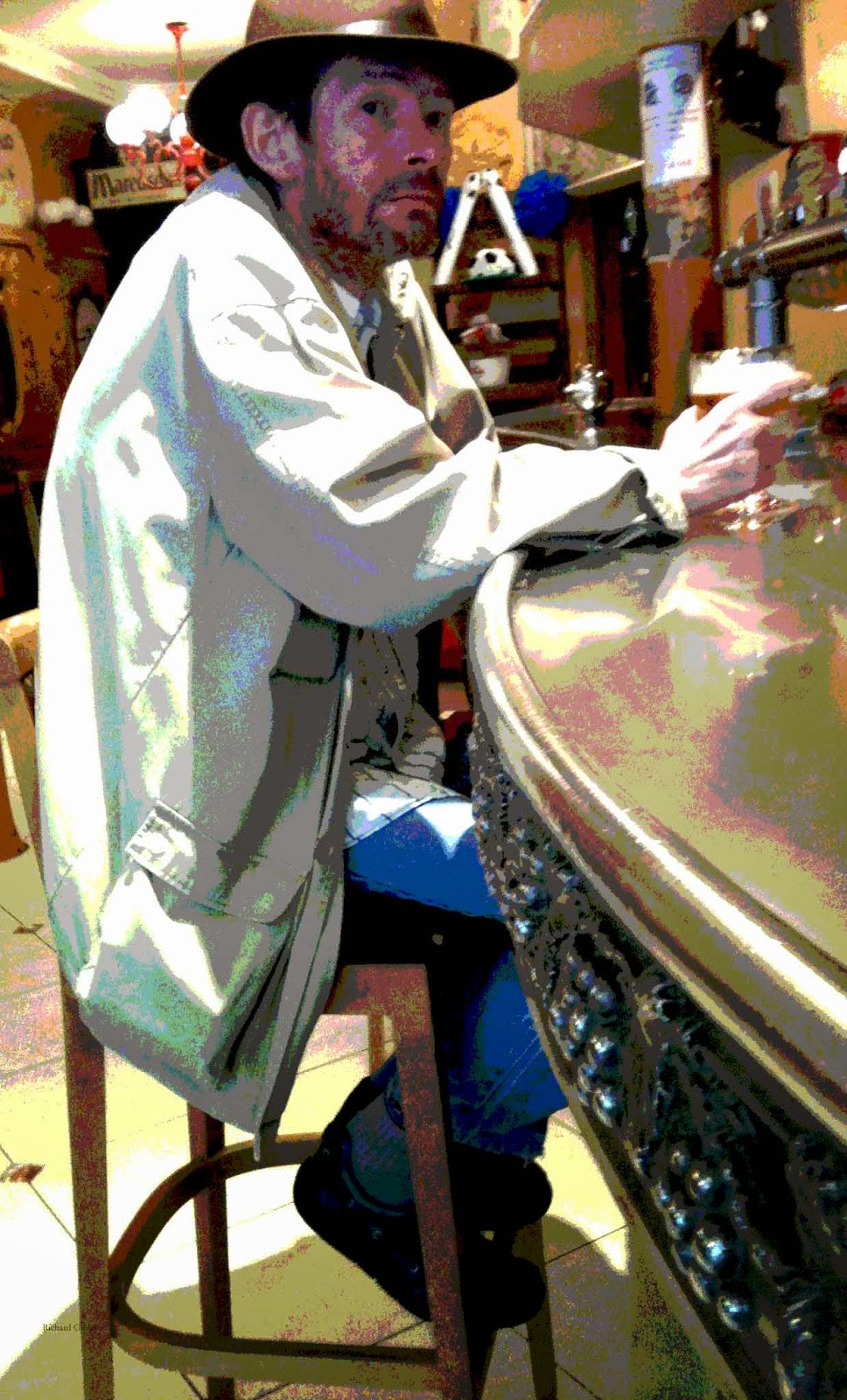 While there are still plenty of places to treat yourself, pretending that the royalties will eventually come through... 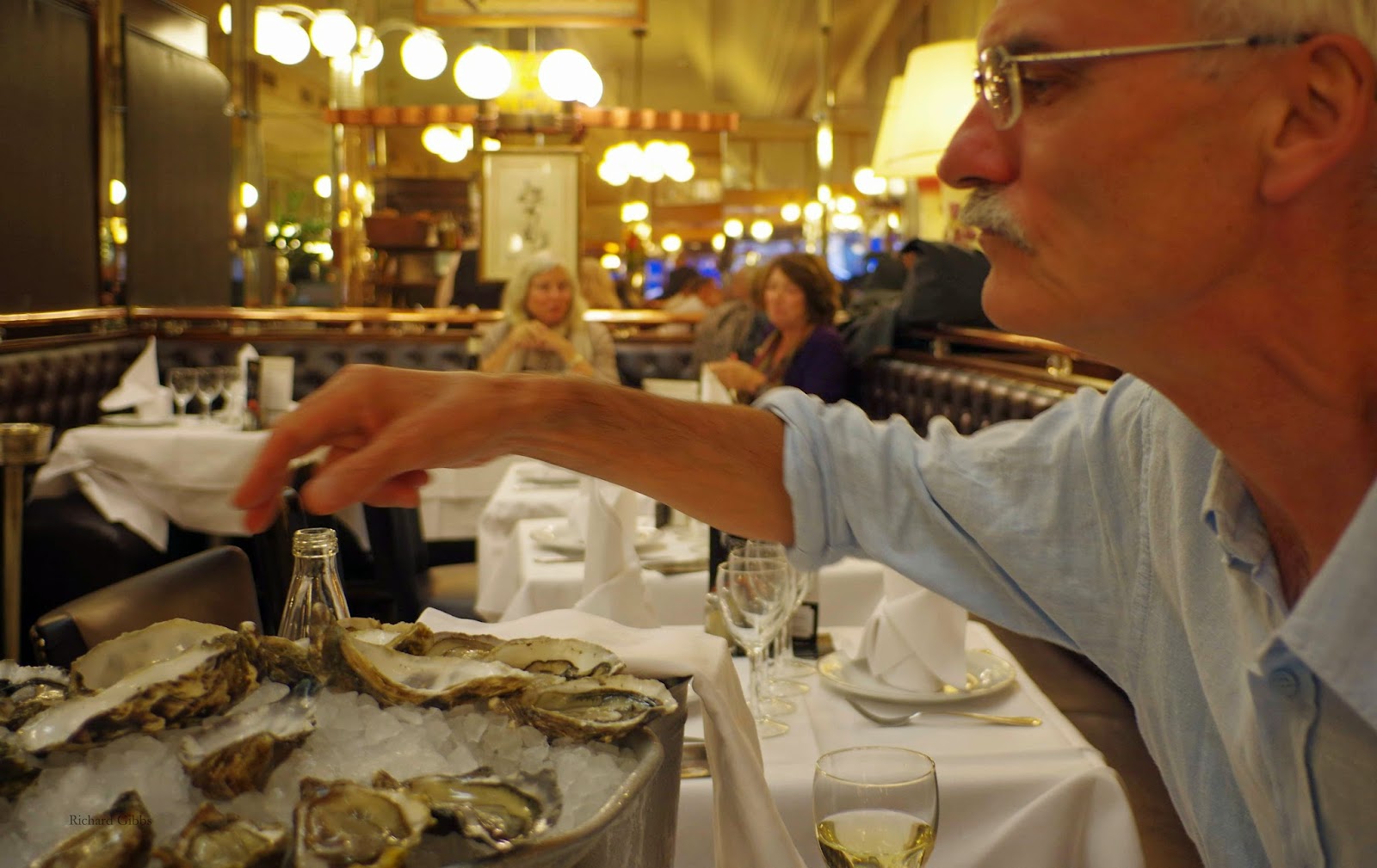 Among the Americans who made something of Paris was Jack Kerouac, who hit town just a few years before me, attempting to track his French roots.  In Satori in Paris he records, in characteristic helter-skelter style, his arrival, and his brief sojourn. Like many before him, and since, there was a hint of alcohol about his experience. Towards the end of his stay he tries to see his editor in his French publishing house.

"He's out to lunch too."  But the fact of the matter was, he was in New York that day but she couldn't care less to tell me and with me sitting in front of this imperious secretary who must've thought she was very Madame Defarge herself in Dickens' "Tale of Two Cities" sewing the names of potential guillotine victims into the printer's cloth, were a half dozen eager or worried writers with their manuscripts all of whom gave me a positively dirty look when they heard my name as tho they were muttering to themselves "Kerouac? I can write ten times better than that beatnik maniac and I'll prove it with this here manuscript called 'Silence au Lips' all about how Renard walks into the foyer lighting a cigarette and refuses to acknowledge the sad formless smile of the plotless Lesbian heroine whose father just died trying to rape an elk in the Battle of Cuckamonga, and Phillipe the intellectual enters in the next chapter lighting a cigarette with an existential leap across the blank page I leave next, all ending in a monologue encompassing etc., all this Kerouac can do is write stories, ugh"

As Papa Hem said, This book is fiction but there is always a chance that such a work of fiction may throw some light on what has been written as fact. Over the years I have had great times in Paris; I've met all the great painters, performed in all the theatres, written all the great novels, and drunk all the great wines.  I'm almost buried in all the cemeteries, and, like Mesrine, I have robbed all the great banks. Oh, and like Jean Paul Belmondo, Alain Delon, Gerard Depardieu and Daniel Auteuil, I have been in all the great films, mais.... 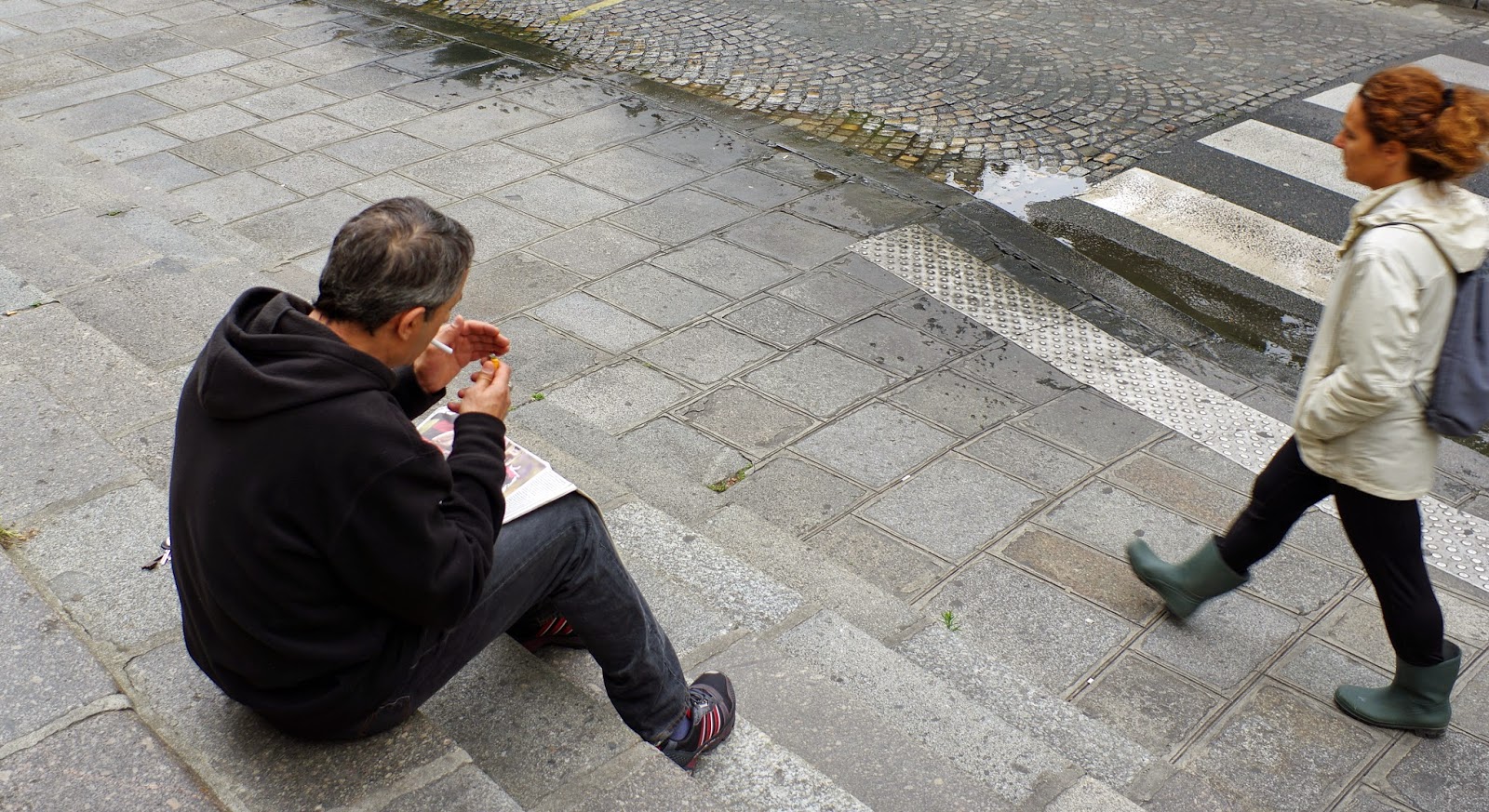 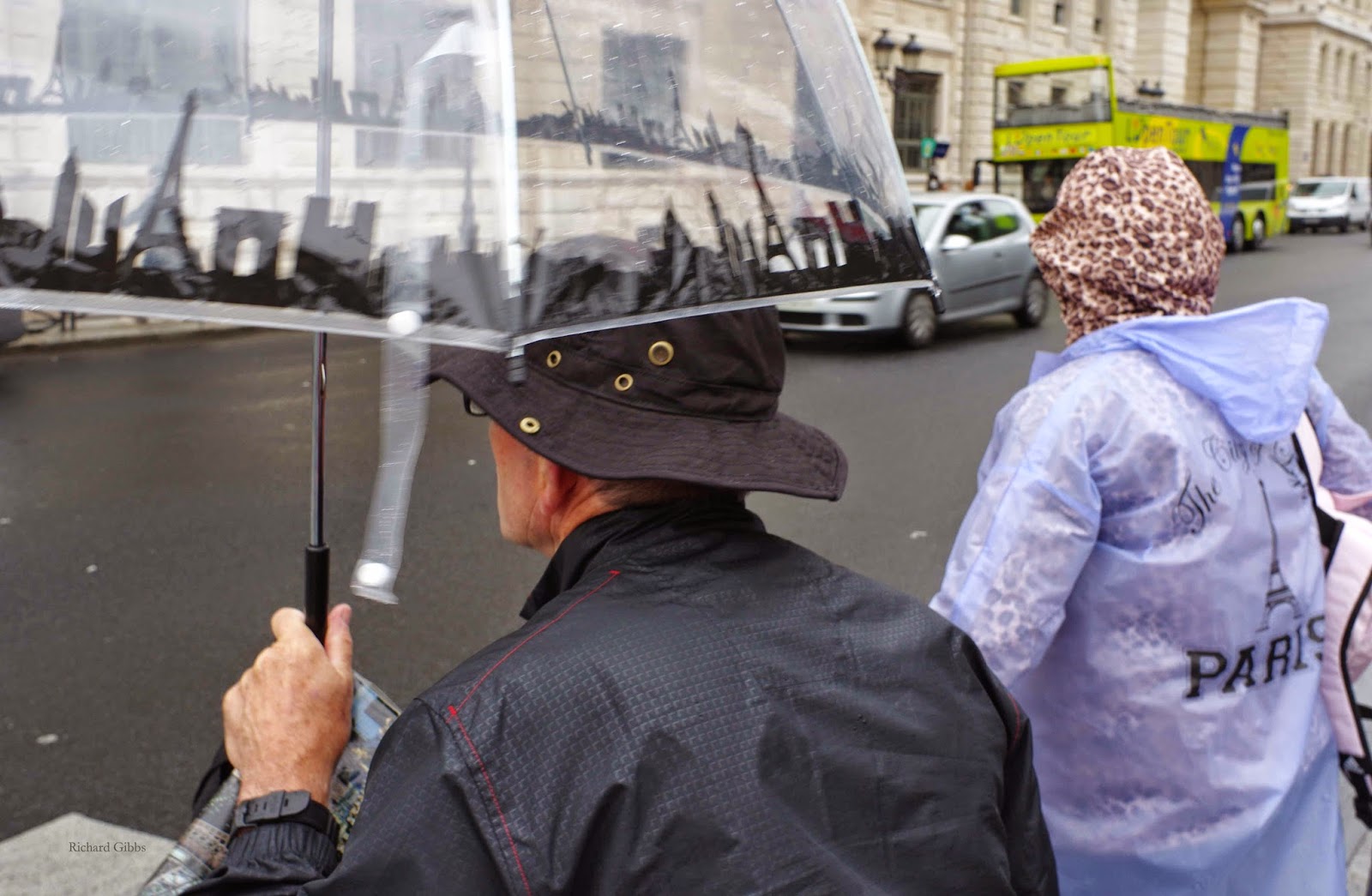 Though the light may not always be perfect, and the rain may glisten the trottoirs, I love Paris - always have, and always will! 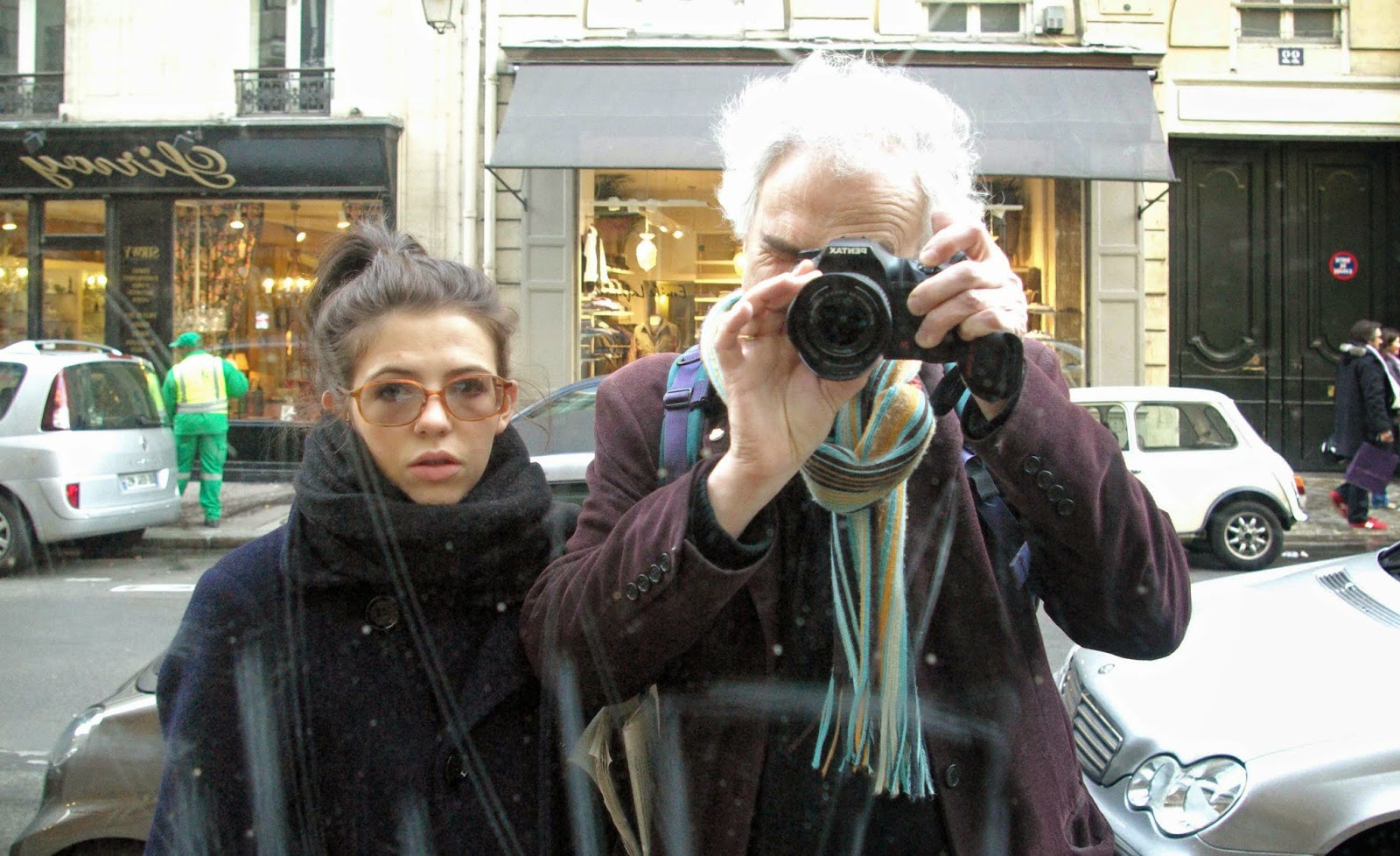