The Veneto and Friuli 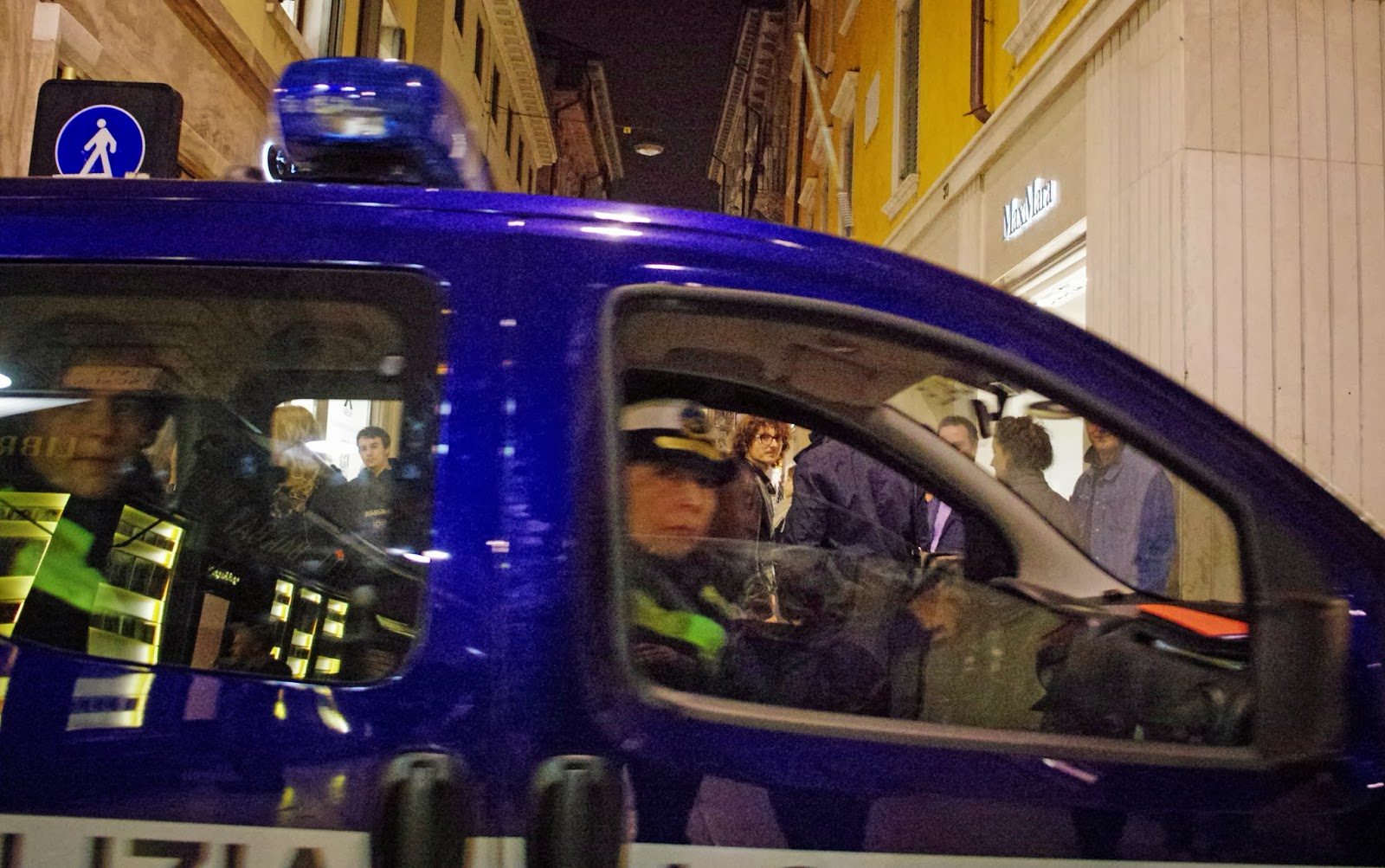 On October 3rd, 1924 D H Lawrence wrote to his friend John Middleton Murray, The autumn always gets me badly, as it breaks into colours.  I want to go south.....  OK, so he was already a dying man, but we know the feeling.  As the clocks go into reverse, and the winds whip the Atlantic Ocean into our backstreets, it is time to find some cheer somewhere.
So we go to Italy, full of hope for light skies and straight plumes of woodsmoke rising from the orange chestnut woods.  Where every distance is not near..... 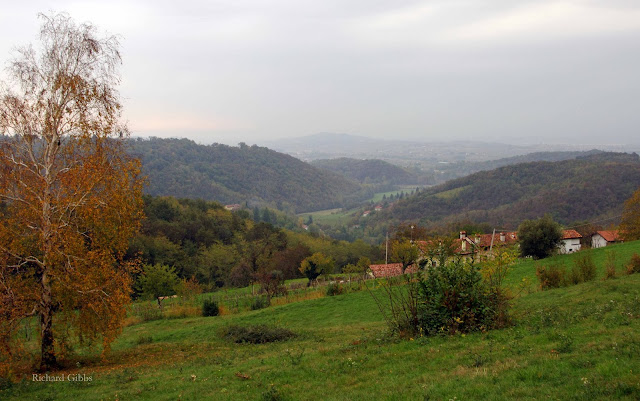 But it is night in Verona.  The police are on the prowl.  Tradition says it is time to wear woollen clothes, and the streets glisten with a seeping humidity. 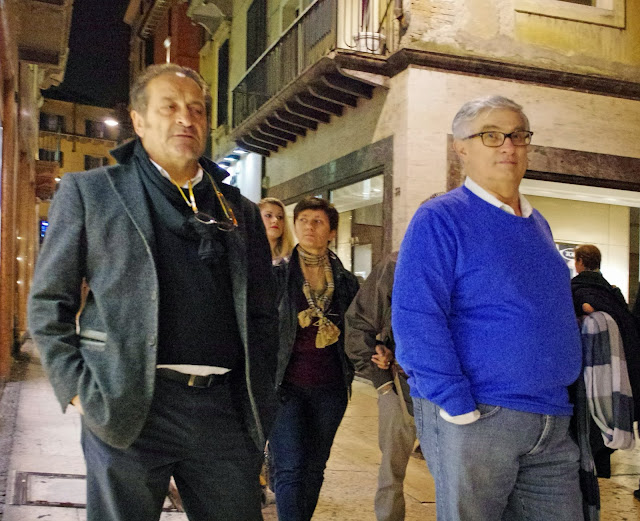 Roberto Vecchioni wears a leather jacket, and looks a little unsure of himself. 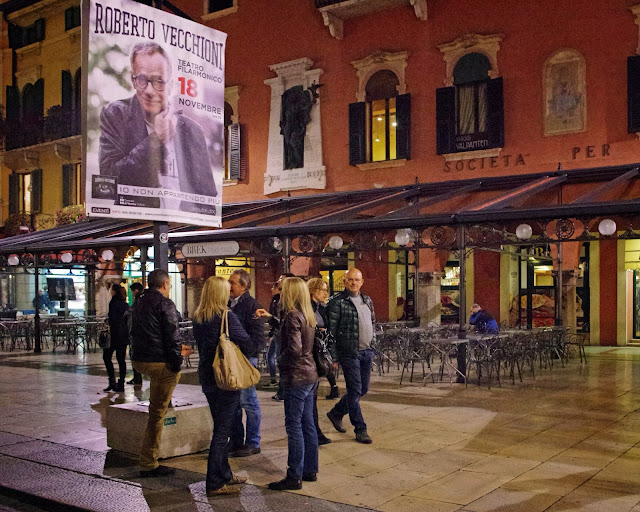 The ancient heart of the city is dark, and there is no sense of the Shakespearean heat that led to open brawls. 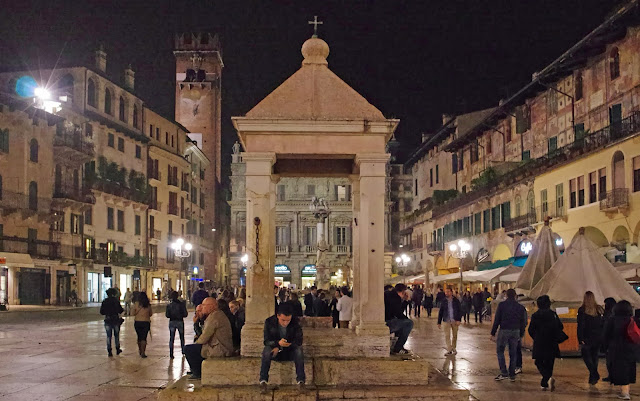 So we take refuge in the bright interior of Al Bersagliere, a favourite haunt, where we are well looked after (a Bardolino classico, maccheroncini with bean and sausage sauce, grilled tomino cheese and thinly sliced aubergines, scaloppine al vino bianco....) and the choice on the Wurlitzer has not changed since Barry White had a hit with It's ecstasy when you lay down next to me. 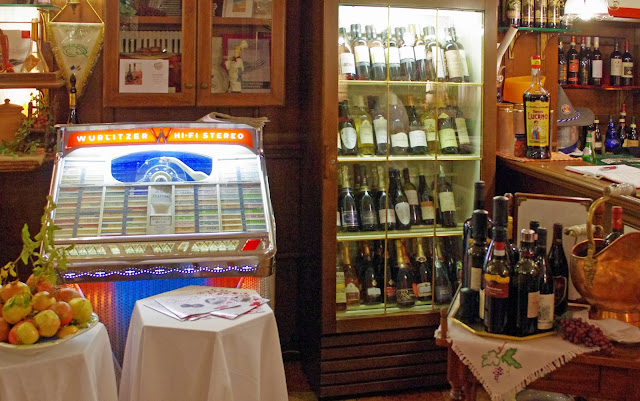 Then back out into the garish autumnal night, where kids drink wine at the gates of the amphitheatre and the ancient stones reflect the garish disco street lights. 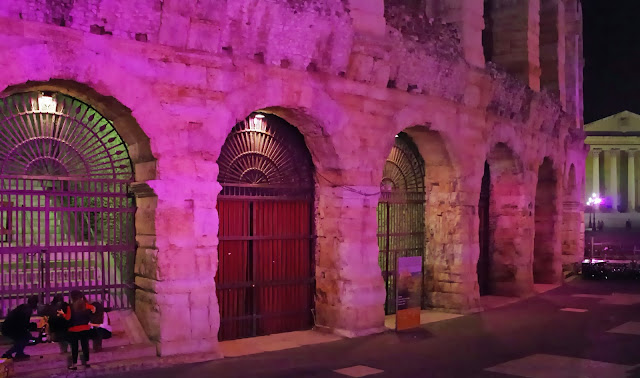 The next day, courtesy of Trenitalia's Freccia Bianca, we are in Venice for a snack lunch.  The autumnal colours of the washing blend nicely with the ochre of the walls, and we wander abroad in shirtsleeves. 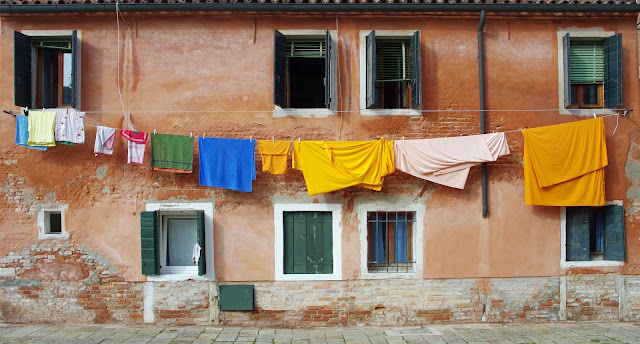 The cold cuts are Friulian, the wine Soave, the chef Sardinian, but the ambiente is solidly Veneto. 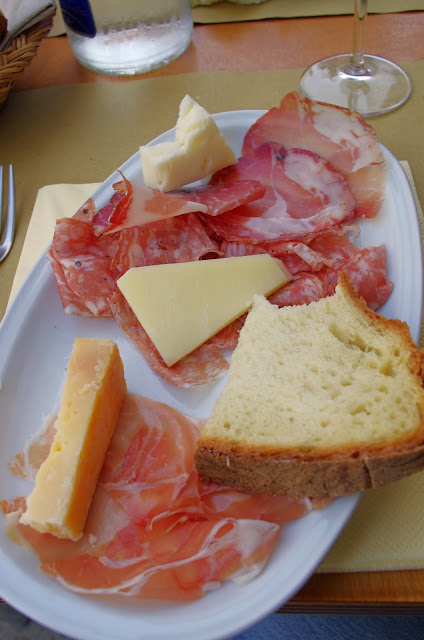 This part of the world is designed for snacking.  An ombra here (the local name for a glass of wine, said to derive from the tradition of drinking in the shadow of the Campanile in Piazza San Marco) and another there.  We stroll from bacaro to bacaro, from Bancogiro to Cantina do Spade.  A shadow of Prosecco spento, with baccala mantecato, then an espresso and off again.... 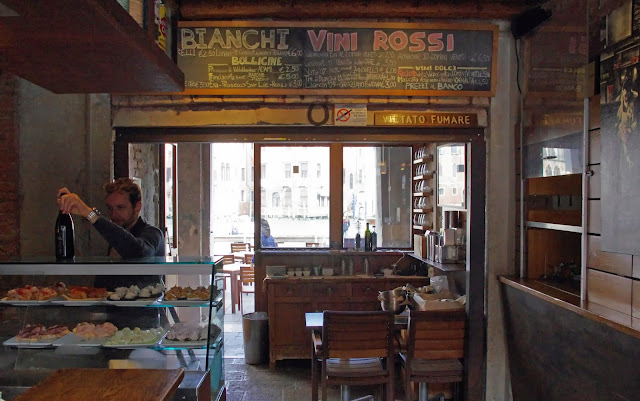 Venice is crowded, and yet there are still quiet corners.  It is not all Guggenheim and Doges. 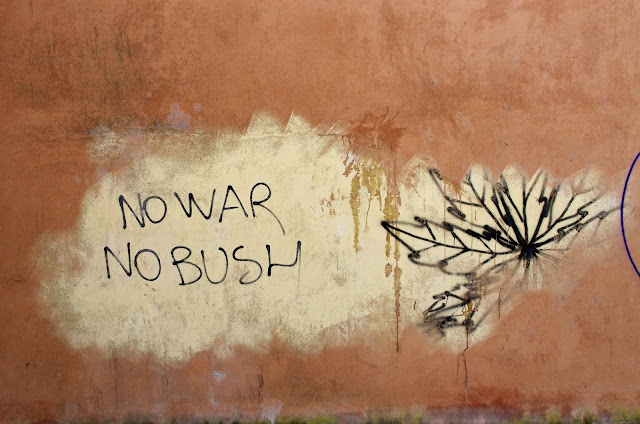 ﻿
Though it is art, and it is memory.  Ironically, Sir Anthony Caro lives on at the Correr: 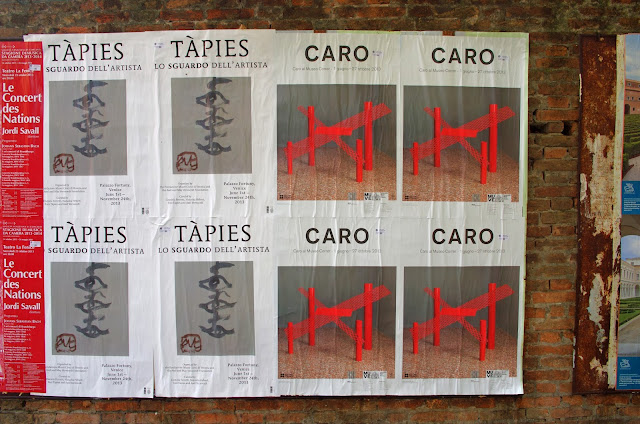 And people do still live here.  Even Caruso has an apartment on the Dorsoduro..... 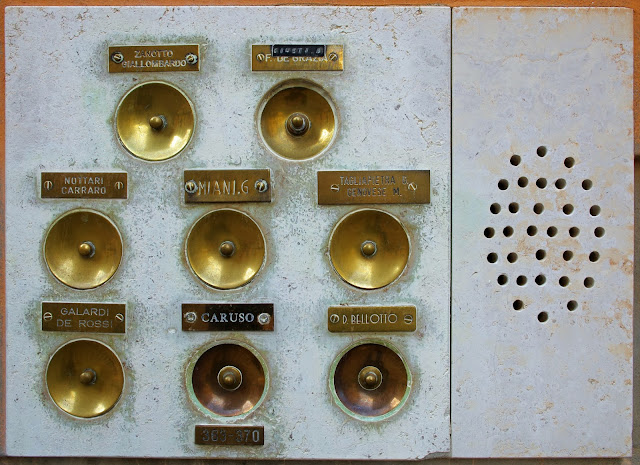 But you cannot get away for long from the Grand Canal and its Great Palaces, 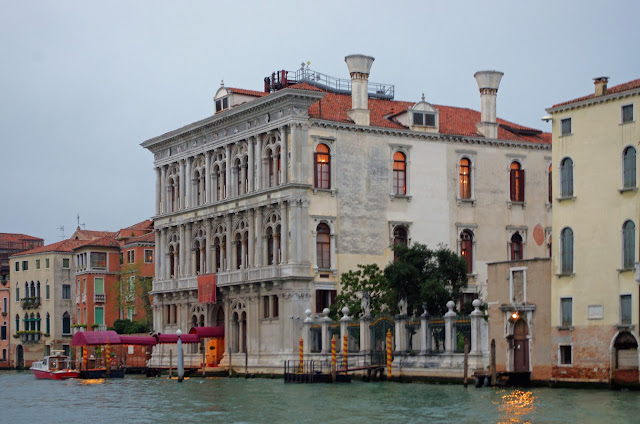 Nor avoid the elegance of the gothic Ca d'Oro: 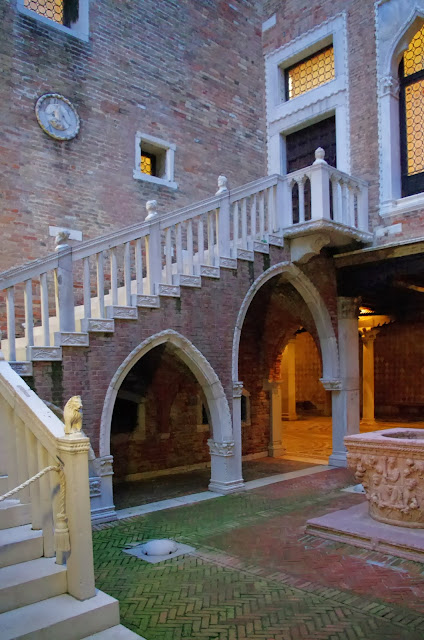 Nor can you hide from the expressions here of wealth and power, whether they are in bricks and mortar, or in the 3,643 tonnes of steel and aluminium of the Carinthia VII, which is owned by Heidi Horten, the widow of a German entrepreneur.  This mobile home has 28 crew members and can take 12 guests.
﻿
And then, as Zebedee said, it is time for bed.  Our room romantically perches high above the fish market, over one of the oldest restaurants in Venice, Poste Vecie (the old post office) which I first stumbled (literally) into by the back door nearly forty years ago. 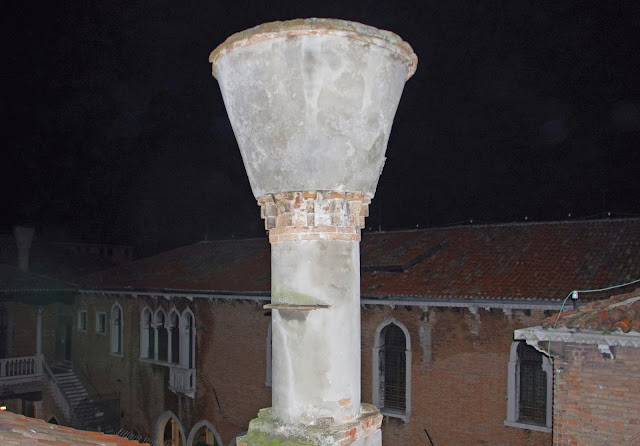 In the morning we move on.  We stop in Udine, once a fair city, and where my father was at the end of the war, shortly after the Germans withdrew in the summer of 1945.  But an earthquake in 1976 shook some of the romance out of the old city, and rebuilding has not embellished it now.  Remarkably the Piazza della Liberta, with the sixteenth century Porticato di San Giovanni have survived, but, despite the excellent cooked ham and Tocai we enjoy at Al Fagiano, where quite possibly my dad might also have drunk, something is missing..... 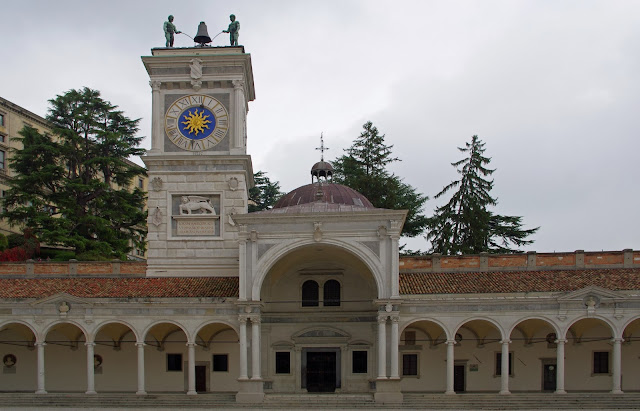 ﻿
So we move on, again.  Into the autumn, into Friuli, and towards Slovenia and the mountains, where the Italian language merges into Friulan, and, as seen below, the official name of the village of Prepotto is not that favoured by the locals. 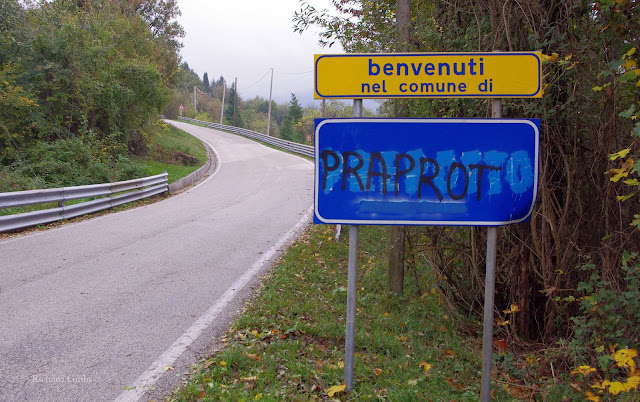 It is quiet here, and gently autumnal, though crispness evades us.  Instead there are the mellow fruits; pomegranates shiny red in their trees; persimmons (cachi) heavy on their boughs.... 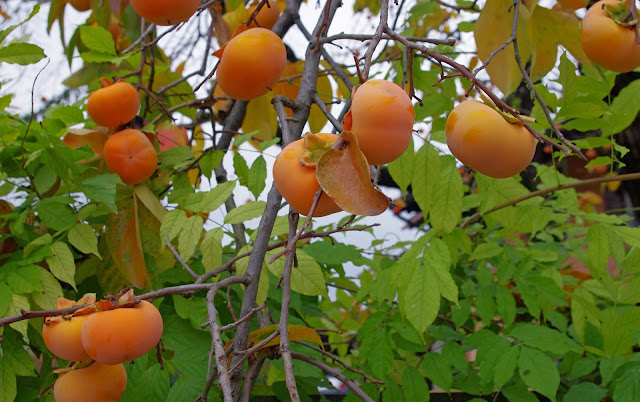 And mists rising from the Natisone as it cuts through Cividale del Friuli: 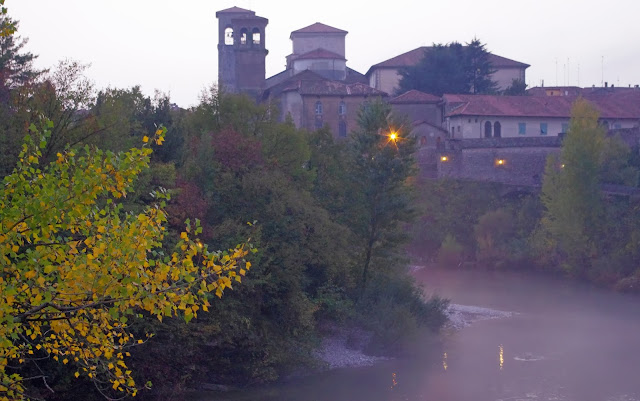 Cascades of red leaves falling towards the gorge: 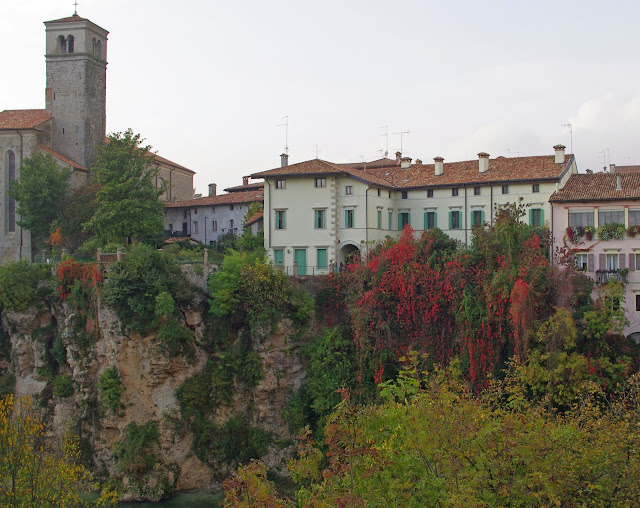 And then we take bicycles, and head towards the mountains, weird mushrooms such as Clathrus Ruber, the Basket Stinkhorn,  at large in the woods, 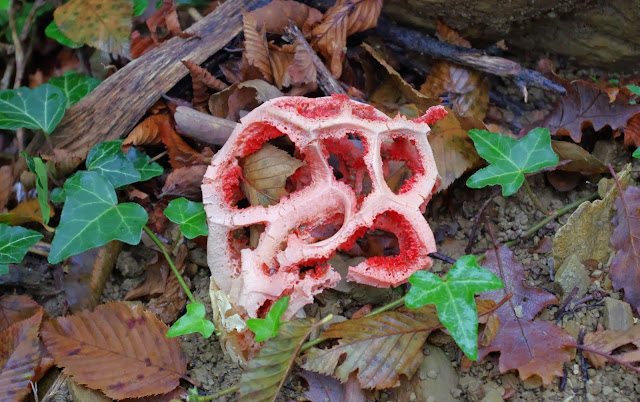 And yellowing vines slipping away into the valleys.  But the weather is not with us.  Grey skies darken, our target, the sanctuary at Castelmonte disappearing into thick cloud.  We turn to descend again, but soon raindrops begin to spatter us. 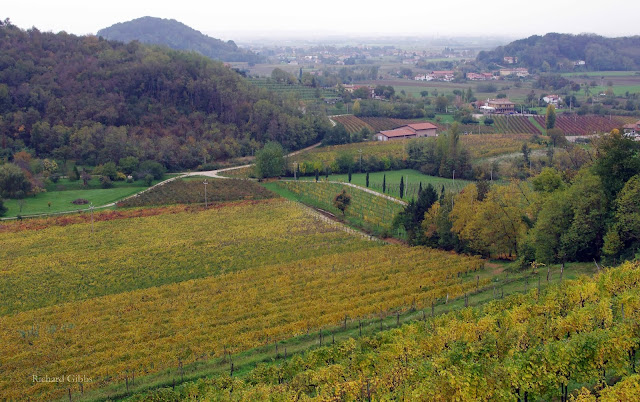 And we are forced by cloudburst to take shelter in the Osteria Mezzomonte.  The dreamt-of brightness of autumn is found in the fireplace: 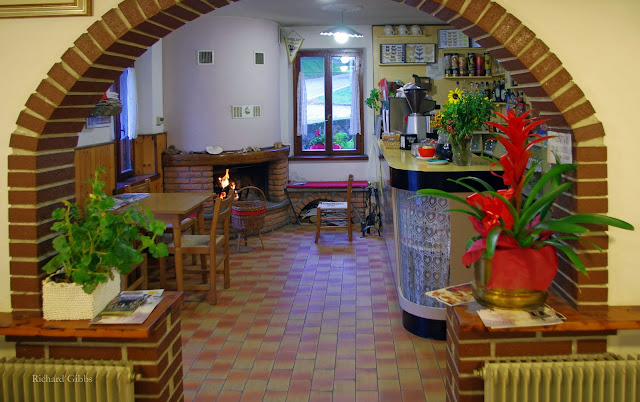 And the old-fashioned place is full of brightness and welcome.  We refresh ourselves with local Schioppettino, and restore our strength with cheese, polenta and frico with onions, a speciality made from potatoes and montasio cheese.  Andrea, our host, talks enthusiastically about the Eagle Owl that roosts in one of his empty chimneys, and has displays of moths and butterflies in cases behind the bar. 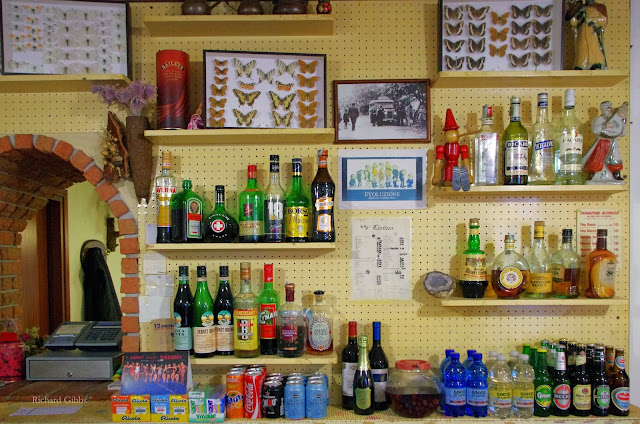 We may not have found Keats's beaker full of the warm south, nor entirely avoided the melancholy that D H Lawrence so loathed, but we have found a piece of Italy that time forgot and which revives the flagging spirit.  In the brightness of this remote inn there is the paradox of autumn.  As nature decays, so life is restored.  As the bright colours of leaves flare up, so the plants die down.  One man's south is another man's north.
I step through the back of the inn, to watch coal tits and a nuthatch feeding on a bird-table, then, turning, I notice the trophies on the wall.  Curious how these disturbing decorations remind me that the Italian for "Still Life," is "Natura Morta." 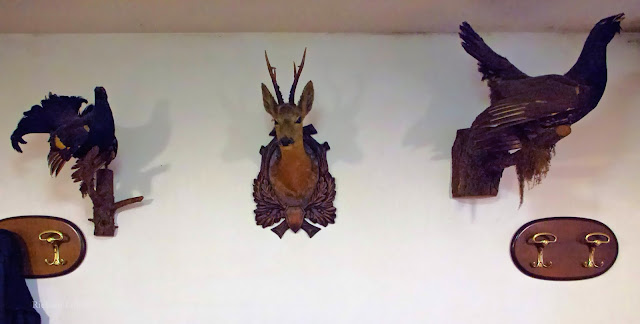 But I, being fond of true philosophy
Say very often to myself, 'Alas!
All things that have been born were born to die,
And flesh (which Death mows down to hay) is grass;
You've passed your youth not so unpleasantly,
And if you had it o'er again - 'twould pass -
So thank your stars that matters are no worse,
And read your Bible, sir, and mind your purse.'
George Gordon Noel, Lord Byron
Growing Old 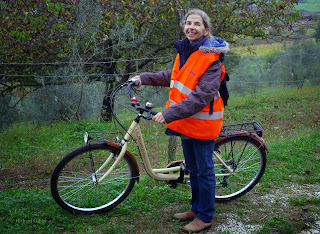