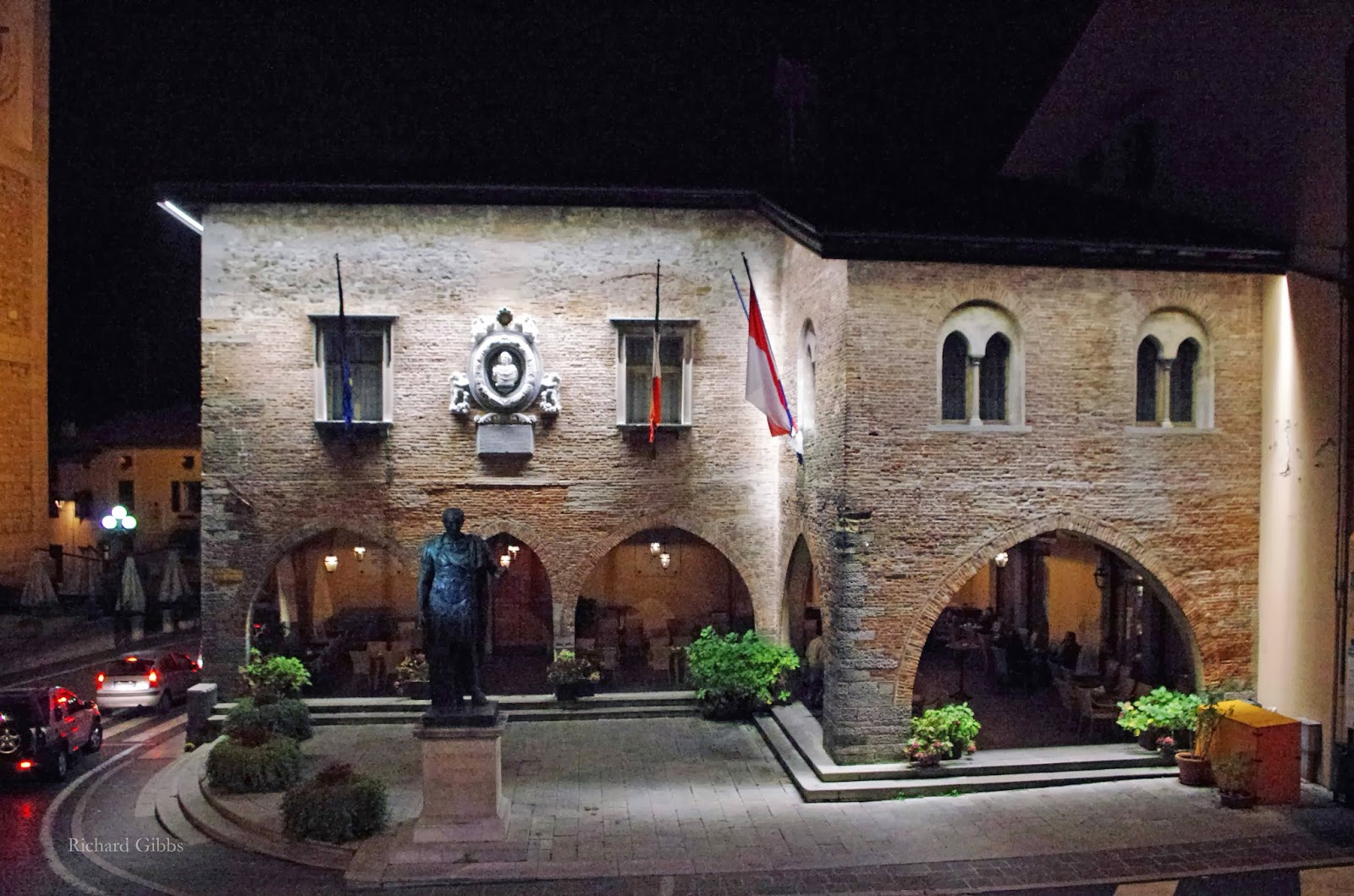 Julius Caesar - Giulio Cesare to his friends - stands all night in front of the town hall, as if waiting for a bus. This statue, a copy of that which guards the Campidoglio in Rome, may occasionally be seen sitting in the bar, or slinking off to rest awhile in the Roman House just next door. But then this is a quiet town, and despite over two millennia of quite complex history, nothing much happens here, especially on a Monday night in November. 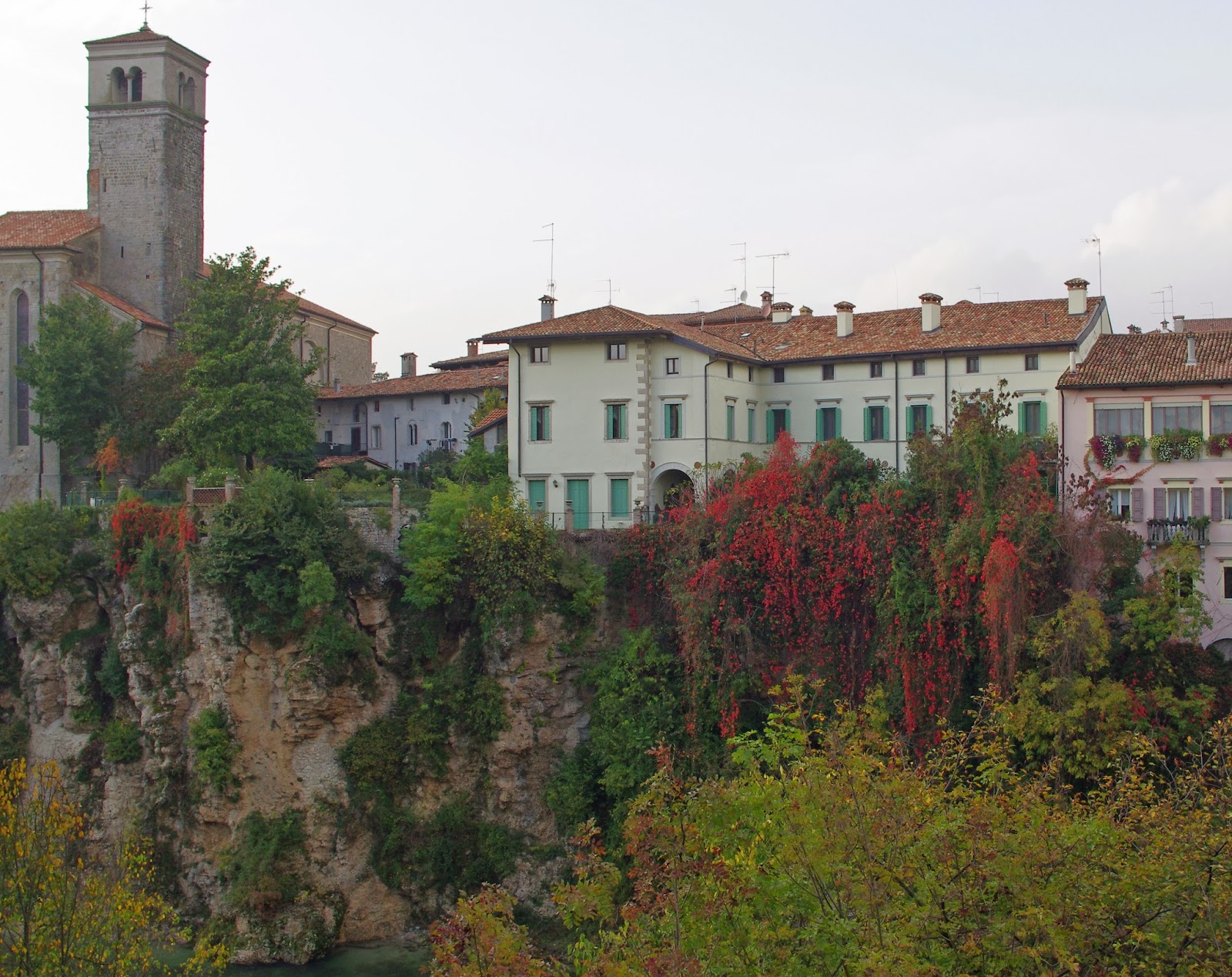 Giulio first came here in 50 BC, though of course he didn't know what year it was.....  He was impressed by the Celtic culture, and probably by the local wines, and set up a Forum here, (which I believe was an early type of Internet where people met and exchanged inanities).  Anyway, unintentionally, his Forum Iullii (which uses his name in Latin with a touch of the genitive) gave its name to the region, now known as Friuli.....  (There's one for QI?)

The town flourished, and became one of the most important centres in the area, both for commerce and for military reasons.  Which is why, a mere half millennium or so later, the Longobardi (literally Long Beards, though some would have it that the name originates in their adherence to Odin, anyway they are better known as Lombards) decided it would make an ideal place for their capital of the Primo Ducato Longobardo in Italia (their origin was in the far north, and like modern Germans, they liked to place their towels in the sun).  Indeed, Cividale was not only home to the Lombard Dukes, and Kings, but also to the Patriarchs of Aquileia, so it was a bright spot in what we tend to call the Dark Ages. 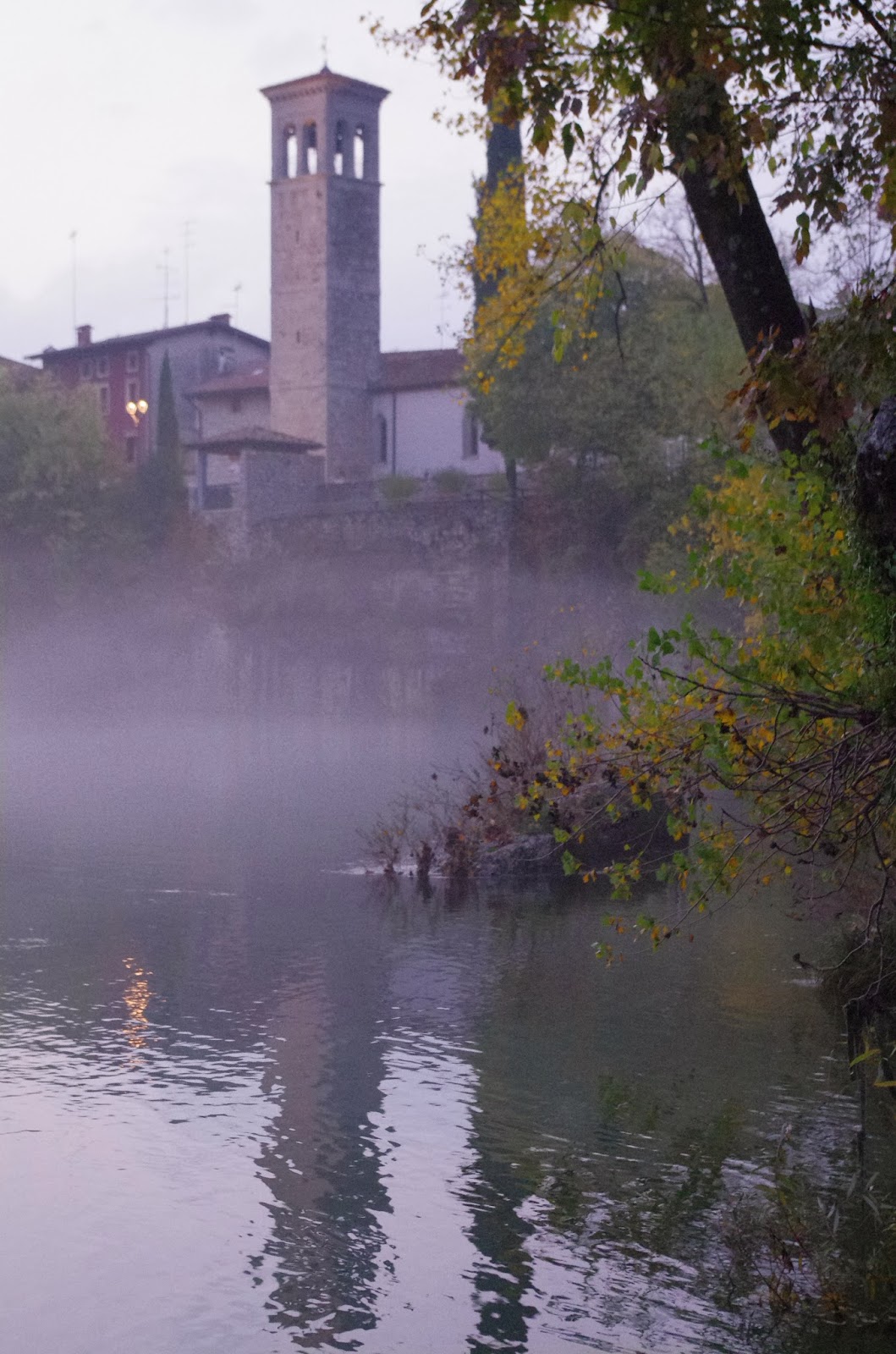 While they were there (that is, very roughly, between 568AD and 774AD) the Longobardi adopted the oratory of the Convent of Santa Maria in Valle, which hangs precariously over the river Natisone, and it is now known as the Tempietto Longobardo, even though the frescos and wooden choir stalls are from the later Middle Ages.  It is an extraordinary little chapel, with beautiful stucco figures and intricate decorations.  I am afraid that photography is not allowed here, so please imagine it in the space below...... 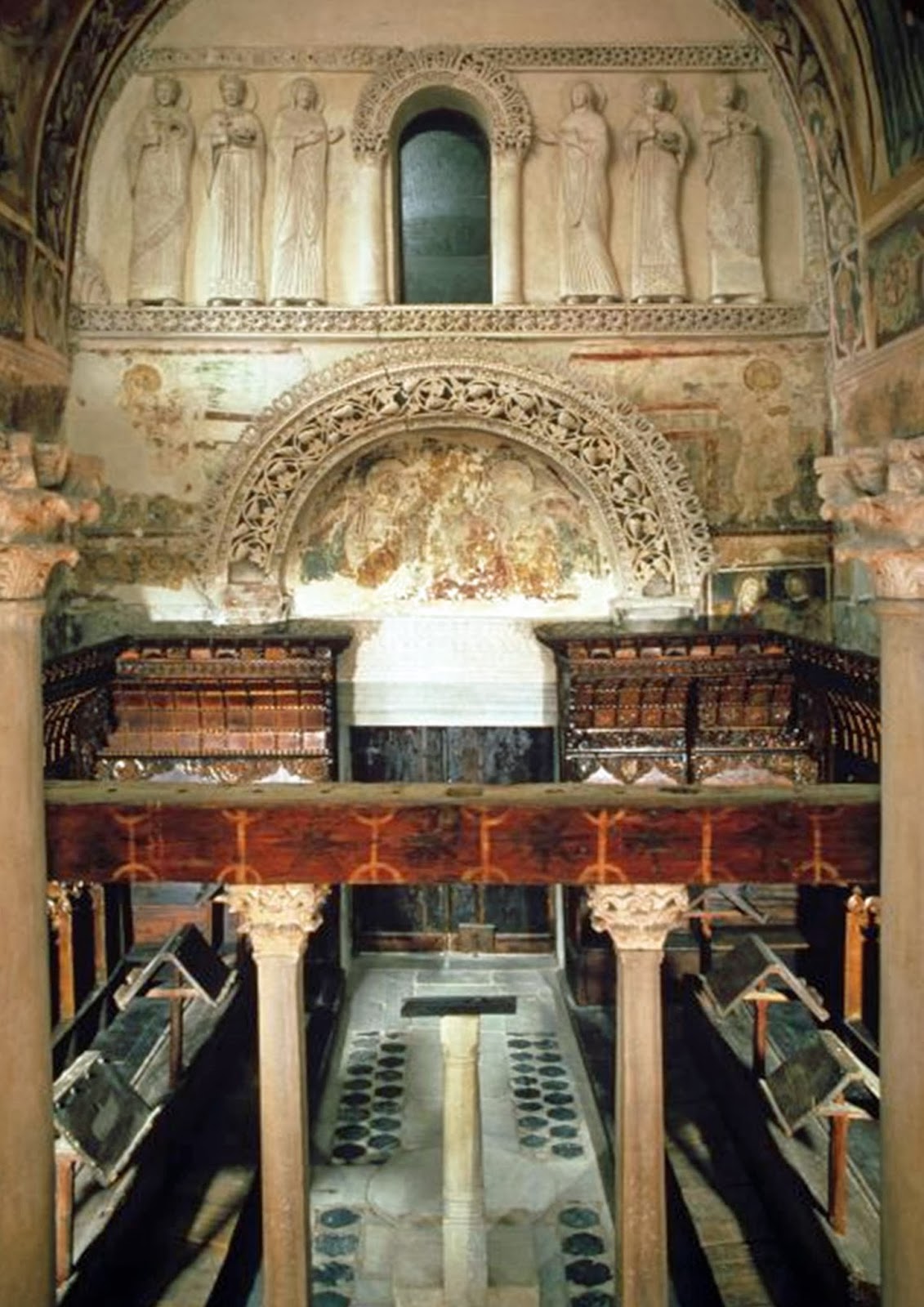 Outside, persimmons droop above the river looking east towards the hills of Slovenia. 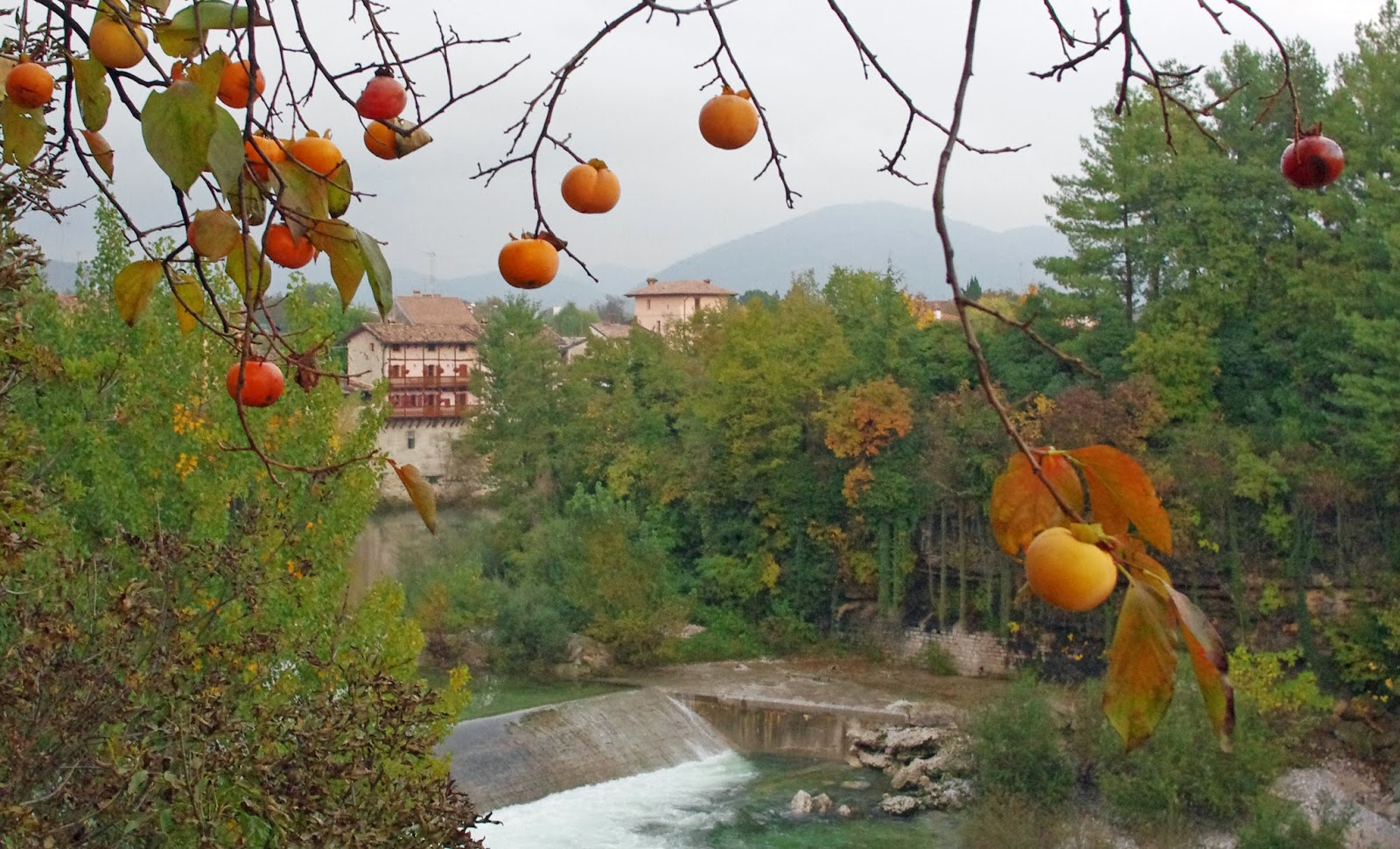 Inside the convent the graceful refectory is now used for civil functions, ceremonials, and meetings. 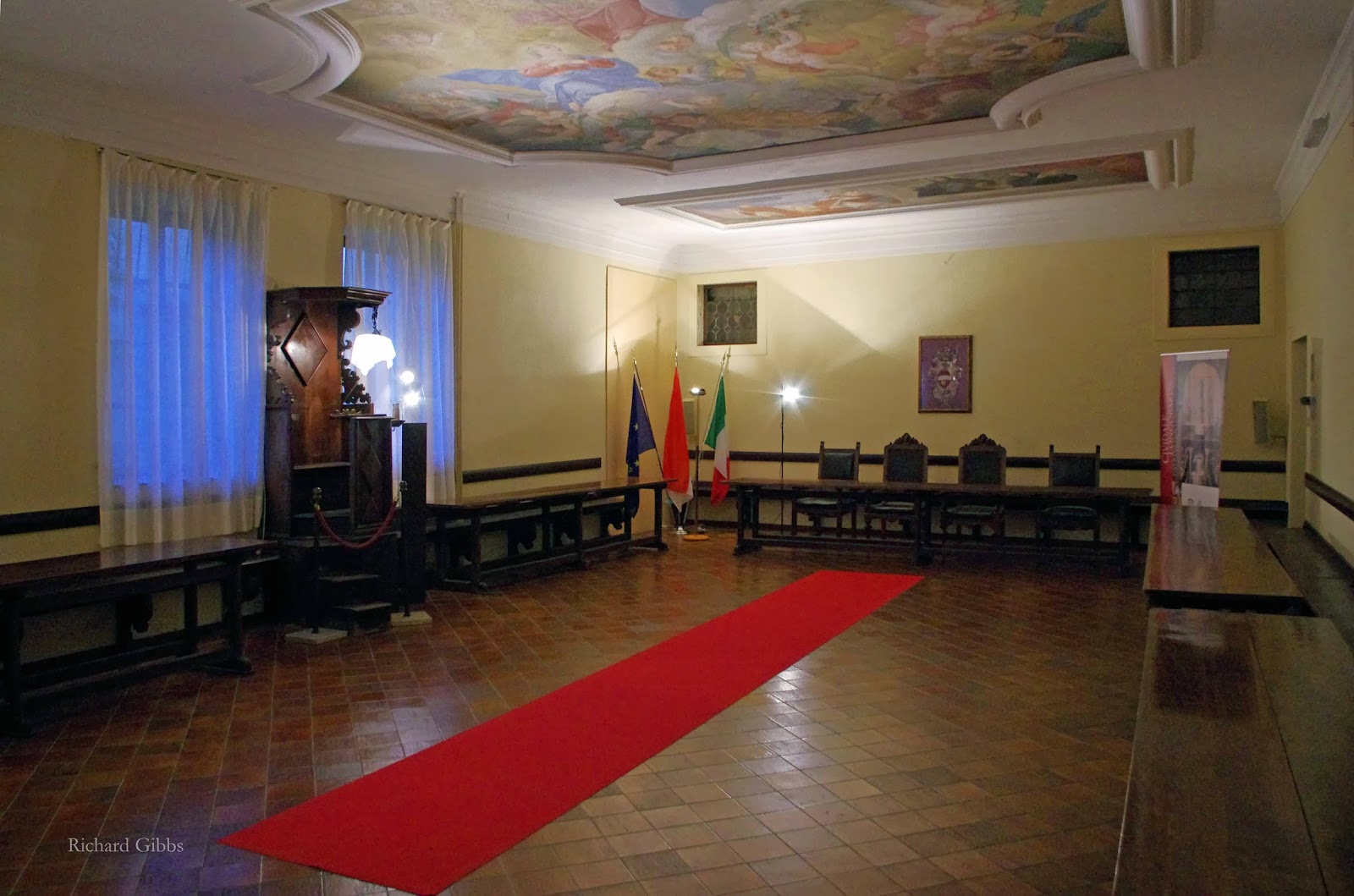 ﻿
And the cloister has a well kept, peaceful air that picks up on the civilised nature of this town.  The Monastery of Santa Maria in Valle is now a cultural centre, owned by the municipality. 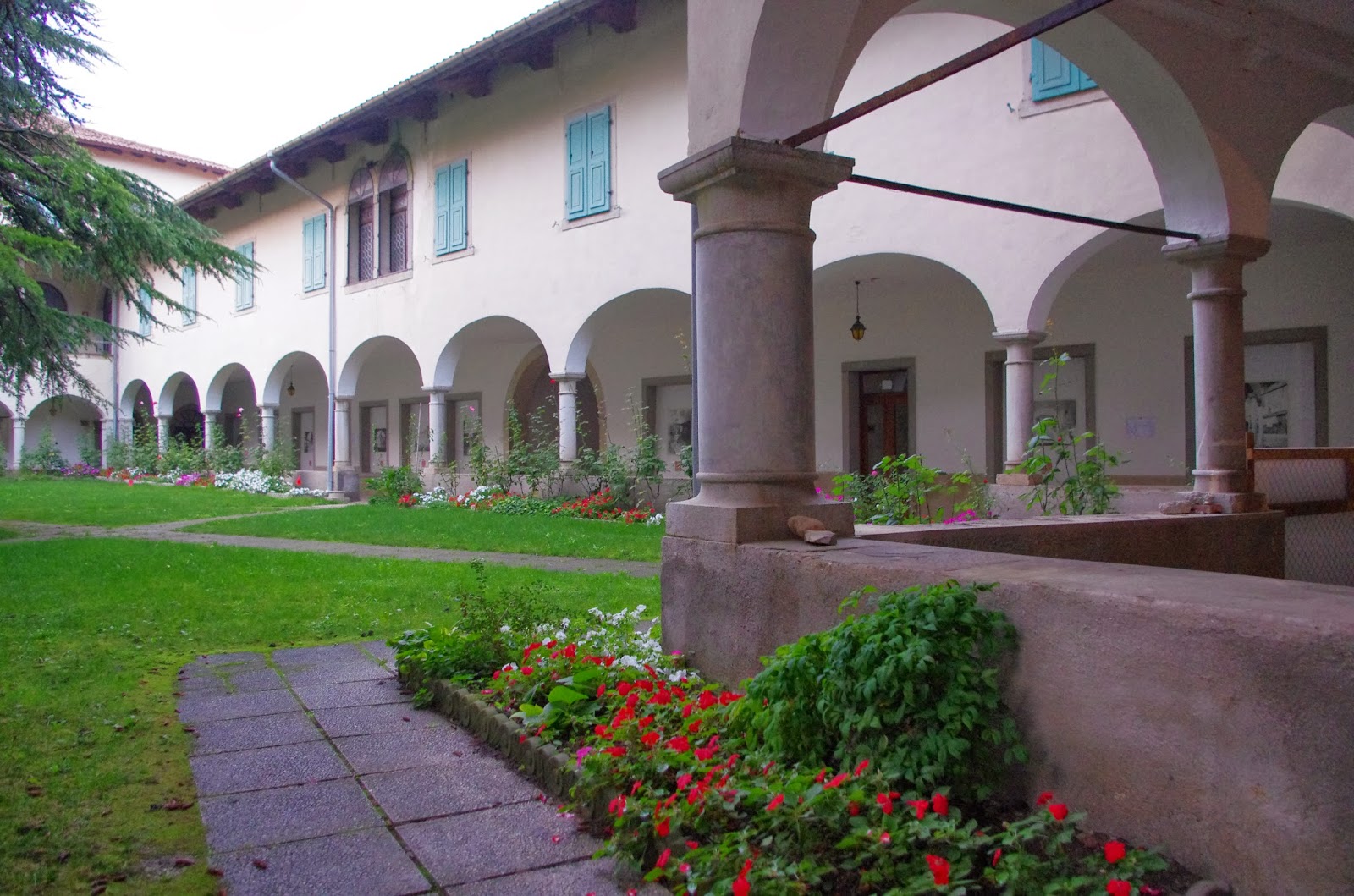 The Lombards had a chronicler in Paolo Diacono (Paul the Deacon) who is commemorated in a square of the same name in Cividale, and here is found the Cafe Longobardo, where loud music and wet plastic seats remind the visitor that times change. 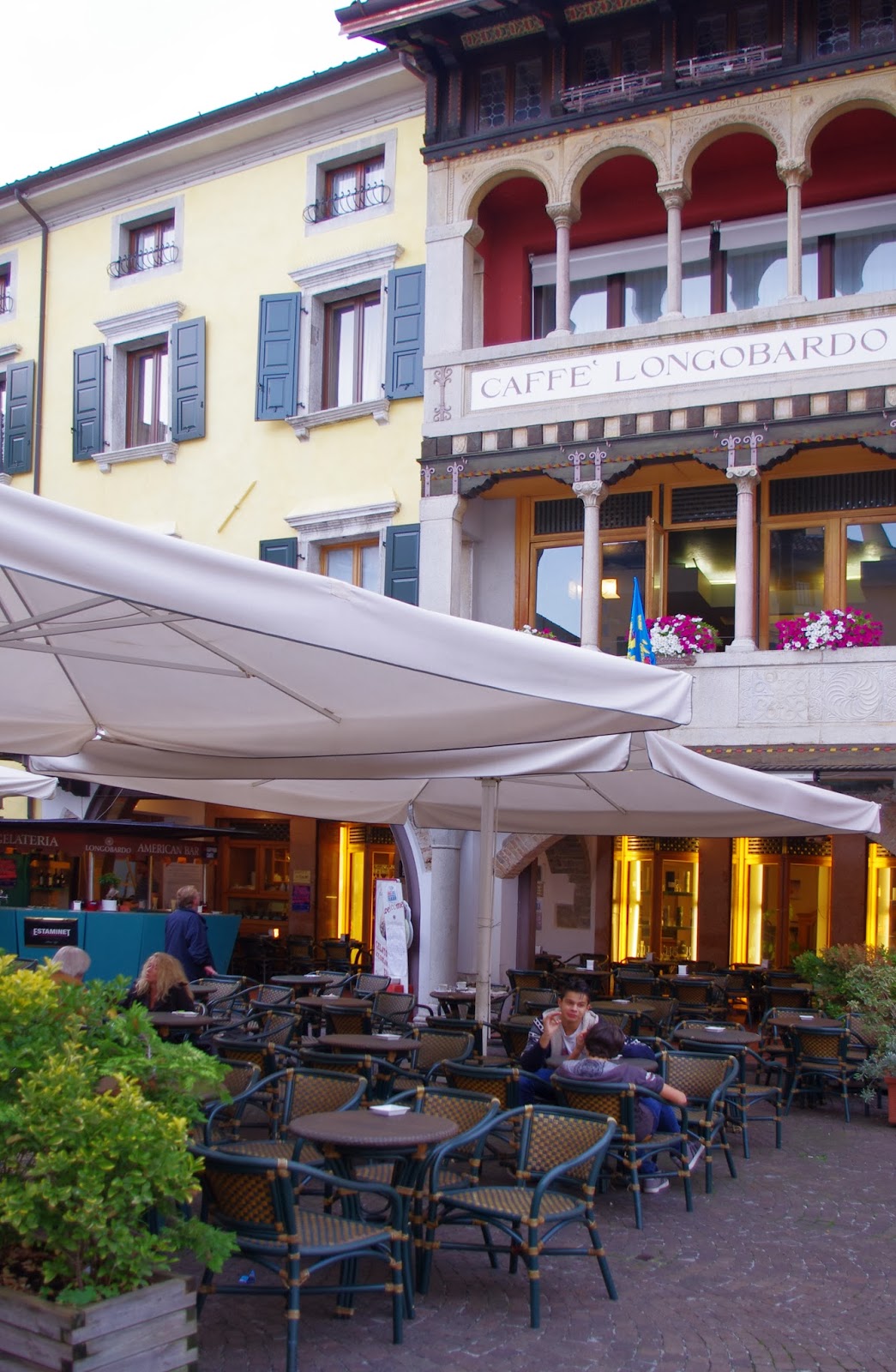 However, there is a neat illustration on the wall of the Café as to how this part of Italy has a tendency towards the north and east.  The Longobardi may have been ousted by Charlemagne, who instituted a Frankish regime in 774AD, but in later times Cividale, (for some time called Civitas Austriae, which means Eastern City, giving a clue to how Austria got its name) was ruled by the Republic of Venice, the Hapsburg Empire, Napoleon, and the Italian Kingdom.   But perhaps the  gentleman holding the billiard cue, second from the right in this picture, was one of the Austrian Army who occupied the city after the battle of Caporetto in 1917.....  The distinctly Austrian looking Eagle on the wall behind him is actually the symbol of Friuli. 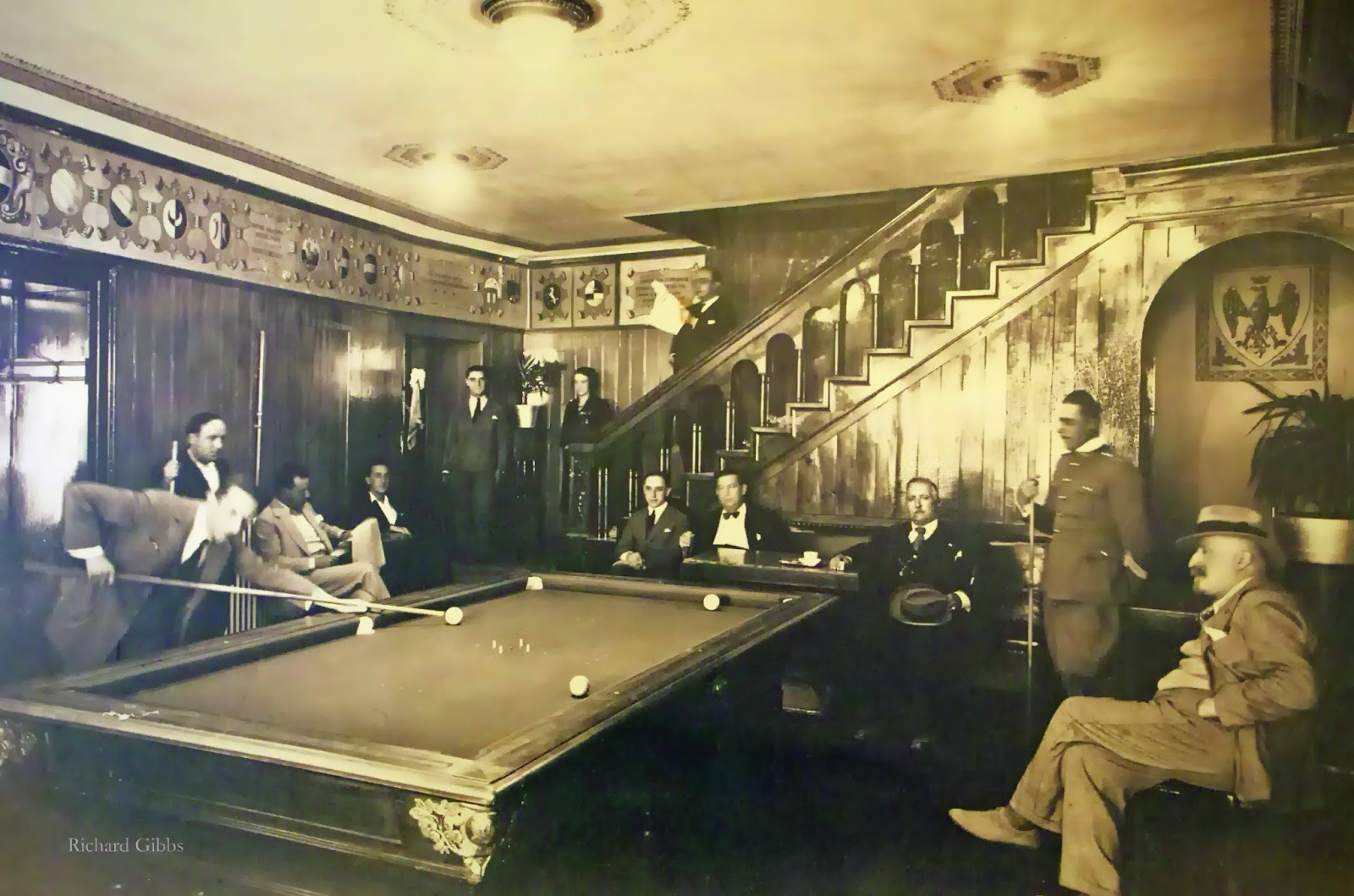 Today Cividale is a quiet, small town.  Its history lies there to be discovered, with a display of treasures from the Lombard Necropolis (on the hill behind the great new supermarket, itself just up from the brand new railway station) in the National Museum of Archaeology, which is housed in the Palace of the Provveditori Veneti.  It is not surprising that it doesn't feel quite comfortable in the relatively young Italian State, especially given the difficulties with the modern Italian economy, and the visitor is reminded of this by bilingual signs in the streets which explain where we are in both Italian and Friulano, a language which has approximately half a million speakers. 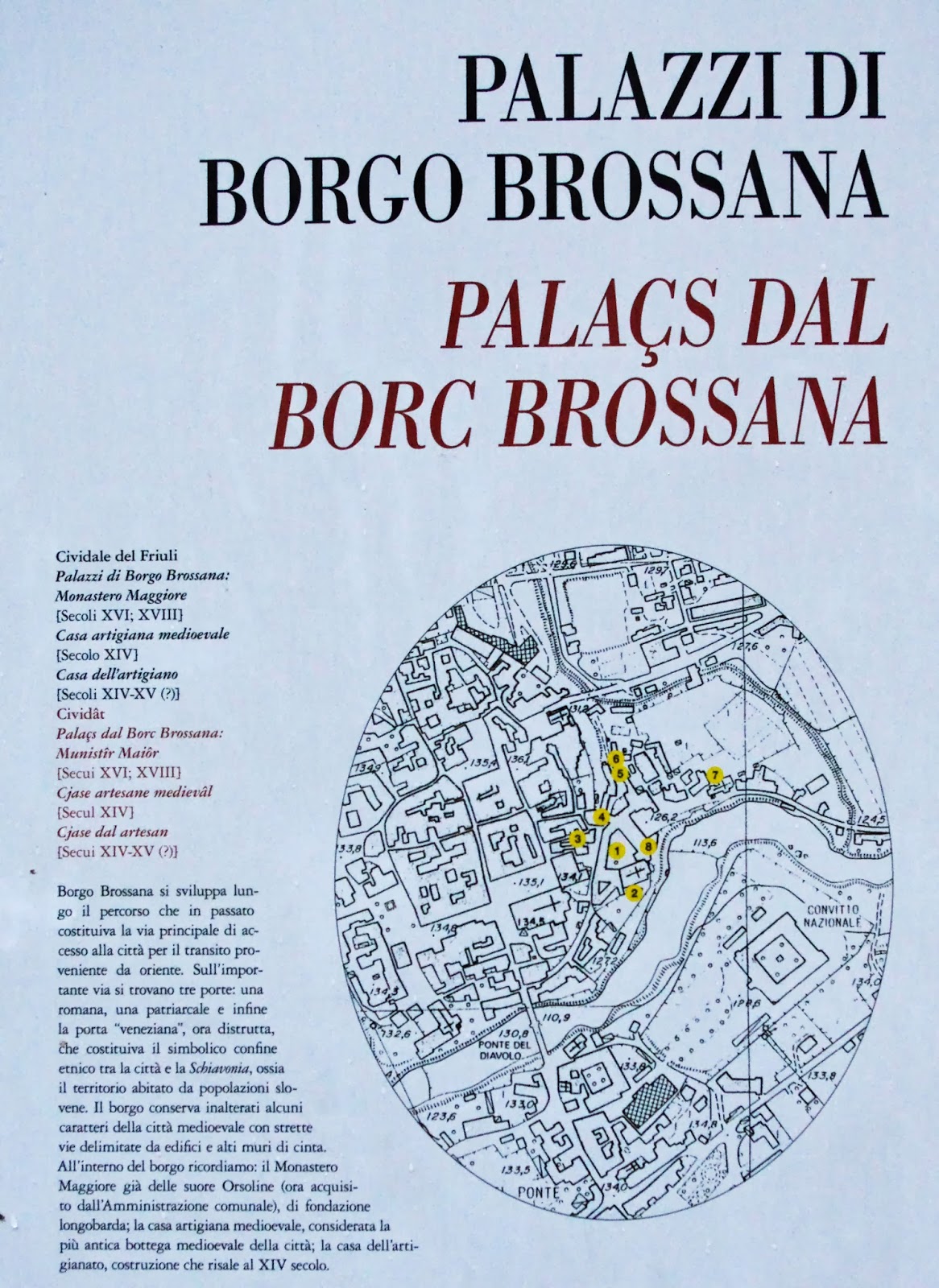 But the town harbours quaintness and oldness and a quirky individuality.  Medieval buildings seem a normal part of the fabric: 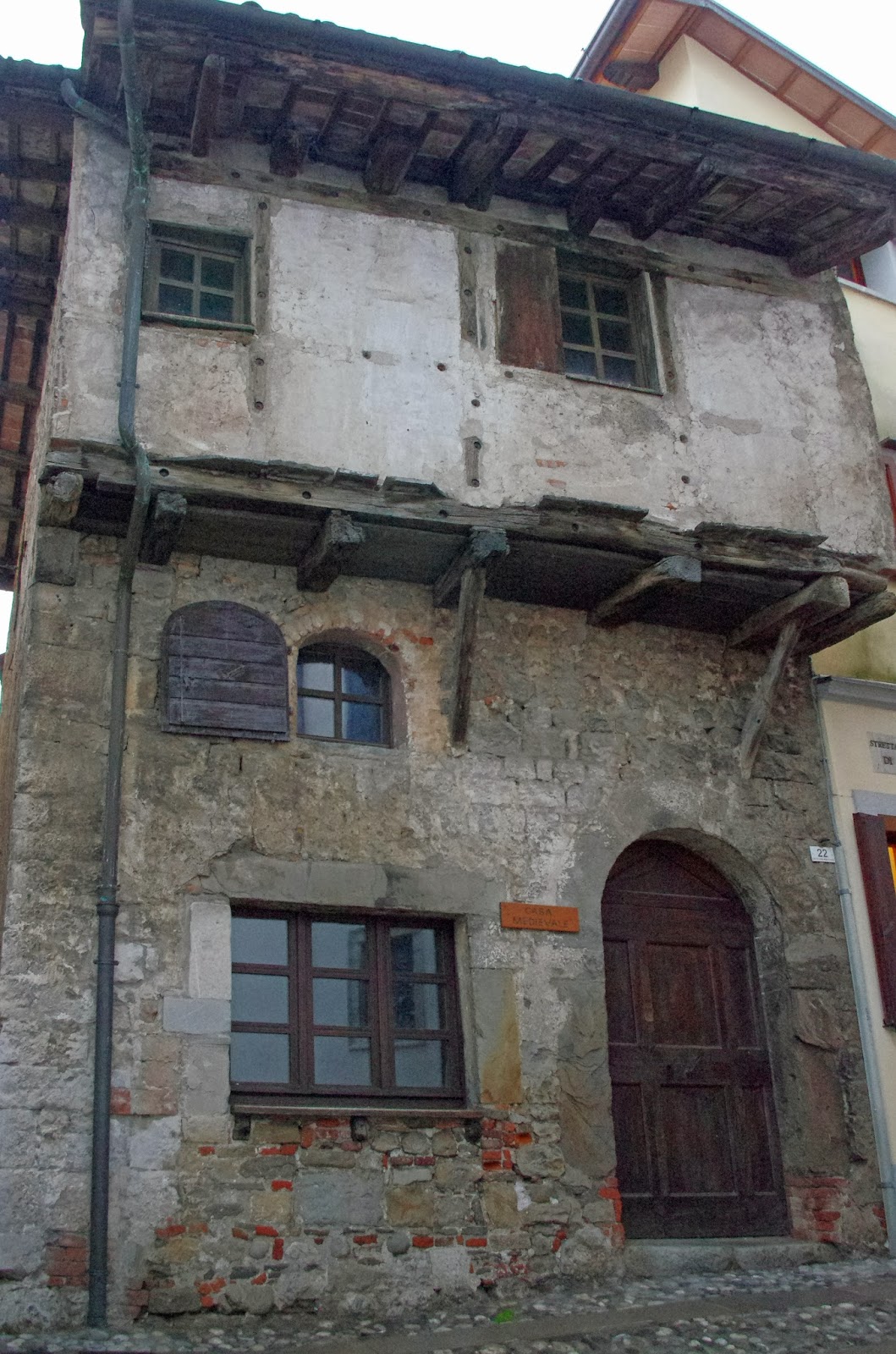 Both in the tortuous back streets or arising above the Devil's Bridge by the River Natisone. 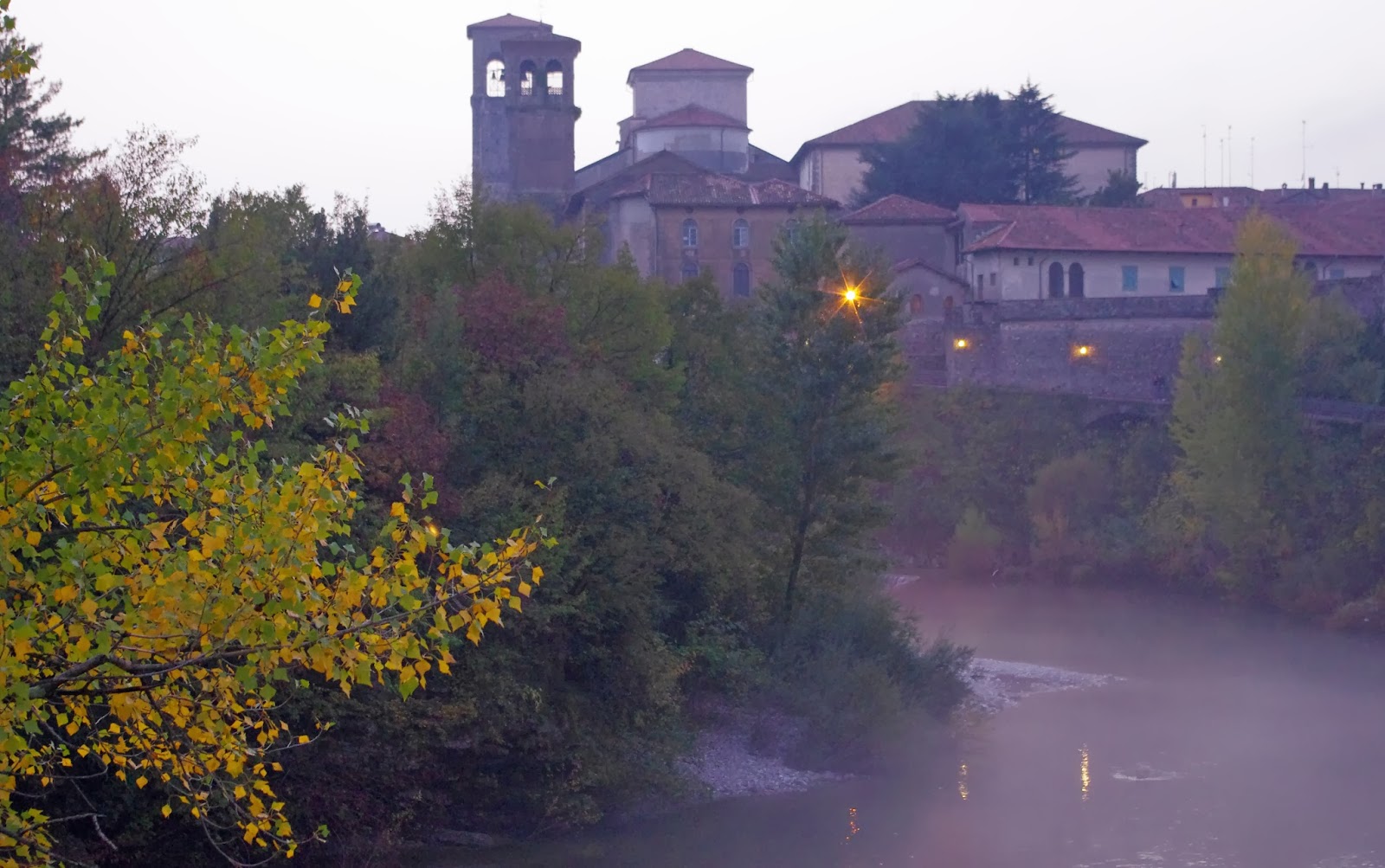 In the brighter main streets, shops sport their independence, with pride in their business: And in their quirky sense of colour and appeal. 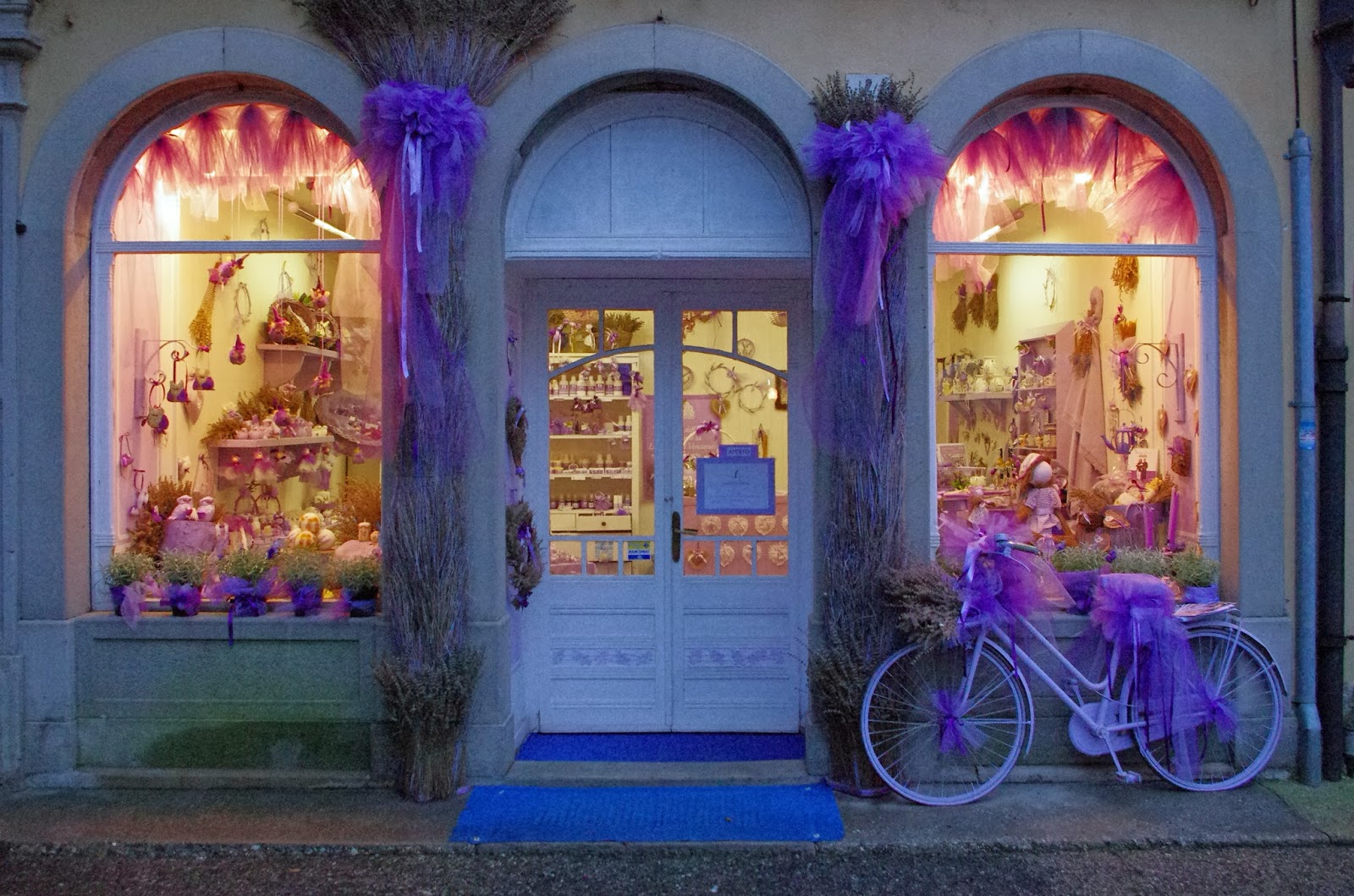 There are almost no chain stores here -unlike small town England, the majority of shops are independent.  There are banks, of course, and a couple of supermarkets, but the streets are filled with clothing boutiques, artisan butchers and bakers, cafes and wine bars.

These last predominate.  Without being showy, they appear as you pass by, tempting you to retrace a step or two, to pry in, to accept the cheer of a glass of ribolla gialla, or verduzzo friulano, a schioppetino or a picolit.  There are 2,300 hectares of vineyards in the DOC zone of the Colli Orientali del Friuli, and Cividale is the capital.  Some of these osterie are also restaurants, where you can stop at a single glass or pass the whole evening.  In the Antica Trattoria Dominissini I take a glass of merlot for €1.50 and am given a delicious piece of bread and lard to go with it; the chalk board says: Oggi Tagliolini con Funghi Porcini - very tempting.  The bar Tipico bills itself as a Vineria - Stuzzicheria  and I take a glass of refosco for €1 with a tiny cheese and rocket sandwich included.

In gustobase, which is an enoteca con cucina, Enrico tells us how business is slow, and how these days it is not enough to own property and let it out.  He was a diving instructor in the Maldives, but has returned to his home town to run this business.  Times are slow, and quite difficult, however, and on this dull Monday evening we are his only customers for a while.  He is enthusiastic, and he sings the praises of the wines of Damijan Podversic, whose Bianco Kaplja is a revelation.  This is 40% chardonnay, 30% friulano and 30% malvasia istriana.  Damijan makes it like a red wine, with the skins in the must in oak casks for two to three months.  It is then aged in barrels for two years and then allowed to stand in the bottle for six months.  A light sediment may cloud the wine a little, but it is genuinely beautiful.﻿ 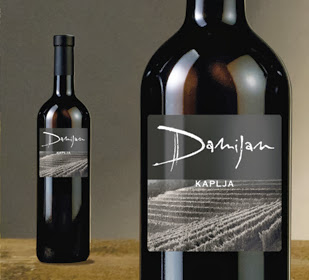 Perhaps with a sense of penitence, we drift to the Cathedral, an austere fifteenth century building with a baroque bell tower. 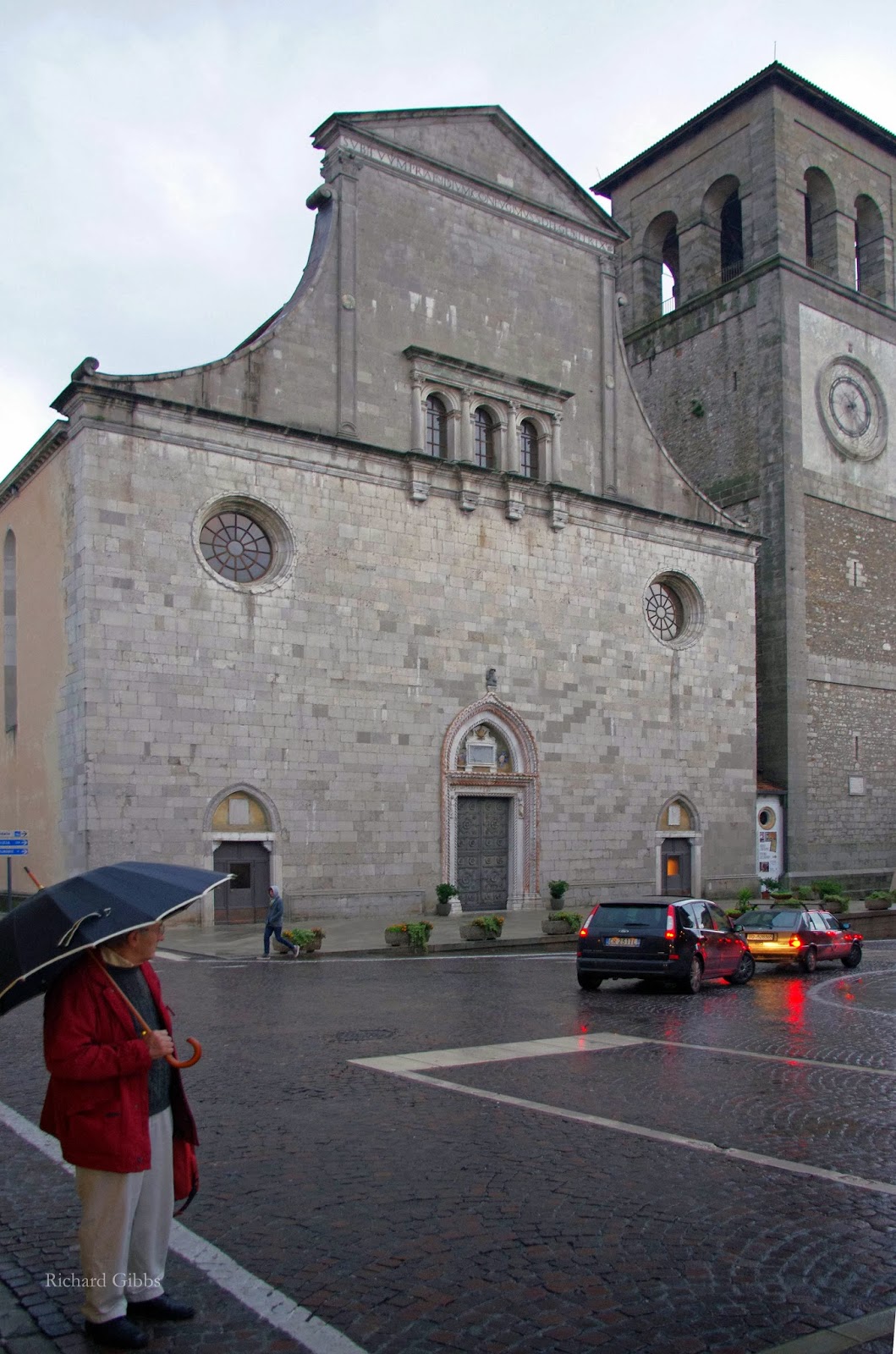 Inside the Madonna looks after her child, her eyes half shut under the weight of the ornate headdress and crown she wears.  She is perhaps tired.  The fuss over her little one too much, though he looks well and feisty with his curly brown hair. 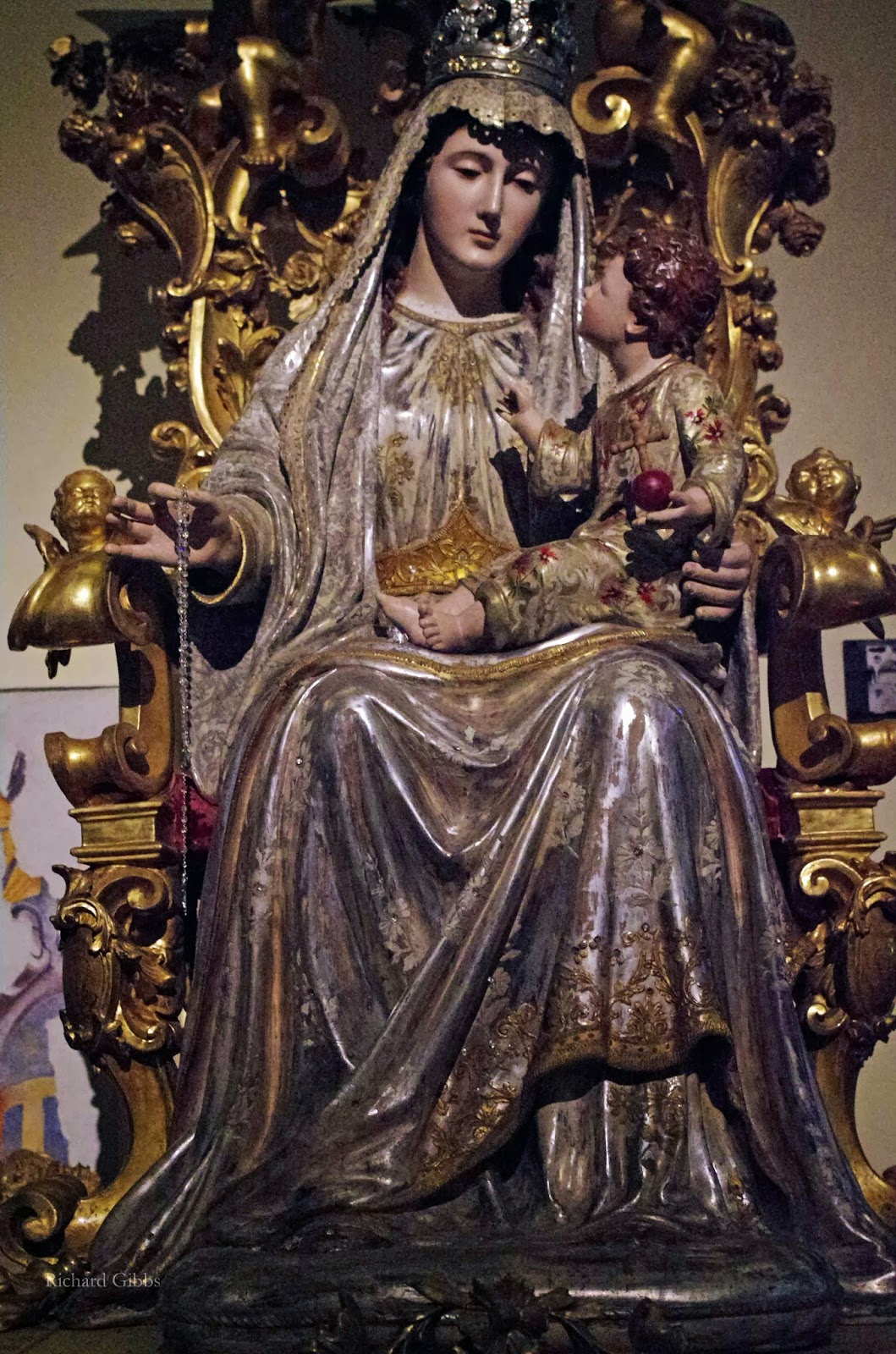 On the wall hangs a crucifix, again elaborately crowned, the twisted figure seeming surprisingly fragile against the enormity of the cross.  His vulnerability contrasts with his dependence in the other piece.  The story unfolds, again and again, and in this great space we are reminded. 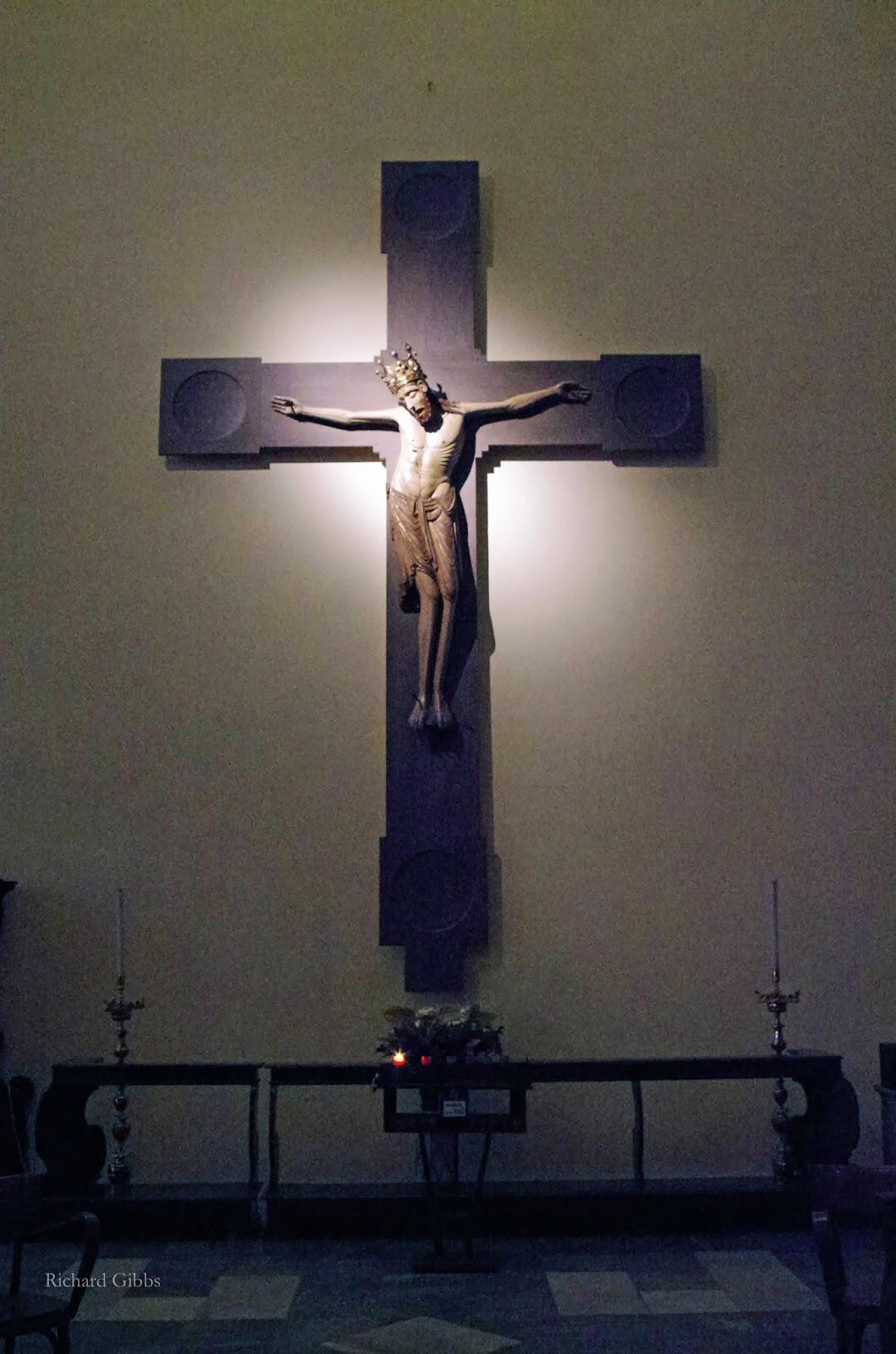 Outside it is now dark and a cough echoes in a cobbled street.  From a bar I hear the strains of Ligabue singing Sogni di Rock and Roll, played as a tribute to Lou Reed.  Here it is as though history has accumulated and slowed down.  Almost crashed.   Paolo Diacono stands on his plinth near the Café Longobardo, with no more to do.  The stories have come full circle.  The people go about their business, appreciating life and the fruits of the seasons.

We finish the evening, in the Ristorante al Monastero, with Cjalcions del monastero, hand made pasta parcels stuffed with ricotta and spinach, but sprinkled with pine nuts and sultanas. We take it slowly.  Oh, and we take a glass of refosco......

In the morning we breakfast in the bar in the Town Hall.  The lone figure of Julius Caesar stands before us, as if waiting for a bus.....  I ask the quickest way to the station, but he shakes his head.  "Don't ask me," he says sadly.  "I'm a stranger here myself....." 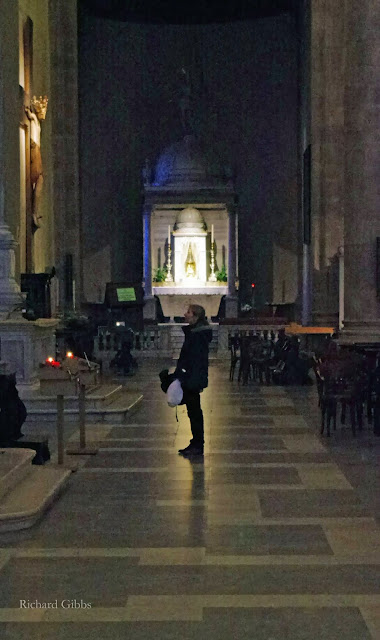