A full grown human being may contain a gallon of blood. A full blown bull will contain six.  Gallons.  If my hired Lancia ran on blood I could do three hundred miles on that.﻿
﻿
The small (5,000 souls) town of would not exist if it had not been for pyroclastic flows of red tuff with black scoriae from the volcano of Vico a couple of hundred thousand years ago.  Since then, two streams, the Promonte and the Rotoli, have worn their ways through the rock to create, on the one part, the defendable promontory which supports the town, and on the other the route of the Imperial Via Cassia (here a part of the Via Francigena, the pilgrim way from Canterbury to Rome) and an Etruscan necropolis and ancient amphitheatre. 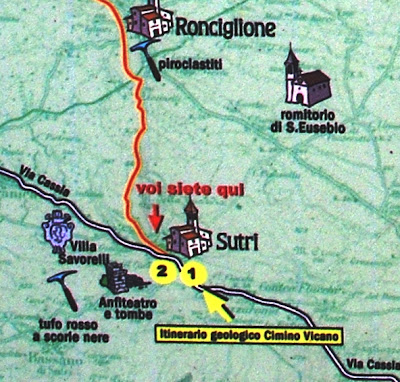 This arena, fifty metres by forty, was carved from the living tuff, an impressive reversal of conventional building technique; and this was done about two thousand years ago. Impressive?  How often have you looked at a rocky hill and thought, "That would make a good amphitheatre if only I excavate about 18,000 cubic metres of volcanic rock?  It would be especially cool if I could do it without computer models or JCBs?"  Trained architects, and Kevin McClouds, do this most of the time.  But two thousand years ago it must have taken some nerve.  Or perhaps a deal of bullish confidence?

And for what?  A mere two days travel south and you could attend all those bread and circus events at the Flavian Amphitheatre (aka the Colosseum); a week or so of exotic animals, pinging up on elevators from the stench below, trampling Christians and other undesirables into the sandy floor to the downward thrust of a hundred thousand thumbs.  Couple that with some unbridled sex in the stews of the Suburra, and then the long hike back to the farm.  Why dig an amphitheatre here? 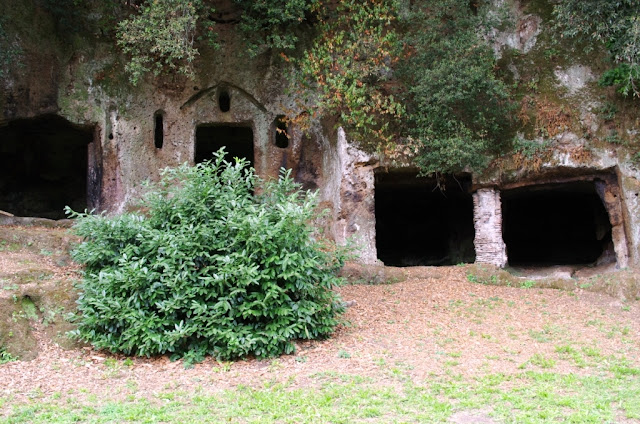 Well, who knows?  Sutri was, for a time, an important place.  One of the principal towns of the Etruscan world, it changed hands several times – even twice on one day, once.  And local authorities like to make their mark, don’t they?  Even two millennia ago there would have been some inflated councillor, past his prime and eager to impose his family name on the community in perpetuity, who might have pushed through the planning permission, brought in a friendly engineer (probably smarting from some other lost contract) and hitched his daughter to the contractor.  Before you could say “Ire Sutrium” the site’s been acquired, excavated, defined, refined and embellished. 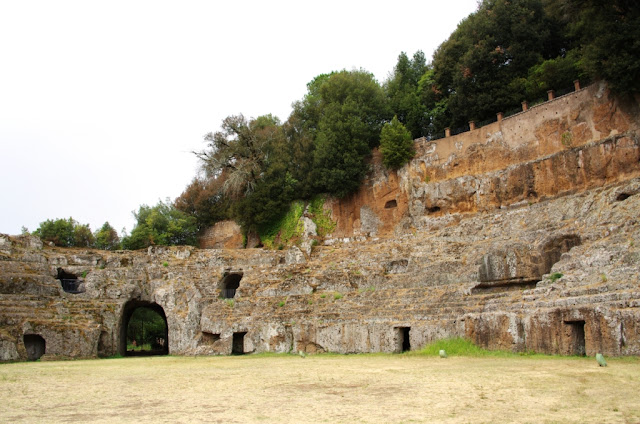 Bring on the bulls……

The Etruscans, ever handy with an adze, had excavated tombs in the adjacent tuff for centuries.  Some became toolsheds, some donkey stables and some garages, though for a while most of them were tombs. 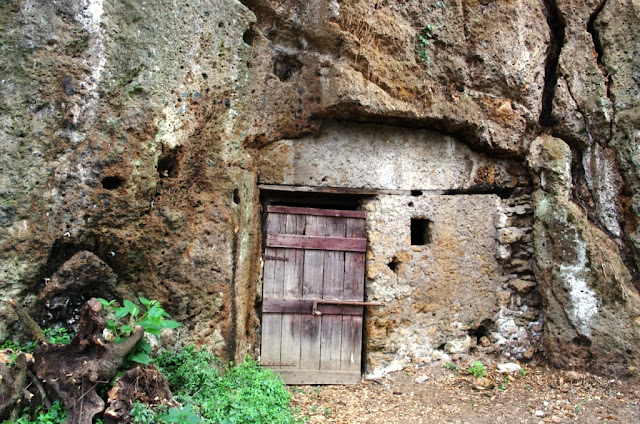 But one became a Mithraeum.  The cult of Mithra, originally a Persian, or Zoroastrian, interest, was picked up by the Greeks and caught on amongst the Roman military.  At one point there were about 700 Mithraea in the area, all associated with tauroctony (the killing of bulls) and wherever possible underground and mysterious. 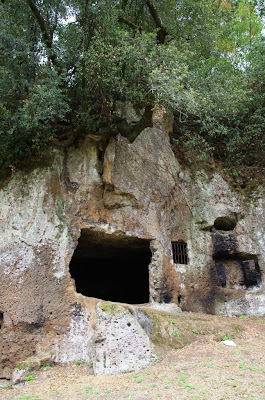 Here, at Sutri, the Mithraeum is in an enlarged and complex Etruscan burial chamber, about a hundred metres from the amphitheatre, under the cliffs crowned with a sacred wood of ilex and arbutus.  The altar sits below a sacrificial chamber, to which the beasts would have been dragged and cajoled, to shuffle off their mortal coils to satisfy the sanguinary thirsts of ignorance and pride. 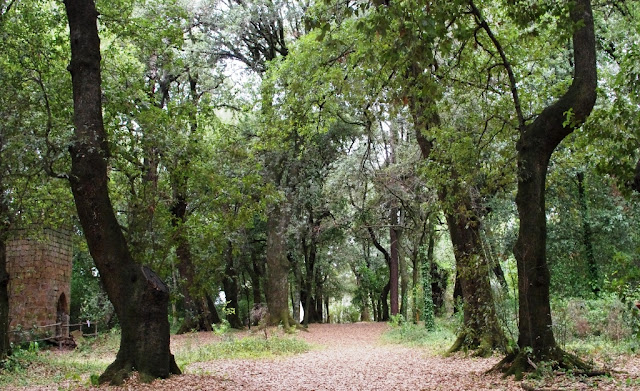 Six gallons.  Thirty litres.  Fresh, warm, bright red, sweetly sickly smelling blood coursing down the specially created channels over the initiates and down the runnel past the benches and the triclinia where the dignitaries awaited their feast.  Thirty litres.  Perhaps a litre for every man within the gloomy entrails of these rocks.

Then, and only when the bleeding stopped, the worthy citizens of Sutri would gorge themselves on beans.