The Heart of – Part II

There are lions in Norcia.  Unusual to find at 604 metres above sea level in the Monti Sibillini, but two magnificent cats benevolently guard the Palazzo Comunale.  They won’t hurt you.

There are wild boar in Norcia too.  But they won’t hurt you either, as most of them have been made into sausages, for which this town is justly famous, and their heads, sometimes sporting raybans, others with cigarettes tucked in by their tusks, are mounted above the doors of food shops .  In fact, long before I made the trek up the Italian aorta to this captivating town, I frequented a Norcineria in , buying delicious salami and ham, without realising that the name denoted the origin of these products.  Later on, my neighbour, Marco, drove up here every day to pick up his van to deliver such delicacies to outlets throughout and Lazio, returning late in the evening, with wax paper packets of strongly flavoured meats for his family and friends.
Norcia is lucky to be alive.  This little place (population less than 5,000) has suffered many heart attacks in its long long history, with one in 1859 so violent that a law was then passed that no building may be taller than 12.5 metres, or a maximum of three storeys.  In 1979 it was quaked again so hard that when we first visited ten years after that many buildings were still in restauro, though actually the fourteenth century walls and some palaces are so solid that it will take more than a mere terremoto to damage them.  Indeed, we used to stay in the Hotel Grotta Azzurra (home of the excellent Granaro del Monte restaurant) which had walls so thick our radio baby alarm would only work just outside the bedroom door, so our plans for a restful, conscience-free dinner downstairs whilst the infant dozed aloft were cut very short indeed. 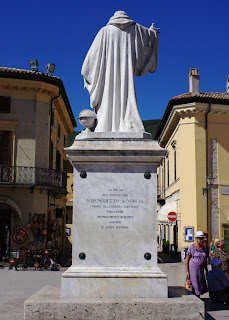 All this aside, there is a more important reason for Norcia to be on the map.  In the year 480 AD it was the birthplace of Saint Benedict and his twin sister Saint Scholastica, and therefore, in truth, Norcia is the birthplace of western monasticism.  His inspiration and his Holy Rule, written at Monte Cassino, where he founded the Abbey in 529, with its insistence on a balance of Work and Prayer, became the key strength of religious orders through the dark ages, through the medieval period, through the renaissance and into the modern era, with a Monastery in his name still functioning over his birthplace, the remains of which can be seen within the church of San Benedetto, which is built on the site of the Roman Basilica.
The area around Norcia, a fertile plain named after Santa Scolastica, is extraordinarily productive, which is why the town is so famous for its food (not only boar and pork products, but also rice, lentils and truffles and cheeses).  The Romans had engineered an irrigation system here, but it lay abandoned for centuries until local monks revived it in the Middle Ages.  The system is known here as Le Marcite, after the Italian word for rotten, as the last crop each year is left to rot to refertilise the ground.  The system utilises spring water at a constant temperature of 10º, which, if kept flowing, will not freeze in winter and so allows for several harvests each year.
﻿

﻿Within a few kilometres of Norcia rise the Monti Sibillini, an area now protected by the status of National Park.  And within the park, is the hill town of Preci, famous for its Scuola Chirurgica Preciana (school of Surgery) which began life in the Benedictine Abbey of San Eutizio nearby, (it was from this school that Durante Scacchi and his brother Francesco travelled to England in 1588 to perform a cataract operation on Queen Elizabeth I).  The Abbey, a stone complex which clings to a wooded hillside, is in good condition and still in use, and our recent visit coincided with a large group of teenagers from staying for their annual retreat. 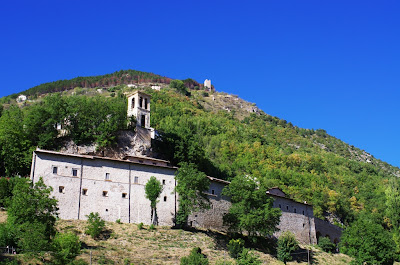 The Abbey was founded by Syrian monks in the fifth century and caves in the cliffs were occupied by hermits in this period.  Later it became a powerful centre and it is closely linked with Saint Benedict and the rise of his order.  At the peak of its influence it ruled over some 100 churches and neighbouring castles, and its scriptorium produced the Confessio Eutiziana in 1095, one of the first religious texts to have been written in the Italian language (the vernacular) rather than Latin. 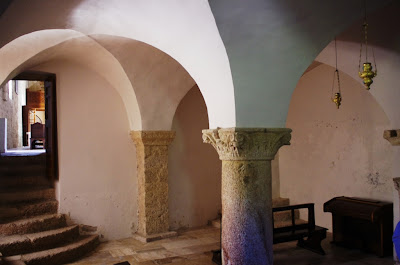 We pause for thought in the crypt of the church, light glowing in from the doorway.  On our way out through a deeply shaded arch an old woman and her handicapped daughter offer us a chance to play lucky dip - to fish for prizes, three goes for one Euro.  The mother talks enthusiastically about the drying herbs in the courtyard outside and how they always come for the summer.  Her daughter chuckles at having visitors to play her game.  We fish for prizes.  And we come away blessed. 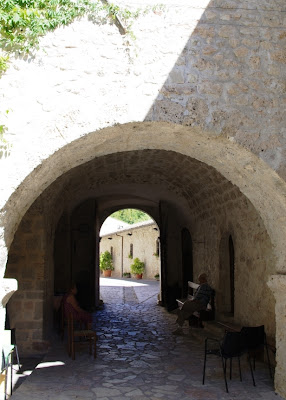