The Heart of – Part III

Sant’Anatolia di Narco is a village of some 600 inhabitants which is situated at 328 metres above sea level about half way up the Valnerina, or the Valley of the River Nera.  Thanks to a post-97 earthquake bypass operation it is also on the route from Spoleto to Norcia, but that’s another story.  The origins of the village go back to the 8th century BC, but most of what you see today is medieval or later.  Saint Anatolia was a young Roman lady executed for her Christian beliefs in the year 253.

The name Narco, but the way, has nothing to do with narcotics.  It may derive from a French family who once dominated the area, or from a corruption of the river’s name, or from the ancient people the Sabini Naharci.  It is not Saint Anatolia of the Narcotics.


The museum, proper name Museo della Canapa ( ), is housed in the former Town Hall, tucked into the medieval core of the village next to the .  It is one branch of the Valnerina Ecomuseum and tells the story of the production and uses of hemp, principally in textiles and ropes.  The name Canapine which features in some villages in the region and which is applied also to the banks of the River Nera, means “hemp lands” and is testimony to the importance given to the cultivation of this plant and its uses in the past.  In a series of rooms, you can follow the story of this valuable plant, from retting, through braking, to carding, spinning, warping and weaving.  At the end of your visit you see an eighteenth century loom which produced household fabrics for the Santucci family until the 1950s.  It is both fascinating and beautifully presented. 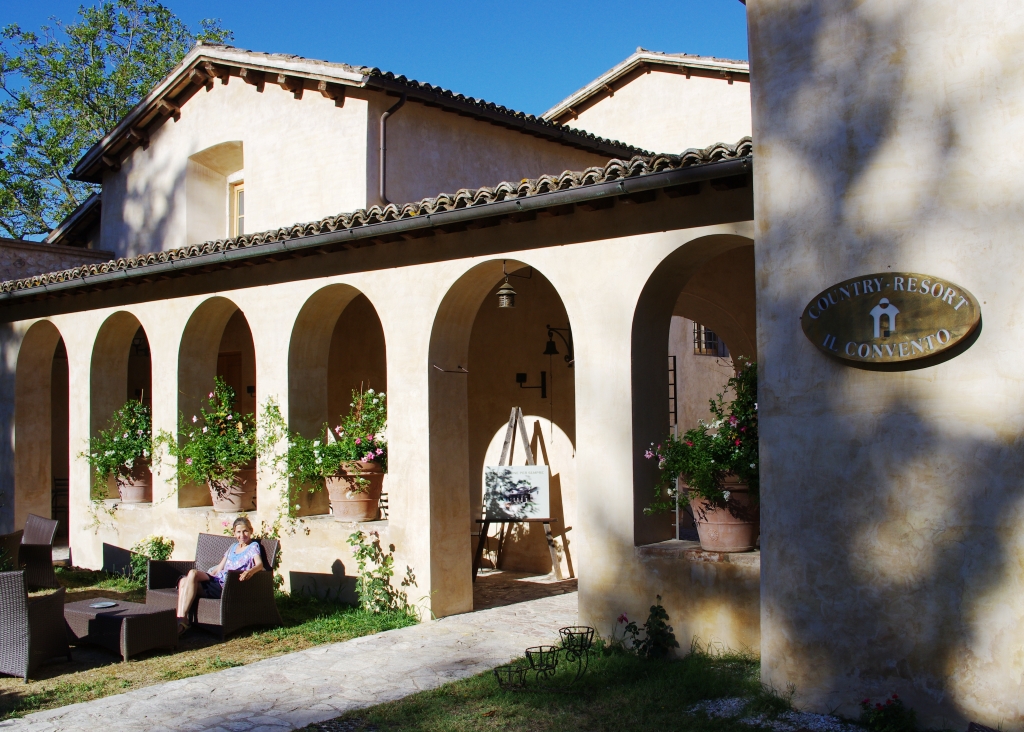 We stay in the ex-convent of Santa Croce (www.conventodisantacroce.com) which was once the home of Franciscan Friars and was built in the thirteenth century, just outside the town walls.  It is a peaceful and very comfortable place, with excellent food and very friendly service.  The walls and ceilings display remnants of religious frescoes, and it is said that the vivid colours and creative designs may have been inspired by a particular plant that grew in the monastery garden; a plant which is now remembered in the nearby museum. 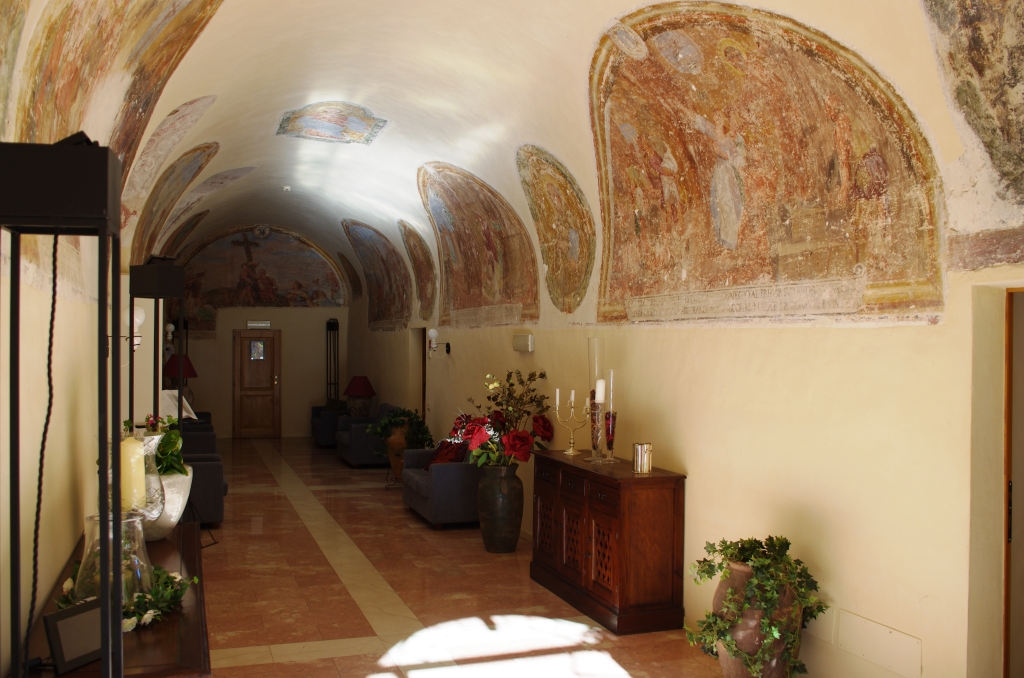 I don’t believe it!

The Valnerina, one of the most beautiful valleys in the heart of , is peppered with villages, castles and religious houses, from Oratories, such as that of delle Grazie at Sant’Anatolia, to the gracious independence of the Abbey of San Pietro in Valle.  On the way you pass, or stop to dine in, the , which clings to the left bank of the Nera and steeply rises from it in winding, stepped alleys.  The Osteria Baciafemmine (www.osteriabaciafemmine.it) which occupies a connected series of stables and cellars, is well worth stopping for, but if it is a combination of the de luxe and spiritual isolation you seek you must make a detour to l’Abbazia di San Pietro.

When I first saw this place it was in a sad state of disrepair; although the church was clad in scaffolding, the place was deserted and closed up.  Nevertheless I was struck by its harmonious structure and by the stunning setting, surrounded by wooded hillsides but with a view down the valley into a shining distance of interwoven blue and gold.

﻿
Now, as well as being able to study the twelfth century frescoes in the nave, particularly those that tell stories from the Old Testament, you can stay in one of the suites that have been immaculately remodelled within the Benedictine Monastery (http://www.sanpietroinvalle.com/index.php).  If you do so, you can take breakfast in the refectory, or in the cloisters.  And without walking more than a few paces through the garden, you dine at the Ristorante Hora Media.  Just like the monks in olden times!  In fact you could bring your colleagues for a weekend of team building, with rafting, caving, climbing and a medieval banquet; or you could come alone for spiritual peace, a sauna and some fire-walking.  This place has it all!


We move on, down the valley, going with the flow of traffic toward .  But there is just time to admire the spectacular Cascata delle Marmore, one of the natural wonders of .  In the unspoilt valley, where trees grow miraculously from the vertical cliffs, and a perpetual stream launches itself into 165 metres of air, spraying the ferns and rocks to create mist and rainbow effects with the delicate music of droplets splitting into spray.

The waterfalls have been Disneyfied!  A vast car park means that you have to queue for tickets to gain admission to the spectacle.  And you have to be there at the right time, because they turn it off in the afternoon and at night to pump the water back up, so that now, instead of a gentle splashing you will hear a siren blast and then a furious roar, as tonnes of water are released to crash violently to the valley floor, smashing their atoms as they hit the three rocky levels on the way down.

OK, so it never was natural….. it was actually the engineering brainchild of a roman consul in the third century BC and it has been reworked several times in the fifteenth and eighteenth centuries before now.

But when we passed by some twenty years ago, it really did seem an awful lot more natural!  Now, to return to the metaphor of the heart, a pacemaker has been fitted, the arteries have been cleaned out, the valves repaired, and the beating heart of Italy is (almost) as good as new.

Ah well!  Change is not always for the worse!