You don't know what you've got 'til it's gone! 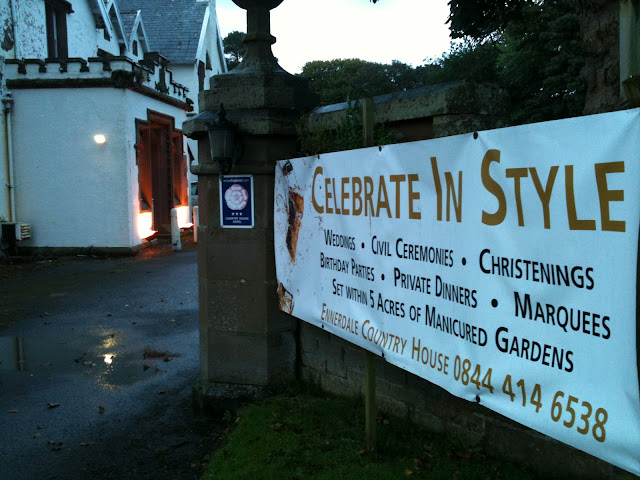 It is night.  I can hear rain blowing against glass, smattering my sleeplessness.  I was dreaming of Field Marshal Montgomery in a white beret, his smile damaged by a long cigarette holder.  The rain dribbled down his face, rusting it red and slowly it washed away to course down a rough street, past darkly decaying houses and over sandalled feet as legionnaires marched.  I heard the bleating of sheep and the rattling of chains and reached for the light.  Very little happened, though slowly a dim glow began to illuminate a flocked wall. 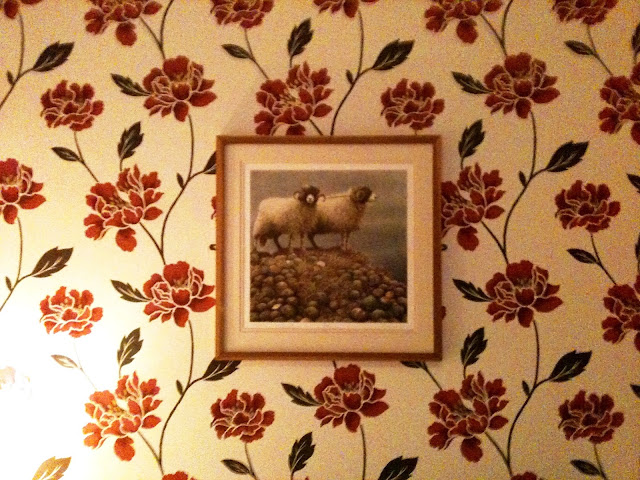 I turn on more lights and slowly dawn breaks.  I am not Terry Waite.  I know I am in Room 6.  Room 6 is bigger than Room 5, where the desk and chair were separated by a large and immovable bed.  Room six even has a trouser press.  But Room six has the same picture over the bed as Room 5 did.  A picture of two sheep chained by the horns.  One looks at me, as if I am in the wrong place.  The other looks out the window, as if she is in the wrong place.  In both Room 5 (where I was last night) and Room 6 the sheep have a forlorn look and I sense they do not like the wallpaper, especially when it is reflected in the mirrors. 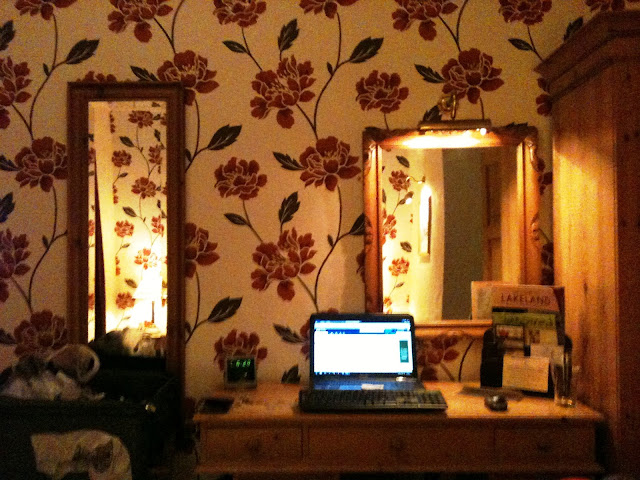 I am here on business, but my business does not start for an hour.  Indeed nothing starts for an hour, so I wander down the empty stairs to the empty breakfast room.  Outside the giant chess set on the lawn has been beaten down and scattered by the storm.  No check.  No mates. 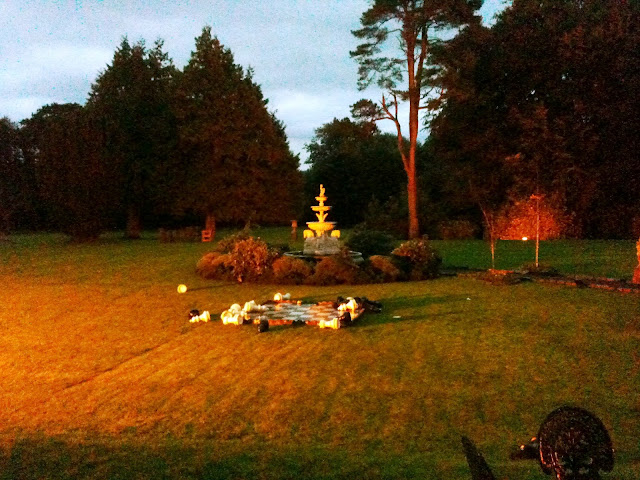 Outside, someone left their pint on the table, in the rain.  It is not tempting.  It was there yesterday. 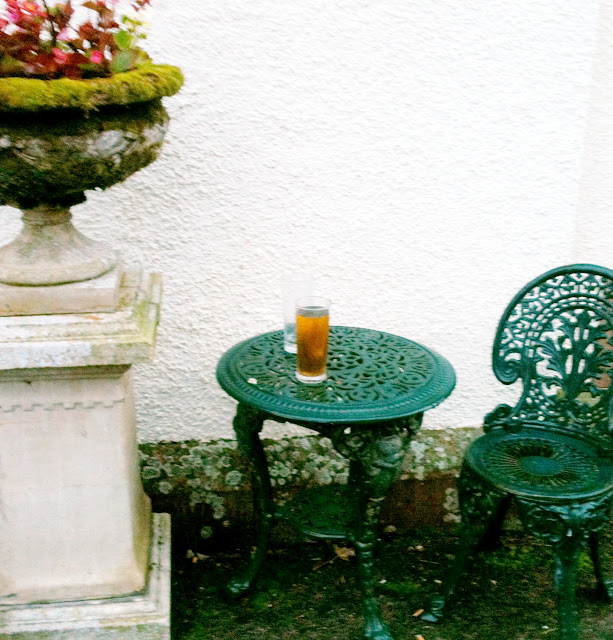 The gardens are better kept than the House, but both tell a story of past wealth and power.  The House was once, according to Bulmer's History & Directory of Cumberland, 1901, "The Flosh, the seat of David Ainsworth, Esq., J.P. and D.L., a handsome mansion of stone. The grounds, three acres in extent, are tastefully laid out, and contain conservatories, orchid houses, vineries, etc. The farm attached, is noted for its breed of prize Leicestershire sheep."  The Ainsworth family made their money from the Flax Mill, which in 1901 employed some 600 people. 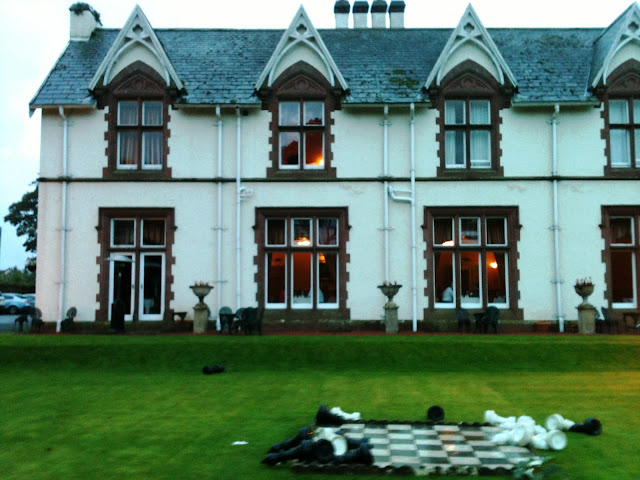 The Flax Mill later became the home of the Kangol company, which was founded in 1938, taking its name from silK, ANGora and woOL.  Montgomery of Alamein became one of their top models, but lesser well known is the white anglo-basque with a satin lining made especially by Mary Tomlinson from nearby Frizington for Bette Davis to wear in one of her films.  You can see, and hear, Mary's story at:
http://www.bbc.co.uk/cumbria/content/articles/2005/06/02/inside_lives_mary_bette_davis_beret.shtml

In 2009, the same year that the River Ehen burst its banks at Cleator, near to the Kangol factory, flooding fields and a number of residential properties (300mm of rain fell in Cumbria on November 19th), the factory was closed and the company, now owned by Sportsworld, moved their manufacturing base to China. 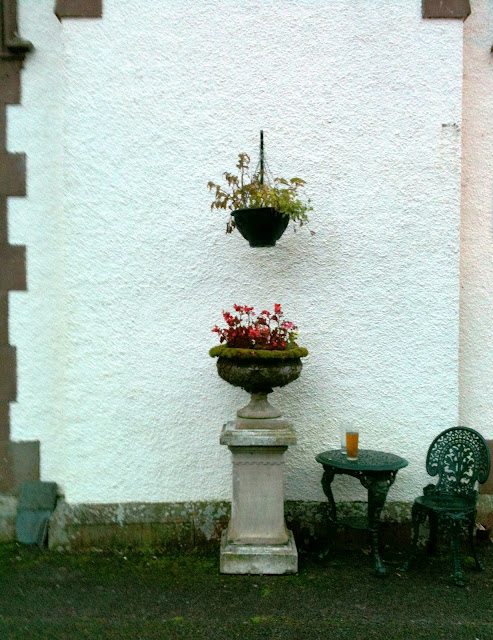 Since the Second World War the house has had mixed fortunes, being at times Council Offices and at times empty and derelict.  Its career in hospitality and catering began when the Truepennies family took it over to make it a B&B in 1981.  It's on Wainwright's Coast to Coast Walk as well as a National Cycle Trail, but this enterprise did not flourish.  In 1990 it became the Ennerdale Country House Hotel and since September 2006 it has been part of the Oxford Hotels and Inns group. 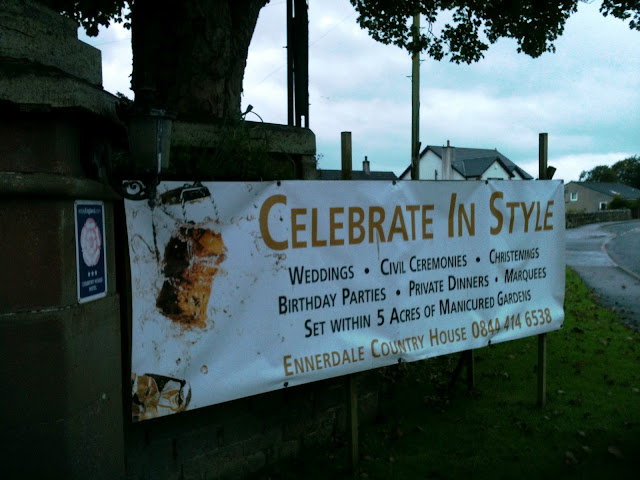 I wander down the Roman road (15 feet wide, and formed of cobbles and freestones) that is now the High Street.

The cottages lining both sides of the street have a particularly Irish look to them, and there may have been a large influx of Irish looking for work when the works of the Whitehaven Hæmatite Iron and Steel Co., Ltd., were opened at Cleator in 1842.  The iron ore of Cleator district is that kind known as red or kidney ore, and is thus described by Mr. Dick in "Iron Ores of Great Britain," Part I: "Compact red hæmatite; easily scratched by a file; lustre earthy; colour, purplish grey; streak, bright red; fracture, uneven; containing cavities lined with crystals of specular iron; and containing, in some cases, quartz."  Other companies opened iron ore (and coal) pits here and the Catholic Church, dedicated to the Sacred Heart of Our Lady, a handsome structure in the decorated style, was erected in 1853 at a cost of £6,000, raised by subscriptions.  In 1901, according to Bulmer, there was even a Benedictine Priory with three monks attached to the church.

As I realise I am late for breakfast, and late for work, my disturbed night, and crazy dreams, begin to make sense.  I hurry back to join my colleagues. 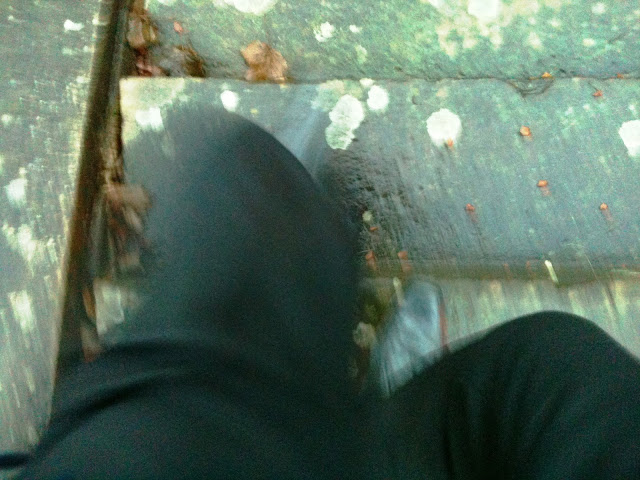 Then, bags packed and clipboards at the ready, we take our leave.  As we cruise down the High Street, without stopping to admire the Grotto, modelled on the Grotto at Lourdes; without time to visit St Leonard's Church, with its 12th century chancel; without the stomach to admire Ehen Hall and its 8 acres of grounds, once the property of Jonas Lindow (who prospered from ownership of the Glebe Pit); and we don't even stop to enjoy Longlands Lake, on the site of the former Longlands iron ore mine, nor nearby Clints Quarry Nature Reserve, a scheduled Site of Special Scientific Interest and of considerable botanical and geological importance.