I am standing in the middle of a major road, the SS3, five hundred metres from the mouth of the tunnel under the Castle at Spoleto.  A set of traffic lights has just turned red and nothing appears to be coming toward me.  I seize the opportunity to walk the concrete ribbon and snatch a photo of the castle from a rare standpoint. 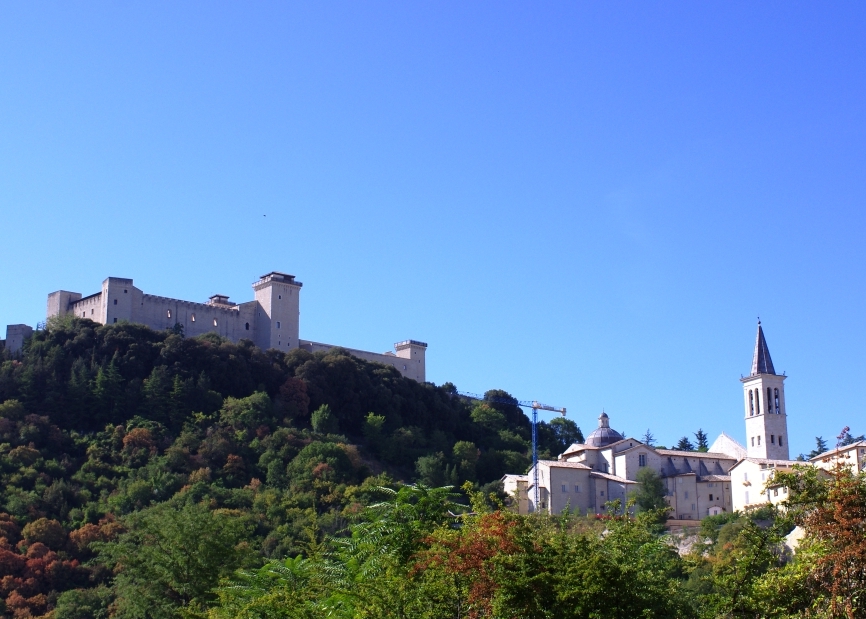 I
t’s not the greatest view, but it is not a conventional one.  The road, a modern carriageway though bearing the name of the ancient Via Flaminia, burrows into the hill above the dry Tessino river bed, shafting straight under the fourteenth century Rocca (castle).

It is eerily quiet.  The light still red, nothing oncoming, I sneak forward to improve the view.   A cowled figure, angular, grey, fleeting, seems to beckon me toward the mouth of the tunnel.  He calls out, but I cannot catch the words in the silence, the idle engines blurring the edges of the call.  I step forward, the road inviting me under the hill, and like a fox I am there, sniffing the dark, padding forward into the gloom.

A scent of sweat and musky blanket precedes me; a stair opens into the rock and the pungency of wool and rope entices me upwards.  The stairs are narrow, dank and slippery, but I can hear the slap of leather sandal on stone above me, and then I am in a cave, a room, a glorious opening, with angels spinning round me in a canopy of blue.  God himself kneels, not for me, of course, but to bless the virgin, his right hand held upright with fingers ranged in benediction,. His left hand gently lowering a golden crown, the very image of his own, onto the virgin’s brow.  His hair and beard, uniformly white but combed and trimmed, connects the jewelled red mitre with the jewelled red coat, his cuffs adorned with gold and precious stones.  His shoulders are kept warm by a green mantle, itself held in place by a golden chain.  The girl is decked in finery beyond the reach of mortal purse, her hands in prayer to beg pardon for her unworthiness.  Gold, pearls, opals, topaz, amethyst – the sheen of silk and lace glittering into the golden sun behind. 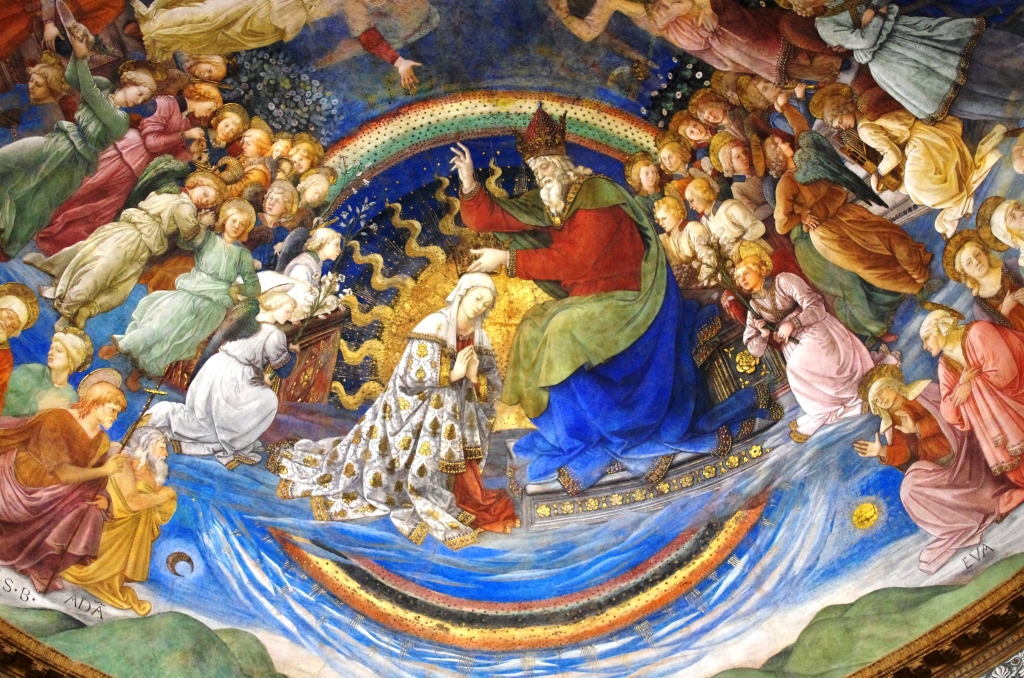 The freshness of the paint overcomes me, but Filippo steadies my arm and leads me up the wooden scaffolds, past guttering wicks, and into an enclosed garden, with a tiled patio.  A golden haired angel in a red robe kneels before a doorway, a white lily in the left hand.  From a cloud above a white haired and bearded figure lasers down a message that strikes through a grille and pierces the shoulder of a delicate girl in red and white who sits demurely with her fingers intertwined in shy confusion.  It is the remarkable announcement of an imminent birth that prefigures ultrasound by two millennia. 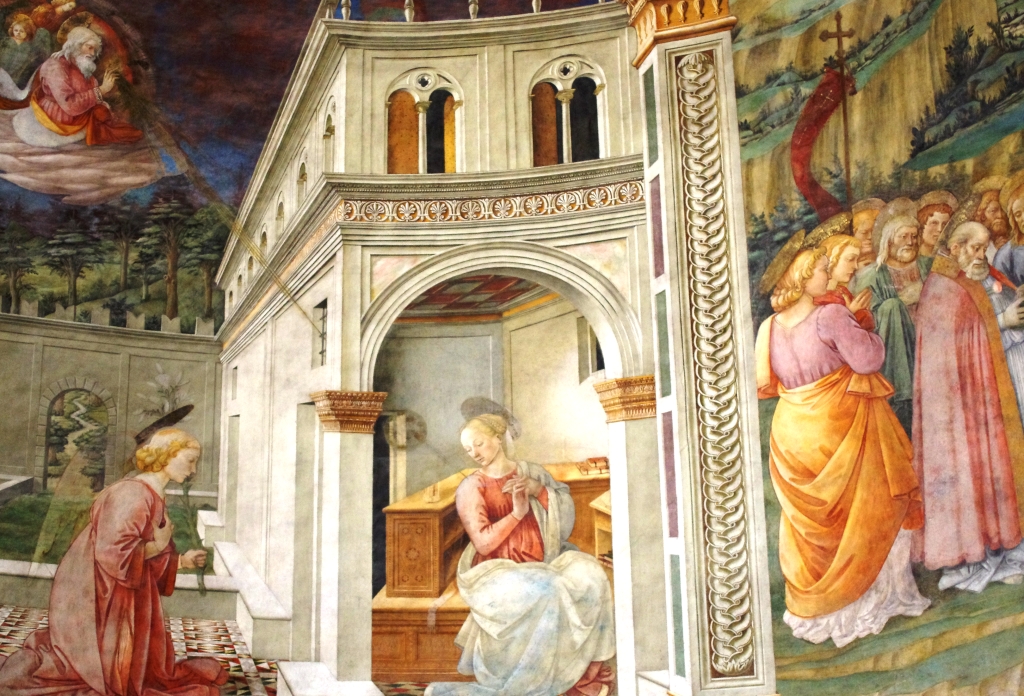 We pass through into the crowd, and move past the priest, the mourners and the praying women; past the ashen faced corpse with her delicate hands clasped above a rich orange coverlet; I pass Filippo himself with his angelic son Filippino then I pass the green hills and rocky mounts, 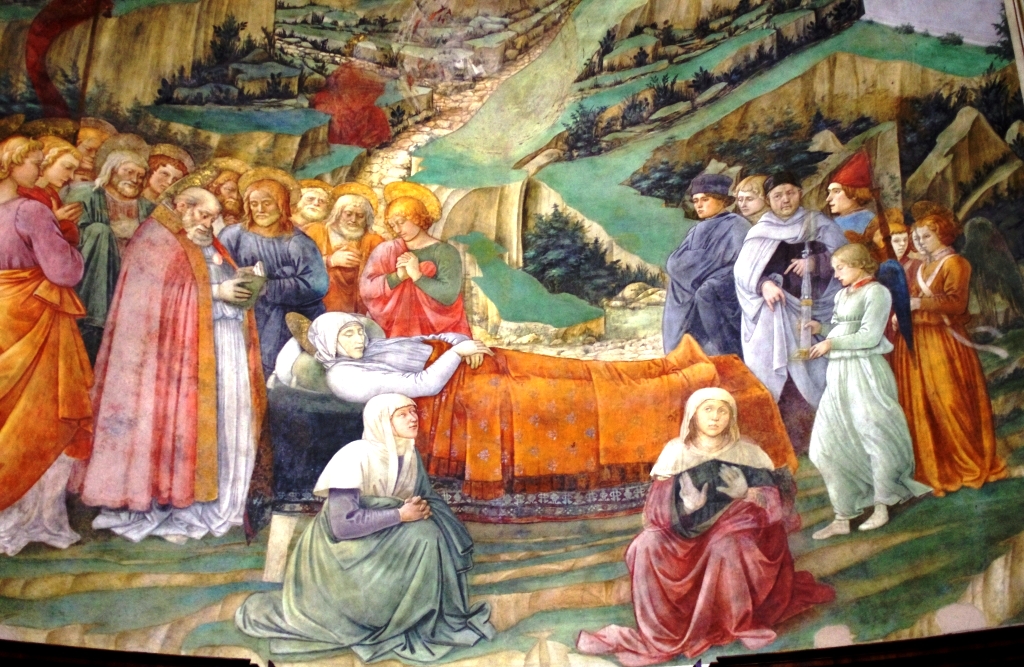 until I stand behind a young woman kneeling before her infant, which lies passively on a cloth on the stony floor, his father humbly musing at his head, a cow and a donkey gently smiling down from behind wicker hurdles. I step gingerly on, past a wooden saddle and through an arch in the crumbling wall.  The path leads back down, into a cave, down the slippery steps and I find myself back in the tunnel, hurrying to my car.

I didn’t notice that the lights had changed.