Still on the run

In the morning, though it is still dark despite the Harvest Moon, I leave Geneva, and the train to Milan skirts Lac Leman and heads for the Simplon Tunnel.  The scenery is spectacular but shrouded in cloud and difficult to photograph with reflections on the windows and shrubbery by the trackside.

At Brig we stop for customs and immigration - and also, the guard announces, temperature checks....  But all that happens is that a burly, desultory man glances at my NHS Covid Pass....  and that's it.

Near Stresa I do get a good view of Lago Maggiore and Isola Bella from my seat (above) and am reminded of the stops we made at the Hotel Bristol, with its horizontal lift, in Stresa, when the girls were small.  My guilt has appeased a little as happy memories begin to take over.

A quick change of train in Milan, and then a couple of hours later I pick up an Audi Q2 in Florence and take aim for Siena, and within an hour or so I am checked into the Albergo Chiusarelli, where we have stayed on a number of occasions.

A little later, showered and changed, I am sipping an aperitif on a balcony overlooking the Piazza del Campo, one of the most beautiful urban spaces in Italy. 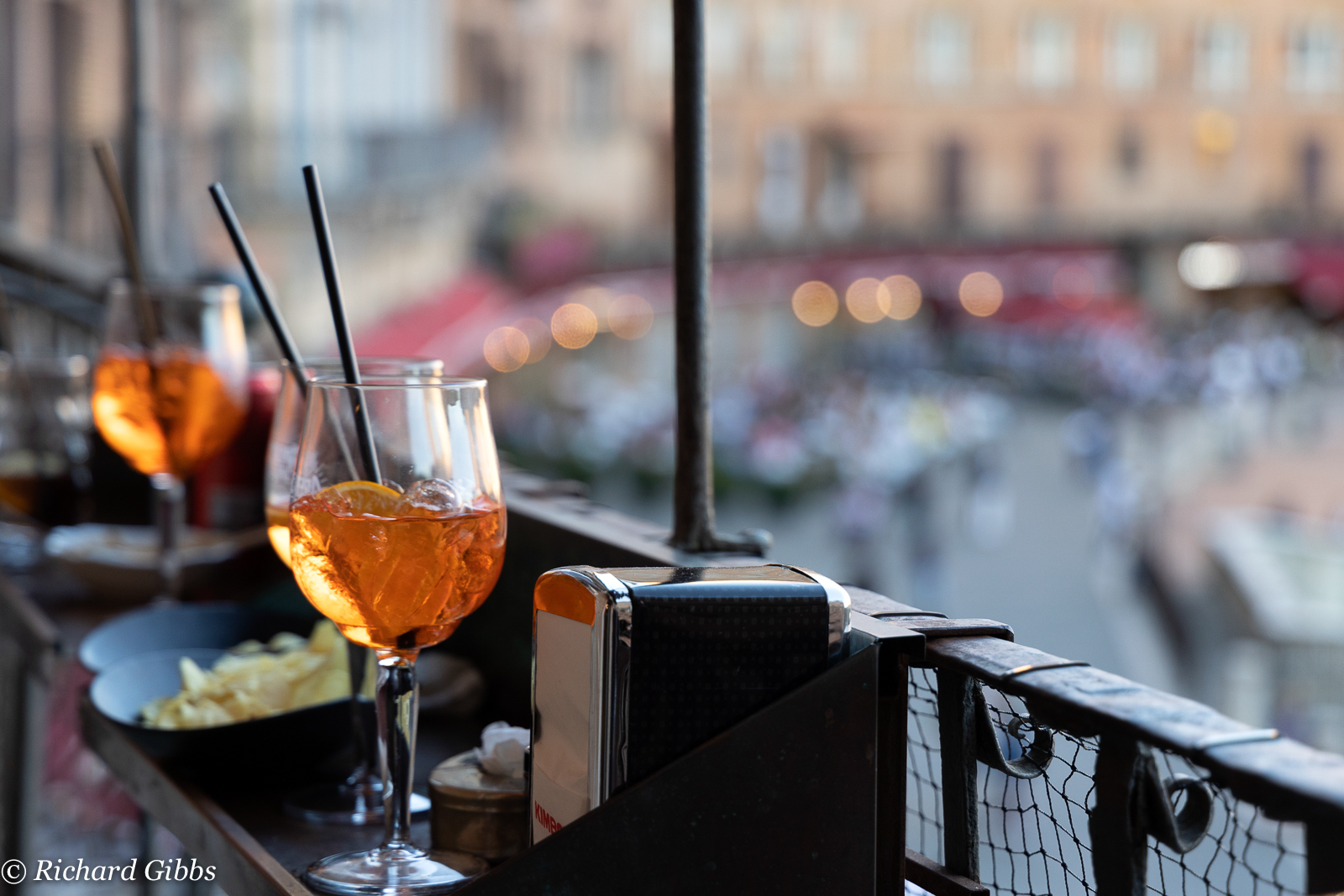 Opposite me, next to the Palazzo Pubblico, I see the little roof terrace from where I watched the Palio, probably in July 1977. 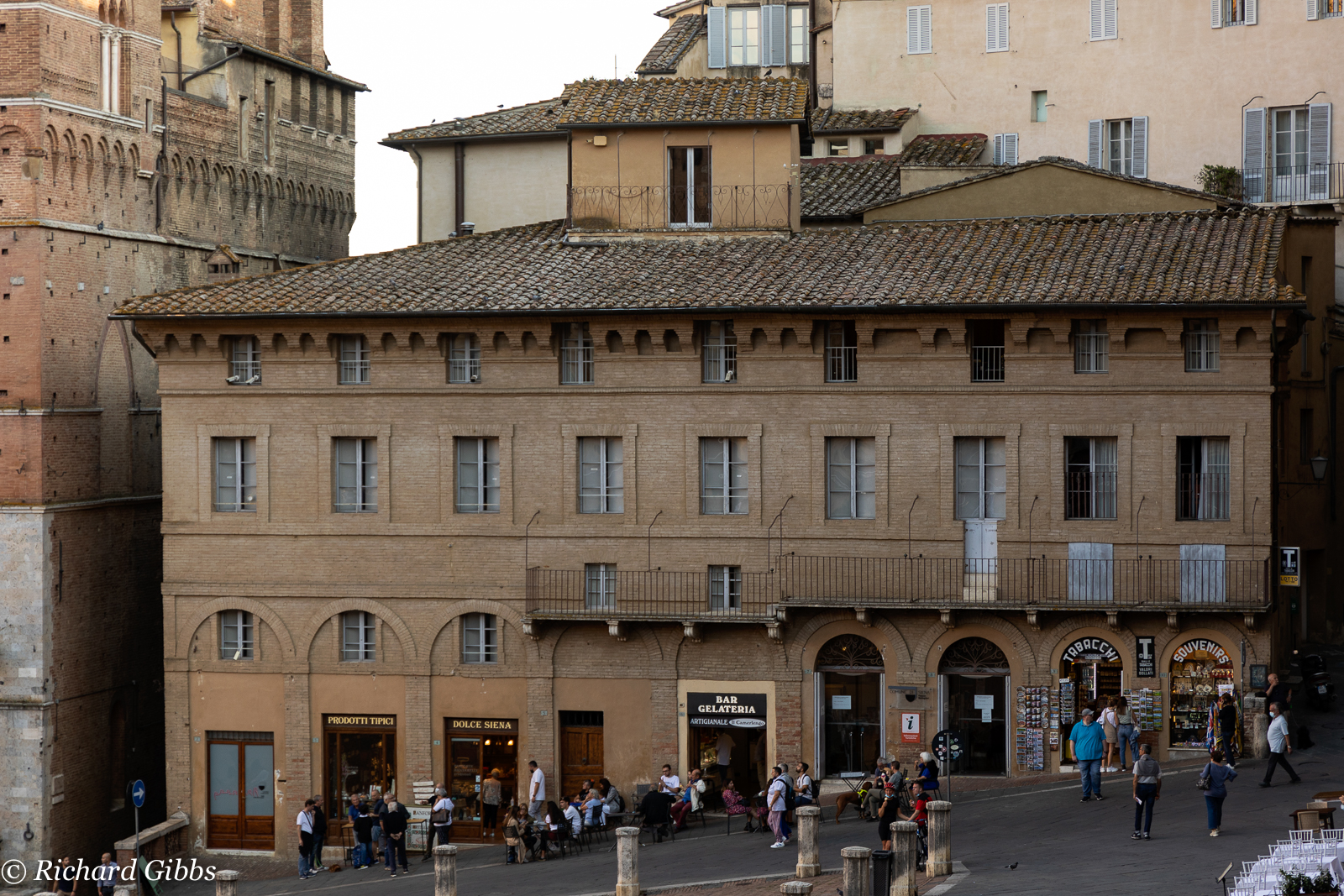 And just on the edge of the sunshine, under the red awning, is the place where I asked Amanda if she would like to get married....(to me... Ed)  which would have been in August 1984. 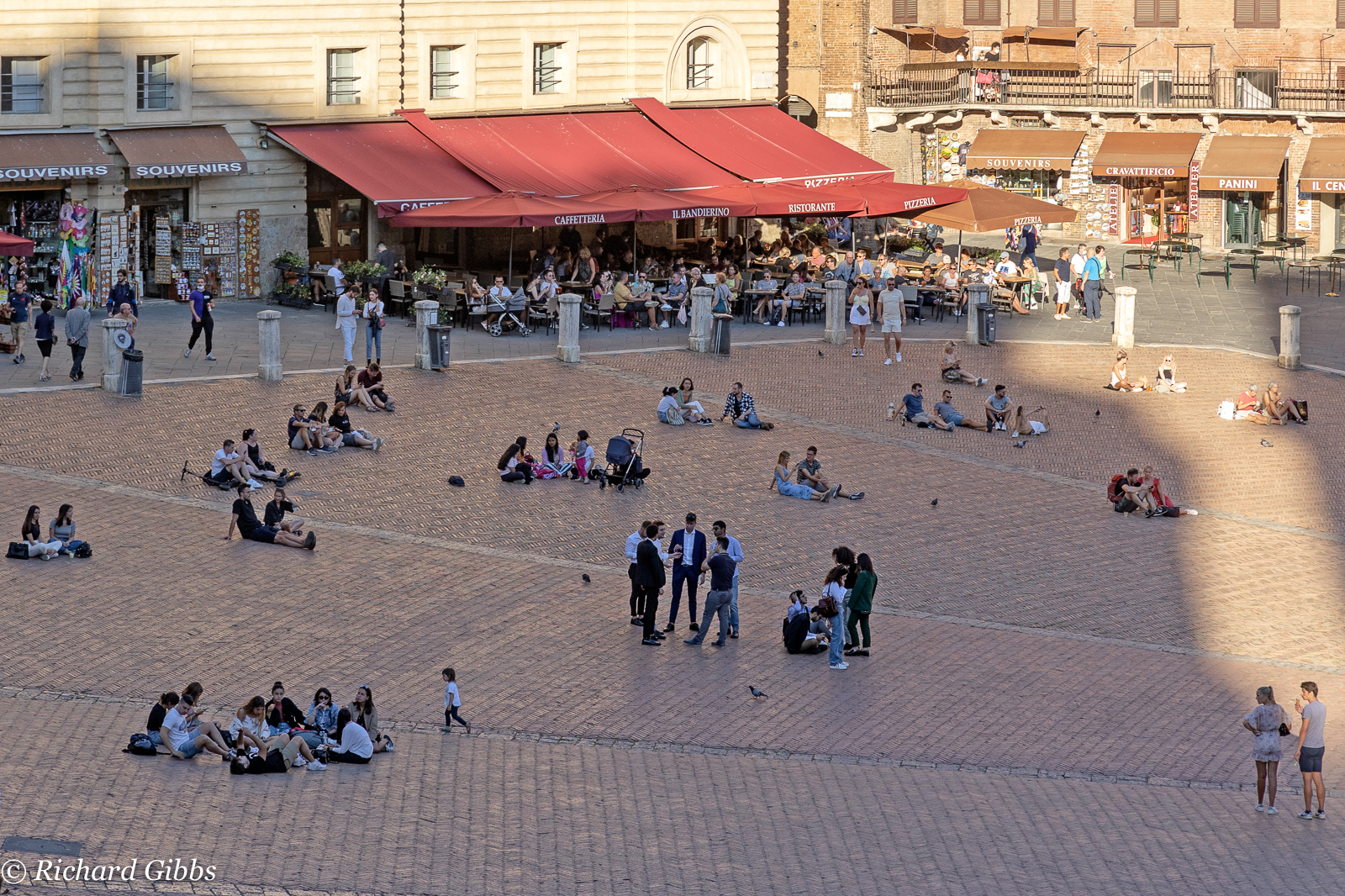 We were previously here two years ago, almost to the day, on the last trip we made to Italy.  It was already difficult to find things for Amanda to eat, and even more difficult to get the timing right, but I eventually found somewhere for her to have mozzarella and soft bread at about six.....
This time I return to the Osteria Da Cice, where we have eaten well many times under the arched ceiling of terracotta bricks.  The hostess has been here thirty years, and here she is showing a table of young men some of the bistecche alla fiorentina that are about to be grilled for them..... 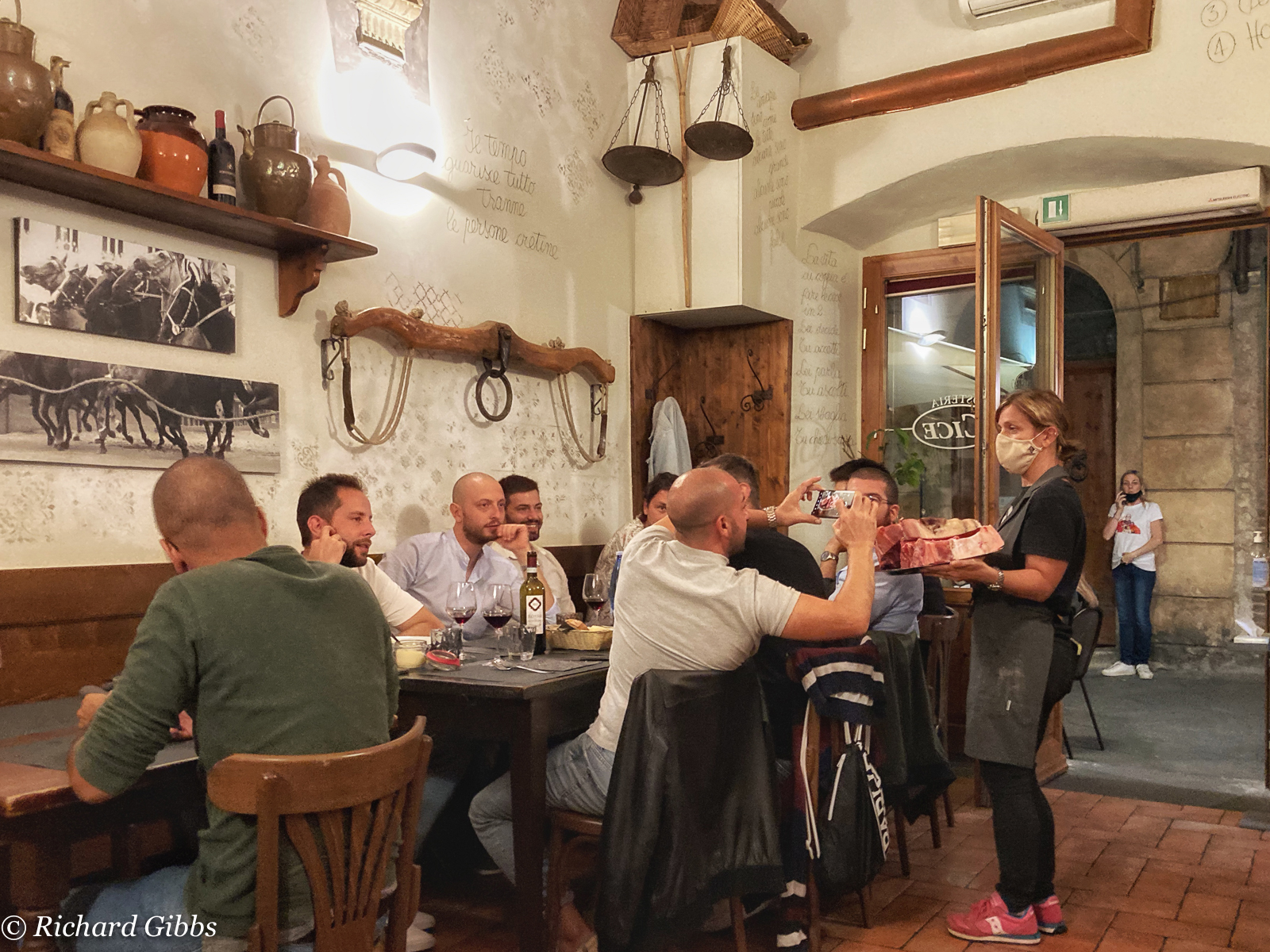 After Cantucci e Vin Santo I wander the quiet streets, and sit for a while gazing at the candy-striped cathedral.  It is like an old friend, and I share something special with it, for it would have been a much grander, more imposing building were it not for the Black Death in 1348, combined with a colossal overspend at the time, which led to the ambitious project being abandoned.  I like it as it is, but this memorial to the plague reminds me of how vulnerable we all are, and how we can never rely on the future. 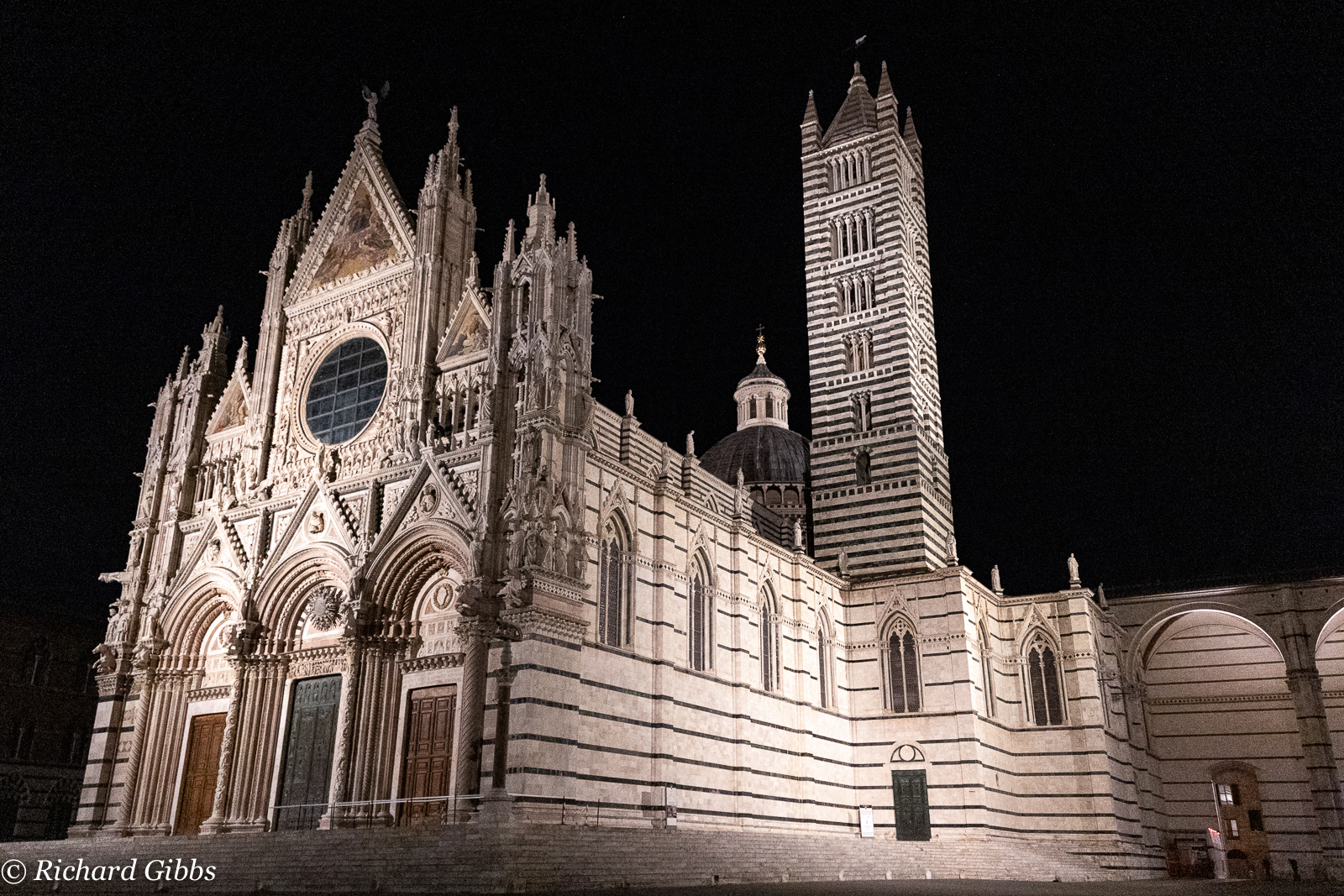 In the morning, in glorious weather, I drive down the Via Cassia and turn off at Buonconvento towards the benedictine Abbazia di Monte Oliveto Maggiore.  I walk down from the car park, past the restaurant in the gatehouse, to the Church and the abbey complex, where, over thirty years ago, Amanda and I stayed in the Foresteria....
The principal reason for visiting this beautiful site is the Grand Cloister, whose walls are adorned with frescos by Luca Signorelli and Il Sodoma (Giovanni Antonio Bazzi - here from 1505 - 8), which tell the story of Saint Benedict.
I particularly like the pictures of various animals which, I think, may have been part of Il Sodoma's menagerie at the time, like these badgers (being pecked at by crows): 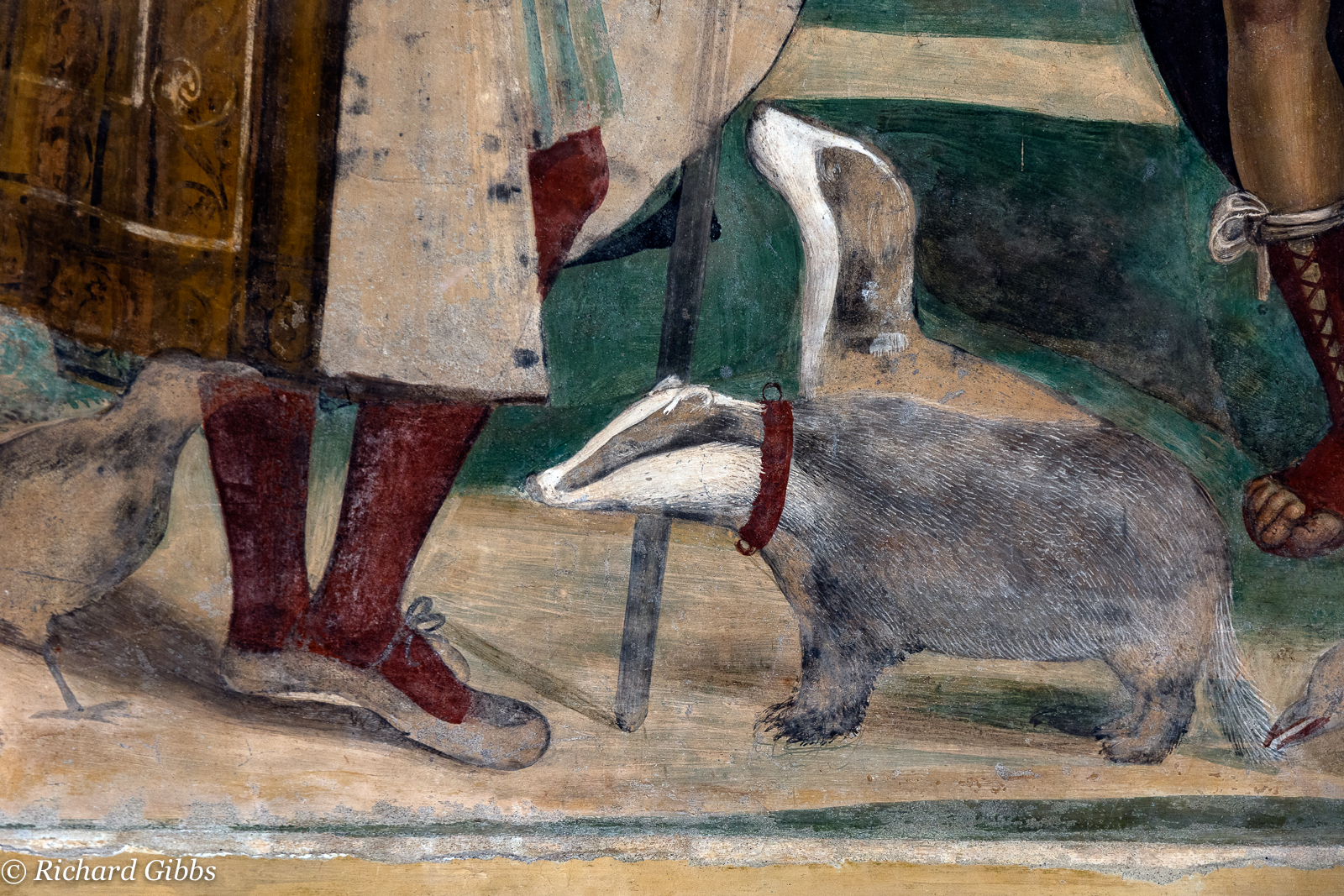 And this delightful white cat: 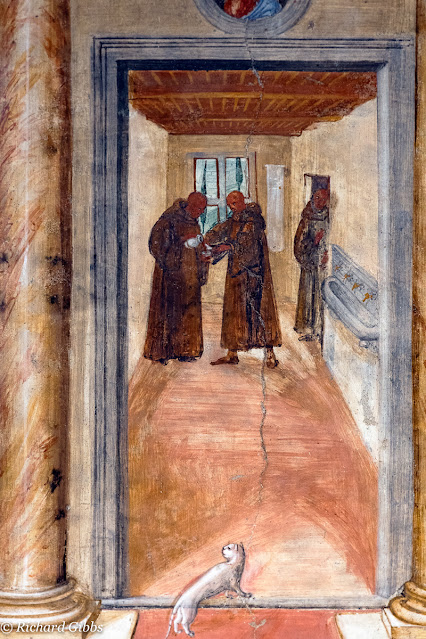 And then there are the male femmine (naughty girls) that Florenzo sends away from the monastery, their innocent (?) faces influenced perhaps by the great Leonardo da Vinci, 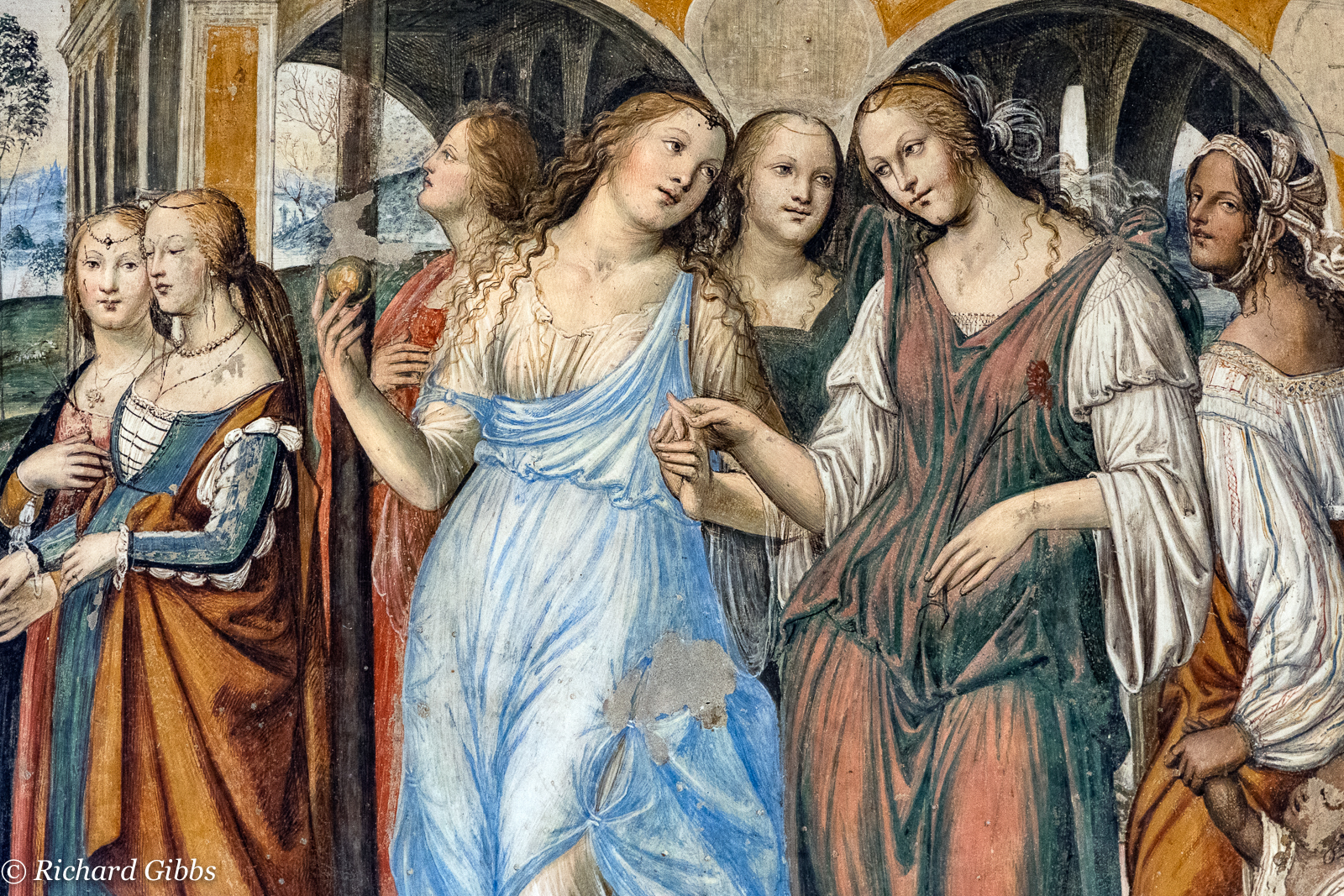 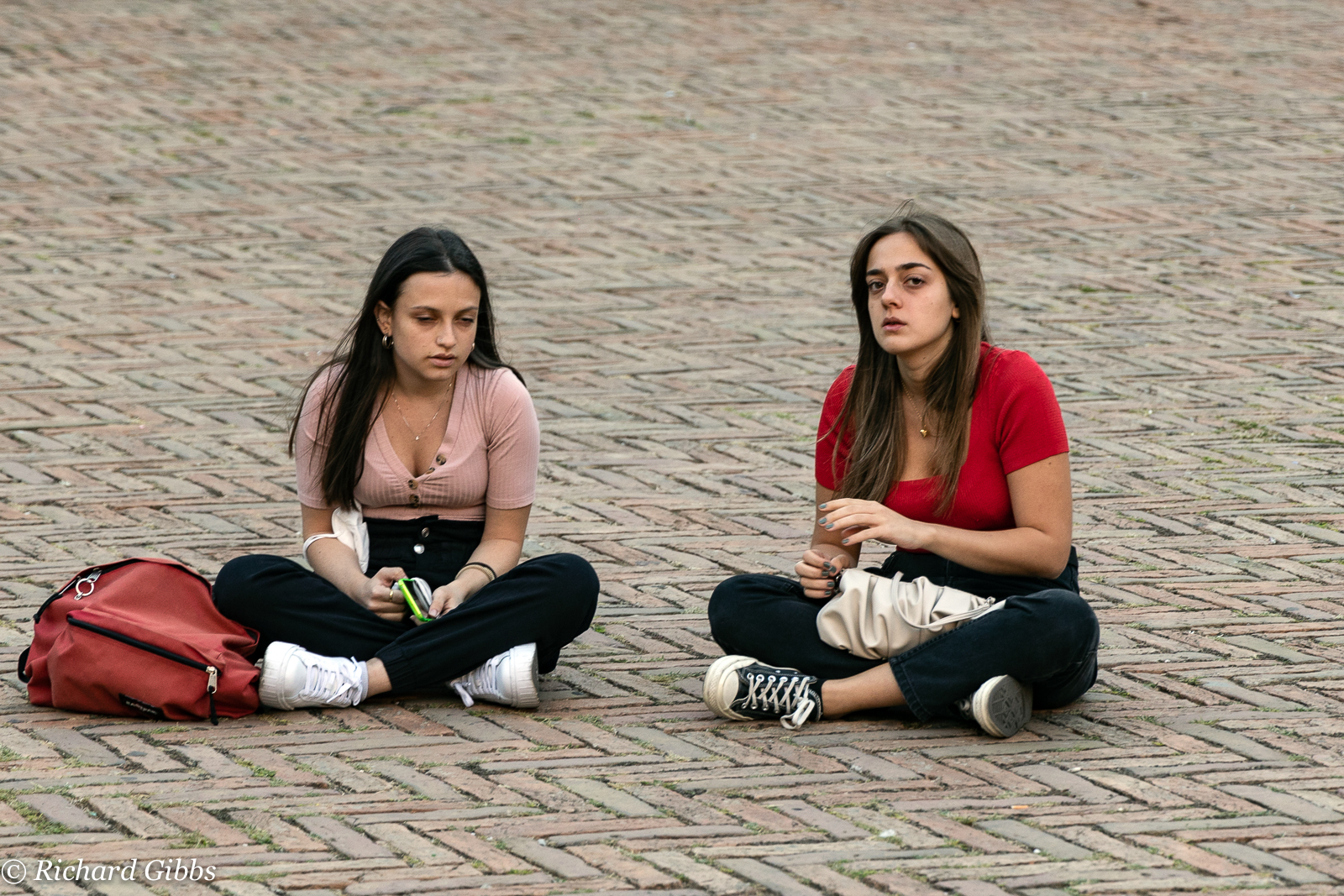 I move on, towards Montalcino, but stopping at Val di Cava, where my old friend, Vincenzo, is still making Brunello on what was his grandfather's estate.  I delight in seeing him again, after many years, and finding that his son, Pierfilippo (who is about the same age as our Hannah and who we first met when they were both in car seats) now works with his father in producing innovative fine wines from superbly healthy san giovese vines.

From Montalcino I wind down to the isolation of Sant'Antimo, where Charlemagne buried some of his troops a few years ago. 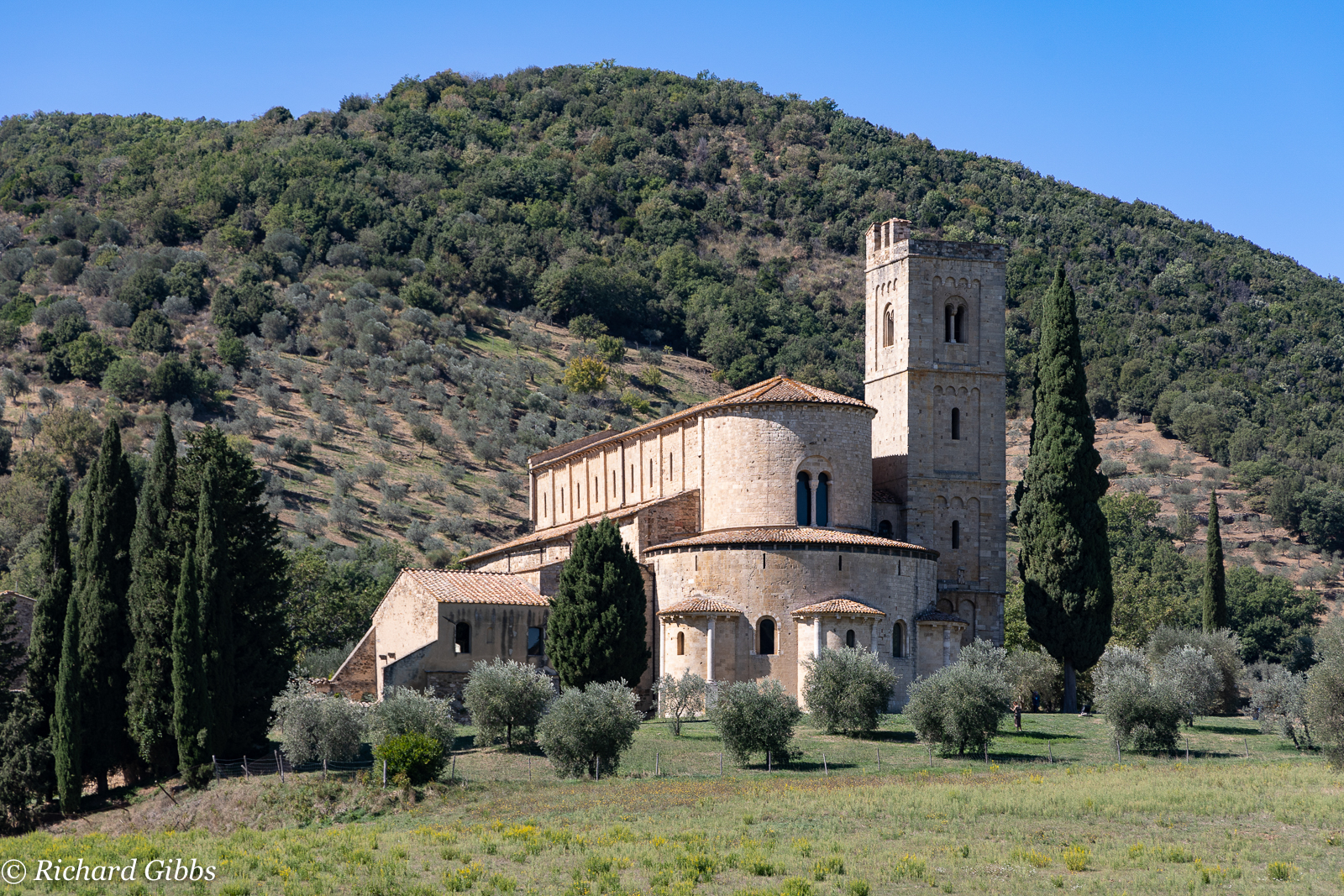 We have visited this beautiful church time and again over the years, and clearly remember when it was more or less abandoned, and that if you turned up to see it, the custode would zip down from the village on his motorino and unlock the dusty door, allowing us into the cool interior, which was lit by windows glazed with thin slices of alabaster (or onyx - or both). 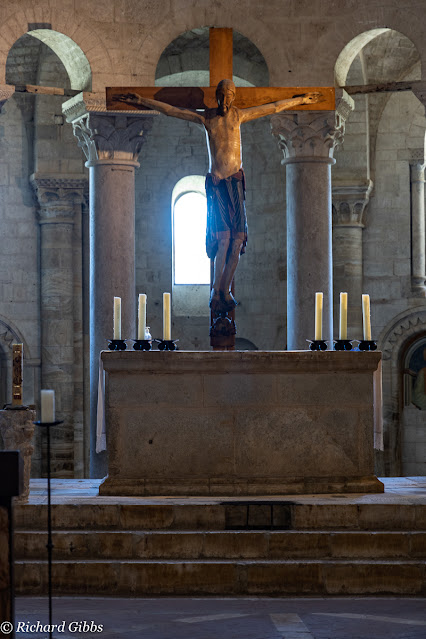 Now it is a commercially viable monument and active church, with regular services on Sundays, and parking for coaches from Germany.
Among my abiding memories of this place is seeing a Roller emerge from its nest in the campanile - alas, such undisturbed natural wonder is now lost to the popularity of the architecture..... 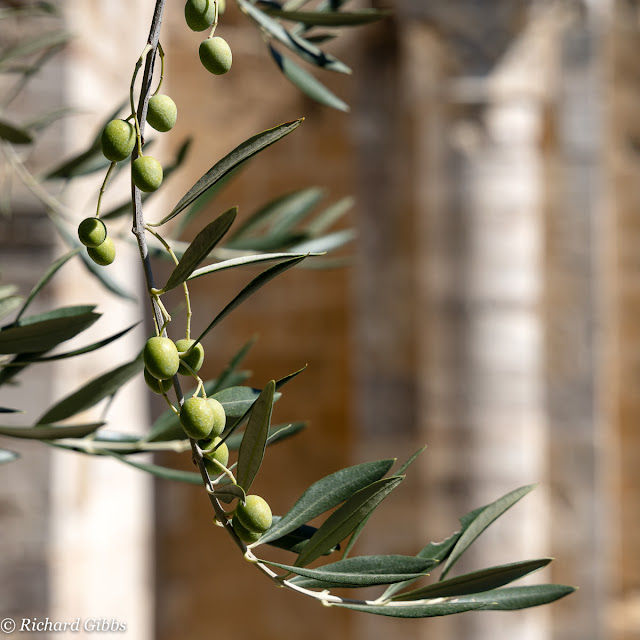 On the road to my destination another landmark rises ahead of me. This is the Castello di Velona, picked out above the vineyard and before the peaks of Monte Amiata.  Many years ago Amanda and I explored this place when it was a ruin, the roofs falling in, mattresses rotting under the sky, and an ancient ledger fluttering in the breeze with details of harvests and expenditures fading in the sun.

Then I climb a rough track and roll to a halt before my friends' house, at 600 metres up the shoulders of the mountain. 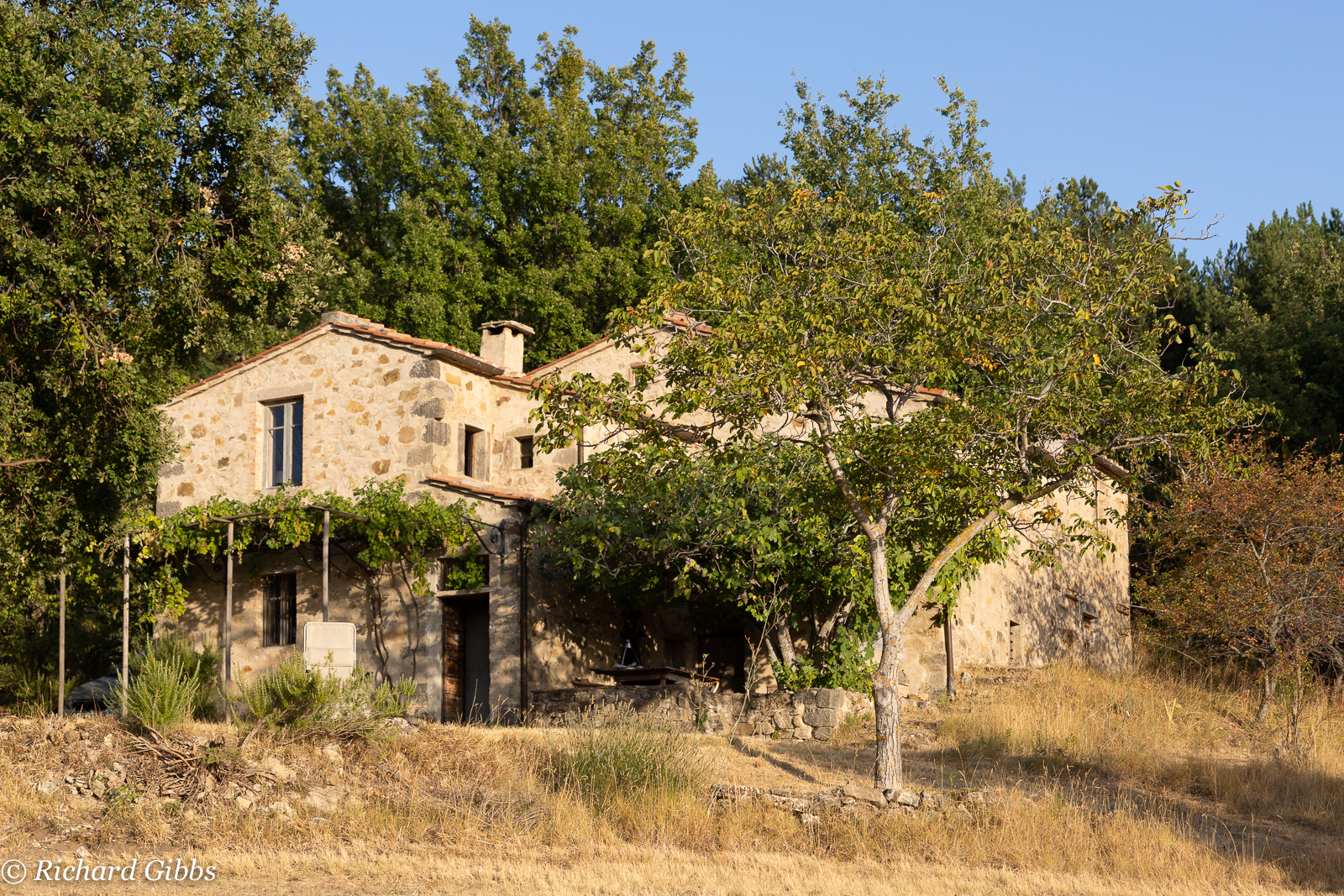 Little has changed here since I first visited in the summer of 1976.  Over the years Amanda and I, and our children, have been guests of David and Sarah, our friends, in this lovely old farmhouse. I used to place my clockwork wristwatch on the windowsill by my bed and would wake in the morning to hear it ticking, while golden orioles squeaked and squawked in the cherry trees outside. 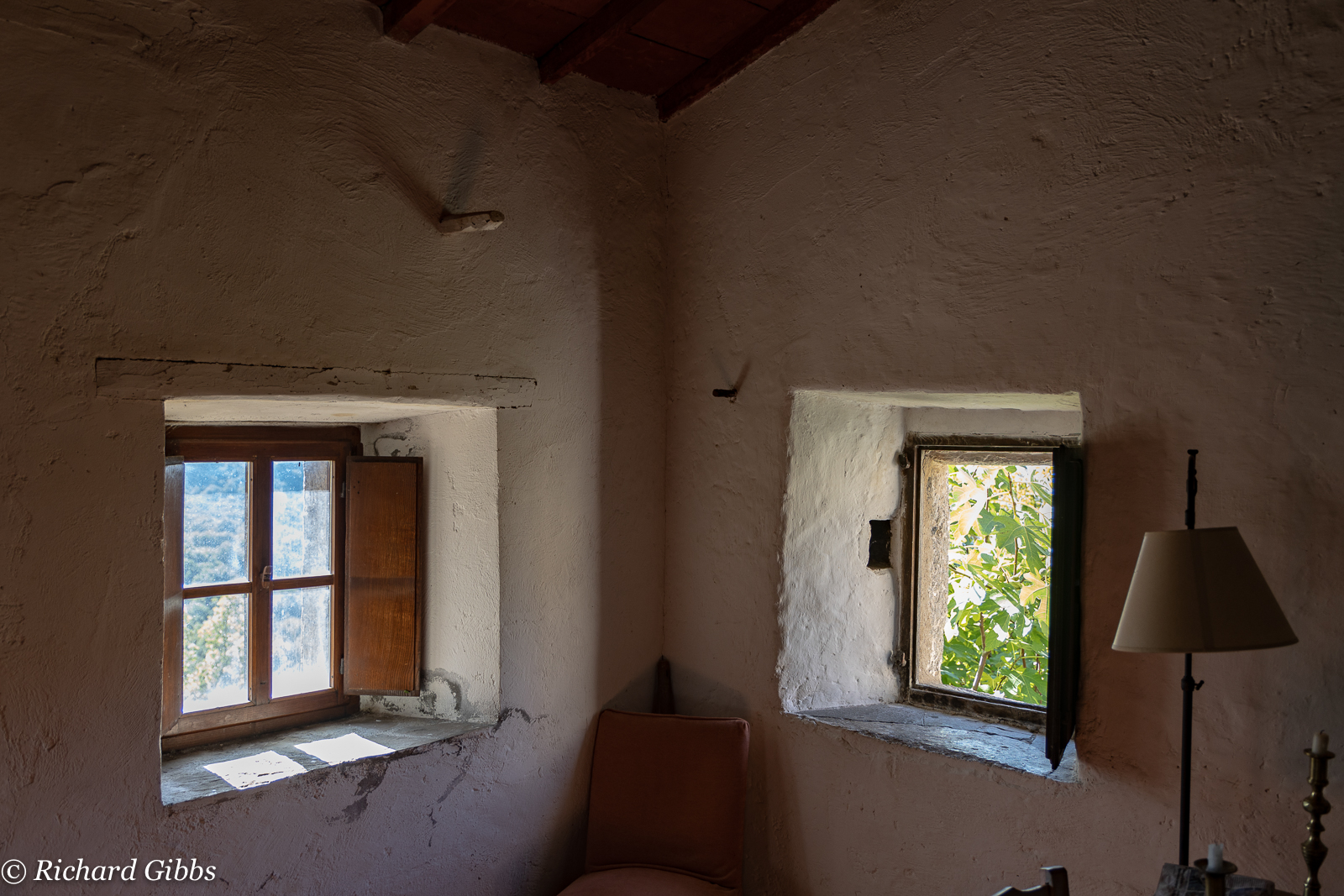 Autumn crocuses break through the dry thatch of the grass around the building, 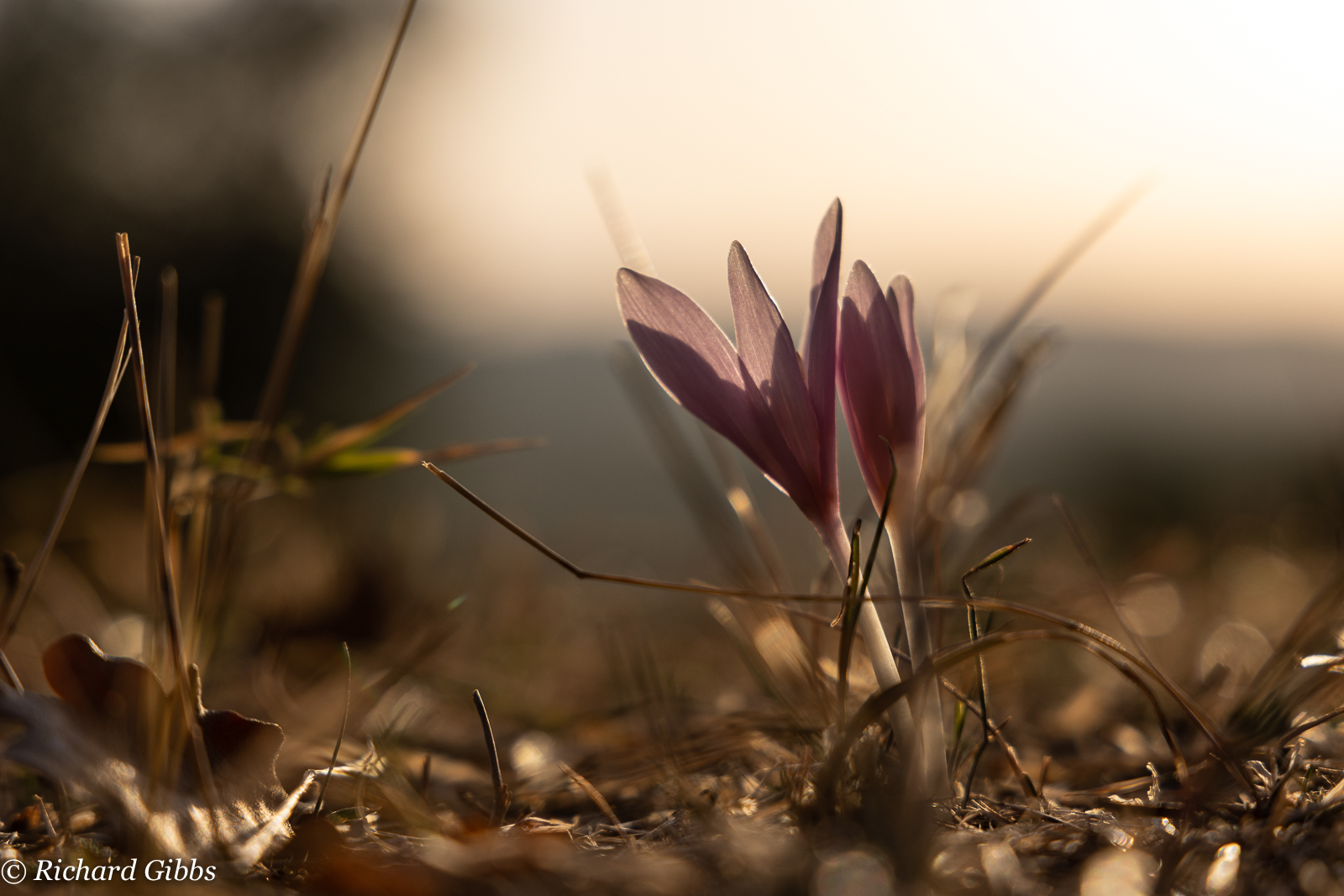 A Grayling butterfly heads for the bottle of Rosso di Montalcino that Vincenzo gave us for supper, 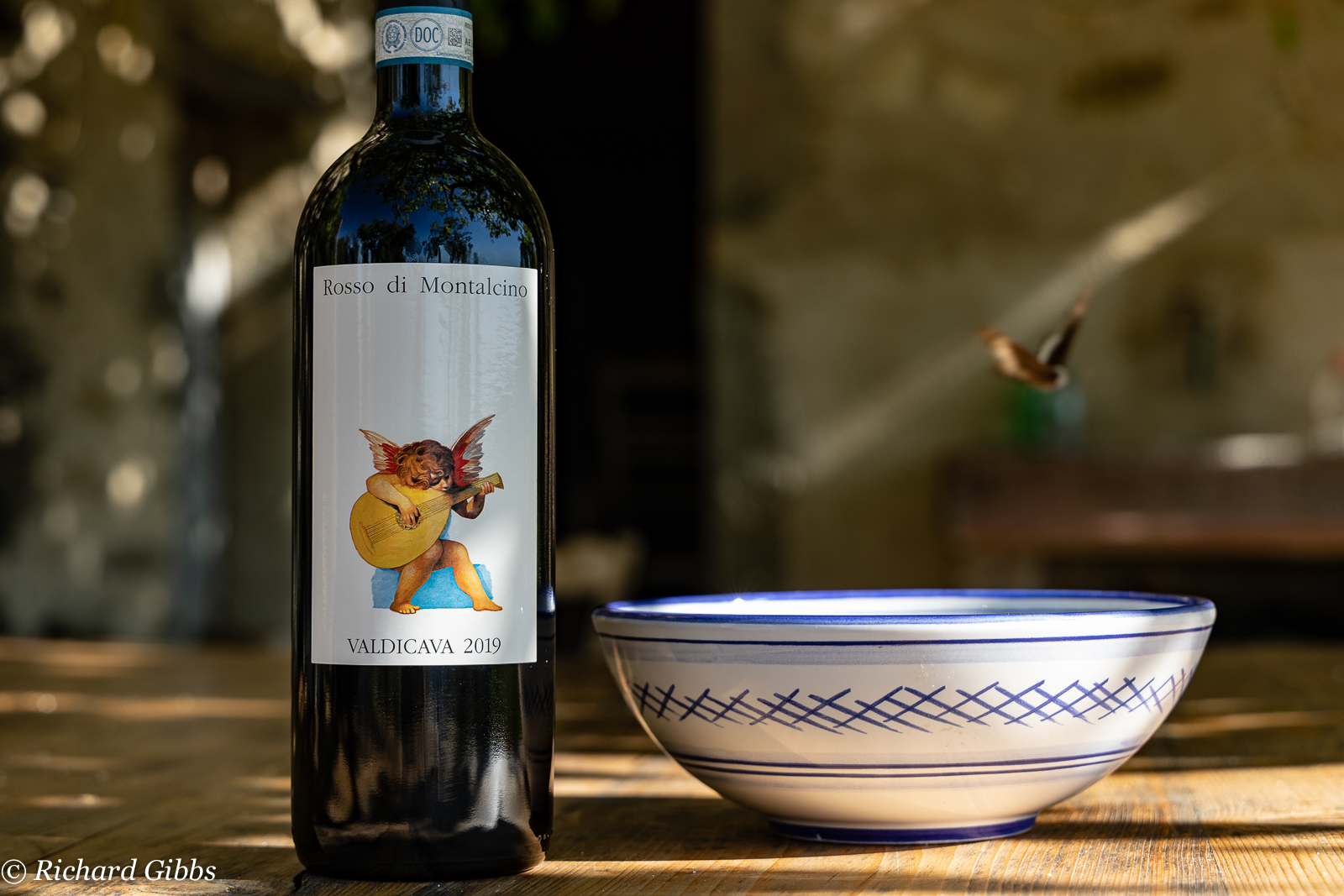 In the valleys below smoke rises from where the contadini are clearing the ground below their sweet chestnut trees in preparation for the harvest, 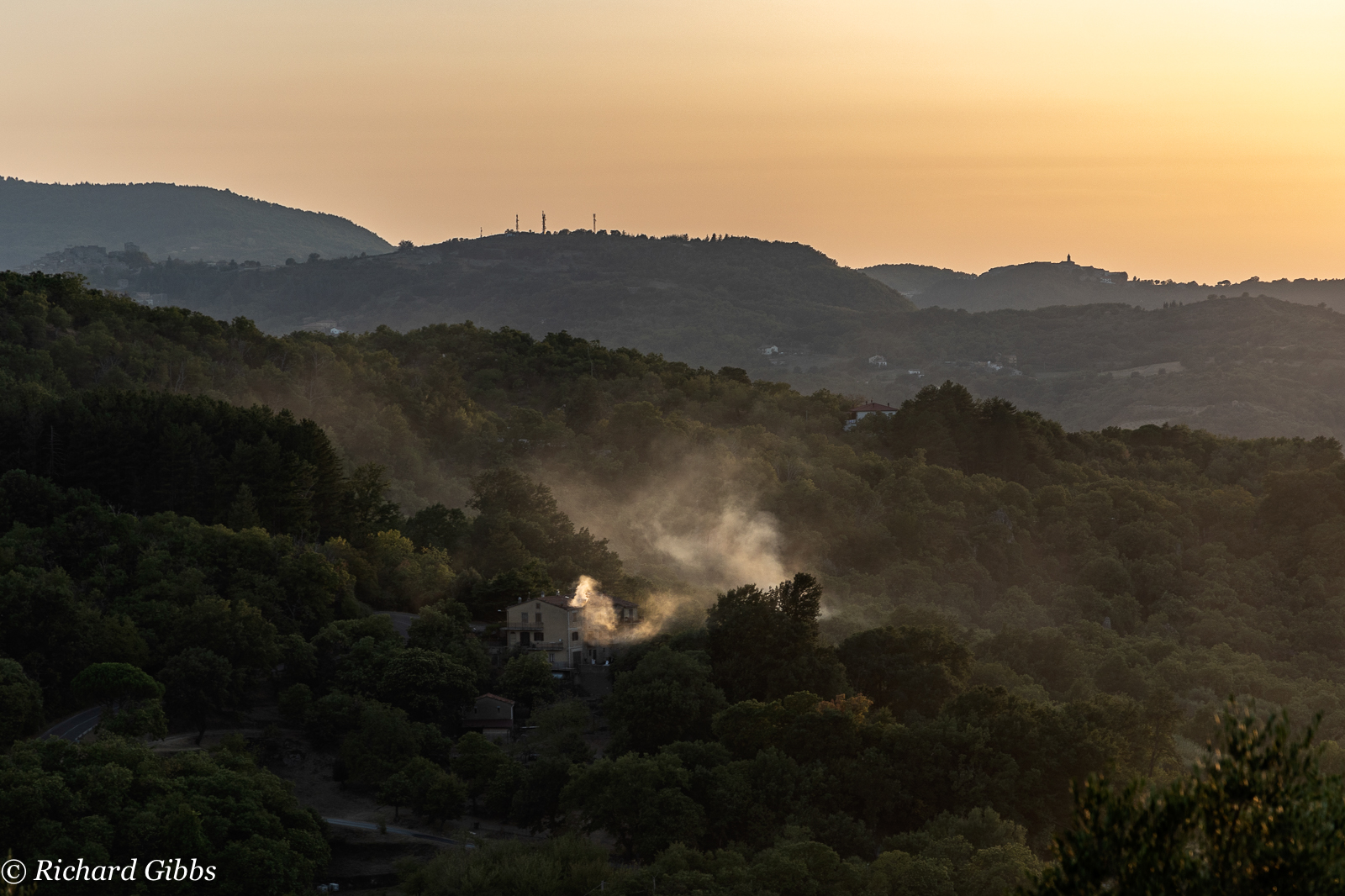 The sun dips down to the horizon, backlighting the hills towards the sea and beyond, the heights of Elba just visible on the left.....

And then it is gone and the sky is just full of colour behind the walnut tree as everything fades.... 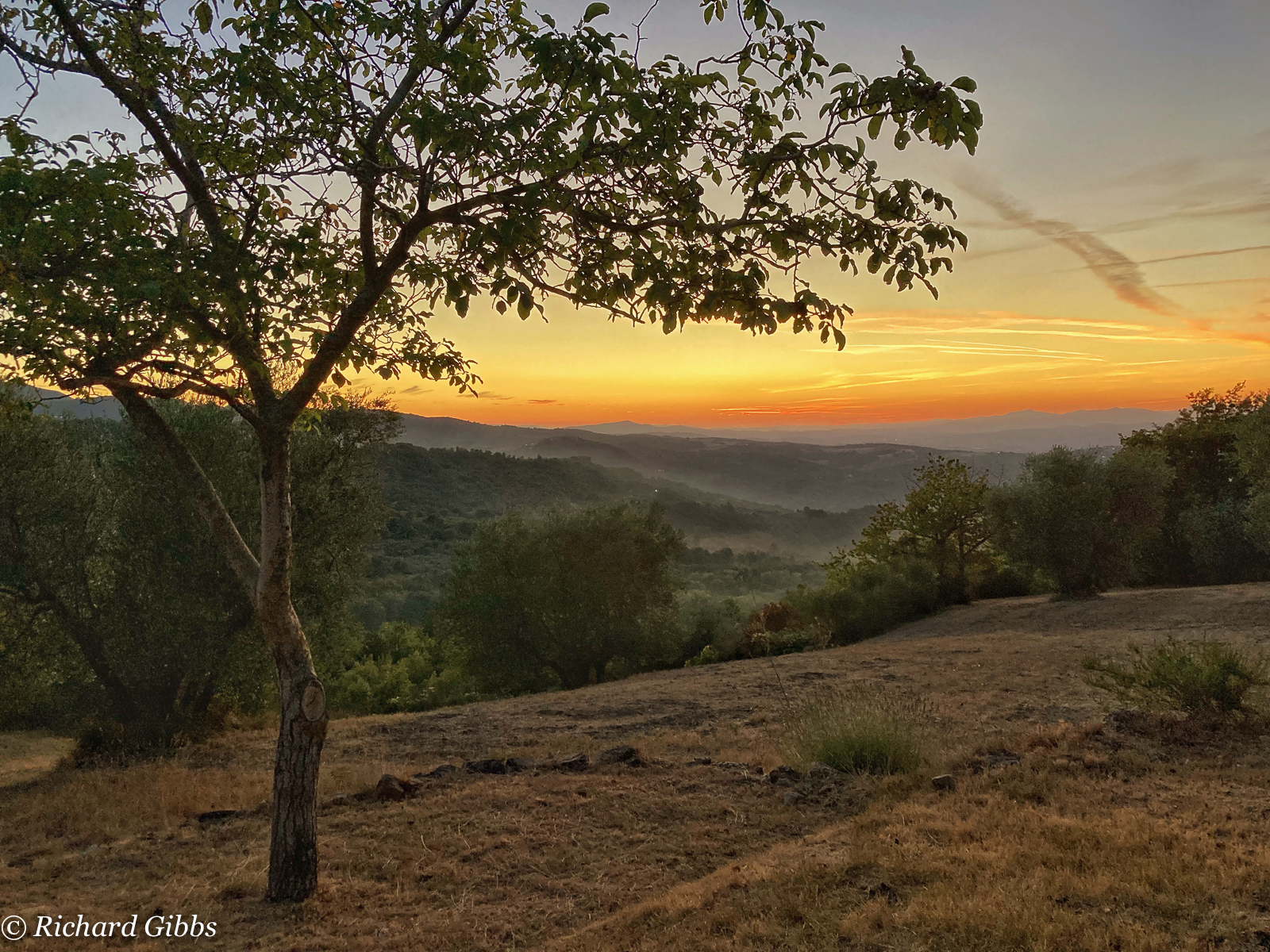 My heart is at ease. Back home I know Amanda is cared for and safe. It is strange to be here, without her. My guilt begins to surface again as I wish she could be with me to enjoy this glorious evening..... But then I know she would be happy for at least one of us to carry these memories.
Posted by Richard Gibbs at 20:36
Labels: bistecche alla fiorentina, Brunello, Castello di Verona, Il Sodoma, Isola Bella, Lago Maggiore, Montalcino, Monte Amiata, Monte Oliveto Maggiore, Osteria Da Cice, Sant'Antimo, Siena, Stresa, Tuscany, Val di Cava
Location: 58038 Seggiano, Province of Grosseto, Italy