And the coming home 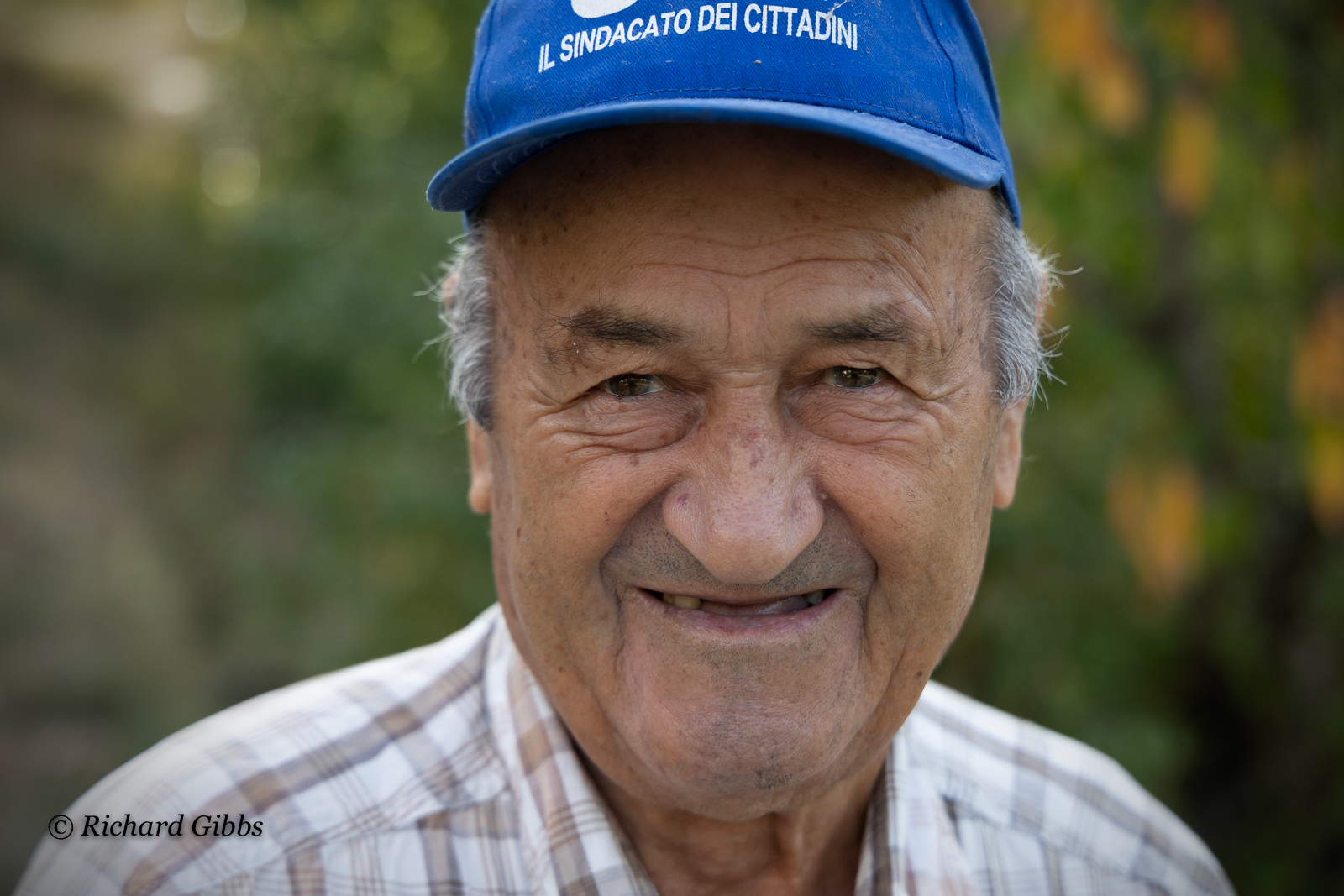 When I was a boy I used to really enjoy weekend walks, often exploring abandoned farm buildings or distant woods with a pal, or sometimes inviting myself to lunch at unsuspecting households of friends.  The wrench, however, was the retreat, the having to go home, the retracing my steps.  A sense of dull depression would creep over me, not because I didn't like home, but because it included the responsibilities of chores and homework and school the next day.....

A similar feeling descends on me as I think about the long road 'home.'

However, before I leave, we take a trek up Monte Labbro, a 1,200 metre hill not far from Arcidosso, once the home of the charismatic 'Prophet of Monte Amiata' David Lazzaretti (1834 - 1878).  Four kestrels sprint and flutter in the strong mountain breezes - possibly two young ones being schooled by their parents?  The views from here are wonderful, across the Tuscan countryside and up to the heights of Monte Amiata (1,738 metres) with the plumes of steam from the geothermal power station near Santa Fiora in the foreground: 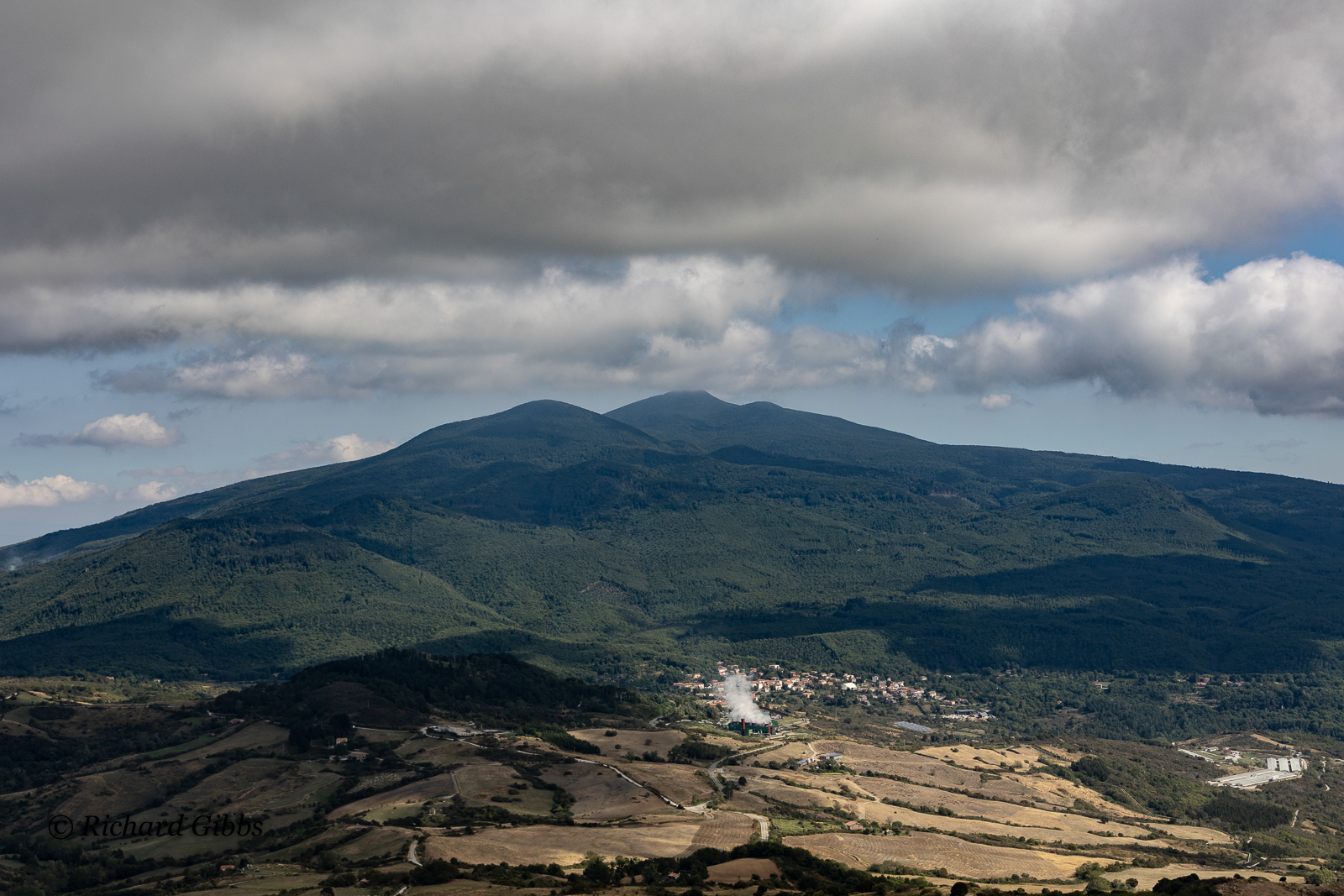 And then, all too soon, it is time to bid my friends farewell, including ninety-something year old Corrado (pictured at the head of this piece), who was born in the house where I have been staying (but who moved down to be beside the road around fifty years ago).  We have shared many a glass of his rustic wine in the past, but today he spills me a coffee.  His wife, Concetta, died exactly one year ago, and he is managing pretty well, despite failing eyesight, though complains about the difficulty of getting domestic helpers who don't put things away in the wrong places.....  Considering that he was born in the time of Mussolini, was a boy when German troops stomped and shot their way through in the 1940s, and then lived his adult life under 66 different governments, considering all that, he is in pretty good shape, and I hope I will see him again on my next visit.
I drive across country, crossing the River Orcia and past some spectacular examples of biancane - eroded rocks typical of the Crete Senesi  - then wind up past La Foce (famous home of Iris Origo) to Montepulciano and then down to the Val di Chiana and on to Arezzo.
It's all happening here.  A sunny Saturday and everyone is in their finery..... 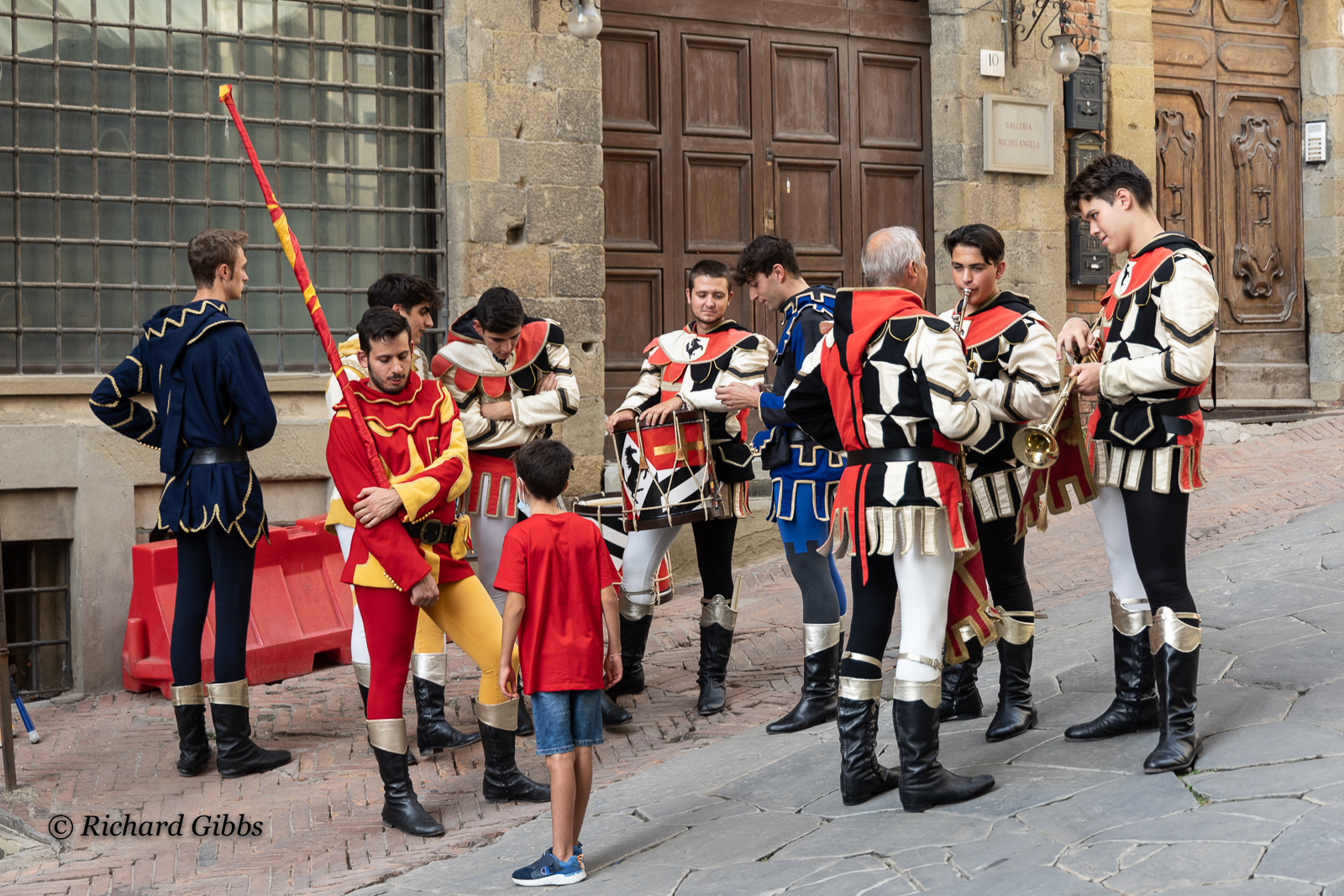 In the Piazza Grande a massed gathering of paramedics and mountain rescuers sing the National Anthem for me and we all are then treated to an aria from La Traviata. 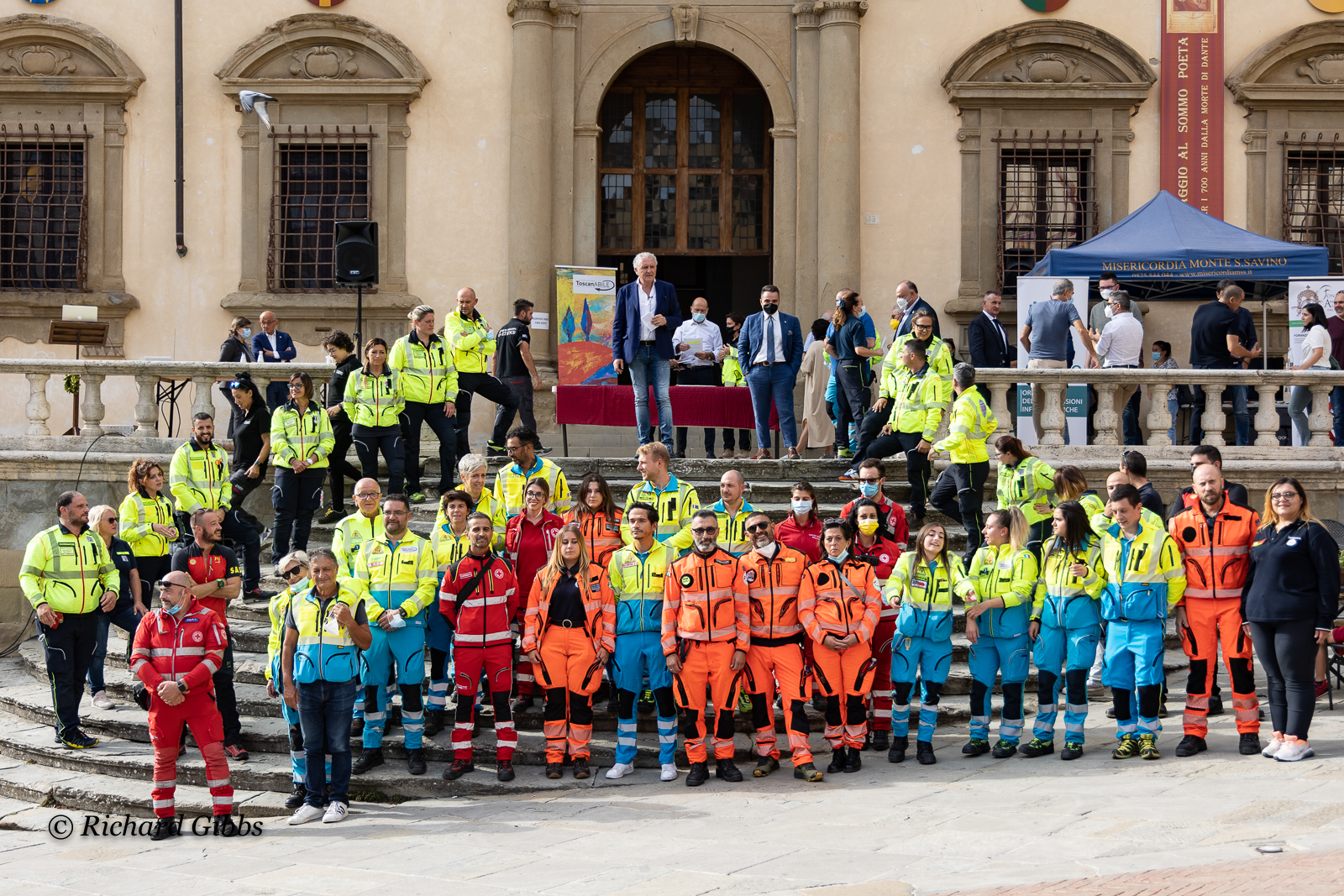 There's a wedding in the Cathedral, which swallows the beautiful bride into its dark entrails: 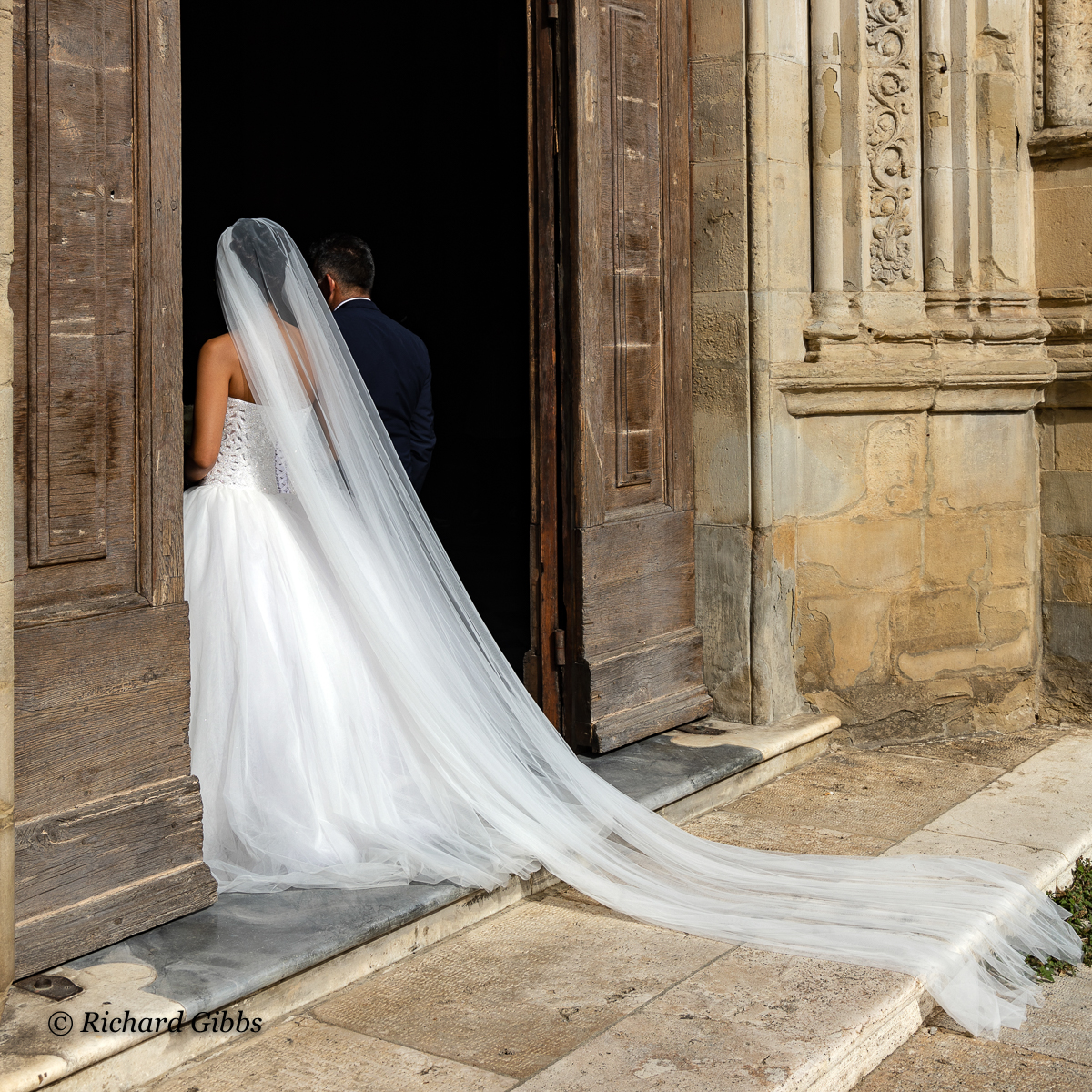 And another in the Pieve di Santa Maria, where the priests are taking no chances: 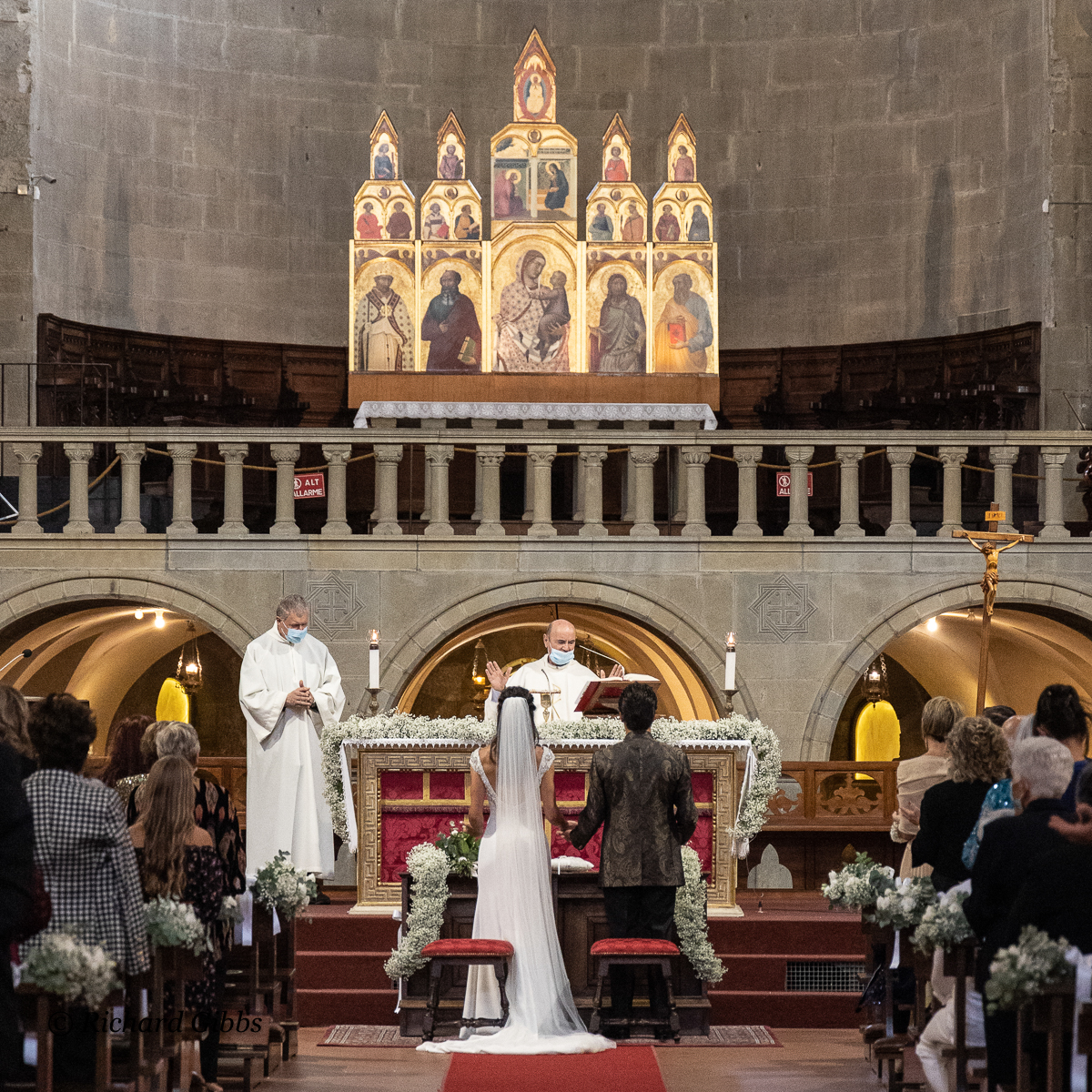 It's a day for parading (don't they look fabulous?): 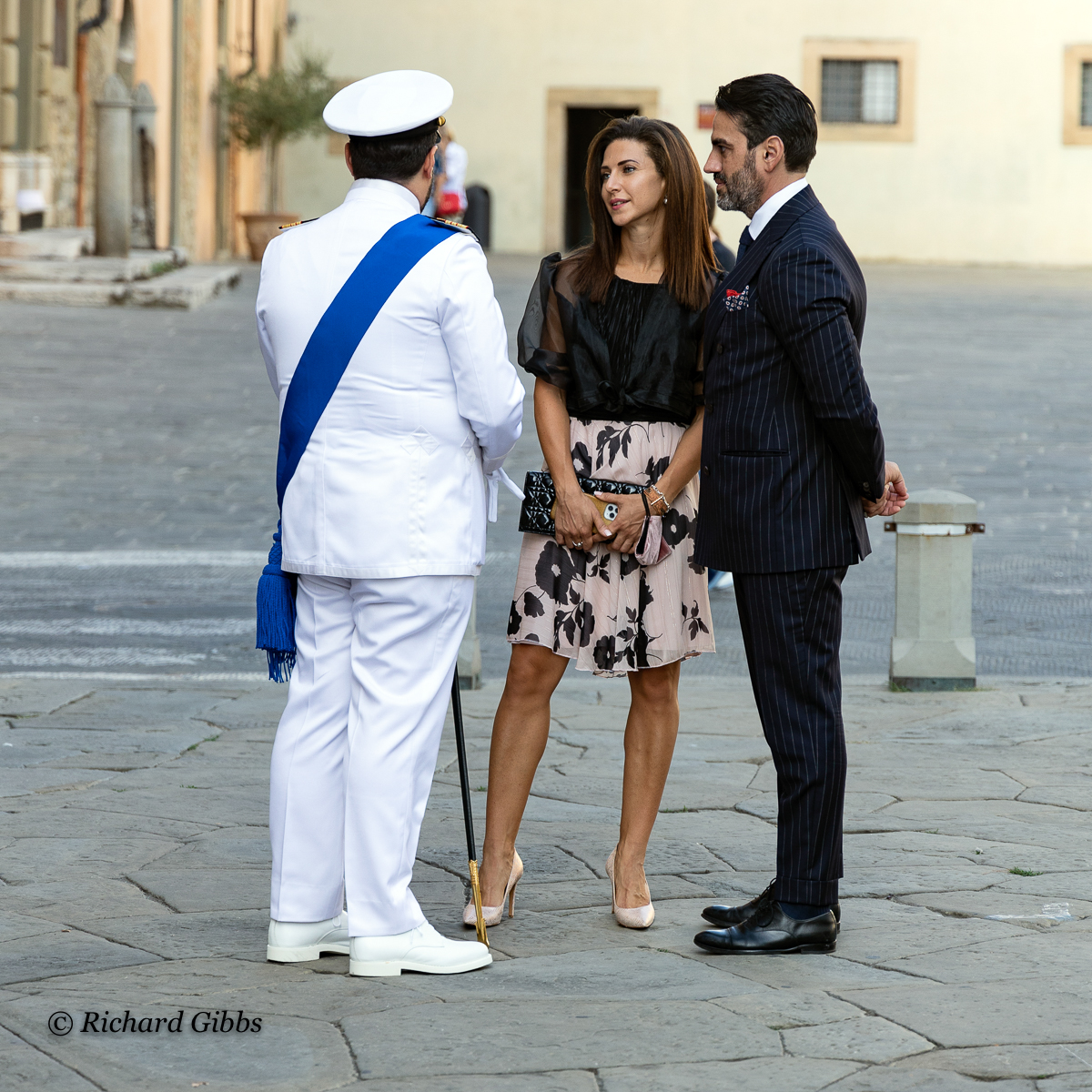 And then an evening for the Passeggiata (soooo relaxed!): 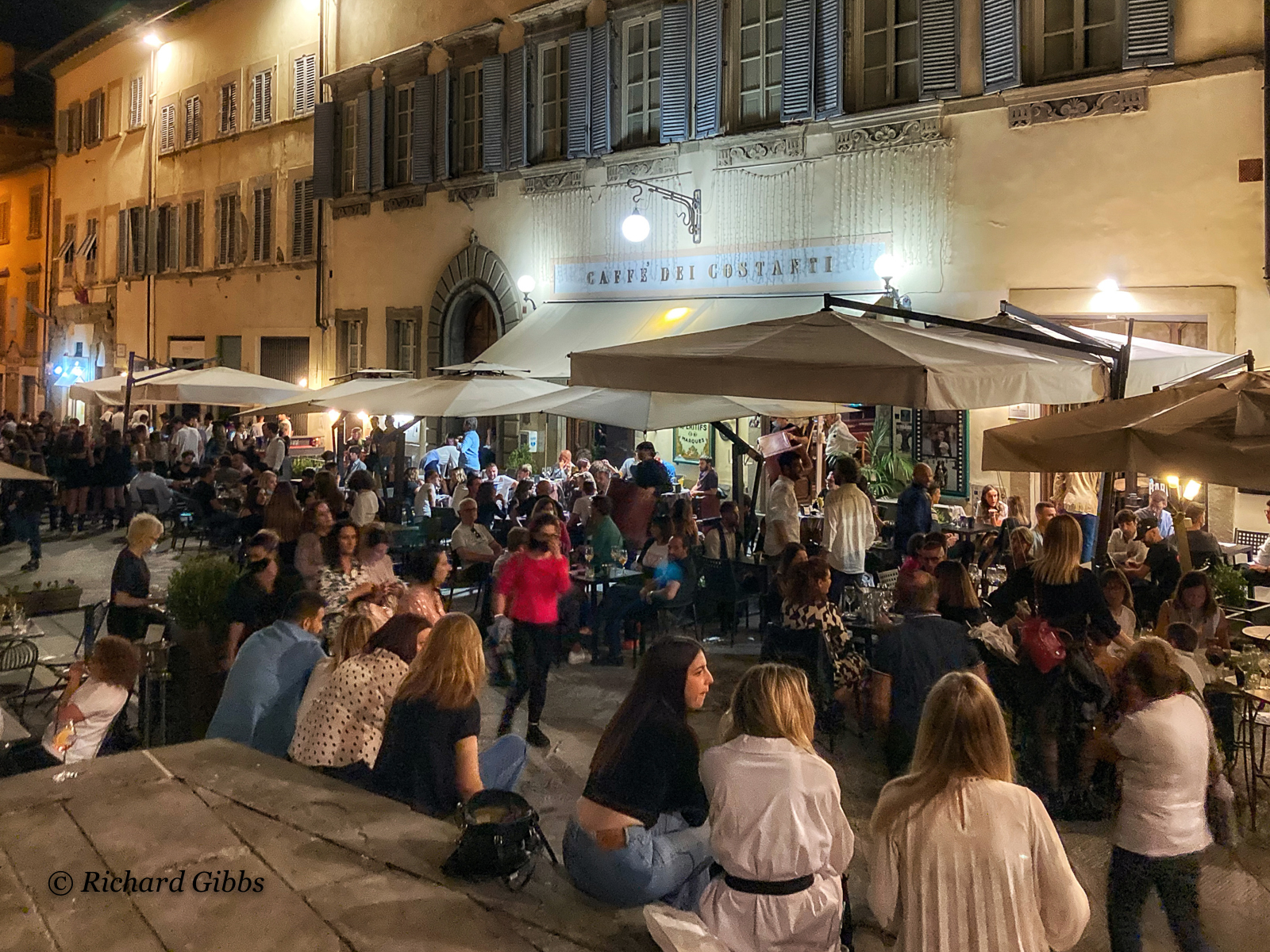 I feel rather alone in this city this time (Amanda and I were last here a few years back) without my little companion - I guess weddings remind me - and yet there is life all around, children dashing about playing chase in the Piazza, and hundreds of really healthy looking young people engaging with their friends in a ritual of Saturday Night excitement, the girls all dressed in black skirts or trousers, bare midriffs and fine tops, the young men studiously less careful, except in their hair cuts.
I take comfort in the bottle-lined interior of La Torre di Gnicche (Piaggia S. Martino 8), where la signora Lucia makes me welcome and I sample some local affettati and vino for my supper.  It is quiet, even though it is barely fifty metres from the Piazza Grande.
I retire to my hotel room, high above the central streets, but can hear, through my slumbers, voices well into the night, with the final farewell calls around three.  But all in good humour - no sound of breaking glass, or voices raised in drunken violence.  It is calm, and friendly, and harmless....
In the morning, with clouds beginning to gather, I have to return the car to Florence, and then I stroll about the crowded, smiling streets. 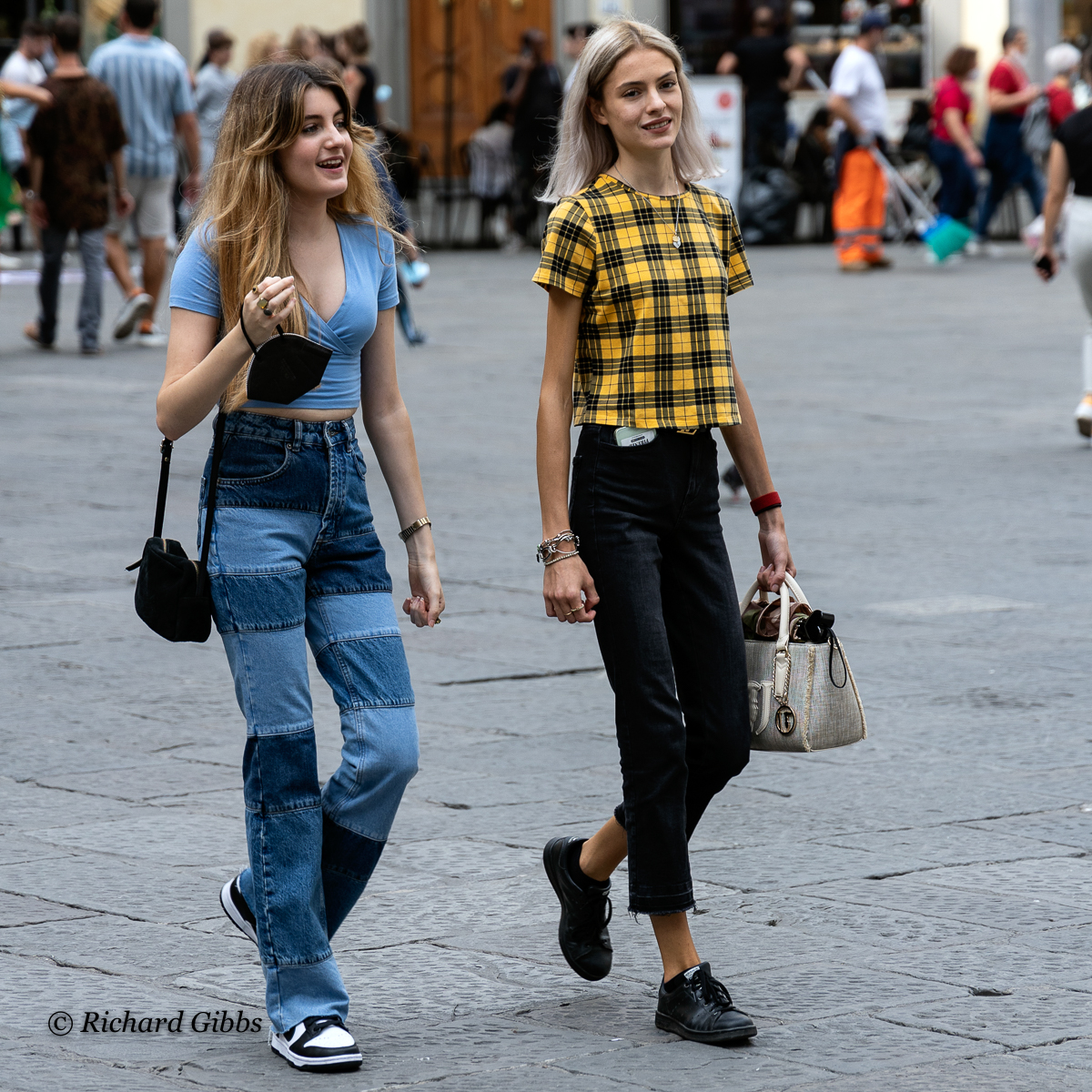 It is beautiful, and it is busy.  2020 was a disaster year, of course, but this year things have picked up.  One million two hundred and fifty-five thousand tourists have been registered in Florence in the summer of 2021, a rise of 185.7% over last year (although this is still 60% down on 2019). 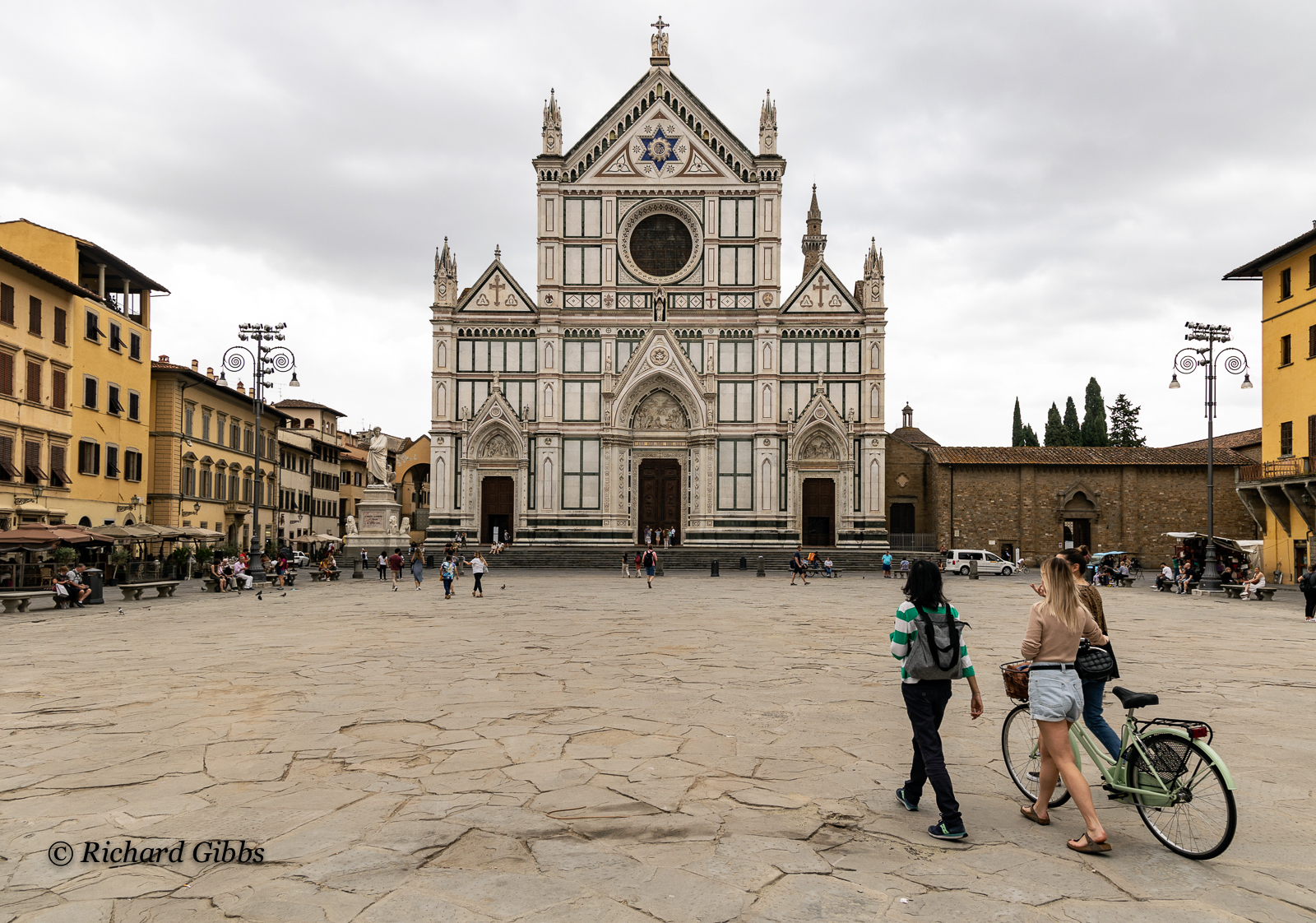 Although many of the visitors here are Italians who have chosen not to travel abroad (or who could not) most of the tourists here are Europeans (German, French, Dutch, Belgian, Swiss and Austrian) but not American or Japanese.  Apparently this is especially thanks to the introduction of the European Green Pass in August - and  I can vouch for the efficacy of this.  My NHS Covid Pass App (which I printed out and carry in my pocket) has been accepted in every bar and restaurant on this trip - I have just had to show the QR code and every little zapper from Paris to Tuscany has recognised me and given me a big green tick - how simple is that?  And it means that not only do the baristas and restauranteurs know that I am doubly vaccinated, but all the other diners or drinkers can rest assured that I am too.  No pass = no entry.  OK, so there may be some disappointed people, and people who have reason not to be vaccinated, but for the vast majority of people this brings peace of mind, and means that places can now function almost normally.  I have to have a driving licence to drive, and my wife is no longer allowed to, which, practically speaking, means that the roads are safer than if everyone could drive whether licensed or not.
Row, row, row your boat, gently down the stream...... 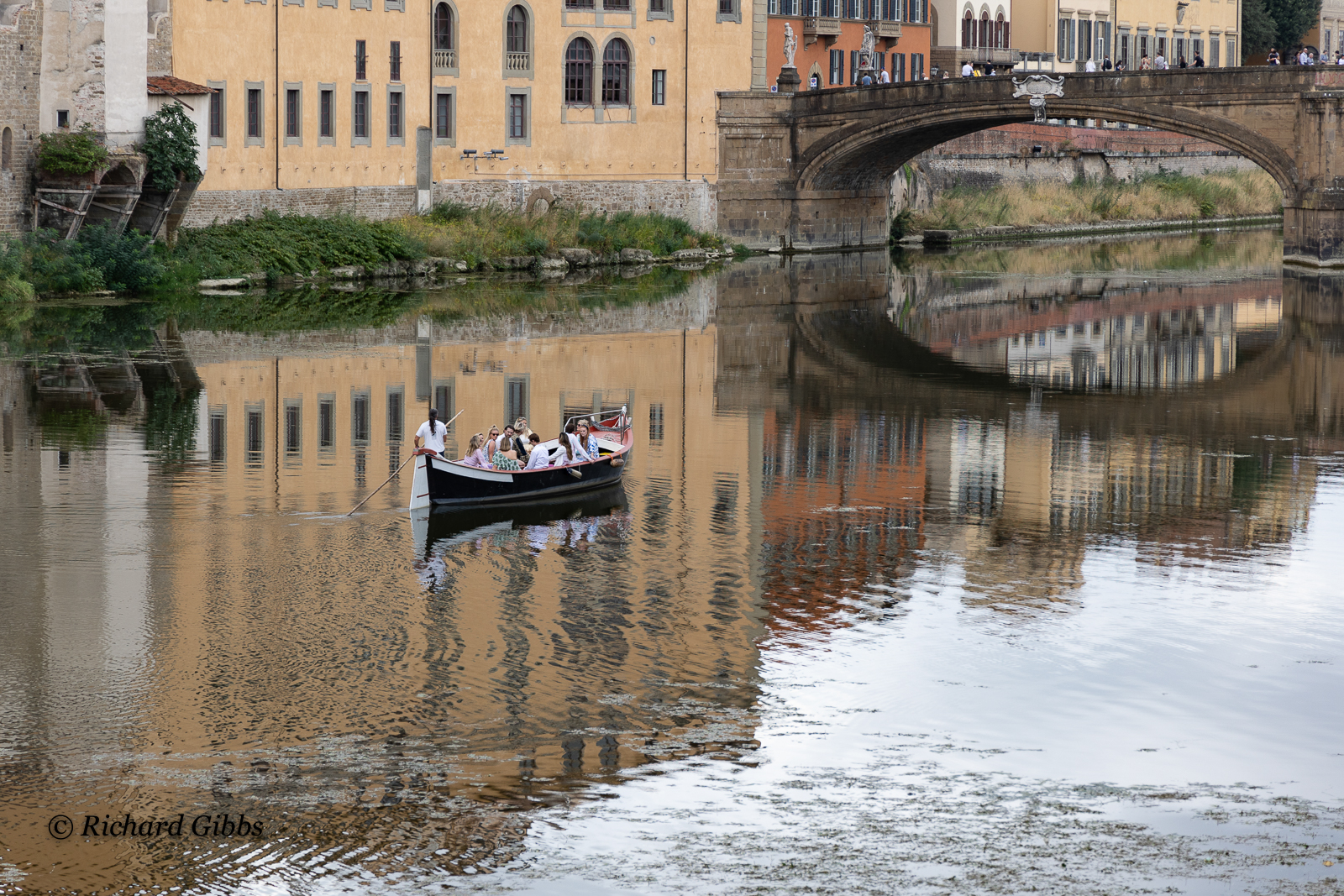 Anyway, the skies darken and thunder rumbles.  As predicted, the heavens open and a heavy storm sweeps the streets clear of mankind and unkind.....  For a moment I think my roof is leaking, but then I realise the paint has run....  It isn't like this in never land.  You simply don't know up from down.
And then it is over.  The cobbles gleam and there isn't a crowd in the sky. Pretty soon it will be tomorrow and the world will forget what has been and what.  But for now, I have the extraordinary privilege of staring at Brunelleschi's dome as if it were about to be completed: 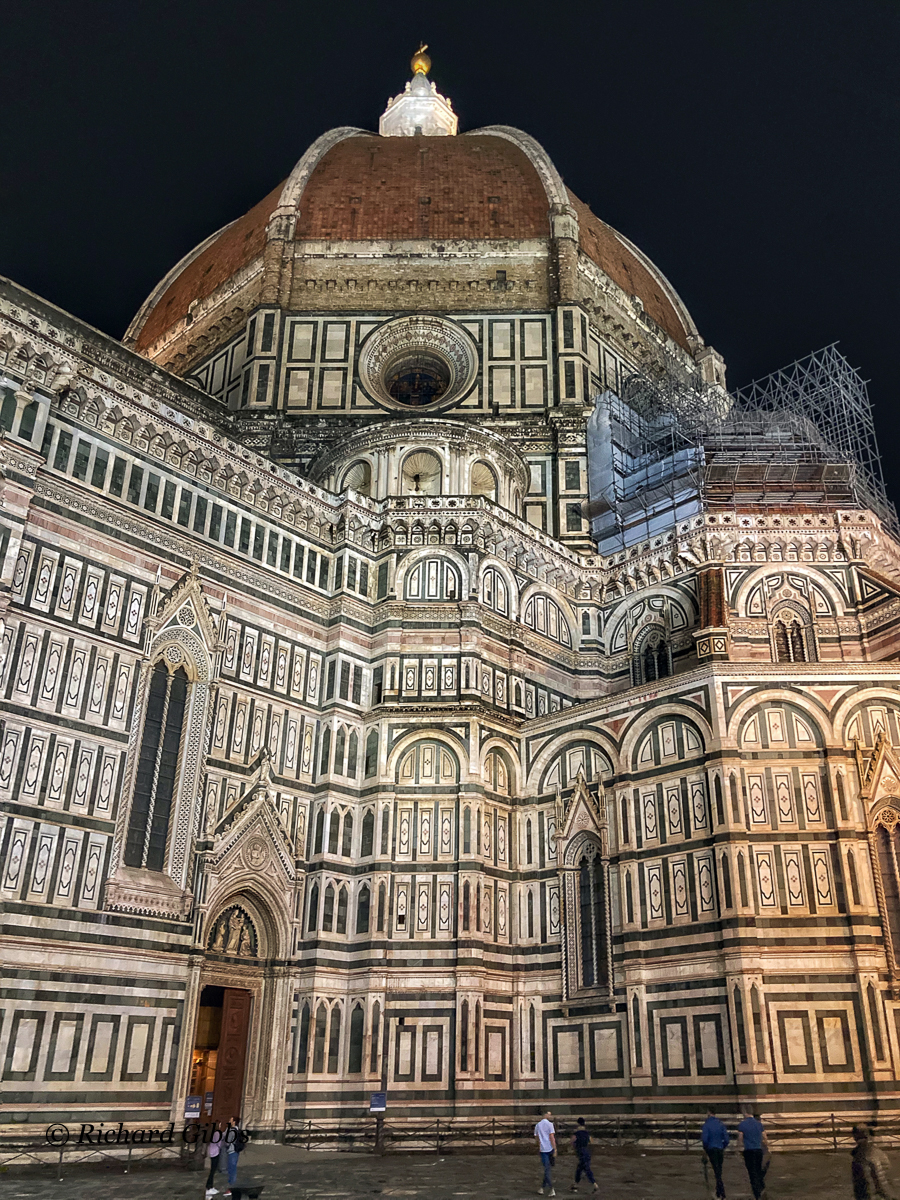 And a strange light illuminates the facade of the cathedral, bathing it in a pinkish glow: 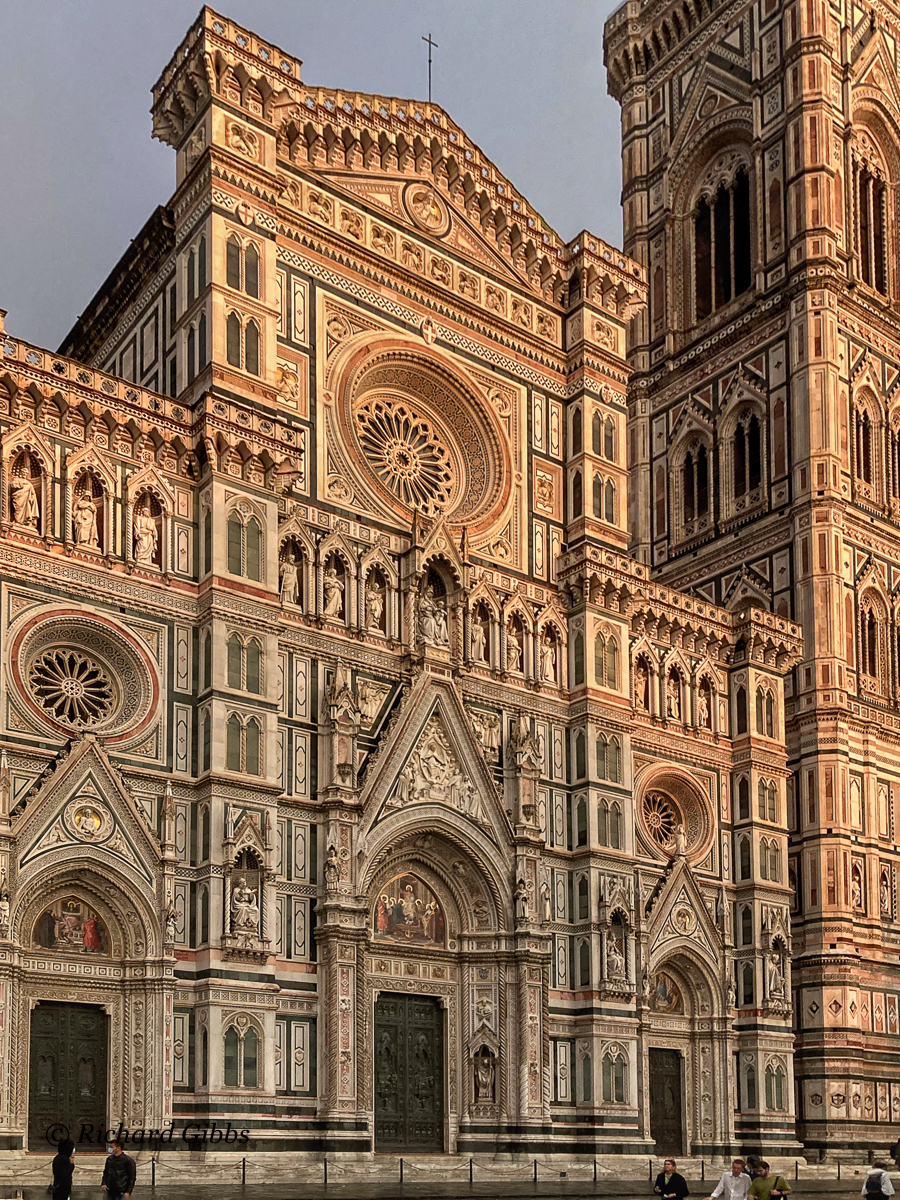 Night falls.  A pizza and a glass of vino, a wander past the hotel I used to prefer, 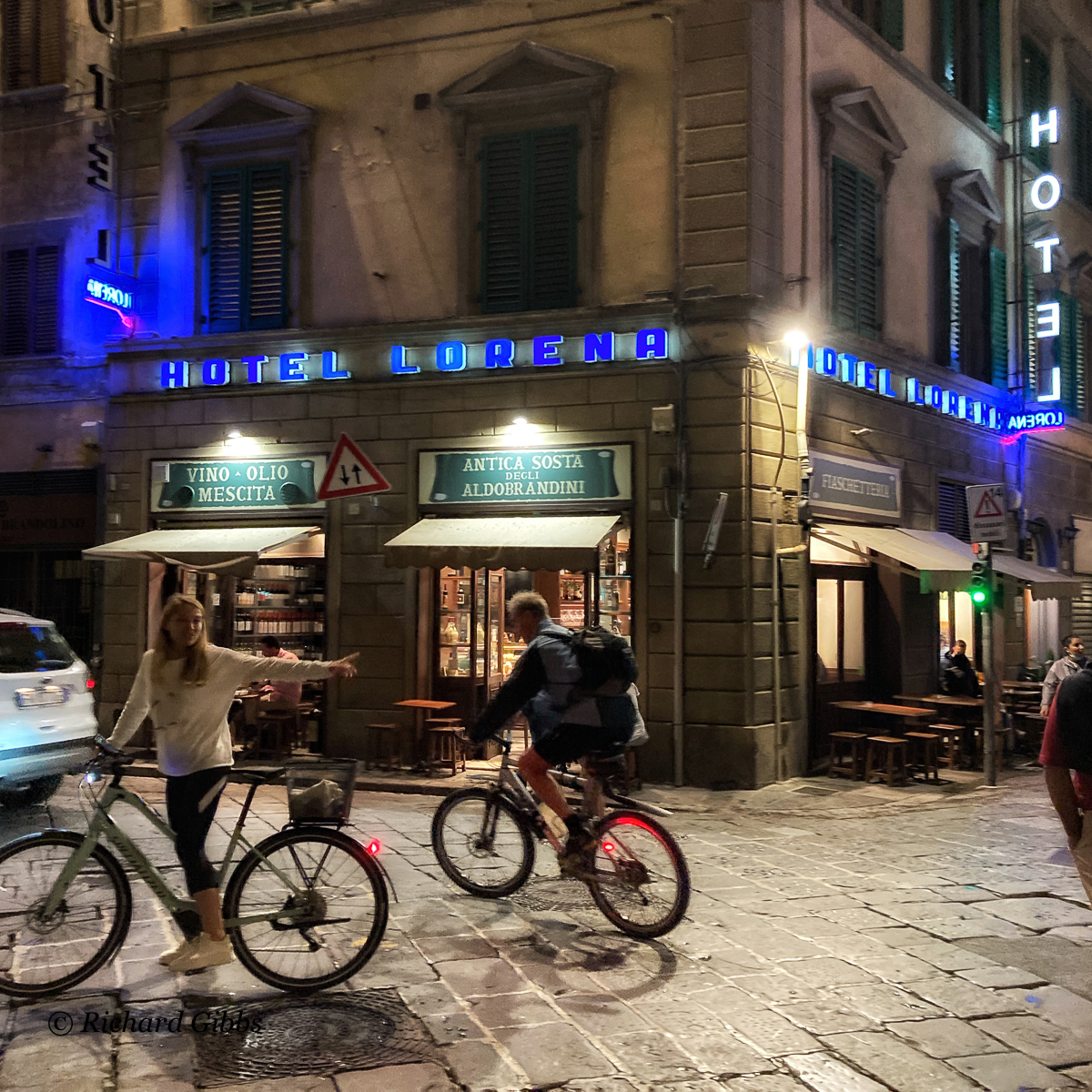 and bed.  In the morning I board the Freccia Rossa to Milan, where, in a complex of modernity and imagination, including a thoughtful garden of delights and some ancient empty streets, I have a few hours to wait, 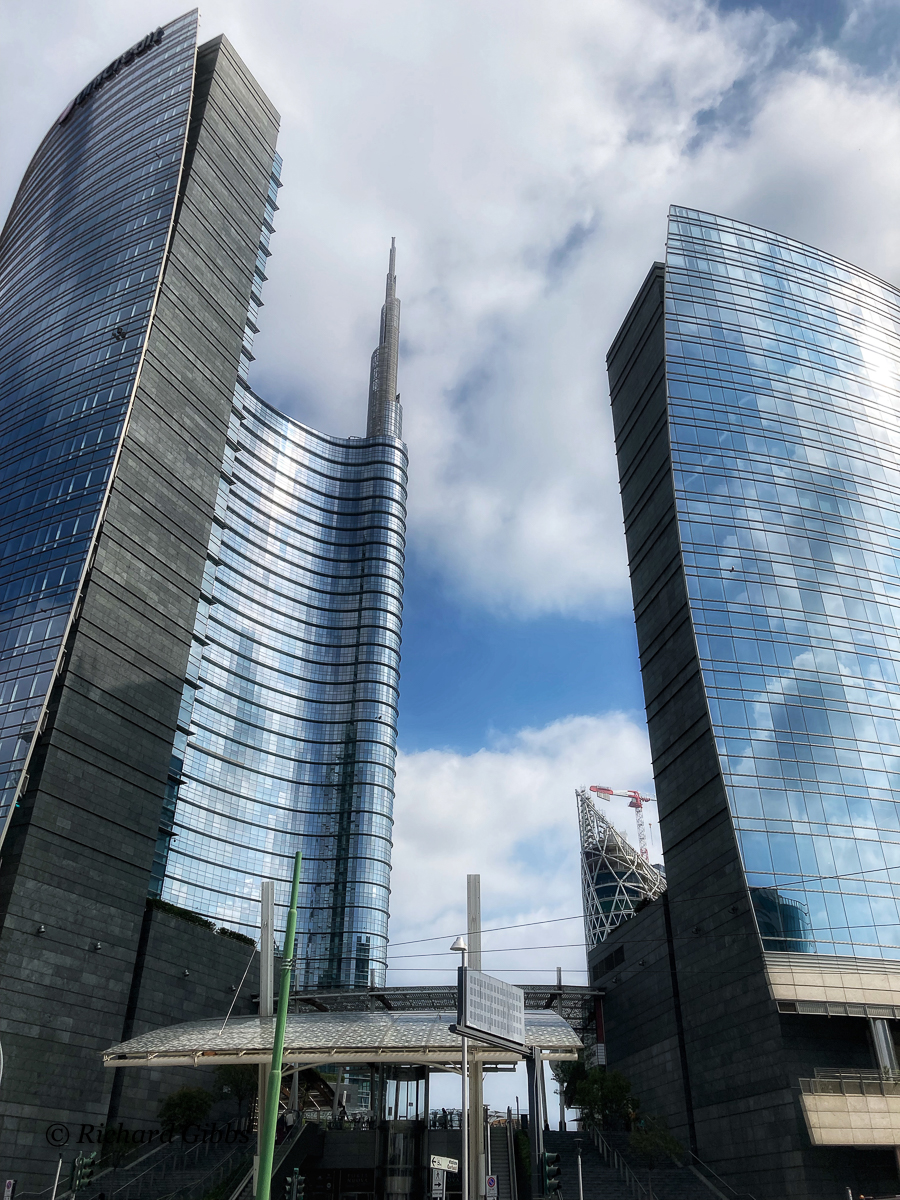 Which wait I partially fill by indulging in a last meal before my execution.... A truly beautiful risotto alla Milanese followed by Abbacchio a scottadito (with a side dish of porcini trifolati) with some Roero Arneis (2019) and then some Nebbiolo d'Alba.  Thank you Alla Cucina della Langhe (Corso Como, 6) - If you are in the neighbourhood, please give them my regards.
And then it is all aboard the TGV for Paris, eight hours (it is delayed) of scenery and sneezing (not me, but the woman next to me), hauling sometimes at 300kph.  I cannot help but feel the gravitation pull of Italy behind me, as I nervously approach my homeland. 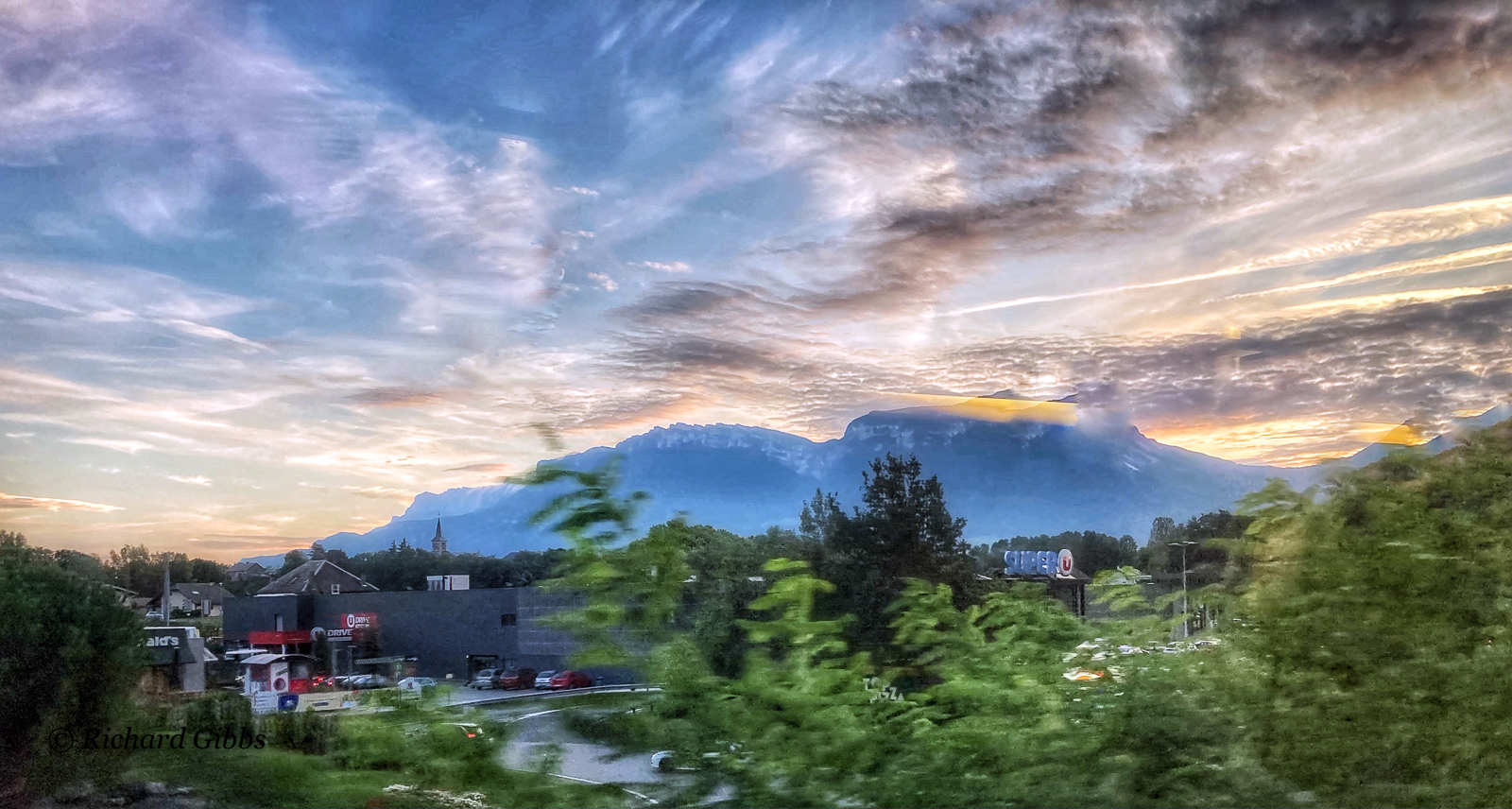 I won't go on.....  I know some of my readers will have different ideas, but the absolutely worst part of this trip was my return to the UK.  I was prepared for this - I had had a Lateral Flow Test in Florence (supervised online); I have been twice vaccinated against Covid 19; I am healthy and have no obvious symptoms; I have a new blue British passport; I have the NHS Covid pass; I spent around £200 on tests including the Day 2 PCR test for my return; I was born in the UK; I pay taxes; I have a permanent address in the UK....  But despite all this I was reduced to a trembling wreck at the Gare du Nord by the overriding feeling of unwelcome and inefficiency (the Gov.uk website was down exactly when I needed to show my Passenger Locator Form).  After ten days of friendly (sympathetic) travel through three different countries I really felt it might have been preferable to have gone to Calais to hitch a ride on a leaky dinghy to Dover.
Indeed, if it weren't for the fact that I had to get back to look after Amanda, and that I have some rights, I would have happily turned round and gone straight back to Italy.  No wonder that hardly any European HGV drivers (et al) want to go through this humiliation on a regular basis.
Just one little example: with my new blue Great Britain (sic) passport I had to go one way through the channels towards the security check.  Guess what?  Our channel wound its way in convoluted rounds to eventually be reintegrated with the simple straight channel for anyone else.....
Some apologies to those who disagree with my take on this, but Brexit has been a predictable disaster.  I am ashamed to be a British citizen.  I have been back ten days and Johnson makes a speech without mentioning supply difficulties (I couldn't get any fuel near here yesterday) and Theresa Coffey sings I've had the time of my life at the Conservative Party Conference closing disco.....  Universal Credit drops by £20 a week; fuel prices are at an all time high (with all the knock on effects that will have on food prices); heating one's home will be hundreds of pounds more this year; and Pandora has opened a box that spotlights the fact that the poor person who may falsify their benefit claim is such a minnow in the huge lake of tax evasion and surreptitious corruption that is this Tory world.
Fuck!  Nowhere and no one is perfect, and Italy's plethora of difficulties, governments, parties and disasters doesn't make for a good comparison, but all in all I would rather take my little one back there and see the sun go down with a glass of good red wine, than fret myself to death here in this so-called Bullingdon sovereignty where thousands of pigs can be eliminated because of 'supply problems' and food banks and supermarket shelves are running on empty.
Posted by Richard Gibbs at 19:49
Labels: Arcidosso, Arezzo, Brunelleschi, Bullingdon, Conservative party, David Lazzaretti, Eurostar, Florence, Iris Origo, Johnson, La Foce, Milan, Monte Amiata, Monte Labbro, Pandora, Paris, pigs, TGV, Vallombrosa
Location: Monte Labbro, 58053 Roccalbegna, Province of Grosseto, Italy