A Night on Wild Ken Hill

We have only been in Norfolk for a few weeks, but it's growing on me....  No offence, but it's like ivy is creeping up my legs, and mistletoe may have taken root in my armpits....  Although we are in a substantial village, our new home is only a 45 minute walk to the beach on the eastern shore of The Wash.  And the walk takes us through the forest of Wild Ken Hill, a romantic name if ever there was none....

The Wild Ken Hill estate is, to quote its website (https://wildkenhill.co.uk):
returning land to nature and farming sustainably in coastal west Norfolk. We use rewilding, regenerative farming, and traditional conservation practices side-by-side in a unique, innovative approach.....
I hope they won't mind me quoting like this from their website, but the statements are clear, and there is no point in me trying to paraphrase them.  They say that:
At Wild Ken Hill, our motivation is to deliver benefits for those around us. From providing free visits for our local schools to helping the UK Government meet its biodiversity and climate change goals, Wild Ken Hill seeks to show land management can work for everyone.
And they express the following details of their approach:

We’re letting nature take over on 25% of our site, with ponies, cattle, pigs and beavers managing the rich landscape for us

My daughter and I sign up for a guided tour, specifically entitled Nature by Night.  This is just one of a number of scheduled tours, led by members of the team, now possible since our partial release from lockdown.
Despite the title, we start in daylight. We are led by Lloyd, Conservation Leader and Ecologist.  Although Lloyd has only been in post since October, his knowledge of the site is impressive, as is his clear grasp of ecology and knowledge of the natural world.  Rather nicely, too, the group is only six, including him, so it is easy to hear explanations and to engage in conversation with him, and with others in the group.
Lloyd has with him a thermal imaging camera, a bat detector, and, though we don't need them yet, a set of torches.
As we start the tour, we are told of the changes the team have been making in agricultural techniques, much of which is explained in their Land Use Model publication which was published last year.  Among the points I learned on the tour were that that are using cover crops, and variable depth seed drilling; they have introduced various grazing animals (Tamworth pigs,  Red Poll cattle and Exmoor ponies) all of which have, like the native deer and other wildlife, free range across the site; there is also an enclosed area where four beavers are working on controlling the natural flow of floodwater; the team have stopped cultivating unproductive areas, and leave extensive margins around the fields that they are still actively cultivating.  They are not using insecticides and are aiming to be free of fertilisers in a year or two. 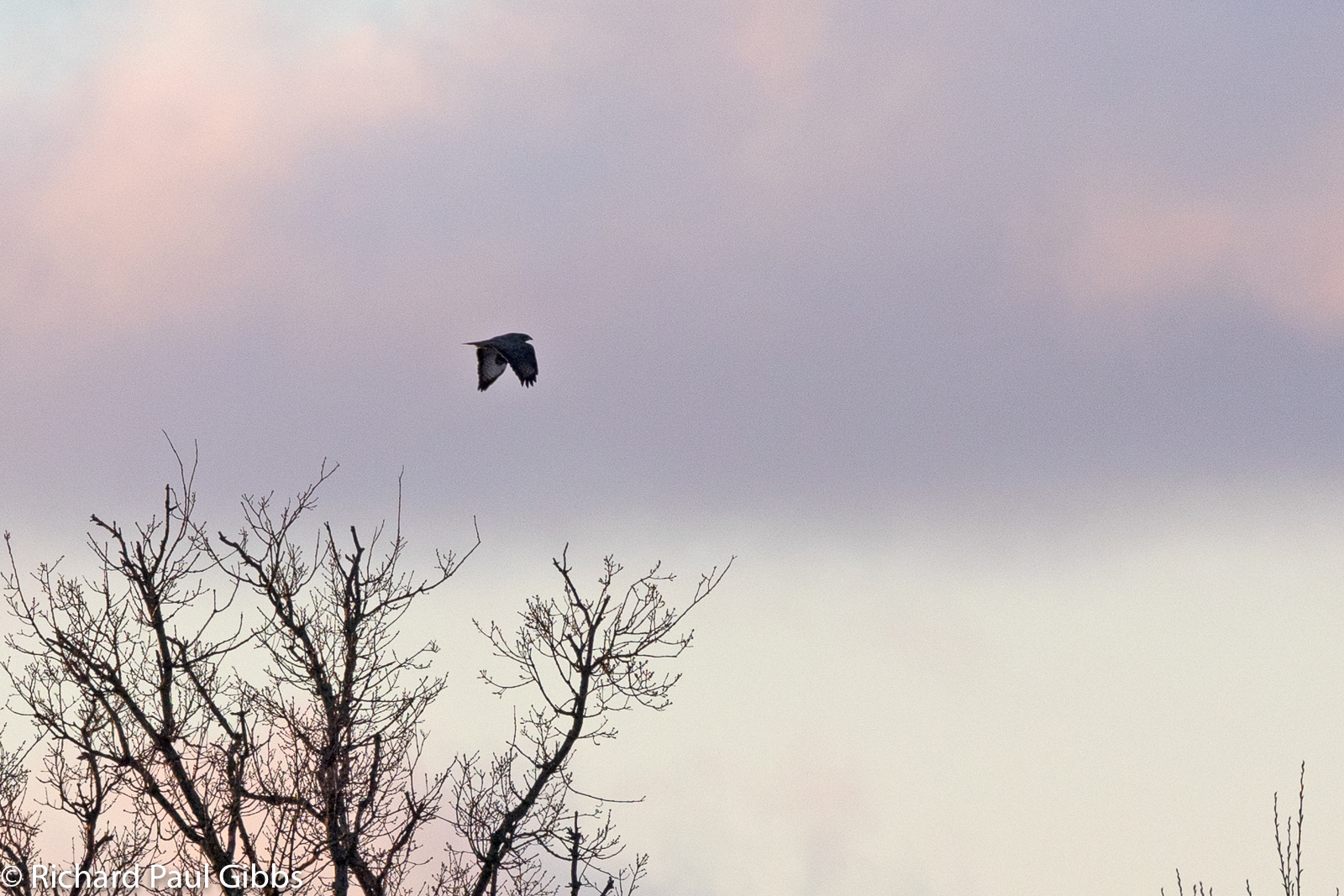 The statistics are impressive: Wild Ken Hill is a four thousand acre family owned estate and it stretches from the sea through coastal scrub, freshwater marshes, heathland, wood pasture to nature-rich farmland.  So far, 2,500 species have been recorded on the estate.

The first creatures we see are brown Hares, of which there are too many to count, but then overhead a Sparrow-hawk flap, flap, glides into the dusk. 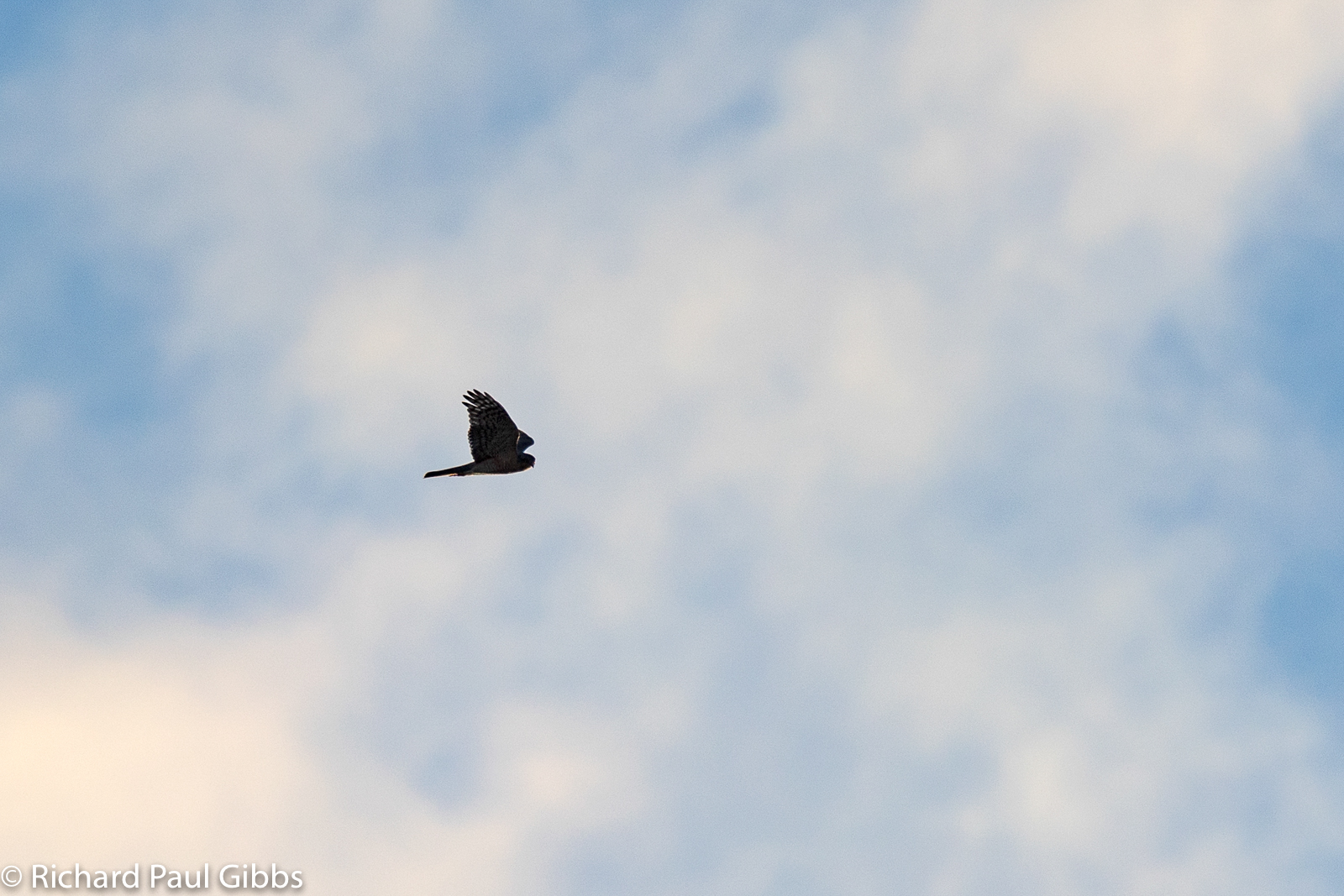 We see two pigs sauntering along the edge of a field. 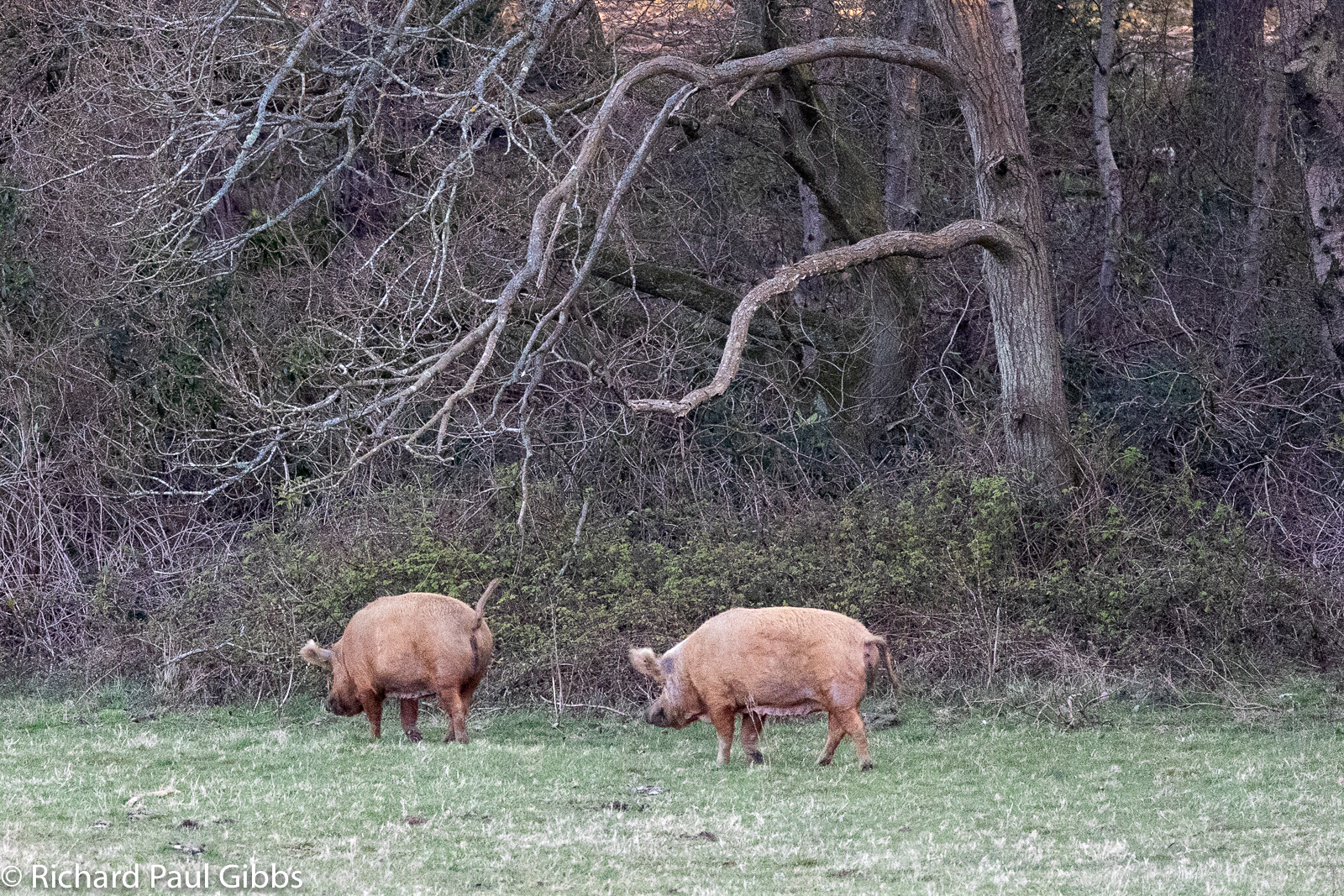 The Red Poll cattle are lurking in the gathering gloom. 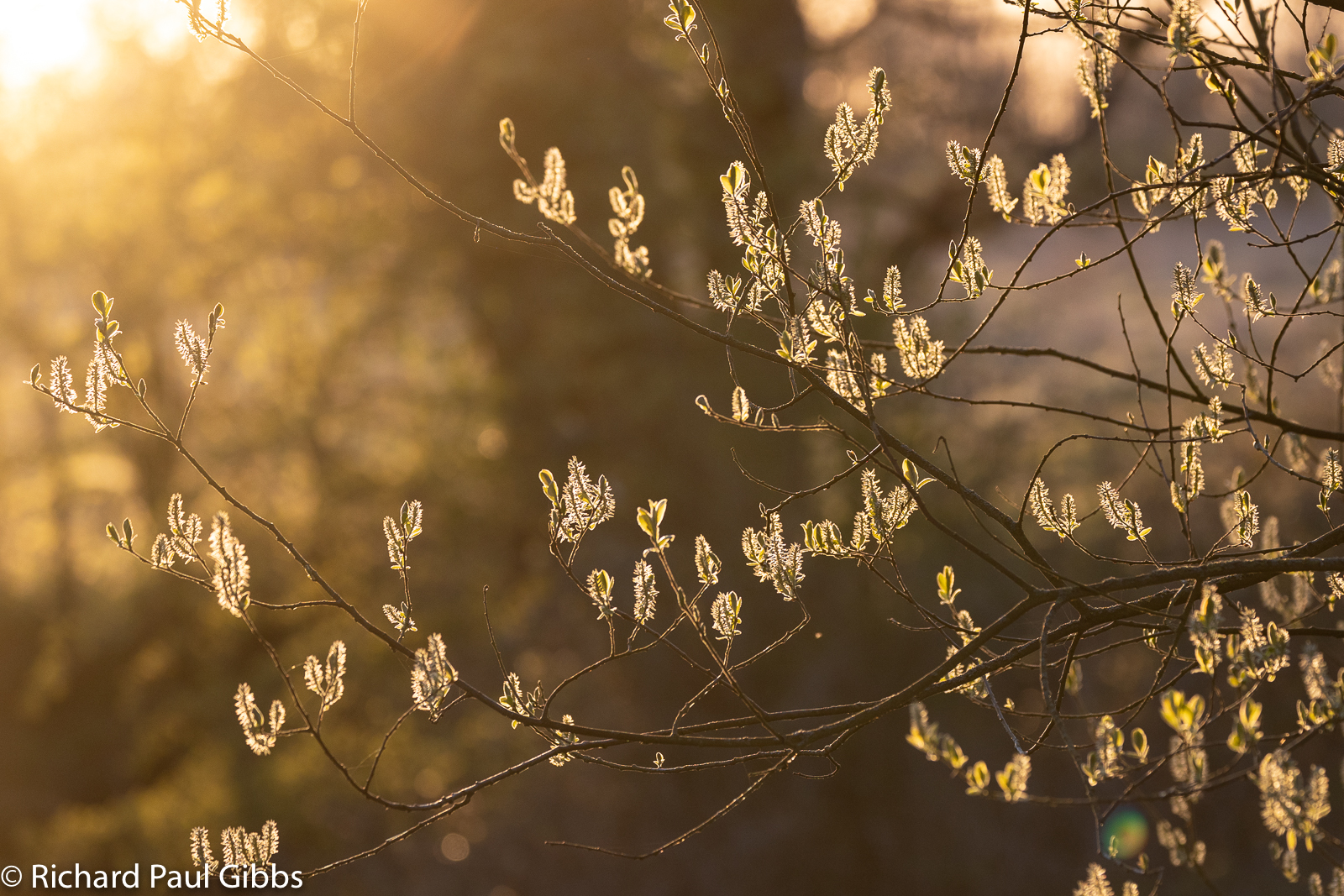 The sun begins to slip through the hedge, while a Grey Heron slides across the clouds like some stealth bomber.

In the shallows before the flood defence a myriad of Curlew religiously stand toward the north. 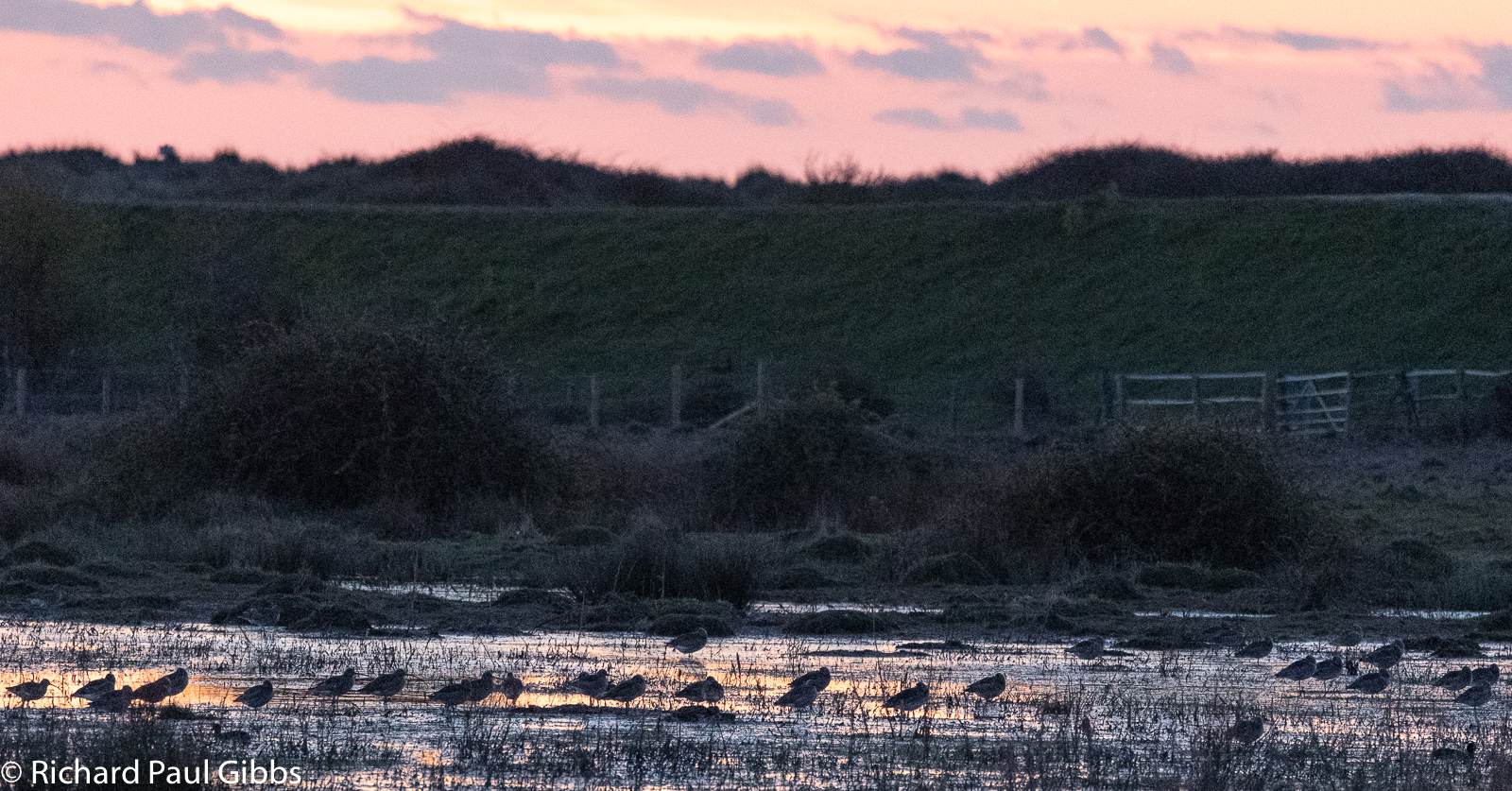 Around a scarecrow tree I see three Marsh Harriers unsure as to who should have the high perch. 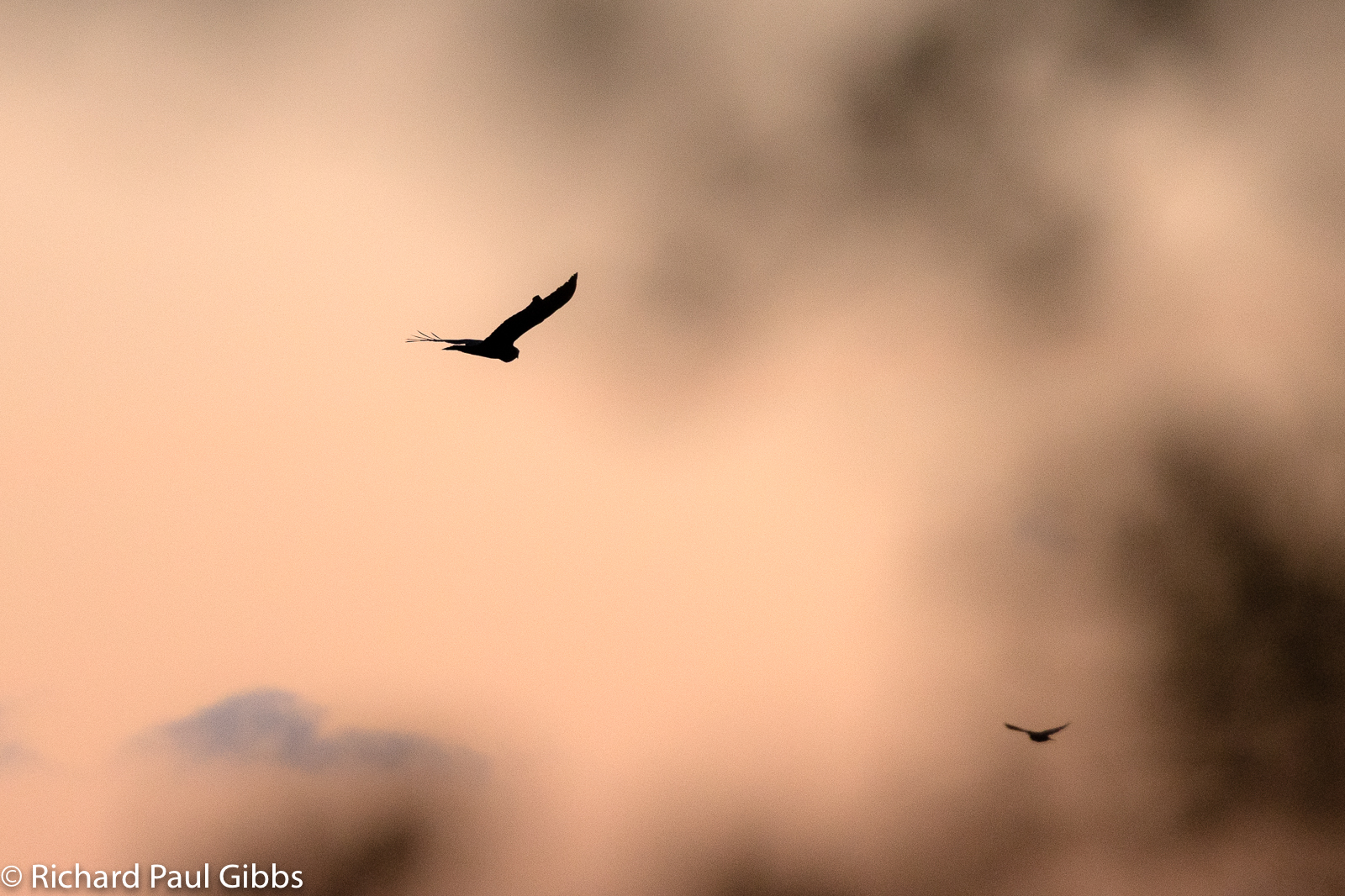 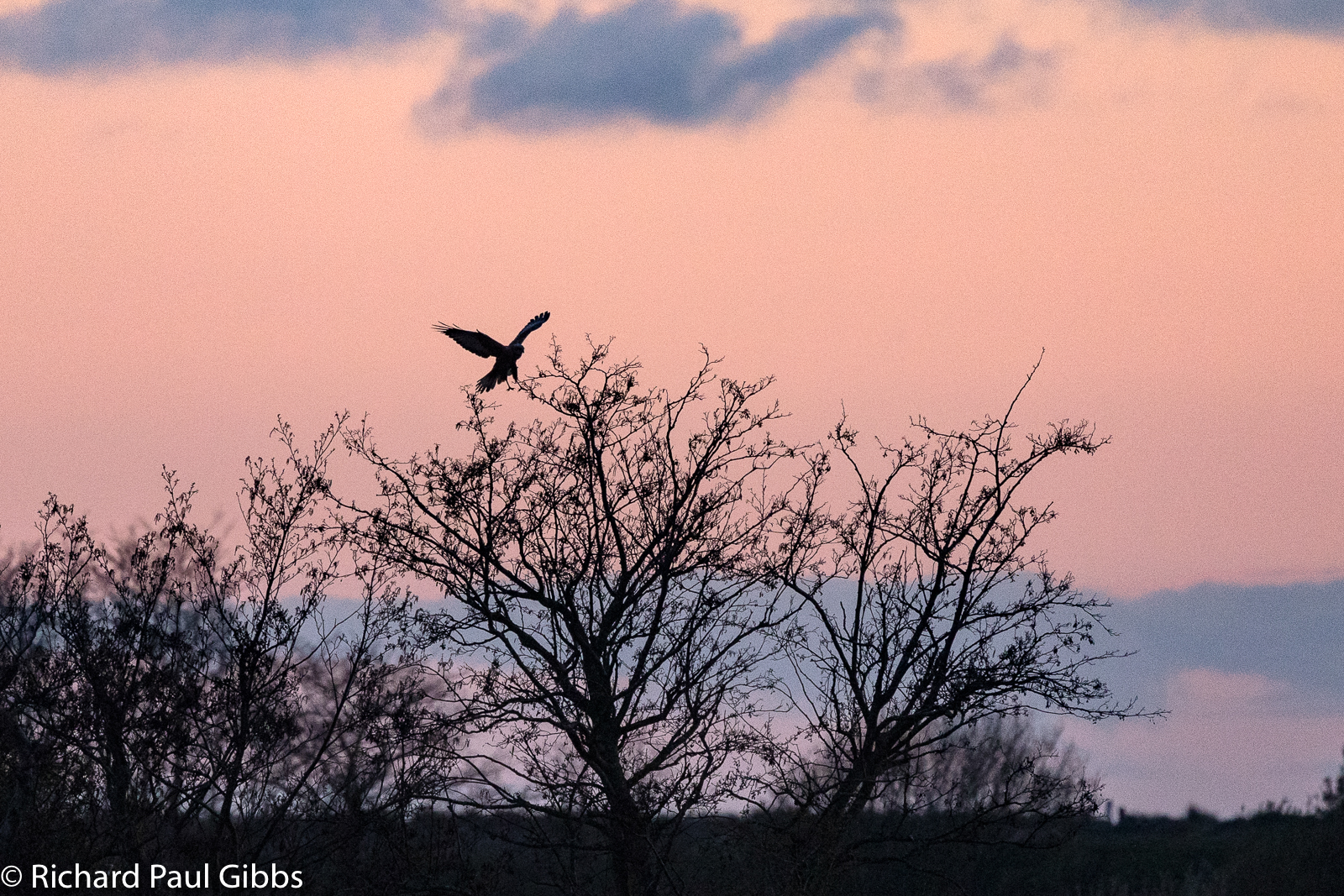 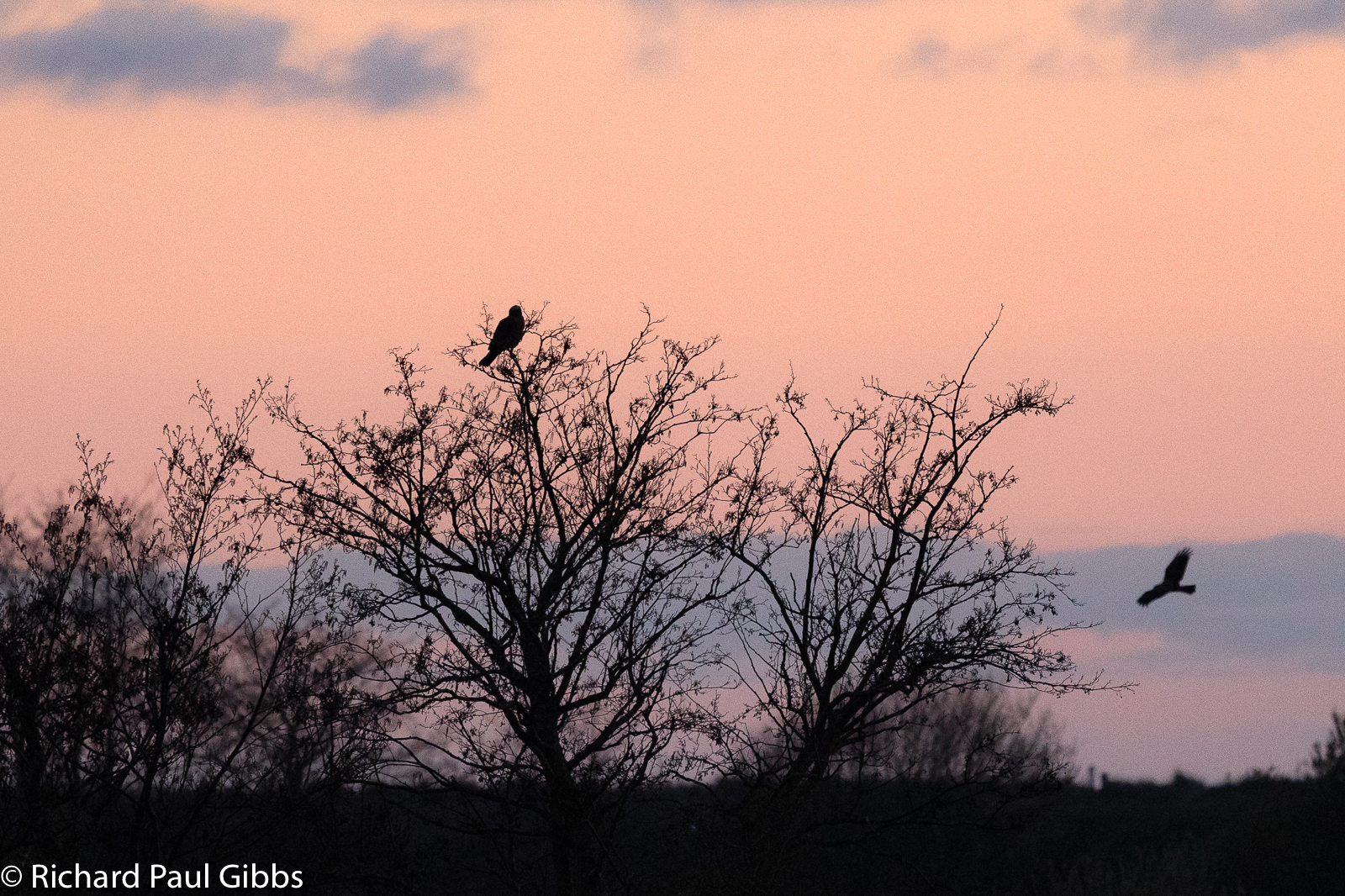 Back toward the forest two young female fallow deer ignore the hares that career pass them. 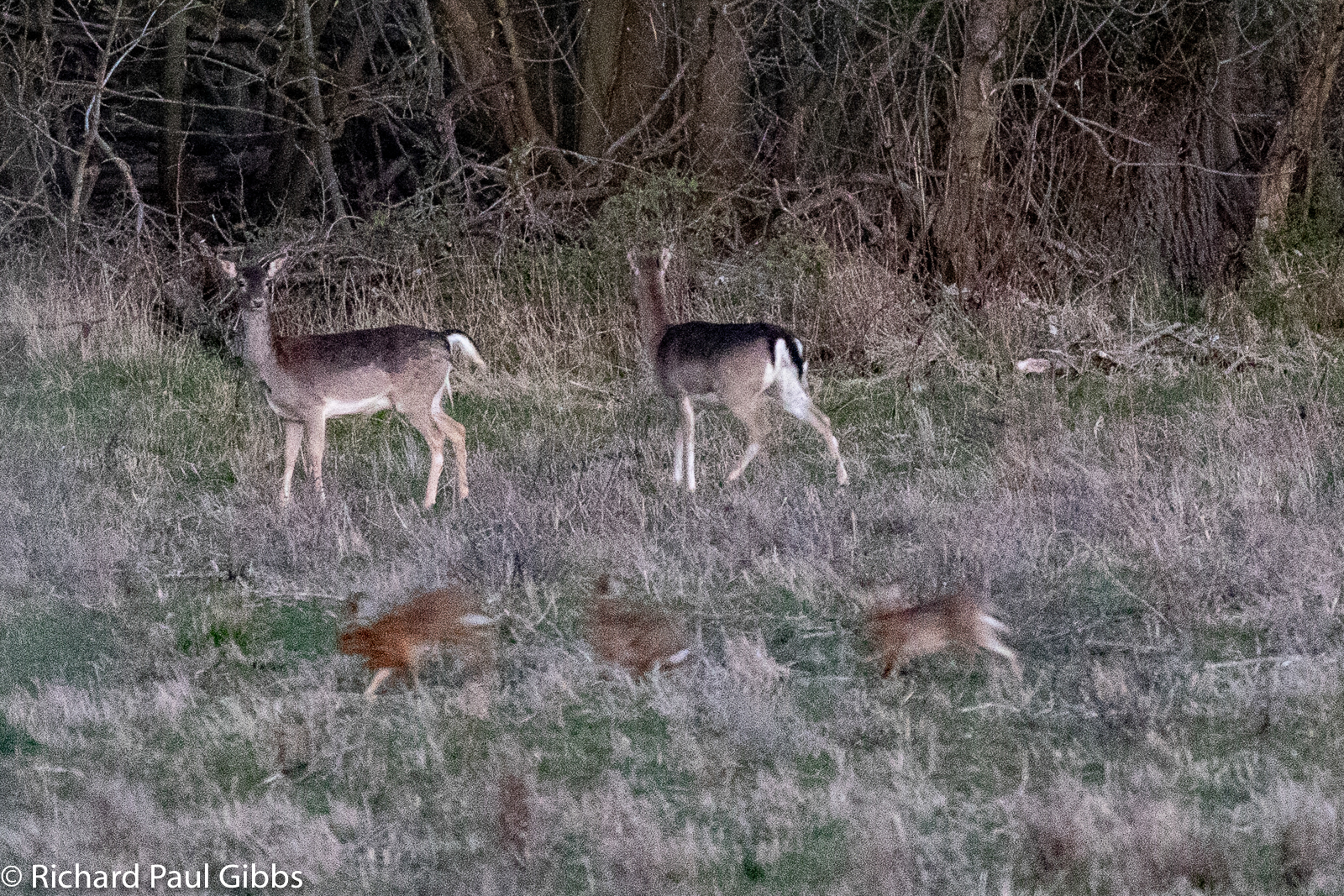 The moon, a sliver of its sometime self, poses with Venus, and the darkness falls. 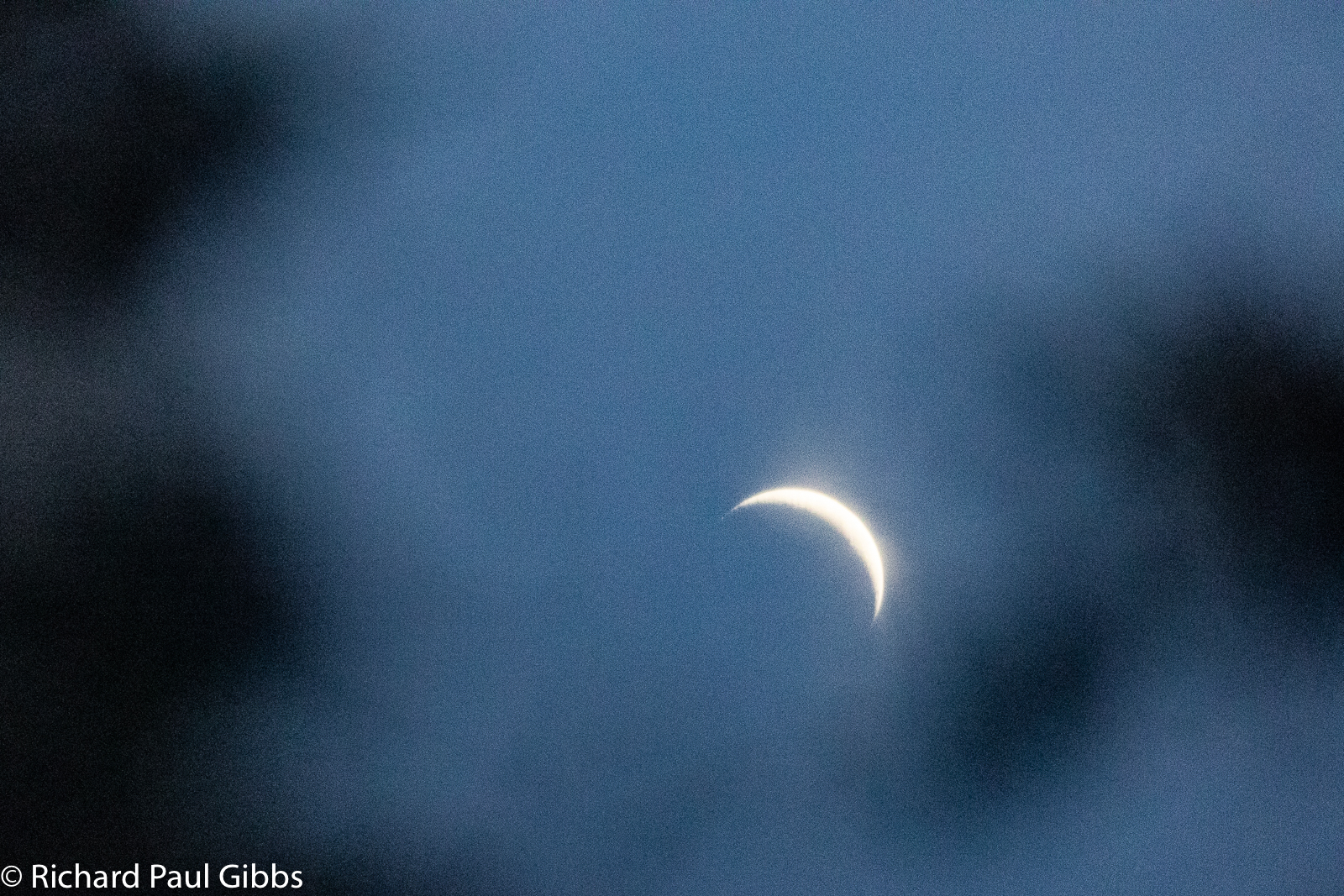 We stumble into a field, discovering what Lloyd deems the highlight of the night, a Woodcock roding, circling above our heads in a display flight that seems to take five or ten minutes - so must be something like a mile in circumference.  It is now too dark to catch a photo, but its quiet, rapid wingbeats brush the air like the insistent beat of a fan. 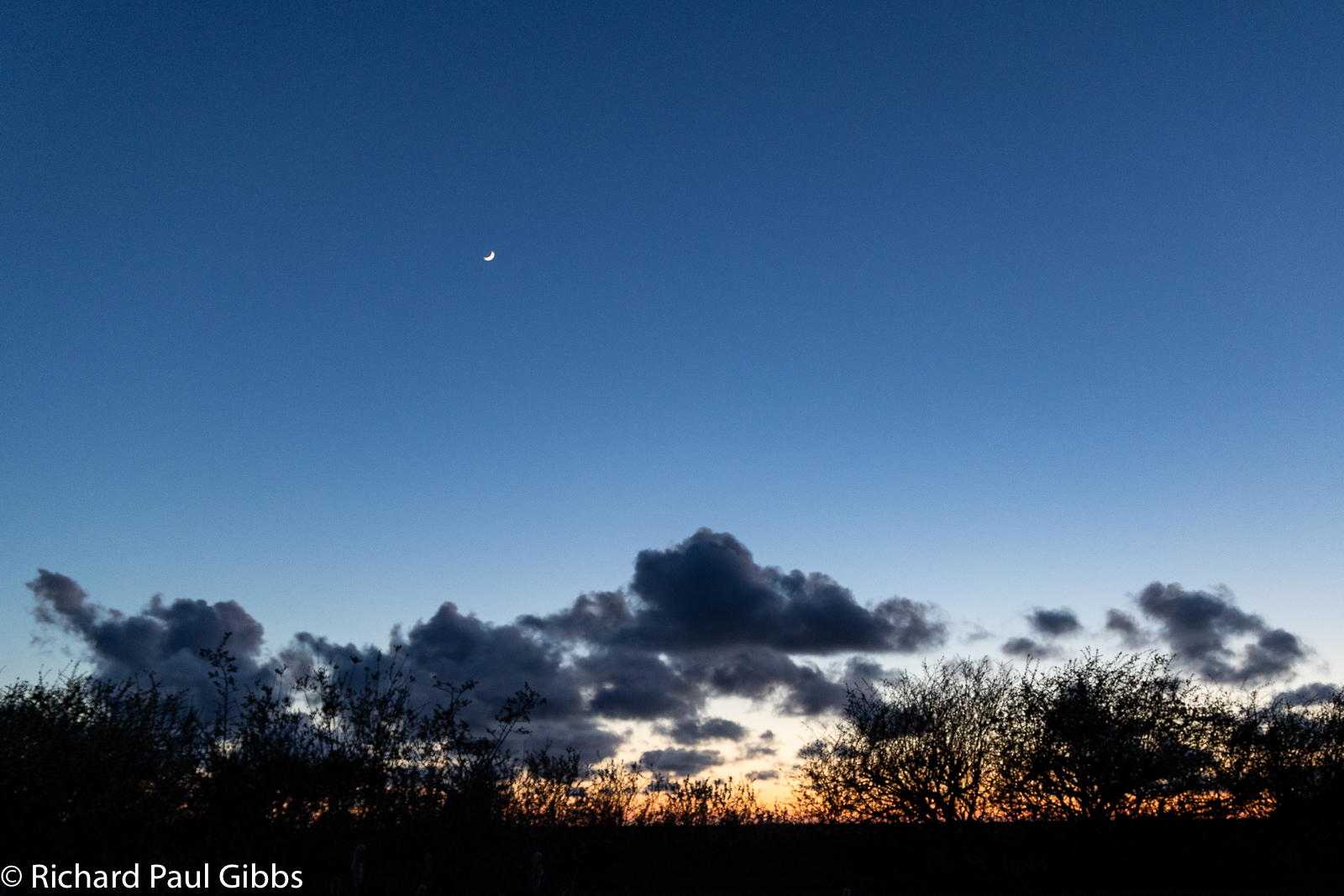 Then it is dark.  Our last stop is a powerful moth trap.  On the way, Lloyd picks up a pipistrelle on his monitor, but we don't see its radar.  We hear a Tawny Owl parodying itself, but don't see its shadow.  Woodpigeons clatter off their roosts as we plunder through the brush, but the rest, as they say, is silence..... 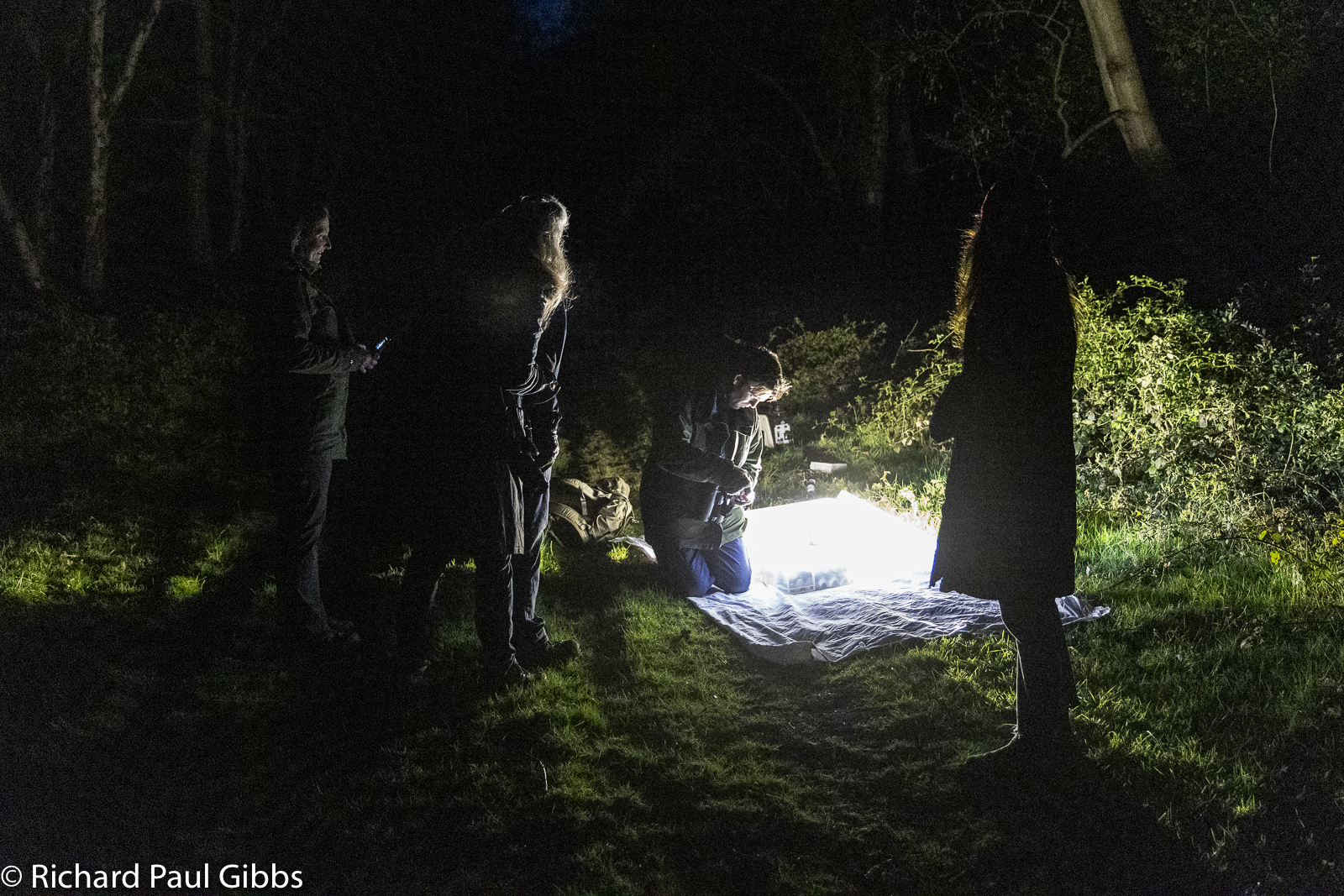 The moth trap has a number of hapless Hebrew Characters and other moths, huddled in egg boxes, and Lloyd effortlessly identifies each.
By now I am flagging.  It is a wonderful world, but my batteries are low and we need to curl up in a nest somewhere.
It has been a stimulating walk into the night, and I very much look forward to my next encounter with the estate, which is due to be in search of the dawn chorus in a week or so's time.
We were lucky, I guess, to have good weather and a spectacular sunset, but all in all it's not the weather that makes this a special place.  It is down to the management and the cultivation of a natural environment.  There is a paradox in that, but let's not get too exercised by it.
It is an exciting enterprise, and I thoroughly applaud it.  Thank you for having me....
Quietly..... 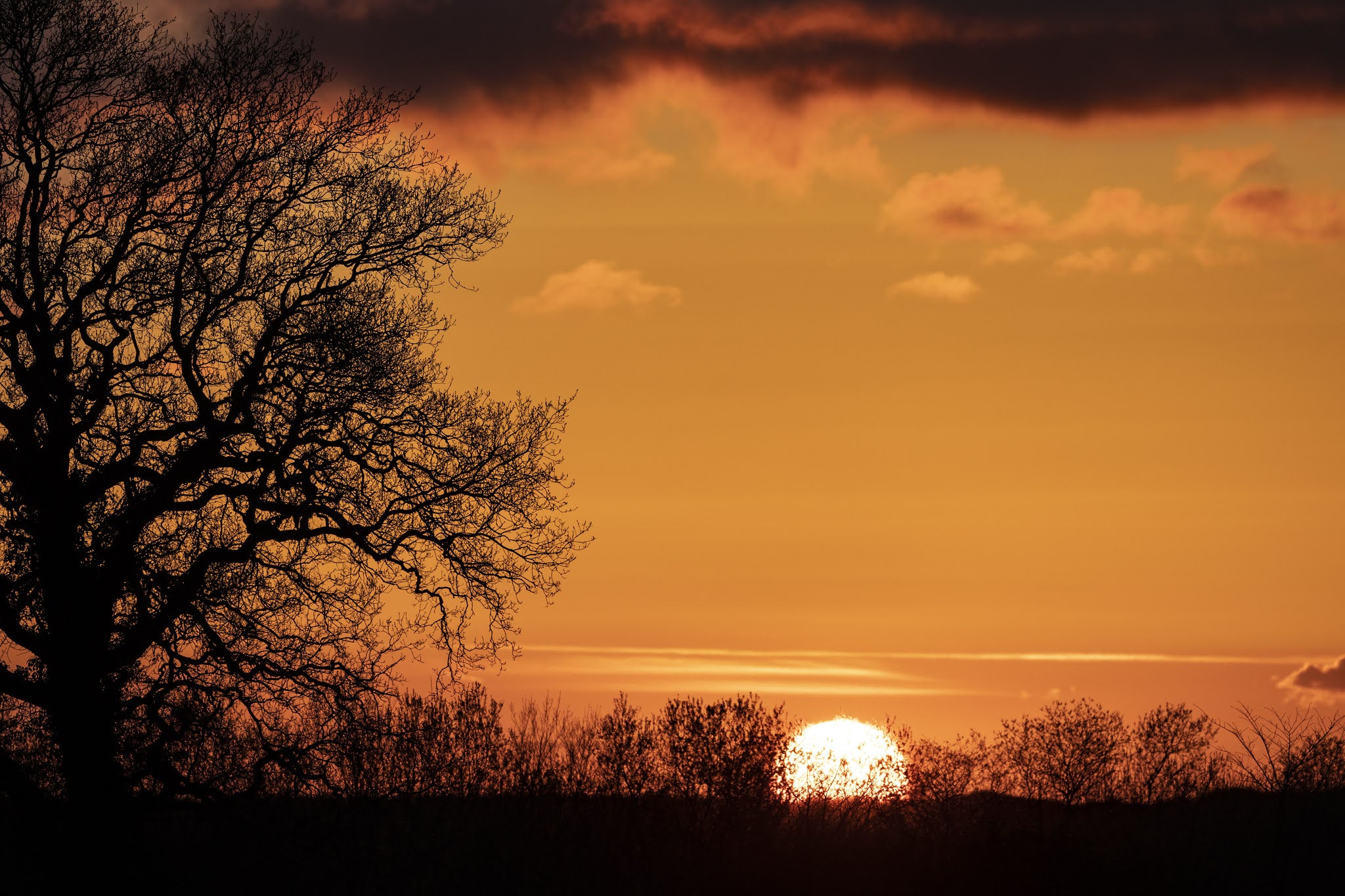