Down where the spirit meets the bone.... 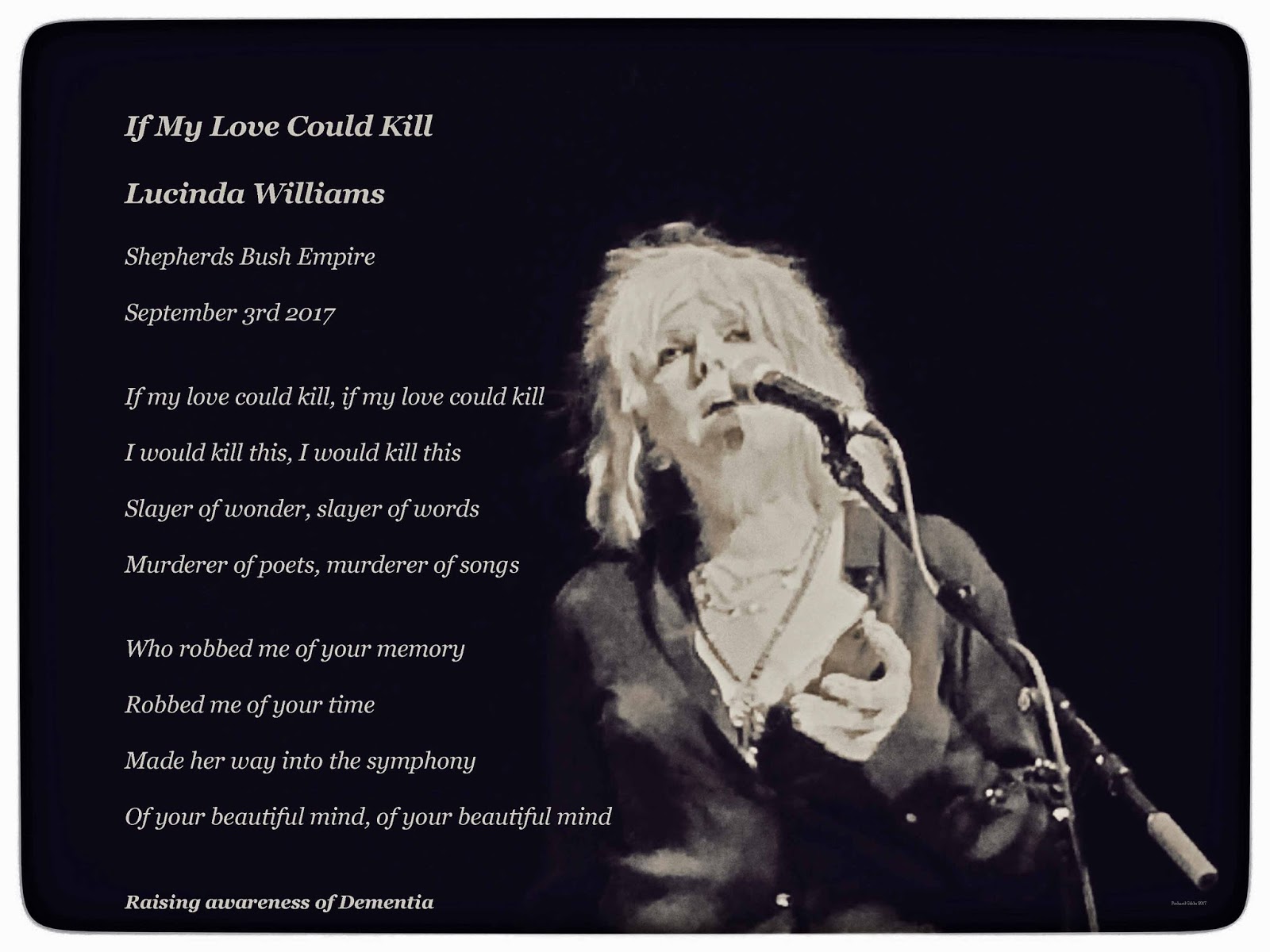 Lucinda Williams is a much lauded star of , though her recent tour of the only improved on Elvis Presley by three dates (one of which was Bexhill-on-Sea). Despite that I found myself at the front barrier of the Shepherds Bush Empire stalls on Sunday September 3rd armed with my iPhone and an enthusiasm for her songs, eagerly recognising tracks which are now embedded in a certain American psyche – though not, perhaps, that of the current presidency…. 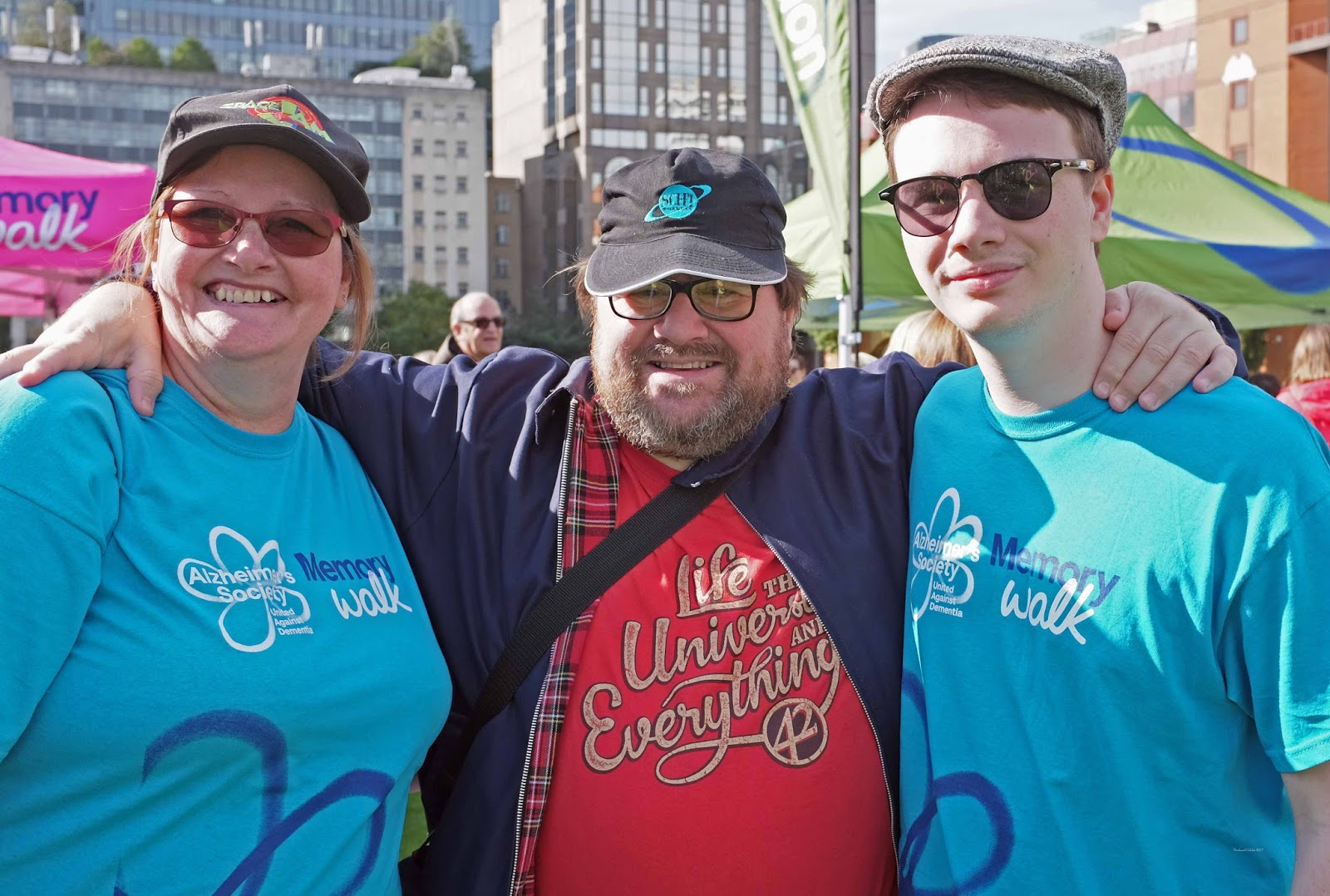 Lucinda was born in 1953, two years after her parents married.  Afflicted, but not destroyed, by her father’s spina bifida, she rose gradually through the ranks of would-be singer/songwriters to become award winning and celebrated, with the continuing support, on stage and off, of her father, the poet and academic, Miller Williams.

We have memorized ,
how it was born and who we have been and where.
In ceremonies and silence we say the words,
telling the stories, singing the old songs.
We like the places they take us. Mostly we do……

If we can truly remember, they will not forget.

Tall and thin, Mr. Williams was also economical of speech, but he loved to tell stories. He was admired in literary circles for his direct, plain-spoken style.

According to his obituary in the New York Times, he was a workhorse, publishing 37 books of poetry and prose, both of his own and of others in translation.  He taught at the of in for more than three decades and was the founding director of the . His home there was a salon for writers and others, with a guest bedroom that hosted both the hard-bitten poet Charles Bukowski and Jimmy Carter.

The cause was complications of Alzheimer’s disease.

Which led to Lucinda’s poignant song, If My Love Could Kill which she performs at Shepherds Bush, noting that it was for her father. 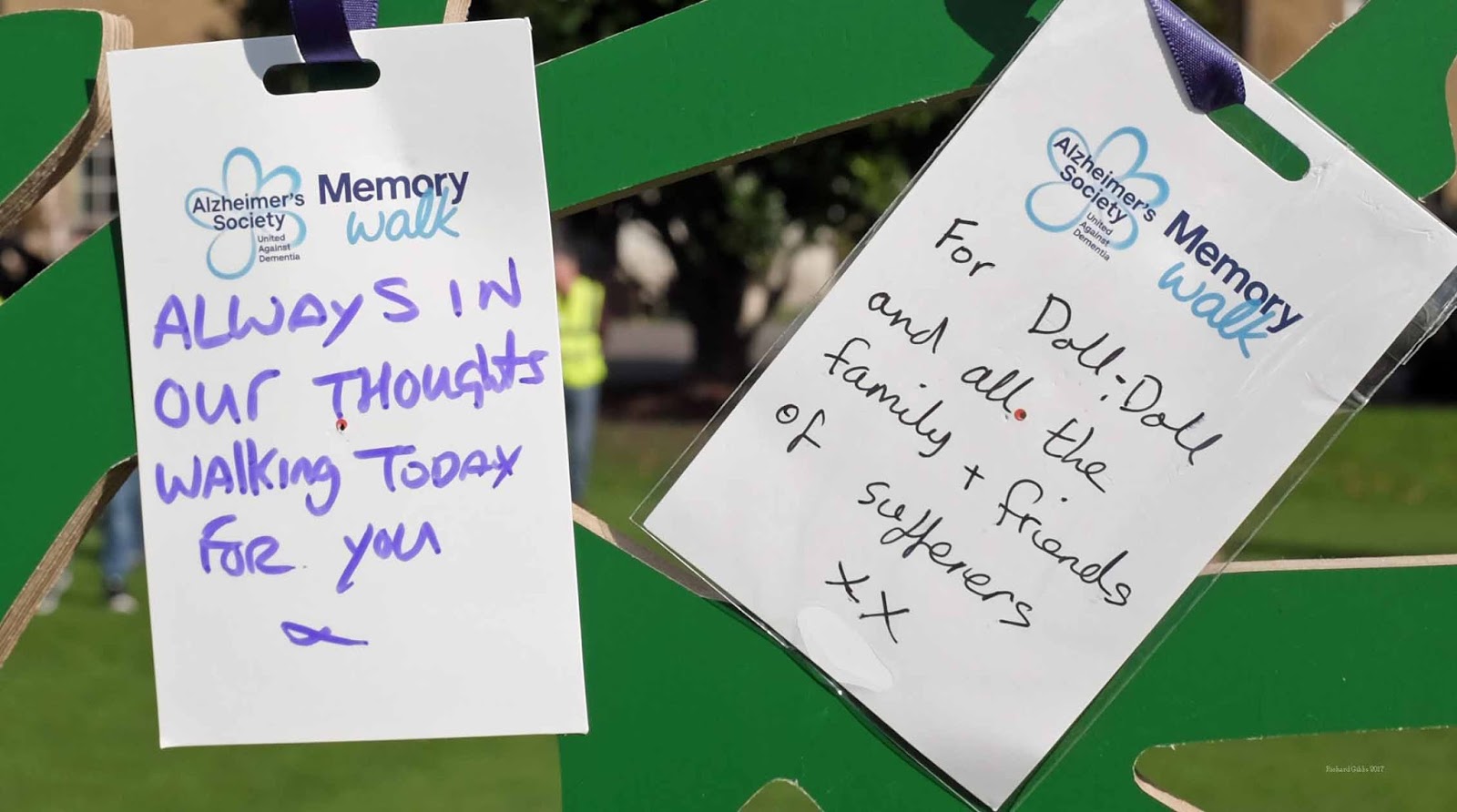 Not everyone realises that Alzheimer’s disease is a death sentence.  And, quite understandably, many people are unaware of the various other forms of dementia, all of which lead the same way, even though, as a representative of the Alzheimer’s Society said to me the other day: we have a saying; if you meet one person with dementia, you have met one person with dementia…. 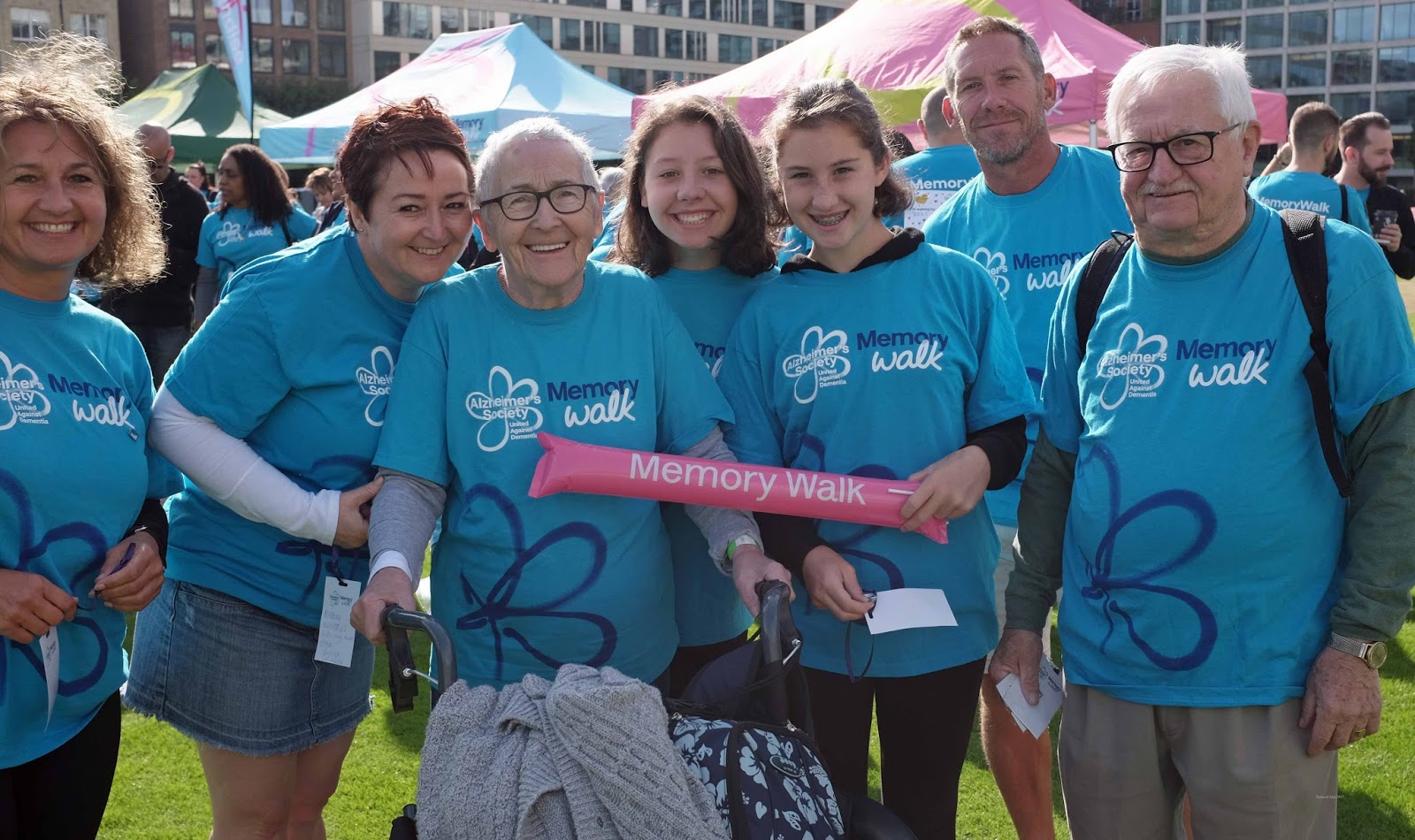 Today, one week later, my daughter Hannah and I help marshal 4,000 people walk 9.5 kilometres through raising money for research into and awareness of Dementia. 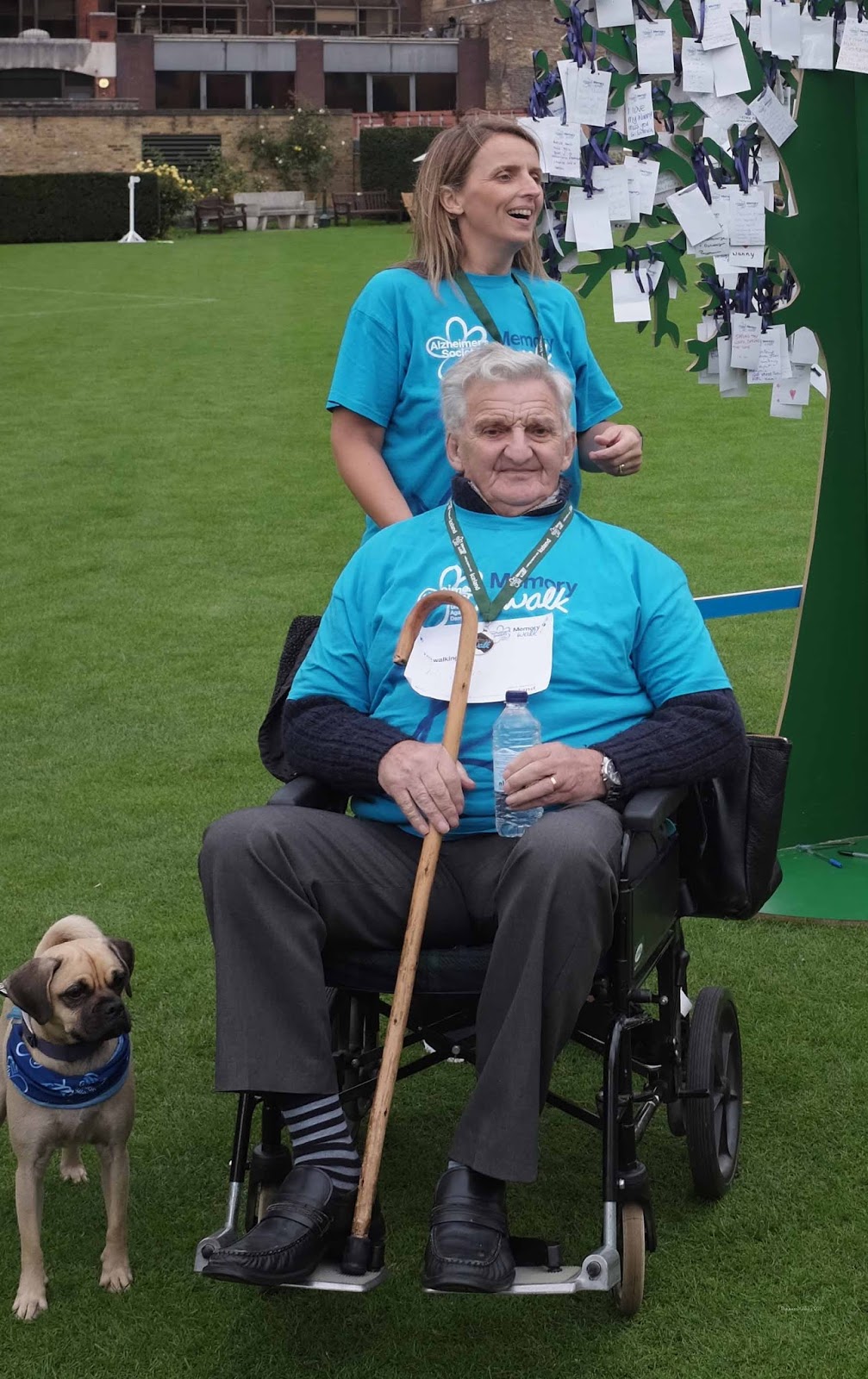 This Memory Walk is a moving event, as almost everyone is walking in memory of a loved one who has suffered and died from Alzheimer’s disease, or another variety of dementia, such as my wife Amanda’s Frontotemporal  Semantic Dementia. 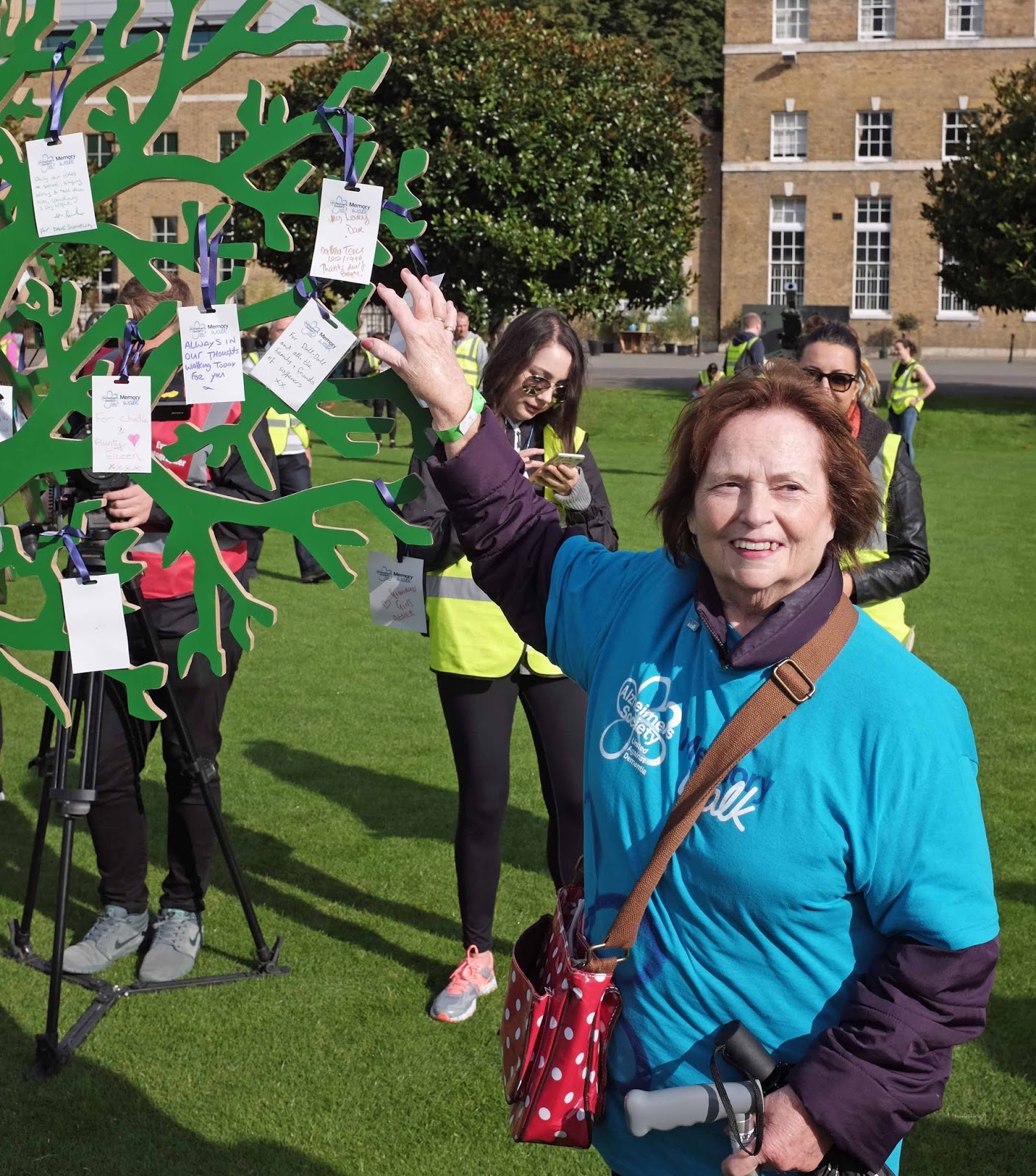 Memory Walk is a sponsored walk for all ages and abilities to unite together to raise money to defeat dementia. The walks are spread across , and and each walk will take on a different route through either a city, woodlands or a park; as of today there are still 26 walks to take place this year.  In there 13 organised walks still to happen. 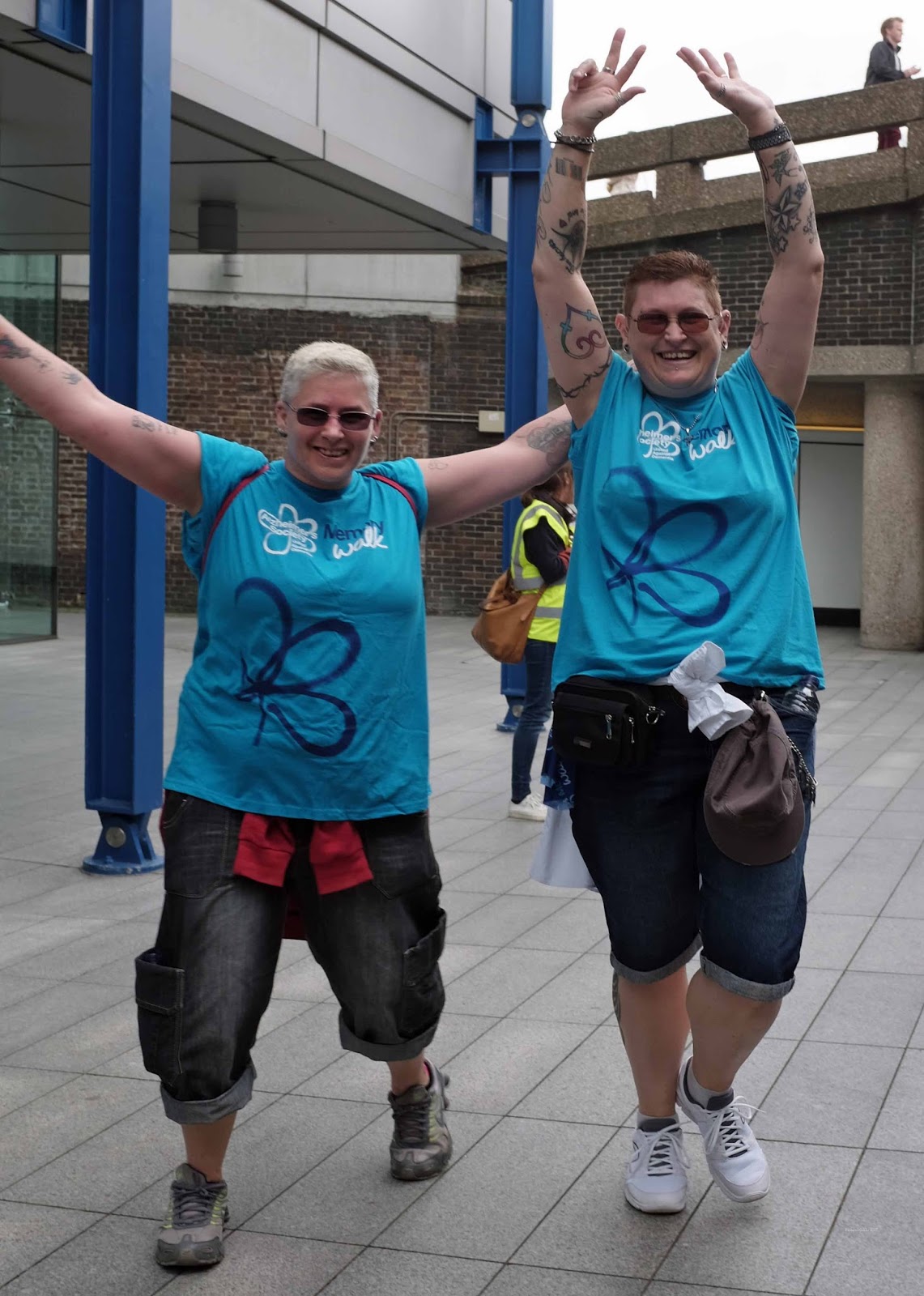 This year over 110,000 people will walk united, against dementia. The aim is to raise over £9 million.


We meet in early morning sunshine at the Honourable Artillery Company, just off Finsbury Pavement near Moorgate station in east .  The volunteers are briefed and we set off for our Marshal Points as the first walkers arrive wearing blue tee shirts, or, in some cases, custom-printed tops. 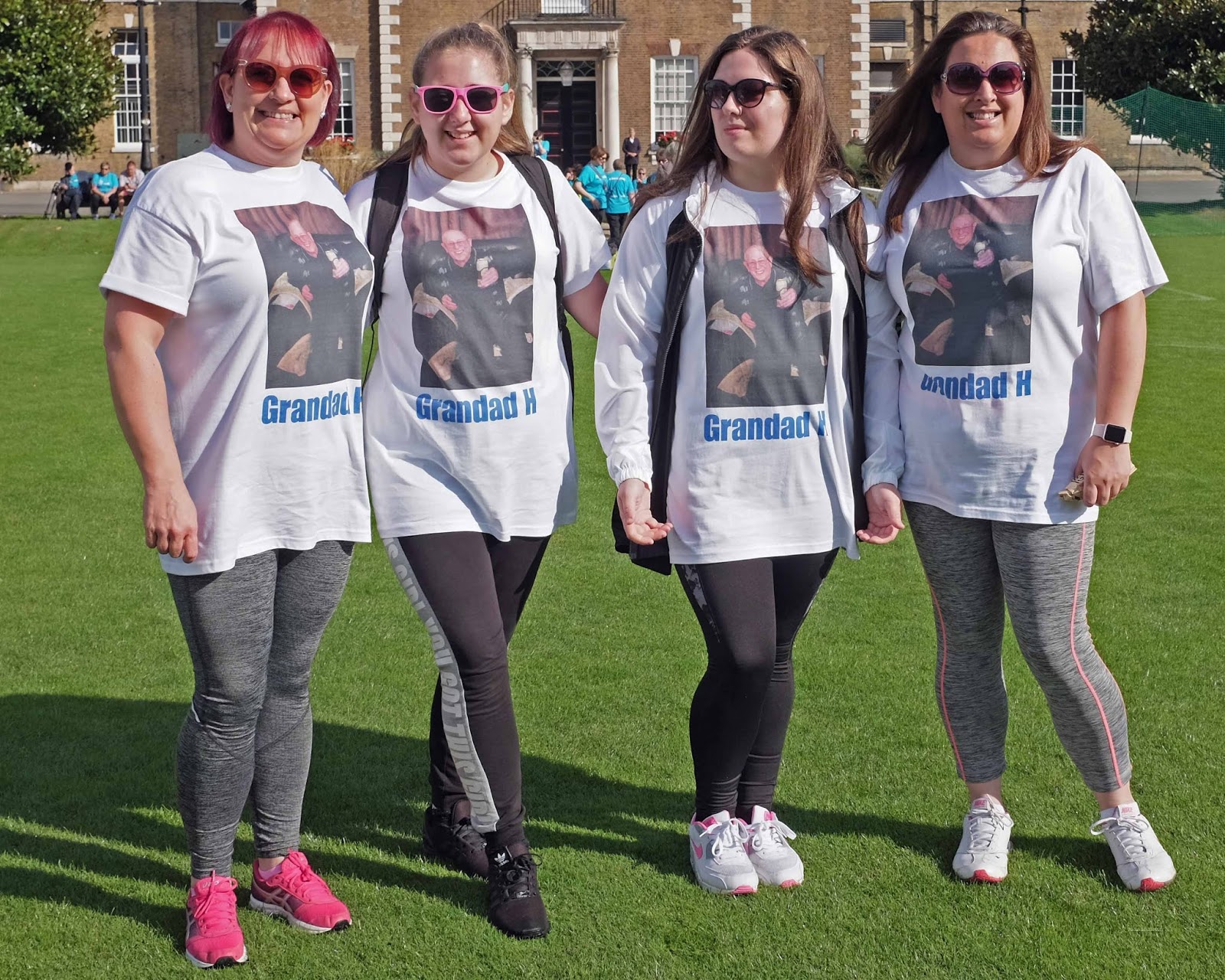 Despite the awfulness of this stealthy, miserable condition, the mood here is upbeat, and families, friends, and individuals mill around exchanging stories, writing cards for the Memory Tree, or just enjoying the event. 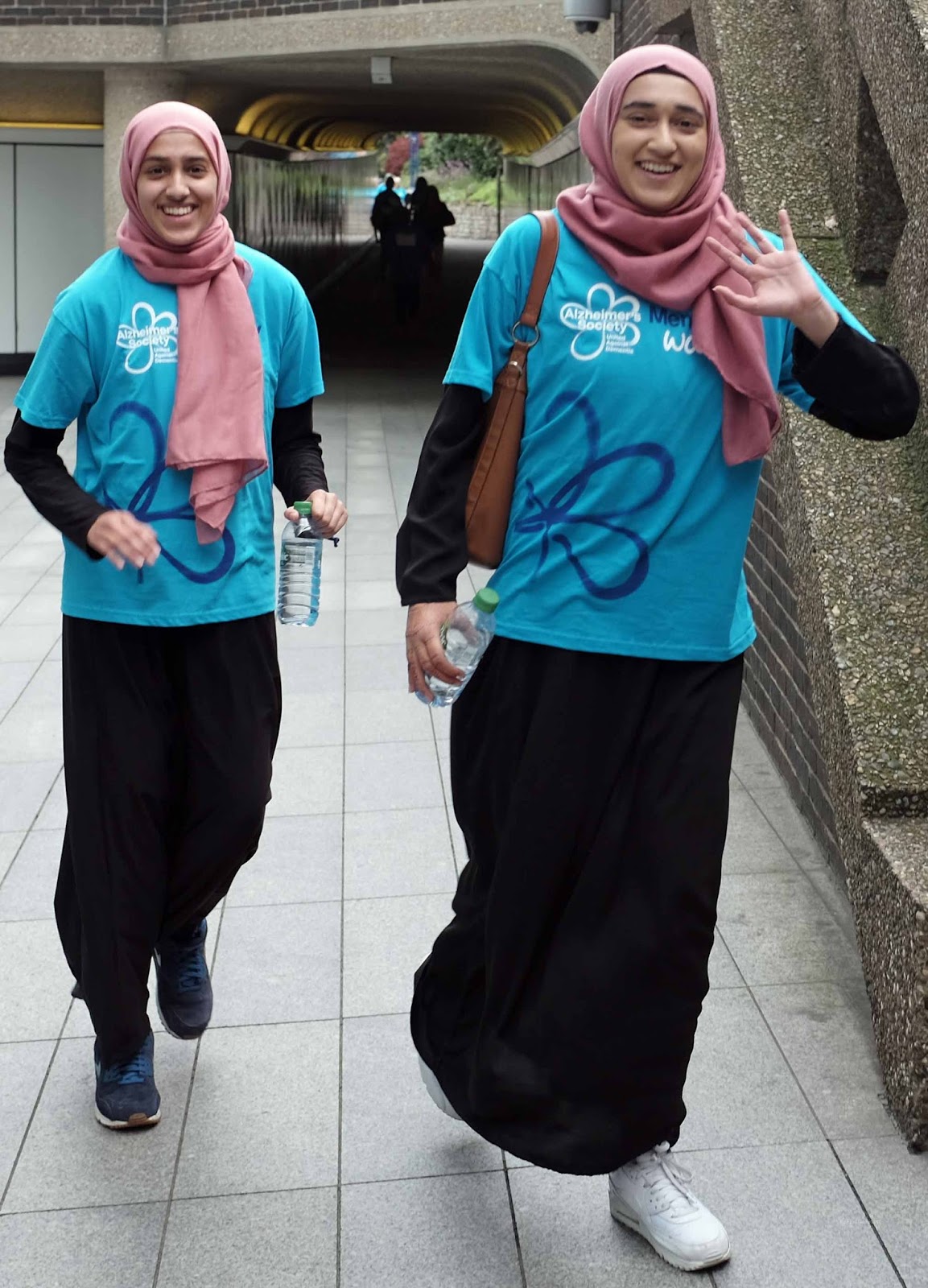 Hannah and I are stationed just near the approach to , close by the , around the half way mark.  Over the best part of a couple of hours thousands of people pass by: people of all ages; people of different ethnic or religious backgrounds; people with red hats..... 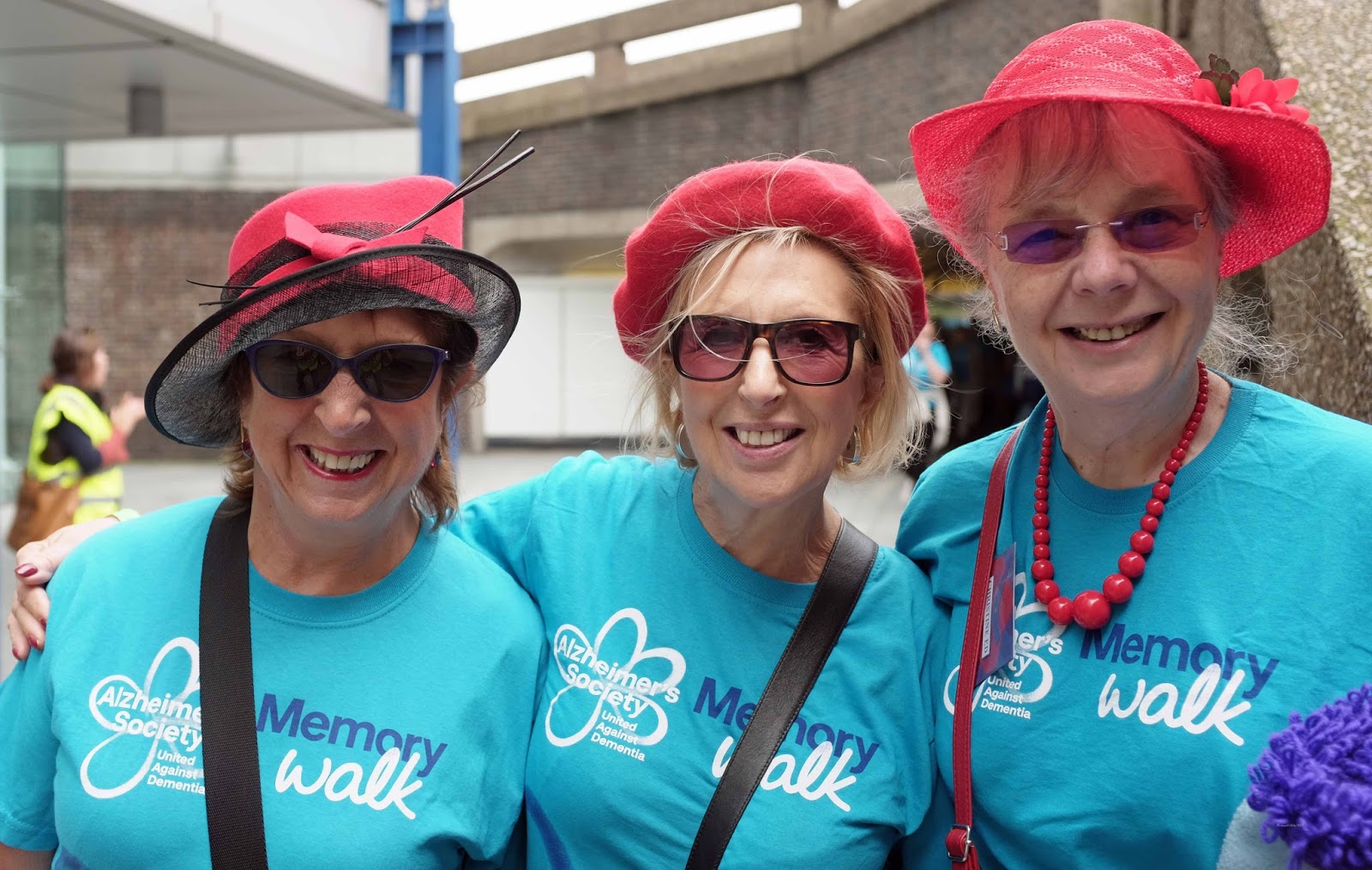 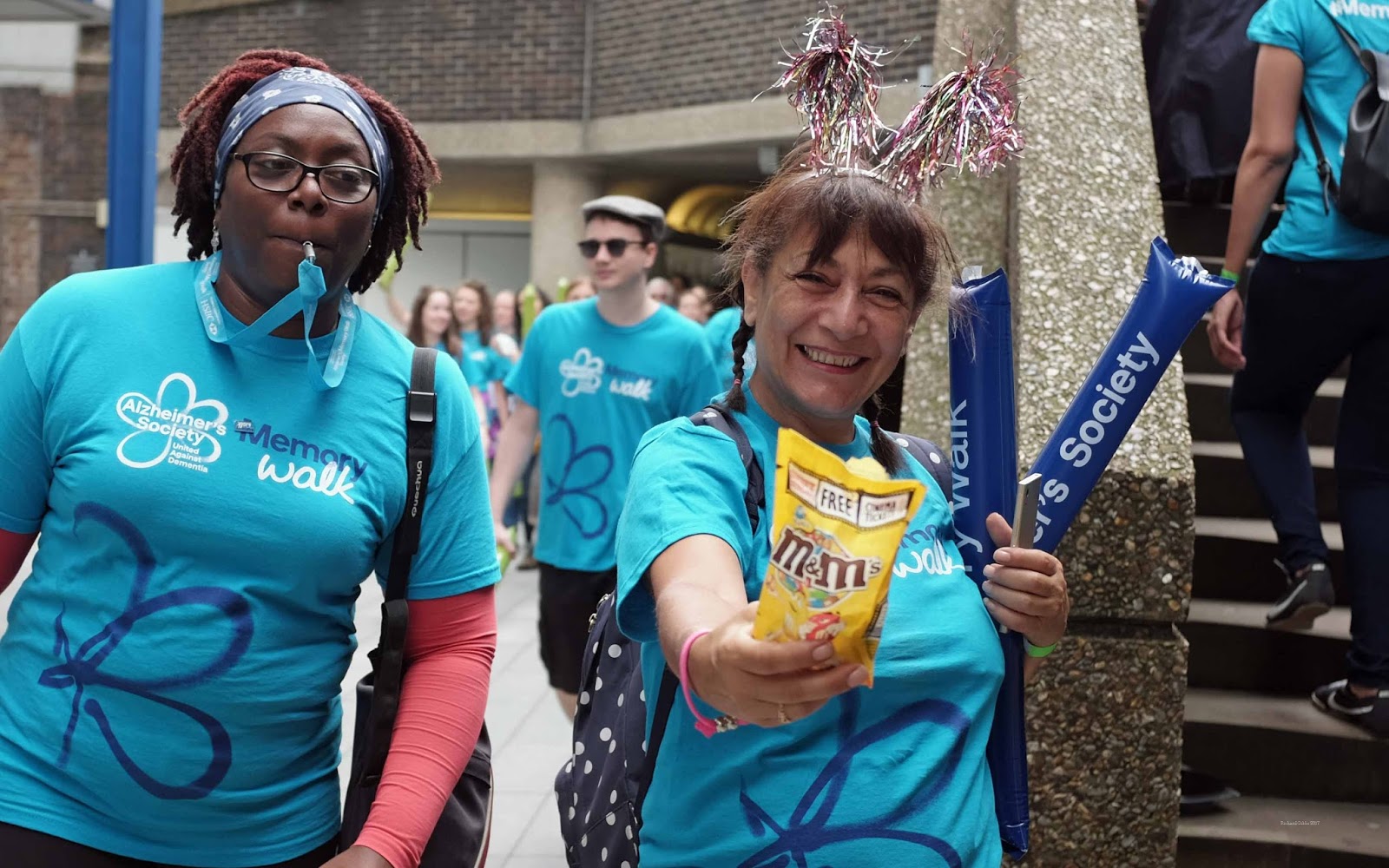 Almost everyone displays a card, showing a message or a name: walking for Nanny Bobby; Grandad H; Daddy – Donovan Benjamin..... 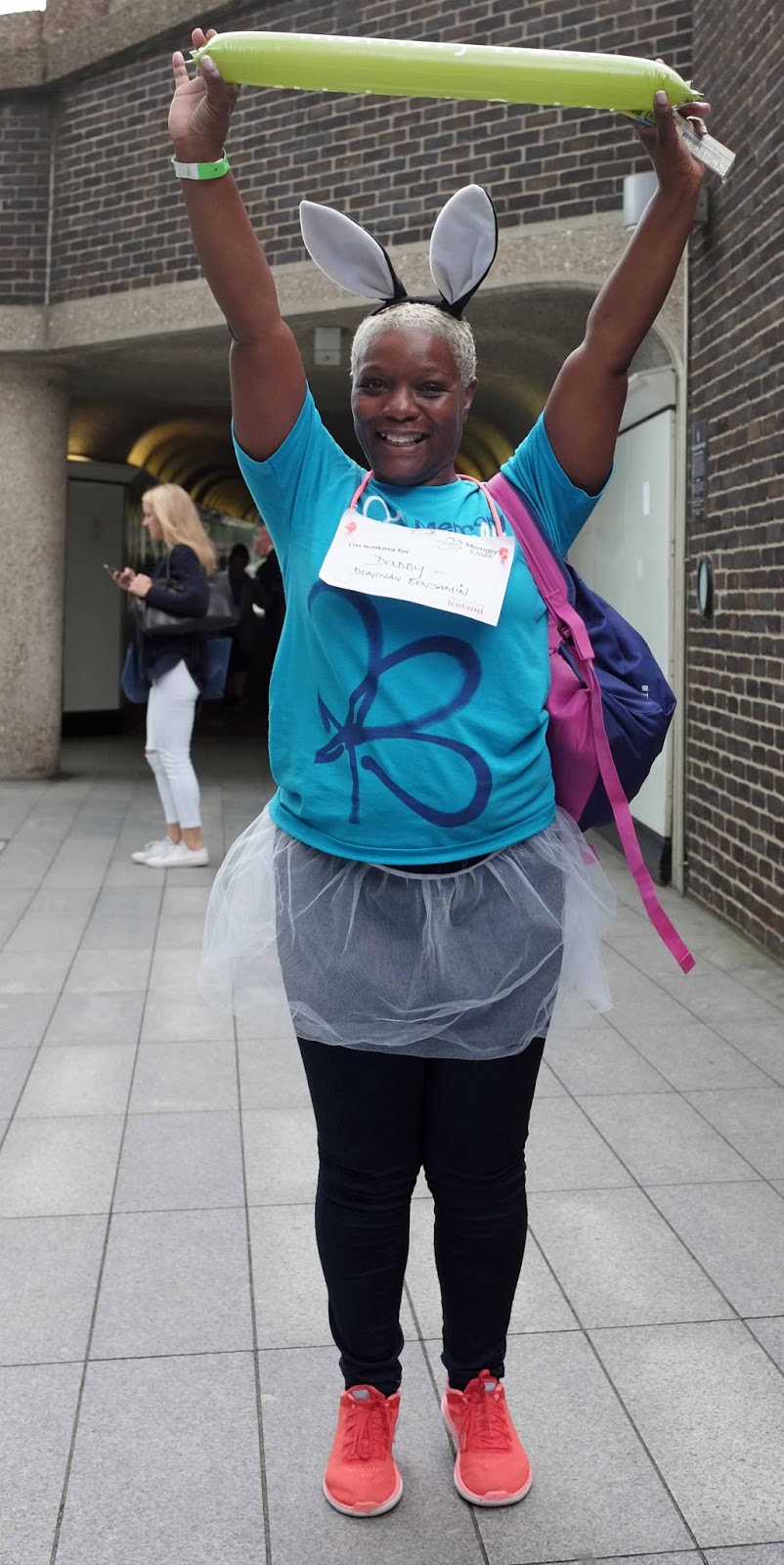 This gentleman is walking for Gwendoline Joyce.  She was his wife of 59 years.  She died in June.  Towards the end she weighed 40 kilograms, and couldn’t eat, as she couldn’t open her teeth. 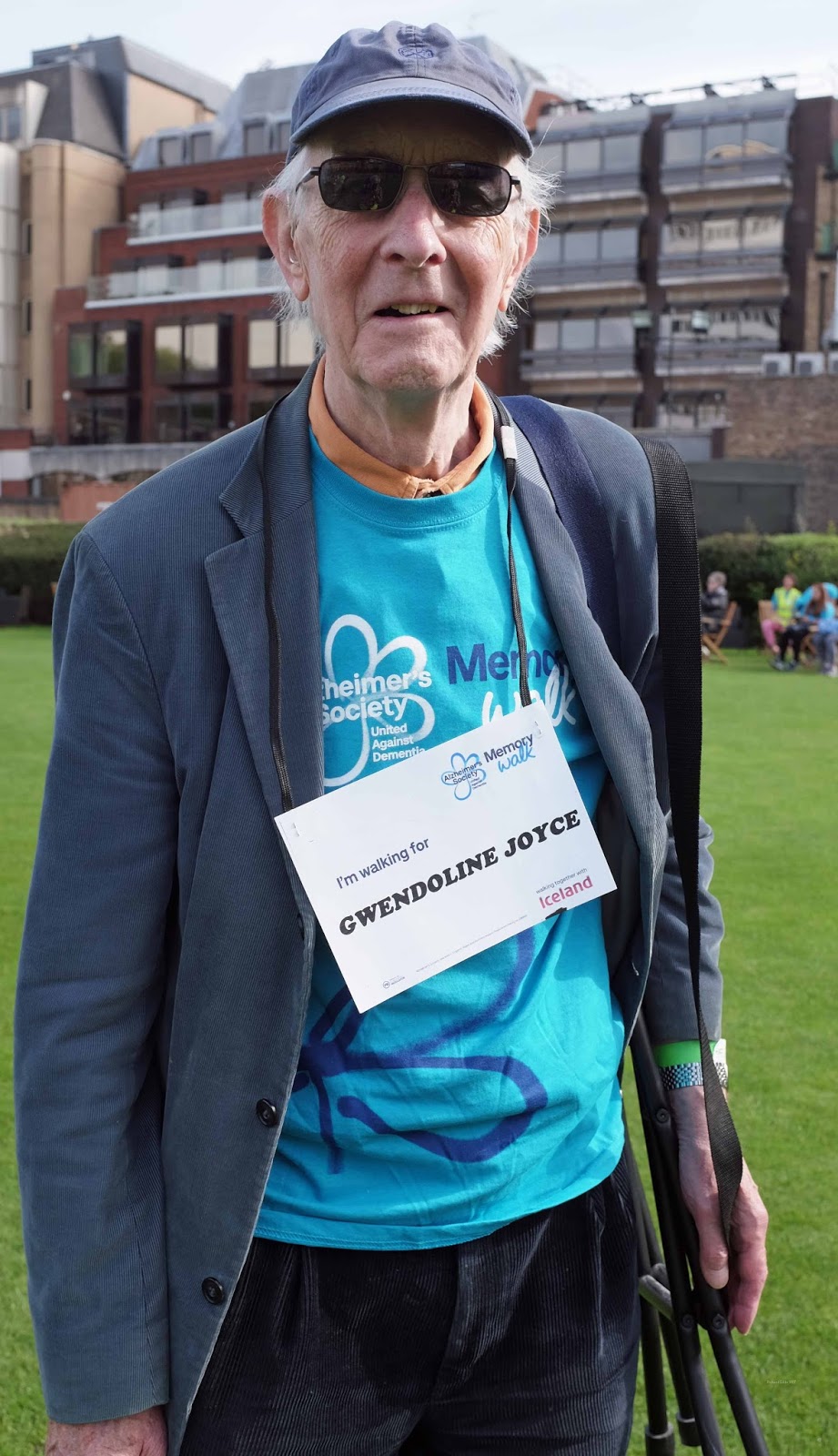 However, despite.....  it is a marvellous day.  There is so much love about.  The fund-raising is brilliant, but the real power is in the togetherness of people who have suffered loss and pain, but who survive and share. 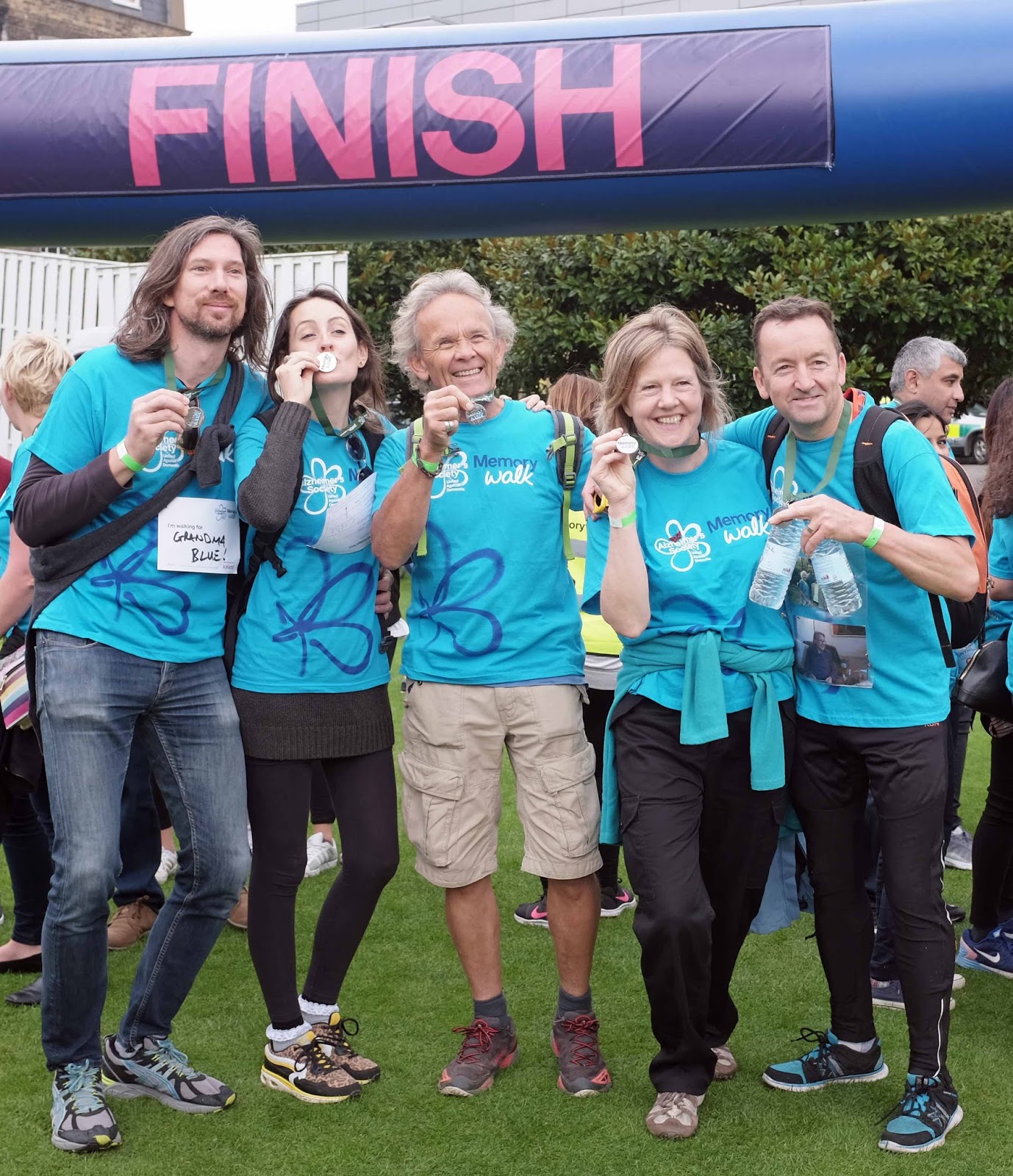 The walkers all pass by, and the clouds gather.  A light rain starts to fall.  Hannah and I return to her new (just moving in....) flat in , where Amanda sits by the bricked up fireplace. 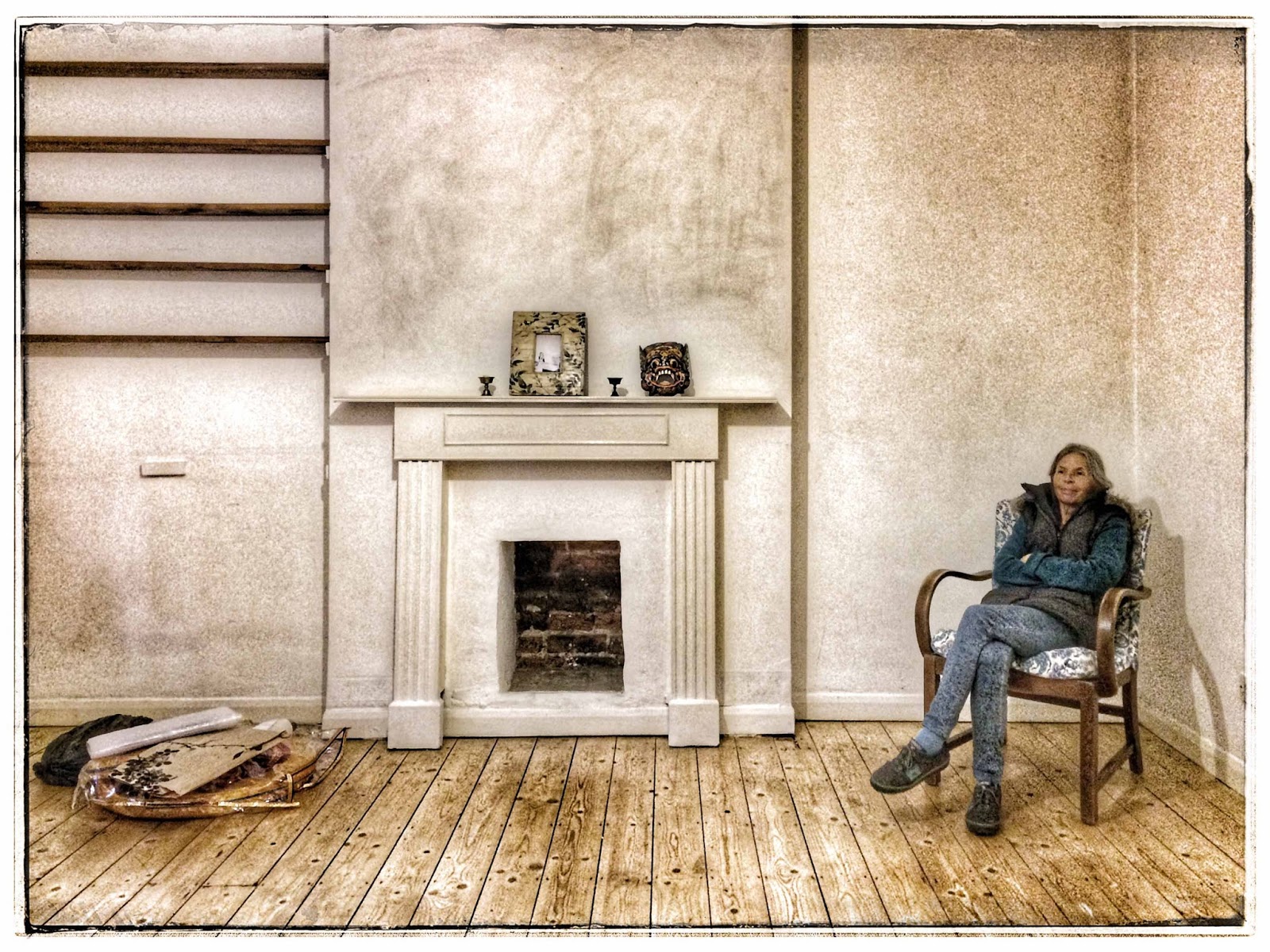 The title of Lucinda Williams’s most recent album, Down Where the Spirit Meets the Bone, is a slightly altered line from one of her father’s poems, which reads in its entirety:

Have compassion for everyone you meet,
even if they don’t want it. What seems conceit,
bad manners, or cynicism is always a sign
of things no ears have heard, no eyes have seen.
You do not know what wars are going on
down there where the spirit meets the bone. 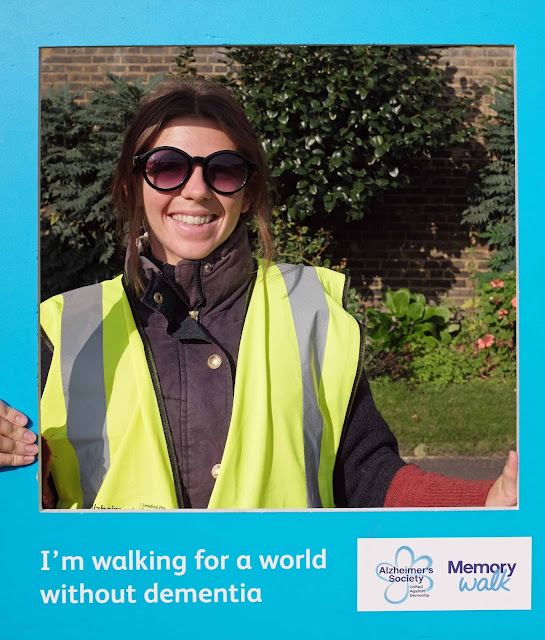