Charles Dickens & The City of Rochester

Cloisterham - A city of another and a bygone time 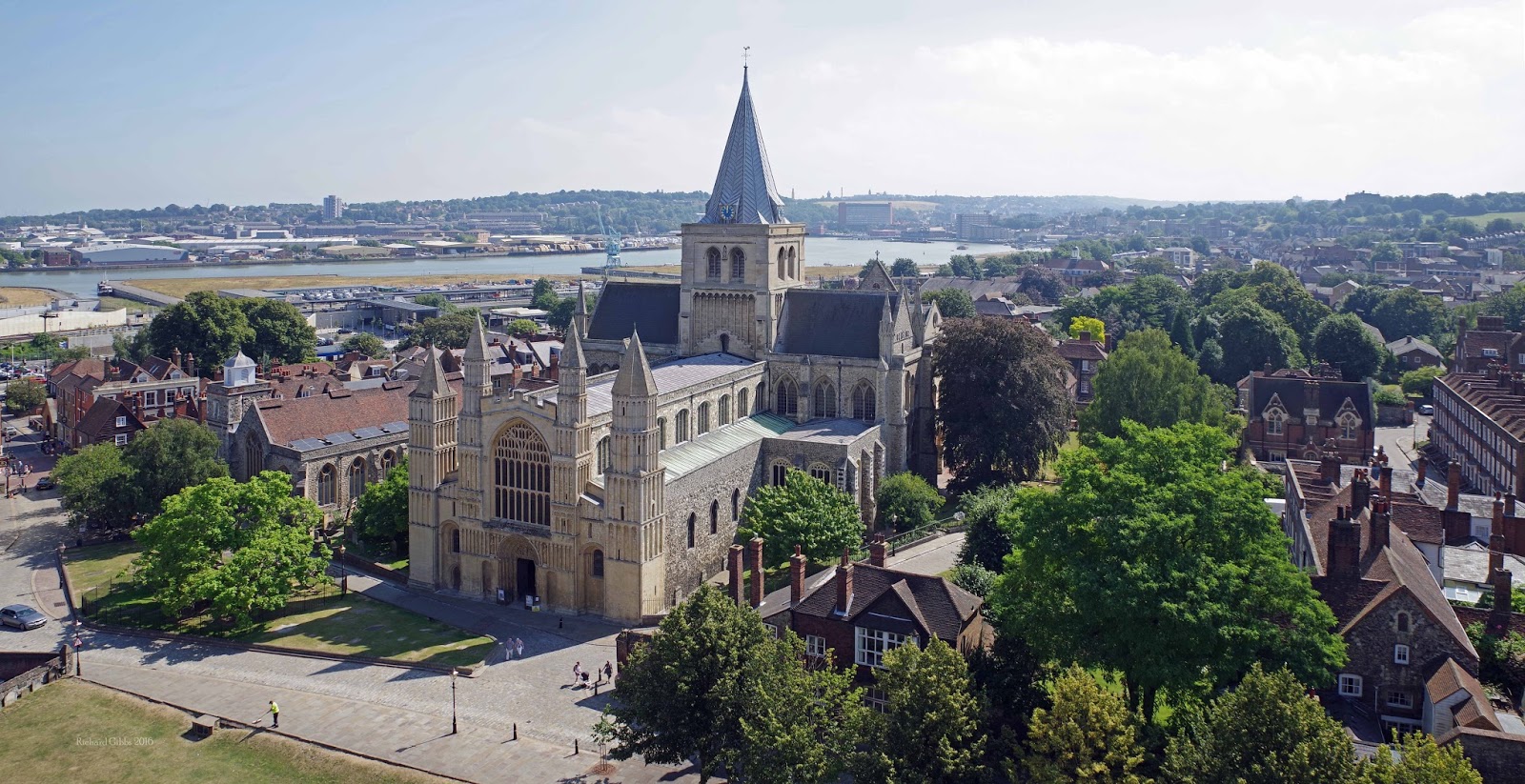 .....the massive gray square tower of an old Cathedral rises before the sight of a jaded traveller.... 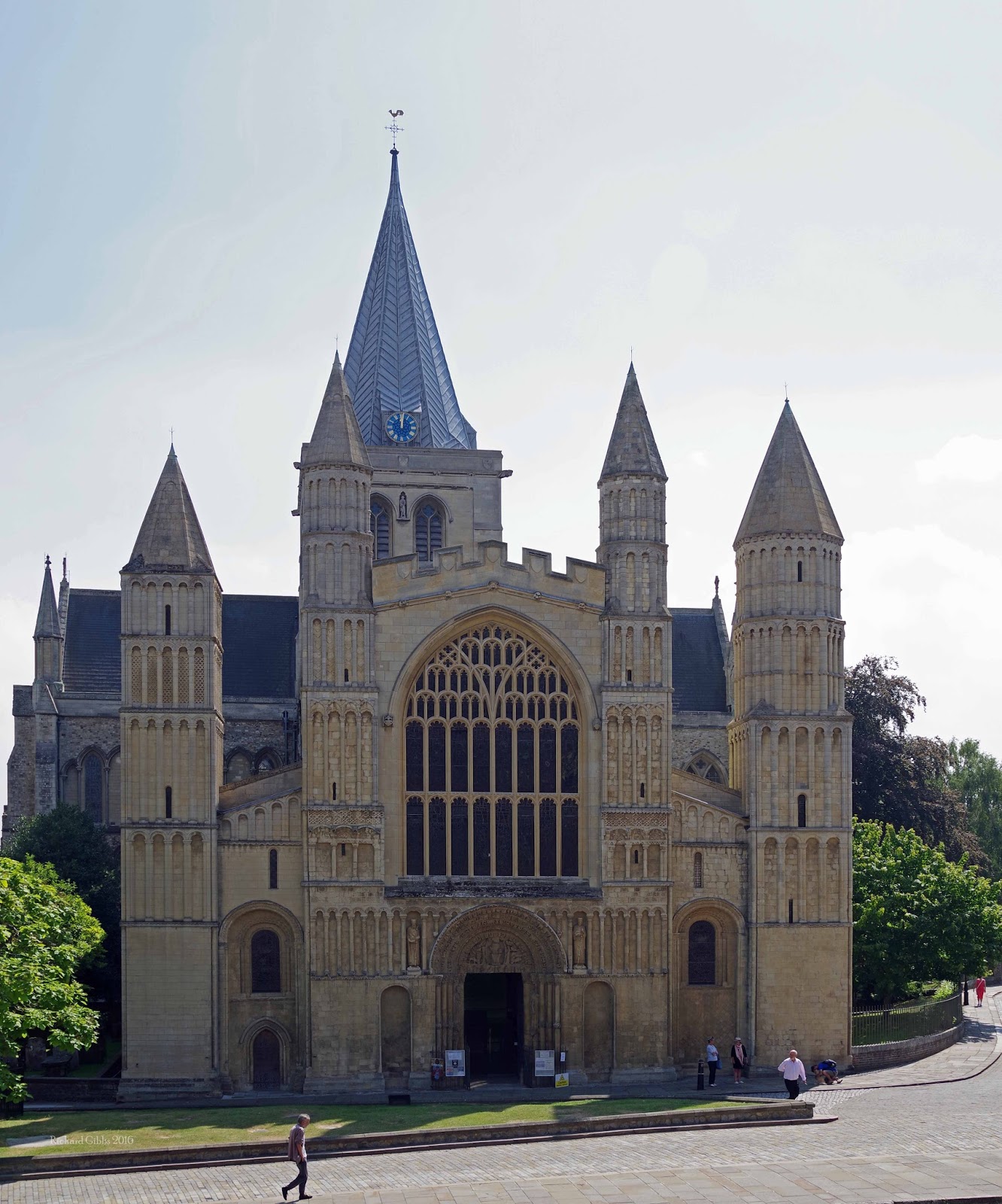 A brilliant morning shines on the old city. Its antiquities and ruins are surpassingly beautiful, with a lusty ivy gleaming in the sun, and the rich trees waving in the balmy air. Changes of glorious light from moving boughs, songs of birds, scents from gardens, woods, and fields - or, rather, from the one great garden of the whole cultivated island in its yielding time - penetrate into the Cathedral, subdue its earthy odour, and preach the Resurrection and the Life. The cold stone tombs of centuries ago grow warm; and flecks of brightness dart into the sternest marble corners of the building, fluttering there like wings.  The Mystery of Edwin Drood 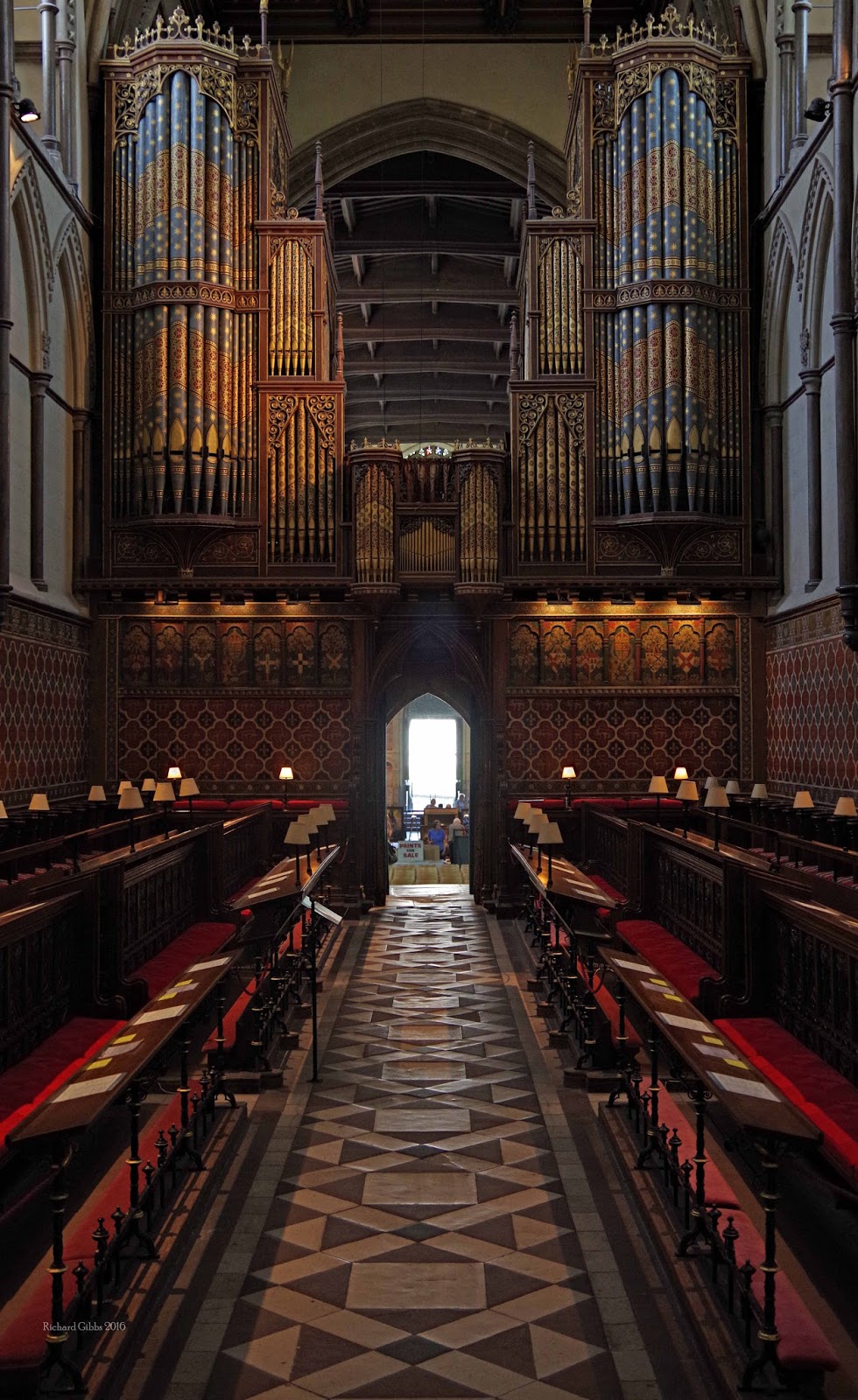 Rochester Cathedral is the second oldest in England, having been founded in 604AD by Bishop Justus. 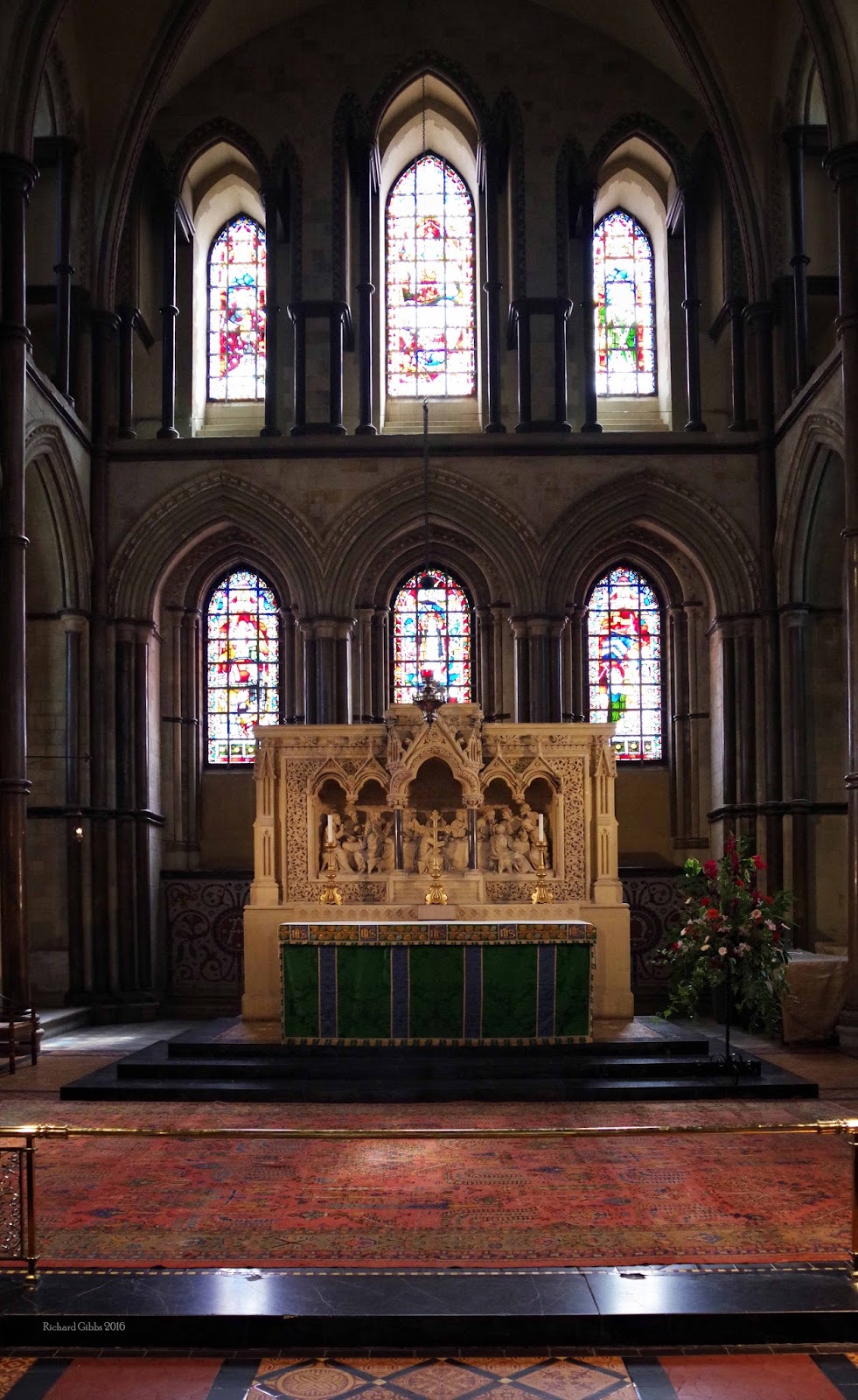 It was a favourite place of Charles Dickens, who spent part of his childhood in nearby Chatham, and who ended his days at his home at Gad's Hill Place, just outside the town. 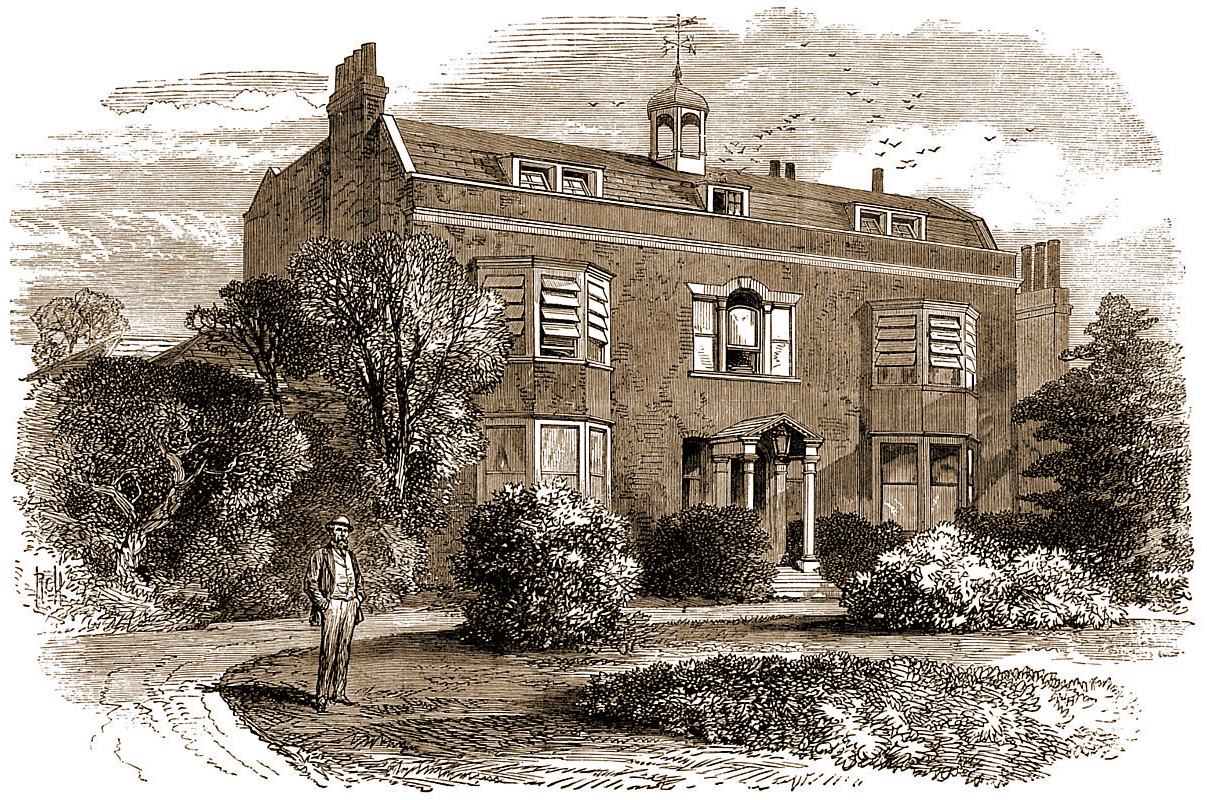 Dickens incorporated several buildings within the town, and nearby, in his writings, and his unfinished last novel, The Mystery of Edwin Drood, was set in the city, disguised under the name of Cloisterham.

An ancient city, Cloisterham, and no meet dwelling-place for any one with hankerings after the noisy world. A monotonous, silent city, deriving an earthy flavour throughout from its Cathedral crypt, and so abounding in vestiges of monastic graves, that the Cloisterham children grow small salad in the dust of abbots and abbesses, and make dirt-pies of nuns and friars; while every ploughman in its outlying fields renders to once puissant Lord Treasurers, Archbishops, Bishops, and such-like, the attention which the Ogre in the story-book desired to render to his unbidden visitor, and grinds their bones to make his bread.

It was while staying at the Bull Hotel (now the Royal Victoria and Bull, where Princess Victoria stayed overnight in 1836) that Mr Pickwick walked across Rochester Bridge and mused:

On either side, the banks of the Medway, covered with cornfields and pastures, with here and there a windmill, or a distant church, stretched away as far as the eye could see, presenting a rich and varied landscape, rendered more beautiful by the changing shadows which passed swiftly across it, as the thin and half-formed clouds skimmed away in the light of the morning sun.

In The Mystery of Edwin Drood, Edwin's uncle, John Jasper, opium addict and Lay Precentor of Cloisterham Cathedral lodged in the eighteenth century timber house on top of the fifteenth century Chertsey's Gate.

They all three look towards an old stone gatehouse crossing the Close, with an arched thoroughfare passing beneath it..... (though this is actually the Deanery Gate.) 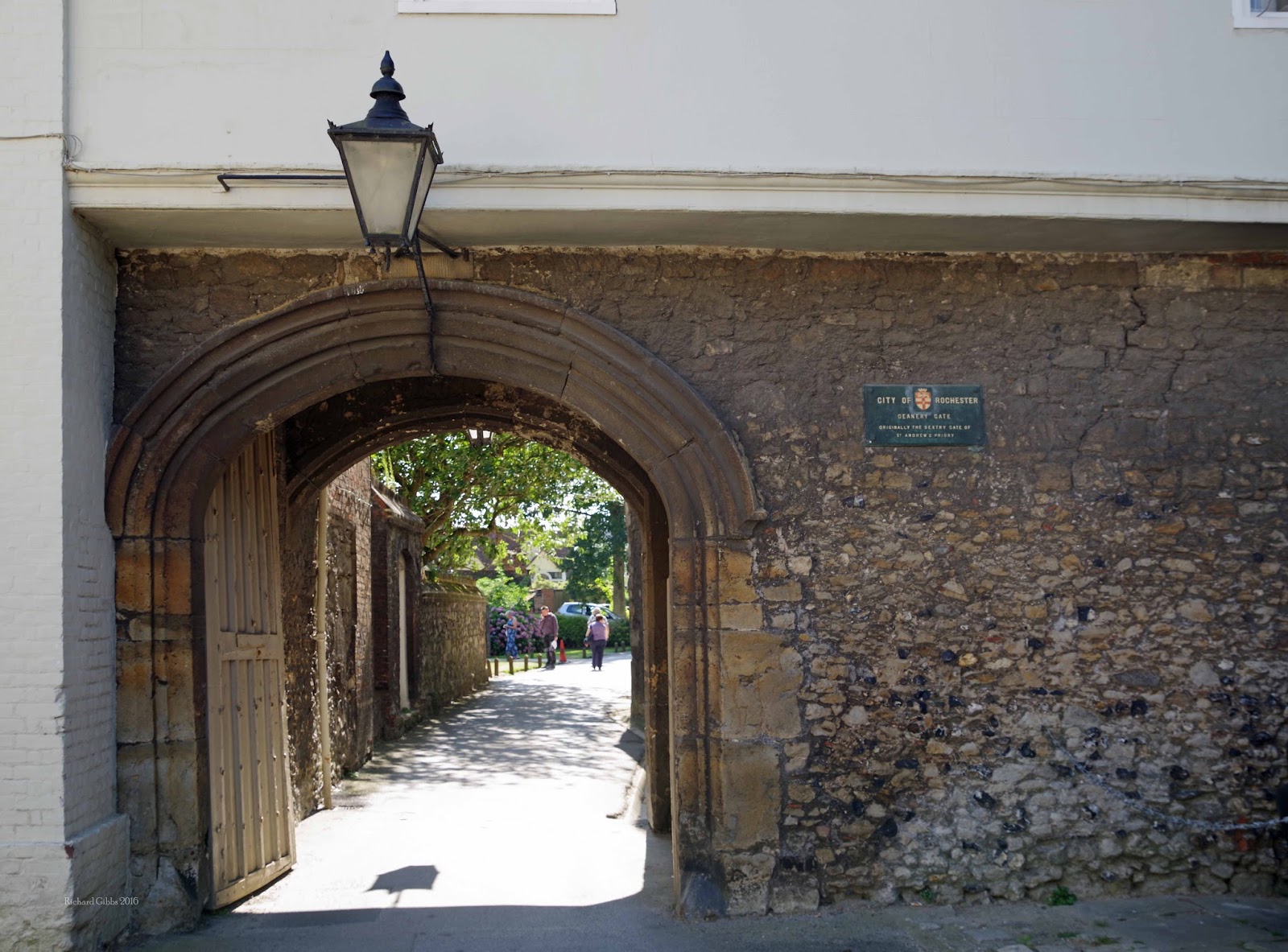 Another character in this novel, Hiram Grewgious, who is a lawyer and guardian of Rosa Bud, Edwin's betrothed, peeps into the Cathedral. 'Dear Me,' he says, 'it’s like looking down the throat of Old Time.' Old Time heaved a mouldy sigh from tomb and arch and vault; and gloomy shadows began to deepen in corners; and damps began to rise from green patches of stone; and jewels, cast upon the pavement of the nave from stained glass by the declining sun, began to perish... all became grey, murky and sepulchral, and the cracked monotonous mutter went on like a dying voice, until the organ and the choir burst forth, and drowned it in a sea of music. The Mystery of Edwin Drood 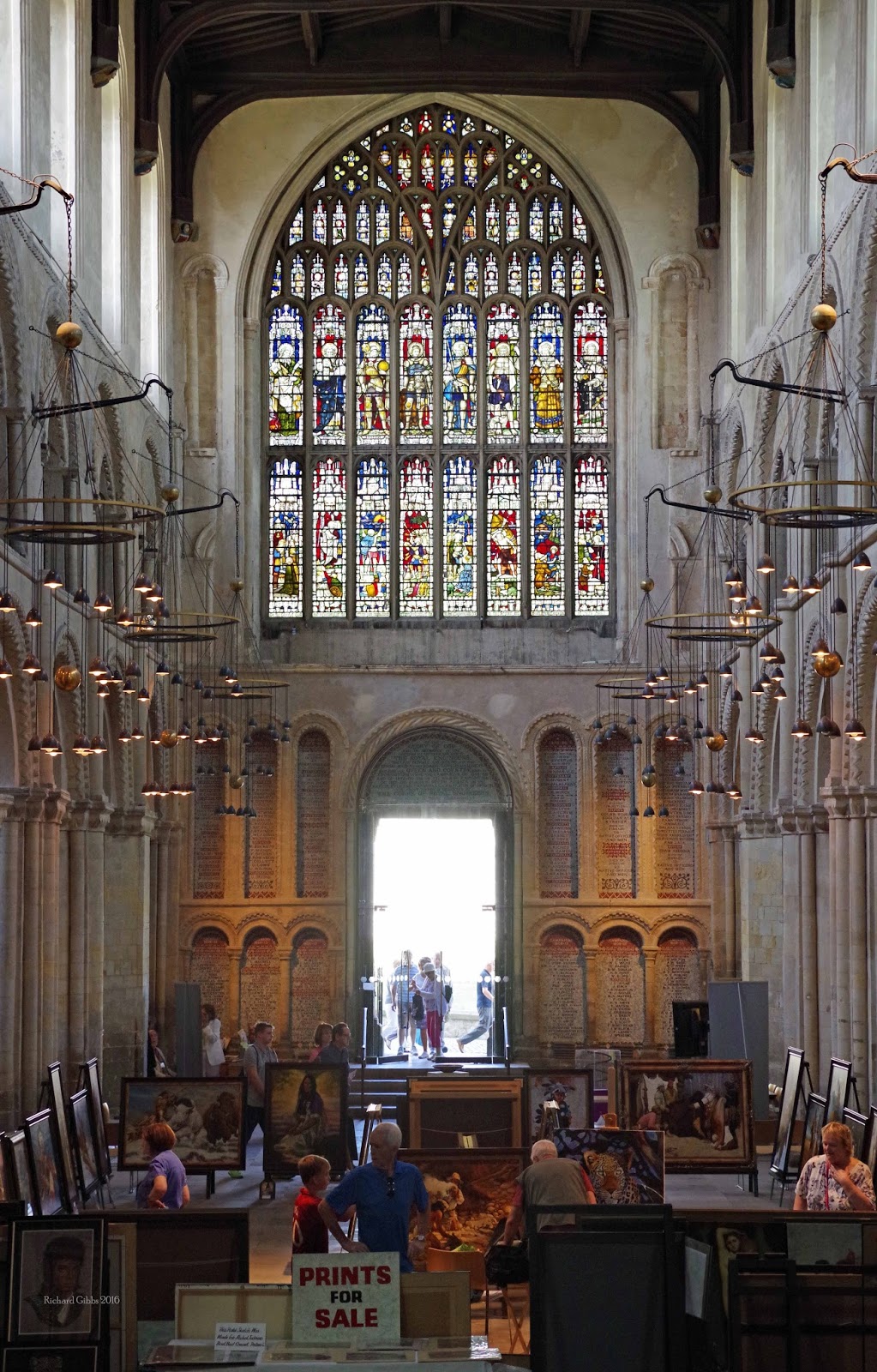 A drowsy city, Cloisterham, whose inhabitants seem to suppose, with an inconsistency more strange than rare, that all its changes lie behind it, and that there are no more to come. A queer moral to derive from antiquity, yet older than any traceable antiquity. So silent are the streets of Cloisterham (though prone to echo on the smallest provocation), that of a summer-day the sunblinds of its shops scarce dare to flap in the south wind; while the sun-browned tramps, who pass along and stare, quicken their limp a little, that they may the sooner get beyond the confines of its oppressive respectability. 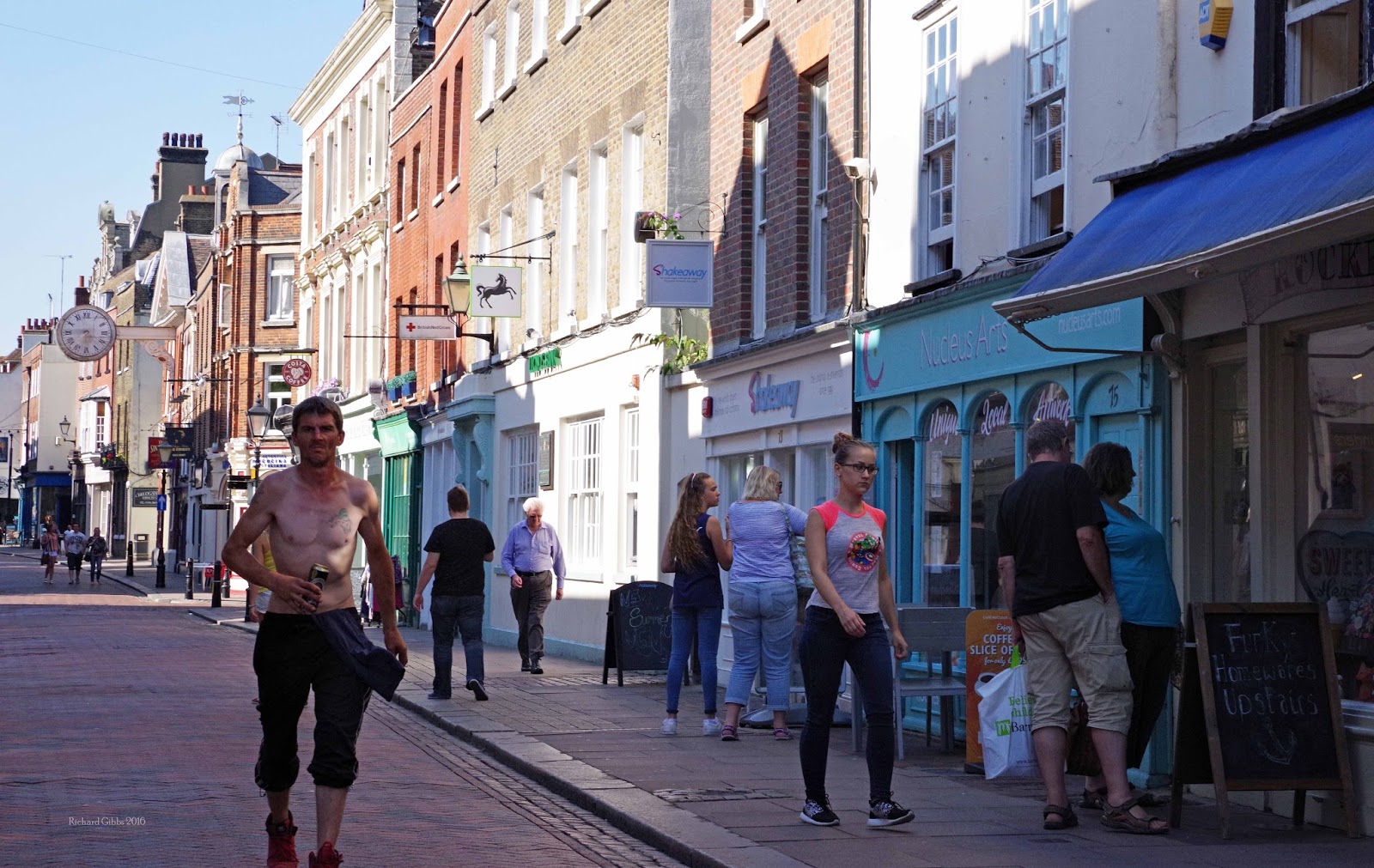 The town is dominated by its Norman Castle, which was built in 1128 and has the tallest keep of its kind. 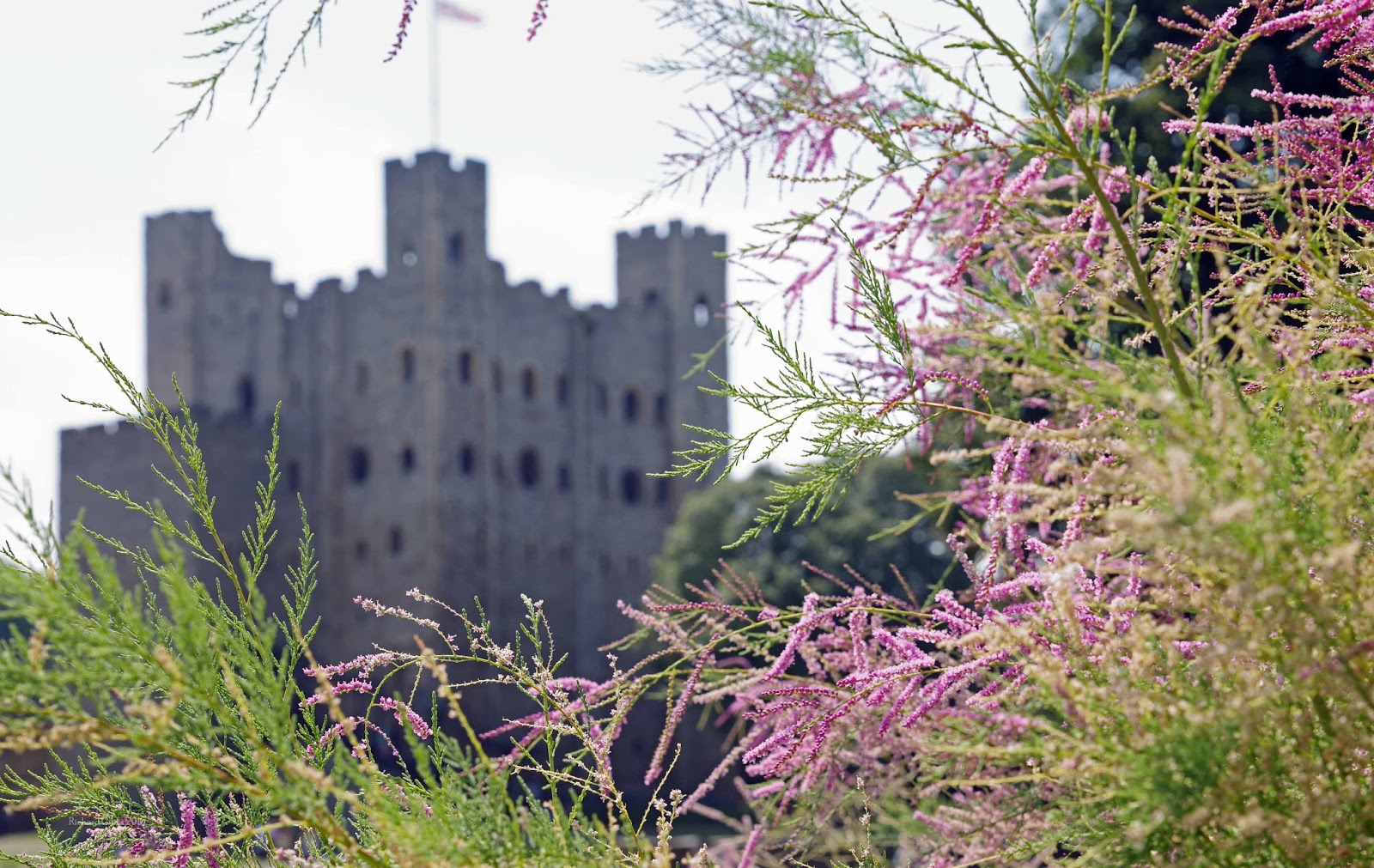 Huge knots of sea-weed hung upon the jagged and pointed stones, trembling in every breath of wind; and the green ivy clung mournfully round the dark and ruined battlements. The Pickwick Papers 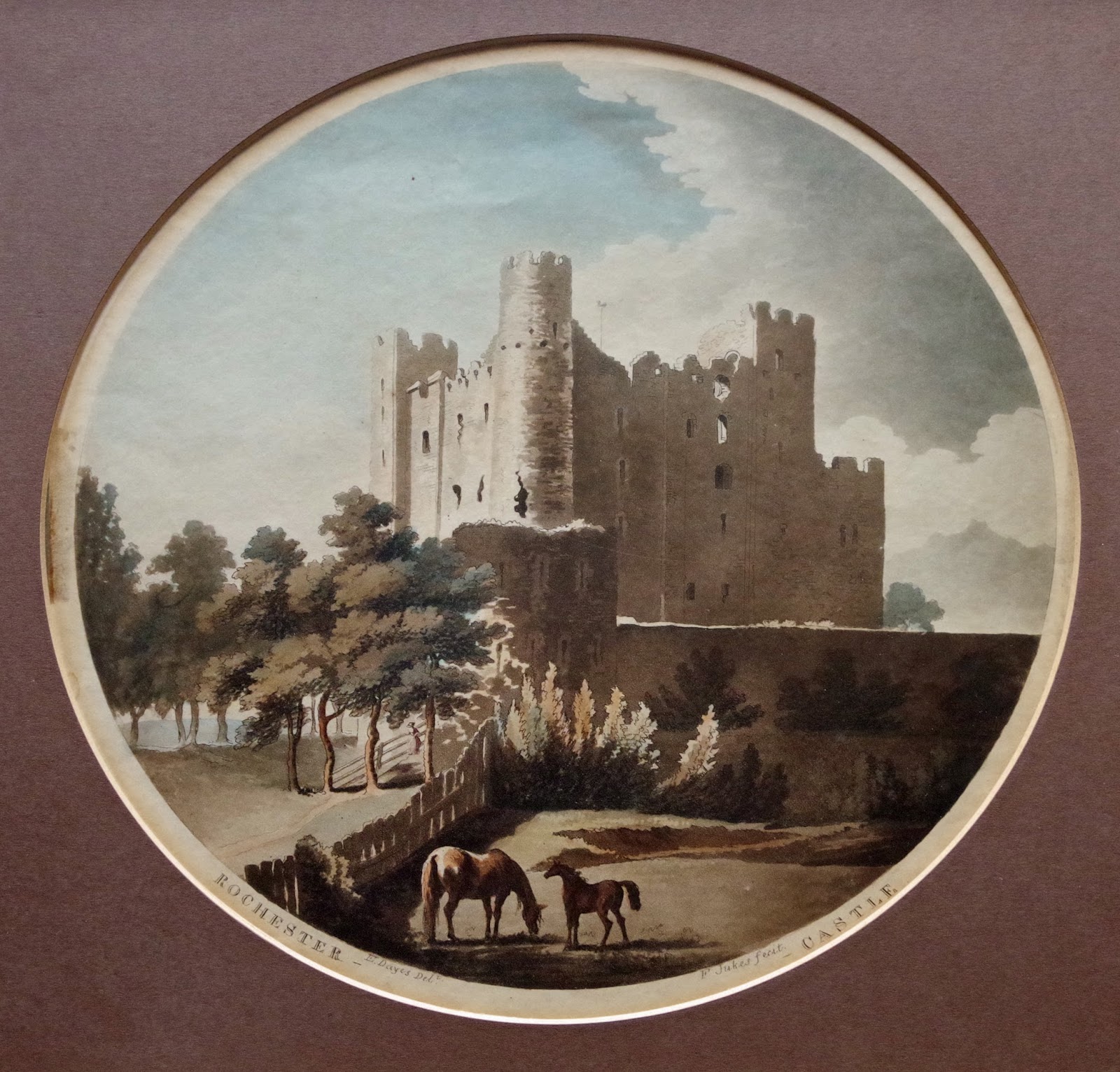 Behind it rose the ancient castle, its towers roofless, and its massive walls crumbling away, but telling us proudly of its own might and strength, as when, seven hundred years ago, it rang with the clash of arms, or resounded with the noise of feasting and revelry.....  The Pickwick Papers 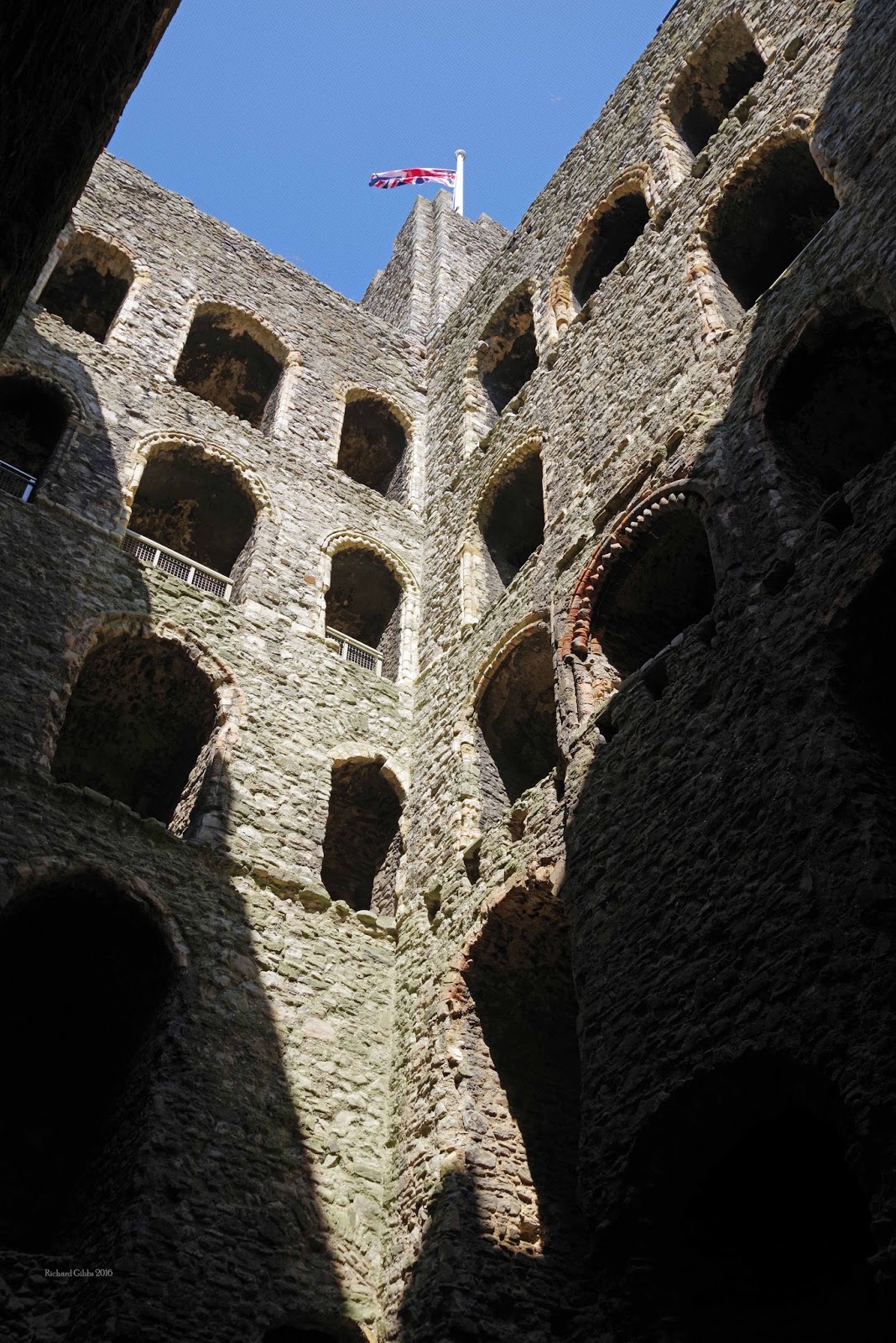 From the battlements there are far reaching views over the town and up the Medway, and one notable building (the white house in this picture) is known as Satis House, from which Dickens took the name for Miss Havisham's home.... 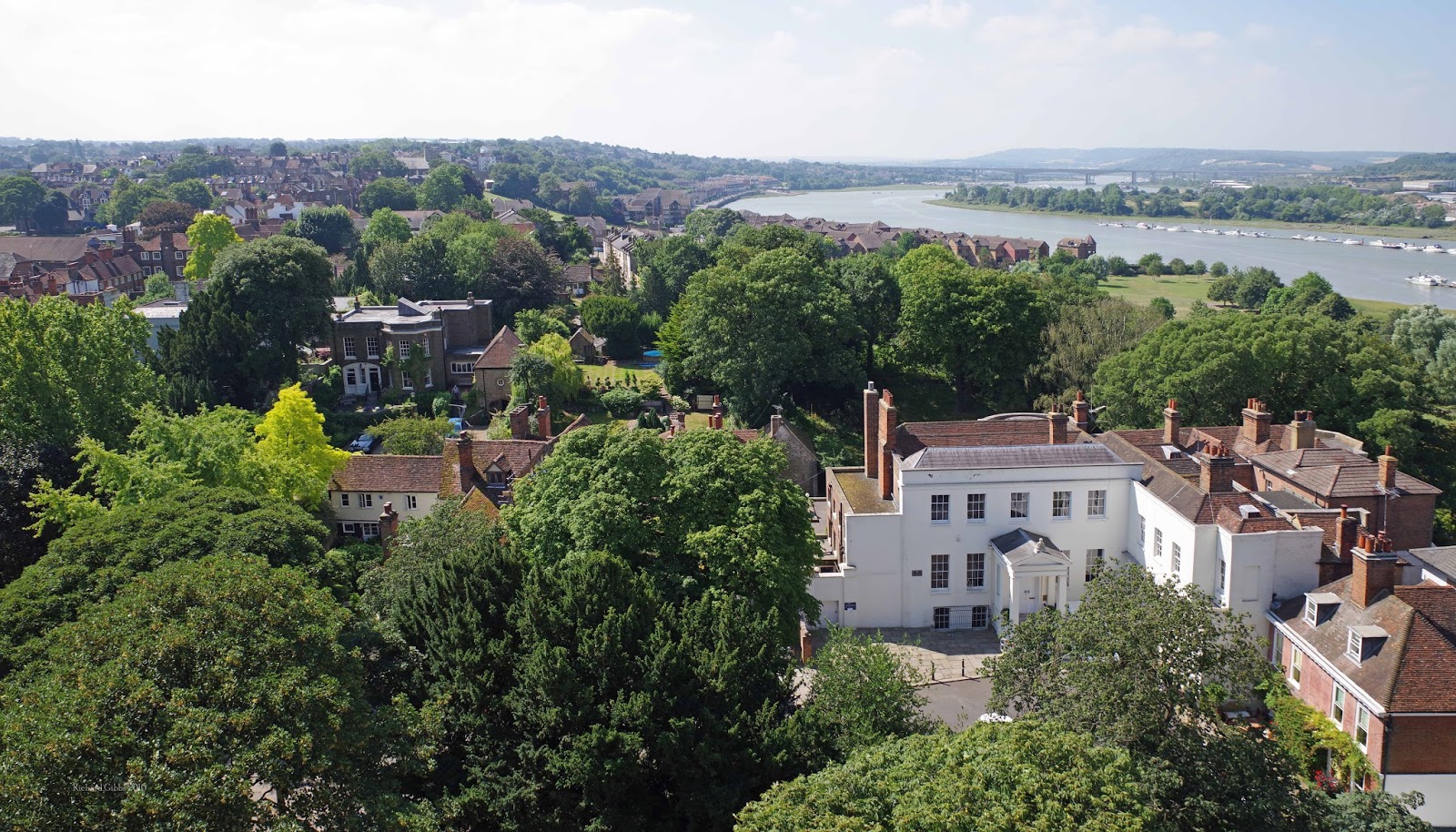 Richard Watts, a local benefactor, lived here in the sixteenth century and in 1573 he entertained Queen Elizabeth.  Her pronouncement on his hospitality was that it was satis (enough), hence the name.....

The actual model for Satis House in Great Expectations was Restoration House, which was built in 1587 and is said to be where Charles II spent the night of 28th May 1660 here at his restoration.... 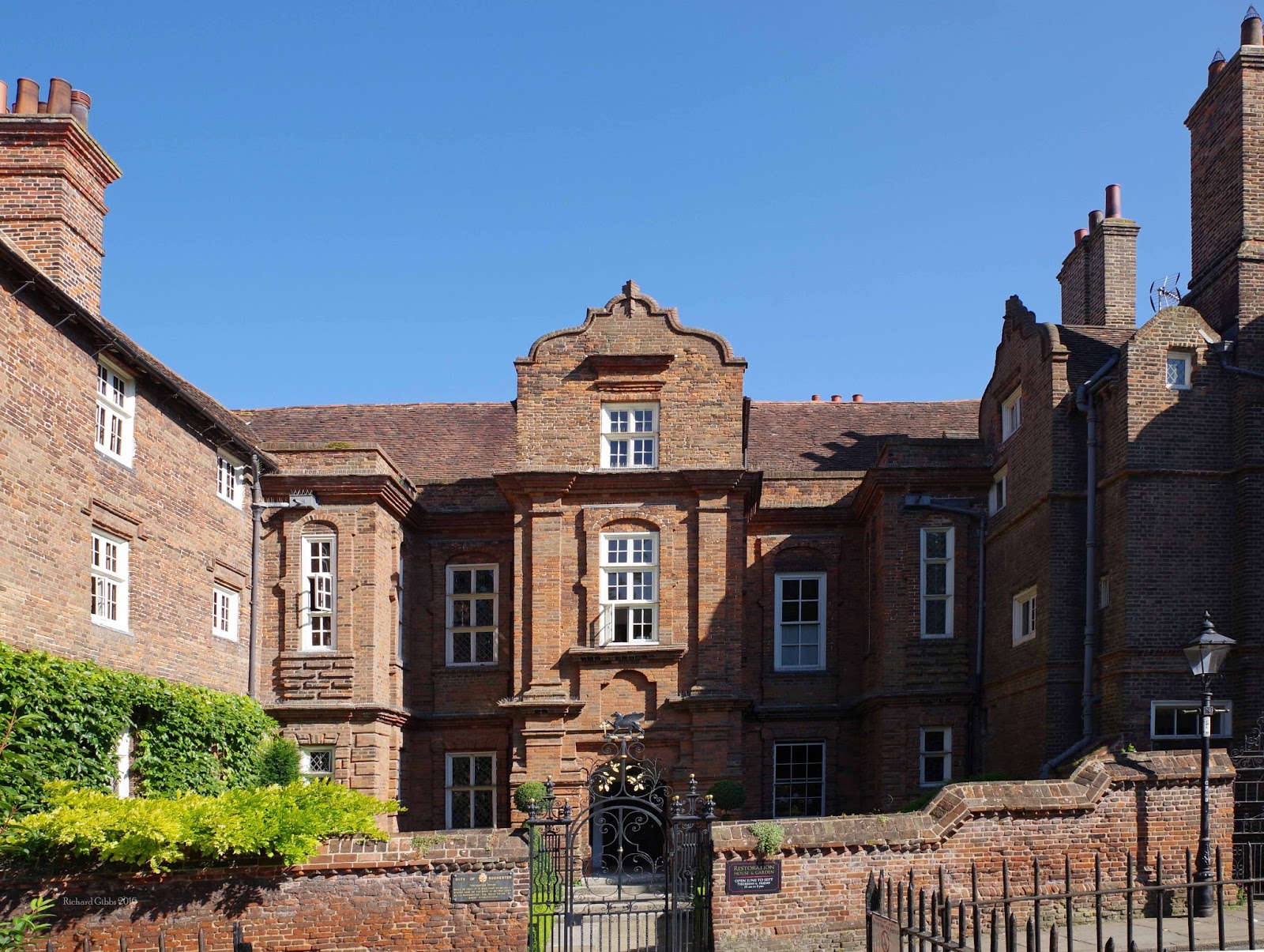 Within a quarter of an hour we came to Miss Havisham's House, which was of old brick, and dismal, and had a great many iron bars to it. Some of the windows had been walled up; of those that remained, all the lower were rustily barred. There was a courtyard in front, and that was barred... I peeped in... and saw that at the side of the house there was a large brewery. No brewing was going on in it, and none seemed to have gone on for a long time....

On Monday, June 6th, 1870, Dickens was seen leaning on the fencing in front of the house having walked his dogs over from Gad's Hill.  He was observed to be studying the building carefully.  He returned to his home and, on June 9th, he completed Chapter 23 of Edwin Drood. Then, that evening, having complained of feeling very ill, he collapsed and died. 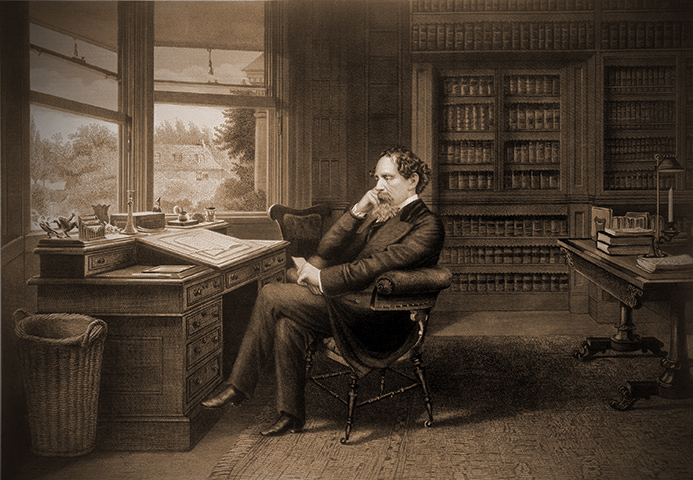 Another link to Great Expectations is the Guildhall, built in 1687, which is where Pip is taken to be apprenticed to Joe Gargery. The hall was a queer place, I thought, with higher pews in it than a church.... and with some shining black portraits on the walls, which my unartistic eye regarded as a composition of hardbake and sticking-plaster.... 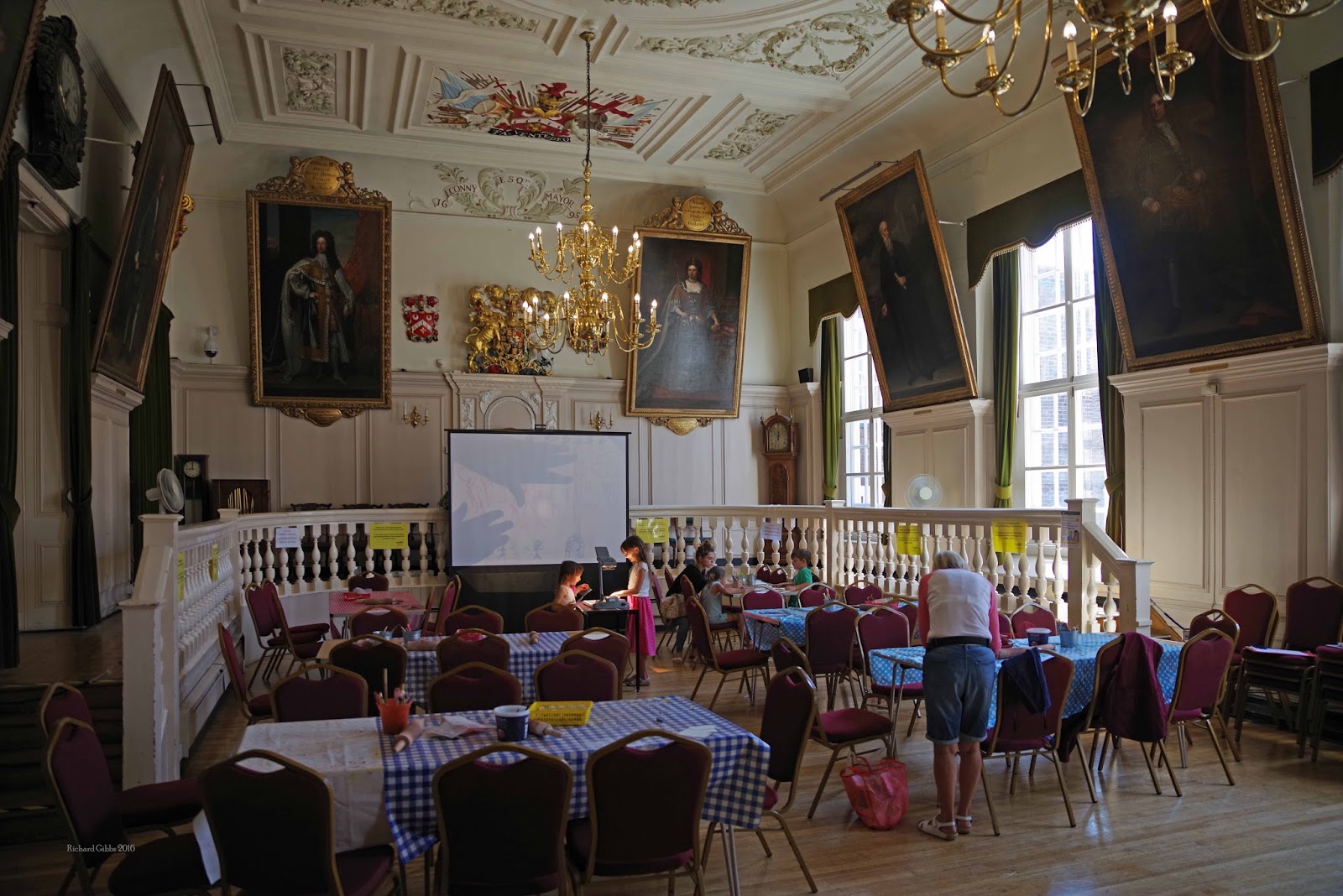 Also in the Guildhall museum there is a reconstruction of one of the hulks, or prison ships, representing the kind of thing that Magwitch escaped from to terrify young Pip in Cooling Churchyard.... 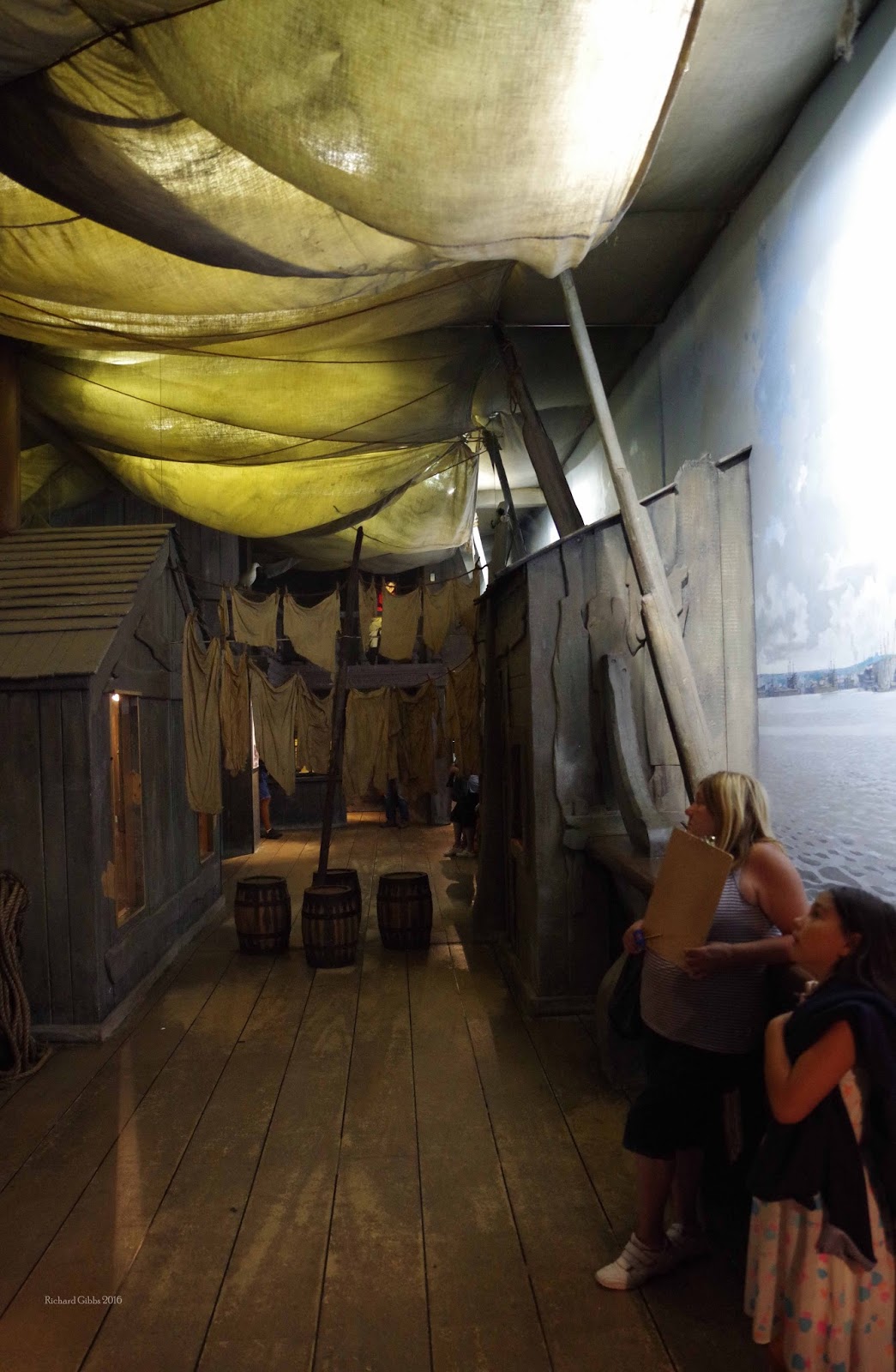 Another fine building in Rochester High Street is Eastgate House, which is the 'Nuns' House' in Edwin Drood, where Rosa Bud is educated.  It was built in the late sixteenth century and, though it never was a convent, Dickens describes it as a venerable brick edifice, whose present appellation is doubtless derived from the legend of its conventual uses.  On the trim gate enclosing its old courtyard is a resplendent brass plate flashing forth the legend: 'Seminary for Young Ladies. Miss Twinkleton.'

Unfortunately, at the time of my visit, the House was undergoing extensive renovation work, but visible from the High Street is the back of the top floor of Dickens's Swiss Chalet, which had been presented to him by a friend, the French actor Charles Fechter, in 1864.  It was originally assembled across the road from his home at Gad's Hill, and this was his preferred quiet place to write and study in the last five years of his life. 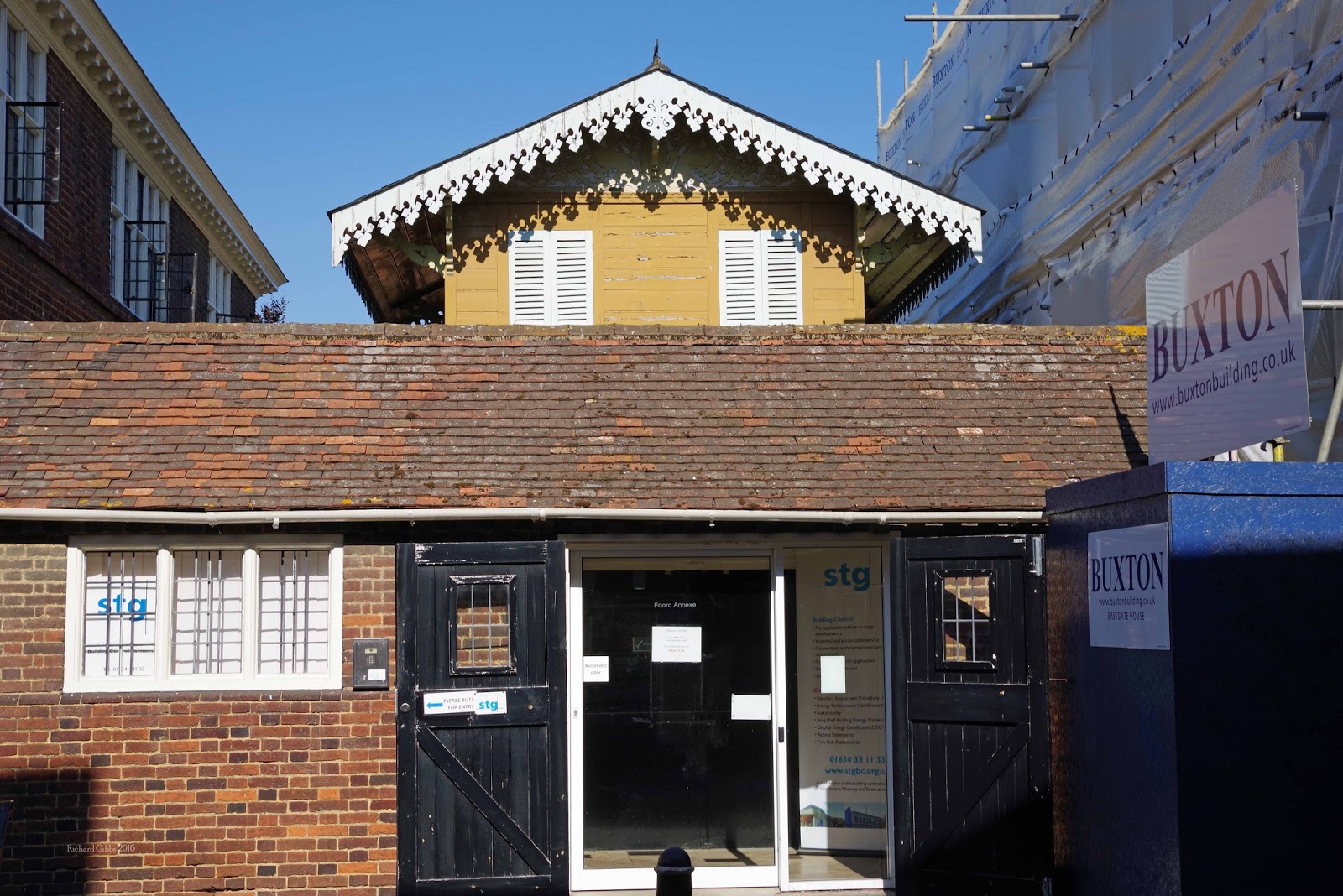 Rochester holds an annual Dickens' Festival in June, and it is not difficult to imagine the writer striding down the High Street even today.  There are many buildings which would be familiar to him, even if he never described them in his books: 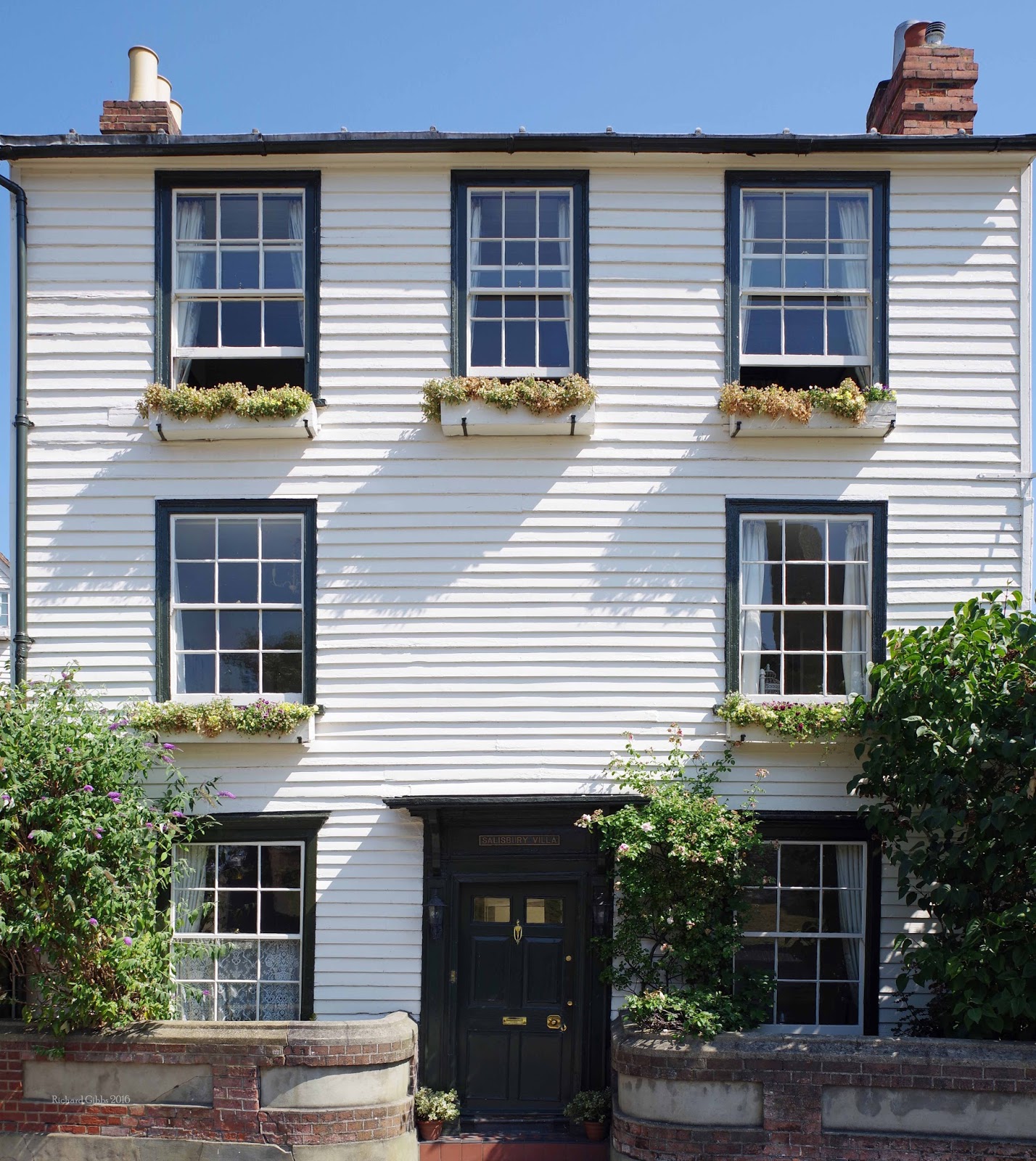 And some of the views and alleyways cannot have changed much in 150 years: 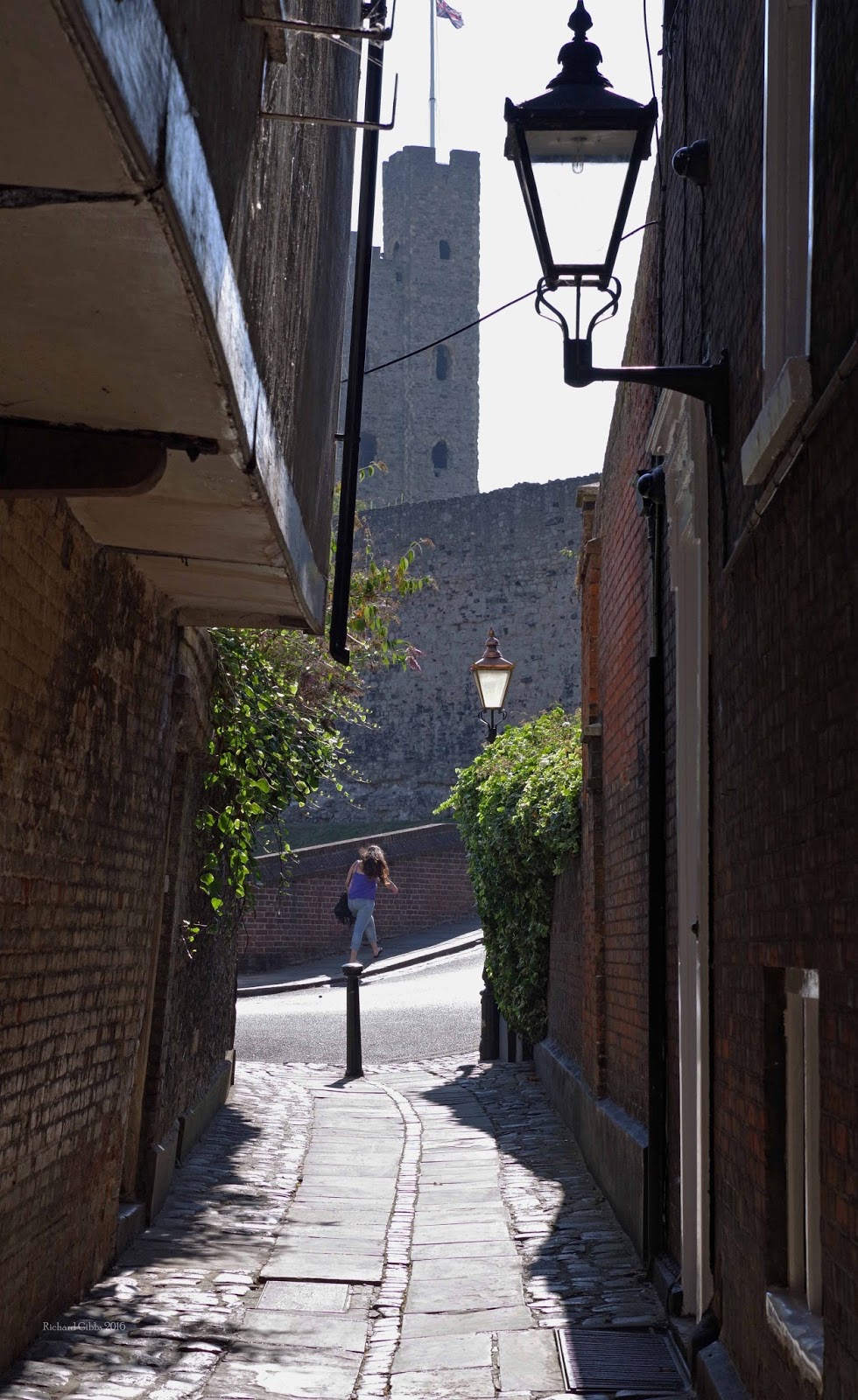 And of course there are Dickensian traces in all walks of life, whether in the naming of shops: 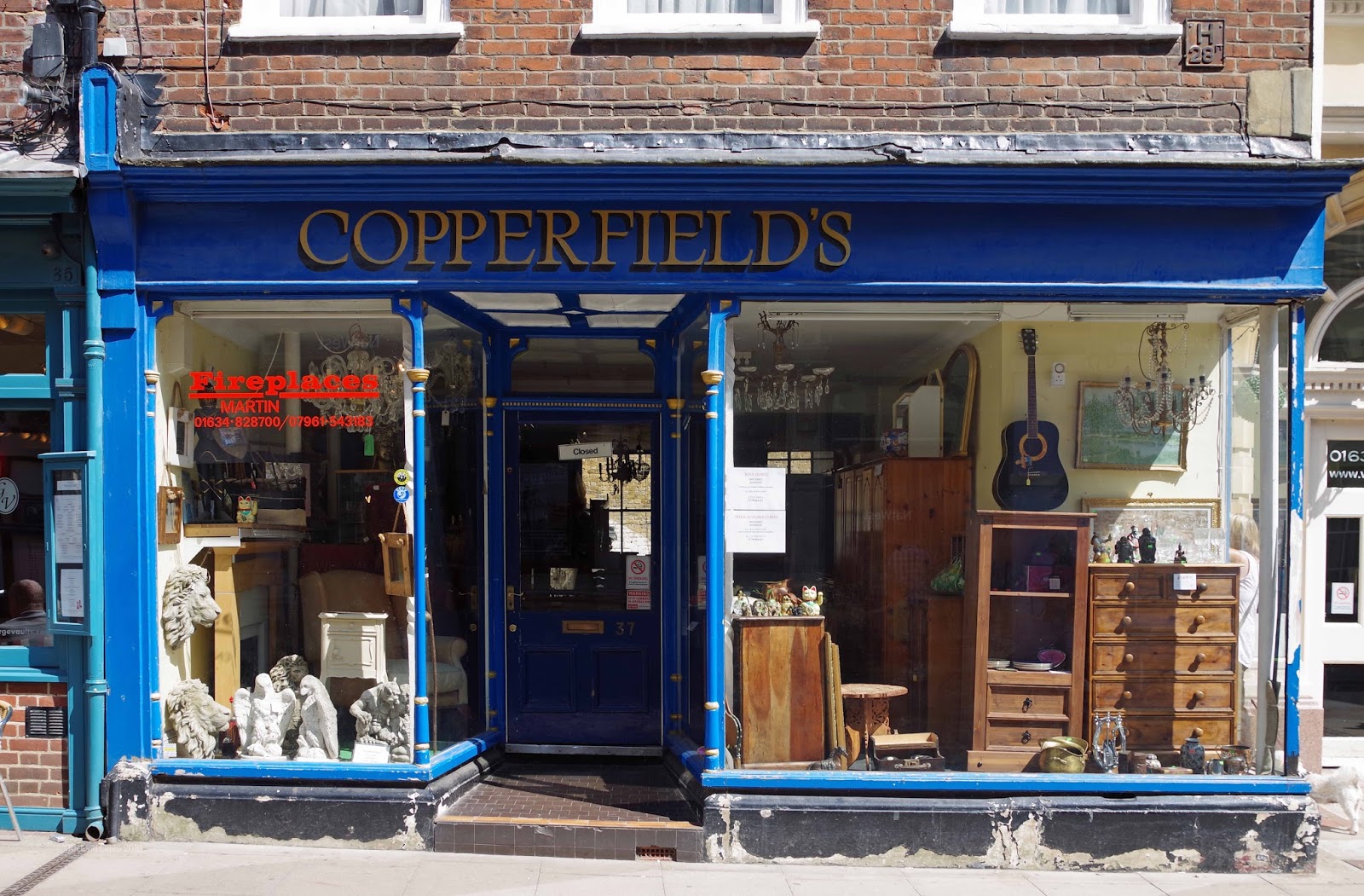 Or in the airs and graces of the people and their dogs taking tea on the terrace: 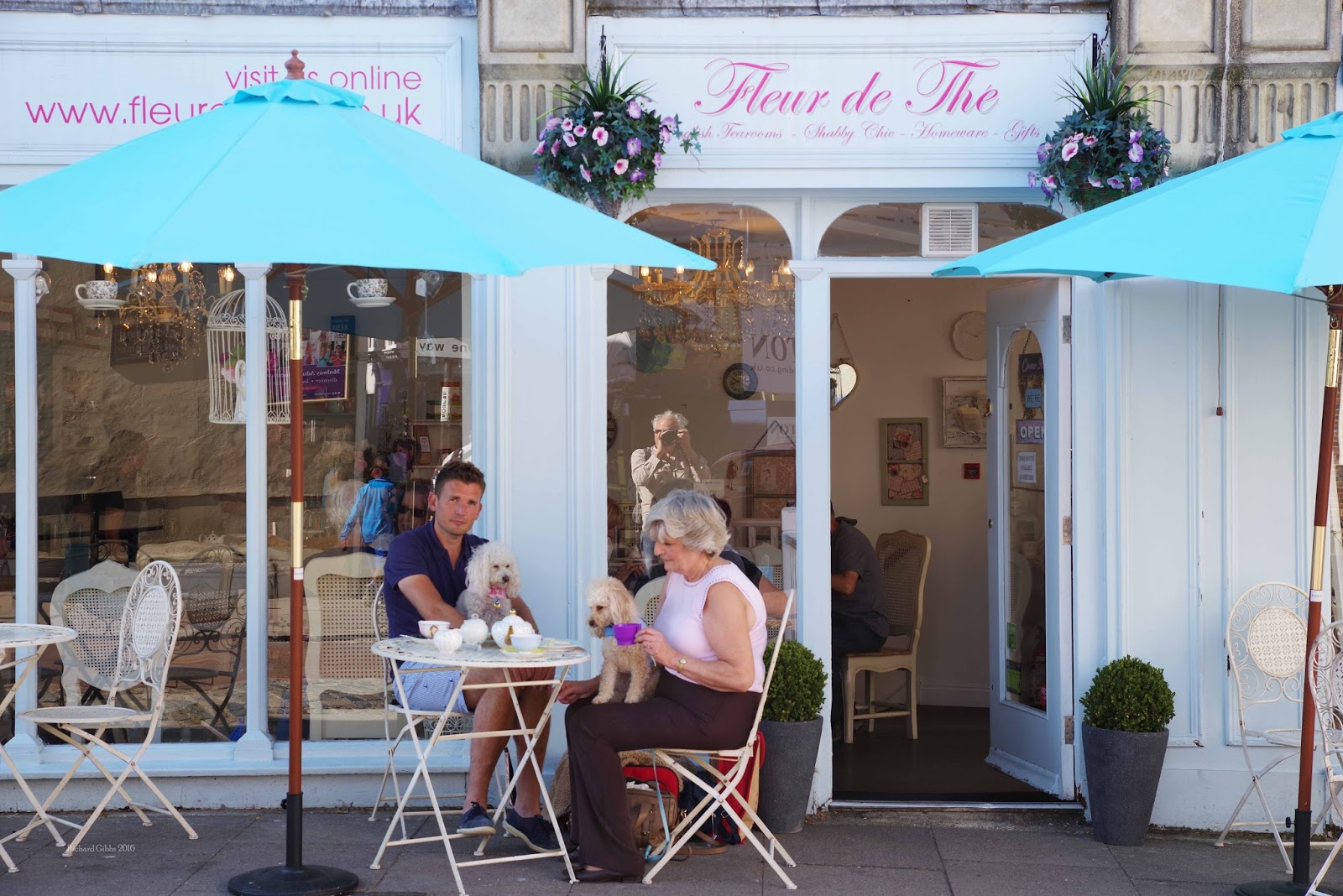 But, in a way, it is the less pretty part of town, further up the High Street toward Chatham, past the now closed 1892 railway station, that seems more Dickensian.... 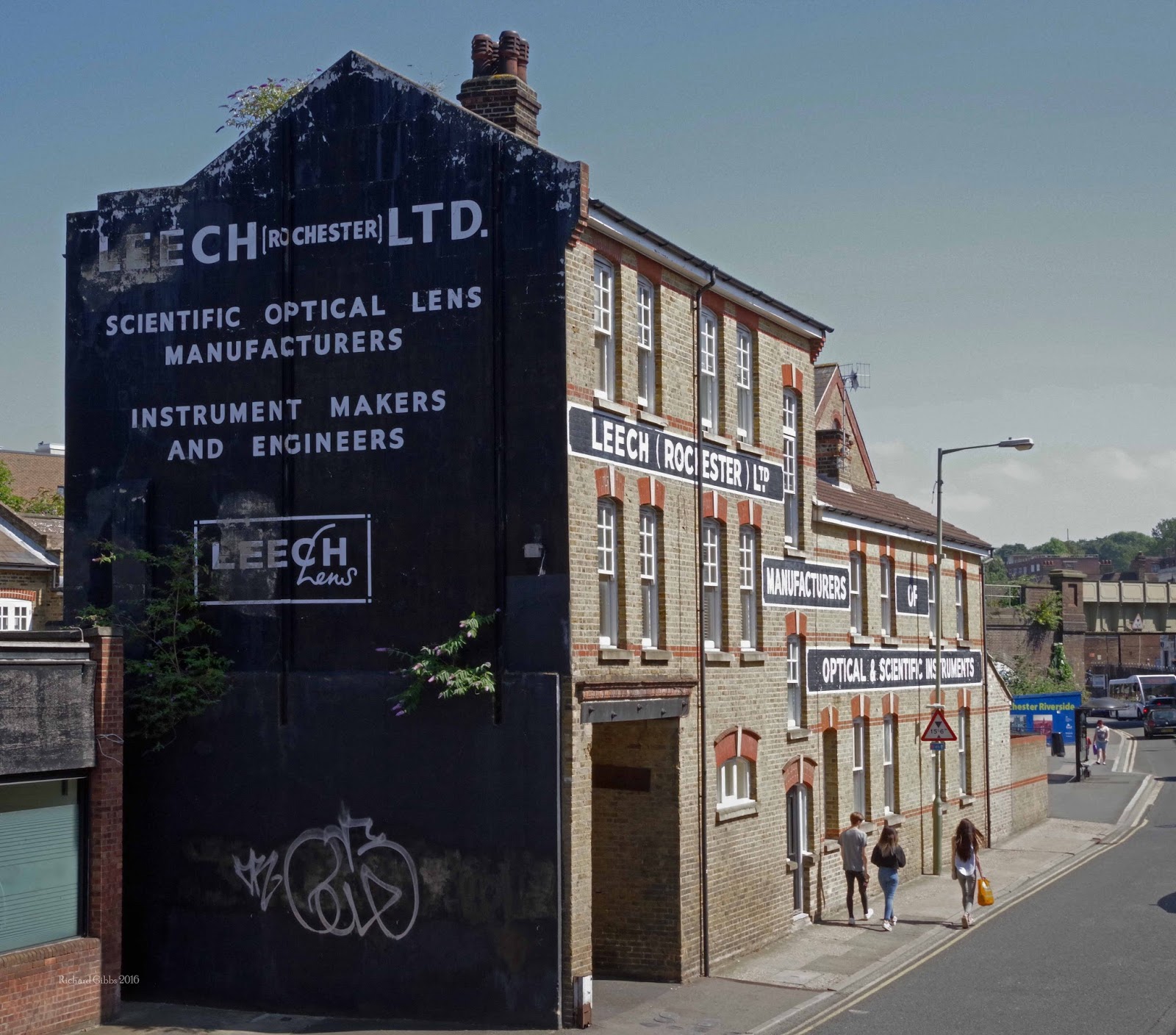 The now derelict Chatham House must have cut a fine figure (and is apparently still remarkable inside): 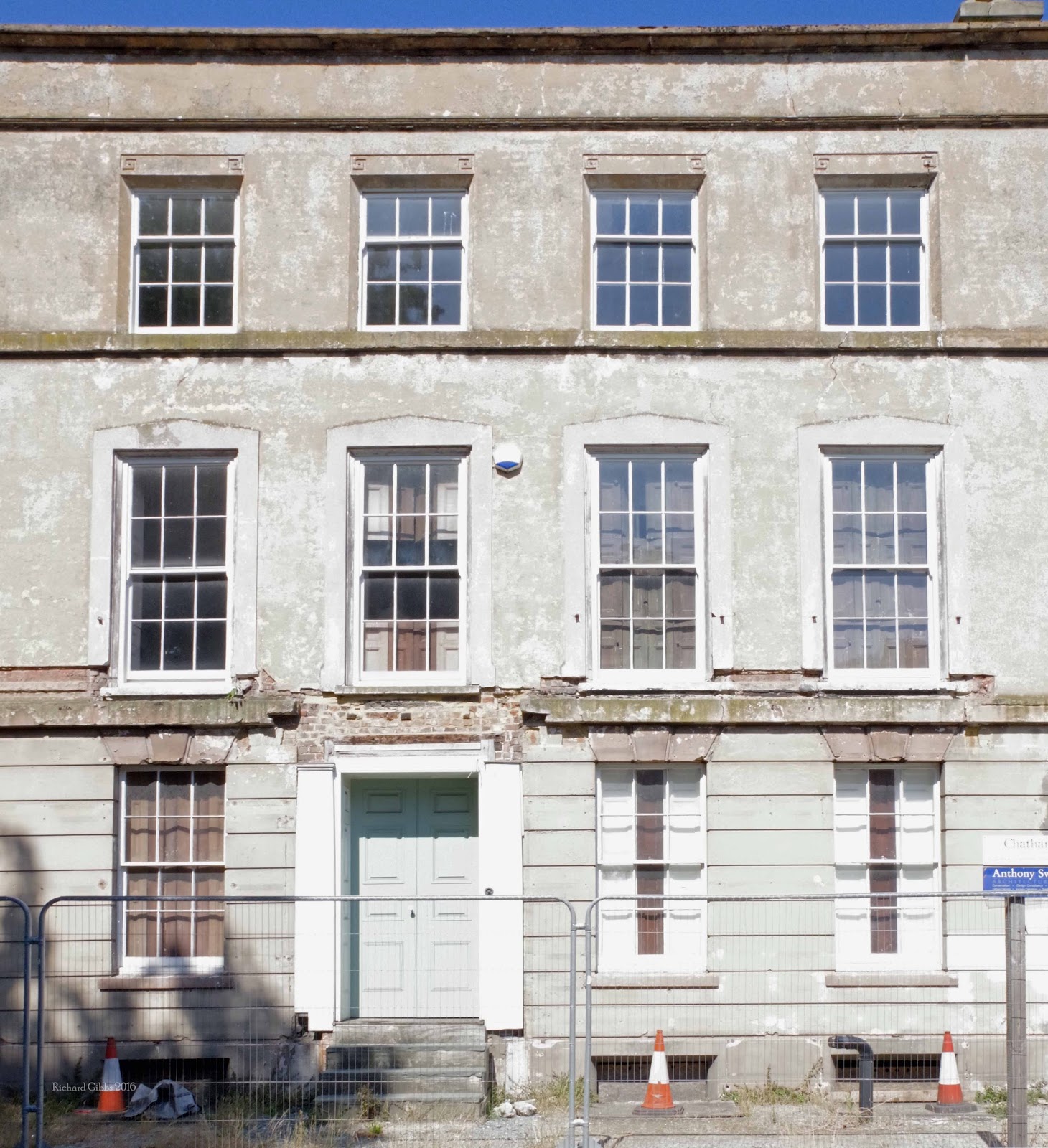 And I wonder whether Dickens ever sampled beers from the redundant Lion Brewery (once Arkoll's) round the corner (on Hulkes Lane, named after an eighteenth century mayor)? 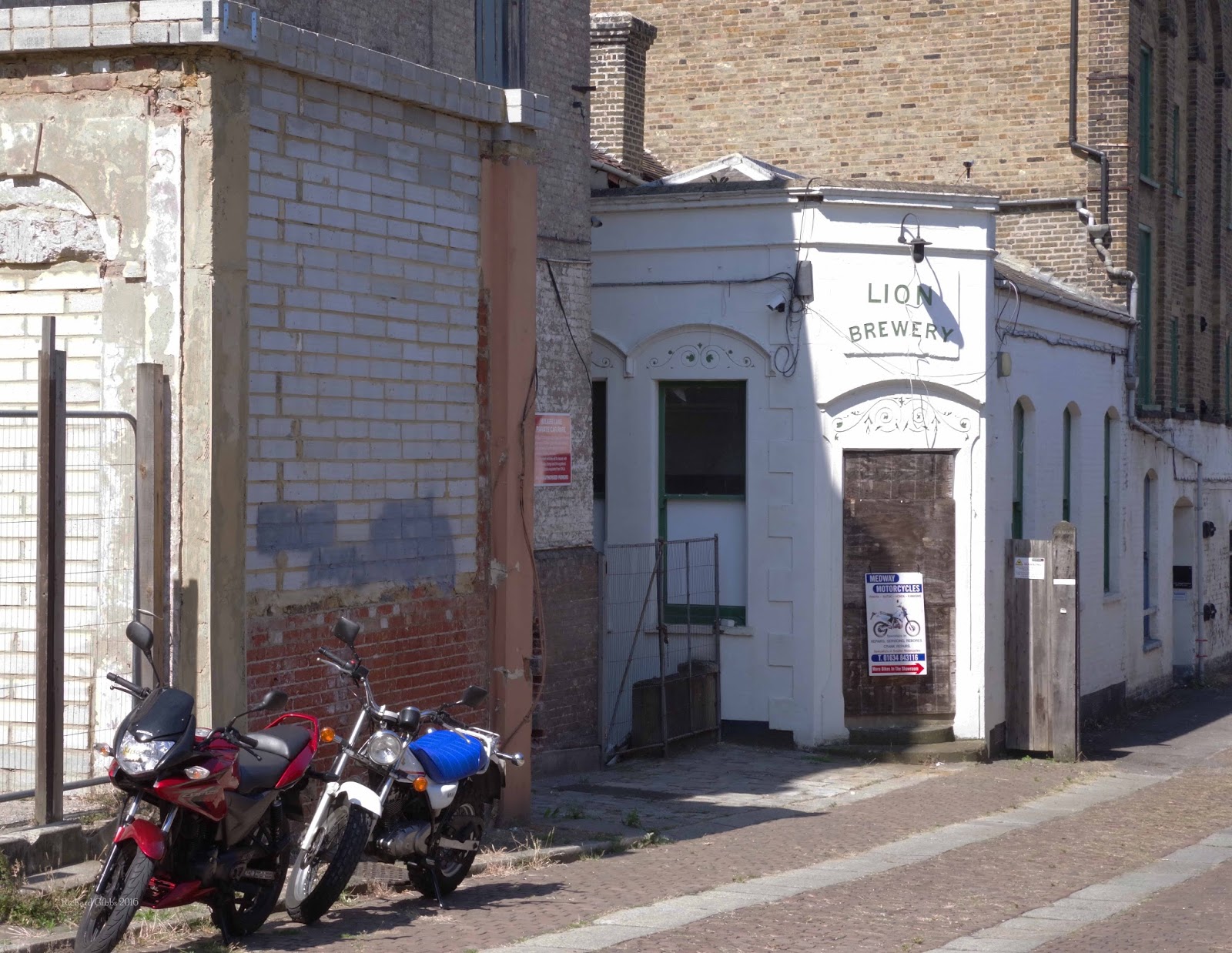 Other traces of victorian industry remain in the area, though they probably won't be there for long: 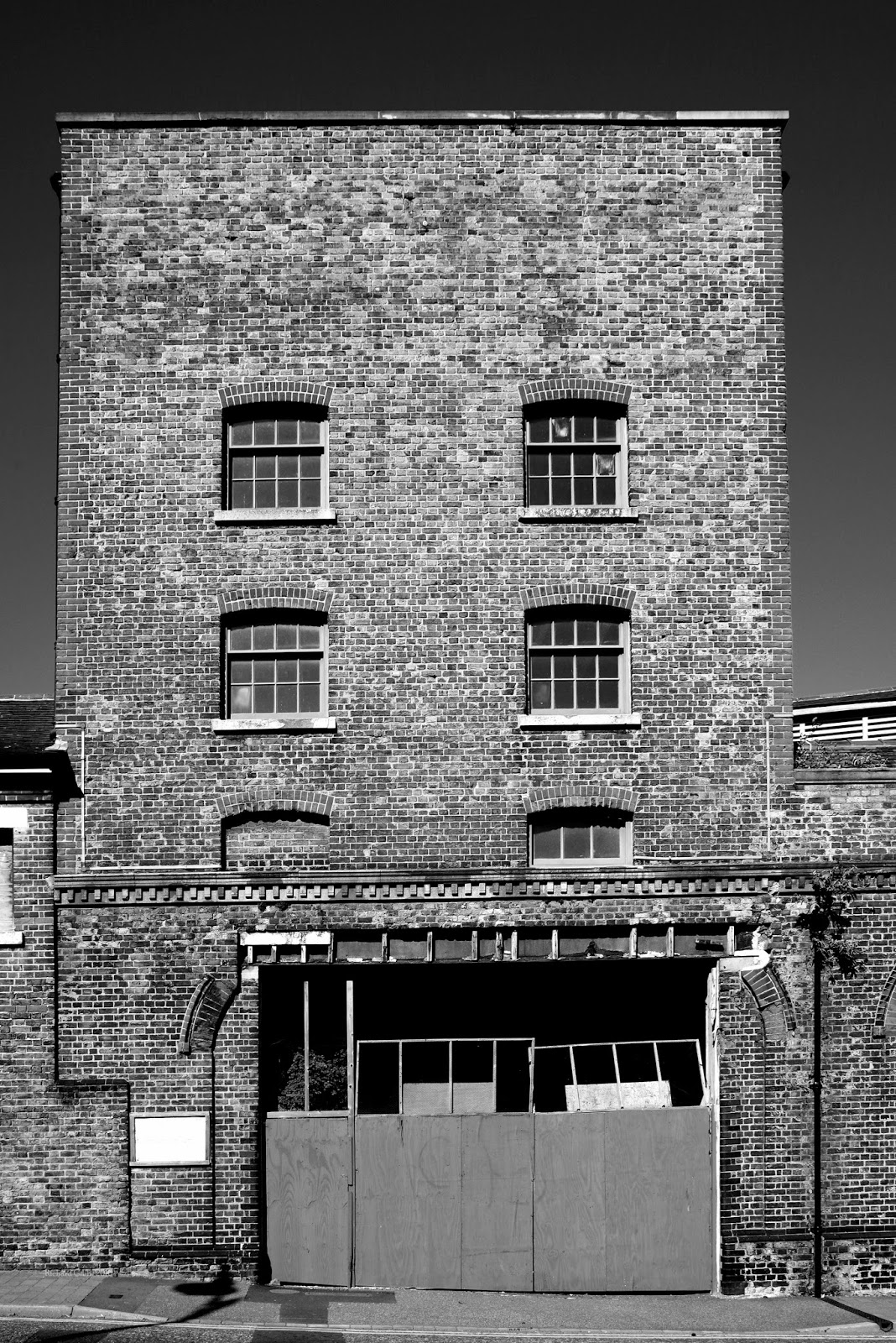 And this notice board has a characteristically victorian injunction to children: 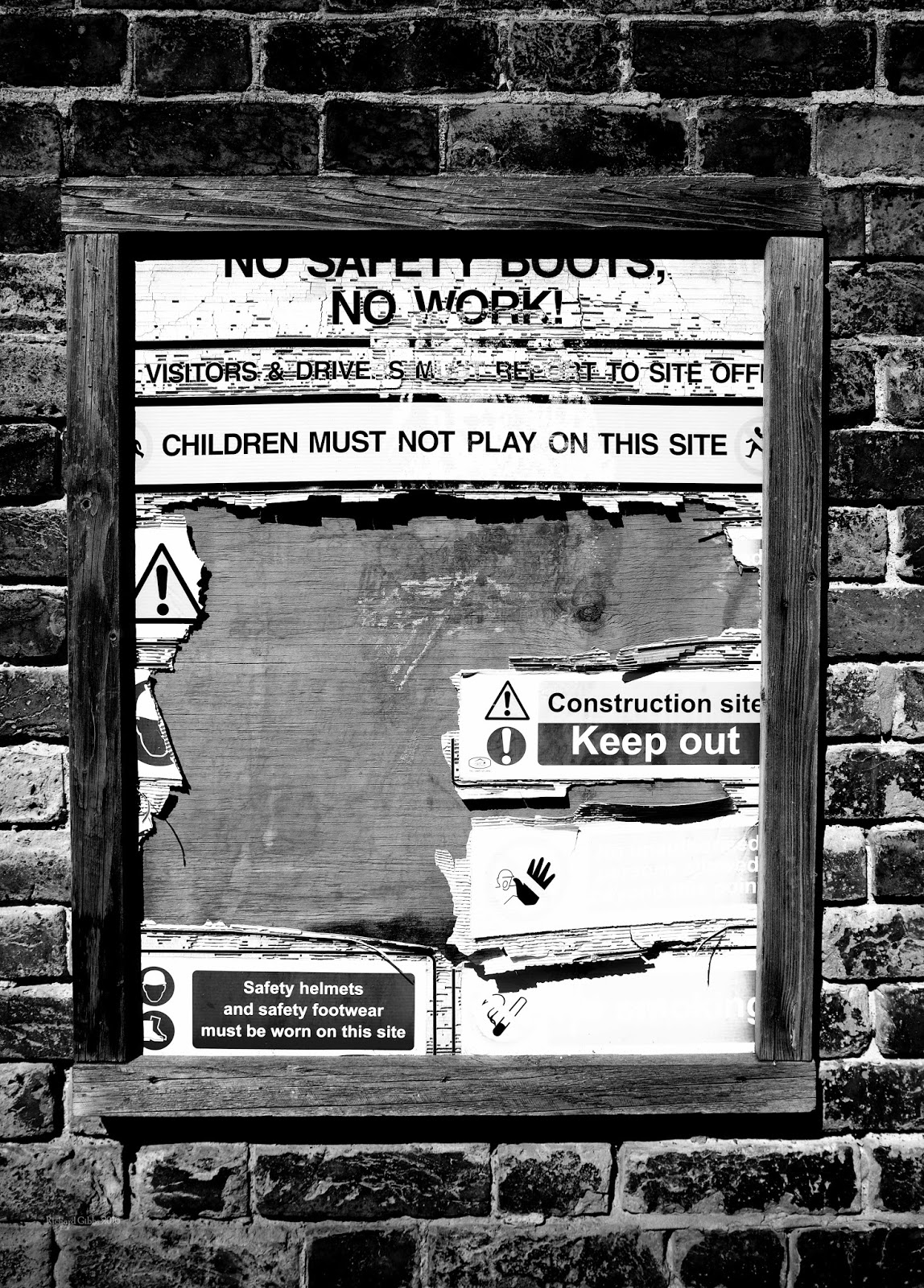 At the end of my visit, on my way to the new £26m railway station, one last shop front catches my eye.  A shop front that may well not be with us long, but one which conjures up a different age.  Perhaps the kind of place Alfred Jingle had in mind in Pickwick when describing Rochester? 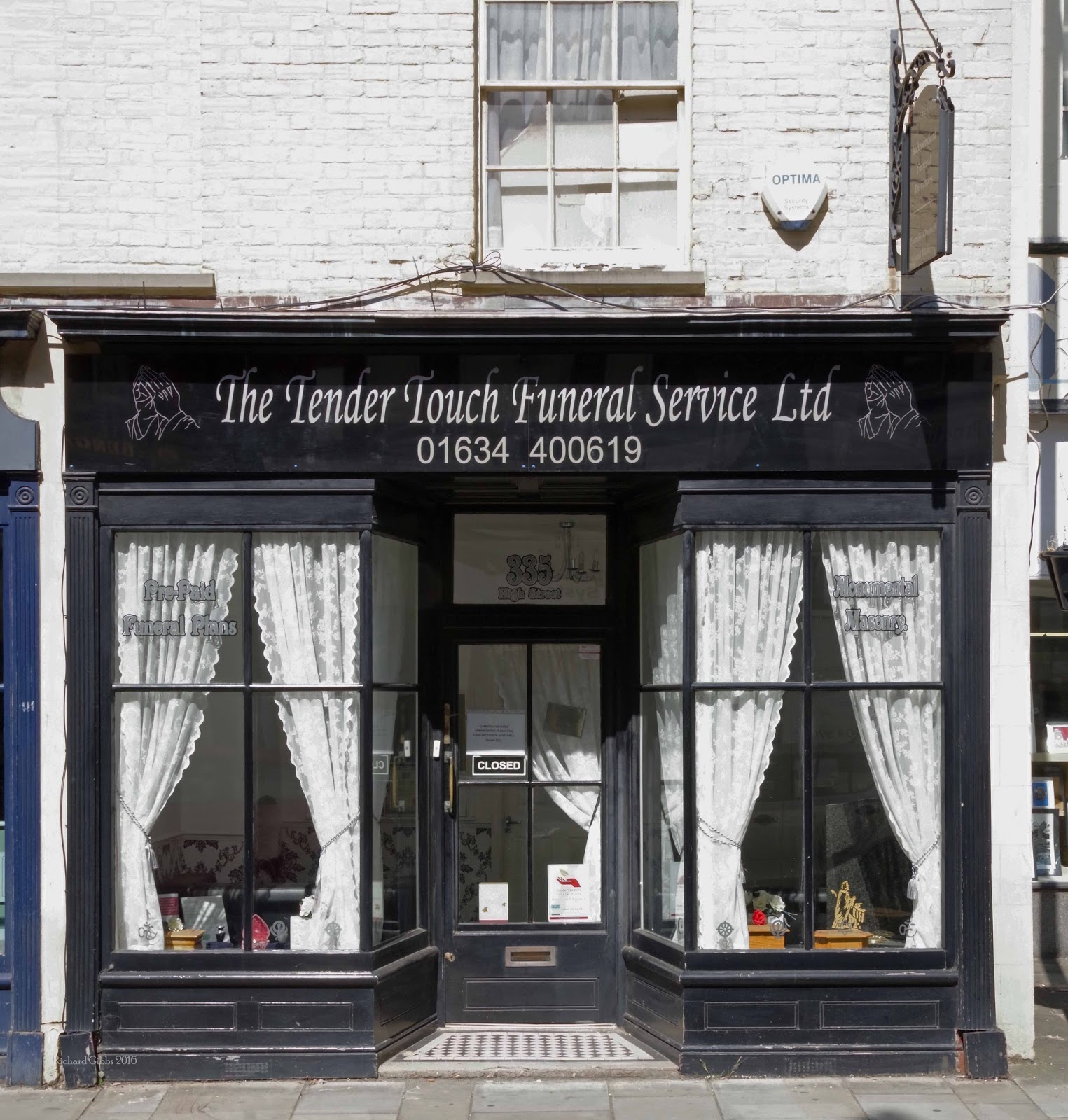 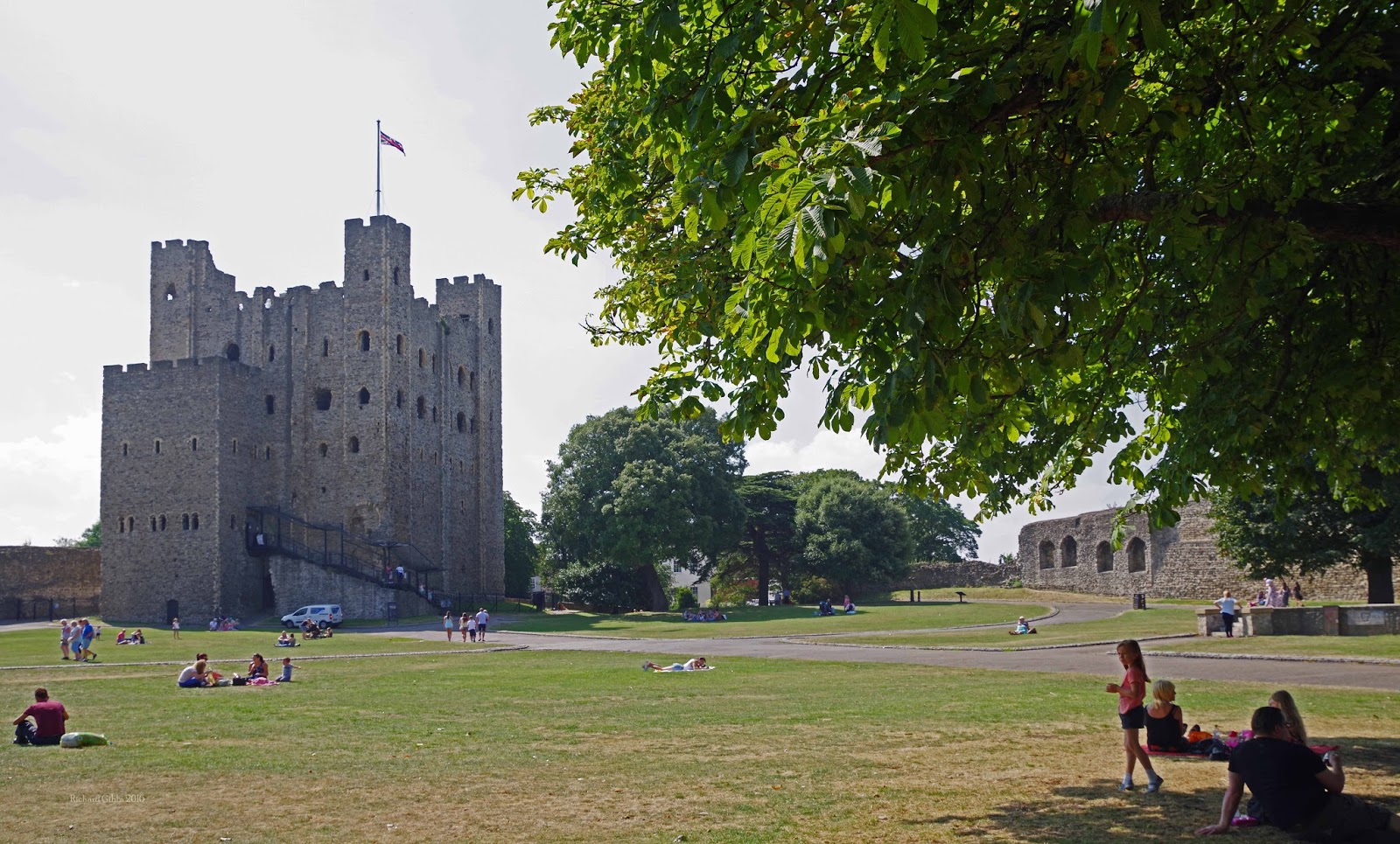 Anythin' for a quiet life, as the man said wen he took the sitivation at the lighthouse..... Sam Weller, The Pickwick Papers

For more about Charles Dickens and London please see: