The memories are short but the tales are long.....

Pure coincidence.  Having never seen anything on TV about since the Beatles played the Star Club in 1962, Rick Stein (the clue’s in the name) beats me there by a whisker. Labskaus (a purée of corned beef, beetroot, onions and potatoes – which transferred by sailors to Liverpool and gave birth to the title scousers), smoked eels and soused herrings are Rick’s fare, though he also gets a merry rendition of  I saw her standing there from a dedicated Beatlefan, who wasn’t even born when Mark Chapman asked John Lennon for his autograph….

Before this, it was Tom Waits who growled about the Reeperbahn on his 2002 album (which was composed in 1992 for ’s Thalia Theatre).  Why would I know this was the ropemakers’ street, recalling such long straight roads in other harbours, and the Ropemaker’s pub in Bridport?

So, pretty much, it was with an open mind (open? empty?) I boarded my delayed Easyjet flight from ugly , to land in unknown territory for 24 hrs.  The to the Hauptbahnhof, Kirchenallee to St Georg, drop off my bag at the Novum hotel, and brave the overcast evening to explore. 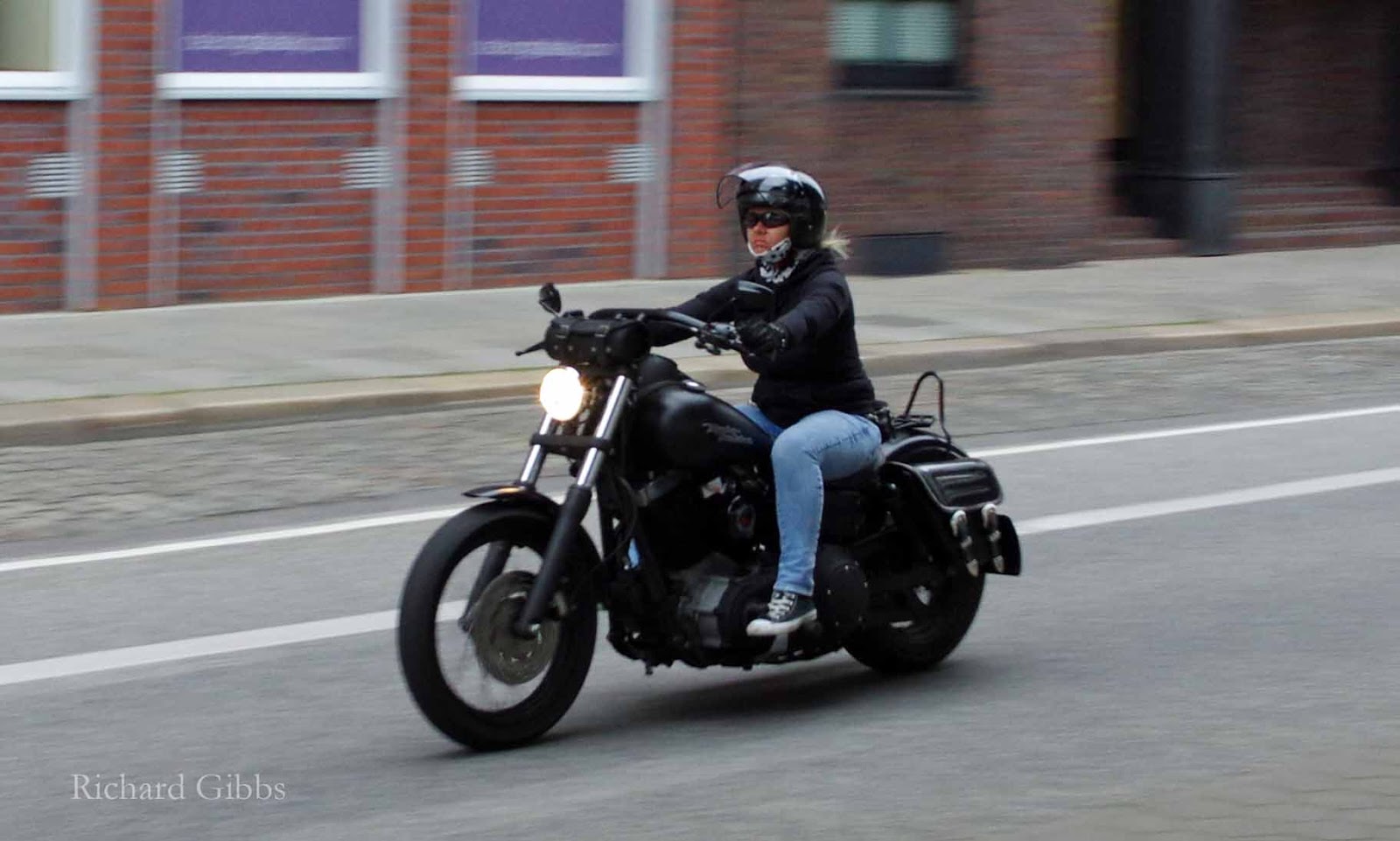 First impressions?  Sunday evening quiet, but, as elsewhere in my universe, contradictions abound, from the sky-scraping steeple of St Petri to the glass and steel of a modern shopping mall; 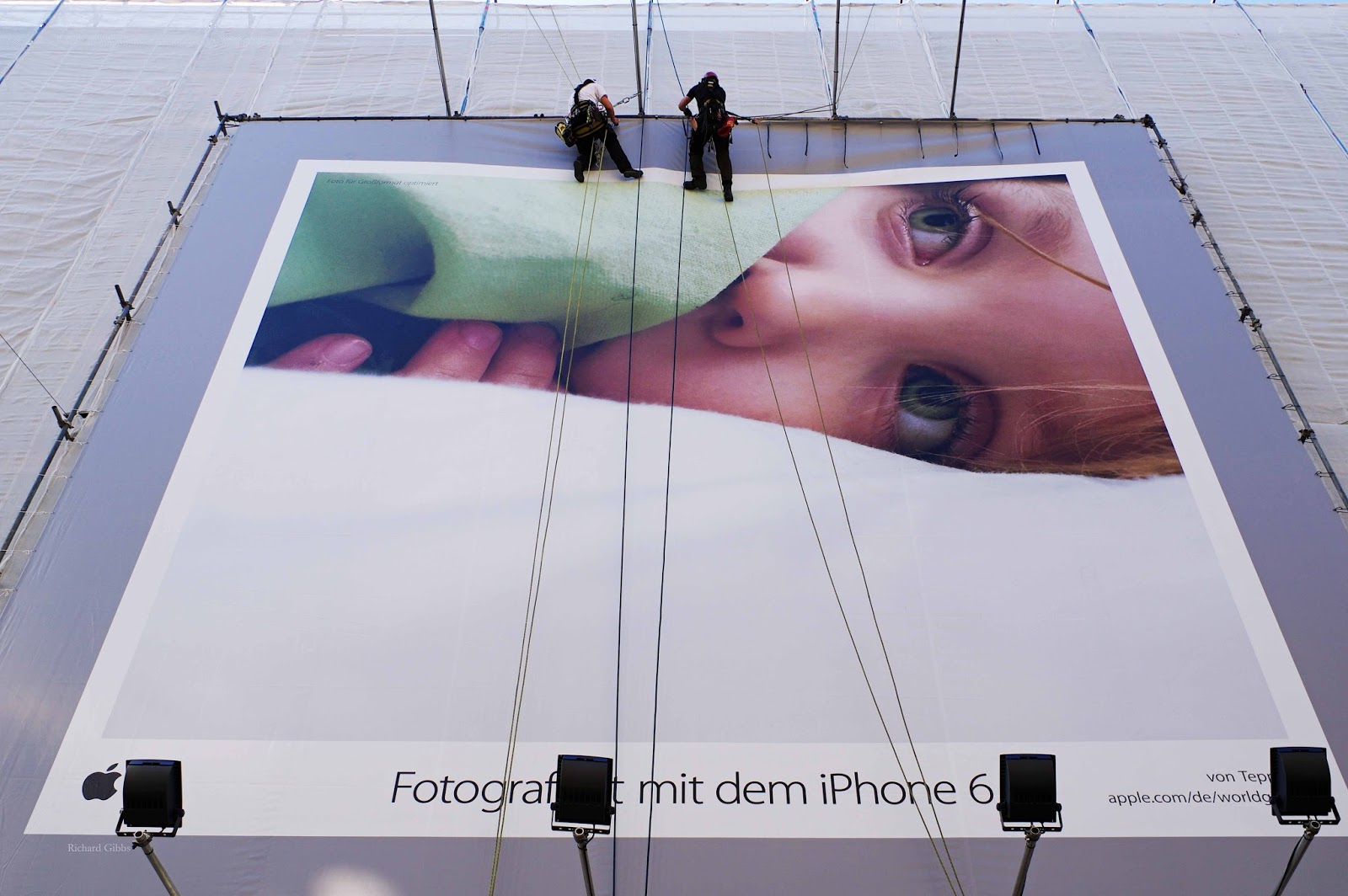 from the nineteenth century excess of the Rathaus, to the temporary bustle of the Stuttgarter Weindorf in the Rathausmarkt. 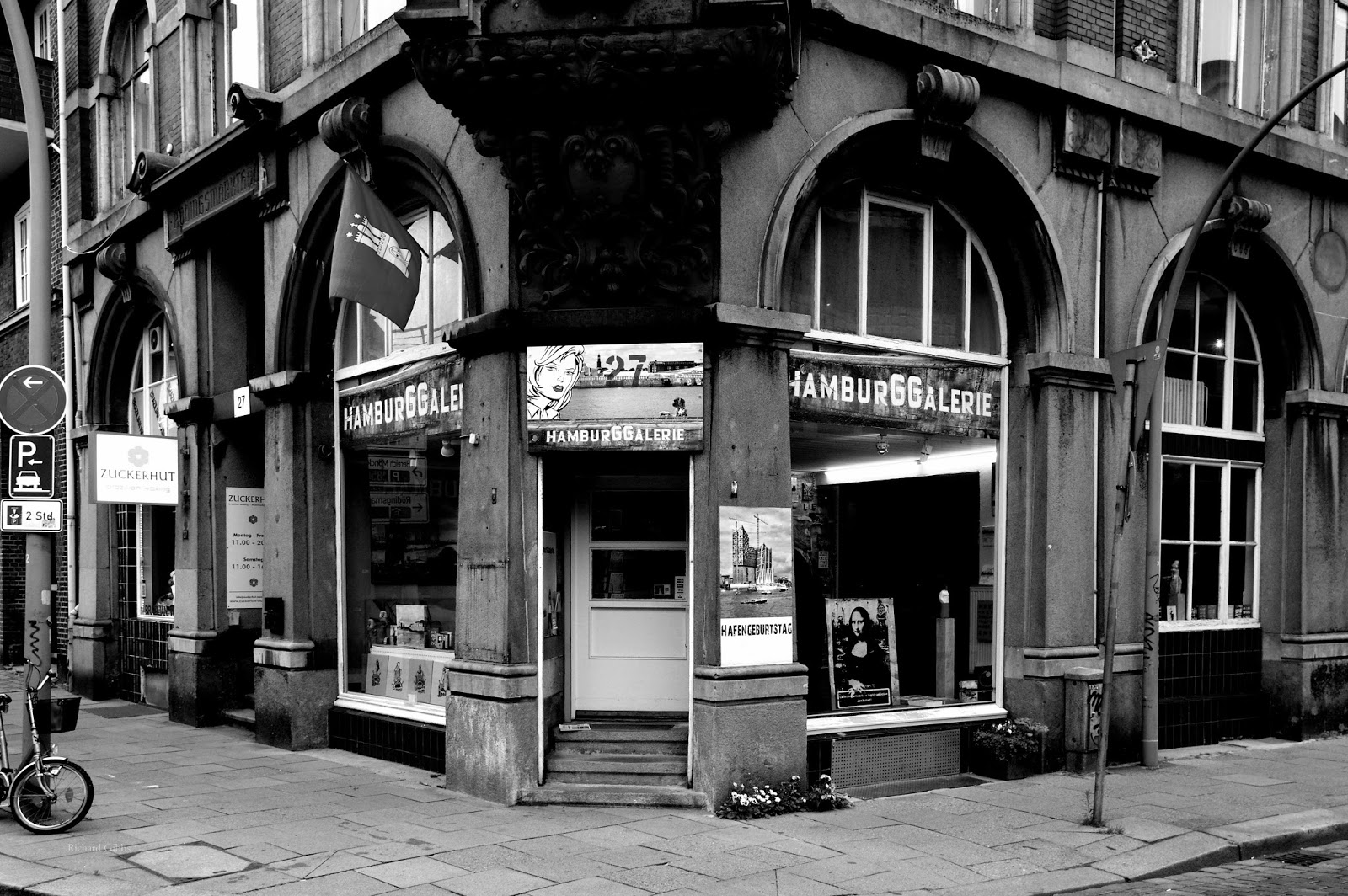 Down towards the Norderelbe, with its traffic of container ships and ferry boats, docks and cranes and fish restaurants along the Landungsbrucken – Matjes with Dill Sour Cream & Bratkartoffeln, a glass of Pils and a Gurkensalat on the side…. 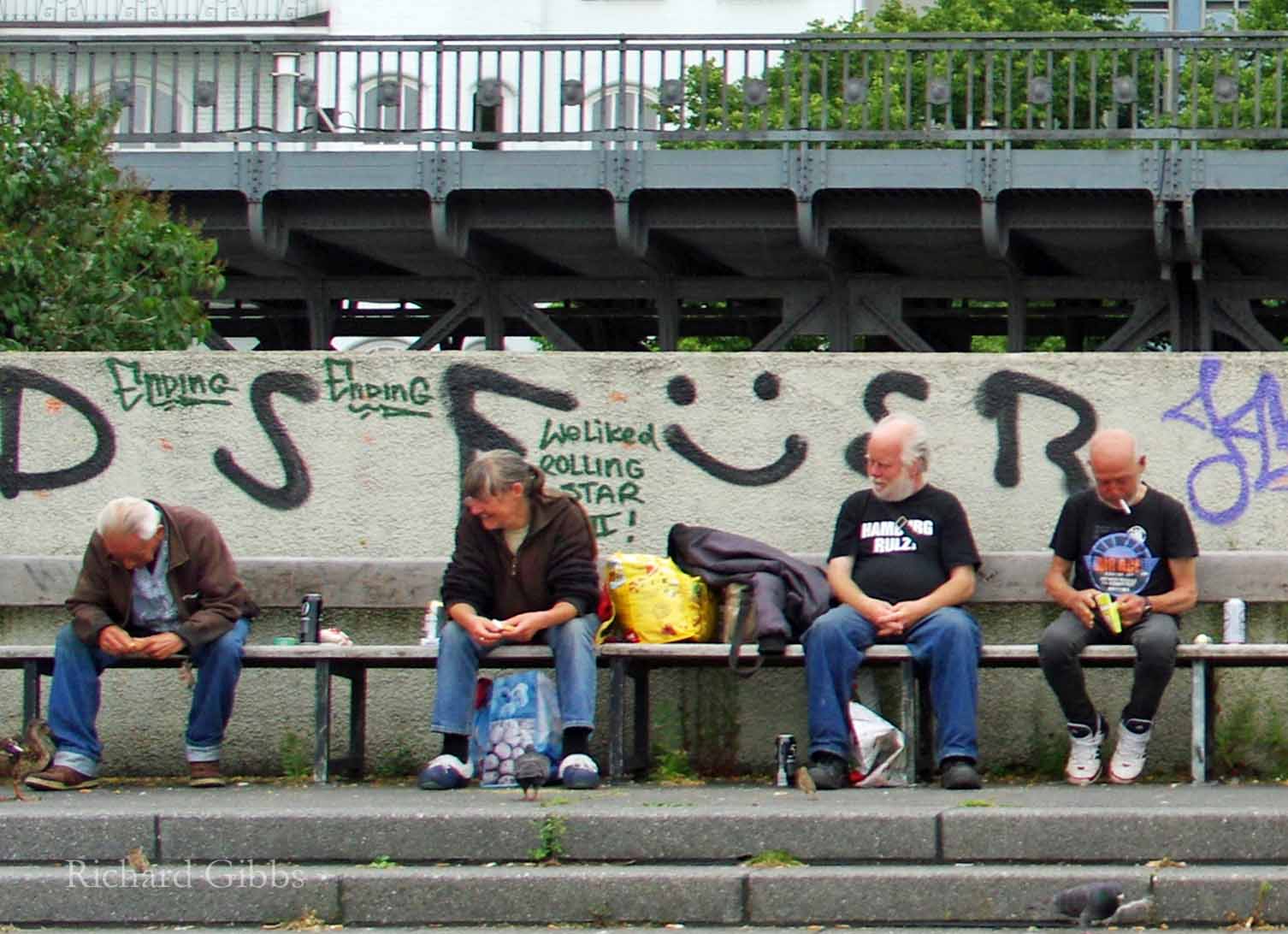 Dusk brings rain drops like flecks of grey sorbet, and the grainy light takes back to the sixties. 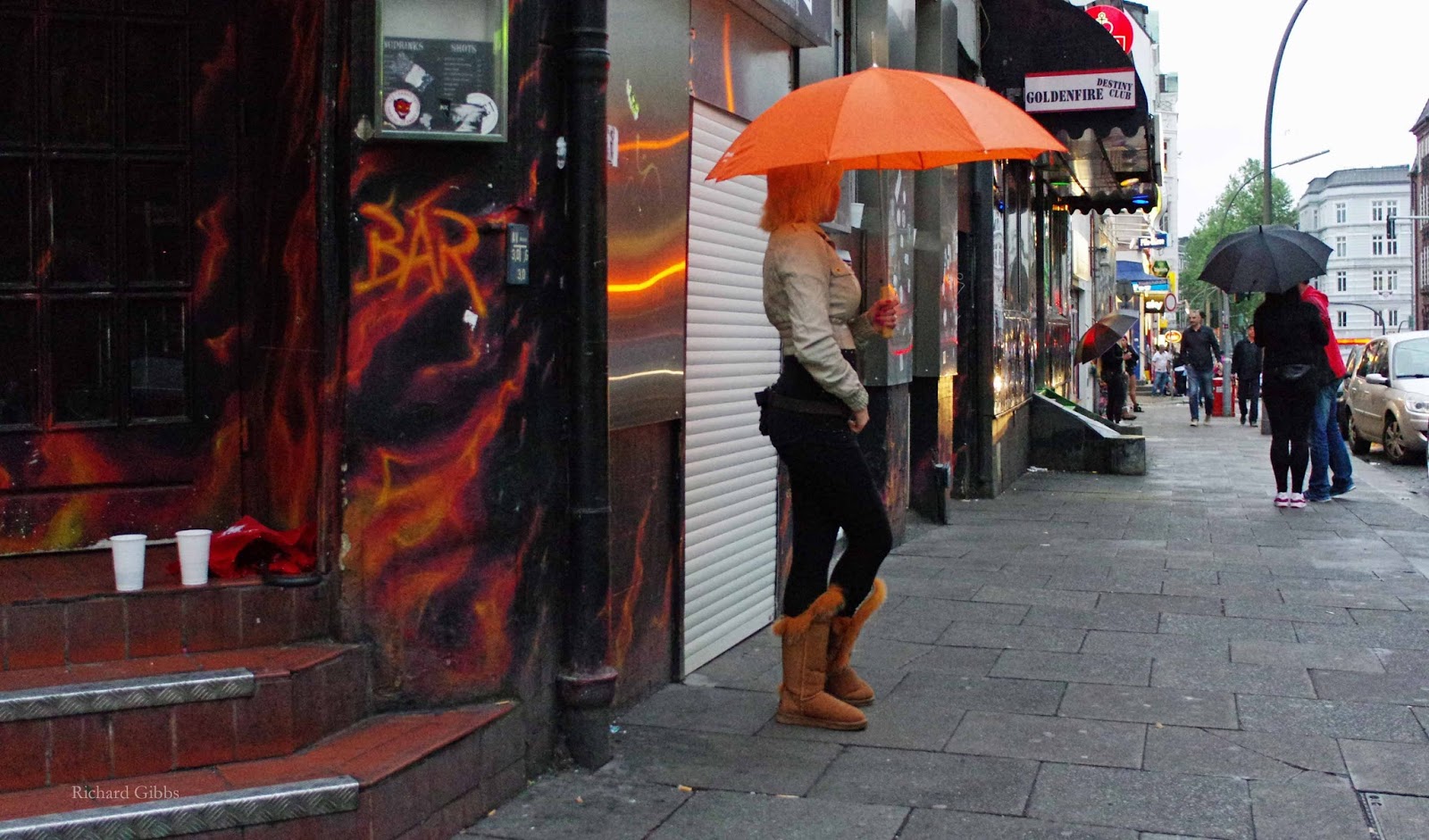 Around the Reeperbahn there is a residue of harbour seediness, pink and orange standing out against the silvers and the blacks of parked Harley Davisons outside the Arcotel Onyx, where the Beatles walk across forever.

106 metres up the of , John Lennon’s I was born in Liverpool, but I grew up in begins to make sense. Somehow Liverpool’s great river and busy docks seem tame compared with this sprawling complex, and somehow the excited laughter and garish neon seem timeless signs of rites of passage that, yes, Martin Luther’s stern bronze stance might disapprove of, but then even St Francis was a young blade once….. 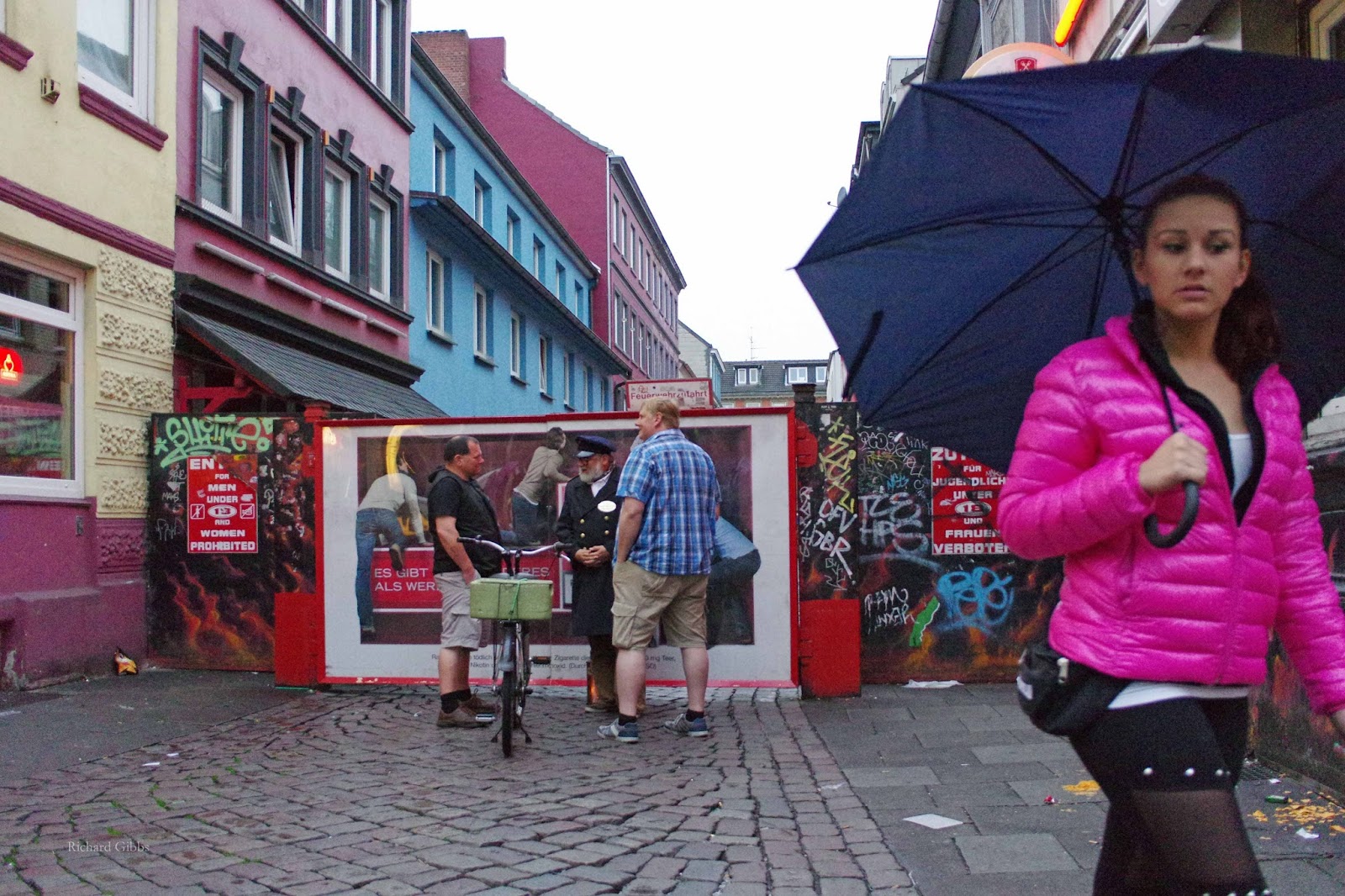 Next morning, blue skies wake me.  The city breaks into a commercial jog as the week begins. 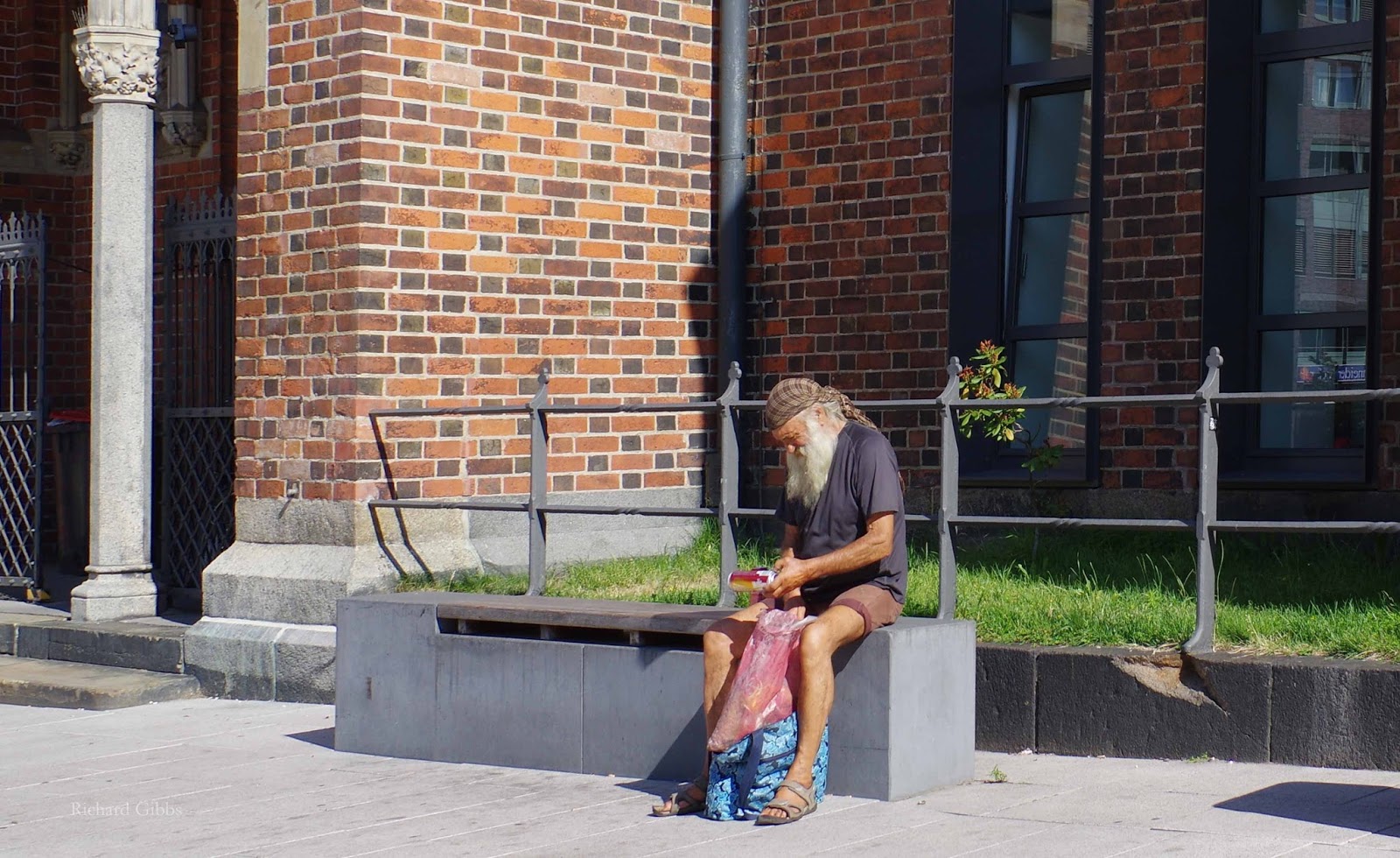 An attempt to smash a shiny IWC Schaffhausen shop window in Neuer Wall attracts a Segway Patroller, a sign that under the city’s shiny surface there is no shortage of contradictions. 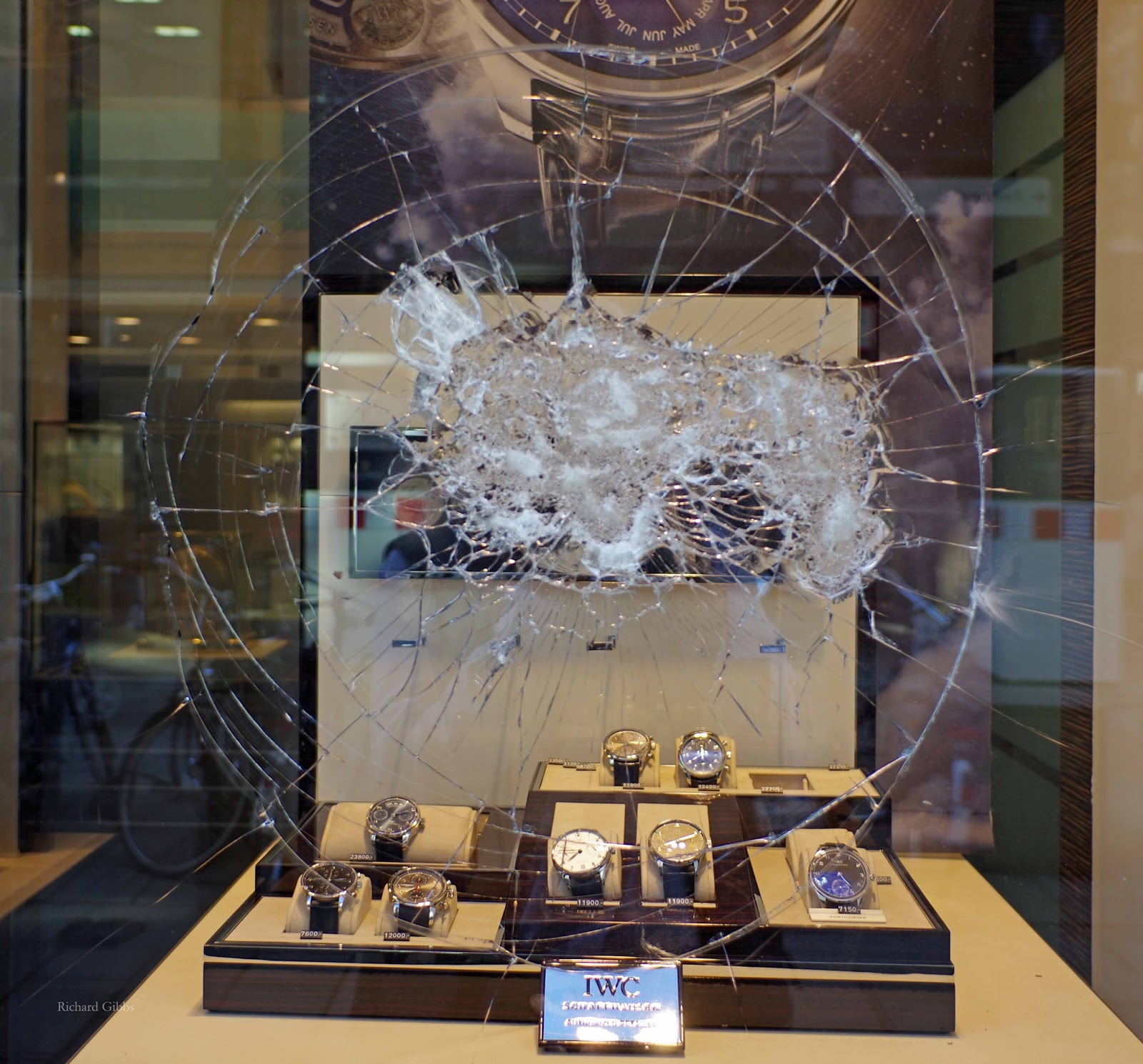 Inside the brass letters recall that Georg Philipp Telemann and CPE Bach were organists here, and that Johannes Brahms was both baptised and confirmed here, despite the fact that the current church is the third on the site, after lightning, careless builders and Arthur Harris's bombers destroyed each predecessor. 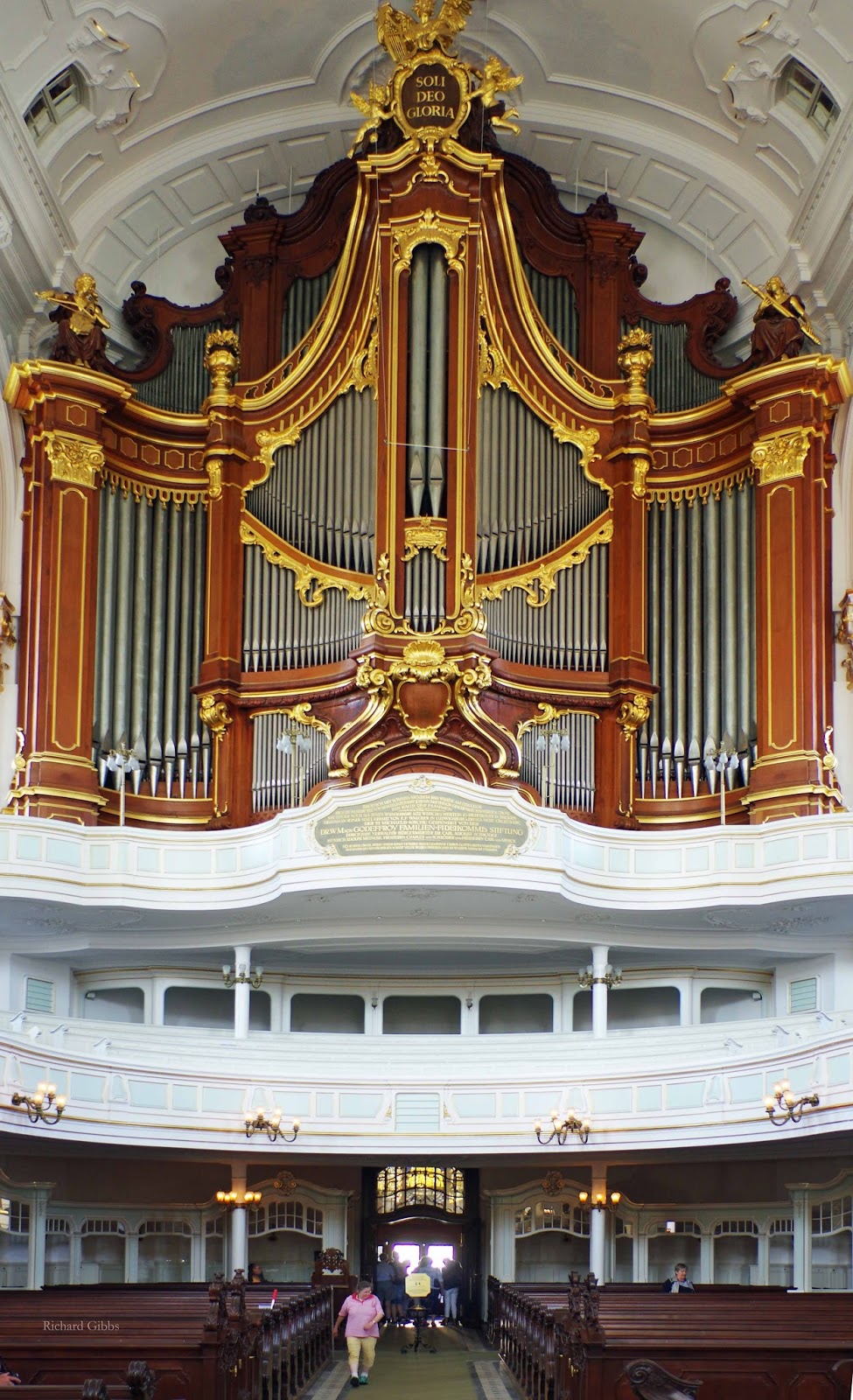 By the river again the great brick warehouses of Speicherstadt remind me of the Albert Dock revitalisation in ,

though the kaffeerösterei here is very hard to beat….. 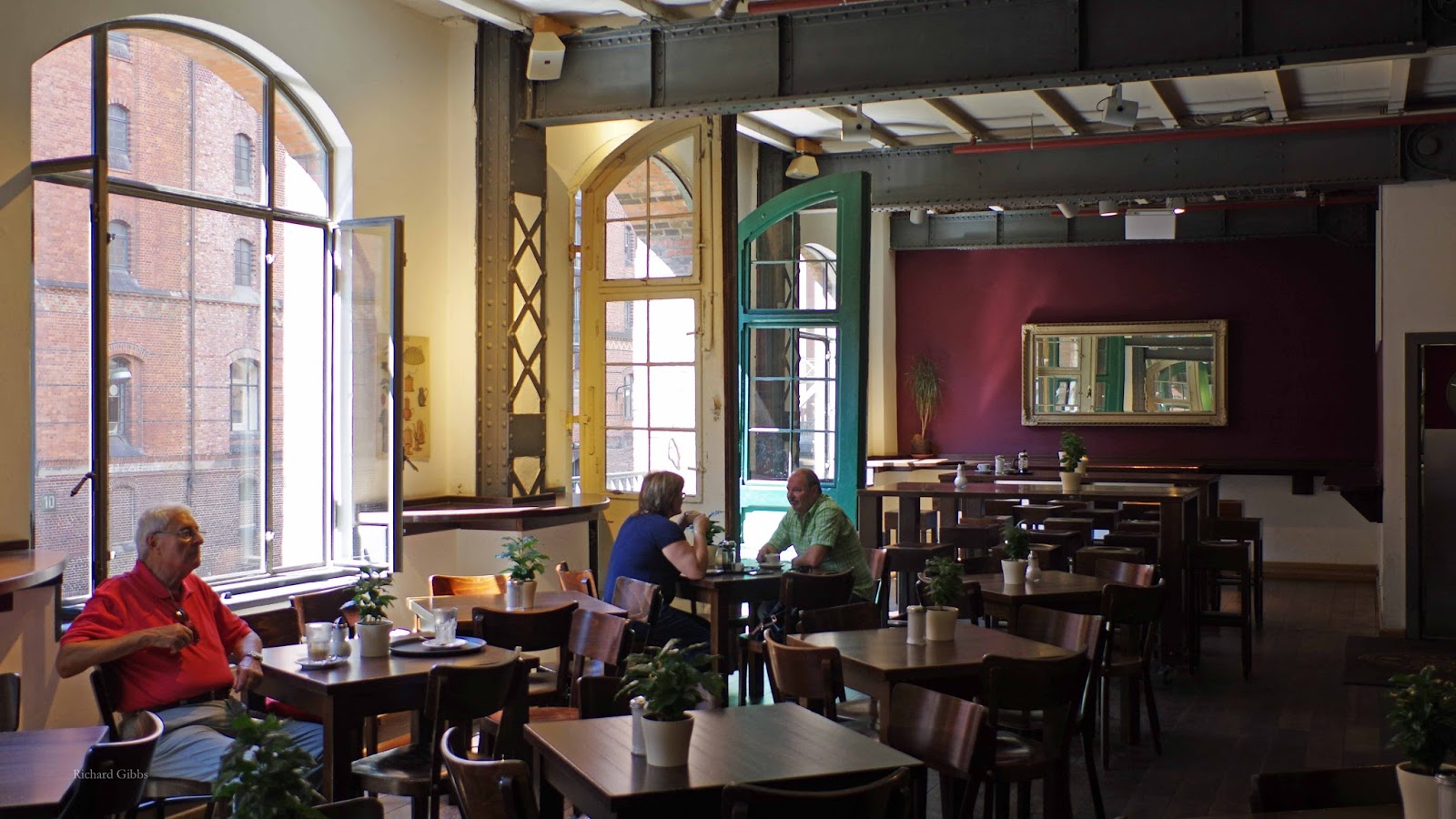 Back towards the centre, passing through the cool whitewash of St Katherinen church, 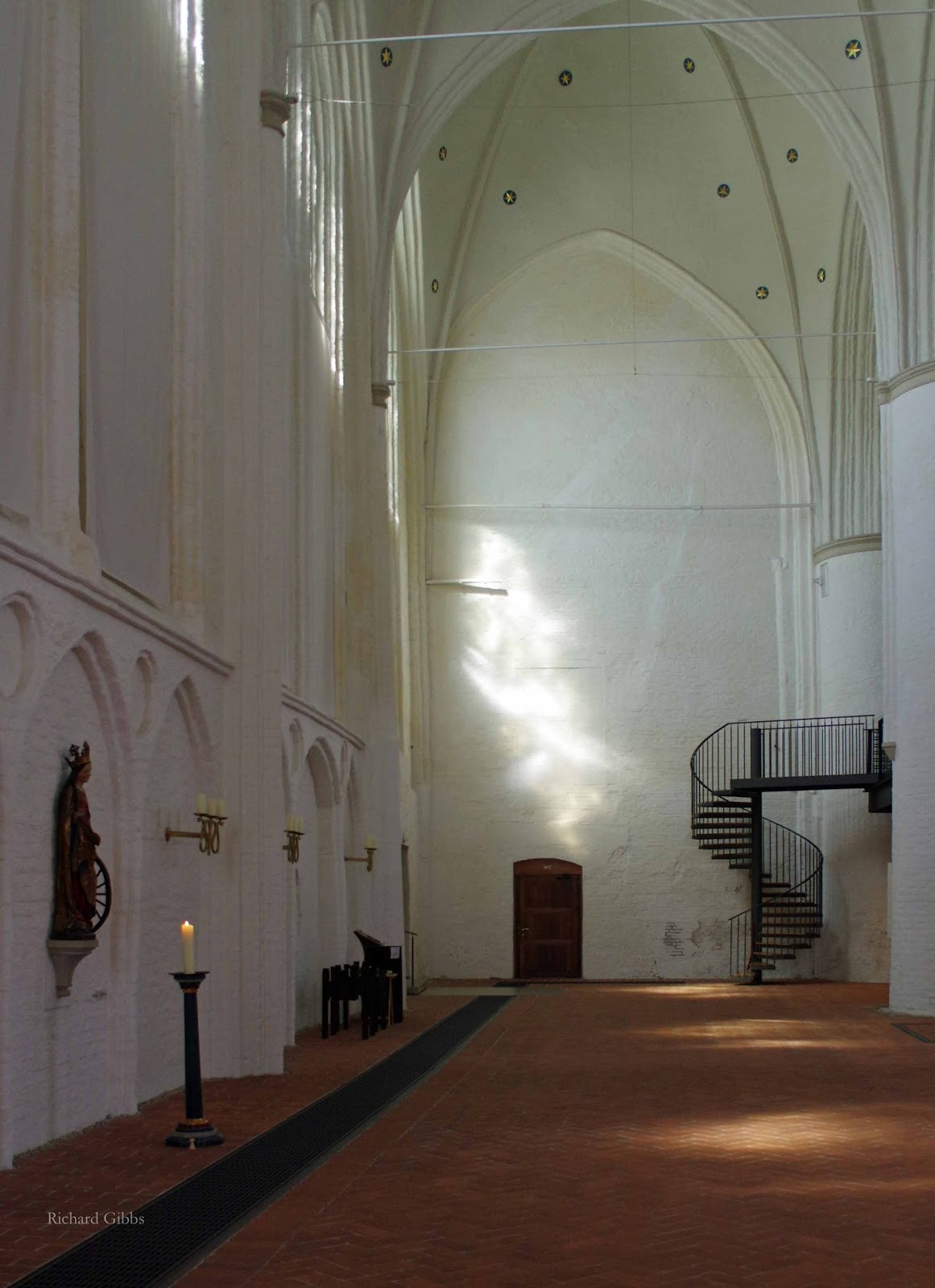 the ruined shell of St Nikolai with its monumental tower stops me in my tracks. 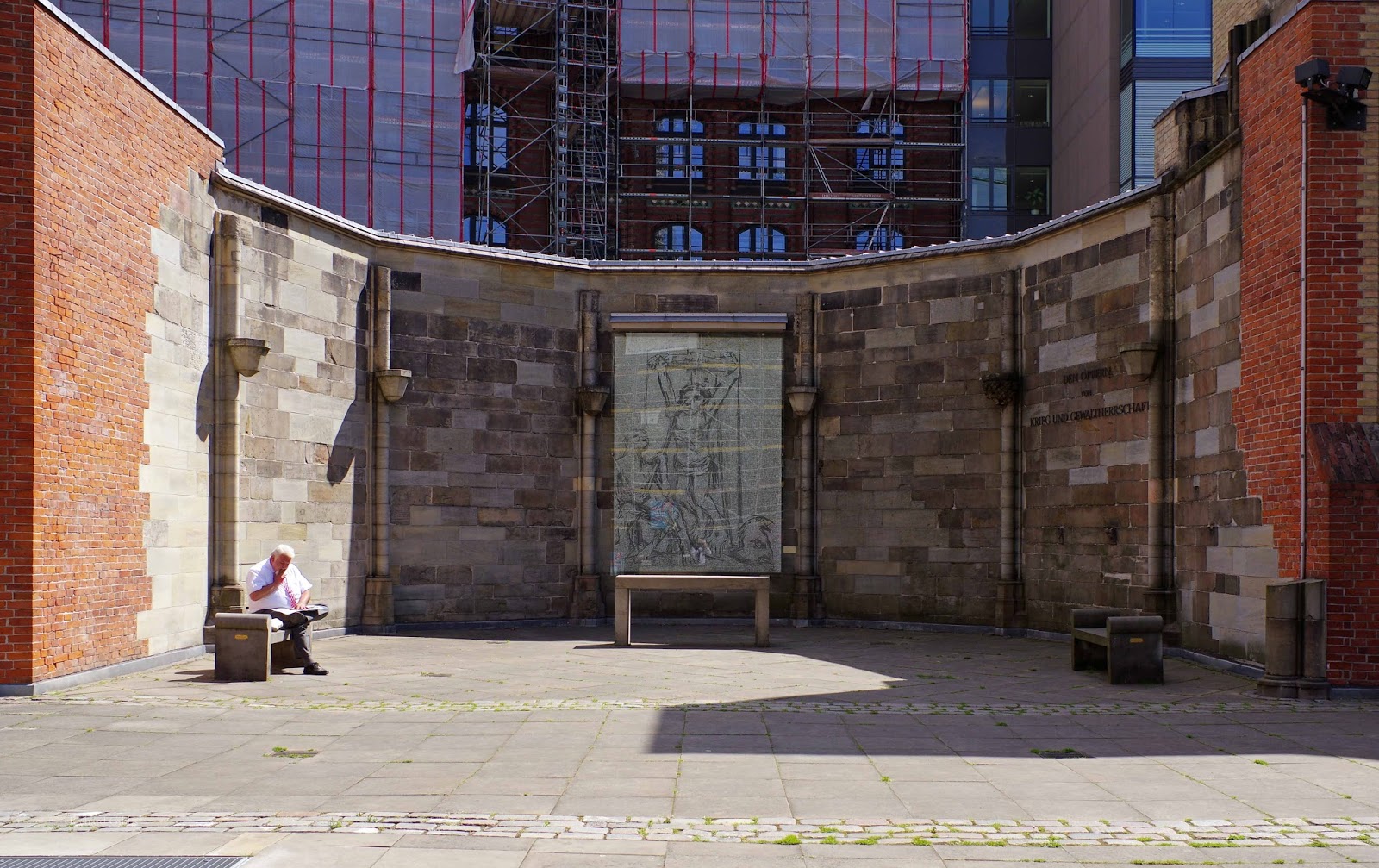 After an earlier church was destroyed in the great fire of in 1842, George Gilbert Scott (of the Midland Grand Hotel, St Pancras, and the Albert Memorial) was commissioned to reconstruct this.  His spire, at 147.3 metres, was, from 1874 to 1876, the tallest building in the world, and it is still the second tallest tower in .

Unfortunately this landmark stood out for allied bombers and on July 28th 1943 the church was destroyed, though the tower survived, and remains as a memorial to the bombings.  A glass lift flies me up 75.3 metres to a platform where panels display historical information. 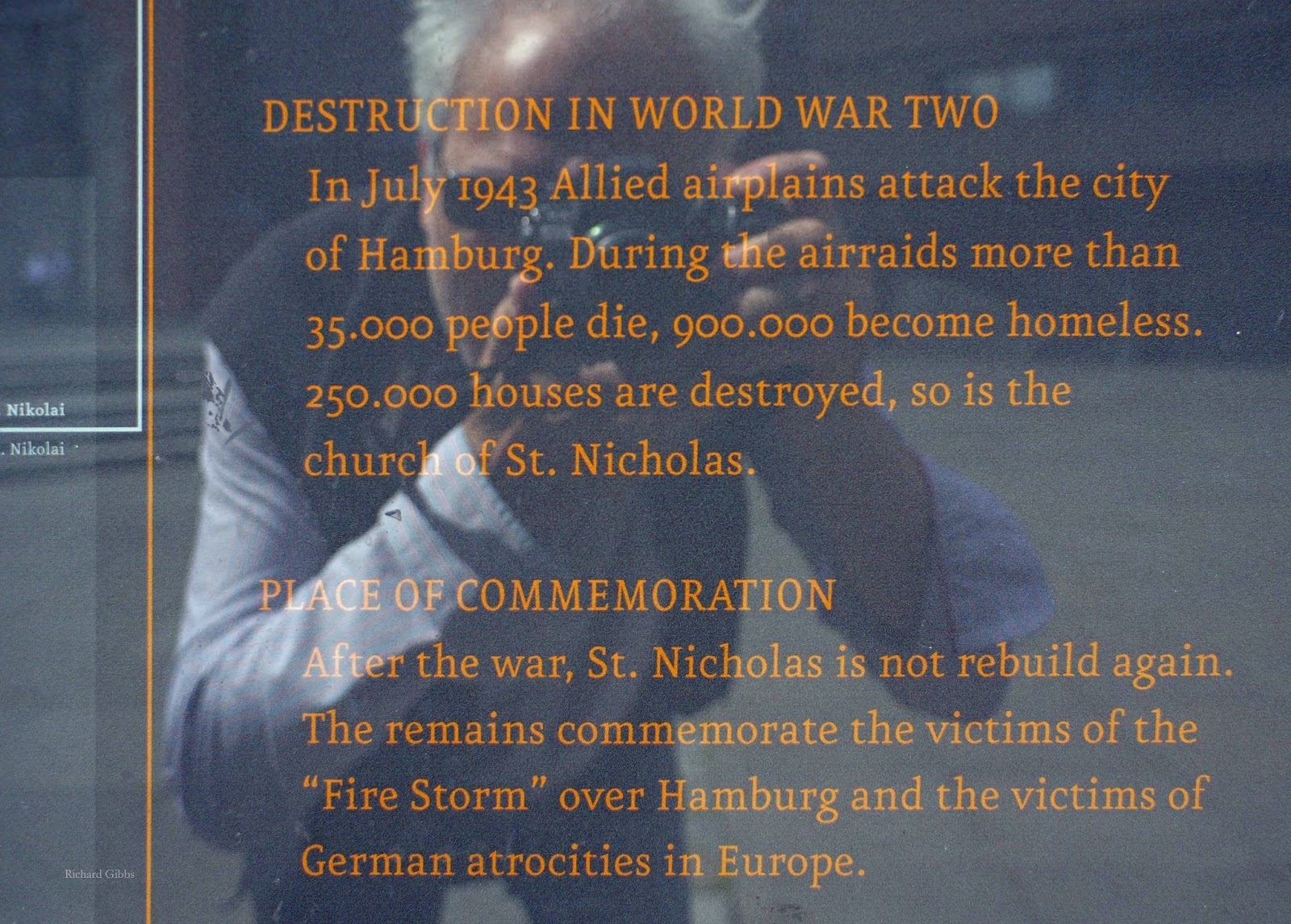 I never got beyond the Star Chamber in history at school, and though my youth was full of war stories, bombsites, air raid shelters, and Duke Ellington playing at the rebuilt cathedral in , I had little idea of the destruction suffered in .

Photos of the blitz, and films such as In Which We Serve, coloured my childhood in black and white, but it wasn’t until I encountered Kurt Vonnegut’s novel Slaughterhouse-Five in the 70’s that I had any idea of what happened to European civilians during WWII. 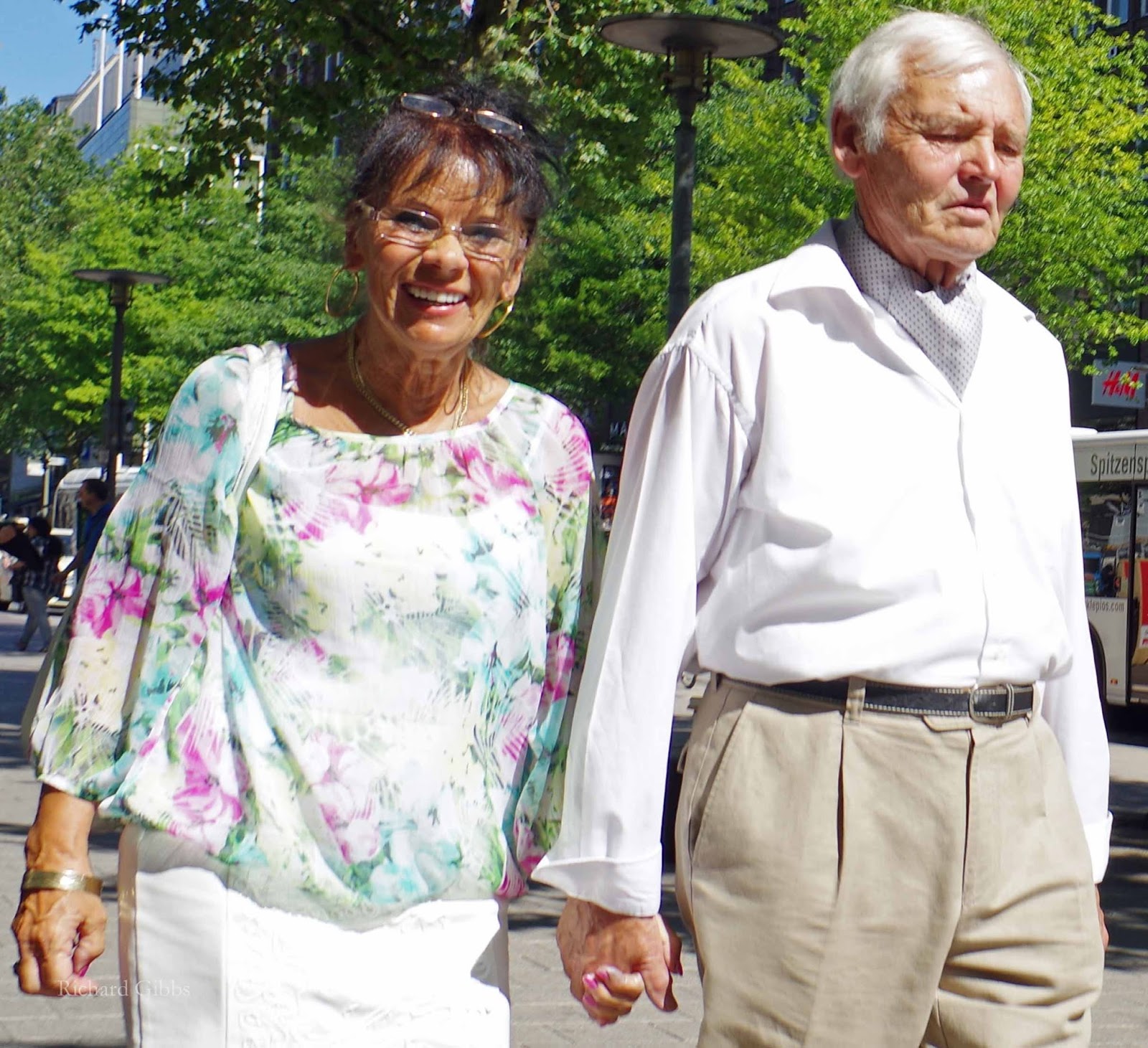 Here in , between July 25th and August 3rd 1943, the RAF bombed residential districts by night while the USAF bombed the shipyards and factories by day.  A plaque here in St Nikolai dispassionately tells the story:  ‘Operation ’ reduced large parts of the city to ashes.  35,000 people died in the flames, among them thousands of slave labourers who had been deported to from other European countries and over 5,000 children.  Around one million of its inhabitant fled the city, and the number of injured people is estimated at 120,000.

I don’t know what I'd expected to find in .  My ‘open’ mind thought of Pete Best and seventeen year old George Harrison honing their skills in clubs in the ‘60s, and Rick Stein skoffing Labskaus in the Old Commercial Room, but I suppose I came with a Basil Fawlty attitude to not mentioning the war…. 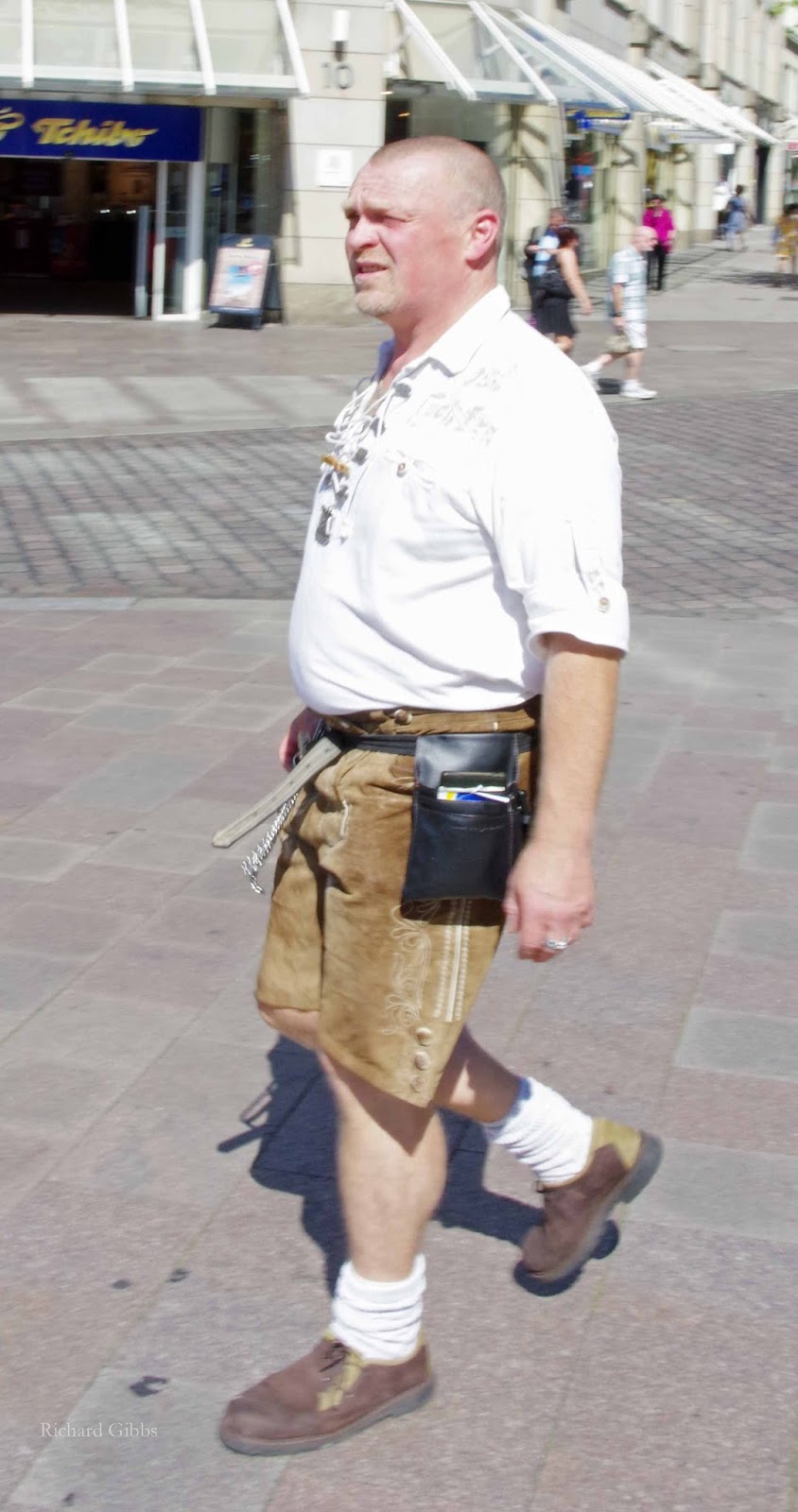 The information high in Gilbert Scott’s tower goes on:

These images of destruction remind us of the cruelty which Nazi spread all over with its war of aggression and annihilation.  It has been rightly pointed out that the carpet bombings of residential areas were in breach of international law, cruel, and not the right instrument for breaking the German masses’ loyalty to Hitler.  However, the fuse for the firestorm was lit in .  The German air-raids on (1937), (1939), and (1940), (1941), and many other cities in Western and Eastern Europe preceded the destruction of .

Discomfort is not the word. Shame for my ignorance. But these are tempered by admiration for the way this information is stated.  If only every school had a copy of this…..

The original catastrophe occurred ten years earlier, in 1933, when then the National Socialists with the support of large parts of the elite and the population abolished democracy and the rule of law within a matter of weeks.  This catastrophe was to bring on all the other tragedies that followed, such as the air-raids and later the expulsion of the German population from Eastern and Central Europe as well as the partition of .  Ultimately, the dead, injured and homeless of the air-raids, too, were victims of Nazi ’s politics of aggression, its claim for world domination and its barbarisation of war. 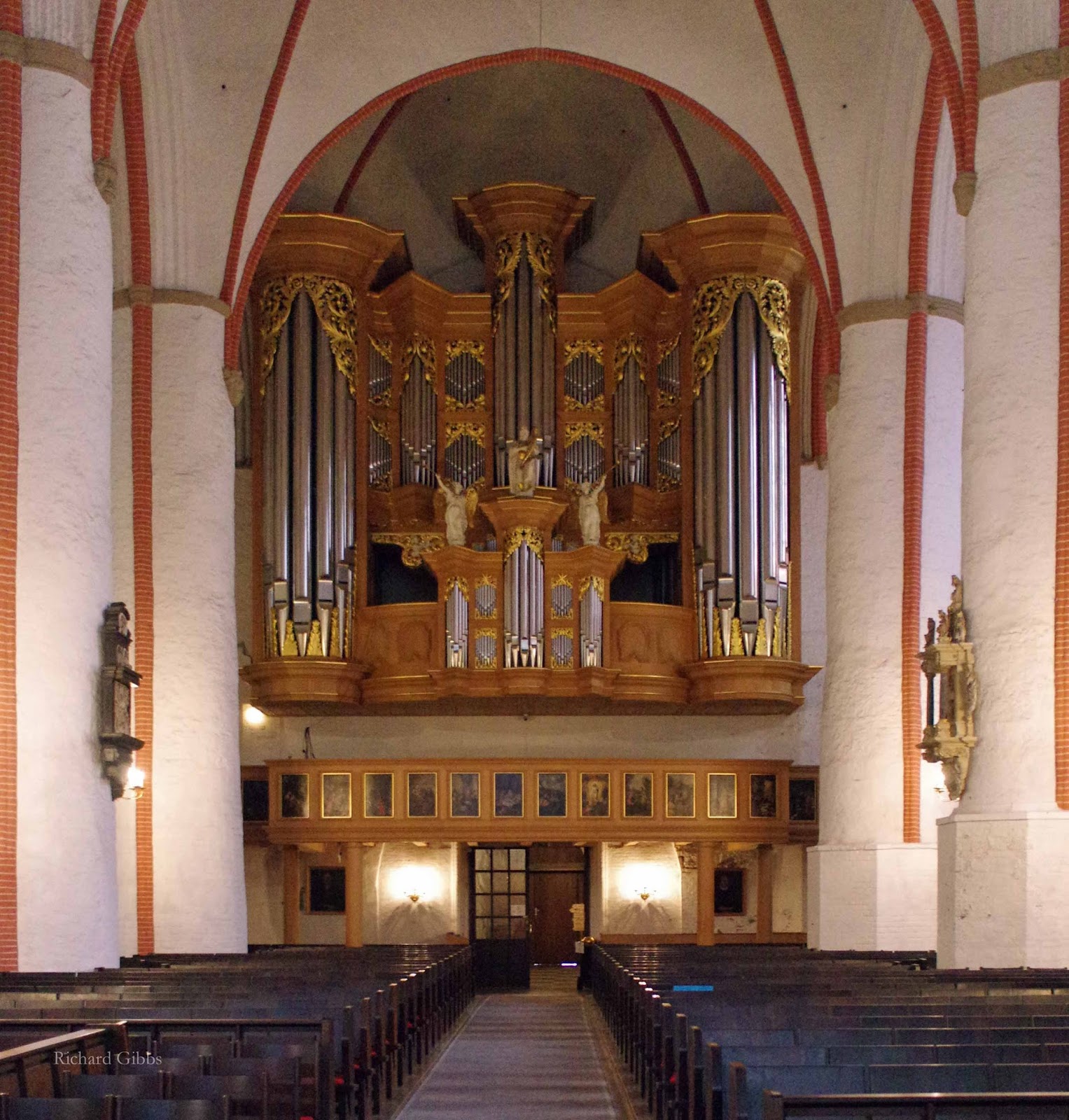 Not far away, having admired the organ that J S Bach once played in St Jakobi, on Steinstrasse (Rick gets everywhere), I meet Dietrich Bonhoeffer, a Lutheran Pastor, whose execution in Konzentrationslager Flossenbürg for opposition to the Nazis was carried out on April 9th 1945, just three weeks before Hitler's suicide. 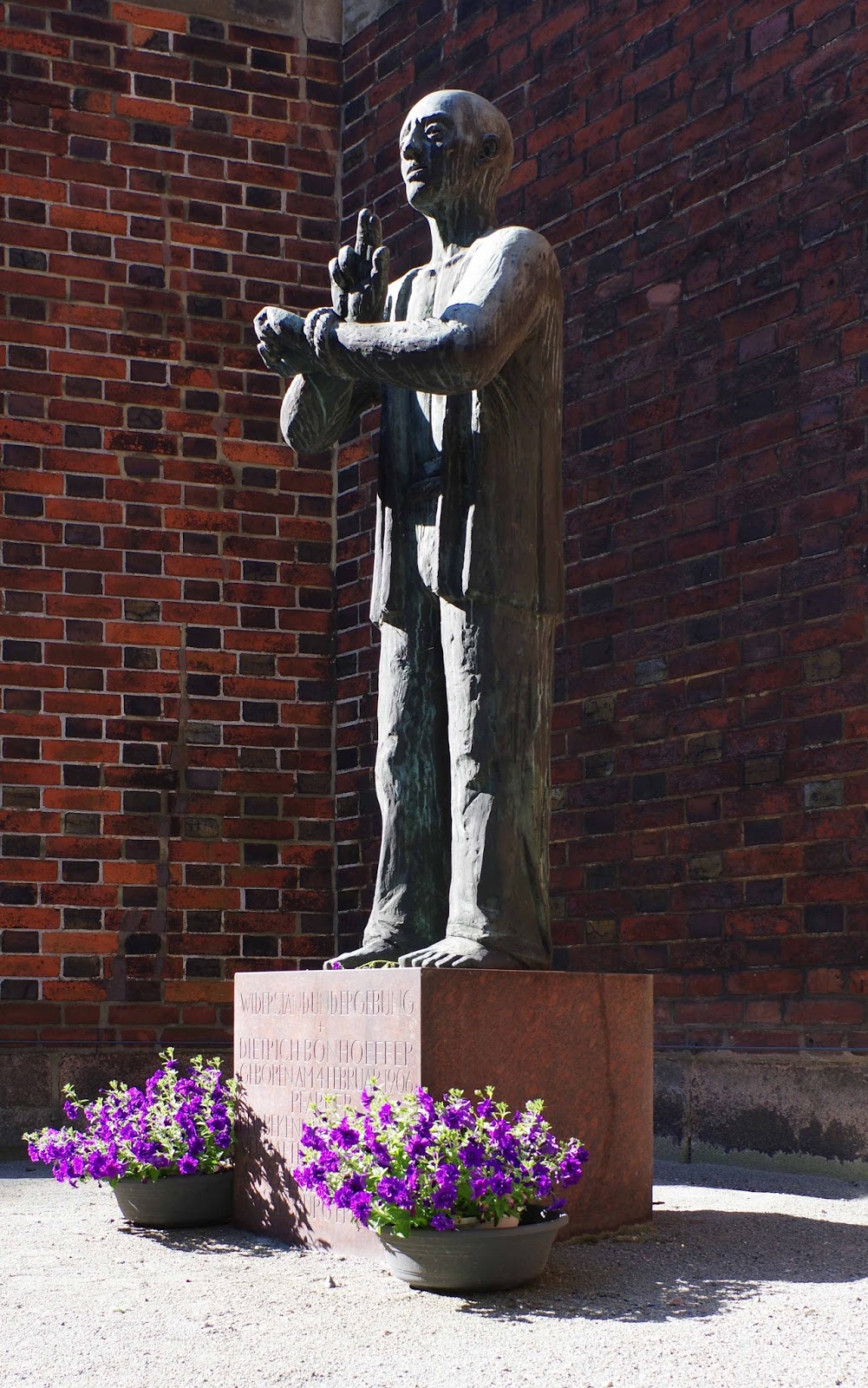 A sculpture by Edith Breckwoldt, entitled The ordeal, sits within the shell of St Nikolai, with these words from Bonhoeffer inscribed below:

No man in the whole world can change truth. One can only look for the truth, find it and serve it. The truth is all places. 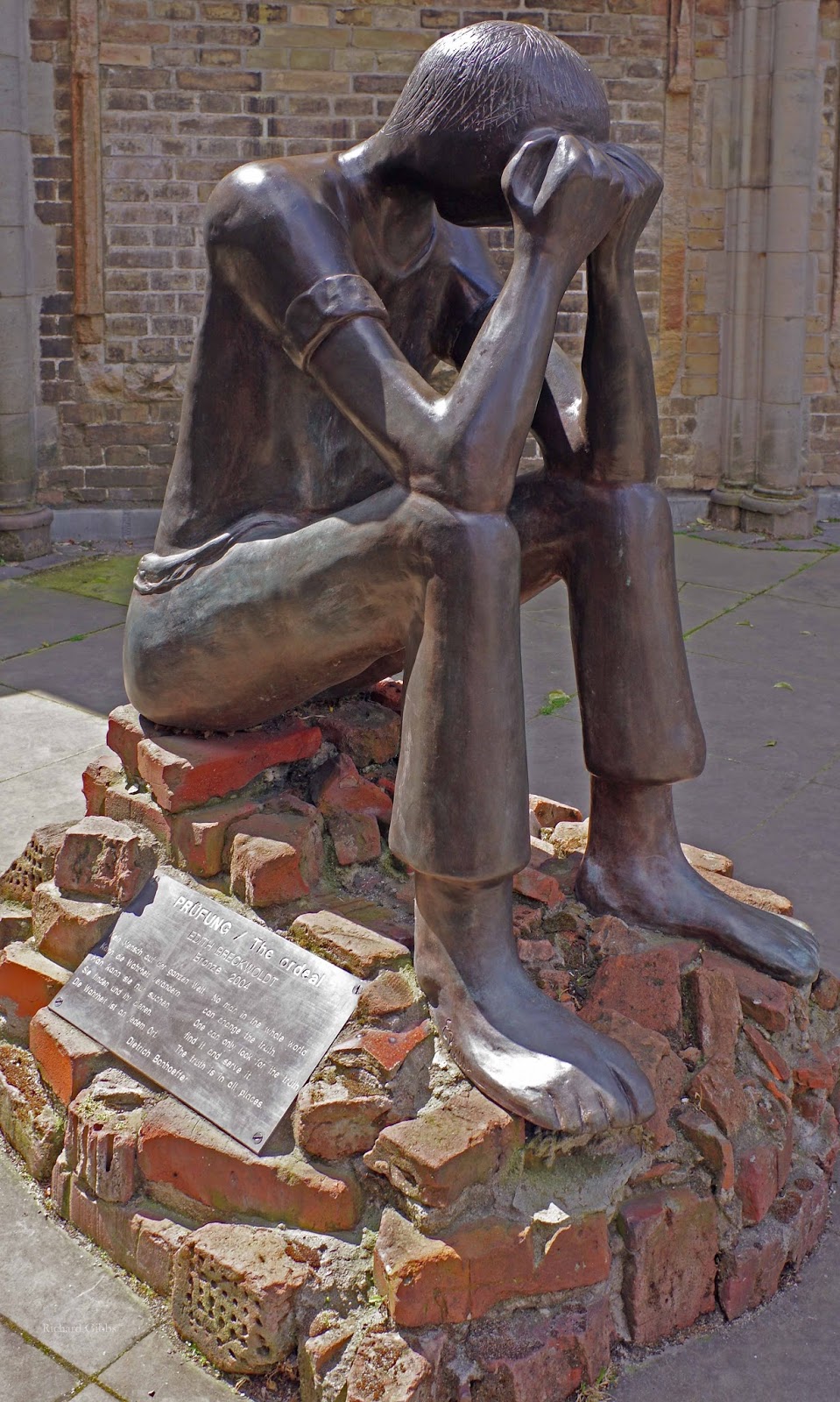 I had not anticipated this on the Easyjet flight from , but the contradictions of this great city smile on under a blue sky. 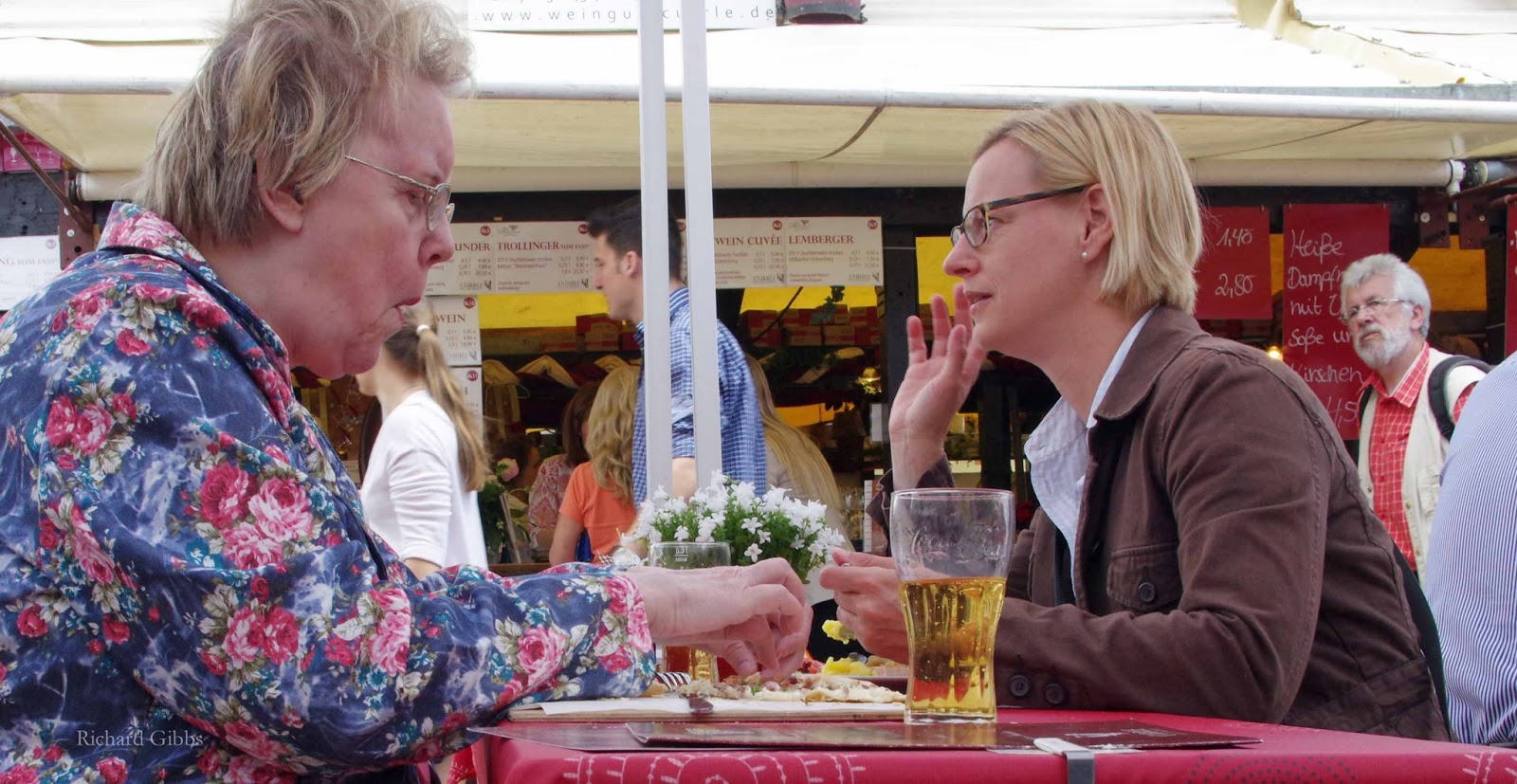 Stuttgarten Riesling vom Fass and Bratwurst mit Kartoffelsalat revive the stunned spirits, and the exuberance of Hamburgers all around, whether in love,

or just in company, 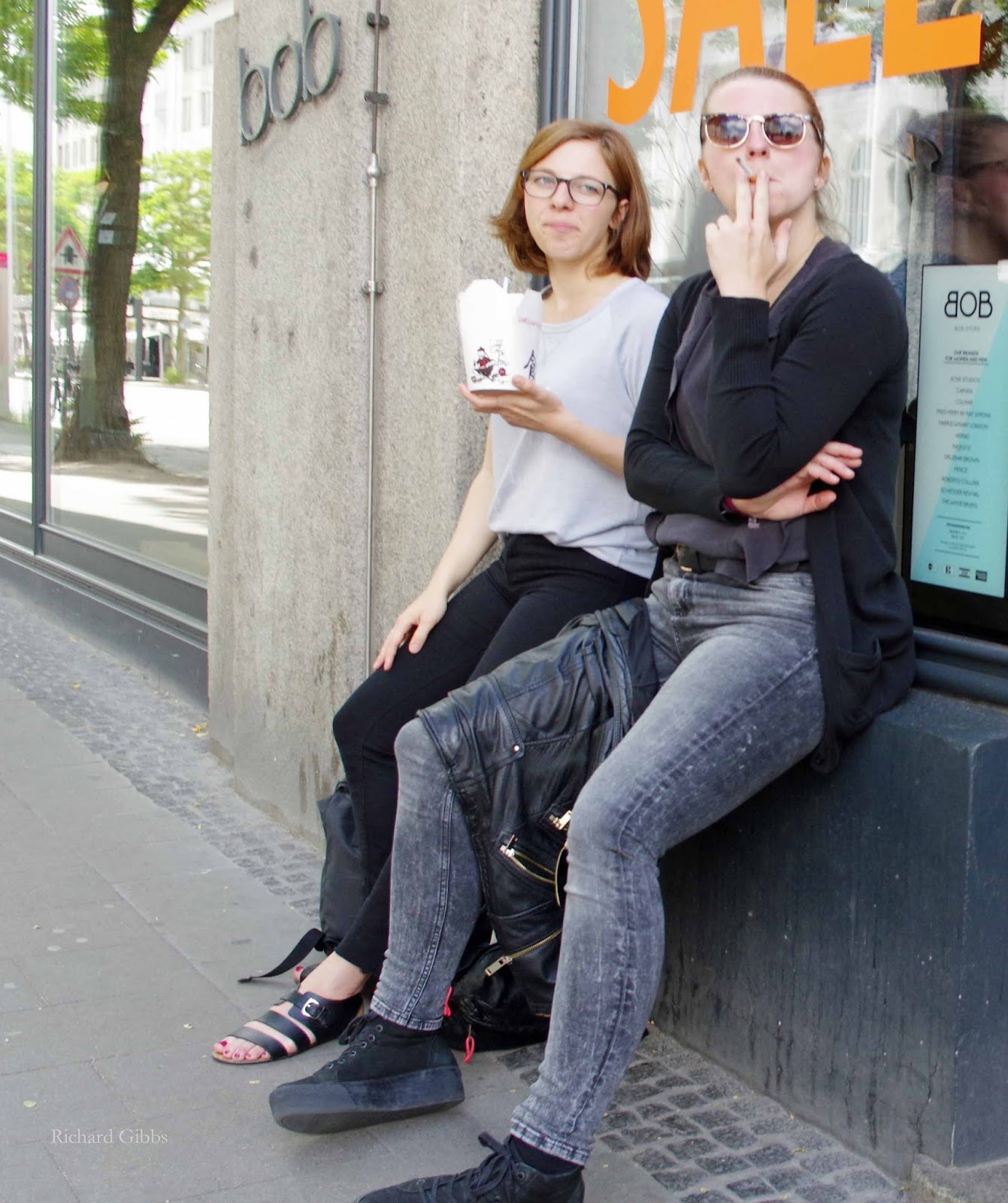 On the S-Bahn back to the airport, reluctantly moving away from the city, I note a young woman’s bag carries a quotation from Samantha Kingston, the girl who dies, repeatedly, in Before I fall, by Lauren Oliver.  She would probably be puzzled to be linked to Tom Waits, but no one puts flowers on a flower’s grave….. 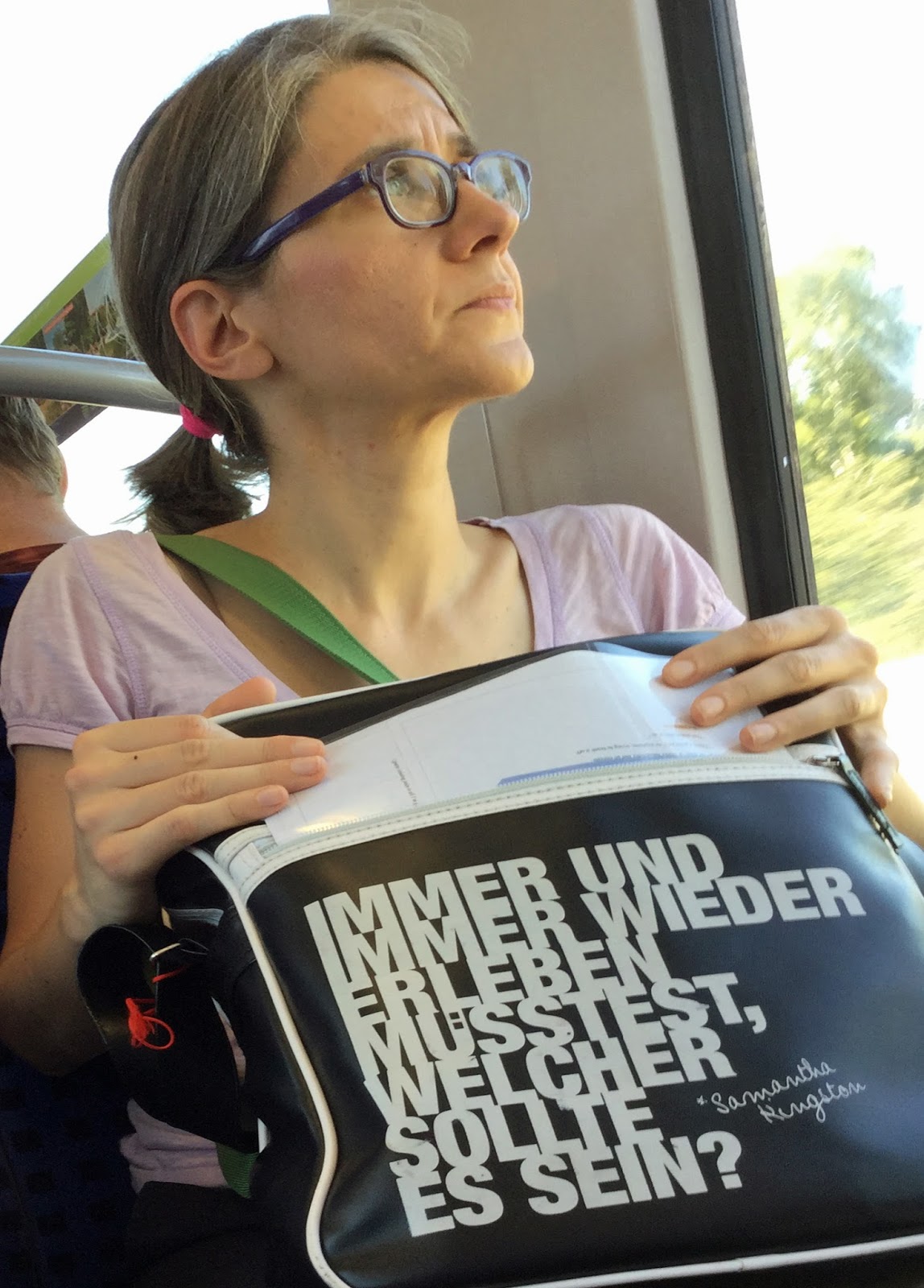 That's when I realized that certain moments go on forever. Even after they're over they still go on, even after you're dead and buried, those moments are lasting still, backward and forward, on into infinity. They are everything and everywhere all at once.

Before I fall, by Lauren Oliver 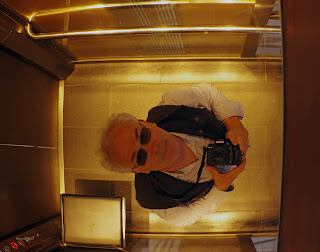