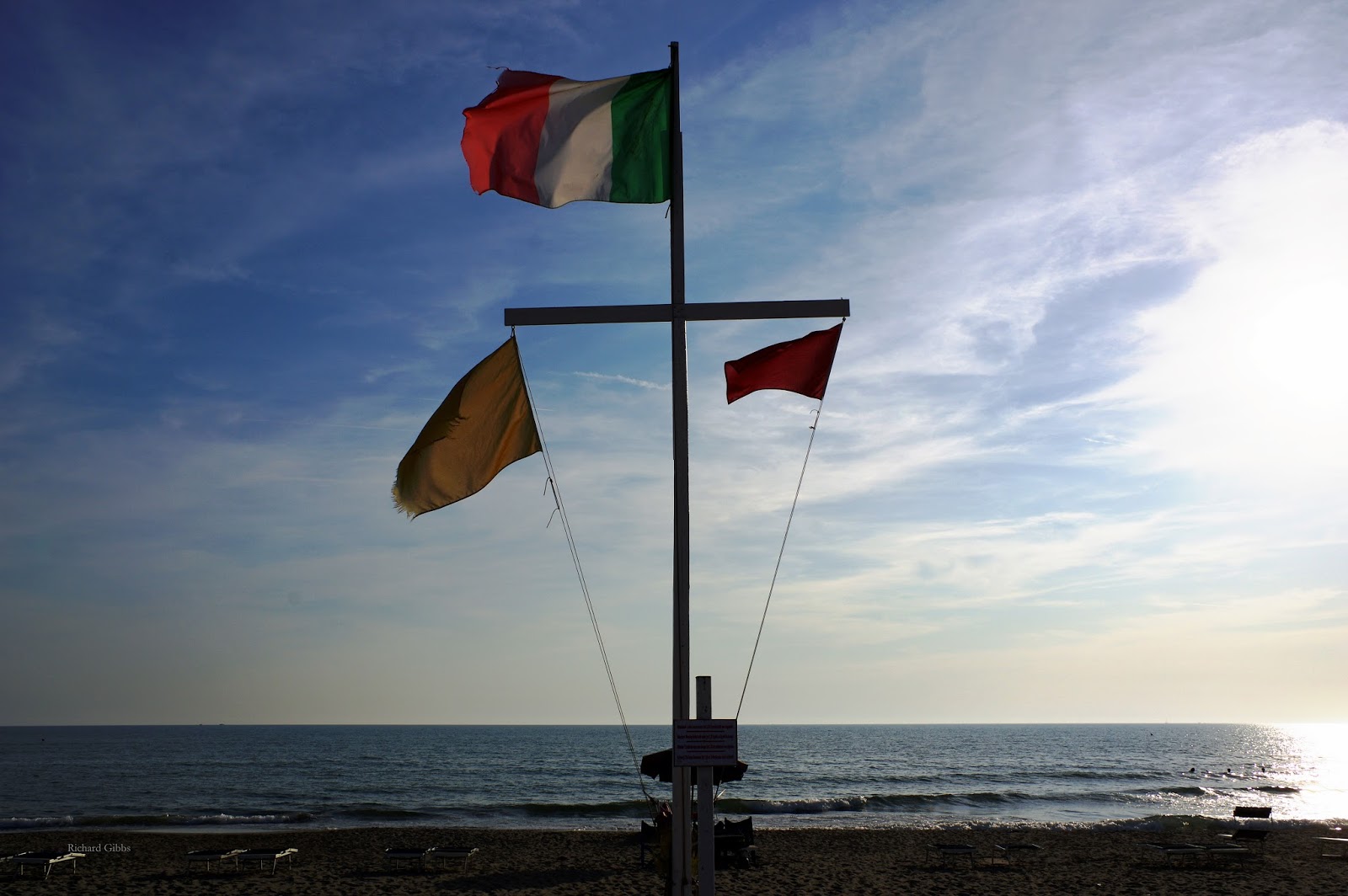 Dusk gathers on the Tuscan coast.....

Marina di Torre del Lago is quiet. Some years ago this was a very popular gay resort, but, for some reason, it has fallen from grace, and some of the once-teeming karaoke bars and trendy eateries have closed. The days are busy, with the beaches full, but it seems more family now, and not everyone stays overnight.... 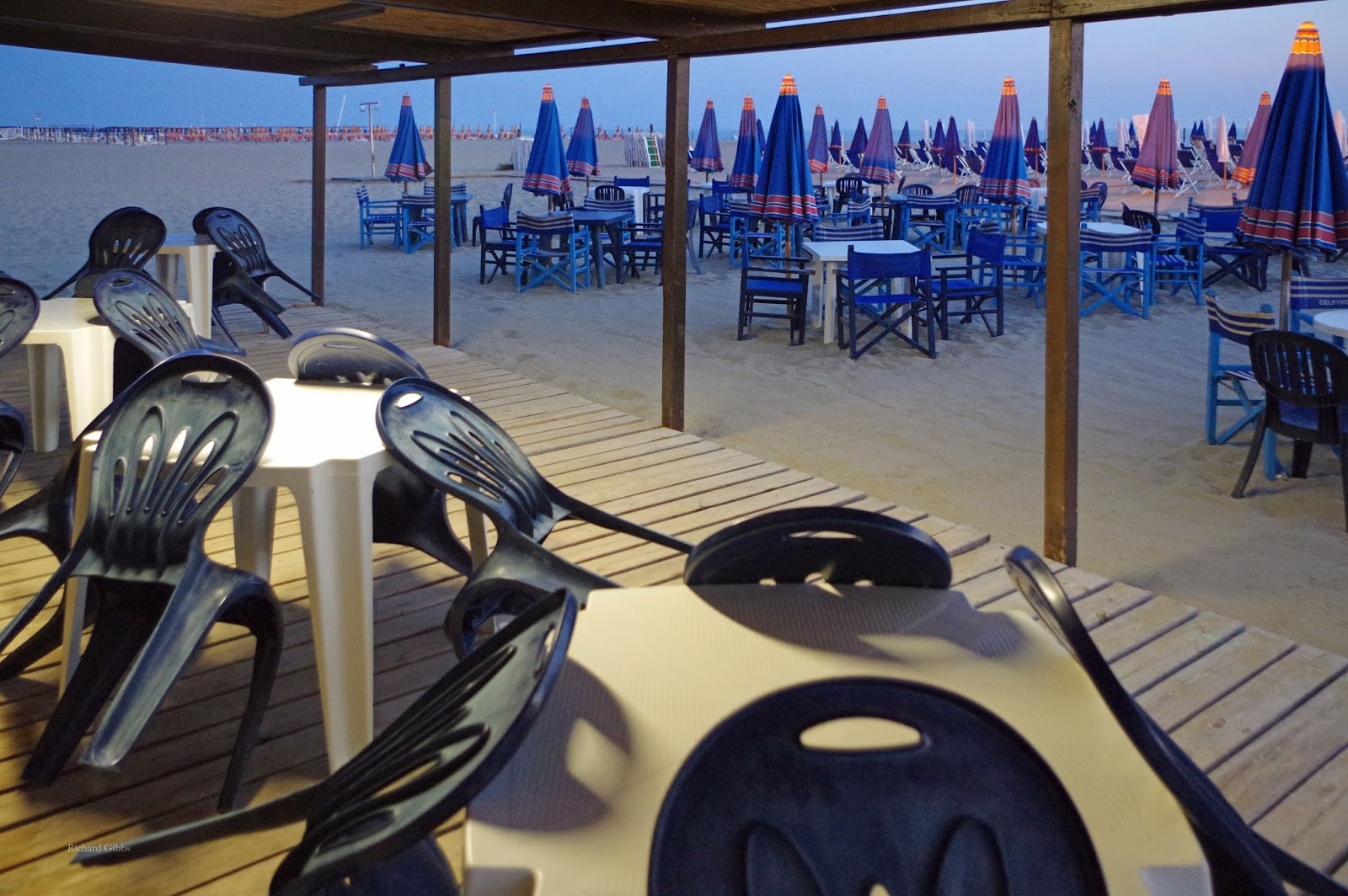 Though there are those who like the evening cool,

And some who like to stay on as night falls,

And some who will frolic in the dark, 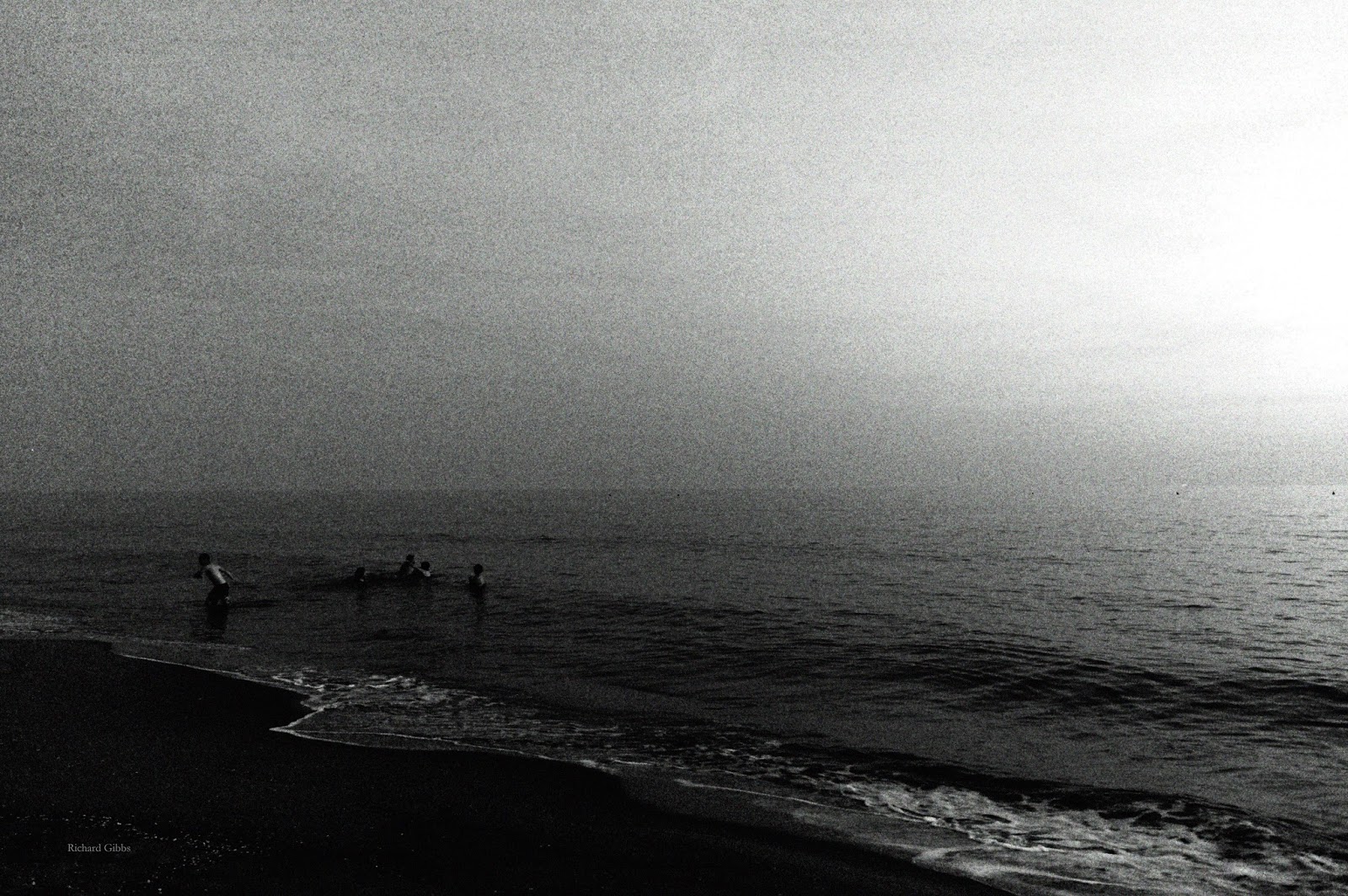 We wander the almost empty esplanade, 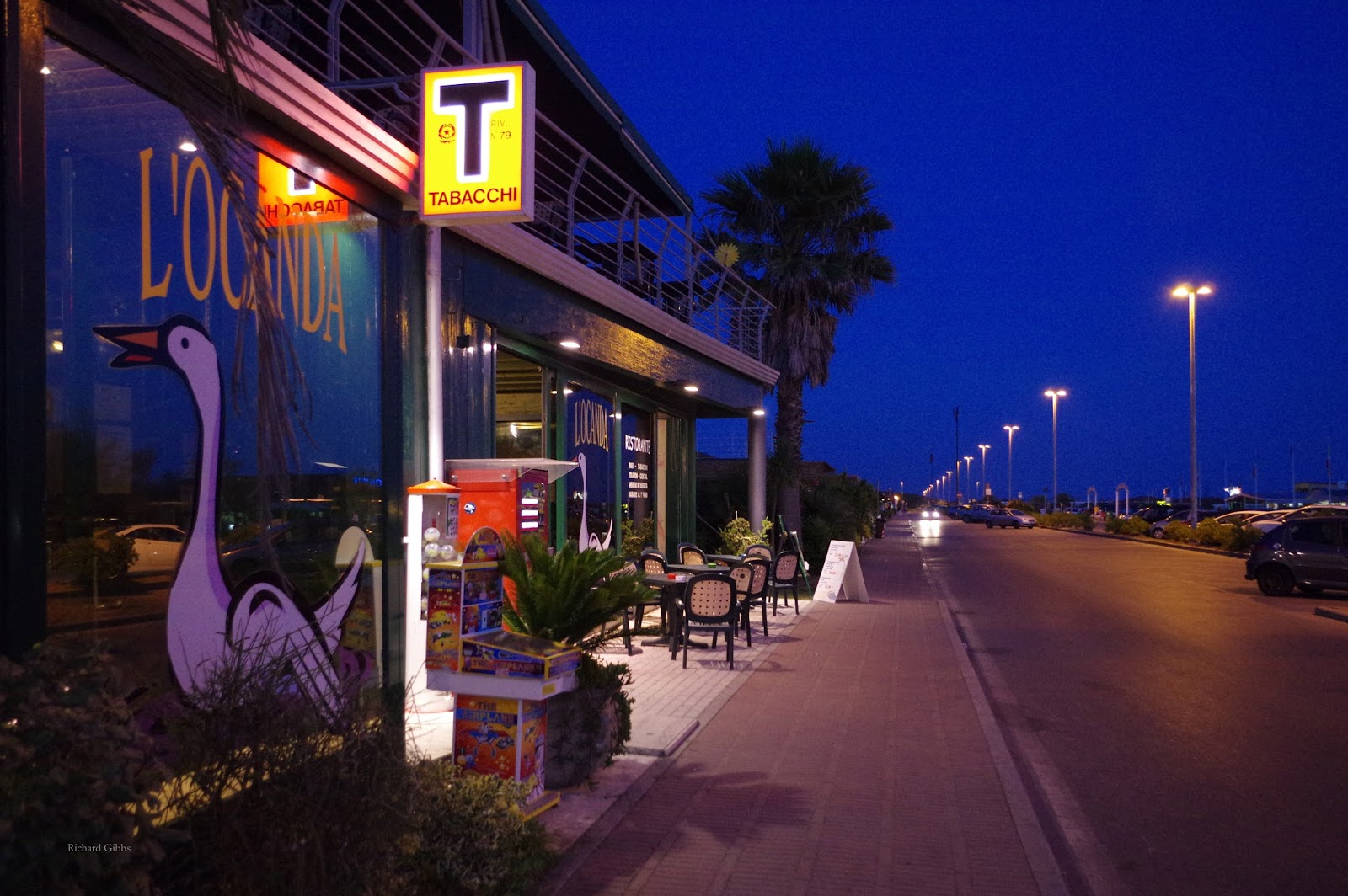 Check out the almost empty restaurants, 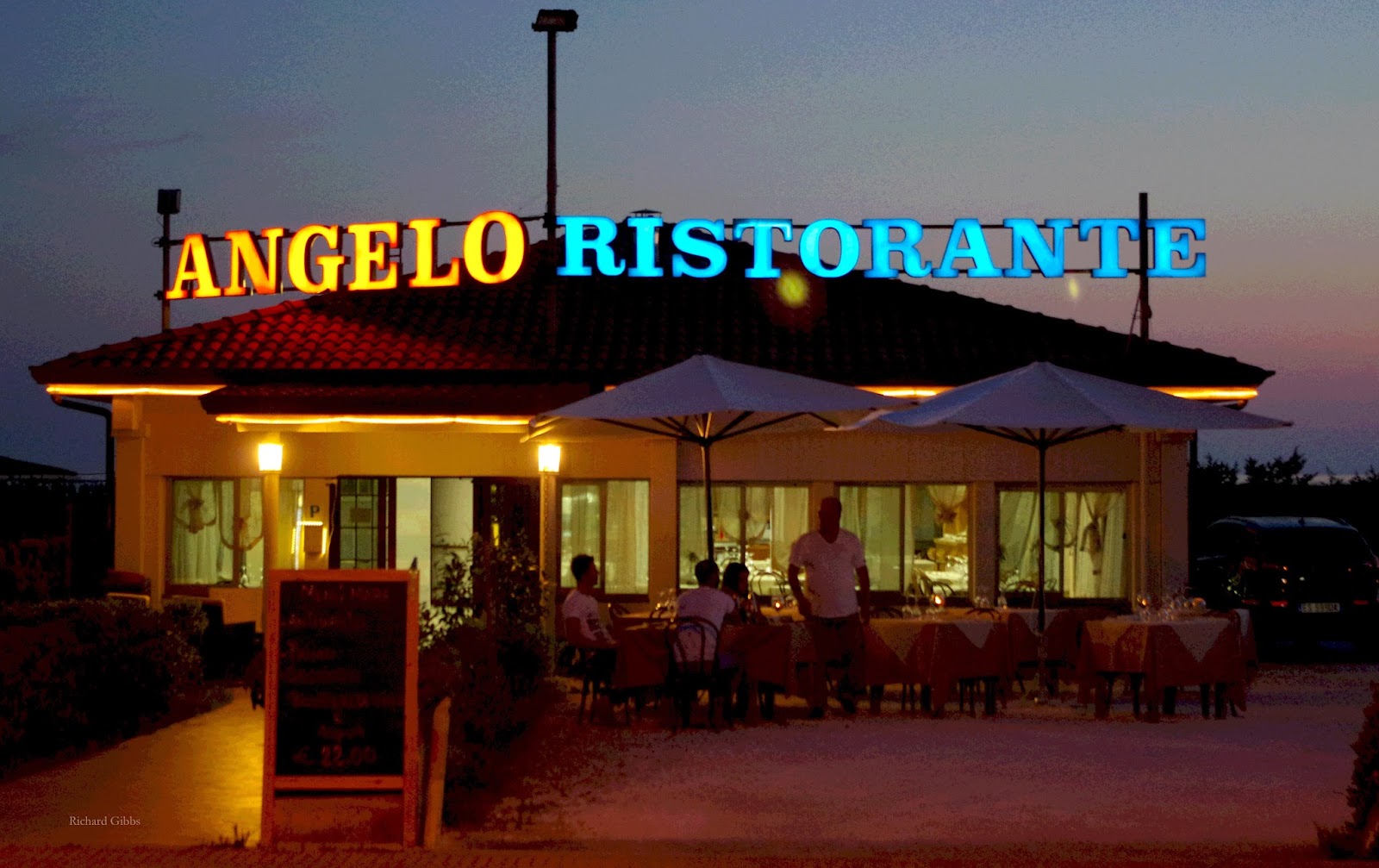 Noting the number of establishments that have closed.  A sign of the times? Economic depression? 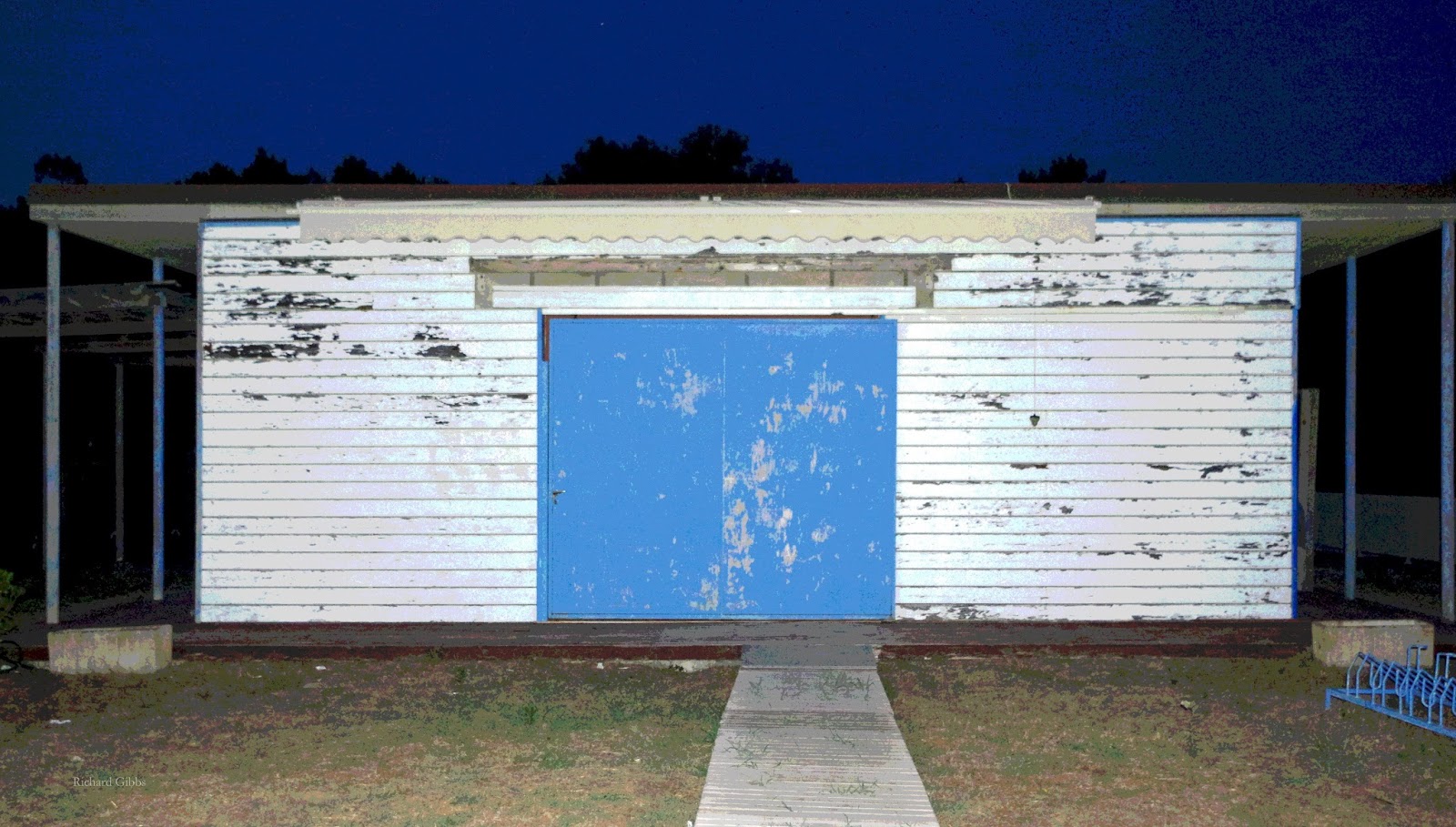 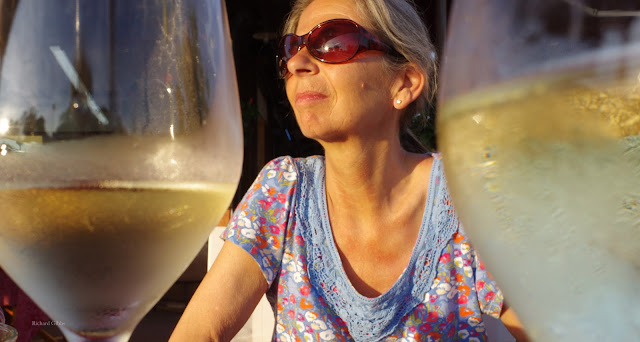 Next morning, life picks up again, with the papers and an aperitivo, 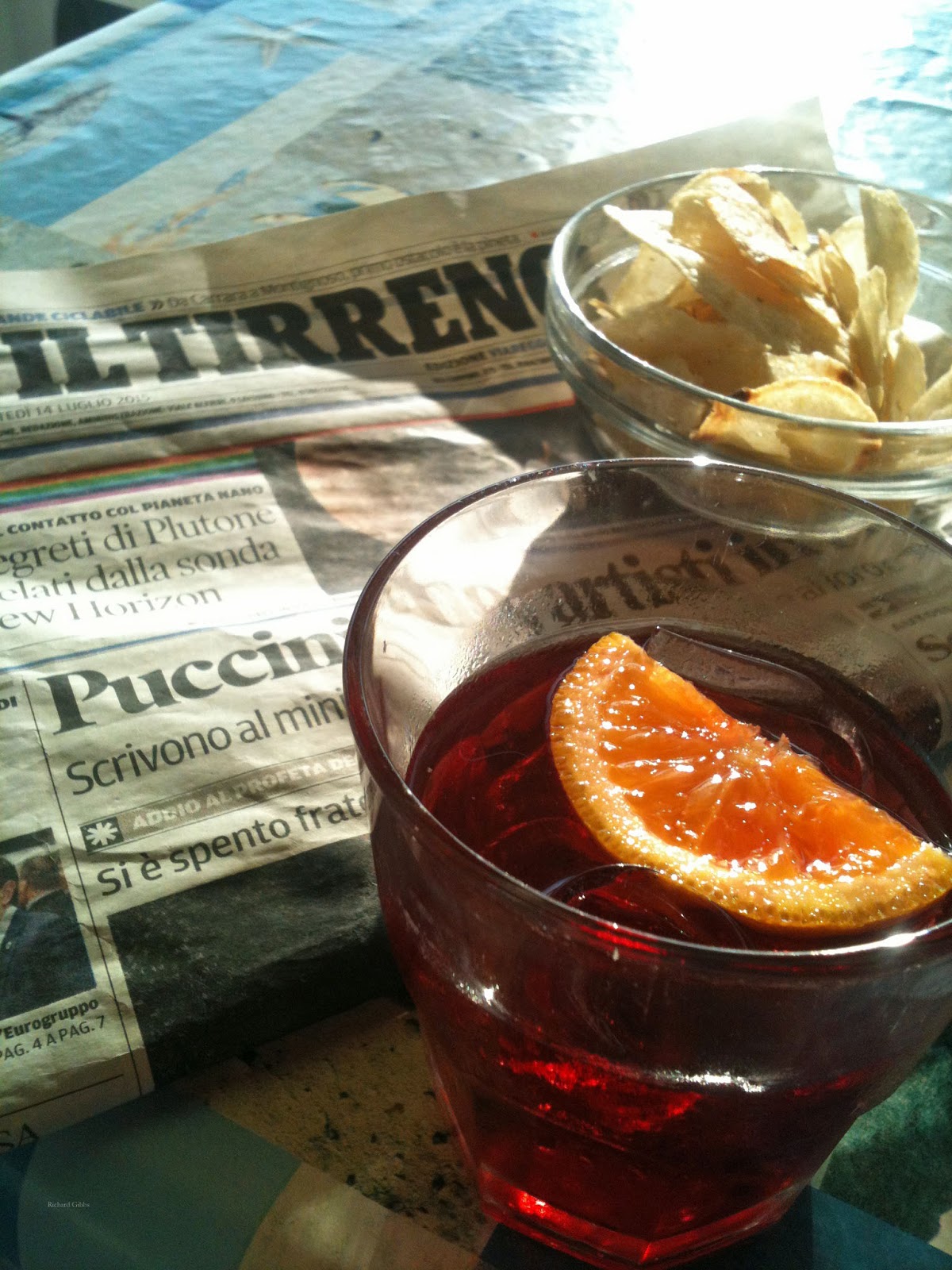 And we visit Giacomo Puccini's residence nearby, on the shore of Lago Massacuccioli, where we meet his granddaughter, Simona, and are gently nibbled by mosquitoes while we sift through the memorabilia of the Maestro.....

Then, driving south, we move across to the island of Giglio, 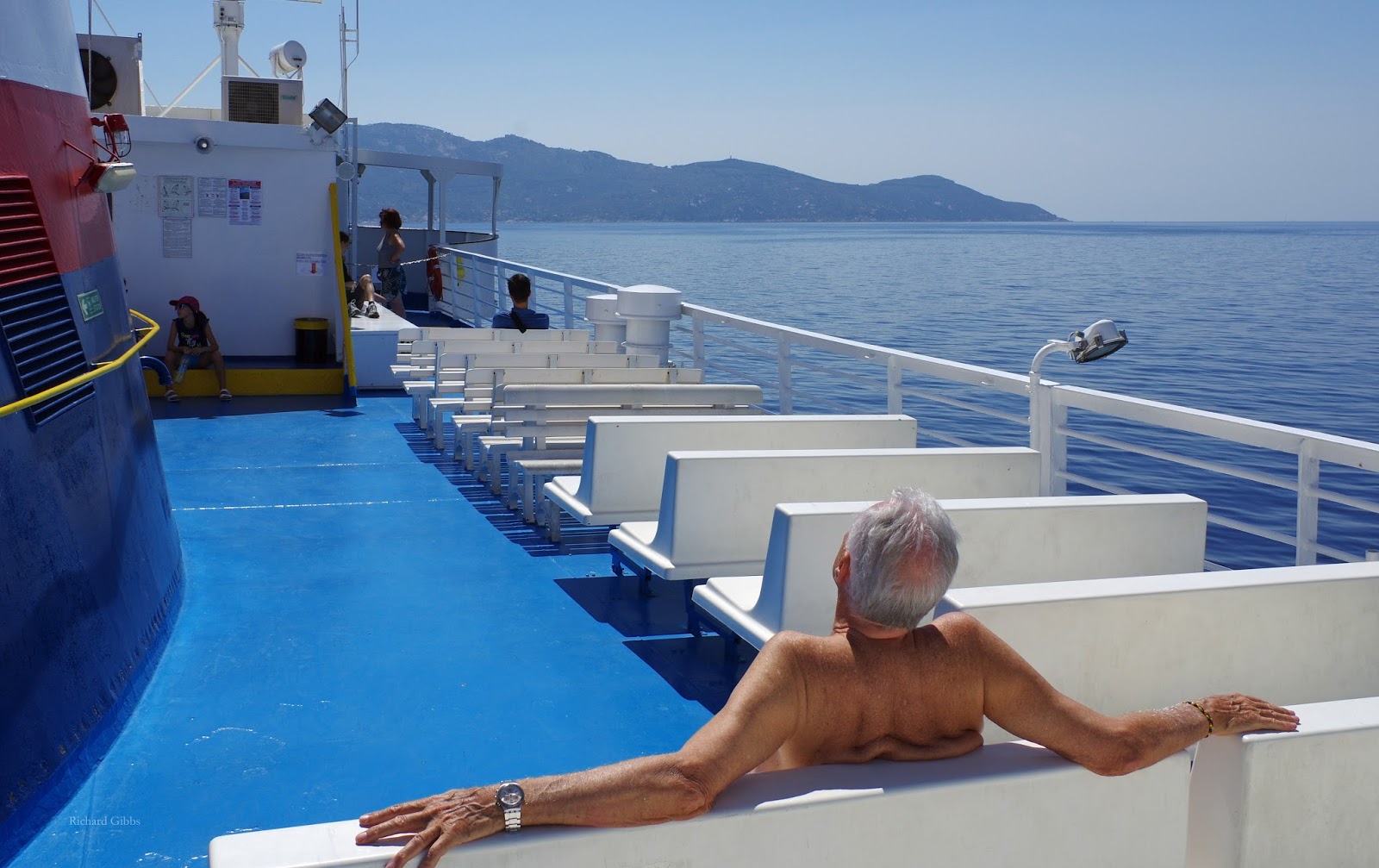 Passing the site of the Costa Concordia disaster (see http://www.richardpgibbs.org/2013/08/isola-del-giglio-revisited.html for more on that....) where, although the wreck has been removed, work continues to remove the structures used in the salvage operation.... 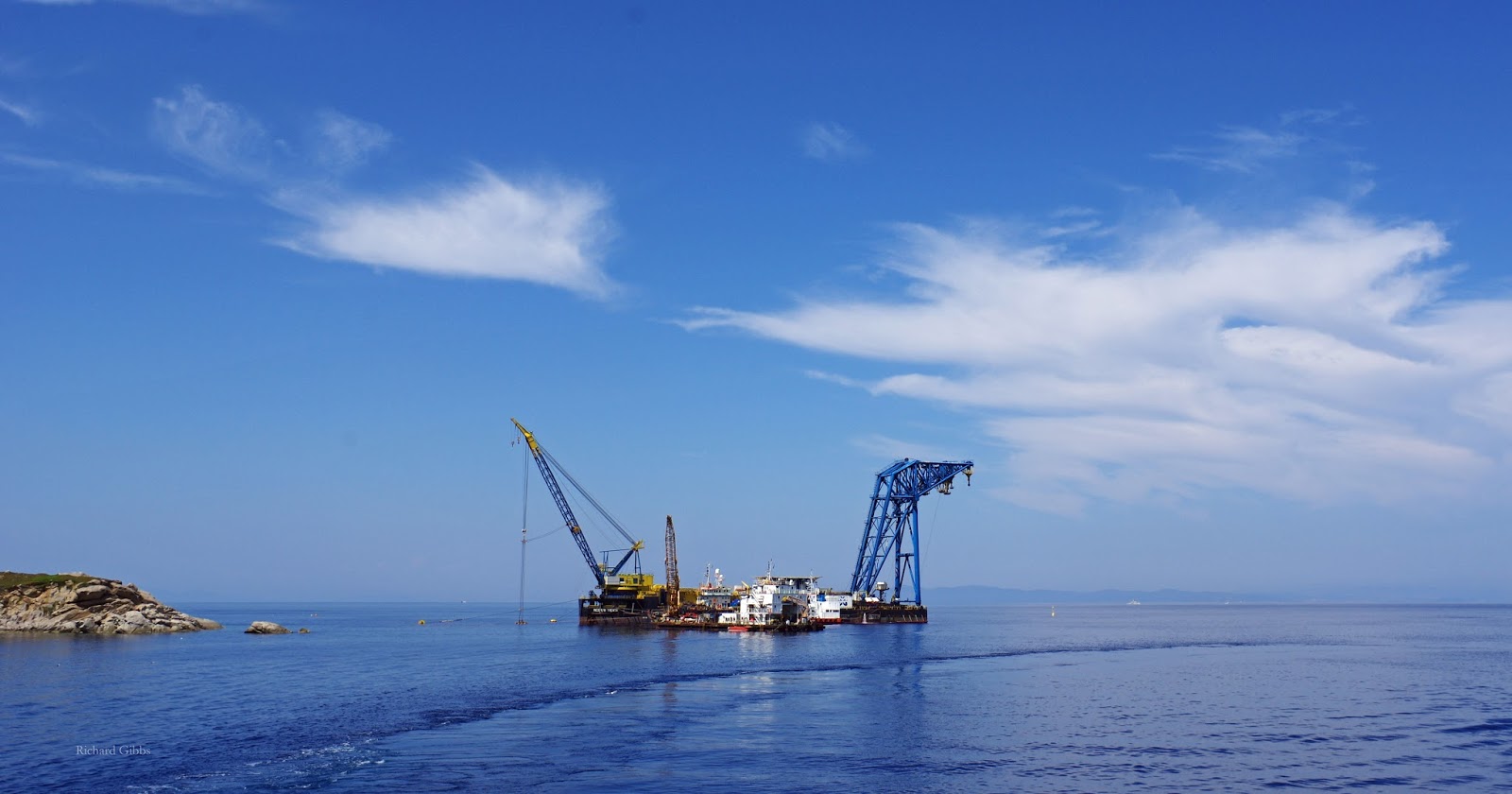 Docking in the picturesque harbour of Giglio Porto,

Snorkelling in the crystal clear, fish-filled, waters of Arenella, then climbing 405 metres from sea level to the village of Castello, 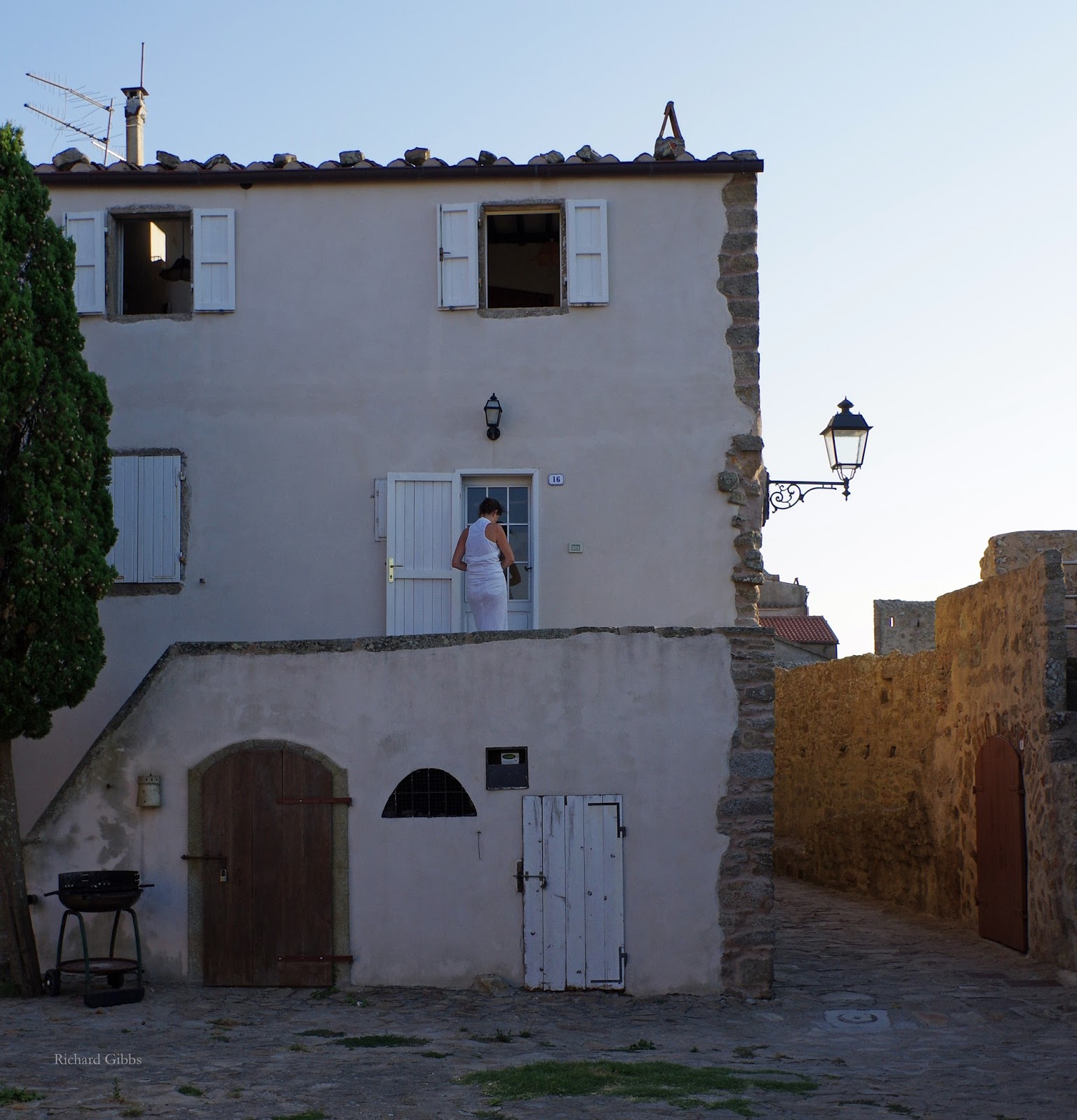 And an ancient tower is an airy retaurant, Da Maria, where we drink Ansonica wine, and from whose terrace we enjoy the sunset over the Faraglioni...... 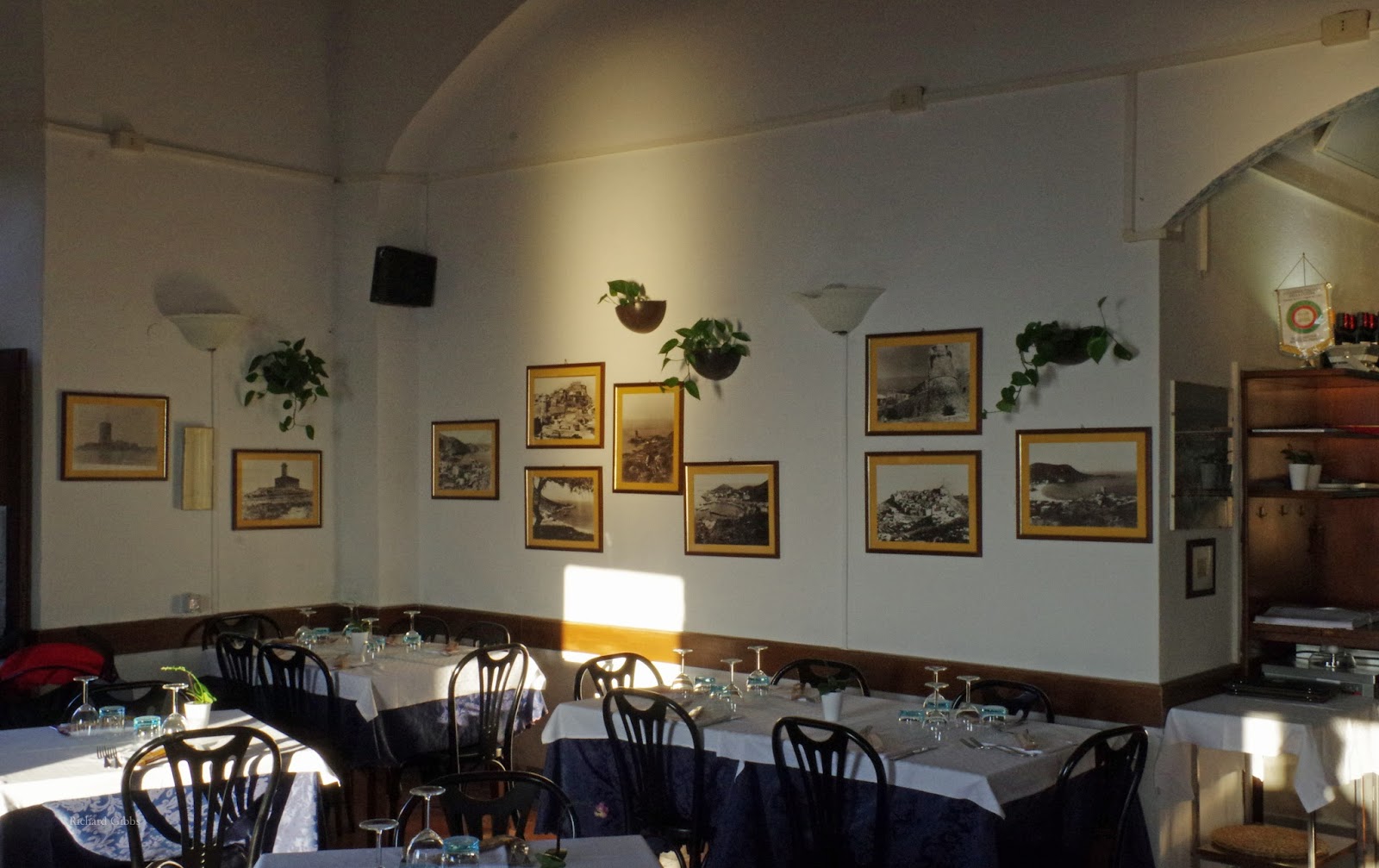 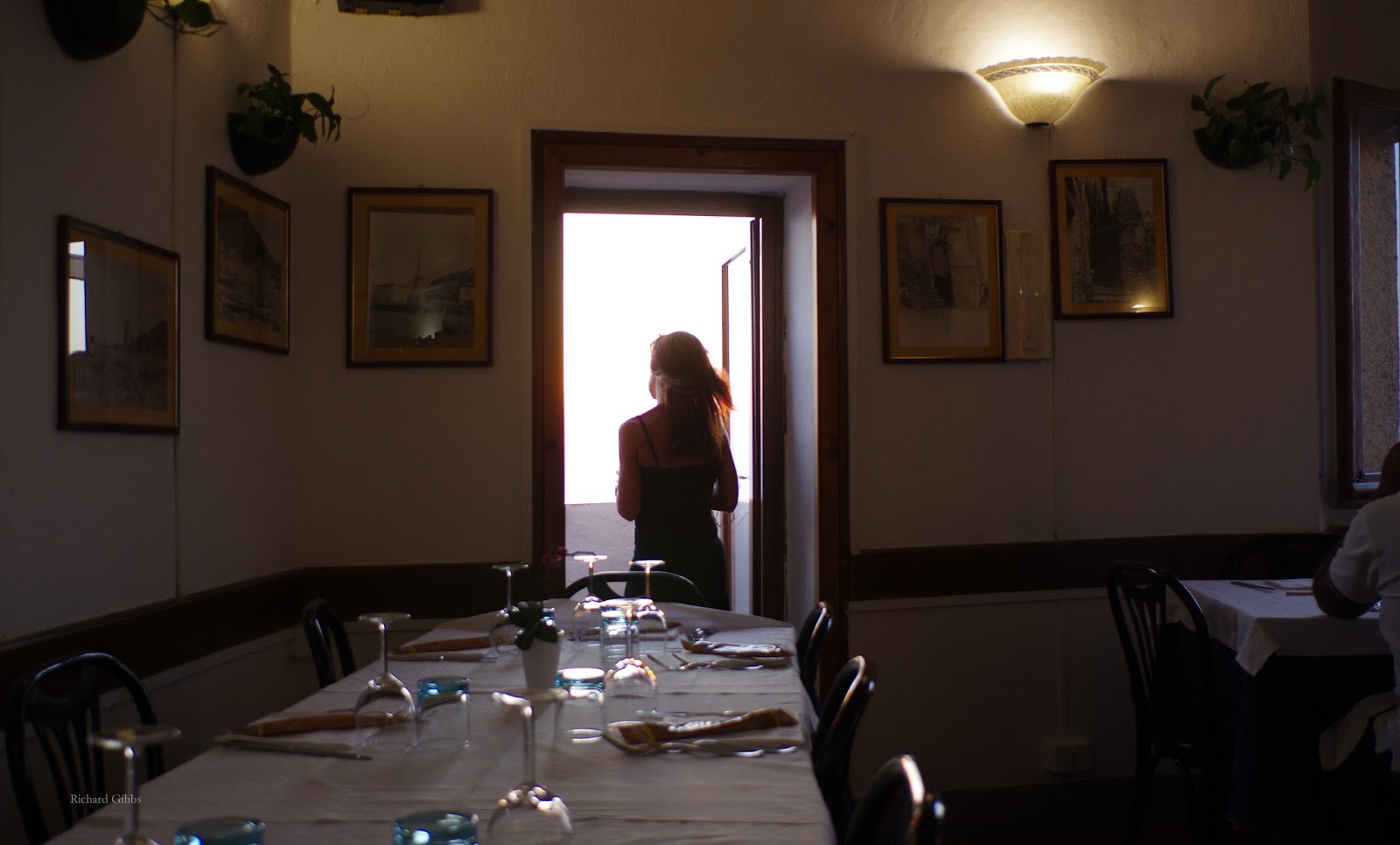 Then, next morning, back across the strait to Porto Santo Stefano, mesmerised by the blues and whites of ship and sea, 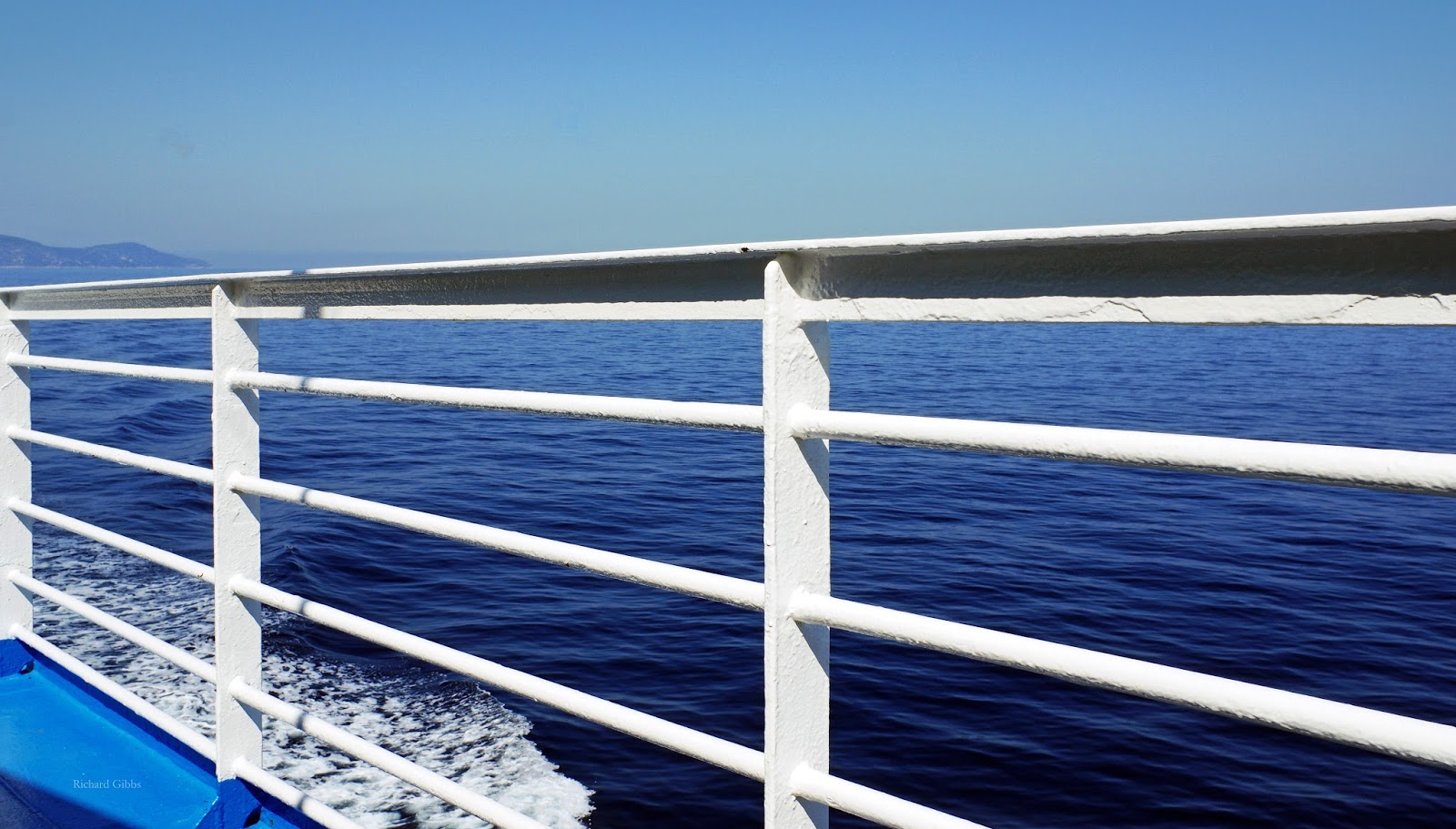 From where we drive to the green-fringed tranquillity of Lago di Vico (see http://www.richardpgibbs.org/2012/08/tesserae-3.html).... 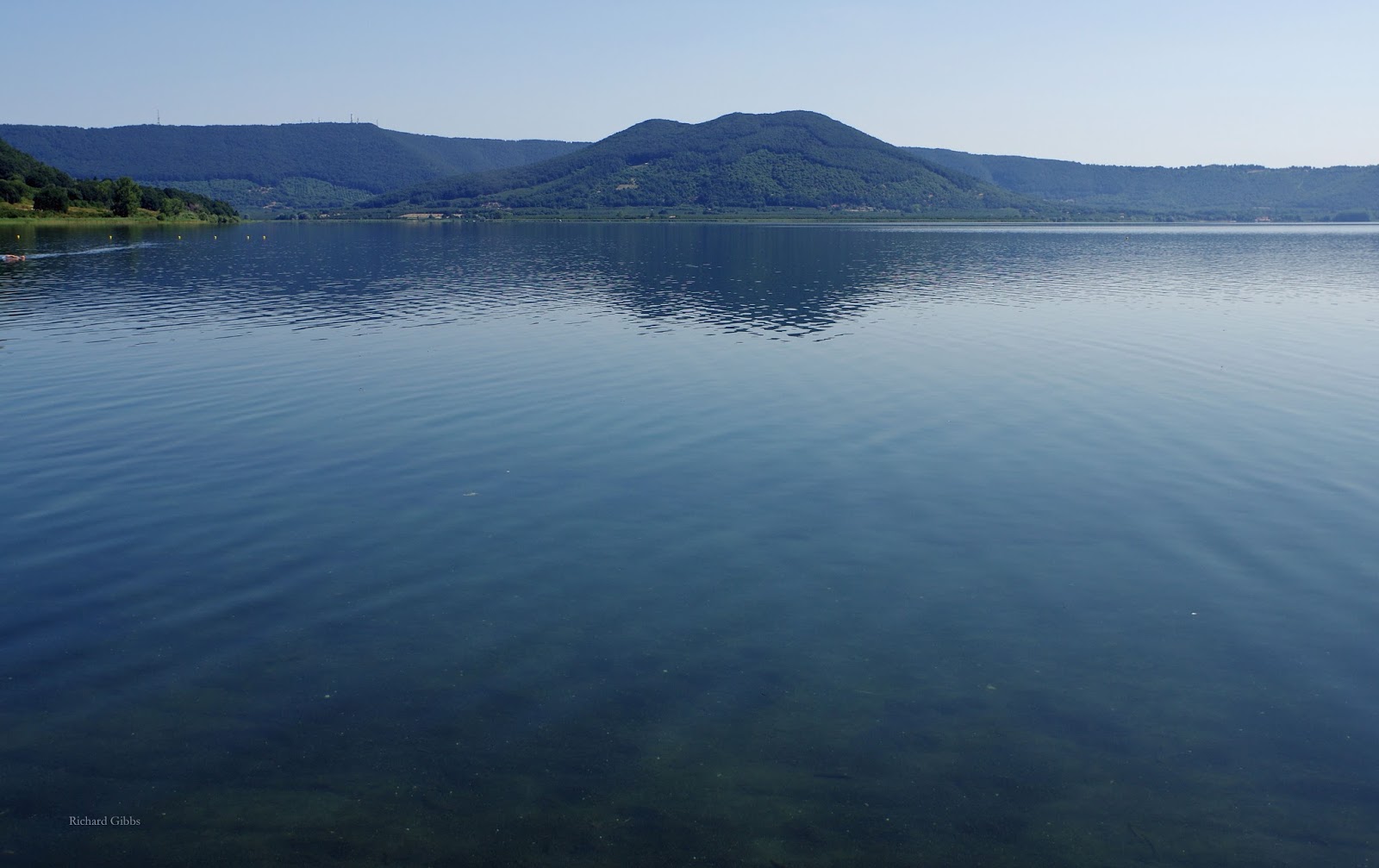 And then on to our old home village of Trevignano Romano (see http://www.richardpgibbs.org/2012/08/trevignano-romano.html) which hugs the shore of Lake Bracciano, below the volcanic cone of the Rocca Romana..... 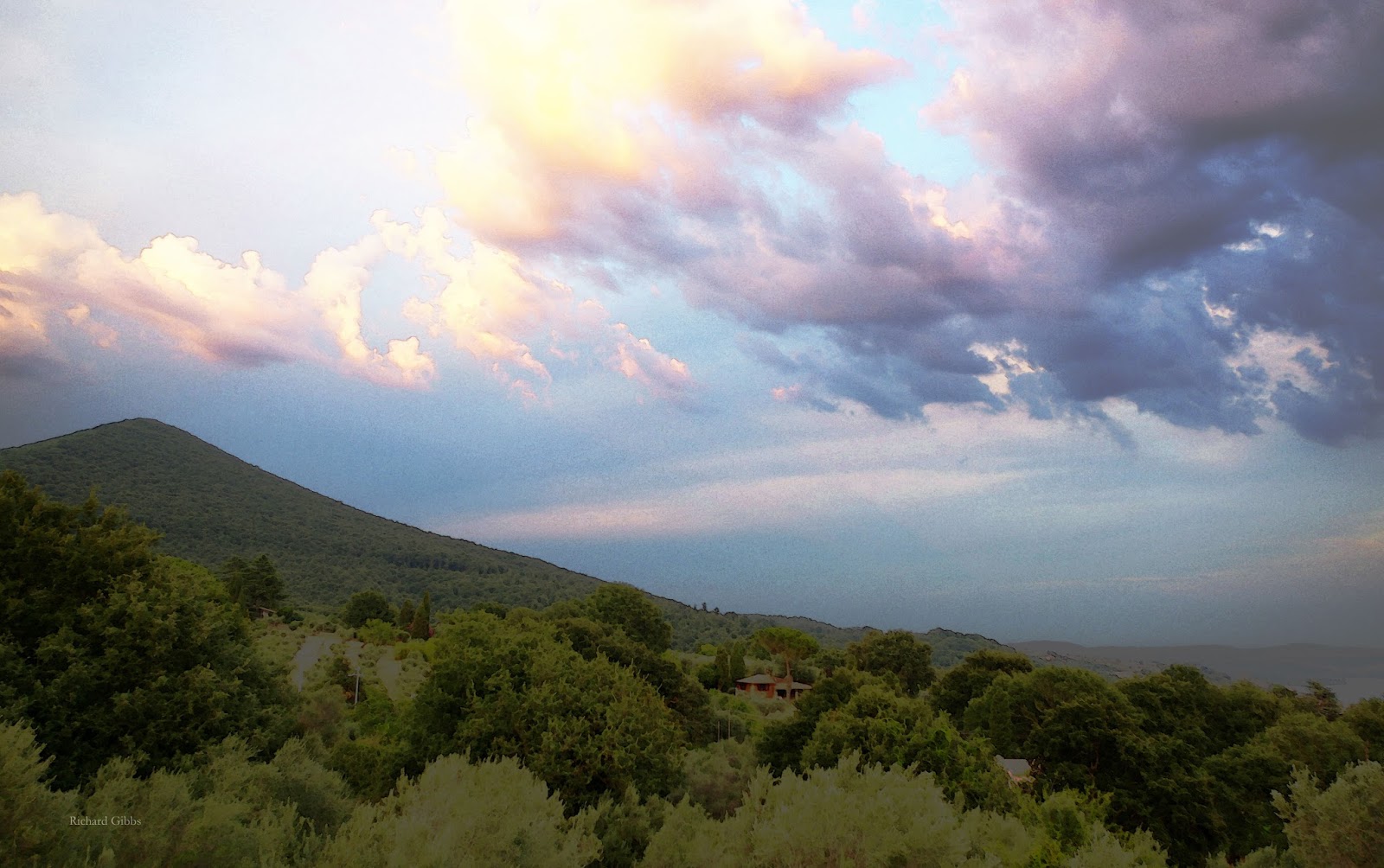 Where we have a wonderful dinner in La Grotta Azzura (grazie Nazareno!) with our 102+ yr old friend Truman.....(see http://www.richardpgibbs.org/2012/09/tesserae-5.html for something about his 100th birthday).... 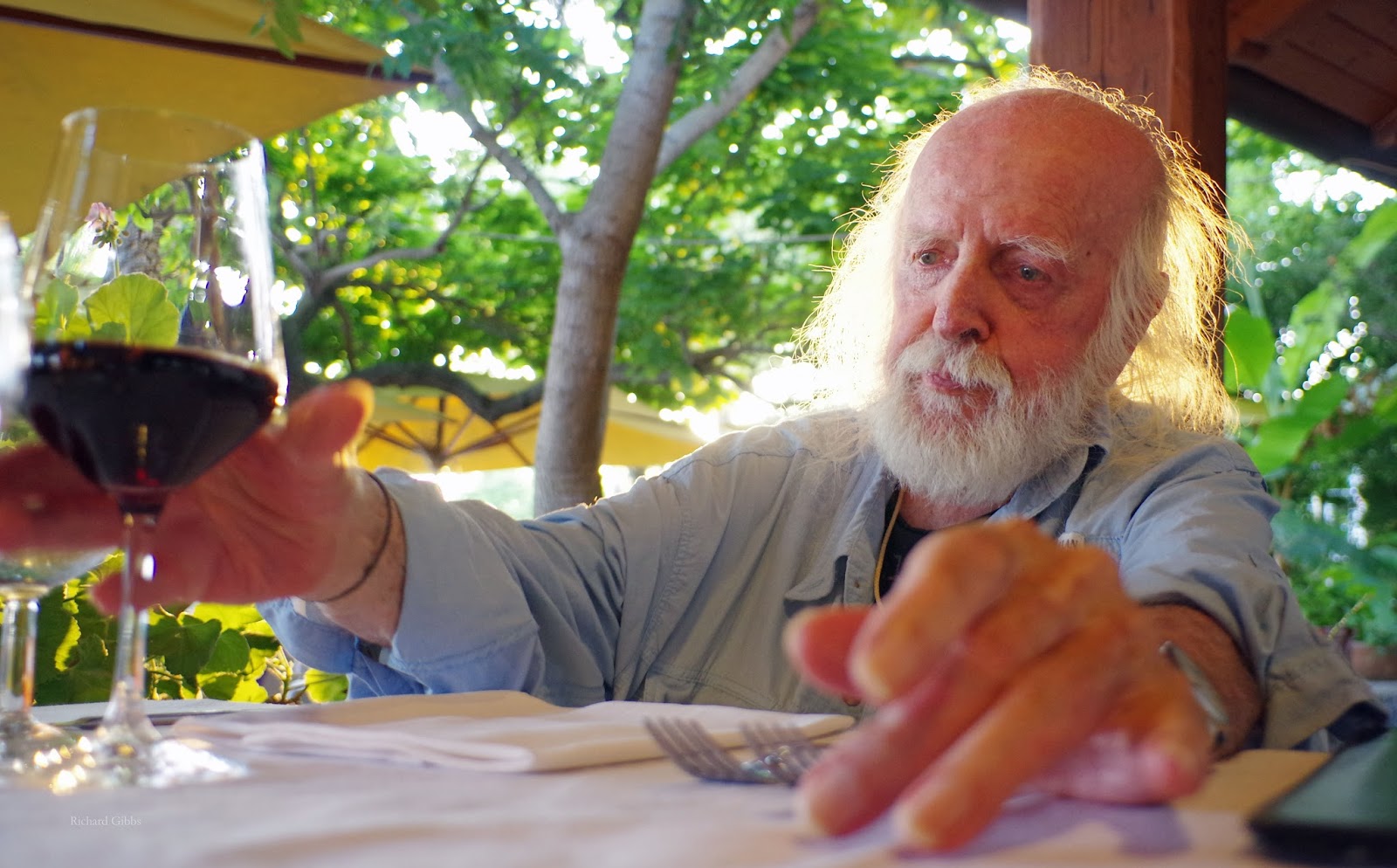 The following day the heat topples over itself, and a storm blows through the evening, sprinkling just enough rain to cause a rainbow to direct me to a pot of gold, not far from where we used to live..... 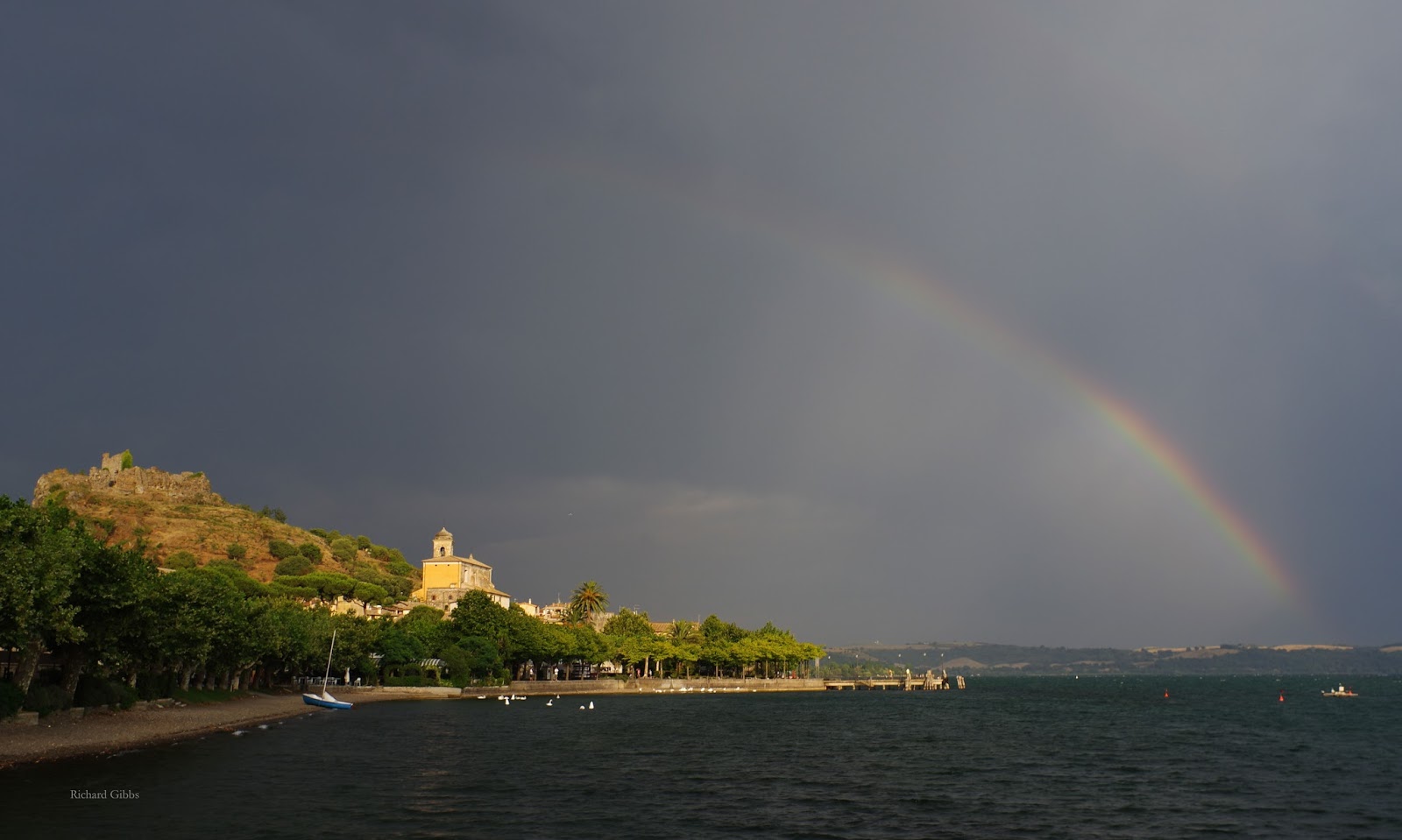 The wind stirs the lake to gusty violence, causing an evacuation that rivals the last days of Pompeii.... 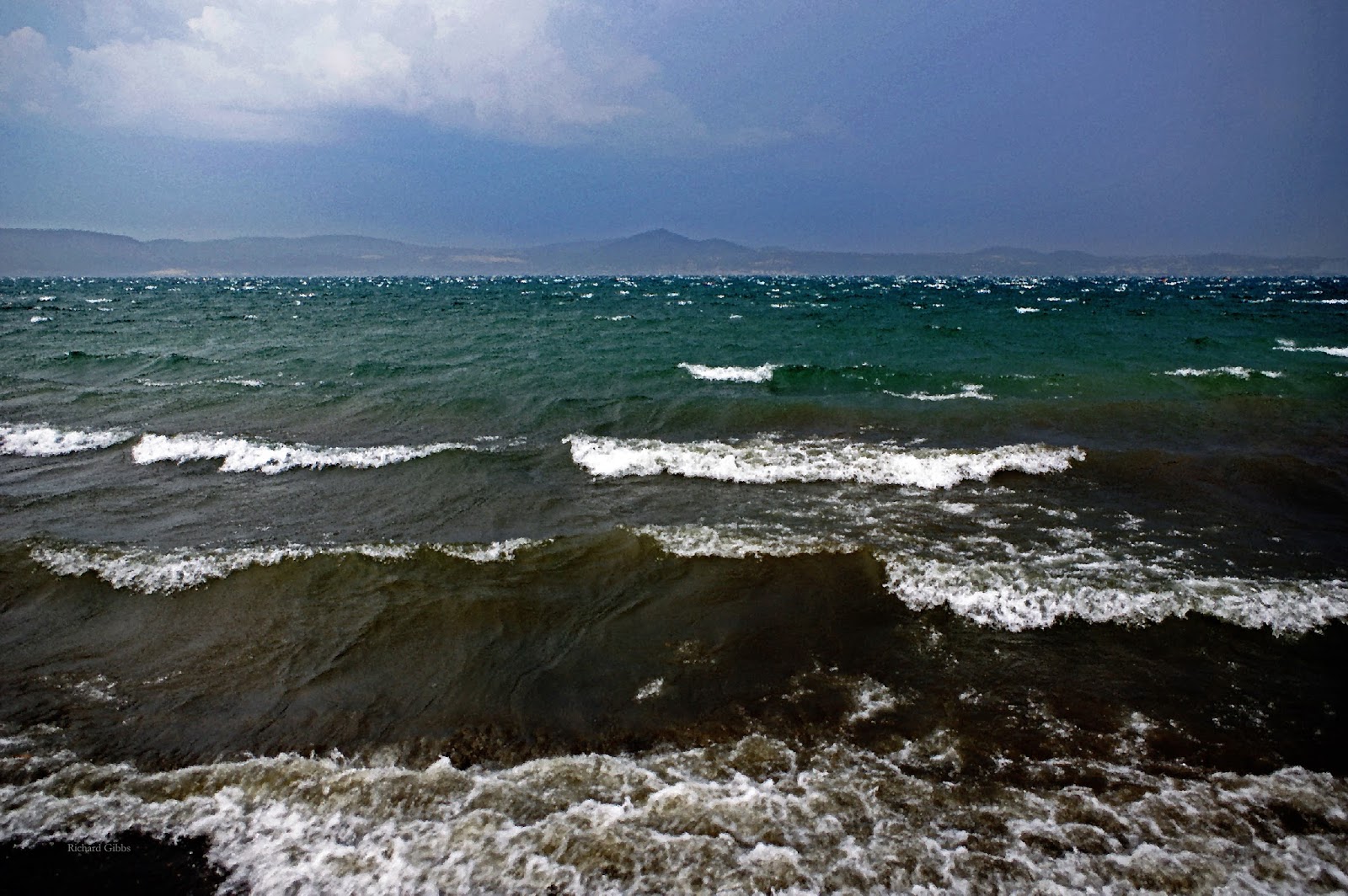 Then it calms again, heat wraps the earth in a blanket, and although perhaps the instruction Nessun Dorma! (Let no-one sleep!) works for me, it's not applicable to dogs. Lola, patronne of Il Poggio degli Ulivi, seems to like this position, day and night..... 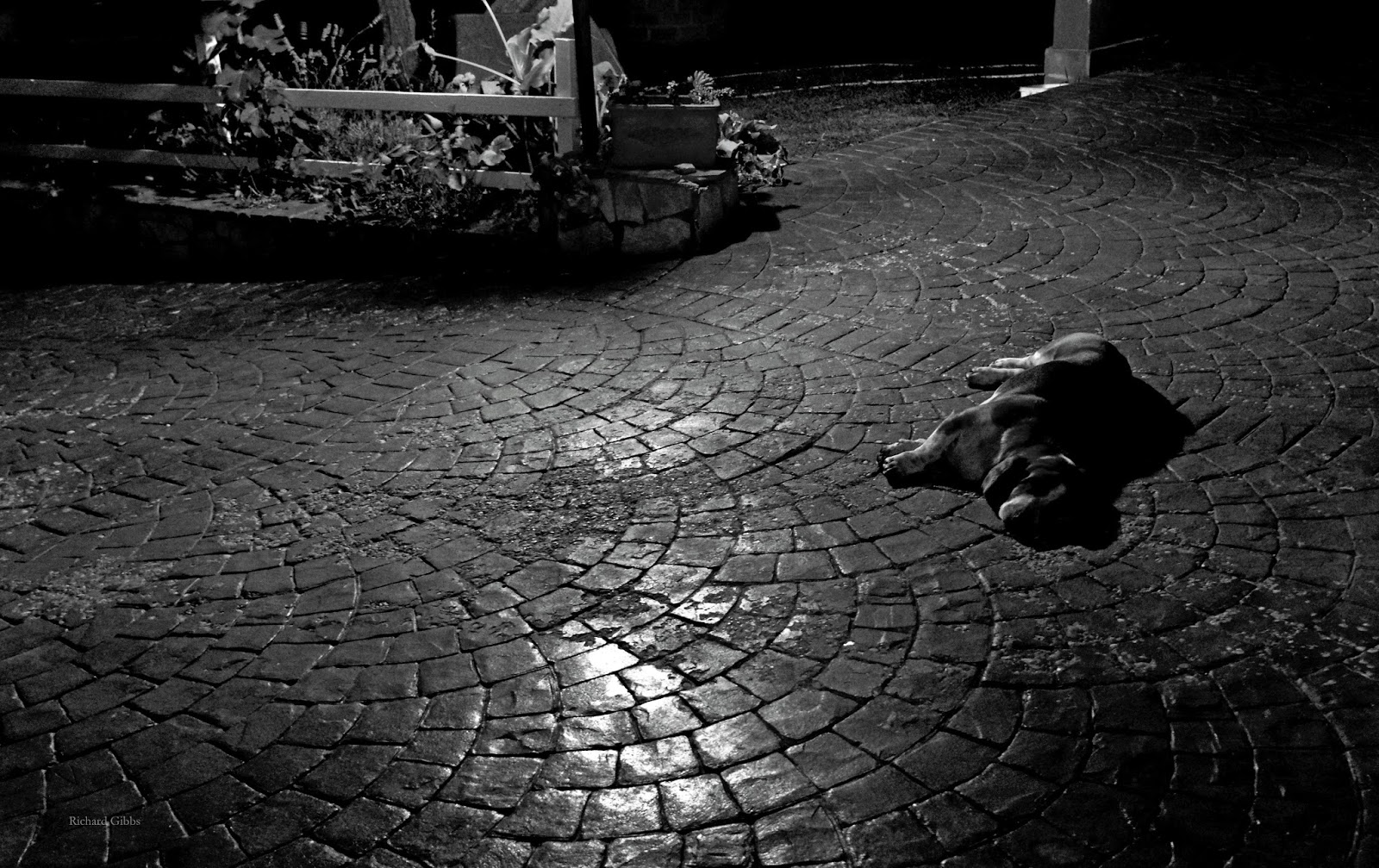 And at breakfast time, there is the chorus of male Cicadas, almost deafening in the vibration of their tymbals, but above this rise the fluting calls of Golden Orioles, flitting between the nearby trees....

And in the bright Italian sun, tomatoes and basil just about sum up everything that is good, 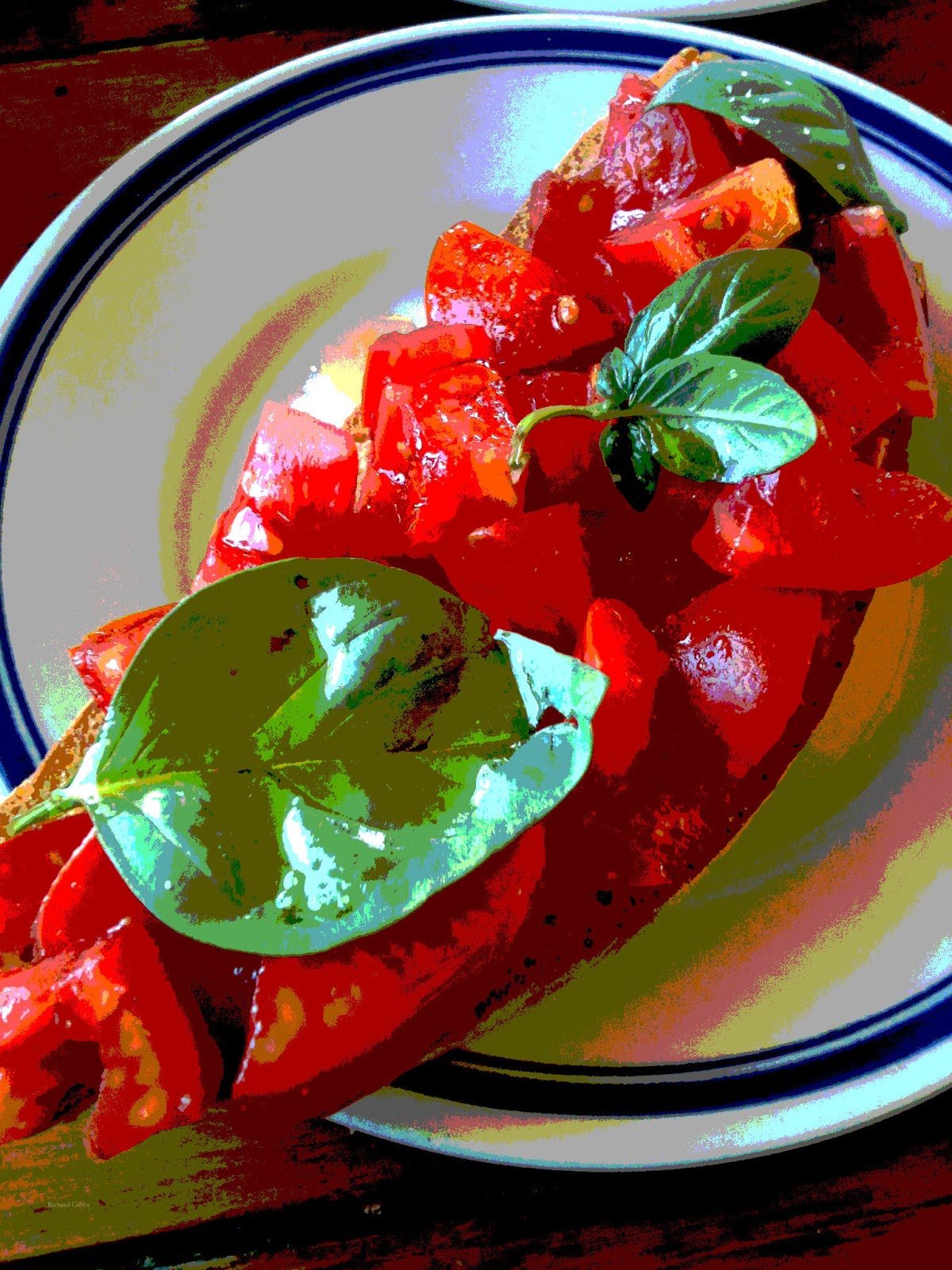 Though the light can play tricks in the heat of the day, with average temperatures over 36 degrees Celsius.... 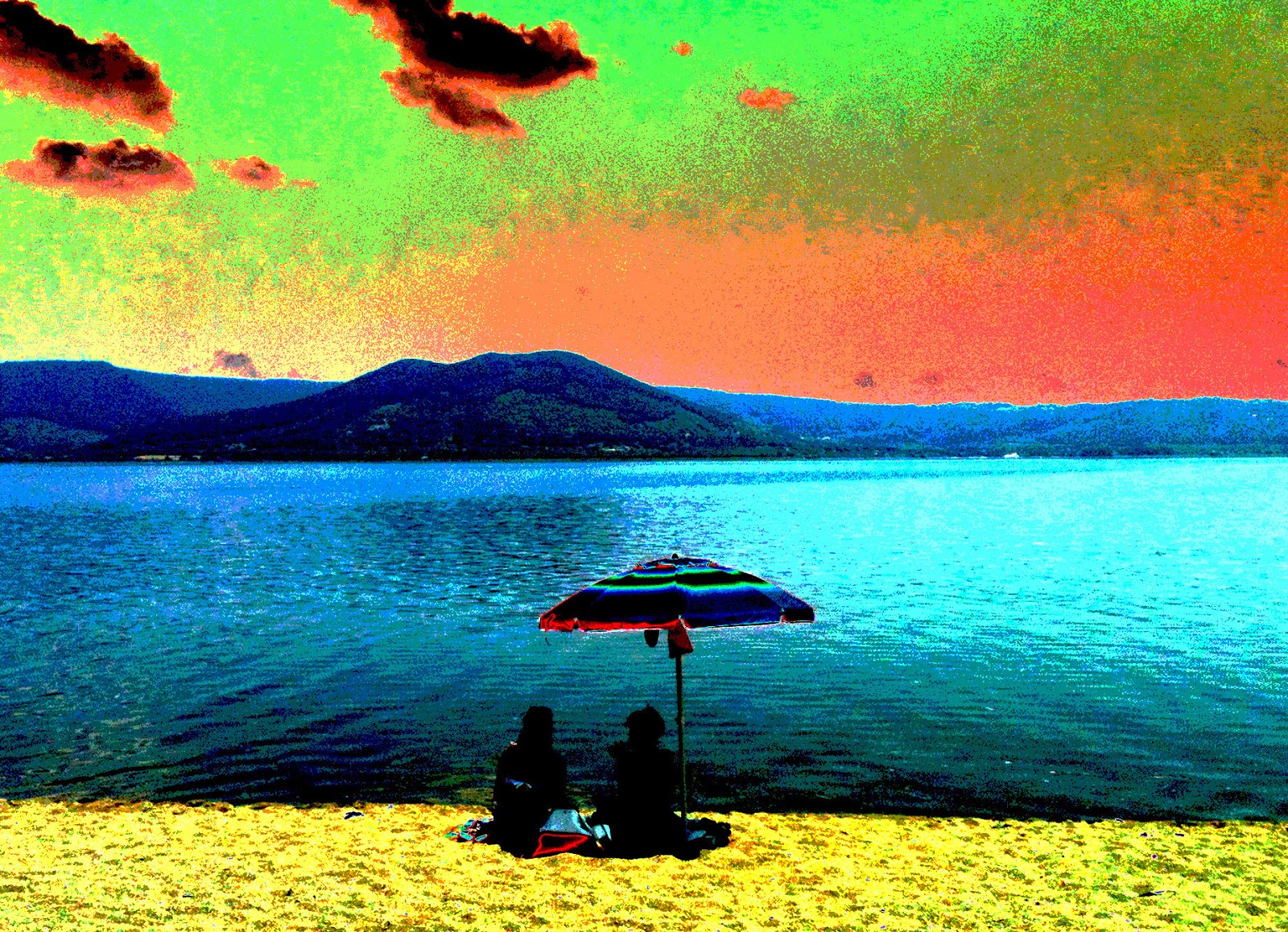 So, when all is said and done, I like it when the sun begins to slip away towards the horizon, and the mountains rise in the evening light, cool showers heralding the stars..... 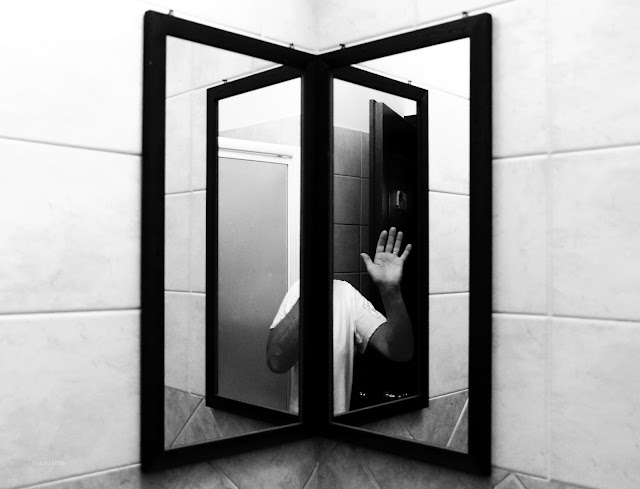