A Royal Bend in the River

Goo now thy wey, this penaunce ys but lyte,
And whan this book ys maad, yive it the quene,
On my byhalf, at Eltham or at Sheene.....

So says Alceste, the queen of love (modelled on Anne of Bohemia) to the poet, Geoffrey Chaucer, in the Prologue to The Legend of Good Women, in 1386, referring to two preferred royal retreats.

In the year 1500, King Henry VII, Earl of Richmond (in Yorkshire) renamed the quiet royal manor of Sheen as - upon . 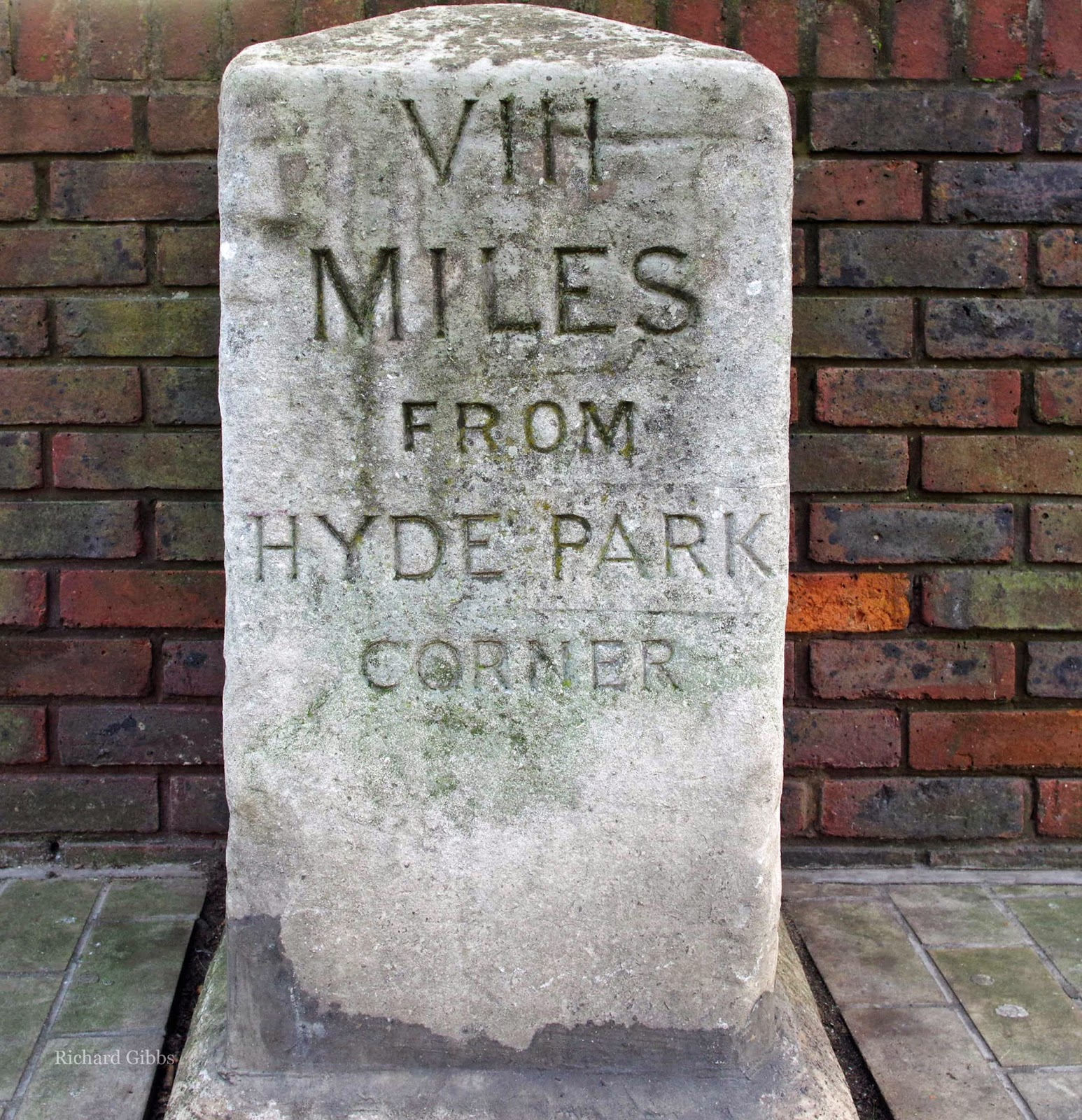 Not for nothing are there pubs here named The Duke of York, and The Prince's Head.  It wasn't far away, in , in 1536, that Henry VIII stood on what is now known as King Henry's Mound to spy the smoke signal announcing the beheading of Anne Boleyn at Tower Green.  The following day he remarried.  From this viewpoint today it is possible to see the dome of 's, ten miles away across the city haze (telescope provided by my uncle's firm). 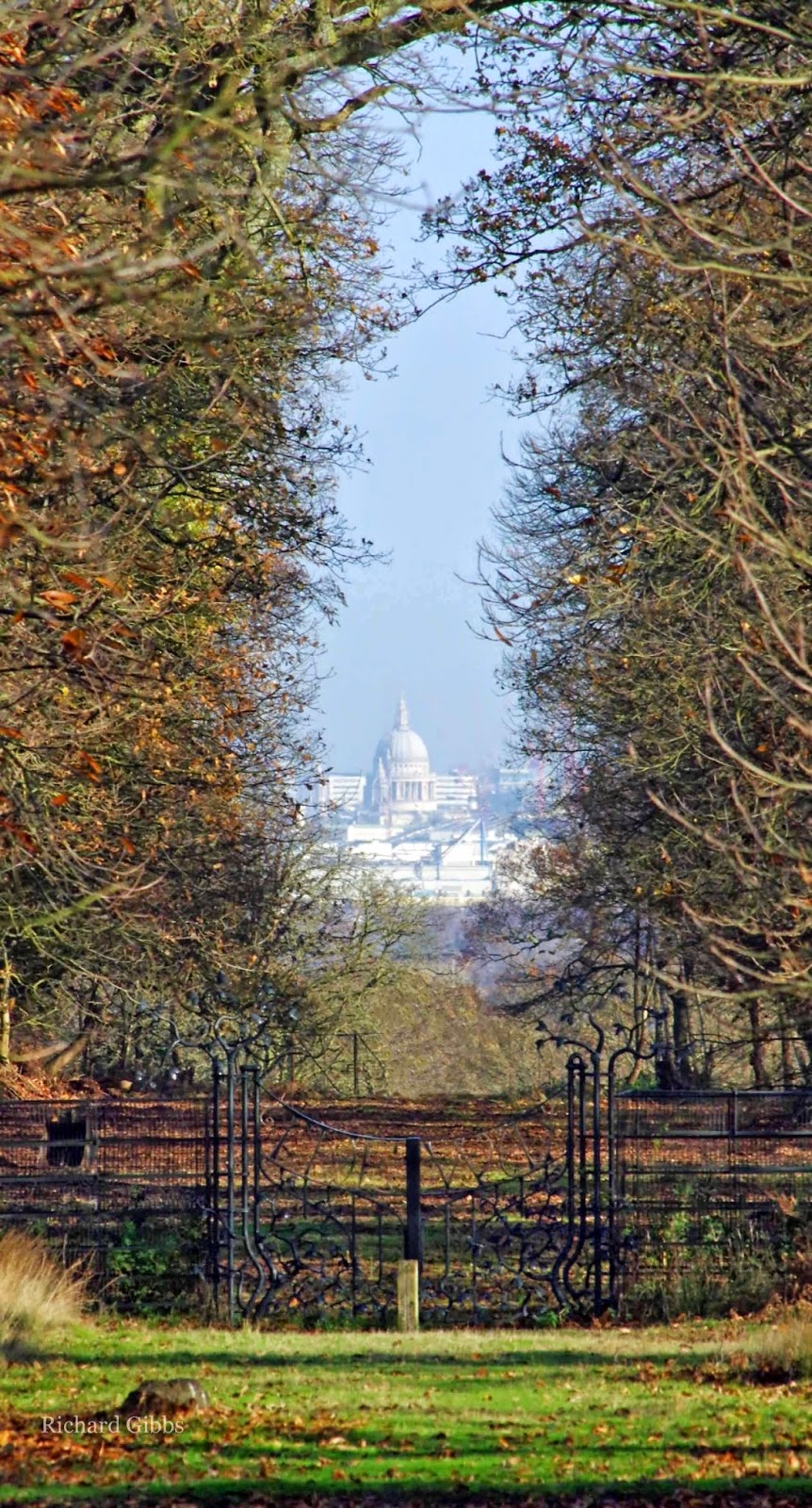 In the town itself, at the end of King Street (or Duke Street, or Old Palace Row), lies Richmond Green, where jousts were held in the 15th and 16th centuries - though nowadays any game involving more than ten players needs special permission.

The Gate House, Wardrobe and Old Palace Yard of the (originally founded in 1299 but rebuilt by Henry VII after its destruction by fire in 1497) still remain (as do the 18th century houses of the Maids of Honour of Queen Caroline).  Both Edward III (1377) and Elizabeth I (1603) died in the palace here. 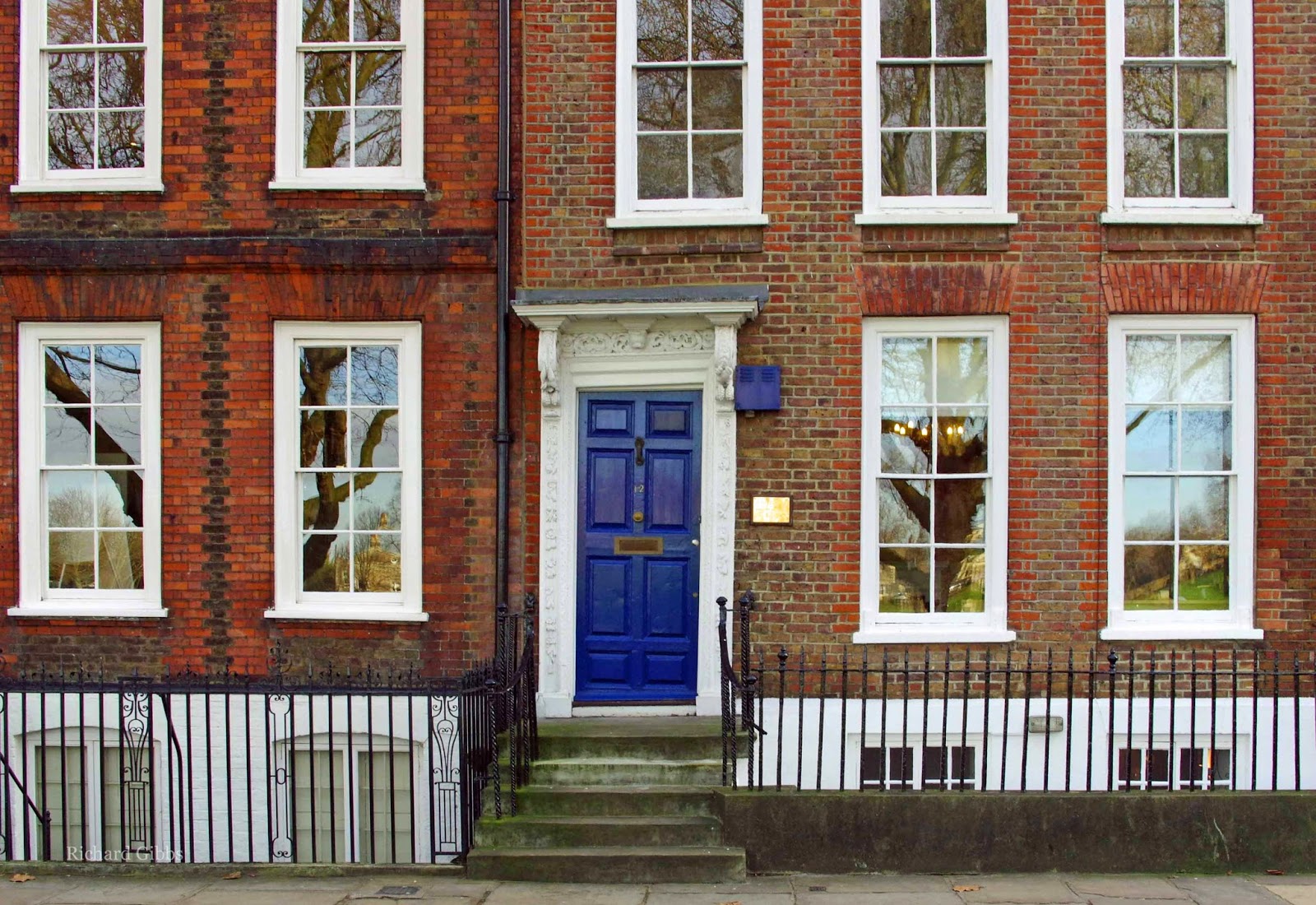 At least one other royal connection can be traced around this bend of the river.  Ham House, just beyond the village of Petersham, owned by the National Trust since 1948, is 17th century baroque and was gifted by Charles I to his whipping boy, William Murray, later 1st Earl of Dysart. Apparently, the house was also where King Charles II secretly met with his Cabal (his policy-making committee, named after the initials of its five members). 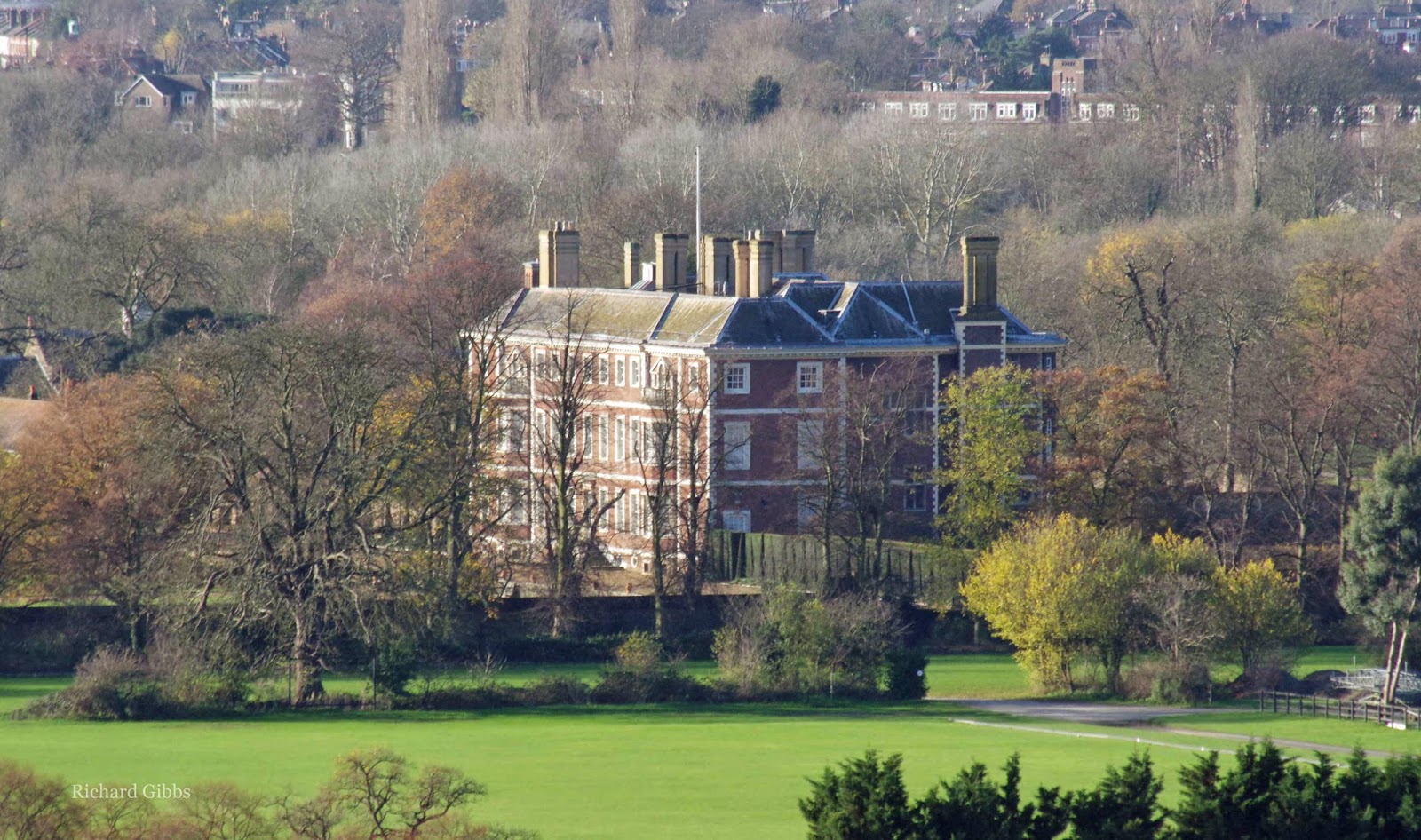 The river flows.....  Central to and its history.  The bridge here, 91 metres long, opened in 1780, is the eighth bridge to span the in Greater London, and the oldest surviving, and it connects the two parts of the Borough of Richmond, the only London Borough to exist on both sides of the river. 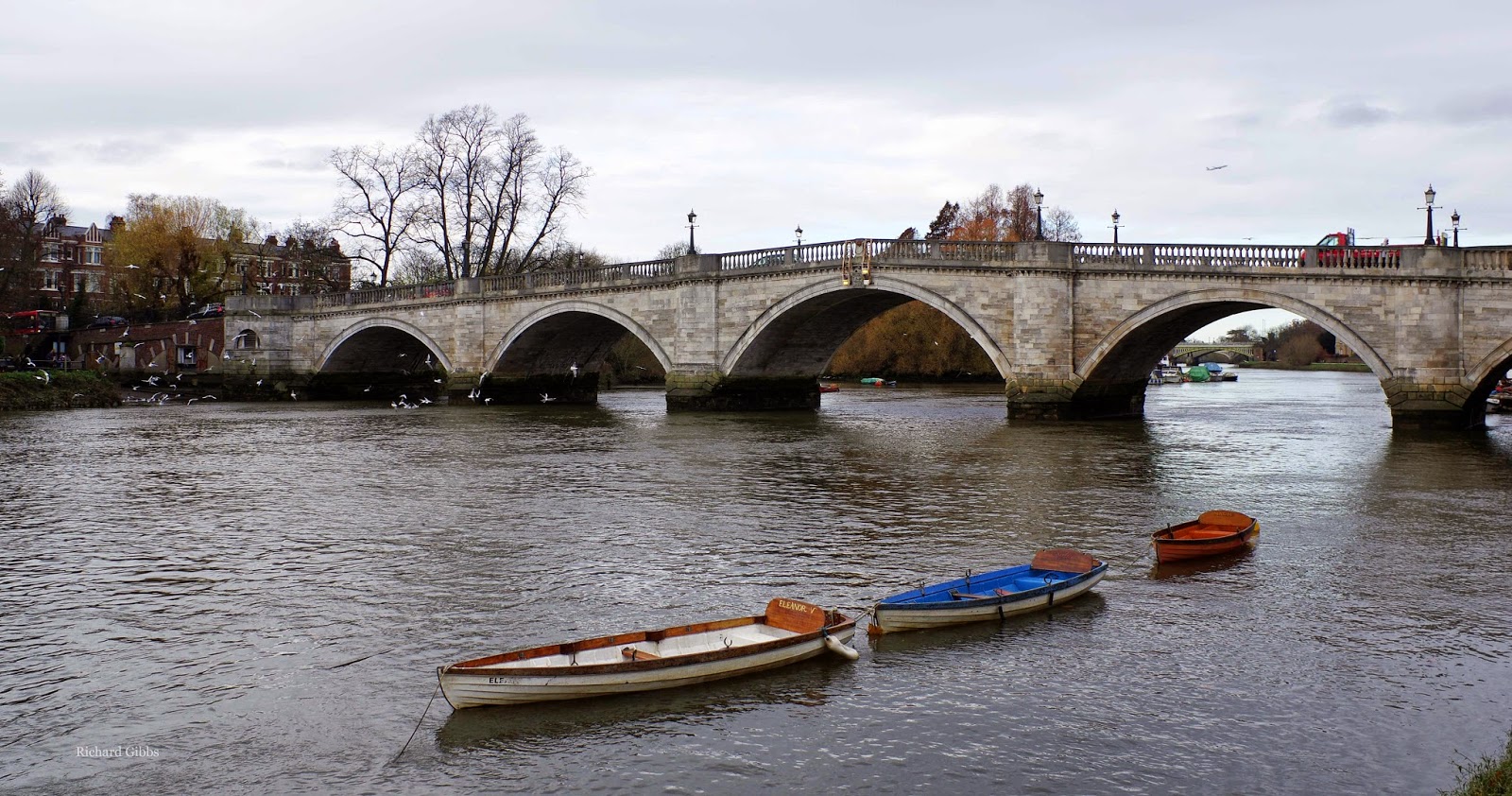 The river flows.....  For centuries the Thames was the preferred means of transport from west to east, and vice versa.  The railway arrived in in 1840, but the river is still busy with craft of many kinds, though these days more for pleasure than for business. 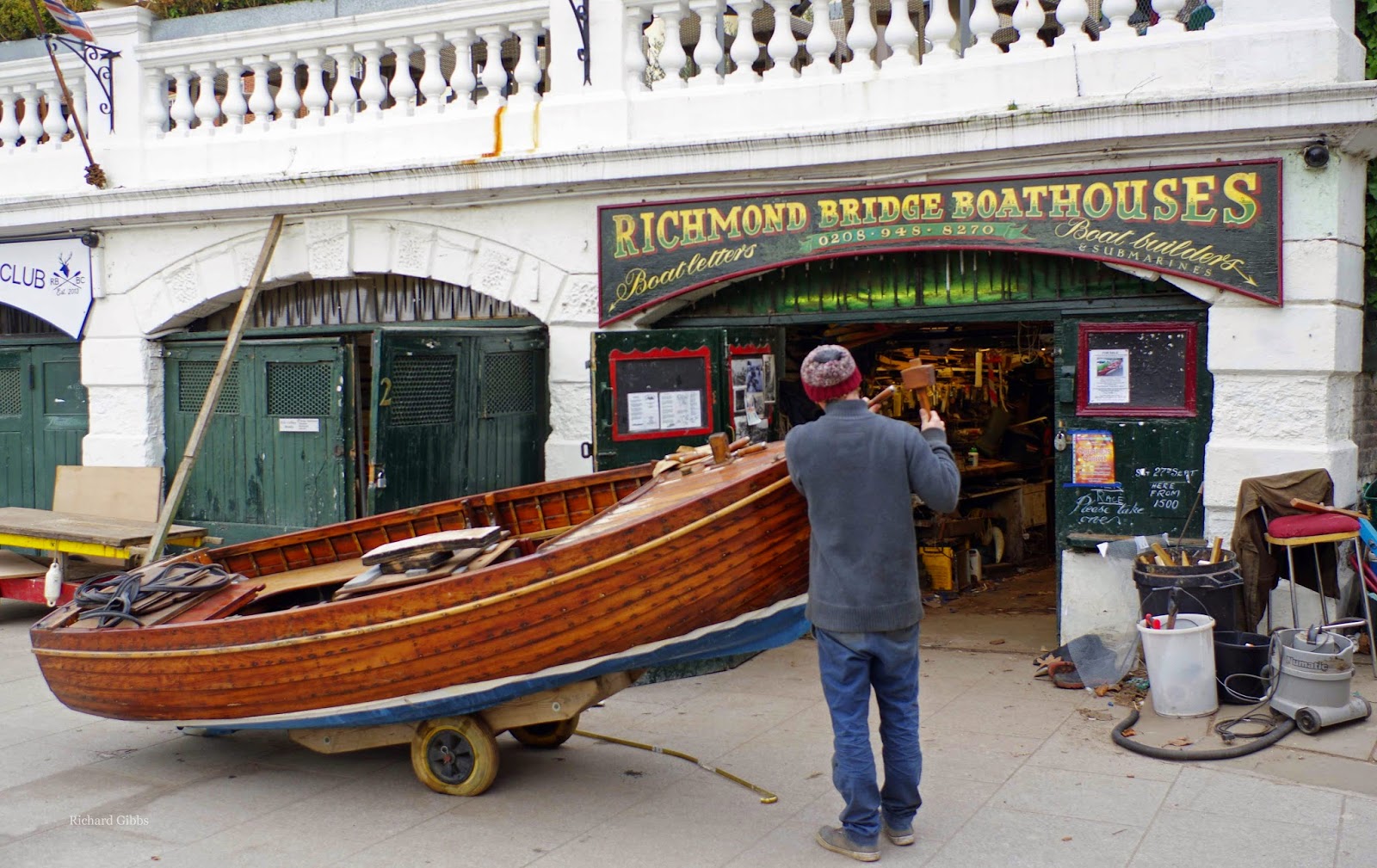 And as it flows, it floods too, with spring tides still causing difficulties for local residents and patrons of certain hostelries..... 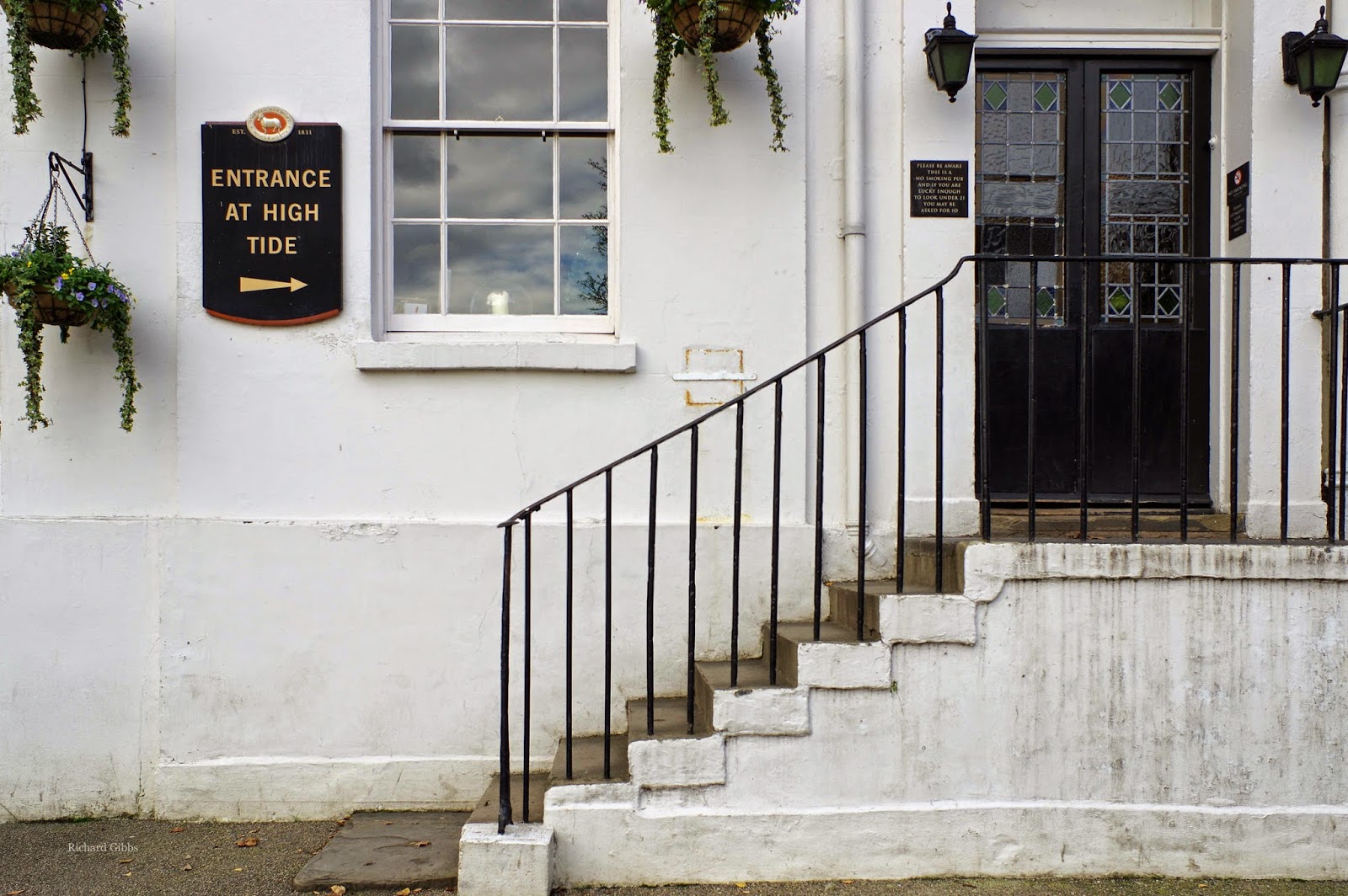 And as it floods it washes the pastures, with Petersham meadows being the nearest true farmland to ..... 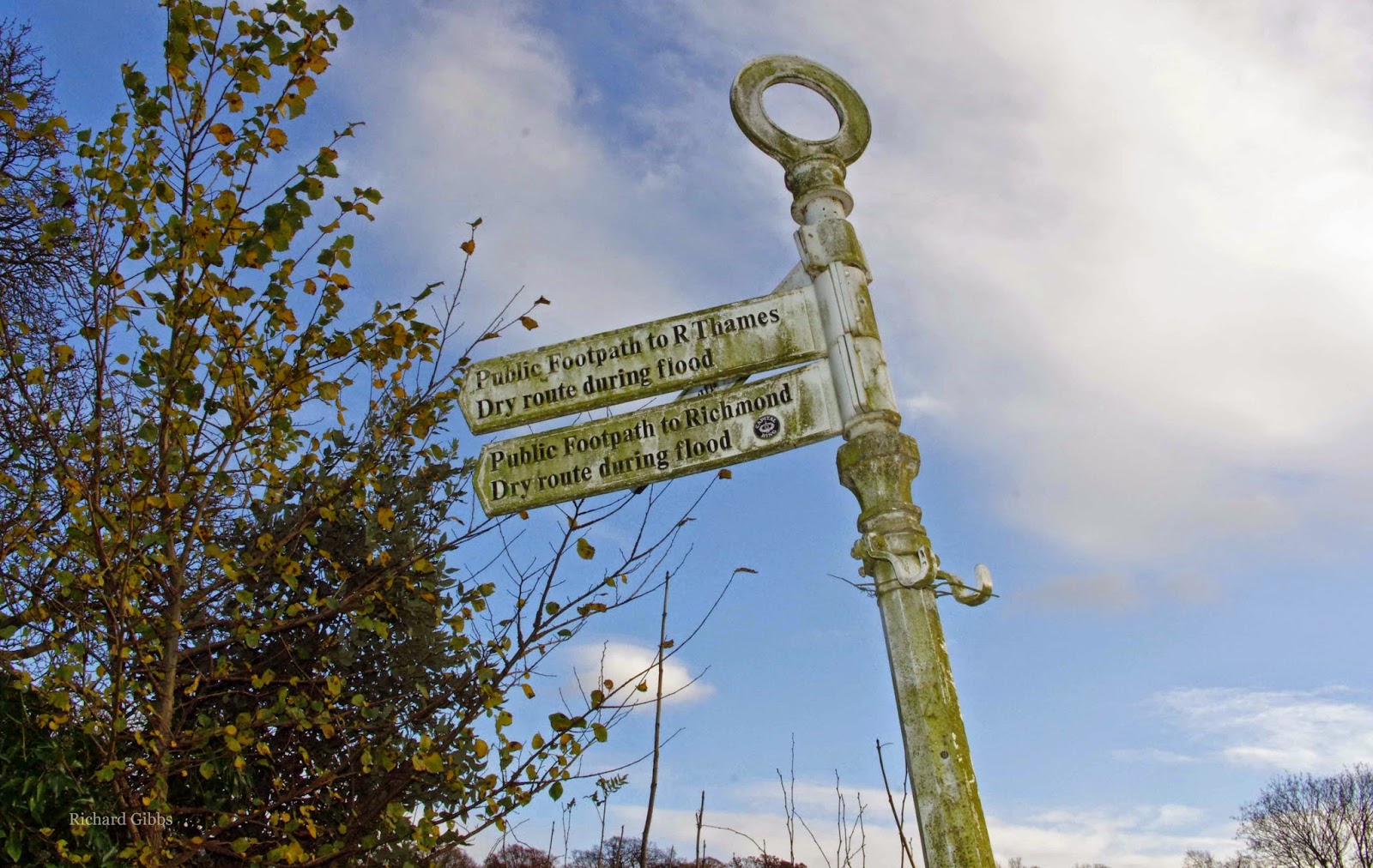 And rising above the meadows, with the only view in London protected by Act of Parliament, is the Grade II listed Royal Star and Garter Home, built by Sir Edwin Cooper, based on a 1915 plan by Sir Giles Gilbert Scott (of the St Pancras Hotel and Bankside Power Station - Tate Modern -  amongst other things).  This great building, which occupies the site of the popular Star and Garter Hotel on , was built to care for servicemen who had been severely disabled during the First World War. Queen Mary, with George V at her side, inaugurated the home in 1924.

The Royal Star & Garter Homes is a charity that provides nursing and therapeutic care to the ex-Service community. Having sold their property on Richmond Hill, they now have two homes, one in Solihull and the other in Surbiton, though they plan to open one more in High Wycombe.

The London Square Company (founded in 2010, the company has already created a development pipeline worth over £1 billion) is now working closely with the Borough of Richmond upon Thames, English Heritage and the local community to create a residential scheme which respects and complements the wonderful heritage of this Grade II listed building.

It is a relief to know this: some people might have worried that the edifice would just be converted into flats.....

For house hunters who are not into makeovers, Richmond has a range of properties, from this five bedroom Terraced house (valued at about £3m) .... 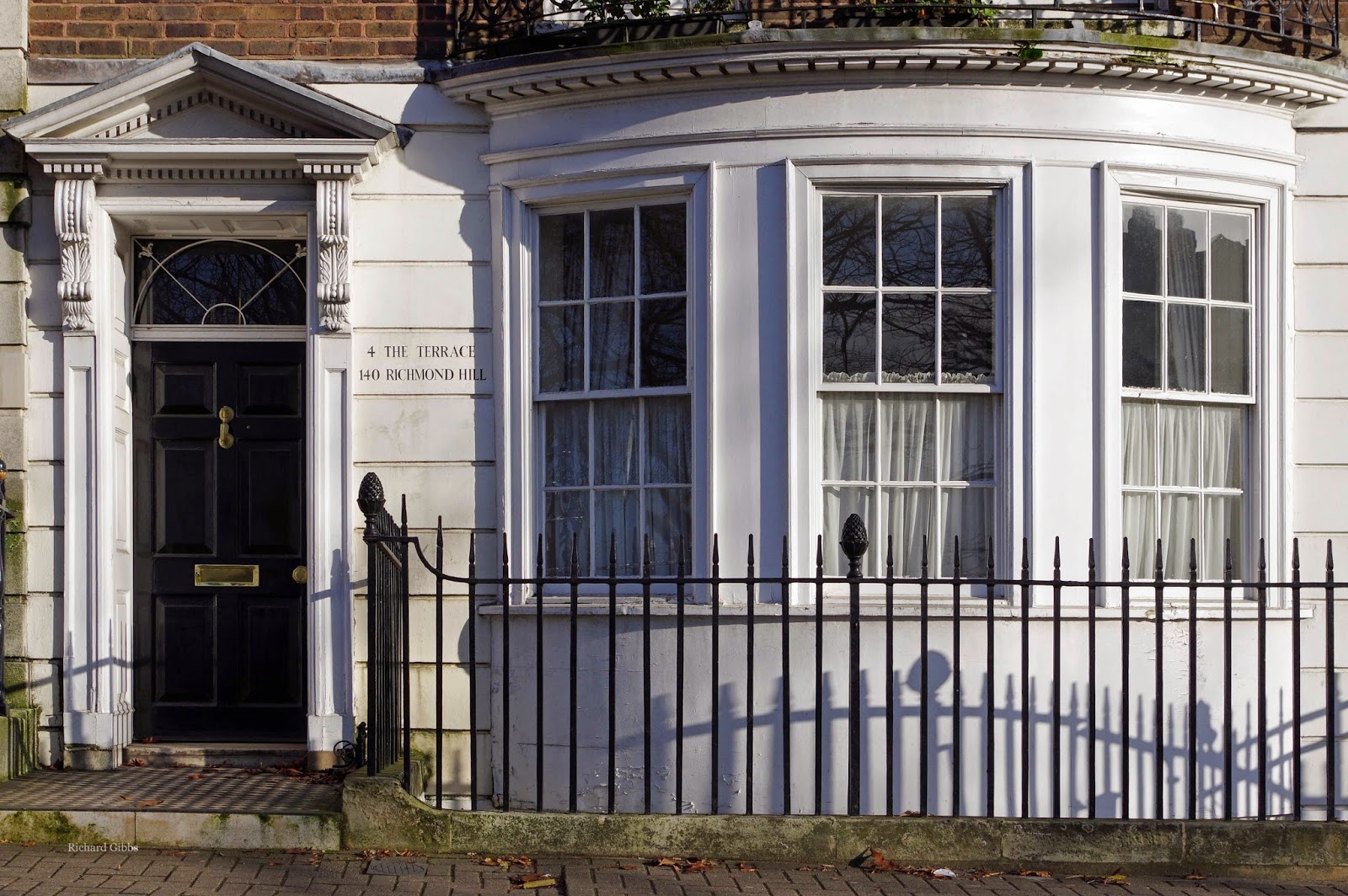 Or for a similar price, but with one less bedroom, there is Wick House, built in 1772 for the painter Joshua Reynolds, who died here twenty years later.... 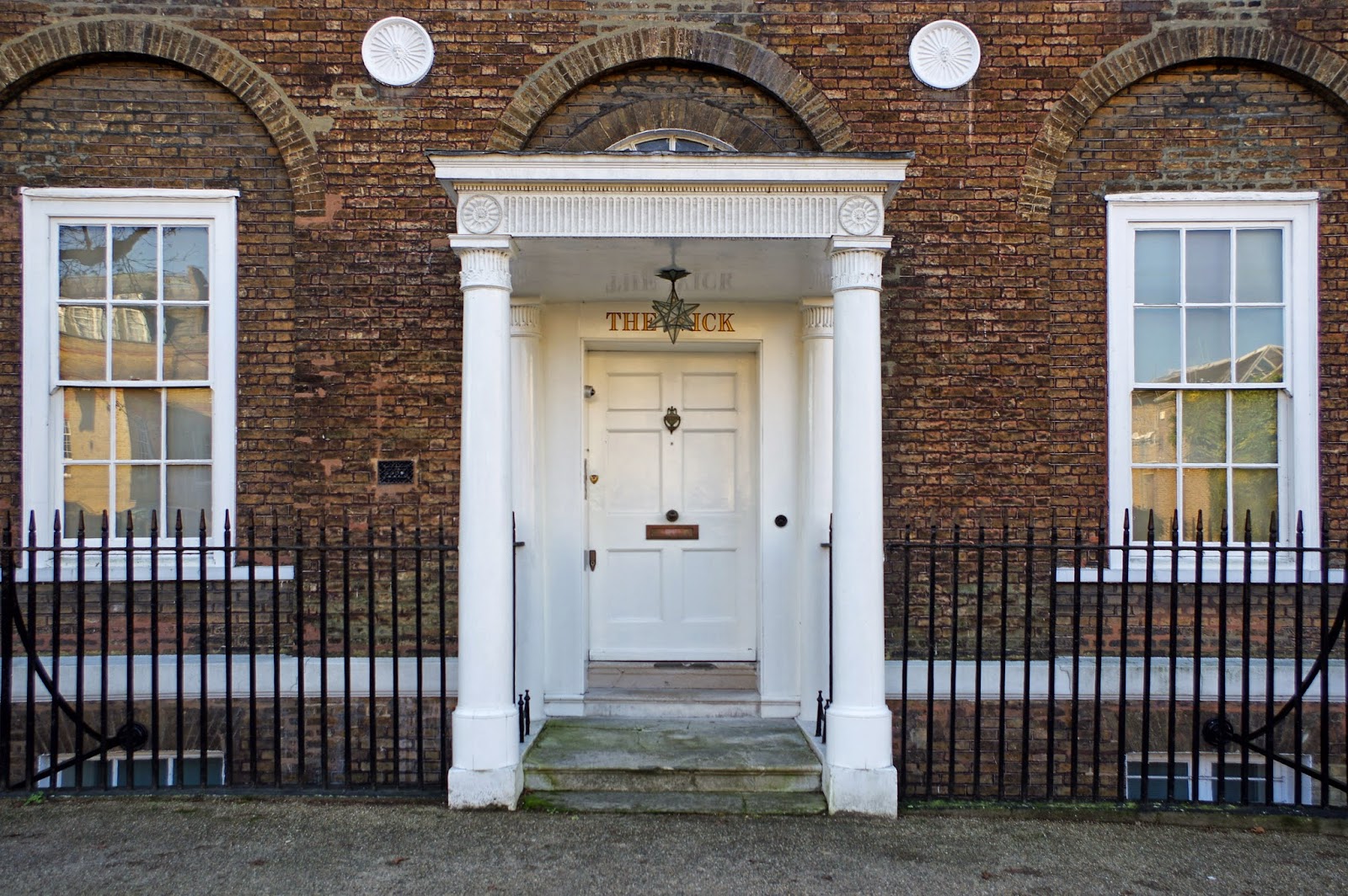 Though for a two bedroom cottage in the price would be a much more affordable one million.... 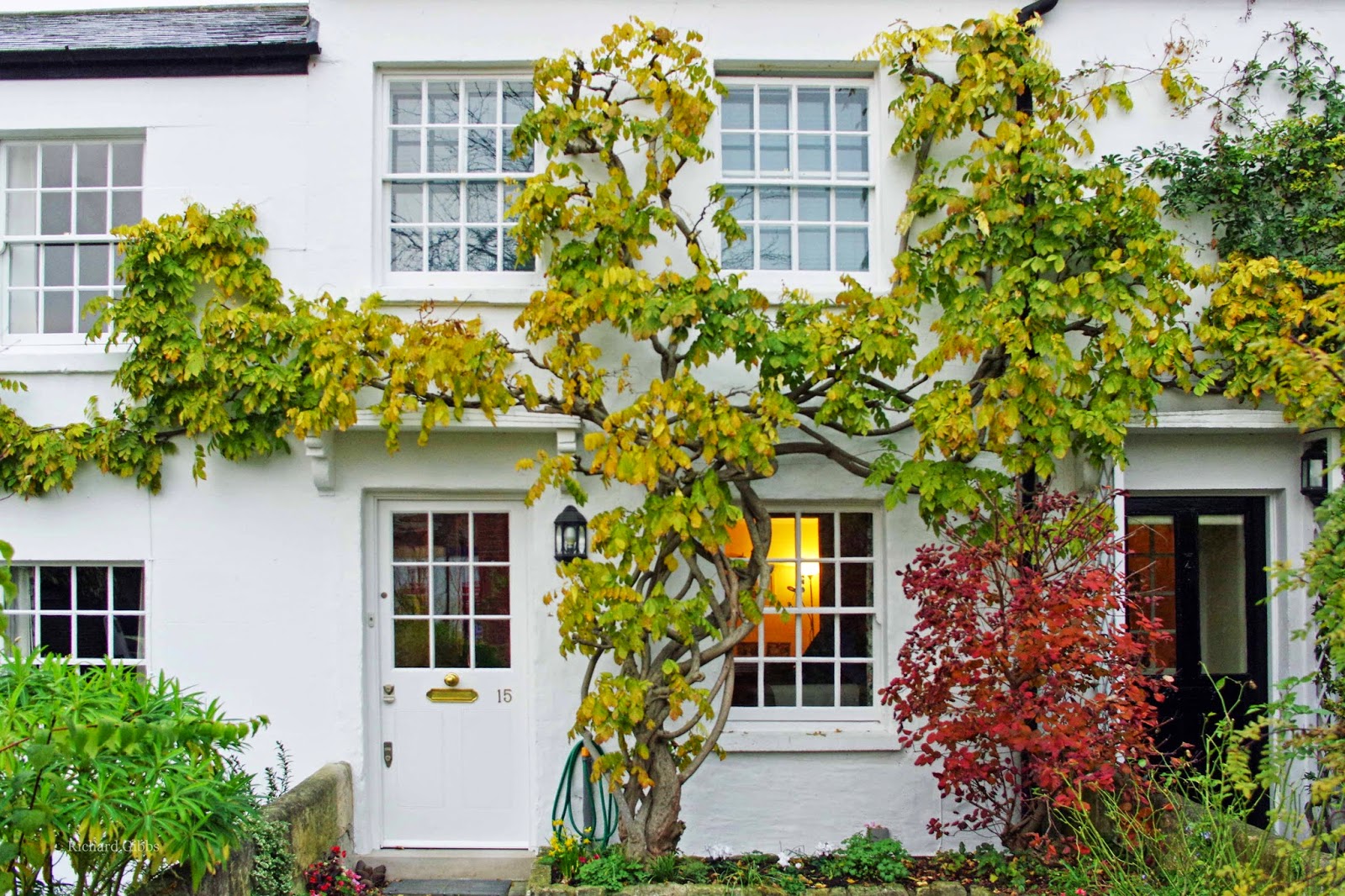 attracts. Clearly the royals of yesteryear found it healthy and restful, and so apparently do the nouveau riche of today (Sir Michael Jagger being but one householder in the area).  Others from the stage and screen have retired here: 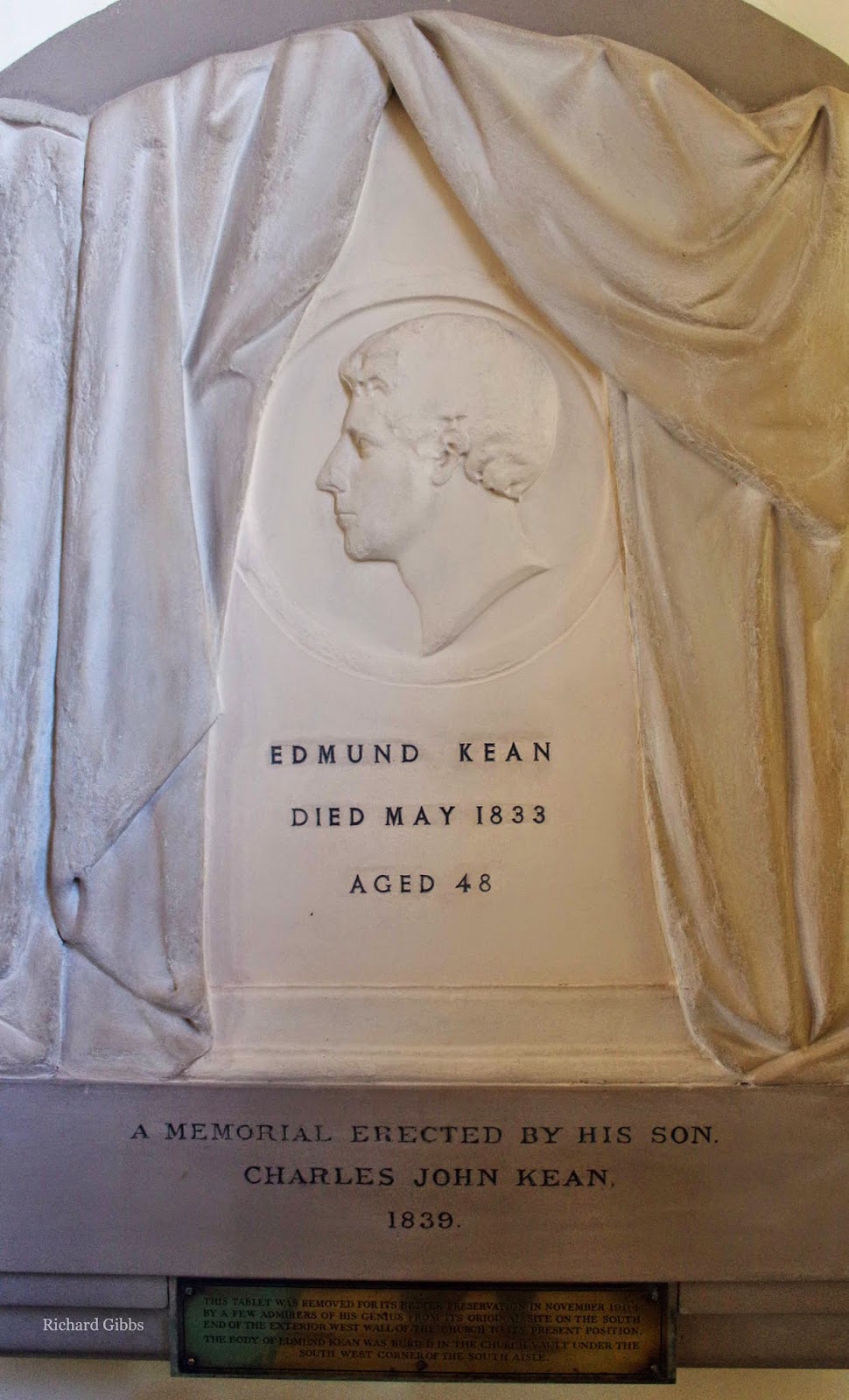 And almost exactly one hundred years ago an earnest, slightly stressy couple moved, initially, into a flat above the delivery entrance to Boots, escaping the intensity of Bloomsbury. 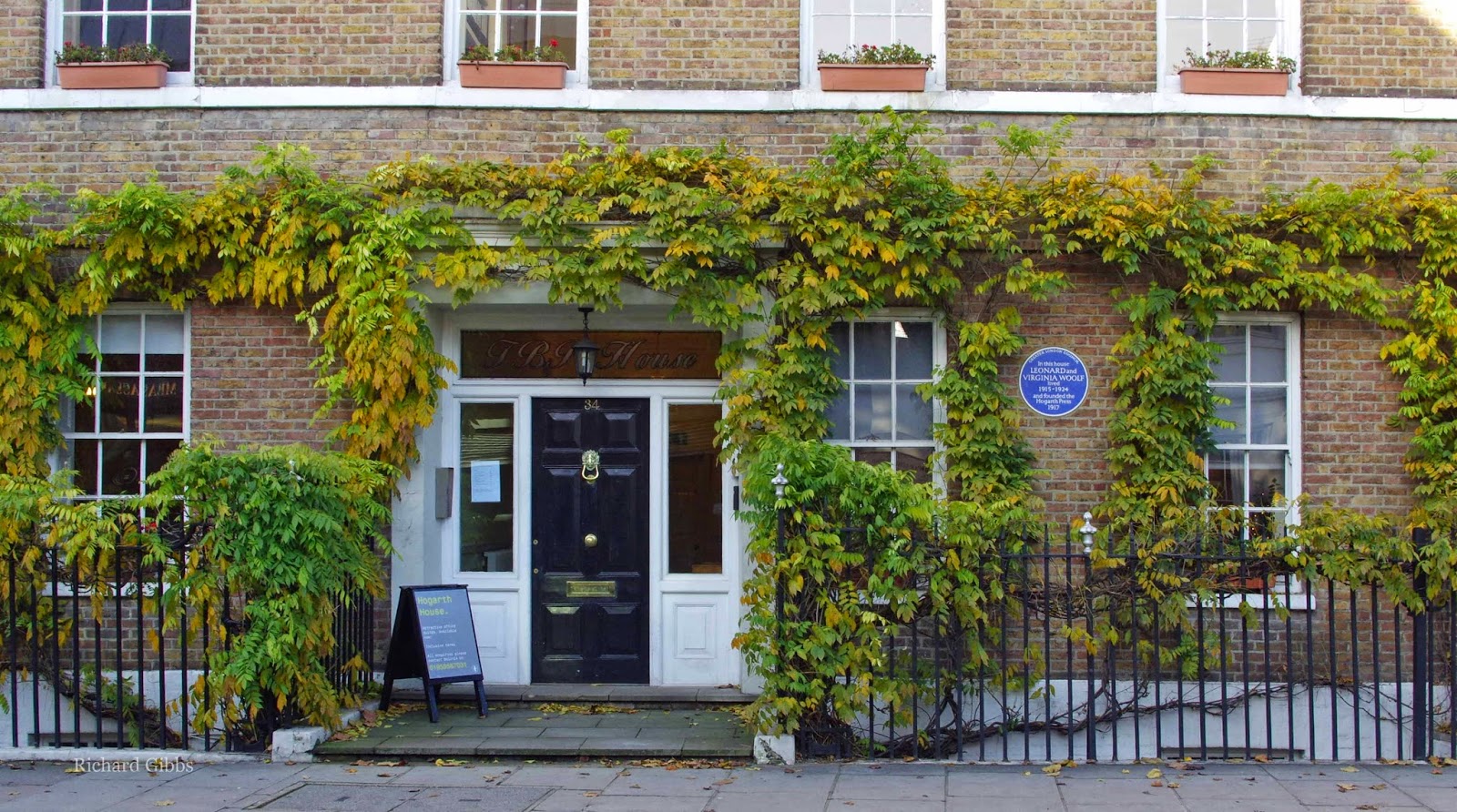 Virginia Woolf had attempted suicide in 1913, and her husband Leonard fancied that Richmond would be more relaxing.  The lady soon settled in and was often to be seen walking her dog, Grizzle, near the river, which she referred to as my river.....

Unfortunately her recovery was short lived, and just as the couple was about to move into Hogarth House in March 1915 she had a breakdown and was admitted to a nursing home.  Leonard moved in himself, and then Virginia joined him in April, attended by four nurses. 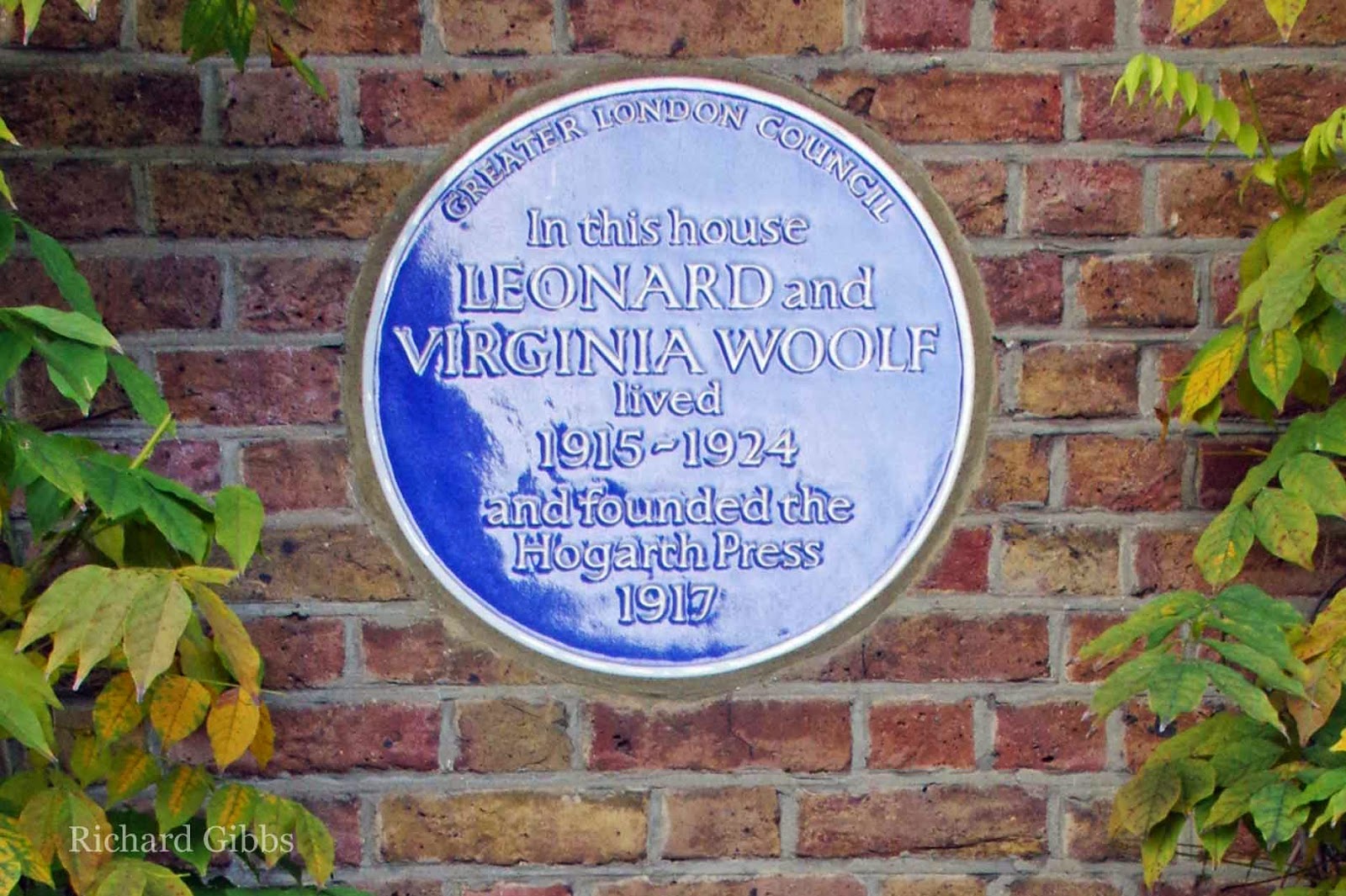 They founded the Hogarth Press in March 1917, using a small, hand-operated press, and began by publishing some of their own short stories.

Then, in November 1918 they were visited by an American who had just turned thirty-one. Within a couple of years, with a little help from Ezra Pound, Thomas Stearns Eliot produced The Waste Land, first published in magazines on both sides of the Atlantic. Virginia had noted that this was a very strange young man.  On June 18th, 1922, he recited the poem to the Woolfs (Woolves?) in their home. Mrs Woolf noted in her diary that He sang it and chanted it, rhymed it. It has a great beauty and force.....  What connects it together, I'm not so sure.

In September 1923 the Hogarth press published 450 copies of the first UK book edition of the 434 line poem.  The type was set by Virginia herself. 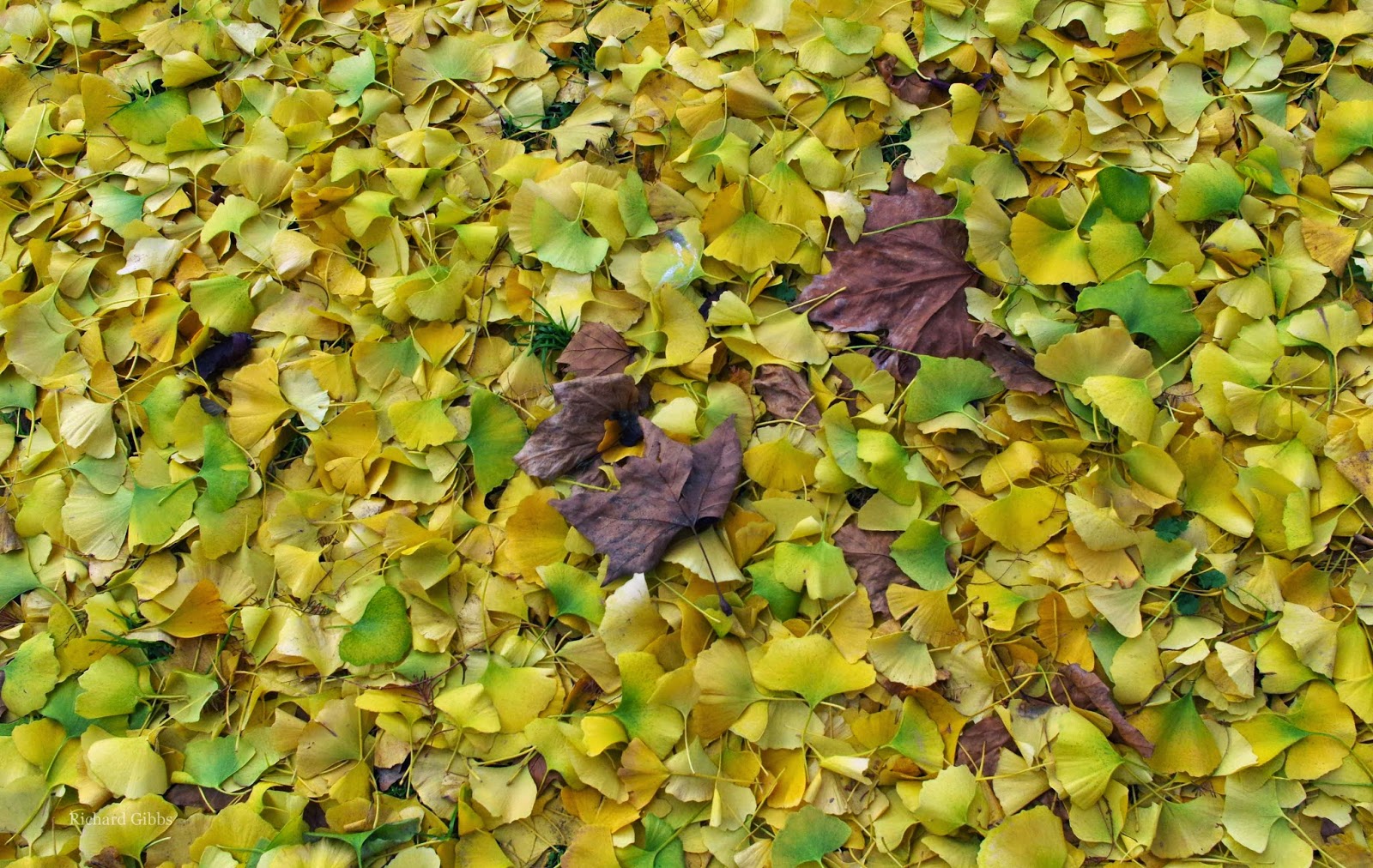 Highbury bore me.  Richmond and Kew

Undid me.  By Richmond I raised my knees

Supine on the floor of a narrow canoe.

My feet are at Moorgate, and my heart

Under my feet.  After the event

The world is what it is; men who are nothing, who allow themselves to become nothing, have no place in it.

A Bend in the River


(NB: Naipaul's river was an unspecified African one, probably the Congo, but through gossamer threads I linked his bend and his river to Conrad, and Eliot, colonialism and nothingness - though I realise I am probably stretching all this beyond acceptable limits!)

The stern was formed

The peal of bells