In a neat little town they call Belfast


Apprentice to trade I was bound 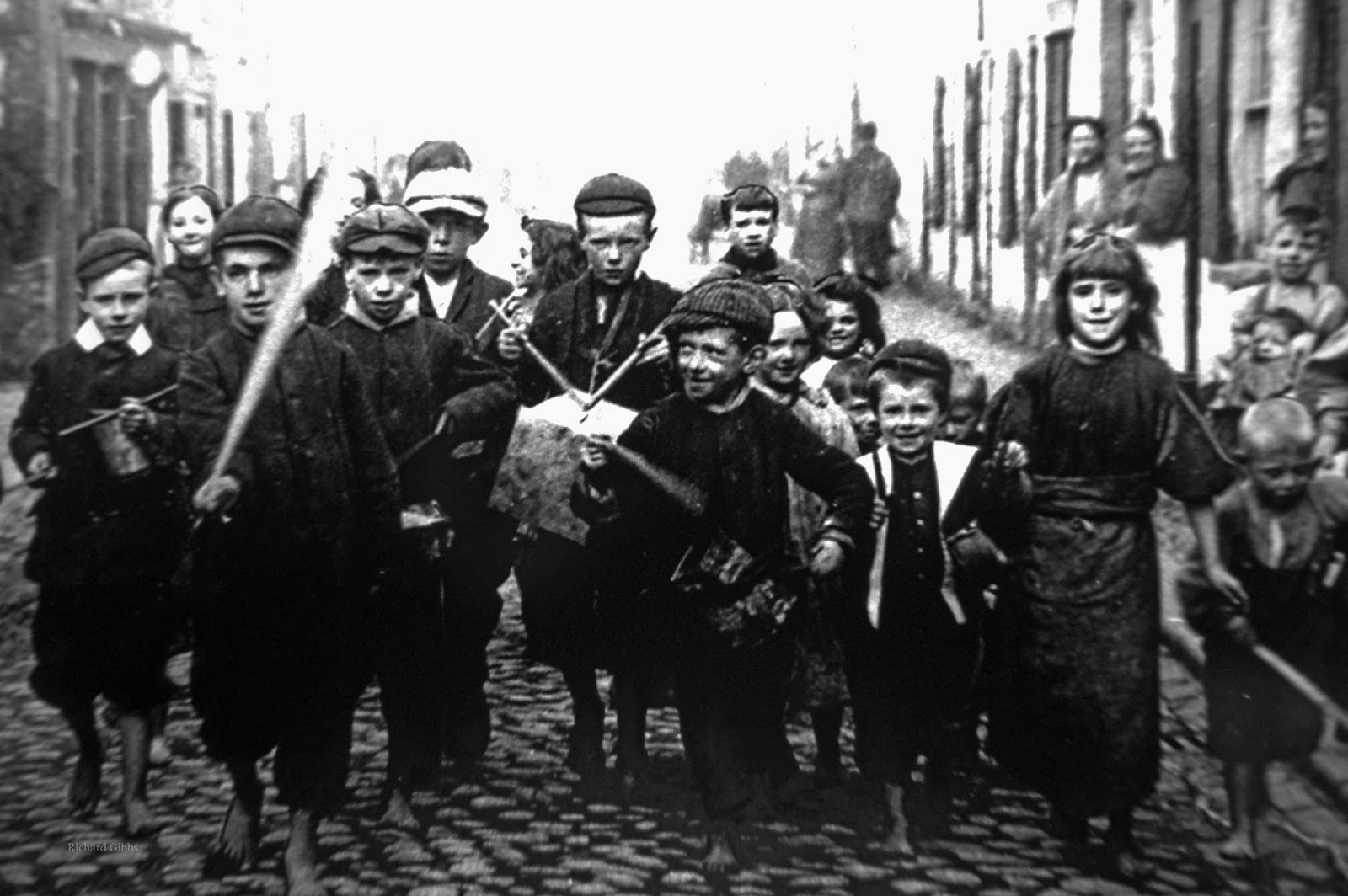 Belfast is a comparatively little town (just over a quarter of a million inhabitants, 17th largest in the UK and only granted city status in 1888), but it is stretching a point to call it neat.....  It was once a centre for the linen, tobacco and rope-making industries and then, with Harland and Woolf (created in 1861) it became an important centre for ship-building (though now 75% of their work is in renewable energy).  Torn apart by the Irish War of Independence, then heavily bombed in the second World War and then again severely damaged by the sectarian violence of the Troubles (1,600 people killed here between 1969 and 2001), Belfast has had a turbulent history.


I thought her the queen of the land


And her hair, it hung over her shoulder


Tied up with a black velvet band

It was ship-building that really put Belfast on the map, however, when RMS Titanic set sail in 1912, and, with the opening of Titanic Belfast in 2012, ironically it was the disastrous collision with an iceberg that is largely responsible for renewed interest in the city.  Having lost 100,000 manufacturing jobs since the 1970s, the influx of over eight hundred thousand visitors to this attraction in its first year has led to thousands of new jobs in the tourism industry.

With this iconic new building, we are invited to visit the world's largest Titanic (oxymoron? Ed) visitor experience (how do you measure the size of an experience? Ed), located at the birthplace (inappropriate anthropomorphism, Ed) of RMS Titanic.....  Through 9 interactive galleries visitors can fly (er, not really, it's a cable car, Ed) through the shipyard, travel to the depths of the ocean (it's a film, Ed) and uncover the true legend (true? or legend? Ed) of the Titanic, in the city where it all began.....


Actually, it is pretty good, and I was almost sympathetic to the kid in front of me who, when questioned why he wasn't in school, responded gleefully, It's my birthday!

There are some informative displays and some highly effective simulations, including a space in which you are made to feel that you are on a lift ascending through the ship.  I haven't felt so queasy since I flew over the Victoria Falls in the London IMAX! 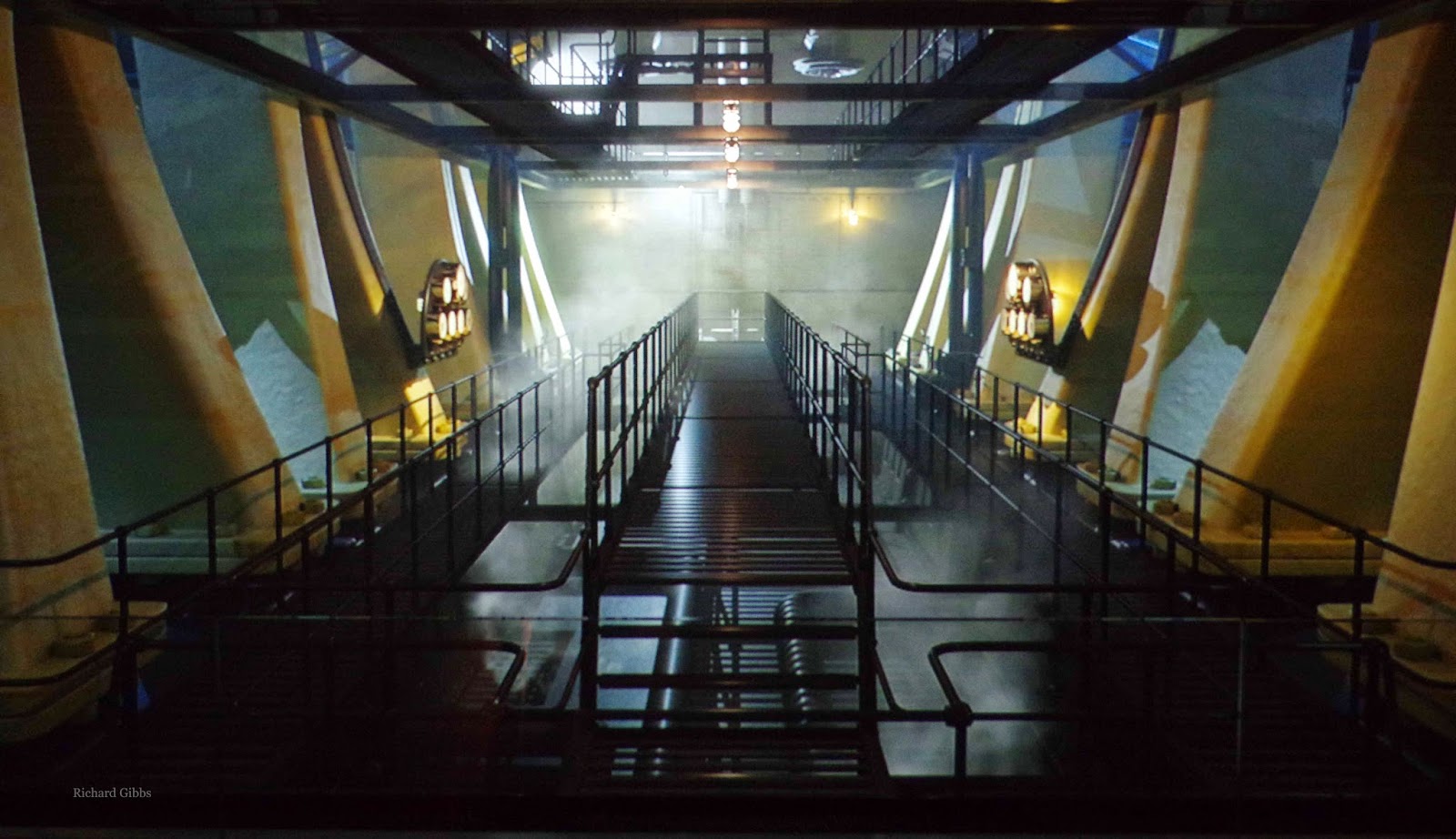 In the Titanic Quarter, apart from the derelict Harland and Woolf shipyards with their iconic cranes 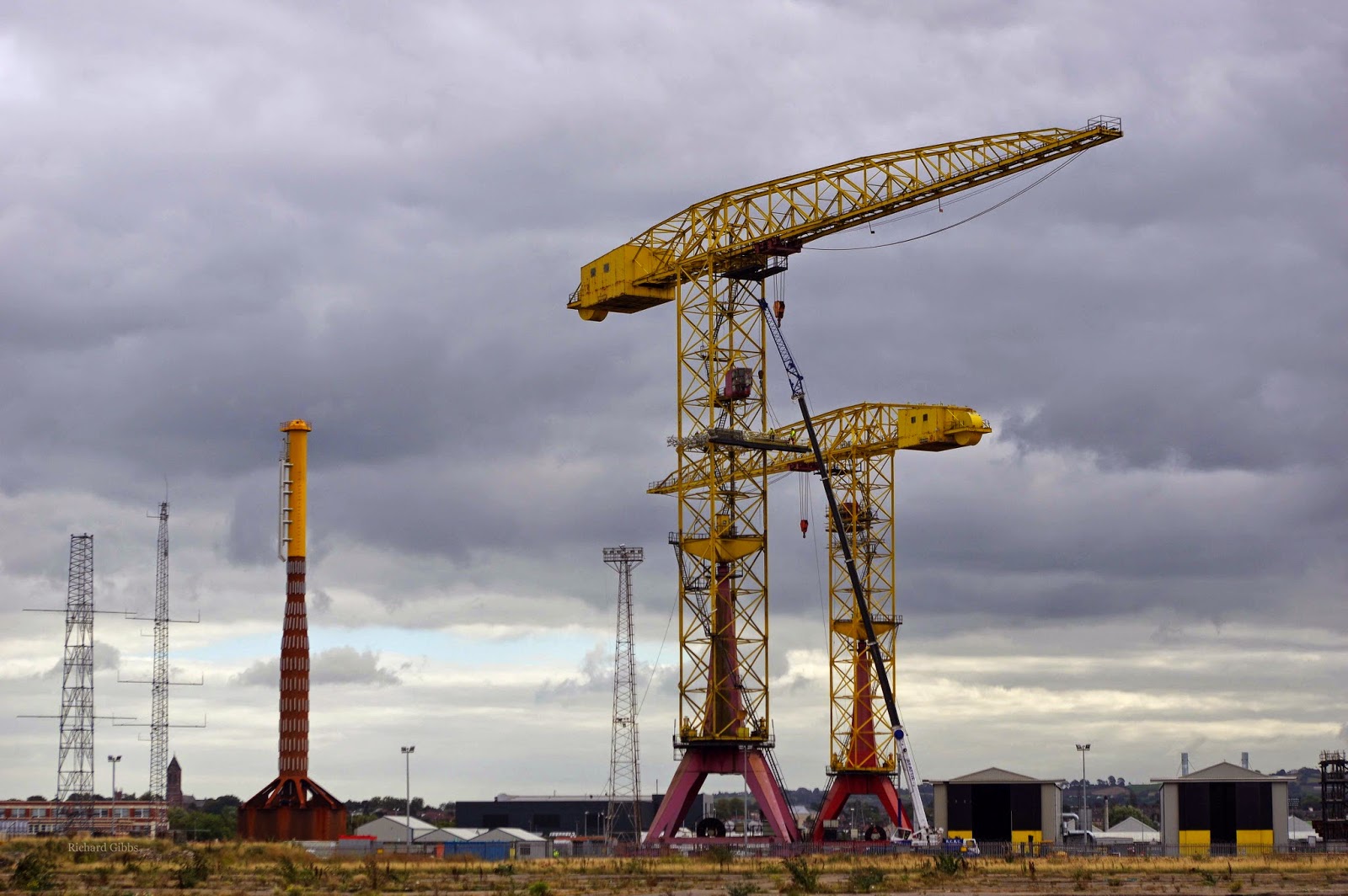 and the vast film studios (Titanic Studios - The Paint Hall) where (under high security) the first series of Game of Thrones was produced, there are other reminders of the Titanic and Belfast's engineering past.  HMS Caroline, a First World War light cruiser and survivor of the Battle of Jutland,

lies in the Alexandra Dock (in 1885 Princess Alexandra cut the first sod....)  Not far beyond is the dry dock where Titanic was fitted out.  This vast space, and the adjacent Pump-House, 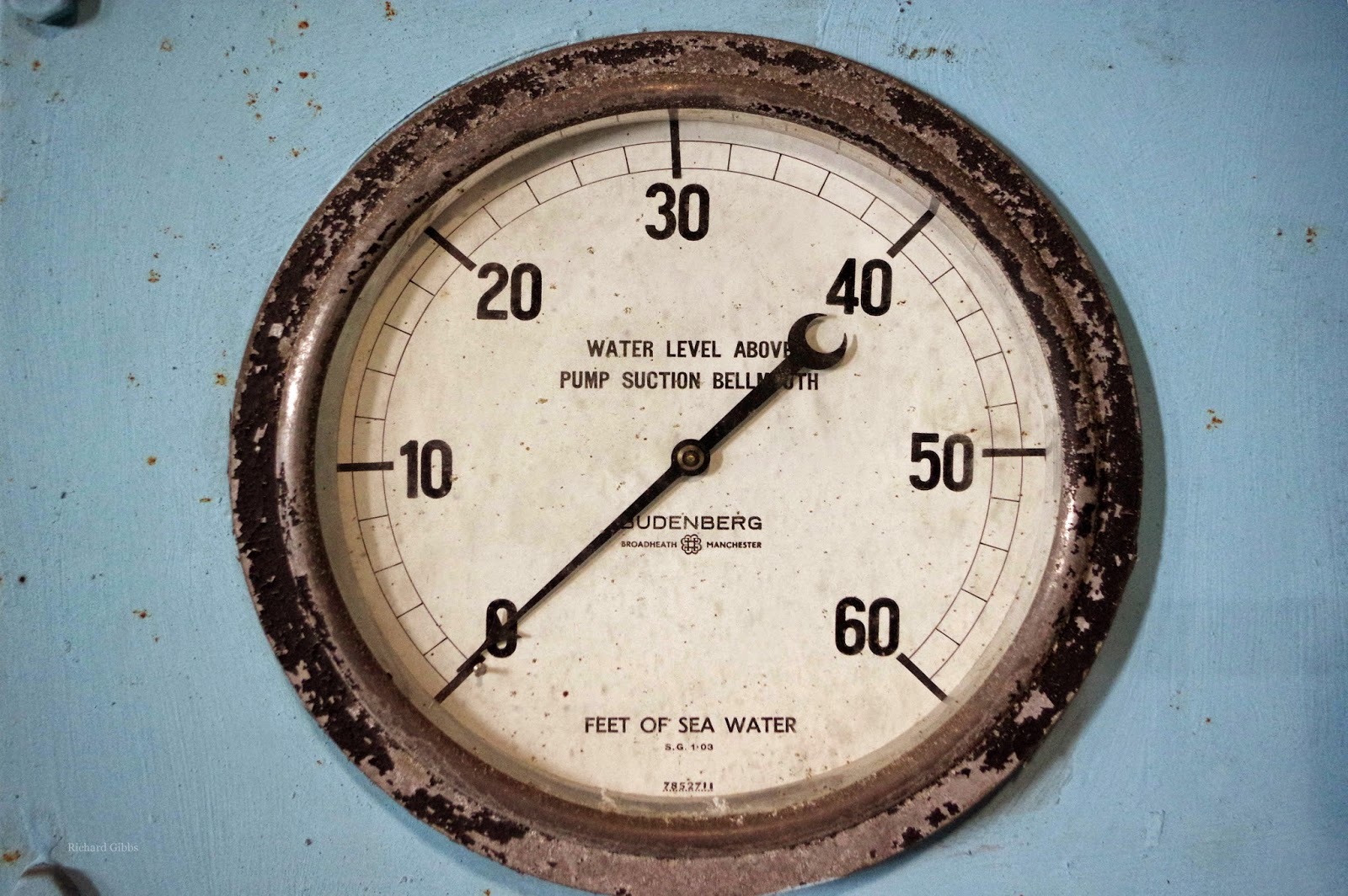 perhaps serves as a better memorial to that ghostly wreck, but maybe that's a matter of taste? 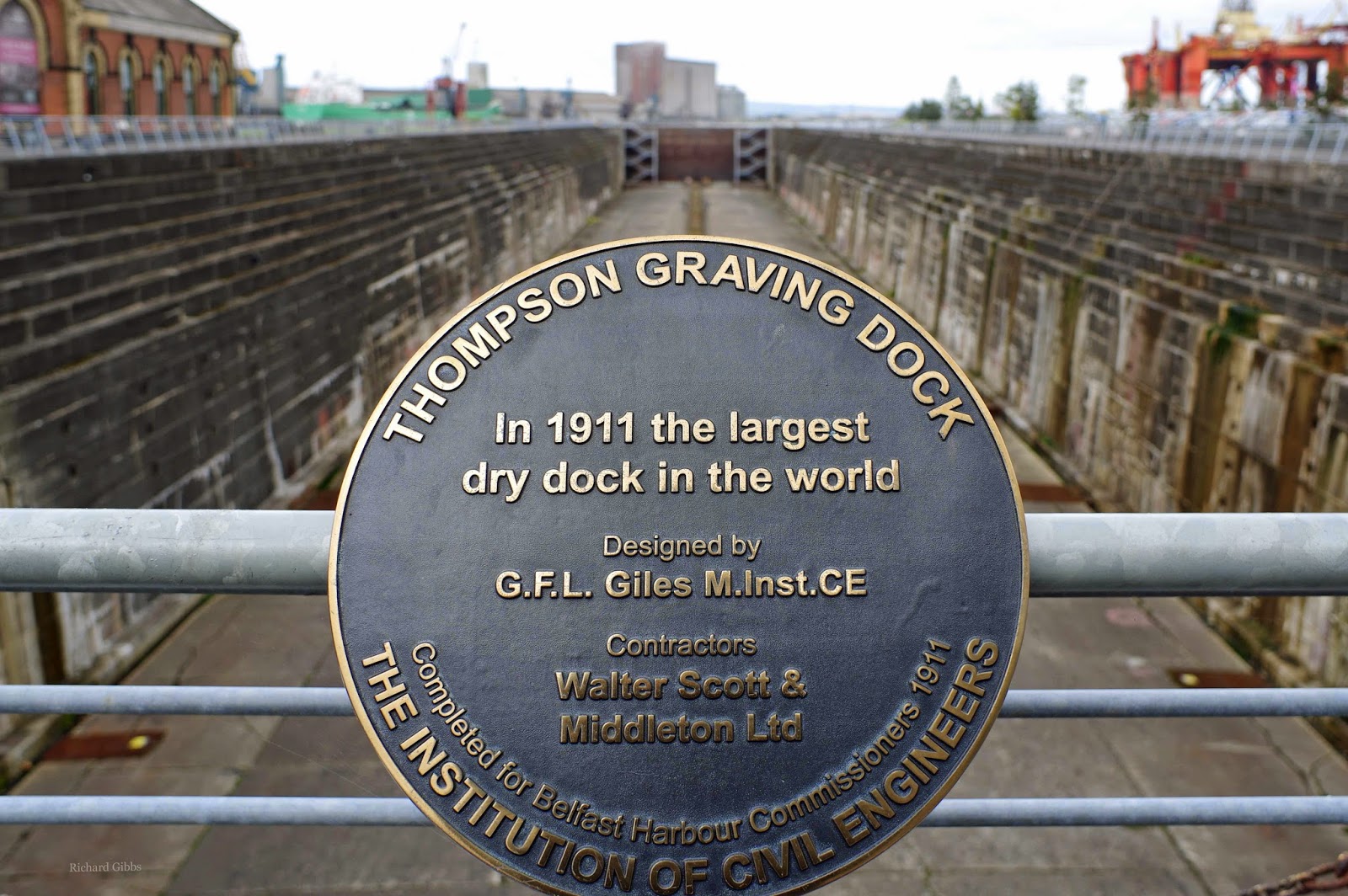 The caisson gate to this dock is still there, rusting gently in the damp air.  It weighs 1000 tonnes and could be opened in six minutes by water pressure.

There are other reminders of the Titanic in Belfast - not only in the numerous borrowings of the name: 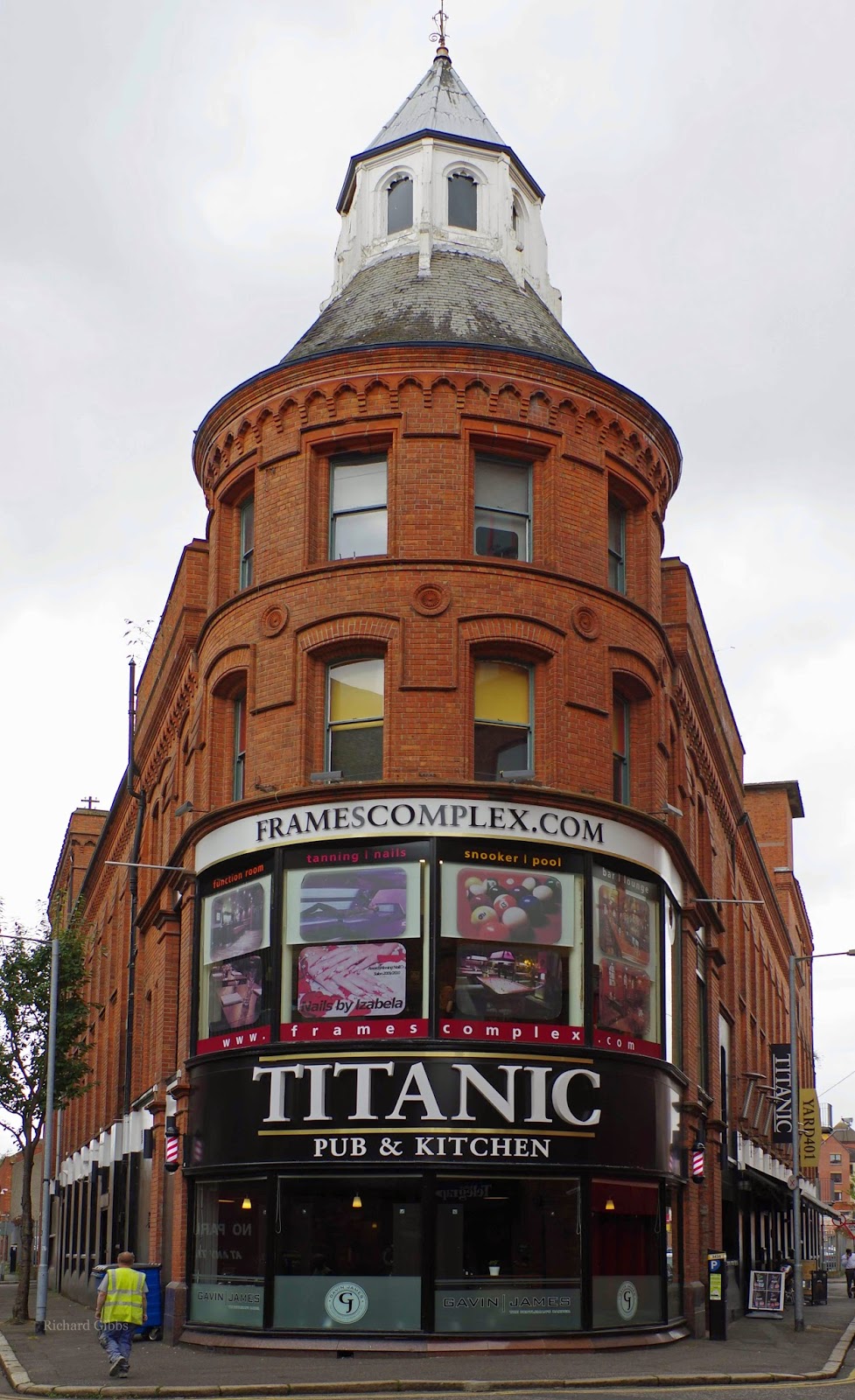 But also in the shadow that inevitably hangs over the city.  Outside the imposing City Hall, with its statue of Queen Victoria standing guard, there is the Titanic Memorial Garden, with the names of the dead listed in bronze. 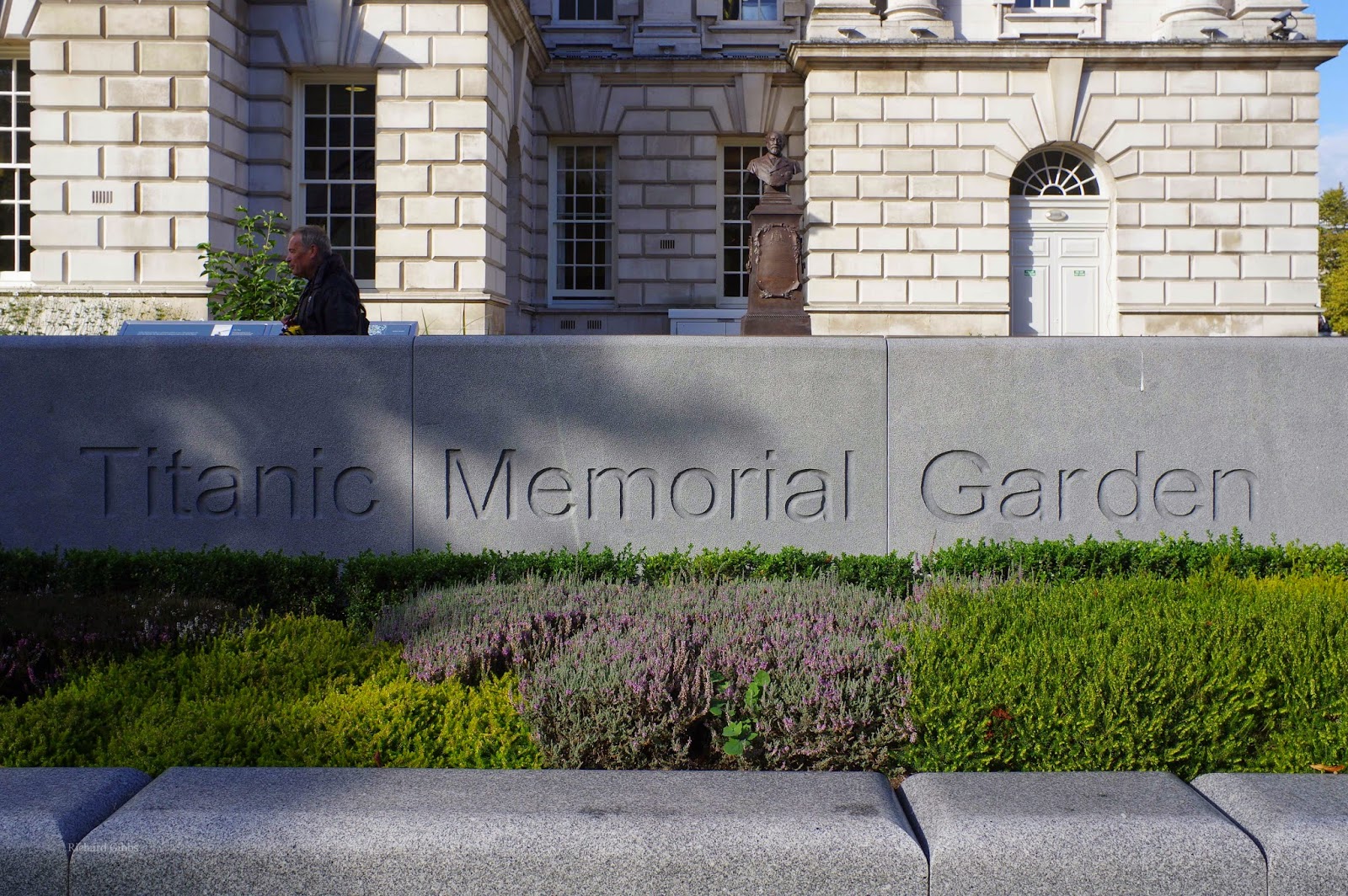 Among the names I note one of my relatives, and pause for a moment, a watery chill running up my spine. 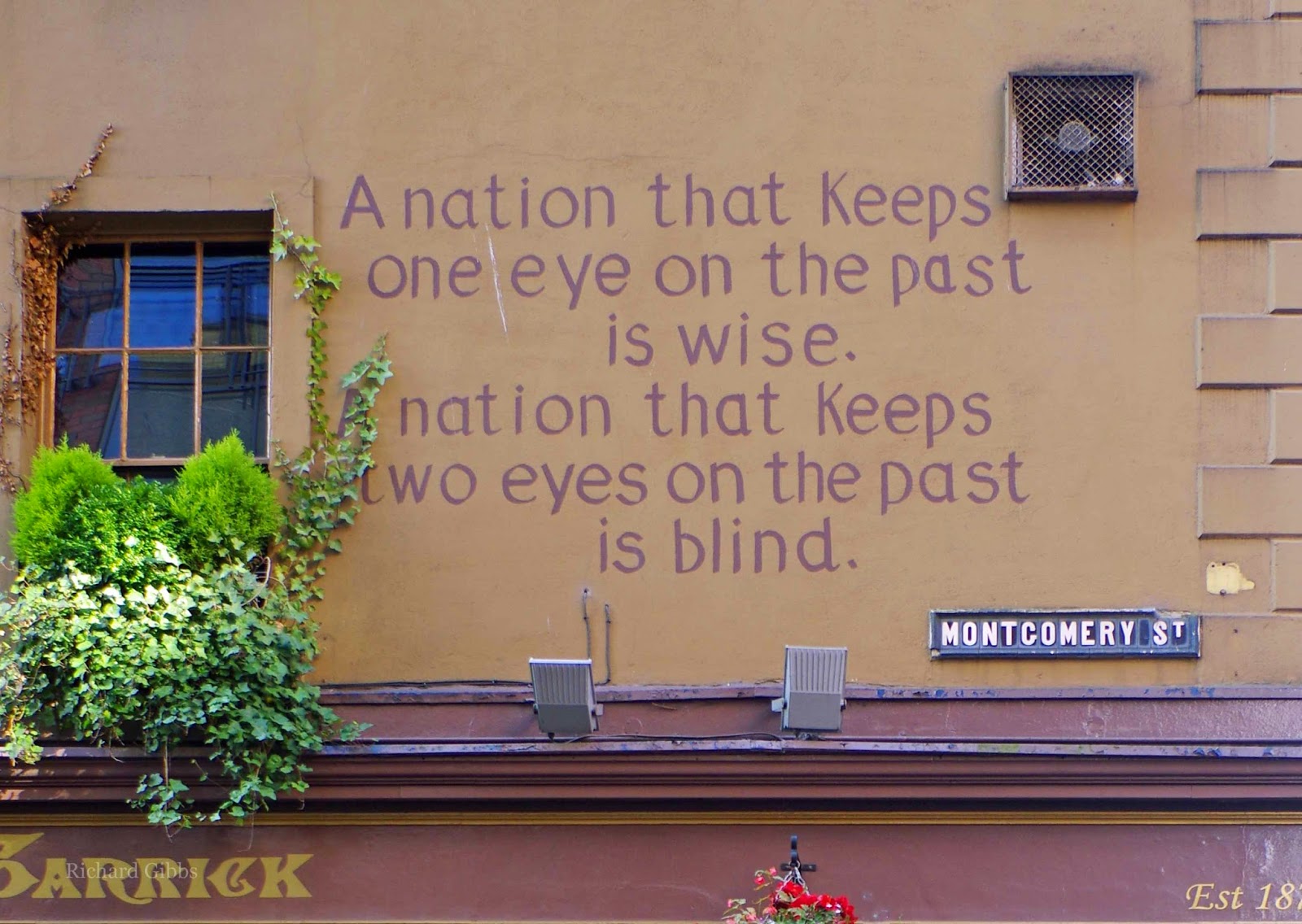 But it is time to move on.  There is more to Belfast than the true legend of the largest Titanic visitor experience! 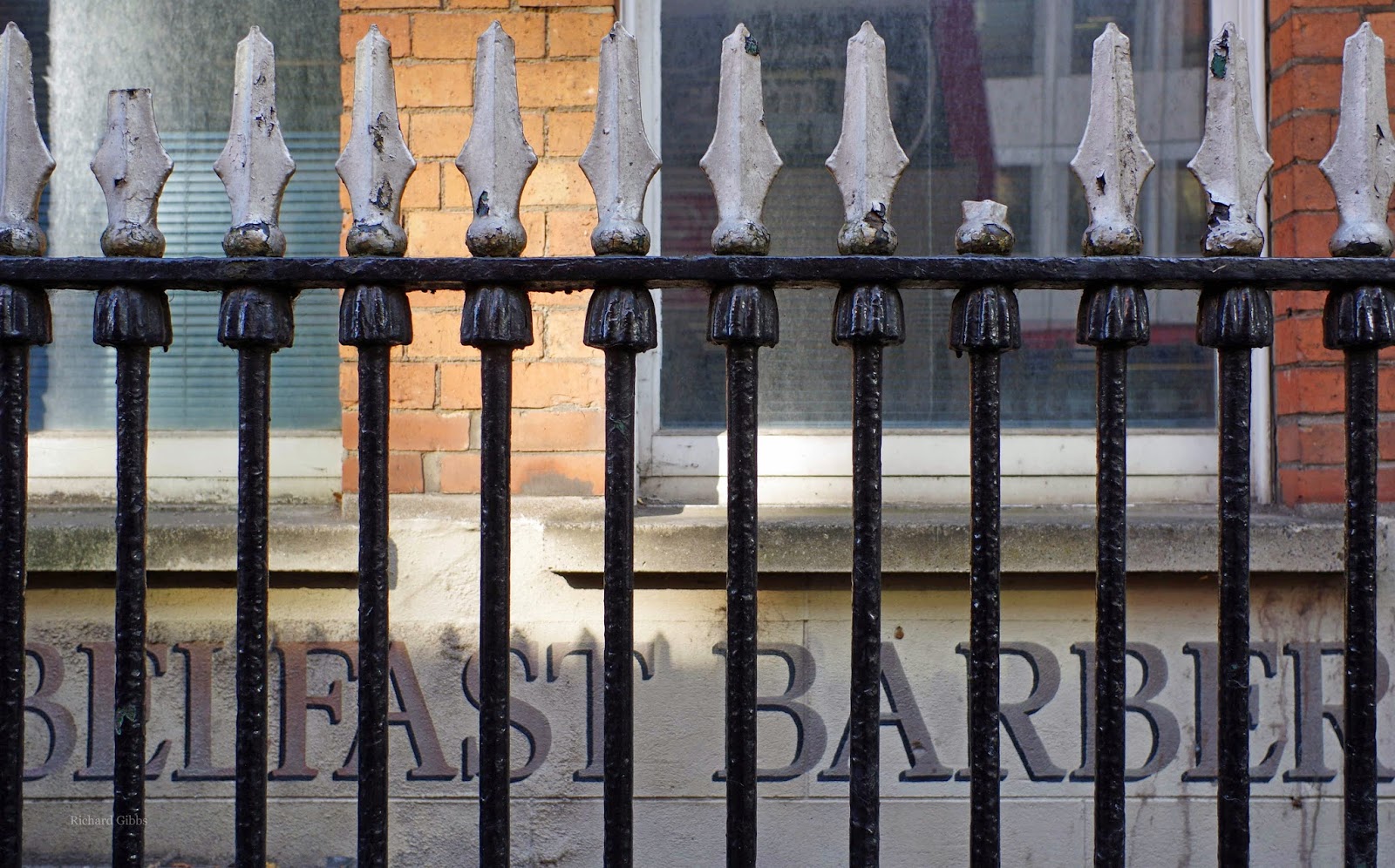 There are bars, like the magnificent Crown, where real gas lamps and church pew like stalls create an intimate, somewhat Victorian atmosphere: 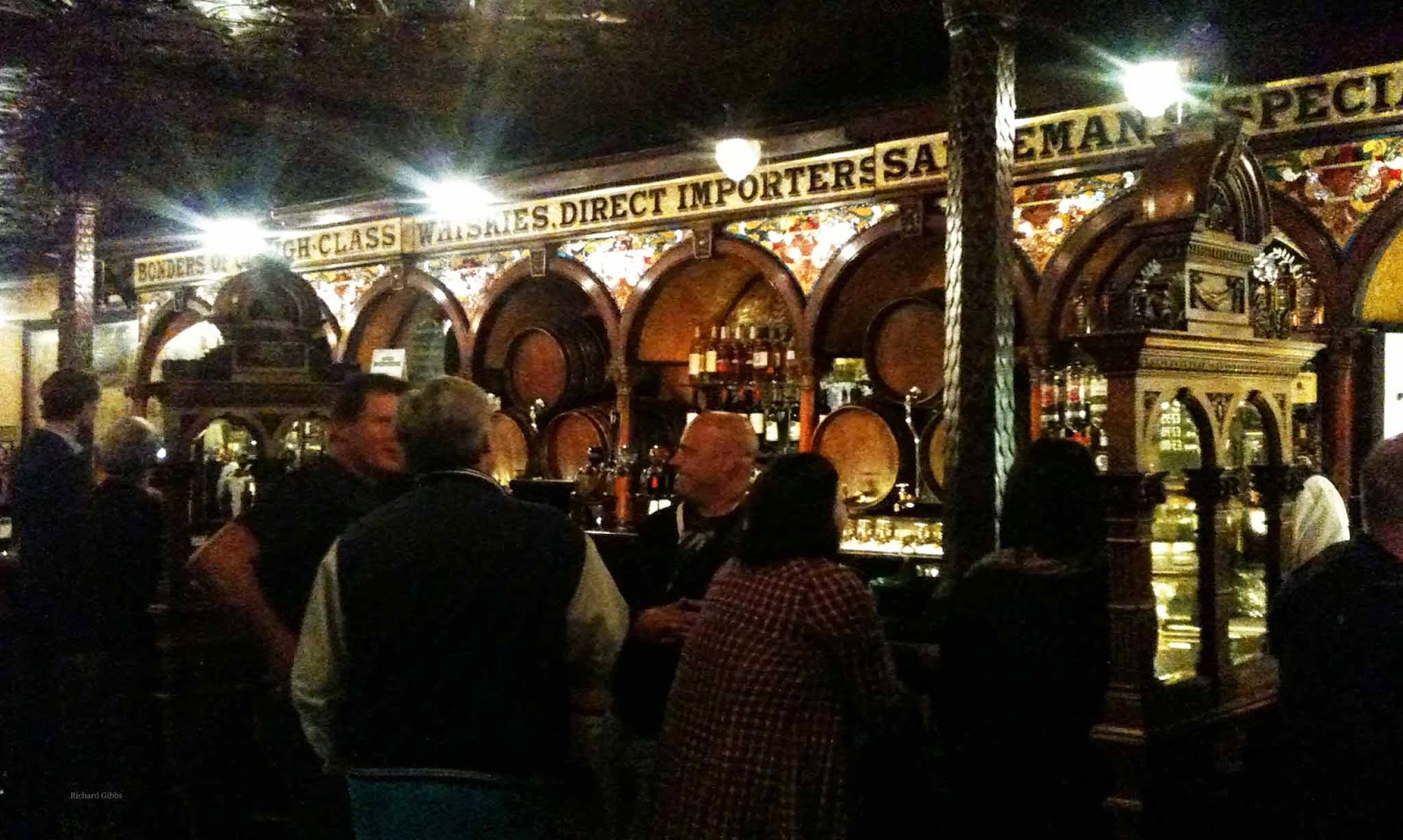 Or like the Sunflower, on a quiet street behind the Library, where graffiti prohibits topless sunbathing (Ulster has suffered enough!) 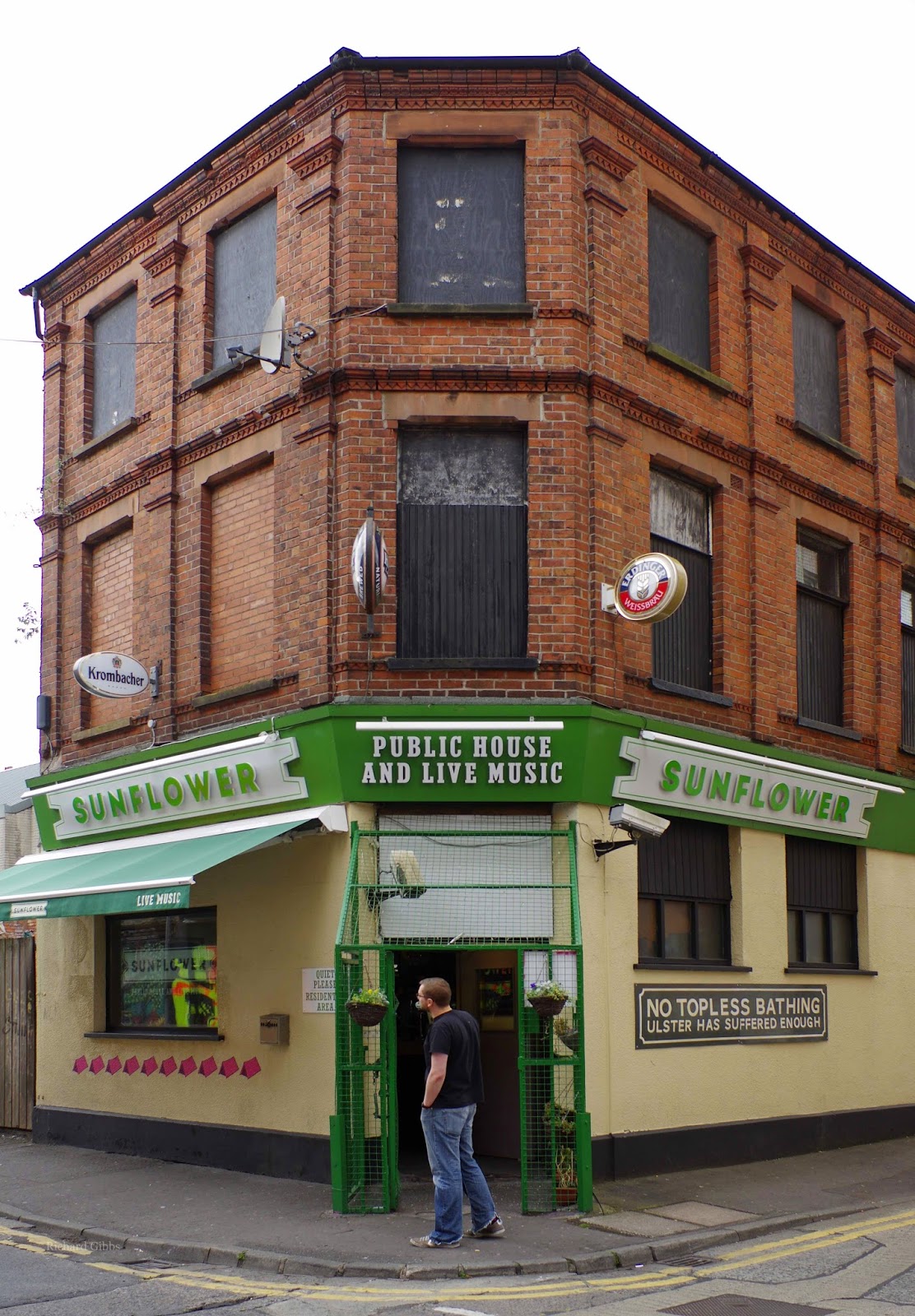 And opposite there are vibrant murals, one celebrating the sunflower.


Murals are a feature of Belfast art and have been since the Loyalist mural tradition started in 1908 (the Republicans didn't join in until 1981) though some may be more an expression of modern urban angst, or even a comment on the increase in mural tourism (an American tourist had his camera stolen in the Falls Road while I was there)...... 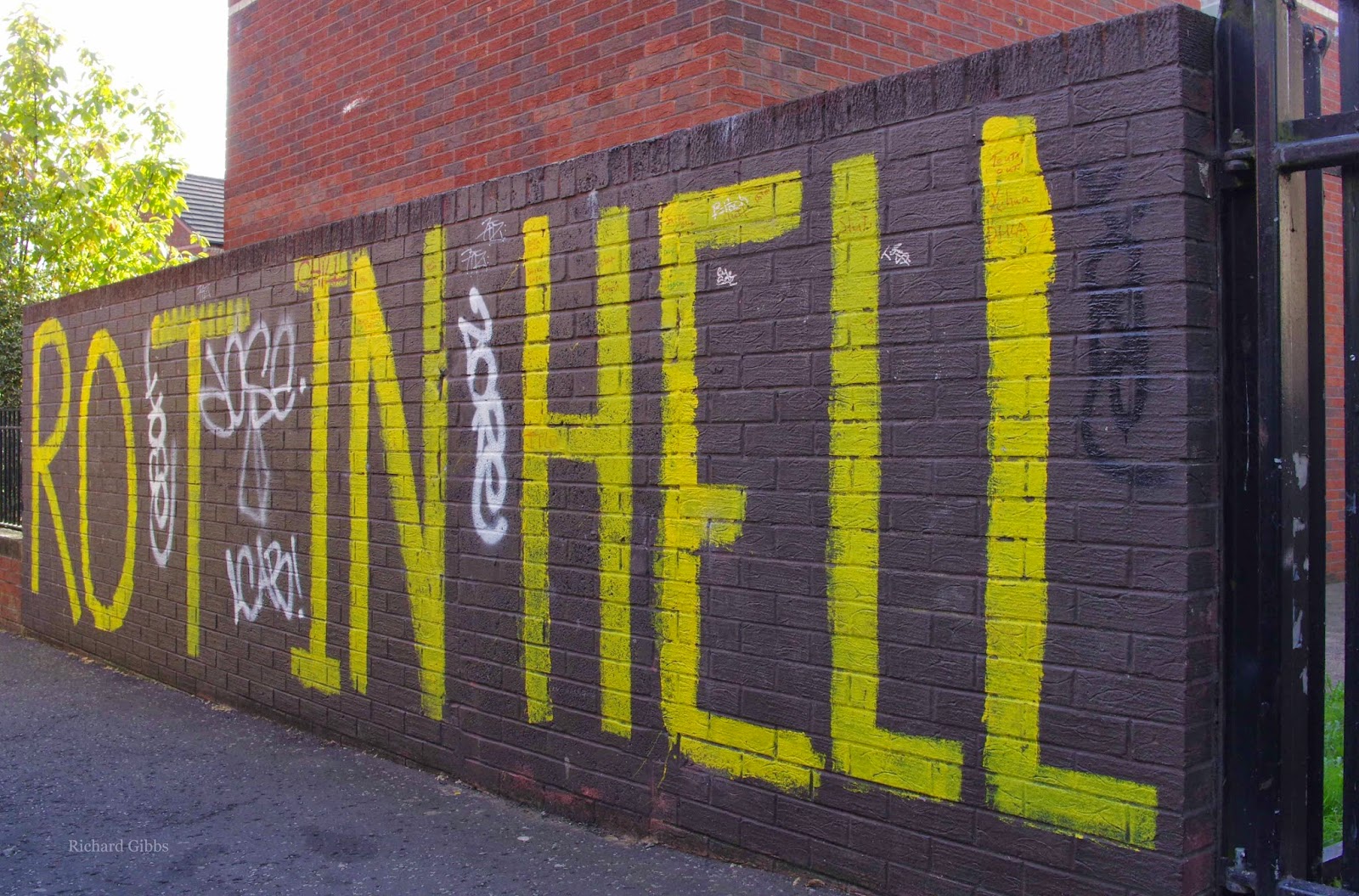 And on Divis Street there is an International Section for murals and graffiti, which includes a reference to Leonard Peltier, a Native American Activist, but which also carries, on sheets of paper above the paintings, the names of individuals imprisoned in High Security HMP Maghaberry which holds a number of dissident republicans as well as convicted terrorists.

Though it is 20 years since the IRA ceasefire and 16 since the Good Friday agreement, there is still unrest and division in Northern Ireland, and acts of violence still occur.  Casual tourists (such as me) may be unaware of underlying tensions, but memories will be long, and peace and justice are fragile concepts. 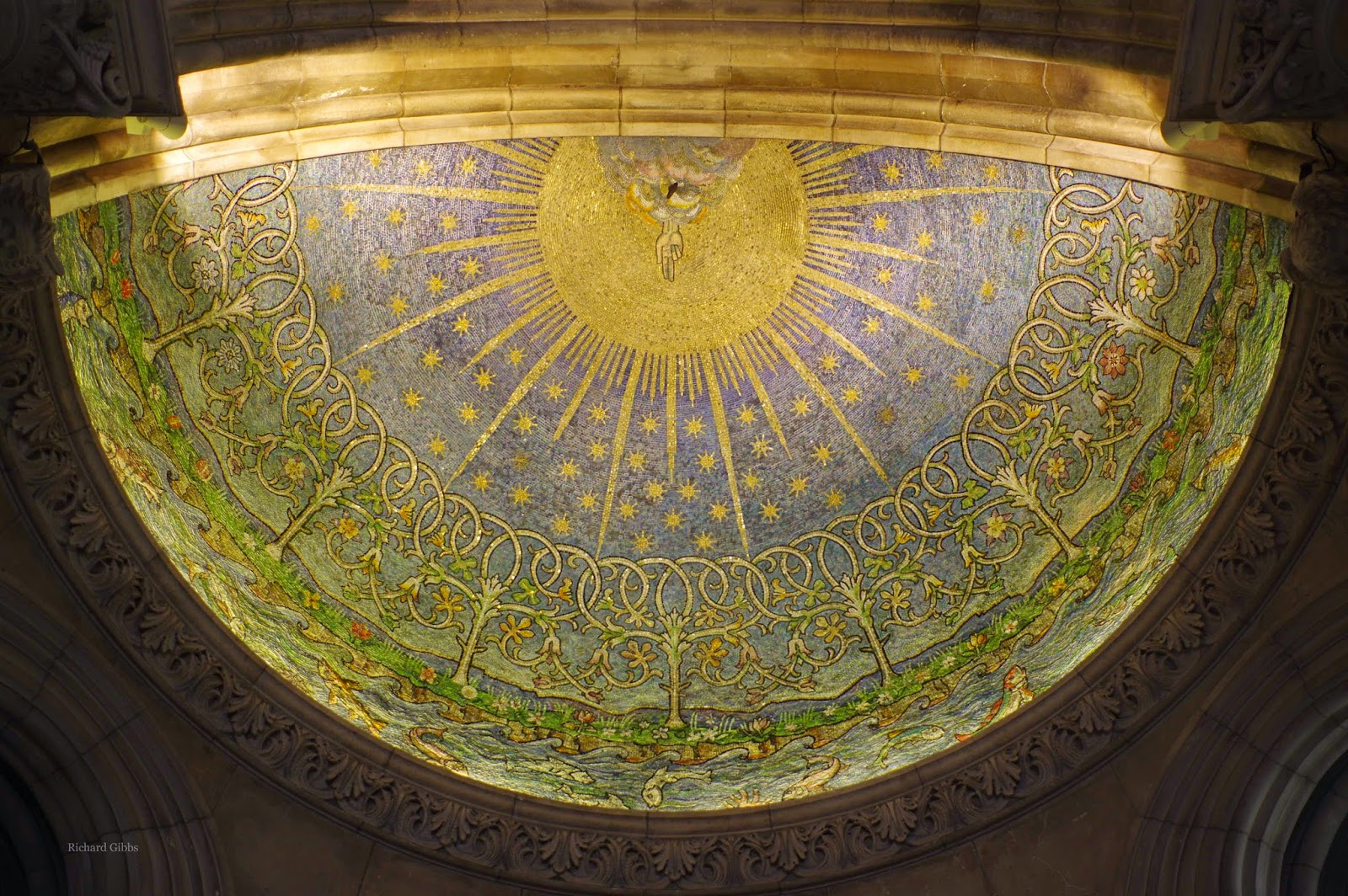 In St Anne's, I am accosted by a woman in a cape, who demands money.  A man practises the organ.  A tapestry in memory of the Titanic victims hangs on the wall.  Otherwise the Church of Ireland Cathedral is empty:

To the west of the city, in St Peter's Roman Catholic Cathedral a nun trims wicks on the altar. A man with a walking frame sits, perhaps in prayer. Otherwise it is empty.


Just by Queen's University, in the Botanical gardens, the Palm House is closed: 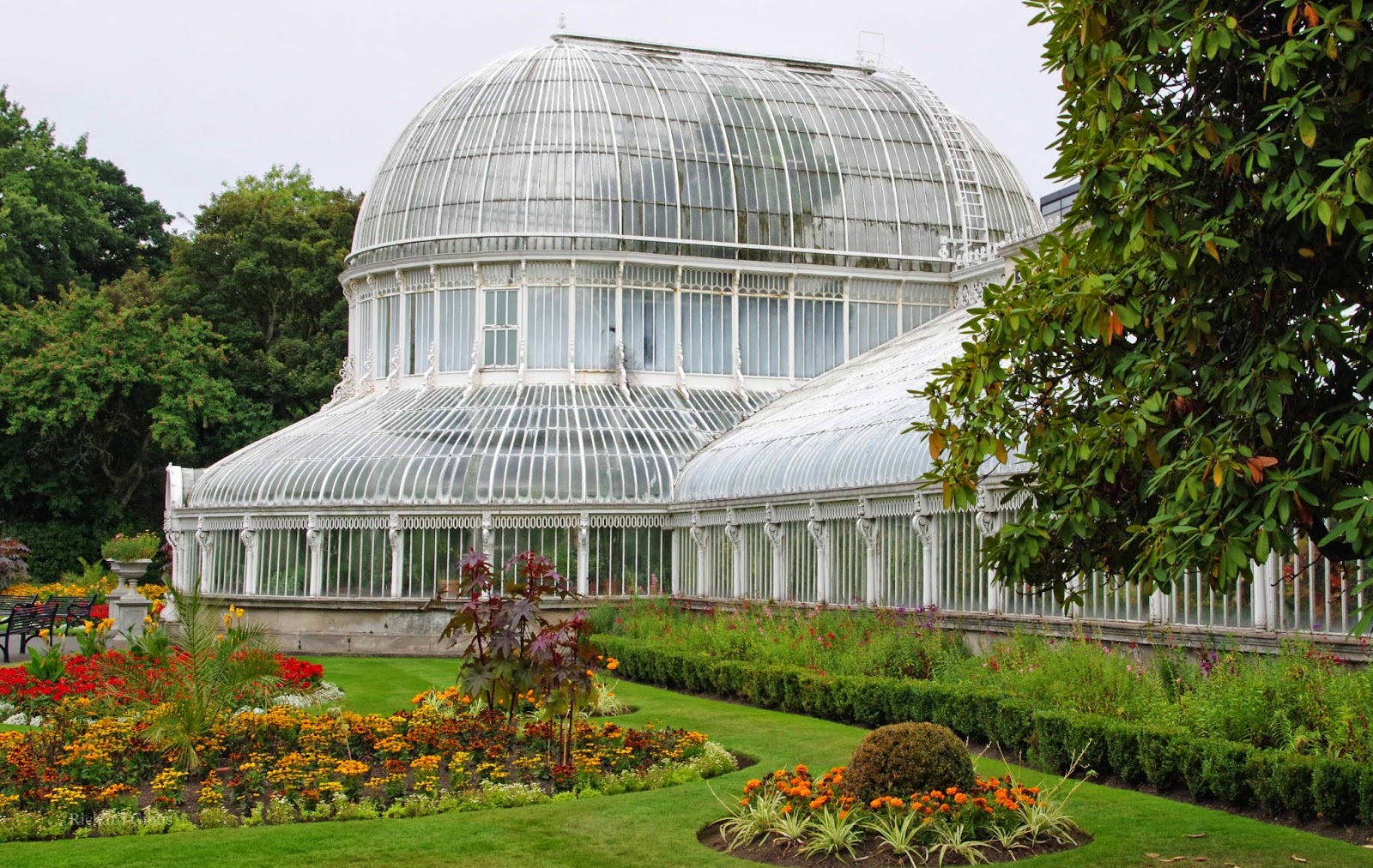 On Botanic Avenue an empty bottle of champagne stands by an empty building. 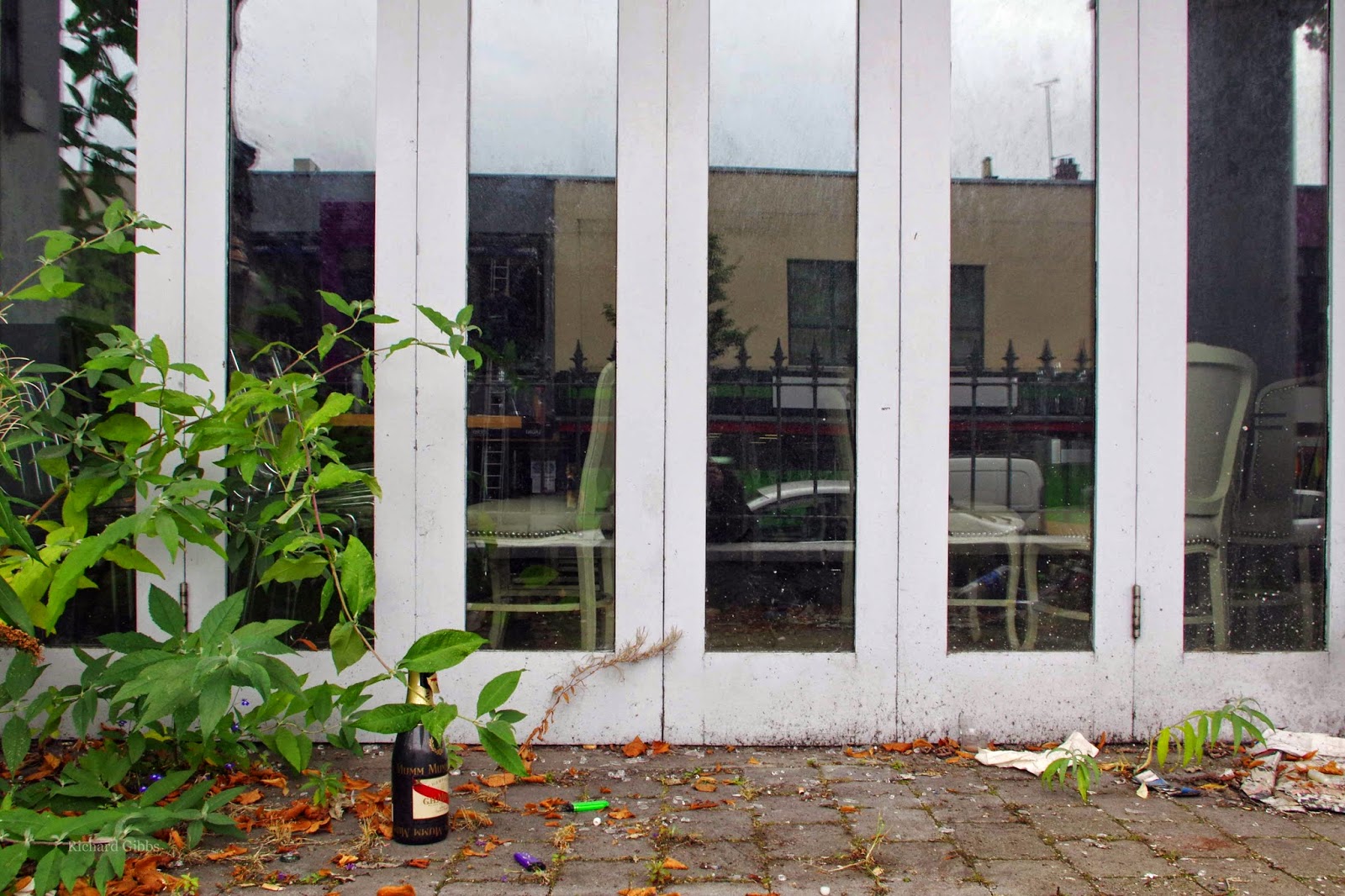 In the John Hewitt, owned by the Belfast Unemployed Resource Centre and named after the late poet, socialist and Freeman of the City, I face Farmageddon.... 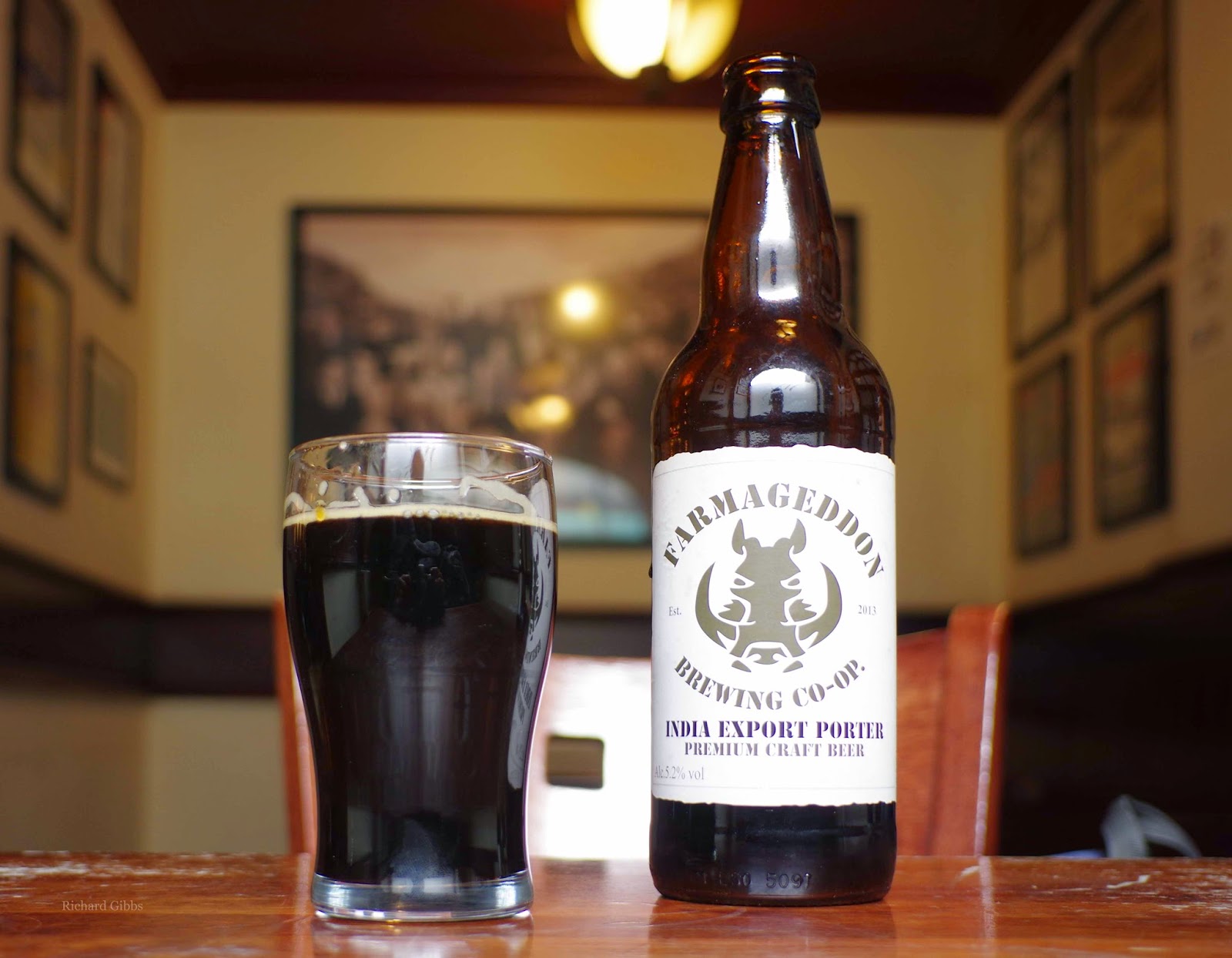 By the River Lagan, a giant fish breathes its last....


Near the City Hall, the entrance to the Girls Brigade is through the Boys Brigade, next door: 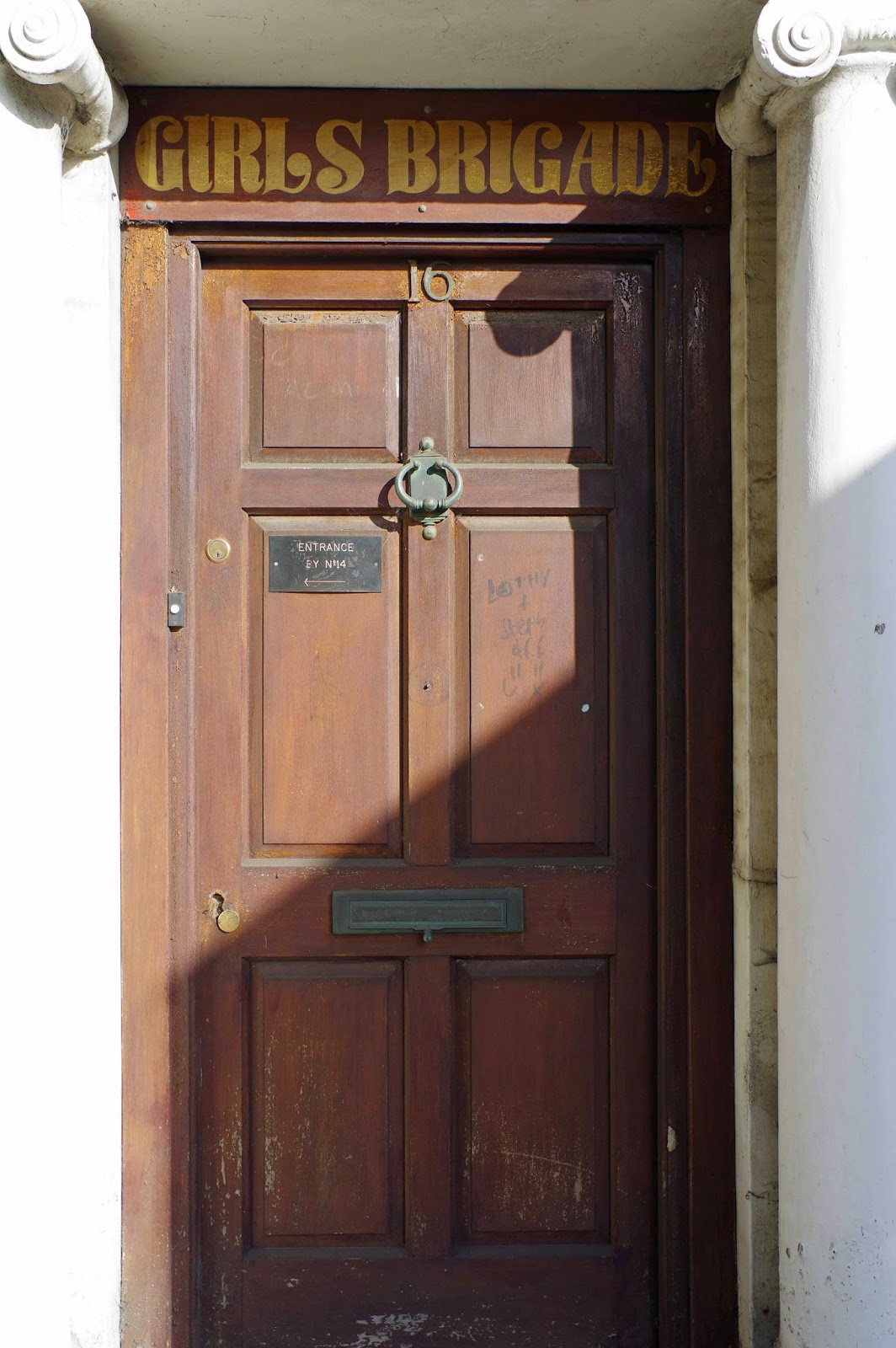 Across the road from the Royal Courts of Justice a bronze shepherd drives his bronze sheep towards me, 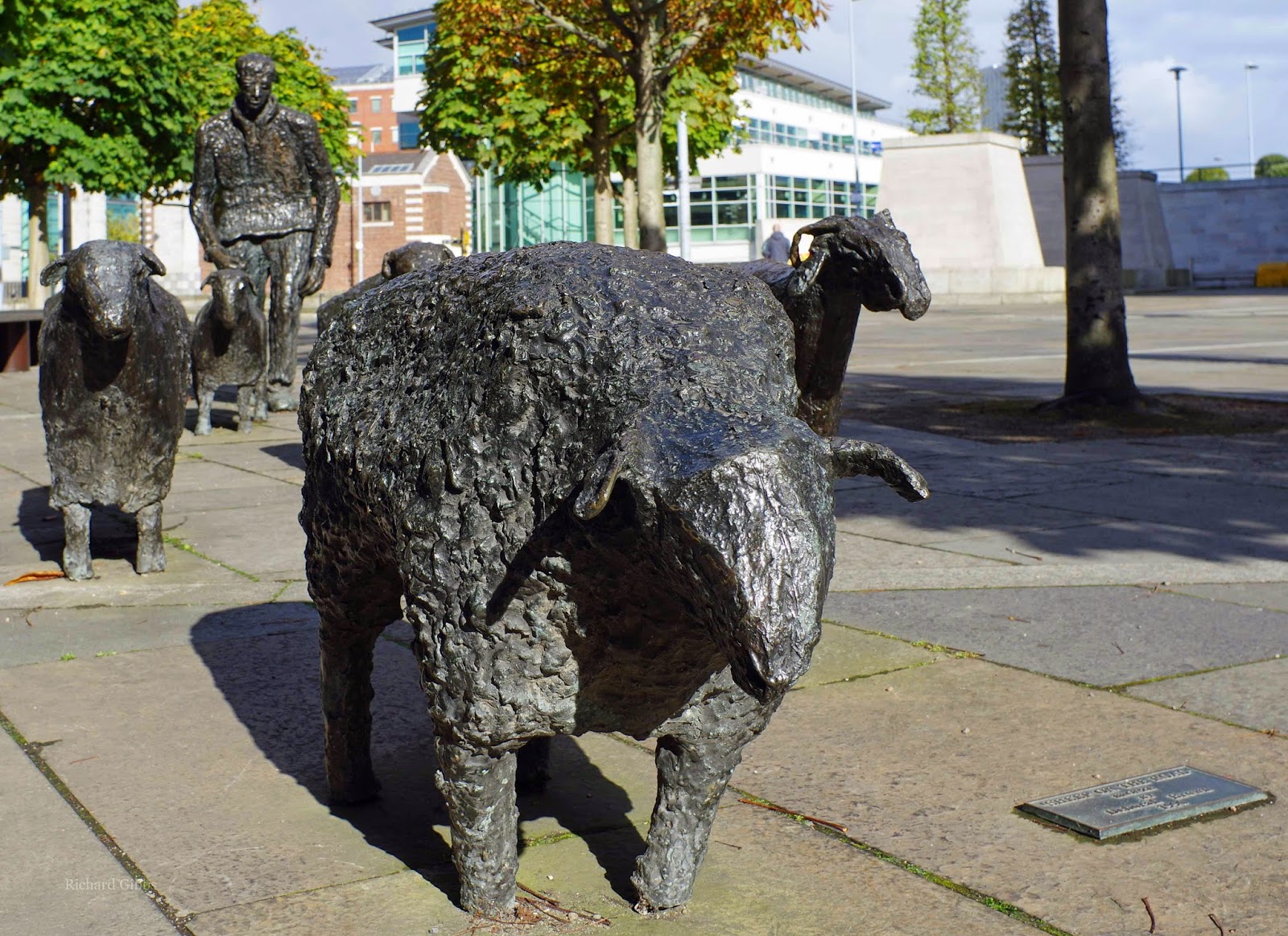 And outside Belfast Waterfront a bronze cooper rests on his barrels....

As East Belfast boy Van Morrison sings, Belfast is stranded between that ol' devil and the deep blue sea and nobody's gonna tell [me] what time it is.  Past and future collide like steel and ice but there ain't nowhere else to be.  Razor wire and oil rig eye each other up in passive distrust. 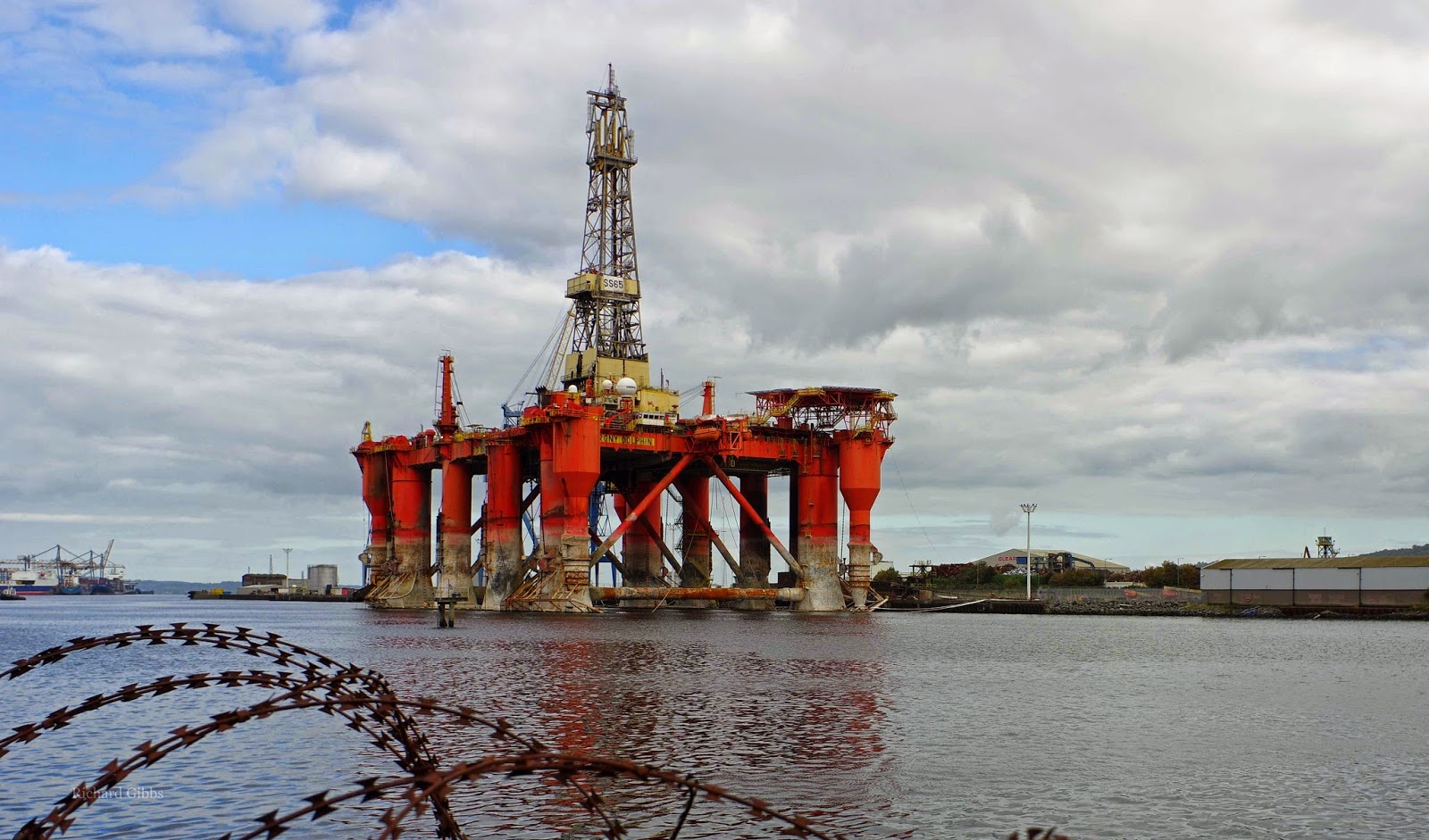 On the street, the city fathers stand in confident triangles:

While their forefathers pose by the caisson gate, the giant propellers still above their heads.


She was both fair and handsome


And her hair, hung down from her shoulders
Held up with a black velvet band

I used to sing that song, emulating my hero, Luke Kelly.  I love it.  It's a great song, a great story, and one that goes on and on, though the singers may have left the building.  The ambiguity of the Black Velvet Band (not so unlike a pint of porter) and the mysterious starry twinkle of diamond eyes, sparkling promises like the White Star Line but really hard and sharp, like ice, resonate on the docksides and in the quiet streets of Belfast today.

Nothing is what it seems.  But, as Humph might have said, as the RMS Titanic of Time and the Ironic Iceberg of Destiny converge in the Ocean of Promises, I notice that it's the end of the show......


The watchman, he lay dreaming