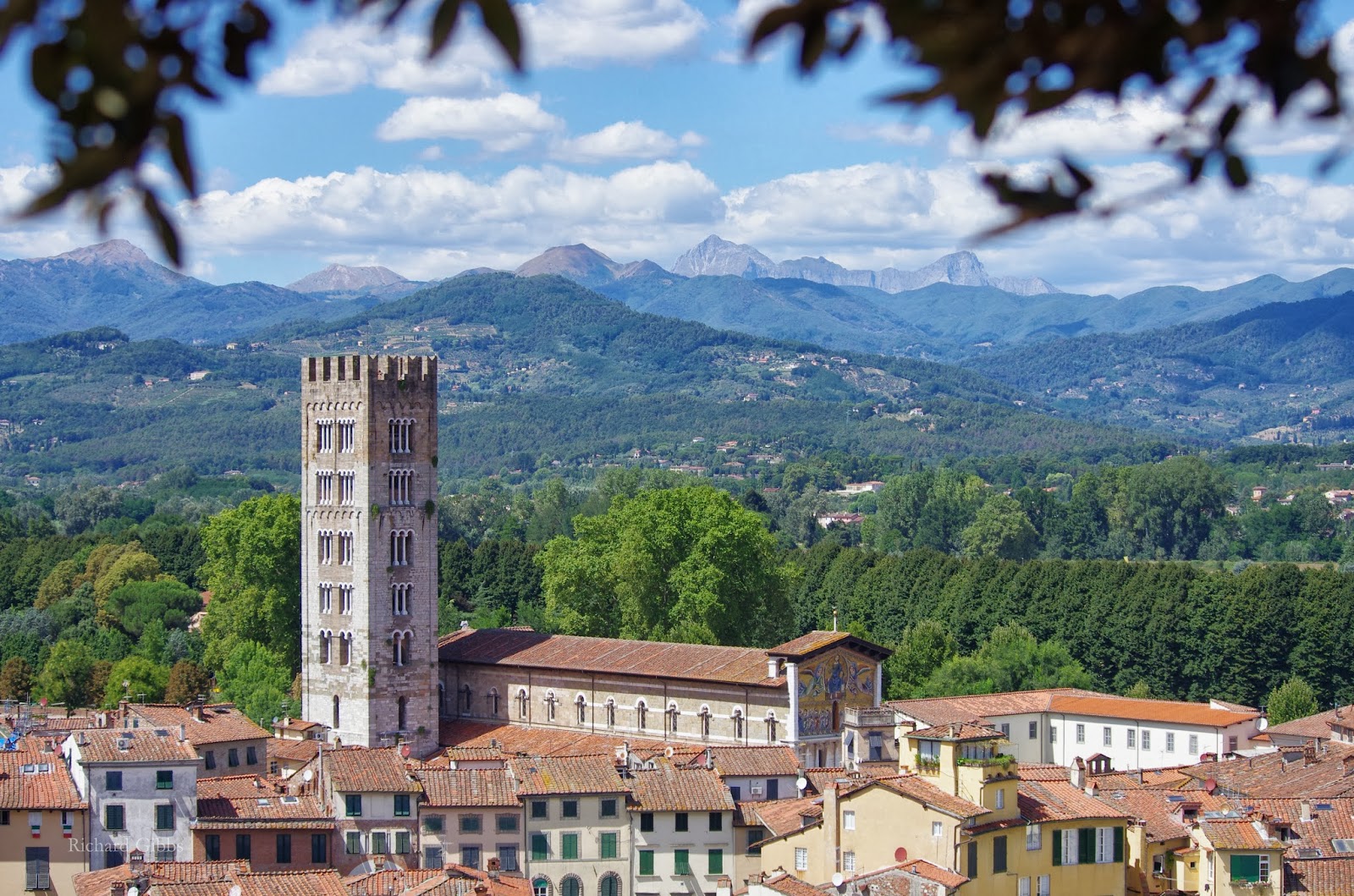 In Puccini's opera La Boheme, Rodolfo, a poet living in a freezing garret in the Latin Quarter of Paris, meets Mimi, an embroideress who lives in the same building.  He is struck by her pale beauty, and having held her frozen hand for a moment, sings:


(Oh! sweet young girl! Oh, sweetest vision,
With moonlight bathing your pretty face!
The dream that I see in you is the dream I'll always dream!) 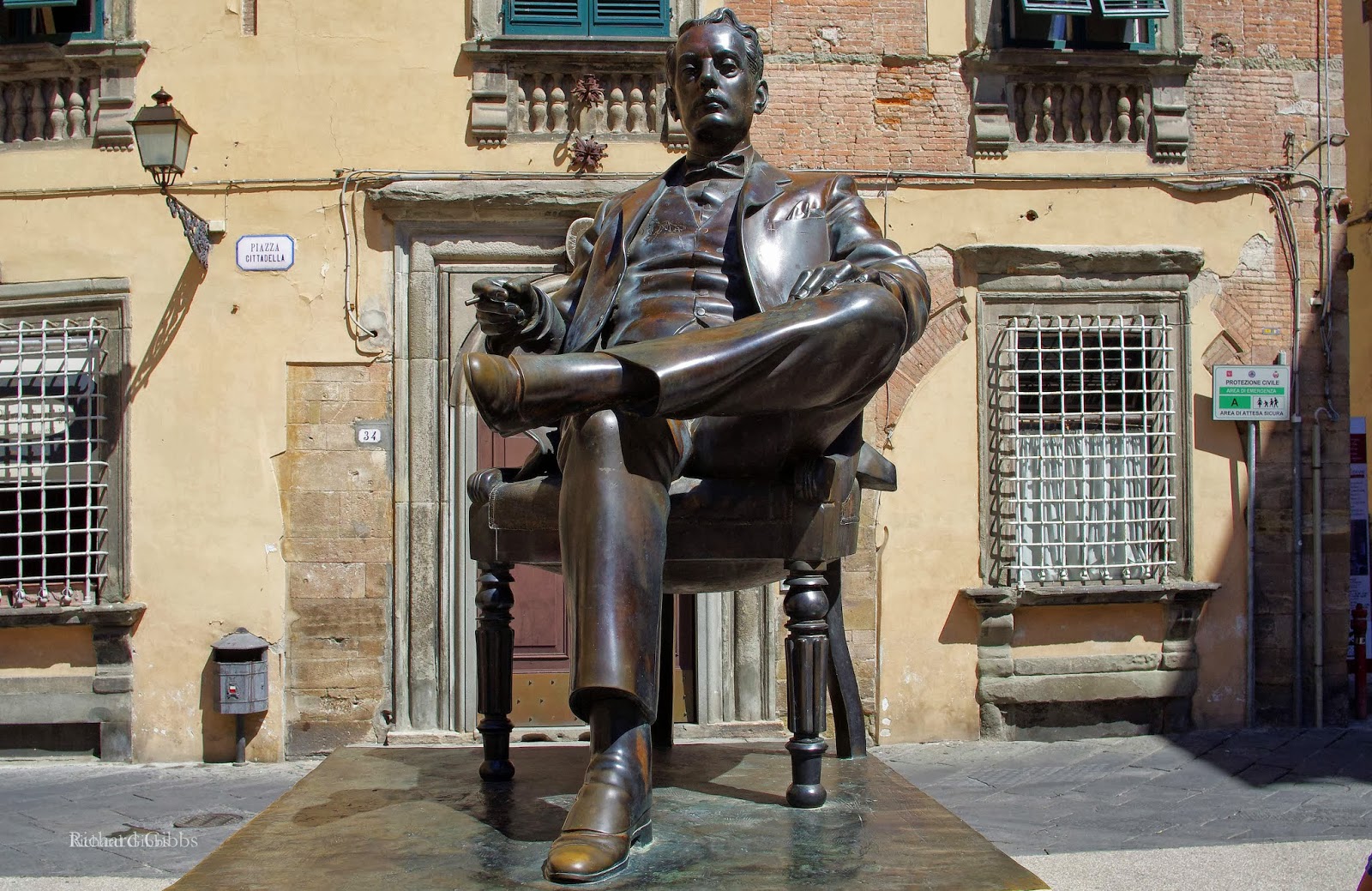 Puccini, who was born in Lucca in 1858, lived a bohemian life himself as a student in Milan, and was something of a womaniser, so La Boheme reflects some of his own experience.  But in a different way, the city of Lucca herself is a sweet girl. 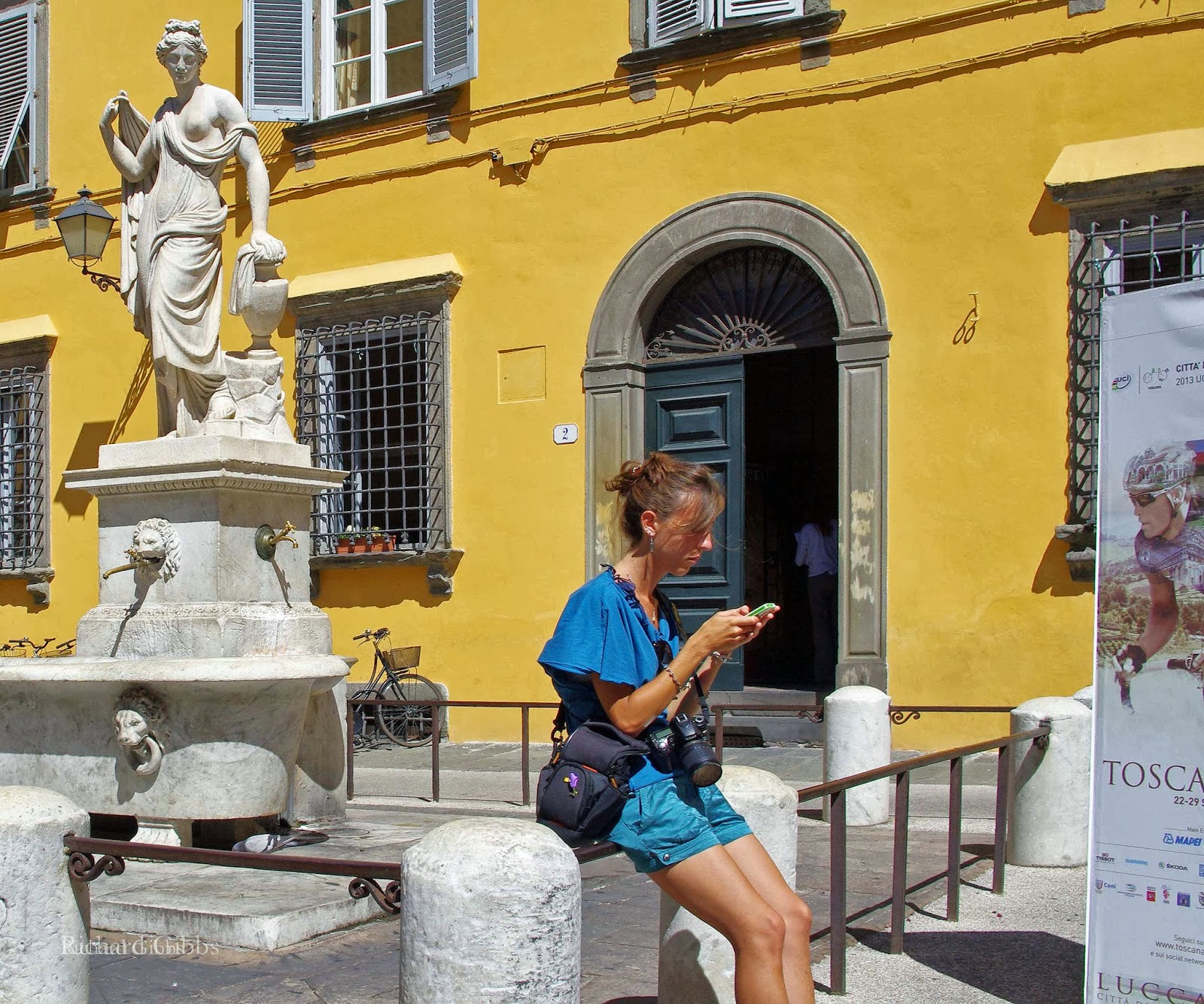 She is not a grand city.  She has a population of approximately 90,000, but not all of these live within the 16th/17th century walls which surround the old town in an undamaged tree-shaded ring of 4.2 kilometres.  These walls, pierced by seven gates of different ages, provide a circuit to walk, jog or cycle, places to sit and rest, to chat, and the views over the city and out to the mountains beyond.  Nowhere in the world has quite such a facility and perhaps this accounts in part for the seeming well-being of the inhabitants. 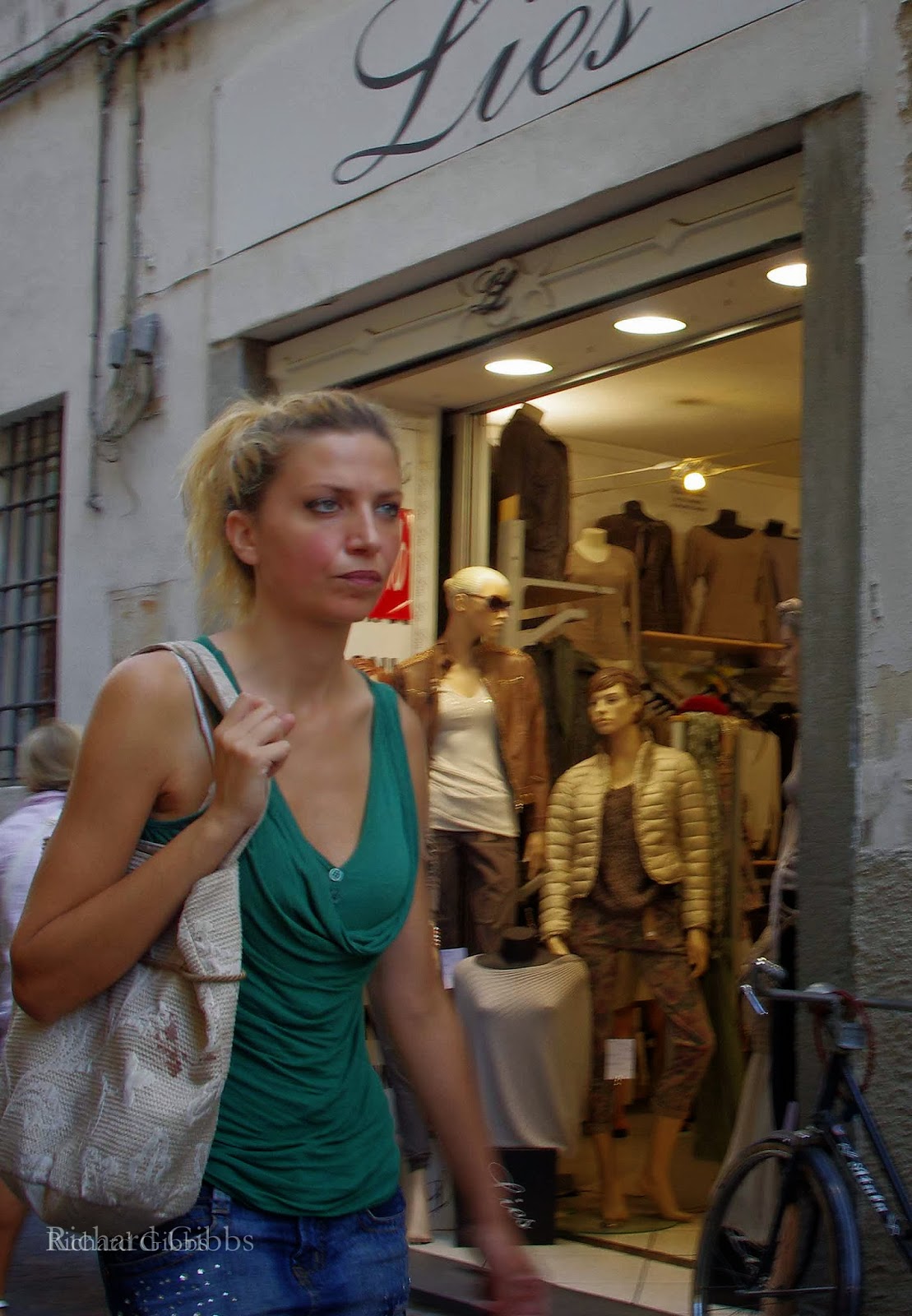 Within these walls crowd churches, palaces, shops and streets, all on the flat at 19 metres above sea level.  With very little traffic allowed, the bicycle is a favourite means of transport, and for visitors there are hire shops, and hotels provide bikes free for their guests. 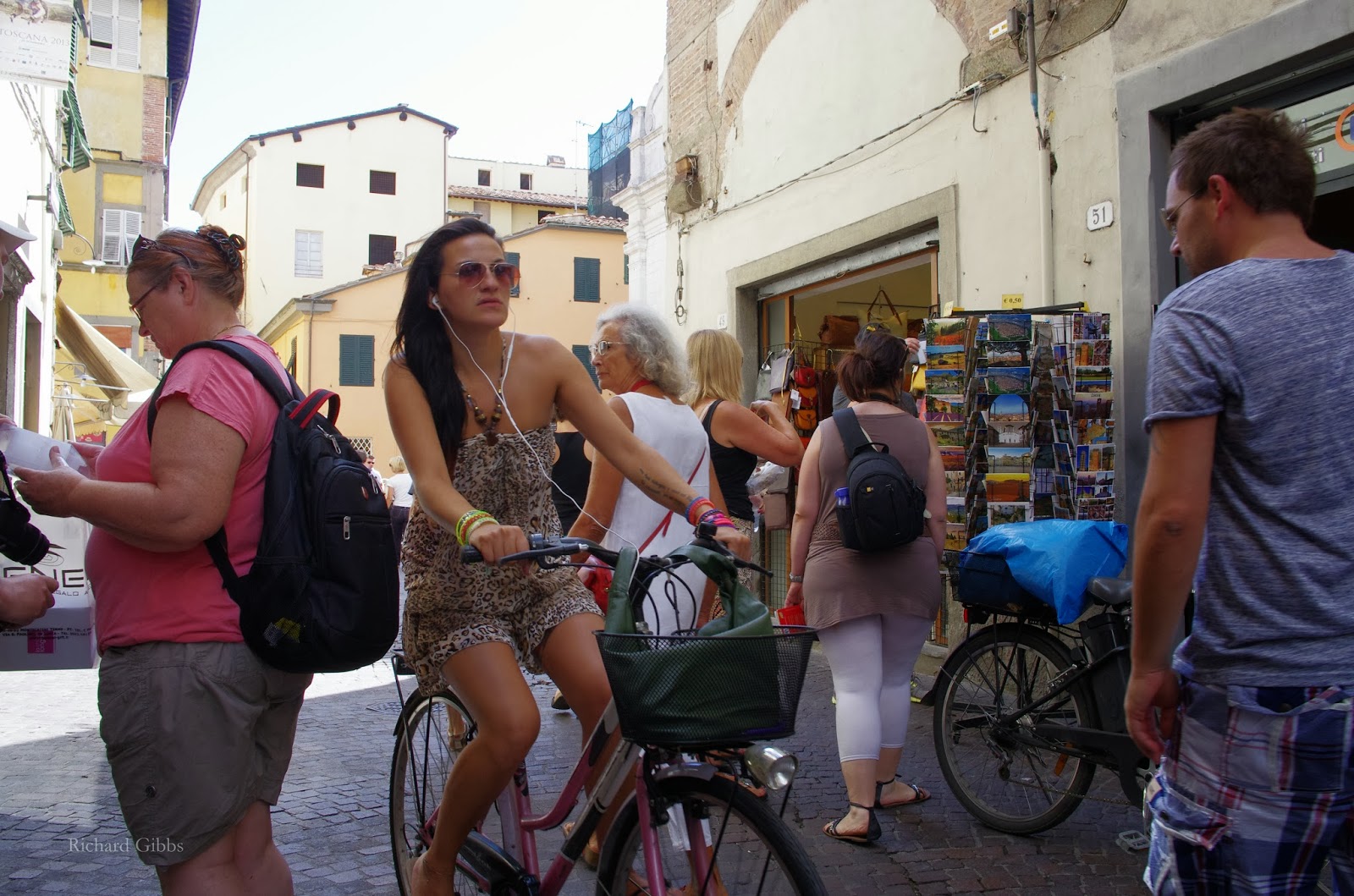 The streets sing with people during the day, both on wheels and on feet, and these ravines offer respite from the Tuscan sun.  I can imagine Puccini, who only lived fifteen kilometres away at Torre del Lago at the height of his fame, puffing on a Toscano cigar, strolling about the town, dropping into a café for a glass of wine, casting an approving eye across the passing ladies, and humming O soave fanciulla! to himself..... 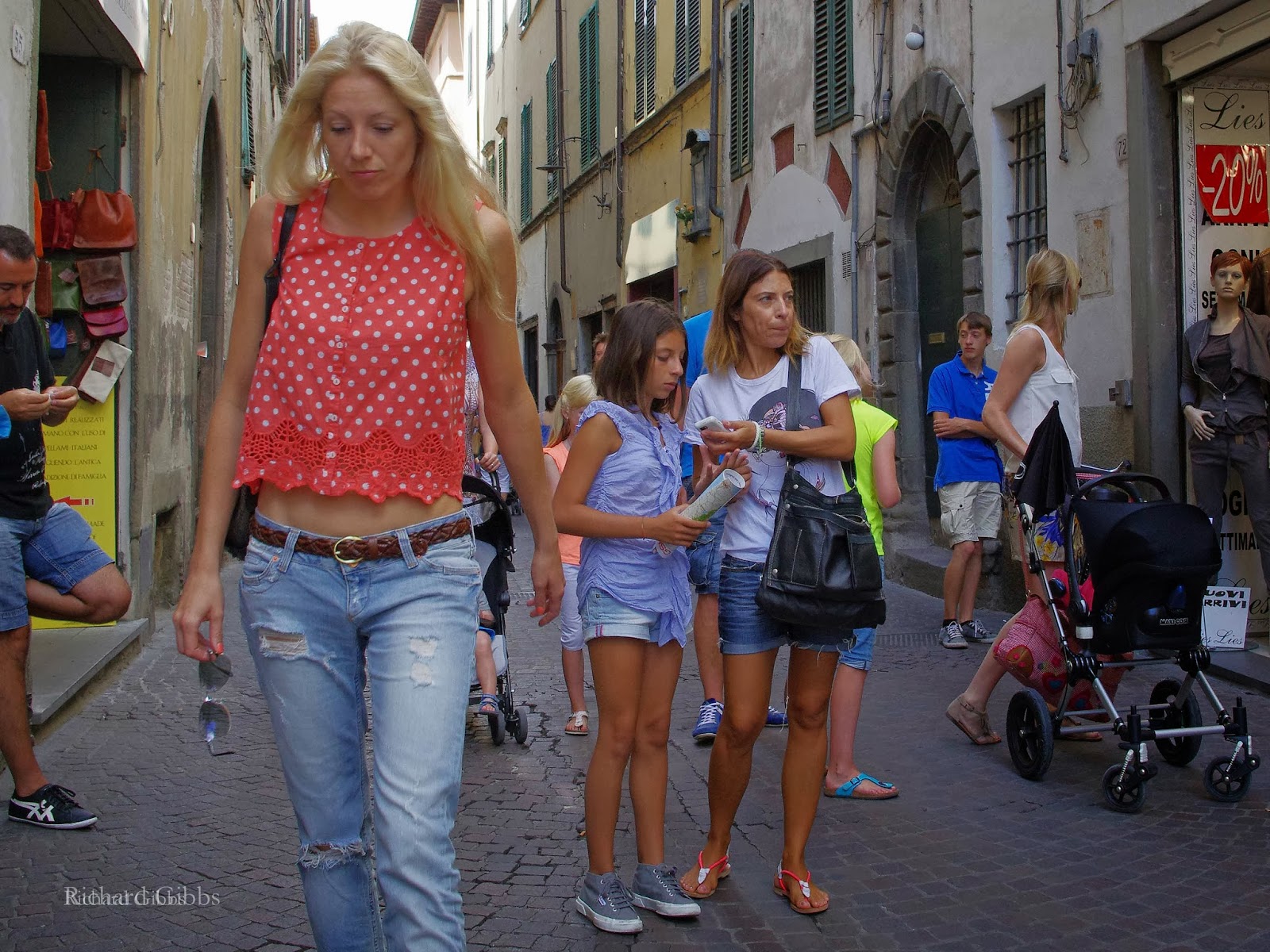 And not only those in the bloom of youth would have caught his attention.  Lucca is not young herself, and her people, and her visitors, all pick up a lightness as they relax in la dolce vita that imbues this place. 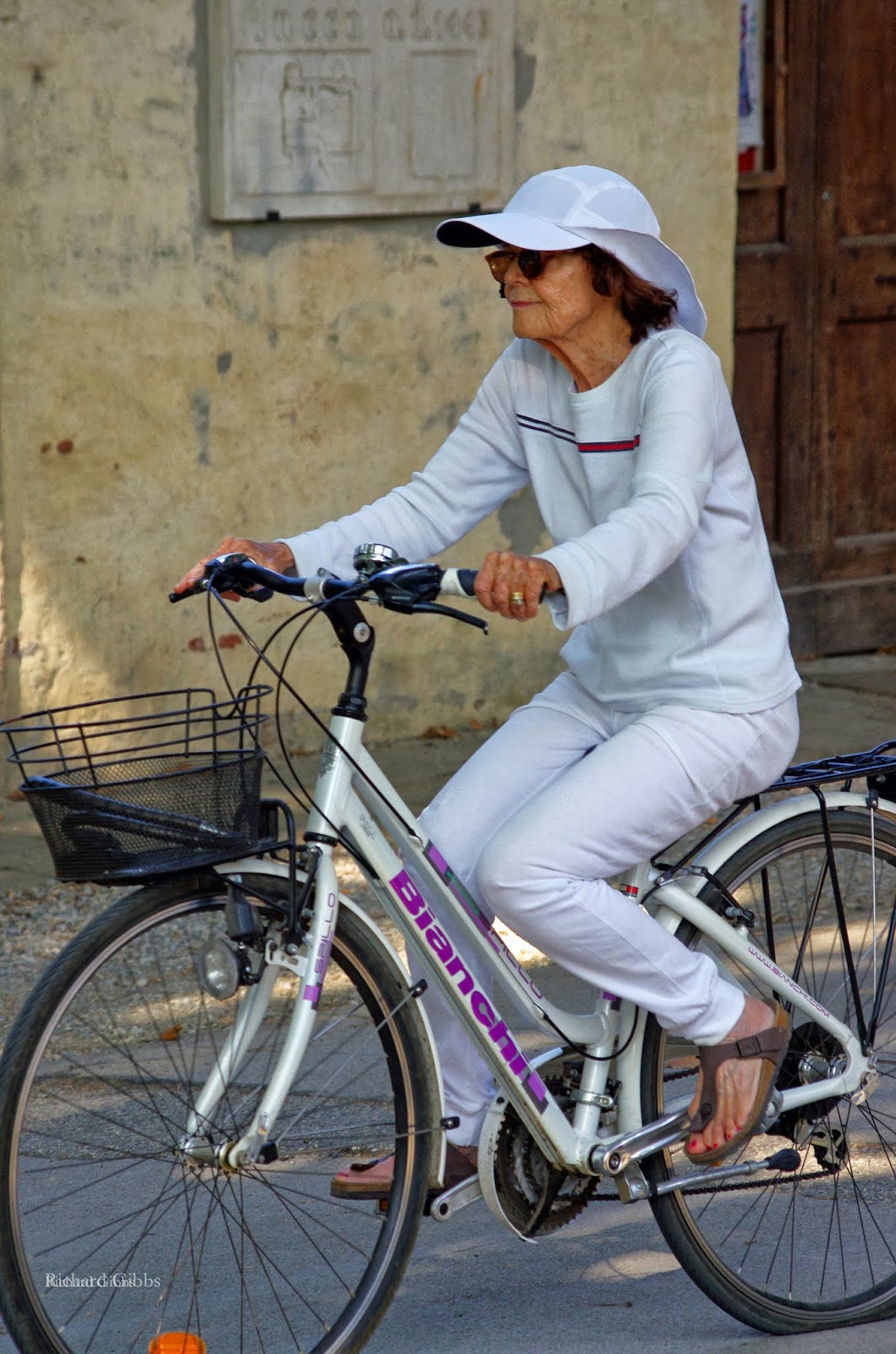 Even when carrying a heavy gold bag filled with goodies from the market!

Or resting in the peace and shade of the Botanical Gardens. 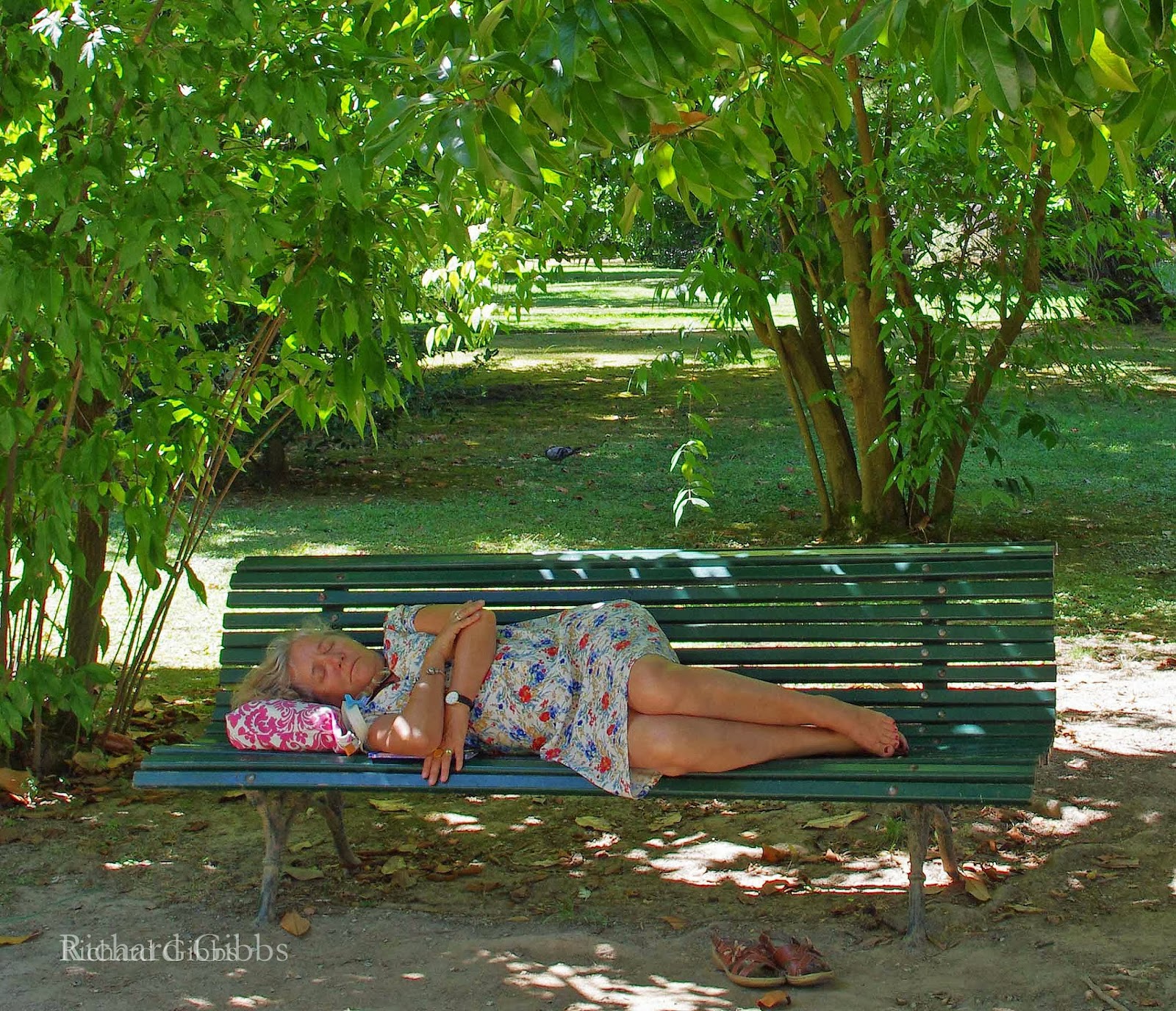 This is a graceful town.  Tiny touches like these pots of basil on a window-sill (below) catch the Keatsian romance of the place.  Elegant shuttered windows embellish the buildings, and you can see how Puccini might have thought the whole town earned the adjective soave, with its meaning of gentleness, or delicacy, as well as with its connotations of the fragrant wine of the north. 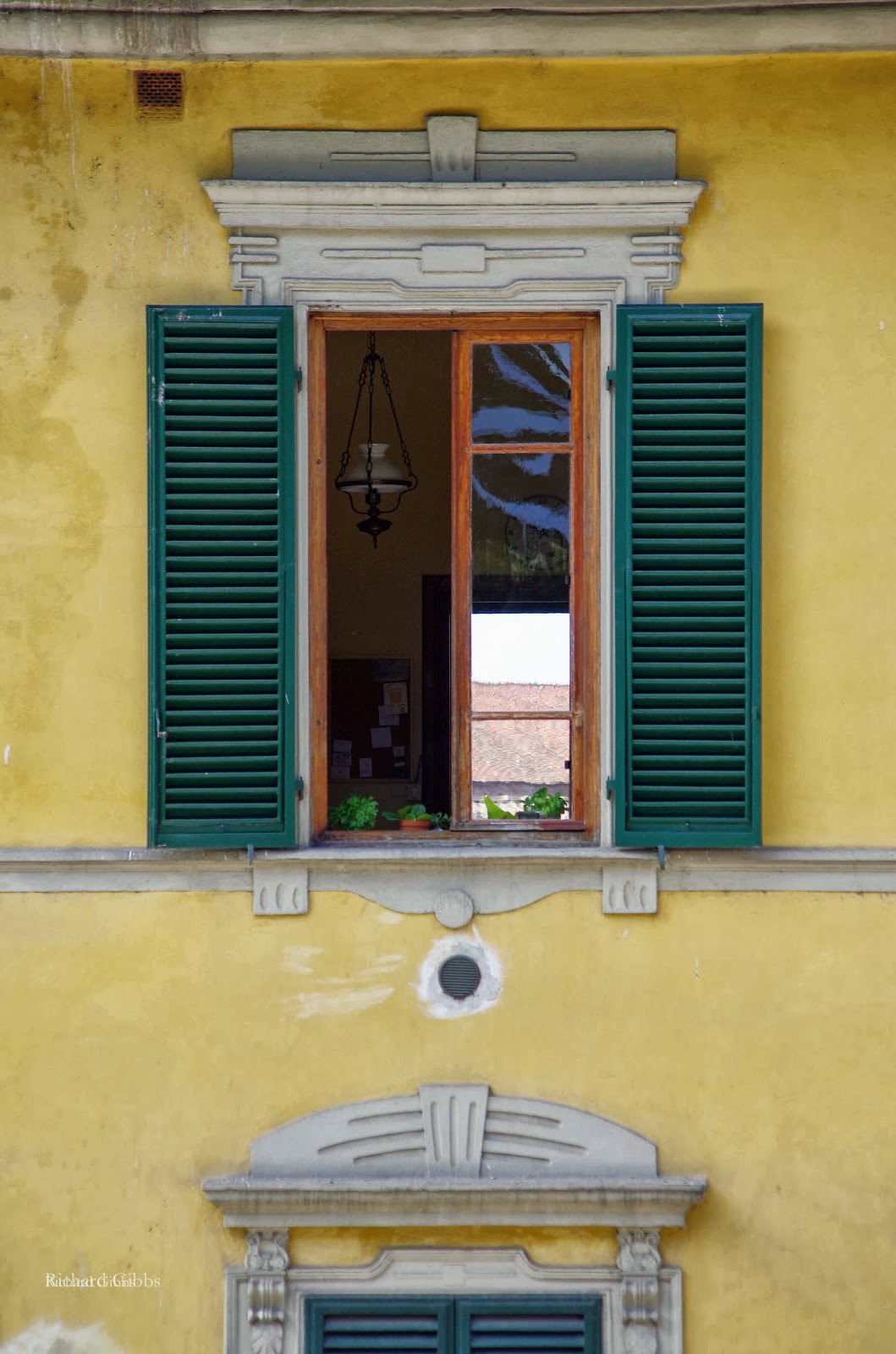 The city is set amongst gentle hills, with a backdrop of rugged mountains.  The defences were planted with plane trees and chestnuts, holm oaks, beech and pine to hold the earthworks together within the red brick walls.  Even on top of the Giunigi tower, which was built in the fourteenth century, there are oak trees - lecce, or quercus ilex - planted by the family to symbolise regeneration. 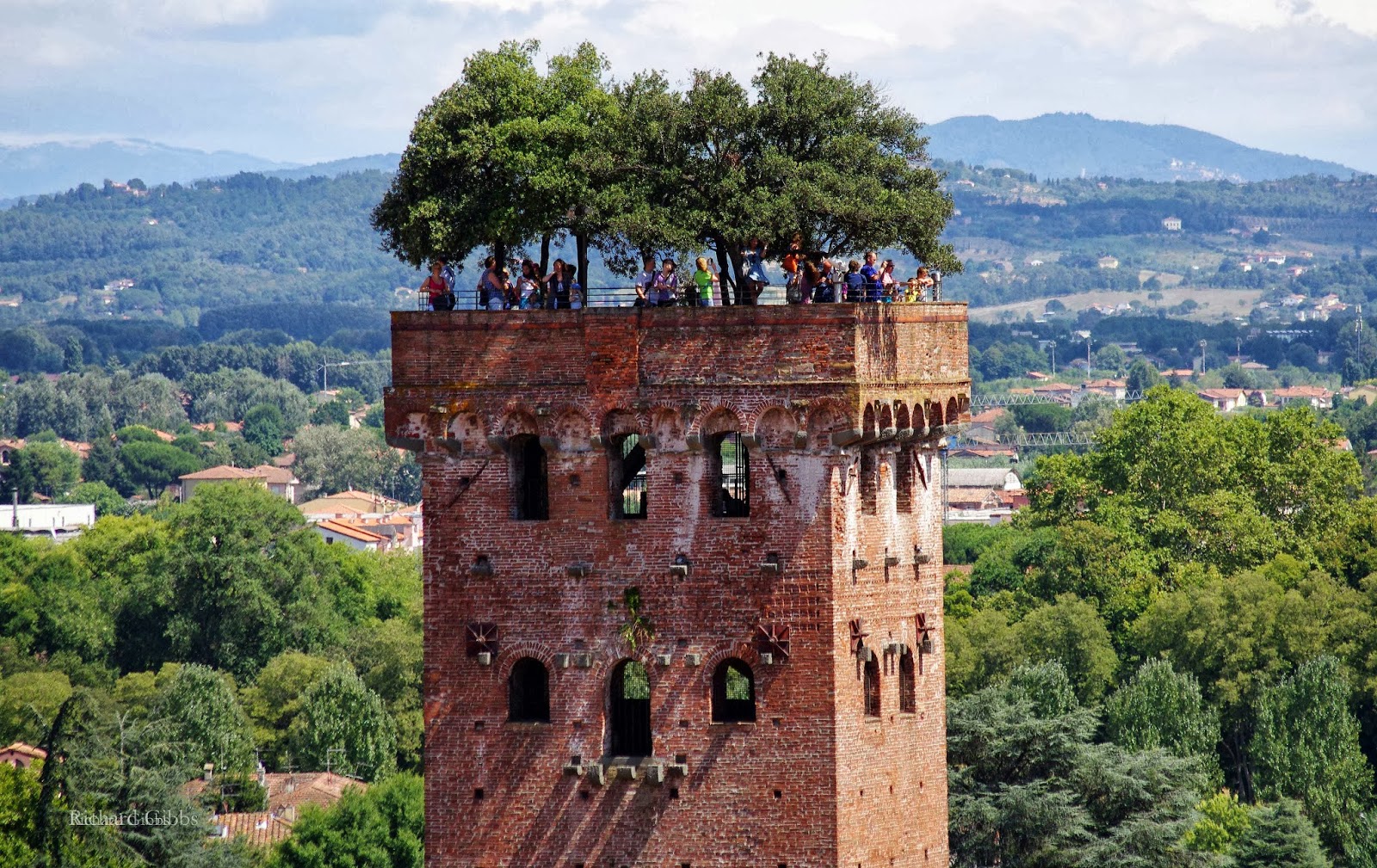 Wherever you look, the red brick and marble, the green and blue shades of trees and distance, the scene is gentle. 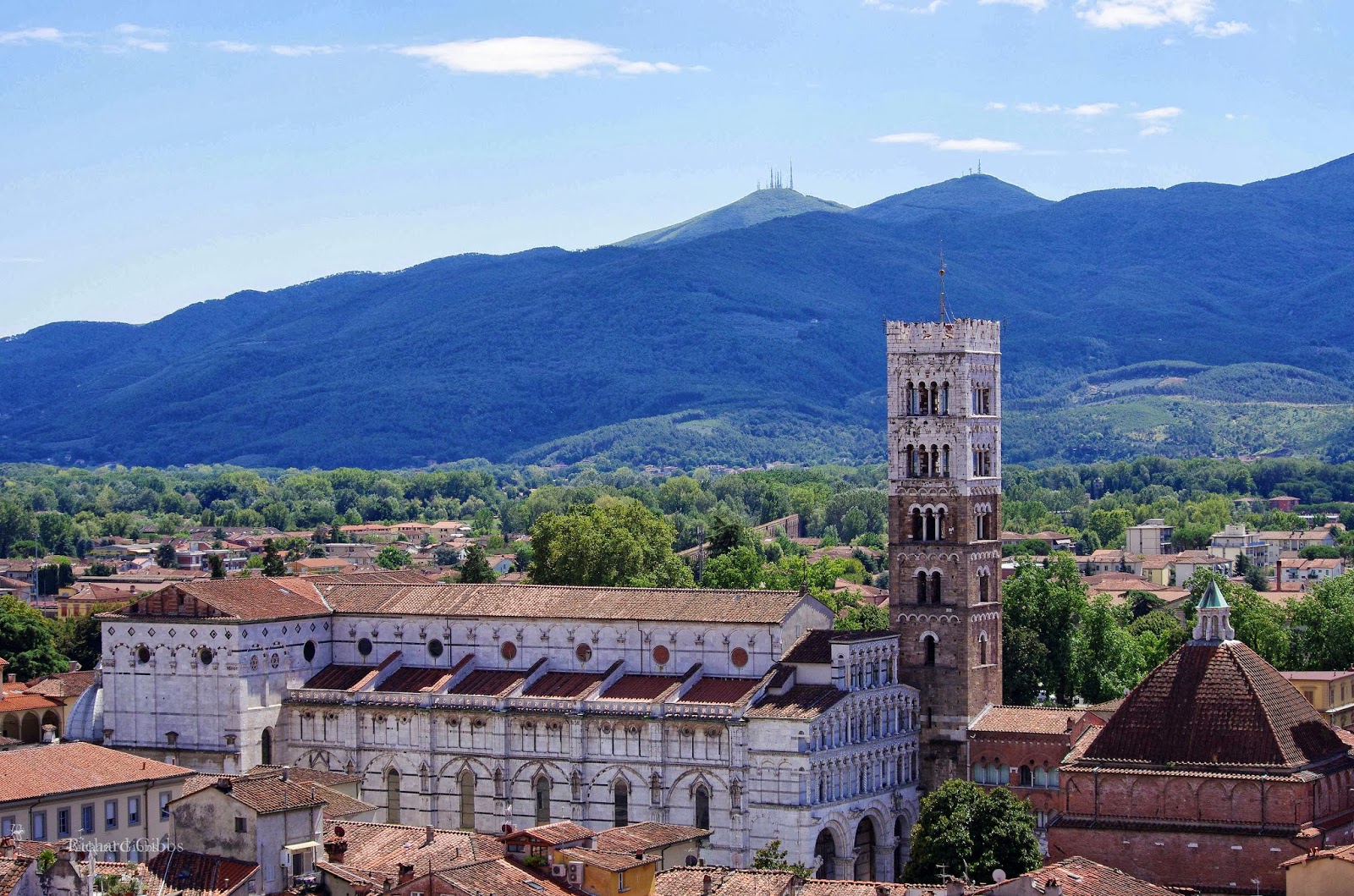 Whether St Martin's Cathedral dominates the view (above) or you stand before the church of San Michele in Foro by day: 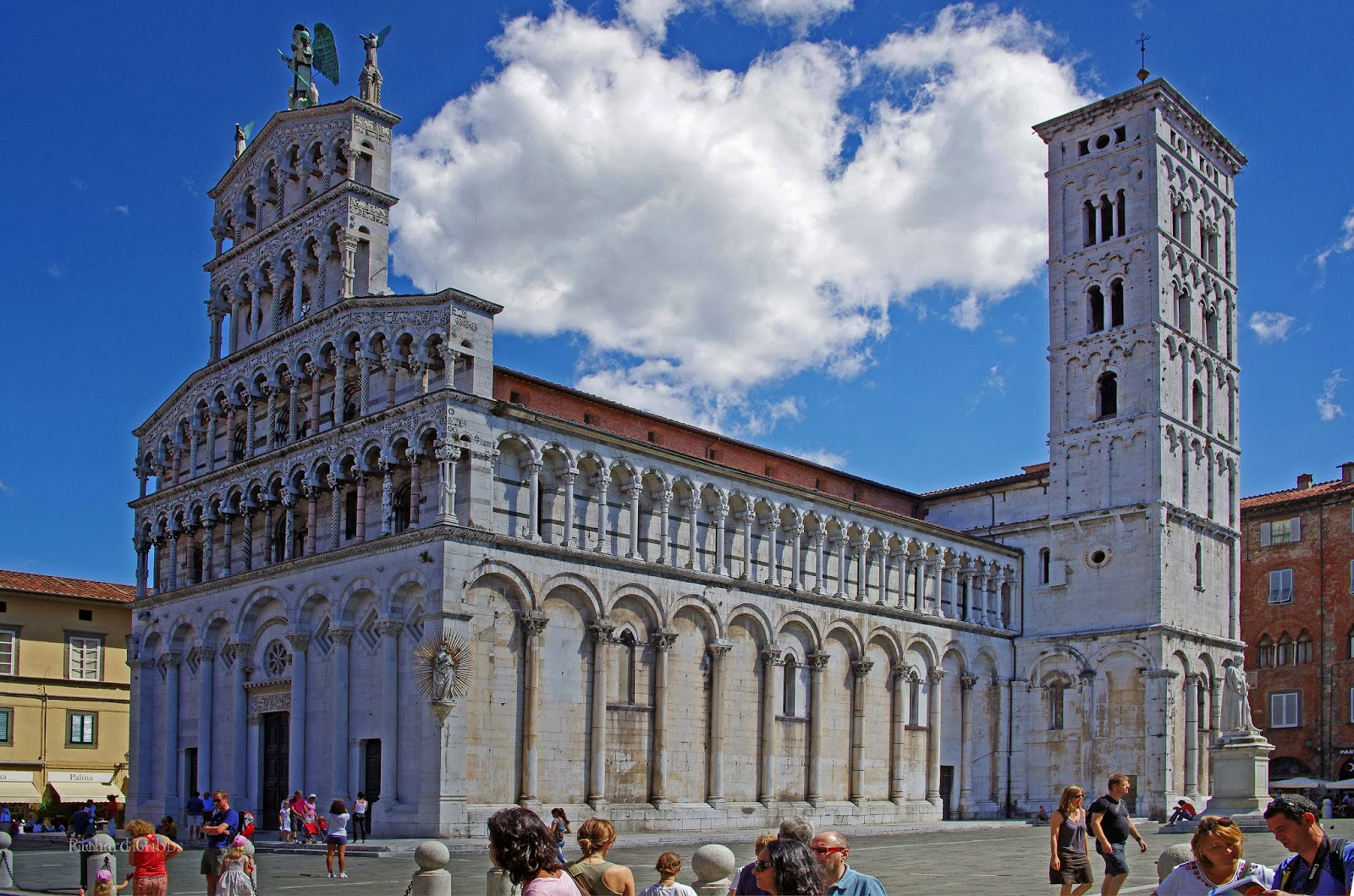 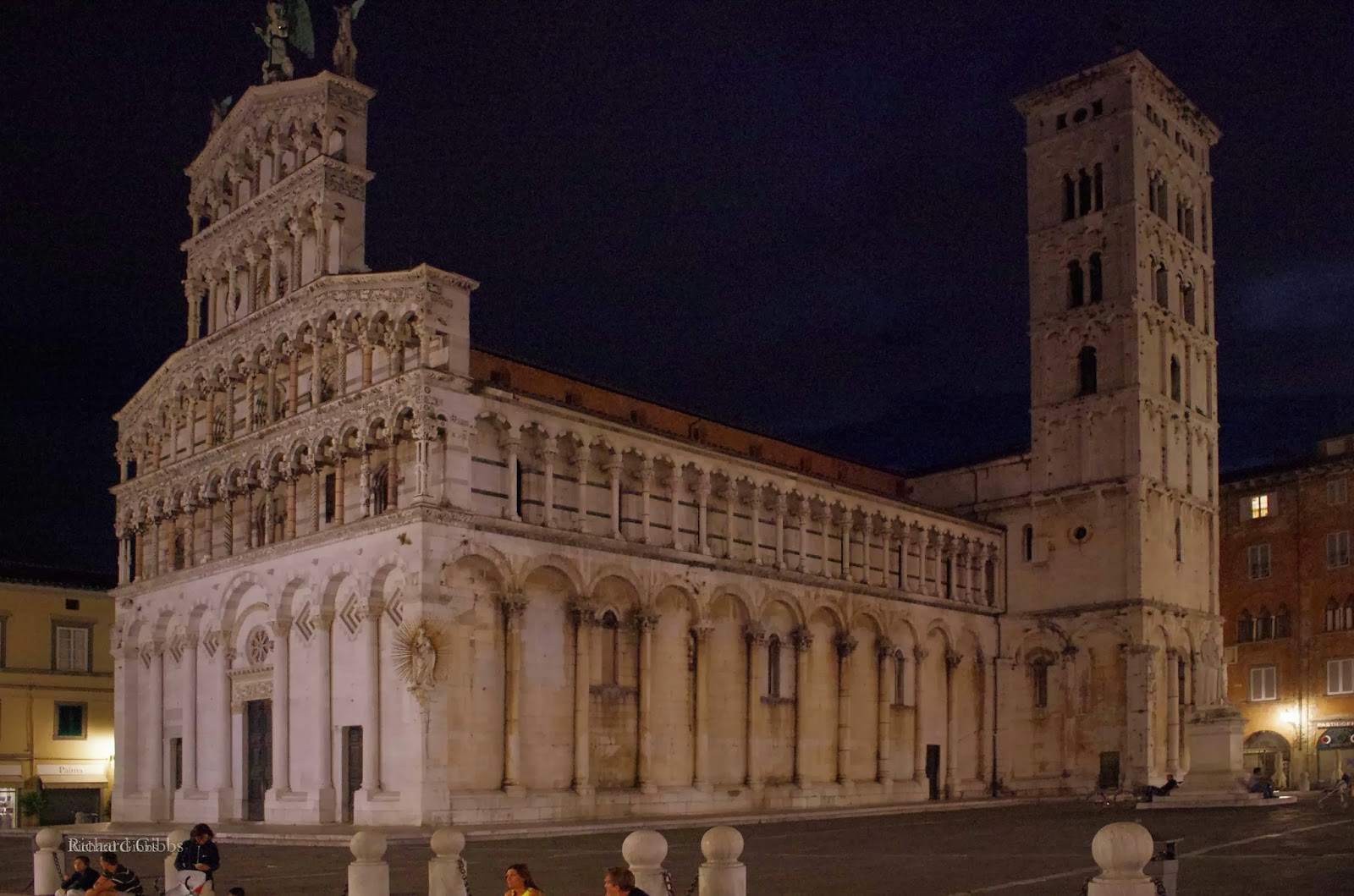 Or you look down on the buildings which have grown up in the shape of the Roman amphitheatre:

Or you stand within it:

Or you admire the raked rooftops and slender streets.....  Wherever you look, Lucca is indeed una soave fanciulla! 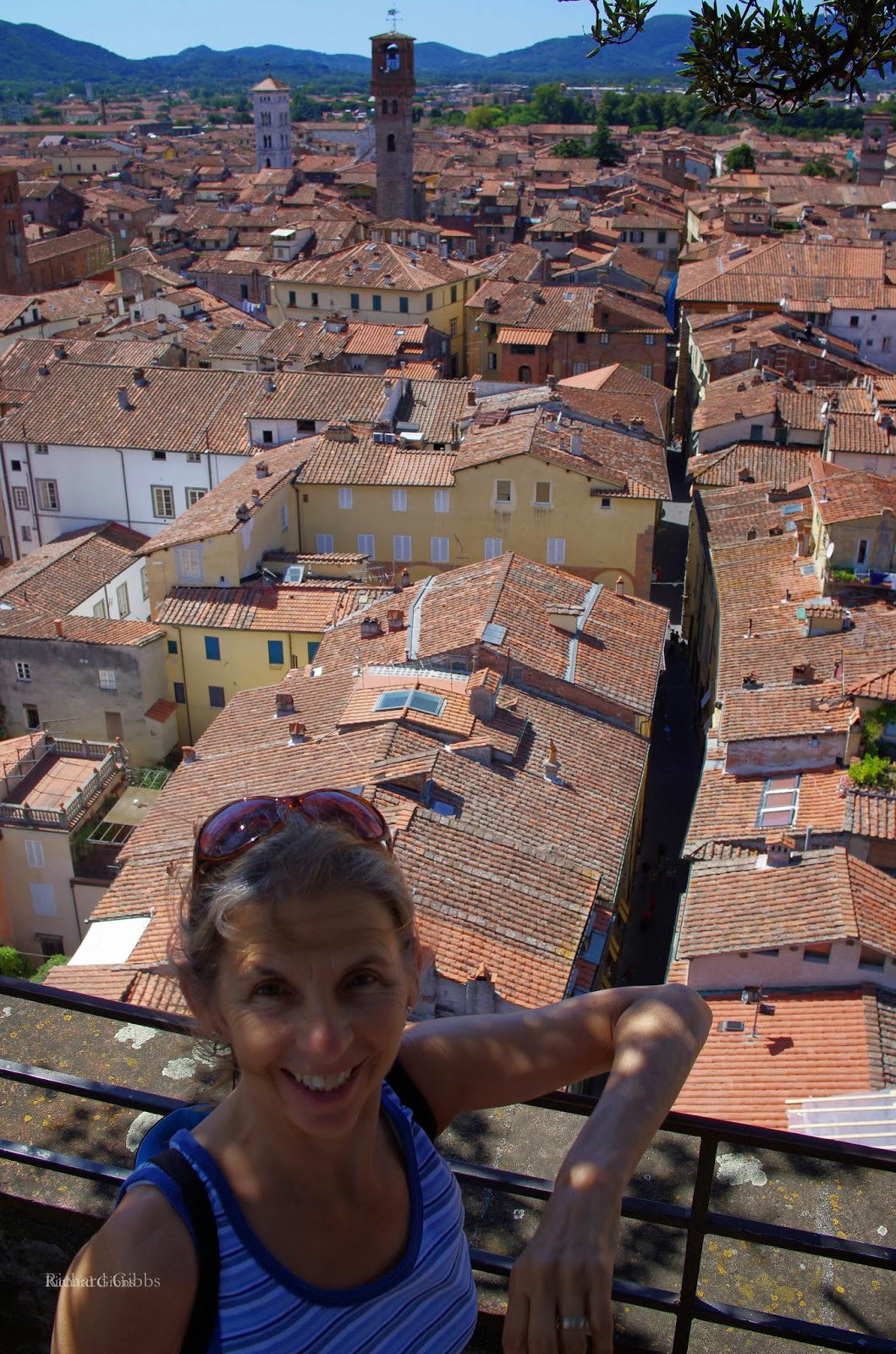 As an aside, Lucca has changed hands in terms of its rulers many times, from the Etruscans to Napoleon for example, and the delights of the area were particularly appreciated by the French, when Napoleon's sister, Elisa Baciocchi, found that the  nearby thermal baths, at Bagni di Lucca, some 20 kilometres from the city, suited her and her court.  However, after the 1814 Congress of Vienna, the Duchy of Lucca became the property of the Bourbon family, and for a while was favoured by the English. 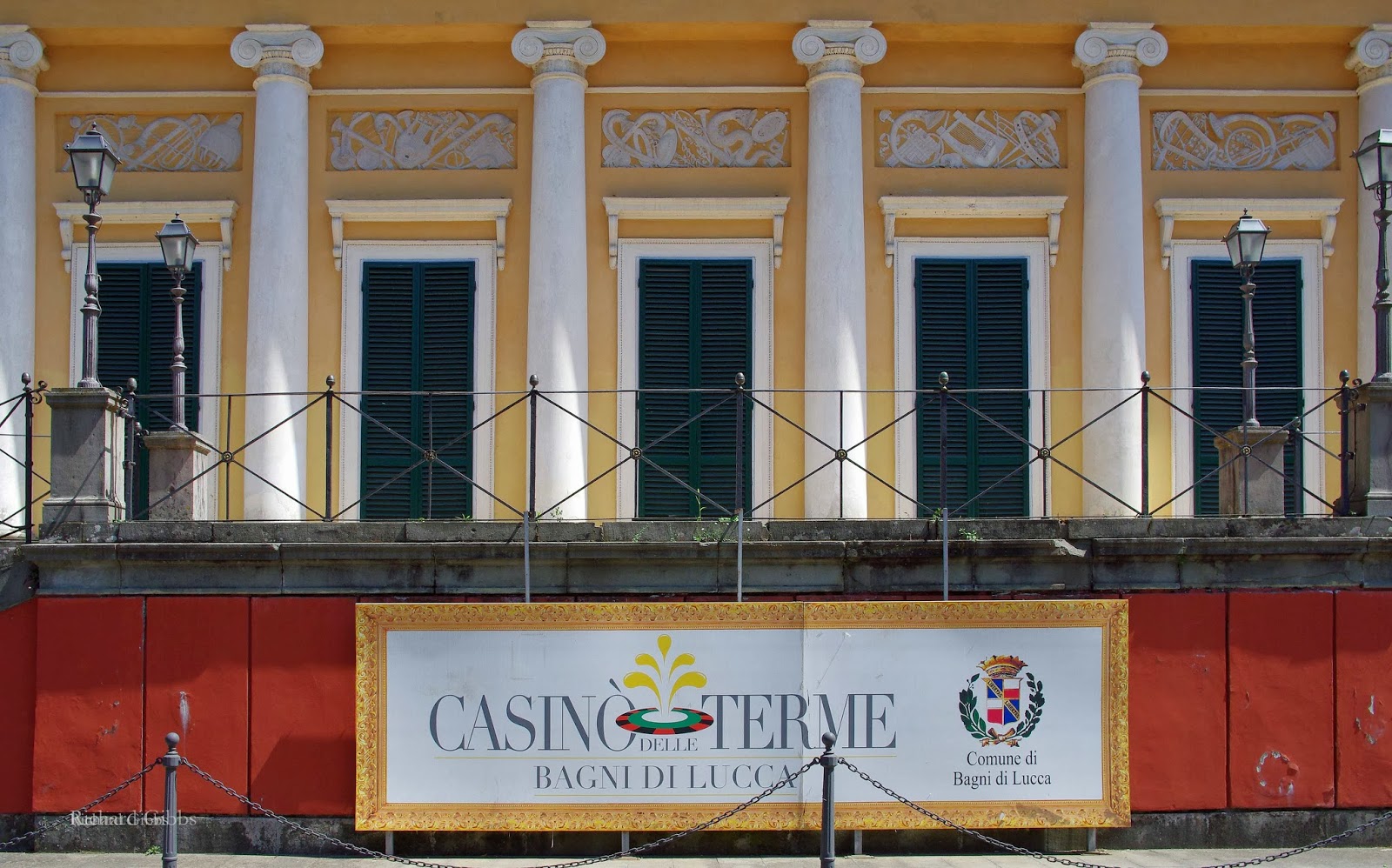 And although the resort of Bagni di Lucca still thrives, it was in a house such as this, below, that Shelley spent some time in 1818, translating Plato's Symposium, while Byron may have gambled in the Casino. 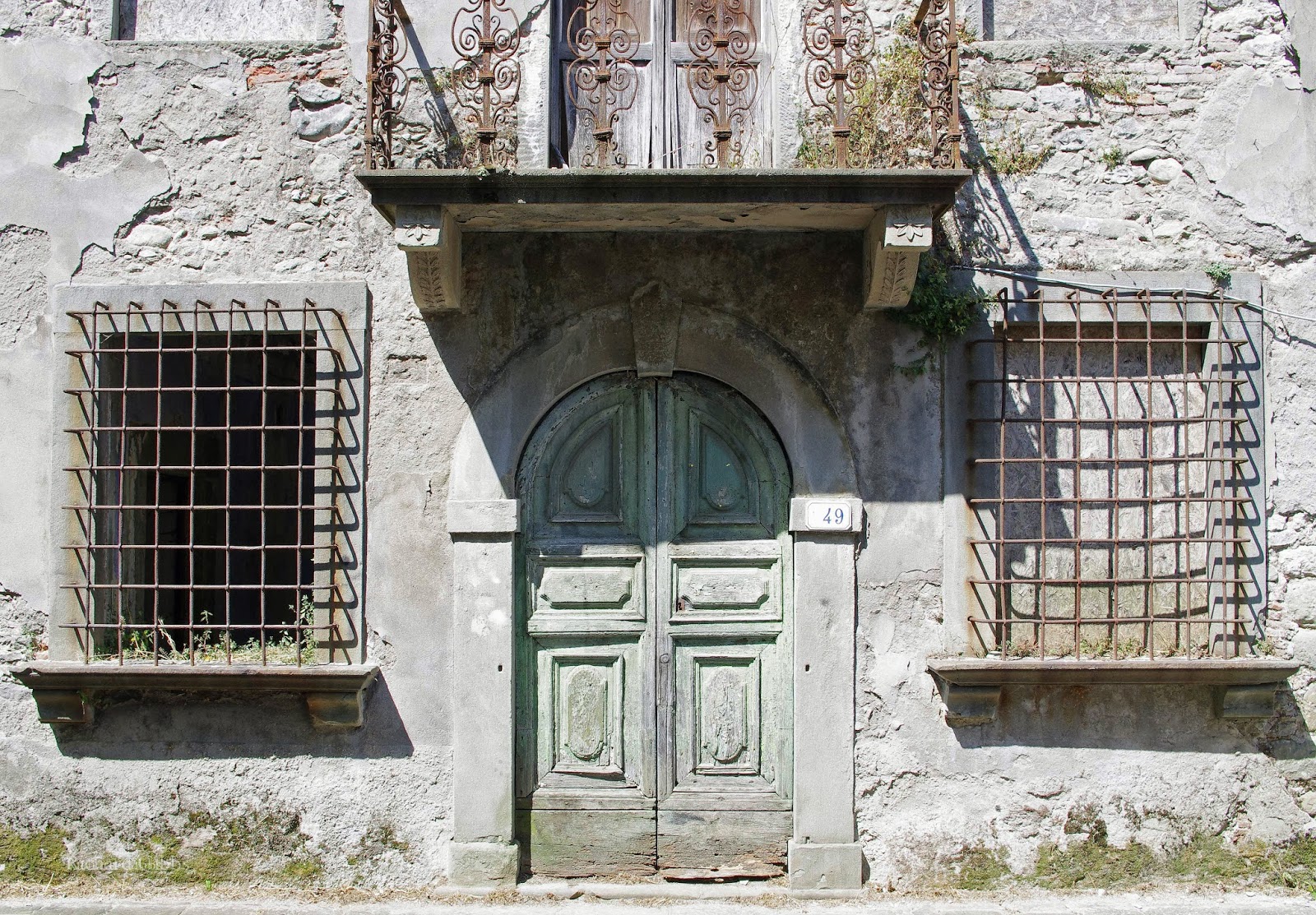 The river Lima flows past Ponte a Serraglio to join the Serchio which winds around Lucca on its way to the sea, 150 metres below.  This is beautiful Italy, and it is not surprising that poets have wanted to stay here..... 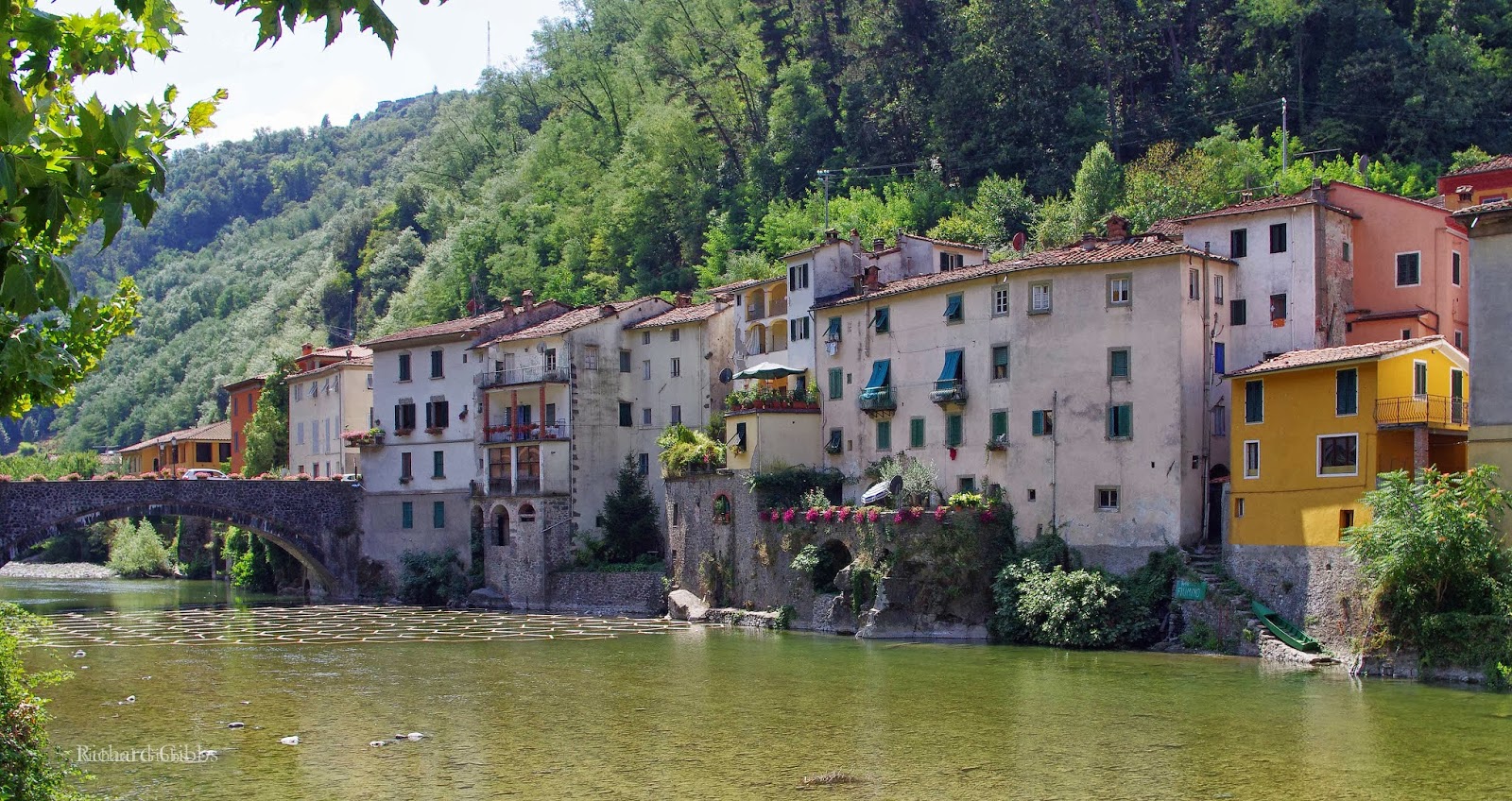 But back to Lucca herself.  The evening light strikes shadows down the streets: 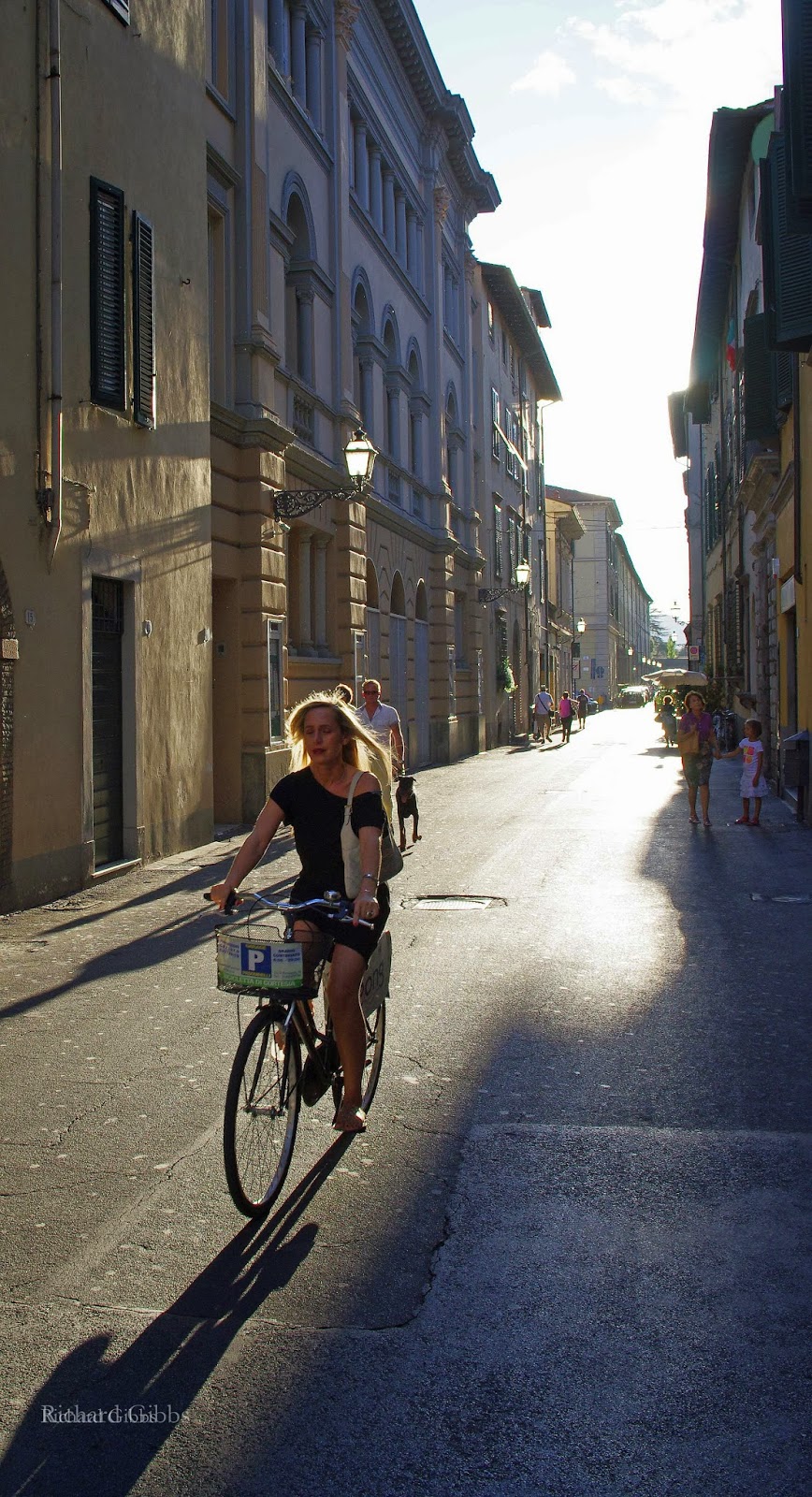 And it is time to dine: 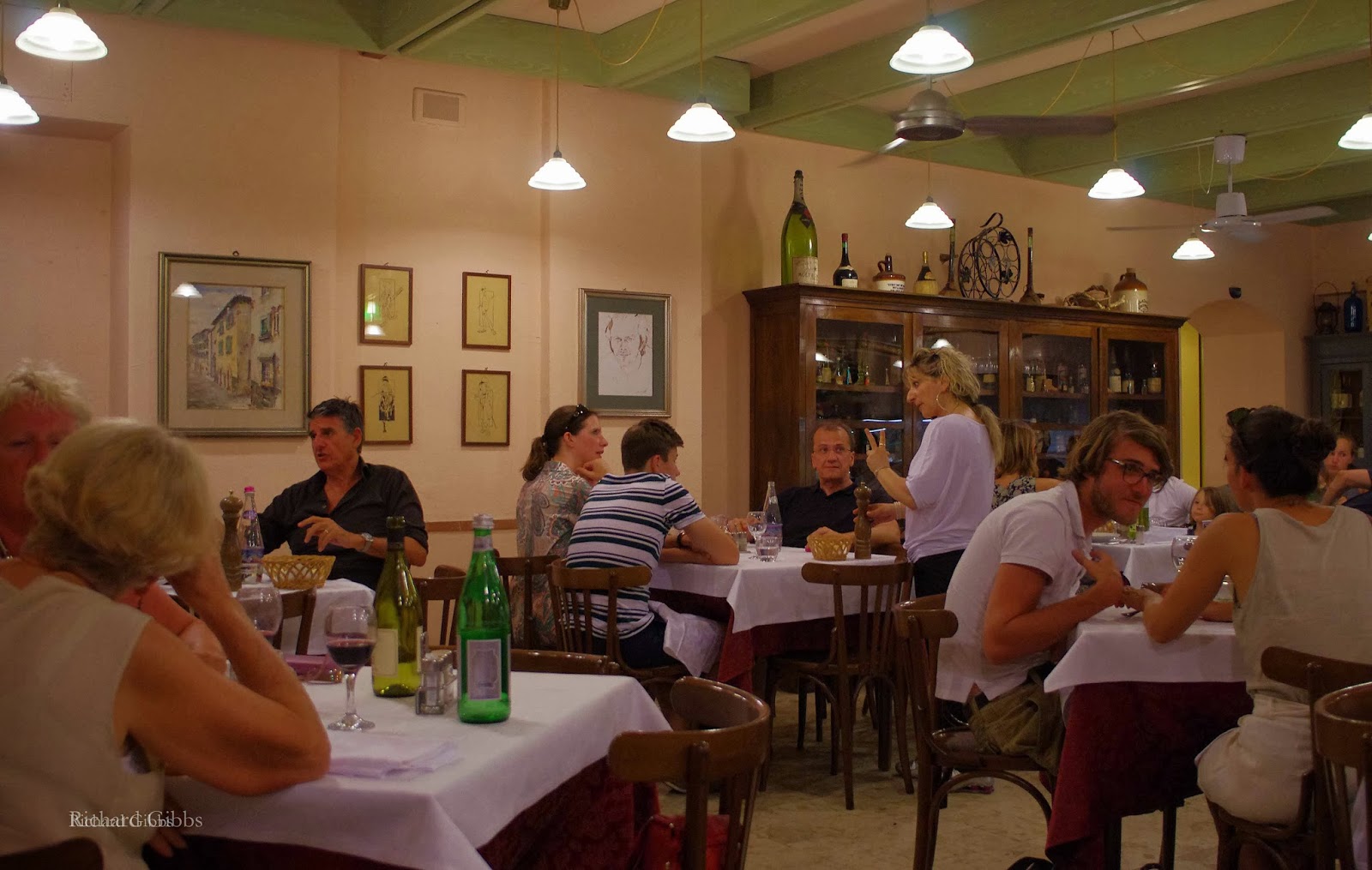 And the Trattoria da Giulio (Via delle Conce, 45) is the place to go.  A family run establishment (Giulio himself is now retired, but still drops in to see that all is well) this is gentle Italy at its very best.  I don't try the Tartara di Cavallo (Horsemeat Tartare), nor the Pulmone di Vitella in Umido (Stewed Veal Lung), nor even the Testina di Vitella Lessata (Boiled Veal Head) as a starter, but we do enjoy a caprese (mozzarella and tomato) salad, panzanella (bread and tomato salad), Tagliatella alla Contadina (home-made pasta with raw tomatoes, olives, olive oil and basil), Maccheroni Tortellati (flat pasta parcels filled with ricotta and spinach and served with a tuscan beef sauce) as well as local sausages with cannellini beans and Verdure Fritte (slices of courgettes and aubergines with courgette flowers, fried in a very light batter in the family's own olive oil).  And we try the Terre di Matraja Costa Toscano Bianco from the Fattoria Colle Verde, and finish with Vino Santo con Buccellato (Lucchese aniseed cake).
Aaaah! 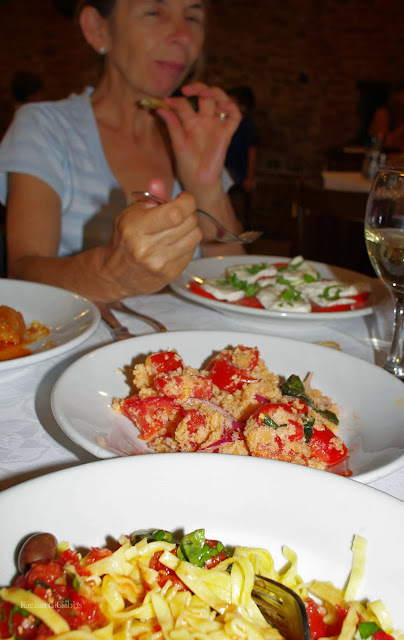 And then it is time to wander home.  The full moon bathing the city in her light, Puccini's o dolce viso/Di mite circonfuso alba lunar . 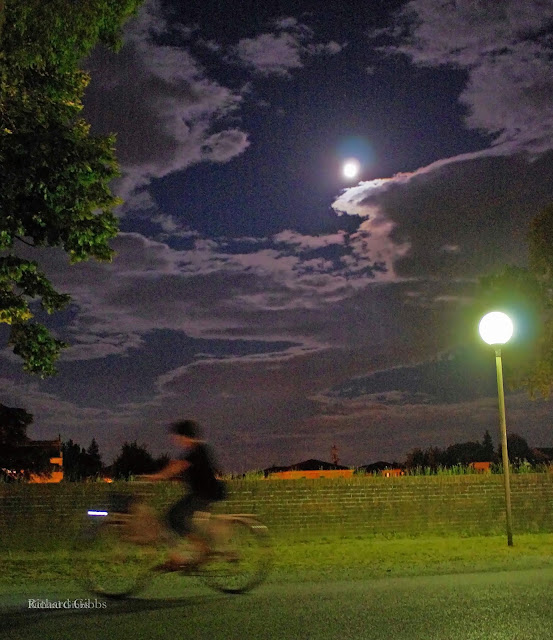 The dark streets lit subtly to highlight points of interest such as this fresco on the Porta San Gervasio: 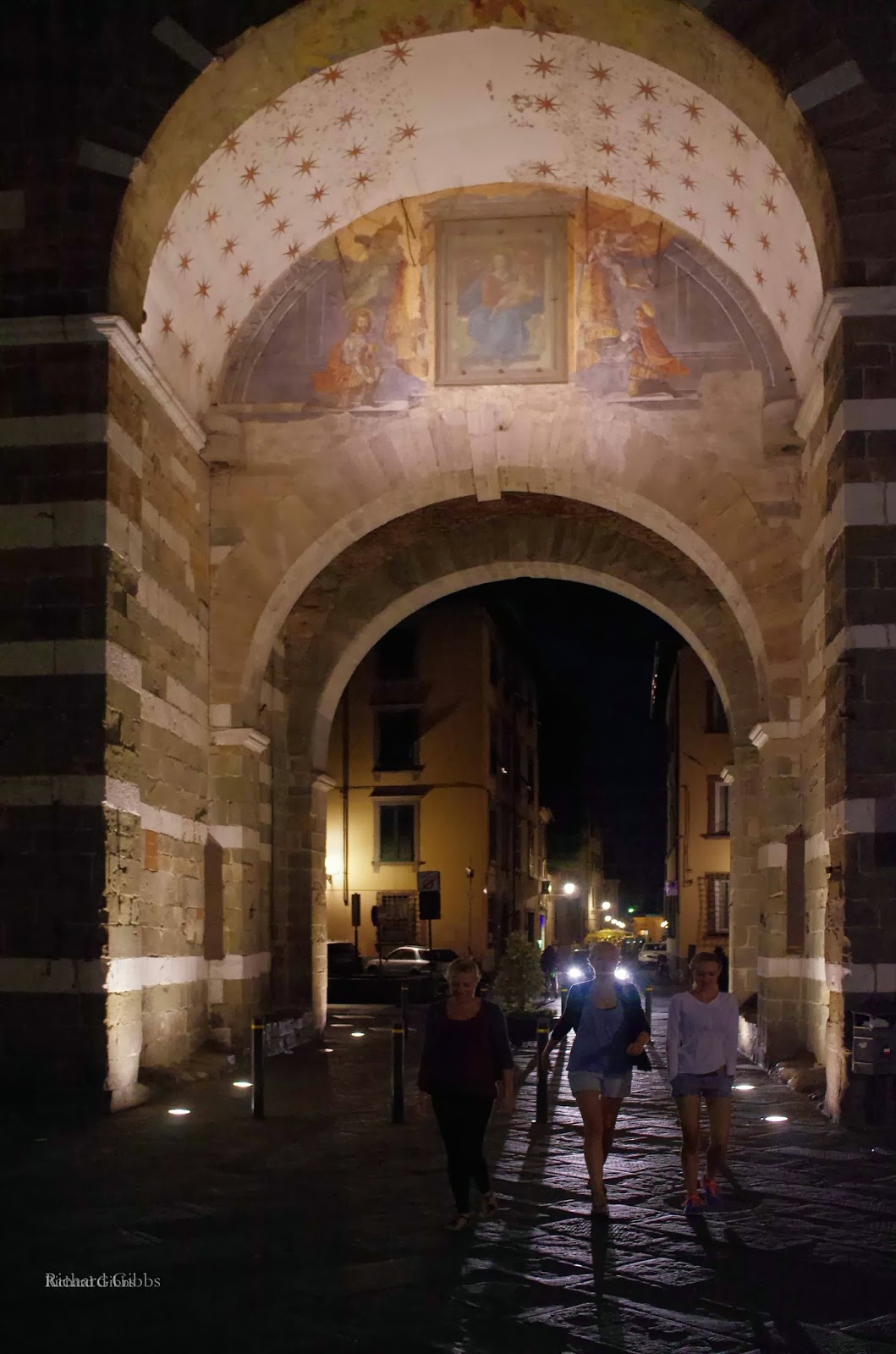 And the façade of the Cathedral lit to guide us safely across the piazza: 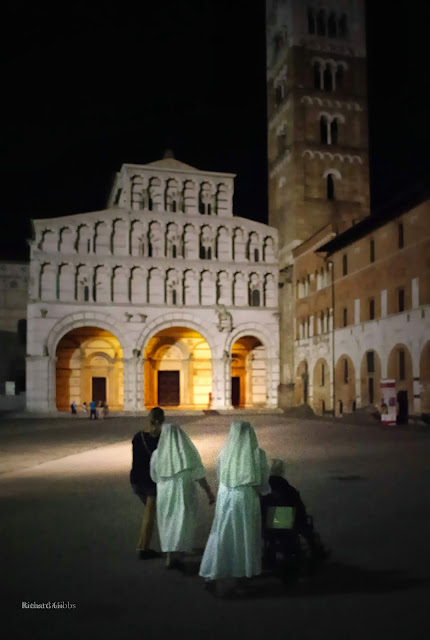 With a different angle on the idea of una soave fanciulla: 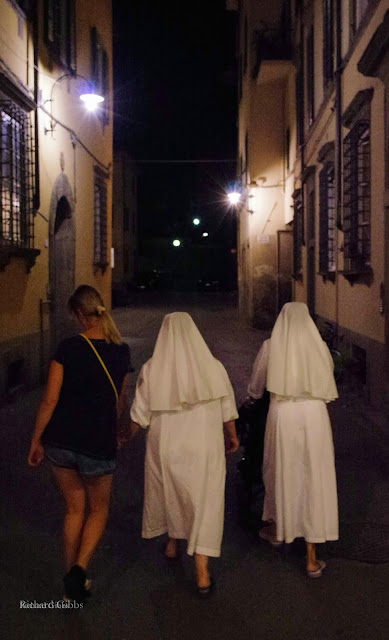 Which reminds me of Ilaria del Carretto, whose marble effigy lies in the Cathedral. She was the second wife of the wealthy merchant, and ruler of Lucca, Paolo Giunigi.  She died in childbirth in 1405, and her tomb was created in marble by Jacopo della Quercia.  Some twenty five years after her death Paolo was driven from Lucca and the tomb was removed and damaged.  The effigy remains, however, and in the moonlight it is a most fitting representative of the soave fanciulla that is Lucca. 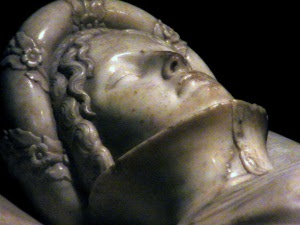 The Sicilian poet, Salvatore Quasimodo (Nobel Prize in Literature, 1959) paused before this likeness and wrote Davanti al simulacro d’Ilaria Del Carretto in his collection Ed e subito sera (Suddenly it's evening) in 1942 the title poem of which is: 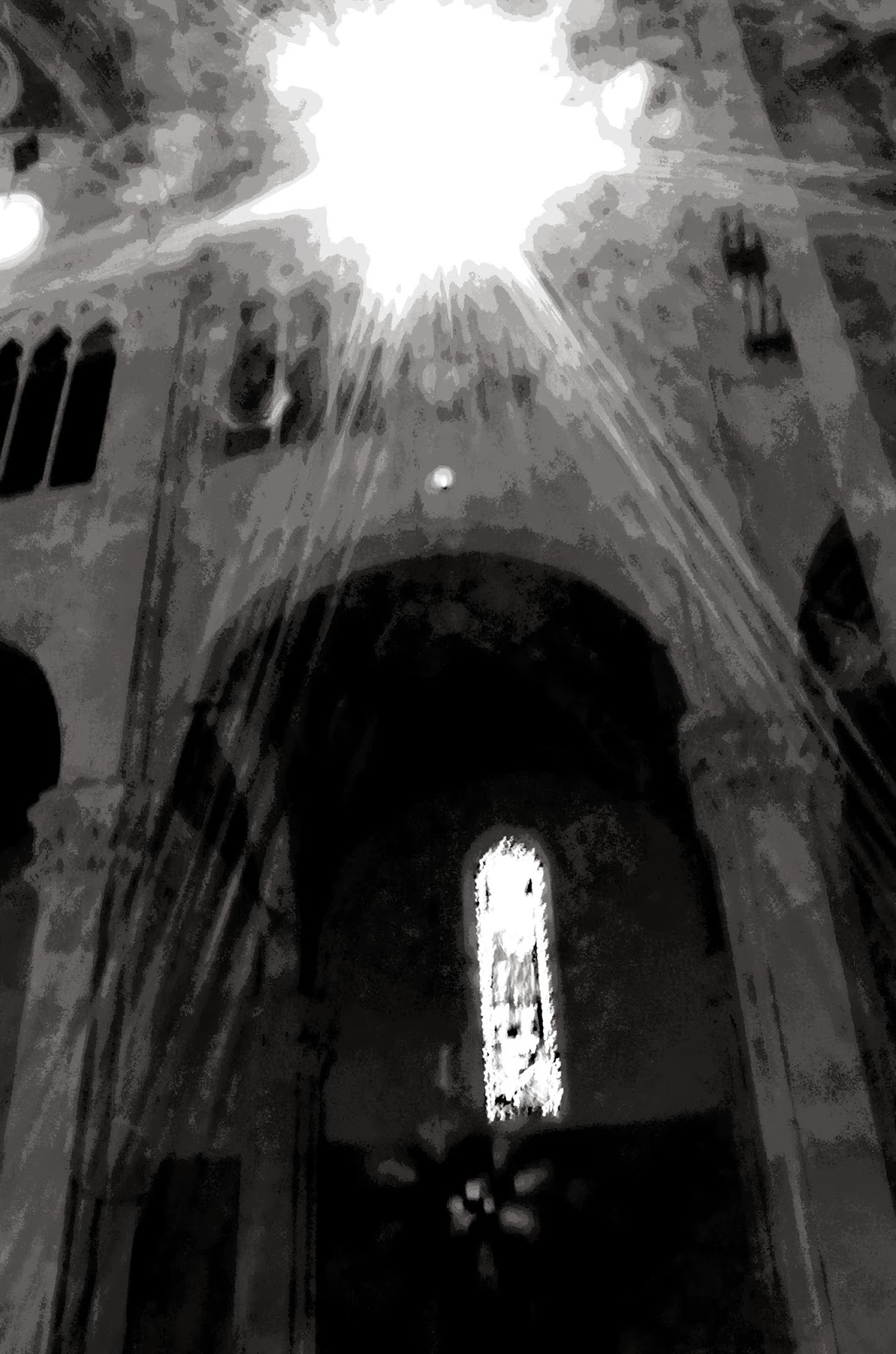 Quasimodo's musings before the likeness of the young bride are tender but his thoughts fly up, and out, to the paradoxes of love and life, and the sadness of death:
Sotto la terra luna già i tuoi colli,
lungo il Serchio fanciulle in vesti rosse
e turchine si muovono leggere.
Così al tuo dolce tempo, o cara, e Sirio
perde colore, e ogno ora s’allontana,
e il gabbiano s’infuria sulle spiagge
derelitte. Gli amanti vanno lieti
nell’aria di settembre, i loro gesti
accompagnano ombre di parole
che conosci. Non hanno pietà; e tu
tenuta dalla terra, che lamenti?
Sei qui rimasta sola. Il mio sussulto
forse è il tuo, uguale d’ira e di spavento.
Remoti i morti e più ancora i vivi,
i miei compagni vili e taciturni.
(Under the gentle moon the hills that were yours,
girls in red and turquoise dresses
move lightly along the river bank.
As in your time, dear, Sirius
pales, and drifts further away each hour,
and the seagull rages on the abandoned
beaches.  Lovers stroll happily
in the September air, their gestures
underlining echoes of words
that you know.  They have no pity.  And you
trapped here on earth, why are you sad?
You are left alone.  My tremor
is perhaps yours, equally angry and afraid.
The dead are remote, the living more so,
my companions mean and speechless.)

The idea of una soave fanciulla is not such a simple one.  The tinge of regret here beautifully captures the tranquillity of the effigy, and the stillness of Lucca under the moon.
Lucca is very much una dolce fanciulla.

[But there are also other metaphors within this..... 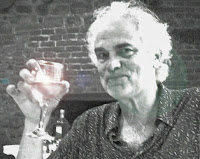 For an interesting take on the effigy of Ilaria del Carretto:


And Mirella Freni as Mini and Luciano Pavarotti as Rodolfo: