The photo above, though clearly not of NASA quality, shows the Island of Giglio as it is, a rocky landmass in the sea.  Boats of all kinds crawl across the blue surface of the watermass to park in its harbour at Giglio Porto, or to moor in one of its many attractive bays.

These days the island depends on tourism, and bays such as Arenella, below, have enough beach and clear, safe swimming, to content the many visitors who crowd over on the summer ferries from Porto Santo Stefano. 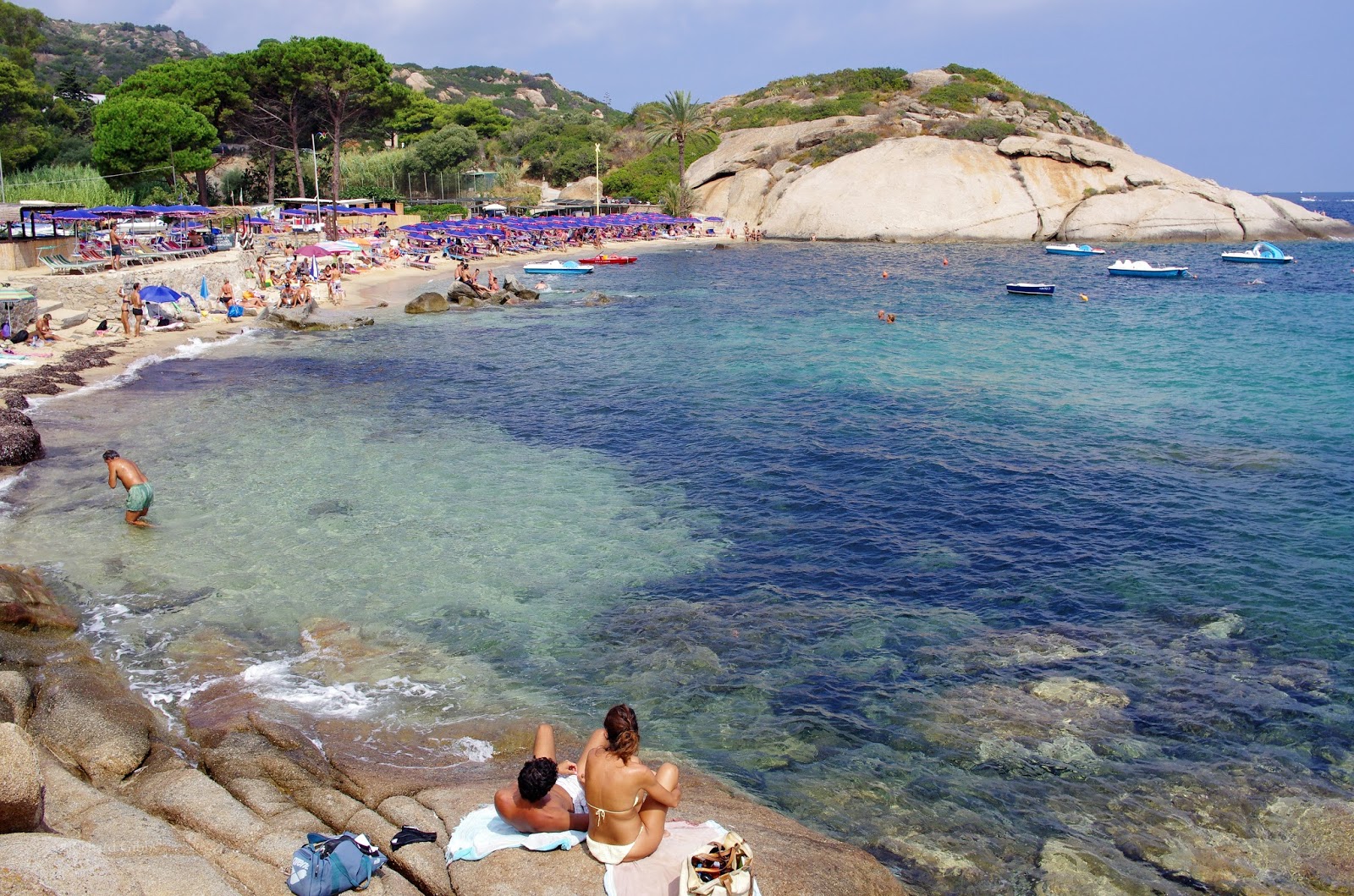 If you look a little closer, however, you may notice that the tortoise like rock to the north of this bay looks hard.  Indeed, on closer inspection, it turns out to be a major lump of granite, and indeed most of the island has been patiently, geologically, constructed of this material. 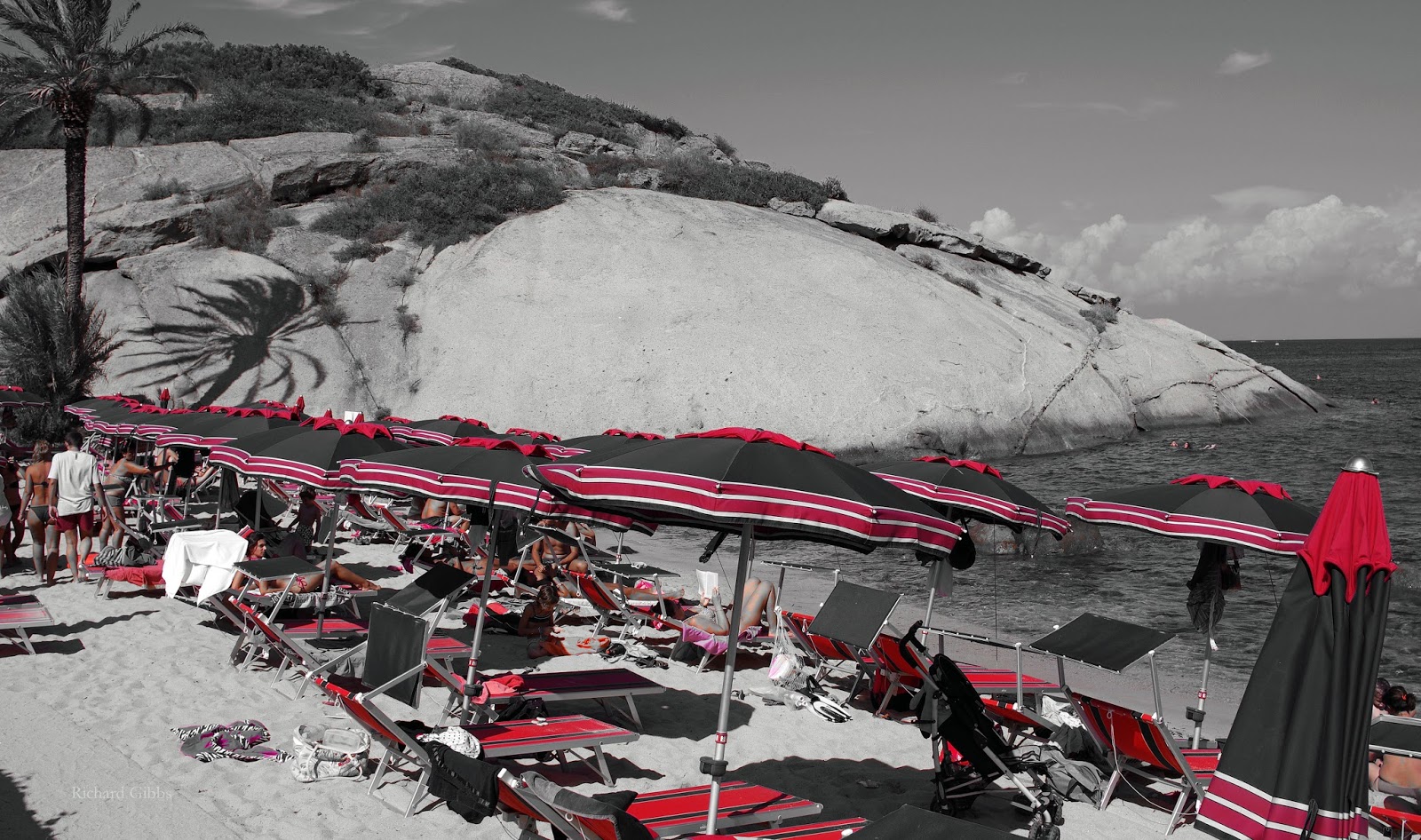 Look up inland as well and you will see steep, rocky hills, in this case topped by the impregnable village of Giglio Castello - made of granite.

So look back again to the first picture, and you can see those features - at the top of the island to the right of the clouds. You can just make out the white trails of boats coming into Giglio Porto, the embracing arms of the port itself, and the rocks that drip into the water like candle wax down the side of a bottle. But there is a blip on this picture. Almost central at the top there is a white shape that is not attached to the land, and is not an islet either.


So how did it come to this? The story is quite simple. The Costa Concordia a 952-foot (290-metre), 114,500-ton luxury cruise ship belonging to the Costa Crociere Company, part of the American-based Carnival Corporation, struck a rock off the western coast of Italy on January 13th, 2012, leaving 32 dead. 51 year old Captain Francesco Schettino was indicted in May on charges of manslaughter and abandoning the ship while many of the 4,200 passengers and crew were still on board.


An Italian court has now convicted five men of manslaughter over the shipwreck. Two officers, the helmsman, the head of cabin service and the head of the crisis team were given up to two years and 10 months in jail for multiple manslaughter, negligence and shipwreck.


They had agreed plea bargains and may avoid prison as sentences under two years in Italy are normally commuted to community service or suspended.

Captain Francesco Schettino is being tried separately. He is charged with multiple manslaughter for causing the shipwreck and abandoning the vessel with thousands still aboard. His case will resume on 23rd September, and his request for a plea bargain has been rejected by the prosecution.

One report says, "The vessel was holed by rocks just as many passengers were dining on the first night of their cruise. A disorganised evacuation followed as many of those on board panicked when the ship began to tilt to one side," but this suggests that the rocks were to blame, which is essentially Schettino's defence. 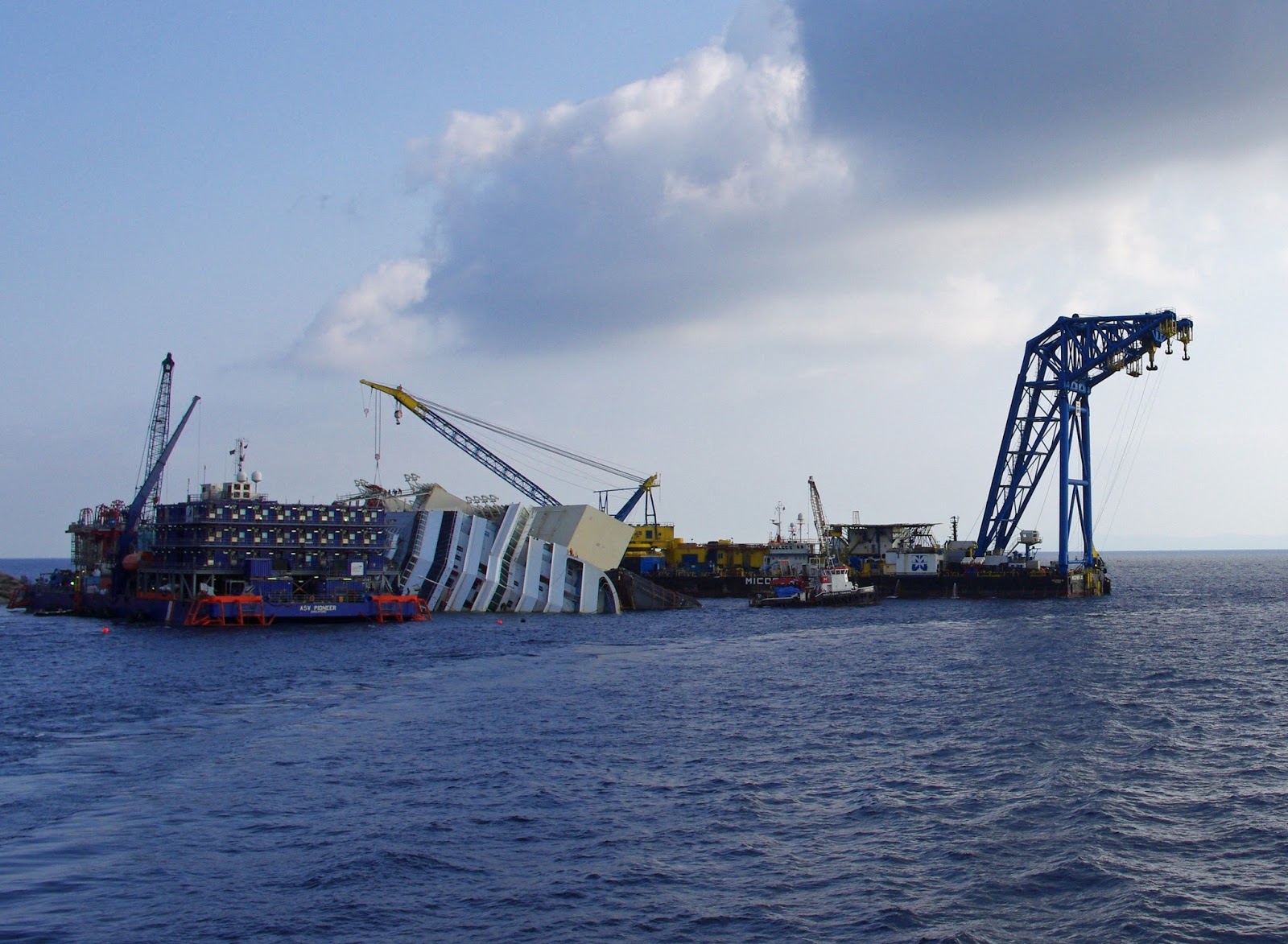 Although the facts will perhaps be clarified during the trial, it has been suggested that Schettino was trying to impress 25-year-old off-duty hostess Domnica Cemortan, from Moldova, partly by sailing close to the island and partly by not wearing his glasses. Not only this but he was also on the phone to a friend at the time of the accident. According to a naval expert, the ship was going too fast (15 knots) and the captain then compounded the problem by steering drastically away from the rocks when he realised his ship was in danger of mimicking the Titanic, with the granite rocks of Giglio playing the iceberg.  Instead of glancing riskily by, therefore, he swung the fragile hull into full contact with the rather tougher material that is the island, causing a 70 metre gash below the water line.

For Schettino this was not the end of his vainglorious misdemeanour, however, as he then ordered abandon ship and promptly followed his own instruction. No Laurence Naismith, nor Bernard Hill (both of whom portrayed Captain Smith of the Titanic on film), this Neapolitan hero was repeatedly told by the Coast Guards to get back on his ship: Gregorio de Falco, a supervisor of the Livorno Coast Guard, was recorded saying this: "Listen Schettino, there are people trapped aboard, you go with your lifeboat under the prow of the ship on the port side and you go aboard the ship using the rope ladder. You go aboard and you tell me how many people there are. Is it clear? I'm recording this conversation, Commander Schettino."

The port, which was a scene of terror and disaster in January 2012, as the ship foundered within sight of the houses on the front, managed superbly.  This was the largest ever passenger shipping incident (although the death toll was significantly different, the number of people involved was almost twice that of the Titanic) and the island responded immediately, opening hotels that had been closed for the winter, serving food and drinks for free and comforting the distressed.  Mario Pellegrini, the Deputy Mayor, even boarded the stricken vessel looking for the Captain, to no avail.

Now, eighteen months on, the wreck is still there. On the plus side, the fuel tanks were successfully drained with little or no oil spillage, but as the hulk decays in the water, all the personal belongings, stores, batteries, materials, chemicals etc on board leach imperceptibly into the sea, and who knows what environmental damage is being done? Snorkelling only a short distance from the site, I saw plenty of fish that seemed healthy enough, but a small sea bream swam past me with one eye hugely enlarged in a bizarre way. Natural defect?  Or a sign that not everything is right with the world? 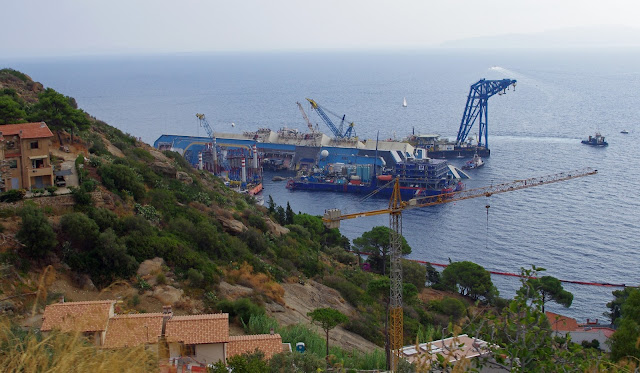 Apart from the loss of life (thirty-two confirmed victims) and the loss of the ship, and not counting the possible advantages to the island brought by the international infamy of this event (thousands more tourists coming to see the sight, five hundred workers and thirty vessels round the clock for eighteen months or more) the cost of this discord will reach over four hundred million pounds. 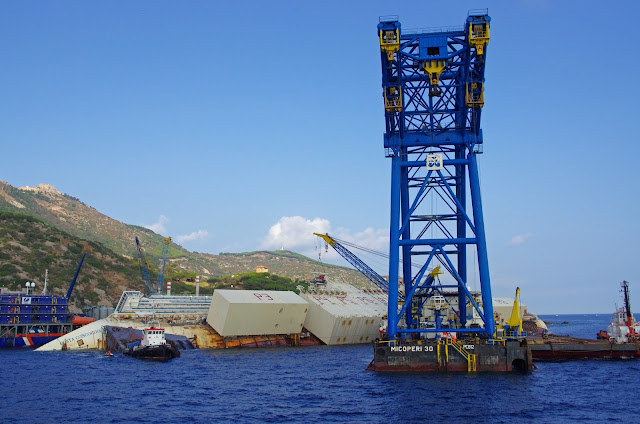 As things stand, the plan to remove the vessel is three-quarters complete. On August 27th (2013) Titan Salvage/Micoperi (the firms jointly engaged in floating the wreck) stated that they hope to have the hulk upright in September. This involves welding flotation tanks (sponsons or caissons) to the port side and blister tanks to the bow (nearly all done) then rolling (parbuckling) her into a cradle of six subsea platforms on which the ship will rest once upright. Each platform measures about 10 metres long by 22 metres high and weighs about 1,000 tons. The platforms are supported by large pillars that are attached to the granite seabed at a depth of about 10 metres. Then, when flotation tanks have been welded to the starboard side (to make a total of 15), all these tanks will be emptied of water and the ship will rise from the sea bed, and be towed away to be scrapped. 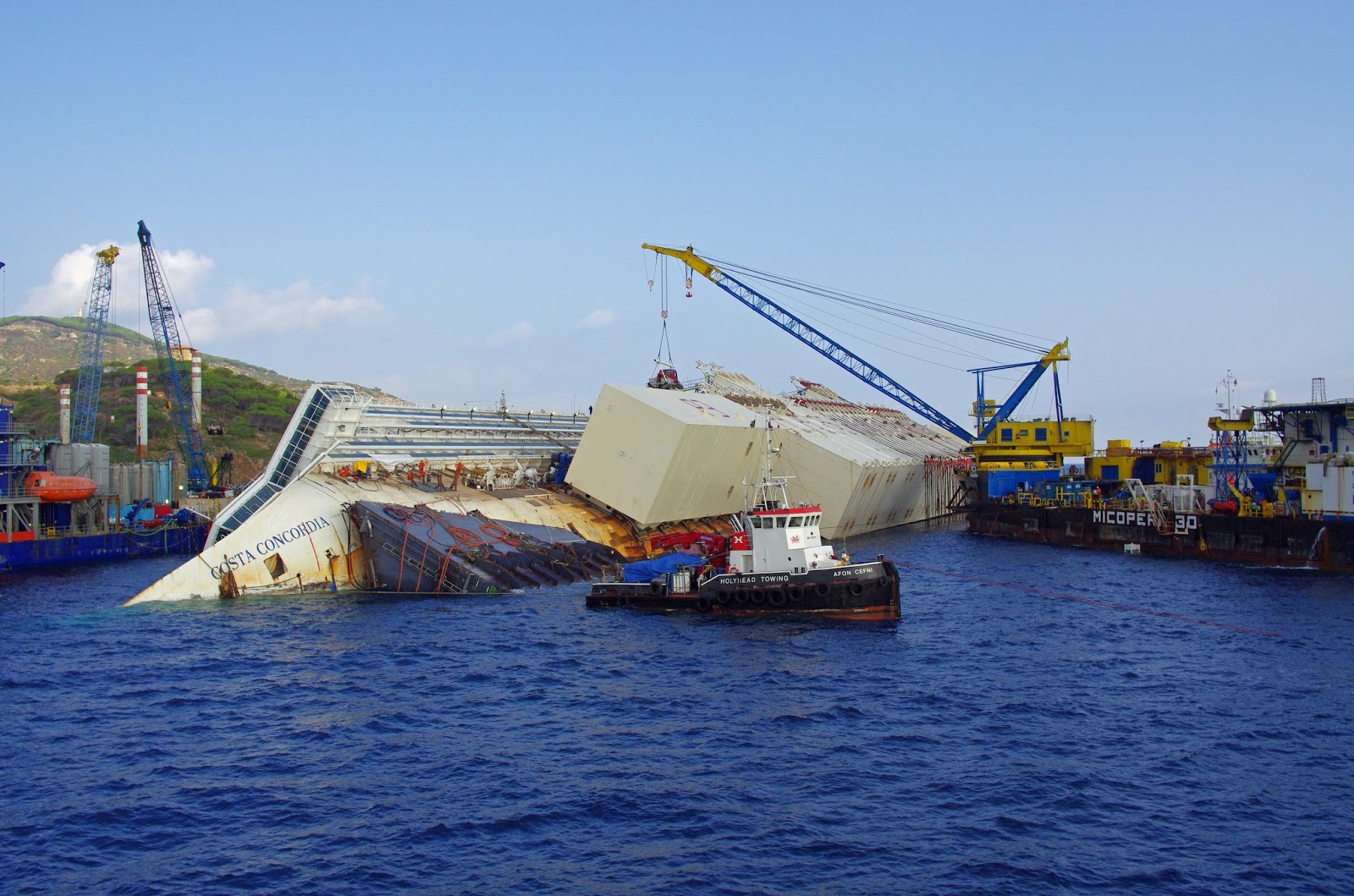 The story has been called a tragedy, but this would elevate Captain Schettino, and in the end he will never suffer as his victims have. On the same day that we visited in August this year, Elio Vincenzi, the husband of Grazia Trecarichi, one of the two people missing presumed drowned in the incident, dived twenty five metres down to pay respects to his wife.  He was accompanied by Mario Pellegrini, the deputy mayor of the island, and members of a Giglio Diving club. In July of 2012, he had dived to attach a plaque bearing his wife's name to the rock that tore the boat apart.  It is hoped that when the hull is righted, the body of his wife, and that of an Indian waiter, Terence Russel Rebello, the other missing believed drowned, may be discovered.

That particular story reminded me of another young woman who drowned. On July 18th 1969, American Senator Edward (Ted) Kennedy (youngest brother of JFK) drove a young woman, Mary Jo Kopechne, away from a Long Island party, and off a bridge on Chappaquiddick Island.  Ted escaped from the car, which was submerged and on its roof.  He left Mary Jo to drown and did not report the accident for hours. Had he been more responsible, and less self-interested, he could have summoned assistance immediately and she could have been saved (apparently she probably survived for at least half an hour in an air pocket). However, ambition, pride, politics and selfishness intervened and a young life was lost.

And the political strand there brings to mind the metaphorical elements of this incident.  Bryan Burrough, writing in "Vanity Fair," in a detailed account of the event, put it thus:  "The wreck of the Costa Concordia is many things to many people. To Italians, who dominated the ship’s officer ranks and made up a third of its passengers, it is a national embarrassment; once the pinnacle of Mediterranean hedonism, the Concordia was now sprawled dead on the rocks in a cold winter sea."  It is that phrase "The pinnacle of Mediterranean hedonism," which is the key.  Italy has a reputation for La Bella Vita, but why has it become necessary for over four thousand people to board a ship in Civitavecchia, to dine expensively, and to float about the Med in a steel hotel?  The Costa Concordia had, 1,500 luxury cabins, six restaurants, 13 bars, the two-story Samsara Spa and fitness centre, the three-story Atene Theatre, four swimming pools, the Barcelona Casino, the Lisbona Disco, even an Internet café, all wrapped around a dramatic, nine-story central atrium, itself a riot of pink, blue, and green lights.....

Where did this taste for international kitsch come from?  What is wrong with crossing from Porto Santo Stefano to the Isola del Giglio on the Toremar Ferry for a meal in the port or a day on the beach?


And I think the answer lies in a one-time cruise ship crooner, now condemned to prison for tax fraud.  Silvio Berlusconi.  His "captaincy" of Italy has been like the command of Francesco Schettino, full of careless self gratification.  The Berlusconi years have condoned the luxury yacht syndrome (though admittedly they did not invent it! I would not give Berlusconi credit for anything!)


And now both Schettino and Berlusconi are fallen. But they won't pay. Hope however lies in the people of Italy, like Elio Vincenzi, or Mario Pellegrini, or my friend Marco, below, who live their lives in moderation and at least comparative decency.   The Costa Concordia symbolised inflation, a false economy.  It hit the rocks, and ordinary people suffered.

Perhaps a lesson has been learned?


See also my previous blog about the island:

and then there are many websites with information about this, but notable are: