A Window on Bristol

The Clifton Suspension Bridge is one of Bristol's key landmarks: its bold leap across the Avon gorge was not completed until 1864, five years after Brunel's death (at the age of 53) but it was his masterpiece and is now a symbol not only of Bristol but also of Victorian engineering achievement.

The art, or science, of spanning any gap, however, goes back to the beginnings of time, and Stonehenge shows how early man did it. Very strong uprights and a strong cross-beam (lintel) did the trick.  This was good enough for the trabeated architecture of the Greeks, but the limitations of this led to the Romans developing the arcuated style. This used the semicircular arch which could expand the distance between uprights and carry much more load overall. Arches became the staple of the Romanesque style of architecture employed by the Normans throughout Western Europe in the Middle Ages.

Another fine arch in Bristol is that beneath the church of St John's, which was built in the 14th century when a new outer wall to the city was constructed, (the two smaller portals are only about two hundred years old). 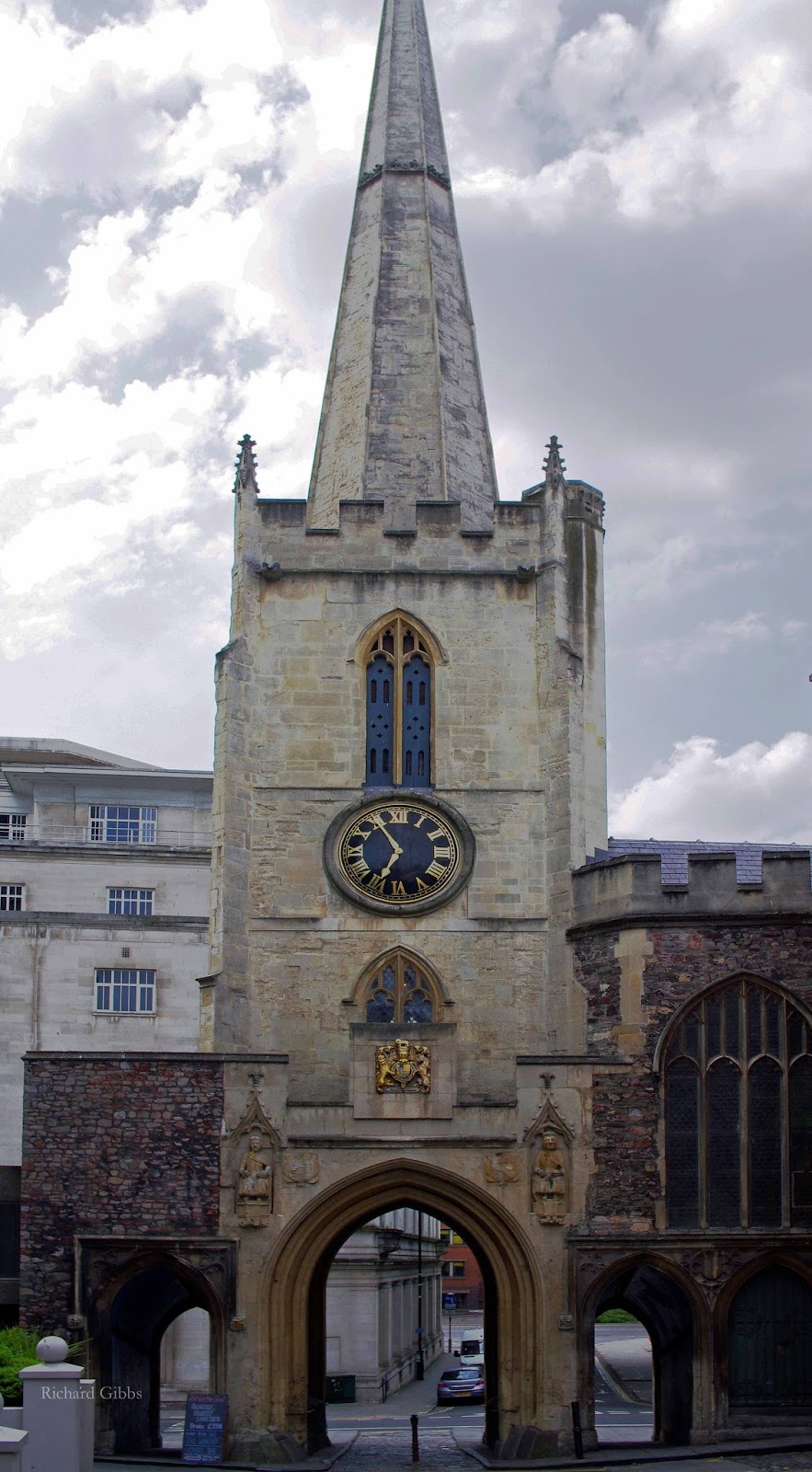 Outside the city walls the Lord Mayor's Chapel, or St Mark's, originally the Chapel of the Hospital of the Gaunts, is partly thirteenth century,

and within this are some ornate tombs, including those of the founders of the hospital, certain merchants and two crusaders. 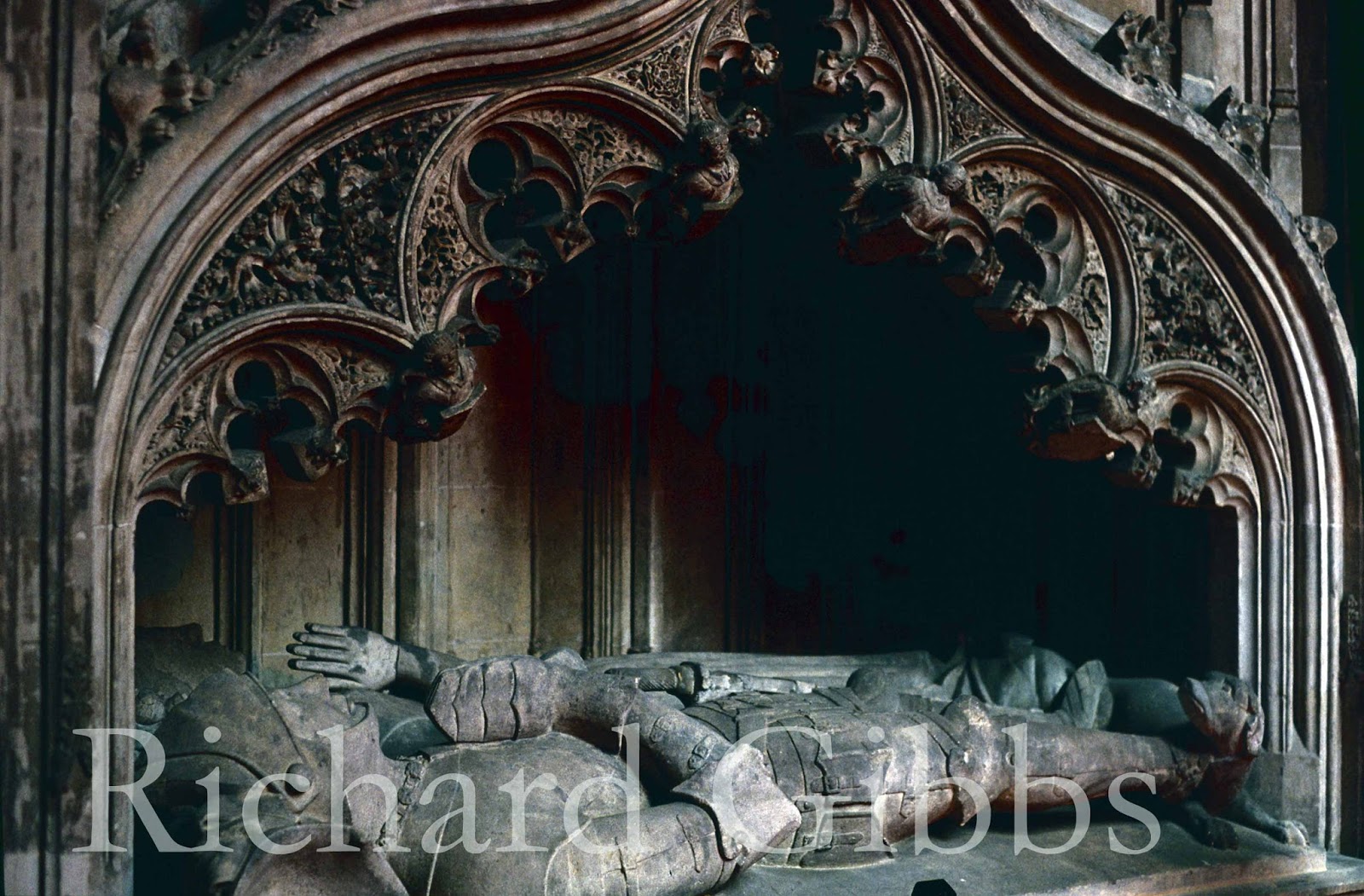 Another Bristol church where the arches reach up to vault across the ceiling is St Mary Redcliffe, the gold leaf on 1200 bosses glittering as they have done for centuries. There has been a church here for about one thousand years, though much of what you see now is fourteenth century. Queen Elizabeth I is said to have described it as "the fairest.... parish church in England" and both Robert Southey and Samuel Coleridge were married at its altar. 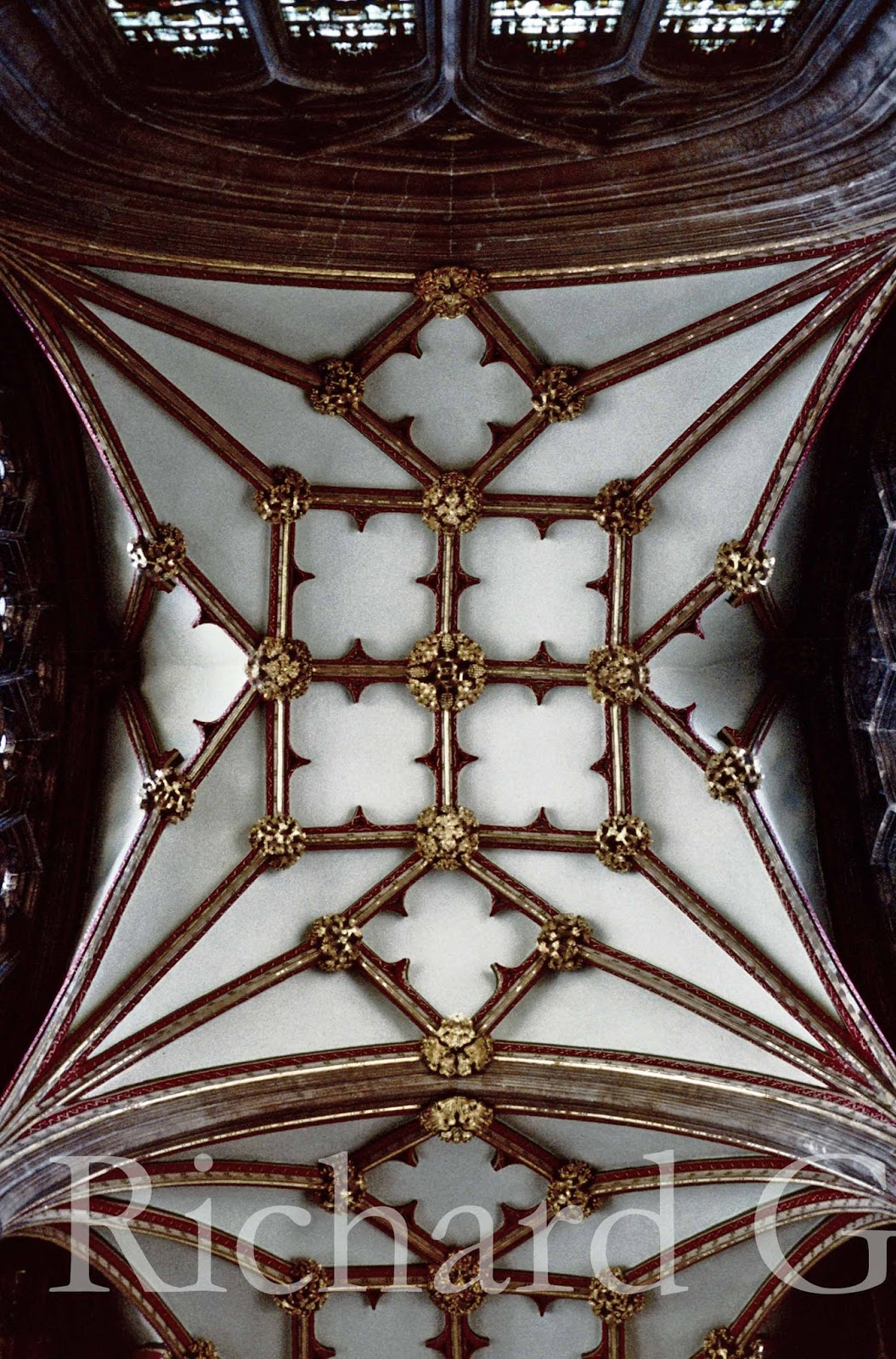 The East End of Bristol Cathedral, which includes the Elder Lady Chapel (completed in 1220), is, according to Nicholas Pevsner, "superior to anything else built in England and indeed in Europe at the same time," though the Nave and West End were completed in Gothic Revival style in the late 19th century. Another of its glories is the Chapter House (see above), but the effect of having the choir, the nave and the aisles all at the same height is inspiring.

The theme of arches was not restricted to the ecclesiastical world.  As the importance of Bristol as a port grew, several buildings were designed which went beyond the purely functional.  Much of central Bristol was destroyed in bombing raids between November 1940 and April 1941, when almost 1,000 tons of high explosive and incendiary bombs were dropped on the city in six major raids (one of which lasted twelve hours). German pilots found the city by following the glimmer of moonlight up the Avon, and Bristol was the fifth most heavily bombed British city in WWII.  1,300 people were killed and 90,000 buildings were damaged, including the Temple Church, which now stands roofless in Castle Park.

Some great buildings survived the war, however, though in certain cases they have not fared so well since.  The old carriage works at 106 Stokes Croft was built in 1862 in what is known as Bristol Byzantine style. The decoration seen here is much later.

Built in 1869, between Queen Charlotte Street and Welsh Back, just by the Floating Harbour, The Old Granary building is the epitome of the round-arched style known as Bristol Byzantine. The design was much influenced by the Arts & Crafts movement (William Morris et al) and its form was both decorative and practical for the drying and handling of grain. The particular character of this building derives from the Cattybrook bricks which came from Almondsbury, just to the north of the city (the same brickworks provided not only the materials for the Old Fish Market - now a pub - but also for the 1872 Severn railway Tunnel, which used thirty million of them). 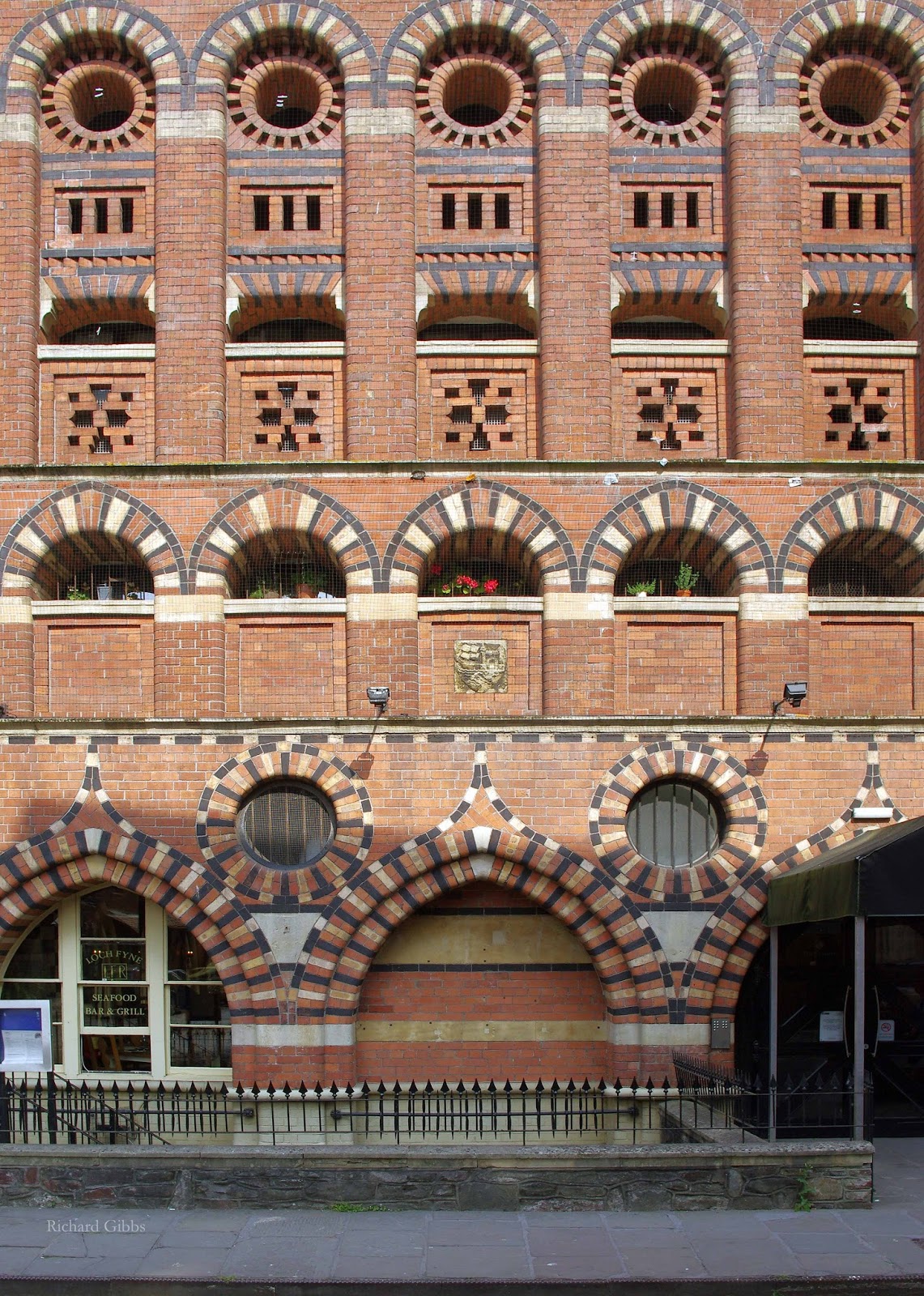 Another remarkable building, also indebted to William Morris (who is depicted on the facade) is the Edward Everard printing works which was built in 1900, the ground floor deliberately echoing the arches under nearby St John's. 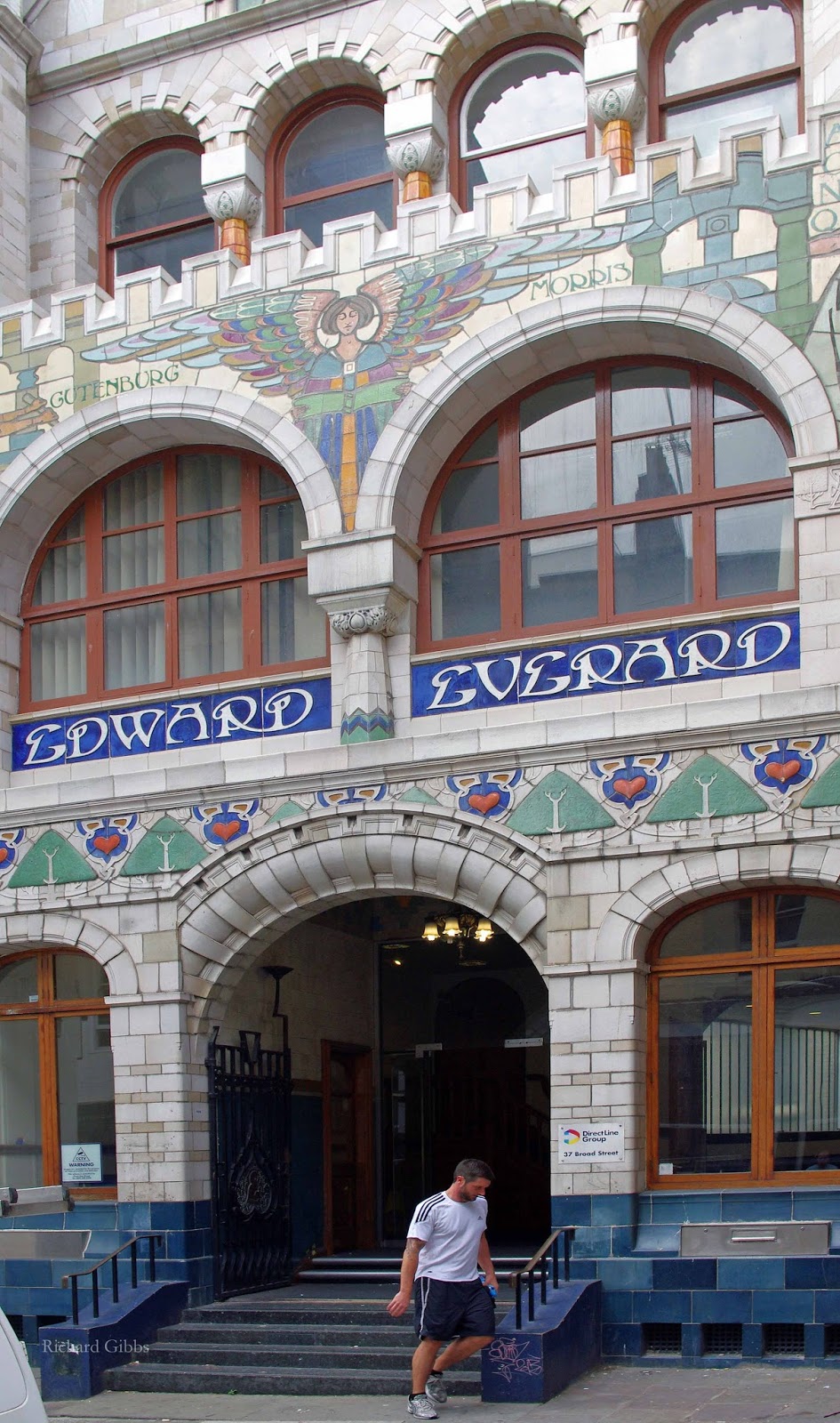 And one of the last great gothic buildings to be built in this country was the Wills Memorial Building of the University of Bristol.  Within this complex is the Great Hall, which can seat 800.  This was commissioned in 1912, but due to WWI was not completed until 1925.  The Hall was then badly damaged in the Bristol Blitz and not restored until 1960. 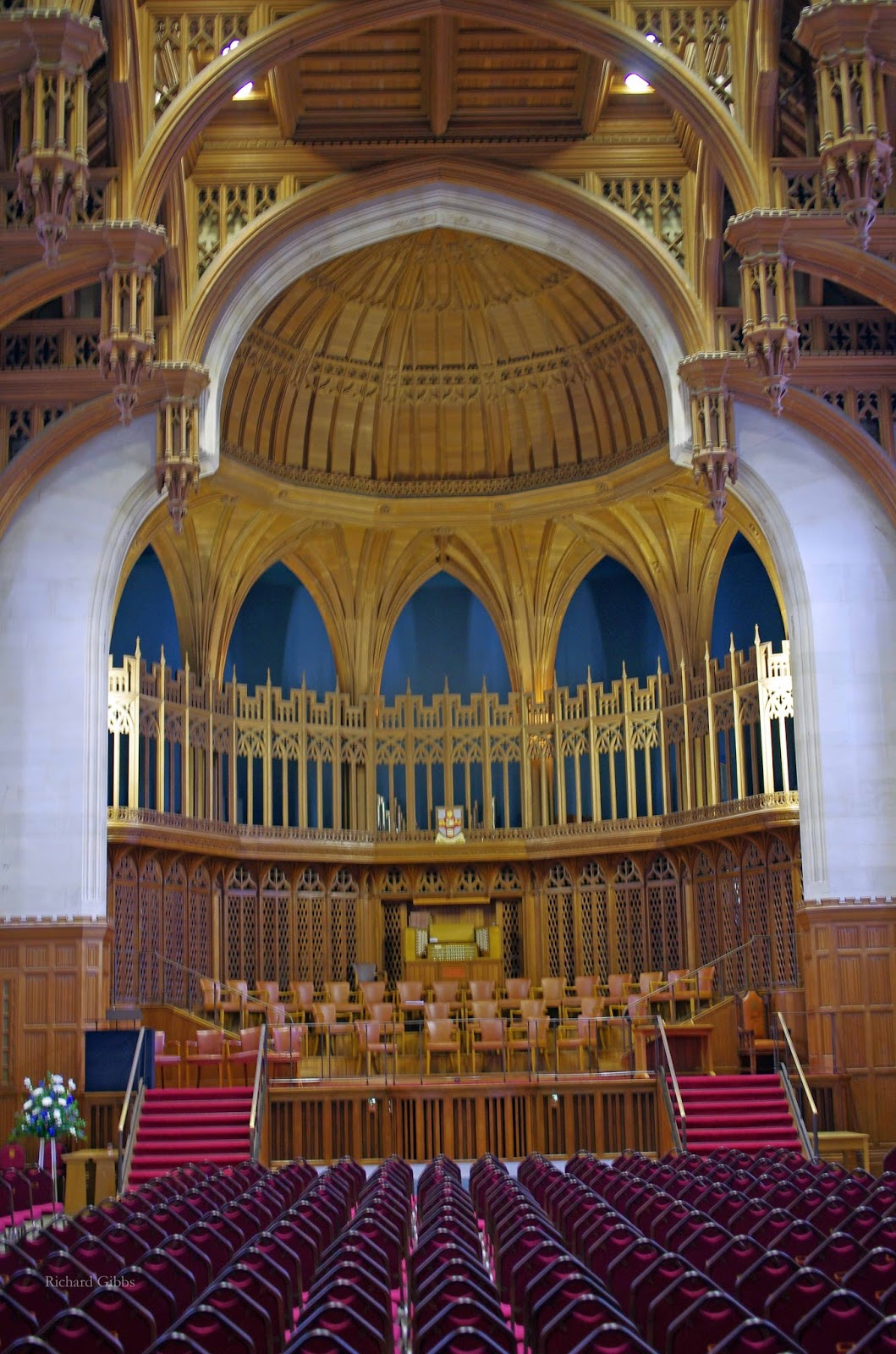 Naturally other decorative arts have been practised in Bristol, and one of its best known paintings is Henrietta Mary Ada Ward's "Thomas Chatterton" which was painted in 1873, (though the most famous aspect of this picture may be that John Everett Millais added the kitten's tail before it was exhibited at the Royal Academy). 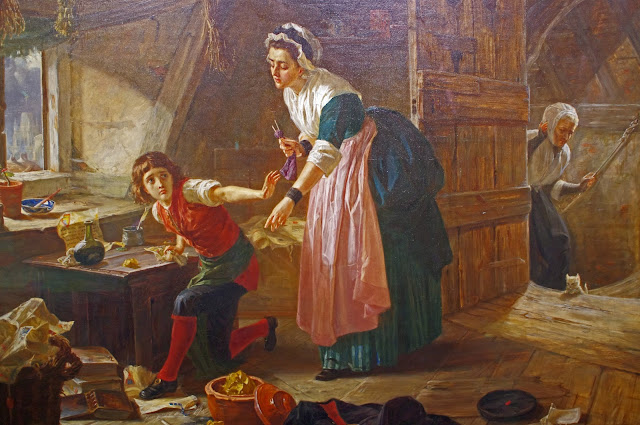 There are galleries in Bristol, from the Bristol Museum and Art Gallery, to the Royal West of England Academy of Arts, to Spike Island to the Arnolfini (itself a magnificent building, where a recent exhibition of work by Ian Hamilton Finlay touched back to the gallery's foundation in 1961). 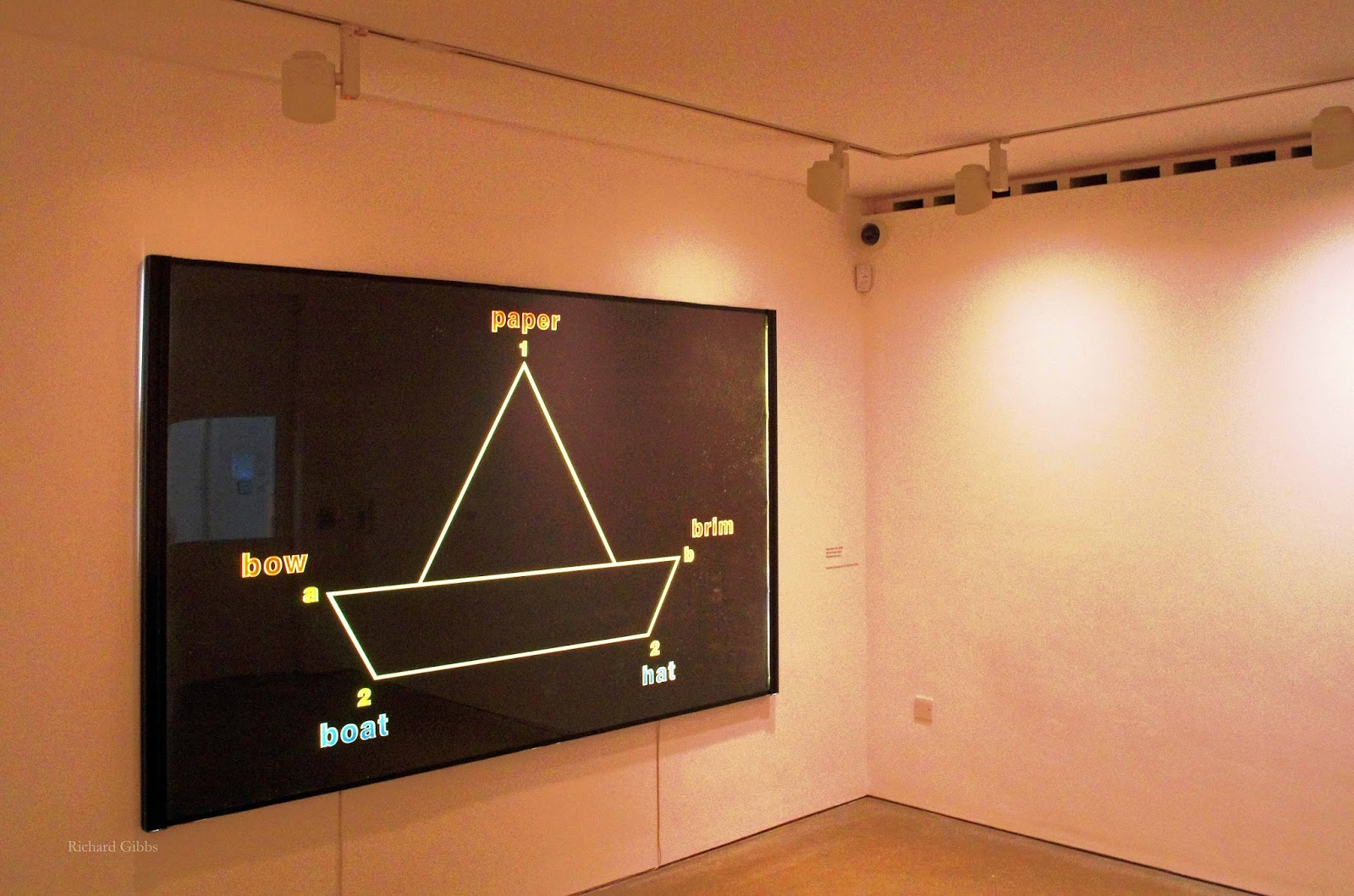 More recently, Explore@Bristol was developed, using a great deal of glass and concrete, but also providing the site for the Orange Imaginarium, designed by Wilkinson Eyre, and reflecting the light, and activities, of the Harbourside. 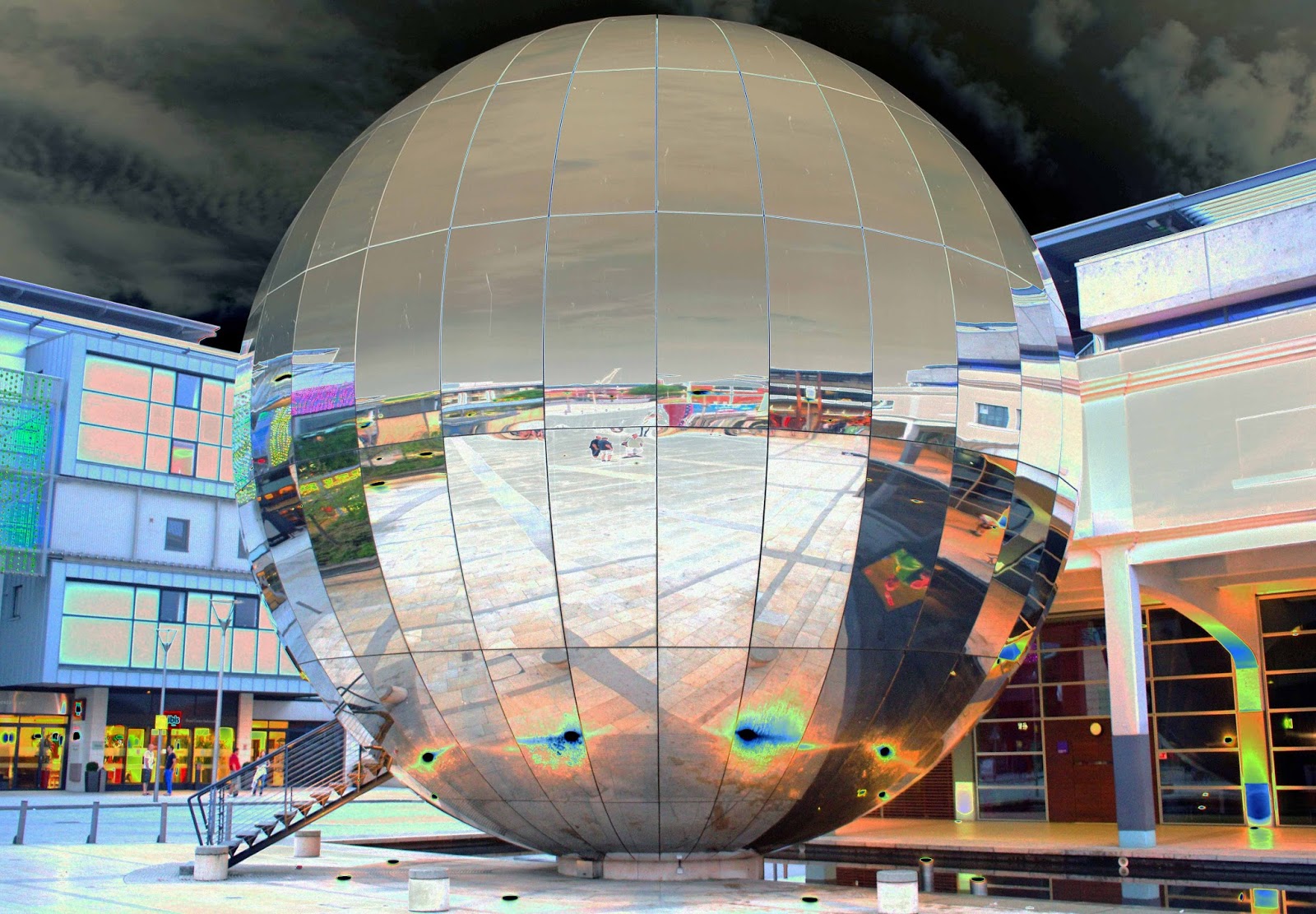 And then there are the walls, and corners, and gates and doorways of Bristol where Street Art has been developed to world class.


Some of these are unsigned, anonymous and collaborative.  And they themselves become the ground for further decoration, sometimes effective and sometimes not.

On Stokes Croft, Cosmo Sarson has created a giant mural inspired by a breakdance performance for Pope John Paul II in 2004: 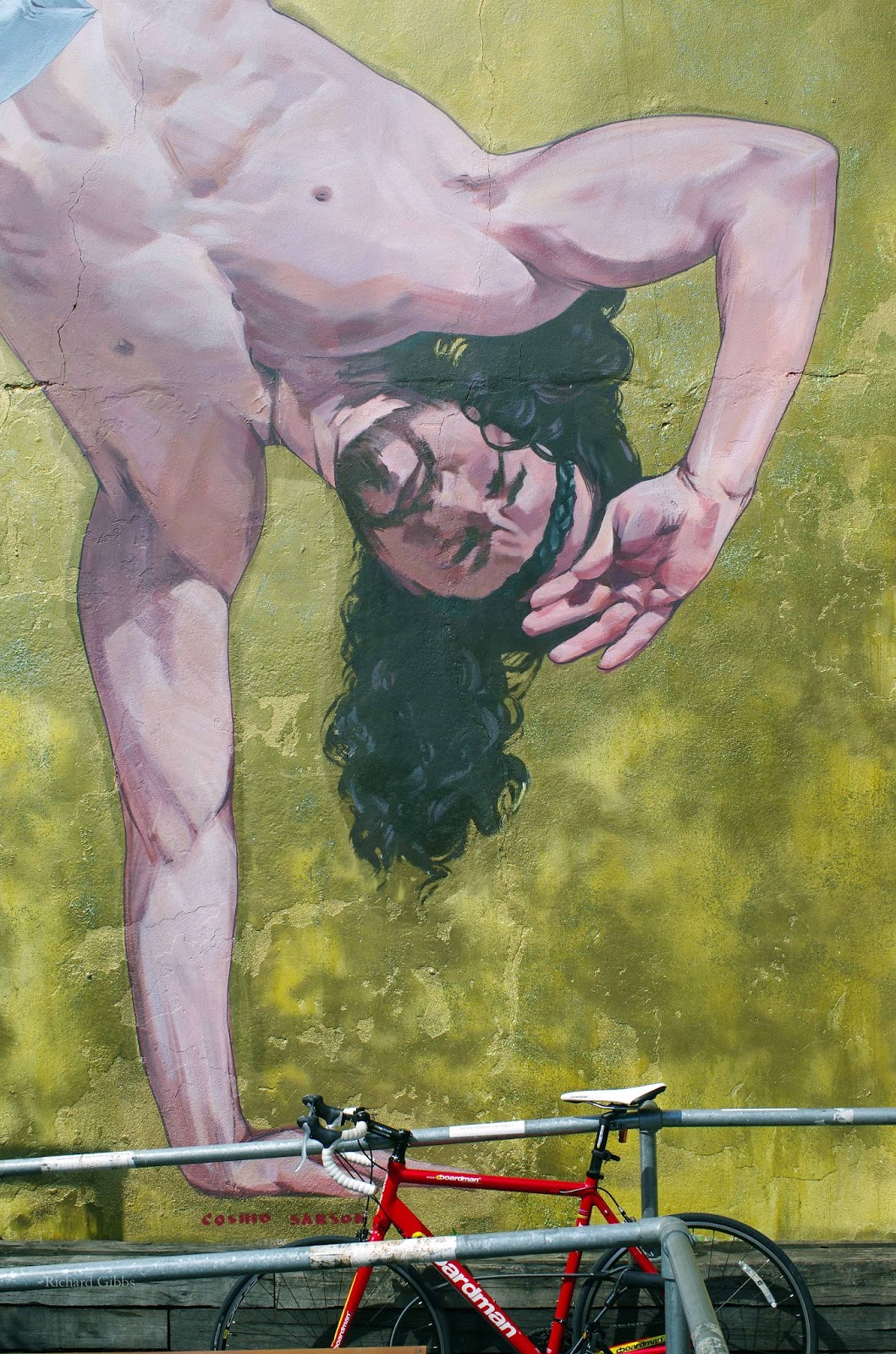 Nearby, fences and buildings are covered in bright graffiti and stencils: 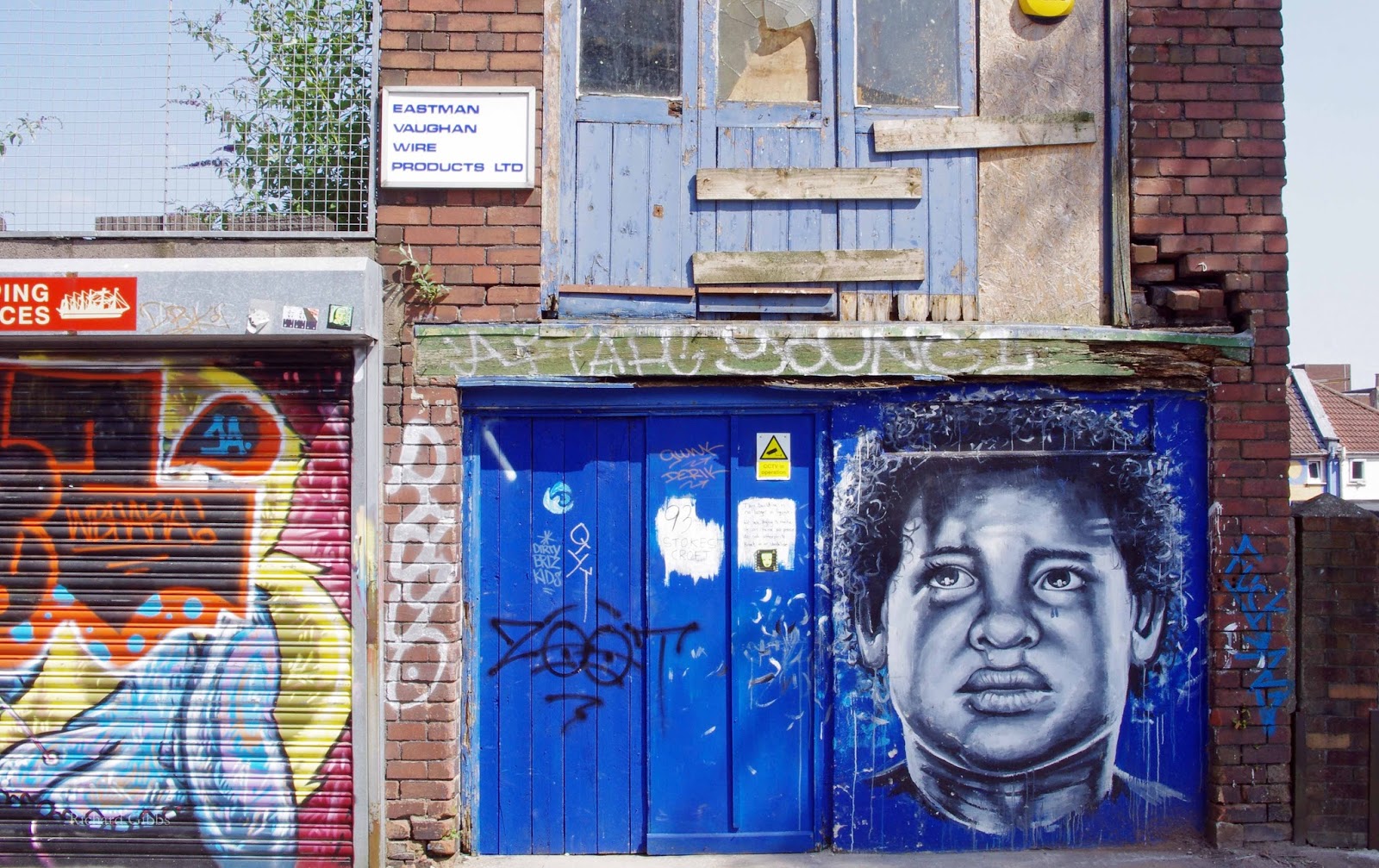 An alleyway off Stokes Croft has been colourfully enhanced: 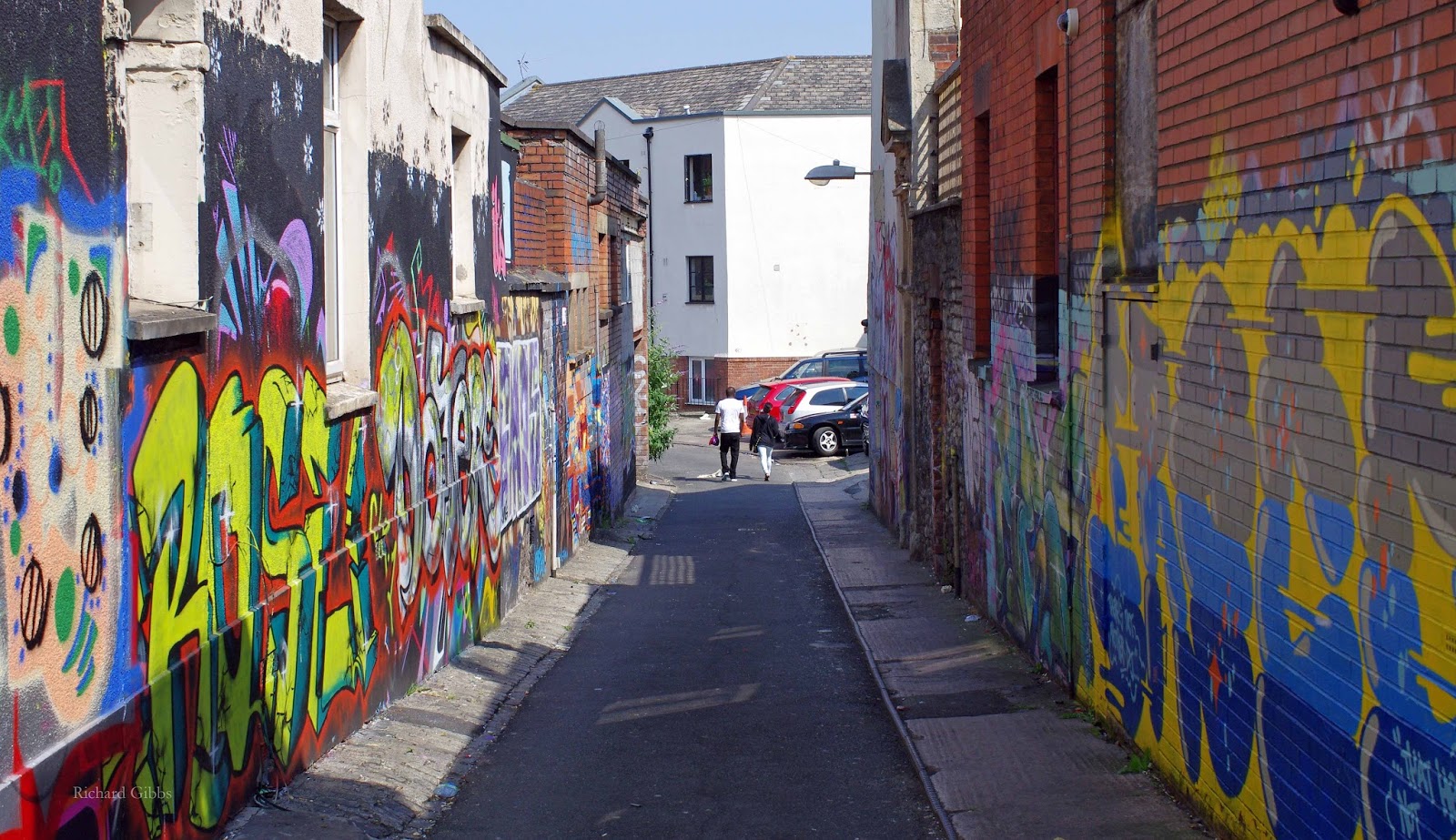 And on the way to St Paul's a gateway has been signed: 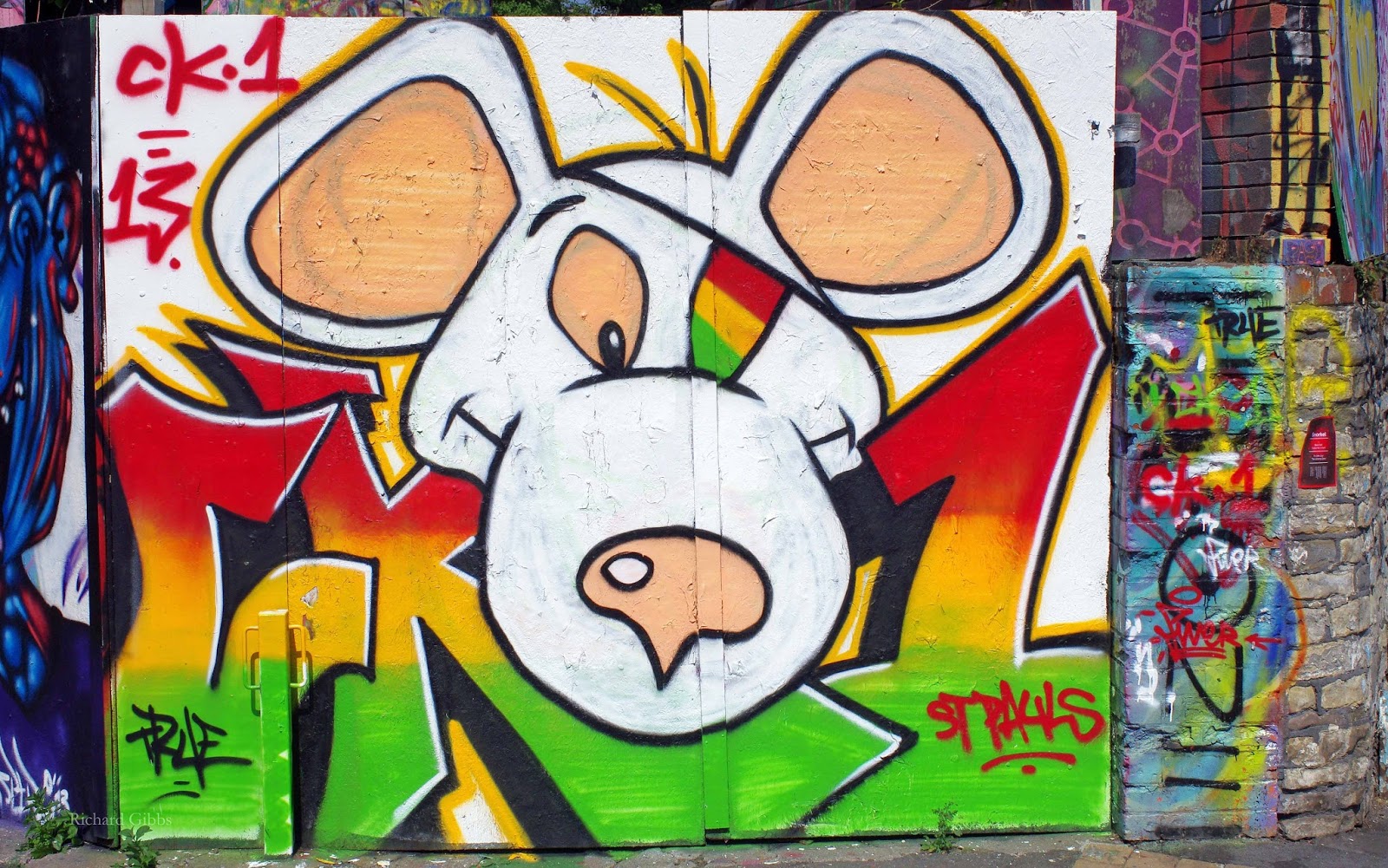 Most famous of these artists is Banksy, who was born in Bristol (in 1974) and who now banks megabucks for his authenticated work. He was involved in the Bristol Street Art explosion, has worked all over the world, but had a phenomenally successful exhibition at the Bristol Museum and Art Gallery in 2009.

One of his best known pieces is on the wall of a former clinic in Frogmore Street. This work, entitled "Well Hung Lover" went up in 2006, but was damaged by paintball shots in 2009.  Controversy then arose when Philth added his work at the foot of the wall. 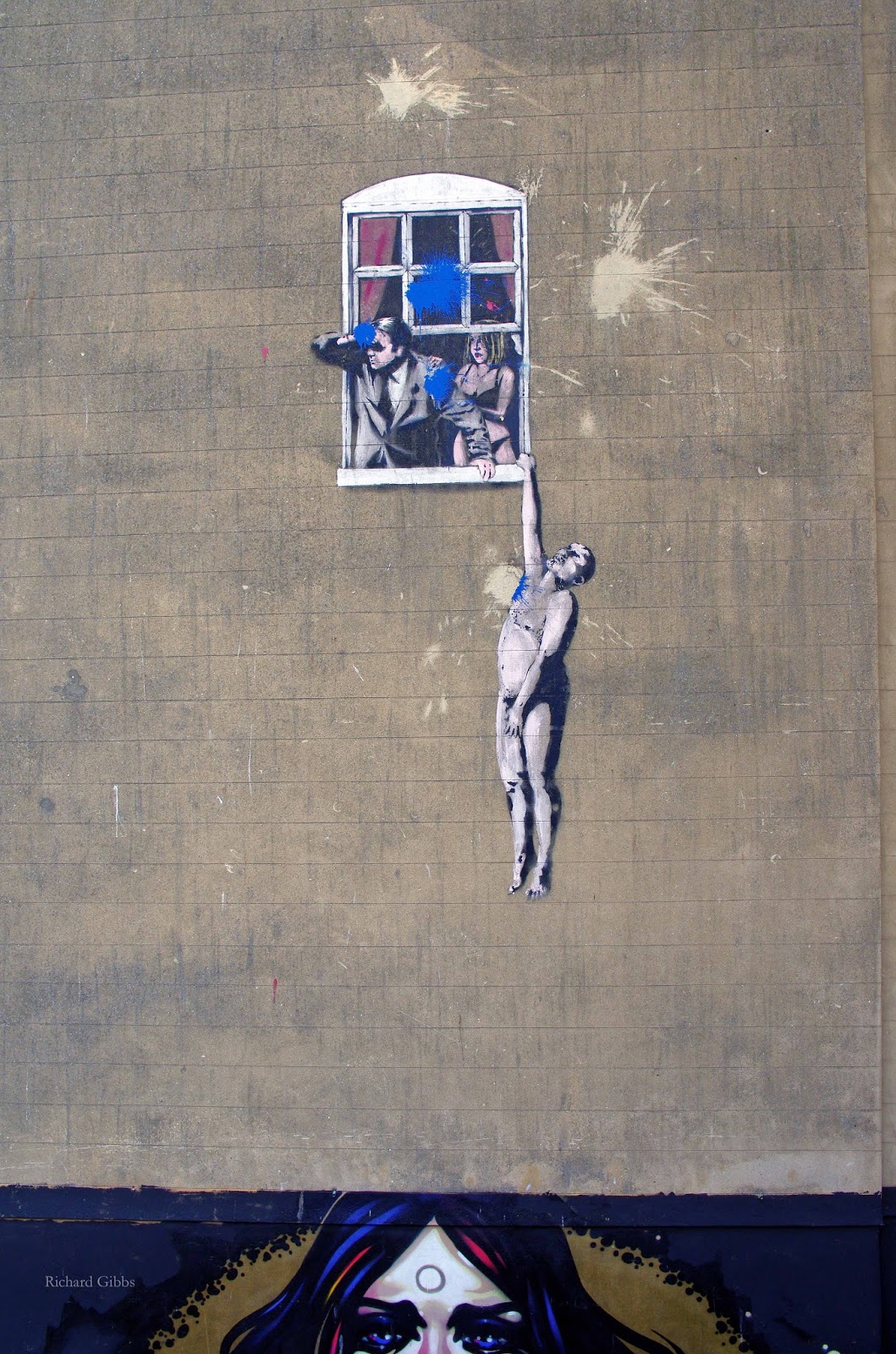 Bristol is a vibrant and imaginative place to be.  Almost all the pictures in this and my two other posts on Bristol, were taken within 24hrs earlier this month.  The city is relatively compact, so I walked everywhere, and all the art was on display for free.  From the Normans to Inkie, there is a huge span of ideas and purposes, but the arc of the rainbow has crocks of gold at either end. My pictures do not do justice to the range and quality that is on display, nor to the dimensions to be experienced in person.  Go see for yourselves!