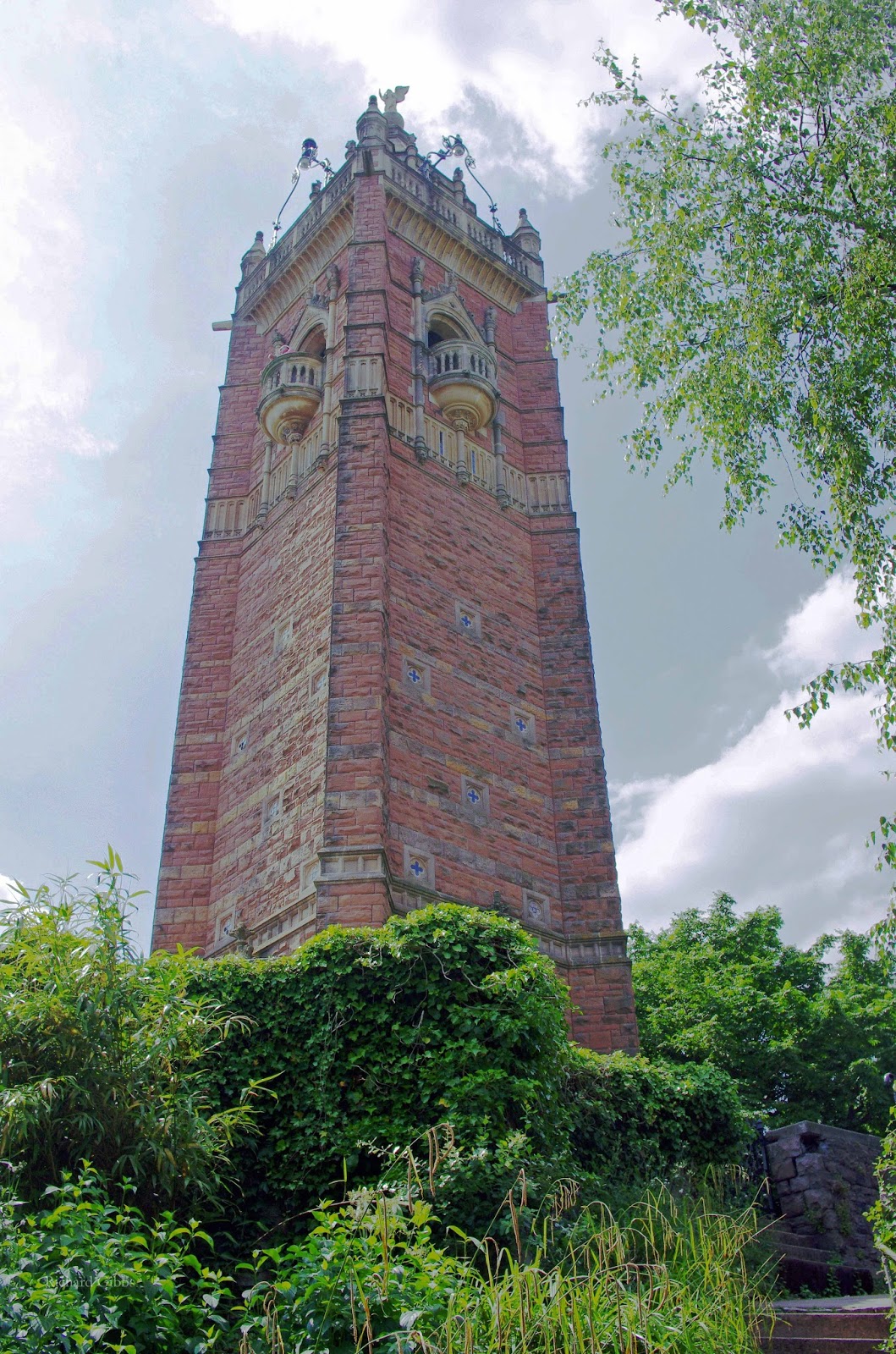 The Cabot Tower, on Brandon Hill, overlooks Bristol with its upper viewing platform at just over 100 metres above sea level.  At its base, there are three plaques which include the following:

'Glory to God in the highest and on Earth, peace, good will towards men' Luke 2.14"

"This tower was erected by public subscription in the 61st year of the reign of Queen Victoria to commemorate the fourth centenary of the discovery of the continent of North America, on the 24th of June 1497, by John Cabot.

Who sailed from this port in the Bristol ship Matthew, with a Bristol crew, under letters patent granted by King Henry VII to that navigator and his sons Lewis, Sebastian and Sanctus"

And at the top there are brass plates indicating directions and distances to significant places on the globe.


But looking in that general direction, you see City Hall, the Cathedral, and the spire of St Mary Redcliffe....  So it was good that John Cabot looked the other way!  None of this however would have appeared like this at the end of the fifteenth century, hard as we may try to imagine this. 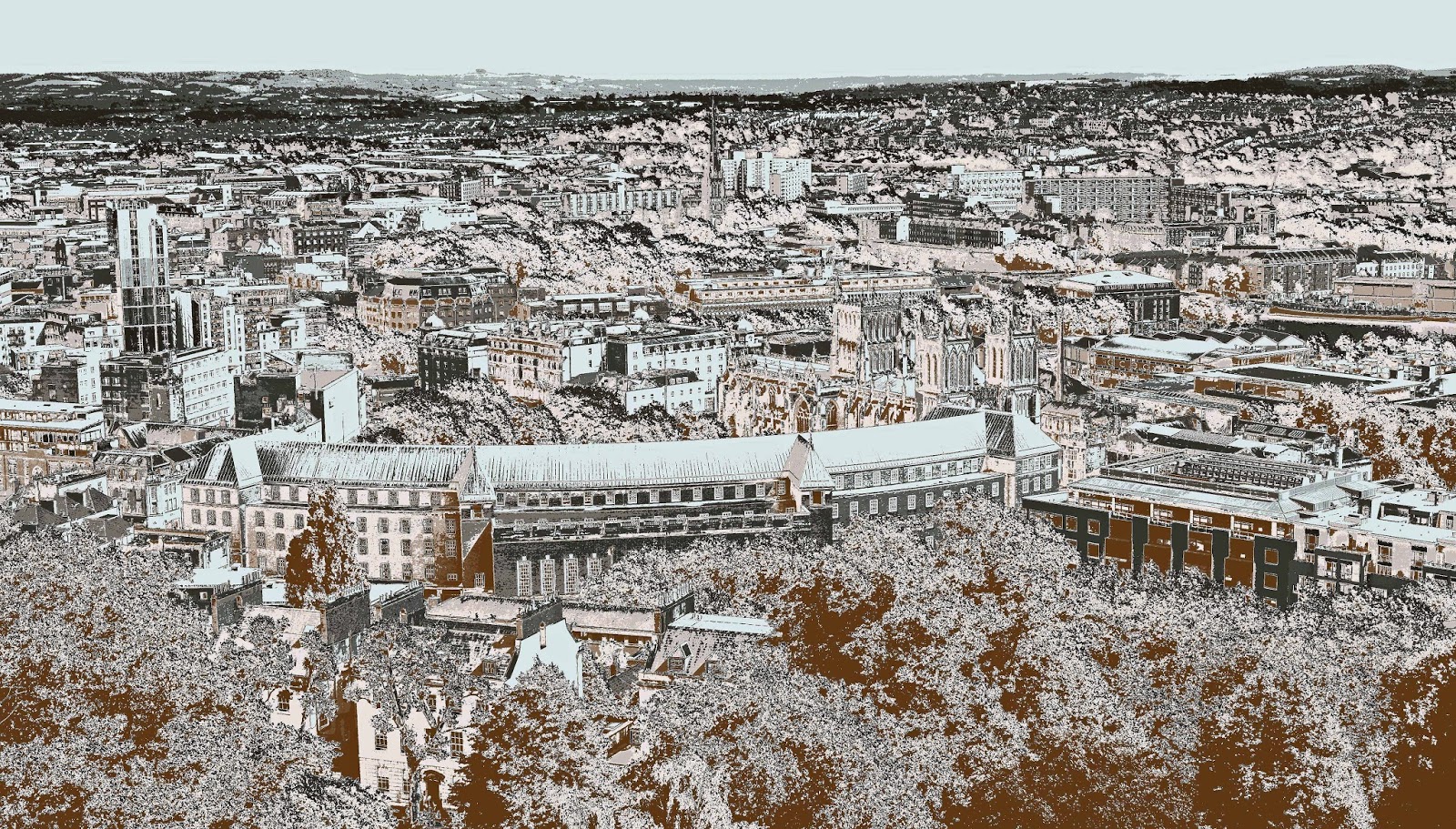 Human activity in this area can be traced back 60,000 years, but later the Romans were more preoccupied with the hot waters of Bath and only had a small port on the Avon at Abona (Sea Mills).  It was not until about one thousand years ago that the Saxons founded Brycgstow (or Brigstowe) which means the place by the bridge (the "ow" becoming "ol" with local pronunciation).  Fairly quickly after that the Normans built a substantial Castle (of which hardly anything remains) then in the early twelfth century the Benedictine Priory of St James was founded and soon after came St Augustine's Abbey (which is now the Cathedral).

But the real expansion and power of Bristol came at the end of the 15th Century when John Cabot and his boys set sail for the west in their little bark, The Matthew.

All this depended on water, and water that connected with the open sea, and Bristol is seven miles from the Severn Estuary, so it is somewhat surprising that Bristol became not only one of the three major cities (with York and Norwich) after London, but actually the second port in the country.  And this is all thanks to the patient erosive activity of the River Avon over several billion years carving a gorge through the Clifton Down Limestone, so that tidal waters could float even the largest vessel in or away.

It took the genius of Isambard Kingdom Brunel to work out a way to stop this erosion going further in the 19th century by stapling the gorge together with his innovative suspension bridge, but by then it was too late, and the SS Great Britain was already rusting in the Falklands.... Or, from t'other side (au naturel): 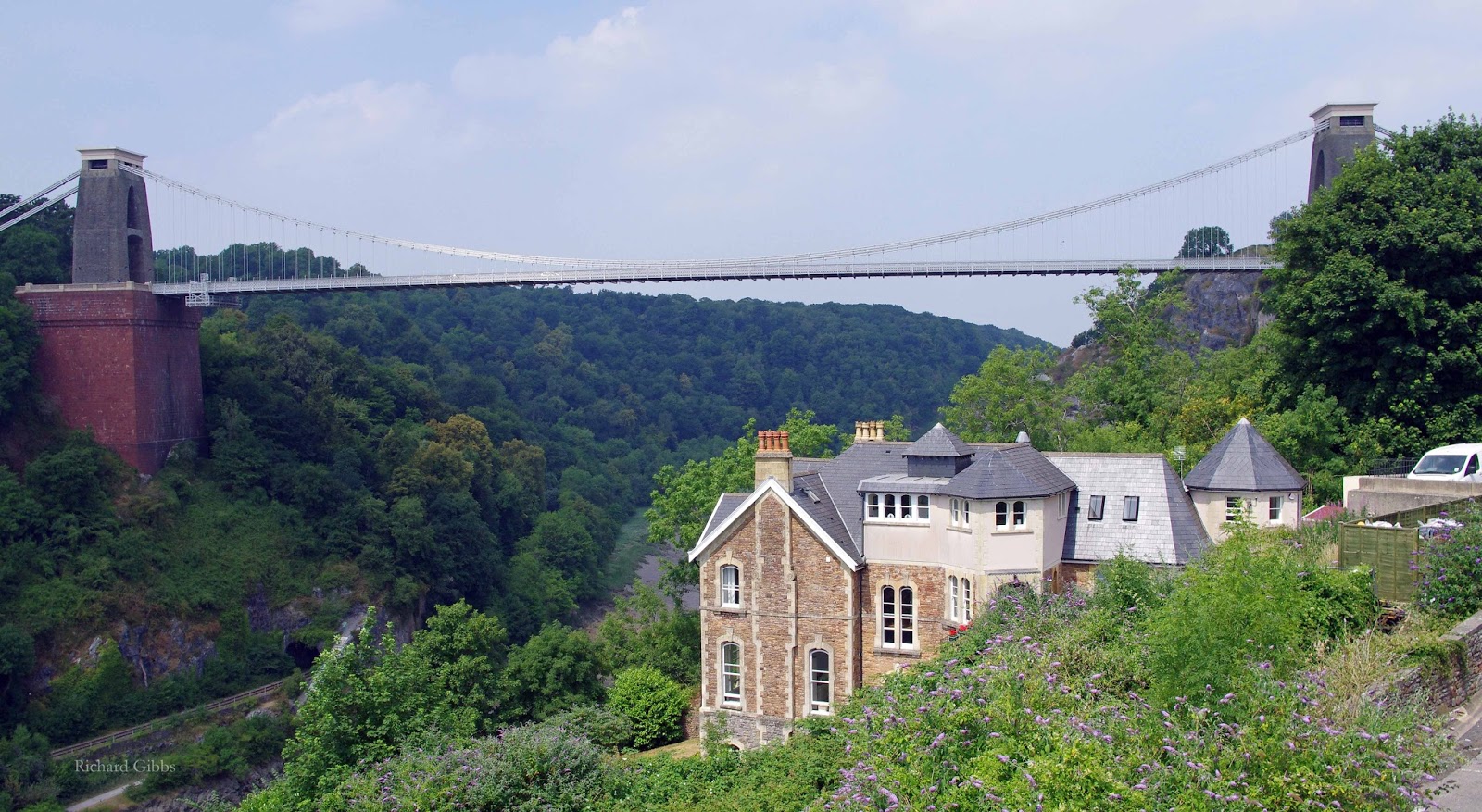 Yet lo and behold, yer t'is, back home, great emblem of the ways that the Victorians pushed against the probabilities.... 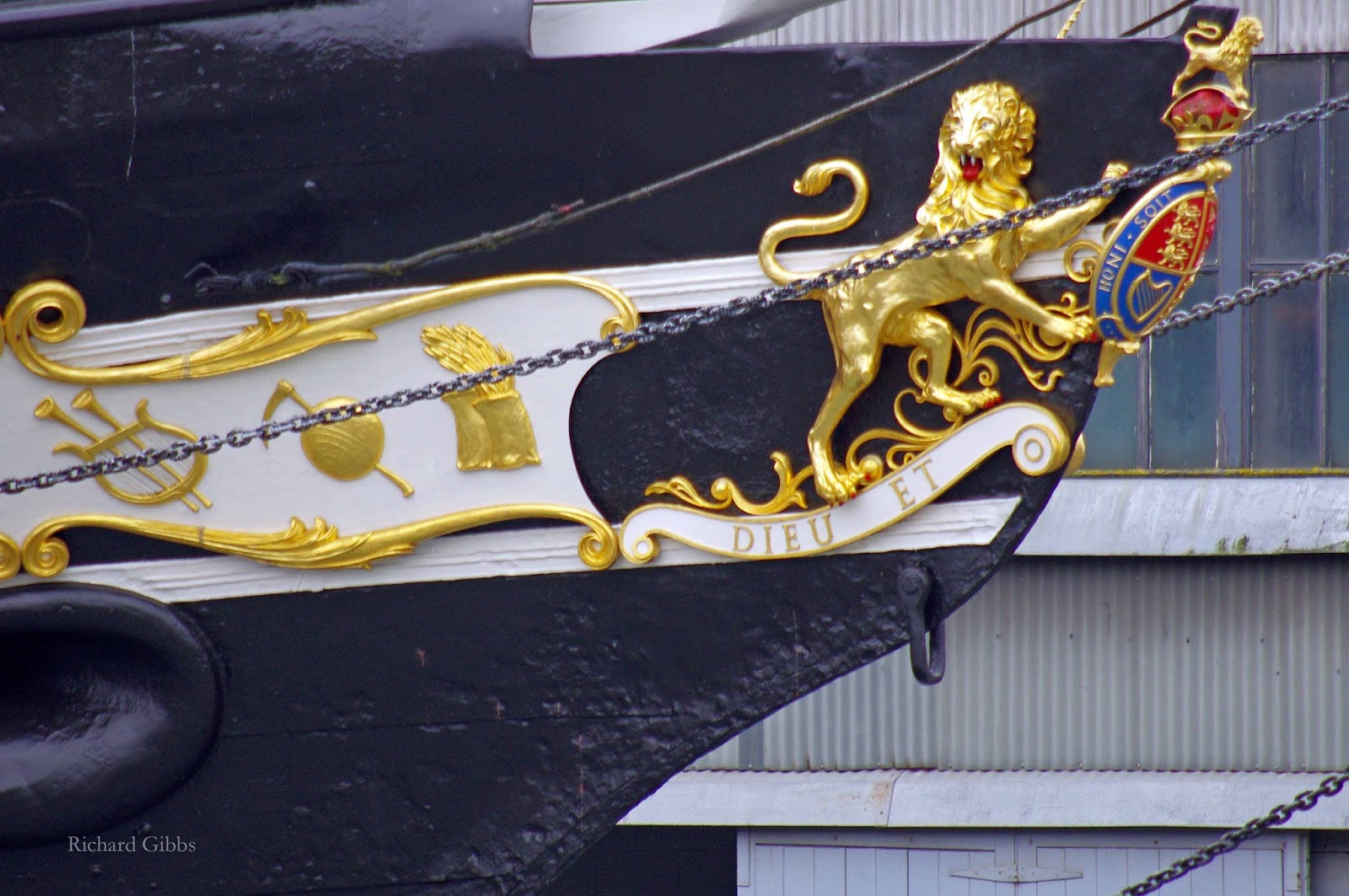 So, what does this add up to?  Not a great medieval centre, but a town that engineered its way (simply by digging out a basin for ships to dock and offload in) into the age of discovery, and then what?  Trade, of course. And in particular a trade that profited from sailing down to the west coast of Africa, then plying trade winds across to the Caribbean or eventually the southern states of North America, and returning fully loaded with sugar, tobacco, rum, etc.

And then there was the profitable trade in wines from Spain and Portugal, which brought success to the Harvey, and the Avery families.

And that of tobacco and chocolate from the West Indies that led to prominence of the Wills (whose Hartcliffe factory was the largest in Europe, closing in 1990) and Fry families (one hundred years ago the biggest employer in Bristol, and continuing in production at Keynsham until 2006).

Until the emergence of Liverpool, and the development of the Manchester Ship Canal, Bristol's supremacy as link point for Ireland and the New World was unchallenged, but then the changes came swiftly, and now model ships and historic cranes overlook the tame and domesticated floating harbour. 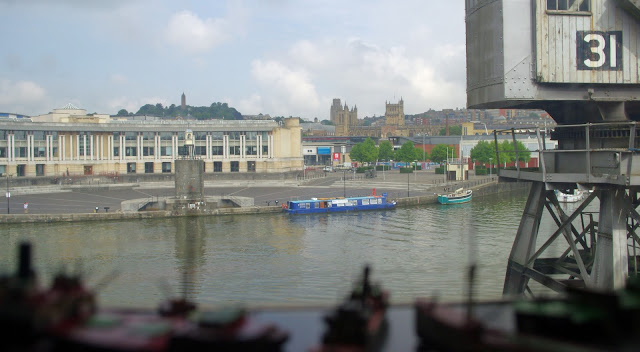 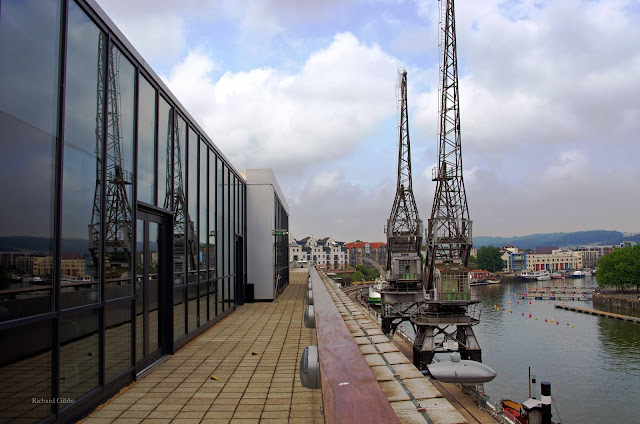 And The Balmoral, hospitality and exhibition ship, has to be towed and tugged to its moorings as the £50,000 to fuel her for a year just cannot be found. 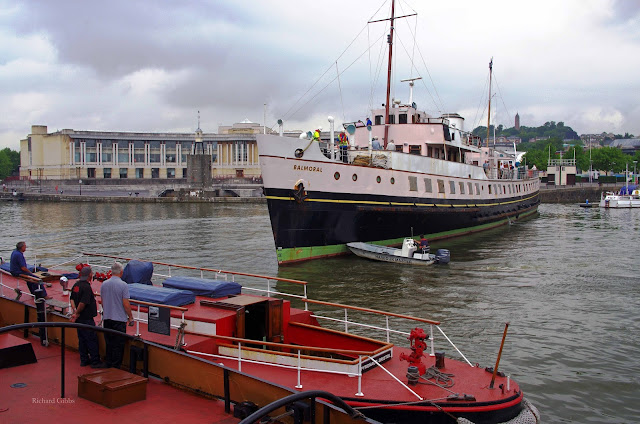 While new Bristolians sit and stare at the waters that brought the city life. 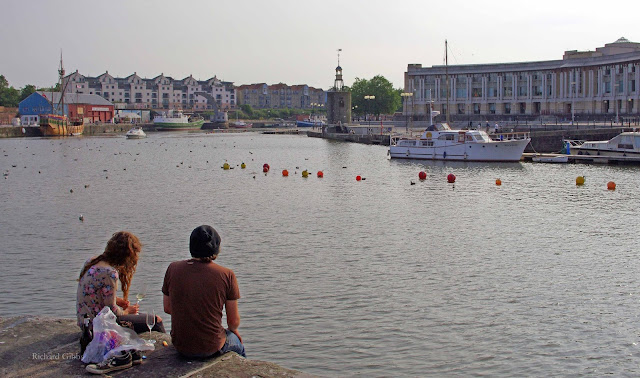 And Pero's Bridge spans the once thriving docks, until the Blitz still part of the busy maritime heart of the city.  Now the Watershed and the Arnolfini are arts centres and bars, which are often awash with students and visitors, carousing late into the recessional nights.

So what was Bristol?  Once a great port, and hub of engineering progress with steam trains entering on one side and steam ships exiting on the other. Now a great city? Why? Because slavery gave rise to philanthropy? Because commerce begat education? Because great wines caused great debates?

One of the anomalies of the destruction of war is that some of the buildings that survived are public houses, perhaps of ill repute, but reminders of the vernacular architecture of long ago, when seamen wasted themselves but exchanged an exoticism of culture that developed a particular attitude to life that perhaps survives in this stranded city of the sea?

And then there was the benefaction that perhaps came from maturing consciences, where dealing in human traffic or dangerous imports led to enormous wealth. Hospitals, almshouses, schools, public buildings, all benefited:

Though it should never be imagined that this is an elite place.  Mistakes are made, and freedom of expression is exercised. The 433,000 inhabitants make the most of their opportunities, and while the docks have moved to Portishead and Avonmouth, the university has offspring in the UWE, the schools are co-educational, the aerospace, creative and electronic industries have supplanted shipping, and the Tobacco Factory (once Imperial Tobacco's home) in Bedminster is now a vibrant arts complex and theatre. Even derelict buildings have been given a sort of life: 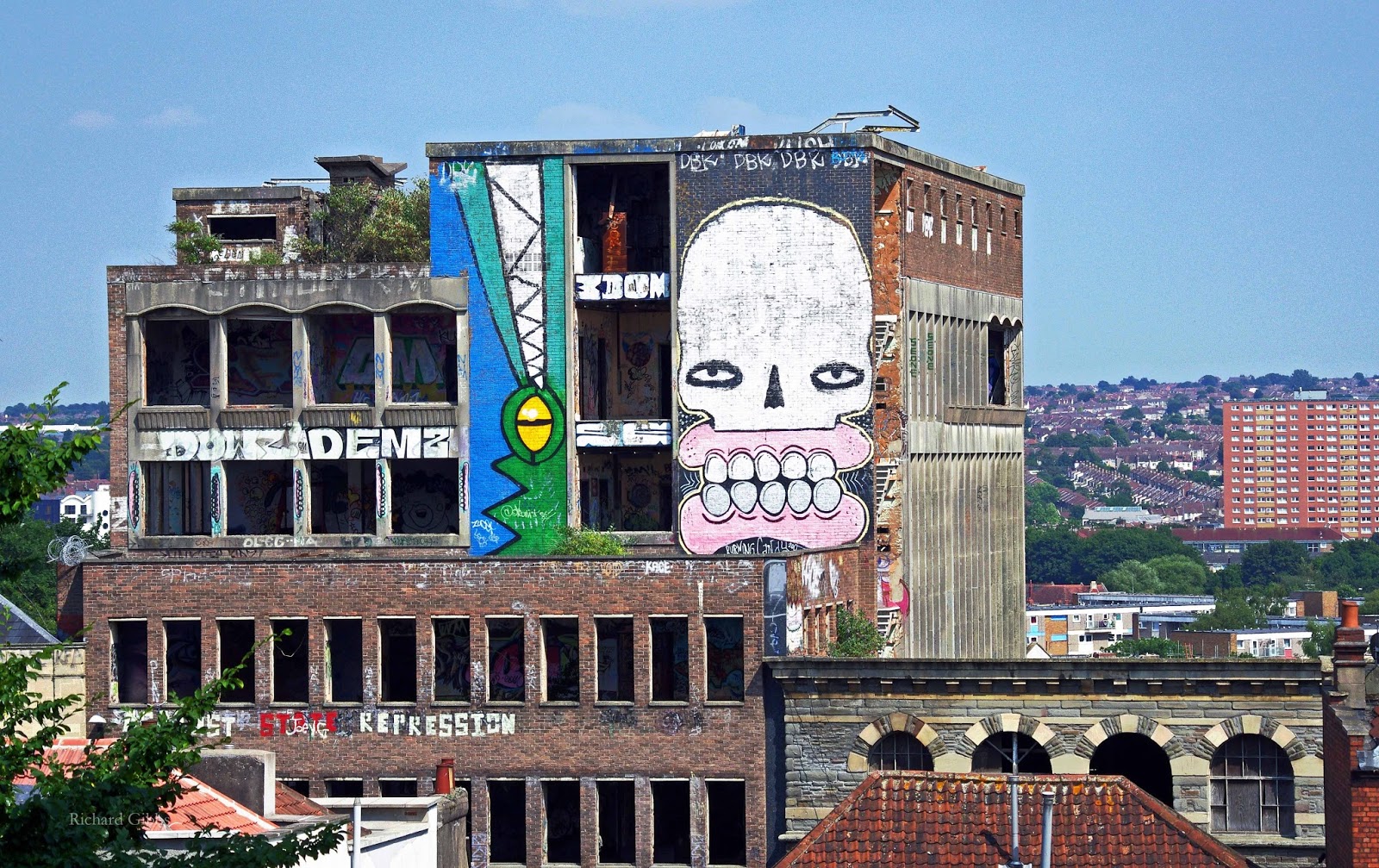 And Park Street can be seen to lead uphill in a kindly light:

Grand buildings aplenty have survived to allow the visitor to imagine how t'were: 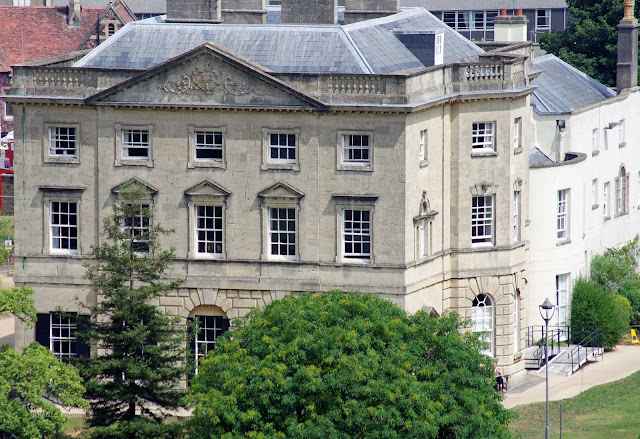 And with the regeneration of the dock areas have come some imaginative developments such as the @Bristol complex and the Imaginarium, which reflects something of the past, something of the future: 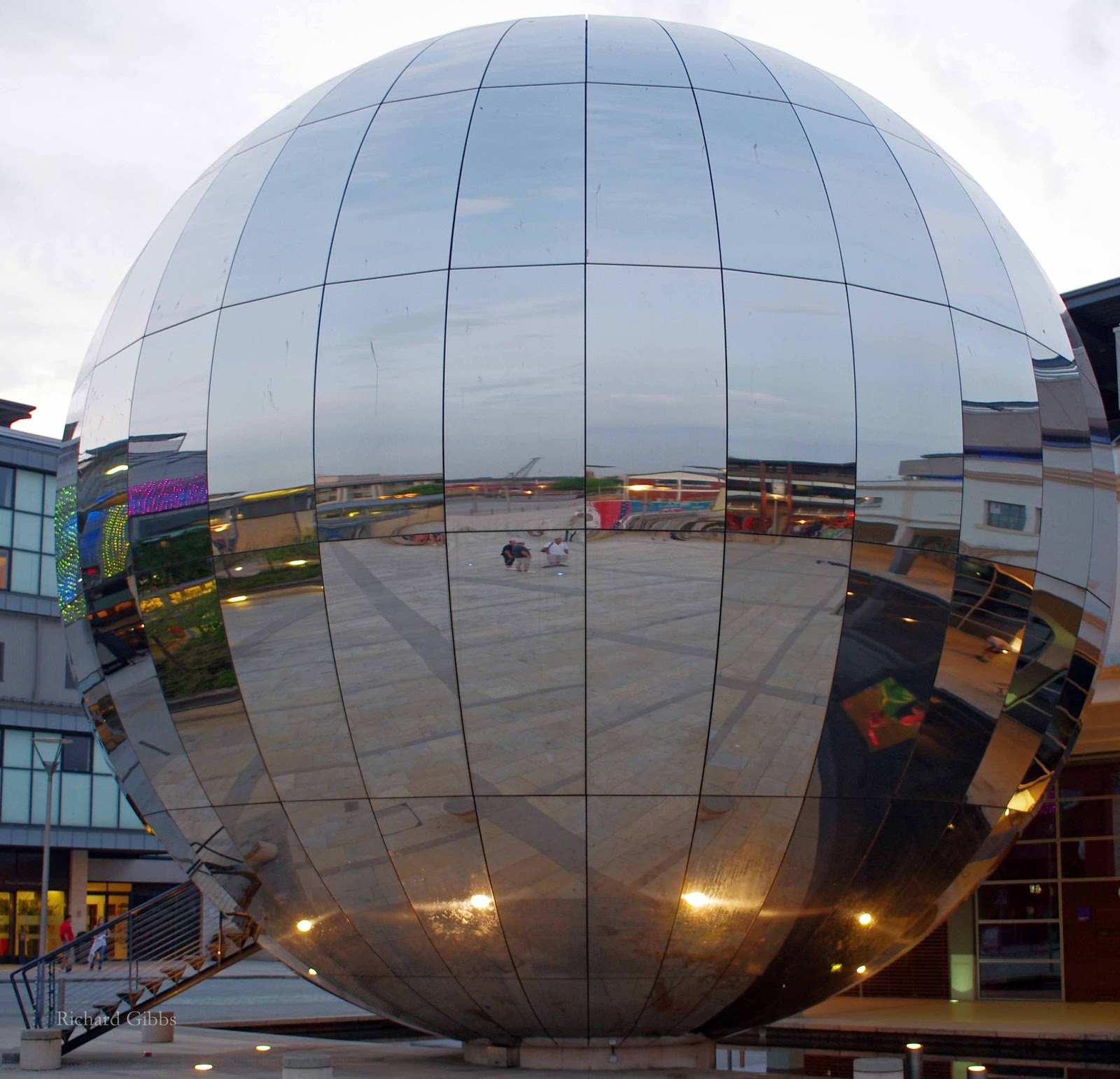 And there are always viewpoints, such as the Cabot Tower, from where the panorama of a busy city can be endlessly stimulating, an overview of life now, life then, and the life to come.....

Bristol and Its Adjoining Counties: published for the British Association for the Advancement of Science by the Local Executive Committee, Bristol 1955