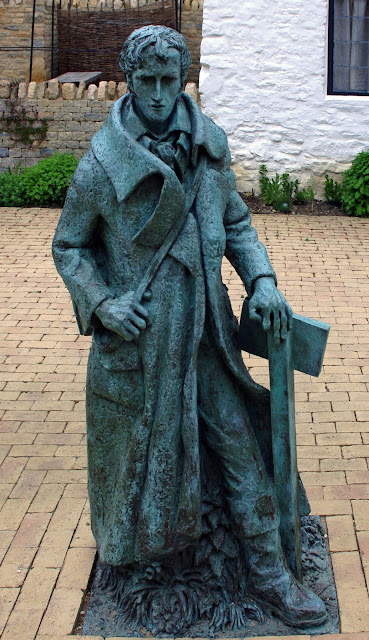 I am: yet what I am none cares or knows,
My friends forsake me like a memory lost;
…..

I long for scenes where man has never trod;
A place where woman never smil'd or wept;
There to abide with my creator, God,
And sleep as I in childhood sweetly slept:
Untroubling and untroubled where I lie;
The grass below--above the vaulted sky.
These lines were written in the last period of John Clare’s life, when, for twenty-two and a half years before his death at the age of 71, he was enclosed in the Northampton General Lunatic Asylum.

Clare was an immensely productive writer, whose fortunes have waxed and waned.  He was for a time a highly praised poet with the same publisher as Keats, but his rural background and lack of sophistication did not help him up the ladder of fame and his health and behaviour became unstable.

His best known works tend to be the observational writings that celebrate the Northamptonshire countryside he knew so intimately, with the birds, in particular, that he patiently watched when not working as a labourer.

All nature has a feeling

All nature has a feeling: woods, fields, brooks
Are life eternal: and in silence they
Speak happiness beyond the reach of books;
There's nothing mortal in them; their decay
Is the green life of change; to pass away
And come again in blooms revivified.
Its birth was heaven, eternal it its stay,
And with the sun and moon shall still abide
Beneath their day and night and heaven wide.

As Adam Foulds wrote in the Guardian in 2009, Clare is “Our great poet of the present tense…..  His poems connect things by seeing them, un hierarchically, one after the other.”  His language is the natural language of his place and time, with dialect words and common spellings used unselfconsciously:

The wild duck startles like a sudden thought,
And heron slow as if it might be caught.
The flopping crows on weary wings go by
And grey beard jackdaws noising as they fly.
The crowds of starnels whizz and hurry by,
And darken like a clod the evening sky.
The larks like thunder rise and suthy round,
Then drop and nestle in the stubble ground.
The wild swan hurries hight and noises loud
With white neck peering to the evening clowd.
The weary rooks to distant woods are gone.
With lengths of tail the magpie winnows on
To neighbouring tree, and leaves the distant crow
While small birds nestle in the edge below.

He was also the most sensitive and patient observer, working almost like a wildlife photographer will in this more technical age.  In The Nightingale’s Nest, for example, he tells of:

Creeping on hands and knees through matted thorn
To find her nest, and see her feed her young…..
And where those crimping fern-leaves ramp among
The hazel’s under boughs, I’ve nestled down,
And watched her while she sung ;

And then he writes of the “curious” nest itself:

no other bird
Uses such loose materials, or weaves
Its dwelling in such spots : dead oaken leaves
Are placed without, and velvet moss within,
And little scraps of grass, and, scant and spare,
What scarcely seem materials, down and hair …..

Deep adown,
The nest is made a hermit’s mossy cell.
Snug lie her curious eggs in number five,
Of deadened green, or rather olive brown ;
And the old prickly thorn-bush guards them well.
So here we’ll leave them, still unknown to wrong,
As the old woodland’s legacy of song.

Adam Foulds points out how, “the sharp, knowledgeable eye and the whole reacting person are integrated and inseparable.  It is the fusion of these qualities,” writes Foulds, “that makes him both our greatest ecological poet and a great poet of the human condition.” 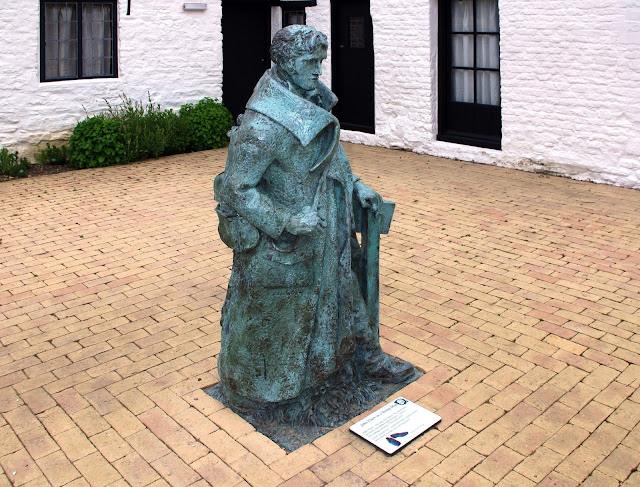 It is this interest in ecology, the study of the relationship between life forms and the natural environment, that perhaps singles Clare out as extraordinary.  But then the acts of enclosure which upset this balance for him drove him to despair.  Although it would be quite wrong to imagine that the appropriation of land was a new phenomenon (Romans and Normans had, amongst others, had their go at this before) the various acts between 1750 and 1860 took away some 20% of land from the ordinary people and changed the landscape for ever, with ditches, roads, rivers and hedges moved, uprooted or replanted.  What Clare had known as a boy, with his village of Helpston at the organic centre of a field system and common land that had been worked and grazed and played upon by generations, became in the space of some twenty years a very different world and this subject occupied him every bit as much as the delicate interiors of birds’ nests (very different kinds of enclosures).

In The Lament for Swordy Well he imagines he is the land itself:

There was a time my bit of ground
Made freemen of the slave
The ass no pinard dare to pound
When I his supper gave
The gipseys camp was not afraid
I made his dwelling free
Till vile enclousure came and made
A parish slave of me…..

And in The Mores he describes the landscape as he fondly remembers it:

Far spread the moorey ground a level scene
Bespread with rush and one eternal green
That never felt the rage of blundering plough
Though centurys wreathed spring's blossoms on its brow
Still meeting plains that stretched them far away
In uncheckt shadows of green brown, and grey
Unbounded freedom ruled the wandering scene
Nor fence of ownership crept in between
To hide the prospect of the following eye
Its only bondage was the circling sky
One mighty flat undwarfed by bush and tree
Spread its faint shadow of immensity
And lost itself, which seemed to eke its bounds
In the blue mist the horizon's edge surrounds…..

Now this sweet vision of my boyish hours
Free as spring clouds and wild as summer flowers
Is faded all - a hope that blossomed free,
And hath been once, no more shall ever be
Inclosure came and trampled on the grave
Of labour's rights and left the poor a slave
And memory's pride ere want to wealth did bow
Is both the shadow and the substance now……

And in another anti-enclosure poem, Remembrances, he recalls:

and then contrasts it with the present state:

In a paper for The John Clare Society Journal (Number 28, July 2009) Ian Waites identifies this very view in a pen and wash picture by Peter Tillemans, a Flemish Artist, who was commissioned in 1719 to provide a set of topographical drawings for a proposed history of Northamptonshire.  It may not be a particularly remarkable landscape, but the rise and fall of the land even in miniature, and the growth of trees and shrubs, have a lasting effect, especially by their absence, and Clare uses this to symbolise the much greater loss.  Of course we remember things not as they were but as they seemed, and part of Clare’s process illustrates the enclosed nature of the memory, retreating into the past as the poet grew older.  As Ian Waites puts it in reference to the discovery of Tilleman’s drawing of the land around  Langley Bush:  "For the first time, we have an authentic visual reference point of Helpston’s open fields for us to gaze upon and further empathise with Clare’s situation and his poetry, and to contemplate while considering the visual nature of his work. From this small sketch we can see exactly what Clare saw in those youthful years before ‘the enclosures came’ – the heath, the bush itself, those ‘grasses that never knew a scythe’, the ‘unbounded freedom’ that he felt under ‘nature’s wide and common sky’ – and it shows just how Clare’s senses were finely attuned to this landscape. For all the critical analysis – of how Clare struggles in balancing his personal grief with that felt by the landscape after enclosure, or of the anomalies in his comprehension and retelling of the changes brought about by enclosure – his identity as a poet was formed both by places like Langley Bush, and by his memory of such a place."

It is ironic that the last third, almost, of his life was spent enclosed in an institution, where his memories and confusions became all he had.  But then his earlier life had also been enclosed, both in the life of a young labourer and in the confines of his family cottage in Helpston.  It is also ironic that the developments in more recent times, with pylons striding like giants across a yellow land of rape, and the tarmac and the housing, have probably done more hurt to the eye than the enclosures ever did (though perhaps ownership remains a bigger issue?)

In To a Fallen Elm, Clare directly addresses the tree that, “murmured in our chimney top/the sweetest anthem autumn ever made:”

Thou ownd a language by which hearts are stirred
Deeper than by the attribute of words
Thine spoke a feeling known in every tongue
Language of pity and the force of wrong
What cant assumes what hypocrites may dare
Speaks home to truth and shows it what they are
I see a picture that thy fate displays
And learn a lesson from thy destiny…..

His appreciation is sincere, his feeling of kinship with the tree no shallow sympathy.  He knows it both supports an ecosystem and symbolises past freedoms, but “Self interest saw thee stand in freedoms ways,” and so, “With axe at root he felled thee to the ground.”  As Richard Mabey wrote in 2003 in an article entitled Nature’s Voyeurs in The Guardian, “Clare is not a presenter of nature.  He is a re-presenter, a representative.  He never shows facile ‘identification’ with another creature, but rather a kind of solidarity, as a fellow commoner.  At the very point where the act of writing distances him from the natural world, he joins it again, in the special niche of the ecological minstrel, winging the songs of the silent majority for them.”

Then what is Life? When stripped of its disguise,
A thing to be desired it cannot be;
Since everything that meets our foolish eyes
Gives proof sufficient of its vanity.
'Tis but a trial all must undergo,
To teach unthankful mortals how to prize
That happiness vain man's denied to know,
Until he's called to claim it in the skies.

But the mist retreating from the morning sun, the bubble on the stream, are images he could, and did, share with us.  Helpston today is not what it was when first he saw the light of day, nor what it was when they brought him back and laid him out in the Exeter Arms before his funeral, but the busy, bustling, still-repeated dream that is life does endure, and with Clare’s help perhaps we are better placed to understand the cobwebs and the thorns.

The Song of the Earth - Jonathan Bate (Picador)

Everywhere an exile, Adam Foulds, The Guardian, Saturday 23 May, 2009