The Isle of Purbeck - Worth Matravers 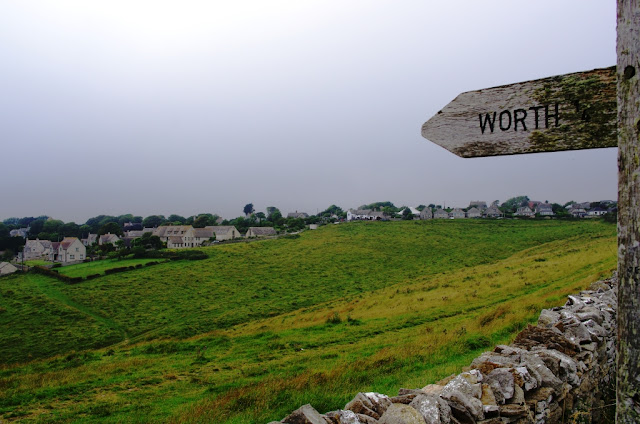 To be frank, Worth Matravers is not what it was..... but what's new?  I have known the village for over half a century, and have returned again and again, not because of any links with the inhabitants, but because of its feel, its location, my own memories, and, perhaps, its pub.  As a child I played in the duckpond, having water fights with other children staying, or living, here.  We walked down to Winspit, wary of the cows, frightened of the dark recesses of the quarries, and terrified of the slippery rocks and sucking waters.  We spent our days on Studland beach, where the wind whipped sand into the sandwiches while the commandoes practised with their landing craft.

Even fifty years ago, although there was still a great deal of quarrying and masonry in the area, Worth had probably already lost its identity.  It was, and is, a characterful and harmonious village; its position within sight of the Channel, within touch of strip lynchets, the terraces of early man's agriculture, is both elevating and intimate.  Now the lynch pins of the community, since the demise of the post office and village shop, are the Church of St Nicholas and the Square and Compass pub, defended by the same family (the Newmans) for well over a century, and defiant in its absolutely immaculate old world charm.  But no one quite knows how many houses are second homes, and certainly visitors outnumber residents throughout the summer (?) months.

The best reason to visit however is that from the car park you can take a number of walks which either take you onto the Jurassic Coast, literally in the foot steps of the dinosaurs, or across the Isle of Purbeck to the ruins of Corfe Castle, or to the sunny charms of seaside Swanage.

If you are a calloused and heavy duty walker, you probably arrive here towards the end of six weeks on the South Coast Path, but if you have not yet taken the luxury of early retirement you may be here for just a day or less.  So you need to venture out to St Alban's (aka St Aldhelm's) Head, past, or via if you have enough time and energy, Chapman's Pool, a horseshoe bay that would not look out of place on a Falkland Isle or perhaps in the Orkneys.  Seaweed and flat grey shingle abound here, and a few rusty corrugated iron shacks house fishing gear and secrets that it may be best not to know.

Walking here brings you close to the edge, literally, and exposed to the weather.  Most likely there will be a wind blowing off the sea, and quite possibly there will be mist or cloud or rain.  The dry stone walls offer little shelter, though sheep find them comforting when the squalls go mad, and local masons have recently added embellishments which recognise the elements. 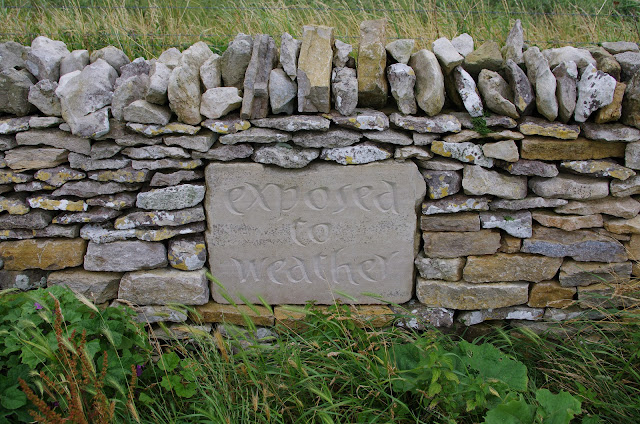 There are views along the Jurassic coast, looking West towards Devon and East to Durlston Head.  The rock in some spots is hard and valuable purbeck stone, durable limestone that was used to fortify this coast in the Napoleonic Wars, but has also been used for churches, bridges, scultpures and was also prized for Palladian Villas and city palaces up and down the land.  At other points the cliffs are crumbly and insecure, and rockfalls and mudslides are not uncommon.  In fact, on July 25th this year a 20-metre stretch of the south-west coast path gave way and an estimated 400 tonnes of mud and rock fell from the top of the cliff on to the beach at Burton Bradstock, killing 22 year old Charlotte Blackman. 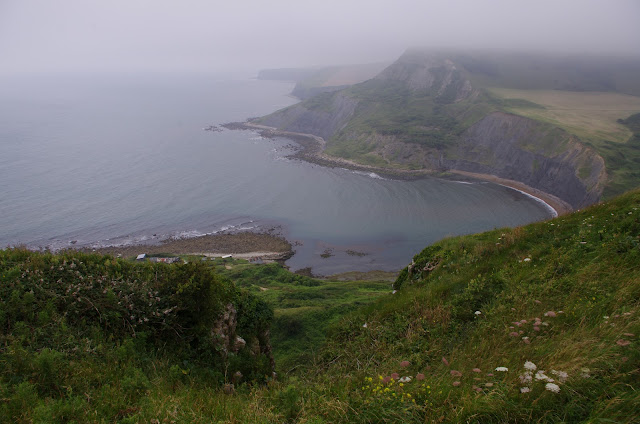 Even if the visibility is not great, the feeling of remoteness is strong and this perhaps works magic with the fossil finds that have been made along here, with ammonites and trilobites as common as garden snails, but traces of dinosaurs not being that rare.

The path dips and rises in a steeply stepped declivity, and then at 108 metres above sea level you come to a row of ex-coastguard cottages (now holiday lets) and the tiny (7.77m square), ancient St Aldhelm's Chapel.  When I first came here, it was dank and rank and had not been cared for for some time, but now there are regular services and a new Altar table, fashioned from local stone, was consecrated by Rowan Williams in July 2005 as part of the 1300th anniversary celebrations of the first Bishop of Sherborne, St Aldhelm, to whom the chapel is dedicated.  (In a corrupted version he also gave his name to the area, as St Alban's Head is derived from St Aldhelm.)  The existing structure is at least 800 years old, and may well have been built on an older religious site, though there is still some mystery about why a chapel was put in such an inhospitable place, and one theory is that it was used as a landmark for sailors, and had a beacon on the roof where there is now a cross. 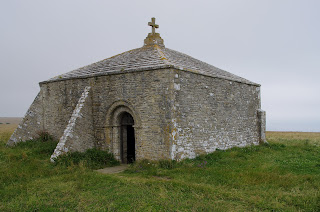 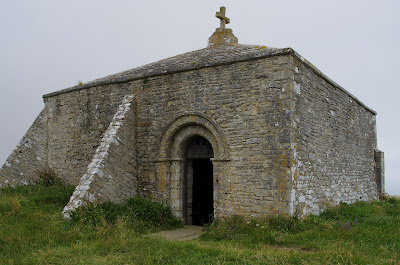 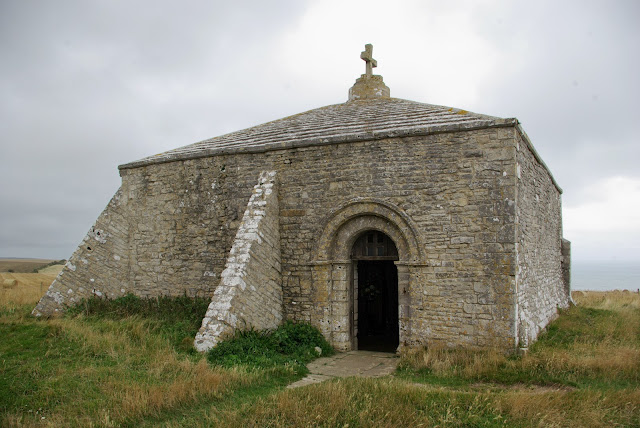 
Also on this headland there is what would seem to be a CoastGuard station, though it is in fact run by the National Coastwatch Institution (NCI http://www.nci.org.uk/) an entirely voluntary organisation keeping a visual watch along UK shores.  They currently have 46 stations and each one assists in the protection and preservation of life at sea and around the UK coastline.


And within a few paces of this, is a memorial to the wartime radar research scientists with a plaque which Sir Bernard Lovell (who died this week aged 98) unveiled on October 27th 2001, "in the presence of Dr. Bill Penley and the veteran scientists who worked here during the war." 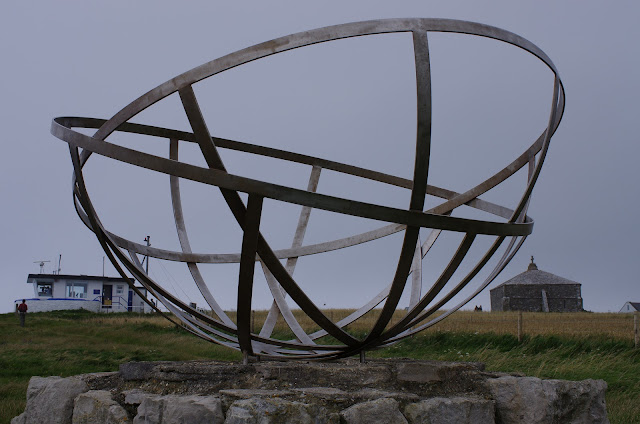 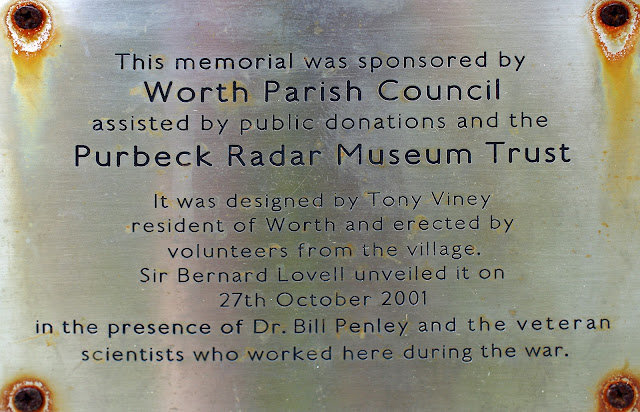 From here the coastal path gently slips down towards Winspit, close to the edge, and patrolled by gulls.  Then suddenly a great shape looms up and blocks the sun for a moment - an eagel?  A roc?  The gulls are furious and I grab for my camera.  No time to fit a telephoto lens I fire at the shape as it glides past.  What was it?  The standard lens seems to hold no clue, But, with the miracle of modern digital technology, we can actually see the brute: a Great Skua. 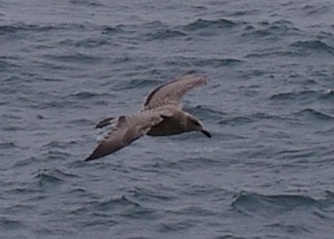 On the shore side there plenty of other birds, and skylarks twitter at me tempting my digital expertise, so here's one I caught with a beakful! 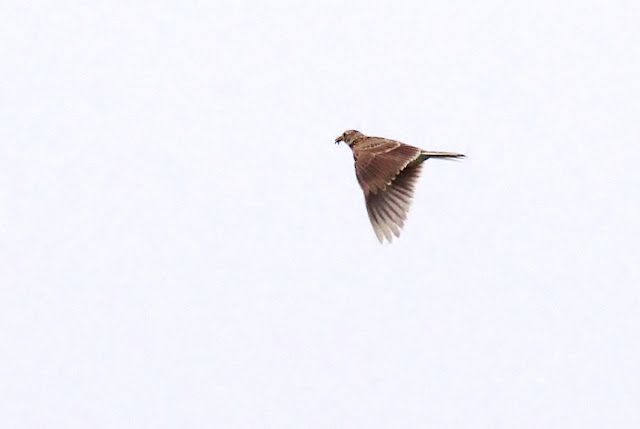 In the meantime, the humble Dunnock poses quite nicely for me, fluffing a little in the wind: 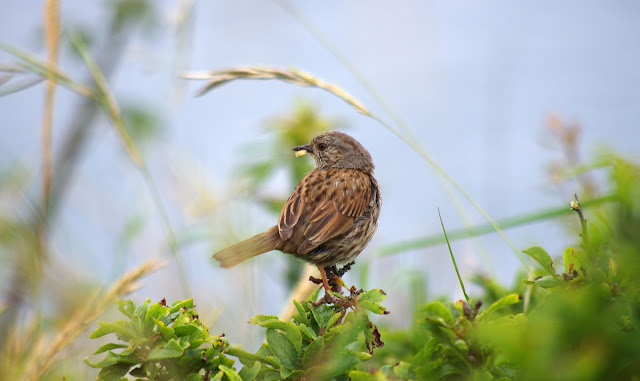 Another natural pleasure here lies in the proliferation of wild flowers.  Some of the land is owned by the National Trust, who have carefully controlled the grazing to enable native species to thrive. 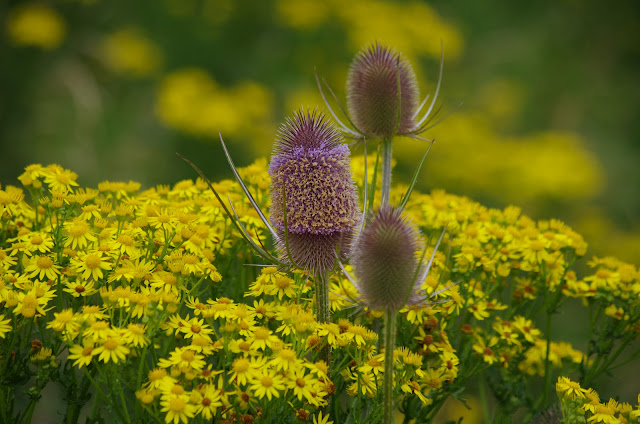 Winspit Quarries, on the Jurassic Coast

The water at Winspit 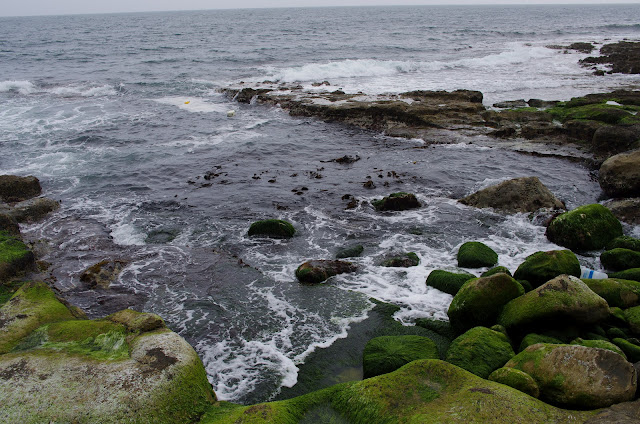 This rocky and inhospitable cove was once busy with quarry work and I can remember blasting when I was a kid.  Now the workings are left to incautious wild campers and the erosions of time.  But the rocks and the water continue their symphony in the endless ebb and flow of land and sea, swishing and sucking and splashing and smacking in a mesmerising antidote to the motorways and offices of our daily bread. 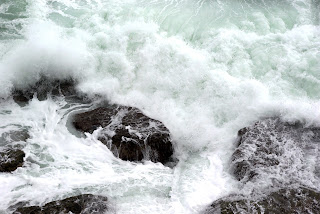 The Square and Compass pub
Worth Matravers

When my family first came to Worth Matravers for a summer holiday (we stayed in Gulliver's Cottage, just by the duck pond) over half a century ago my parents would occasionally slip up to the pub.  In those days children never entered, so many years passed before I got inside, but one of the great things is that really nothing much has changed.  One well known habitue of this inn was the painter Augustus John, who first frequented it before the First World War, but who was still around into the second half of the twentieth century (he died on October 31st 1961) and who may well have been there when I was a boy and who would still feel at home if he were to wander back.

My dad was here before being posted to North Africa in 1943, as RAF Worth Matravers was a centre of radar research (as commemorated at St Albans Head) as he specialised in radar in the RAF in the Egypt and then Italy through 1944 and 1945, so he came here for briefing.  The sign for RAF Worth Matravers now hangs in the pub, but it's too late to reminisce with my dad.


Apart from the addition of the fossil museum, the pub still operates from a hatch and has two rooms.  Beer, and cider, is dispensed by gravity, the only food served is pie or pasty, and there is a long tradition of folk music performances.  It can be busy at times, with quite a lot of children, but there is also an ongoing Augustus John lookalike competition amongst local moustache wearers, and in the quieter hours it is timeless and peaceful - a place for contemplation and the near forgotten art of conversation. 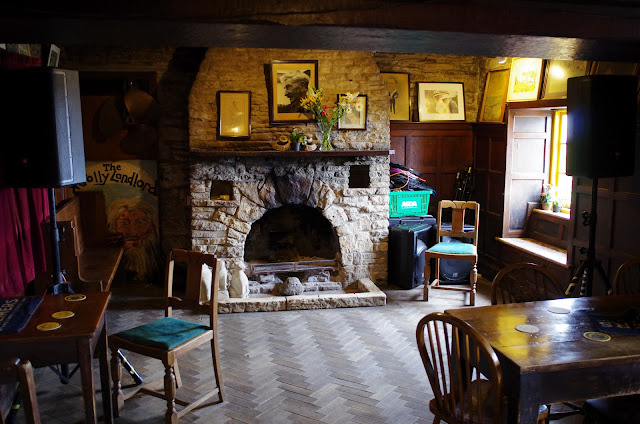 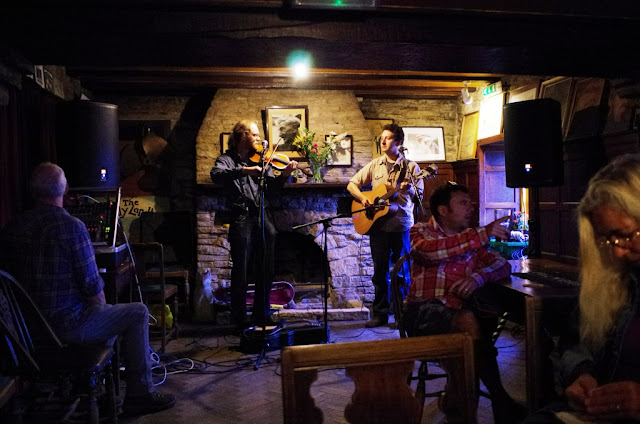 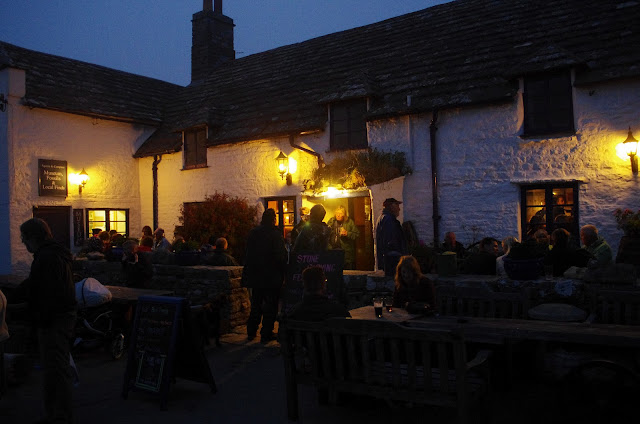 As I said, Worth Matravers is not what it was.  It might have been at its very best about 180 million years ago when peace-loving dinosaurs picknicked on the unspoilt coastline, or nestled in the folds of Seacombe bottom.  But then Worth Matravers is actually what it is, which is a place of harmony between man and the environment, where stone has been cut from the ground and piled into attractive and purposeful buildings, where walls protect and shelter animal and plant life, and where the casual visitor can exercise in the freshest of air and then rest and socialise in a near perfect public house, well worth the designation "World Heritage Site!"