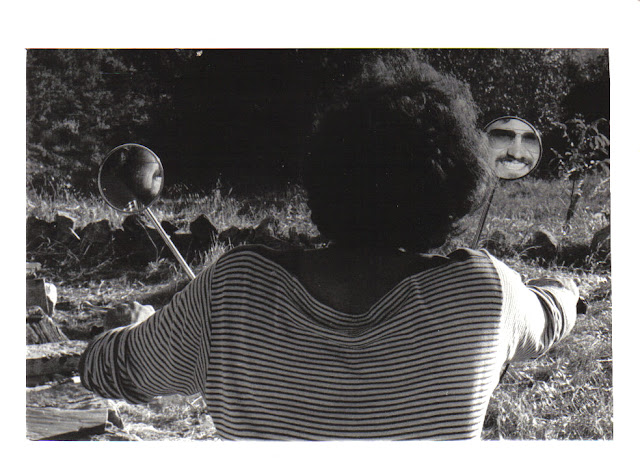 It was a perfect day.  The machine was behaving well and the sun gleamed through trees, shimmering and glinting, as I whipped along.  The road, smooth and reasonably wide, weaved up the hillside, leaving the lake behind me.  Chestnut trees gnarled in the wood, grasses switched in my slipstream.

As I breasted the hill I felt on top of the world, for a moment, king of the moment.  It was , it was a glorious summer day, and the road was all mine, with the aid of my Ducati 350.  One cylinder was enough for me, noisy but fun, powerful enough to pull up a hill and keep on going.

Then the down side, sweeping round the curves, leaning into the wind, and wheeling down and down.  But the road ran round and round to the left, too steep, too tight, and I couldn’t make it. Snap decision, quick as mercury, I knew it would hurt to slap down skidding on the hard surface, so I sat up, straightened out and headed into the void, straight off the edge, down into the soft bank and the green. 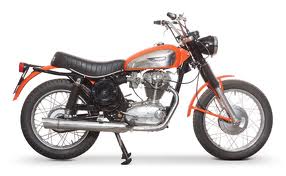 The Campo in .  Up high on the roof tops on a friend’s balcony, high above the cornfield crowds of passionate, effervescent, seething, molten people, fused together in the bleaching sun, cheering the flag-wavers, the rolling cart, the palio itself.  Heat shimmered up, both reflected radiation from the sun, and also the generated sweat power of hundreds of people pressed together in a compress of energy.  Ow!  There goes one!  And handed overhead another body is taken to the cooler, to miss the event in painful, solitary dehydration.

The race, as condemned as the Grand National, is Jack Dempsey to Jackie Pallo, the real thing to a thespian charade (no real disrespect, Jackie – you were a great comedian!).  A swelter of hyper horses career round this scallop shaped piazza three times at (literally) breakneck speed, the hooves pounding the temporary earth, the bare-back riders (professionals from far afield – none homeboys at all) whipping their steed and their rivals with vicious quoits, driving into the mattresses that cushion the sharpest turns.  It’s breathtaking and horrifying, bullfight blood tingling, and it’s all over in the time it takes a stallion to serve.

It should have taken me an hour to the farmhouse on Monte Amiata; an hour of steady roar and simple driving, but somehow the road eludes me and in a moment’s distraction at the steep road crossing at Montalcino sends be on a crazy loop which falls down to the Val d’Arbia from which I have to trek back up all the winding way to Castel del Piano and thence home.

And it is dark now.  Dense, inky dark, which would be outside a car, and which two headlamps might scare a little, but perched on the tank of my Ducati, peering through goggles like a frogman, the dark surrounds me, smothers me, blinds me and makes every turn an unknown, every bump or stone a leap of faith.

The only lights are those of passing cars, either from behind, momentarily helping me see where I am, or, dazzlingly from ahead, sometimes snarling at me from out of nowhere.  If only there was a moon, or even a few stars, but here in rough , on this particular summer night, there is no sign from the heavens, and less still from the civilised world.  I am on my own.  No streetlamp to comfort me, not even the slender gleam from a friendly window.  It is all intense concentration, a blindfolded nightmare in a link trainer that has become unleashed from its base.  At any moment I fear the judder of a collision, the bone-jarring crash of a solid object or the tearing graze of some startled animal, a wild boar, or porcupine.

I expect to fall, to trip, to skid.  As I work the clutch and gear changes, twisting the accelerator, wrangling the handle bars at each hairpin turn, I feel more and more like a jockey in that crazy race.  In the blackness I imagine I am fighting through the pack, whipping my opponents on either side, clutching the flanks tight with my knees, wrenching the head to make the turn before the inevitable thudding crash.

The crowd roars in my ears, I can hardly believe it, I am ahead, I am racing for the finish line, speeding recklessly forward, into the light and splendour of victory!  The piazza in Castel del Piano is in uproar!  I have survived.

Aching, bruised, exhausted, I limp up to my friend’s door, and knock.  No response.  I knock again, louder, concerned now that I might have to sleep out in the cold, but ashamed of having to wake them up at three a.m.  Another tentative, apologetic, very sore little knock.  The last one…..  A shutter is thrown open above.  “Che vuoi?”  “What the hell do you want?” 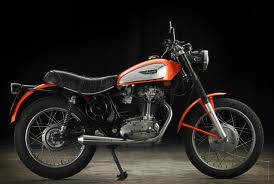 
It is mid August.  In Malcesine Elvis is dead.  Elvis is dead everywhere.  The world is in shock and I don’t help by waking the entire campsite with the shattering kick start the Ducati needs for a dawn departure.  An irate Tonino sleepily chastises me, but I charge through the gate before he can catch me.

It’s good to be on the road; I have miles to go before I sleep; all the way to…. ?  ?  How far can I get?  In the sparkling morning, I whizz south down the Eastern .  Tall, pencil thin cypresses standing to attention as I sputter past, a slightly unhealthy reek of oil burning in my wake.

Into the flatlands of the Po Valley.  Skirting , tempted by the lure of the apartments of the and the insular grandeur of the city, but anxious to get on south.  Then the bike starts to struggle, choking and coughing.   Perhaps it wanted to climb the equine stairs within the court of the Gonzaga, to rest in the frescoed splendour of Mantegna’s Camera degli Sposi, but  something is not right, for sure, and it seems to be dying under me.  “Come on, girl,” I urge, “Forza!”

But, oh, yes, she most certainly lacks the strength.  And, hiccough by hiccough she dies.  I falter to a stop on a long straight stretch of road, in a limitless plain, populated by vast farms, each one a lifetime from the next.  I look one way into an empty, flat, nothing.  I turn about and face the same. The morning has started to heat up, and the road glares, the fields shimmer.  And I know no one.  “Miserere di me!  Mi sono perduto!”  I exclaim to the vastness.  “Che faccio?”

Then, an apparition.  Out of the silent distance, a murmur arises, then a puttering sound and a little cloud of dust appears.  An ancient Vespa approaches, with a young lad astride, smiling like Virgil, and perfectly disposed to help the stranded stranger.  Within minutes we have fetched a tow rope from his home and are on our way, the whining Vespa tugging my silent, limping, abused Ducati with a rope around her forks.  It’s not long before we reach a garage where another angel fills the thirsty sump with rich black oil and pretty soon I am southbound again, leaving my two newfound friends behind, though I still carry their kindnesses with me after all these years, (and still smart at my foolishness…..)

Somehow I negotiate the traffic through the centre of , buffeted by the slipstreams of lorries, squeezed and jostled by stampedes of cars, careless of laws, rights, needs, custom, manners, or even sense.  The medieval towers, and gastronomic glories beckon, but I must keep on.  I cannot stoop yet.  I am sleepy, and there is a tension in my temples from the strains and vibrations of long-distance driving on a bike designed for the dirt track and sport rather than the rigours of the grand tour.  I take the road to , but I have lost the way I planned, the straight, fast, tunnelled, zip wire road that pierces the mountains.  The one I find myself on, eventually, with no map in front of me, no sat-nav (a device so far in the future the Pope hadn’t got one) is the Strada Statale Number 65, not even the old main road to ; this is the longest, windiest, most convoluted, cusséd, switchback road ever constructed.  Had I stopped for a moment and consulted a map, there is no way I would have even contemplated this route, but the sign said “” and I obeyed.

It is now overcast and clouds build and descend to meet me as I climb into the . To start with, I share the valley with the railway line, which reassures me that this must be OK, but after Pianoro, the track dives into a hole in the ground and I see it no more.  And the curves begin.  And the curves become bends.  And the bends become twists.  A sign says, “Serie di Curve,” and the series is never-ending.  At Loiano I reach 714 metres above sea level, and begin to feel the cold.  I stop and restore myself with a tiny black coffee, loaded with sugar, and a tiny shot of grappa, as if I were about to go off piste.

There is now no sky above, only cloud around.  I am like a fighter pilot (“I know that I shall meet my fate”) sheltering from the enemy in hostile elements.  Oh this is fun, I try to convince myself, and I rattle on, turning and turning in widening gyres.  At the Passo di Raticosa I reach 958 metres above sea level.  The air seems thin, and weak and grey, and my bones begin to feel the chill.  I stop for a tiny black coffee, three spoons of sugar and a shot of grappa, to revive my flagging spirit.

At La Casetta the road splits, and the sign to directs me onto the Number 503 to Firenzuola, descending through steep twists to 422 metres.  Still fifty kilometres to !  Coffee.  Sugar.  Grappa.  It’s beginning to get dark, or is that my eyes?  The clouds intensify, thickening like soup and I rise again to 882 metres at Rifredo, which seems an apt name to me.  I can hardly see the road signs, hardly see the road.  It is as if no one at all has ever been here before nor heard of it.  It is a dark wood, and I find myself lost, a paradox of twists that confuses me further.  Who could have made a road here?  Why?

My teeth chatter if I don’t grind them; my hands are raw inside their wet gloves; my shoulders ache and every so often I have to stand on the footrests to relieve the pain of sitting, bumping on the saddle.  The road enters a wood, gloomily visible as vertical stripes in the dark grey mist, and I begin to hallucinate – I glimpse a light-footed leopard, then a raging lion, trembling the air, and a she-wolf…..  Then, as I begin, finally, to descend from the mountains, a shade appears, the shape of an old man, wrapped in silence.  I appeal to him to take pity on me, the snarl of the motor drowning my words.

I am there still.

Despite all the good things I encountered, I prowl those winding roads in my dreams, some half a lifetime later.  Cold to my heart, lost in the wilderness, hopeless and without direction, immersed in the harsh, wild, rugged wood.